Time to fly through Dayton and slug through Louisville, places 39 and 40 on my list. I find appropriate uses for my horn, my sleeping pad and my socket wrench. 🙂

After my wonderful Parkersburg experience, I crossed back over into eastern Ohio. Dayton, on the other end of the state, would be my next stop. Daylight was running out and I headed towards a free campsite on the Muskingum River. On the way, I had my closest call, traffic-wise, of the whole trip.

It was a regular 4-way stop. I pulled up, waiting to go straight across. Two cars travelling perpendicular to me went through the intersection, meaning that it was my turn. I began to pull forward. Fortunately, I never trust an intersection.

A pickup hauling a flatbed trailer, approaching the intersection to my right, caught my eye. He was rolling pretty steadily for someone who was about to stop. I hit my brakes, stopping about 5 feet in front of the stop line and waited to see what he was going to do.

He rolled right through the sign, and began turning left. I initially didn’t think much of it, just that he was being inconsiderate. No big deal. But as he began to cut his turn sharply, I was suddenly in his path. He did not see me. Being that he had rolled through the sign, he already had some decent speed.

Less than a second before impact, my thumb found the horn. His eyes got as big as saucers and he jerked the wheel to the right. Even still, the trailer just missed my front wheel. 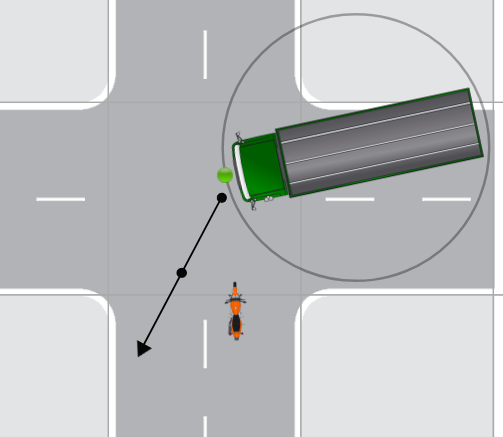 As harrowing as the experience was. It made me thankful for all of the safe miles behind me. Though I doubt I would have been seriously hurt in this collision, I’m glad I caught the horn on the first try. The button on a motorcycle isn’t huge and missing it, even for a tenth of a second, could have been costly.

I had a quiet, damp night.

I would have liked to linger in my tent in the morning to let it dry out. Unfortunately, I had not secured enough fresh water the previous evening, which sort of required me to pack up and get on the road.

This was one of the most uninspiring days of my trip. I spent an ample amount of time at a library near Columbus, Ohio. I proceeded west and got to my next place, Dayton, with just a bit of daylight left.

I had found a free campsite online, which apparently required a permit. I called the number multiple times to obtain one, but their office was closed for the weekend. I decided to go by and check it out.

There was only one other group at the campsite and I asked them about the permit process. I told them that I was going to try camping there, but would move if the authorities asked me to. They were not impolite, but it did not appear that they agreed with the decision. An invitation to roast marshmallows seemed very unlikely.

It was another calm night.

I was up before sunrise, wanting to get some good pictures at first light in Dayton. I set my sights for the downtown area. They have a nice area along the Miami River. 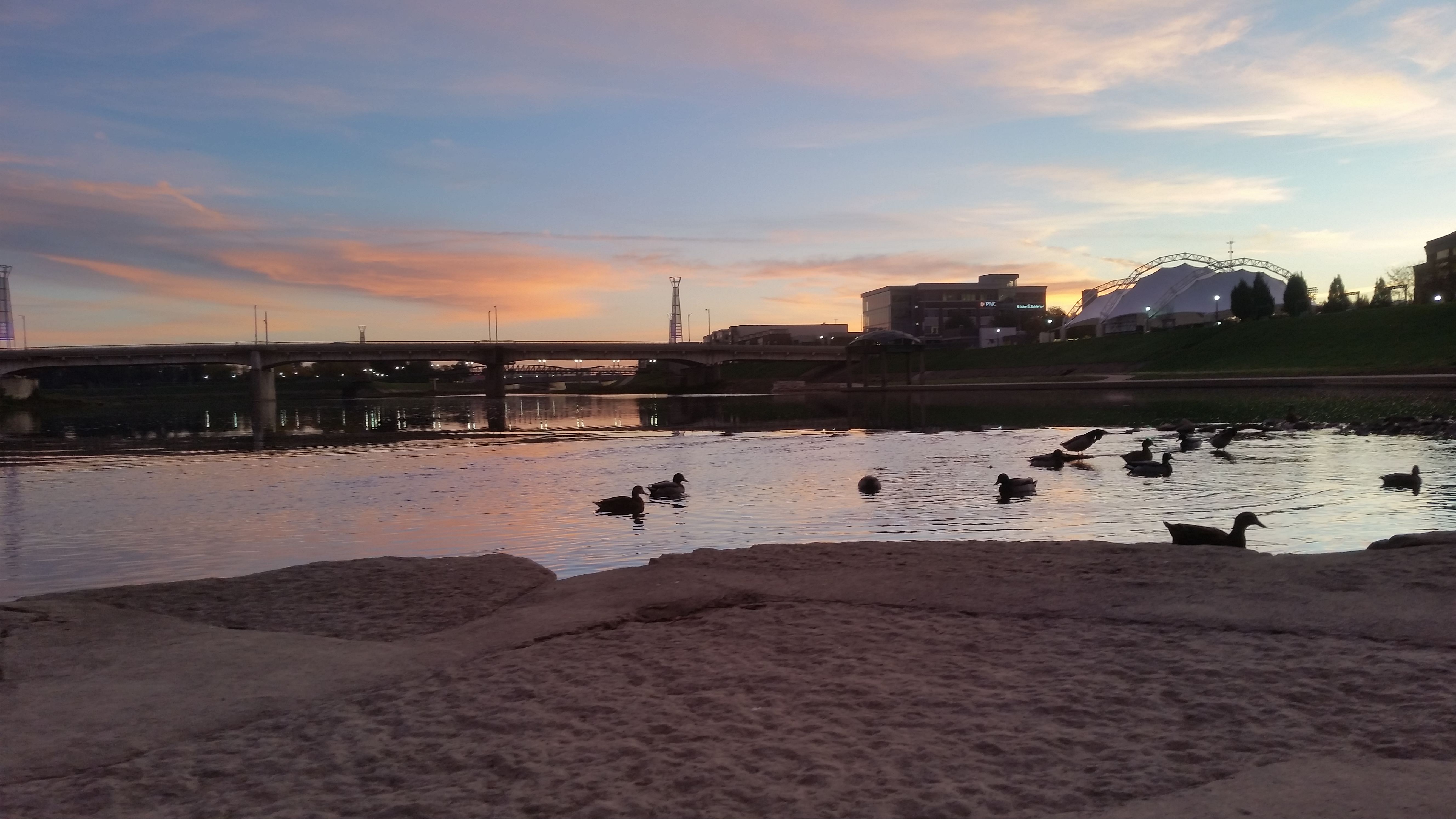 I was holding a pleasant conversation with these ducks, asking them about how their morning was going, until I noticed someone watching me. I continued my conversation at a more reasonable volume.

I knew that the picture to represent Dayton should have something to do with flight. I thought a possible location might be the National Museum of the Air Force. I had emailed them about possibly getting a motorcycle into a hangar for a quick shot, but that was dismissed.

Dayton was home to the Wright Brothers and I found a great picture of a sculpture that represented them well. It was also great that it was early enough that no one was around. 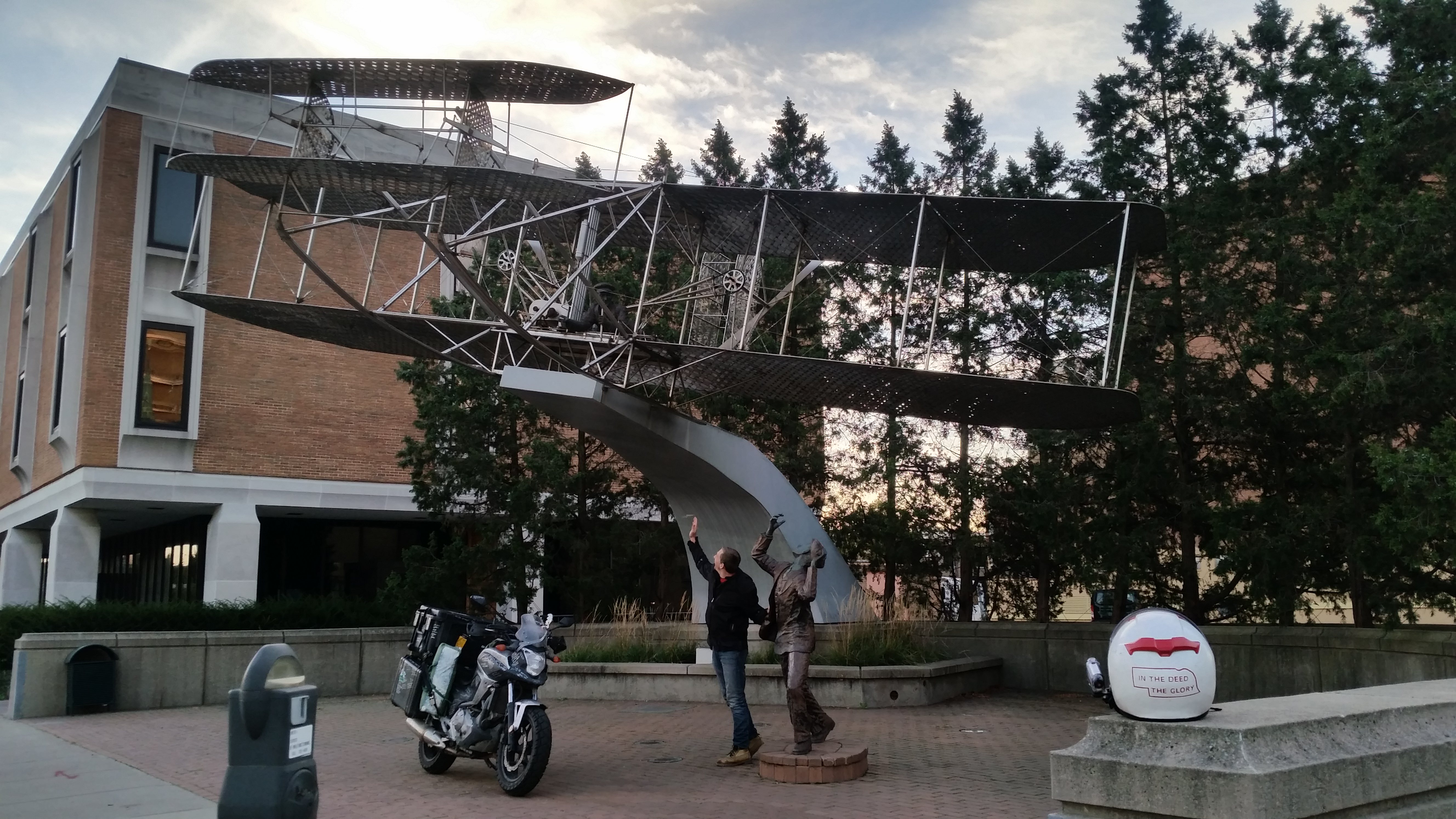 This is a reproduction of the Wright Flyer III, which the brothers considered their most important plane.

I explored the town and got some more pictures.

Annie is a ray of #sunshine. #everywhereman

Home of the Flyers: 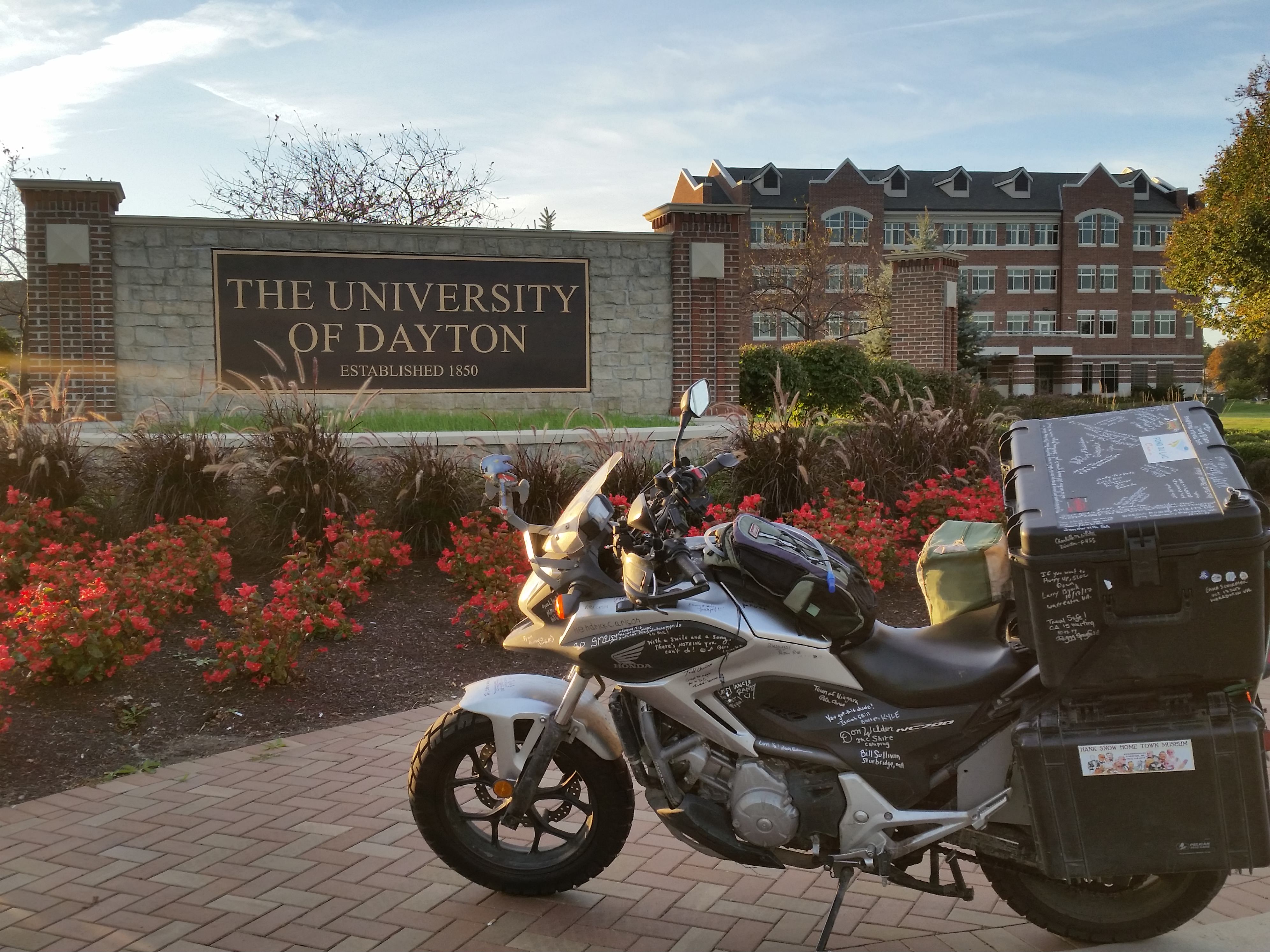 I found a park that had a handicap porta-pottie. These are ideal places for baby-wipe showers. I got cleaned up and contemplated my next move.

I felt like going to church but I did not feel like talking to anyone (not an uncommon feeling for me 🙂  ). I found a large church north of town that seemed to fit the bill. It was perfect. The service was nice and I only had to say “good morning” twice and have one person say “see you later” afterwards. Cool.

After church, the Air Force Museum was open. Not only did the potential sights excite me, the price did as well. It is free! Be still my miserly heart! 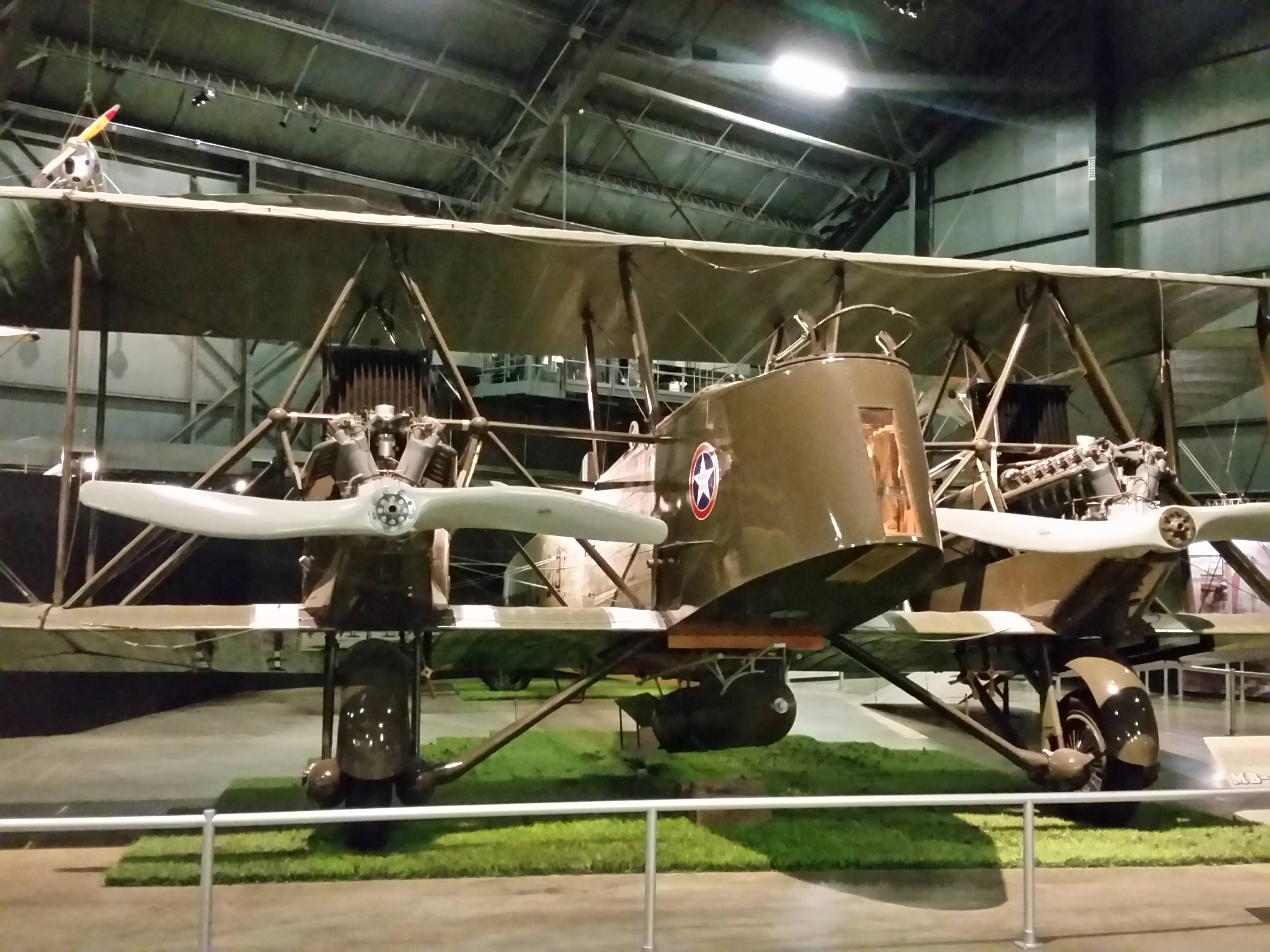 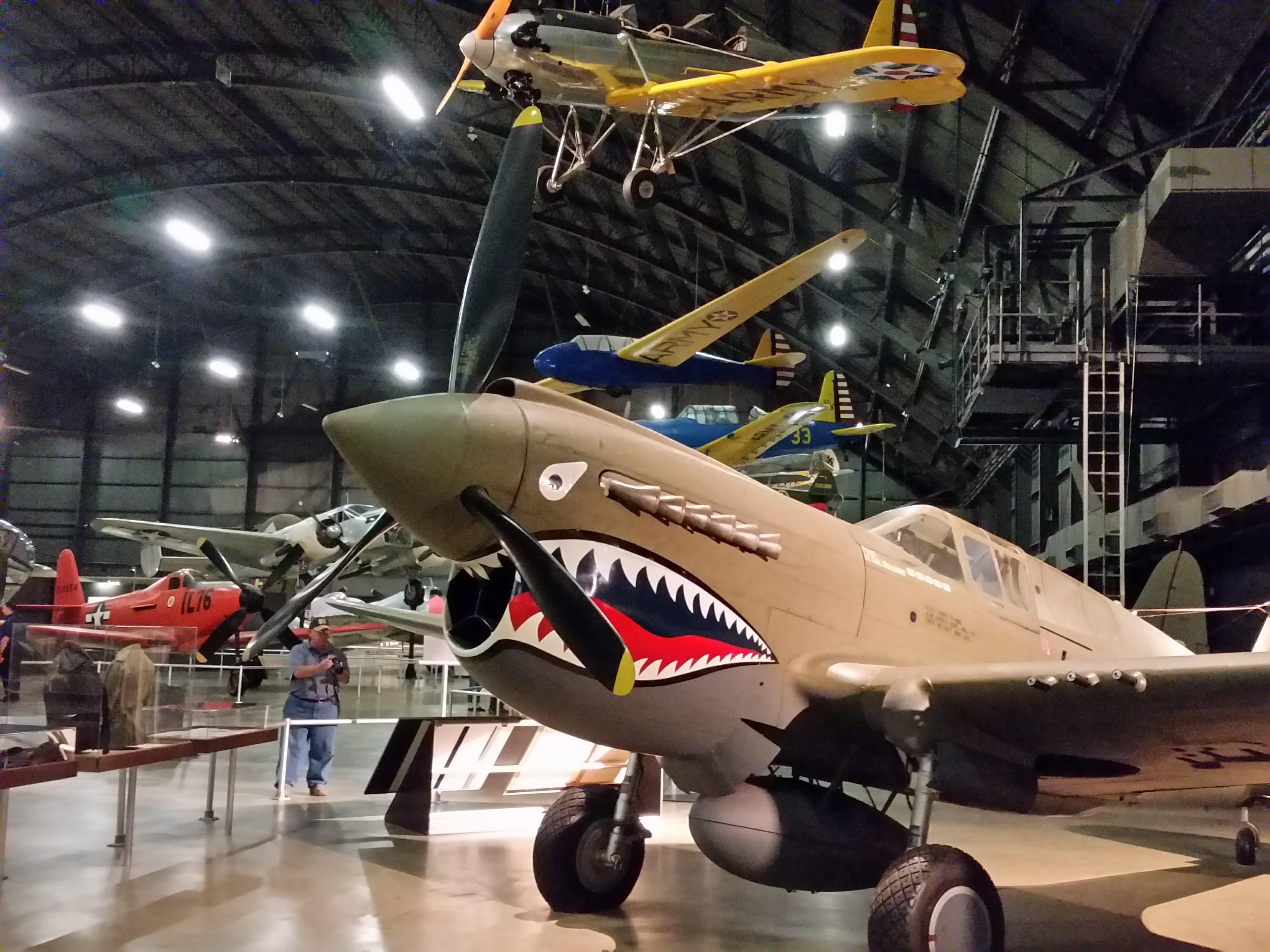 The Cushman Airborne, made in Lincoln, Nebraska: 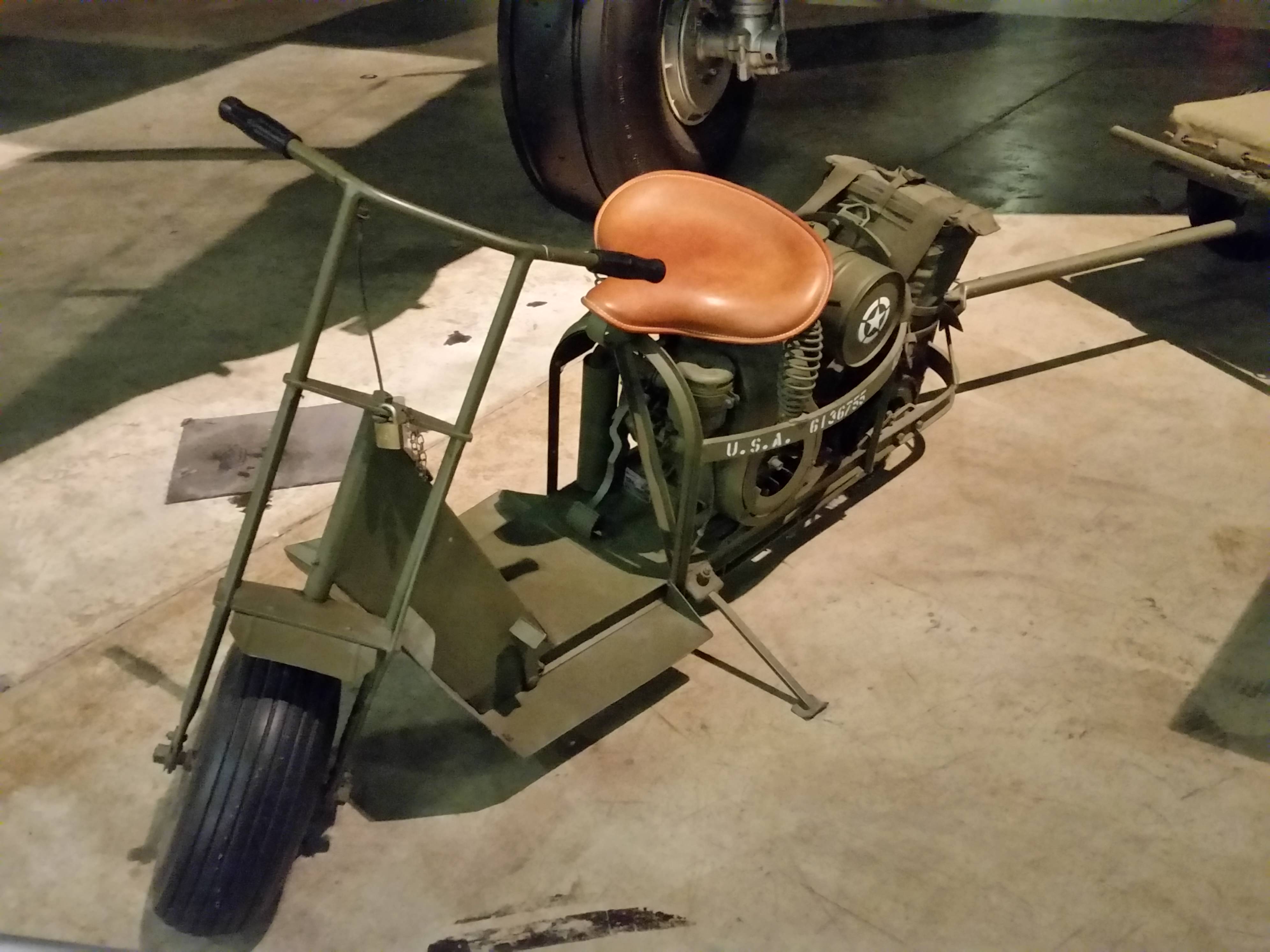 Have you ever wondered what other names I was considering for Annie? 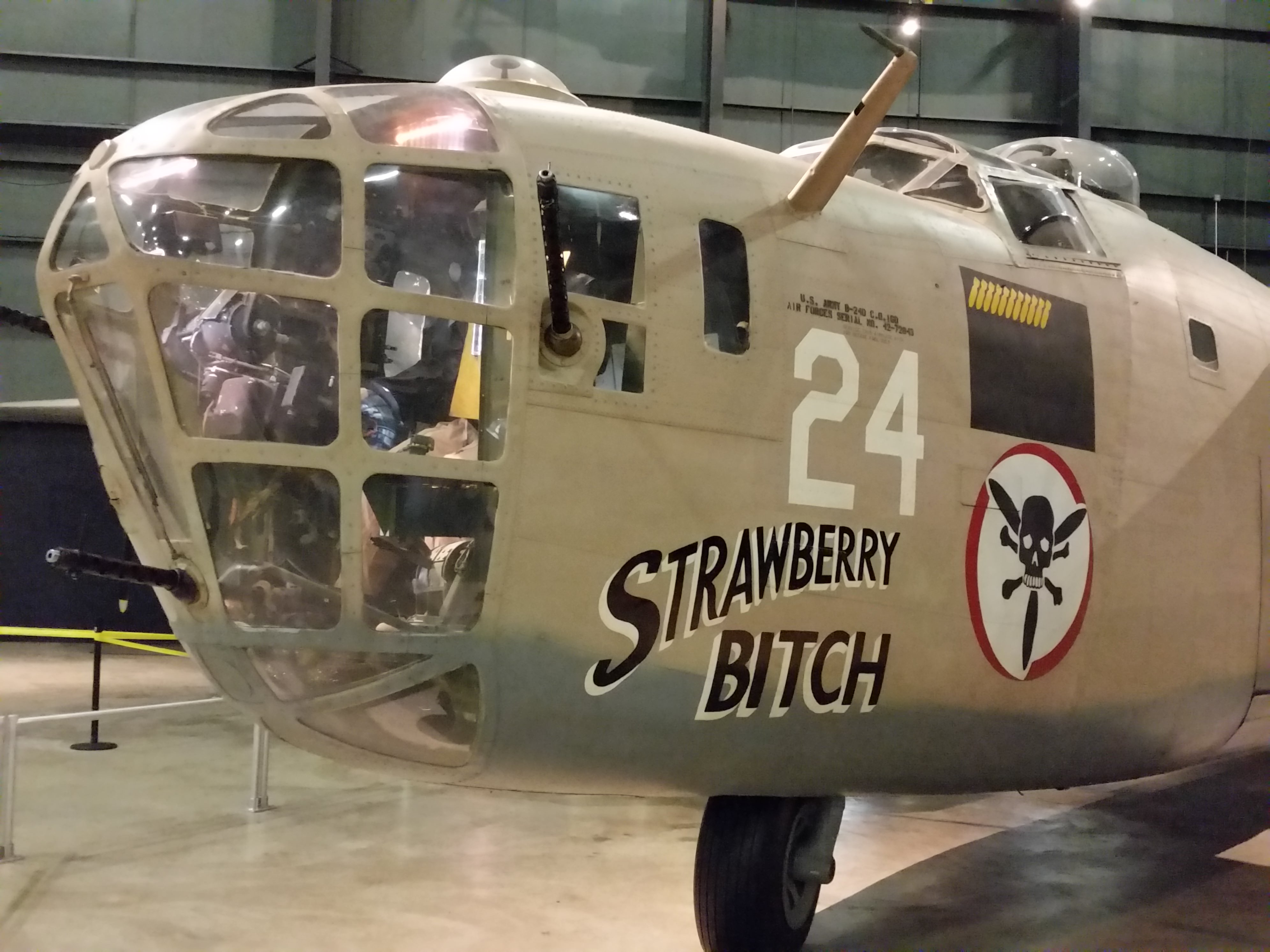 I think Annie is probably better. 🙂

Also on display is Bockscar, the plane that ended WWII. Thankfully, this is still the last plane to attack with a nuclear weapon. I sincerely hope that this fact continues to remain true. It was actually made in Bellvue, Nebraska. A reproduction of “Fat Man,” the bomb dropped on Nagasaki, sits next to it. 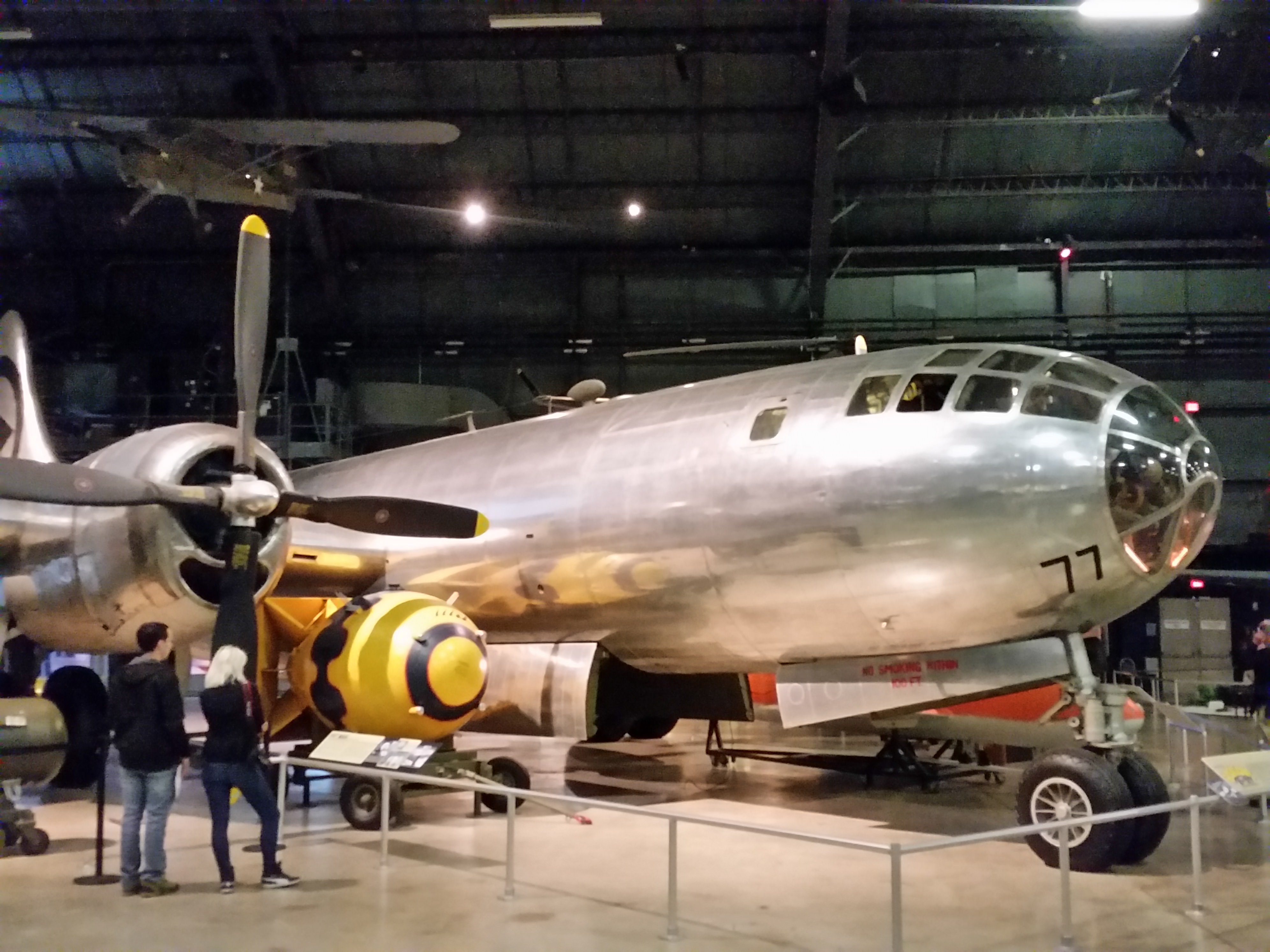 There are also lots of modern and experimental aircraft: 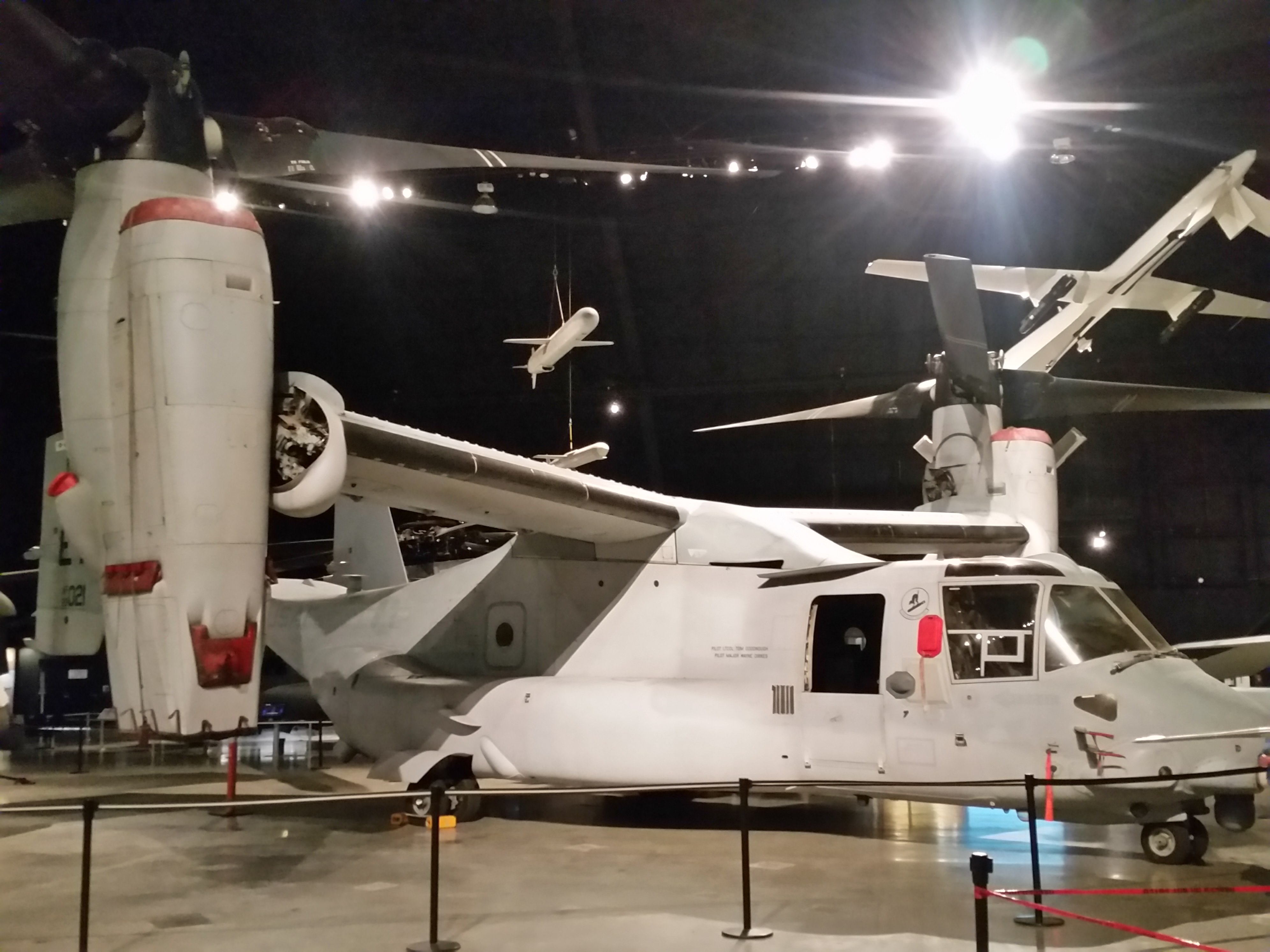 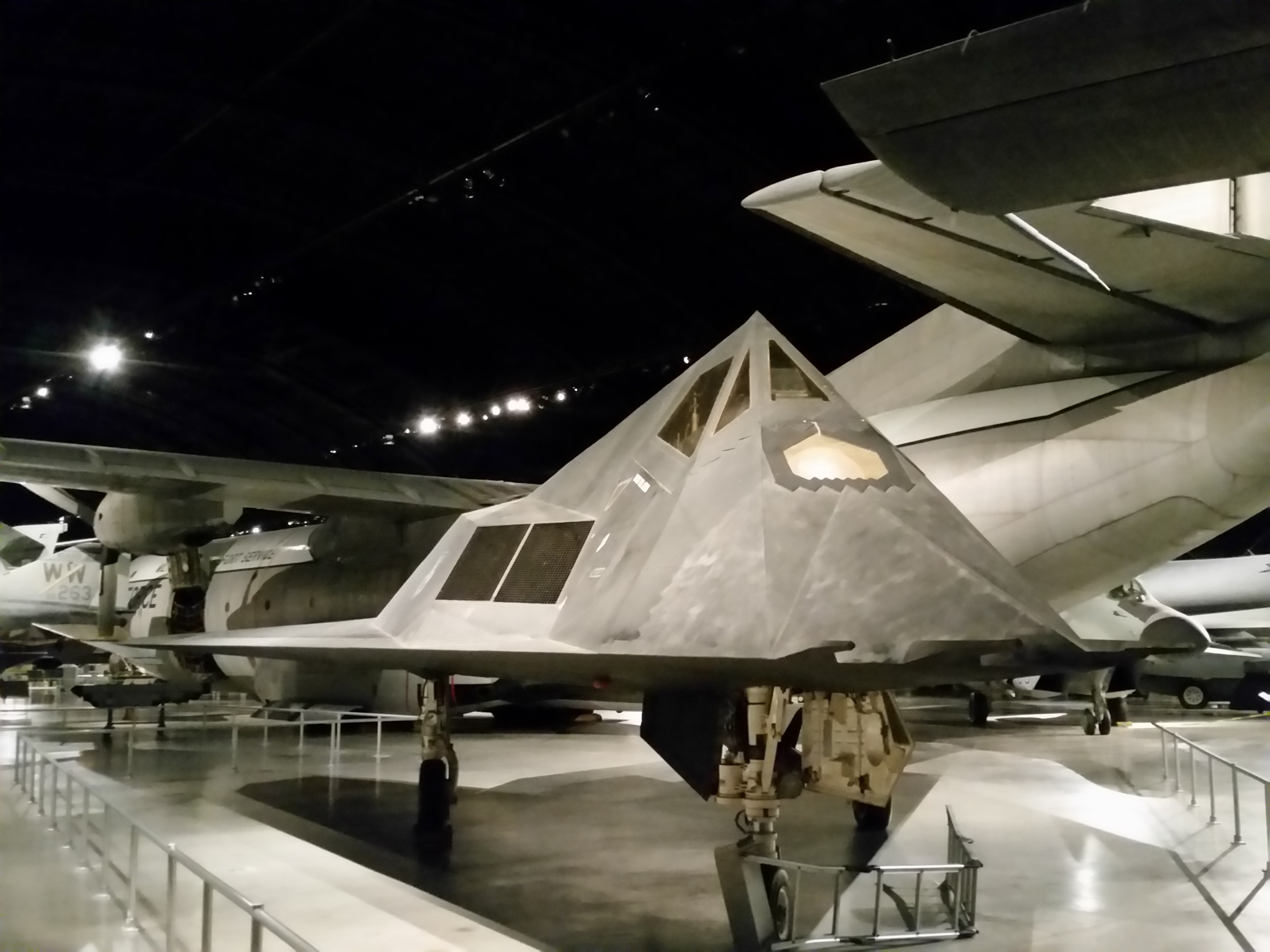 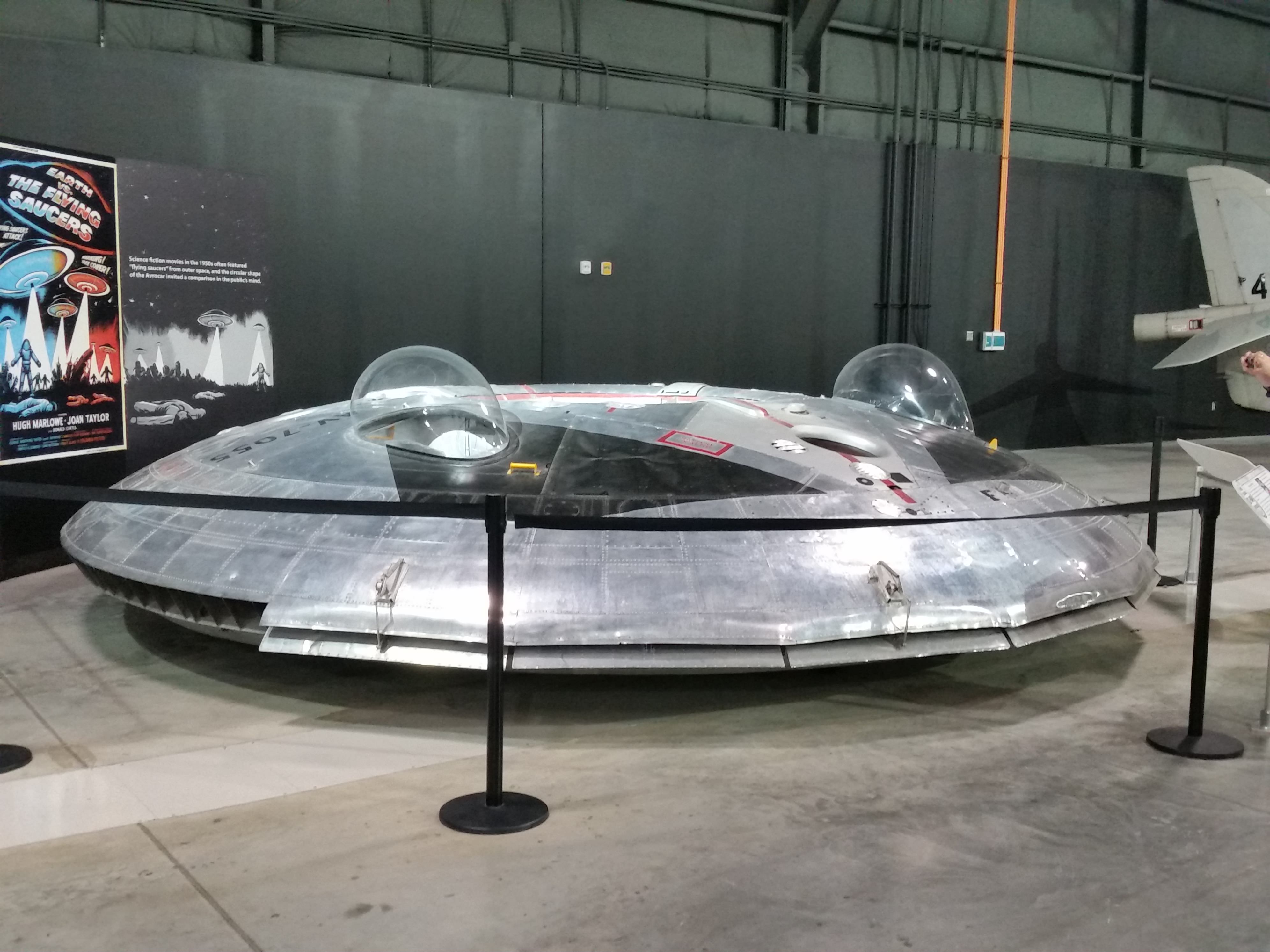 There are also multiple planes which were used as Air Force One on display. Most notable is SAM 2600. It was in service for 36 years, from Kennedy to Clinton. 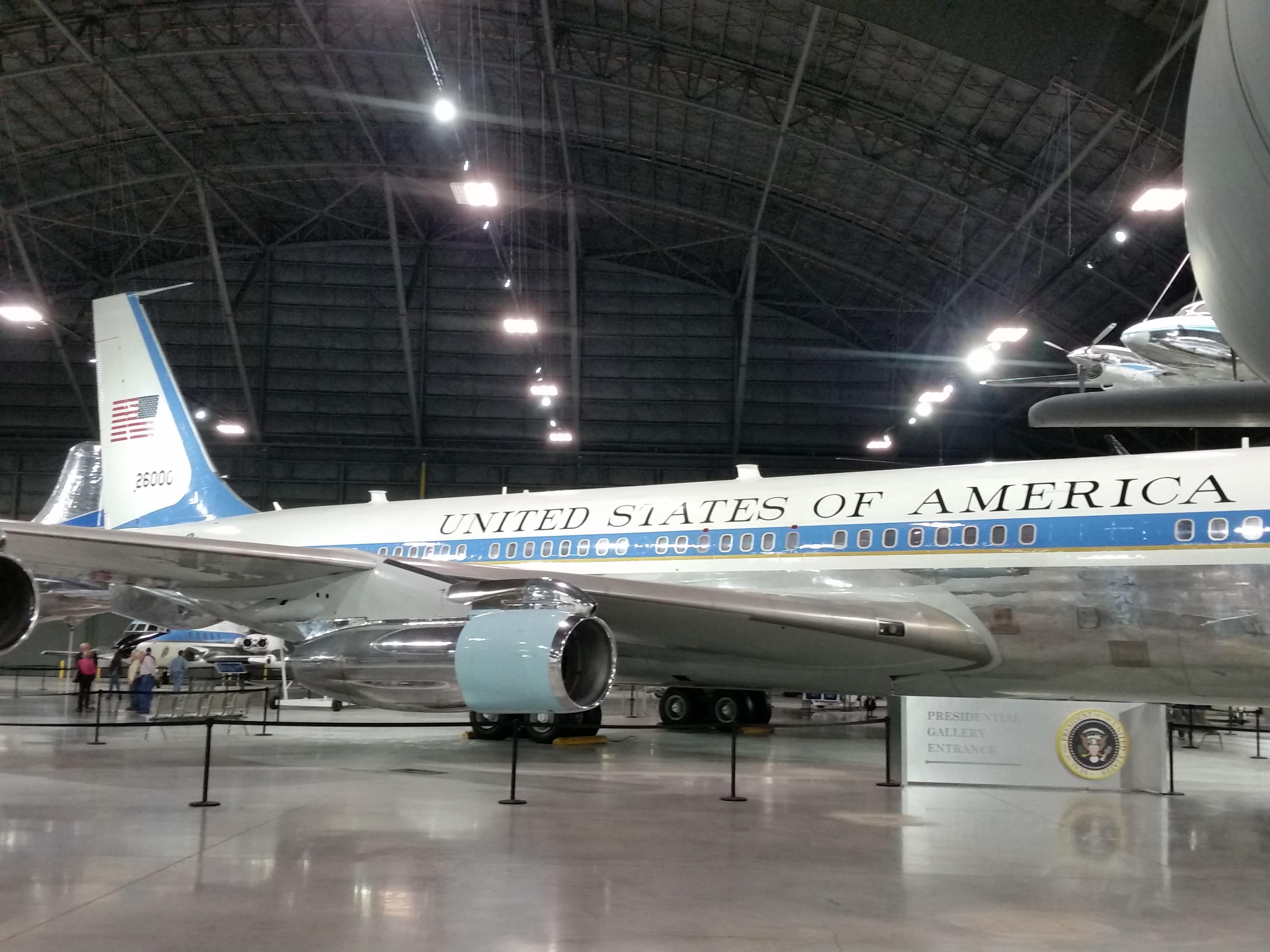 It was right here where President Johnson was sworn in following the Kennedy assassination. I can scarcely imagine a vehicle with more history than this one. 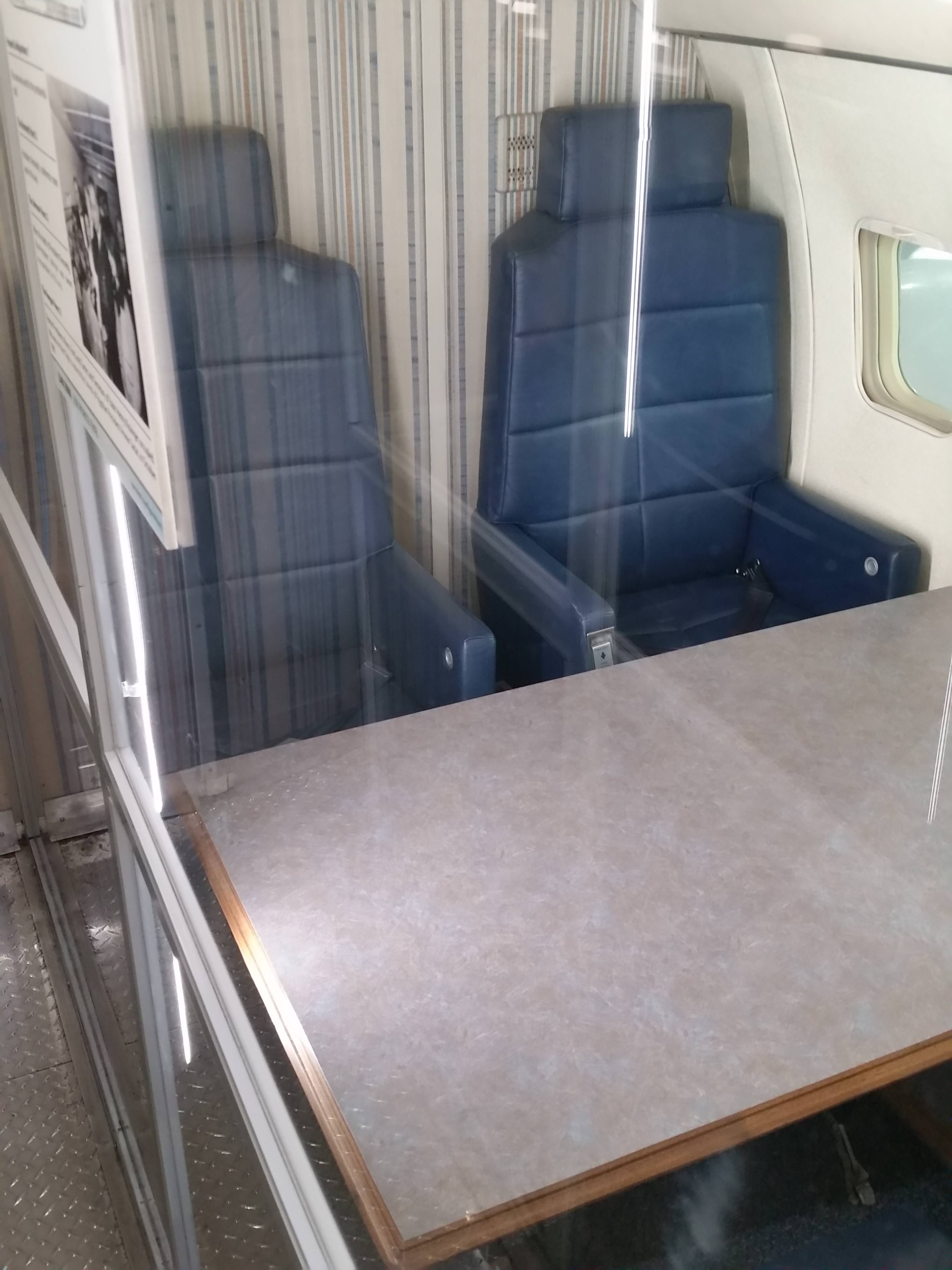 This museum is outstanding. To read each description would take days. I could easily come back.

I met a nice couple from Dayton who were examining Annie when I came out. It was nice to connect with them, as I had not met many locals. They even demonstrated considerable restraint, refraining from writing “Go Bucks” on Annie. 🙂

I began to make my way towards Louisville, the next song stop. Rain was a guarantee for the next day, so I wanted to be close to the city when I set up camp. I stayed on the freeway to make up some time, but eventually hopped off once I was closer to Louisville. I was glad that I did!

I was pushing daylight a little bit and had to settle for a less than ideal spot off of a carpool parking area. It was really tall grass and had no overhead tree cover. 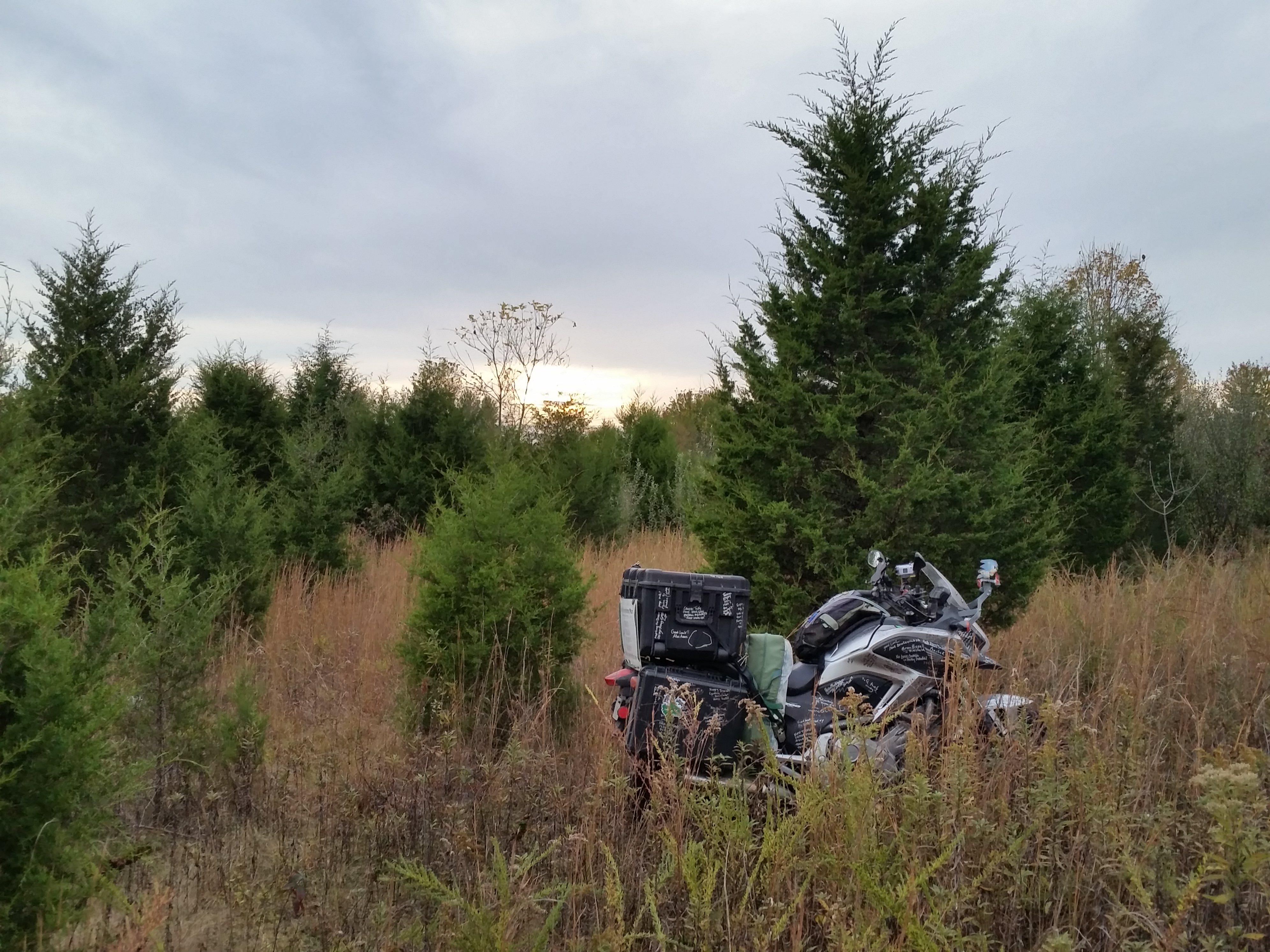 It was super secluded though and I had I-71 close enough to sing me a freeway lullaby.

I had made a mis-stake. Yes, that hyphen is intentional. I had neglected to put in one of the stakes that keeps my rain fly off of the mesh of the tent. Without this, the water just sort of seeps in.

I woke up. Cold, wet and miserable.

Working around my interior ponds, I made some coffee and did some work in the tent. I was reluctant to begin fighting the elements. A nearby library did not open until 10, so I lingered until near that time. I decided to leave my tent set up, figuring I would return to it in the evening.

I began riding in that direction. Cold, wet and miserable. 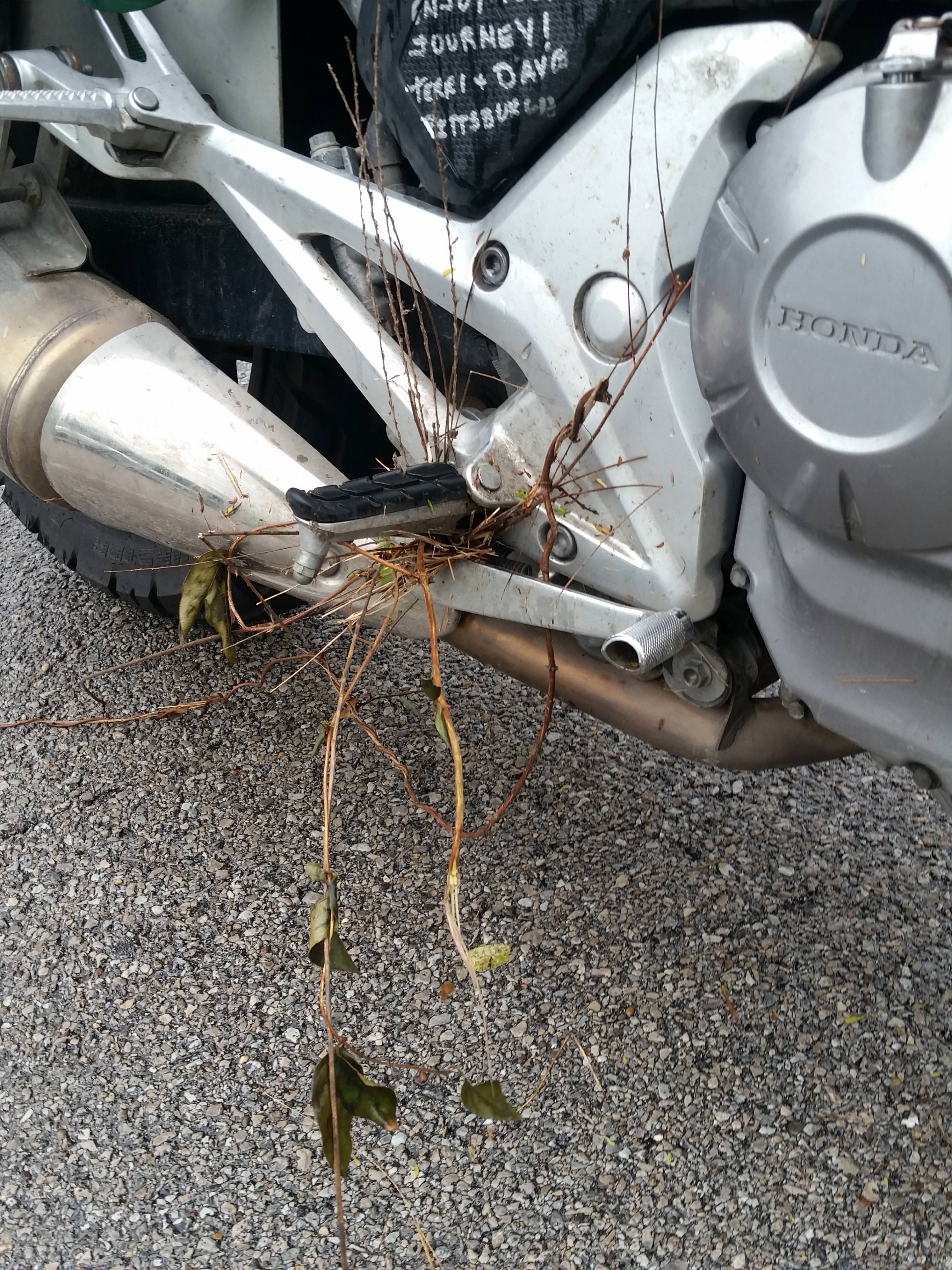 I got to the library. Still cold, wet and…oh, that’s nice! I’m a little less miserable!

The source of my misery relief was a message from a guy named Brent from the ADVrider website. He lives in Louisville and offered me a place to stay for the night. I told him that was not necessary since I already had sufficient accommodations. (Yeah, right) We planned to meet up in the evening.

I was at the library until around 4, at which time I returned to my site to pack up my tent. It turns out that I had hidden a little too well. I almost dumped Annie when I went down the wrong gap of trees and got hung up in a muddy section. Ahhhh, the joys of stealth camping. 🙂

I eventually found my tent, packed everything up and proceeded into the city.

I met Brent at his house which is across the Ohio River in Indiana. I got to meet his family and we began to chat. Brent has taken some time off of riding, but has decided to take it up again. His plan is to get an NC700X when the 2018 models are released. Great choice! 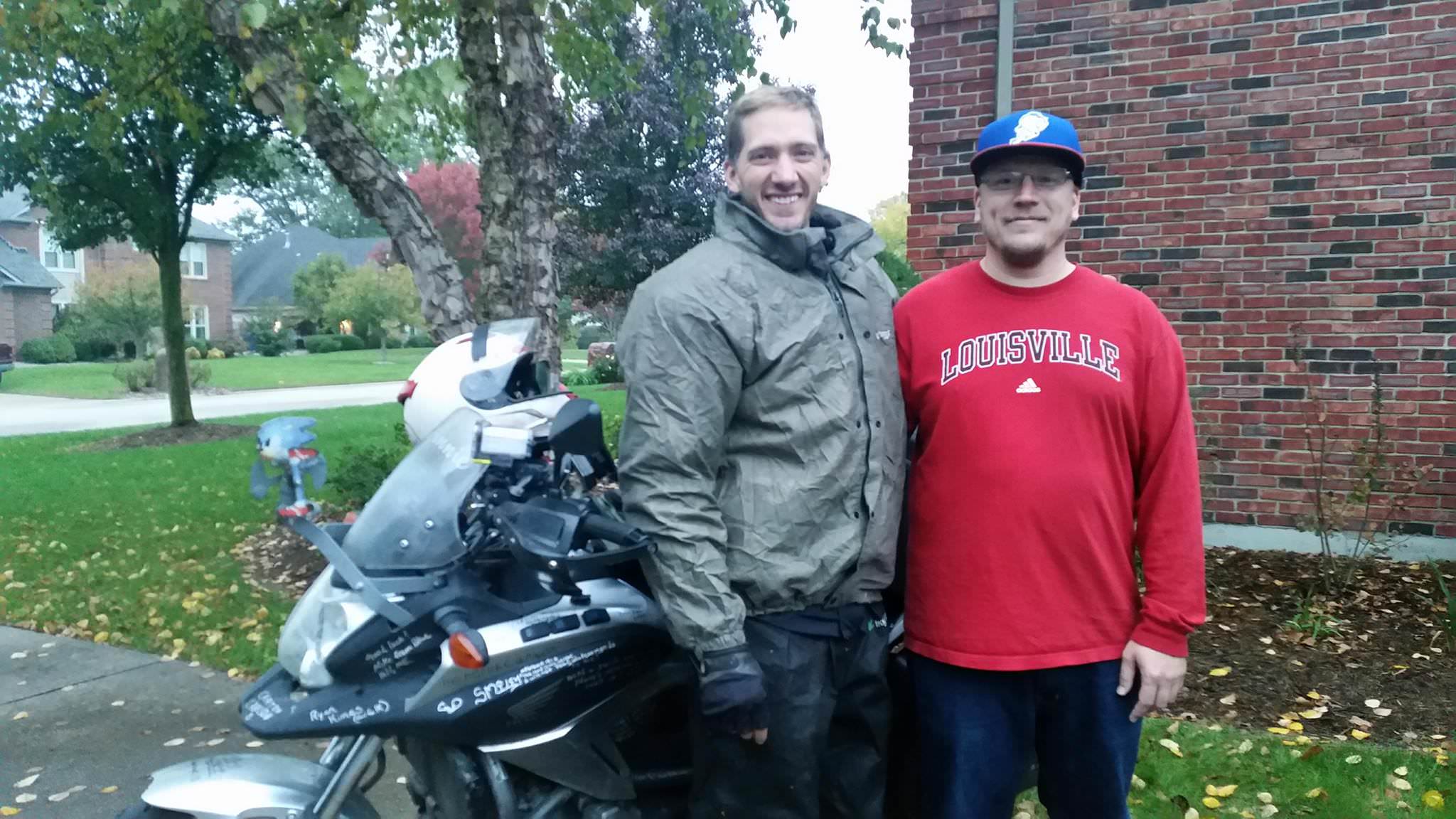 One of my first questions to him was how to say his town. The phonetic spelling he gave me was “Lul-vuhl.” I noticed later that it is much easier to say with a full mouth. It is all about keeping your tongue low!

Brent owns a rental property which currently has an open apartment. He apologized multiple times that it was unfurnished and unfancy, but I was infinitely grateful to be out of the cold, wet weather. We dropped Annie off and I rode with him to a local pizza place where more great conversation ensued.

We were unsure whether we would meet up the following day, so we took care of the signing ceremony after supper. 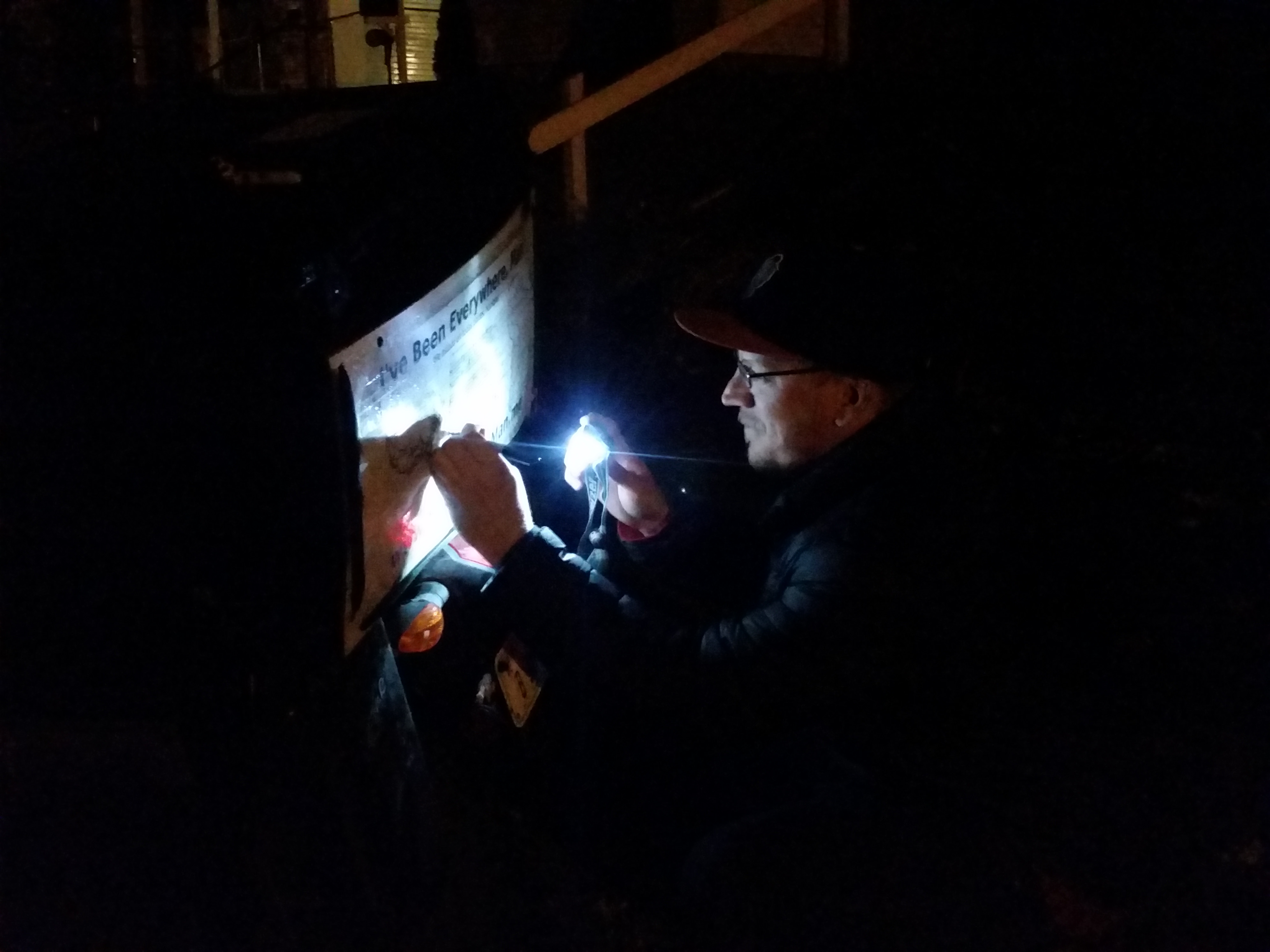 He gave Annie one of my favorite tattoos: 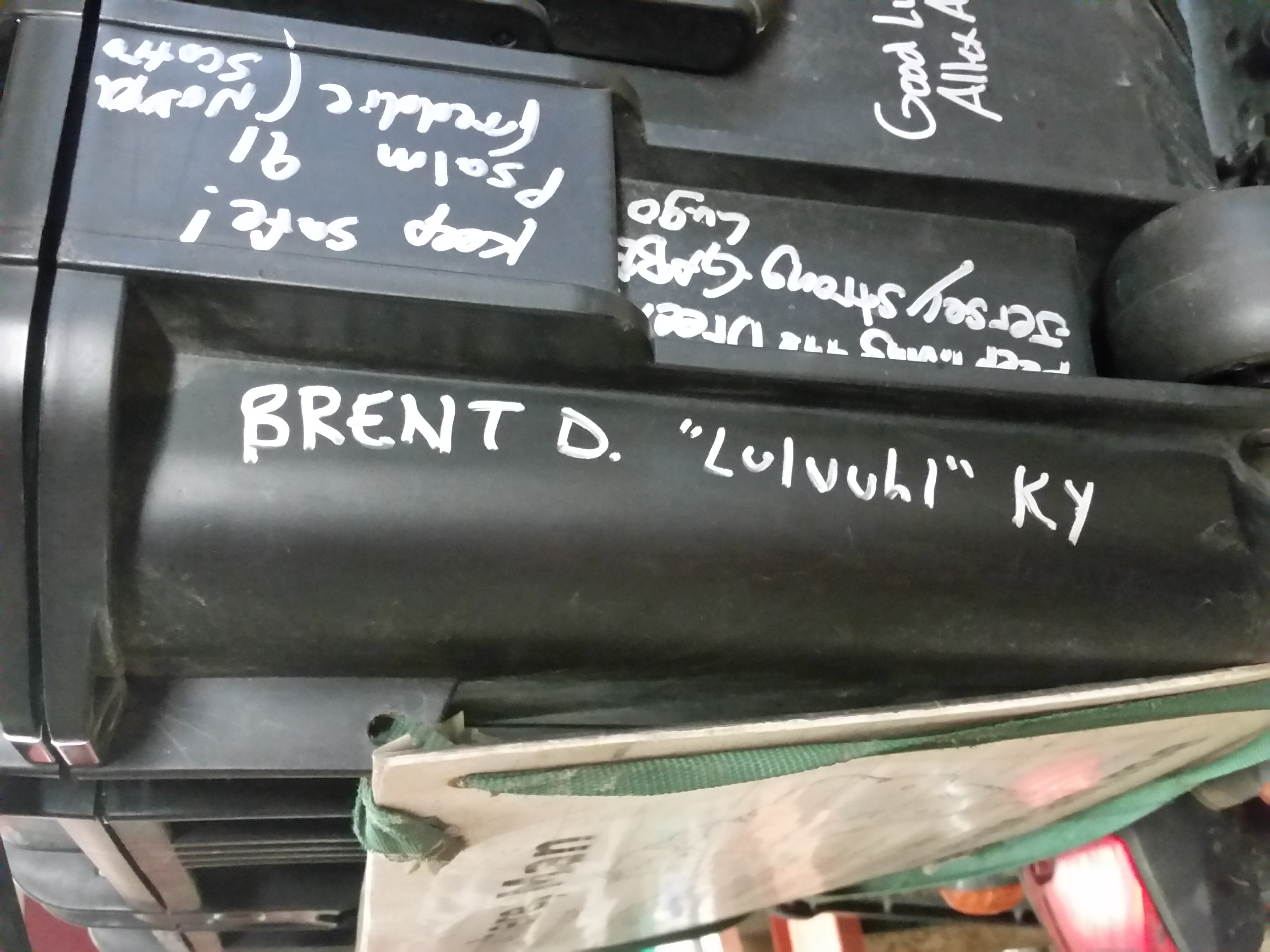 I shouldn’t forget how to say it now. 🙂

He also left me a bag of some random camping stuff to go through. 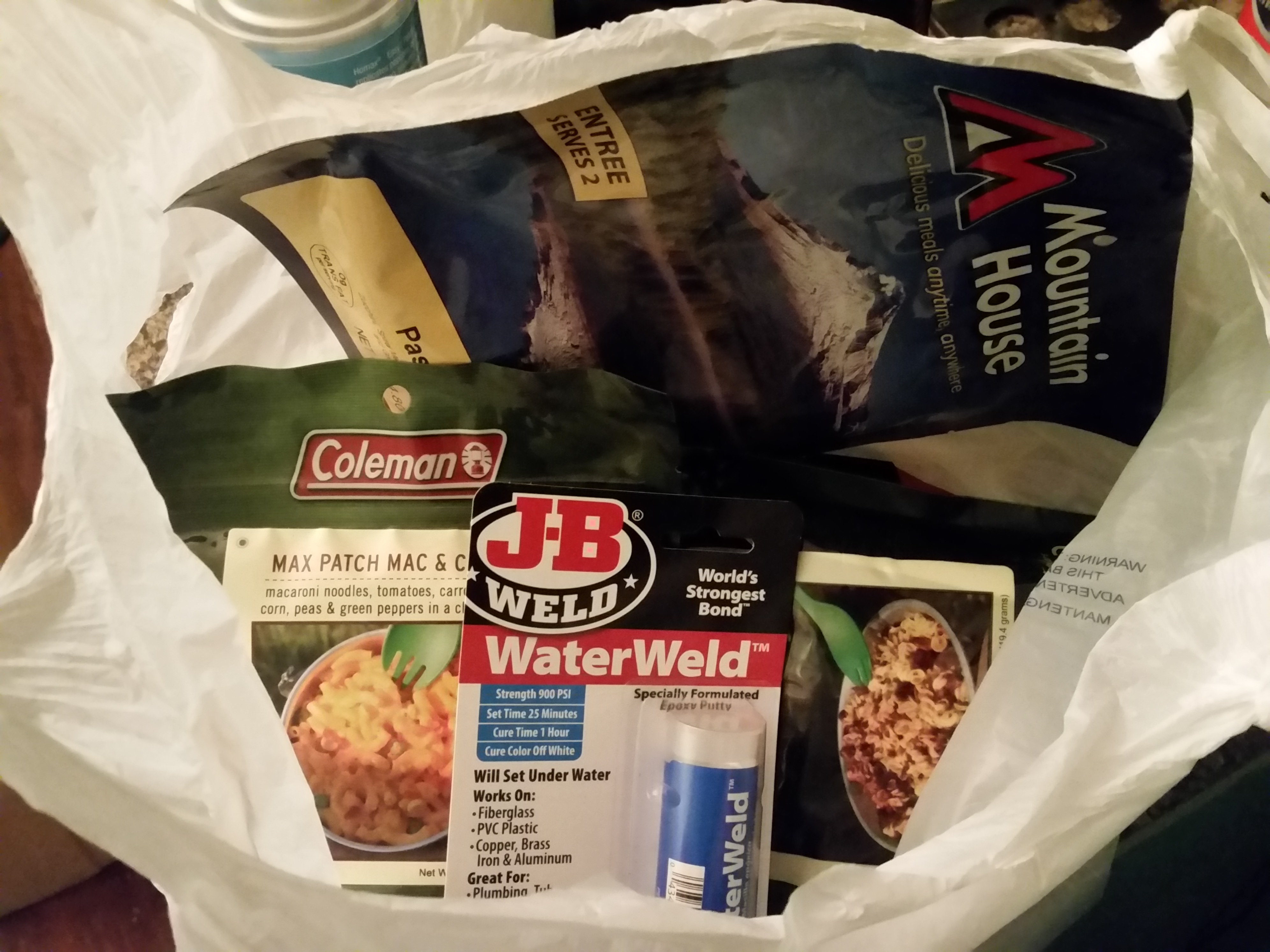 I took the MREs and a shooter of bourbon. When in Kentucky….

I woke up and everything was dry! The roof is an incredible invention!

I had a number of photos planned out for Louisville, so I got straight to work. First was a panorama from the Indiana side of the river that Brent had suggested: 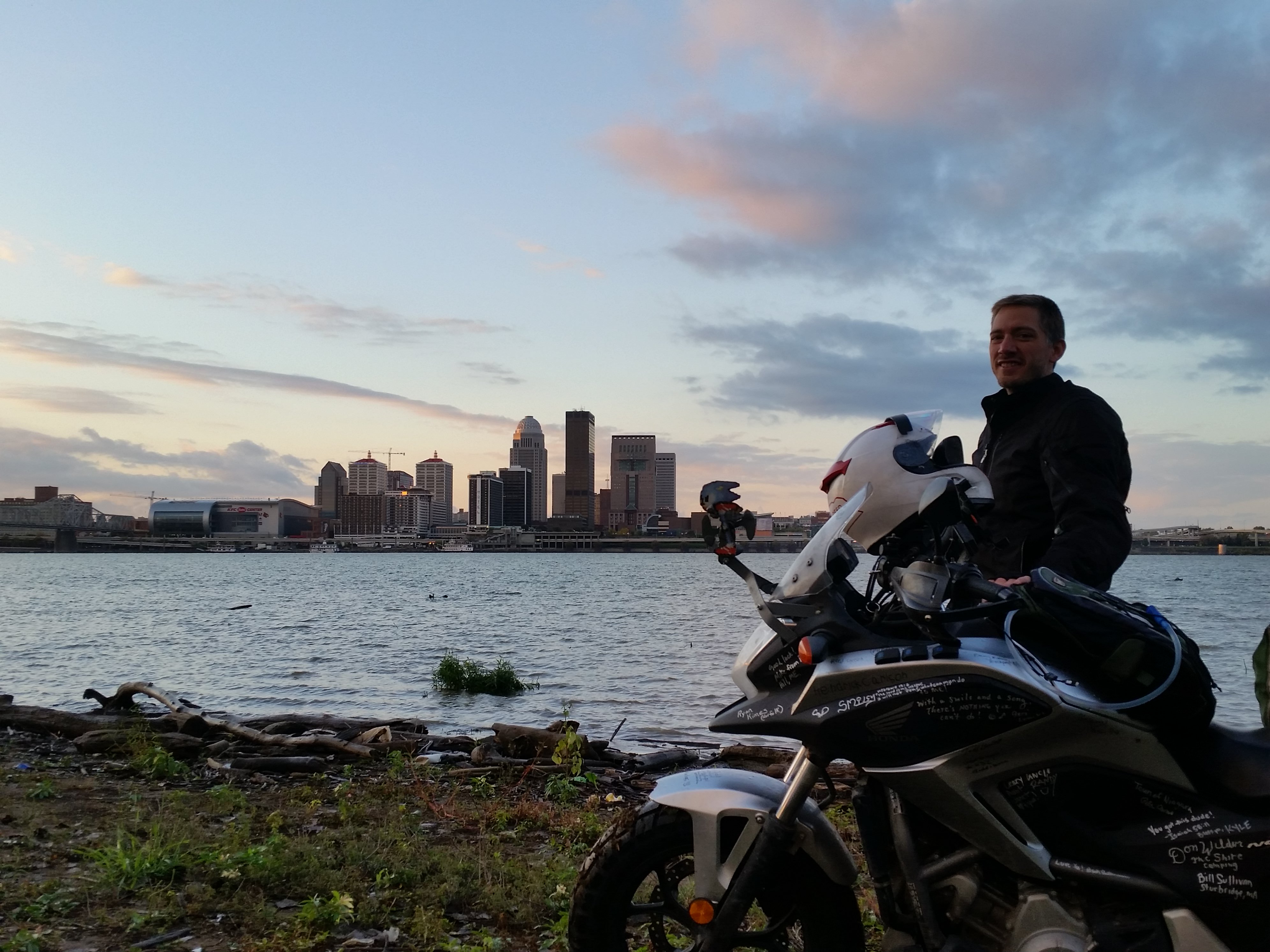 I had emailed the Louisville Slugger museum about getting my hands on a bat for a photo-op, but they did not respond. I guess my sleeping pad will have to work. Batter up: 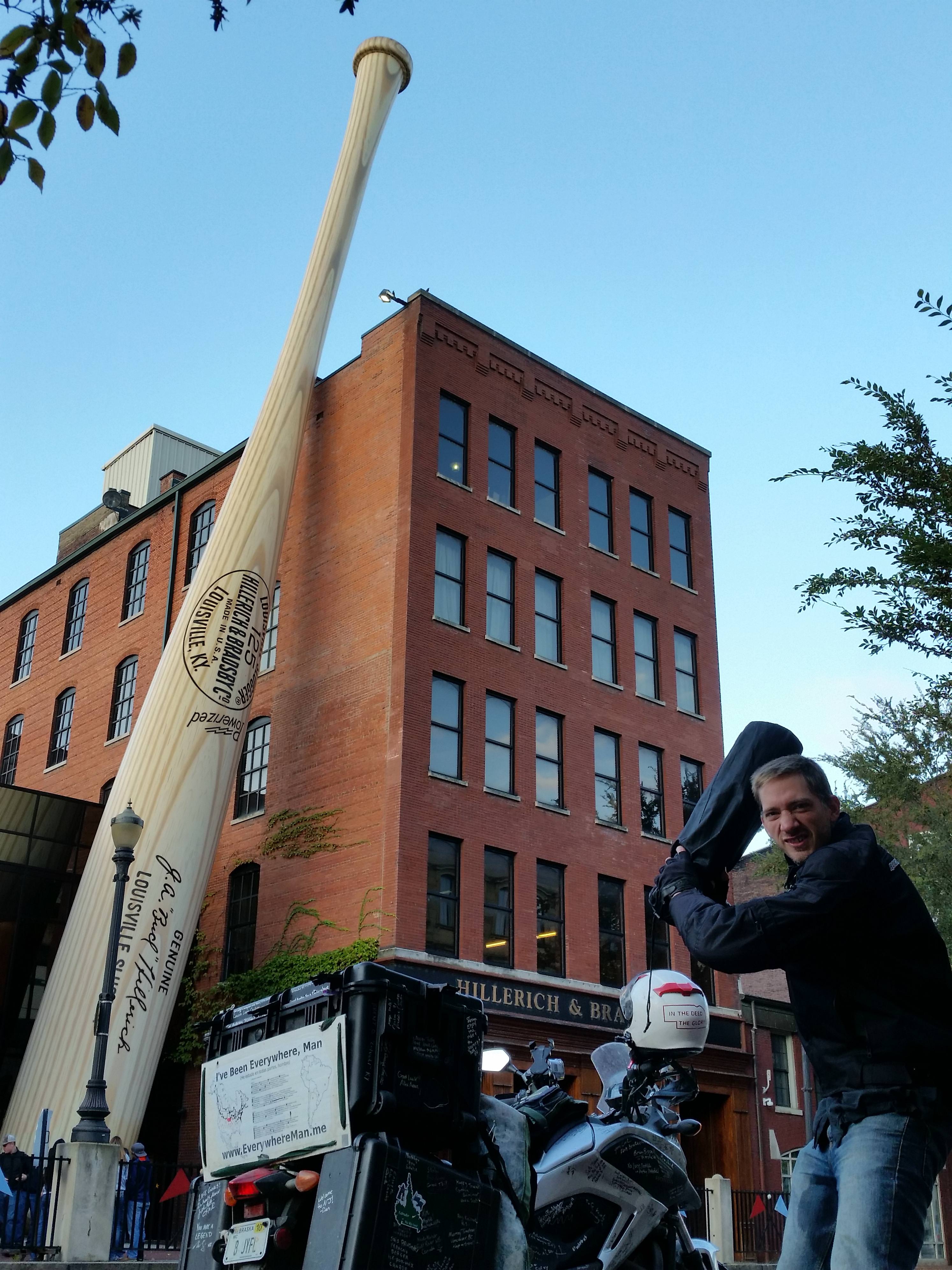 Next up was Churchill Downs, home of the Kentucky Derby. The parking lots were a mess with lots of construction, so this was the best place I could find for a photo. Giddyup, Annie! 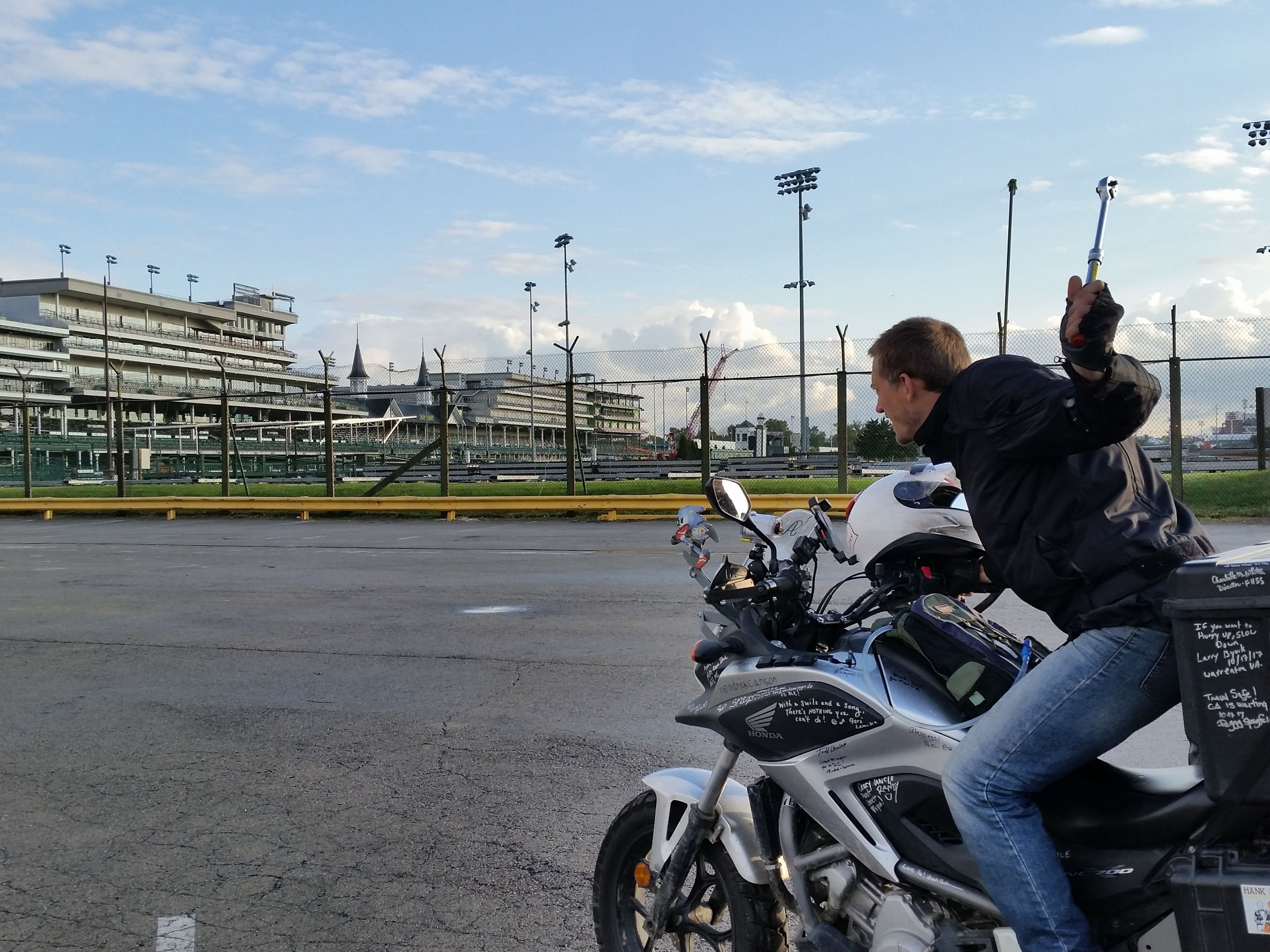 I did an hour or so of work before Brent and I decided to meet up again. He was visiting a Honda dealer, which was supposed to be releasing the details of the 2018 NC700X. We browsed around and talked about bikes for awhile. 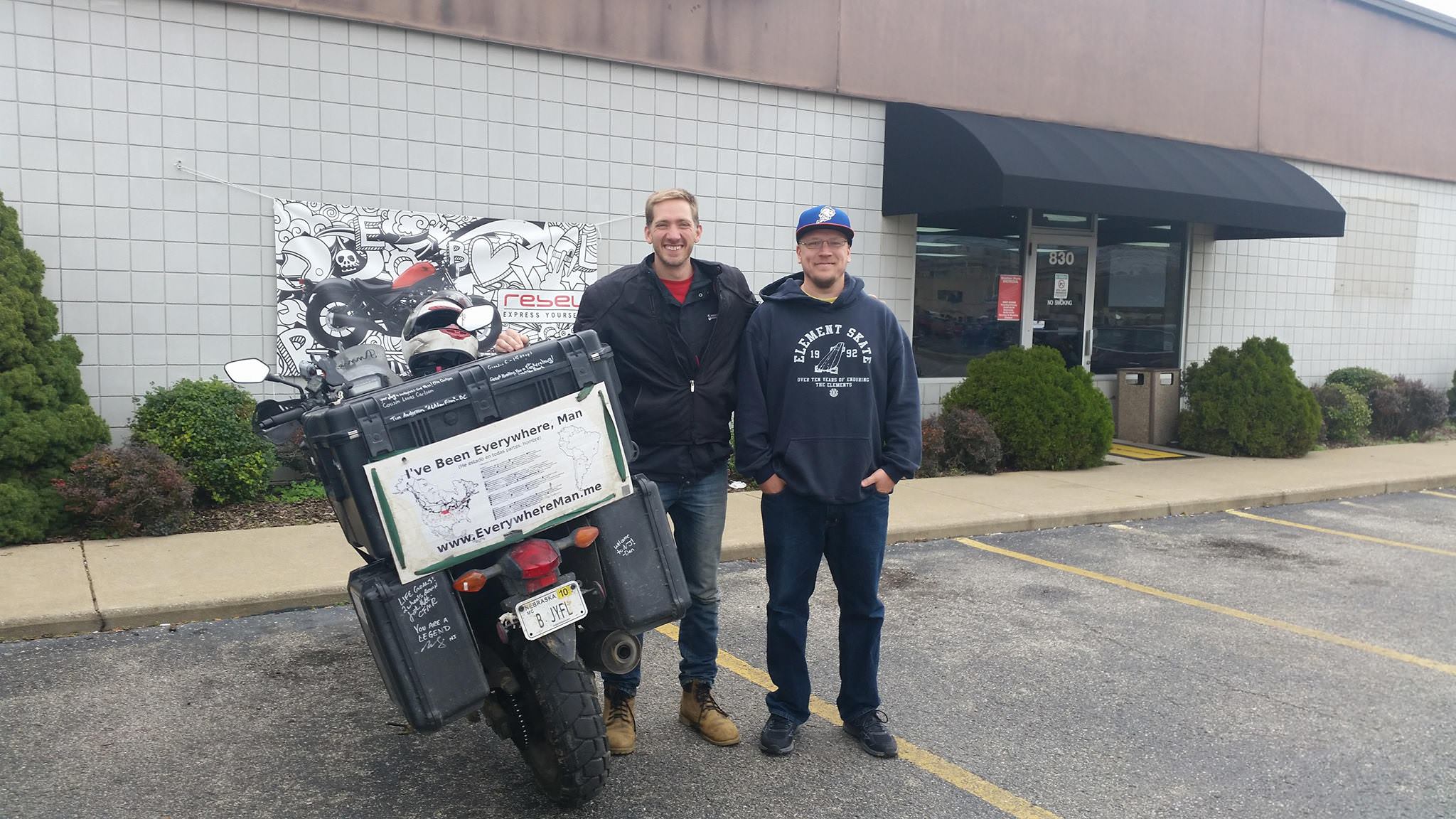 He offered to treat me to lunch at an Ethiopian restaurant downtown. The food was great! Brent and I got along really well, but there seemed to be a true look of hostility in his eyes when I tried to reach for the check after lunch. I graciously backed off. 🙂

Once again, here was a total stranger demonstrating unthinkable hospitality. The way he reached out to me really ensured that my time in Louisville was special. I hope we can take our NC700X’s on a ride together in the future!

Realtime update: I’ve been absolutely spoiled by multiple sources in Nashville. I’m leaving soon to go spend a couple of days in the Huntsville, AL area. Then I will finish up Jellico and Knoxville in Tennessee. All is still well! More great stories are coming!

6 thoughts on “Flyin’ and Sluggin’”