Reno, the first place mentioned in Verse 1, is up! This is a place with a fascinating history, bright future and a very hospitable family. In this post Sonic gets his legs back, I get one of my favorite pictures of my whole journey, and I refrain from shooting a man just to watch him die… I already visited Folsom Prison.

Route for the day:

My day would begin with a pleasant ride through the Sierra Nevada en route to my next song place, Reno, Nevada.

(I would like to cordially welcome back Sonic’s legs to this quality publication. He looked so sad without them.)

I passed through the Lake Tahoe area which, given the size of the resorts, must be a pretty big deal. I didn’t spend much time there, as I was focused on getting to Reno. 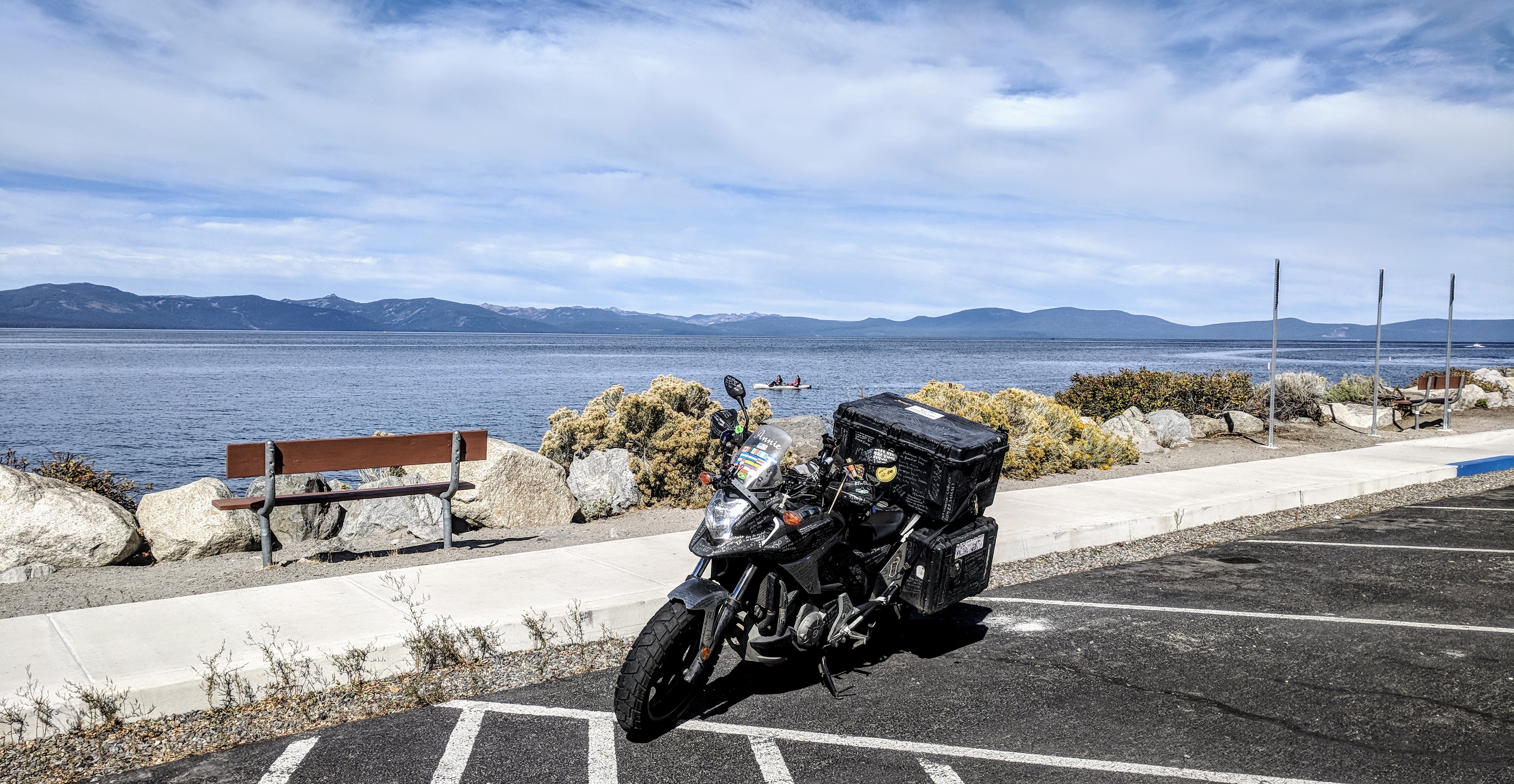 The first two locations mentioned in “I’ve Been Everywhere” are both in NW Nevada, Winnemucca (mentioned in the intro) and Reno (The first place in Verse 1). Oddly enough, they would be two of the final places on my circuitous route.

In my previous post, I visited Folsom Prison near Sacramento. This facility was immortalized through Johnny Cash’s song “Folsom Prison Blues.” In that song, the narrator gives his reason for winding up in Folsom Prison as, “I shot a man in Reno, just to watch him die.” Though this song is compelling, I think I made a good life choice by choosing to follow the path of “I’ve Been Everywhere” as opposed to “Folsom Prison Blues.” Next trip?….Probably not. 🙂

Potential homicide aside, there were many reasons for me to be excited about visiting Reno. Chief among them was that I would be getting to reconnect with some family. My cousin, Kent, and his family call Reno home. Though I hadn’t seen him in over twenty years, our relation was enough to warrant an invitation. Having a host in a song place is always a huge benefit and this time would be no exception.

I met Kent at his house and we went to one of the casinos. There I was introduced to his wife, Krista, and daughter, Morgan, at one of the luxurious pool areas. Lounging in such a ritzy area was a stark contrast to the stealth camping spot in the forest that had been my home just hours earlier. I’m always surprised by how rapidly things can change on this journey. 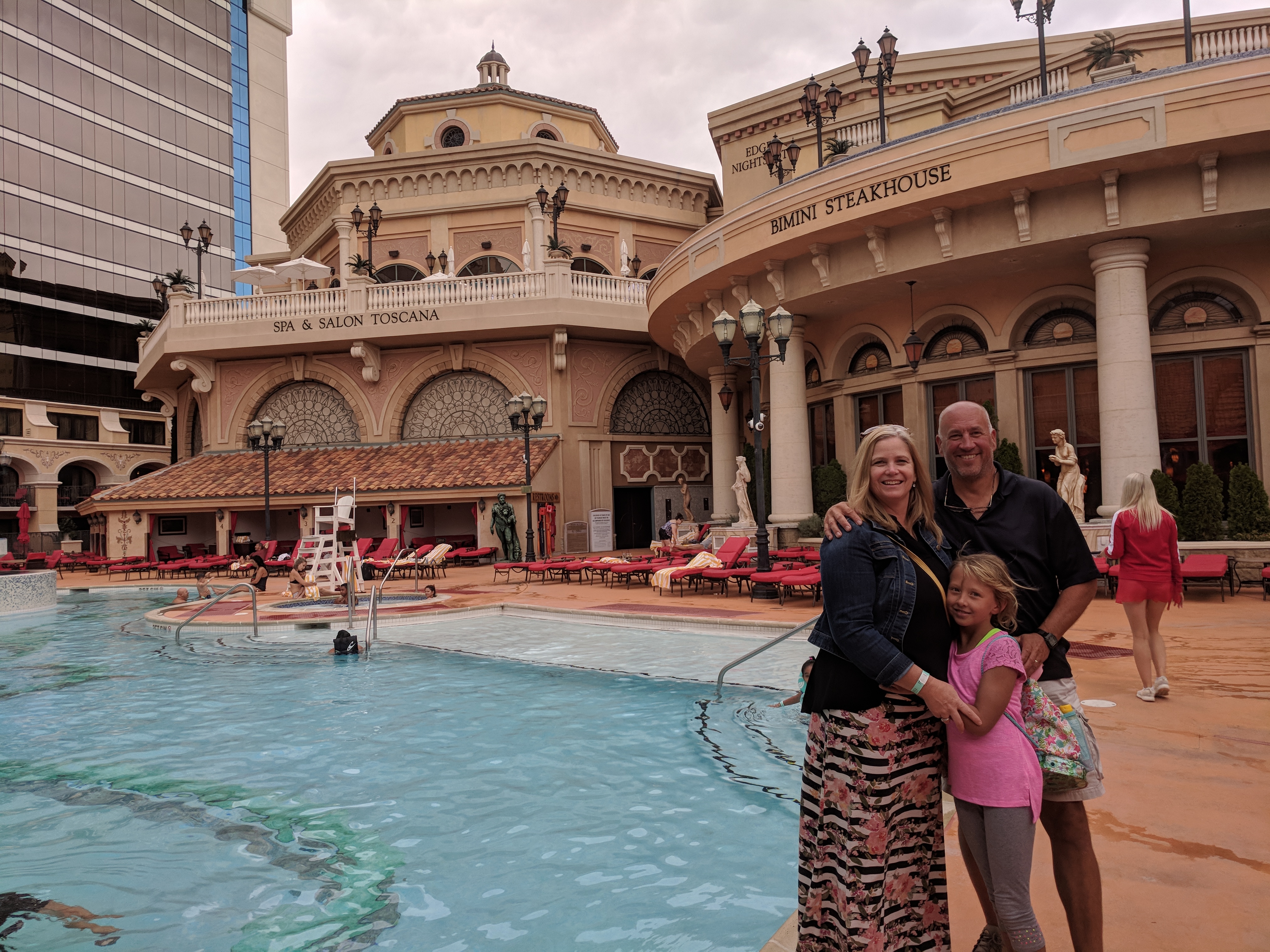 Kent would begin to make a bid for MVH (Most Valuable Host) once we were back at his place. He has been brewing his own beer for decades and prepared a pallet pleasing flight of his concoctions for me. This was quite a welcome gift! 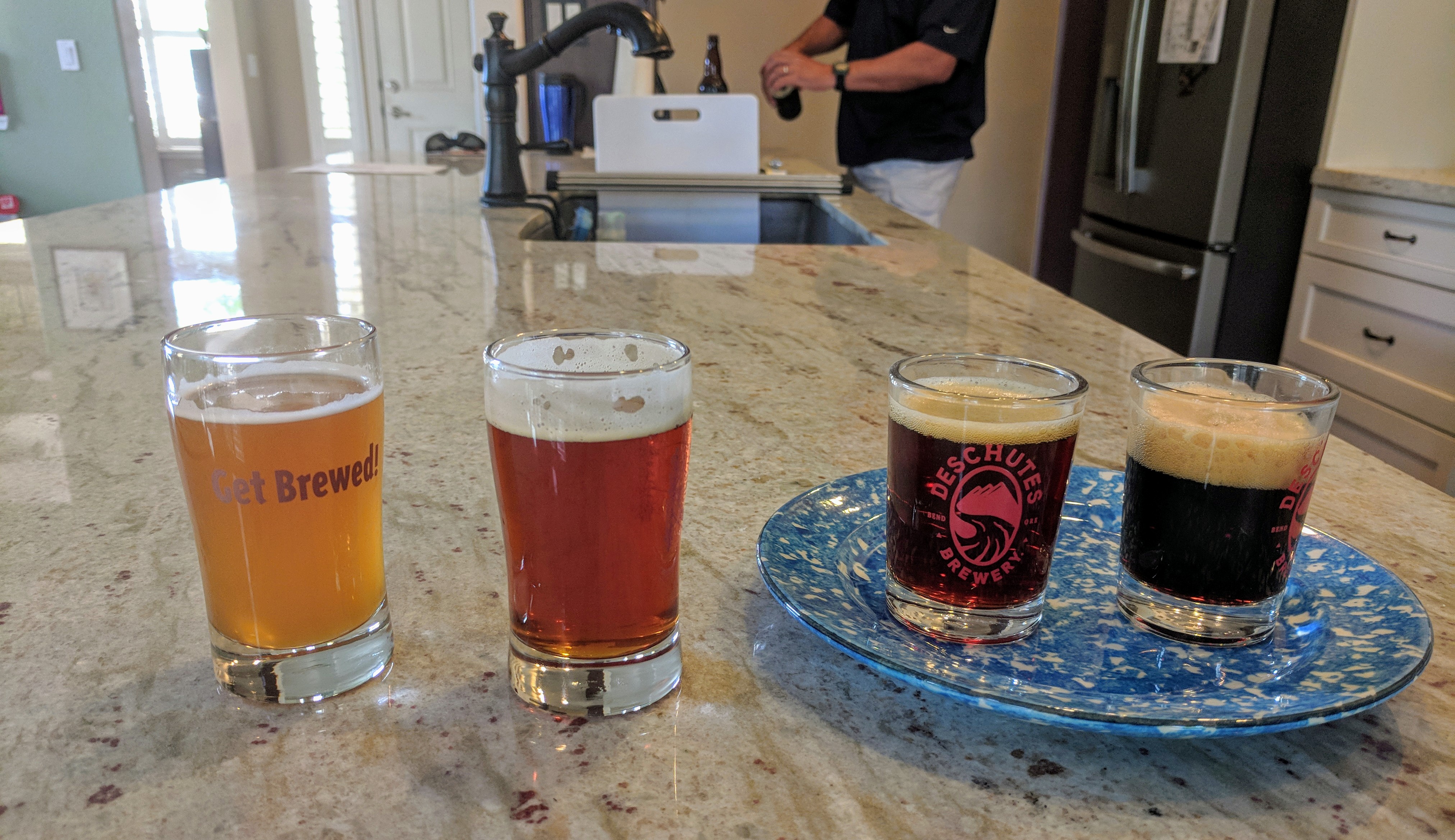 Kent and I spent a lot of time together this day. He works as a fishing guide and was currently in his offseason. Each summer he spends about two months in the back country of Alaska, hosting salmon fishing excursions. The logistics and organization of this operation were fascinating to me and I really enjoyed picking his brain about it. Here is his website: Anderson’s Outdoor.

We drove downtown and strolled around the unique city center. It is obvious that gaming industry has been massively influential here. Reno was the first place to go “all-in” on gambling in the US. In the 1930s, the largest casinos in the country were built here. 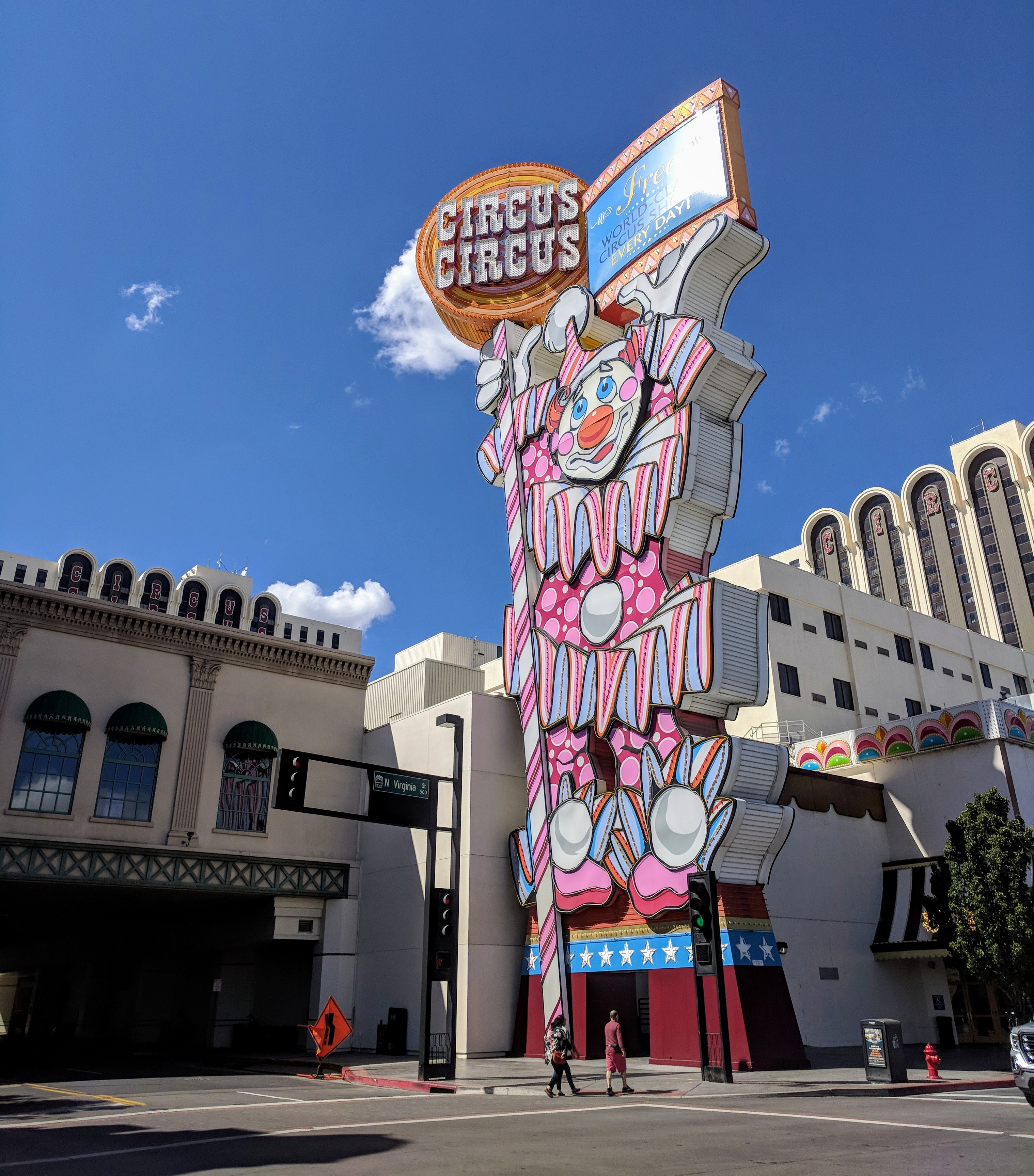 Though they’ve definitely made strides to diversify their economy, the gaming industry is still extremely profitable. The impressive creation below, a replica of a piece of silver mining equipment, is an imposing reminder of how much money casinos have available to waste on decorations. Wow. 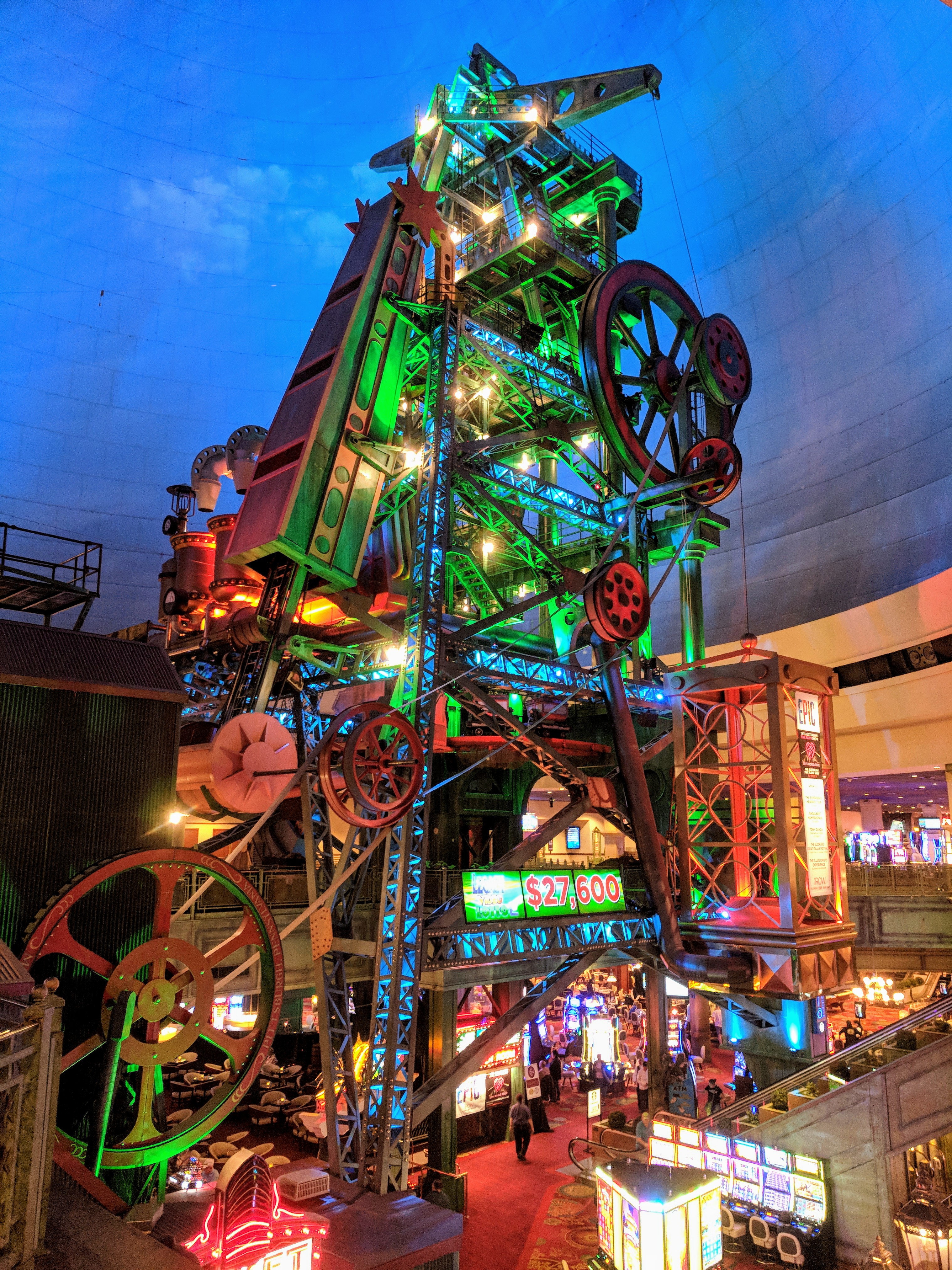 In the mid 20th Century, Reno became notable for another peculiar reason: The divorce industry. In an effort to attract more people westward, Nevada loosened its residency requirements for those seeking a legal separation. Dissatisfied couples would only need to reside in Nevada for six weeks before a judge would grant a divorce. The requirements for doing so were very arbitrary. One woman’s stated claim for needing a divorce was that her husband criticized her driving too much. Between 1941 and 1970, 325,000 marriages were ended in Nevada.

I get the feeling that Reno is trying to pivot away from some of its rebellious past. There are ample signs that it is becoming increasingly more family friendly, attracting innovative business (Tesla Motors just built a plant here), cleaning up its downtown and billing itself as the gateway to Lake Tahoe tourism. 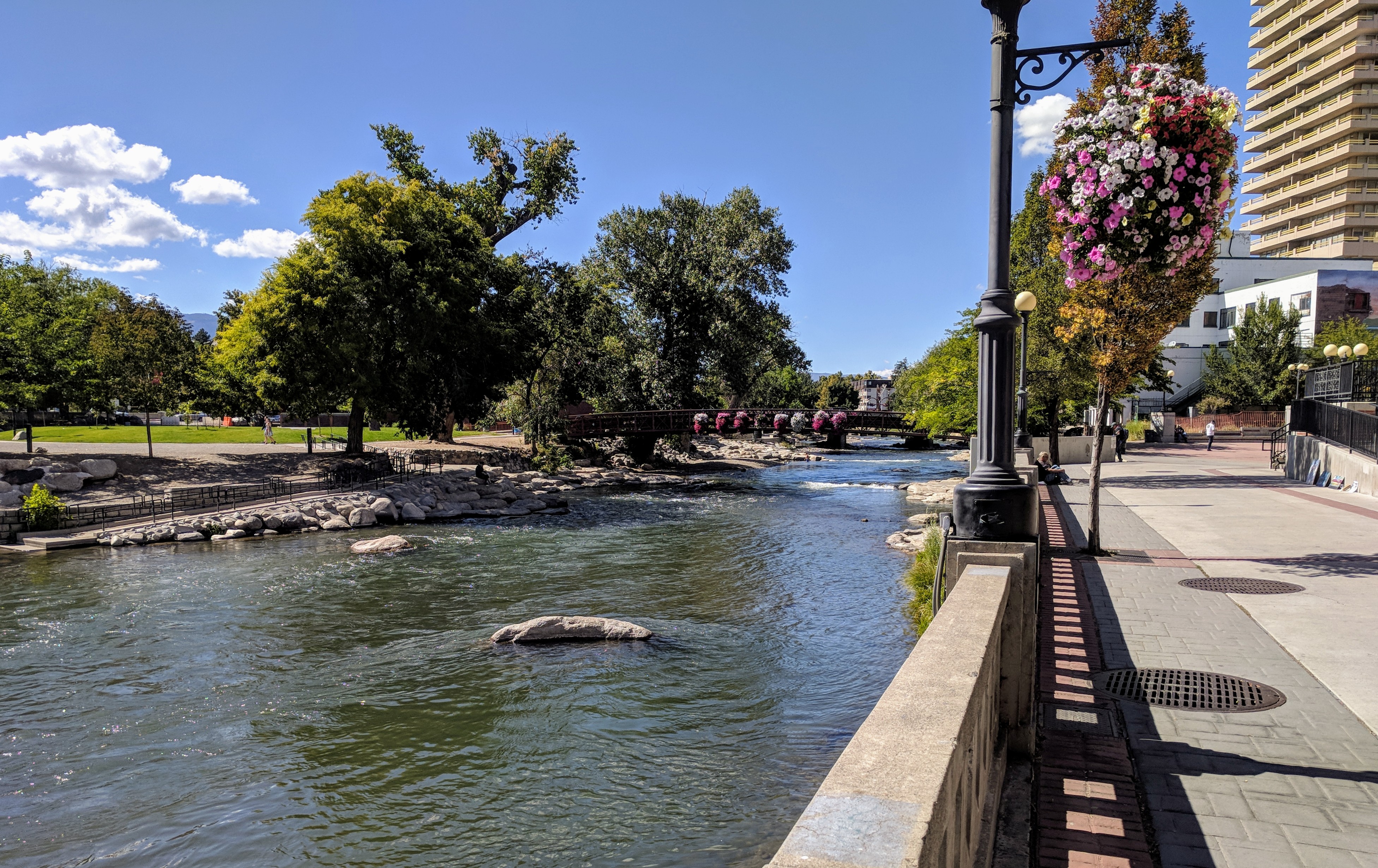 Reno is one of the places where there was never any doubt about where my official picture would be taking place. It had to be the iconic Reno Arch. Unbeknownst to me, there are actually two of them. Kent guided me to both.

The older, more classic, version is a couple blocks off of the main drag. It was built to promote an exposition that celebrated the completion of the Lincoln highway, the first transcontinental road built across the US. 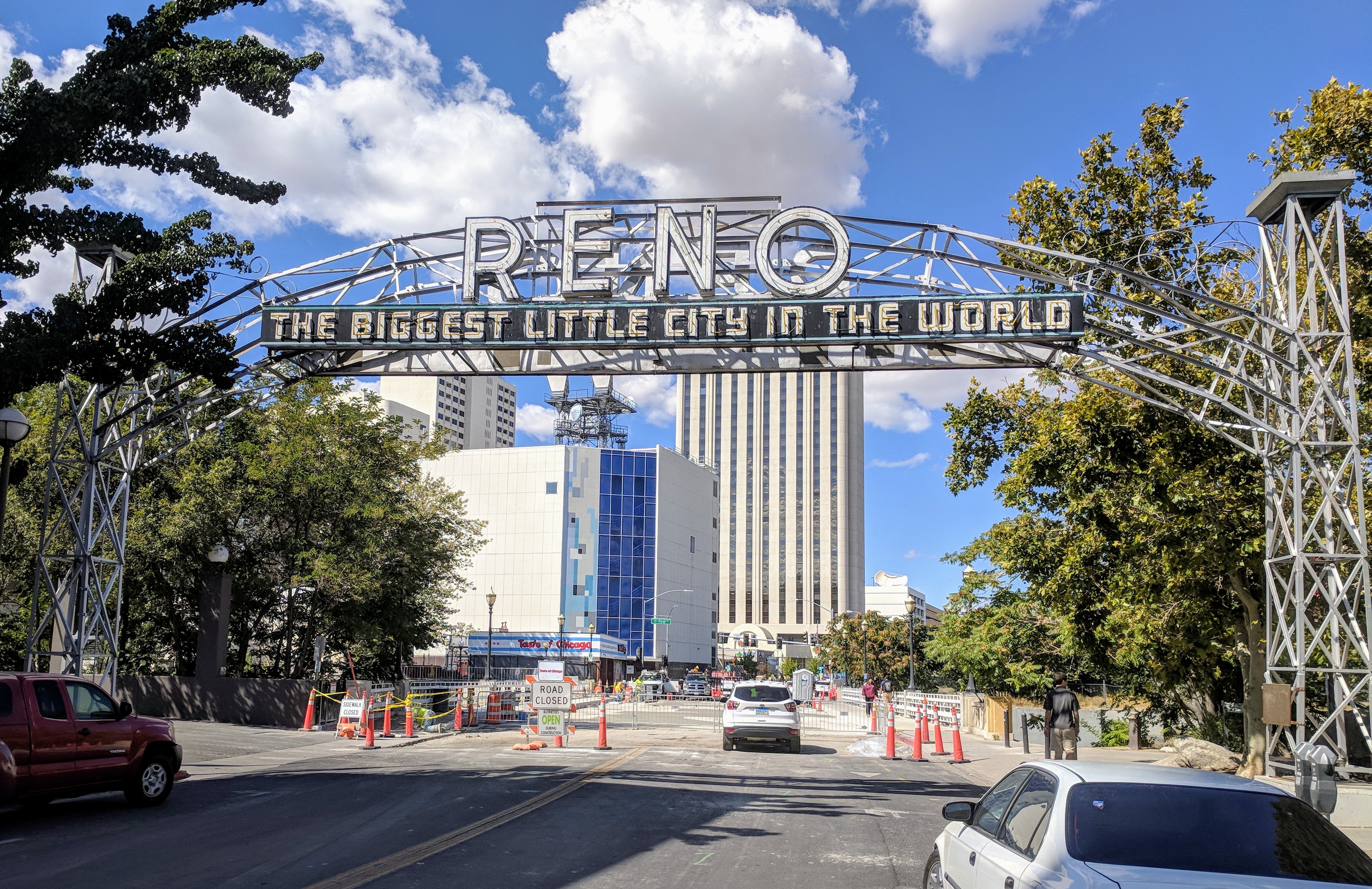 Reno’s excellent slogan, “The Biggest Little City in the World,” was chosen in 1929. This phrase also underscores the more modern Reno Arch which serves as a gateway to the downtown casinos. 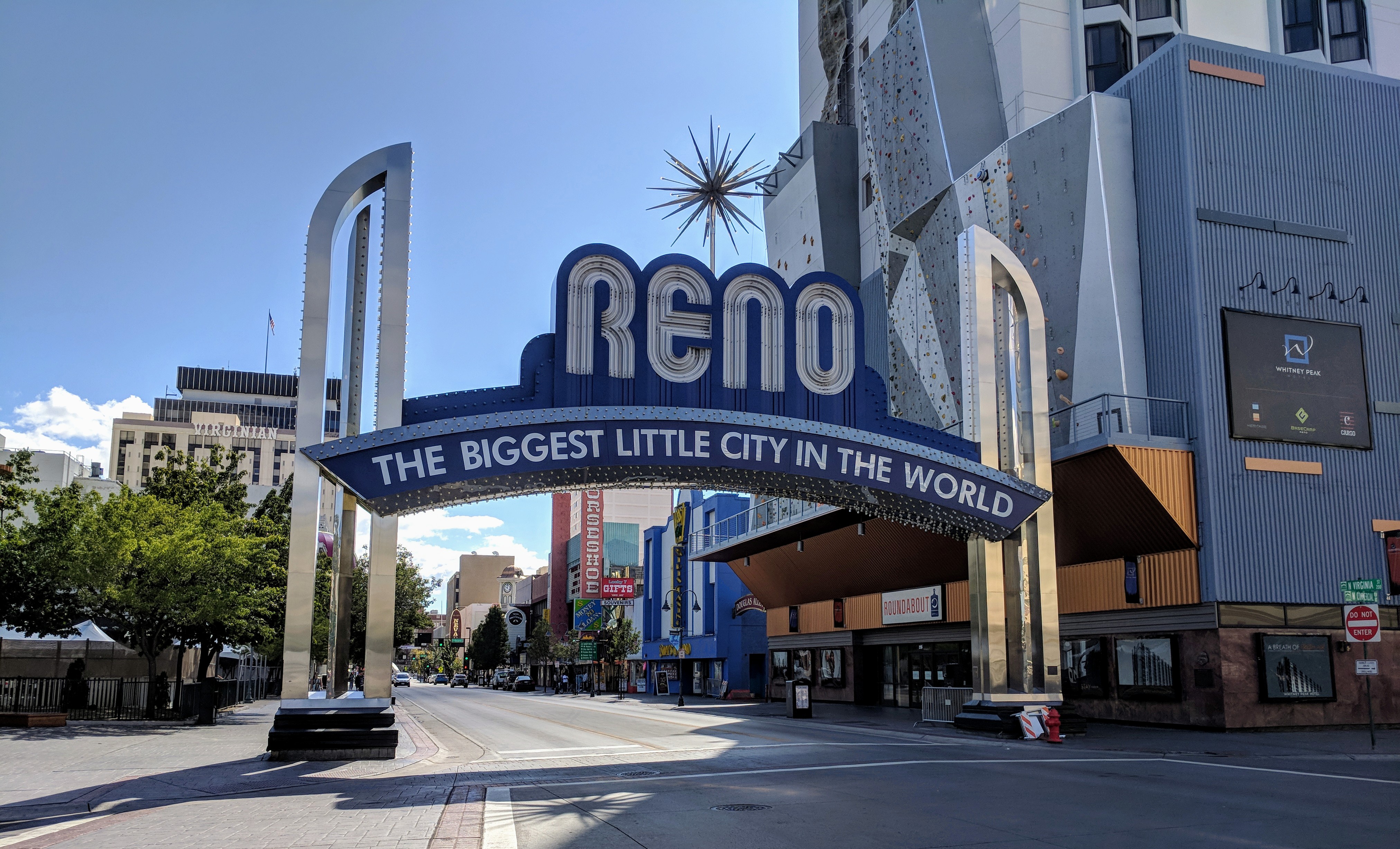 It looks OK in the daylight, but I knew that I would need to return after sunset to get the picture I wanted. Kent and I did so around 11pm. The city definitely had a different feeling when the daylight was replaced by the sparkle of the casinos.

The arch is not on a street which is perpetually busy, but we had to wait for a break in traffic to get the shot that I wanted. Thankfully the police on bicycles took no interest in our tomfoolery and Kent was able to capture one of my favorite song place pictures. 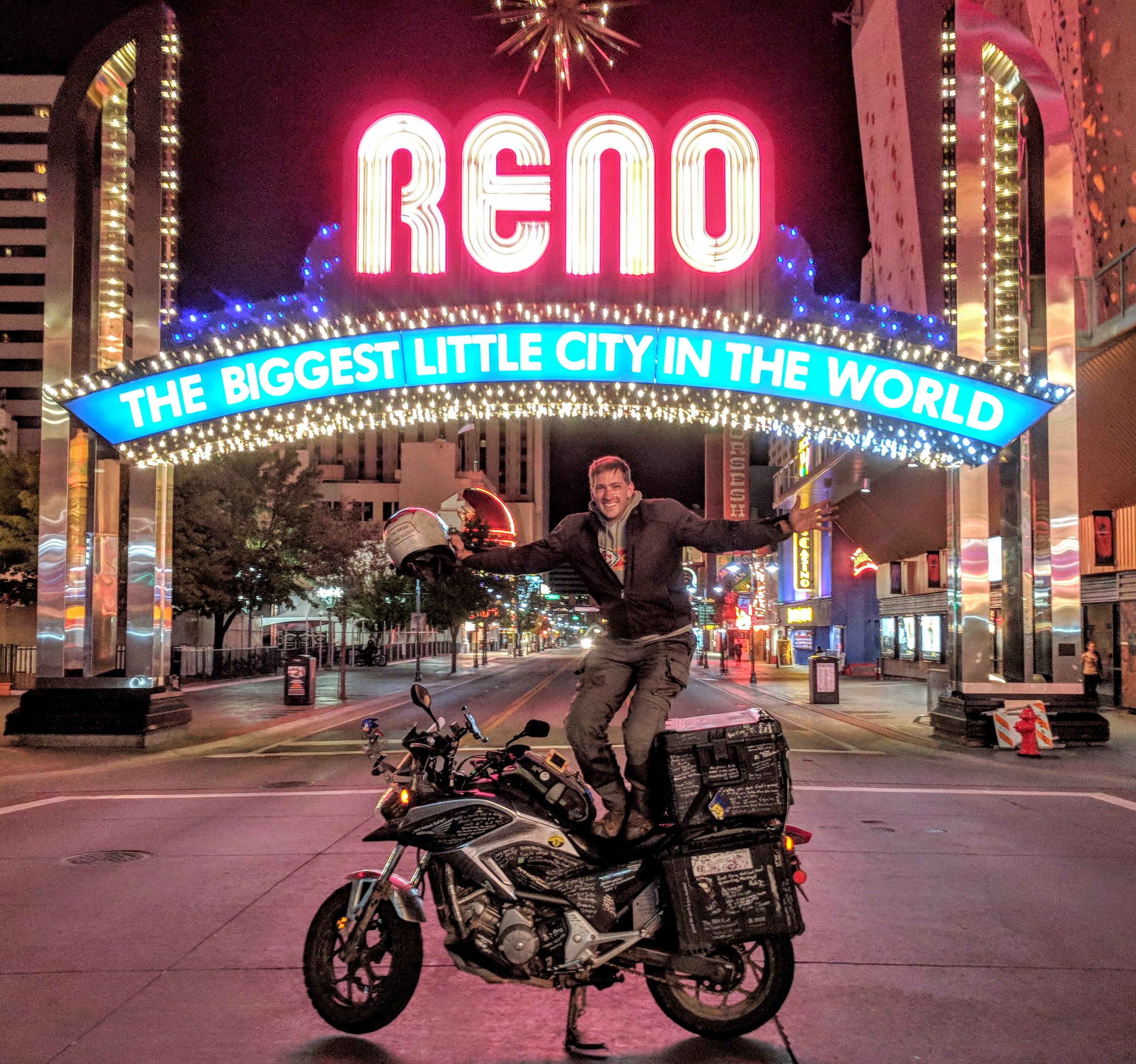 Having his help was vital to get this shot. Thank you so much, cousin! 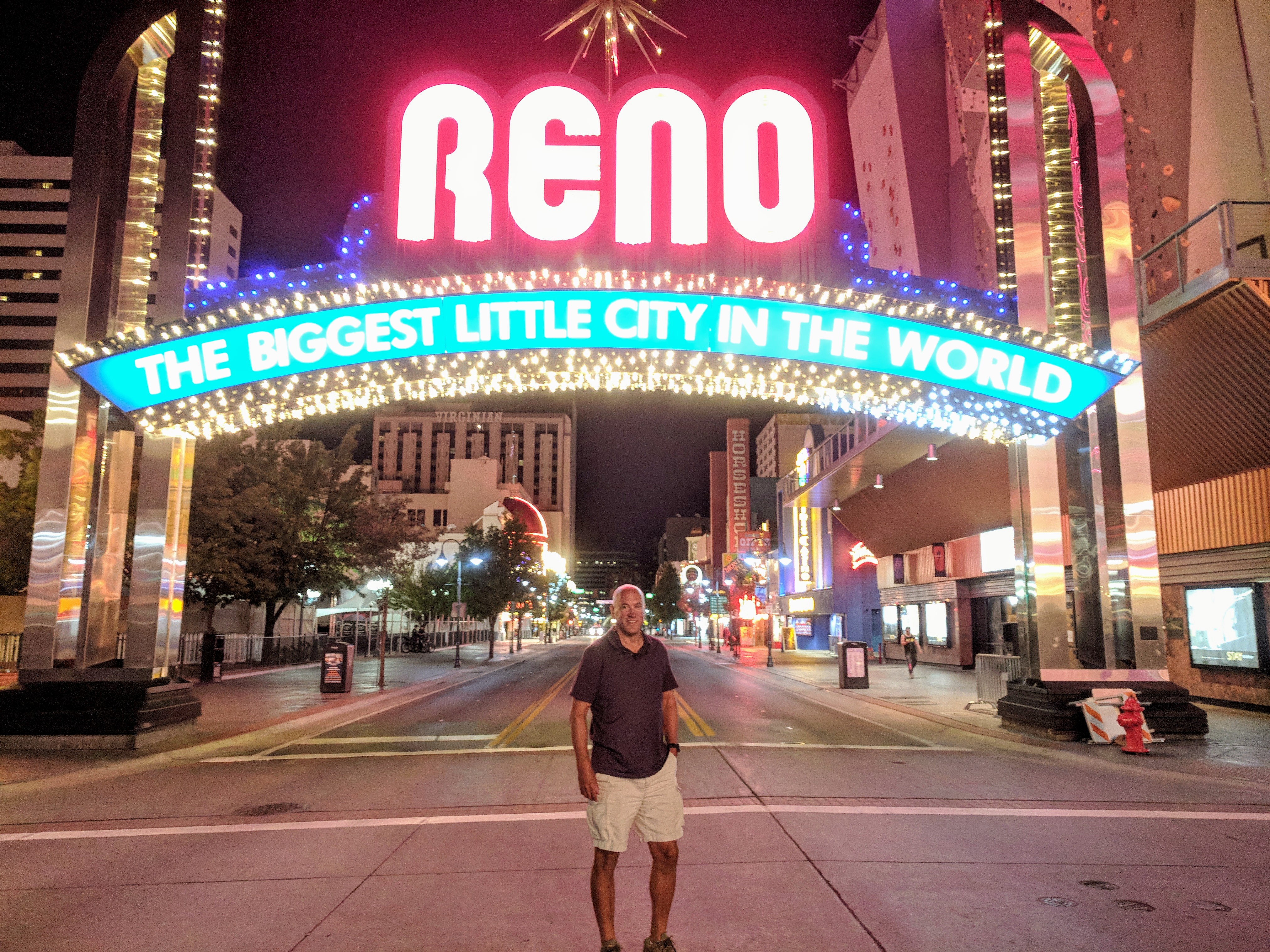 This was mostly a down day as I worked on writing and gave Annie a little attention. I did get to take part in helping Kent brew a batch of beer. It was great fun. 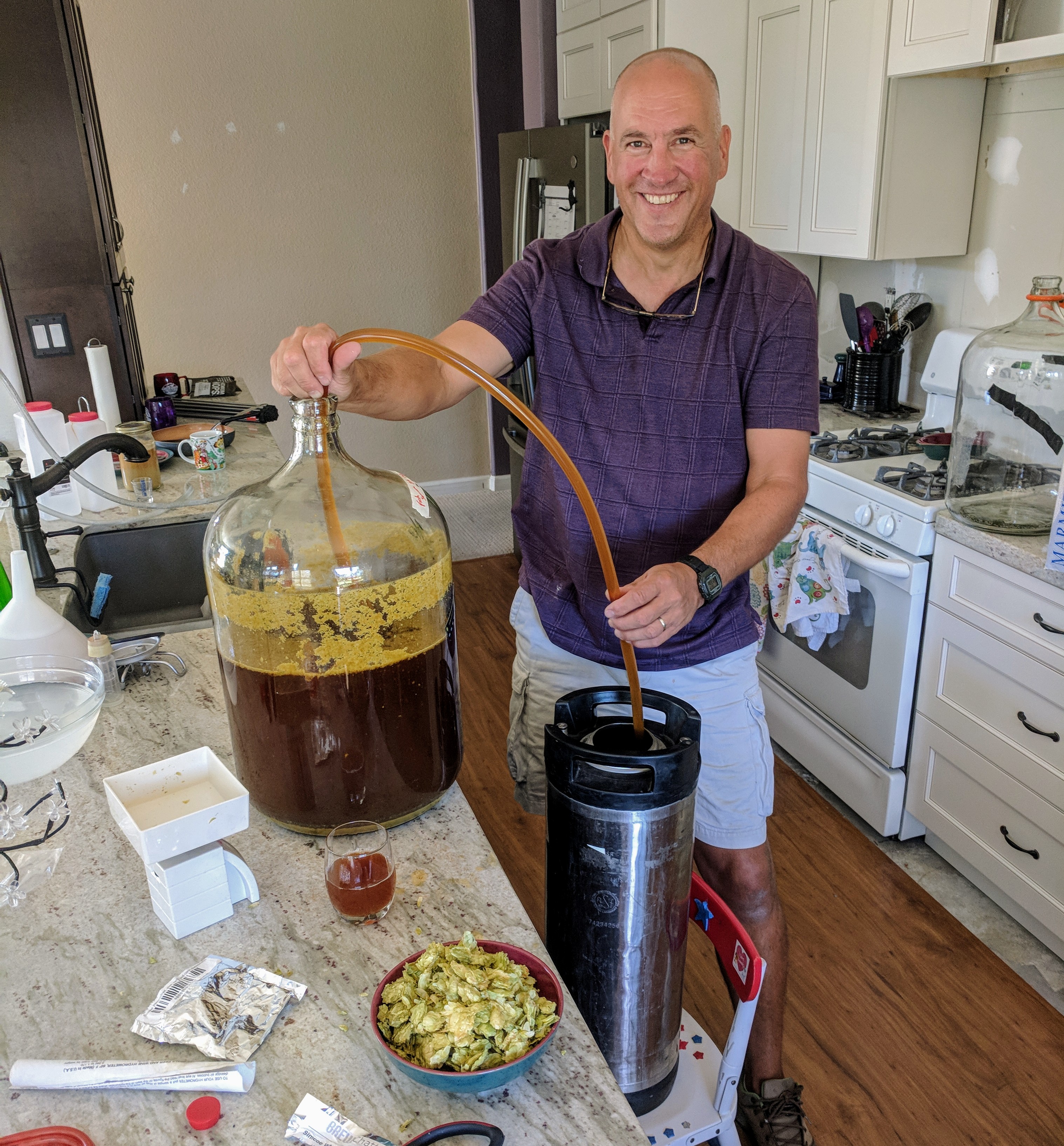 The chemistry and biology involved has always fascinated me and it was really enjoyable to be able to learn about the process from someone who was such an expert. 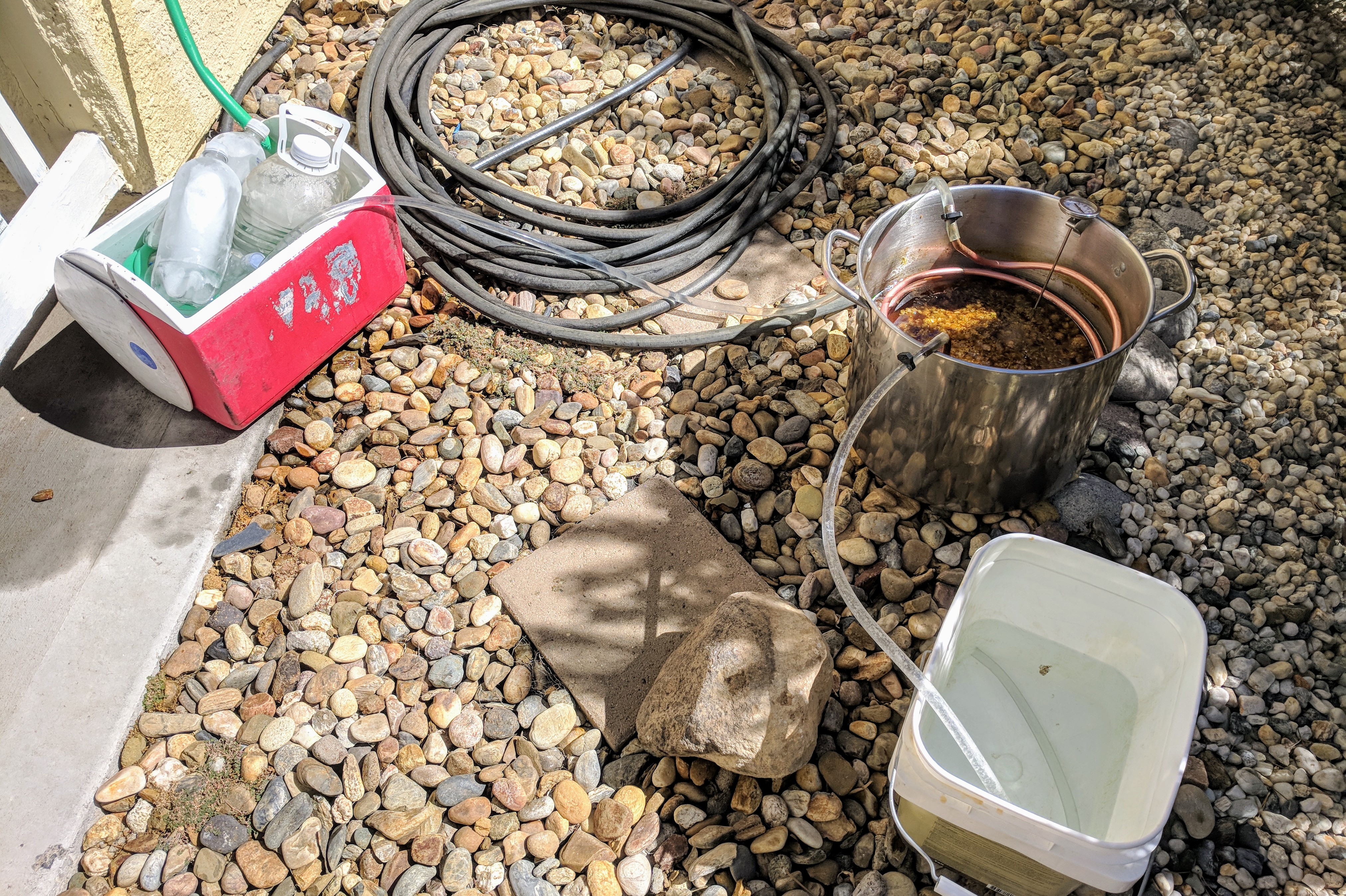 We had a nice breakfast-supper that evening (with Swedish Pancakes, of course) and I continued to enjoy getting to know the family better. They were so hospitable to me in so many ways. 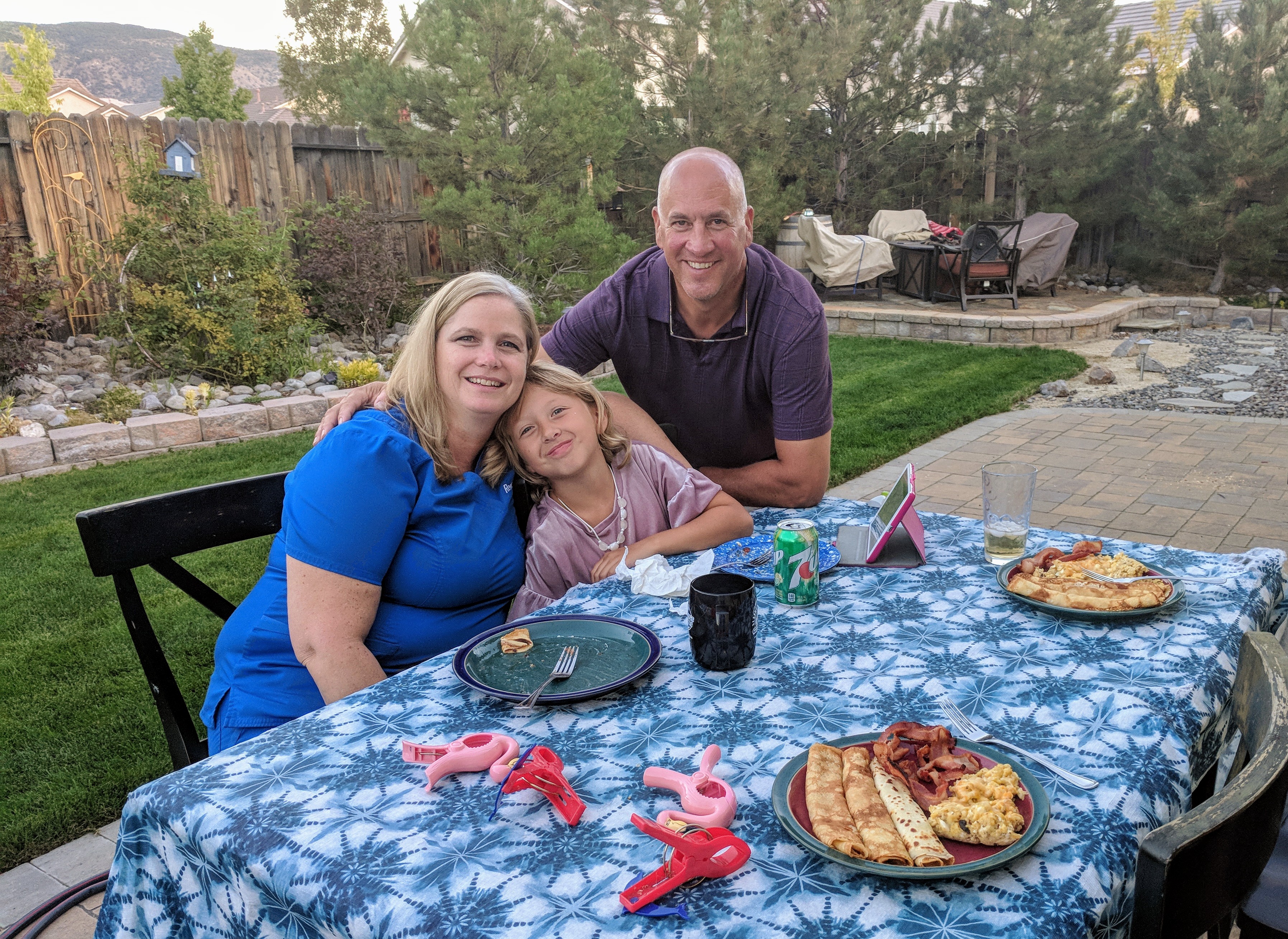 I’ve maintained a fairly strict anti-souvenir policy throughout my journey, but I had to ask Kent if he had any “Anderson’s Outdoors” swag that he would be willing to part with. He hooked me up well. 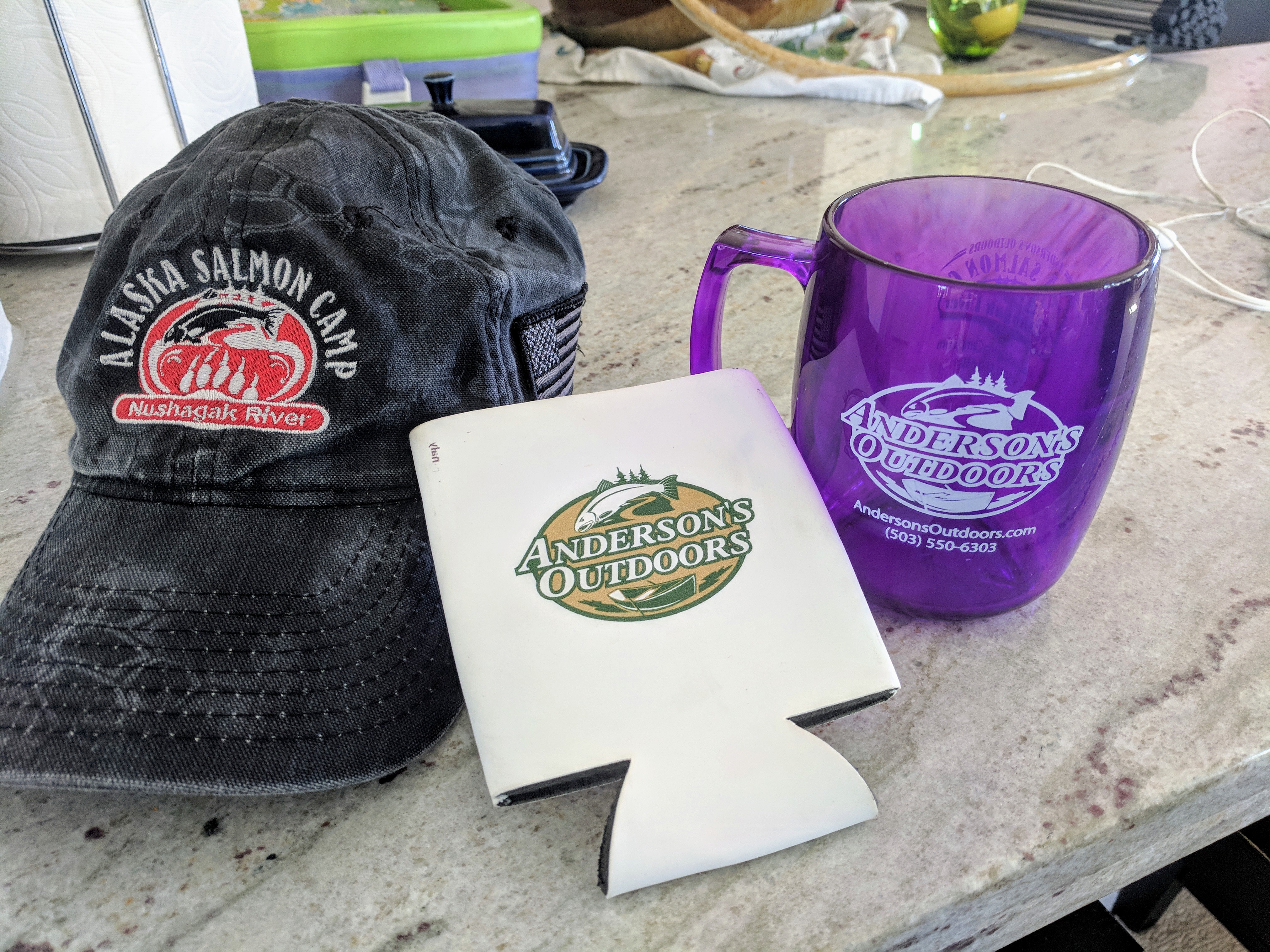 I accidentally missed out on getting signatures from Krista and Morgan, so Kent did the duty for the family. He also struck Reno off of my sign, marking the official completion of Verse 1 in the song. 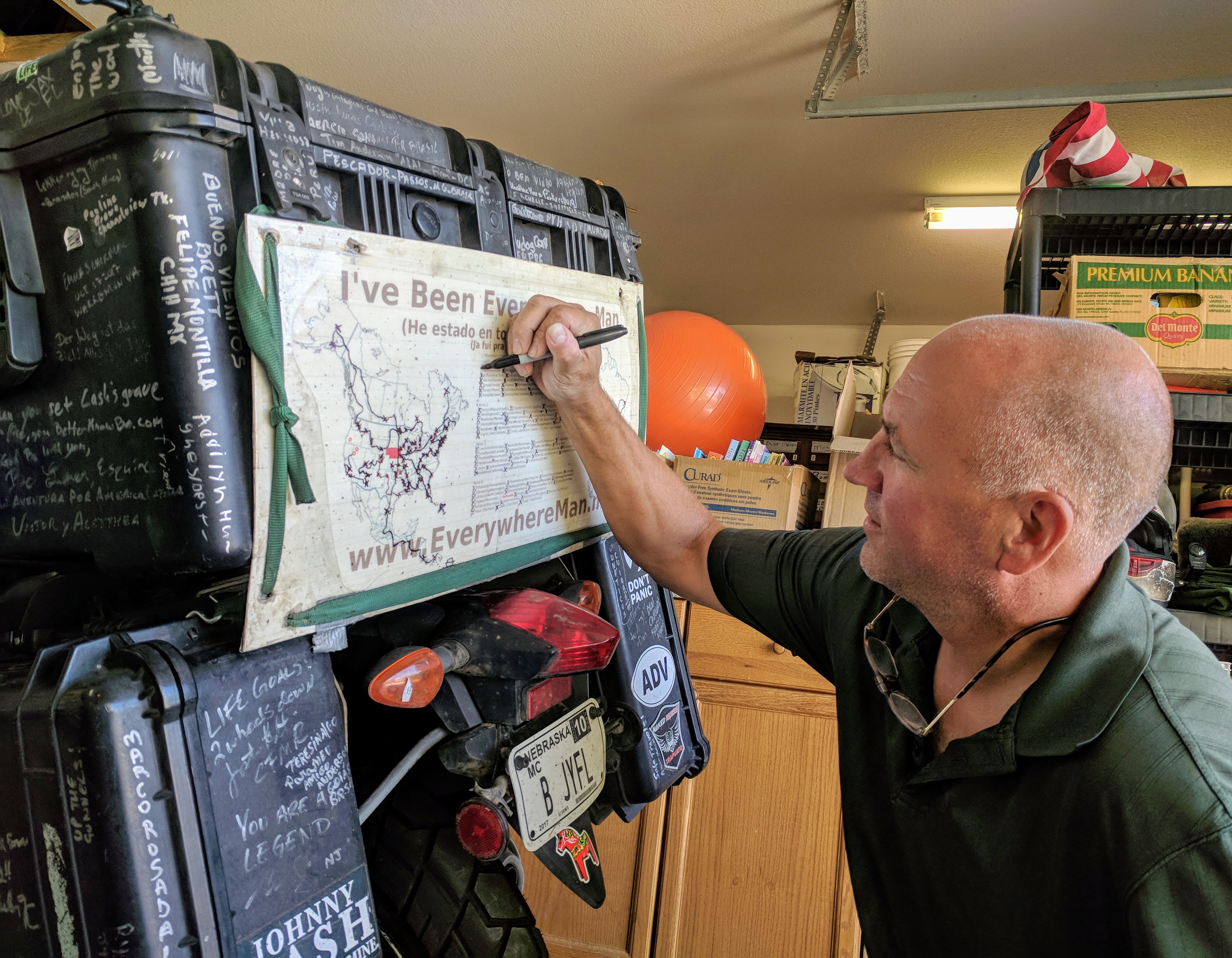 At this point I was left with only three places unchecked, Winnemucca, Crater Lake and Nebraska.

Getting reacquainted with Kent was a real bonus. Though this journey has had unexpected challenges, it has also included an immense number of unexpected blessings. Reconnecting with my cousin was a definite bonus. I know we will not go 20 years without seeing each other again.

Throughout these days there was an ongoing inconvenience which was quickly evolving into a frustration. I had been looking for front brake pads since I was in Los Angeles. I’d probably stopped by a half-dozen Honda dealers throughout California and came up empty every time. I eventually just decided to ship a set to Reno. Unfortunately, Amazon sent the wrong ones. 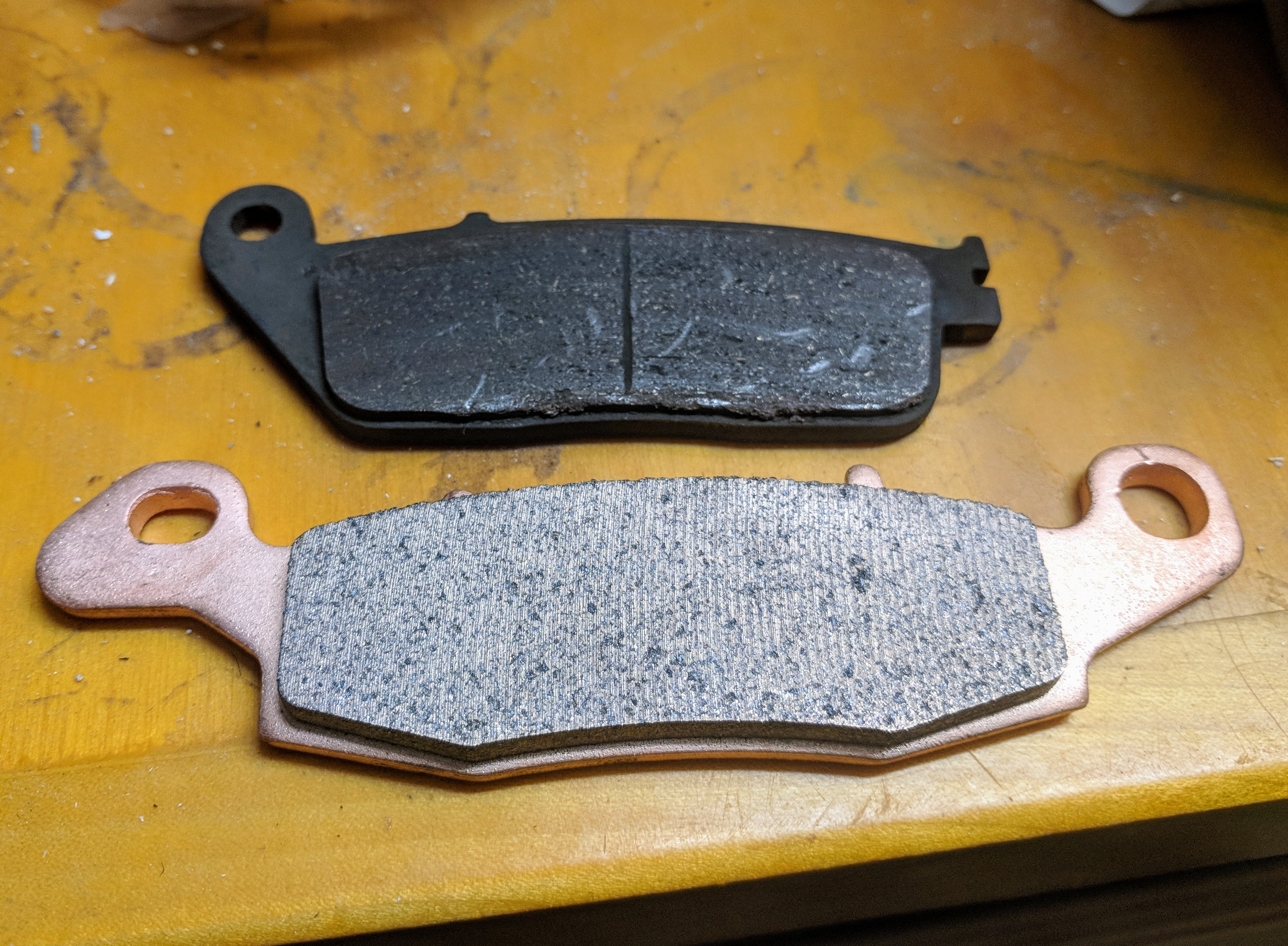 Even more unfortunately, I had popped a hole in one of the old ones while removing it. The fact that I neglected to inspect the new part before removing the old one further legitimizes my candidacy for World’s Worst Mechanic of 2019. I have a strong coalition of international support by this juncture. 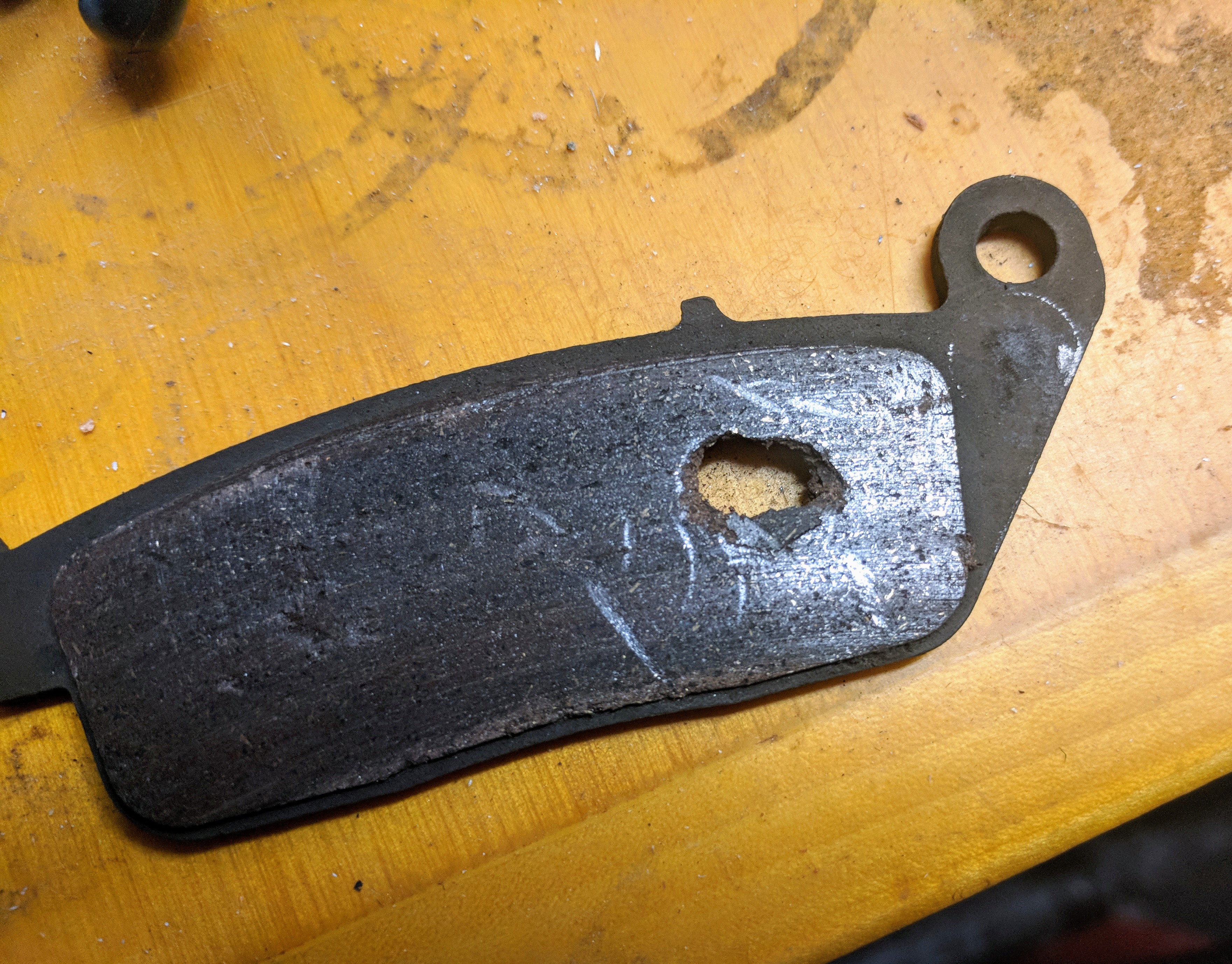 I put the old pads back on and limped to a shop in Reno. Though I was encouraged that my brakes would have a greater capacity for heat dissipation, the diminished structural integrity probably made my holey brake pad a net negative.

In a stroke of good fortune, the shop had my pads and I got to work installing them in the parking lot. A number of curious customers asked me about my trip and I had some nice conversations.

There was a guy named Paul with whom I really felt like I connected. He told me about some of the racing he does in the area, which included long endurance rides and a classic division with bikes from the 70s. I really enjoyed talking to him and hope we can meet again the next time I pass through Reno. 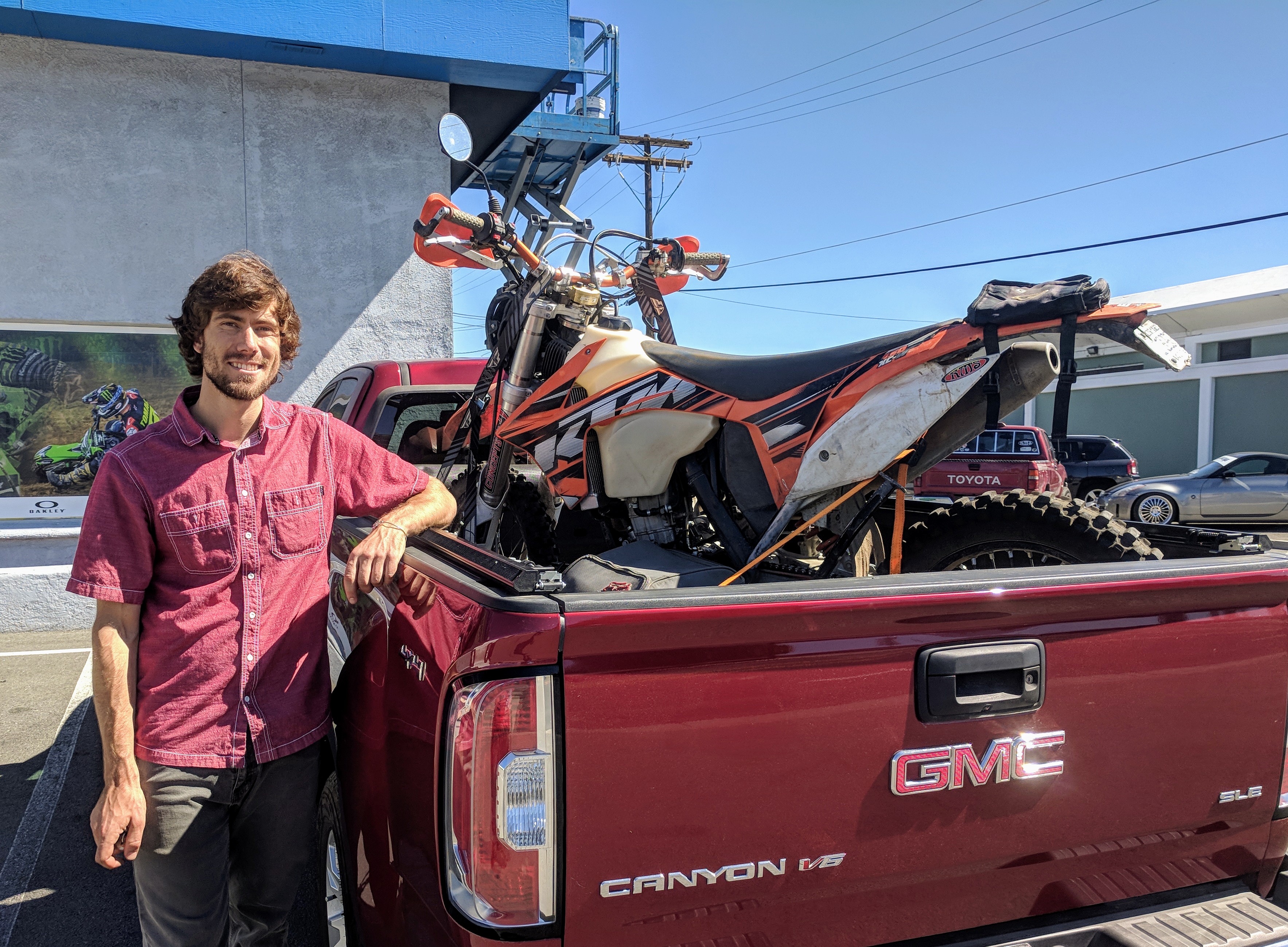 As I thought about it later, I realized that this connection was the latest in a repeating pattern that I should have picked up on by now: Nearly every time I face something that is frustrating, I end up making a new friend. Whether a rain cloud in Alaska, a flat tire in Colombia, or an exorbitant number of visits to the Brazilian embassy in Lima; all of these “negatives” have led to me making connections that I would not trade for anything.

These are the sorts of lessons that I hope will stick with me whenever future frustrations come down the road.

13 thoughts on “Sparkling in Reno”