I slept well, but a little later than I had planned. When I am able to find a good spot, this is a bonus luxury. In addition, I had time to make myself coffee in the tent for the first time on the trip. It is just the instant variety, but it still effectively warms and energizes.

The goal for the day was to get set up to take on Toronto. Approximate route:

After a short drive, it was time to cross the border.

Entering #Canada for the 6th time this trip. They should know me by now. pic.twitter.com/576EWiXjK0

The border crossing was…hmmmm….almost smooth. I explained my plans to the agent (he didn’t know the song) and he said there was no way to take a train from Newfoundland and Labrador to where I was going since it is an island. I tried to explain that Newfoundland is an island, but Labrador is part of the mainland. My explanations seemed to make him progressively more suspicious, so I just told him that I would have to check my maps again.

He must have actually been an American. They’re the ones with the failing education system. 🙂

On the Canadian side of the border, I was now in the city of Windsor. I found the Visitor Center, hoping to acquire an Ontario map. It was then that I realized this: Though Canada does not celebrate Labor day, they do celebrate Labour Day. Apparently they think adding a ‘U’ makes the idea more original. 🙂 The Visitor Center was closed.

I found a few large stores open. I was looking for a Canadian sim card for my phone. I have one that works all over the world, but the data is really expensive. I stopped at three places and struck out each time.

I decided to take the freeway towards Toronto. They have these stations called OnRoute which offer gas, a few food choices and free wifi. The gas and food is more expensive than normal, so I decided to pass on those. However, I consumed the free wifi ravenously.

I almost had a post done, when their wifi quit. Shoot. I decided to pack up and move on. I almost rolled out, but decided to go back in and fill up my water pack. This decision ended up being one of the best ones of my trip.

The figurative sky clouded up, and a downpour of blessing began.

As I exited building, I was greeted by Catherinanne. She began to inquire about my trip with a friendly, joyful smile on her face. Soon her husband, Kevin, exited the building and joined our conversation. I told them about my plans, that I was ultimately headed up to this obscure place that no one has ever heard of in the middle of nowhere where no one lives except for bears and lumberjacks and there is not even a road that goes there it is so far from civilization but there used to be some mining operations up there, called Schefferville. (I usually speak in run-on sentences) 🙂

It turns out that Kevin is an Anglican priest, who used to serve the Labrador City church…..don’t tell me the odds.

I asked if he knew of a safe place, like a temporary storage unit, where I could keep Annie while I took the train. He said he still knew lots of people there and he could arrange for me to store the bike at someone’s house.

“I will find a place for your bike.”

He repeated this phrase a few times, with a surprising amount of conviction in his tone.

Catherinanne had excused herself from the conversation to make some calls, seeing if she could arrange a warm meal for me with some of her friends in Hamilton (my approximate place for the night). All of her connections were unable to help, but I was really touched by the effort.

As we were preparing to part, Catherinanne said, “Oh, I need to give you a dove!” I wasn’t sure what this meant. Perhaps some obscure Canadian ritual? Could I cook a dove over my camping stove? Do they taste like chicken?

None of the above.

Catherinanne is Catholic and had recently had the honor of meeting Pope Francis. The Pontiff  himself had blessed these little birds. She gave me three of them. “One for you and two to give away. You’ll know when the time is right.” 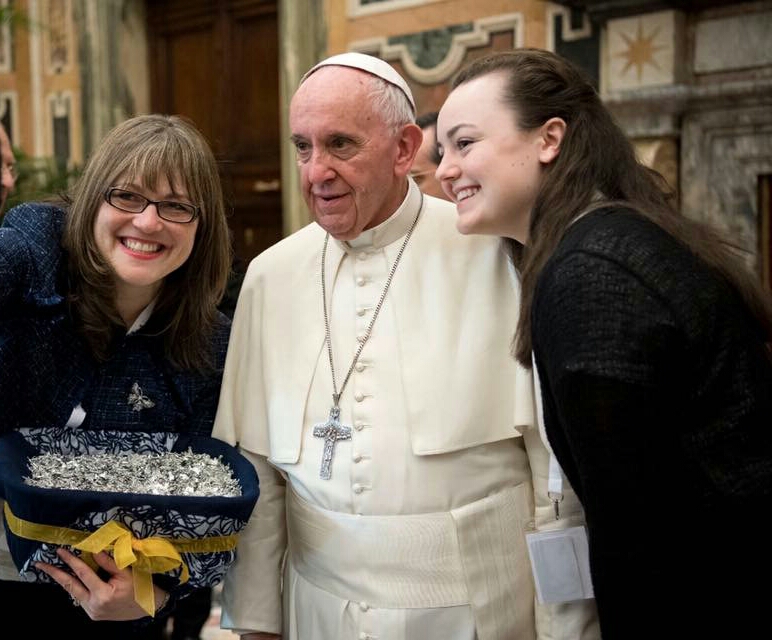 I thanked her for the gesture, but told her that I could absolutely not afford to carry any more weight….yeah, right. 🙂 Seriously, how neat is this? I don’t think I could have handpicked a better pair of Canadians to bump into. 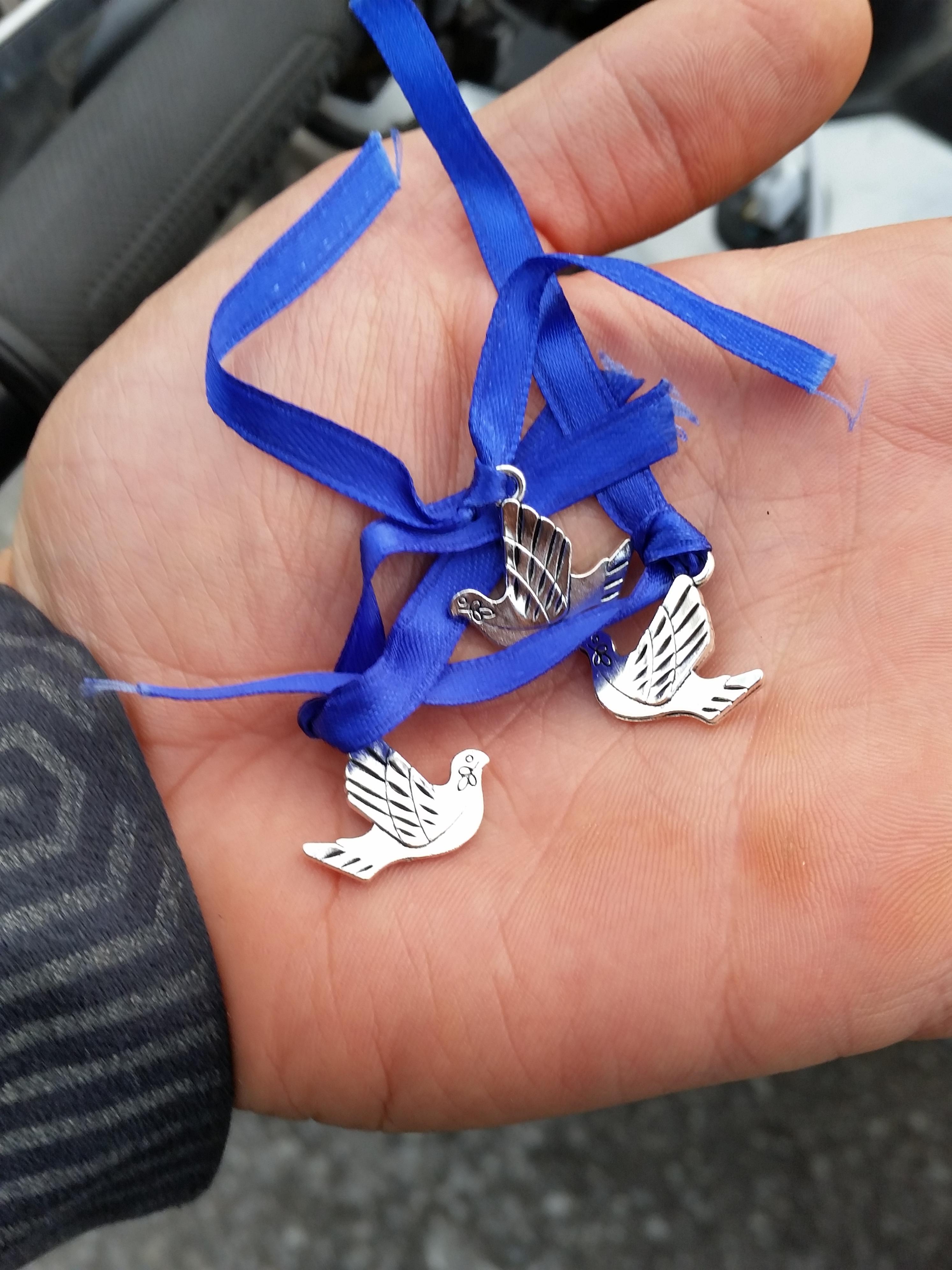 They both wrote some nice messages on Annie. If I continue to meet crazy Jesus people at my current rate, Annie will soon have the full Torah inscribed on her body panels. 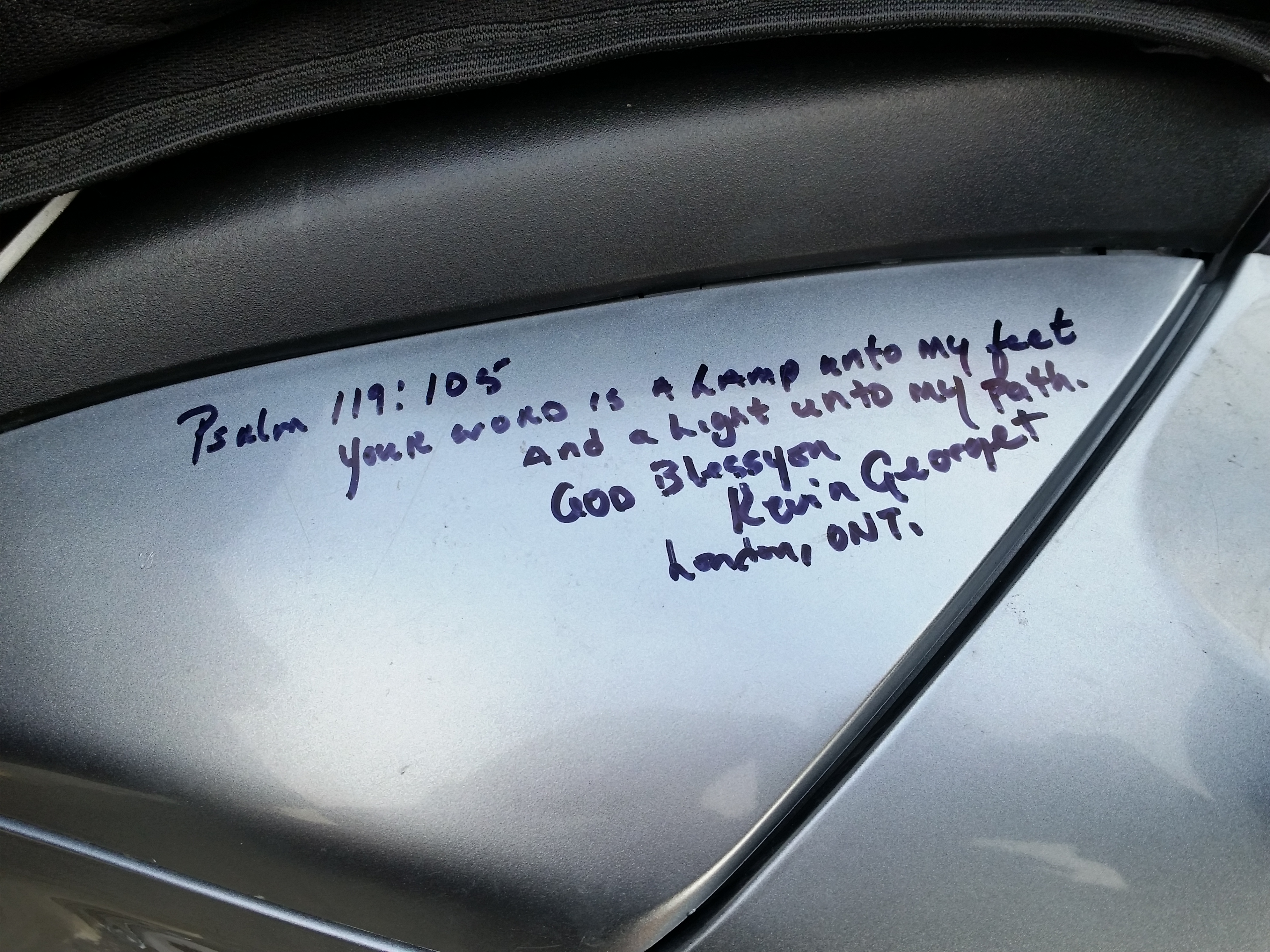 Since our initial meeting, it has now been arranged that I will have a place to stay while I am in Labrador City. What a blessing! I can’t wait to get there!

I continued towards Toronto and made a couple of additional stops, trying but failing to access enough internet for a post. Ah, the blogger’s curse!

Around 4:30, I decided to start scouting for a place to put my tent for the night. Since I was in an unfamiliar place, I wanted to allow plenty of time.

Am I too picky? Maybe. Too careful? Possibly. It is hard for me to define the exact qualities I look for in a spot, but I wasn’t finding anything that fit the bill. I began to get frustrated. Then it started to get dark.

The literal sky clouded up and a literal downpour began.

I decided to bite the bullet and navigated to a provincial park. I didn’t want to have to pay, but that seemed like the only option. I was greeted warmly at the gate of the park and I asked the cost for one night.

I winced and drooped my head, explaining my hesitation to the nice lady. She was sympathetic, even offering to call some of the private campgrounds in the area to check on their prices. Though I was treated so well, I just couldn’t stomach the cost. I apologized for my reaction and rode back into the rainstorm.

So what am I? Disciplined? Irrational? Brave? Miserly? I tried to examine my motivations as I got wetter and wetter. I am so focused on conserving my funds so that I can feel free to spend on the Central/South America part of this trip. I would not even bat an eye at paying this price in Guatemala or Colombia. In Canada, however, it seems like an avoidable expense. While paying for the spot would have greatly enhanced my comfort, it would have done little to enhance my safety. Only one of those things is a necessity.

The rain intensified and I continued my hectic search. Through a series of “wrong” turns I eventually saw some big trees with some gaps behind them along the road. I decided it was good enough, plowing through a drainage ditch and sneaking between some branches. I set up the tent as quickly as I could and dove inside.

I was overheating rapidly so I stripped off all of my clothes. Having my base layers get damp would mean a frigid night. I’m not sure how well the picture will show, but steam was rolling off of me. 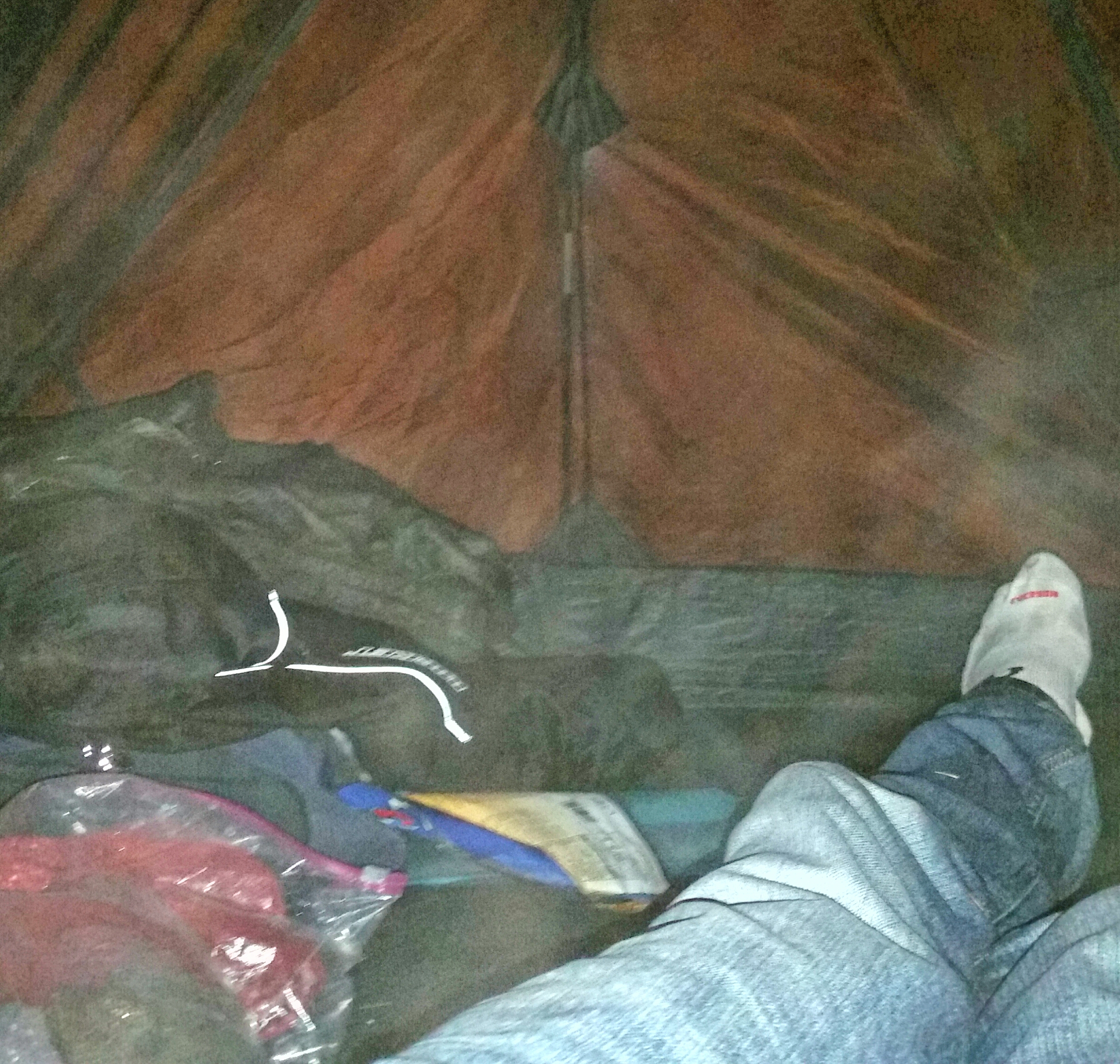 I don’t know if my tent was ever perfectly waterproof, but it could not stand up to this downpour. I would have to be OK with being wet. There was no stopping it.

Real-time update: It is 3 days later. My jeans are still not dry. 😦

I let myself be crestfallen and depressed for about five minutes, sitting there naked, clutching my forehead with my left hand and a rolled up tortilla with my right. Then I was able to remember what a wonderful day I had had. I will soon forget the uncomfortable feelings, while the memories of the positive encounters will be an encouragement for years to come.

I just kind of wish that Pope Francis had infused the doves with a continual blessing of dryness.