There is no easy way to get to Labrador. I am unfamiliar with this newfangled contraption you call “airplane.” Surely winding gravel roads are safer.

Part 1, in case you missed it.

So why is Schefferville even a place? I’ve gotten this question a number of times as I’ve explained where I am going.

Schefferville was established in 1954, after deposits of iron ore were discovered in the area. The town was built by the Iron Ore Company of Canada, the same company that founded Labrador City. At its peak in the late 60’s, Schefferville was home to around 5,000 people. It must have been a large enough dot on the map that it caught the eye of Australian composer, Geoff Mack, as he perused his atlas for places to add to the Americas version of the song.

In 1982 mining in the area was shut down. The population dropped precipitously, now being listed as a meager 213. Most of the remaining residents were indigenous people, who inhabited the area before mining operations began.

There has been a recommencement of some mining operations in Schefferville, so perhaps it is poised to make a comeback. Surely the extent of this comeback hinges on my reporting of conditions there, right? 🙂

Newfoundland and Labrador day! I’m always excited to have a day where I can visit a state/province/country where I’ve never been before. By my rough count, this would be just the 8th time it had happened on the trip. (4 new provinces and 3 new states previously. No new countries….yet)

I knew a tough ride awaited me. Labrador would make me earn it. Rte.-389 is kind of infamous among locals for being a dangerous road. The joke about the worst section, where it winds sharply on a poor gravel, is that you can see your own tail lights.

My new friend, ADVJoe, had described the surface conditions as “snail snot” when it gets wet. Good thing it hadn’t rained each of the last five days….wait.


An early start was vital, so I was all packed up right at sunrise. The downside of this is that you never get a good picture of your campsite. It was not as cold as I thought it would be (probably 45 ish). I could see my breath, but mostly due to humidity rather than temperature. 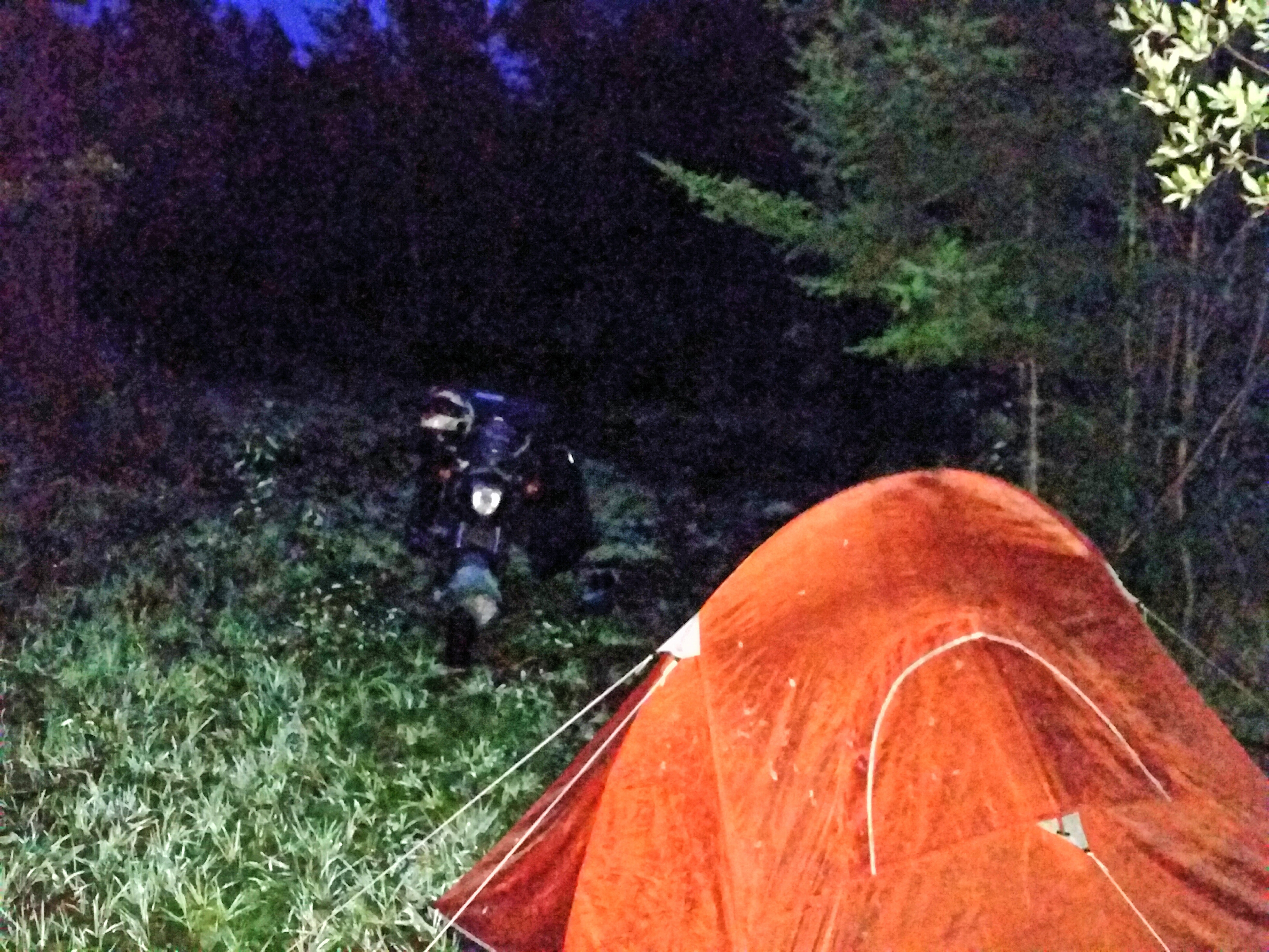 I made it to Baie Comeau, where my north bound road begins, around 7:30. I made a quick stop at Tim Hortons to make some final preparations. I order a wrap that looked fitting called le travailleur (it actually means “worker” not “traveler” (-: )

As I was preparing to leave, a nice guy on a Harley started talking to me. “Talking” is perhaps not the best word. He didn’t speak English, German or Spanish; but he knew a lot more English words than I do French. We probably communicated for about 15 minutes. He was familiar with the road I was taking, as he used to drive freight trucks up there. He signed Annie’s right side case as we wished each other “Bon voyage.”

Map from the Quebec welcome center: 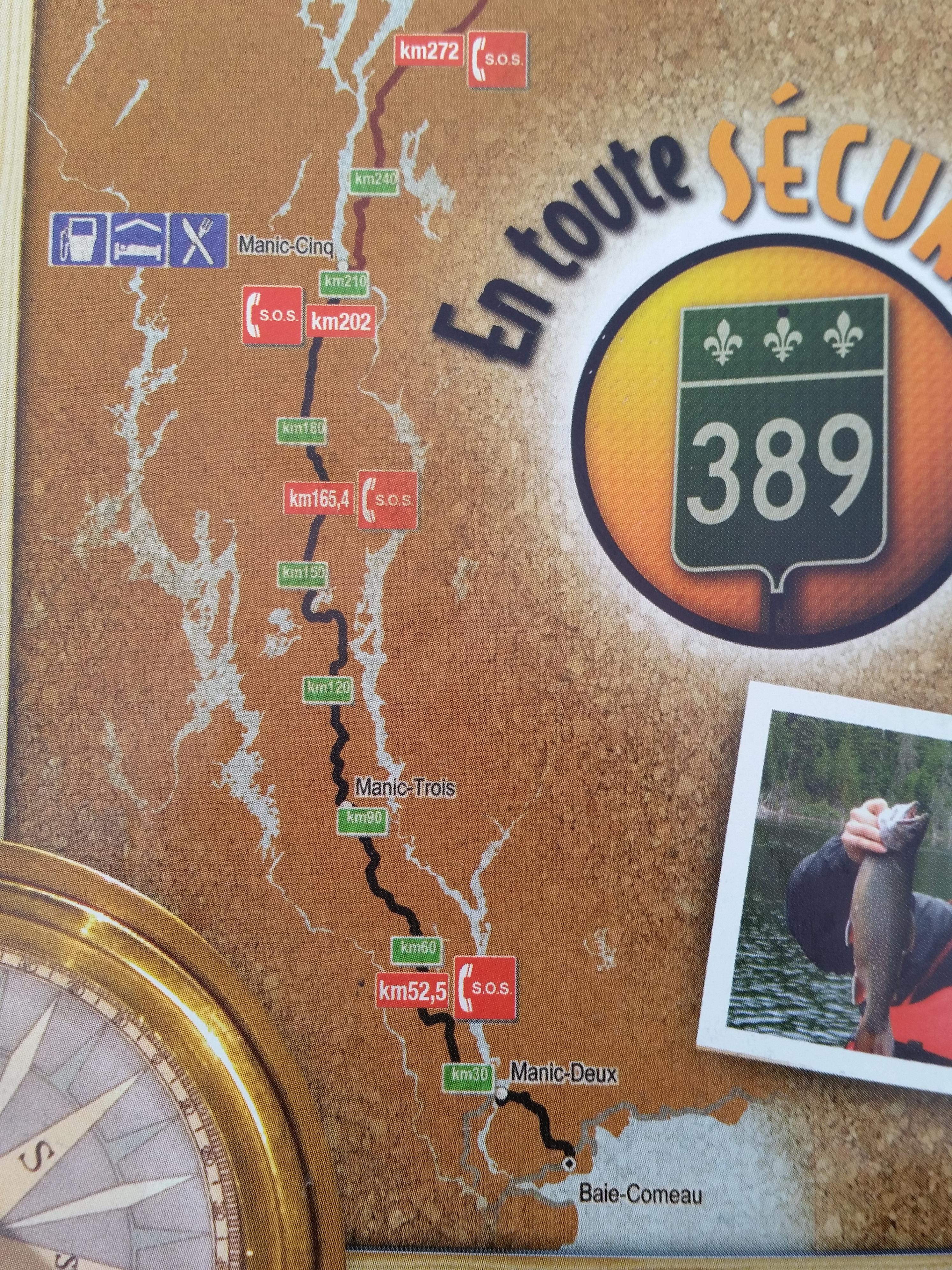 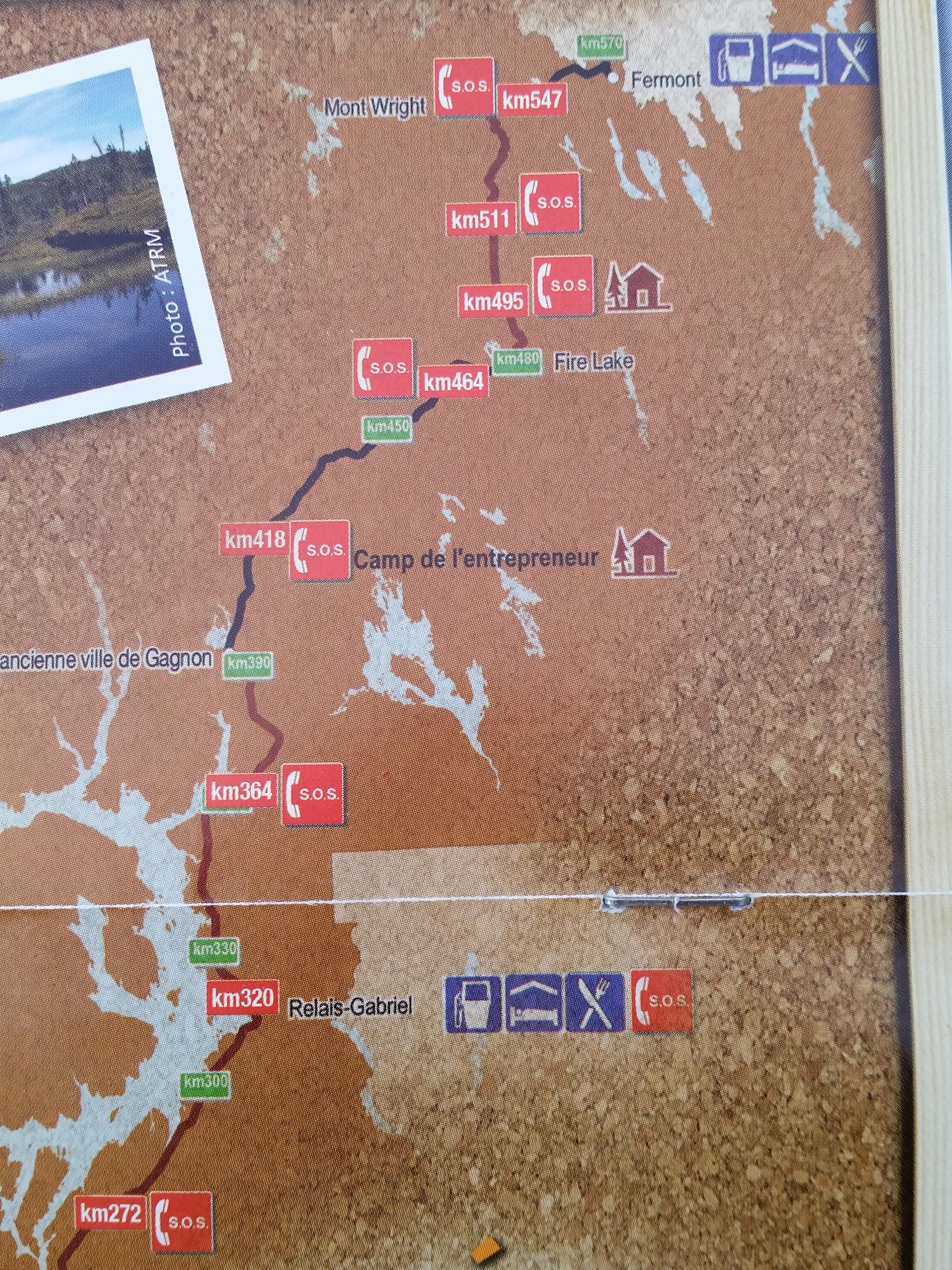 I’ll do a Google Map of the route too, with all of the places I mention:

The opening stretch of highway 389 is absolutely fantastic. It has all of the things that make it a great motorcycle road: Ample turns, sparse traffic, smooth surface, signs with speed suggestions at every turn, very small chance of falling to one’s demise.. It was great!

You can see the smile on the bridge of my nose:

Sonic tried to play it cool, but he was really enjoying himself too:

The road follows a similar path to the Manicougan River, a major source of hydroelectric power. Two of the dams, Manic-2 and Manic-5, are visible from the road. 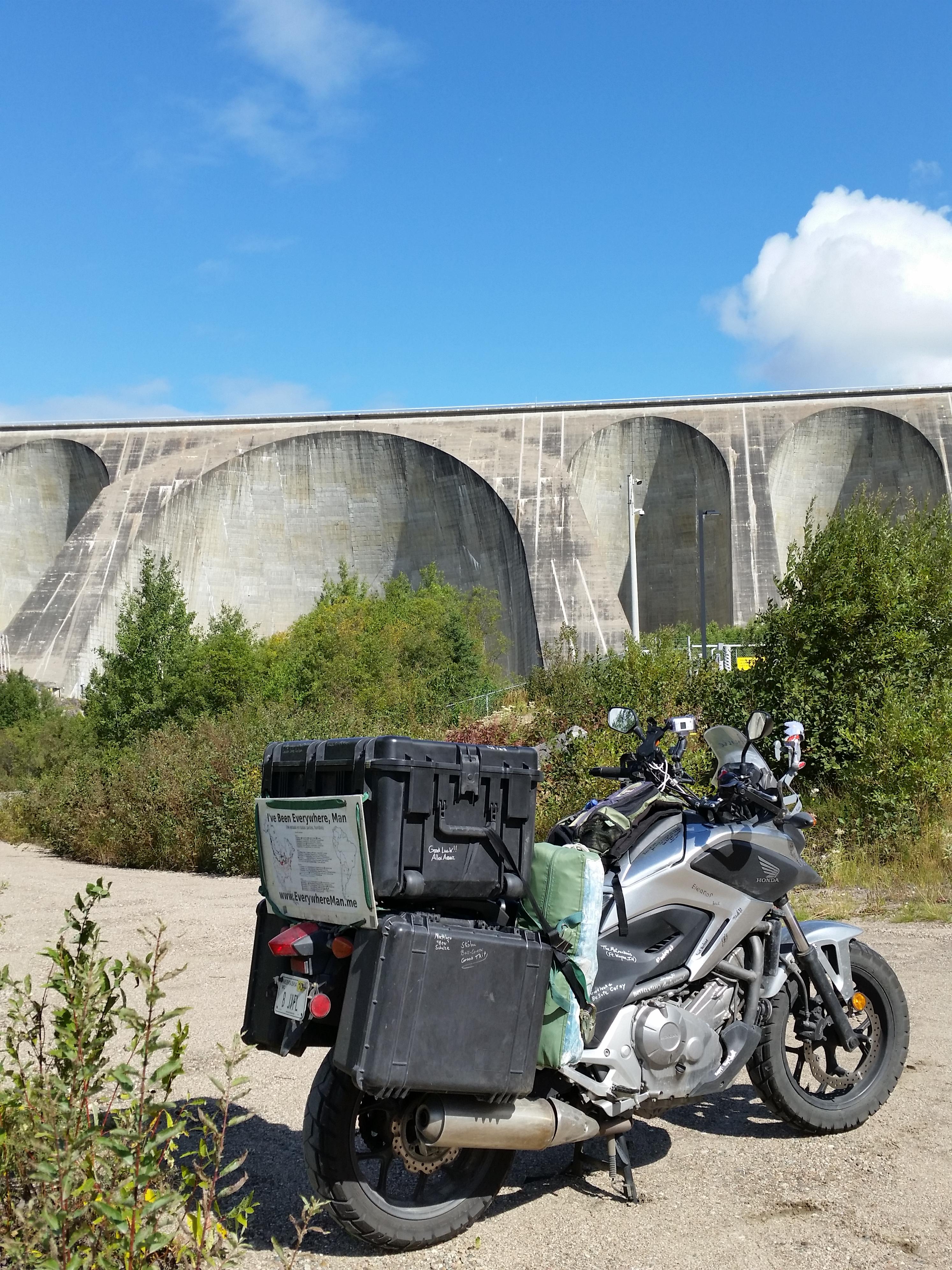 Manic-5 is an absolute monster. One of the biggest dams I have ever seen. My pictures didn’t really do it justice, but I’ll have another chance on the way down. It unfortunately marks the end of the hard surface. Continuing on the pitted gravel road is much less fun. The rain from the previous days was actually helping matters, keeping the dust down in many spots.

Furthermore, the dampness in the dirt makes the road easier to read, as you can see the contrast between rock and dirt more clearly. This greatly assists in choosing the best possible line. I was able to cruise around 50 mph for most of this stretch.

At Relais-Gabriel I had the most expensive fuel of my trip (equivalent to $4.99/gallon). Thankfully I needed less than a gallon, as I had just filled up in Manic-5

Hard surface returned for a bit and soon I was at the abandoned town of Gagnon. It is another mining town that dried up after its mine closed. At one point, over 4,000 people lived there. The story I got was that the mining company made an agreement that if the mine was closed, the land would be returned to its pre-developed state. Thus, every structure was torn down in 1985.

It is different than a ghost town, in that there are no dilapidated buildings in various states of ruin. Everything is just gone. All that remains are curbs, driveway cut outs and storm drains. It is really odd and a bit eerie.

Sounds like a great place to stop! I was getting chilly, so I stopped to make some tea (insert British joke here). This is another benefit of having a stove along, being able to heat yourself from the inside out. 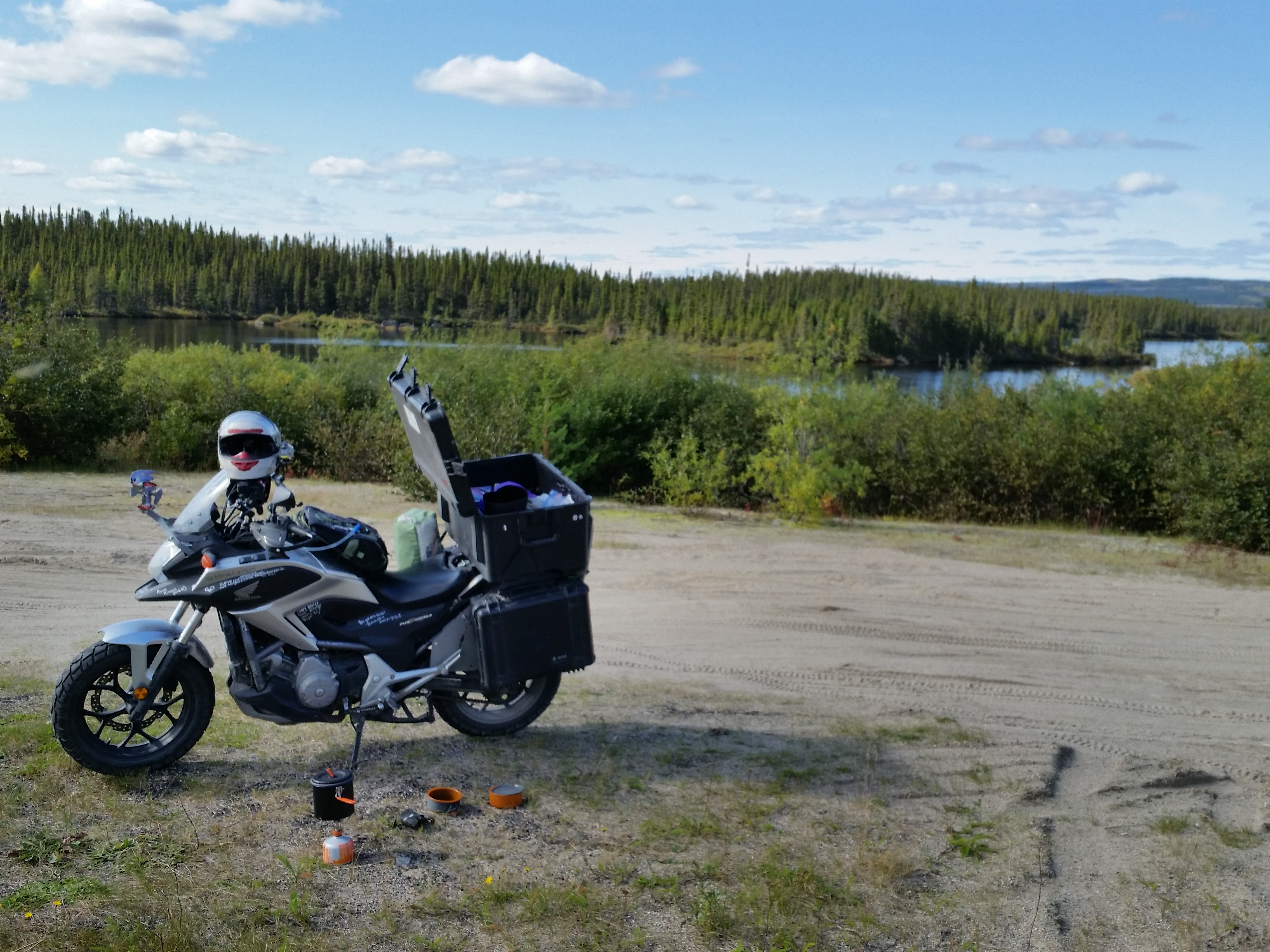 Shortly after Gagnon, the pavement ends again. This was the worst stretch of the road by far. Where there was gravel it was pitted and uneven. Where there was dirt it was wet enough to be slippery. Add to this the presence of lots of trucks on the road. In hindsight, I probably should have released some air from my tires to aid in traction.

At this point, I looked up into the sky and….you know what happens next….the clouds began to….oh, wait….there are no clouds. A rain free day! If you were to offer me this deal: You will have persistent rain for five straight days in Canada, but a clear day to tackle Rte. 389; I would have asked, “Where do I sign?”

(wow, that paragraph was an adventure in punctuation)

I didn’t have any really close calls, but I was white-knuckled for the bulk of this stretch. When the pavement finally returned, I was more than a little relieved.

The station near Manic-5 has T-shirts that read “I survived Rte. 389 (at least I think that’s what they say, it’s in French). I have to say, I didn’t think it was that bad. Maybe I just caught the road on a good day, but it was miles better than the log roads leading to Ombabika (or do you say “kilometers better” here?), and also better than the rocky path leading up to the Salmon Glacier.

After a few dozen more kilometers, I crossed into the province of Newfoundland and Labrador. The former is the island off of the east coast of the continent, the latter is where I was now. I would be in Labrador until I was at Schefferville’s doorstep.

At this point my trip ended, in a sense. I had my first significant completion. As I entered the province, I also entered into Atlantic time zone, the sixth and final time zone that I will visit. Though the east coast of Brazil sits significantly further to the east, its time zone is the same as Labrador’s. So thank you for reading my blog. It’s all over now. You don’t have to go to facebook, but you can’t stay here.

I passed through Labrador City, but that was not the home of my hosts. Gord and Bev live in the town of Wabush which is just a couple miles down the road. The area is known as “Labrador West”, I assume because there is absolutely nothing else on the west side of Labrador.

Just to reintroduce the connection: I fortuitously met Kevin and Catherinanne at a rest stop in southern Ontario. We got to talking and really hit it off.

I told them about my travel plans and they said that they used to live in the Labrador West area. I asked them about finding a place for me to keep Annie as I took the train to Schefferville. Instead, they found a couple who were either so crazy or so generous (I wasn’t sure which one) that they would host me for my whole time in the province. Friends of theirs: Bev and Gord.

Bev was out golfing, but I was welcomed warmly by Gord. He ushered me down to their basement, showing me my luxurious accommodations. While I took my first real shower in a week (my goodness, what a great shower), he cooked me up an amazing steak dinner. I don’t think I’ve ever had a restaurant nail “medium rare” like he did. 🙂

Bev returned home, greeting her disheveled stranger of a guest with a big hug. She was a welcome addition to the conversation and I enjoyed hearing her back story too.

OK, I have to write aboot this. I hope they won’t mind:

One of the things I really enjoyed about Labradorians was their accents. It is such an interesting mixture. I’ve never really heard anything like it. It has some of the northern vowels, so “about”=”uh-boot” and “sorry”=”sew-ree” (not quite that exaggerated though). But they also possessed some vowels that sounded Irish. “Might”=”moight” and at least sometimes “boy”=”bye”. Gord and Bev’s daughter, Kim, referred to me a couple times as “Brett-Bye.” It really made me smile. 🙂

There were also some interesting consonants, sometimes “thing”=”ting”. Bev also had a unique way she would say “yeah” sometimes. She would say it while breathing in. I’ve heard this before, but only from native Scandinavians, so it was a surprise to hear it here.

Now let me say this: I talk really funny too, but only with one word: Newfoundland. It took me the full duration of our stay together to get the pronunciation even close to correct. I entered the province saying something like “NEW-fn-lund”, where the right way is closer to “new-fund-LAND.” It rhymes with “understand” and has the same emphasis and cadence.

I like to analyze a little bit. Can you tell?

I joked earlier that my hosts were either crazy or generous. It turns out that they were actually crazy generous. Their help would become even more vital over the next couple of days.

OK I think we’ll end chapter 2 their. In the next episode I will step foot on a funny old train heading north.

Part 3 is up HERE

Real time update: I’m in Nova Scotia. As soon as I hit “publish” I will be heading towards the Hank Snow museum in Liverpool, about an hour away. They actually have a motorcycle show today, because…of course they do.

Happy birthday, Brother. You are like a fine wine but less fruity. 🙂

4 thoughts on “Sights on Schefferville, Part 2”