…but first some eras have to end. Two streaks of 33 years and one streak of 10 years fall as we enter New Brunswick and Nova Scotia.

Thursday, September 14th (cont.)
I crossed into New Brunswick as evening was approaching. I had never been to this province before, so this would be the first 33 year streak to end this day.

I was immediately welcomed by two encouraging sights: Faster speed limits and cheaper gas. The welcome center on the border was closed but I tried to get some wifi off of the building. I wanted to see if there was a free campground in the area. I couldn’t connect unfortunately.

I had been riding all day, but because of taking the long way around the St. Lawrence I had only covered 95 miles as the crow flies!

I decided to pull off on the next gravel road saw, which then connect to a sparsely maintained trail which climbed steeply. Off of this I found an overgrown path which led to a perfect spot for my tent. The search took less than 5 minutes. 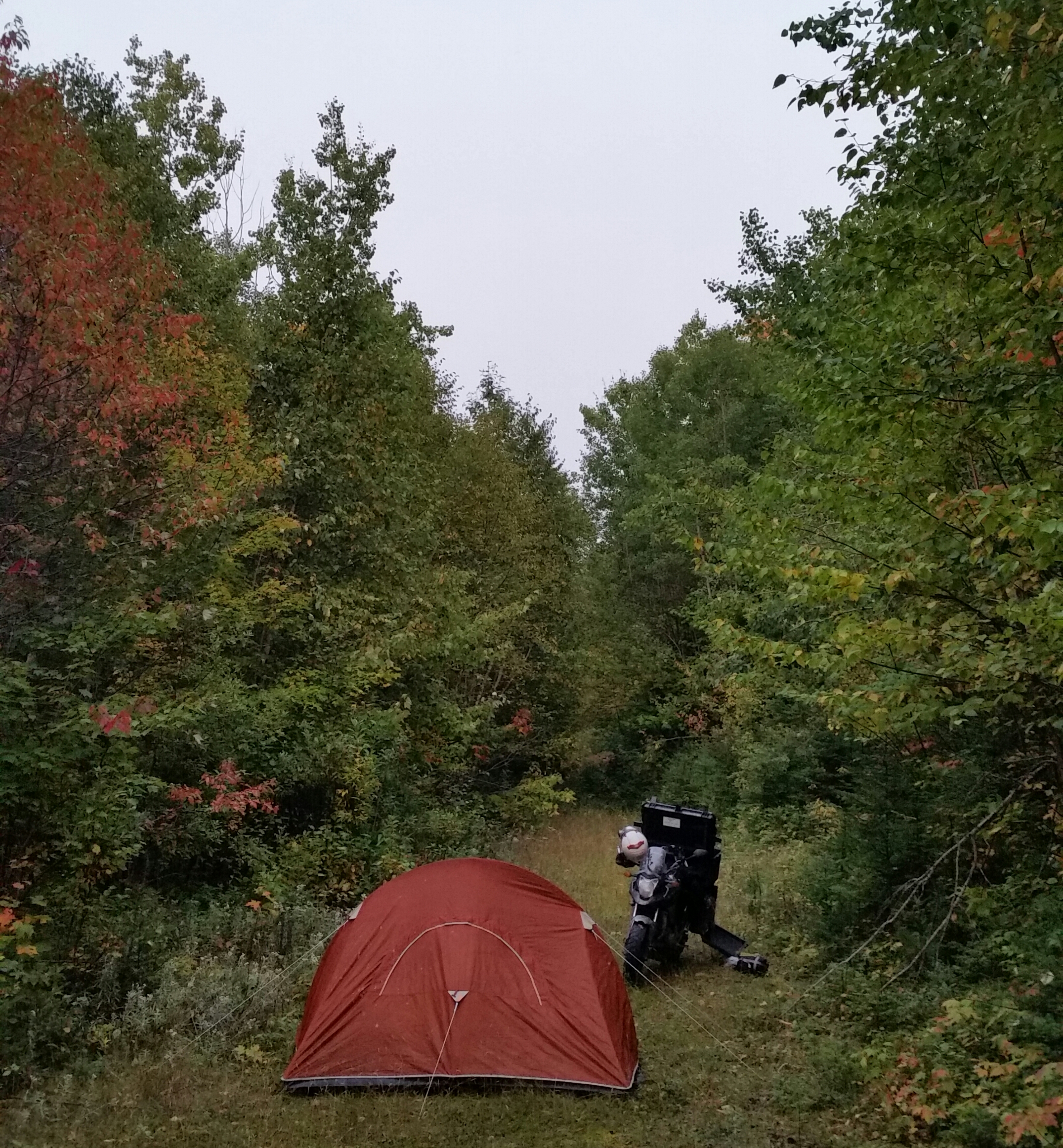 I thought there was very little chance of me being disturbed, since it would take a fairly capable vehicle to even reach my spot. I fell asleep quickly and slept soundly.

On the west side of Quebec, where it meets Ontario, there is a well defined line for the preferred language. On the east side of Quebec there is a linguistic buffer zone. This zone is called New Brunswick. If any state/province/country needs a good example of how to make bilingualism work, this province provides a great example. There is no other place in Canada where French and English coexist so naturally.

I awoke chilly but rested. As I packed up and rode back towards the main road, I noticed a neat transition. My path consisted of four different surfaces getting progressively smoother as I went.

I stopped into a Tim Hortons for some wifi and Honey Crullers (might be my favorite doughnut ever). I was unsure of how to order, but the couple in front of me used English. I, in turn, greeted the cashier with “good morning” which seemed to surprise her a little. She informed me that this part of New Brunswick (NW side) is primarily French speaking, but it would become more English oriented as I crossed the province.

Though I was spending most of the day on the freeway, the scenery was pretty good. It was not an ideal motorcycle road, lacking the twists and turns, but it would be great drive for an RV or trailer.

I had a leaf, aquired near my campsite, hang on for nearly 200 miles: 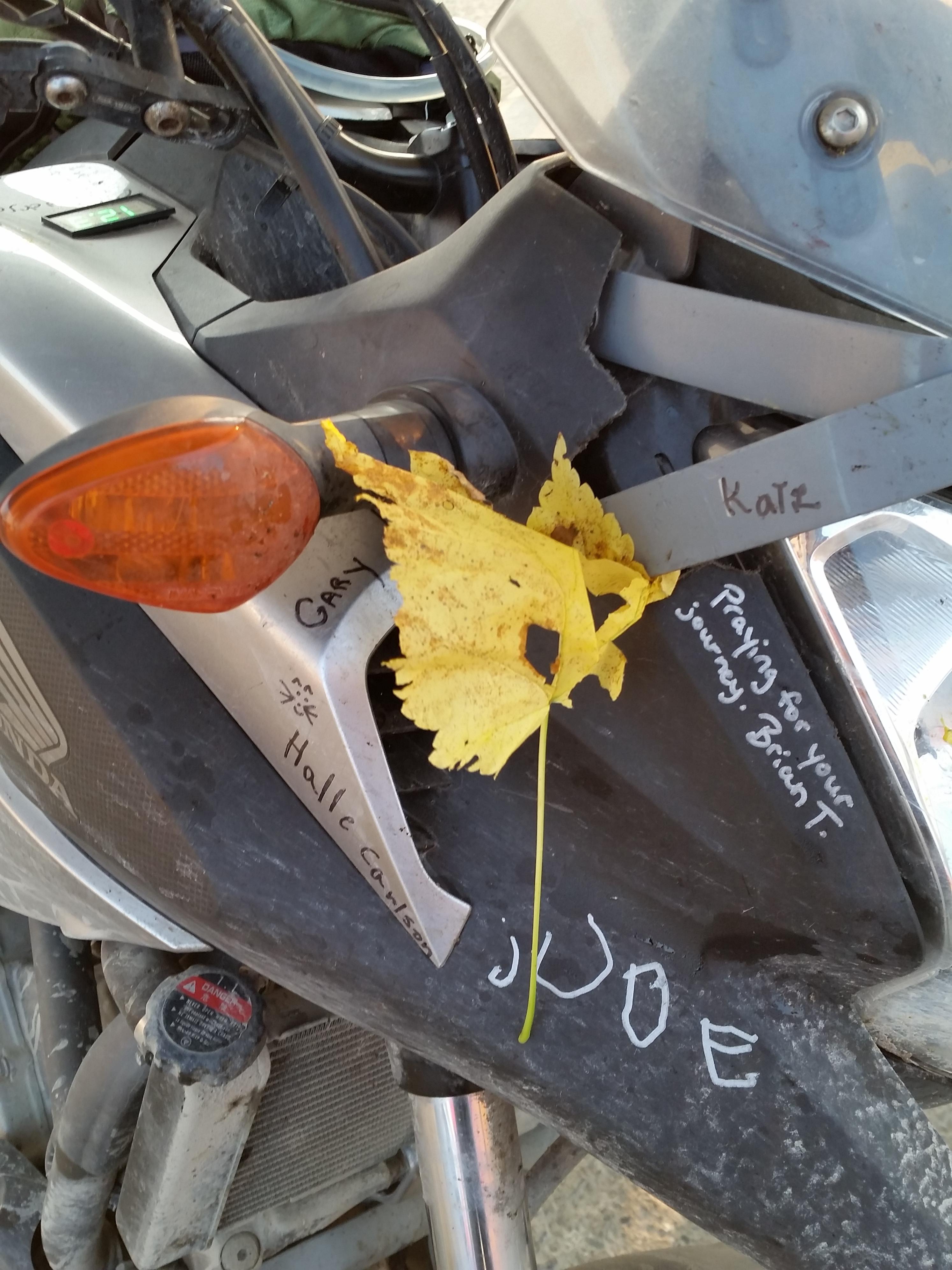 I felt a little hurried, wanting to make it to the Hank Snow museum in time for the motorcycle show the next morning. Needing fuel, I made a short detour into the town of Nackawic. The sign on the interstate boasted that the town had the world’s largest axe. OK, I’ll bite.

Does this post make my axe look big? #everywhereman

I crossed the border into Nova Scotia. Another first for me. Another 33 year streak ended.

They had a nice welcomce center where I acquired some good maps and information about the area. There was free wifi, which I used to set sights on a free campsite for the night.

For some strange reason, the main highway leading to Halifax required a $4 toll. This was one of the last places I expected to see a toll road. Anybody who knows me well knows that I have an extreme aversion to paying tolls. In 2011 this aversion led to an interesting experience in a tunnel in western Italy (but that’s another story).

Knowing I needed to continue to make progress, I just paid it.

I stopped for some supplies on the outskirts of Halifax, then continued to the free campsite I had researched earlier. It was already late in the day, but the place sounded like it would work well…..not so much. It was pretty much just a gravel parking lot right next to a main road. It was not an option.

Now I had a problem. Where do I go? I was boxed in by the coast. There was little countryside to be had here. Darkness was beginning to creep in and I had no nowhere to go.

My attitude took a sharp divebomb for some reason. I asked myself what I was doing here. I could be in my home country, with a new tire and a 4G data connection. Why had I come?

But for some reason, it felt important to visit the museum. I couldn’t say why just yet.

Getting desperate, I whipped into a church parking lot that looked fairly secluded. I found a little walking trail on their property and decided that it was just wide enough to set up my tent. I took multiple branches to the face as I tried to load my nighttime supplies in the door. 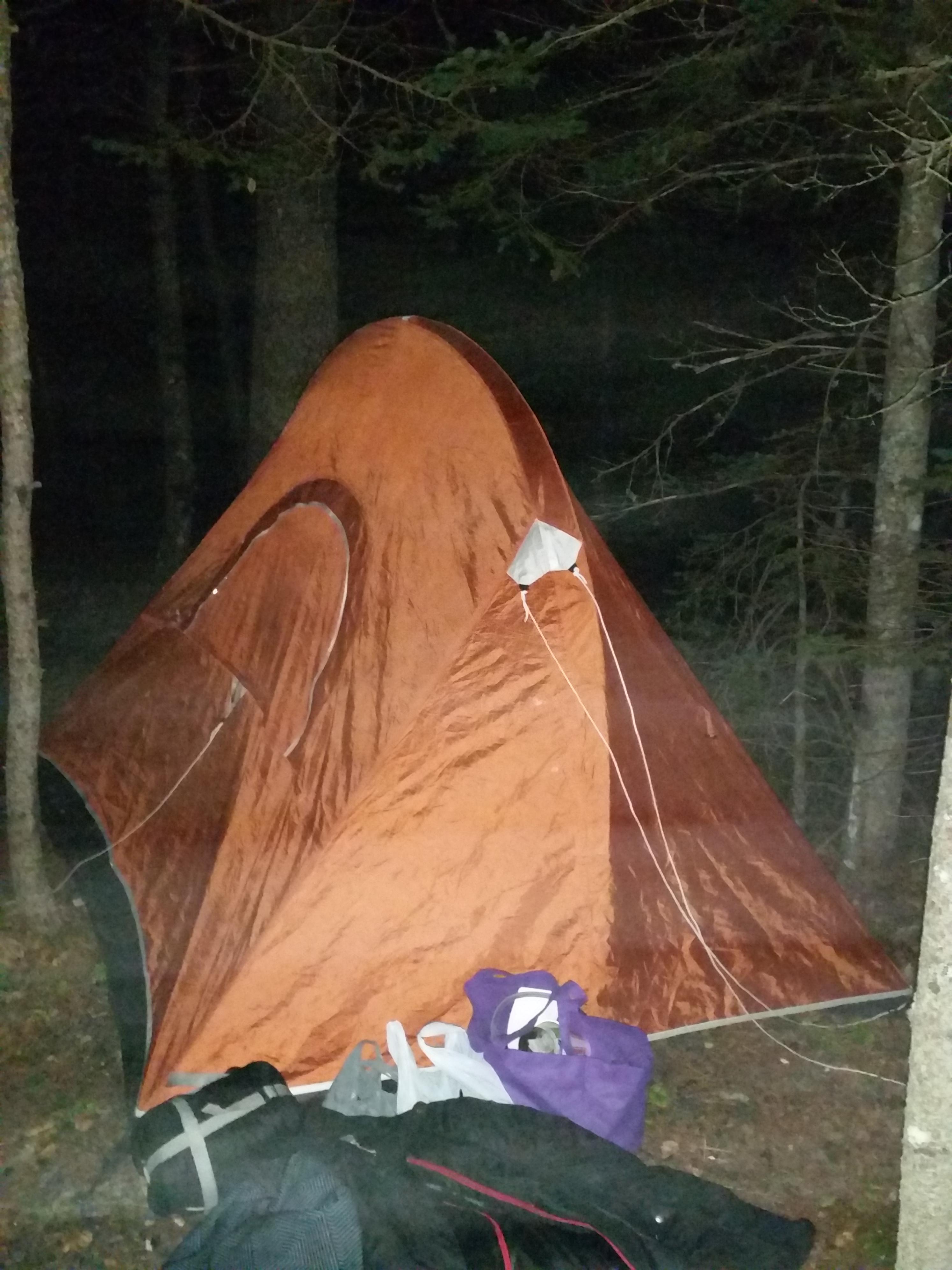 A couple of cars stopped by the church and both of them shined their lights right into the trees where Annie was parked. I had taken care to cover all of the reflectors on that side of the bike, so I remained unfound.

So one more streak had to end today, as I sat in my tent. In 2007 I swore off of Raman noodles. I had gone through a stretch where they were my main source of sustenance and could not imagine eating another package. But at this point in my trip, the calories/dollar and fat/dollar numbers were too good to pass up. 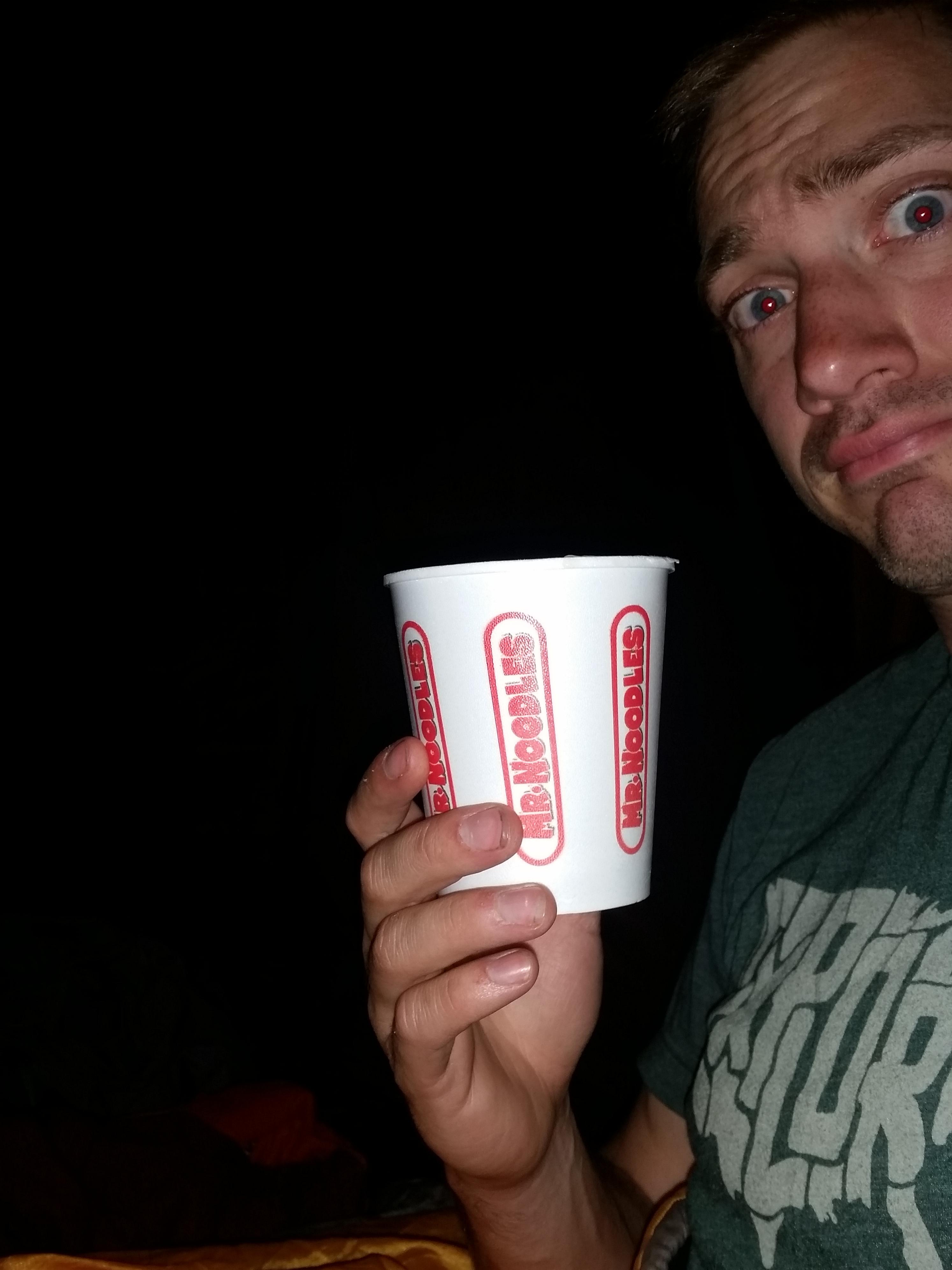 I don’t think I need to say anything else about it. This picture is sufficient.

I was up and at ’em before 5am, wanting to get out of my spot early. Morally speaking, I couldn’t decide on how I should view the spot I had chosen for the night. Was it better, since I am “part of the club”, so to speak, as a Christian? Or was it worse, since I was trespassing against an entity that exists to help people?

There was thick fog in the air. It was almost as if rain was hovering instead of falling. I only rode a short distance before deciding to stop for some internet. My wifi test in a McDonald’s parking lot revealed a booming signal coming from a public library across the street. It was closed, of course, but I was able to get my fastest internet speeds in Canada from the parking lot. 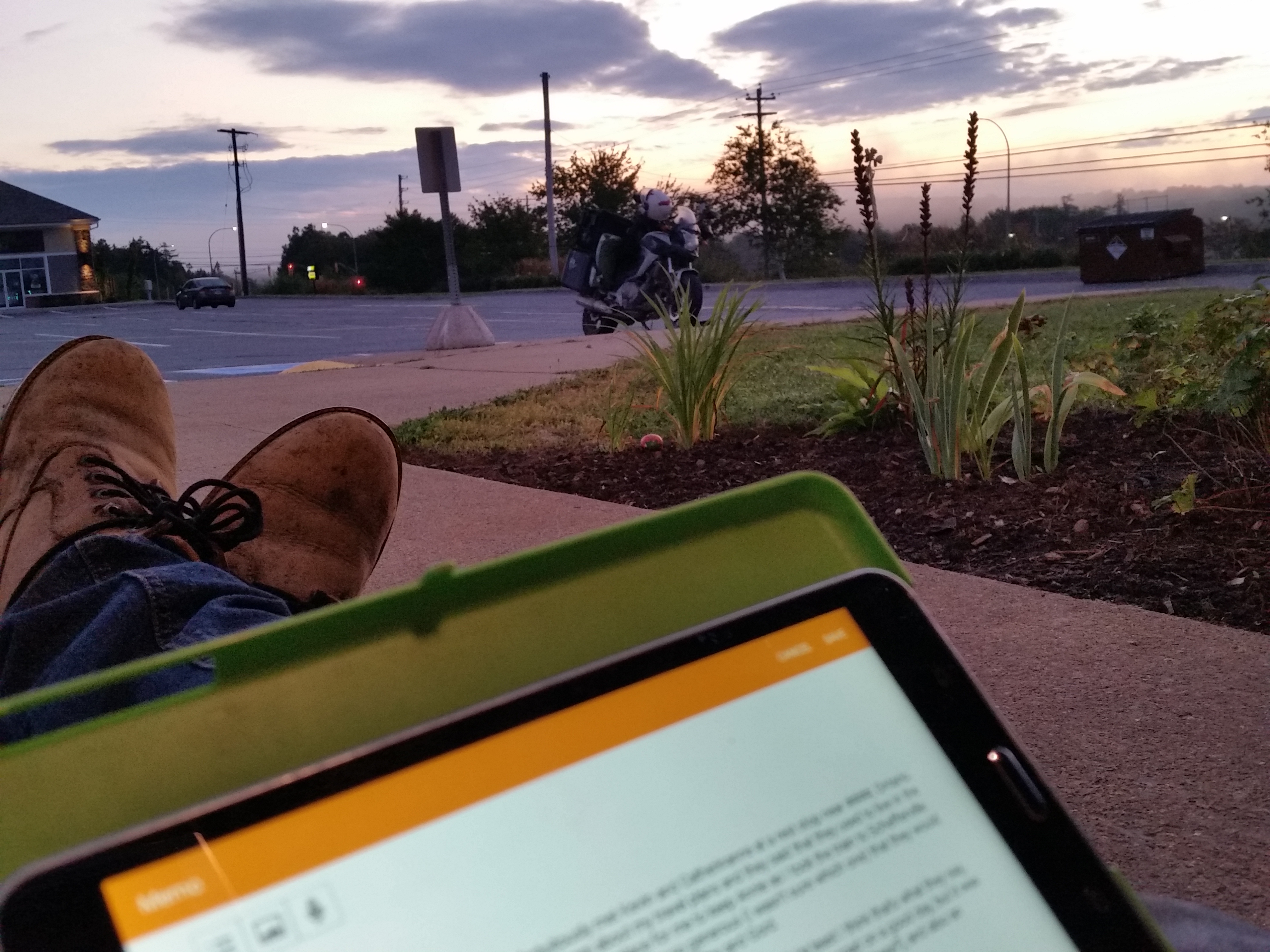 I wanted to see what all of this fuss about standing desks is about. 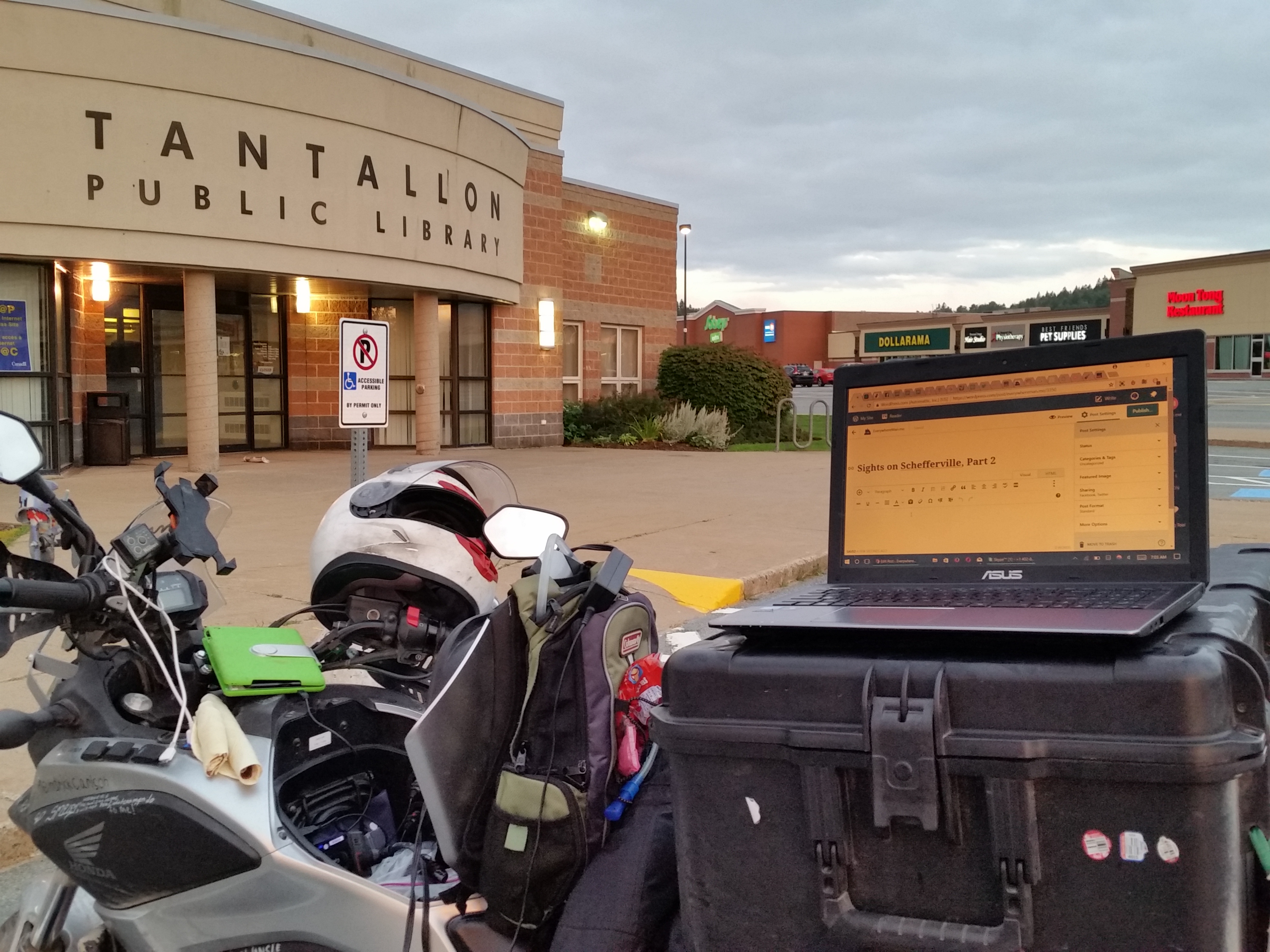 It was a peaceful sunrise

I finished a full blog post before heading down the coast towards Liverpool.

This trip will feature many ends and beginnings as I go. Most of them are unexpected. Although, I think these days represent my last noodle-associated end.

Realtime update: I’m not doing the best right now. Not sure if it is mentally or physically related. Being behind in my writing causes me some stress, as I fear losing memories before they are recorded. I’m trying to find the right pace for this portion of the trip, but haven’t found my stride yet. Thanks for reading, though! You all brighten my day!