I met such wonderful people in Pittsfield that I could hardly keep my clothes on. Wait, is that a saying? People say that, right?

I was rolling at sunrise from my secluded spot in the Catskill Mountains. No other vehicle had passed on the road the entire time I was there. The morning was chilly, perhaps my coldest one of the trip, but I did not have a cell signal to check the temperature. Sometimes ignorance is bliss!

I began down the mountain and passed a farm place with cattle. Due to a navigational error the previous evening, this was the third time I was riding by. Each time I passed, a certain hereford heifer was outside of the gate, eating hay while standing on the road. She would see me coming, then quickly duck back into her pasture. It made me smile each time.

I chose a scenic route to get to the next place on my list: Pittsfield, Massachessetts. However, I was unable to glimpse much scenery. Thick fog had settled in and showed no sign of clearing out.

Is this the bridge to heaven?

As I was close to leaving New York, I felt quite proud of myself. I had traversed nearly every corner of the Empire State and had yet to pay a toll. This is perhaps the most impressive feat of my journey so far! Unfortunately, the streak had to end at the Rip Van Winkle Bridge over the Hudson River. After crossing, I soon found myself in the Bay State.

Pittsfield is the largest city in Berkshire County, the westernmost county in Massachussetts. It is common for residents to refer to area at large as “The Berkshires.” (“shire” rhymes with “were” not “wire”)

I was needing an inconspicuous spot to remove my thermals so I pulled off on some tire tracks near the airport. Following them further lead me to an absolute ideal camping spot. It was covered, flat, had decent scenery, only accessible by motorcycle and a long way from any house. This put my mind at ease, knowing I had my accommodations figured out….or so I thought.

I began to trundle around town. Most places I visit, I arrive with at least some semblance of a plan. For Pittsfield, I honestly had nothing. I decided to head to the library. I was behind in my writing and needing to do some research, so I thought I would spend a number of hours there. The building was nice and the people were friendly, but the internet was hardly usuable. I decided to move on after only about half an hour.

I began riding around again. As I waited to turn from Maplewood onto North Street, my story took a turn as well. I noticed a motorcycle behind me (a BMW 650) as I sat idling, so I gave him a little wave. He then proceeded to pull up beside me. That is how I met my new friend, Prashad.

Motorcycle conversations are always a bit hectic, but we shouted pleasantries through helmets and above engine noise. He asked me about my travels and told me my bike looked like it was from Vietnam. (A compliment? I chose to take it as such).

Furthermore, Prashad pointed to the coffee shop on the corner and invited me to join him there. I made a quick detour and ended up parking much further away than necessary, but eventually joined him inside.

Prashad is originally from Sri Lanka, but has spent time in Dubai, Vietnam and now Pittsfield. (That seems like the logical progression, right?) He has quite a story!

He was sitting with another friend, Brian. I introduced myself and began to tell my story. When asked about accommodations, I began to pronounce the word “tent.” Before I even had a chance to articulate the second “t”, I had an invitation to stay at Prashad’s place.

I also learned that he was going out with friends in the evening and he welcomed me along. He had to return to work (he was just on break), but he said I could get cleaned up at his place. (I think it had been five days since my previous shower in Holley, NY).

Brian was really friendly too. He has lived in Pittsfield for “half of his life” and was well equipped to suggest places for possible photos. He said that he would be happy to help after he was done with work.

Wow. That was some turn lane.

Prashad swung by his place to let me in before returning to work. The shower was great. I felt like a new man.

I did some picture scouting and writing during the afternoon, as well as getting my sign picture.

Meeting wonderful people in #Pittsfield. I have a place to stay! I may be going dancing tonight, so please pray for me. #everywhereman pic.twitter.com/NVj35RNqH8

Then I met up with Brian in Park Square. I wanted to bring Annie up to the fountain for some pictures, but expressed a little hesitation. I knew the police station was less than a block away. Brian assured me, “People kind of know me around here. I’ll just tell them it was my idea.”

If I’ve learned anything from my time in the northeast, it’s this: You can do whatever you want as long as you put your flashers on. 🙂 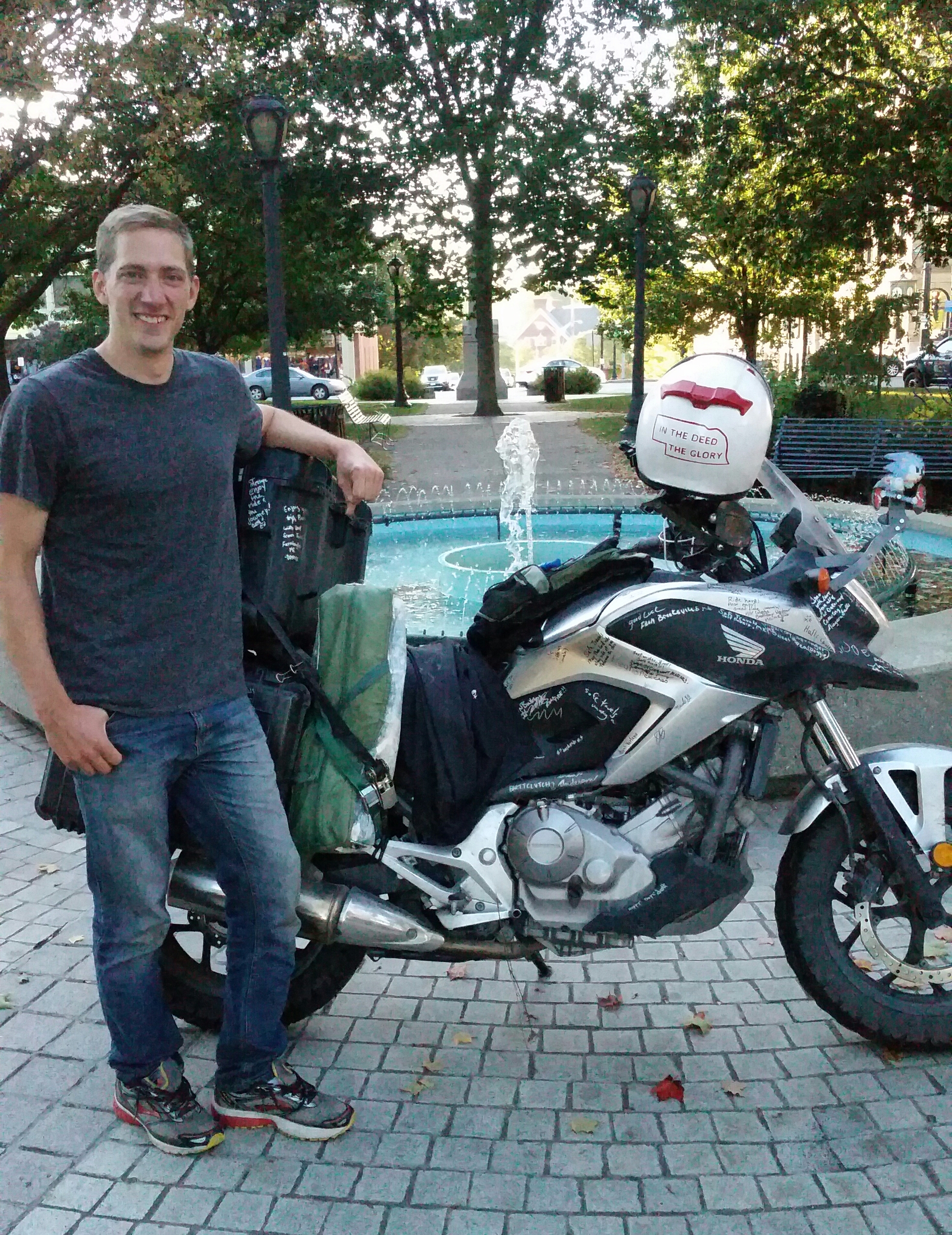 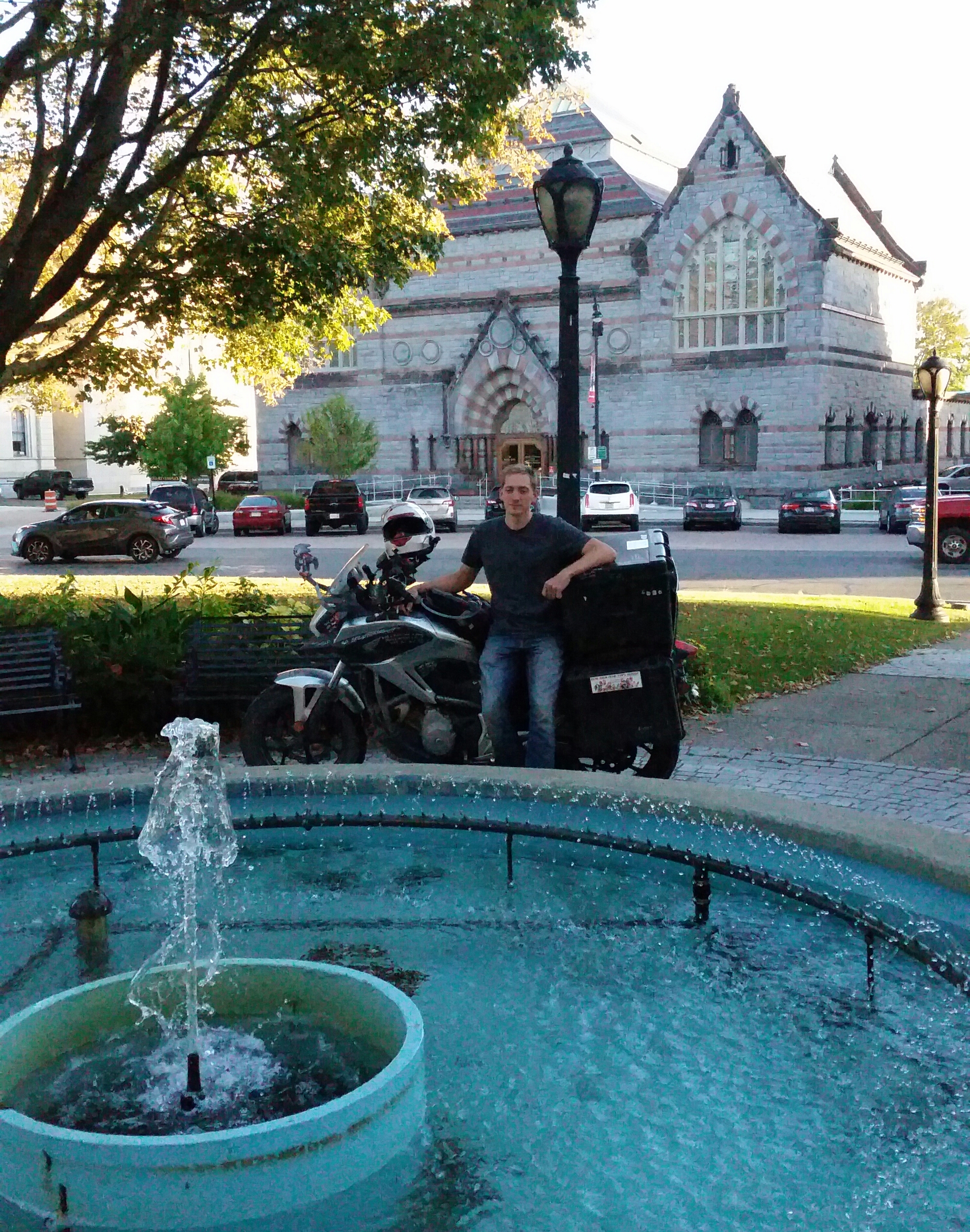 Next up was to visit the Herman Melville house, called Arrowhead. He was living here when he composed his most famous novel, Moby Dick. 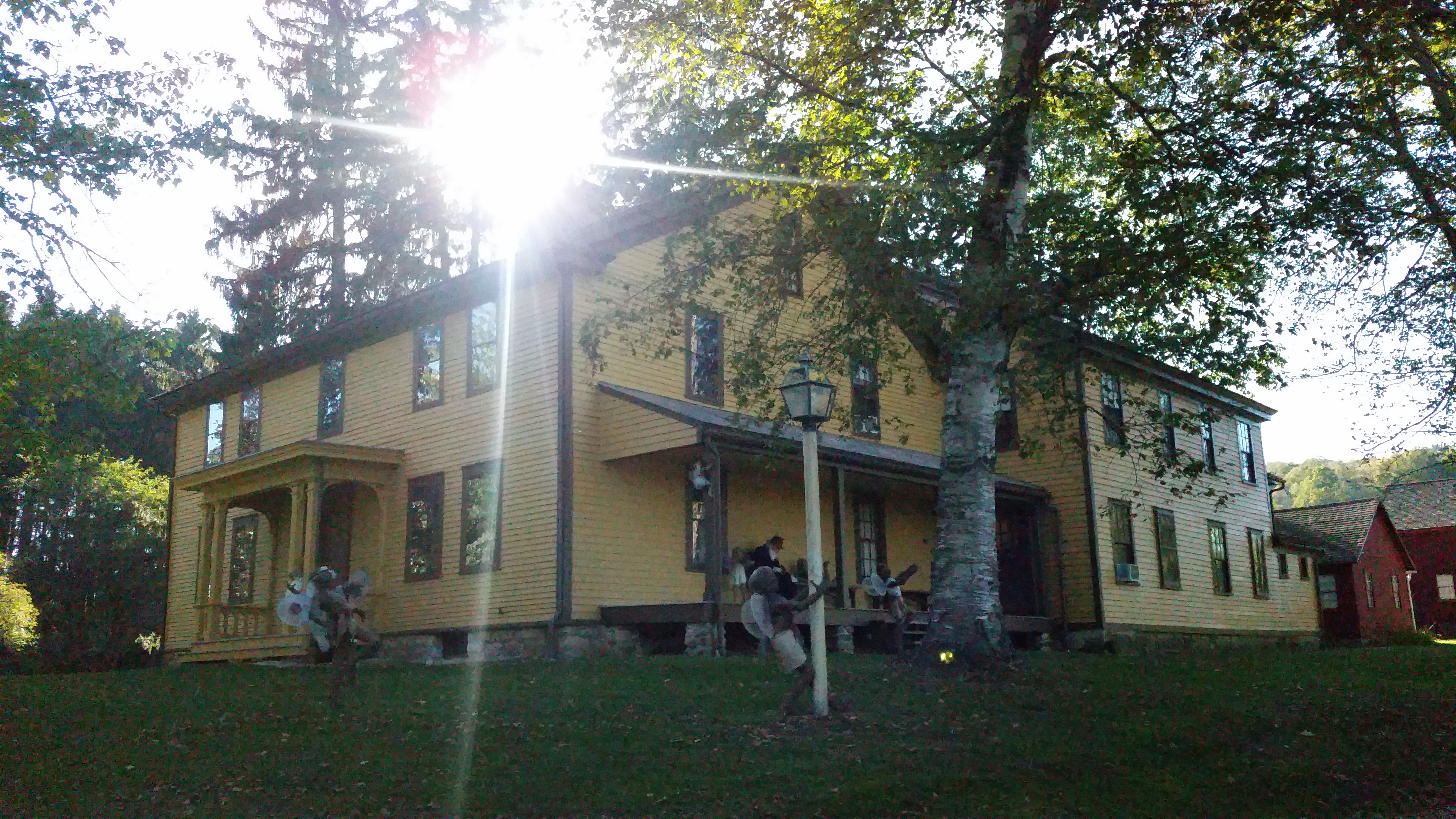 It is said that his novel was partially inspired by the view of Mount Greylock, which resembled a whale breaking out of the ocean.

"From hell's heart I stab at thee!" Place 29 of 92: Pittsfield, Massachusetts, where Mellville wrote Moby Dick. Thanks @bbissellbuilder for the pics! #intheberkshires #everywhereman

Annie’s starboard center stand began to sink, but I hopped off in time. 🙂

Our final stop was at Lake Pontoosuc.

Brian had to take off, but he still had one more job to do for me: Crossing off the Pittsfield lyric. 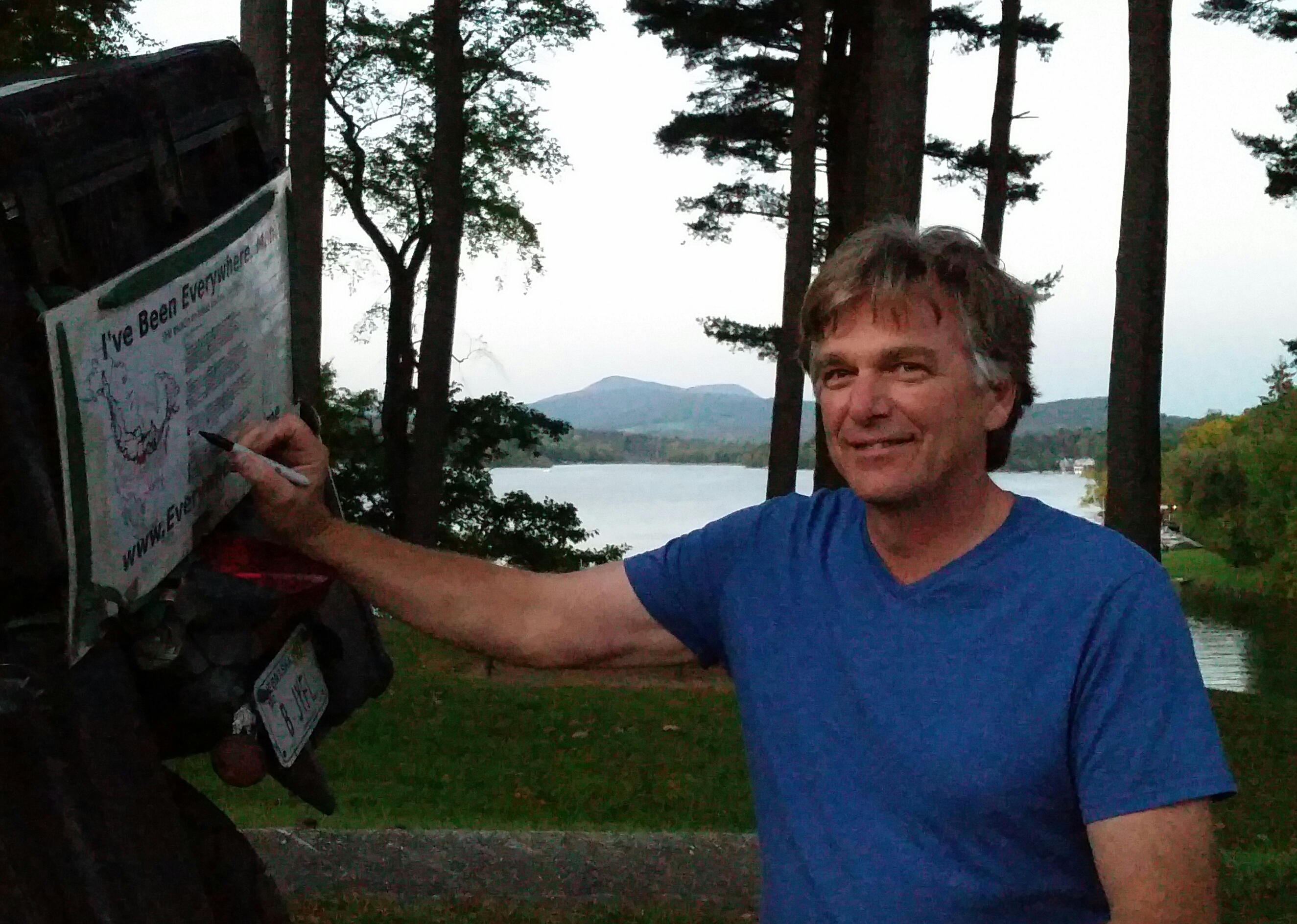 (Mt. Greylock in the background)

It was so wonderful to have his help. He has a background in photography and seemed to know how to find the right angles to make my nose look smaller. This is much appreciated. 🙂

I took a short layover at the library before it was time to meet Prashad. It was beyond 8pm. My evening is normally ending around this time, but this evening was just beginning.

We met up at a Vietnamese restaurant called Vong’s. Prashad’s friends Michelle and Lucie joined us and another friend, Kelsie was working the bar. (A recurring theme of this post is that Prashad has a lot of friends.) I ordered pad thai and a Stella Artois and began to tell my story. They listened intently and asked a lot of good questions. As I talked about future stops, Michelle and Lucie were on their phones seeing who they knew in various places who might be willing to put me up. (or they may have been playing Pokemon…I’m not sure) 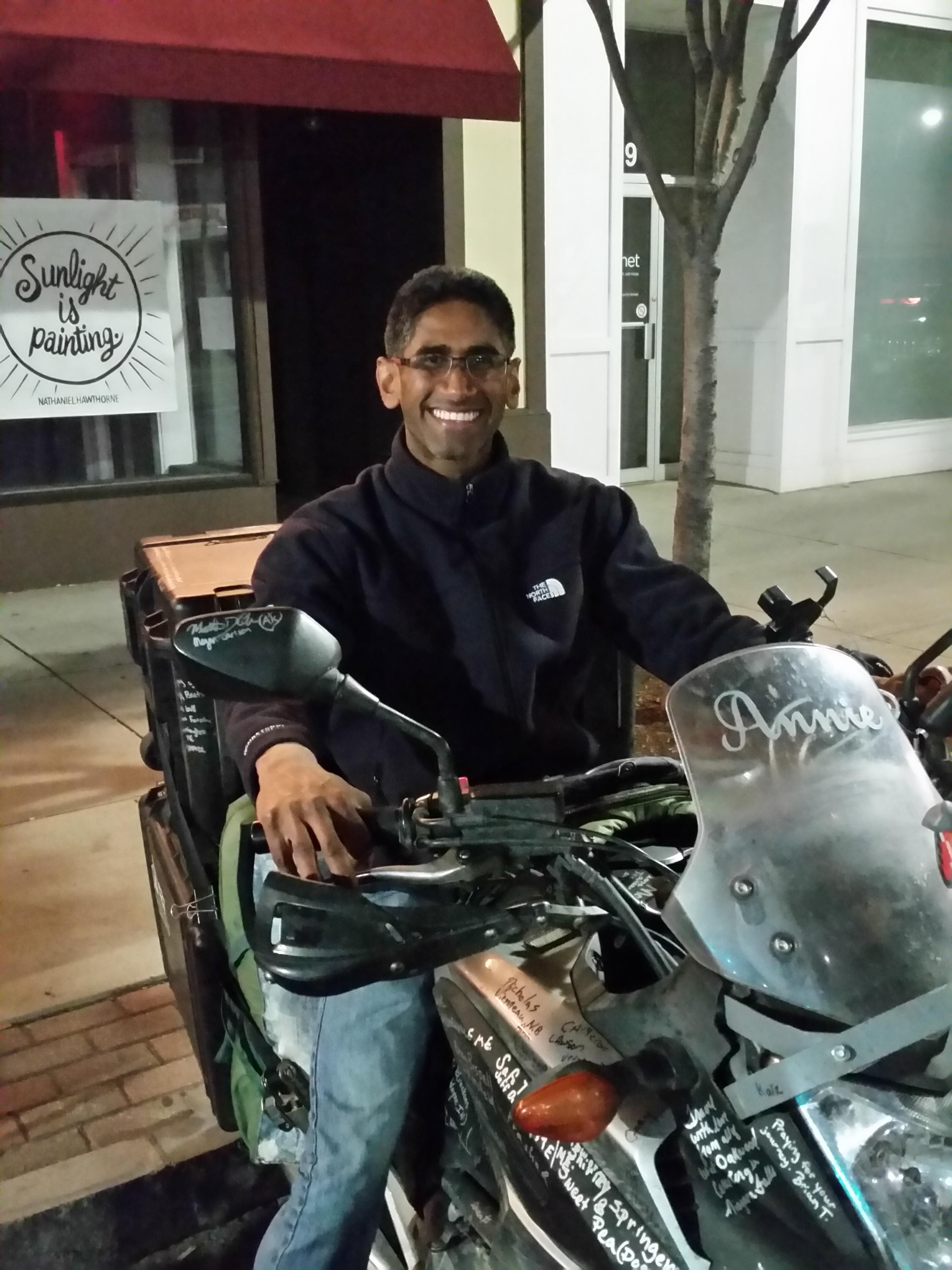 Next stop was a dancing birthday party. Sounds awkward and awesome!

OK, the following story may be considered mildly offensive and may inspire some difficult to answer questions from young ones. When I post the picture of Barney the dinosaur, you will know that the blog has returned to its regularly scheduled PG rated programming. This story is just too good to leave out. 🙂

Somebody came up with a spurious idea: Since nobody except for Prashad and Michelle would know me (Lucie had to take off), it would be funny if we pretended like I was a stripper.

Now let me say this: Regular readers of this quality publication (that’s called fabrication…or facsimile….ughhh, I give up) will know a bit about my character. I am a man of God. I am a man of integrity. I am a person who is constantly striving to become more Christ-like.

…I’m also a man who kind of likes a good joke.

As I weighed the moral and spiritual implications of this strangest of propositions, I had difficulty parsing out exactly where on the scale “impersonating a stripper” falls. Is that one of those actions that is automatic damnation (like not signaling your lane change)? But it is my hope and my belief that our God has a sense of humor. Have you ever seen a platypus?

Right or wrong, here we go….

I donned my helmet, deciding to incorporate it into my “act.” The music began and I pranced into the room. The birthday girl, Brittney, was seated in a chair in the middle of the room.

The expressions across the room ran the full gamut. Some were laughing. Some looked absolutely mortified. What had Prashad done!

My act ended quickly. I only removed my helmet and unbuttoned my jacket, before I actually told her who I was (The standard: “My name is Brett, I’m from Nebraska, I have no idea what I’m doing.”) There was a palpable sense of relief from many in the room. 🙂 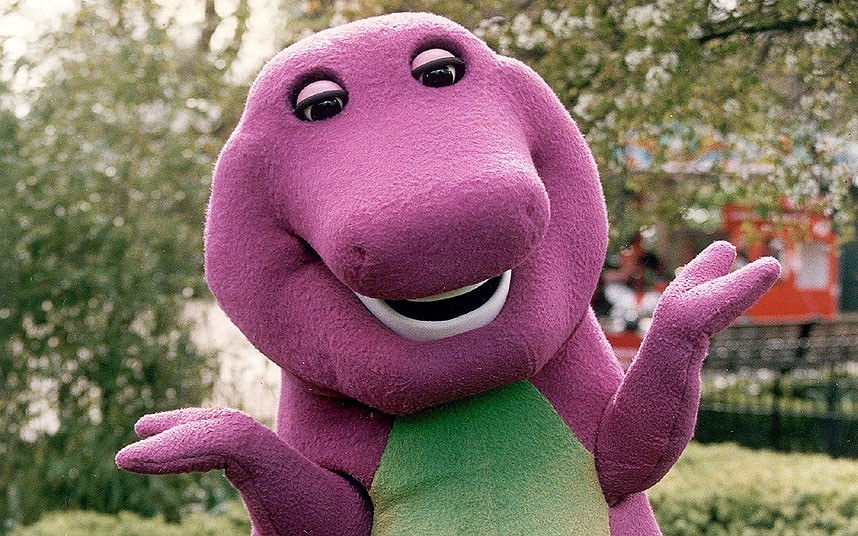 The night was a lot of fun. This whole group dances together regularly (Latin styles….as far as I could tell). It was fun to see how the whole group interacted with each other. As a song would start, there would be a bit of meandering, before eventually bumping into a random partner. They all seemed to trust and enjoy one another.

I got out there for a few numbers. I didn’t break anyone’s toes, so I’m calling it a win!

Not quite the whole crew, but some of my new friends: 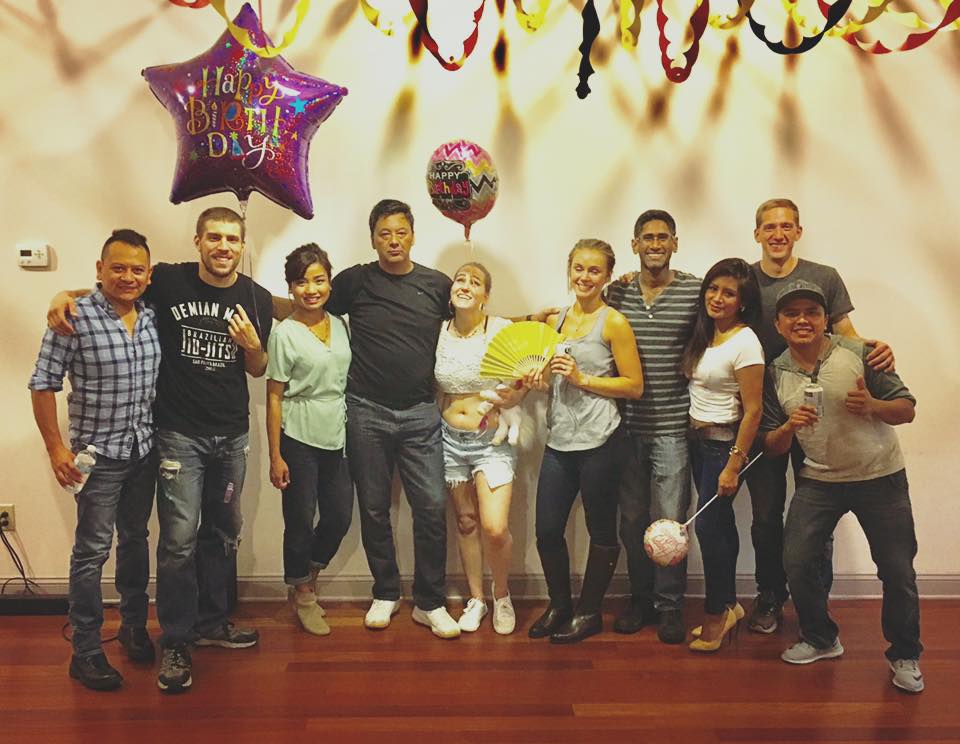 Prashad had to work at 8am, so we got a decent start to the day. He treated to me to a big, hearty breakfast which lasted me until 6pm that evening. I had one final thing to ask of him: That he cross off Pittsfield from the map. 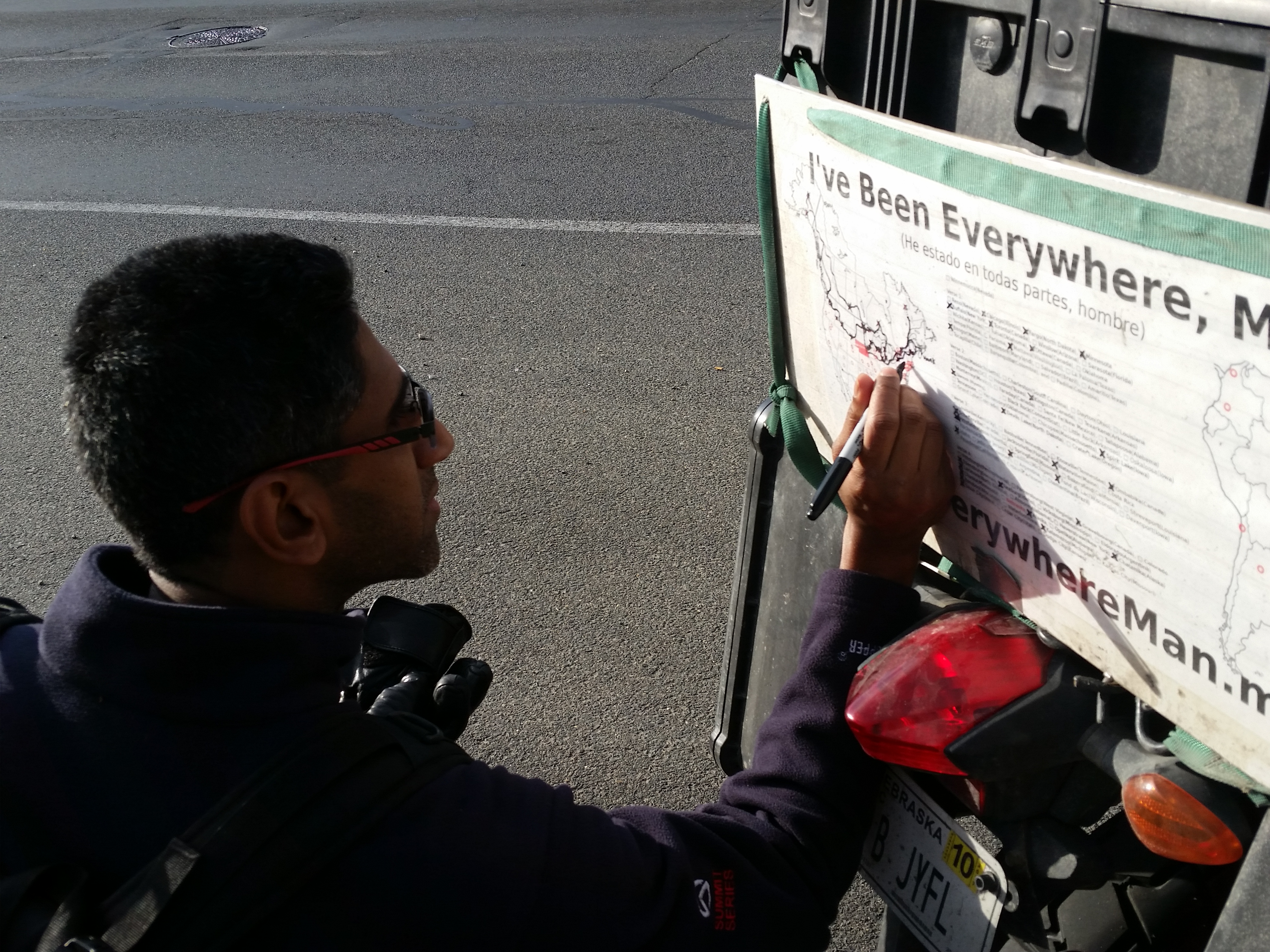 What an awesome guy! He displayed such natural generosity, like he didn’t even have to think about it. I am so glad our paths crossed and eagerly hope they cross again!

I had multiple Pittsfields to choose from as I planned out my route years ago. I can’t remember the exact logic that led me to choosing the one in Western Mass, but I am so glad I did. I guess the moral of the story is that you should always be aware of your surroundings on a motorcycle, even when at a stoplight. You never know where a friendly wave will lead. 🙂

Realtime update: Getting ready to hit the big city, NYC. I have a place to stay with a gentleman I met on the motorcycle site ADVRider. I’ll use his place to go after Haverstraw and Hackensack. As always, thanks for the prayers, kind words and general encouragement. God Bless!

14 thoughts on “Prancing into Pittsfield”