Black Rock, CT is up. Then I make my way into New York City. The Big Apple can be an intimidating place for people like me, but it was very good to me.

I got a little ahead of myself in the last post and forgot to mention a couple of things. First of all, another milestone was reached somewhere in central Massachusetts: 20,000 miles on the trip so far. Wow. Hard to believe sometimes.

Some of you may be familiar with the documentary “Long Way Round” in which Ewan McGregor (the actor who plays Obi-Wan Kenobi) and Charley Boorman ride around the world. The total of miles covered in that trip was 19,000. If they took the long way round, which way am I taking? I haven’t even finished one continent!

Another event which was carelessly omitted from my previous post was my final Boston picture. 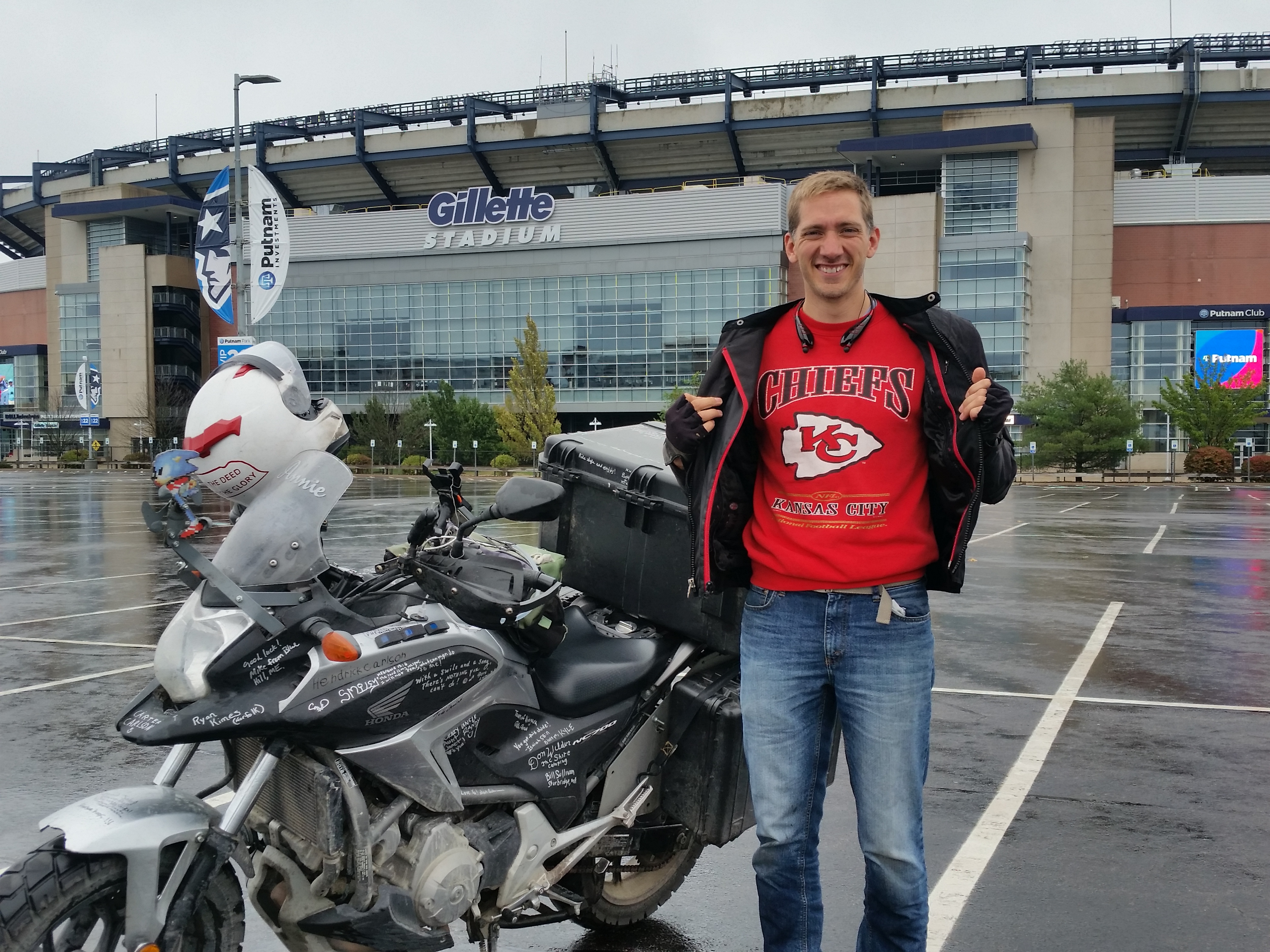 …and that’s all I have to say about that

Tom Brady was nowhere to be found. He always skips out when we make plans together.

Back to the story!

Chris in Boston had recommended a little ride along the coast in Newport, Rhode Island. I rolled down the freeway and soon found myself in The Ocean State. The houses along the coast were amazing. If you ever want to go somewhere that will make you feel poor, this is the place! 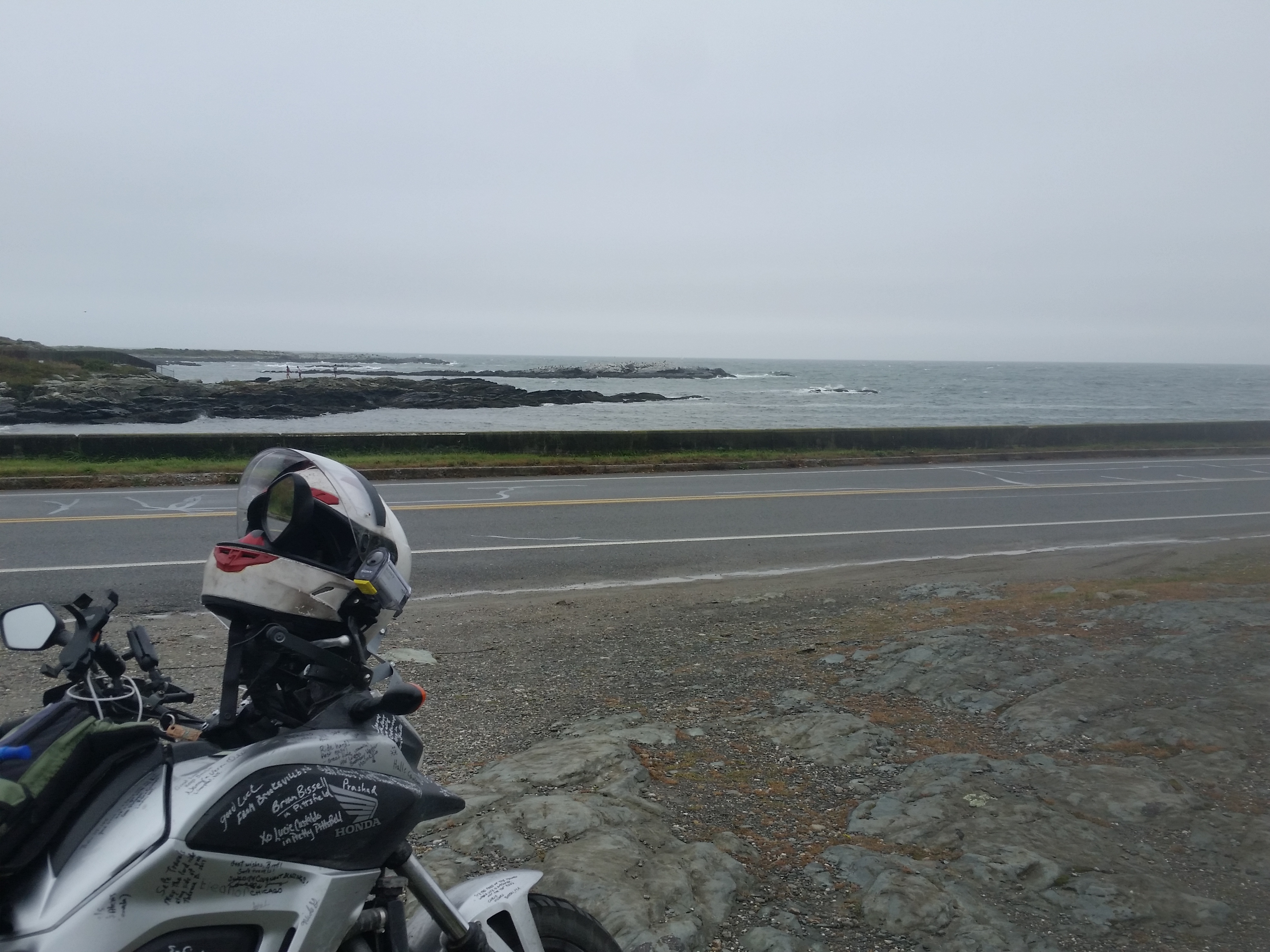 Perhaps it was fitting that here was where I hit another milestone, this one financial: $1,000 spent on fuel. I can’t say that riding 20,000 miles is the best way to spend a grand, but I can definitely think of worse ways. I may note that I have forgotten to log a few tanks along the way (just 3, I think). To combat this I wrote a correction formula for my spreadsheet that adjusts it automatically. I kind of want to tell you all about it, but I imagine that I have very few readers who share my passion for spreadsheets. So let’s move on.

I continued down I-95 into Connecticut, not making many stops. If I would have had time, the Mystic Seaport (a living museum) would have been great to see again….Next trip.

With about an hour of daylight remaining, I began to scout for a spot for the night around New Haven.  The last time I was in this state I paid $40 for a rocky patch of dirt, so I didn’t investigate any campgrounds in the area. There was plenty of tree cover right beside the interstate and I hoped there would be a break large enough for a tent. I eventually found a suitable spot but had to drive back and forth for about 10 minutes until a break in traffic emerged, allowing me to hop the curb and enter the woods unseen.

Though I was surrounded by people and vehicles, the path of headlights would never come across my spot. It was really noisy, but I felt secure.


I had a nice conversation with my parents, did some work, then went to bed.

I-95 between Boston and New York never seems to fall silent. I awoke many times in the night and was up for good at 4am. This was fine with me. I was hoping to be at my next place, Black Rock, at sunrise. Being up so early allowed for coffee and breakfast in the tent.

I had been in touch with a nice lady who had recommended a seaside park called St. Mary’s by the Sea, for the best picture to represent Black Rock. Black Rock is not really a city, it is a neighborhood in the city of Bridgeport. The neighborhood sits on the bay which also bears this name.

I rode in the dark and still had a full half hour before sunrise when I arrived in Black Rock. The park had a sign which said “permit parking only” but gave no indication about where one might obtain a permit. It also said “no motorcycles” which seemed a bit pretentious to me. 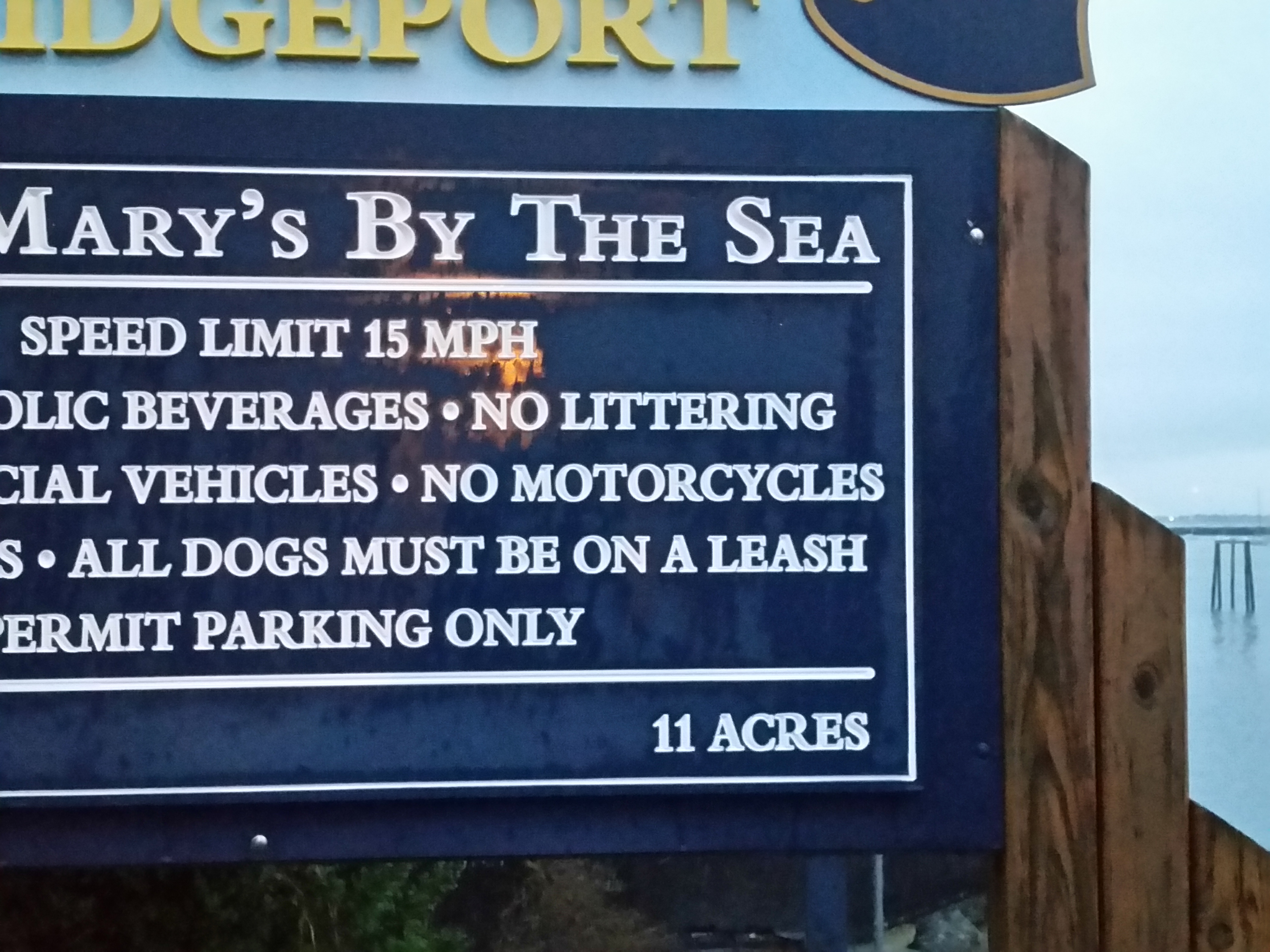 I decided to ride away and see if I could get close to the Black Rock lighthouse instead. There I was greeted by this sign. 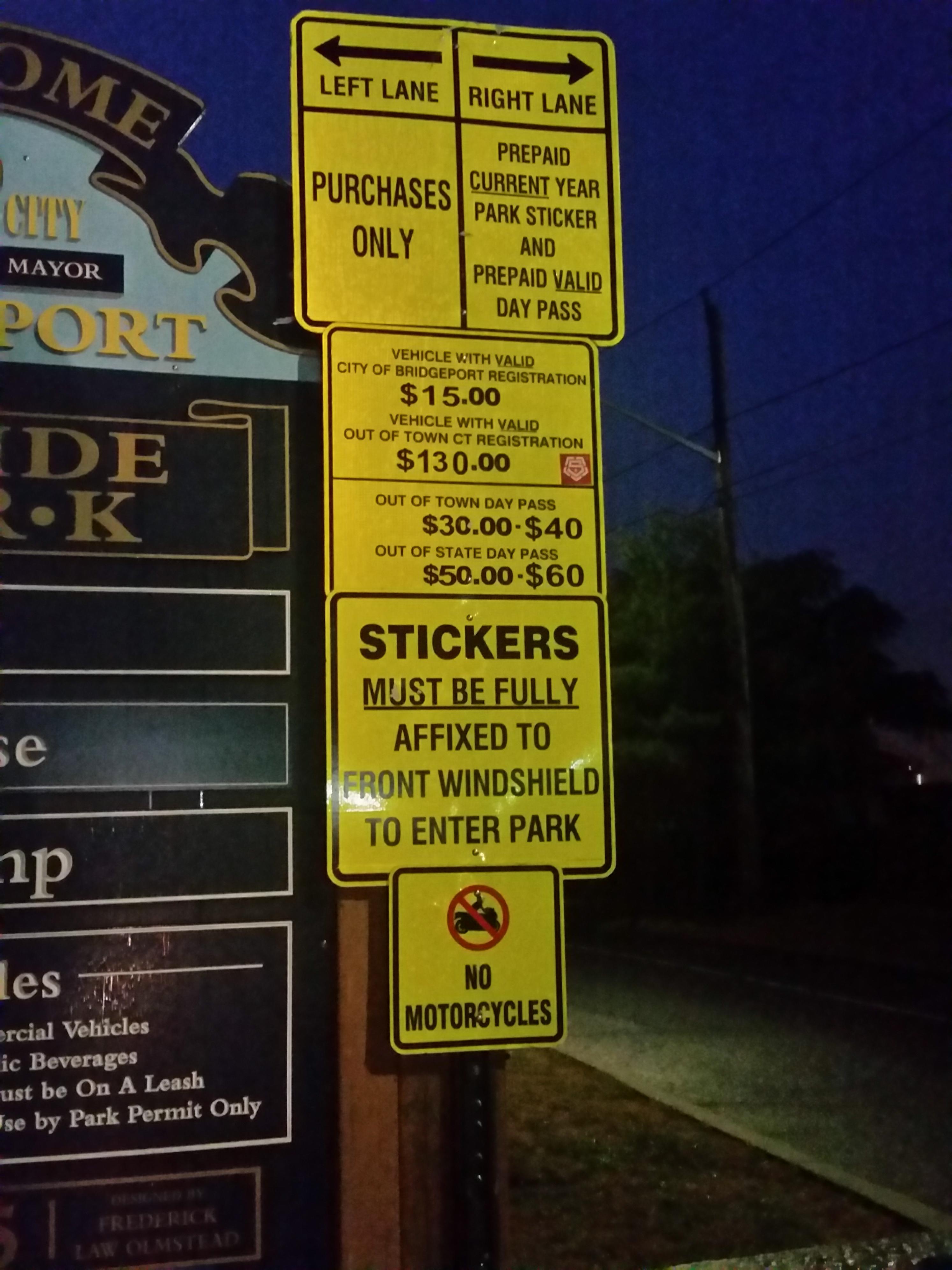 Drink it in….there’s lots to see: The overlapping new regulations, the randomly underlined words, The $50-$60 price tag for an out of state day pass, the fact that the only picture present is directed towards presumably illiterate motorcycle riders…

I could have passed around the various barriers if I had wanted to, but decided that would only perpetuate the stereotypes that the regulators apparently have about bikers. I returned to the park by the sea. Without a permit, I parked (violation) my motorcycle (violation) and began walking along the ocean.

Maybe I was just in a bad mood, but these signs really rubbed me the wrong way. I’ve met a number of Connecticut residents on my travels and they’ve all been kind, friendly and welcoming. But at that moment, rightly or wrongly, I felt judged and looked down upon because of my mode of transportation.

As light began to creep in, I could tell that the clouds were too thick for any good sunrise pictures. Shucks. I spent some time walking along the sidewalk, picking up trash that was laying about. I can’t say the act was entirely altruistic, as I did not do it with the best attitude, but it seemed like an appropriate course of action given my doubly illegal parking.

I got my pictures and got out of town. 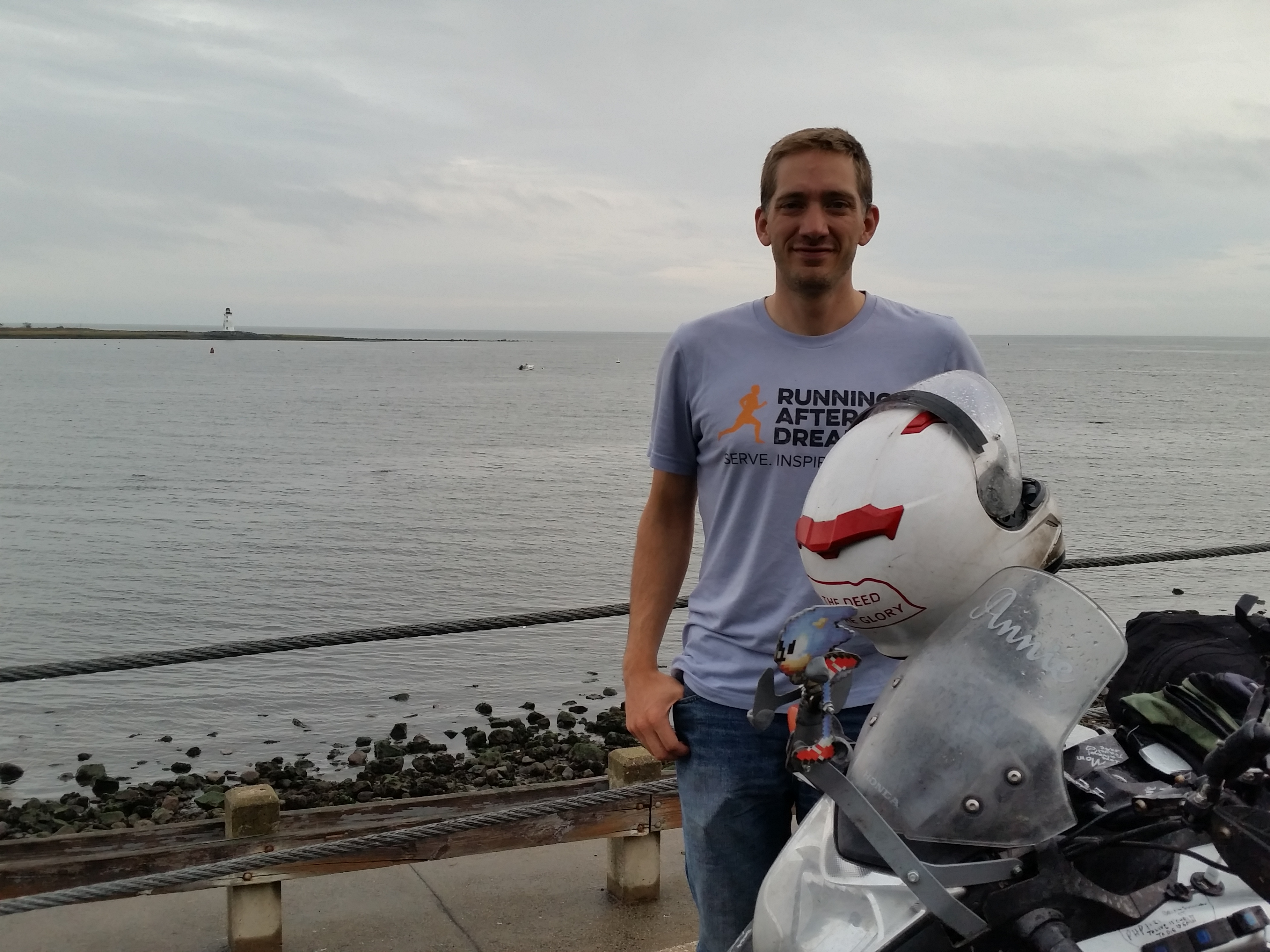 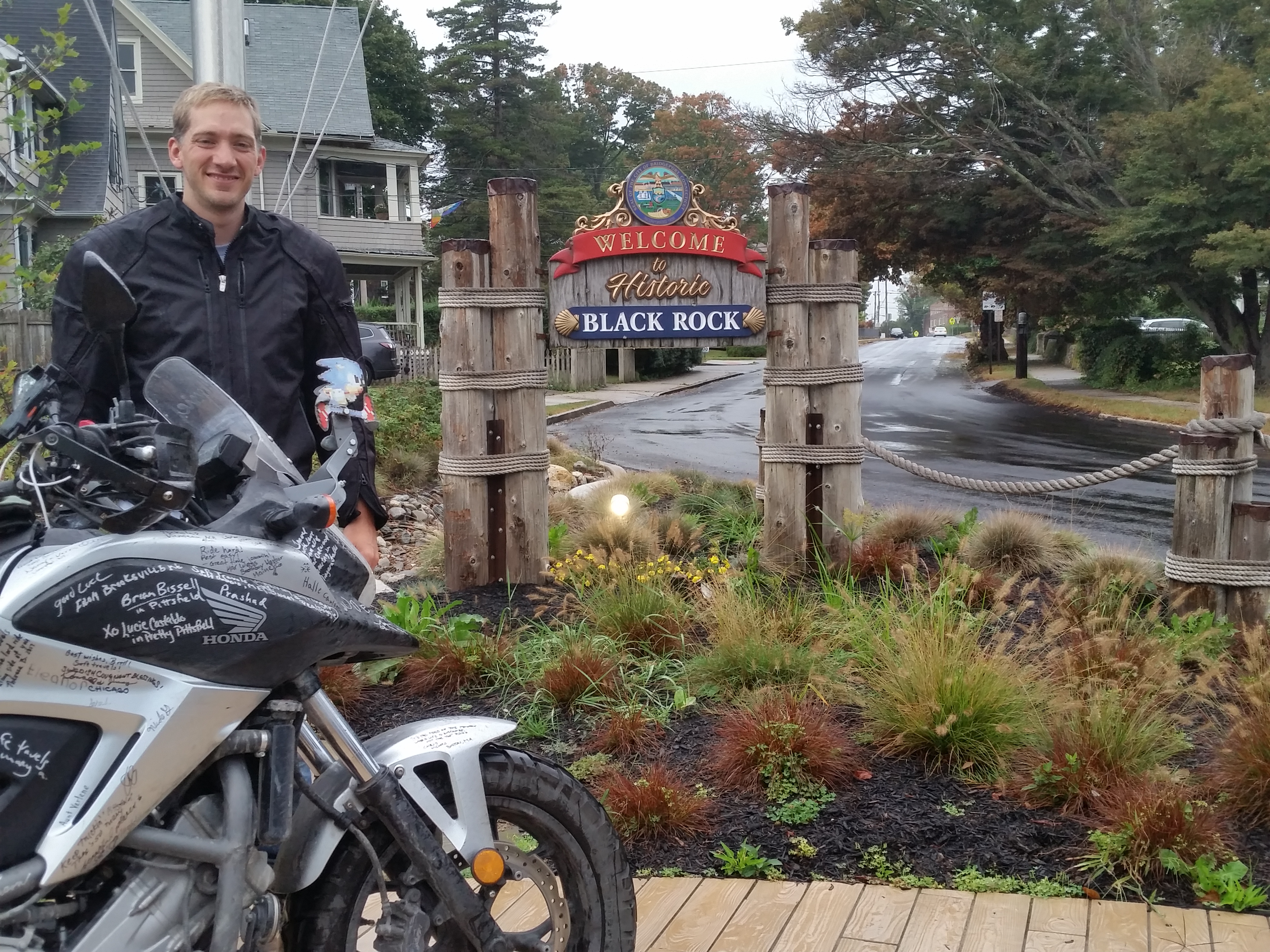 …and that’s all I have to say about that.

Time to make some new friends!

Along with this blog, I have also been chronicling my journey on a motorcycle website called ADV Rider. My narrative there is usually a little less personal, though I do some copy-pasting of some of the good stories to keep me from typing them twice. It is a wonderful community that really supports each other. I may not have had the courage to embark on this trip without reading of some of the travel tales of others on that site. Here’s my thread.

This website is where I met my friend George in Glenrock, Wyoming. Way back in this post.

A gentleman on the site named Mitch had invited me to stay with him in New York City (Brooklyn). Though NYC is not in the song, I figured I could use his place as a base of operations to go after Haverstraw, NY and Hackensack, NJ. Plus, have you ever seen me turn down a roof. 🙂

Mitch had been graciously accepting packages for me, including: A new front tire, a turn signal cover, action cam mount and air filter. Having a place to ship these things was a godsend.

…but first I had to get into the city. He talked me through the best way in to avoid toll bridges. I filled my veins with caffeine and prepared for the most congested driving of the trip so far. Getting to Brooklyn requires one to pass through the bulk of the city.

The rules of the road are a bit different in this city. In Nebraska, there is a sense of ownership when you are in a lane. While you own it, you can expect others to stay out of it. In New York, you are more akin to a squatter. A car may evict you from your spot at any time.

Additionally, the rule for flashing lights is “OK to pass.”

Driving in NYC requires more artistry. You almost have to “feel” your way around since there is no way to keep track of each vehicle and pedestrian along the roadway. Riding in the city was a good experience for me. It will be good practice for the non-American metro areas to come.

I made it to Mitch’s place without any truly harrowing experiences.

I was really eager to meet him, not just for the room and board. Two years ago, he rode a $1,500 salvaged Victory motorcycle (which was in Lincoln, NE coincidentally) all the way down to the tip of South America. 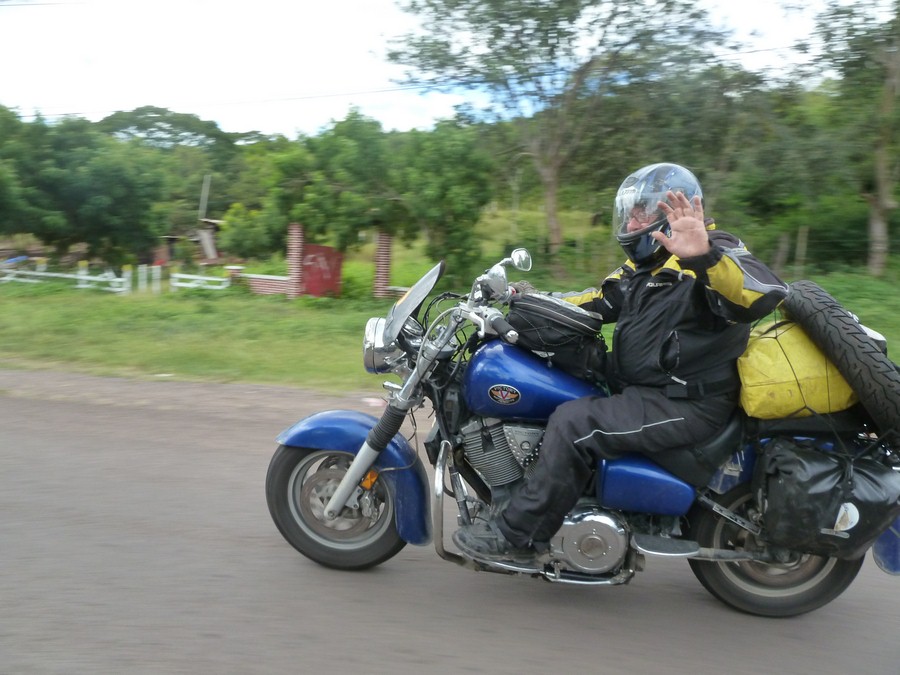 Nearly everyone who does this ride takes a bike with some off road capabilities. Going all the way on a street bike is an impressive feat. 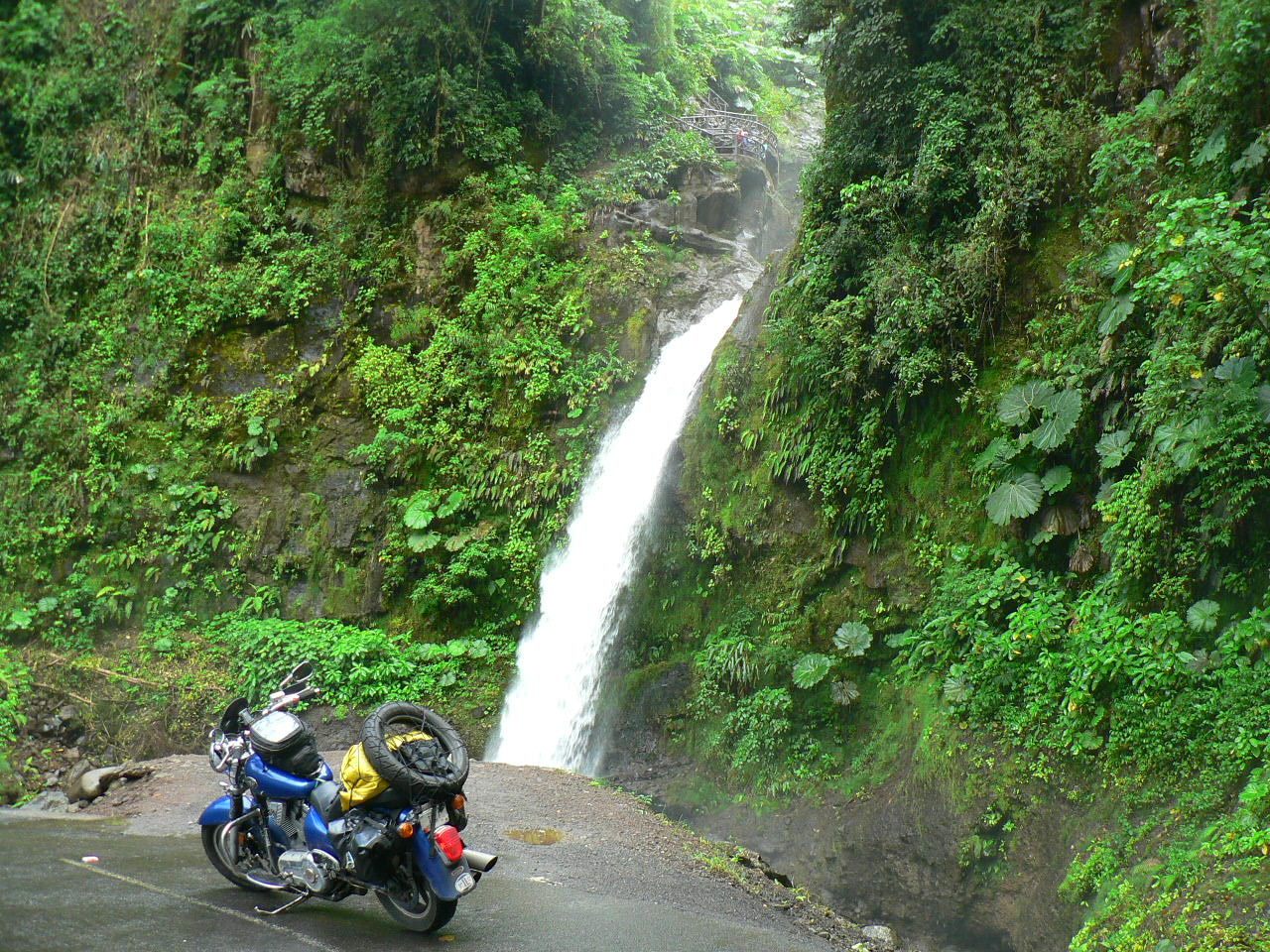 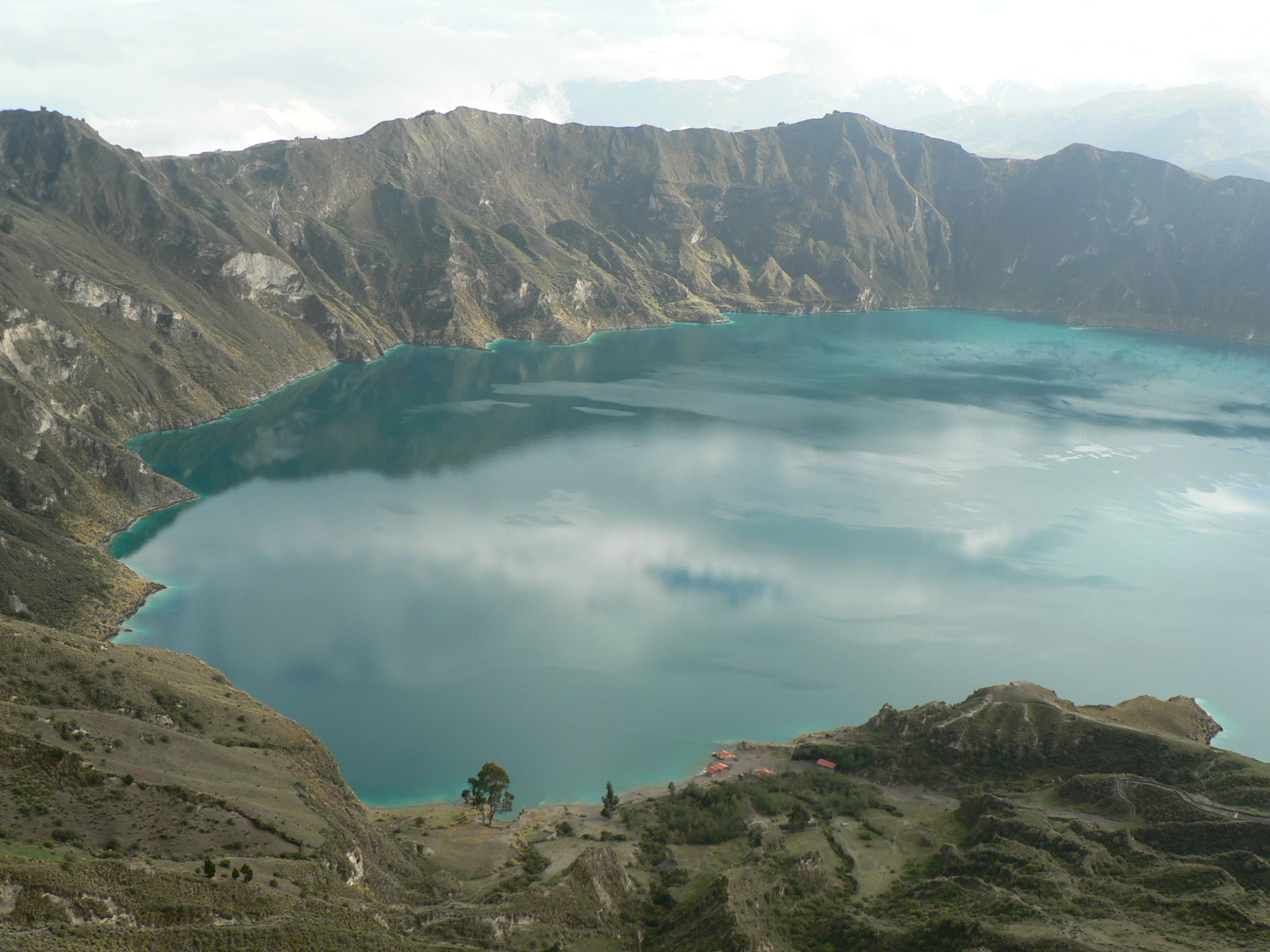 His trip wasn’t without issues: 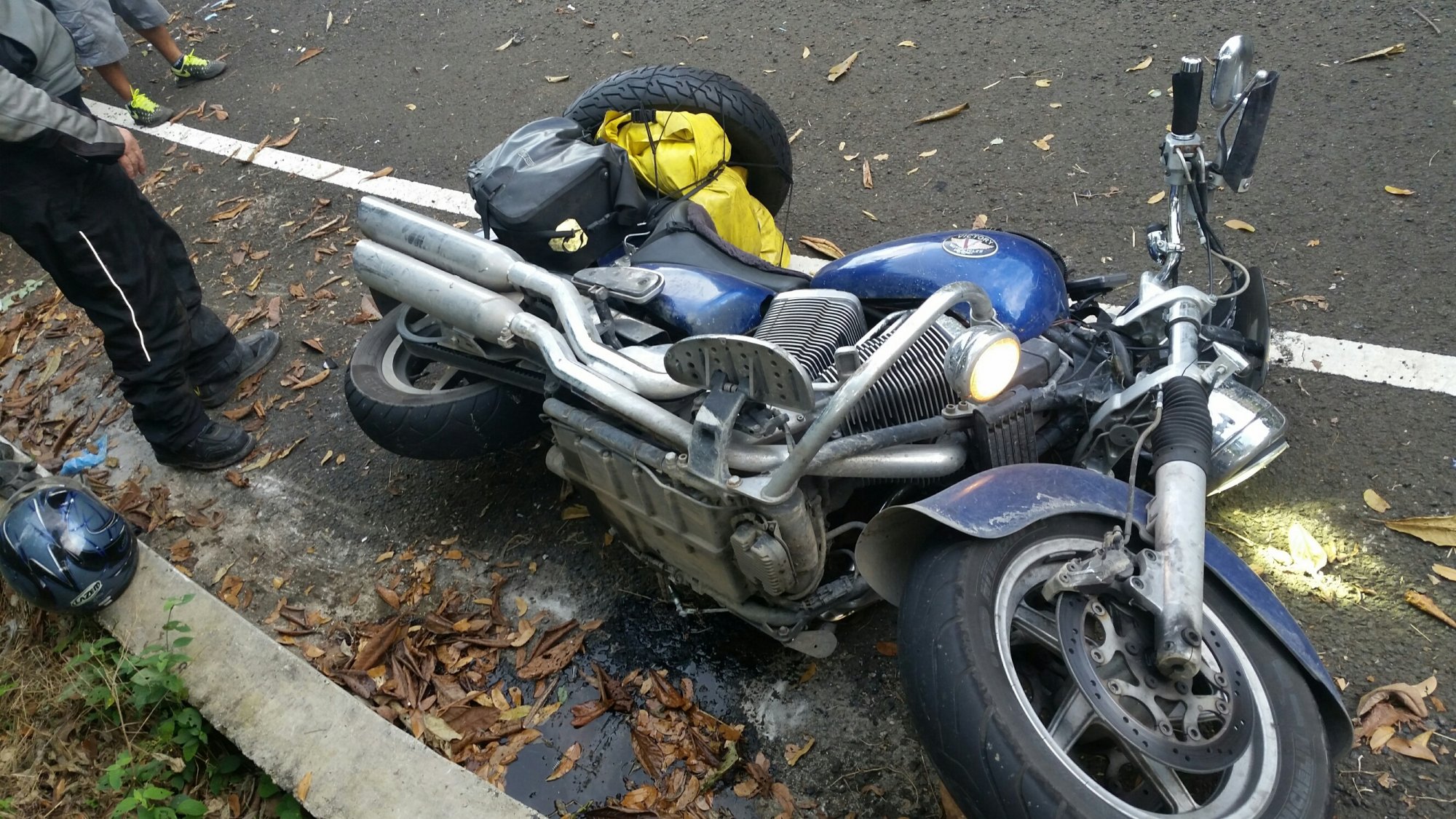 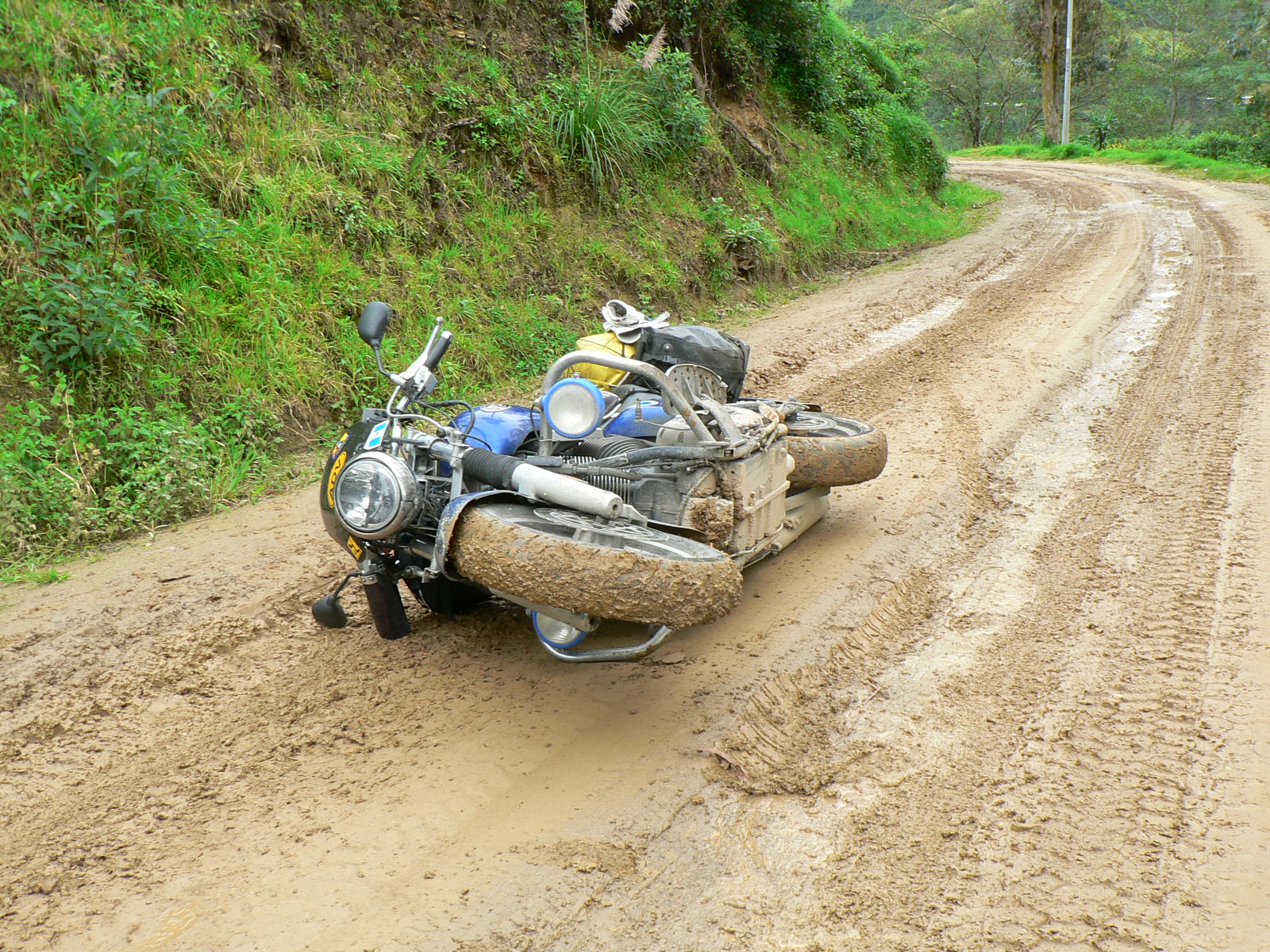 …but he pushed on and made it all the way to Ushuaia at end of the continent. I was eager to talk to him about his experience and glean whatever knowledge that he was willing to share. 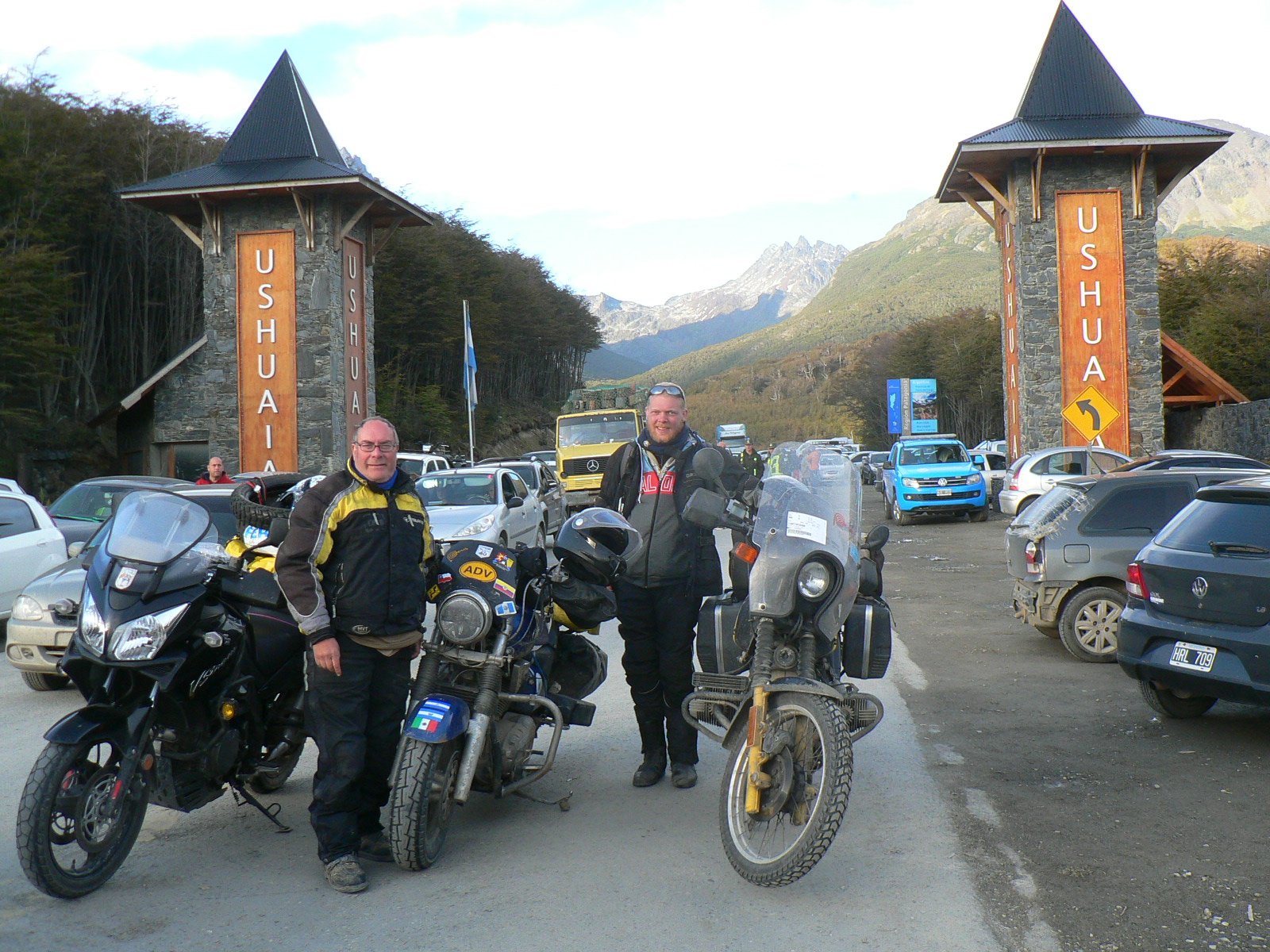 I also met his wife, Zandra, and her daughter Tiffany. These people would go on to spoil me relentlessly over the next few days. The first night was jerk chicken from a little hole in the wall on Flatbush Ave. 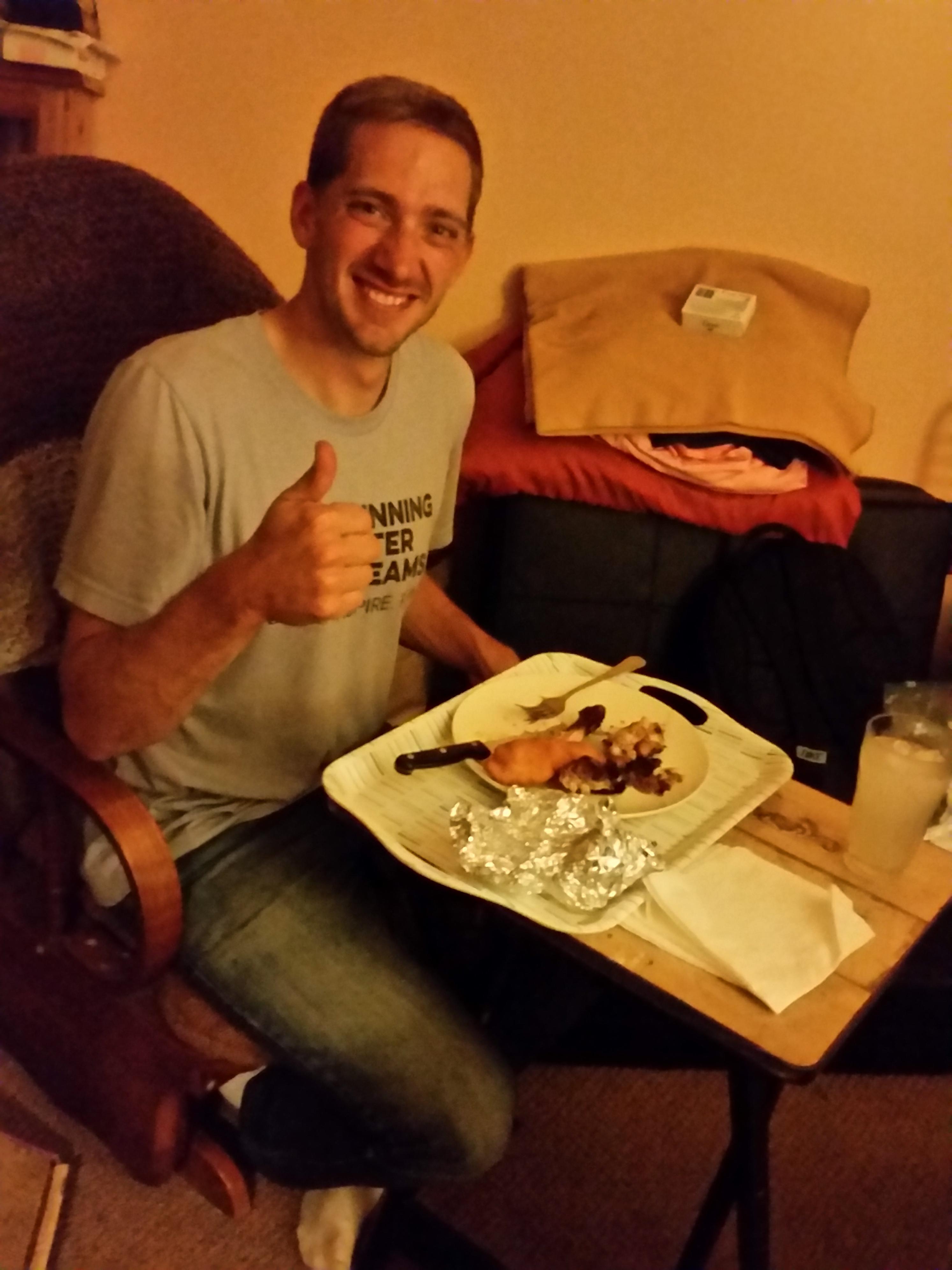 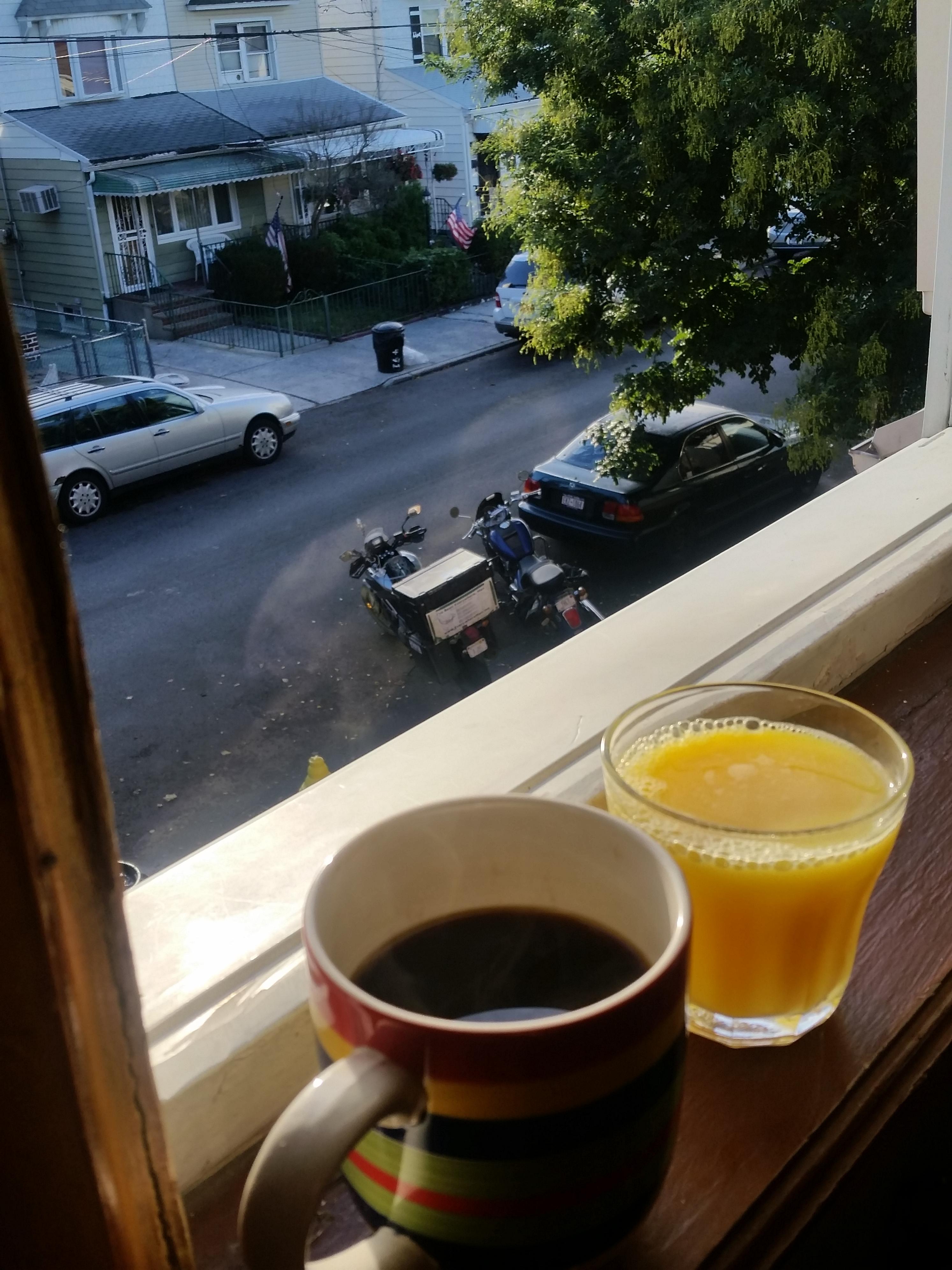 Mitch has a business in which he restores Crown Victoria’s which have been retired from taxi service. On this day I got to ride along and help him out. We took the bus to the north side of Brooklyn. The lot had quite a view.

We took out eight of them that he had won at auction, found places to park them on the surrounding streets and put plates on them. I mentioned that I wanted to see the 59th St. Bridge, immortalized in this Simon and Garfunkle tune:

This song is an absolute masterpiece. It is one of my favorite “mono-progression” (same chords through the whole thing) songs of all time. I like this live version better than the studio recording. It’s so…..groovy. 🙂 He took me for a ride over the bridge and around the area.

Remember when I hadn’t played guitar in awhile, so I decided to get up in front of some Nova Scotians and sing the hardest song I know? Well, I hadn’t driven a car in awhile and now I was going to take one all the way across Brooklyn. I always ease into things, don’t I. 🙂

It was a lot of fun to help him out.

I wanted to get my front tire changed and Mitch had just the place. It was a Haitian tire shop where he had been taking tires for years. As we waited inside, he got a call from a potential customer who was waiting to check out one of his cars. I told him he could go, but he chose to stay with me. “I want to make sure they do a good job.” 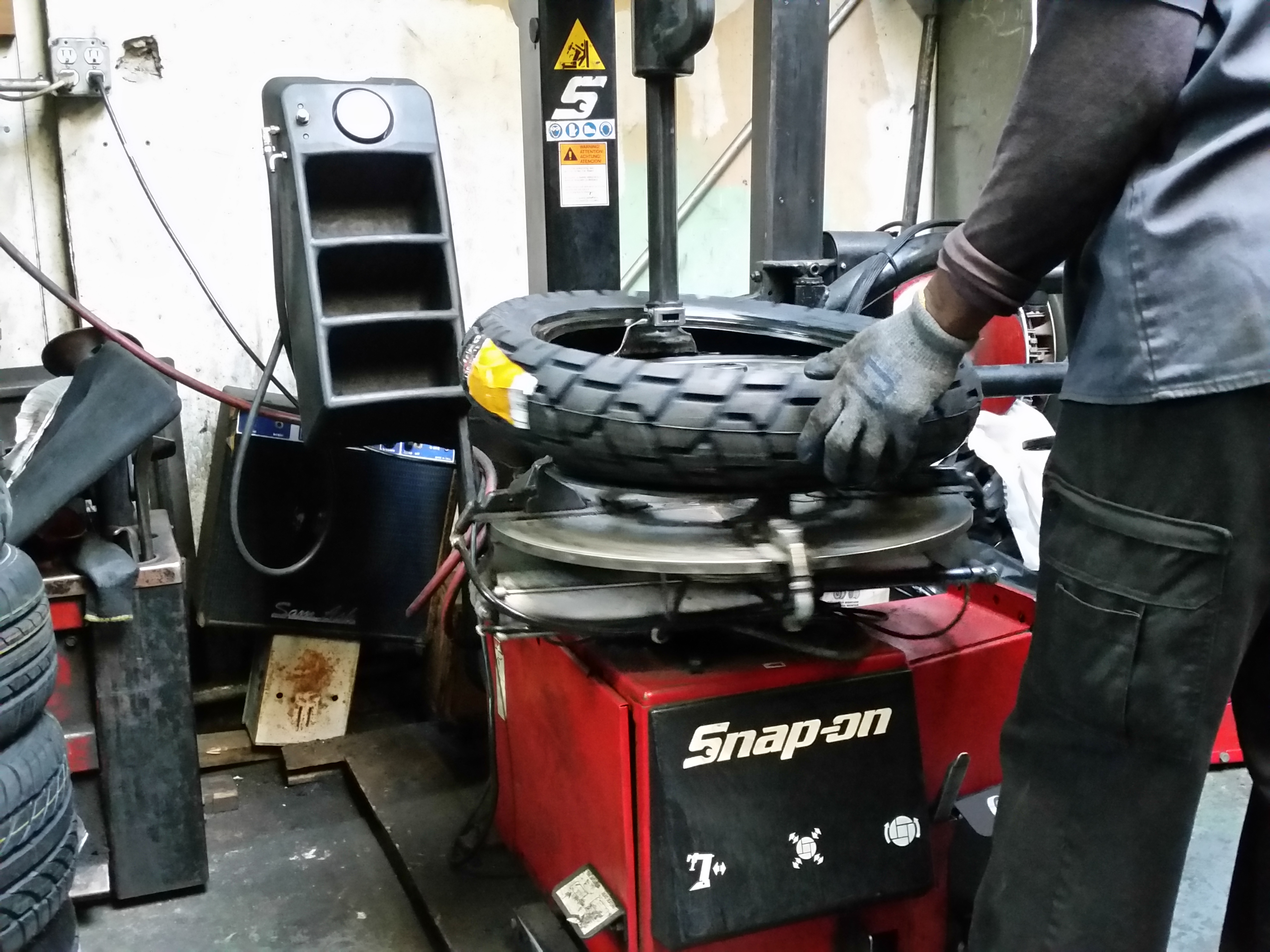 My tire still had a decent amount of tread remaining, but it had begun to wear a little irregularly. For $65 for a new one, there is no reason to push it. I’m not sure if it is visible in this picture. 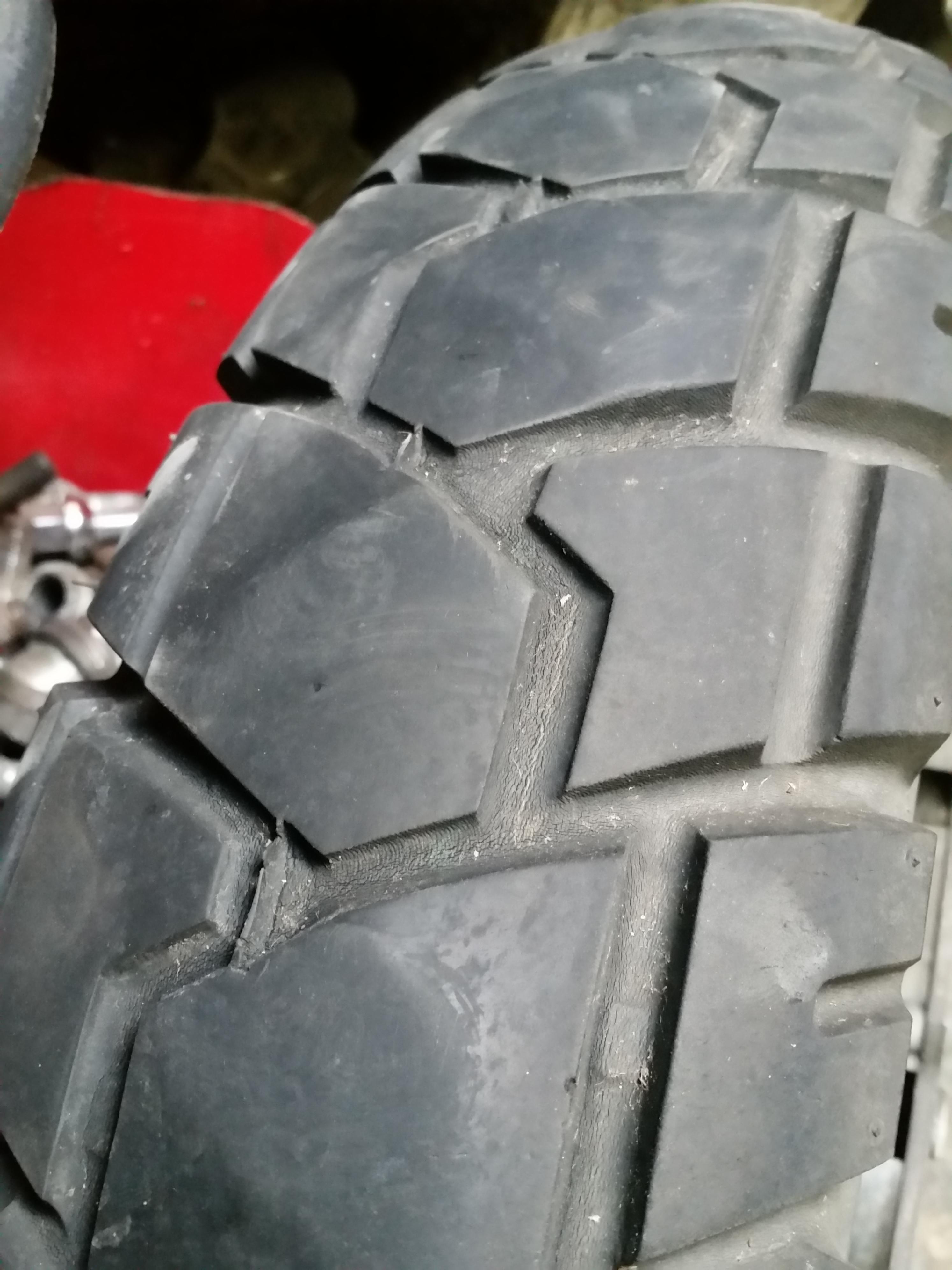 That tire has been with me for 31,000 miles. Quite a servant. Enjoy your retirement! (no pun intended)

I’m going to wrap it up there. I still have lots to tell about my time in the NYC area. I go to a bike meet up, tour Haverstraw and Hackensack, eat some more good food and find a fuzzy mess in Annie’s innards.

…and that’s NOT all I have to say about that. 🙂

Realtime update: I finished up Baltimore this morning and am getting into Washington DC this evening. I may stay until Monday, since I want to talk to the Brazilian consulate about a visa. I’m doing well. How are you?