Things tend to run together in this part of the country. 🙂 Our progress continues with places 35 and 36, Baltimore and Washington.

Perhaps the most regular, uninspiring day of the whole trip. It was great!

I left my gracious Brooklyn hosts, crossed through Manhattan and began heading south. The song places come thick and fast in this part of the country, so I would not have far to travel. Baltimore was up next.

Though I covered less than 200 miles on the day, I would pass through five different states: NY, NY, PA, DE, MD. This area is so thick with population that I know I missed so many things. I debated going into Philadelphia, but just passed through.

I needed to do a couple hours of work, so I settled down at a travel stop in Delaware. I would only be riding in the state for a short time, so it seemed like an appropriate place to linger for awhile.

As I neared Baltimore, I began to search for a place to set up a tent. My search took less than 10 minutes before I found a perfect, forested spot. I’m not sure why the land isn’t used, but it was perfect for me.

I scouted a route through the forest on foot, moving some of the larger fallen branches out of the way. I eventually got myself hidden deeply (with only a small branch to the face).

Some deer were chasing around near me as I set up.

It has been 15 years since my last visit to this historic harbor city. I had only done some marginal planning of what to see, but knew I could find plenty of things to keep me busy.

In the morning, my headlamp was out of batteries. I realized just how much I rely on that item. In its stead, I turned on my phone LED and tucked that into my headlamp strap. I looked awesome. 🙂

Once I got into the city, I noticed that Annie had acquired a tail from this backwoods spot. It had held on at 70mph! 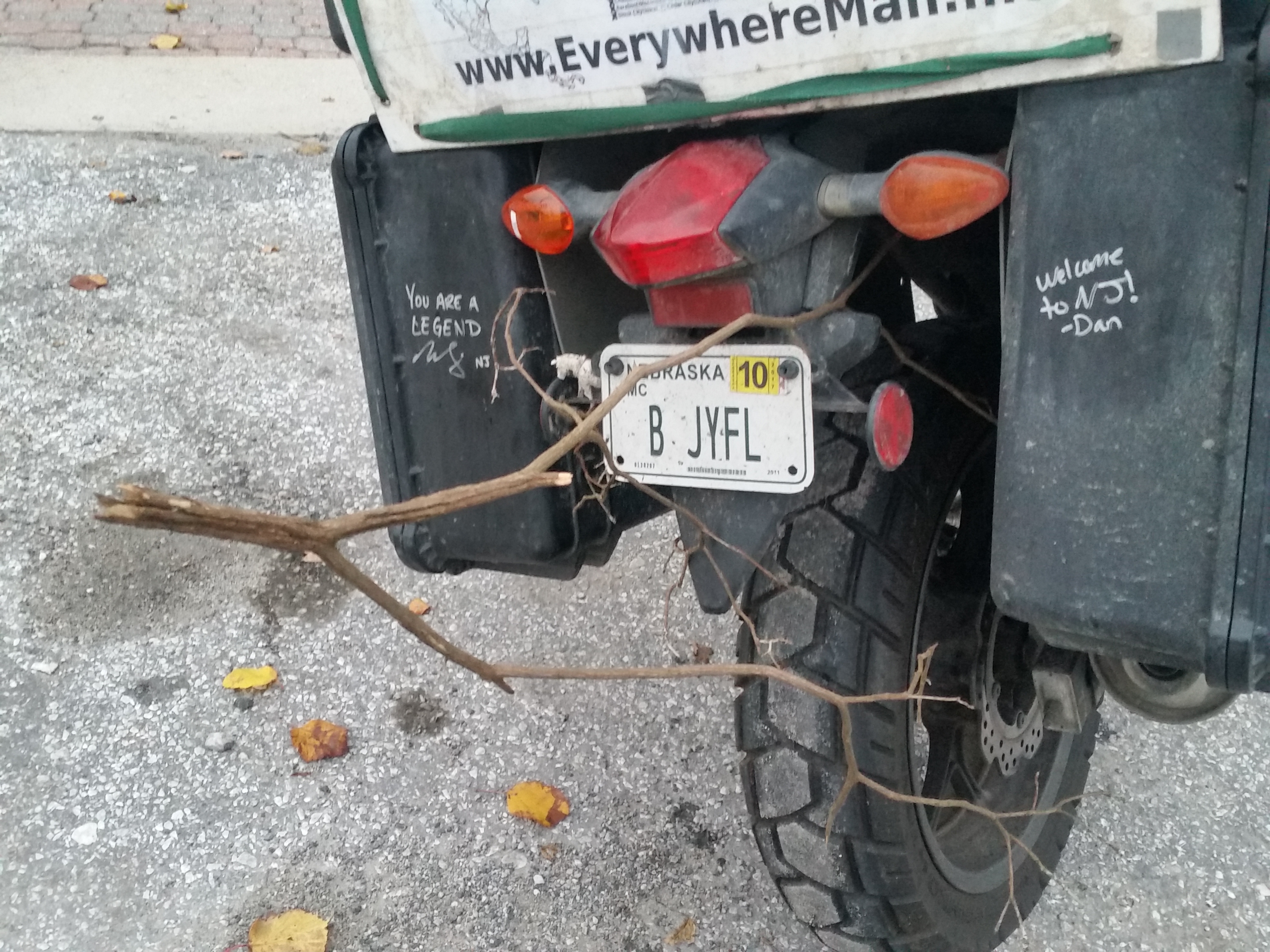 One of the most significant historical events in Baltimore is what transpired at Fort McHenry during the war of 1812. Francis Scott Key was inspired to write the poem that would become the Star Spangled Banner. I love our National Anthem. It is epic, difficult and memorable. I began my day by singing it at one of the piers near Fort McHenry, which didn’t open until 9am.

(I’m not going to post the video. It was a decent performance, but not quite up to my standards.)

I was hoping for some good sunrise views, but it was another cloudy morning. 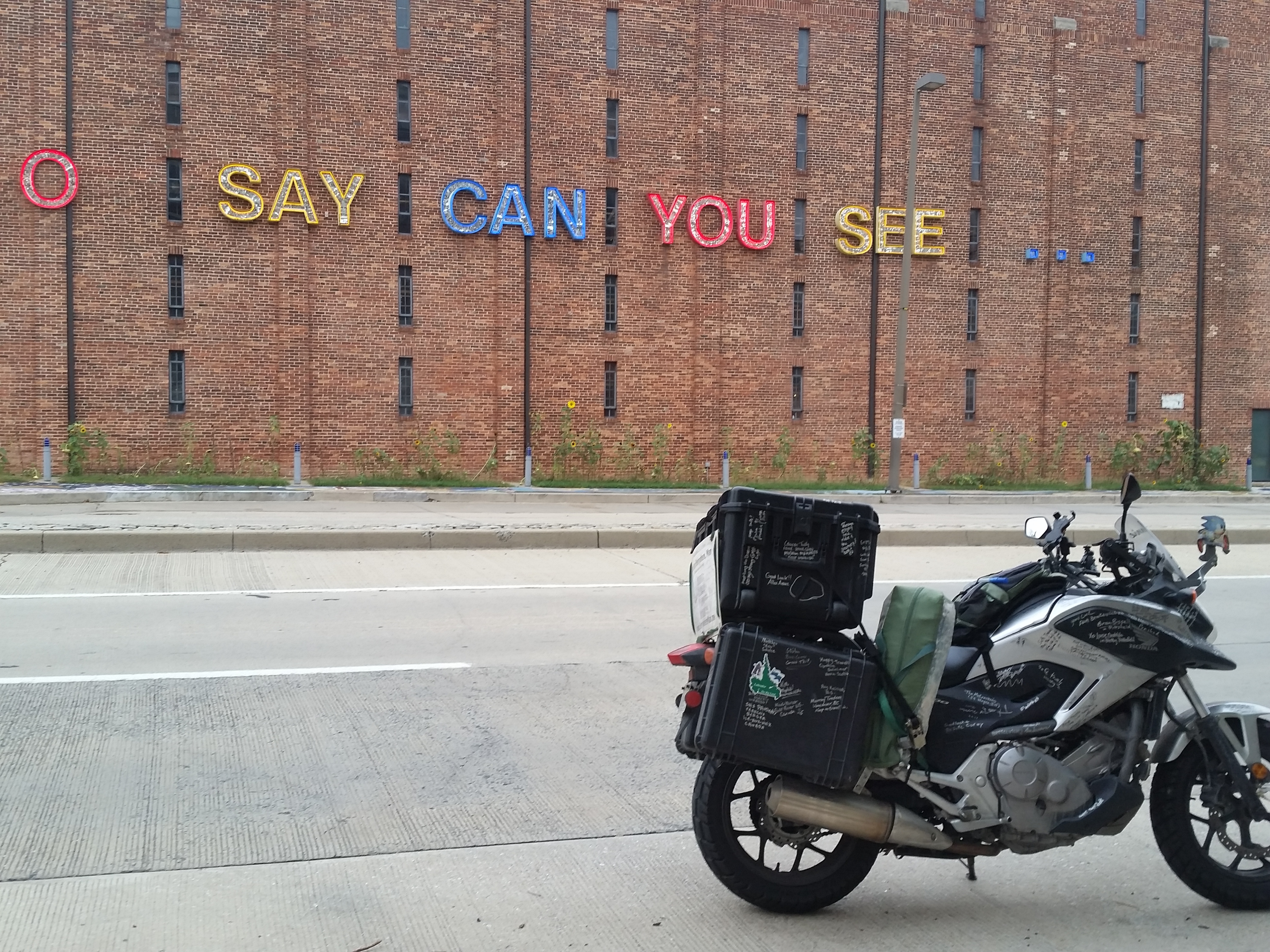 At the same pier, there was a memorial commemorating all of the immigrants that came through Baltimore.

I am 1/4 Czech and those ancestors arrived in America at Baltimore. There’s a good chance that their first steps in their new country happened here. 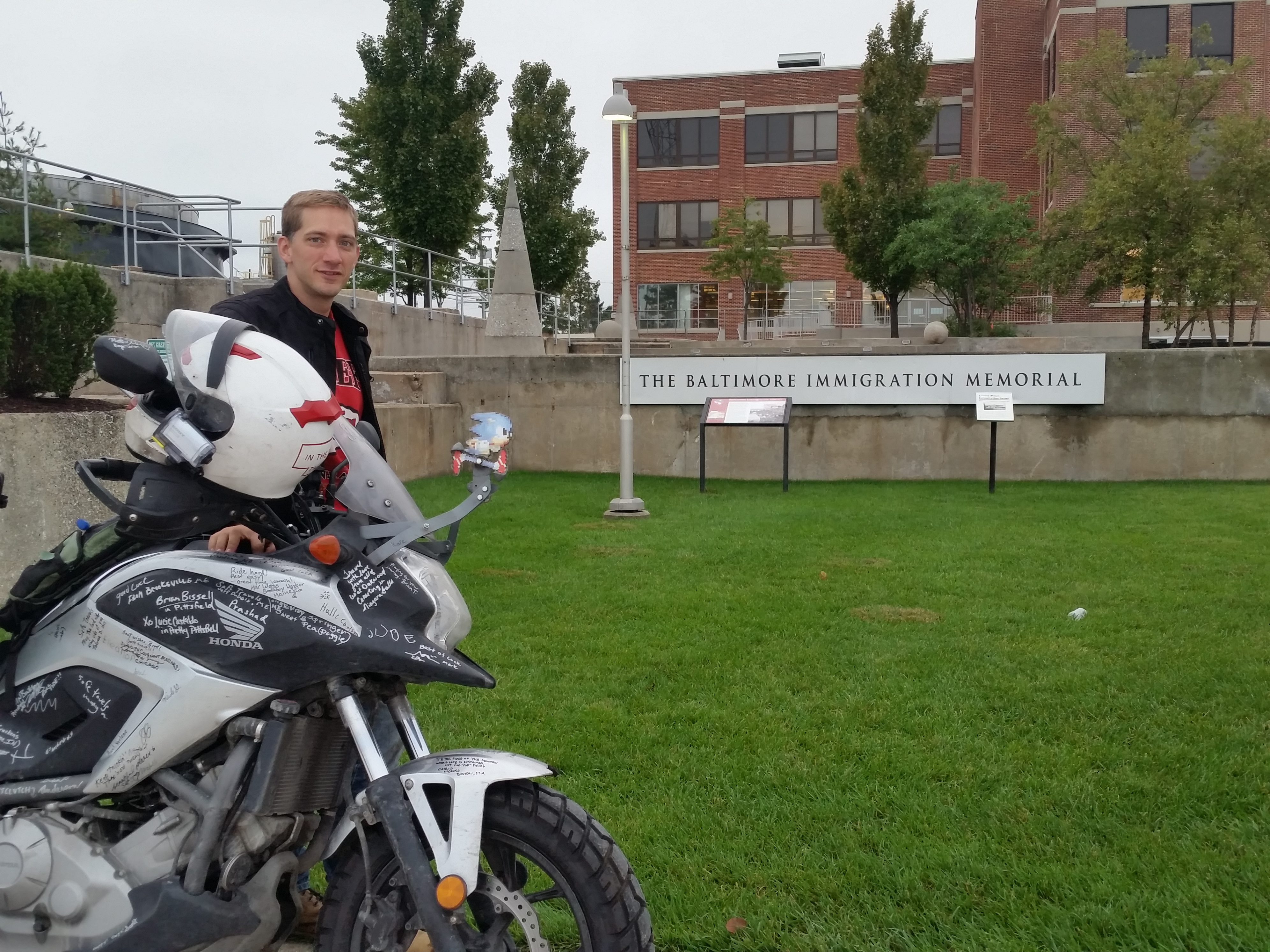 My ancestors were scheduled to take a steam ship from Hamburg, but that ship was overbooked. They had to make the voyage on a traditional sailing vessel. This was a fortuitous change of plans, as the steam ship actually sunk in Baltimore harbor.

I took some time wandering around the inner harbor. It is a great place. You can almost hear the echo of all of the goods, people and ships that have passed through this port. 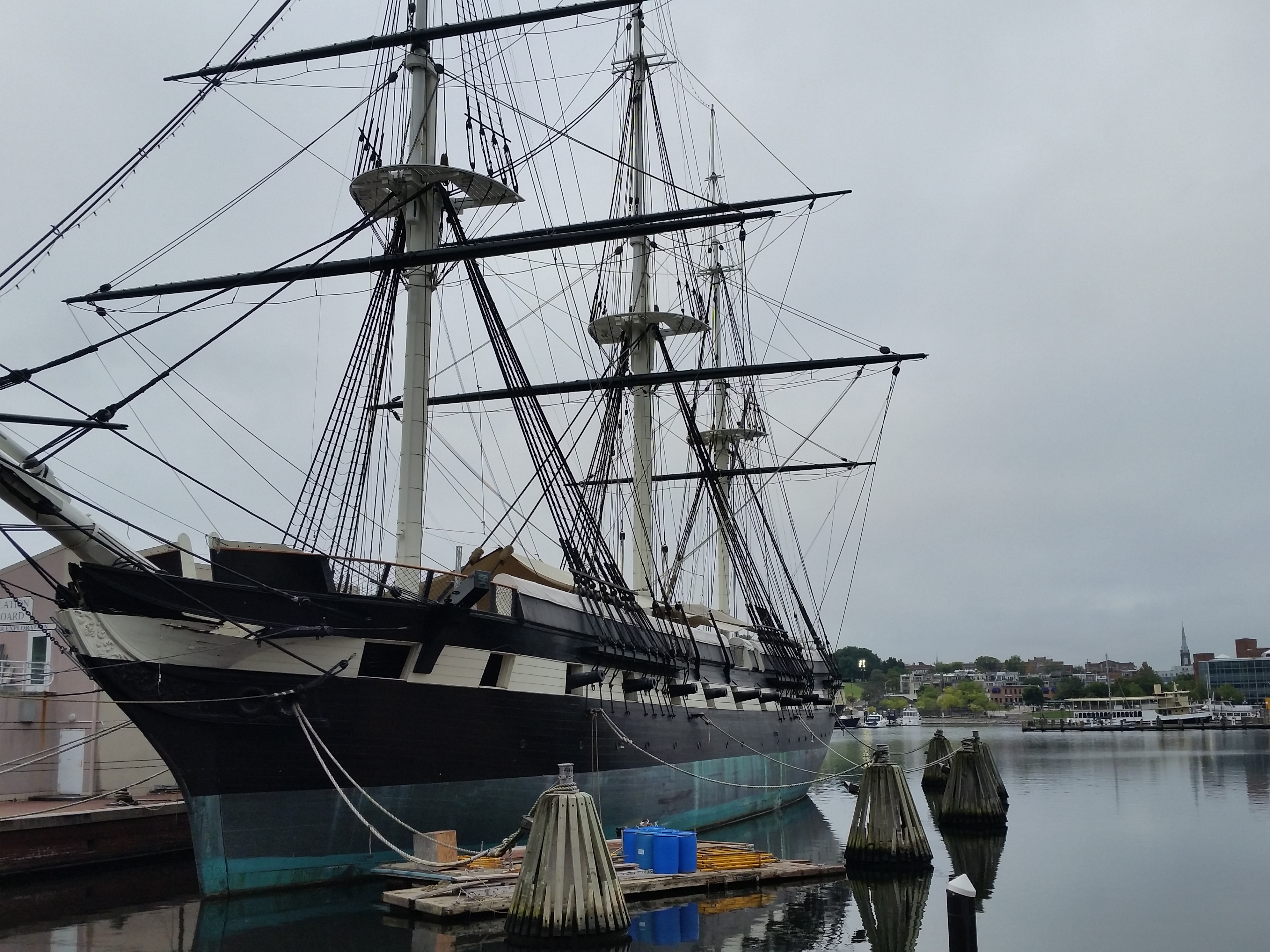 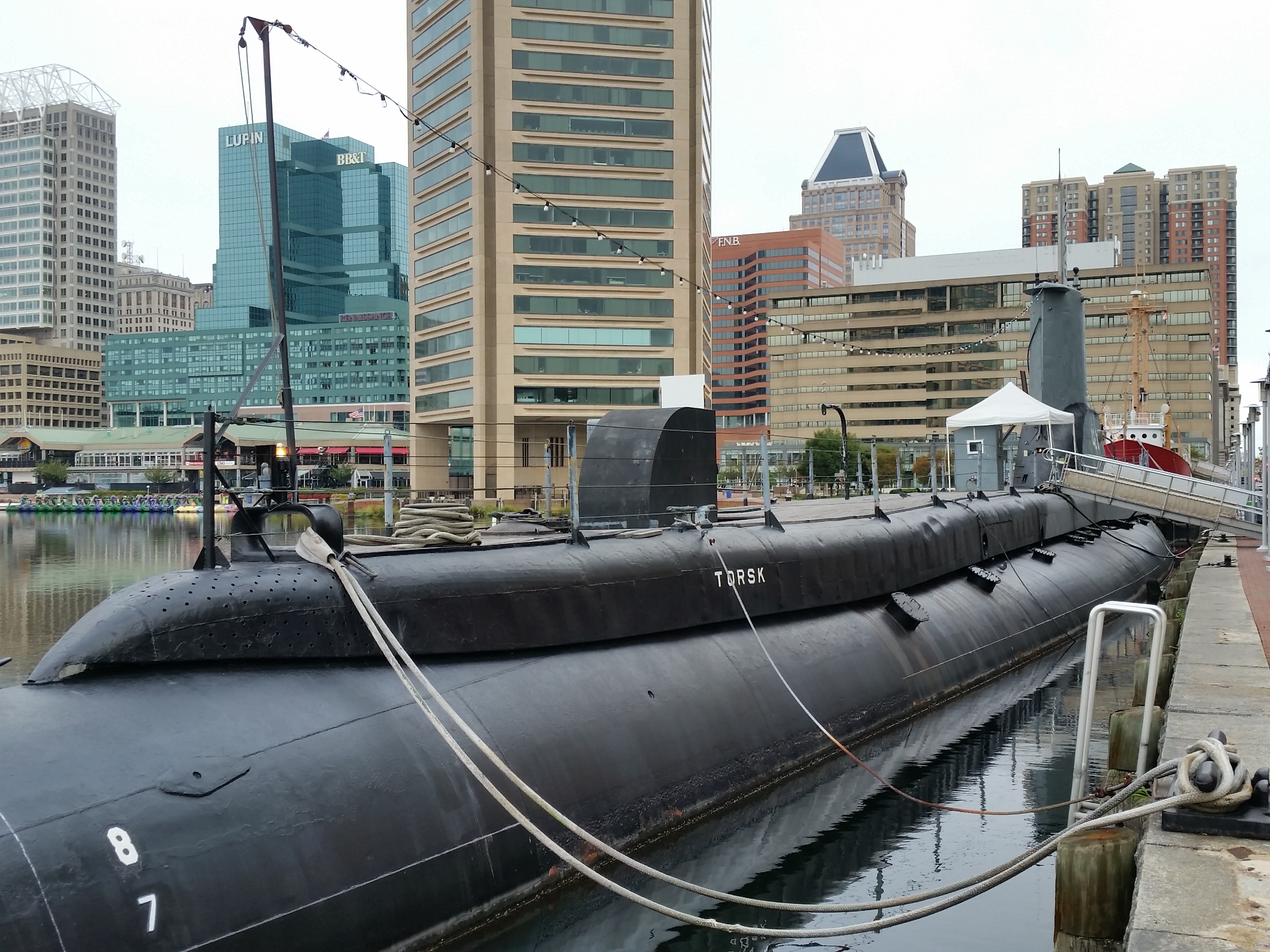 There is a powerful holocaust memorial just up the road: 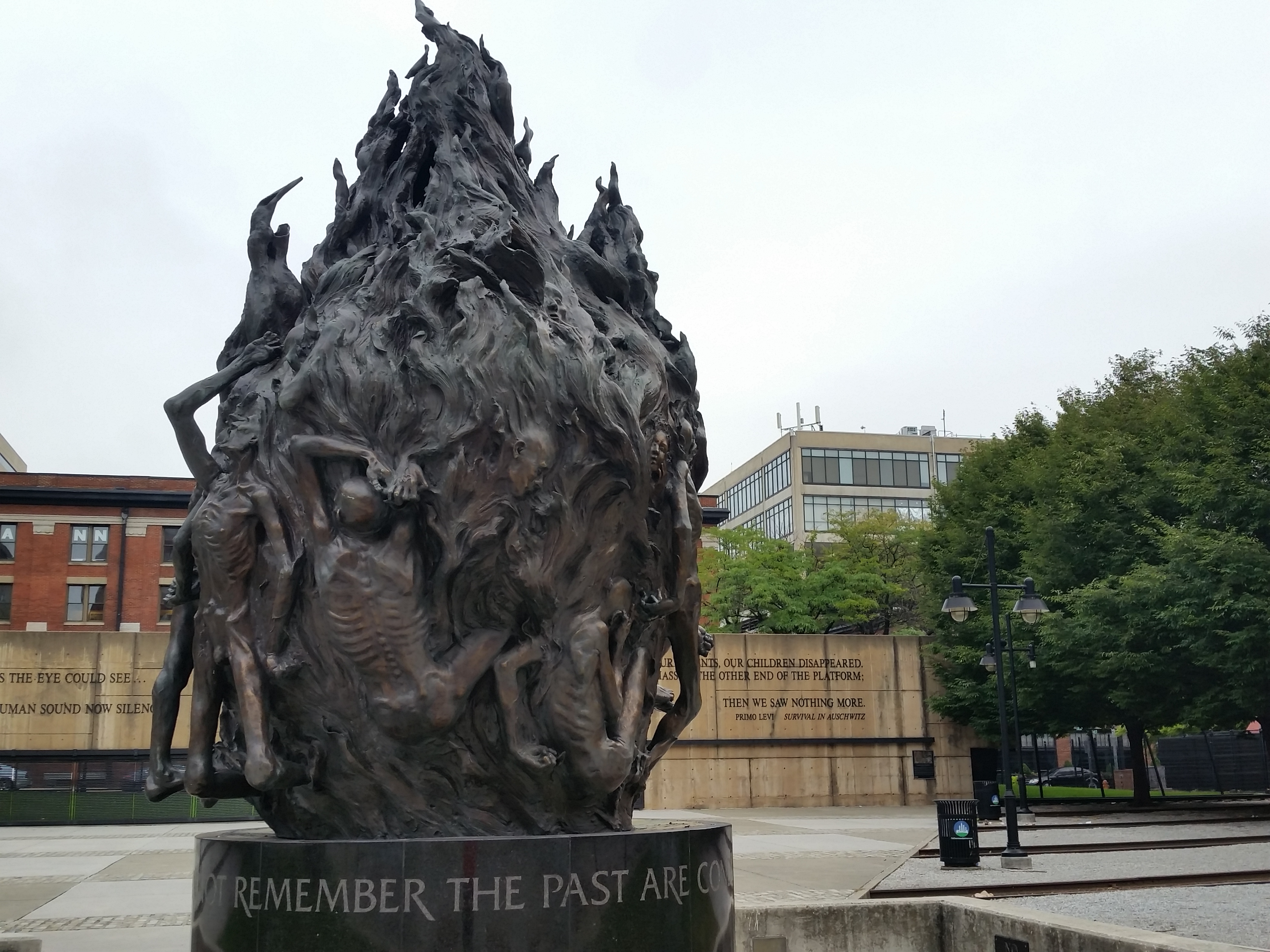 I returned to Fort McHenry right when it opened. 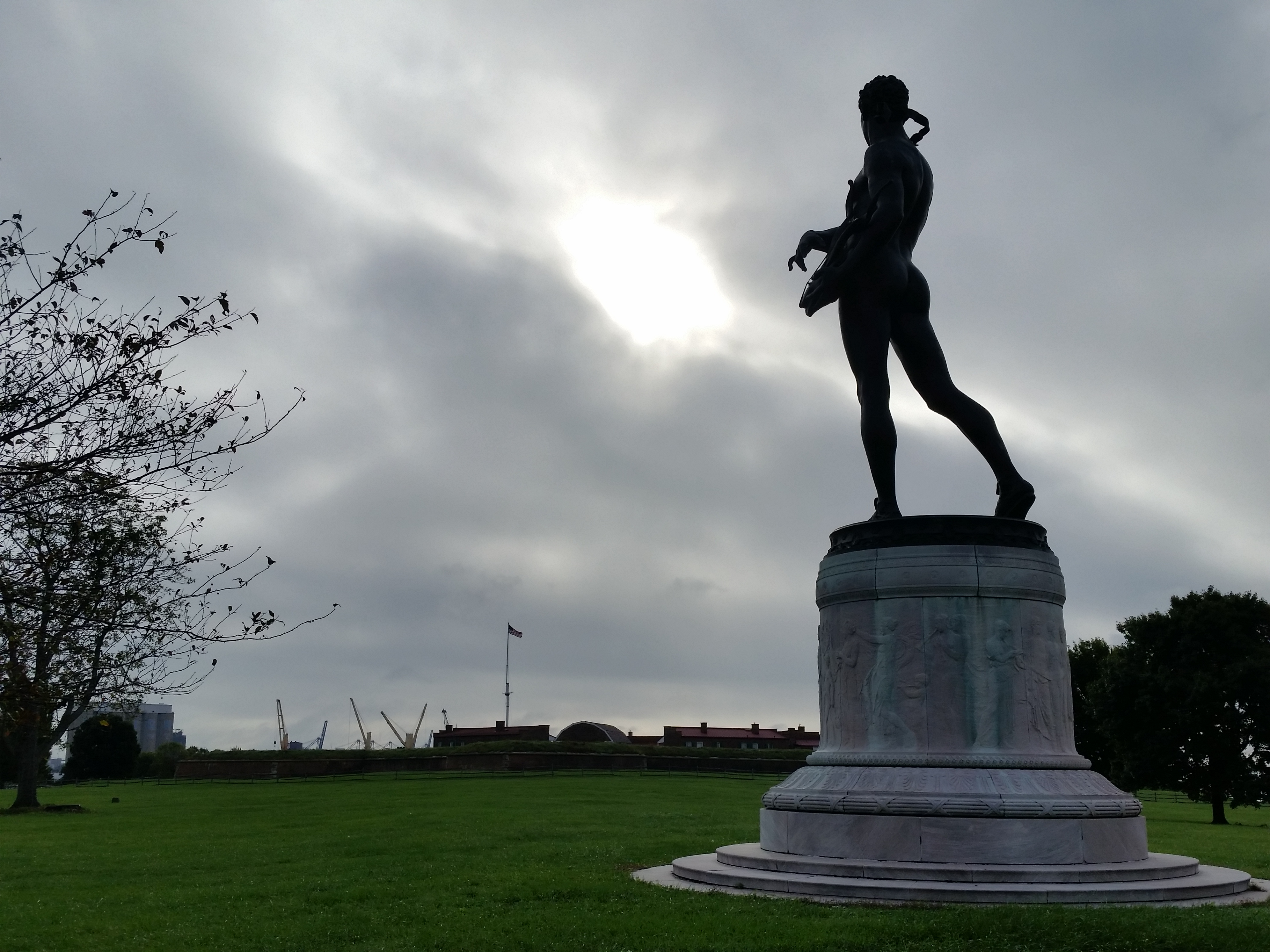 I got my star spangled picture: 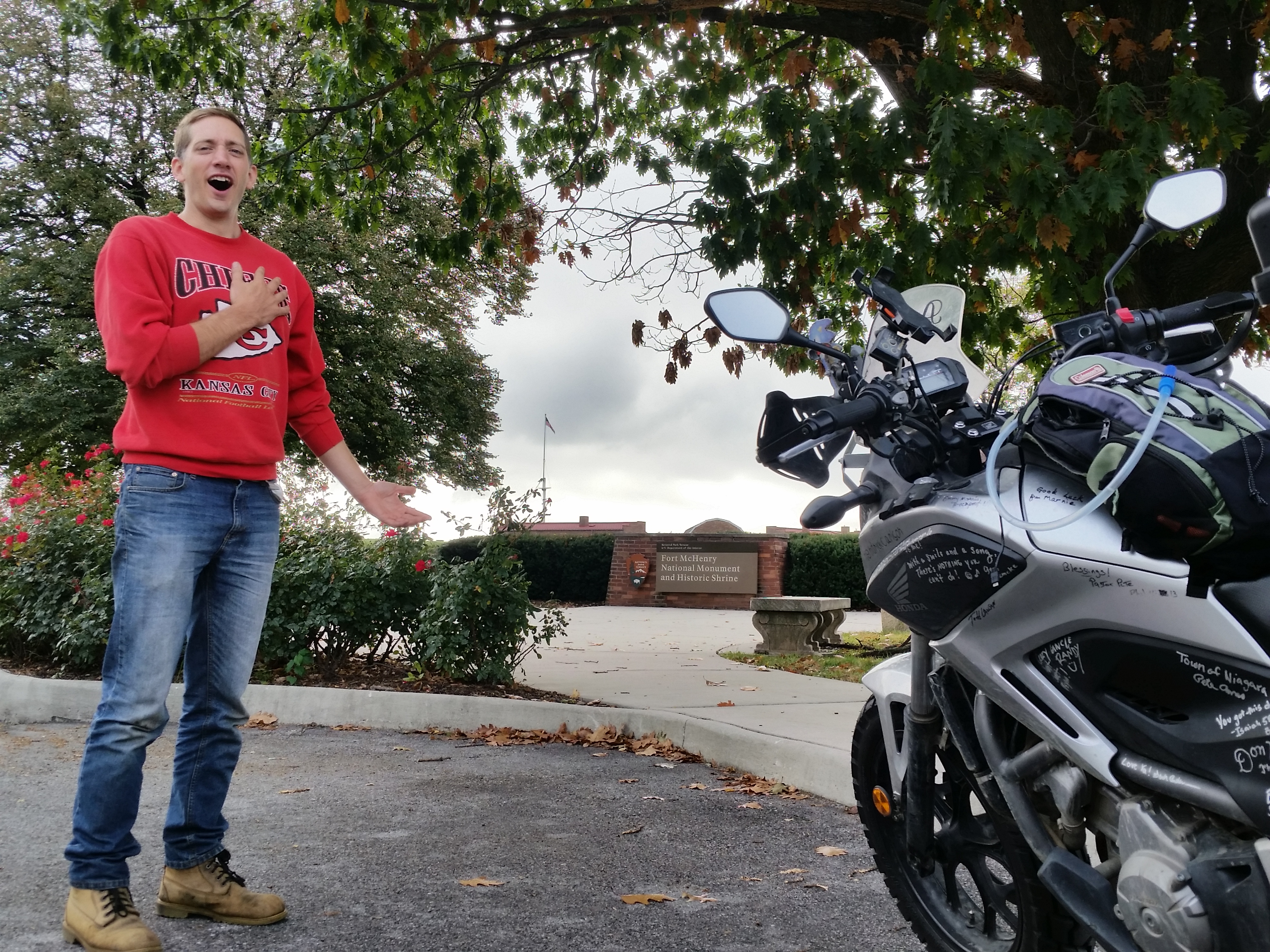 Another fun point of interest is the Shot Tower. This building was erected in 1828 and was the tallest structure in the United States at the time. 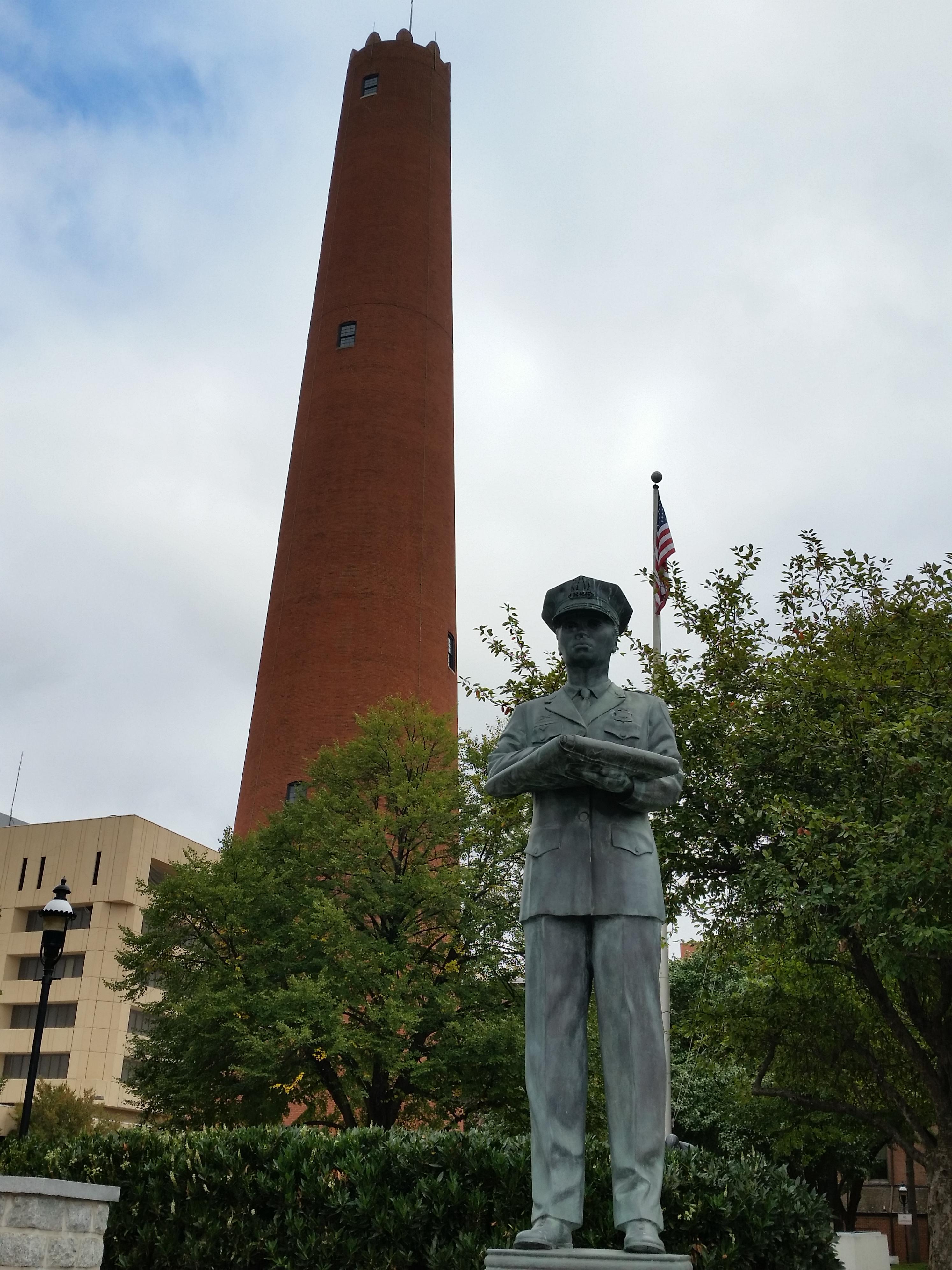 Lead was dropped from the top into a vat of water at the bottom to produce the round pieces of shot used in ammunition.

I decided to leave Baltimore with plenty of day remaining. Like so many places, it is so hard to see everything I would like. As I can always say…Next trip!

I had some good library time before making my way towards Washington DC, the next place on my list. Of course, I didn’t need to go there. I had already been to Washington state and took a picture that I really like, way back in this post: 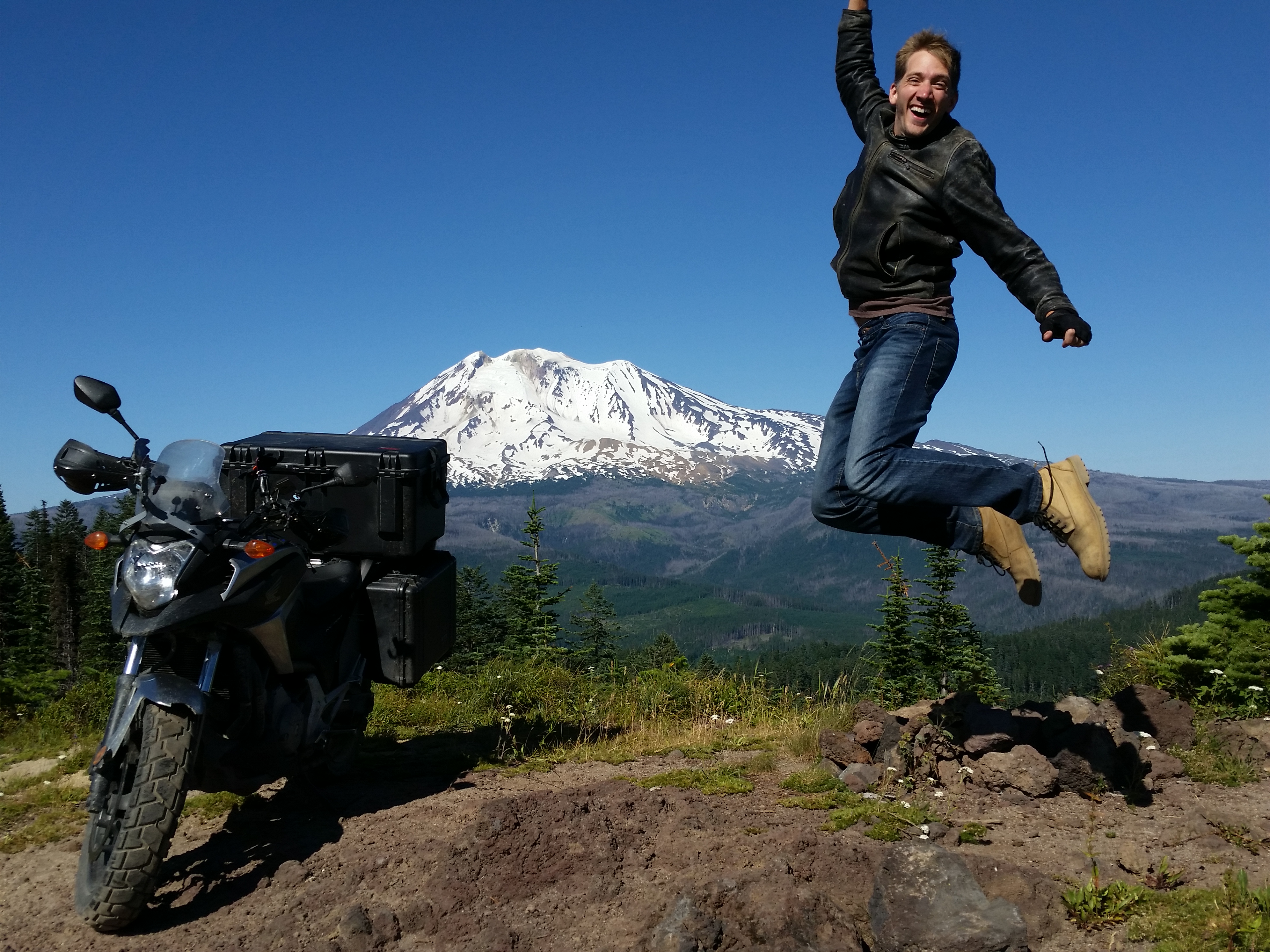 But I was eager to see the sights of our nation’s capitol again.

For the second night in a row I found a great campsite, in some woods just outside of the beltway. 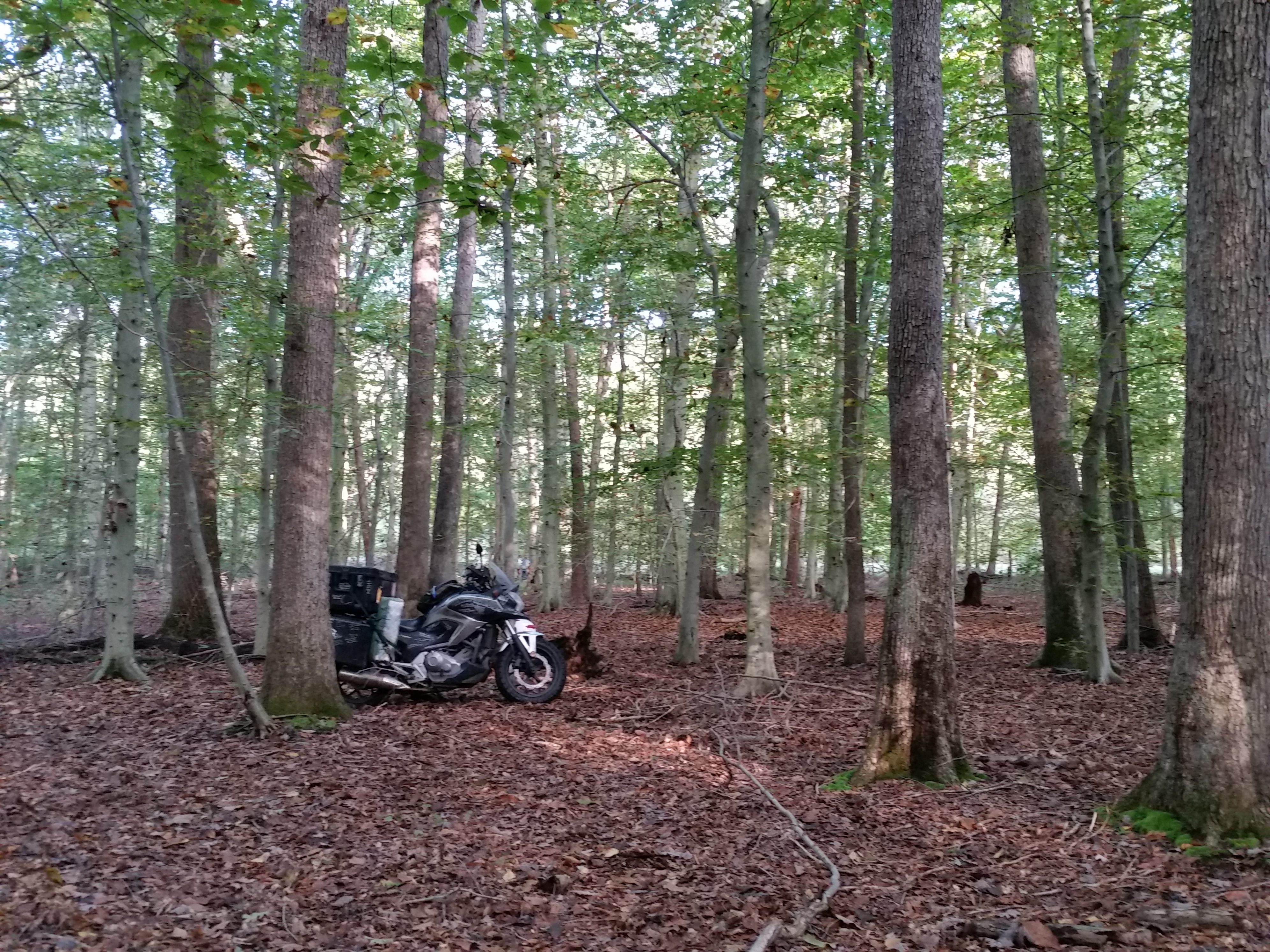 For the first time in a couple of days, I glimpsed sunshine. Sort of a peek-a-boo sunset: 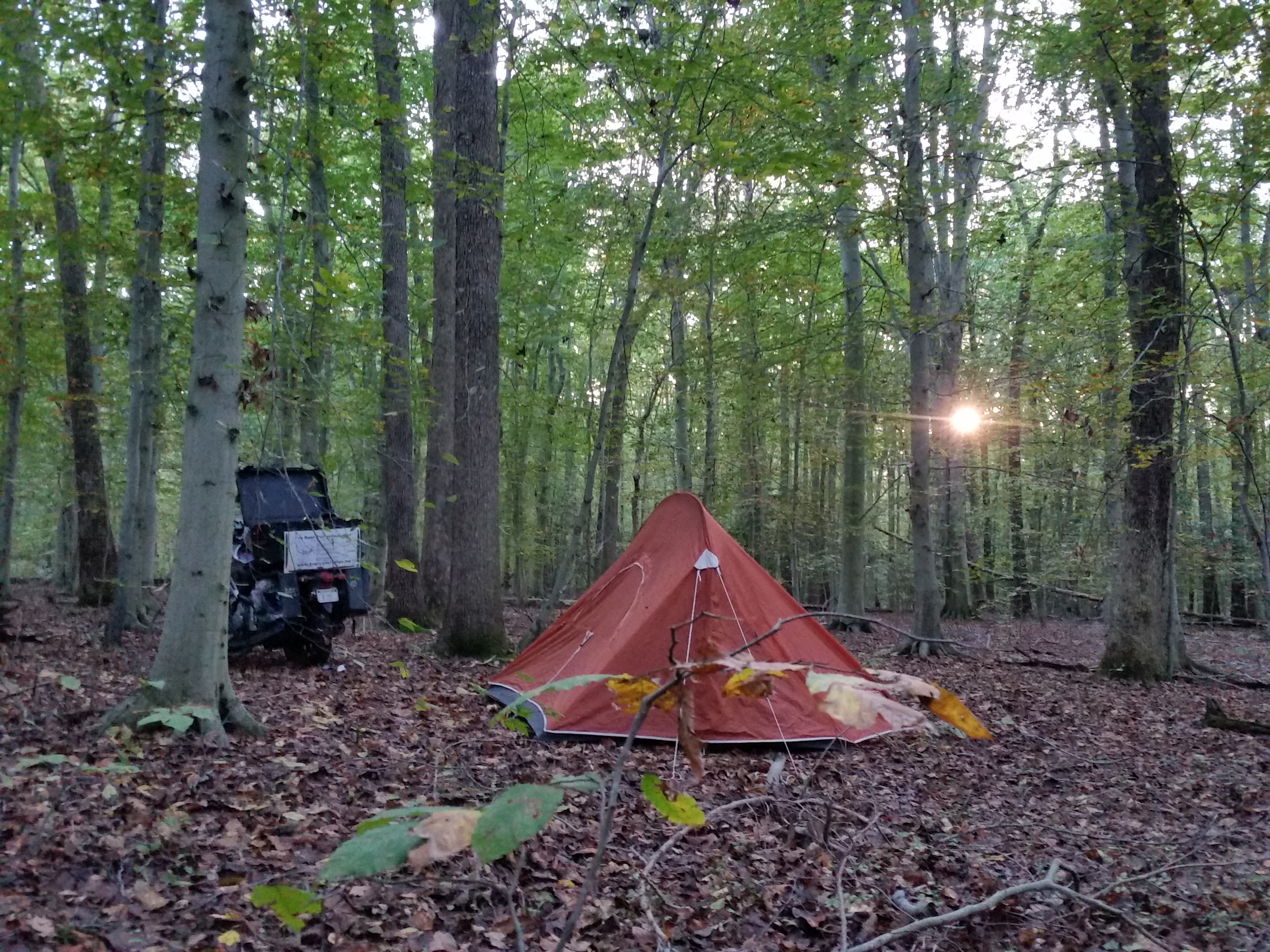 (If my sister is reading, do not camp here. I found five different varieties of spiders either in my tent or on my person.)

I was up and on the road before sunrise. As I prepared to exit the place where I was camped I came upon a gate. It appeared I was locked in. Thankfully, it was motion activated and I didn’t have to build a sweet ramp to launch over it.

I got into DC early and knew the exact picture I wanted. I thought I may have to either be sneaky or persuasive with a security person. Thankfully, neither was needed. I just had to wait for some fog to dissipate. 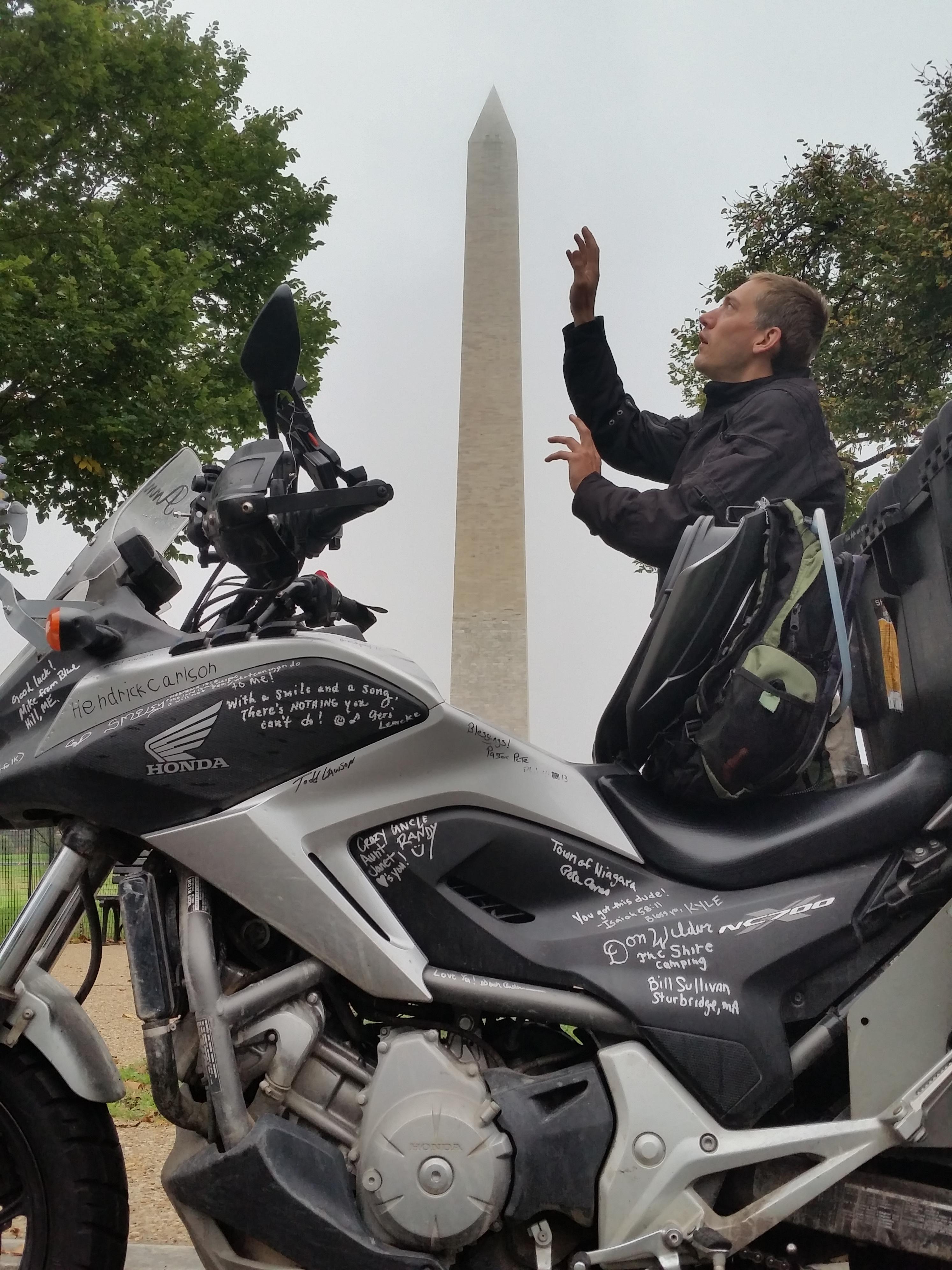 I’ll photoshop it later if I have time. 🙂

I plugged the meter for 3 hours and walked the full extent of the national mall. The WWII Memorial was new to me. (pic at top too) 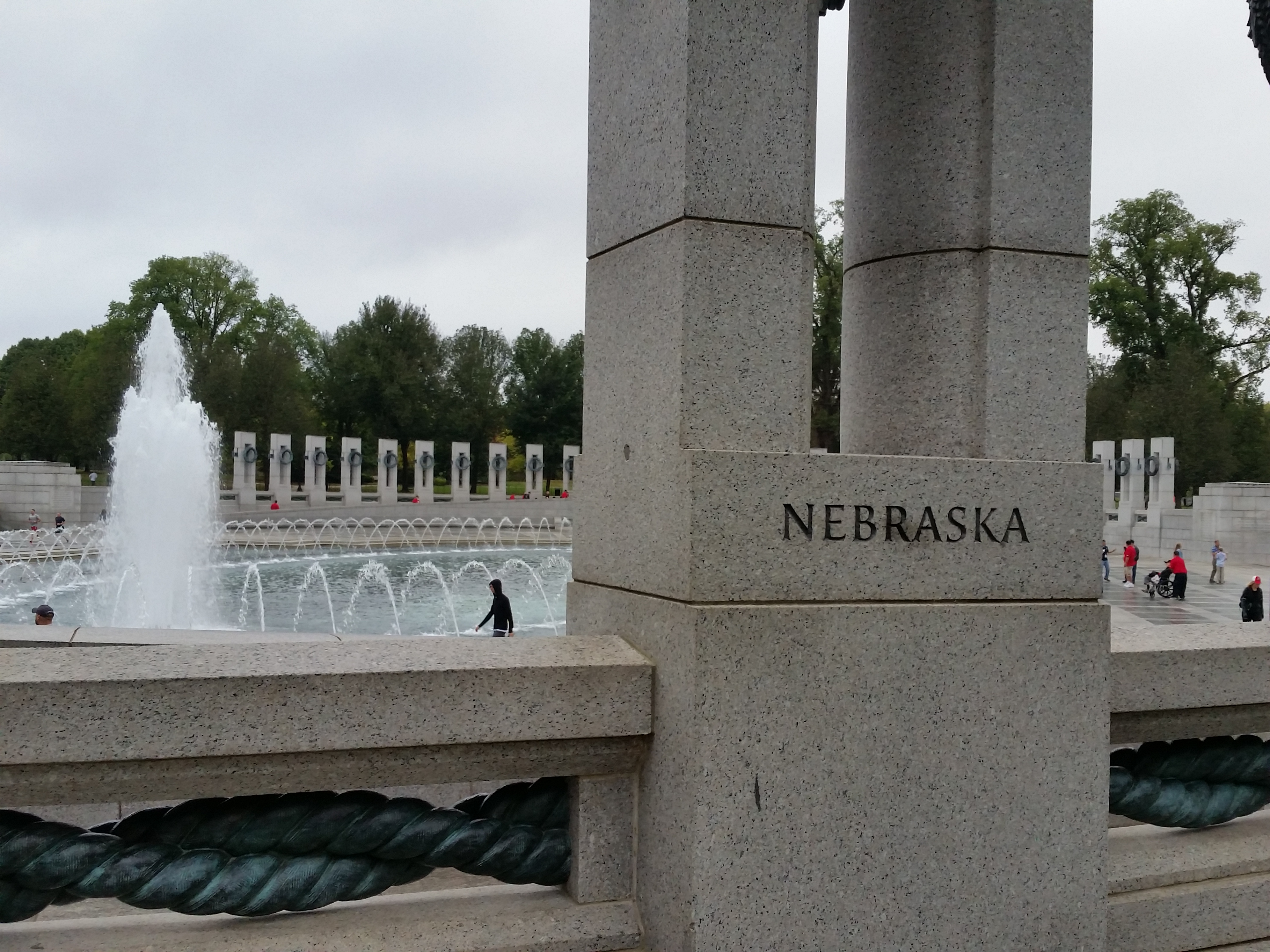 One of things I was most eager to see was the new (2011) Martin Luther King Jr. Memorial. I maybe have slightly more connection to MLK than the average Swedish Nebraskan. While my dad was in college, he spent a summer in Chicago helping those in the inner city who lived in squalid, unsanitary apartments. The landlords had neglected these properties and there was not much recourse for the tenants in those days.

My Dad heard MLK speak in the summer of 1966 and decided to march for his cause shortly thereafter. It was an experience he still recalls and often gives presentations at schools on MLK day. Here is a good article from our hometown newspaper, The Norfolk Daily News.

The monument is exquisite and powerful. 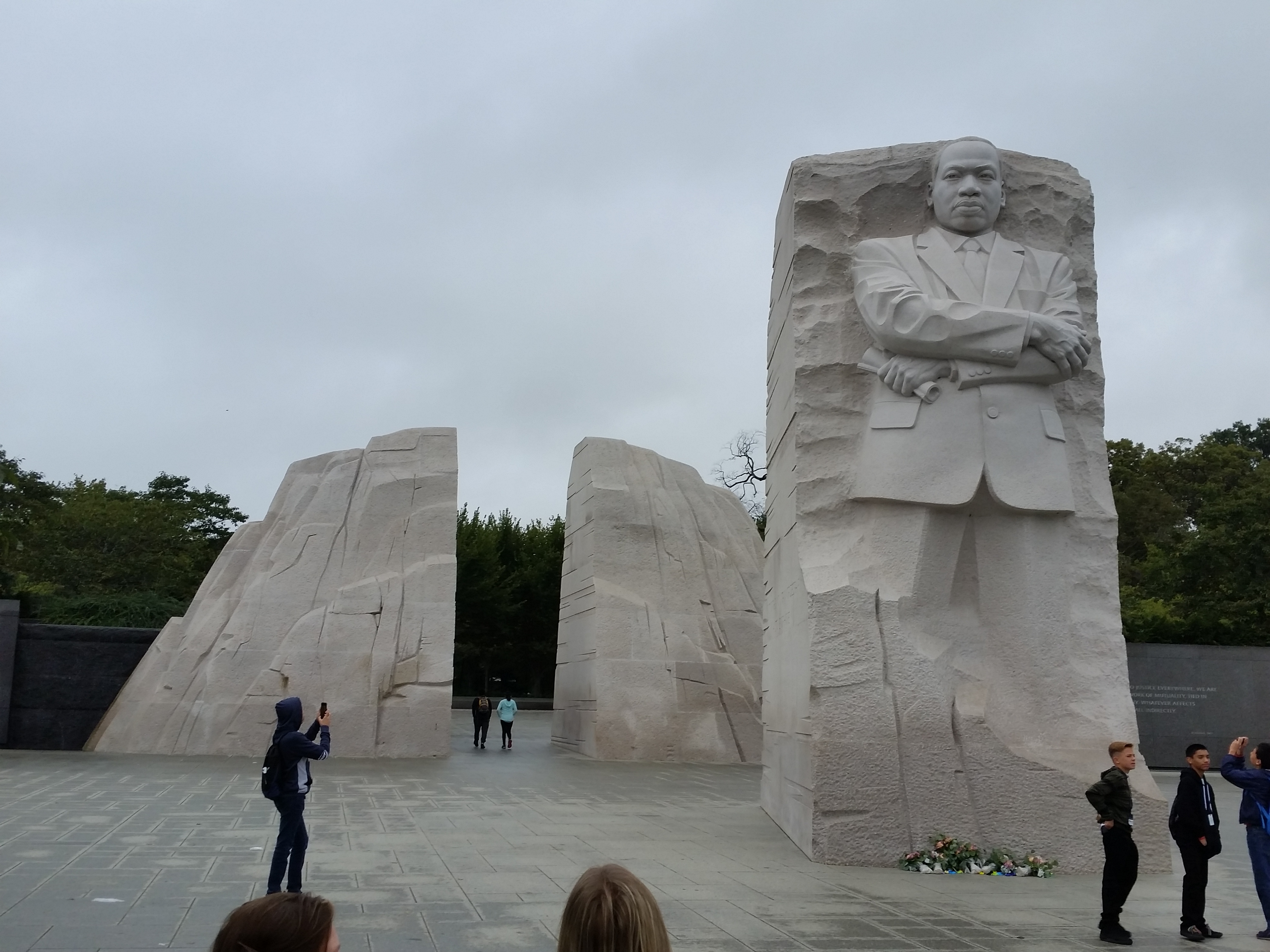 “From the mountain of despair, a stone of hope.”

Many of his quotes line the surrounding walls. I spent quite a bit of time just wandering around the grounds here.

Lincoln was up next: 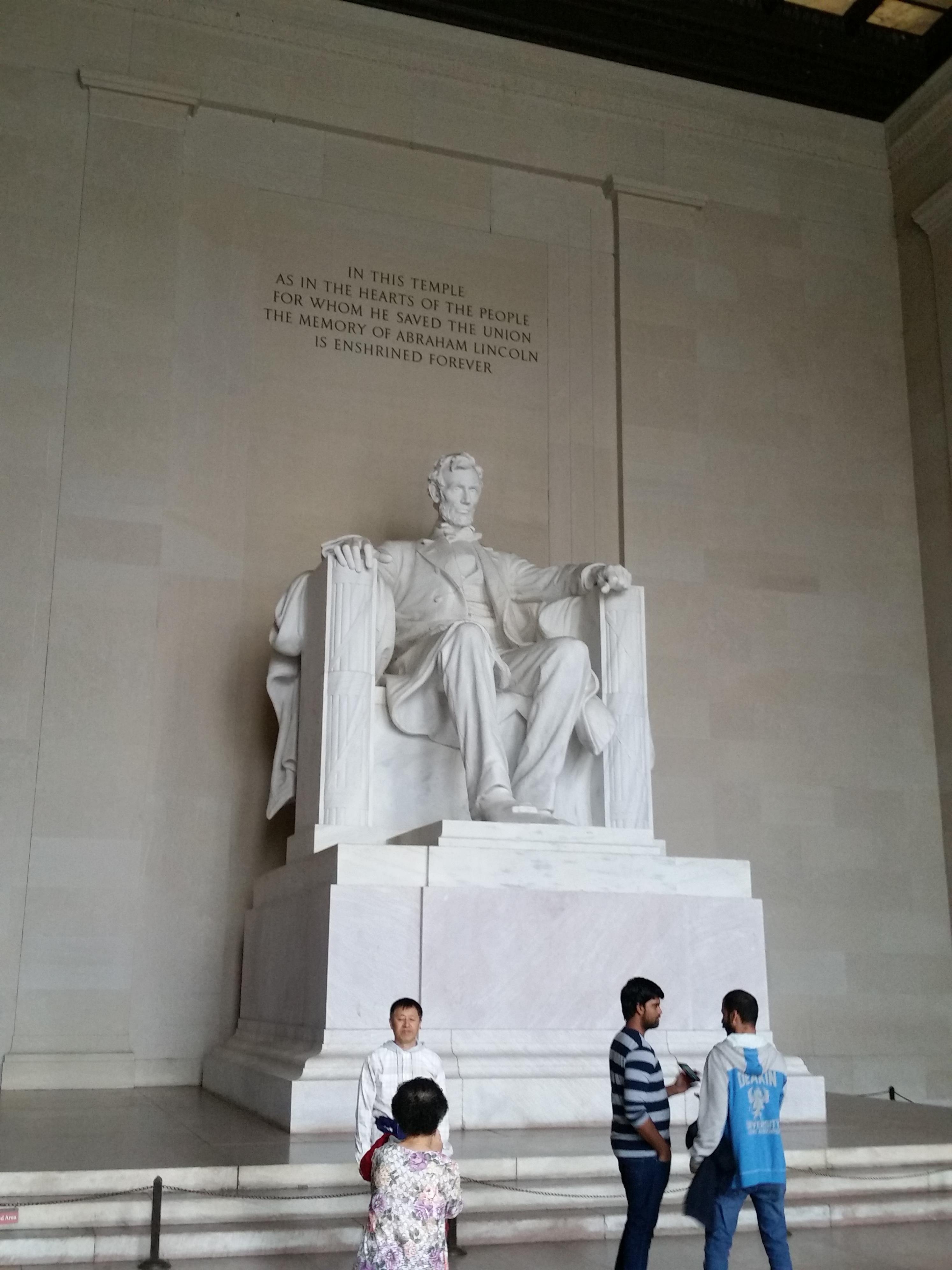 View back across the mall: 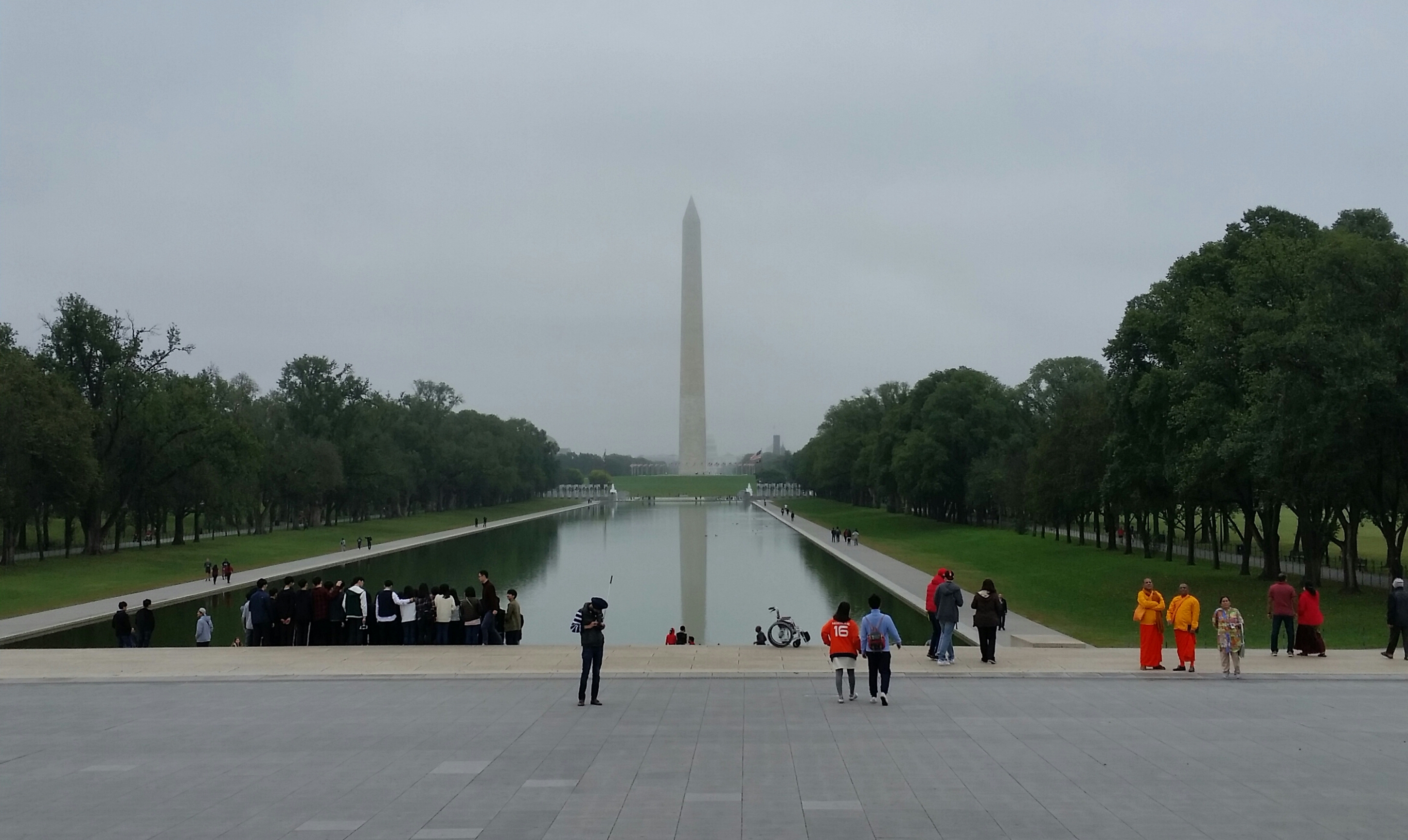 A new fact to me was that the Washington Monument was actually the tallest building in the world when it was completed in 1884. It’s still an amazing sight.

The word “memorial” can sometimes be misconstrued. It is easy to equate the term with “statue” or “monument,” but I don’t believe that is what memorials are for. They should make us think, make us remember, regardless of how painful or uncomfortable this may be.

Thus was my attitude as I began walking along the walls of the Vietnam Memorial. 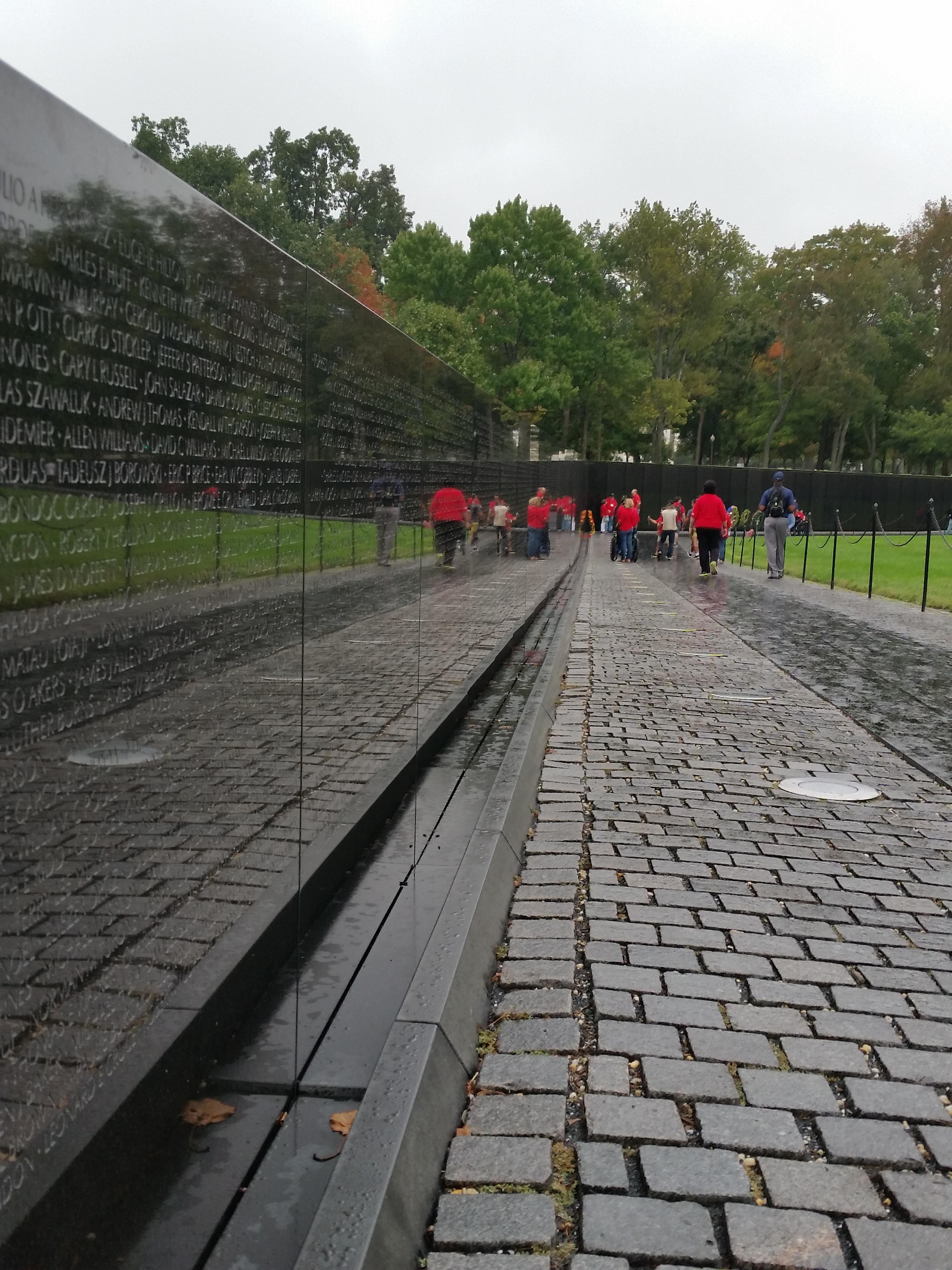 The walls begin so short. Just a handful of names. At a leisurely walking pace, it is possible to read them all. But as one continues downhill towards the center of the memorial, the walls get taller and the list of names becomes unfathomable. I wished I could have payed my respects by reading each one of them, but that just wasn’t possible.

After reaching the middle, the walls become progressively shorter again. It almost felt as if I was coming up from underwater, taking a much needed breath, as I passed the final name. For some reason, this memorial really shook me this time. The loss of life was nothing short of tragic. 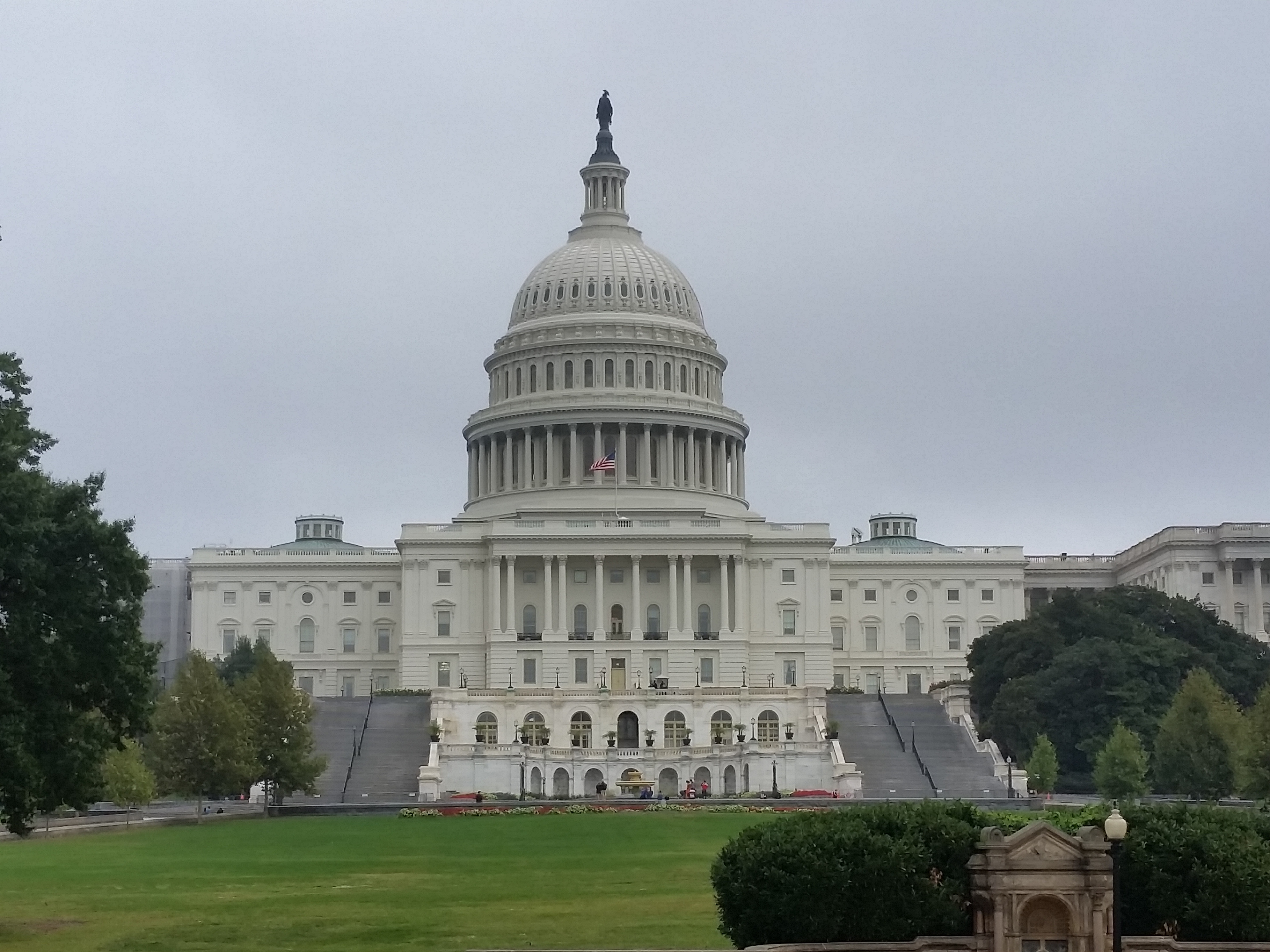 I met a couple of nice guys on BMWs. One of whom is a fellow blogger. Here is his website.  He snapped a nice candid photo of me working: 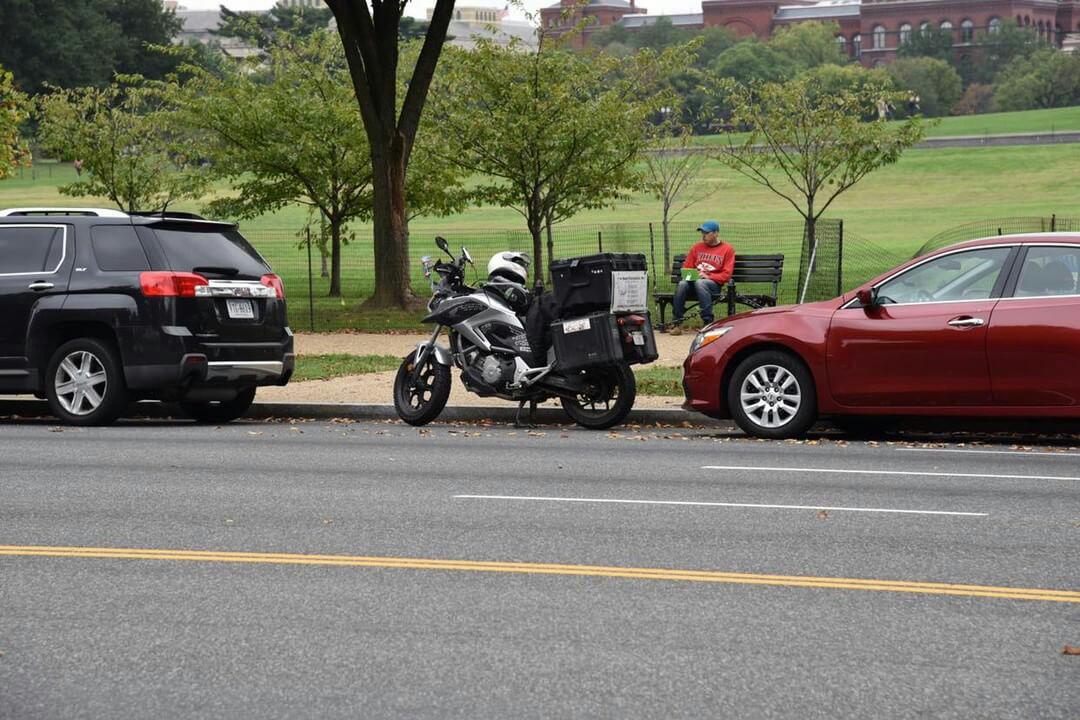 I had already had a full day, so I decided to treat myself. The Kansas City Chiefs have been having a wonderful season, but I had yet to watch one of their games. That had to change!

I headed for a sports bar in Arlington, VA.

The place was packed with people, as both the Baltimore Ravens and Washington Redskins were playing. As I stood watching, I began to chat with a couple of guys. One was wearing Chiefs hat, the other a Ravens jersey.

Beneath the Chiefs hat was a guy named Tim. He lives in Springfield, MO (a song place, Verse 3 Line 3) and was in the DC area for work. Funny enough, his last name was also Anderson. We had to explain to the bartender that we were not related.

Wearing the Ravens jersey was John. He was from the area, though he has lived in many places. He was really interested in my trip and enjoyed hearing about it. 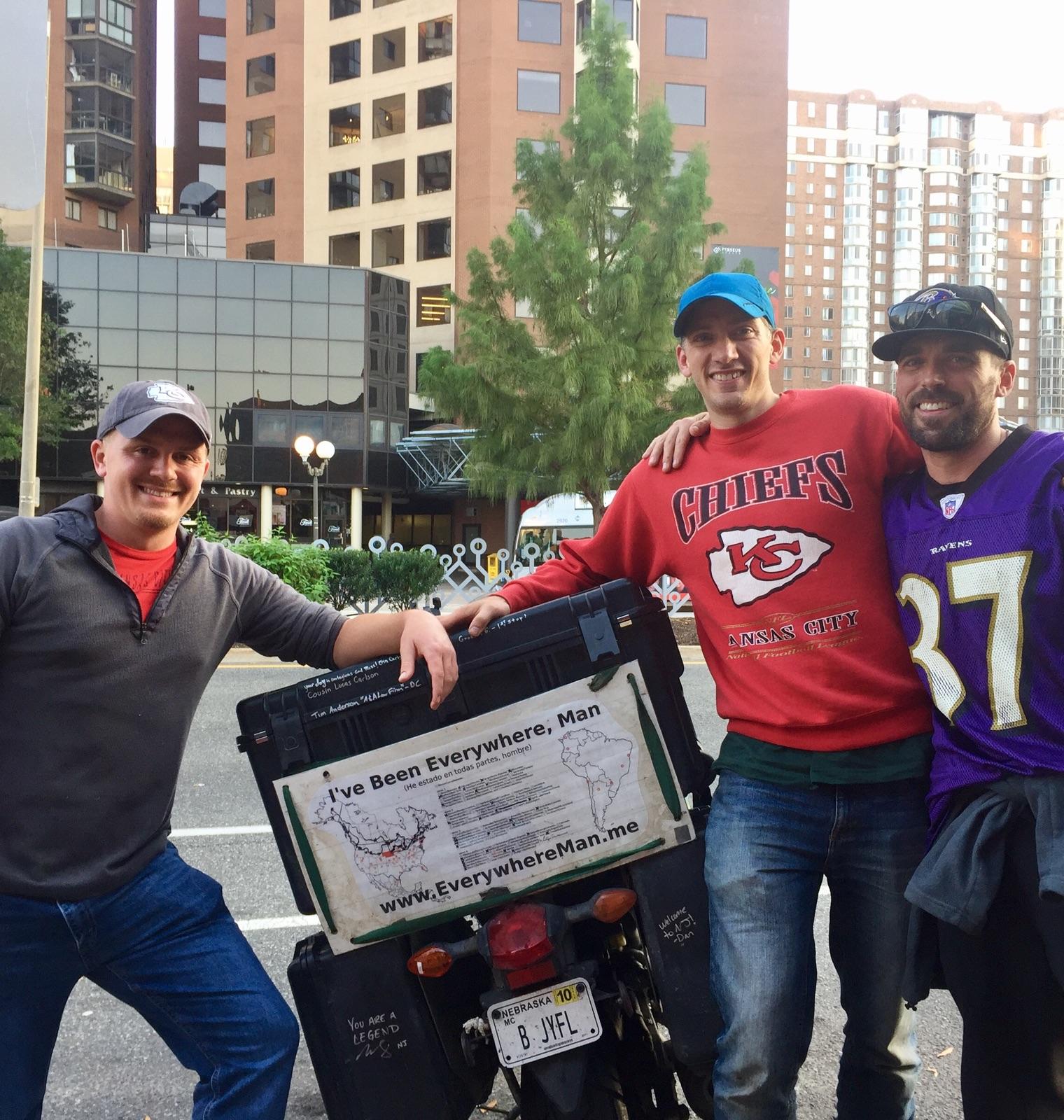 Though the Chiefs suffered their first loss off the season (on Tim’s birthday!), I still had wonderful company for the duration. Tim invited me to come see him when I pass through Springfield. John invited me to come crash at his place.

I think I picked the right sports bar.

John and I had a great time together. He’s a deep thinker who is fascinated by many things. He actually sat unflinchingly through my lecture on the musical harmonic series, an impressive feat. It was great to have a roof over my head again!

I slept in. (don’t judge me) John and I walked over to a McDonald’s before it was time for me to take off. Before that, I asked if he would accept the honor of crossing Washington off of my sign. I think he actually pumped his fist. I don’t know if anyone else has accepted this task with so much enthusiasm. 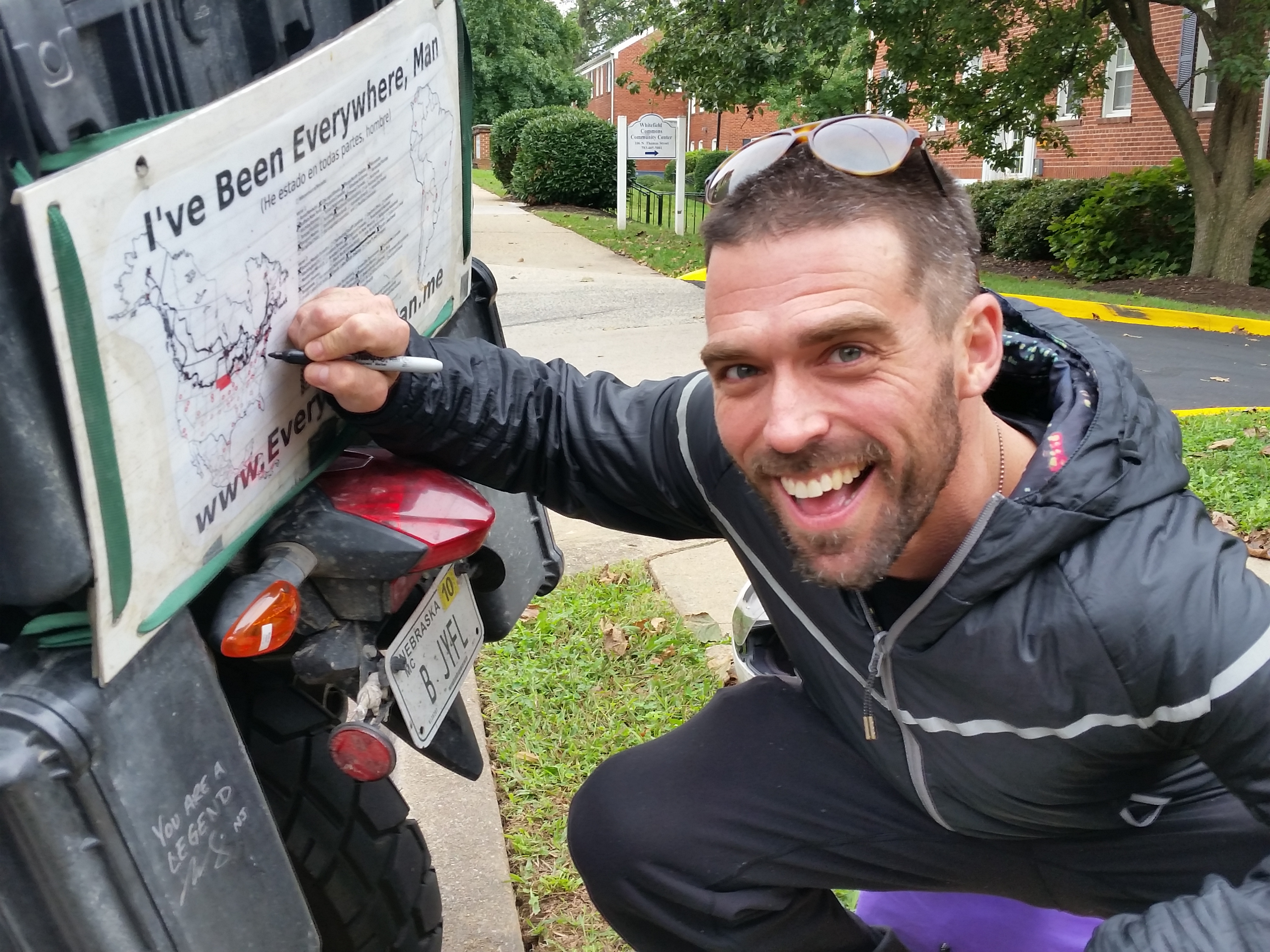 There’s still a bit more to tell from my time in DC, but I will wrap it up there for now. Thank you so much for reading! I hope my blog can be a bright spot it your day!