I feel like I’ve been a victim of false advertising. It’s not the first time it has happened on this trip. When you go from Fairbanks to Anchorage in Alaska, the locals tell you that Denali, the tallest mountain in North America, is on the way. Unfortunately, it is usually “cloudy.” I’ve yet to meet a non-Alaskan who has seen this mountain, so I very much doubt its existence. I have to commend them for their clever ruse though. Maybe we could do something similar in Nebraska….

This next round of false advertising has to do with the relationship between latitude and temperature. I was under the assumption that as one nears the equator, temperatures become warmer. But as I made my way south, I found that this was not the case. Good thing I had some good people with good roofs waiting for me. 🙂

I took a slightly scenic route from Louisville to Nashville, 31E. It passes by some interesting locations that connect with Abraham Lincoln’s childhood. His birthplace: 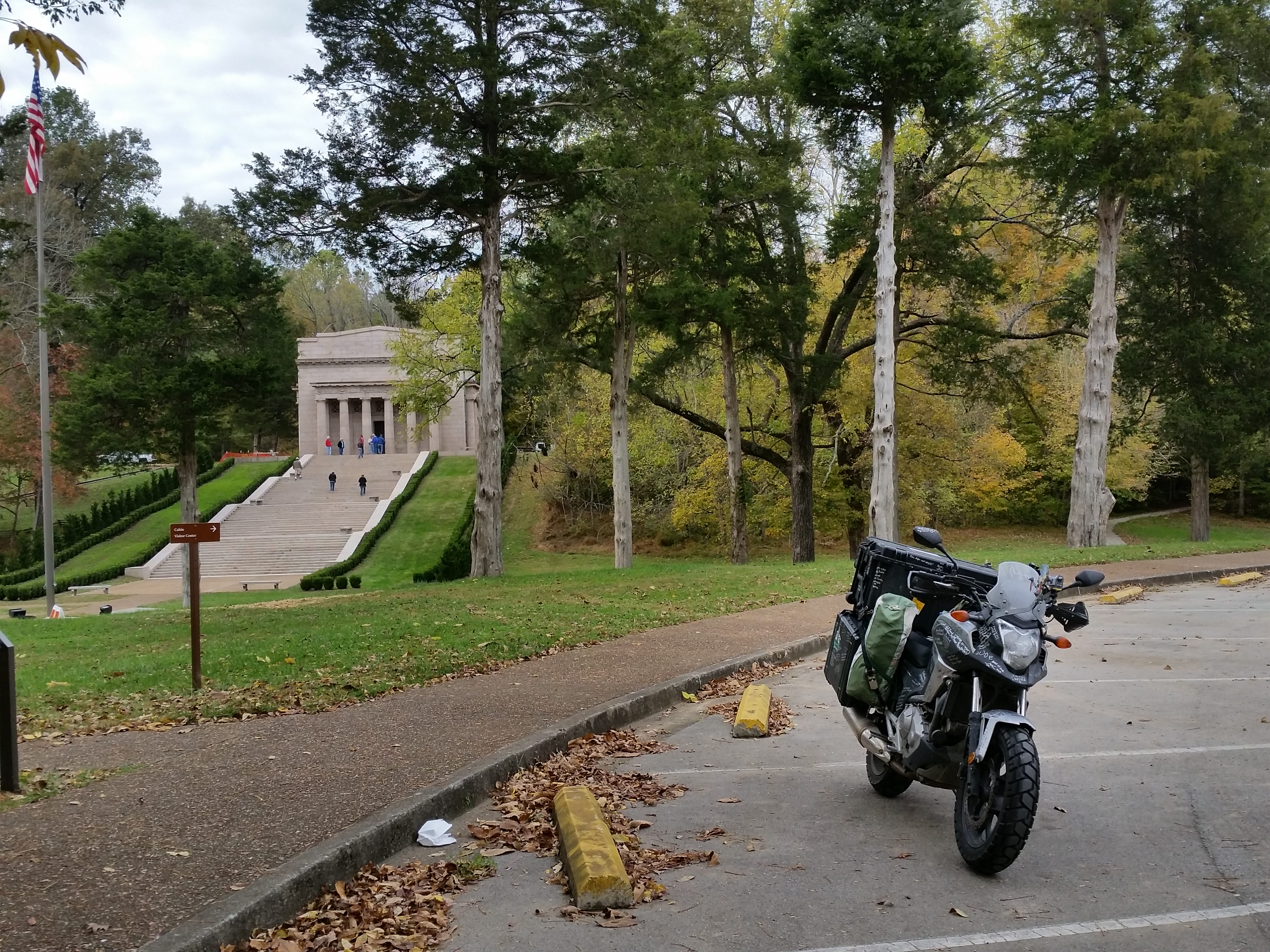 I crossed over into Tennessee, place 40 of 92. I will obviously find better pictures than this one, but it’s a start. 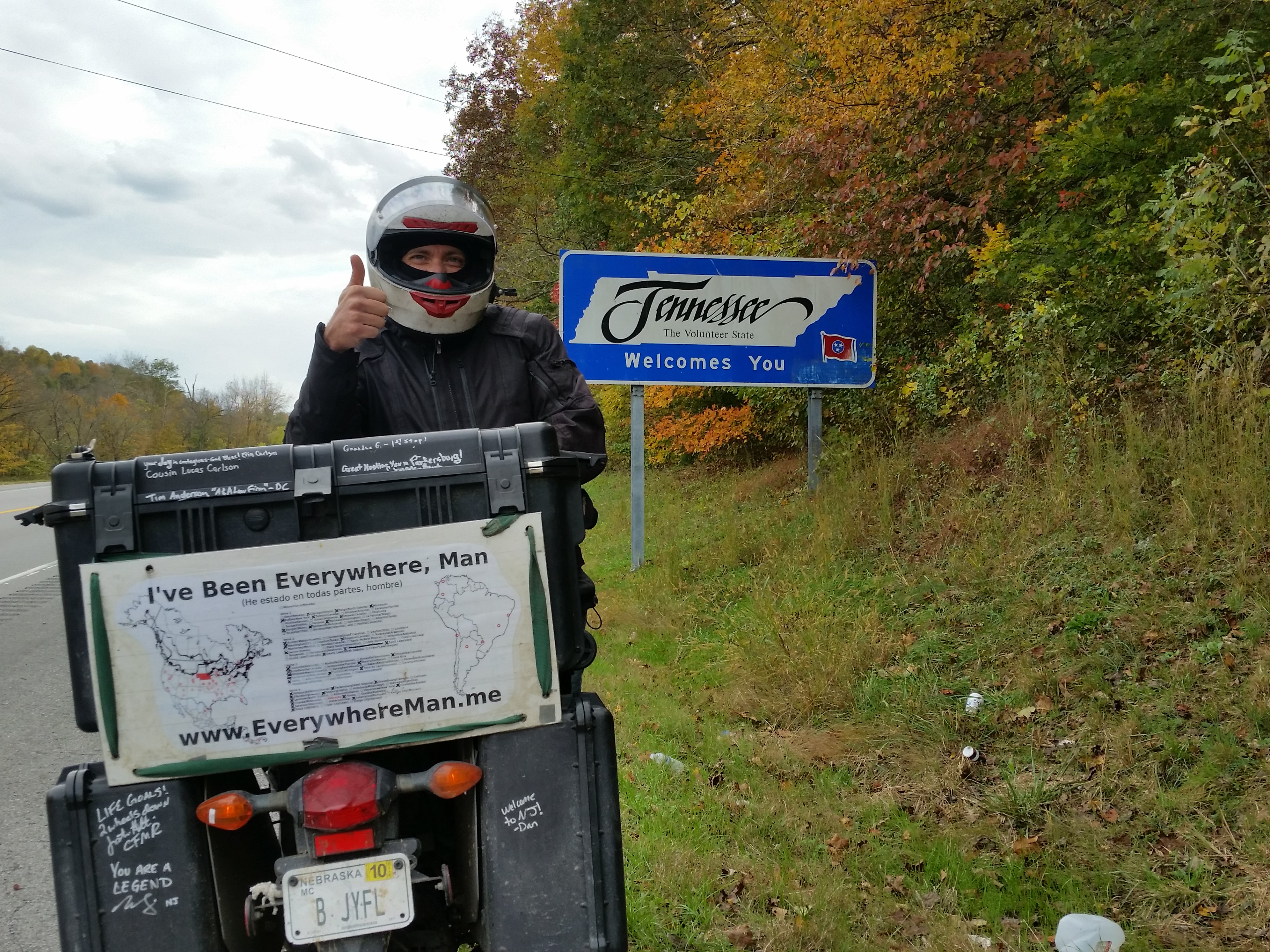 Nashville would be the first place of the trip where I had multiple hosts. Talk about an embarrassment of riches! The first person to which this Nebraskan parasite would be attaching itself was a gentleman named Travis. He had contacted me on ADVrider and offered food, a bed and even a motorcycle escort. I could scarcely pass that up!

He was tending bar at a cigar bar called Casa de Montecristo near downtown. I rode through just a bit of drizzle, but made it to my destination without any issues. Travis greeted me warmly and brought me in out of the cold. He bought me a nice cigar and made me a fancy drink, a Smokey Old Fashioned (with real smoke!). 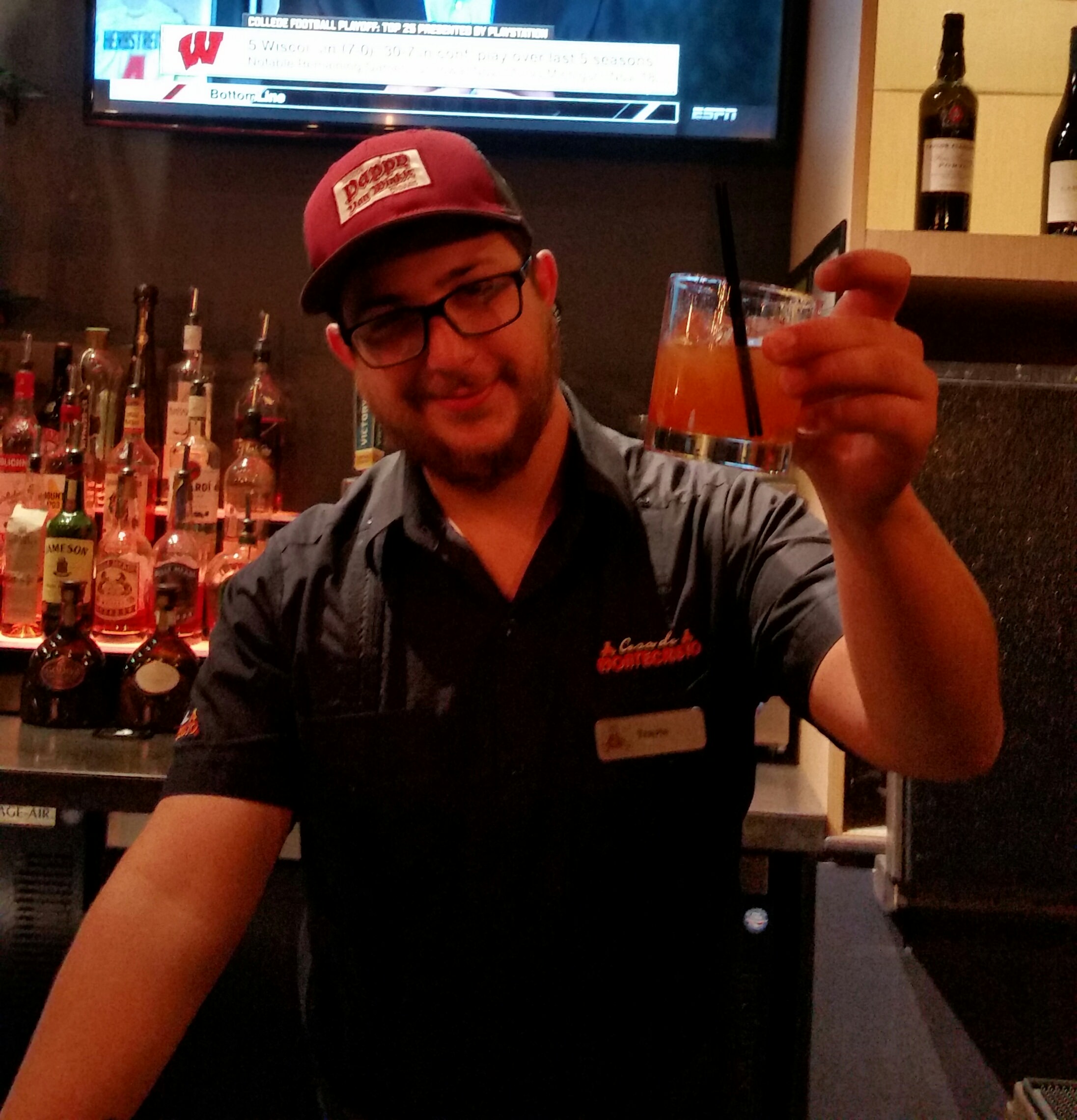 It didn’t feel like we were strangers for long. While the bar was calm, we had some good opportunities to chat. Though he is still relatively young (compared to me, at least), he’s lived quite a life. Over the next couple of days, I would grow to like him more and more.

Travis was eager to introduce me to one of his friends, Bo. Bo is a criminal defense attorney, but used to tour the country as a tribute artist for Johnny Cash. Perhaps this combination would be strange throughout most places in the country, but it seems like a fairly typical Nashville story. There’s a good chance that he will be the only person I meet on my trip who can sing all 92 places in the song.

I had a good time chatting with Bo and another friend, Thomas, who bought me a second cigar. Travis told me that he would be off around 9pm, at which time we would swing by Broadway (the downtown area), maybe have some drinks and be home around midnight.

It turns out Nashville had different plans. My welcome would be much less mundane. 🙂

A large corporate group came into the bar around the time Travis was supposed to be off. This pushed his schedule back significantly, until after midnight. He checked on me often, apologizing for this delay, but I was enjoying the company and conversation.

A further “complication” was that the strike of midnight meant that it was now Bo’s birthday. This was a special occasion! Though I had my doubts, Bo was confident that he could find a band playing on Broadway who would let him get up and sing the song. I don’t know who he knew or how much he tipped, but before long he was on stage at a bar called Tootsie’s.

He said he hadn’t sung the song in a couple years and I caught him googling the lyrics shortly before he went up. He knocked it out!

I especially like the line, “I’ve been everywhere man, with Brett on his Honda there man.” 🙂

This is an impressive performance of the song in its original key. Even more impressive that he did it while holding two beers and two cigars. He is a natural performer. I really like how he kept speeding it up at the end.

My eclectic group of new friends kept on rolling: Multiple bars, stolls down Broadway, bartender impersonating, a milkshake-free diner (where Travis bought be a burrito)….before we knew it, the clock had struck 3am. 🙂 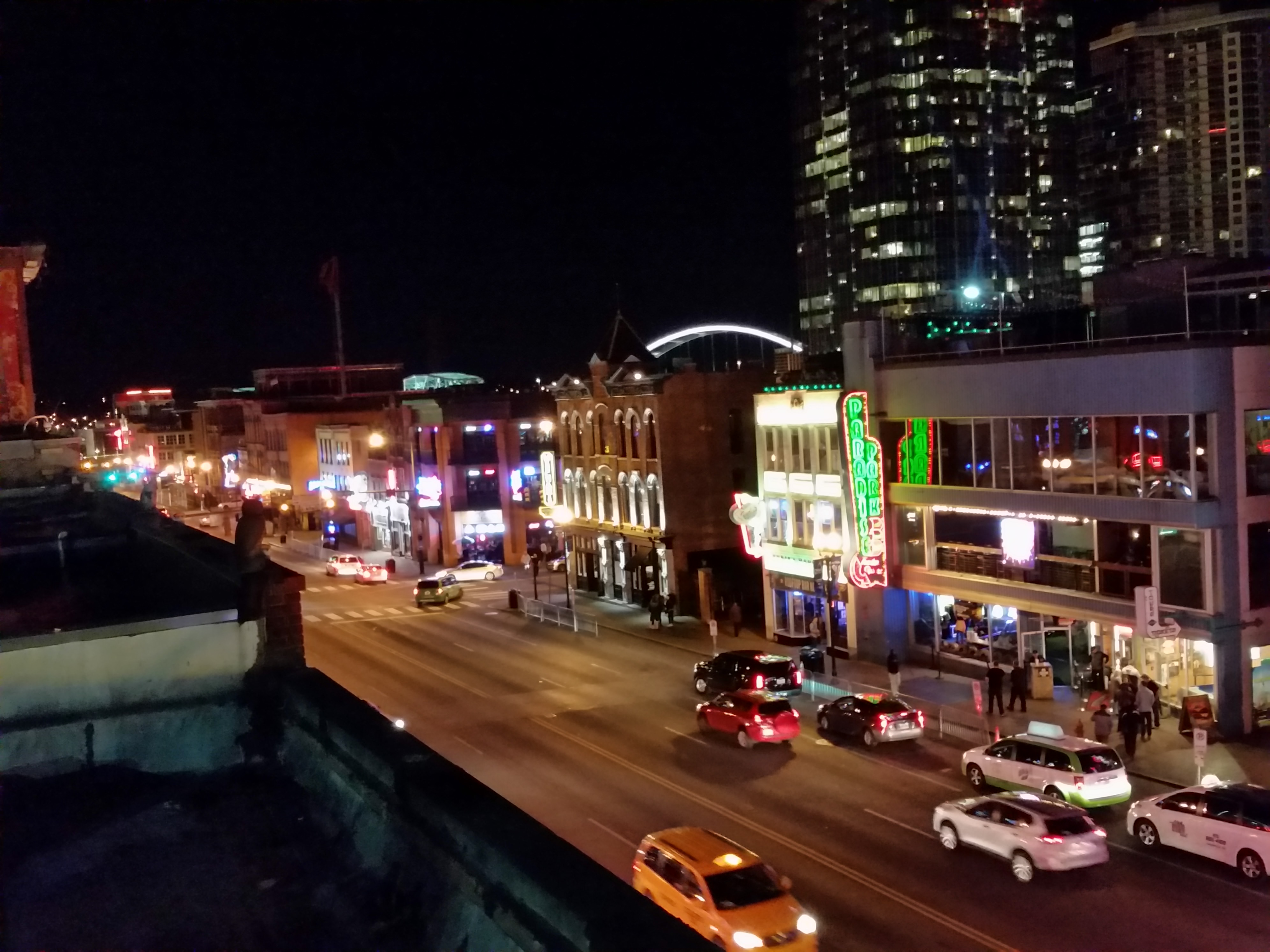 Knowing that we still had a ride home, Travis and I had taken it a little easier than some others in our group. I was really impressed with how Travis really cared for his friends, making sure they got to their Uber car safely and asking them to text when they got home. He has a great heart.

Travis lives in Columbia, which is about a 45 minute ride to the south of the city. It was a chilly night, so the ride was more invigorating than enjoyable. By the time I brought my stuff in, met his “hip-wagging” yellow lab Oakley, brushed my teeth and bedded down; it was nearly 5am (though I began my day in eastern time so it felt more like 6am).

All in all, just another hum-drum, run of the mill Tuesday night in the Music City. 🙂

We slept in a bit before having breakfast. I made Swedish egg coffee and Travis prepared a protein packed breakfast. “I like to feed my guests like Hobbits,” he said. 🙂

We had a pretty chill day. I did an oil change and a couple of other mechanical things. He has a BMW 1200GS named “Kaikaina.” 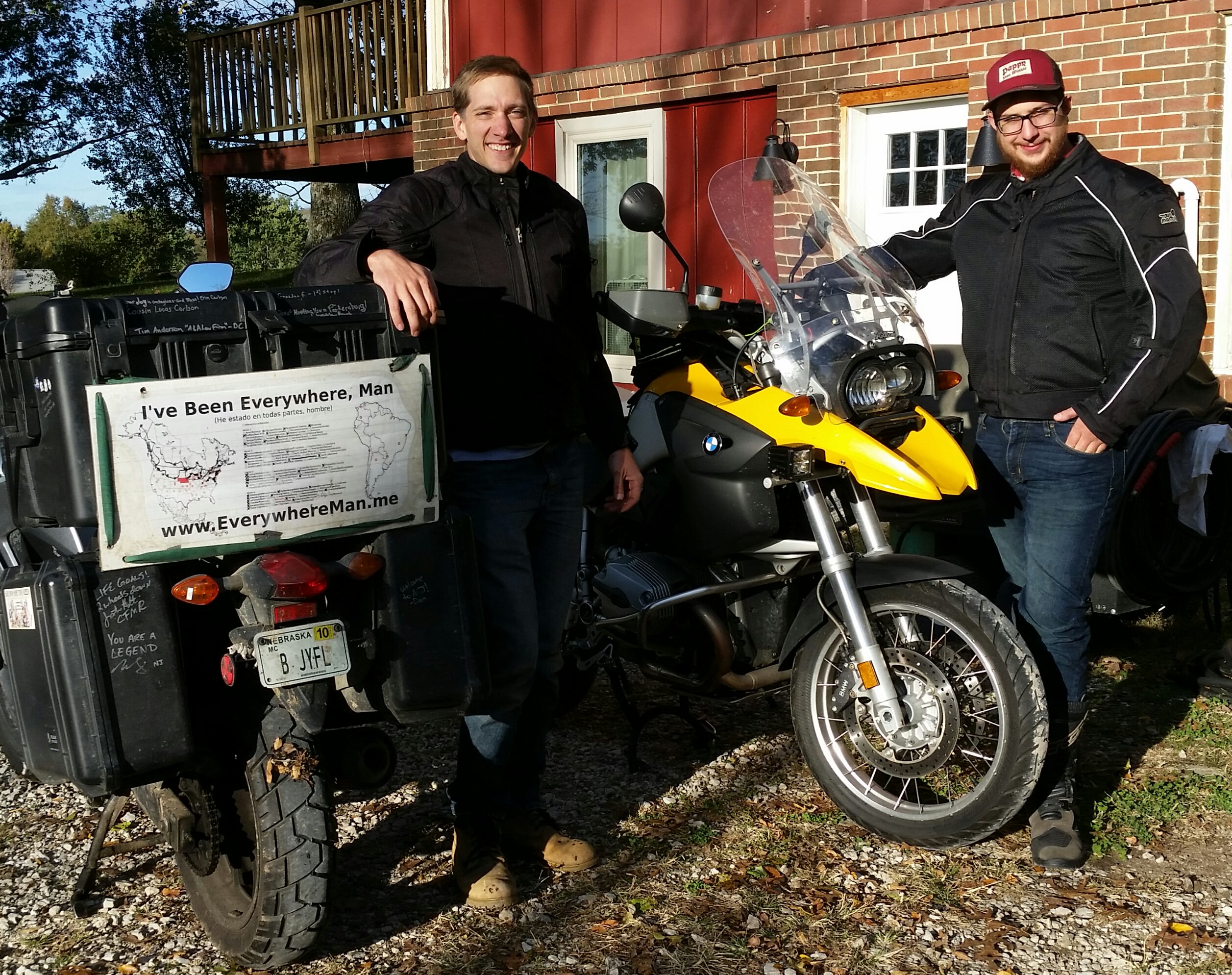 Though I think the name is a coincidence, I noticed a seemingly Nebraska-themed street near where he lives. 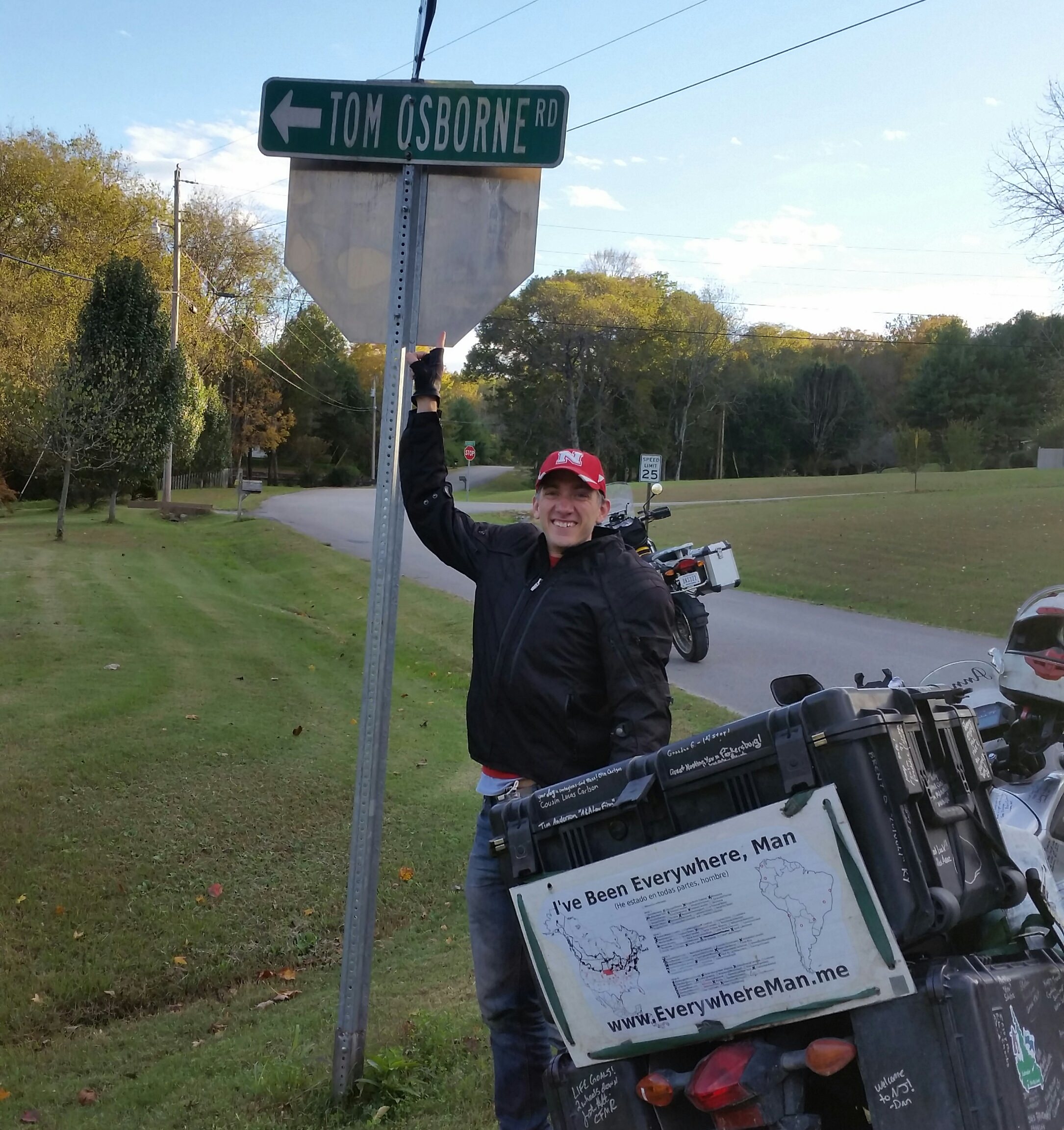 We enjoyed a nice sunset and rode a section of the Natchez trace. We were losing light and saw ample amounts of deer, so we headed back to his place.

I got to meet some more of Travis’ family, eat a good meal, then it was time for round two of Bo’s birthday!

With the darkness and coldness, we drove to a bar where they have a Wednesday night trivia. I met some more great people and Travis ensured I always had a cold beer in my hand. There were no trivia questions about corn, soybeans or cattle, so this Nebraskan was not much help, but our team still won.

I got to smoke the cigar that Charles in DC had bought for me a week earlier. 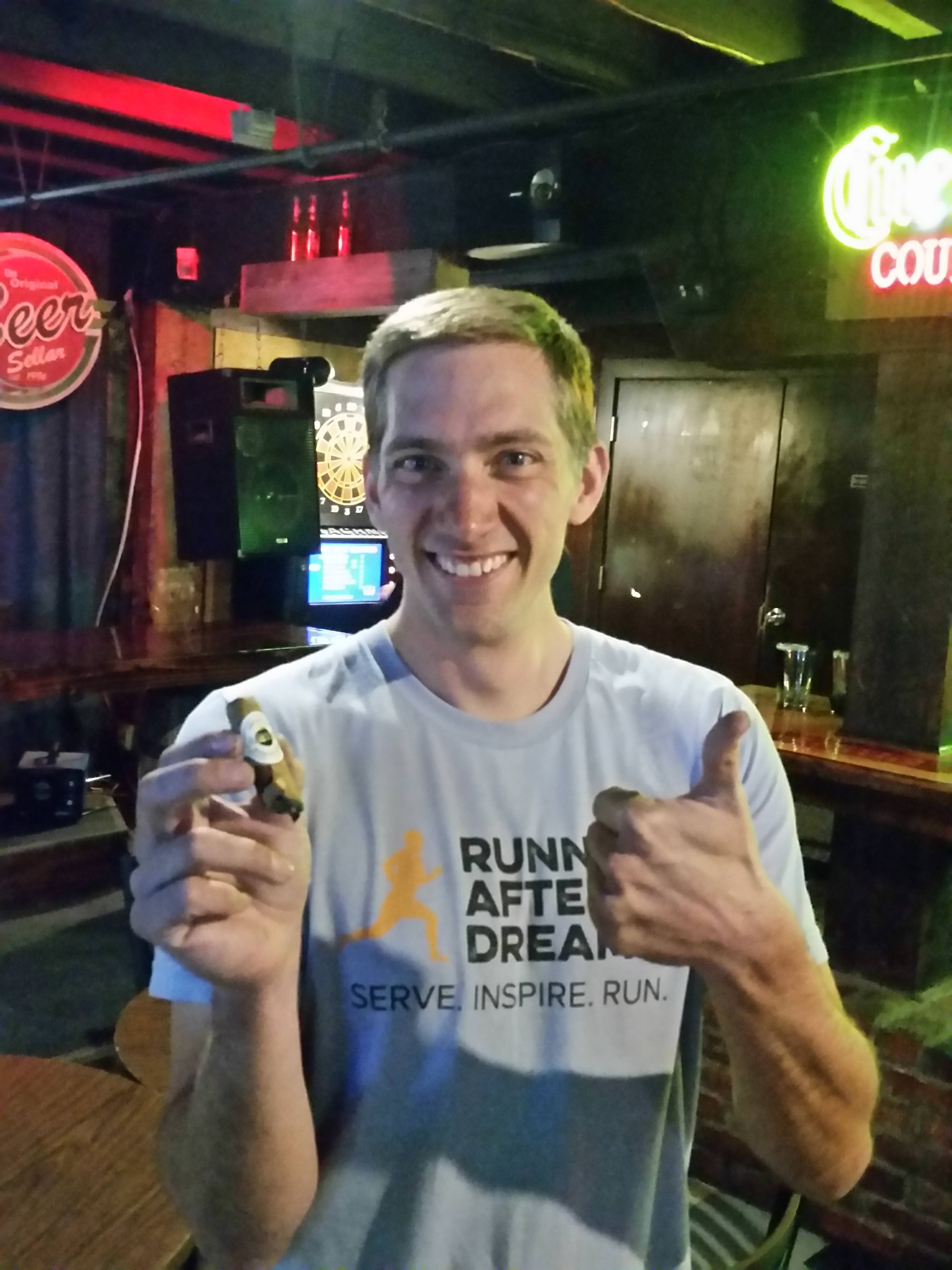 I actually lost at pool… 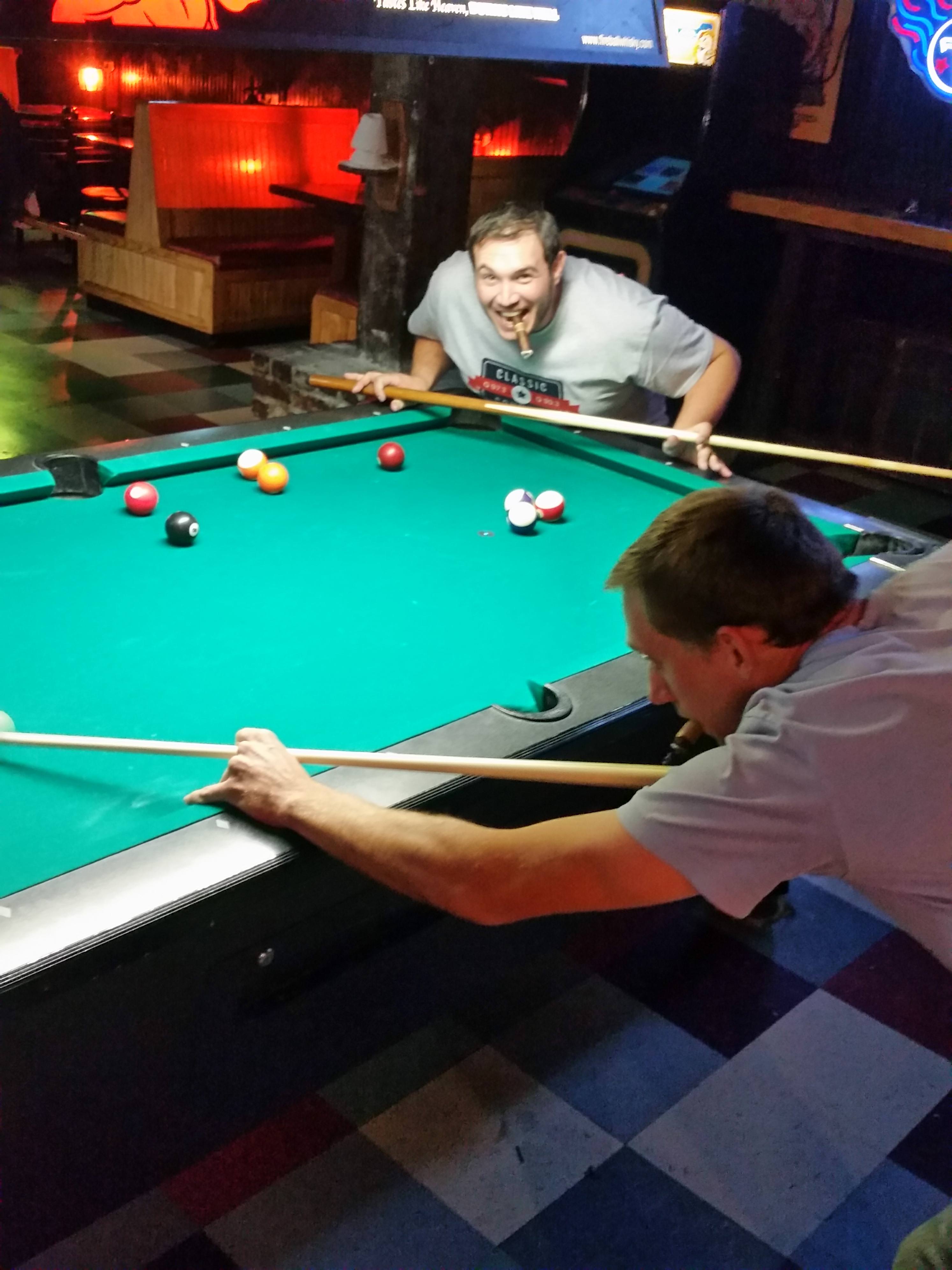 ….but then we went to a British pub… 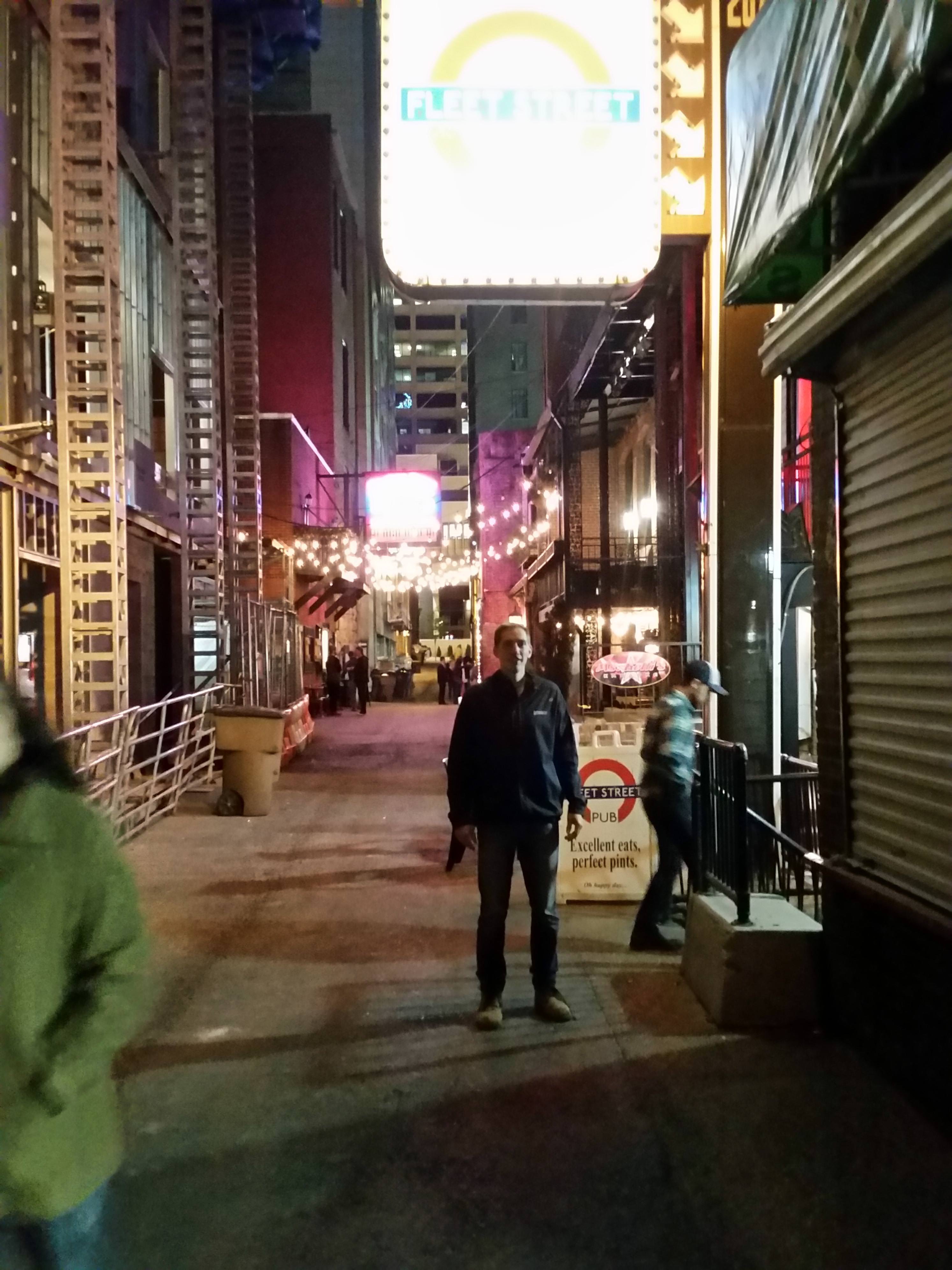 ….where we played darts…. 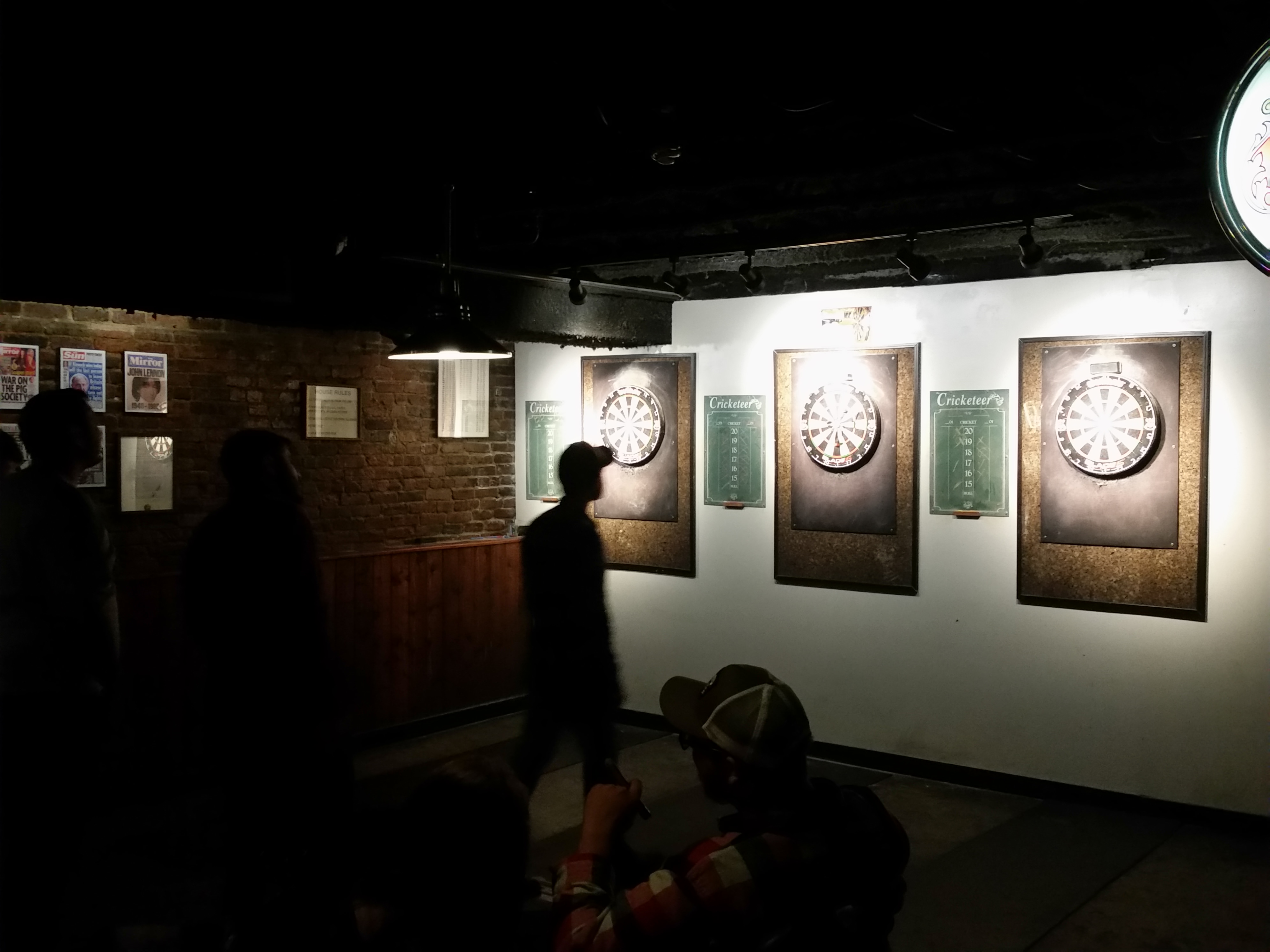 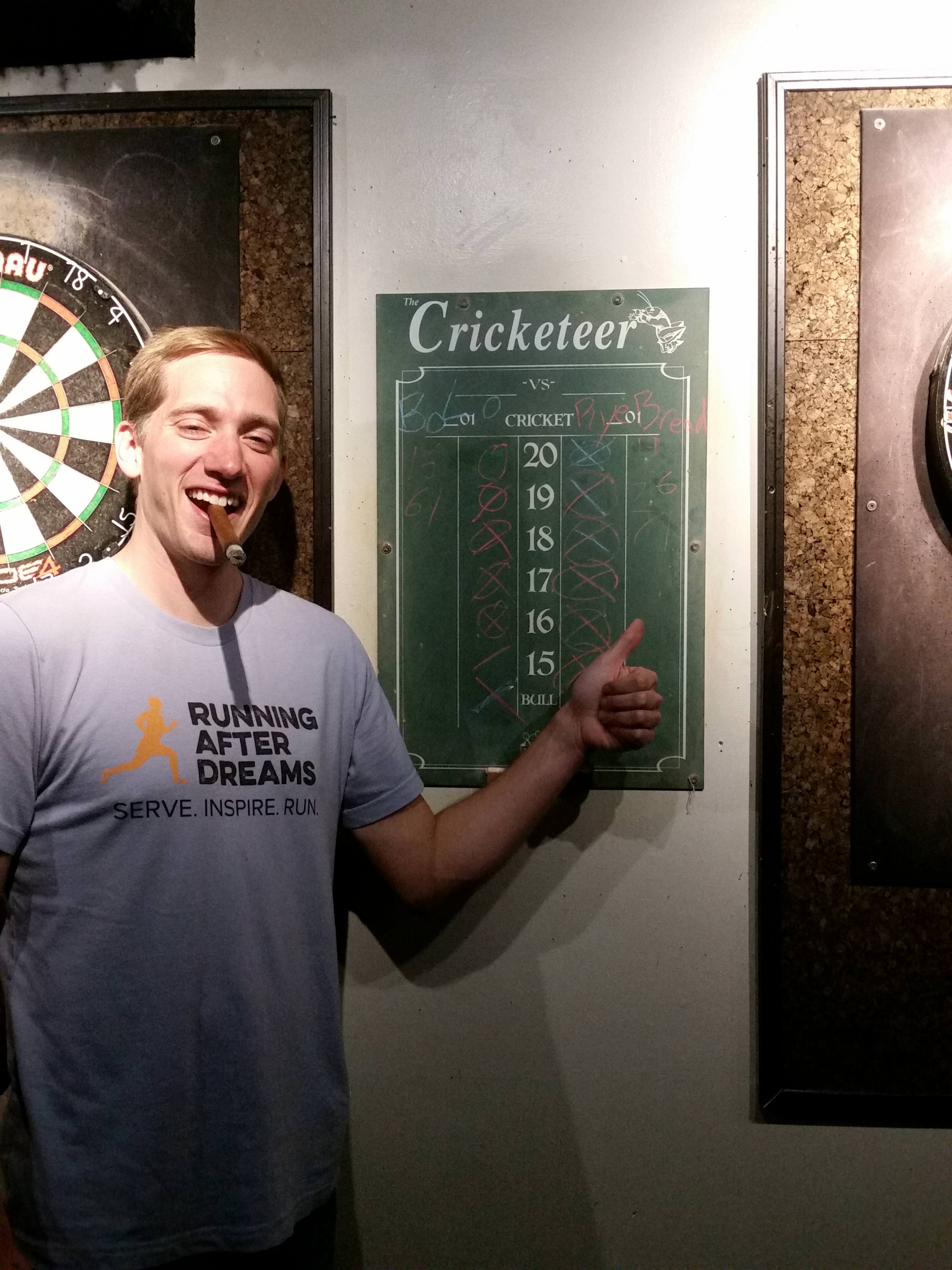 There were some great conversations to be had amongst this group. I’m not sure how everyone knew each other, but they were all such interesting and genuine people. They definitely did not seem like strangers.

One further stop was at a karaoke bar. Bo and I decided to do a duet of “I’ve Been Everywhere.”

The key is not really my friend, so it was not as clean as my Nova Scotia performance; but the key did allow me to add some tenor harmonies. It was really fun to sing it with him. 🙂

Thursday, October 26th (I’m not really sure when midnight was) 🙂

Travis and I had some more great conversation on our way back home. We are like-minded individuals and have lots of things in common. It was such an honor to be hosted by him.

This ended up being an early night, as we were home by 4am.

I got some work done in the morning and had another meal prepared for me. Travis had a gift for me: After looking at Sonic, he thought that the bearings looked the same as skateboard bearings. They turned out to be a perfect match! I wasn’t sure how I would replace them if anything ever went wrong, so it is nice to have a spare set. 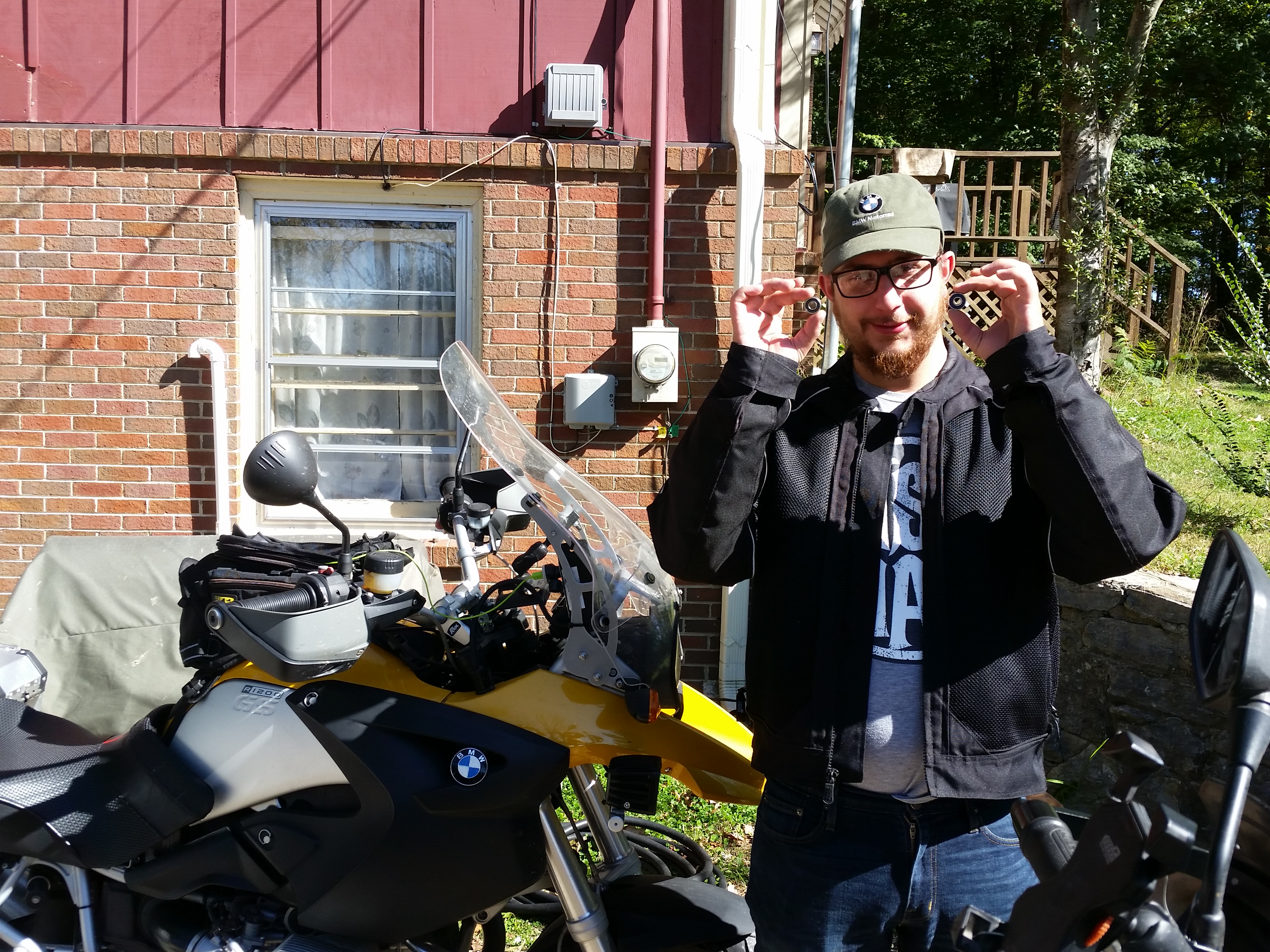 We went out for a delicious brunch at a place called Katiepie’s. Then it was time for some business. 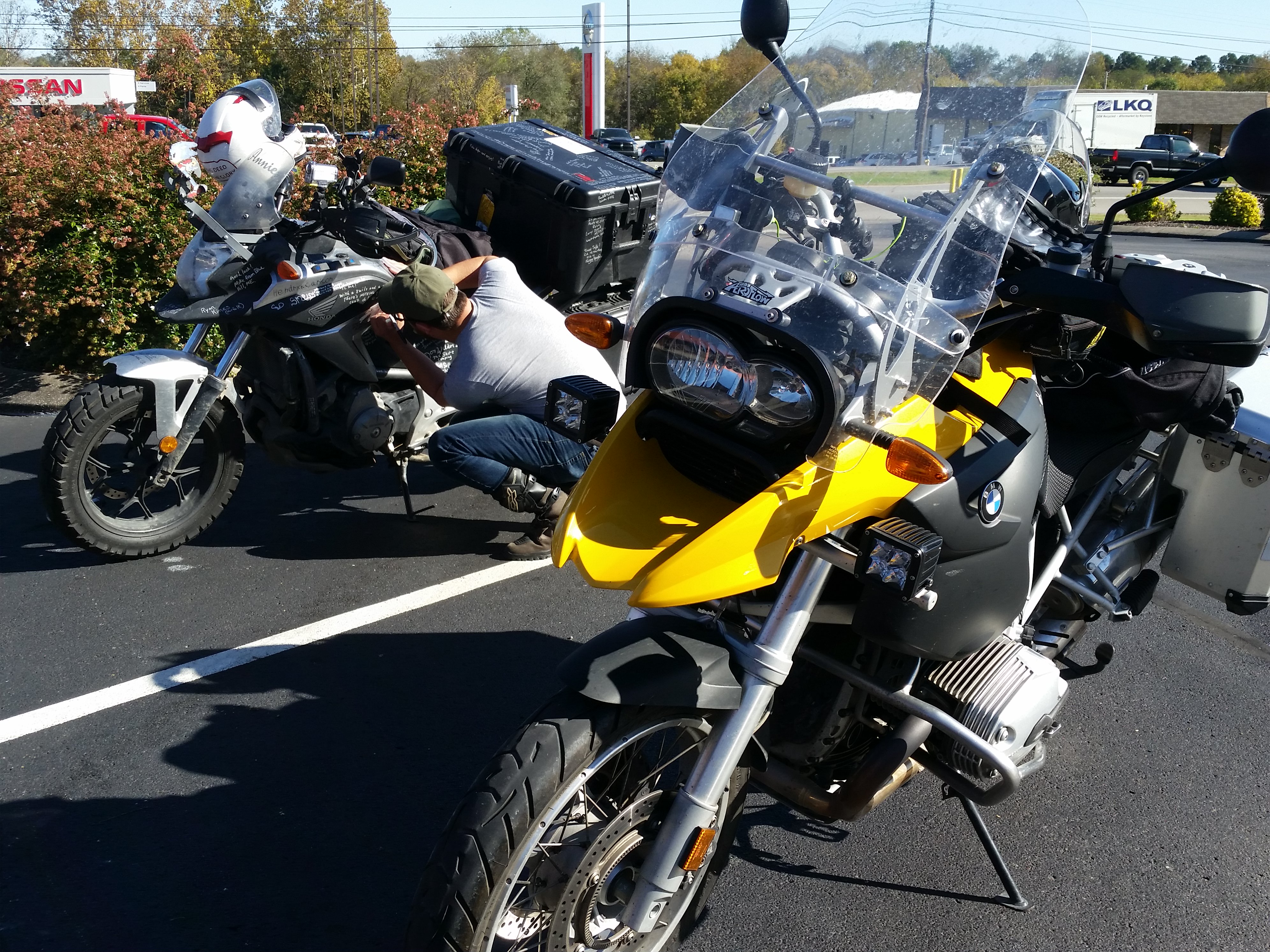 Travis crossed off Tennessee…I still had some work to do in Nashville. 🙂 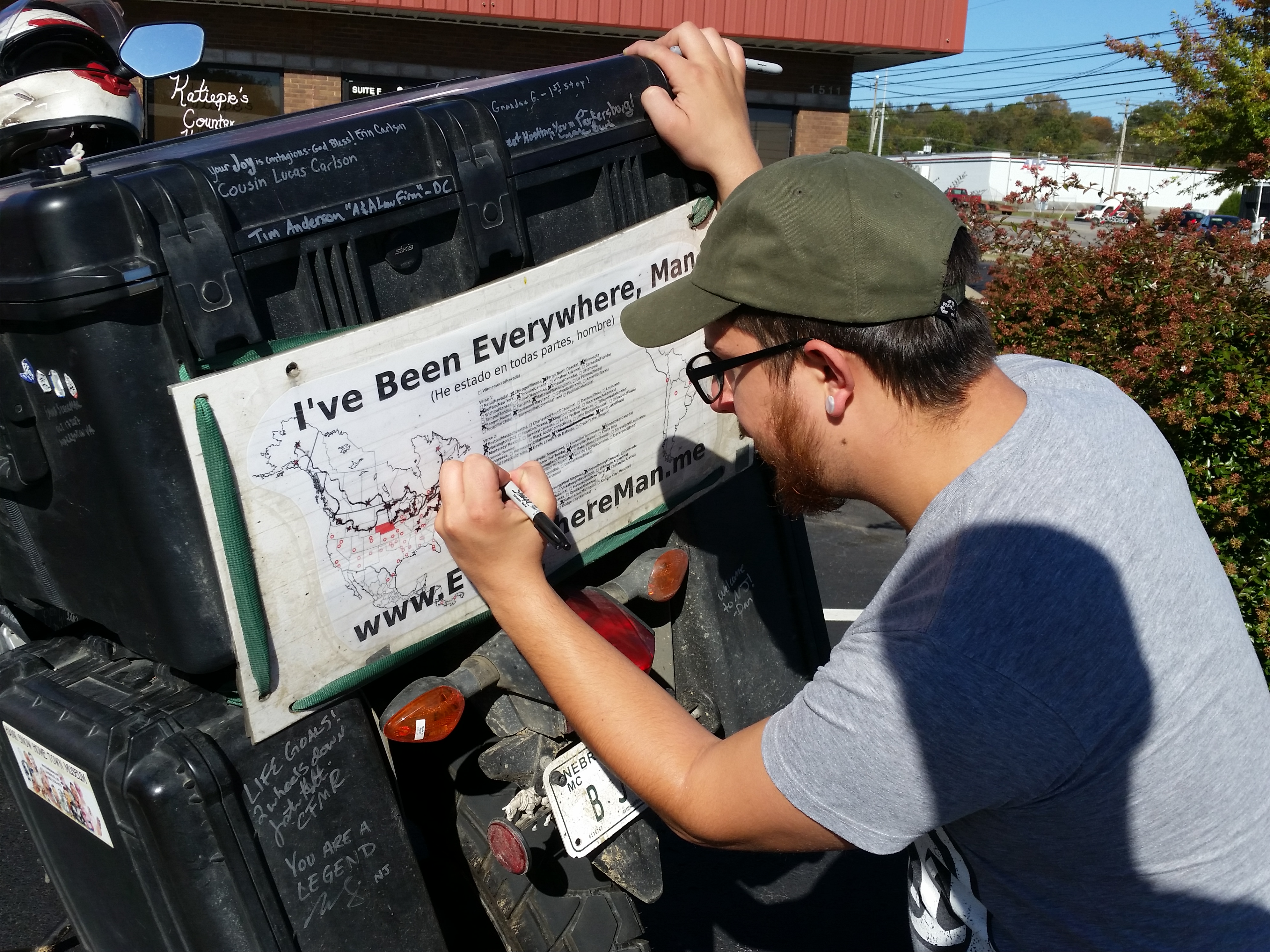 I don’t know how much he spent on me between beers, meals and cigars not to mention his time. He really treated me like an honored guest.

But my time in Nashville was not coming to an end, nor was my time of being taken care of by its residents. After a library stop, I continued to my next Nashville hosts, Tricia and Riley.

I’m going to end part one there. More to come, hopefully tomorrow.

Realtime update: Sitting at a library in Jellico, TN. Other than feeling a bit behind on my blog, I’m doing well. I had eight consecutive nights beneath a roof and the weather looks like it is going to get more Southern. I’ll try to take care of Nashville today, tour around the Smoky Mountains on Wednesday then on to Charleston on Thursday. God bless!