We continue into the heart (corazon) of Mexico, carried by a dream and a limited command of Spanish. We learn some new words, hit a mileage milestone and decide not to exchange our bear spray for money.

Time for some good riding! As much as I enjoyed having my parents with me, driving in tandem is a bit like hauling a long trailer. For every lane change I always tried to ensure that there was sufficient space for both of us. I spent a lot of time with my eyes in the mirror.

My decision to take the SE road out of Monterrey, meant that I got to ride a great stretch of road that cut through one of the many mountain ridges. Route:

My time on the fun road began wet and foggy. This this dampened my throttle a little bit, but not my enthusiasm.

I saw shadows around one of the many bends and instantly found myself in a sunny day. I was surprised how quick it changed. Somewhere during this stretch (I missed the exact moment), Annie rolled over 50,000 miles. Hooray to our heroine! Half a hundred! 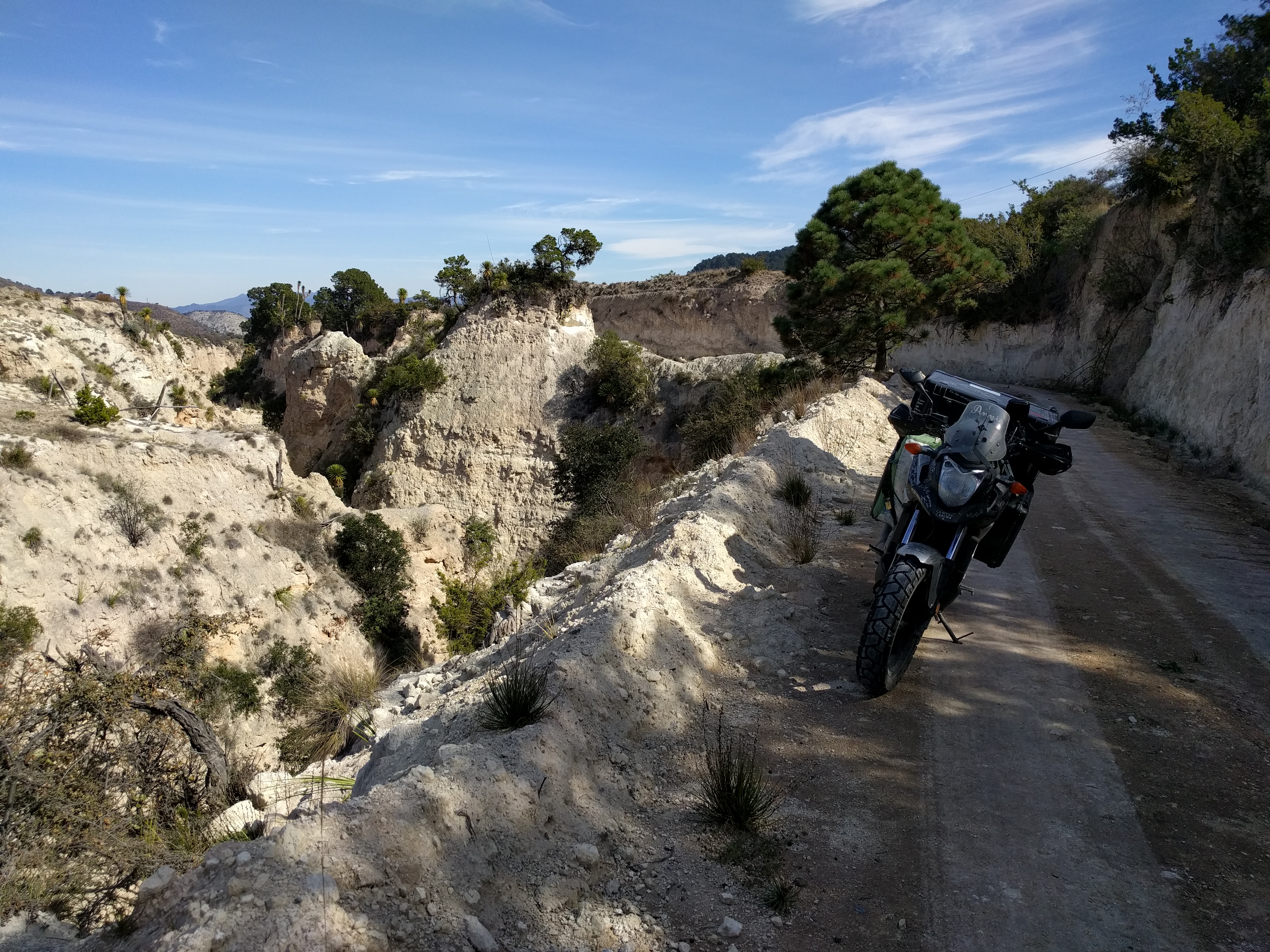 This road was absolutely wonderful. The surface was in good condition and the curves were well banked.

I pushed my gas a little farther than I should have and probably came within 5-10 miles of running dry. At the station, a guy walked over and asked, “Mil docientos?” (Literally “1,200”, he was asking about the engine size). When I responded that Annie had just a 670cc engine he said, “Oh, I thought you’d have a bigger engine since you are such a big guy.” I’m still not sure how I feel about this comment. 🙂

The rest of the route was uninspiring highway driving through mostly barren countryside. I could not fathom how many people I saw, even in the middle of nowhere, selling things by the side of the road. They seem to sit there all day, often times with their kids, waving at traffic. This is not a “hello” type wave, it is a palm inwards beckoning motion which begins as soon as a vehicle is in sight. I don’t know what they are selling, but it’s obvious that they have very little.

This was a long day in the saddle (about 360 miles). It will be a rare occasion that I will attempt this many miles in a day in Mexico or Central America. There are just so many variables at play that can slow one’s progress. Despite the number of miles, I still arrived in San Luis Potosi around 5pm.

My place for the night would be a hostel recommended by my friend Mitch in New York, Corazon de Xoconostle. The cost was just under $10/night. A young lady named Alejandra was working the desk when I arrived. She spoke English very well and helped me with a few of my Spanish questions. She got me set up with a bed and made sure I had everything I needed. This was my first time in a hostel in Mexico, so it was great to be welcomed so warmly. 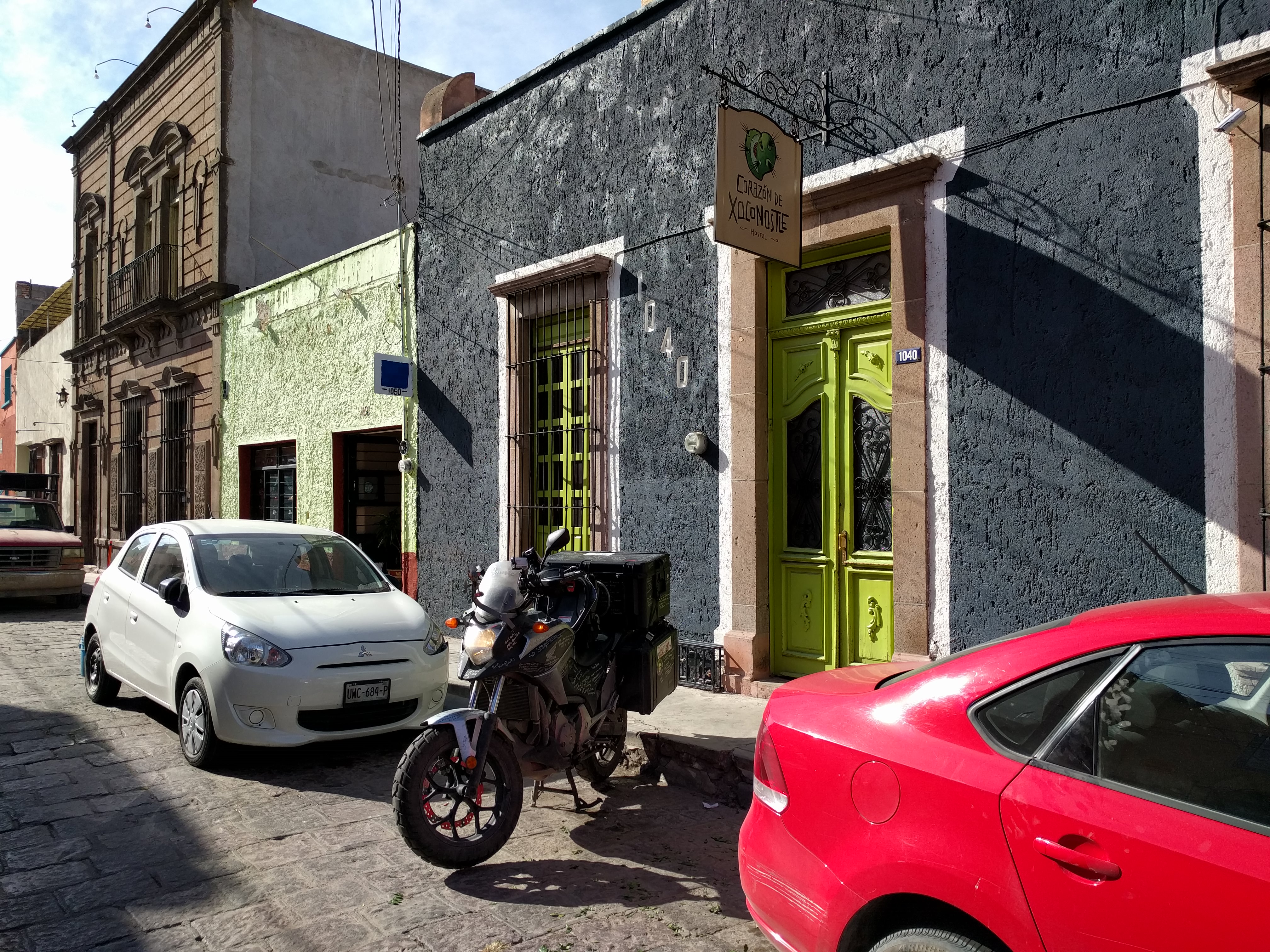 She said I could bring Annie inside the courtyard, but I could not make the turn into the door from the sidewalk. “It’s like a bus,” was Alejandra’s comment. 🙂

I had my choice of beds in the bunk room and chose the one on the top. (I’m scared of depths.) 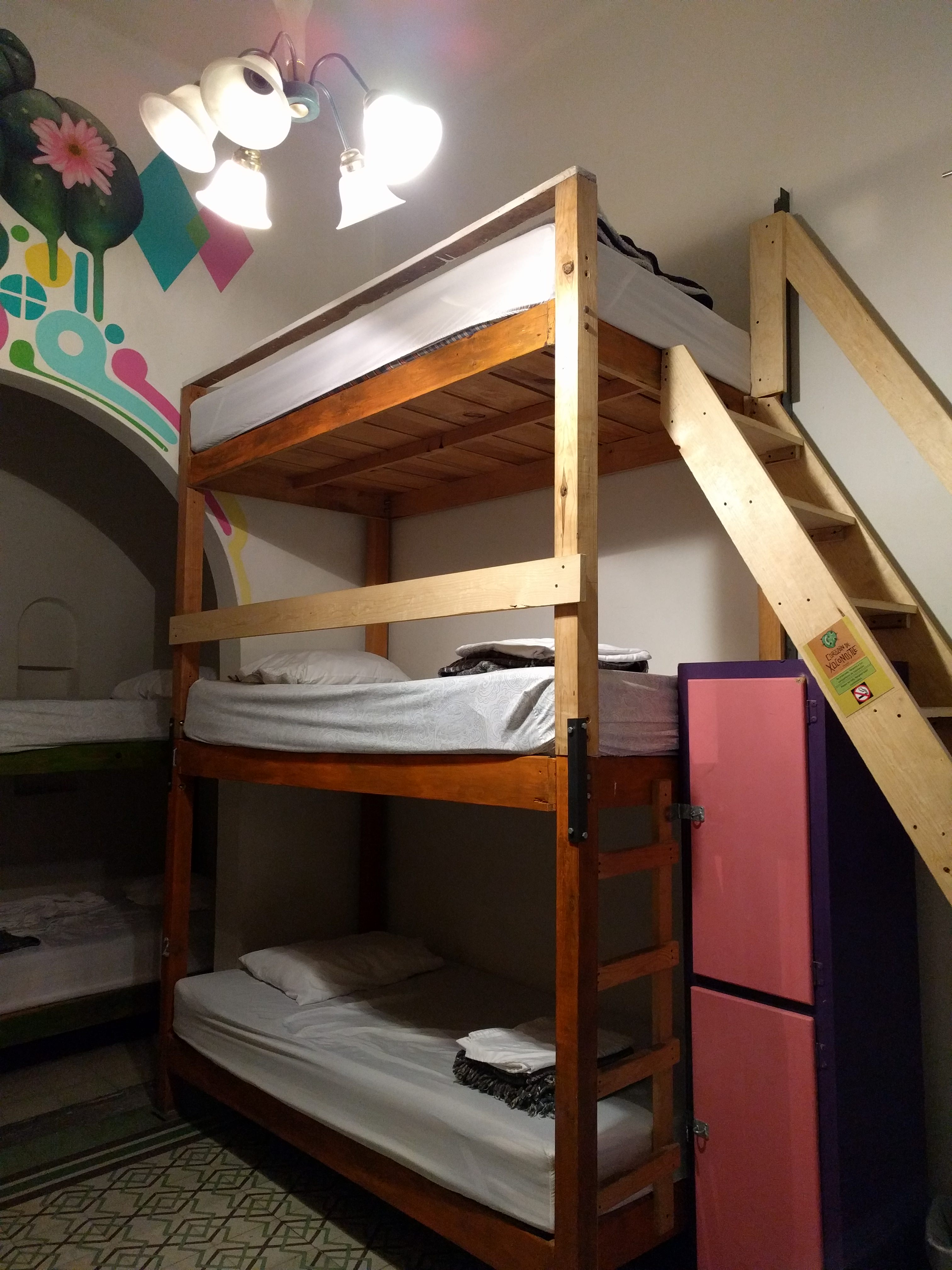 I was a bit tired from my long day riding, so I did not venture out in the evening. This ended up being a great decision, since I got to have a wonderful evening in the hostel. 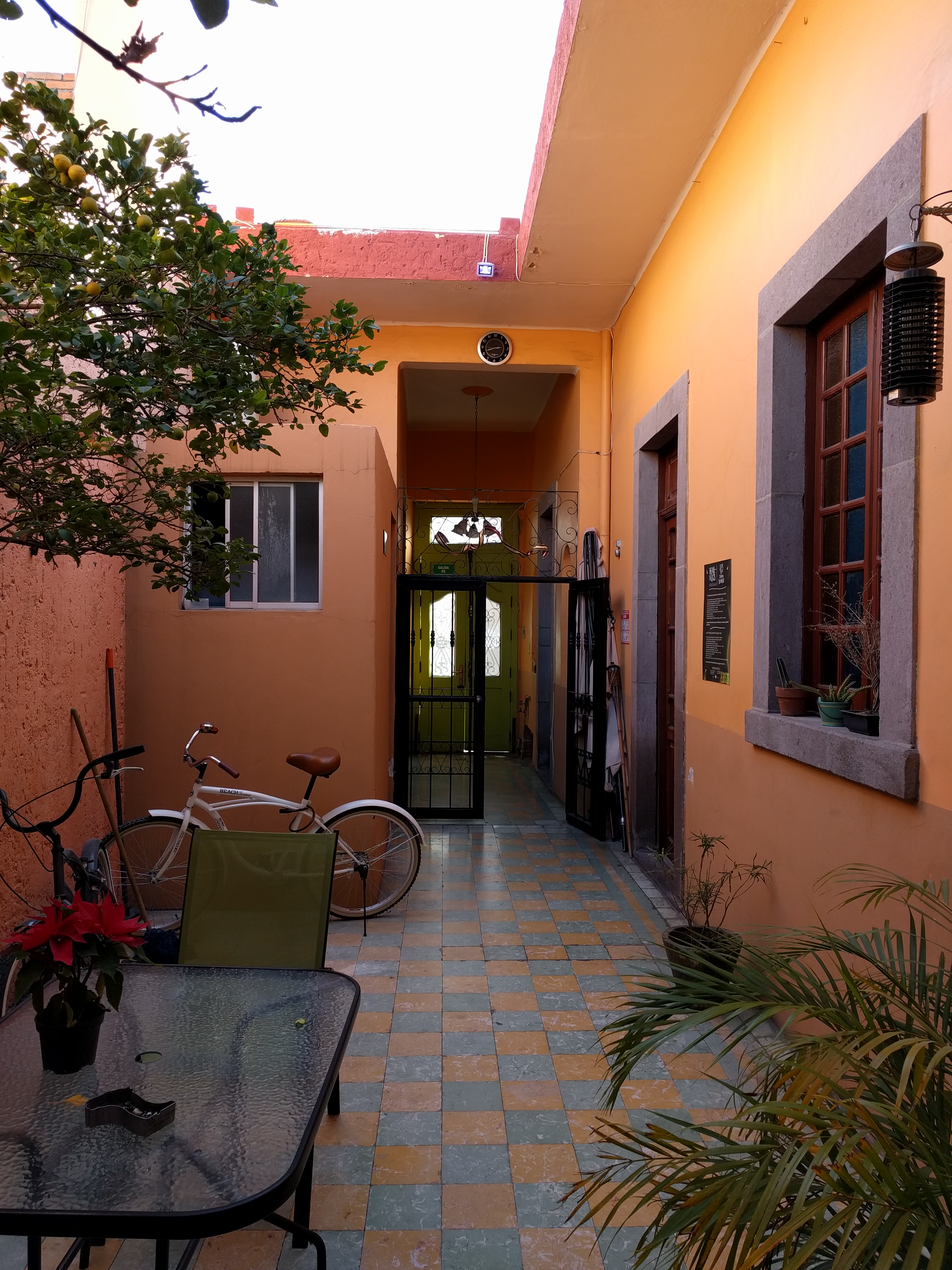 First up, I met a guy named Carlos. He is a web developer from the state of Sonora (just south of Arizona). He lived in the US for a few years so his English is perfect. We probably chatted for 2-3 hours about lots of different topics. I came away with a much better understanding about some Mexico-specific things.

When people ask where I am from, I had normally been responding with “Nebraska” then explaining where it is. Part of this is that I generally identify more as a citizen of my state than as a citizen of my country (I don’t think this is uncommon in the US). The other part is that there is really no good demonym for people from the United States. “American” (or “Americano”) could mean anybody from Alaska to Argentina. “Estadounidense” (literally “State United-ian”) is the most common term in Latin America, but it is a tongue-twister and still not very specific. I’m currently in a country called The United States of Mexico.

All that said, Carlos thought that introducing myself with my state may come off as being a bit egotistical. This means that I will need to work on my pronunciation of “Estadounidense.” 🙂

I also asked him about the geographical designation of Mexico, whether they consider themselves as being North or Central American. He said that they prefer to group themselves with North America, to “be one of the good guys.” This was good to know, since I had been grouping Mexico in with Central America.

We talked about the use of the formal case in Spanish, something that can be difficult to grasp for English speakers. He taught me the term “rebuscado” which basically means that you are overusing the formal case. “Pedantic” might be the closest English translation.

I also learned the word “enchilado” which does not exist in English. It basically means that you have had too much spicy food, that you are “spiced out.” I really like this one.

He was so incredibly helpful. It is really important to me to be able to approach people in foreign countries with humility and consideration. Americans are maybe not always the best at this. The first few phrases that you use with someone can solidify their perception of you. Understanding the culture and conventions is vital.

We were joined later on in the conversation by Alejandra, who was still on staff, and Jorge, a cultural anthropologist who lives in San Luis Potosi. The conversation shifted back and forth between English and Spanish, which was really good practice for me. They were so kind and really made me feel welcome. 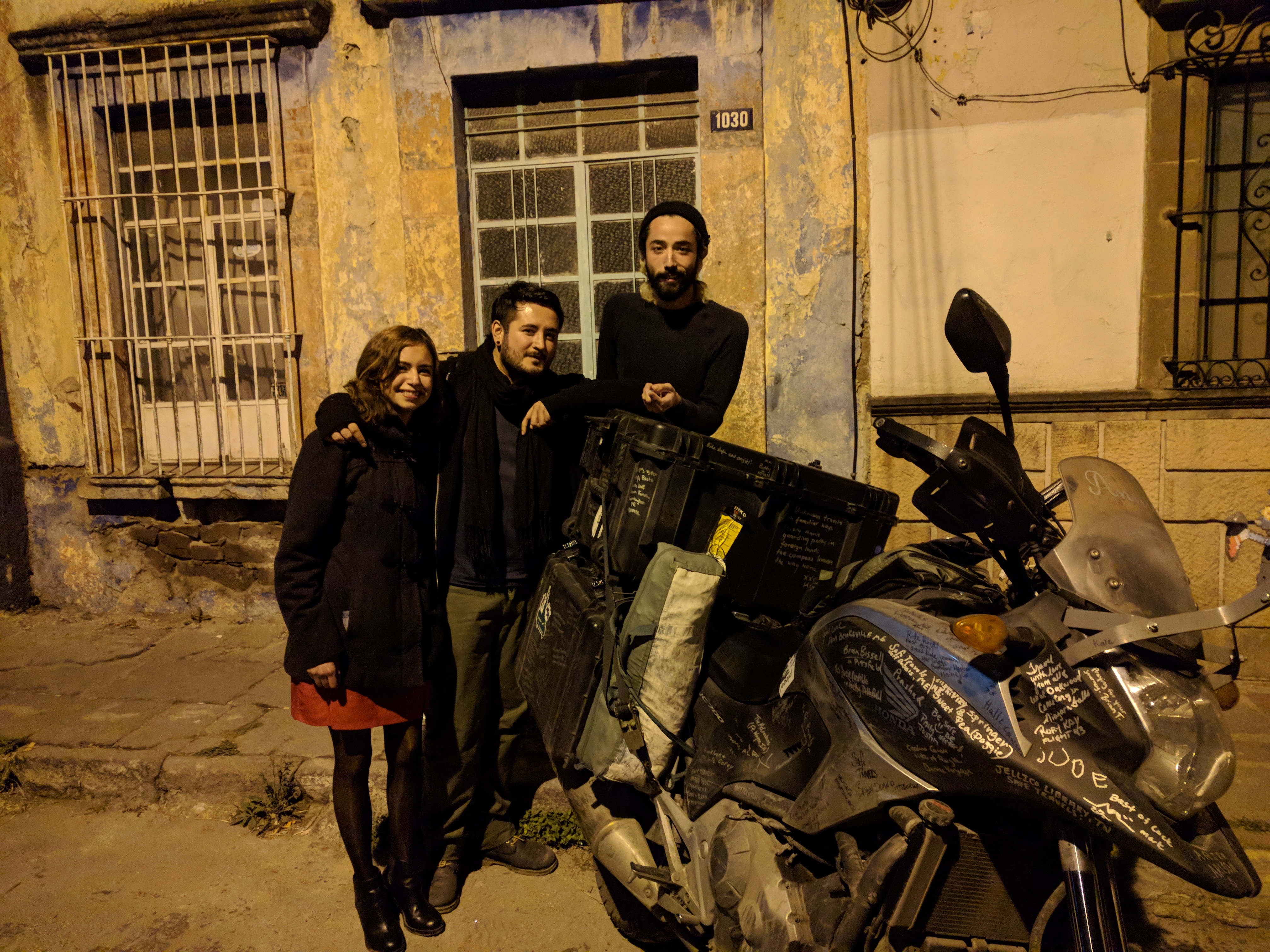 They gave Annie some nice tattoos too. The first few signers in Mexico have used English, so I encouraged them to write them in Spanish. Annie should be bilingual by the time this trip is over. The quote Jorge used connects well with the trip.

I slept in a bit before beginning to venture out to see San Luis. I was planning to stay a second night at the hostel. I’m planning to take it a bit slower, especially during this opening phase. Taking time to learn the language and culture is much more important than making physical progress at this point. Here is some of SLP: 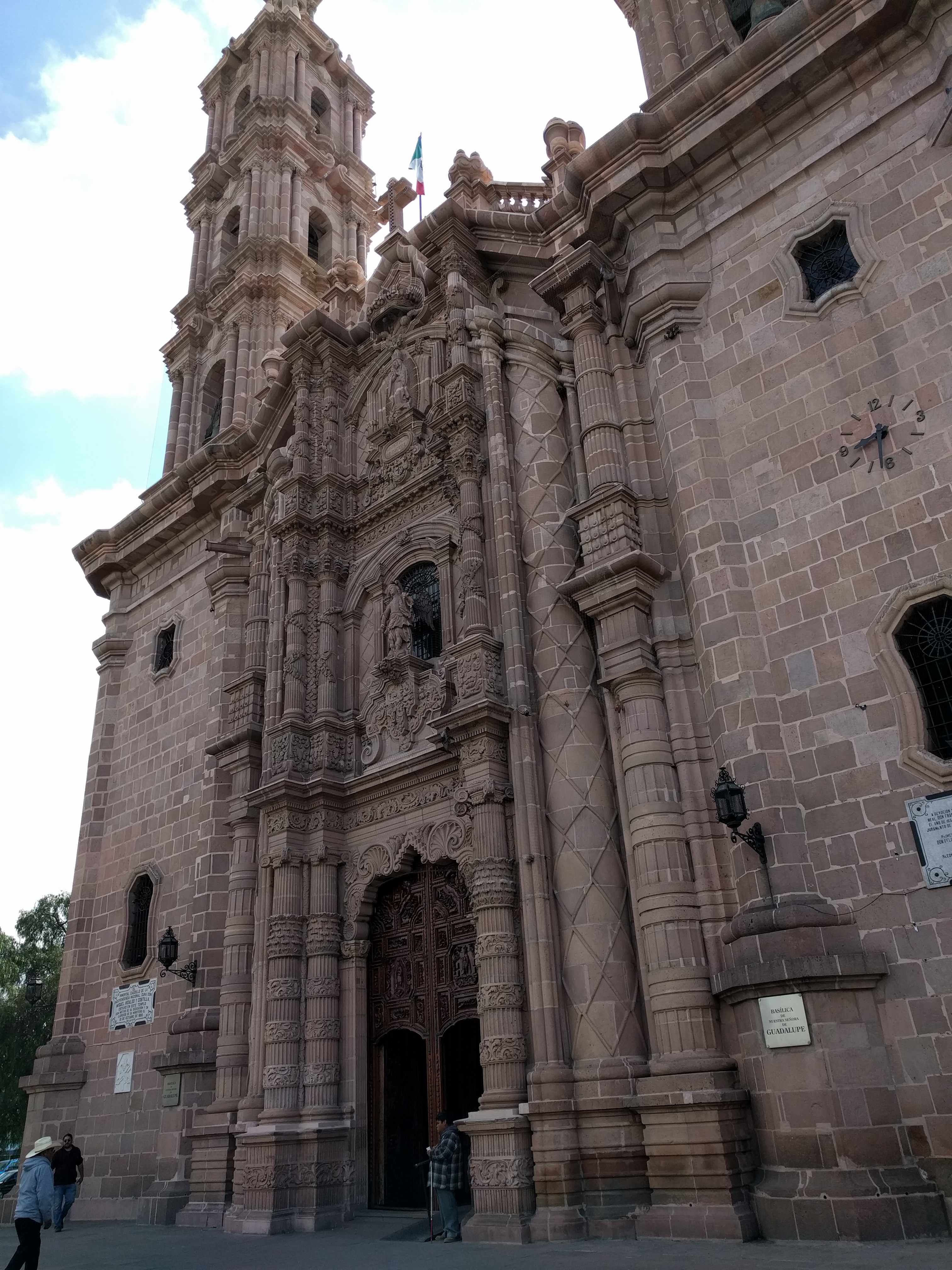 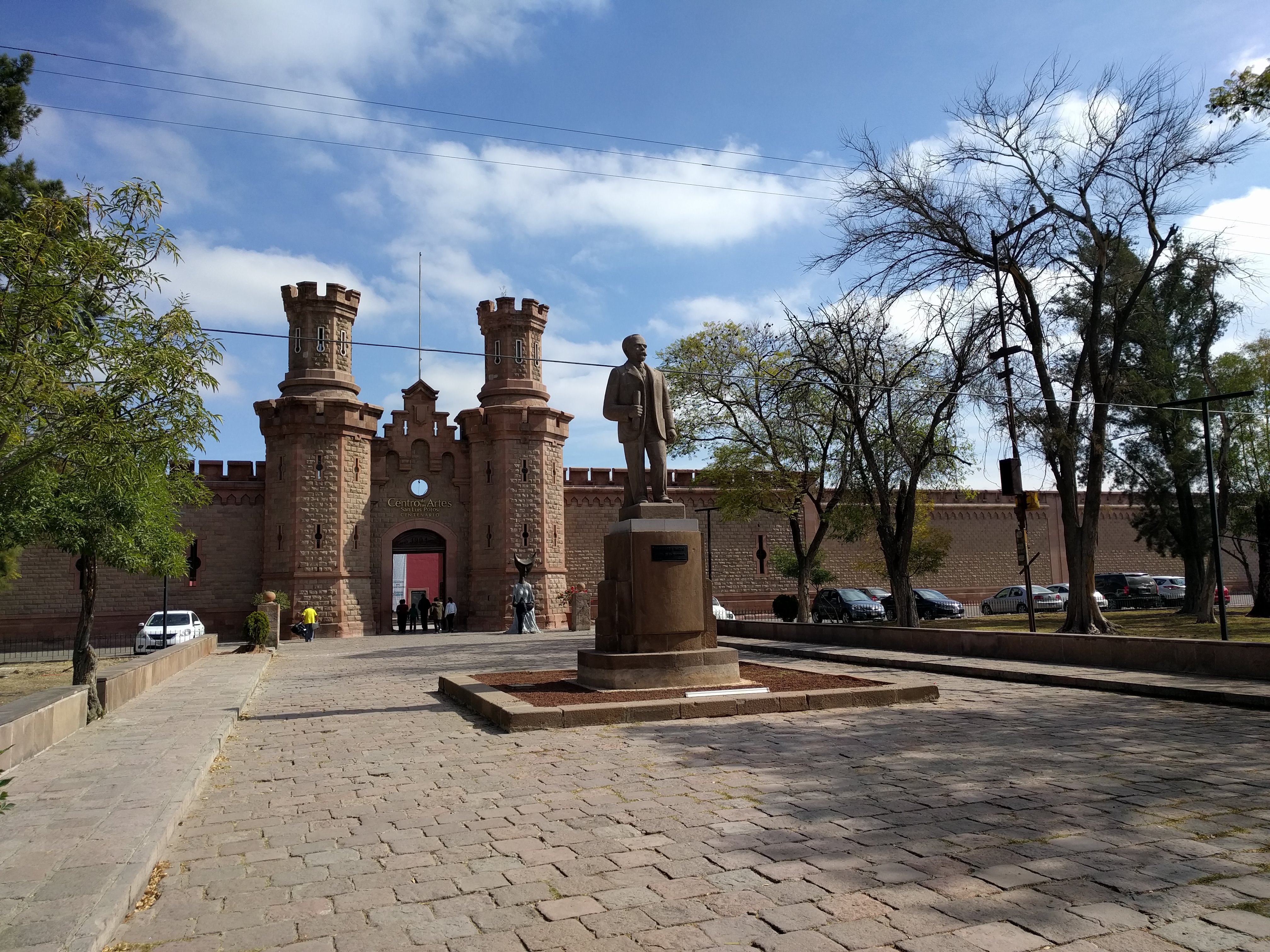 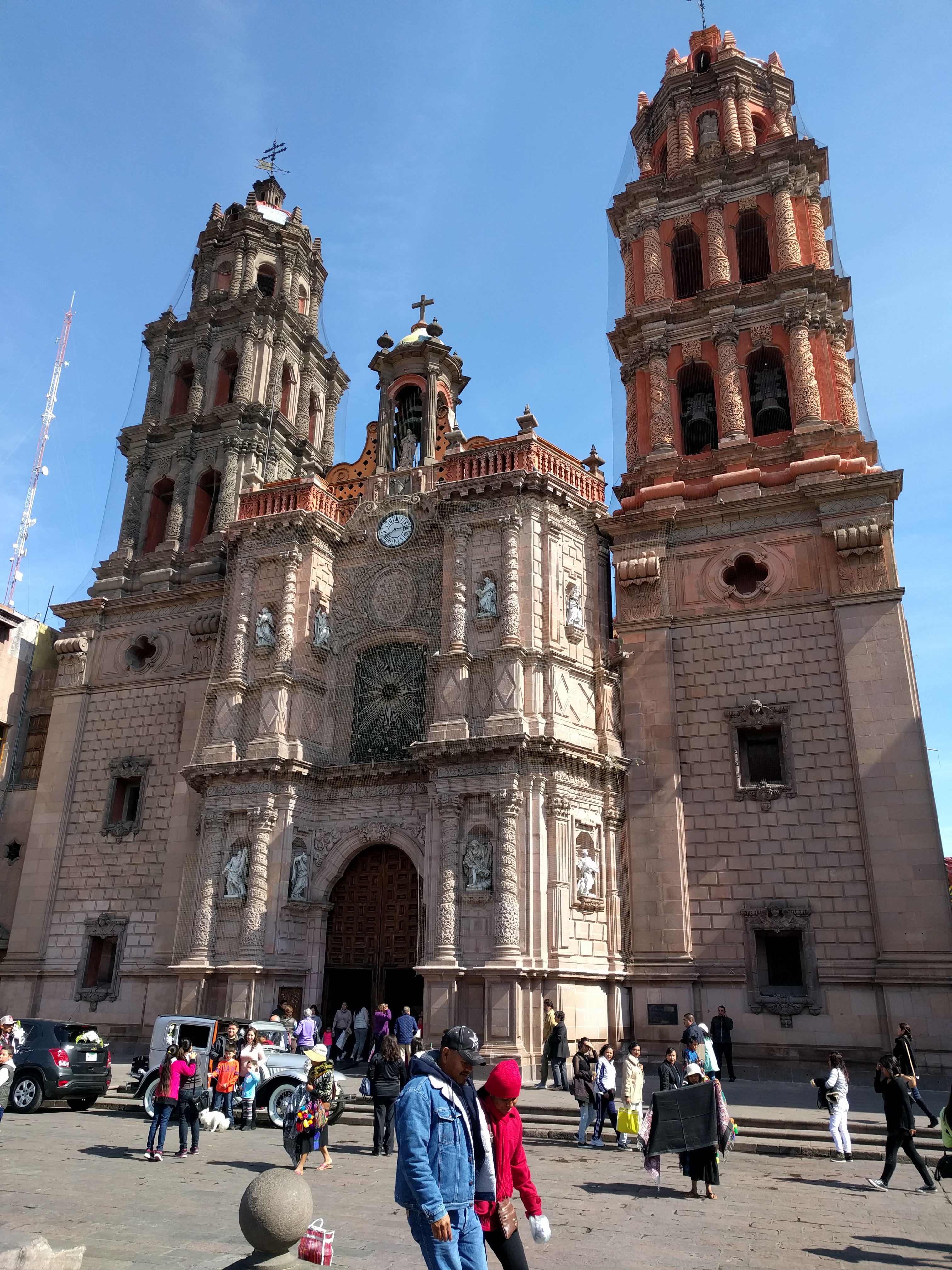 “Trade in your weapons for money.” 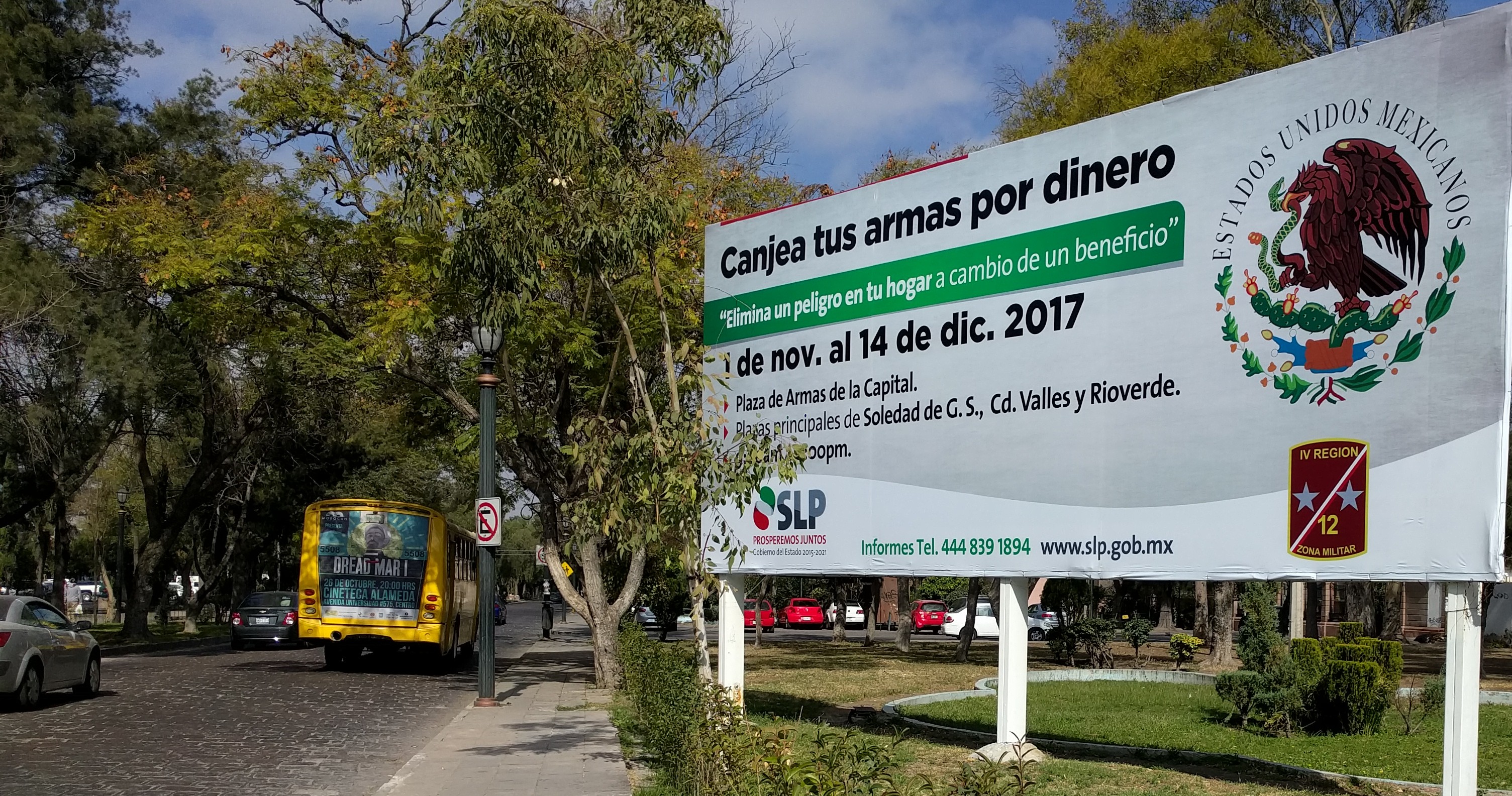 Though there were lots of nice things to see, I found myself frustrated with a couple things. One internal, one external.

On the internal side, I was still having a hard time adjusting to being in an unfamiliar place, culturally speaking. Probably the main reason for this was my struggles with the language. Multiple times I would see some street vendor with food or something else interesting, but I would avoid asking about it because I wouldn’t know the exact words to use.

But this is not really an issue of language, is it? It’s more an issue of pride and laziness, things that cause me much more worry. Breaking through this barrier will be vital both for my development and for my enjoyment. I’m not sure why I’m struggling with this.

Another frustration was that I was having issues with my phone. I am using a service called Google Fi, which basically allows for regular phone use across any borders. It has been blinking out sporadically, not connecting to any mobile network. I probably spent a good two hours on the phone with support and trying other things.

Ok, back to happy thoughts!

I did get quite a bit done this day and met some more friendly people, so I can’t say it was a bad day.

I got another great night of sleep. I think there was only one other person in the dorm room, which made it easy to rest.

A couple and their daughter, whom I had met briefly the previous night, were at the table eating breakfast so I asked if I could join them. We spoke no English during the conversation, which was really good practice. I hope I made some sense.

The parents, Yaer and Sandra, told me that their daughter, Fer, had written out a whole page of questions that she wanted to ask me. She was a little shy with the gringo sitting across from her this morning though. They were wonderful people and it was really nice to get to know them. I was just going to eat something simple, but they shared some freshly cooked eggs and some other things. 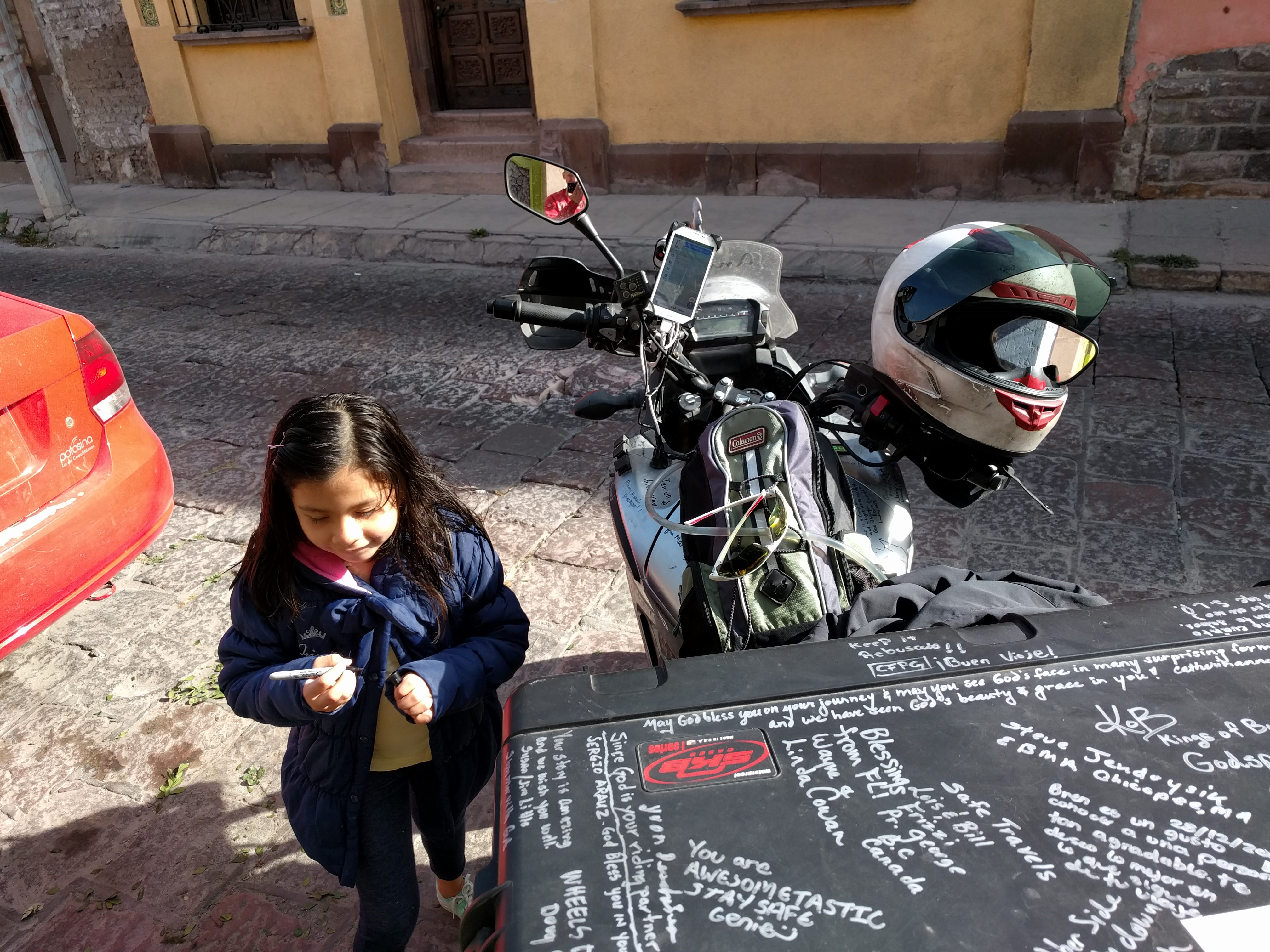 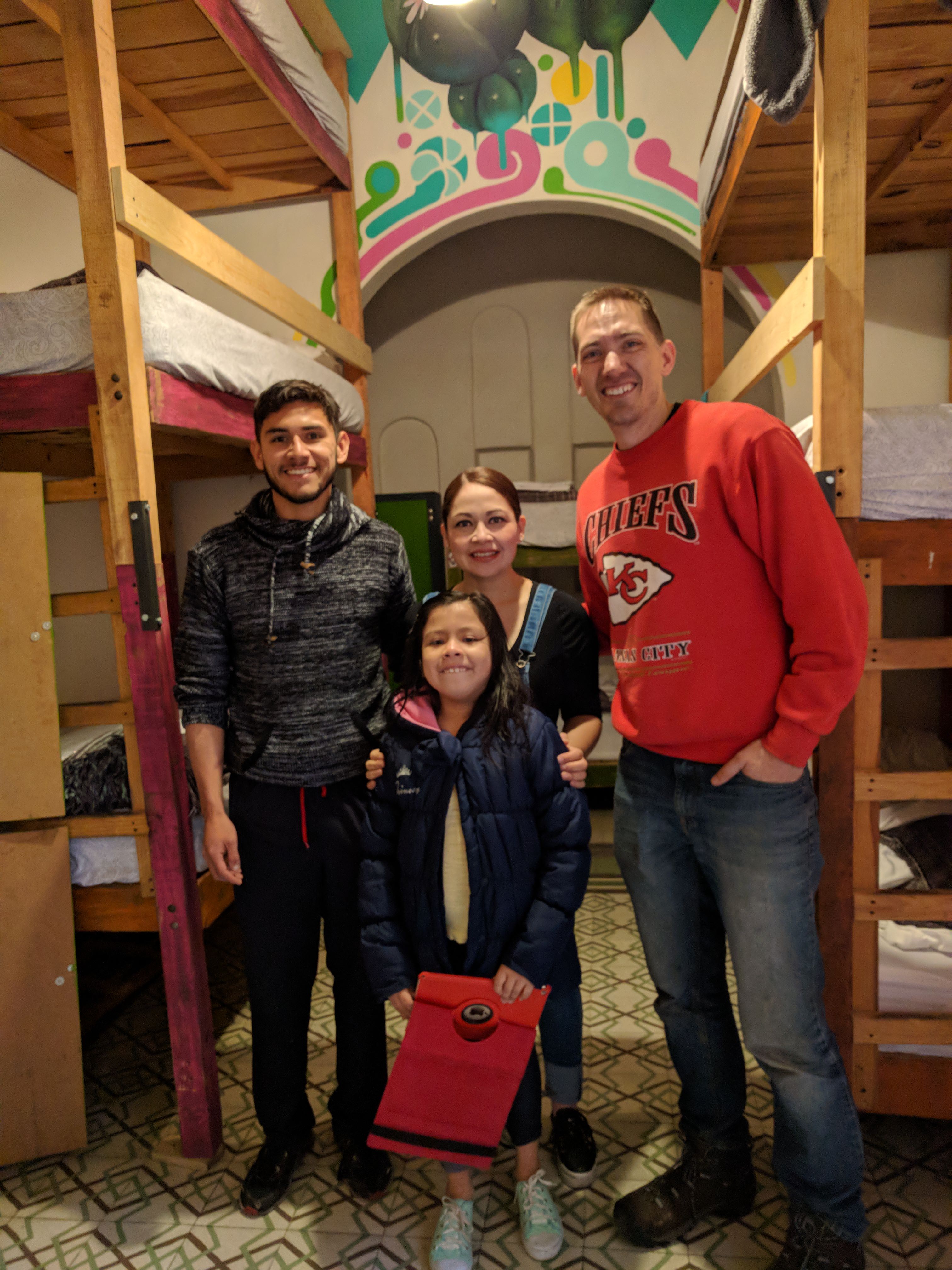 I never really considered myself as looking like a stereotypical American until I started taking pictures standing next to Mexican people. 🙂

Oh, I almost forgot my favorite thing about the hostel: They have a bathroom which is designed exclusively for skinny people! 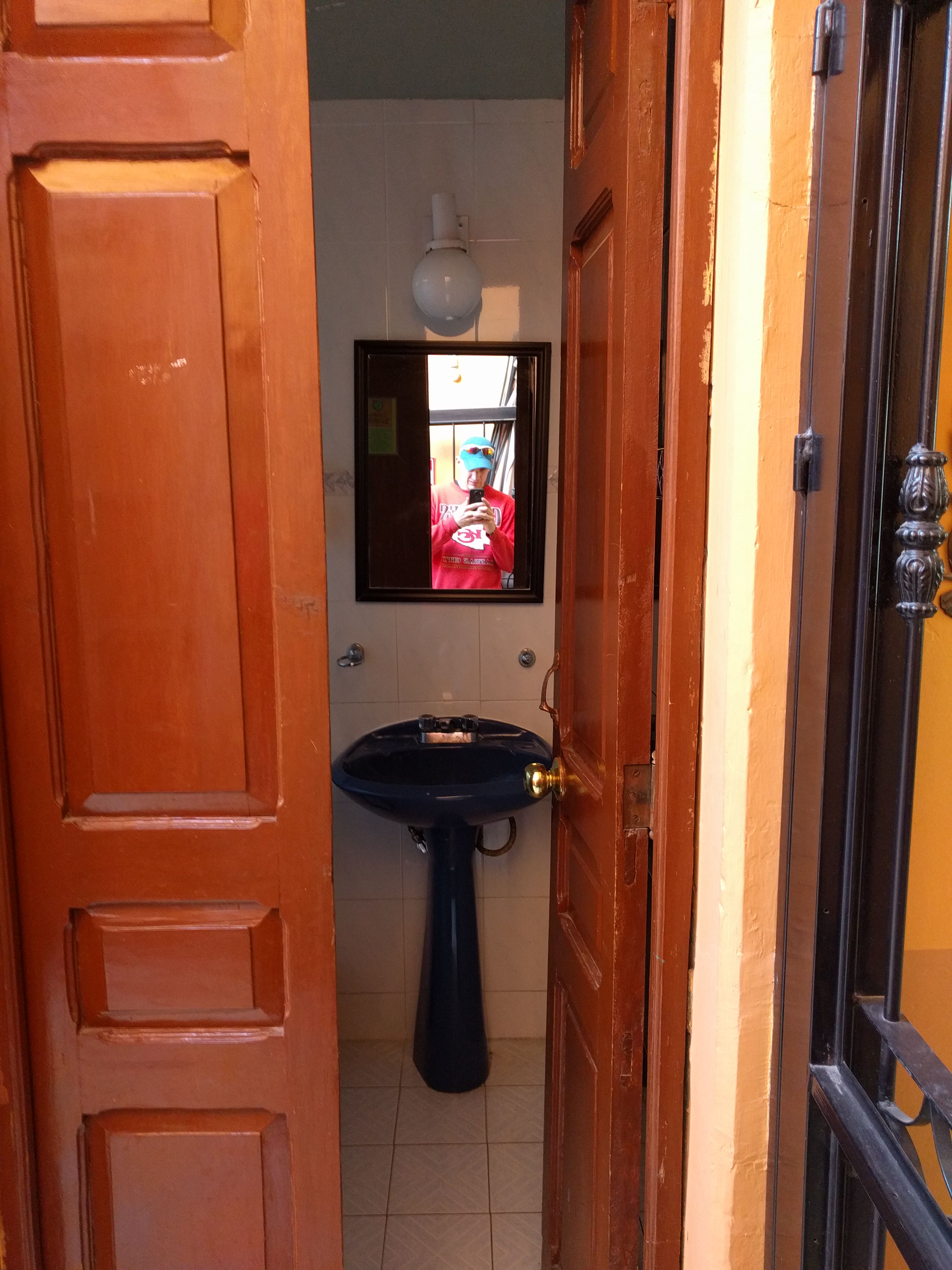 …that other door actually does open, it just took me awhile to figure it out.

We’re getting there. Little by little. Each day I tell myself, “Remember, you will never speak Spanish as poorly as you do today.” I hope my ability to communicate and connect will just expand as I go south. Thanks for coming with me!

17 thoughts on “Cruise into the Corazón”