Our journey continues at Lake Atilan, one of the most picturesque places in the world. We do some paddling, some dancing and succeed in not getting run over by a tuk-tuk.

This big hole in the ground was formed 84,000 years ago. After a huge eruption, the ground collapsed into the emptied magma chamber. Over time this depression filled with water to create the lake.

The lake is dotted with little towns on its banks, each one with a distinct personality. Most of them have preserved many aspects from Mayan culture, from the language to dress to crafts.

In recent history the lake has become quite a tourist hot-spot, both for its beauty and its culture. Our visit would not disappoint.

My destination was a town on the SW side of the lake, San Pedro La Laguna. 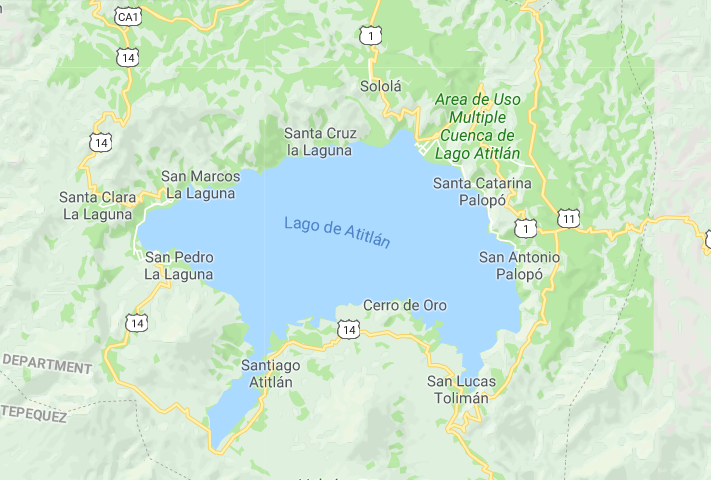 …but getting there was going to be a bit of an issue. I made it to Santa Clara, but then my maps indicated that I should take a back way into San Pedro. 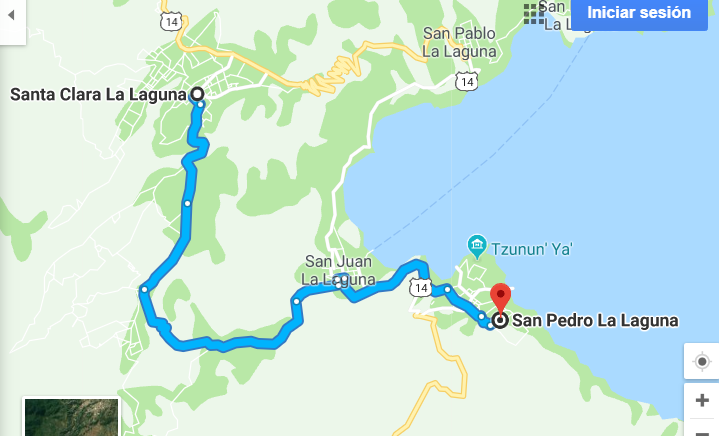 The roads were interesting. Most of the steep switchback parts were paved with the kind of stones that you would use to make a decorative path in your garden. Meanwhile, the flat parts were mostly just dust.

These lake side towns are difficult to access since the descent to the lake is so steep. Furthermore, there have been a number of robberies on the road that runs along the south side of the lake. I wanted to be sure to avoid that stretch.

I continued to endeavor to get myself as lost as possible. Finally, when I thought I was on the right road. An oncoming tuk-tuk (the little three wheeled contraptions) driver waved me down and set me straight. He said that this way into San Pedro was closed and that I would need to go through San Pablo instead. He was super helpful.

I returned the way I came and routed towards San Pablo. As the road began to switchback in its steep descent, I saw the lake for the first time. There was a little path leading up a hill, just wide enough for a motorcycle. 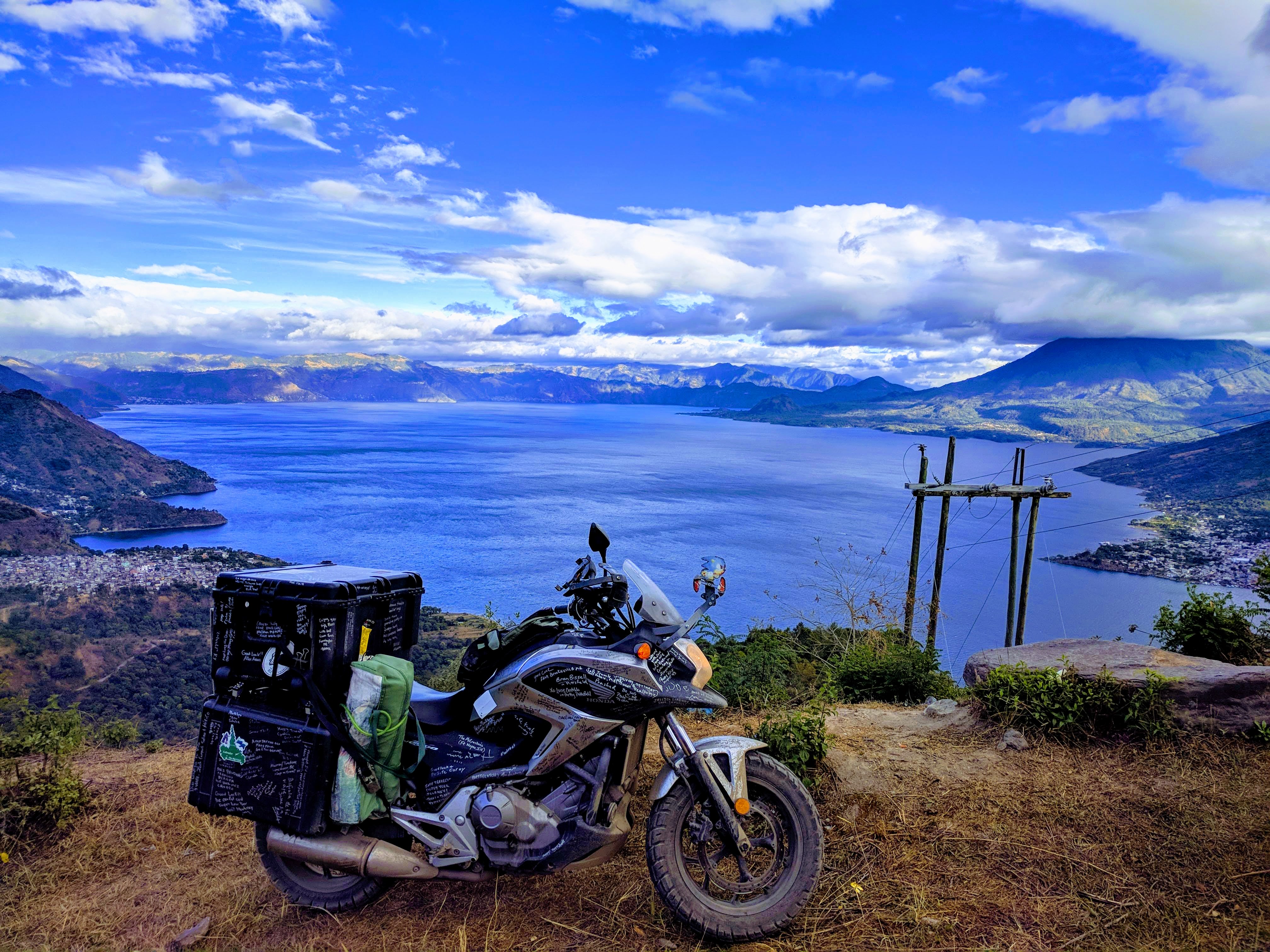 In the following picture, San Pedro is the town on the left. I still had nearly an hour of riding to get there. 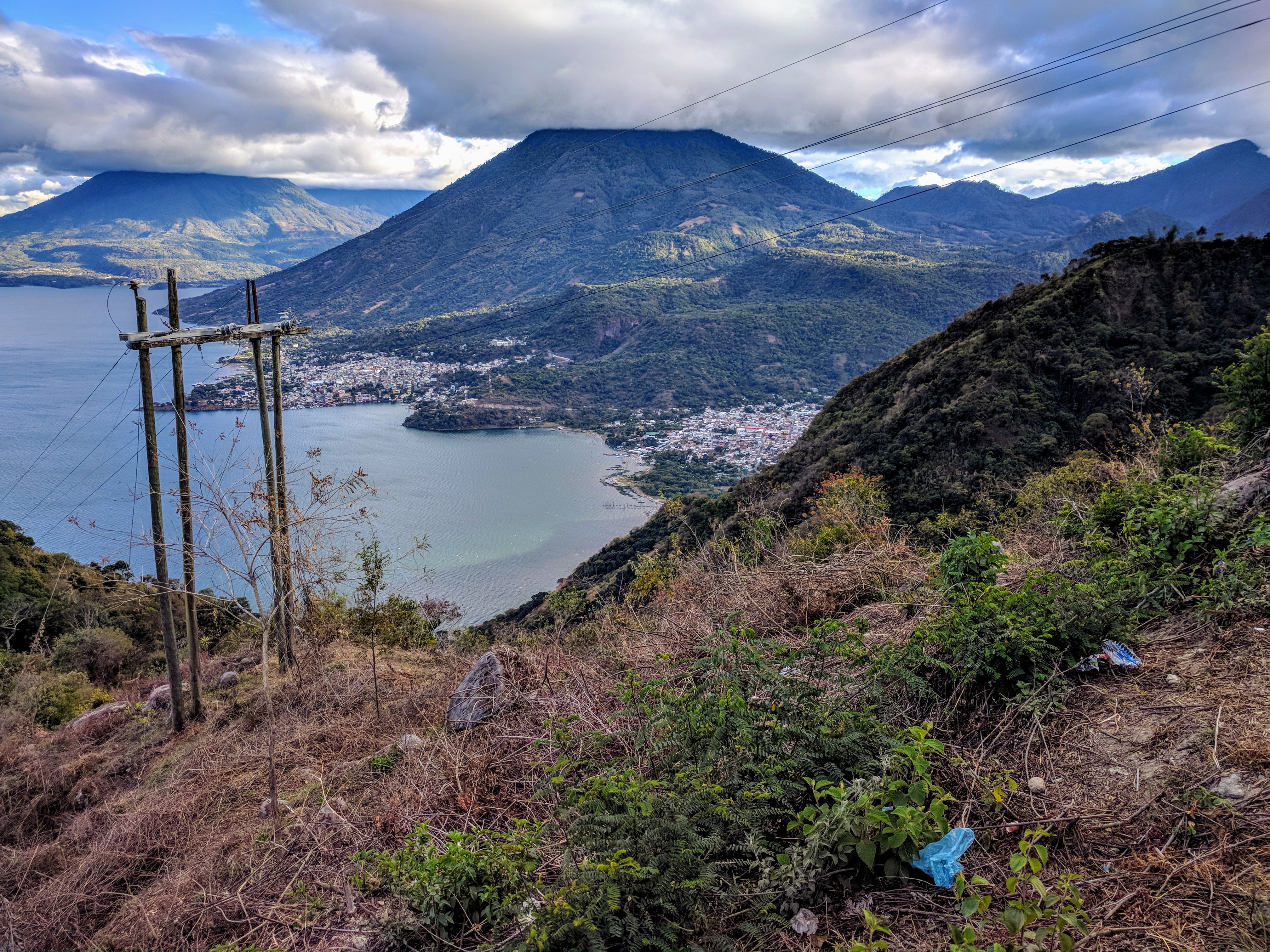 I didn’t really get lost after this, but it was still quite a long ride to San Pedro. Eventually I reached my destination and began winding through the narrow streets.

I didn’t have a reservation, but there are plenty of options in this town. I settled on a place called Hospedaje Lolita, a three story hostel with parking behind a secured gate. It was about $6/night. The eponymous owner got me set up and made me feel very welcome.

I hit it off right away with my roommate, Chris. He is from Liverpool, England. He flew over and bought a cheap, 150cc Chinese bike (a Yumbo) on which he is touring around Central America. 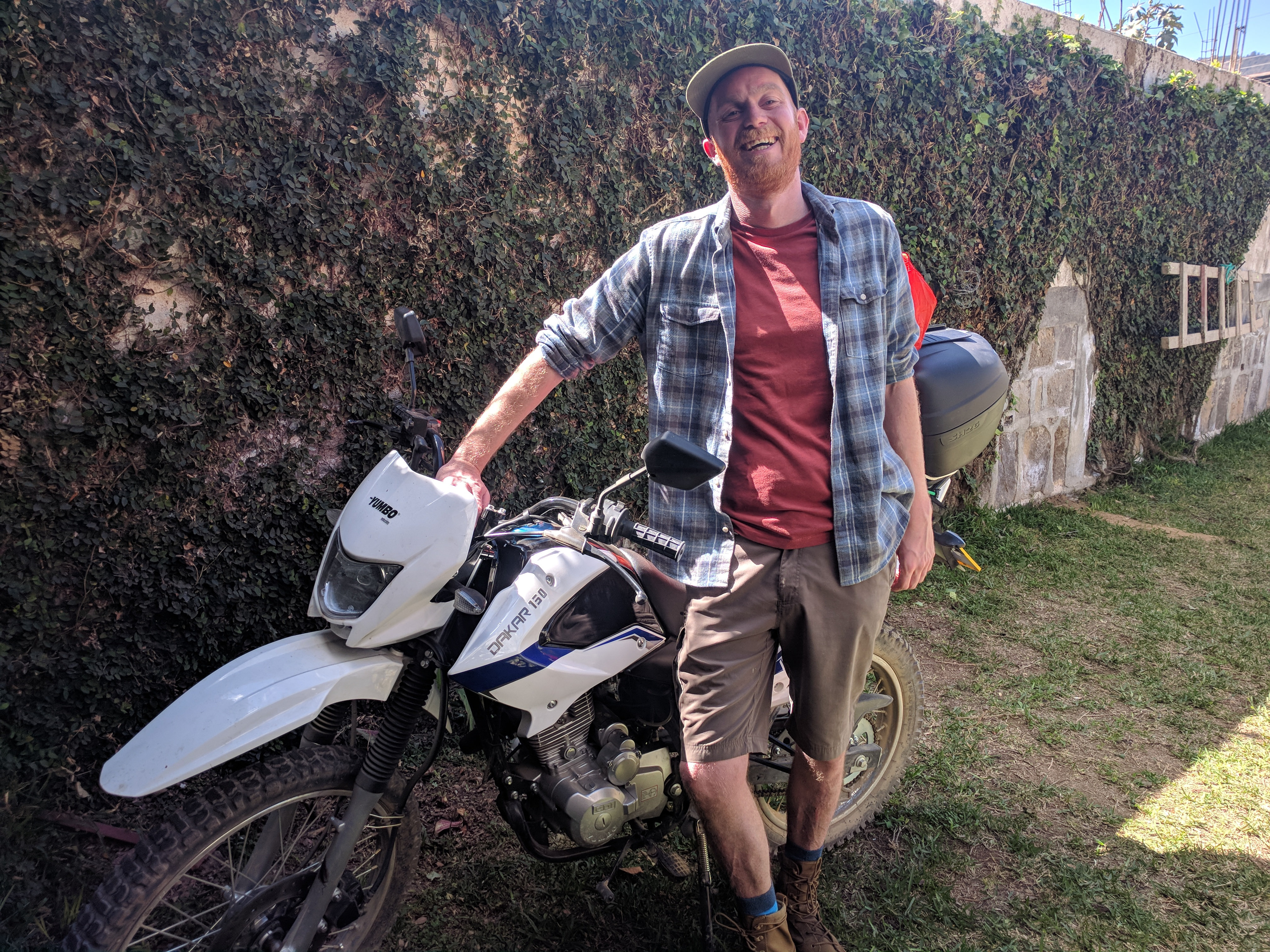 We had lots to talk about. 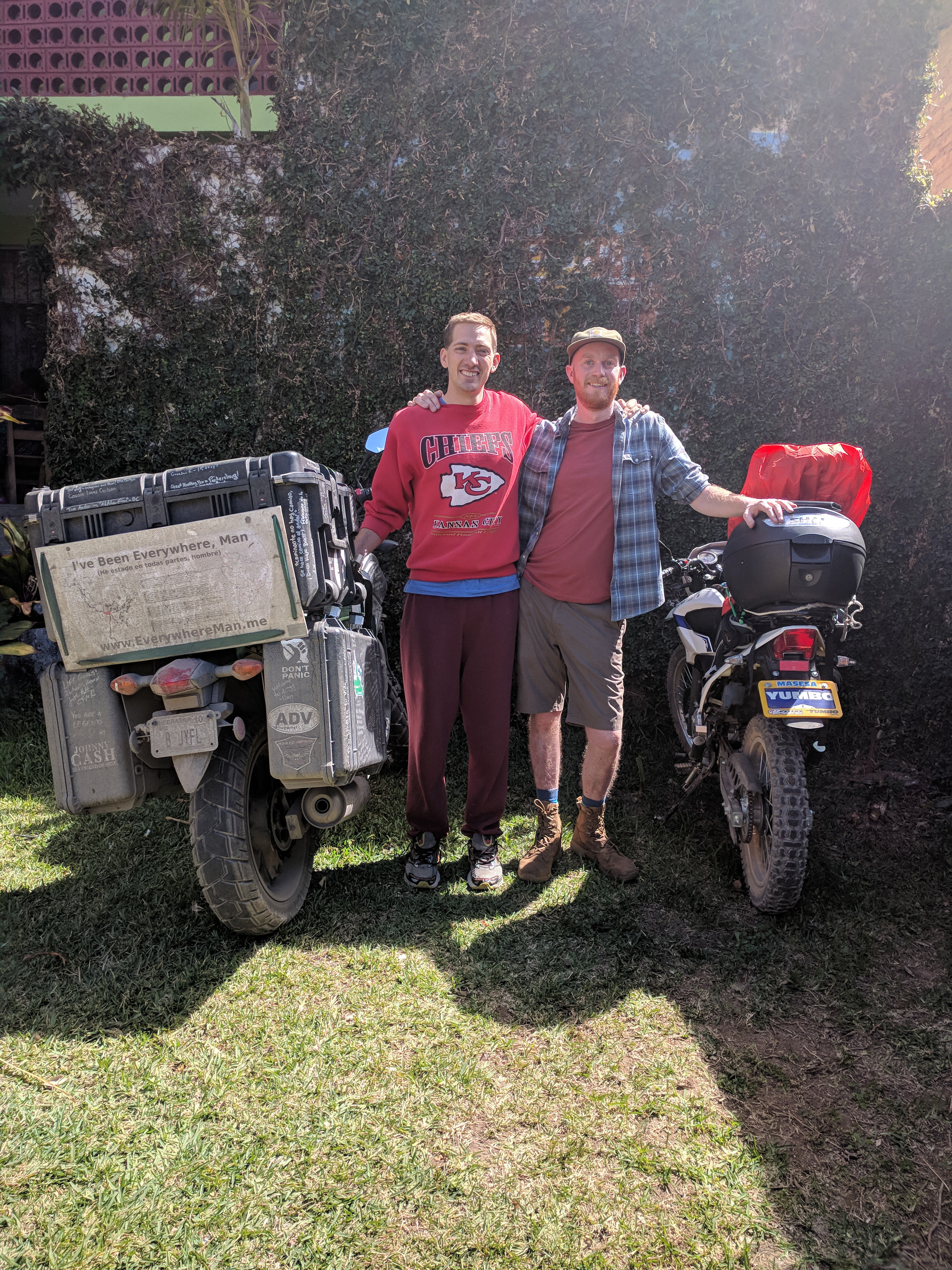 I was tired from the long day on the bike and decided to stay in for the evening. It was hard to believe that I had begun the day in Mexico. The scenery changes quickly down here.

I spent the morning getting some work done. It was a really windy day, which caused interruptions in the wifi. Yes, you should feel very sorry for me.

One activity that I really wanted to do was to hike to the top of the San Pedro volcano. It is about an 8 hour hike, so I did not feel that I could quite manage with my left leg still healing. Next trip! I also wanted to rent a kayak, but this day was just a bit too windy.

I did walk around town a bit during the day. It is so difficult to describe this place. There are some things that are so innate, like they haven’t changed for a millennium. But there are also ample signs that this place is evolving rapidly, with the influx of tourism to the area. 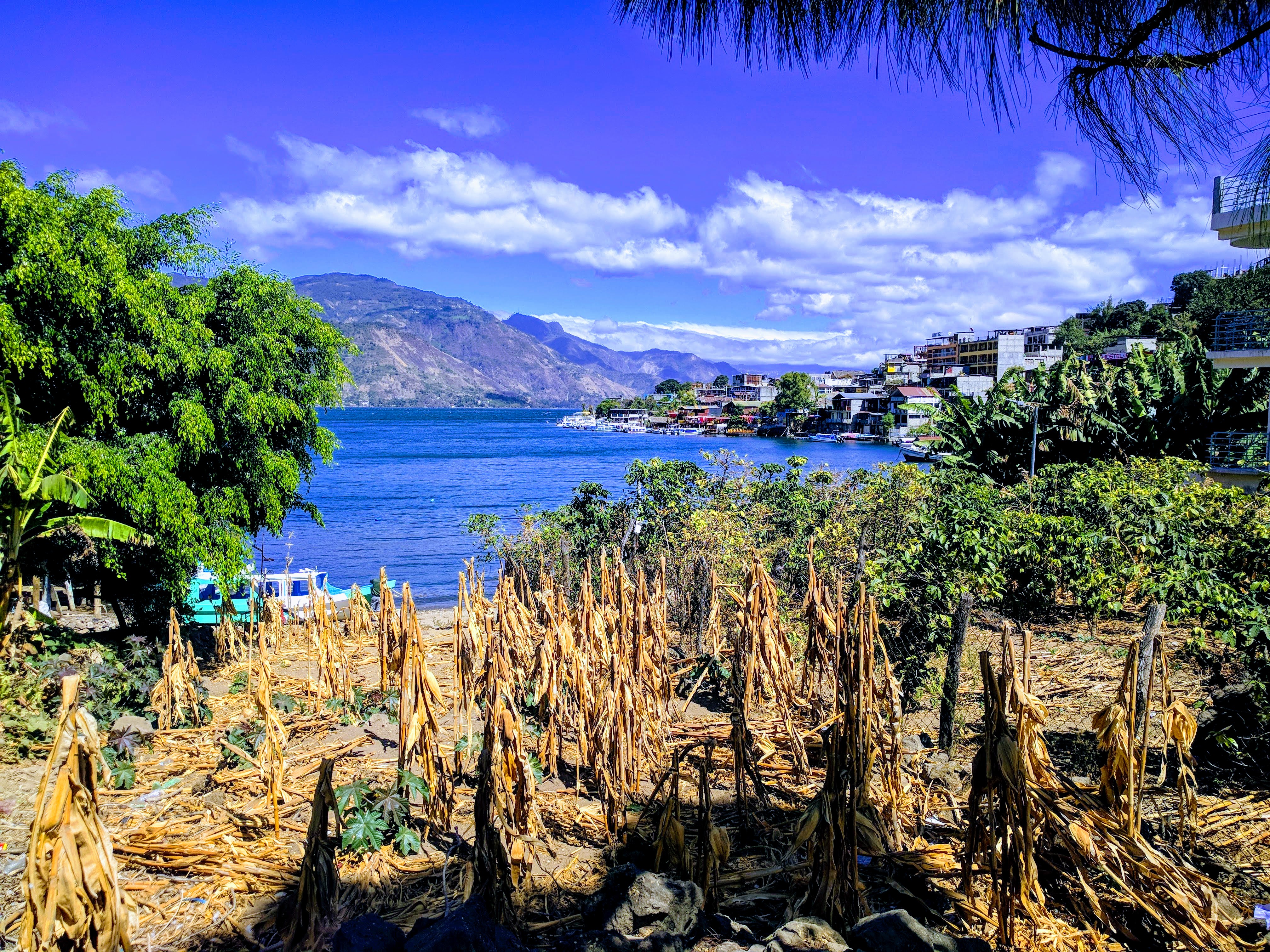 Lake views are seldom when walking along the roads. The town is built on such a steep hill that access to the lake is reserved to just a few spots. 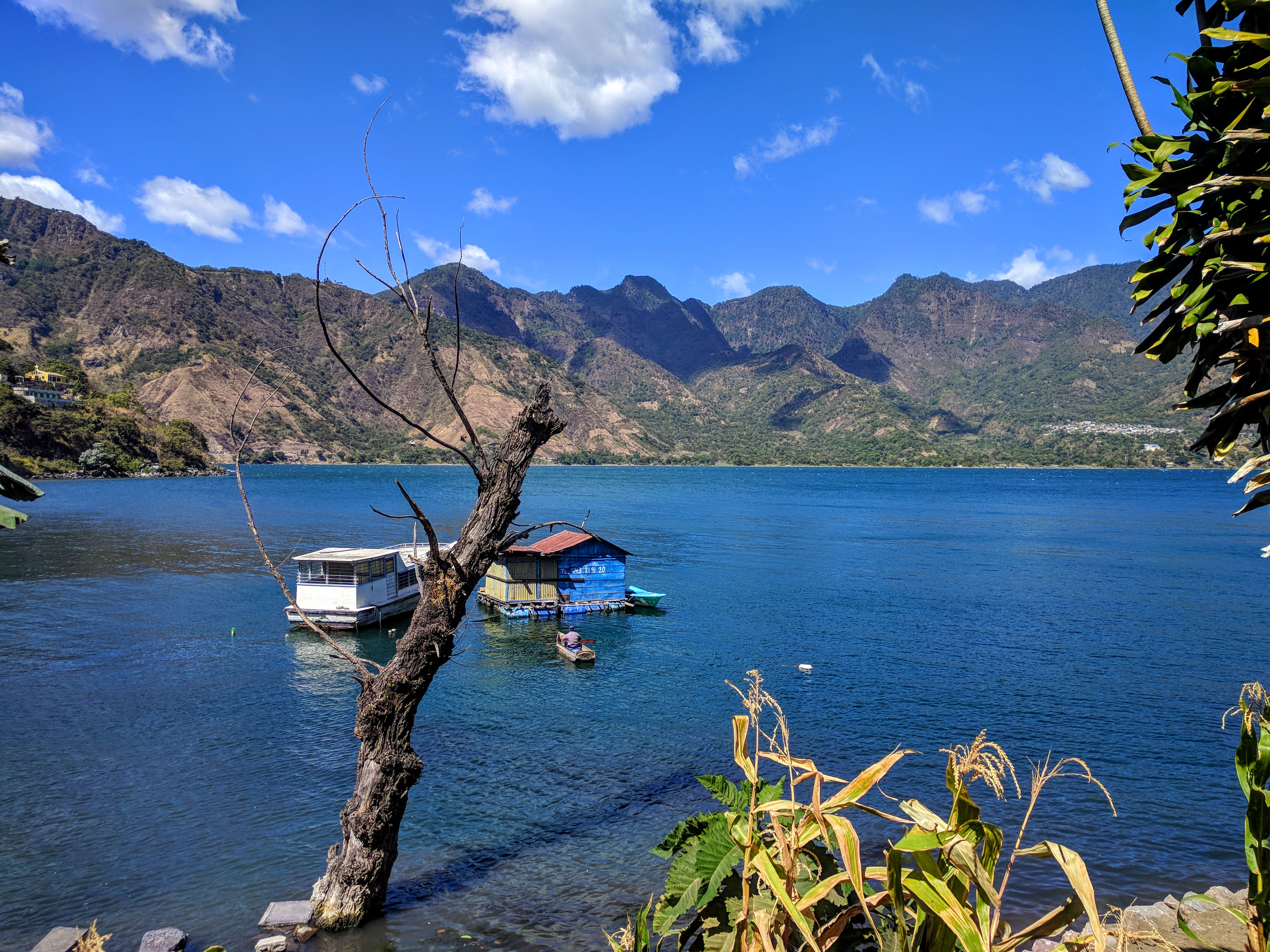 In the evening, I explored the area “up the hill,” further from the lake. The road along the lake is sort of main street for tourists. The one further up the hill is main street for the locals. Food is much cheaper up here and I much preferred the feel of this area. 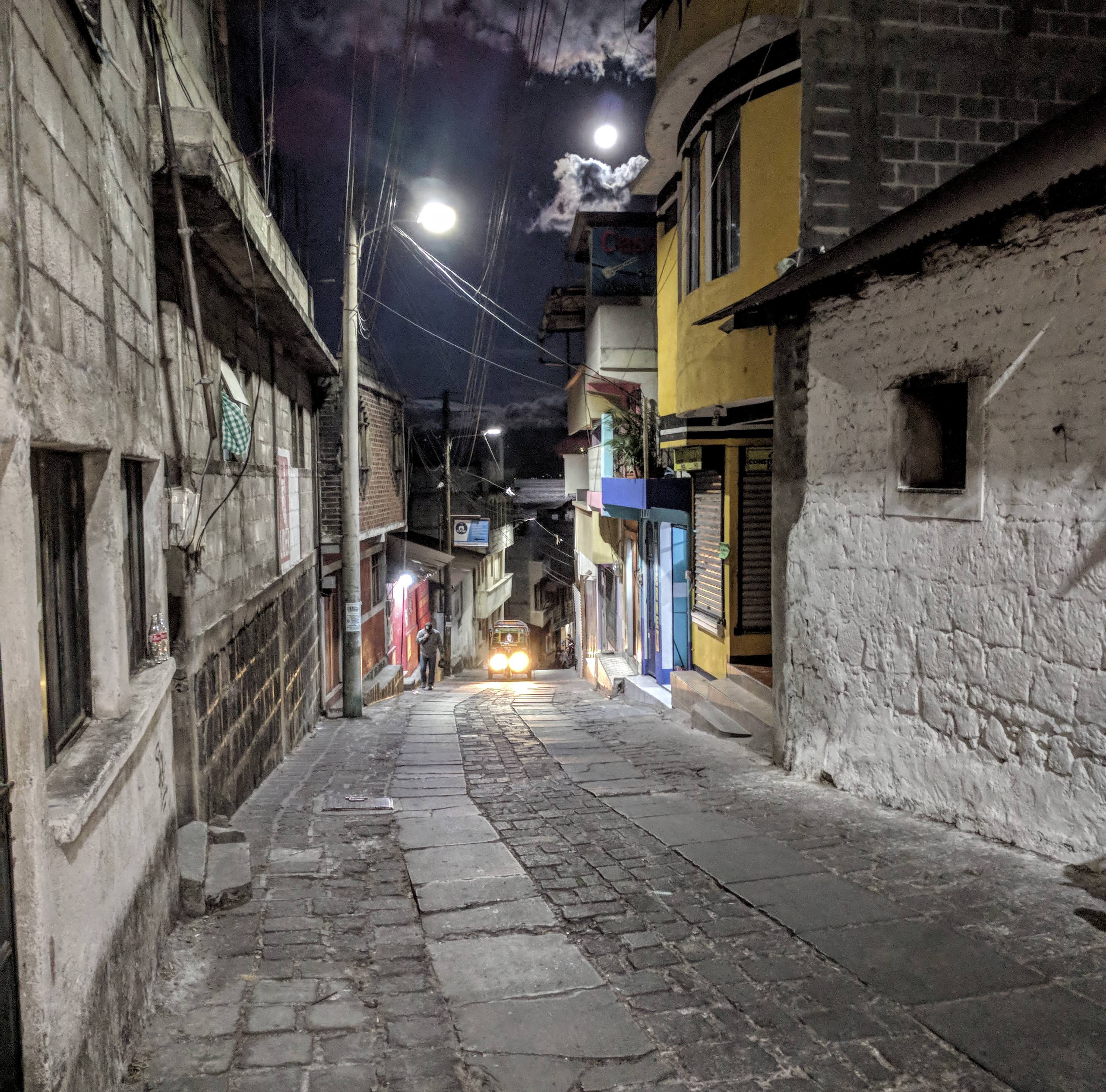 At a little comedor (family kitchen), I got a nice $2 plate of food for which they tried to undercharge me. I insisted on overpaying. 🙂 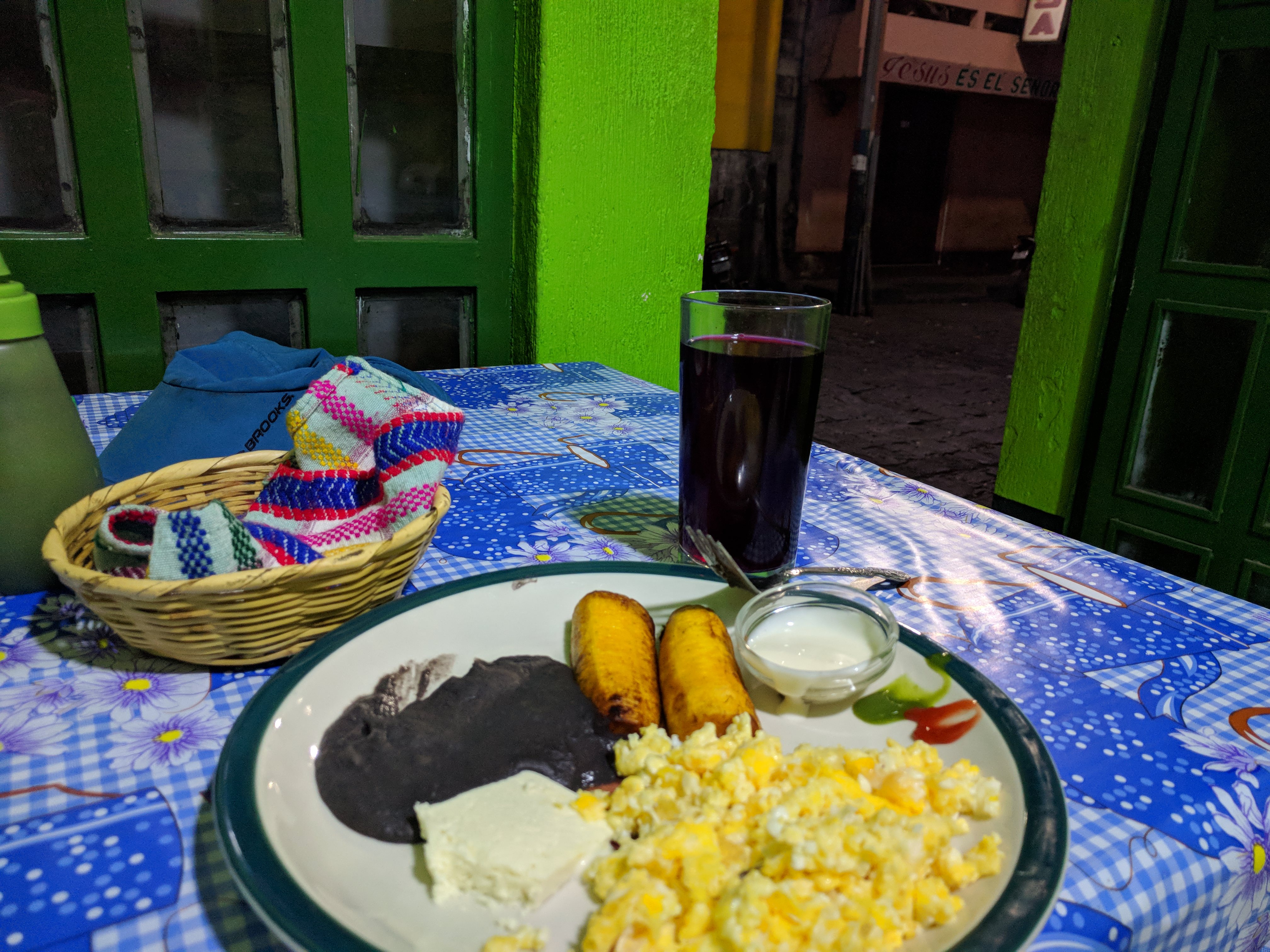 Walking back to the hostel, I heard some loud music playing. At first I thought it was just another loud gringo party, but as I got closer I realized that it was crazy Jesus music. I walked by the door to an improvised church building, then stopped and weighed my options. I knew that entering the service could be an incredibly awkward experience, especially if it was in the native language, but I eventually beat back my insecurities and headed for the open door.

The scene inside was pretty wild. Videos with the lyrics displayed, playing on Windows Media Player, were projected onto a screen. A couple of ladies in bright traditional dress were leading the singing. The room was small, probably containing about 30-40 people in three rows of plastic chairs. Everyone was dancing, some were waving flags, others had brought their tambourines from home.

There appeared to be a spot in the front row, so I made my way up there and a couple of guys danced a spot open for me. People seemed a little surprised to see me, but also seemed happy to have this strange, pasty giant in their presence (the people here are really short). It was one of the few times of my life when it would actually be more awkward to not dance.

The pastor was fairly easy to understand and I probably comprehended about 50% of what he said. Sometimes he would say a few phrases in the native language (Tz’utujil, I believe), oftentimes when he was making a joke. It was a nice service and I met lots of great people. The only picture I took was of the whiteboard that the pastor used for his sermon. 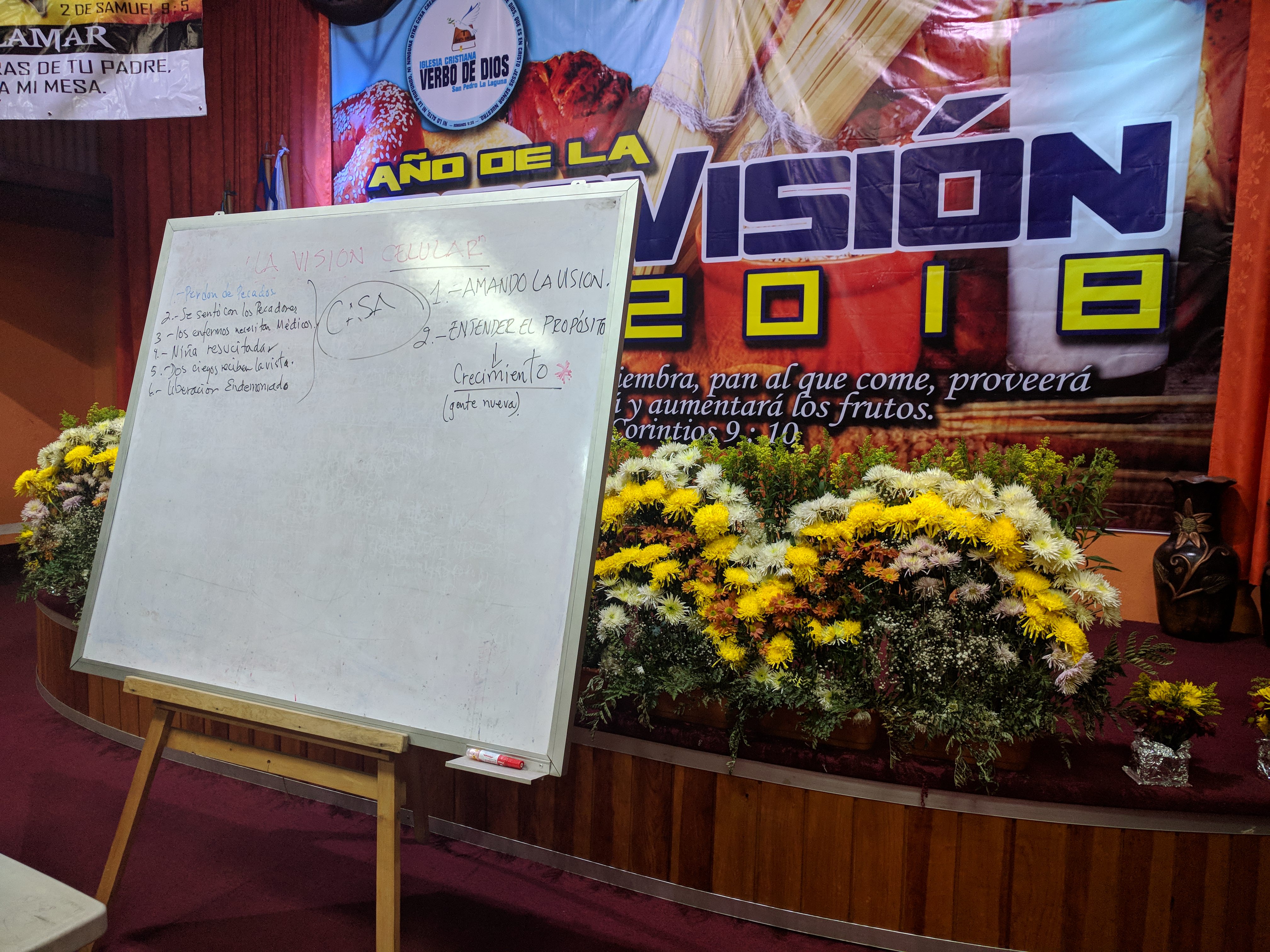 I had the room at the hostel all to myself for the evening. 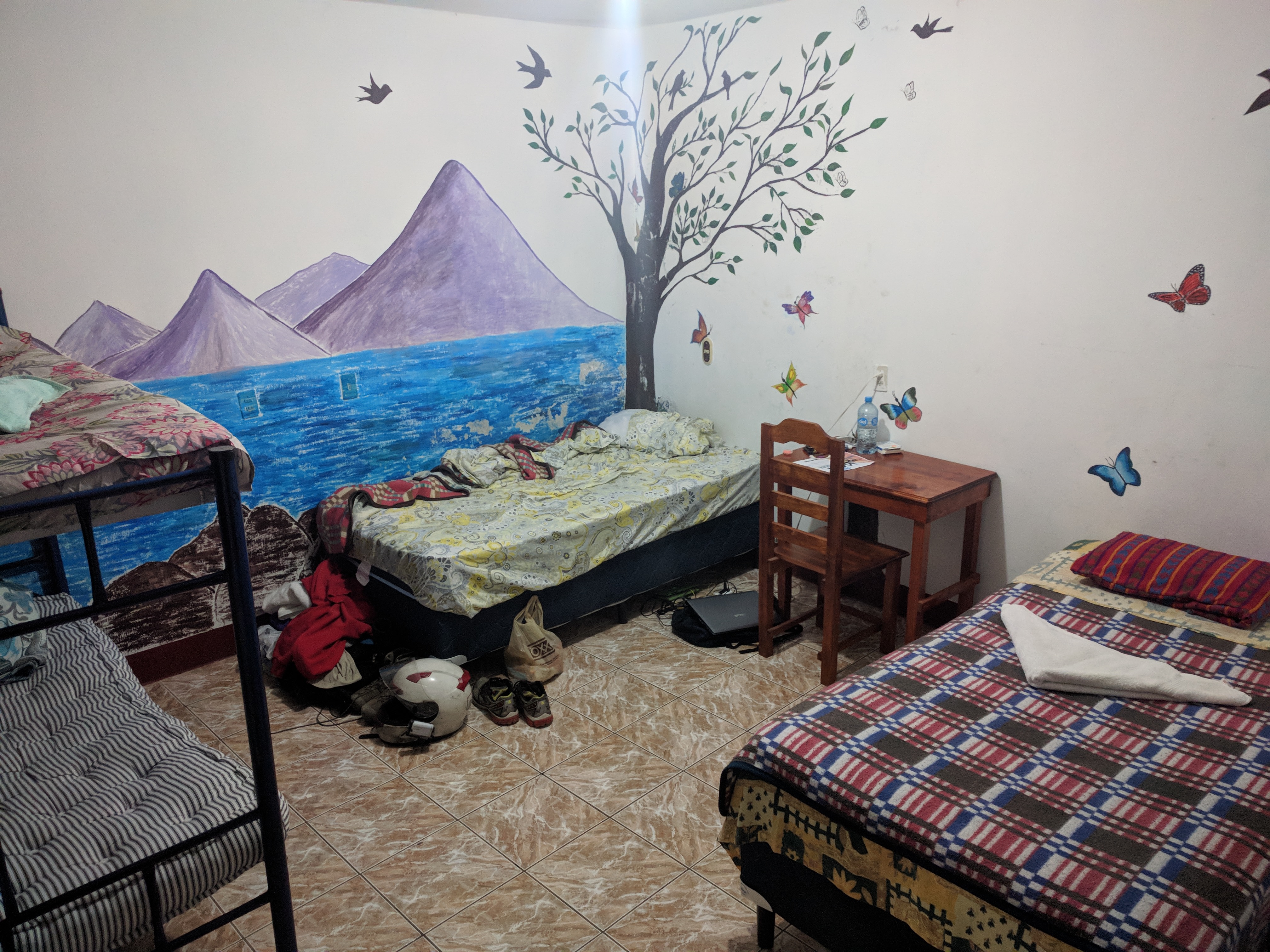 The previous day I’d mentioned to my host, Lolita, that I wanted to rent a kayak. She asked me how much I wanted to pay and told me that she could accompany me to find one the next morning.

I followed her through some shortcuts that were not on my map until we arrived at a little space between two buildings which led down to the lake. 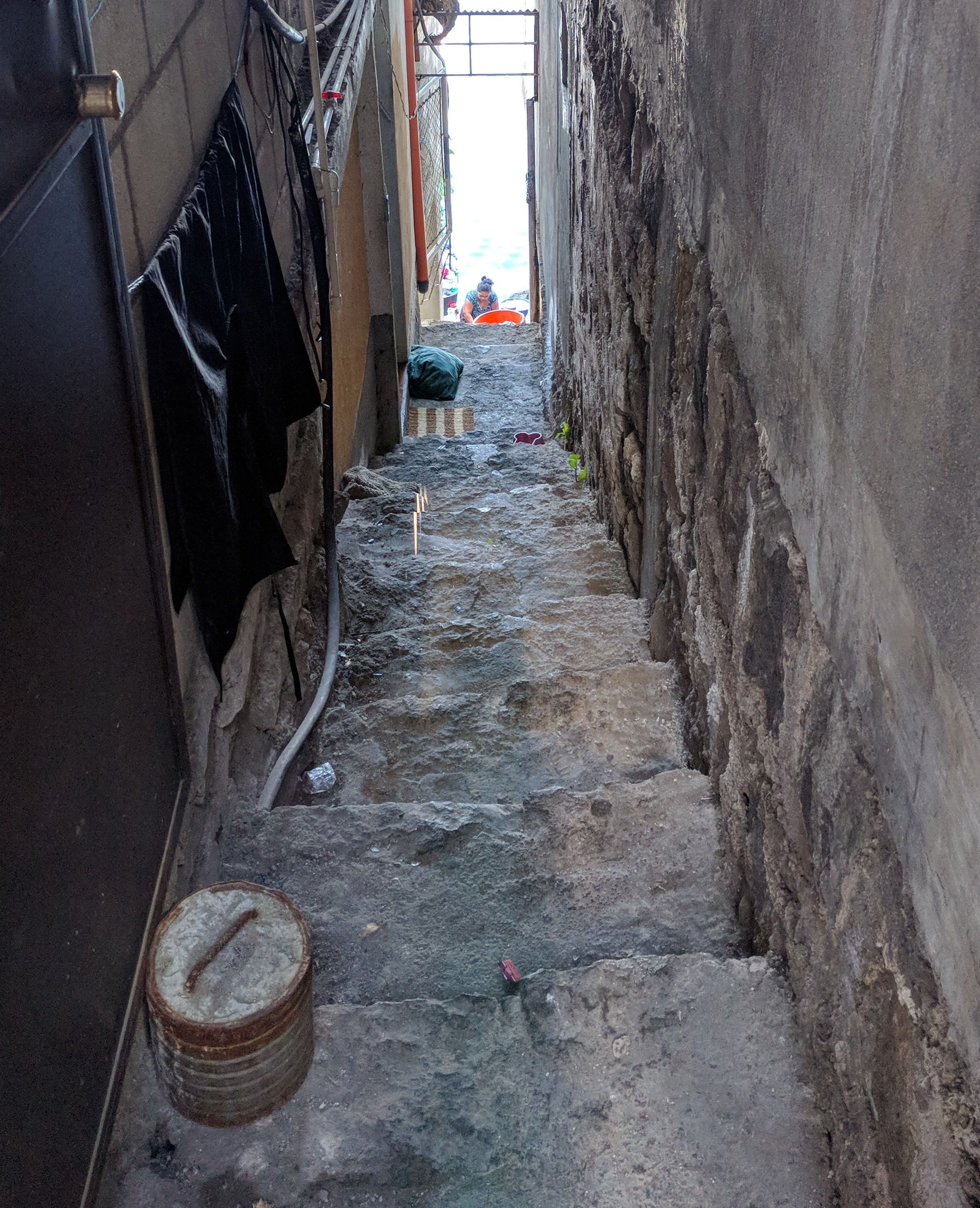 At the bottom there was an older gentleman on a wooden dock. Lolita talked with him in their Mayan language (which sounds really cool, by the way) and got me a good price: 15 quetzales (about $2). My ship awaits: 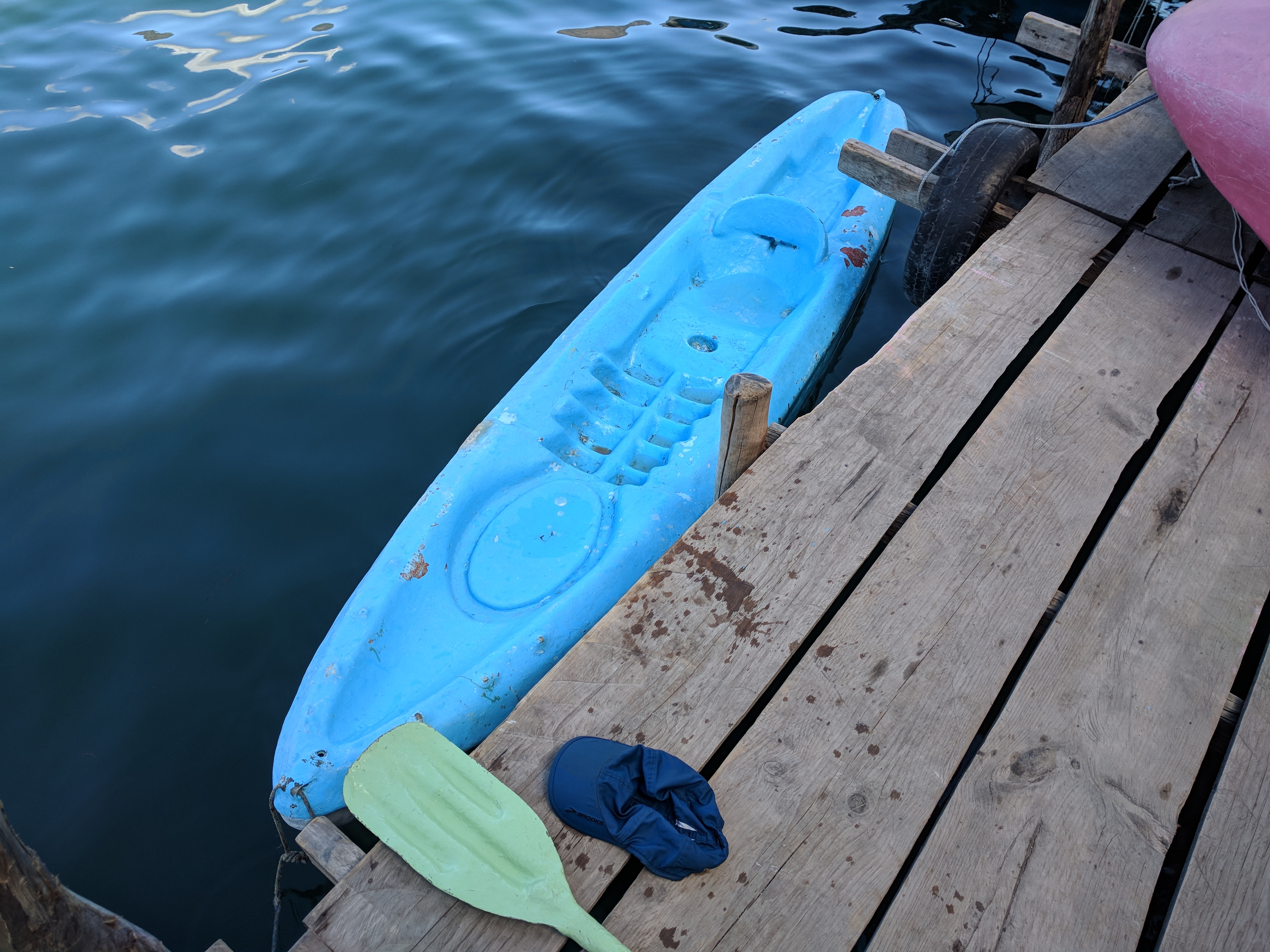 I planned to get a lot of media out on the water, but the wind was just too intense. It took most of my concentration to make sure that we didn’t capsize. I rowed over close to the adjacent town of San Juan, then turned back.

San Pedro, with the volcano behind: 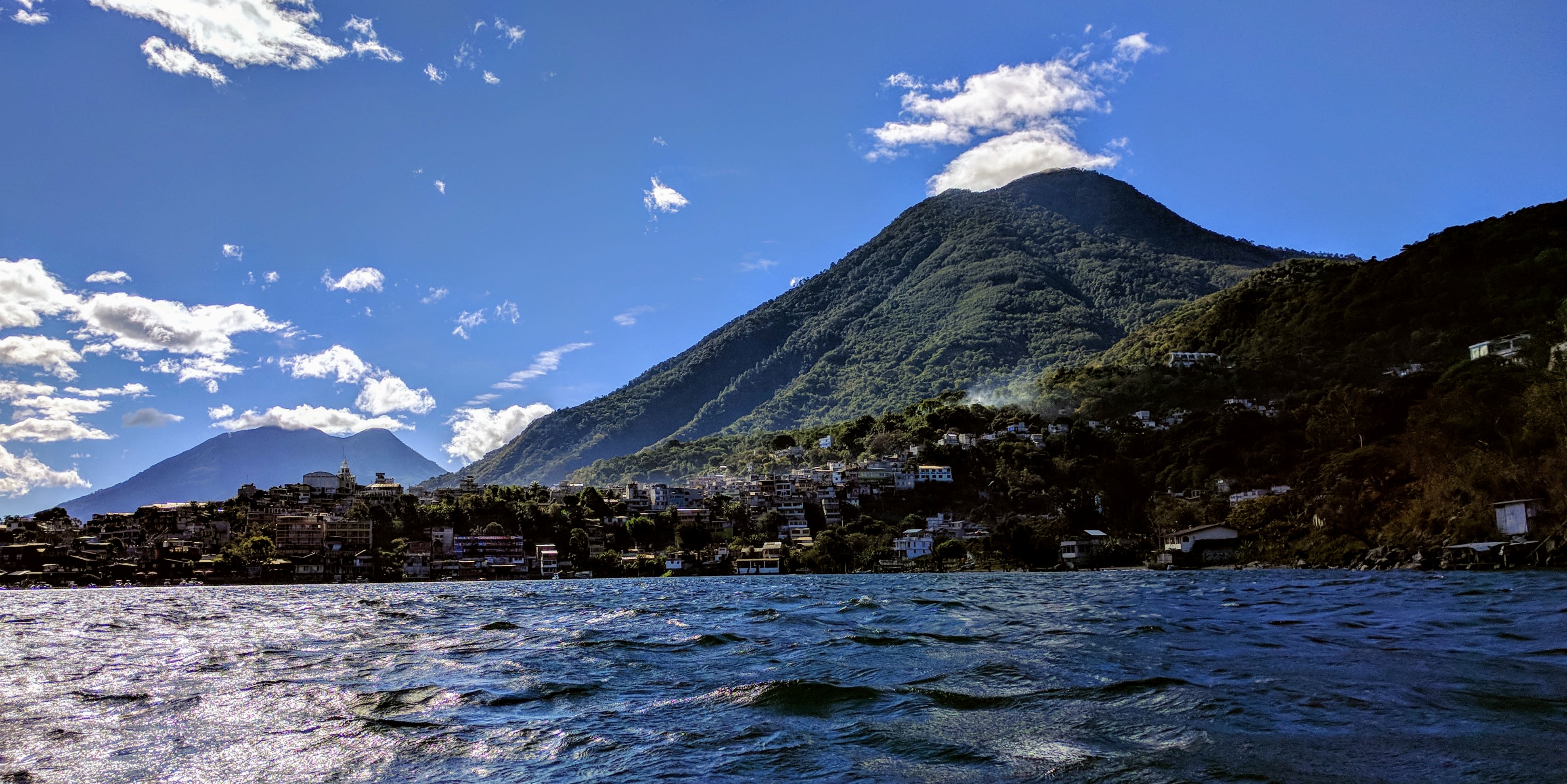 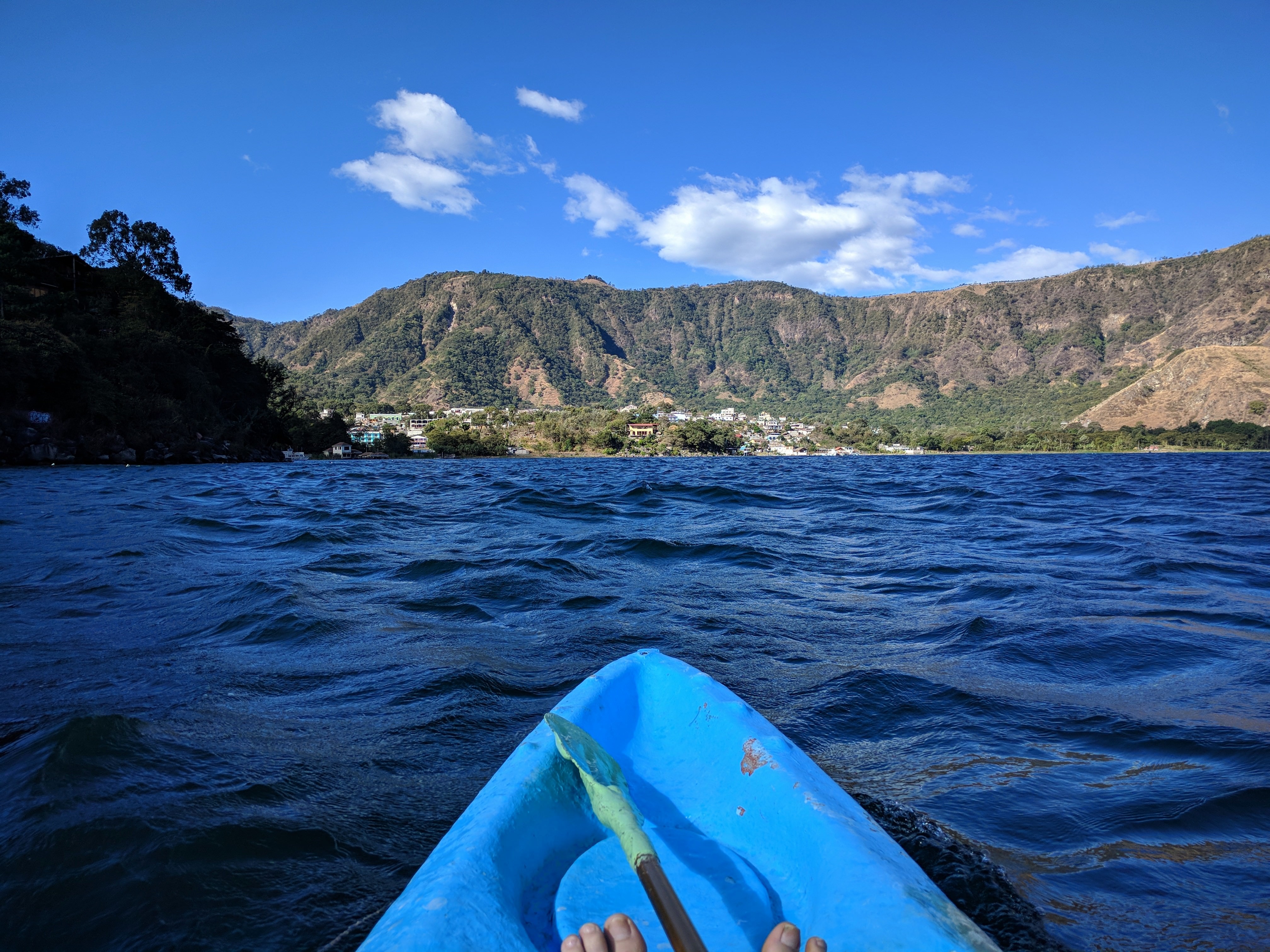 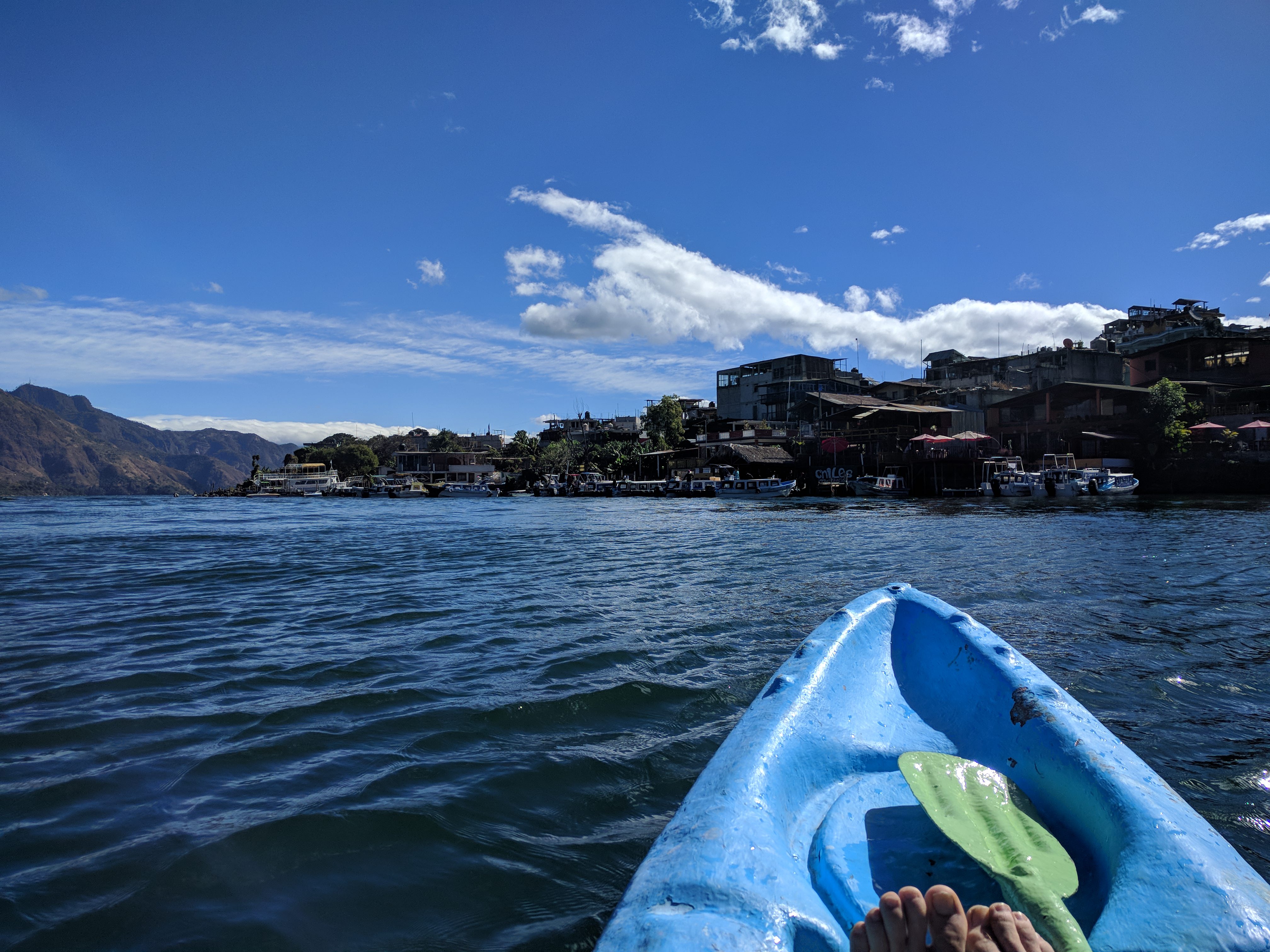 The guy on the dock offered to take my picture after I finished up. 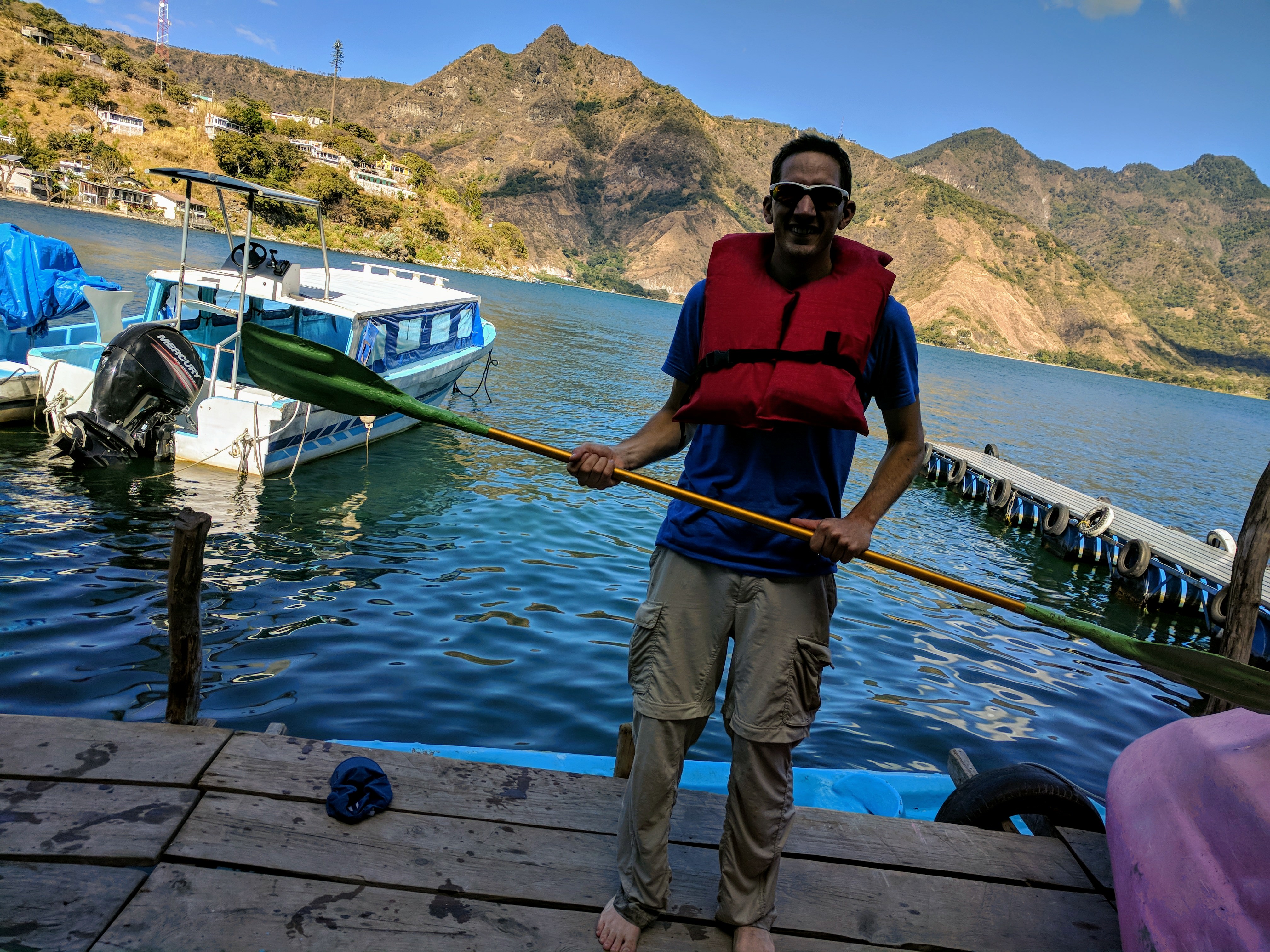 I was going to straighten that picture up, but I think it might have been an artistic decision on his part.

I returned to the hostel and got all packed up. I decided to try to make it to Antigua Guatemala by sunset. On the way out of town, I got hopelessly lost on all of the one way streets.

I accidentally left my helmet cam running, which allowed me to catch the following clip of one of the traffic guys giving me directions. I don’t know why, but I really love this video. He’s trying so hard to help me. 🙂

I eventually found my way and wound back up and out of this beautiful area. Antigua, here we come!

One could spend months in this area and still not see everything. On this trip, a little taste would have to suffice for me. It will be interesting to see how this region evolves. I hope it will be able to maintain its unique charm as the number of outside visitors increases. It really is a special place.

Realtime update: I’m still in San Miguel, El Salvador. I was originally planning to buzz through Honduras tomorrow (Monday), but I may wait until Tuesday instead. Some of my planning time will probably be consumed by watching the Super Bowl tonight.

11 thoughts on “The Loveliest of Lakes”