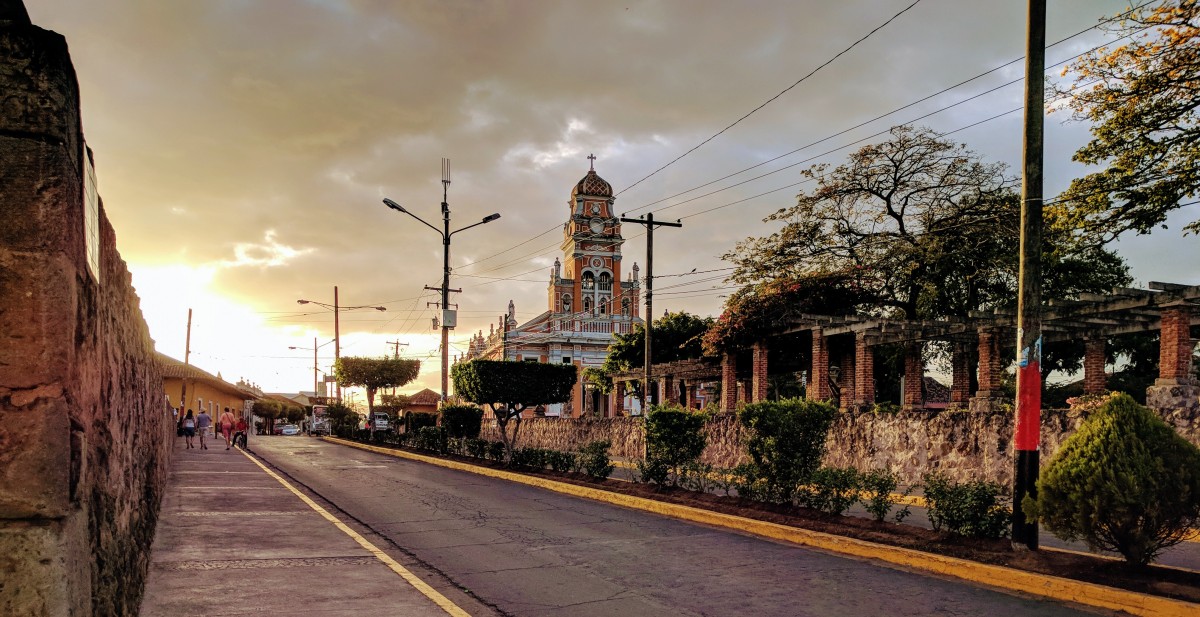 We finish up our time in Nicaragua with visits to Granada and San Juan del Sur. Then we try to successfully exit the country, which proves to be only slightly easier than our entrance.

Sometimes when bread gets moldy, you don’t notice it right away. You might make a wonderful sandwich with prime ingredients in the middle, but your first bite reveals that you should have inspected the outside more thoroughly.

This kind of sums up my feelings about Nicaragua. There are incredible things held within, but the border processes on both ends were quite stale.

I gotta be honest: At this point I was really far behind in my planning, so I had no real idea why I was going there. It appeared that there was plenty of reasonable lodging choices and it was on the way. Sold.

The ride was mostly uneventful. There was a stretch where there were a number of vendors selling animals along the side of the road. Some had brightly colored birds tied to a stick that they held up when traffic went by. Another held two big lizards by the tail. One even had a Capuchin monkey on a leash. Regular readers will know of my aversion to monkeys. Accordingly, I was not tempted to stop.

I reached Granada by early afternoon, with plenty of time to find a place. I struck out at a couple of them before finding Hostal La Colonial. It is normally $8, but they asked for an extra $2 for secure parking. The owner, Ramon, was a real penny pincher. He reminded me to turn off the lights multiple times. I knew we were going to get along well. 🙂

I walked all around town to see the sights. As I said earlier, I didn’t really do any research about the significance of these places. I’ll just regurgitate a bunch of photos and call it good. 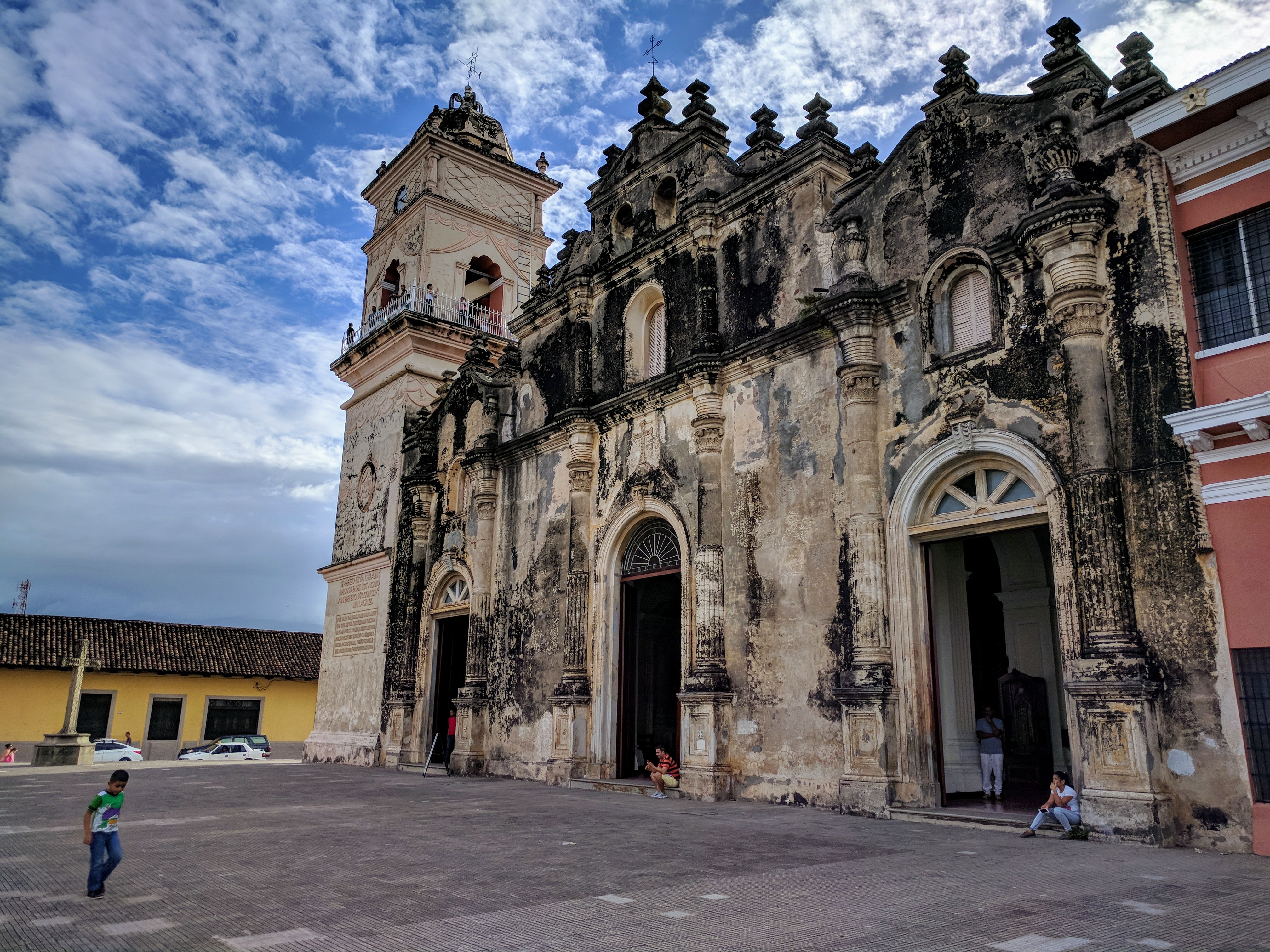 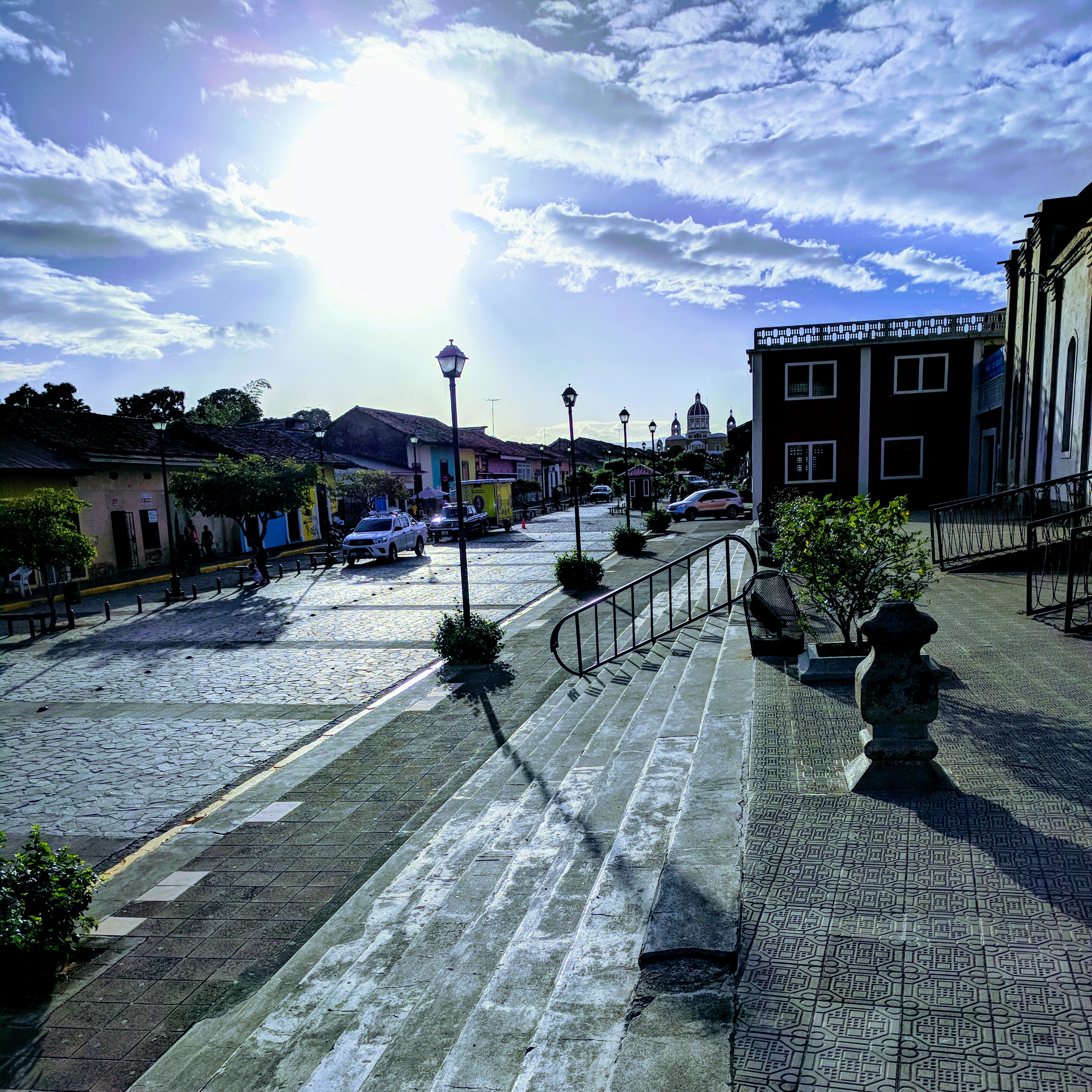 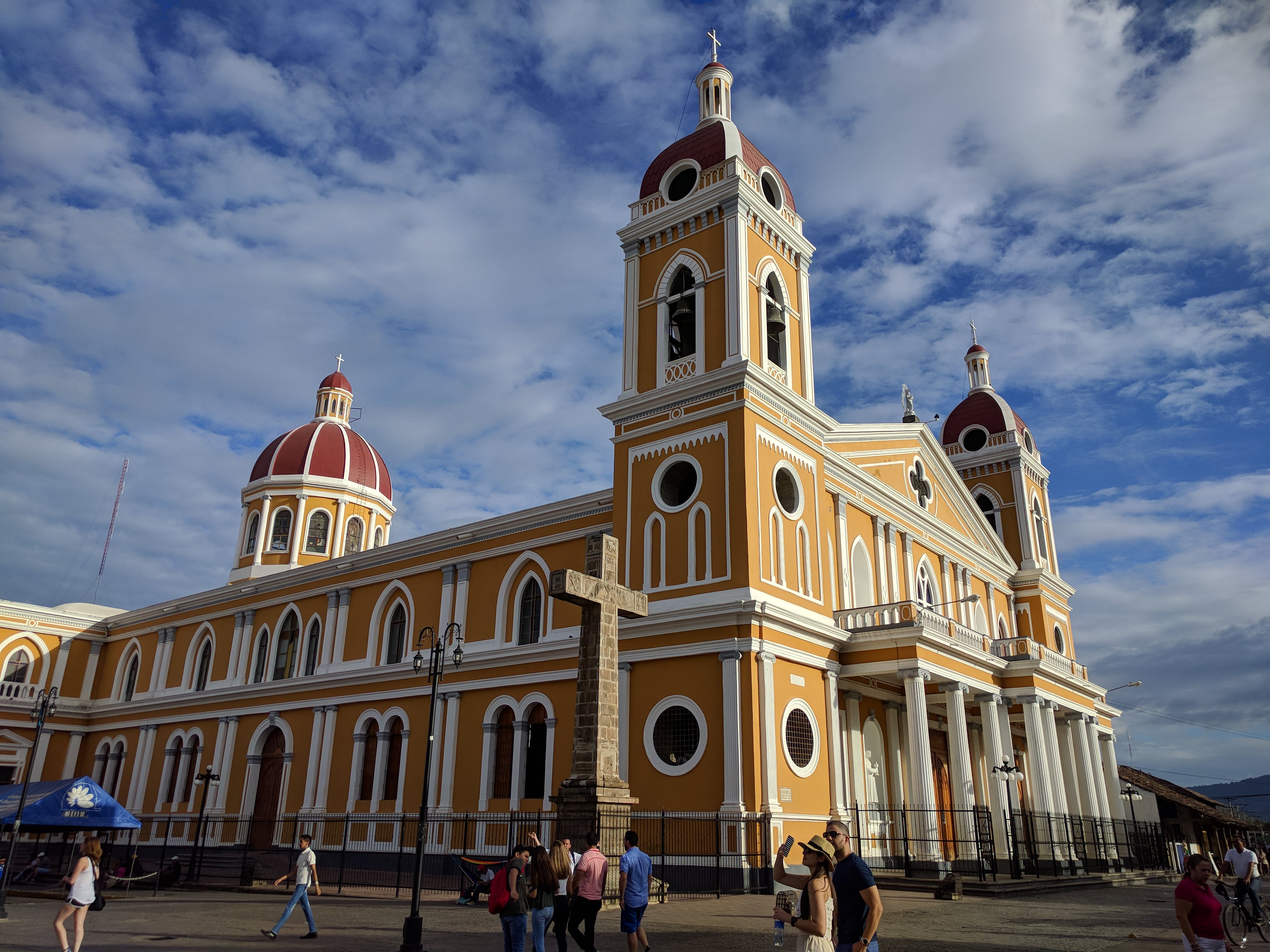 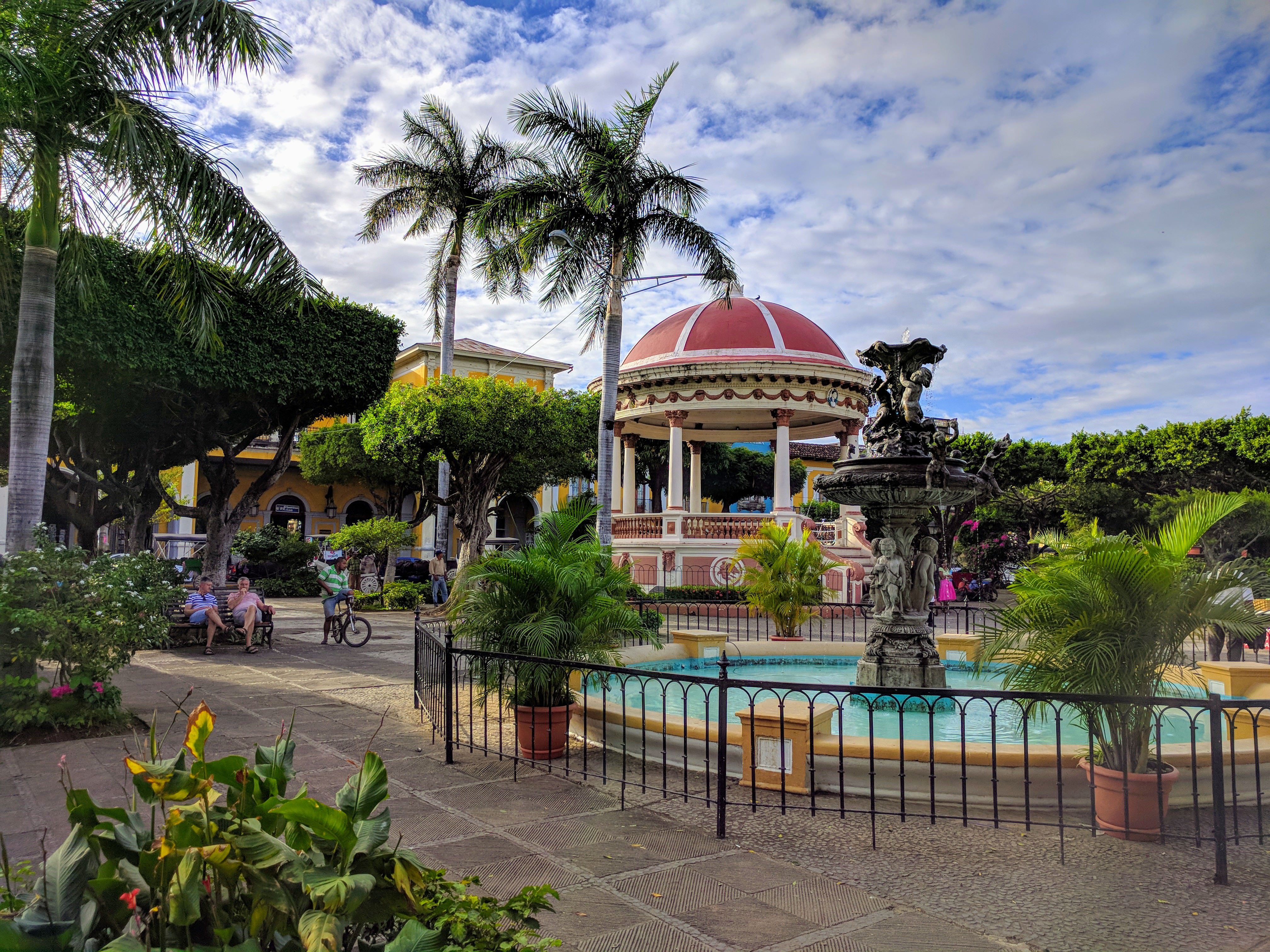 There were lots of horse drawn carriages, both for tourists and for cargo. 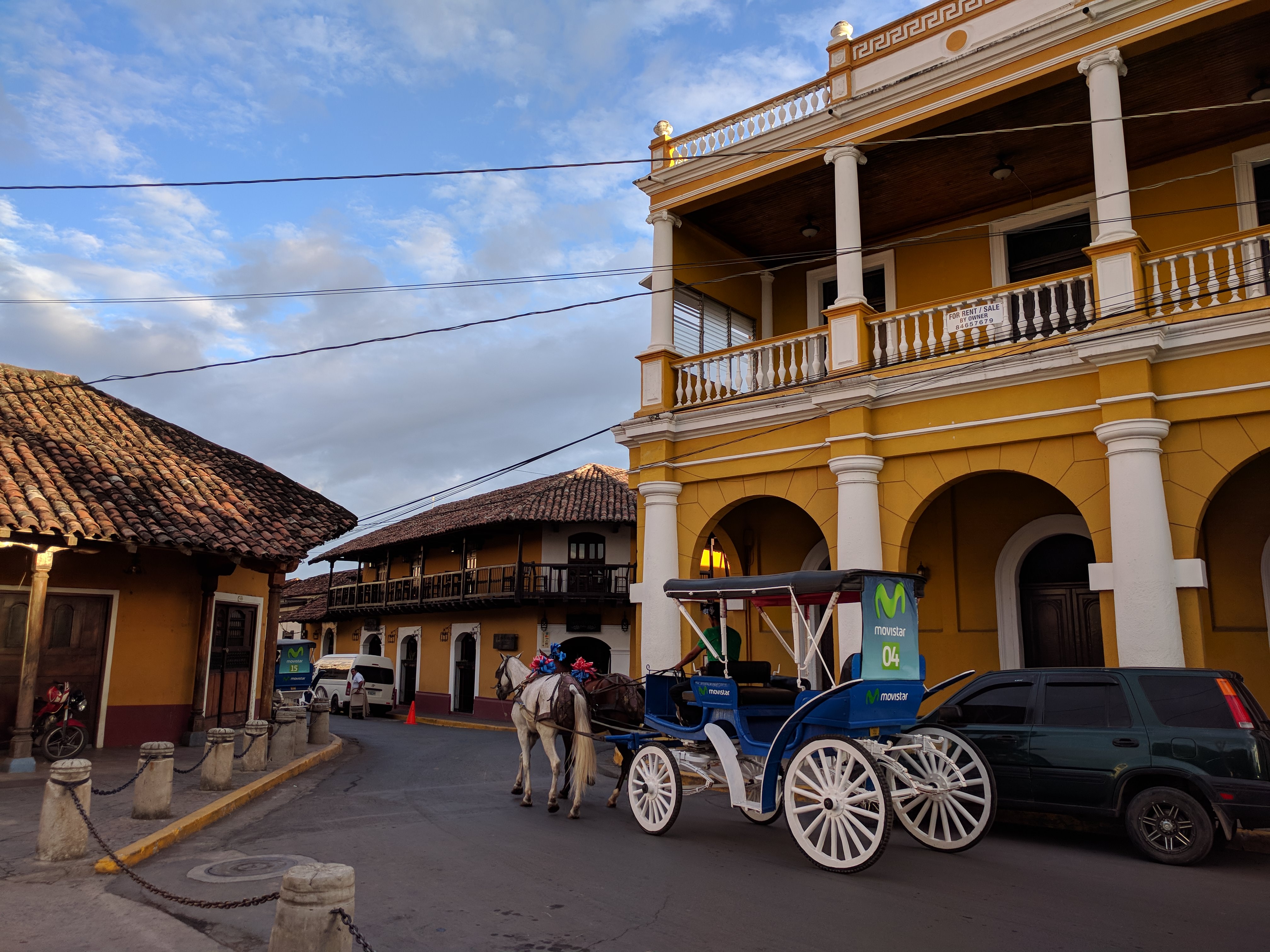 The following is not a very good picture, but I need to write about this phenomenon: 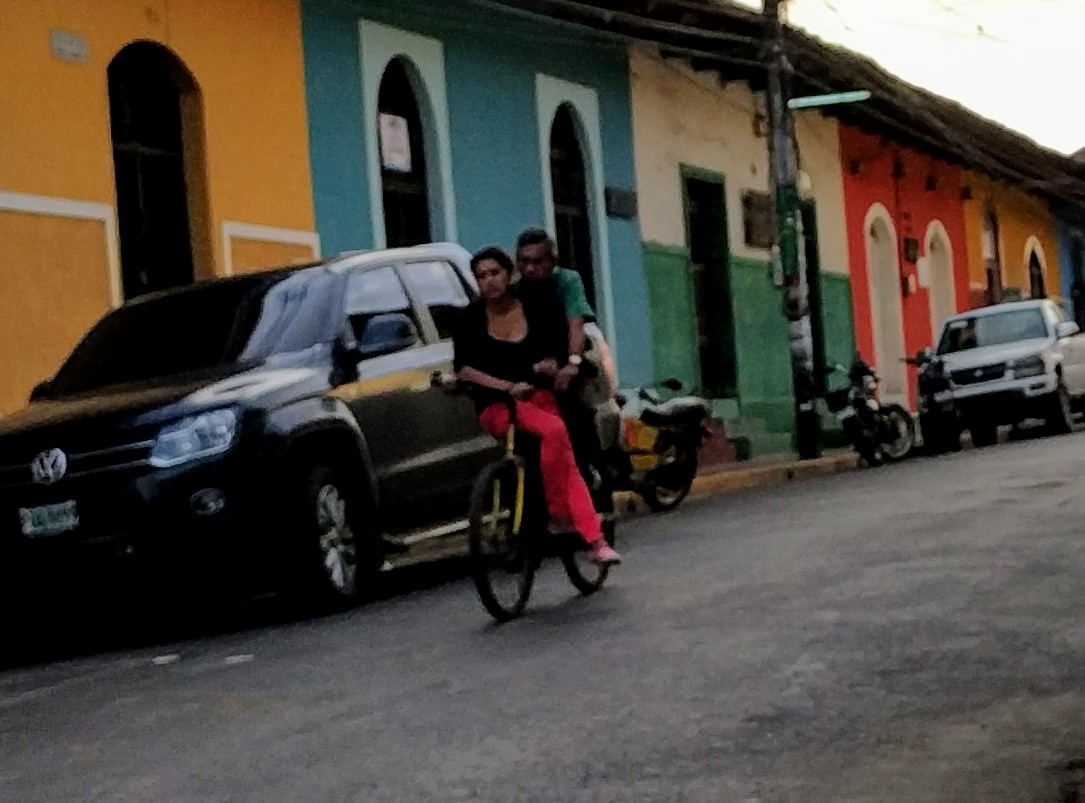 As soon as I entered Nicaragua, I started seeing this. Every bicycle here is a bicycle built for two. Indeed, it almost seems rare to see one without a person sitting side saddle on the center bar. Sometimes it is a couple, sometimes it is two guys, once I even saw a mother with two children seated this way.

This photo would have been great without the clouds around the volcano:

I made it all the way through town to Lake Nicaragua. 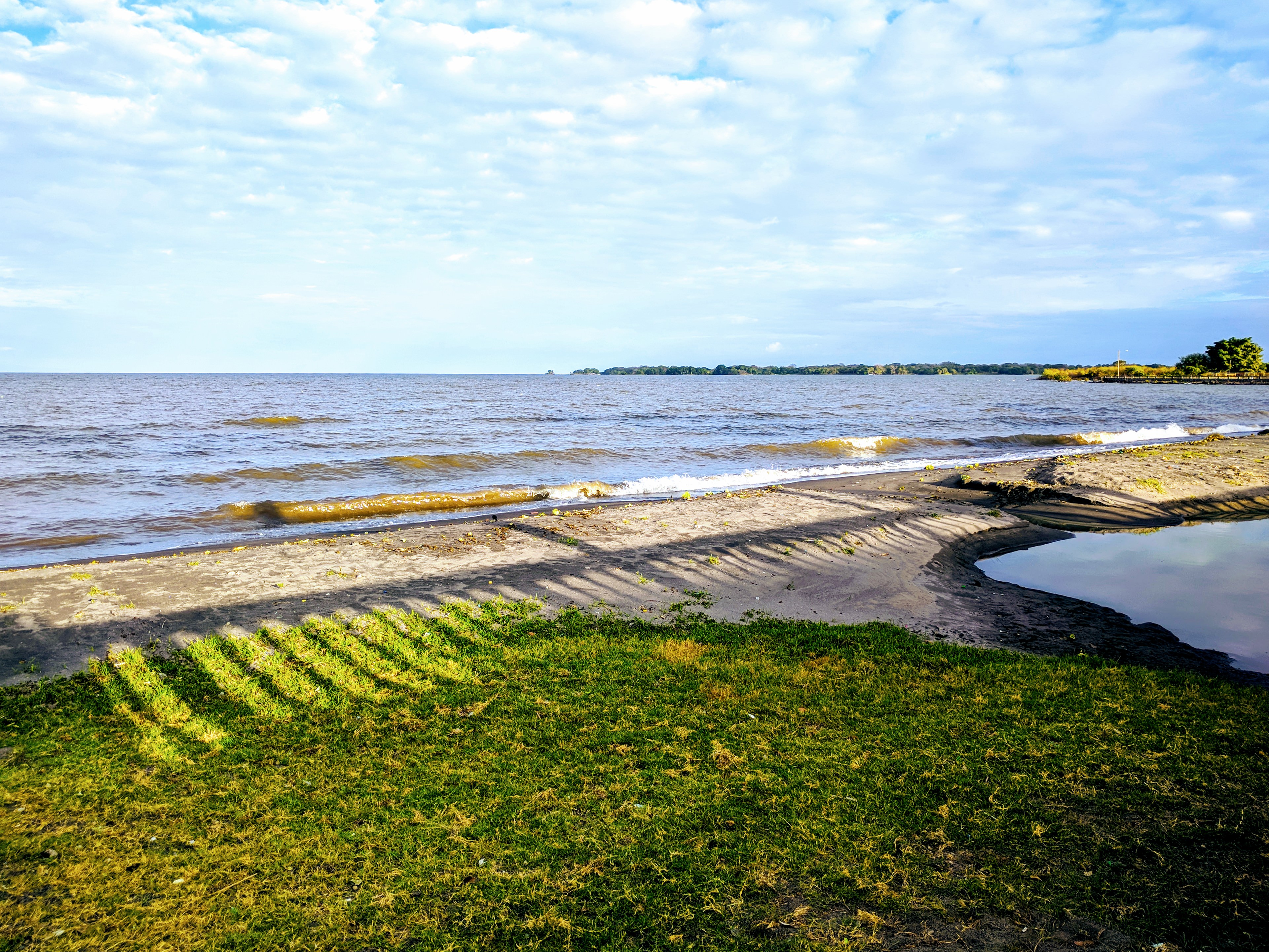 It’s not very scenic at this point, but is one of the prime reasons that Granada grew to be the town it is. Even though it is much closer to the Pacific Ocean, Granada is actually a port to the Atlantic. It is connected through the San Juan River. Lake Nicaragua is by far the largest lake in Central America. 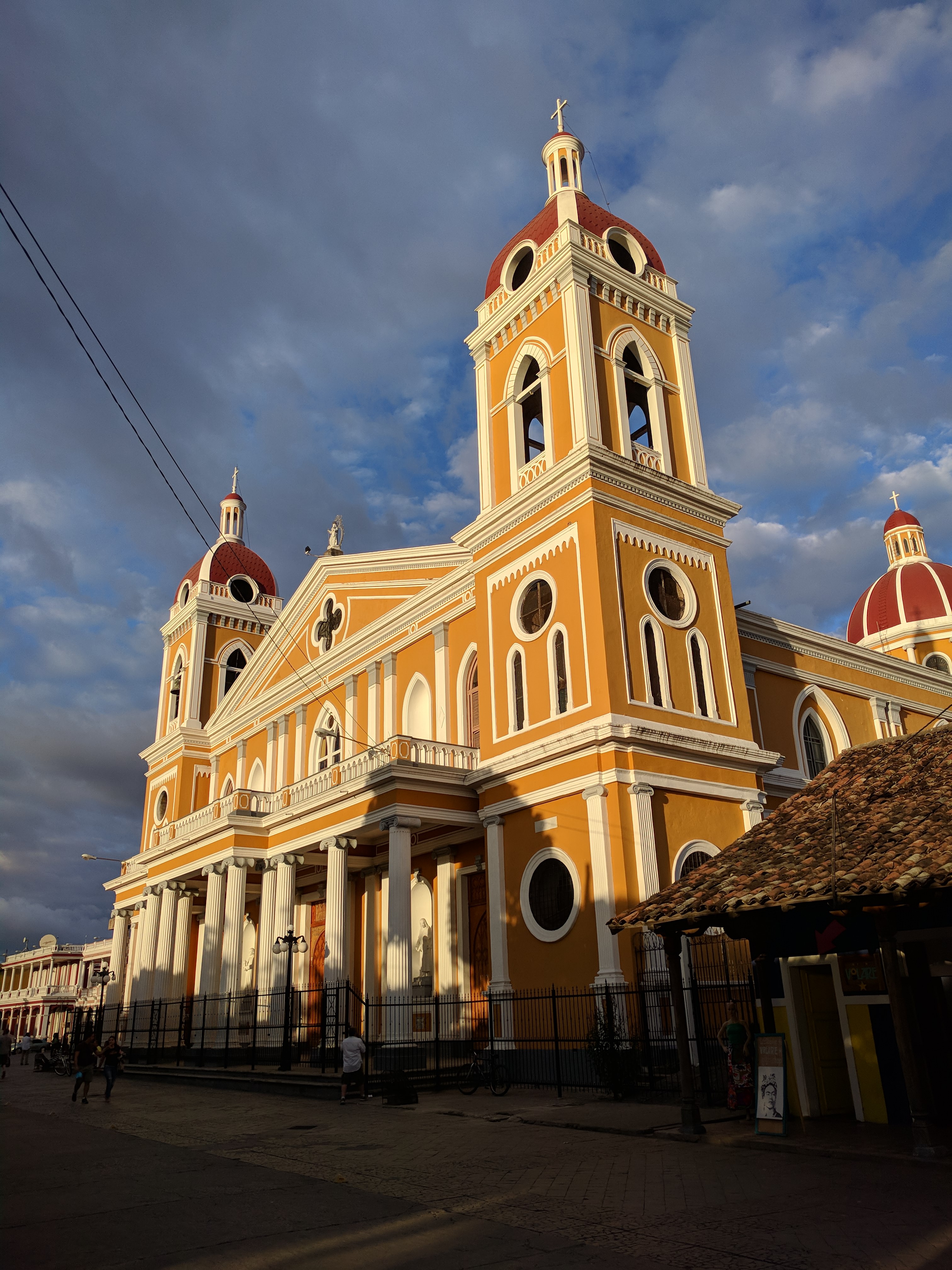 I grabbed supper at a little comedor for about $4. The ordering process was extremely confusing, but the food was really good. 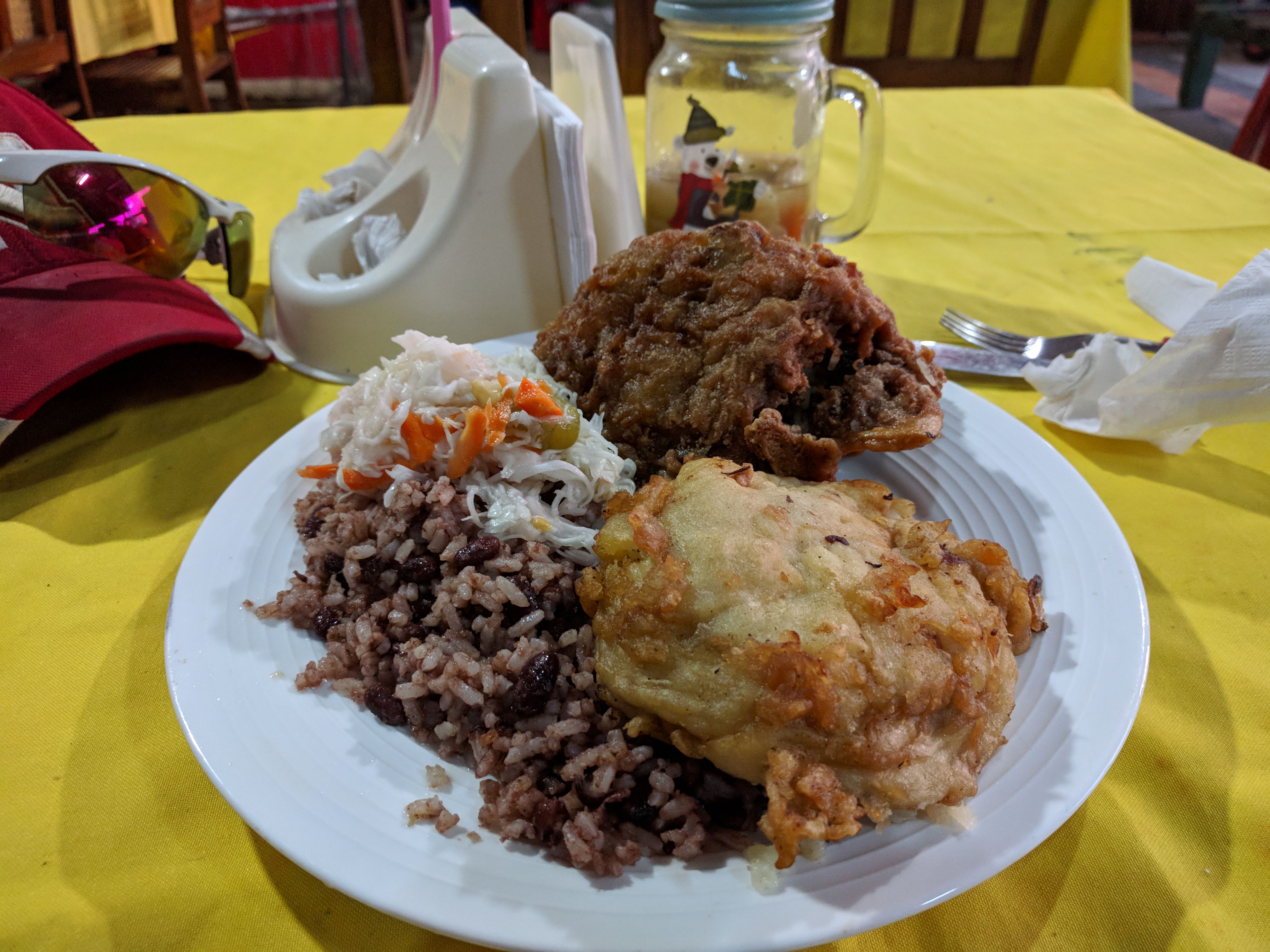 I had a quiet evening getting some work done.

My little Sister’s birthday. The day that my hopes of being the baby of the family were eternally dashed. Good thing too, as I don’t know if I could pull off that role. 🙂 Happy B-Day, Sis! 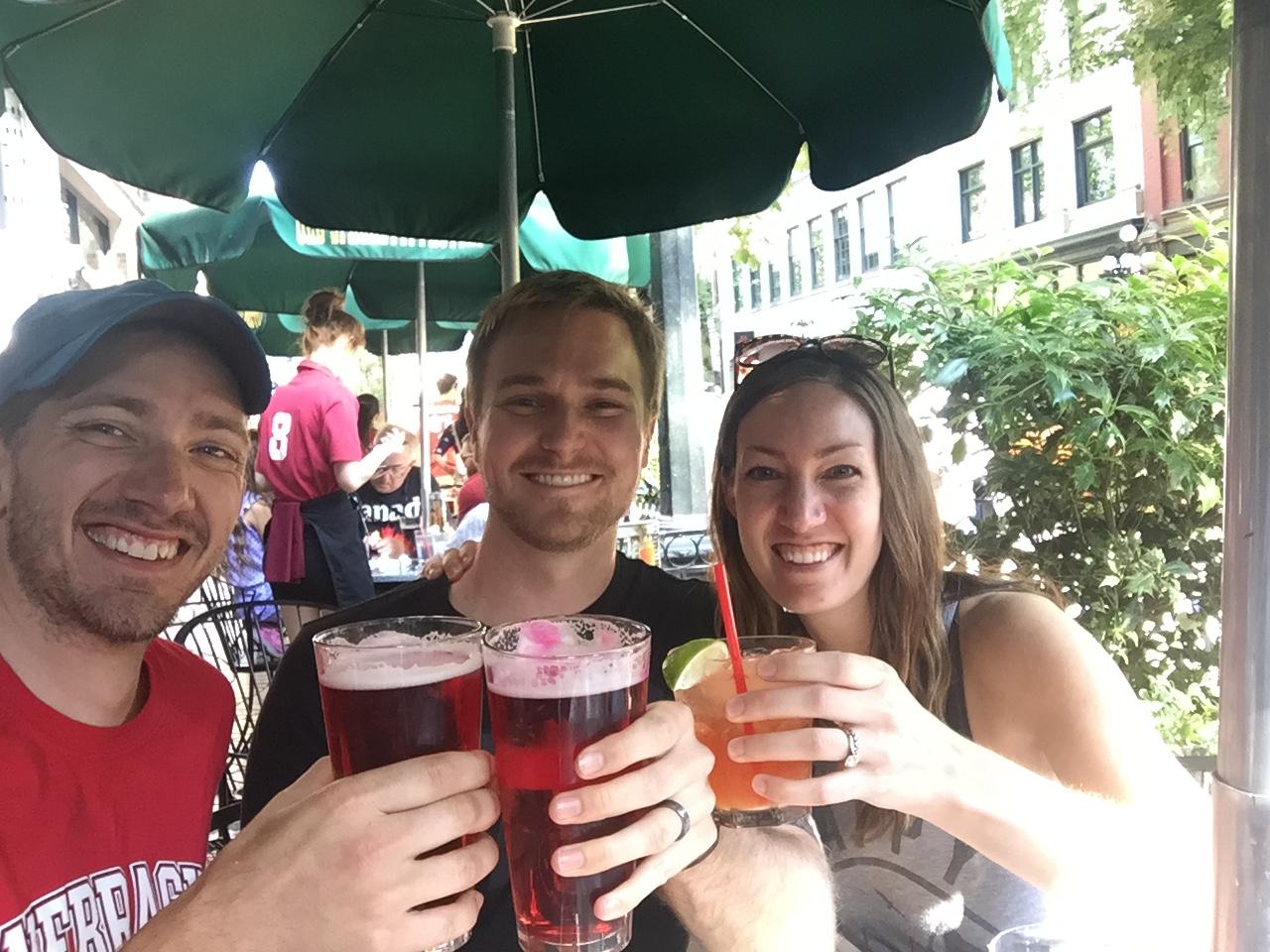 (Wow. Canada Day was a long time ago)

I made a tough decision this day. I really wanted to see the island of Ometepe, a dual volcano island which is in Lake Nicaragua.

I decided to pass on it for a few reasons. My ankle was still only about 90% recovered from my crash and I knew the hike to the tops of the volcanoes were fairly strenuous. Anyone who has ever had an ankle injury knows that they just take time to heal.

Additionally, I was still kind of in my “go mode.” Part of this may be an after effect of my crash. I’ve had a difficult time in maintaining the correct attitude in Central America. I think I’ve viewed this area more as an obstacle to be conquered than as a morsel to be savored. I’m still examining my thoughts and feelings, but this is the best way I can explain it at the moment.

I decided to take one night along the Pacific Coast at San Juan del Sur before heading into Costa Rica.

A couple of “working carriages” in Granada:

The next time someone asks to borrow your truck to haul something, just show them this:

I was able to pull of the road to get a decent view of the two volcanoes of Ometepe. It’s not a great picture, but I almost got killed by a dog so you had better appreciate it. 🙂

I parked along the beachfront and immediately made some new friends. Though I am not the most outgoing person, Annie is a magnet. 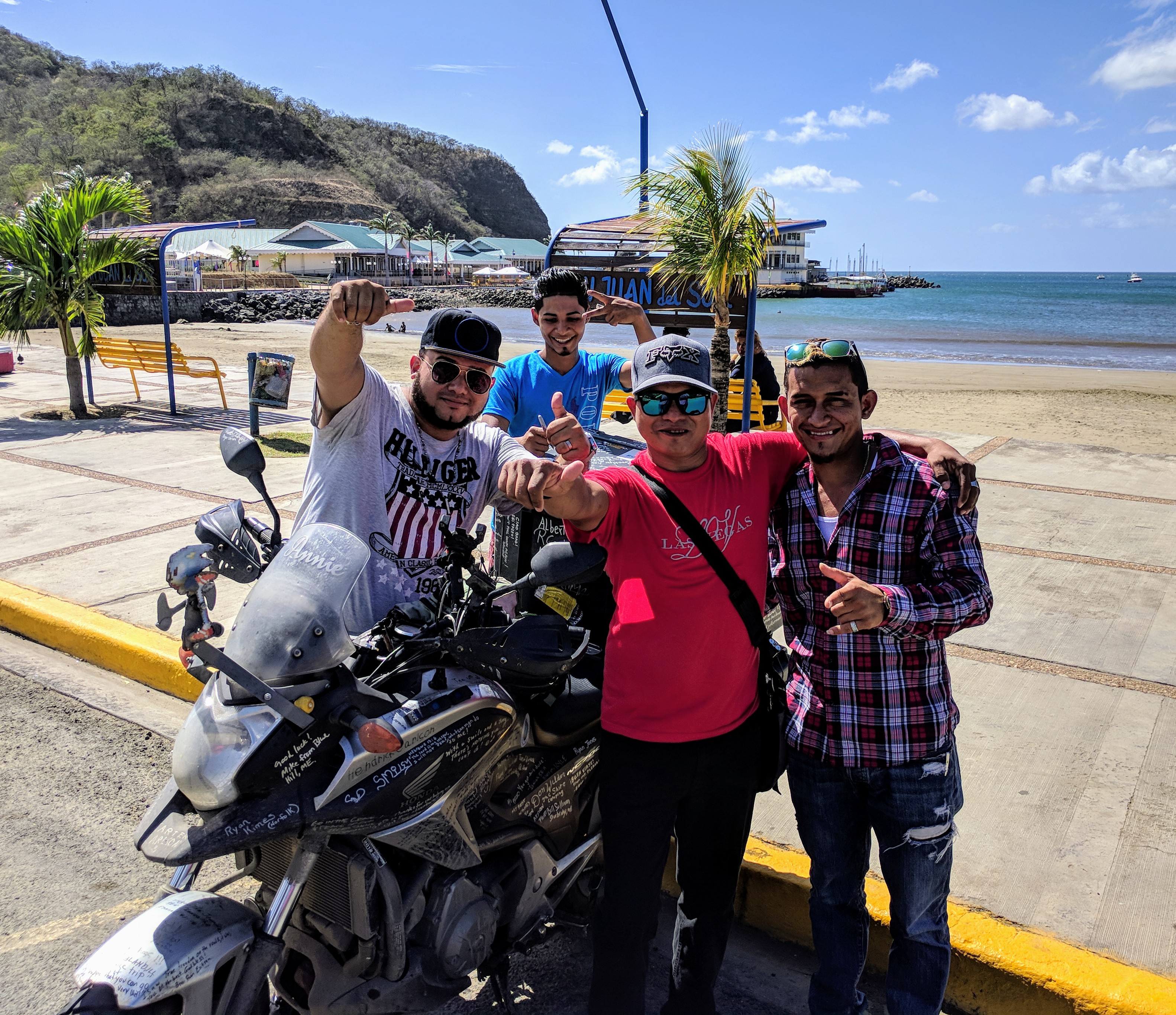 I told these guys that I liked everything about their country except for the border crossings. They told me, “That’s why it is so safe here.” We had a good laugh. Additionally, I think during this conversation I finally understood the difference between the Spanish words “ahora” and “ahorita.” (I might get into that another time.)

They kind of made me feel like a mini-celebrity, each of them wanting a picture together individually. 🙂

I made marginal progress on my work, as the view here was a bit distracting. 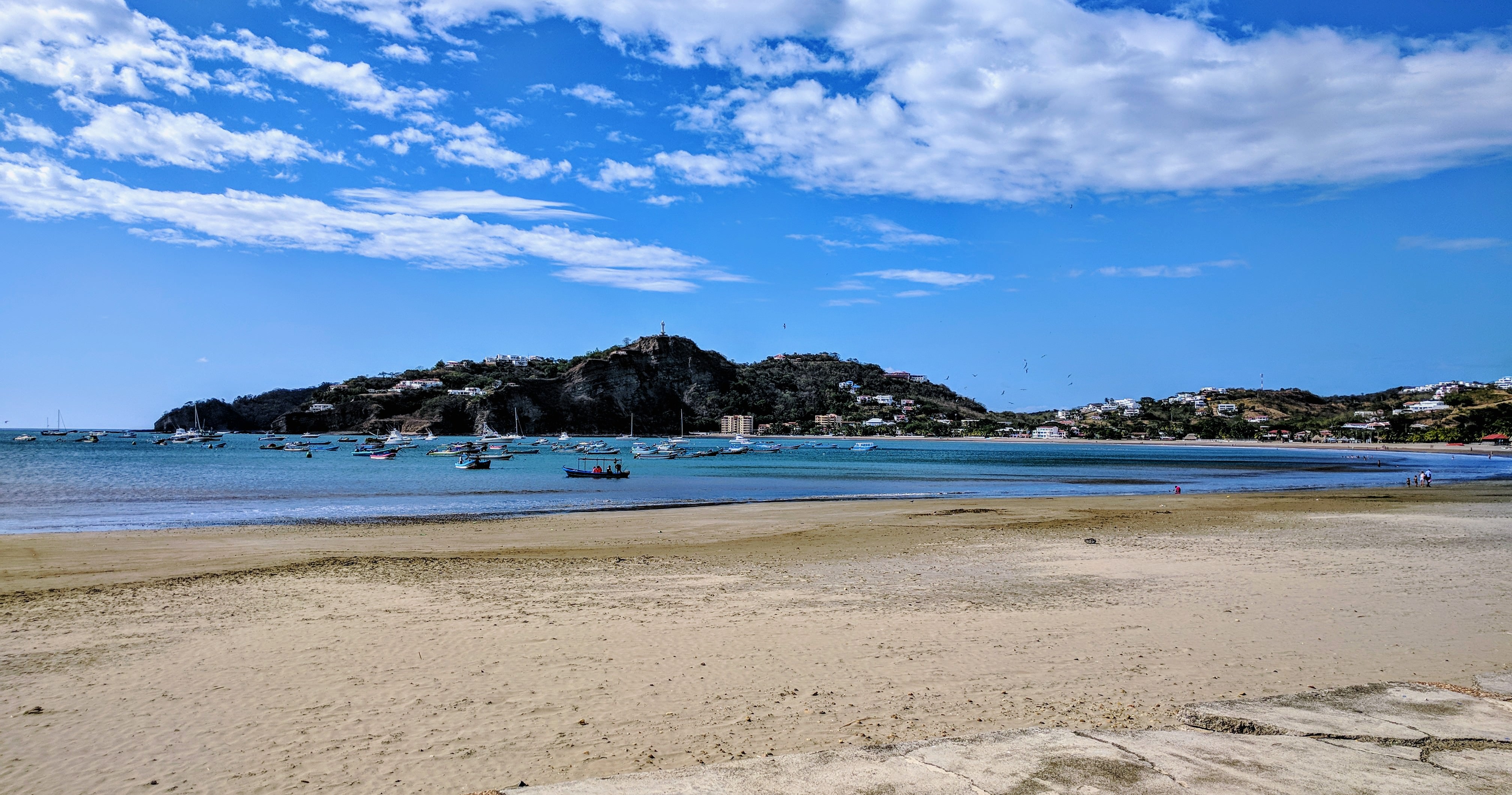 I booked a hostel which was further from San Juan than I thought. I had a bumpy ride over some dusty roads to reach it. Upon arriving, I found out that I had actually reserved the next night instead. They were able to accommodate me, but it cost a little over $17. Ouch! It was a picturesque place, though. 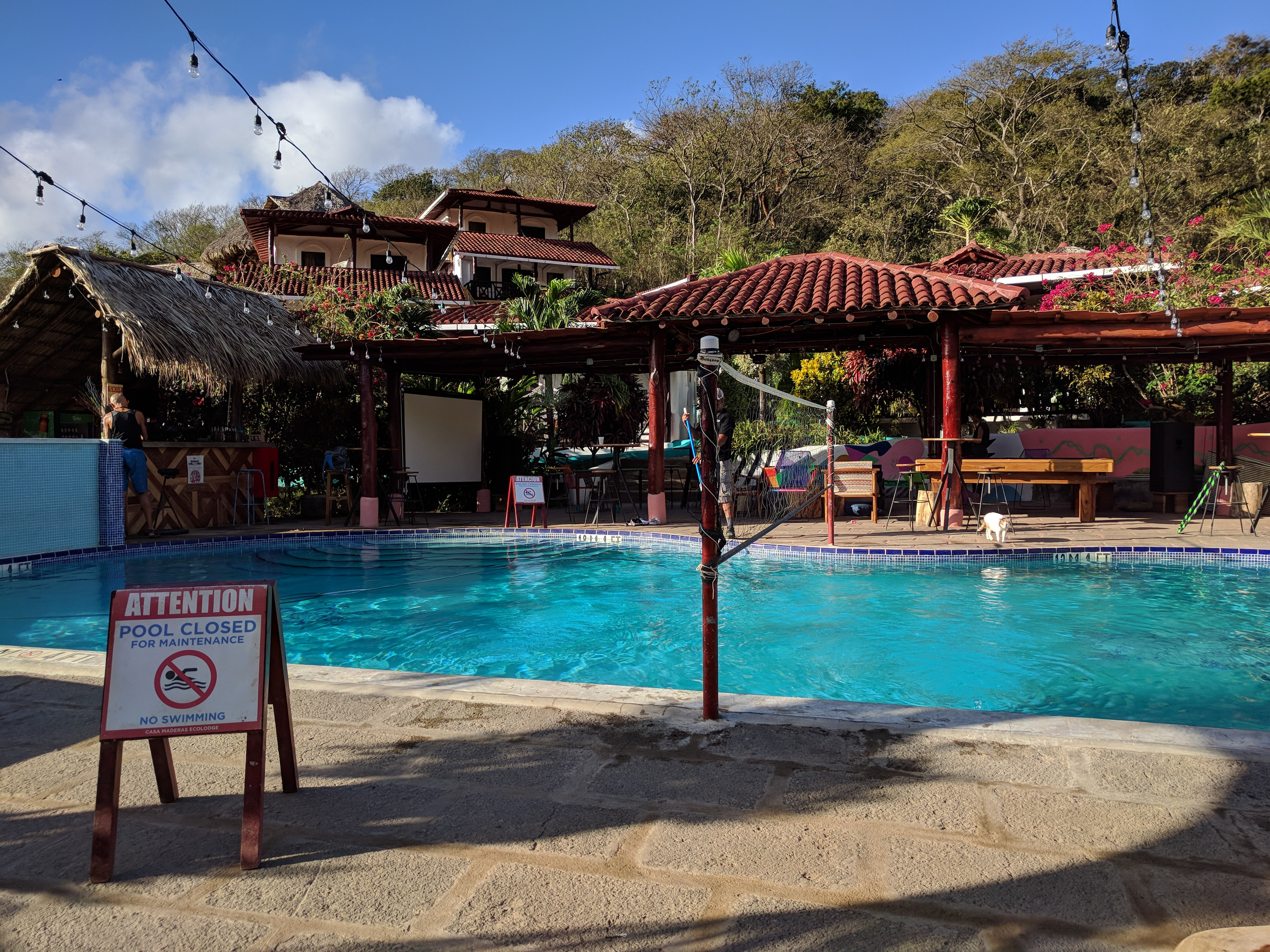 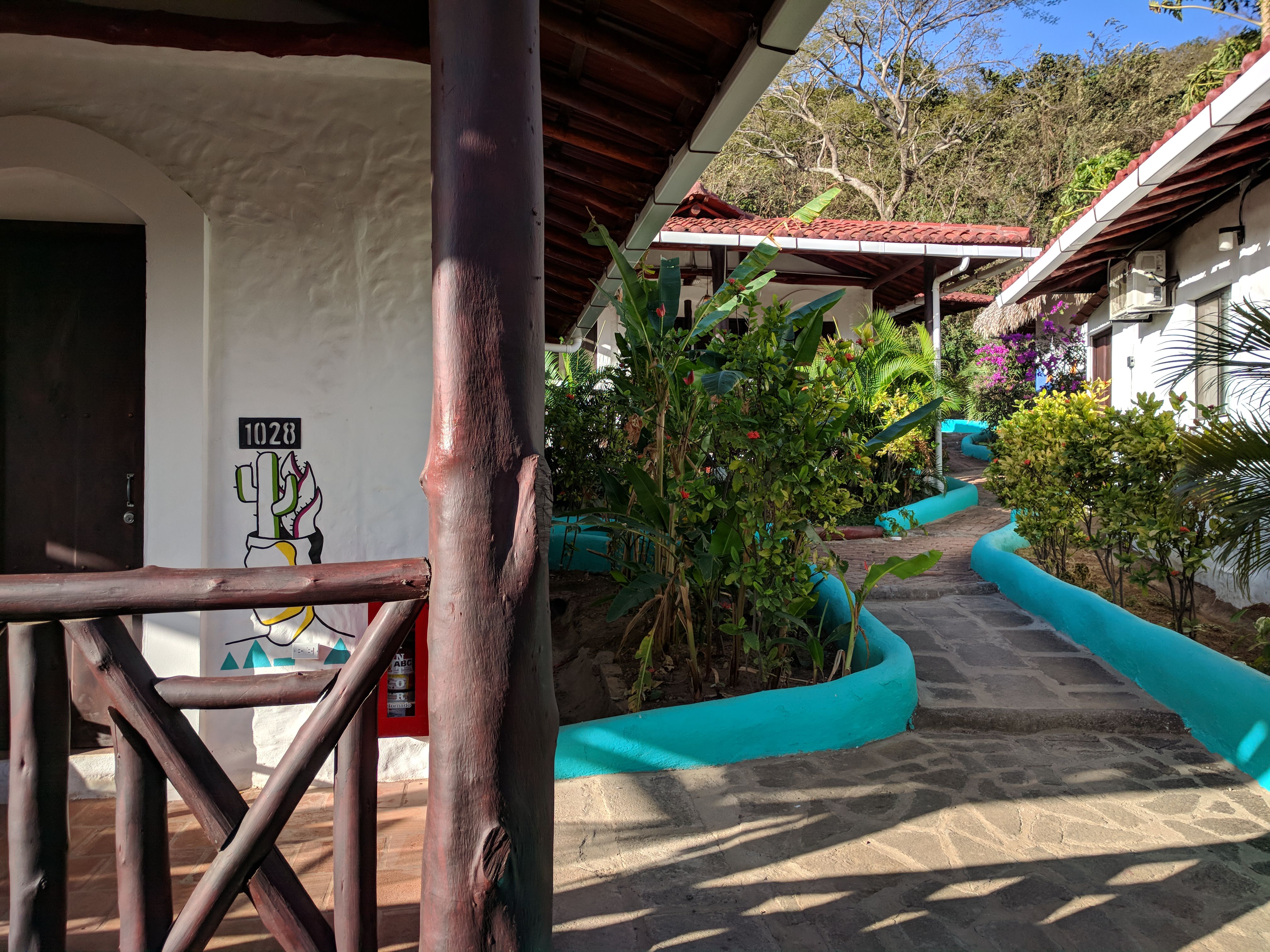 This was more of a “party” style hostel, where there are consistent bass thumps at 128 beats per minute most of the day. They stopped at about 10:30pm, which was fairly reasonable for a Saturday night.

I wasn’t too social, but I had some good chats with my roommate from Vancouver. She is able to work remotely at her job, so she can base herself in some incredible locations. I was a little jealous. Having an income was kind of nice, at least as I remember it. 🙂

Just when you thought this publication was devoid of adventure, it is time once again for our favorite experience: A Central American border crossing! Yay!

I’m going to be a bit more brief than normal, if for no other reason than I’m getting a little weary writing about them. I’d read that this was a frustrating border, which matched my experience.

As I neared the customs building for Nicaragua a half dozen guys basically surrounded me as I was still riding, yelling at me to stop. I tried to concentrate on not hitting any of them and continued on. I actually blew right by an official checkpoint, but noticed an official looking person in my mirror. I stopped and he walked up to me to check some documents. He seemed to understand that I did not stop initially because of the crowd around me. 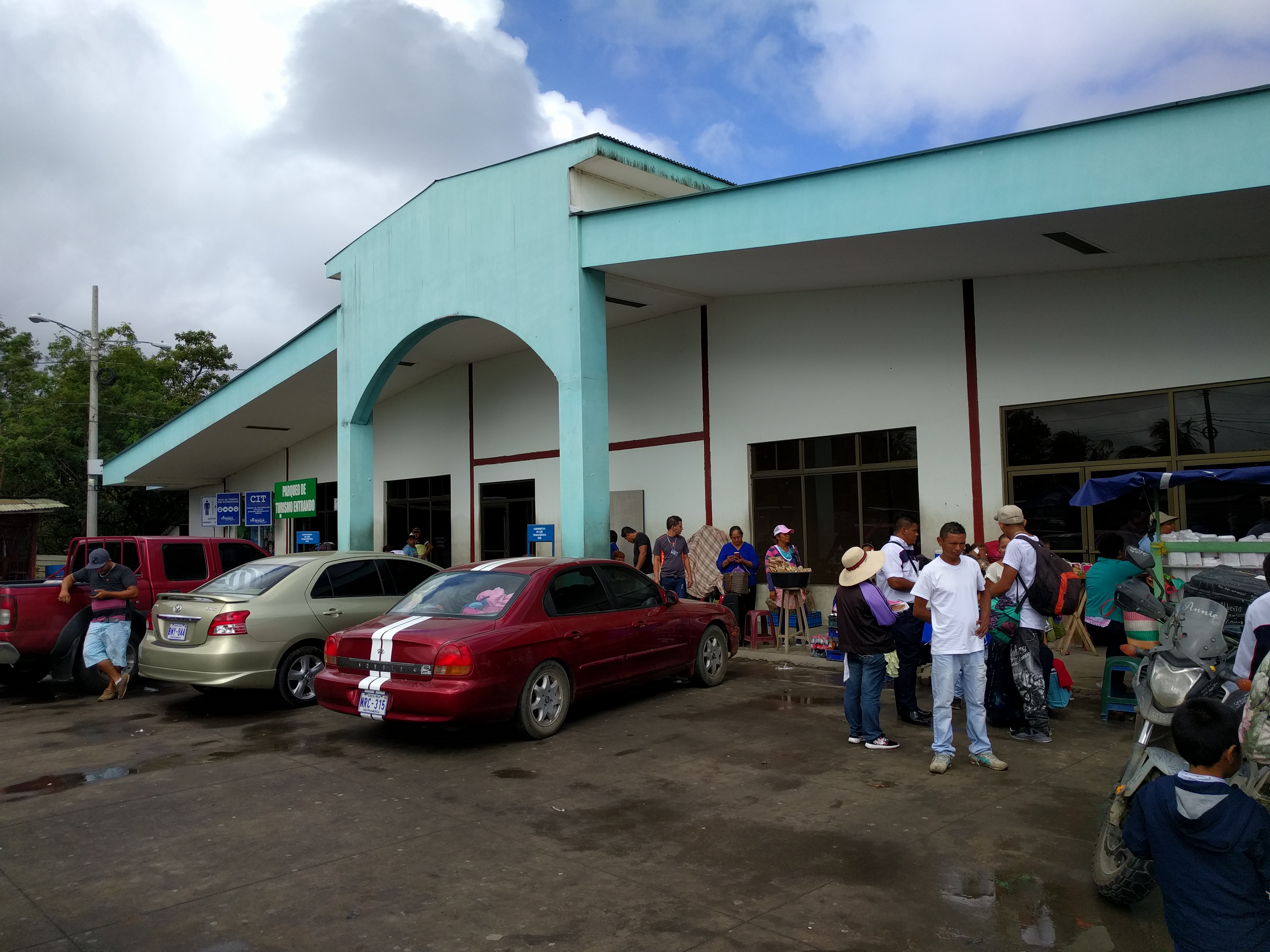 The main building was a real mess. Very few signs, hidden passage ways…almost like it is designed to frustrate the novice traveler. People and vendors crowd the entrances, making it tough to see where you are going. 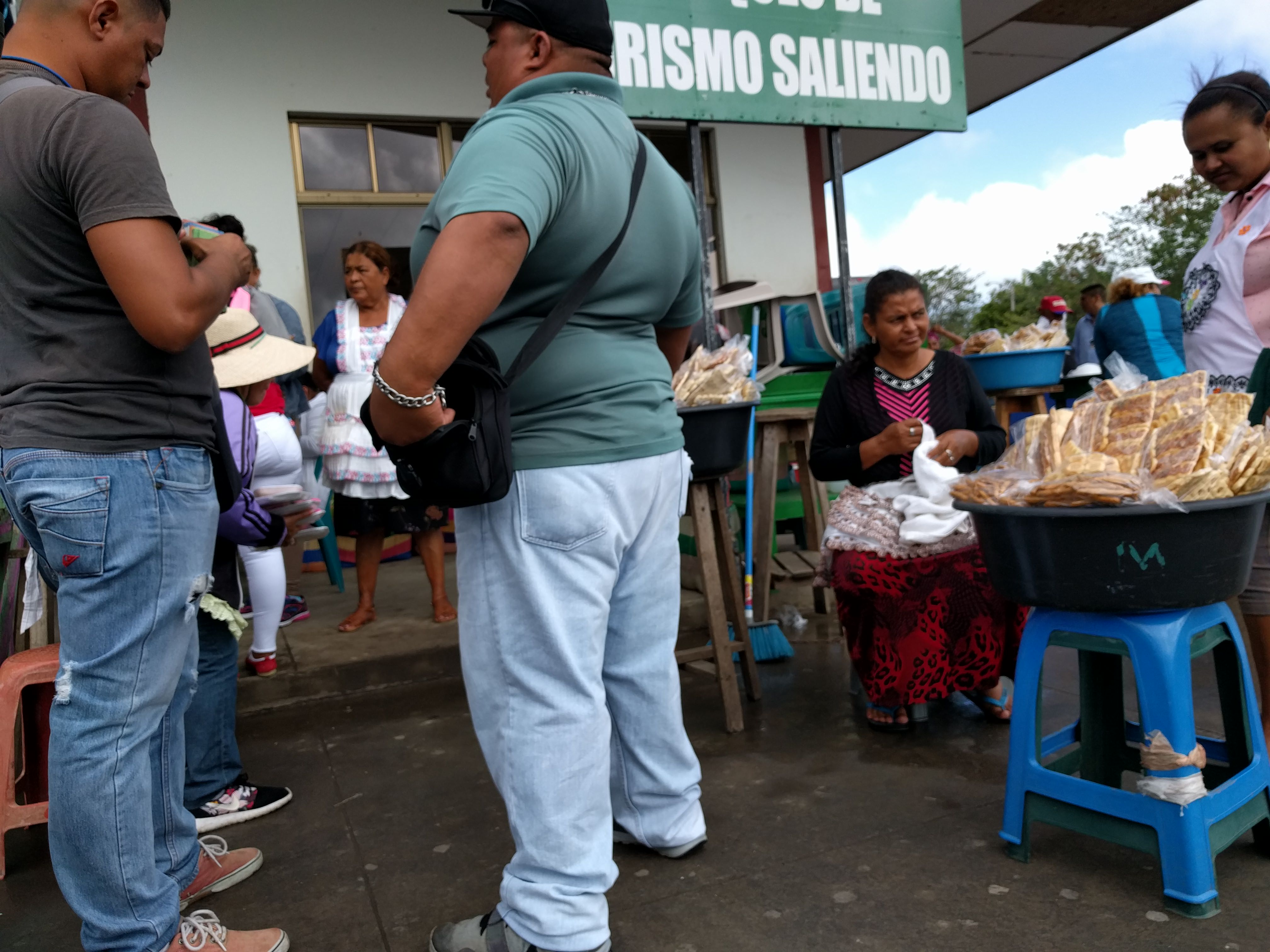 I tried to do everything myself, but after about ten minutes it was clear that it was a hopeless case. One of the helpers had been calmly pointing me in the right direction and I decided to ask for his services. This was my first time using a helper at a border.

A summary of events:

-Get a form from a random lady in a chair next to the door for people who are entering Nicaragua.

They need to make this box bigger: 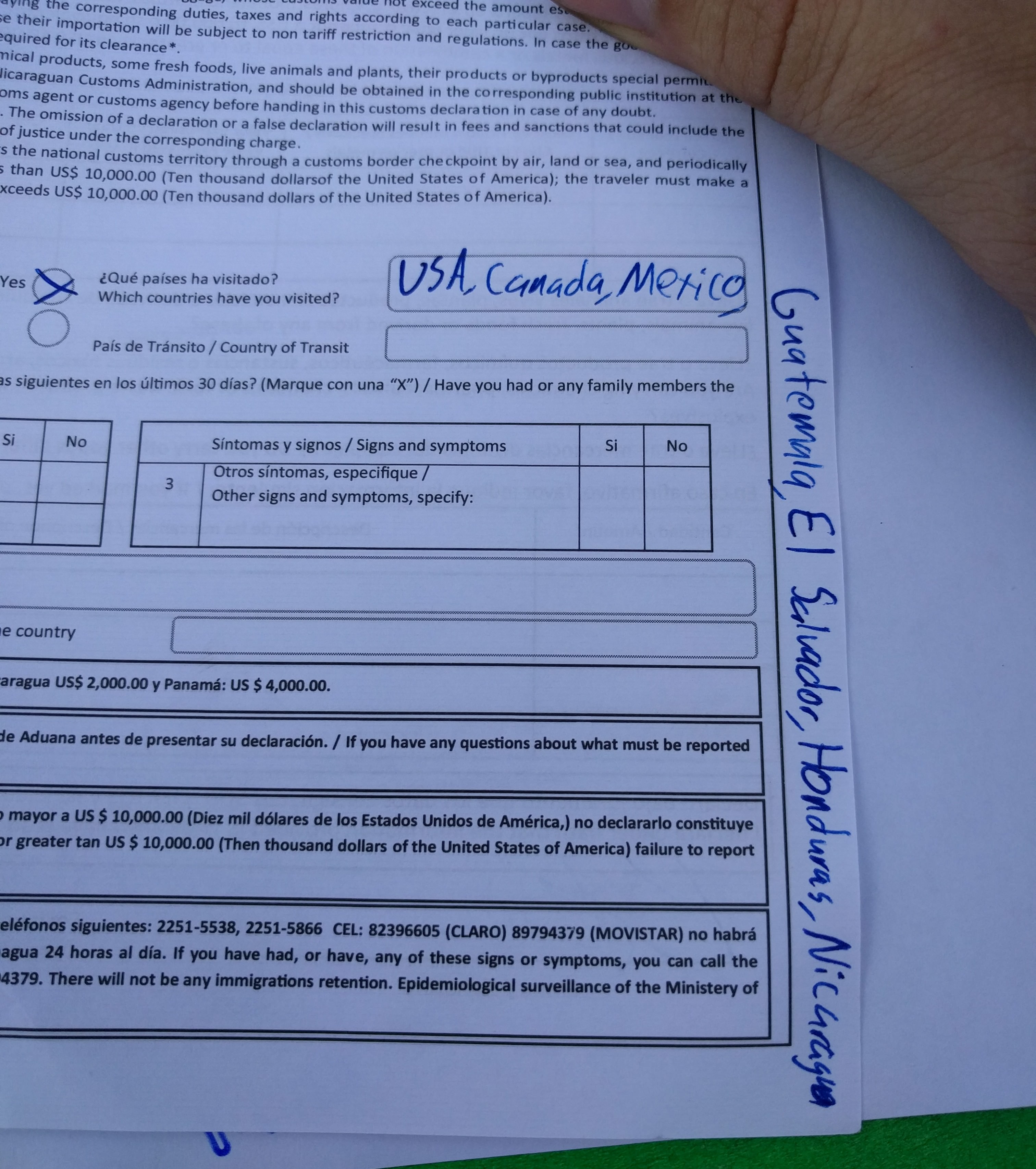 -After completing it, return for her signature.

-Cross the parking lot to find a policeman for his signature too.

-Follow helper down some unlabled hallways to the office for customs.

Baggage waiting to be scanned: 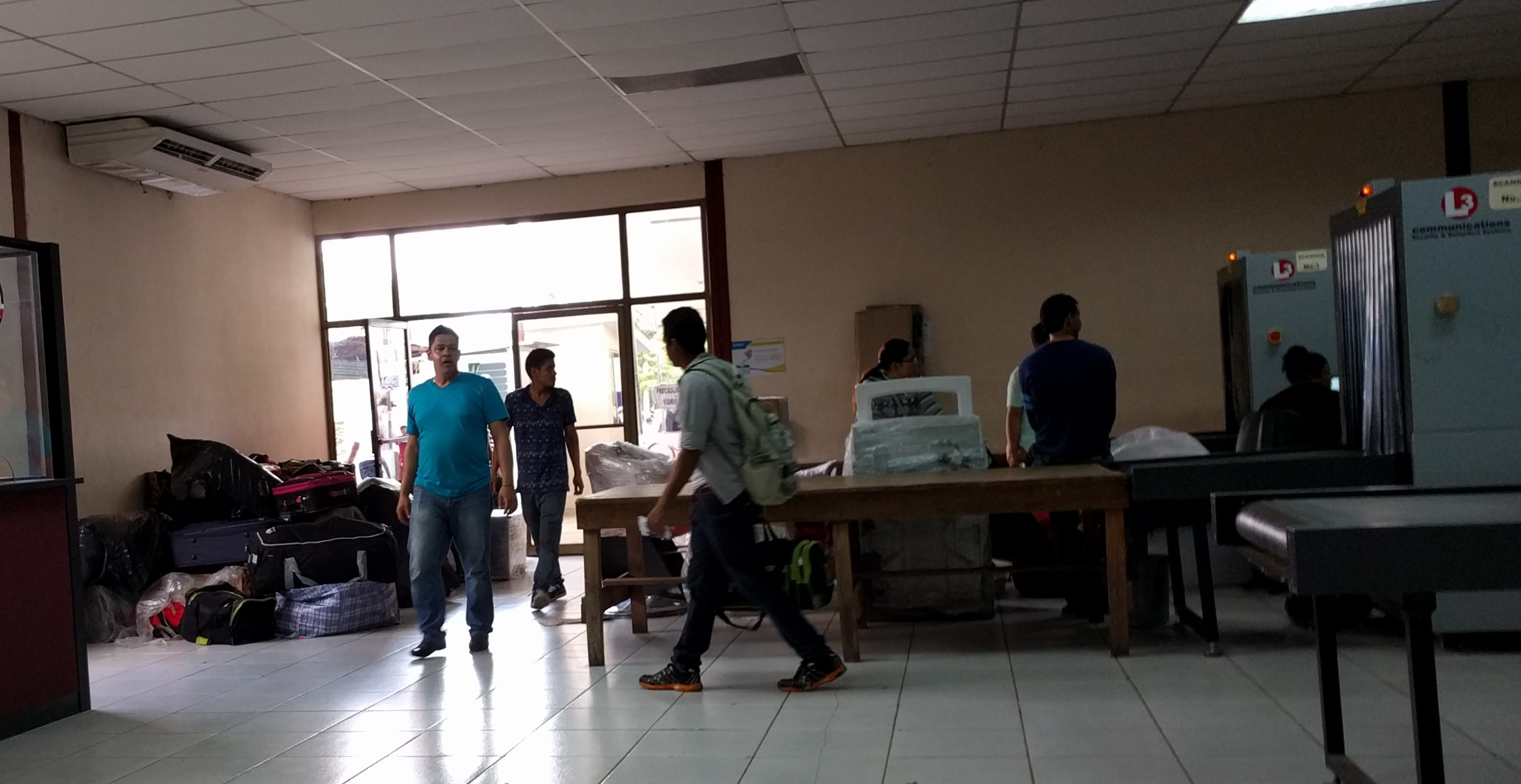 -Get some signatures and cancel importation document.

-Enter a door on the back side which is migration office for departures. 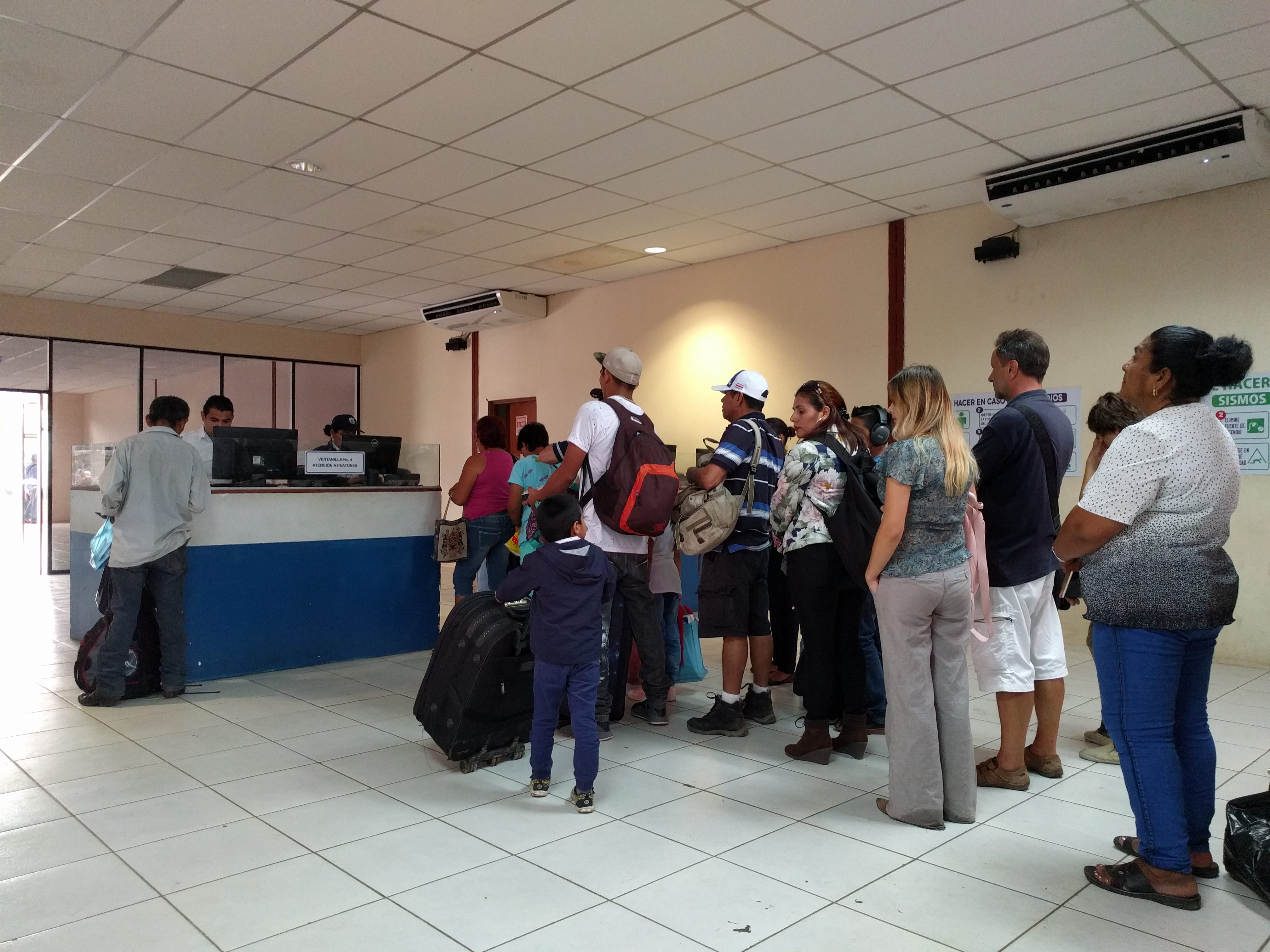 I gave the helper $5, which he seemed happy with. There was one more checkpoint on the Nicaraguan side. The official told me that my next stop was to go through fumigation in Costa Rica. 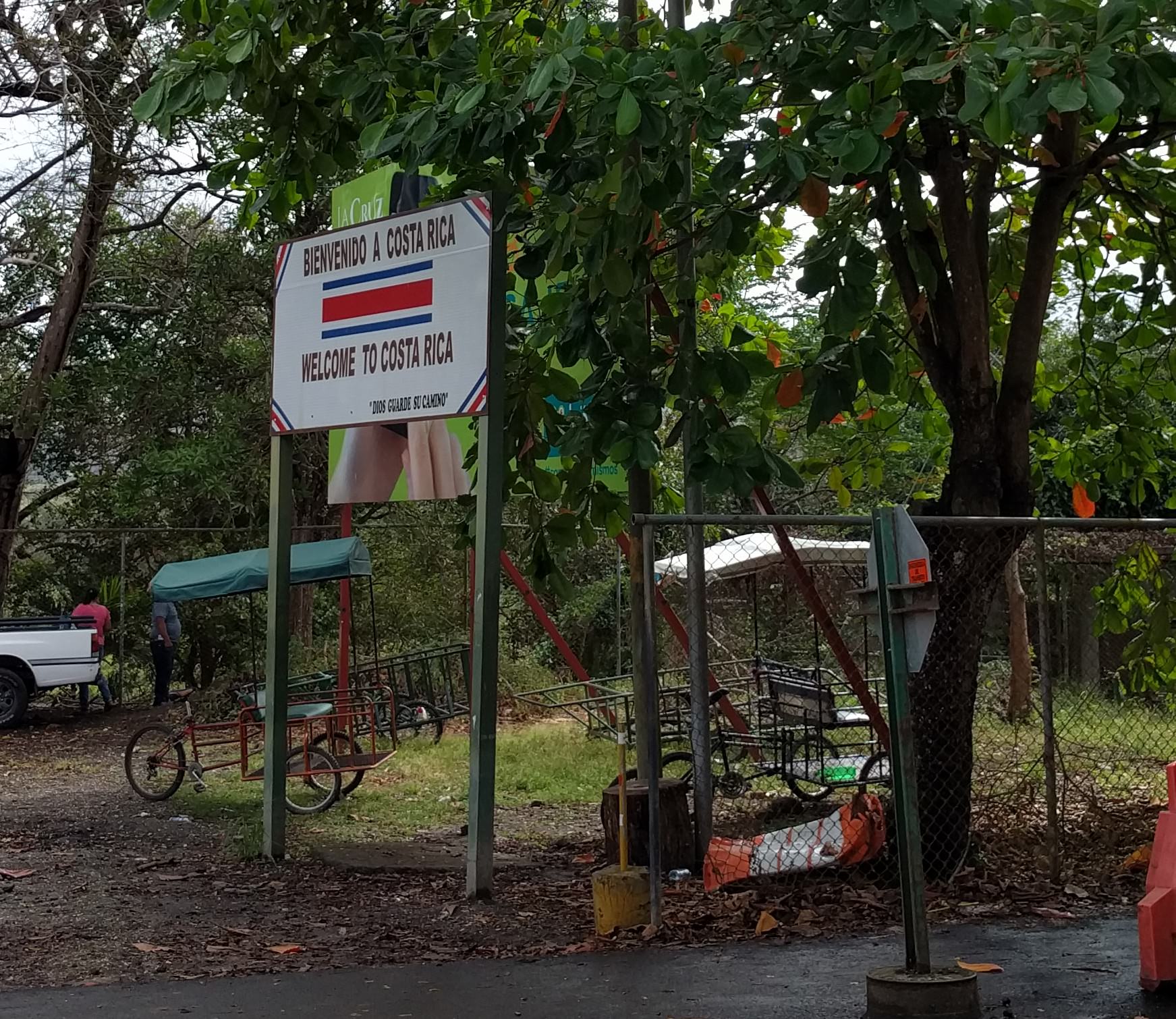 Crossing the border into a song place, Costa Rica (55 of 92), did not excite me too much. However, being done with Nicaraguan borders for the foreseeable future was a huge encouragement.

I followed where the trucks were going and ended up looking at a menacing fumigation chamber. 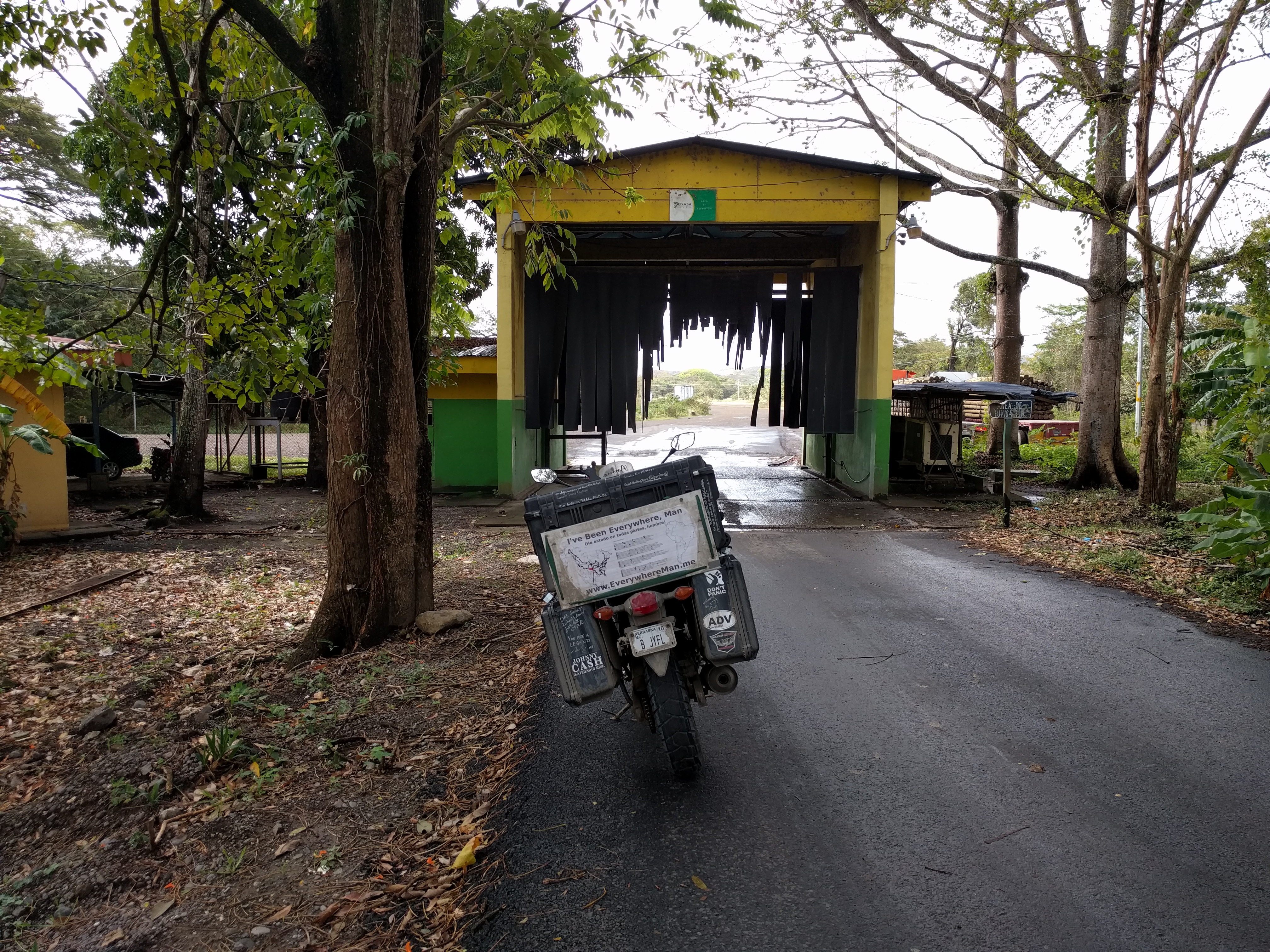 The guys in the office of fumigation hadn’t stopped me, but I decided to walk back and ask them if it was necessary. They directed me to turn around and go back down the other fork in the road.

The Costa Rican migration building was really busy. The line snaked back and forth for at least 30 minutes. 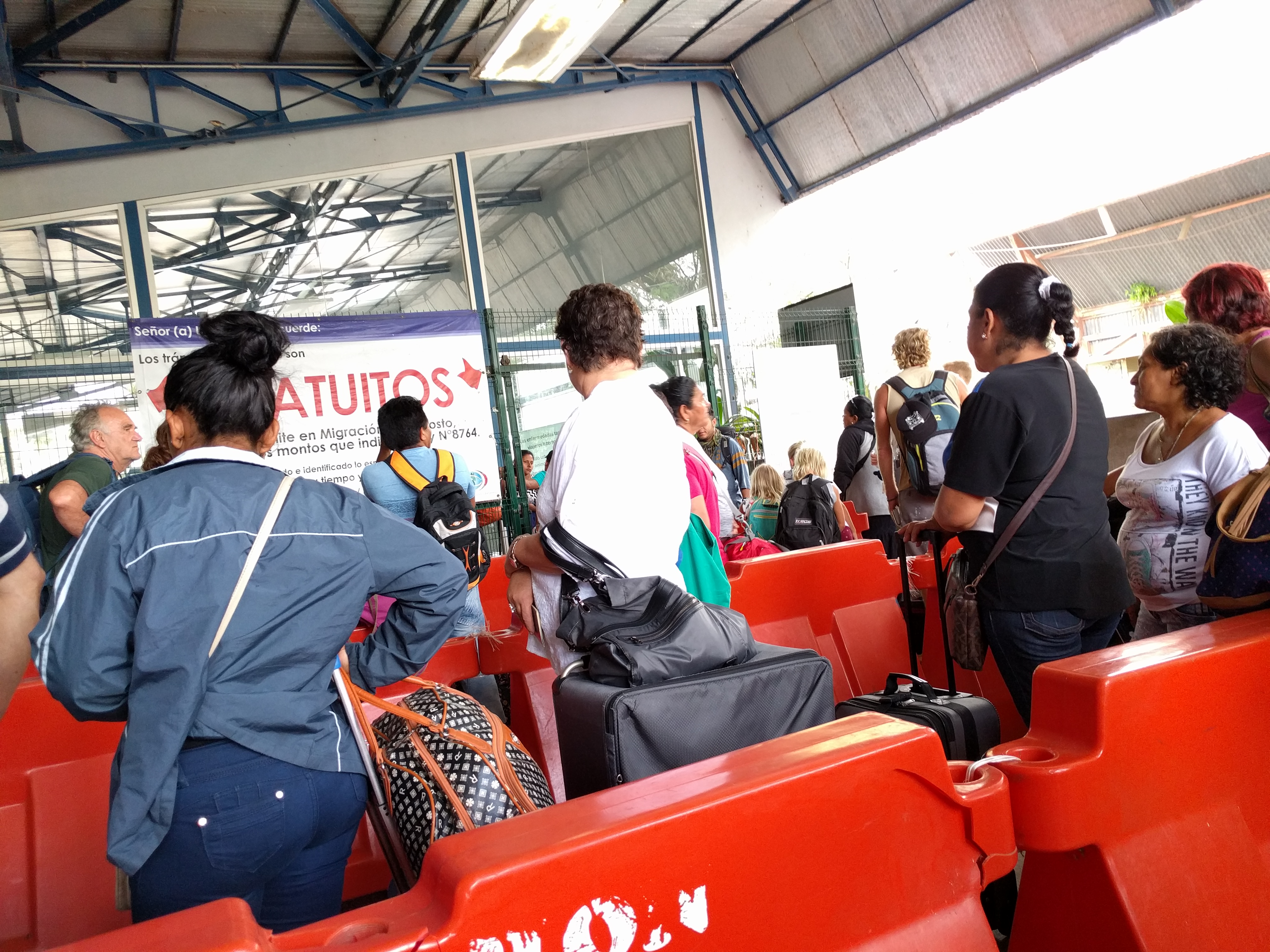 A helper came and whisked a quartet of gringos to the front of the line. I guess I’m getting too much of a tan.

When I reached the front, I was surprised to hear the guy across the counter talk to me in English. I almost didn’t understand him! It was a pleasant surprise.

After getting myself all stamped in, it was Annie’s turn. The Aduana (customs) was right across the street. There were a couple of forms and of course I needed lots of copies. The process was fairly smooth, but I was not done. Now it was time for Aduana 2: Electric Boogaloo.

I made my way to the second Aduana and went inside. 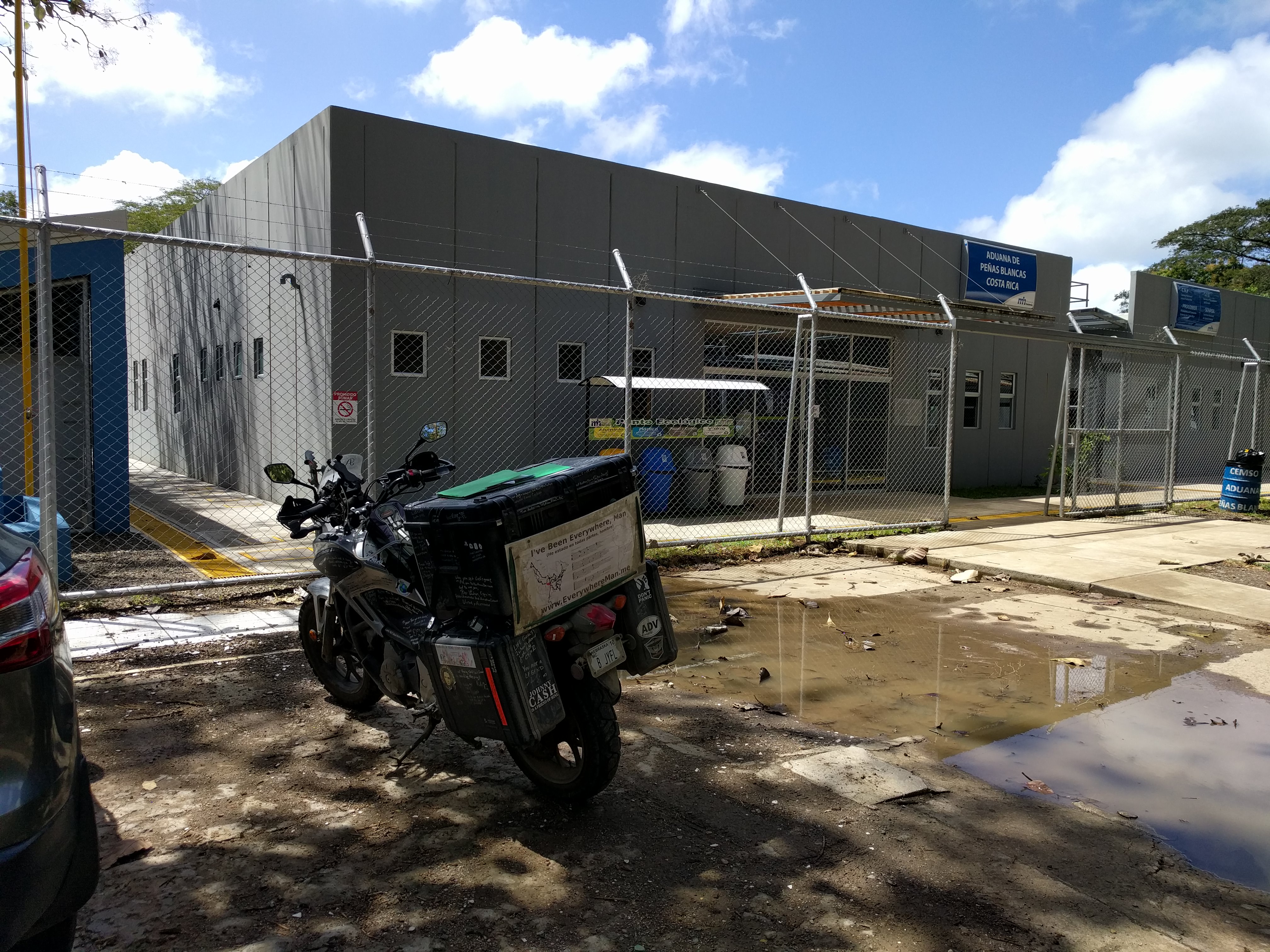 The security guard at the door was really friendly and directed me to the window to buy insurance. They told me their system was down so I waited for about 15 minutes until it was back up. I paid the mandatory $31 to insure Annie.

I had some more forms to fill out at the adjacent window. It was now getting close to lunch time and the staff there were getting antsy. I was the last customer before lunch. They typed up my form, but made an error in Annie’s model number (“NC100X” instead of “NC700X”). I pointed out the error and was given an epic eye roll.

After re-printing it, the lady pushed the paper to me and told me to sign. By the time I finished my signature, the office was empty and the staff were striding out the door. I began to follow, thinking that maybe they needed to inspect the bike but they walked right by.

Thankfully the security guard was still there. He was able to tell me that the form was one that I keep. I didn’t need to turn it in to anyone.

My welcome into Costa Rica was a long line of trucks waiting to enter Nicaragua and an aggressive bus driver.

I’ll leave it there for this time and focus on Costa Rica in my next post. As always, thanks for reading. It means a lot to me that there are so many of you with me on this journey.

Double-check the paperwork, everybody.

Realtime update: Oooofff….I don’t really like this post at all. The tone and the writing aren’t really up to the quality I strive for. I guess I’m just a little off of my game. I’m staying one last night in Costa Rica and will attempt my final Central American border crossing tomorrow. Panama here we come.