Despite some current frustrations, it is always a special experience to set foot in a new continent for the first time. In this post, we finish up our time in Panama City, get interviewed by a new friend and take a ride in one of them newfangled flyin’ contraptions.

Realtime update: I’m going to lead with it this time. The frustration with the shipping process continues to intensify. They told us that we would finally be able to get the vehicles today, but it has now been changed to Monday instead. We’ve been told things that are not true so many times throughout this circus. I’m trying to stay positive about the situation, but I wasn’t planning on a whole extra week without Annie.

(We’re still in Panama City, having just dropped off Annie the previous day.)

This evening, I made a new friend. Now that’s not something that is usually too out of the ordinary on the trip, but this friend is going to become part of the story for awhile so he deserves a bit of an introduction. 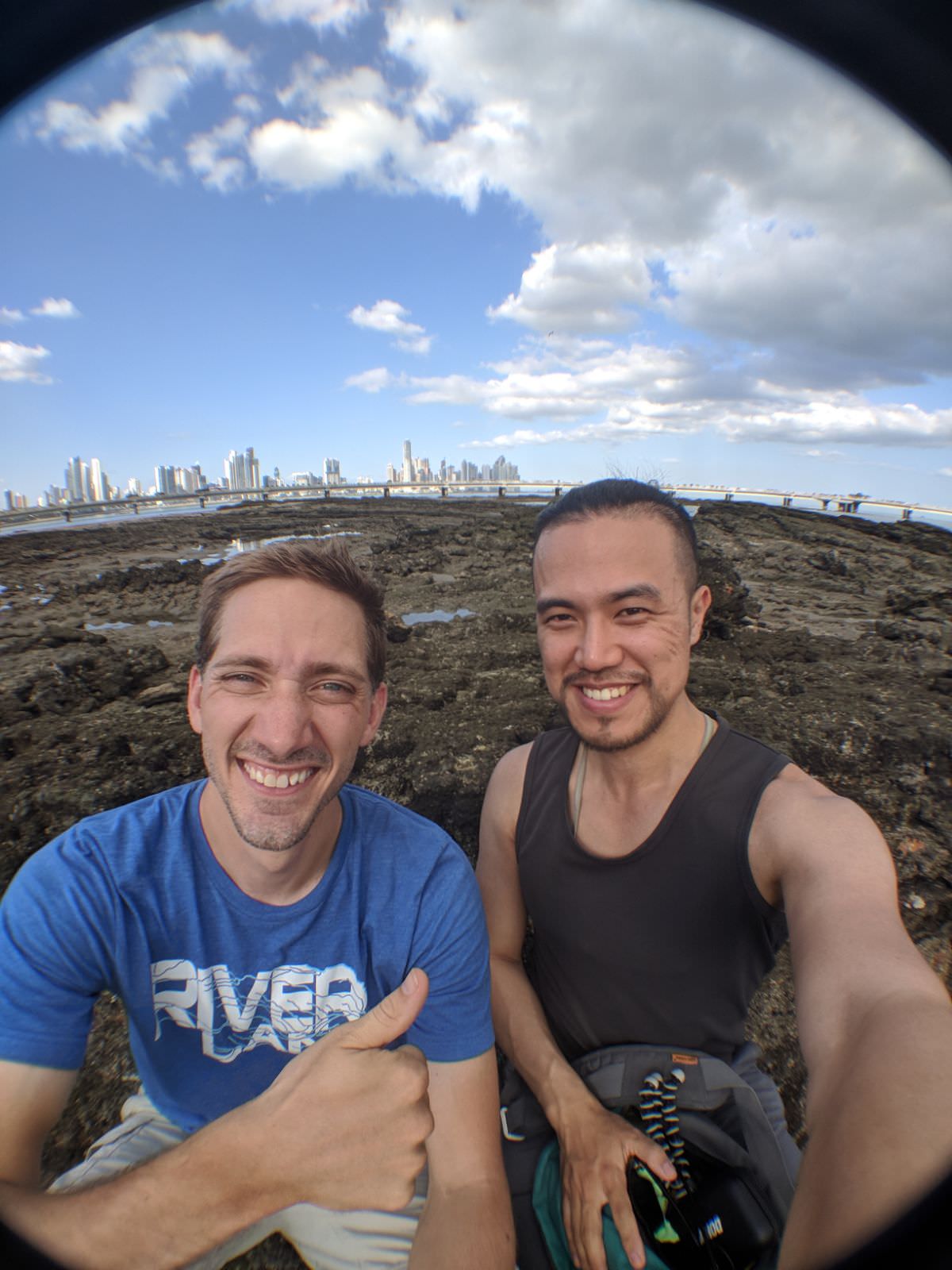 Leebong and I are two peas in a pod. Shortly after he checked in to Hostal Amador, we began to recognize the vast number of similarities that we share. We are both scientifically minded, but share a deep desire to understand our world in a comprehensive manner.

He has been travelling for about five months in a Ford Transit car and we actually crossed into Mexico on the exact same day. He lived in Paraguay for over two years while a member of the Korean version of the Peace Corps., so he speaks excellent Spanish. He has also lived in the US since he went to MIT to get his Master’s degree. He is a true citizen of the planet.

His blog is called “Listening to the World.” One of the things he does is interview people he meets on his journey, both locals and other travelers. He already has some amazing stories, so I would strongly recommend visiting his site. He even recently interviewed this crazy guy on a motorcycle from Nebraska.

Perhaps the most comforting thing about our encounter was that he was the first fellow traveler I have met that also carries three phones. We are both a bit “tech-y.” 🙂

We went out that evening with another new friend, John. He is an Englishman, currently residing in Texas who came to Panama to check out a sailboat. 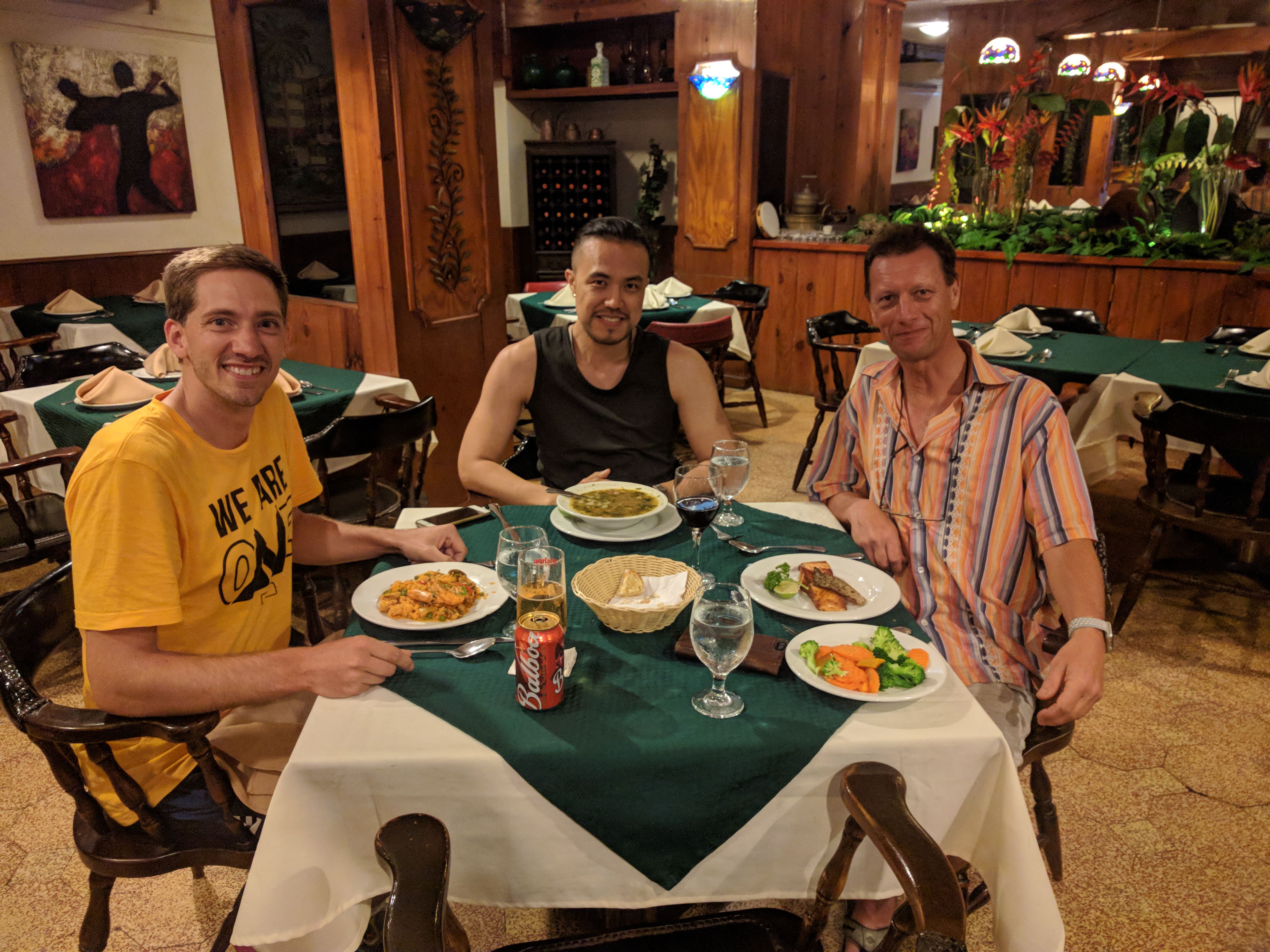 I splurged ($15!) on a dish I had been wanting to try: Paella. This is a seafood dish full of all sorts of nautical creatures: Shrimp, little octopi, clams…who knows what else. 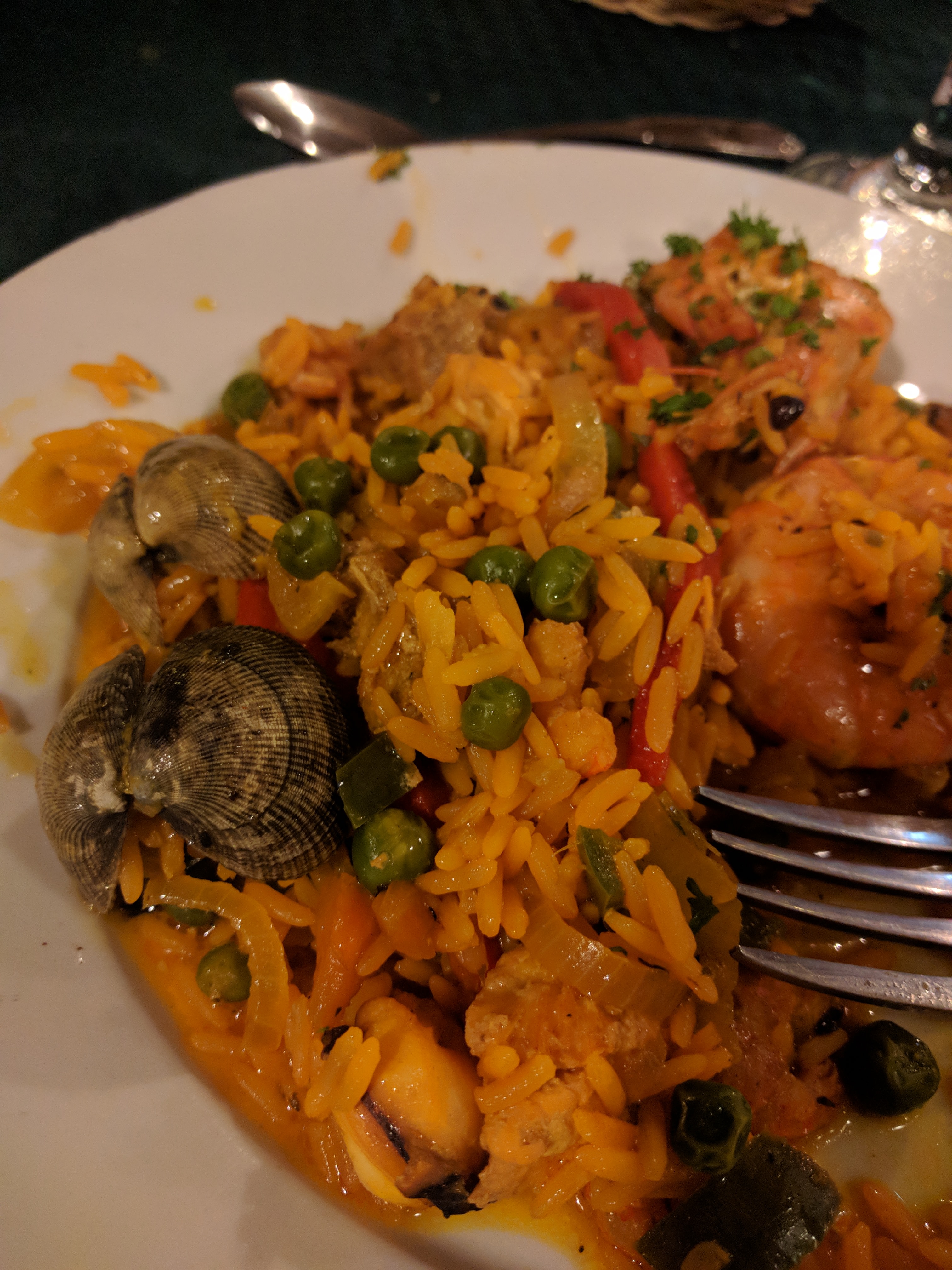 Leebong and I had a lot of great conversations and were continually finding more things that we had in common. Meeting someone like him was a real treat, if for no reason than to take my mind off of not having my bike.

I did some more walking around the neighborhood which was now becoming like home to me. 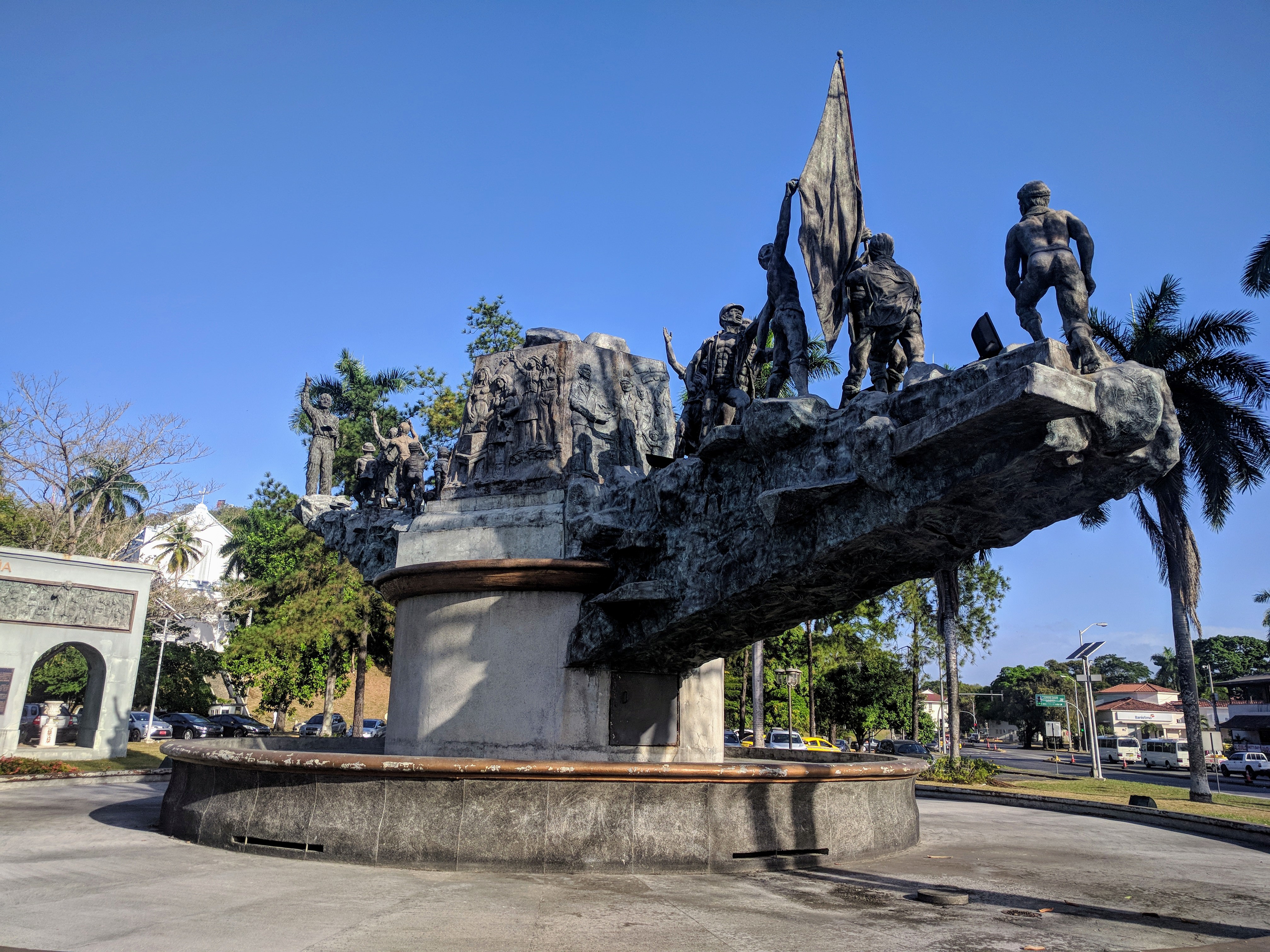 There are still lots of echoes of the American days. This dilapidated YMCA is apparently going to be converted to a supermarket soon. 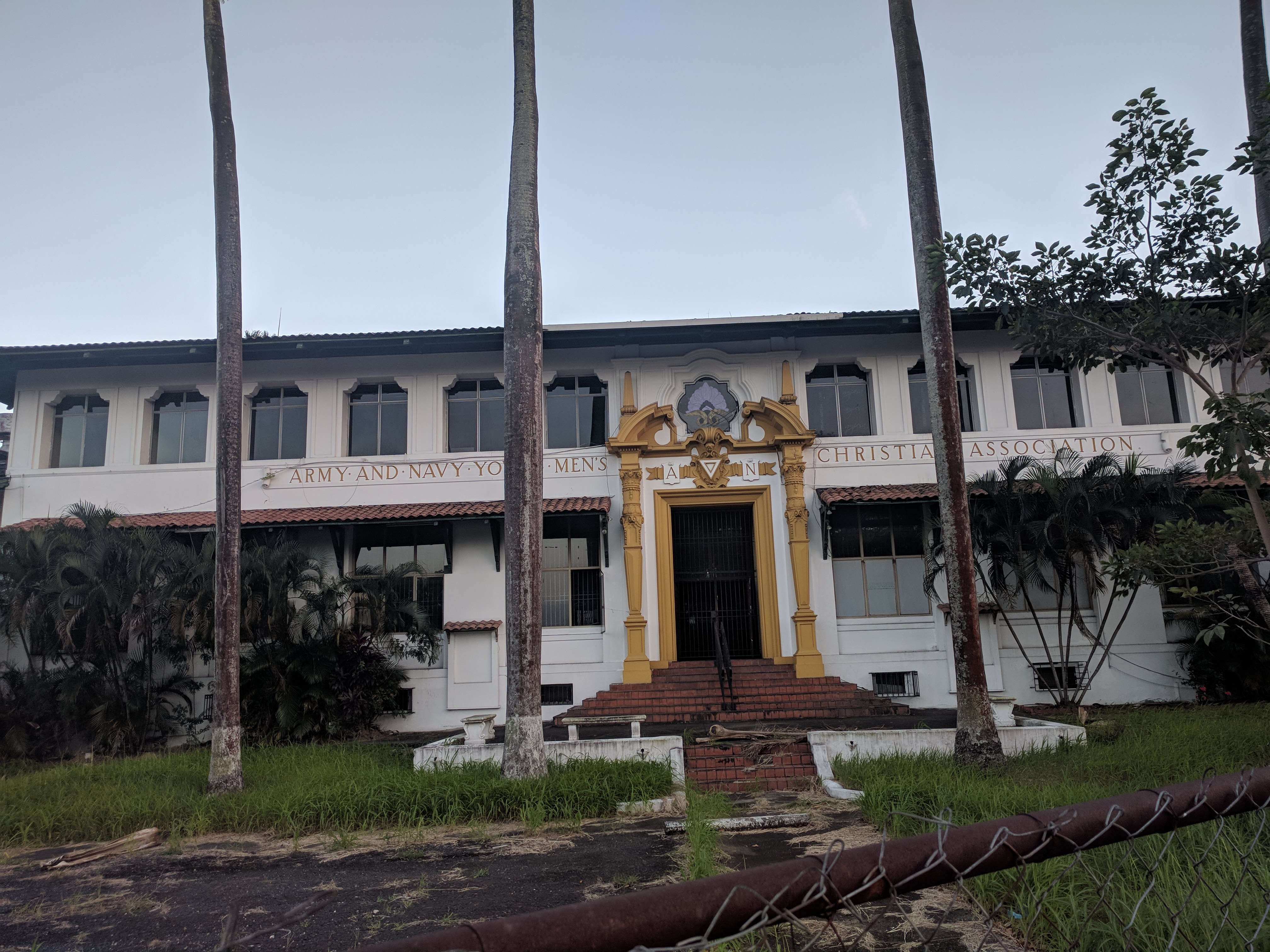 The staff at the hostel were all wonderful, but I kind of want to mention at least one person: My new friend Felipe. He both works and lives at the hostel and was one of the people that made my stay at Hostal Amador excellent. He always had a great attitude and was super helpful. 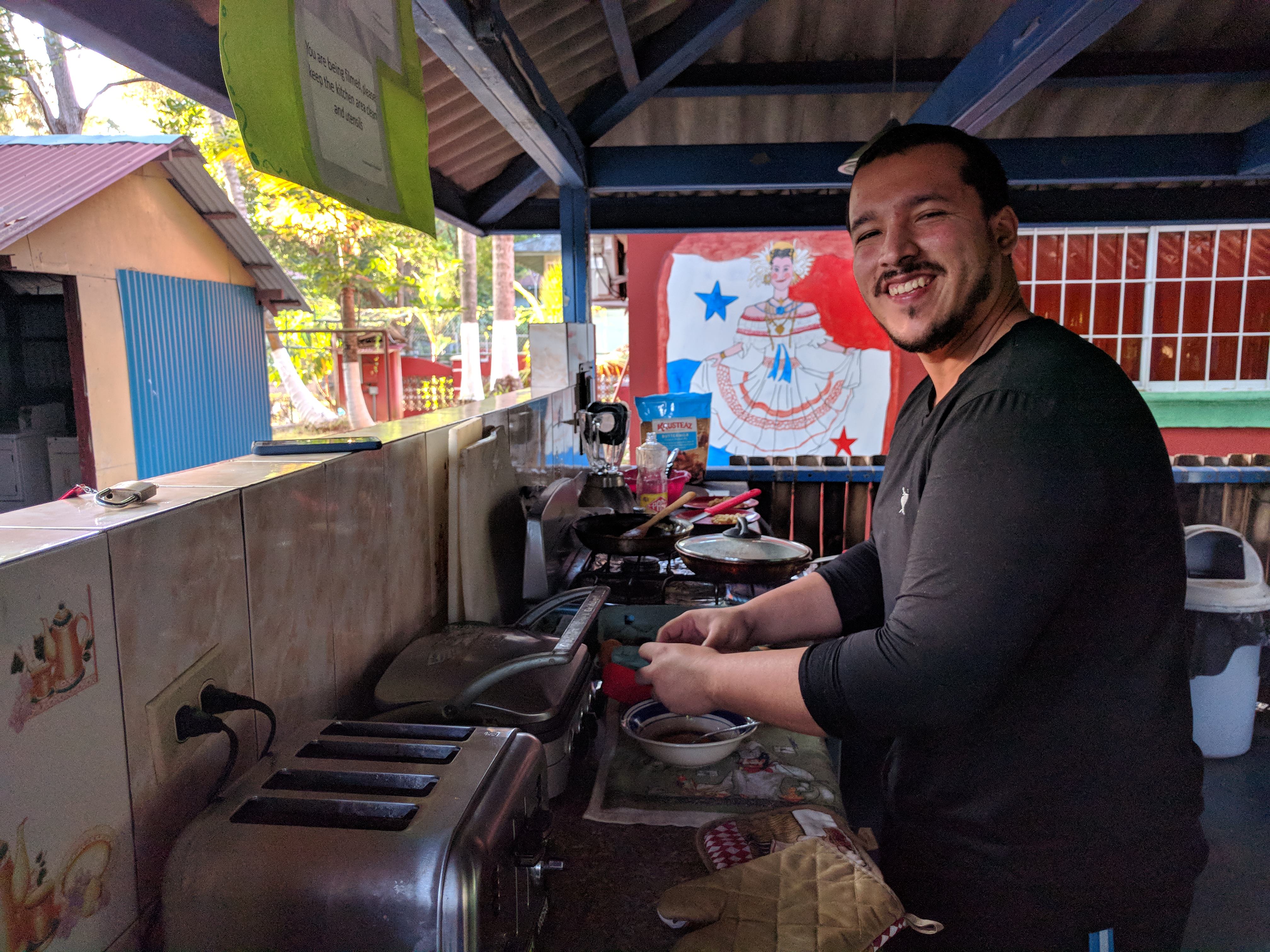 He was one of the few people in Panama to sign Annie. (This picture is from earlier, obviously. I just didn’t want to go a full post without a picture of Annie.) 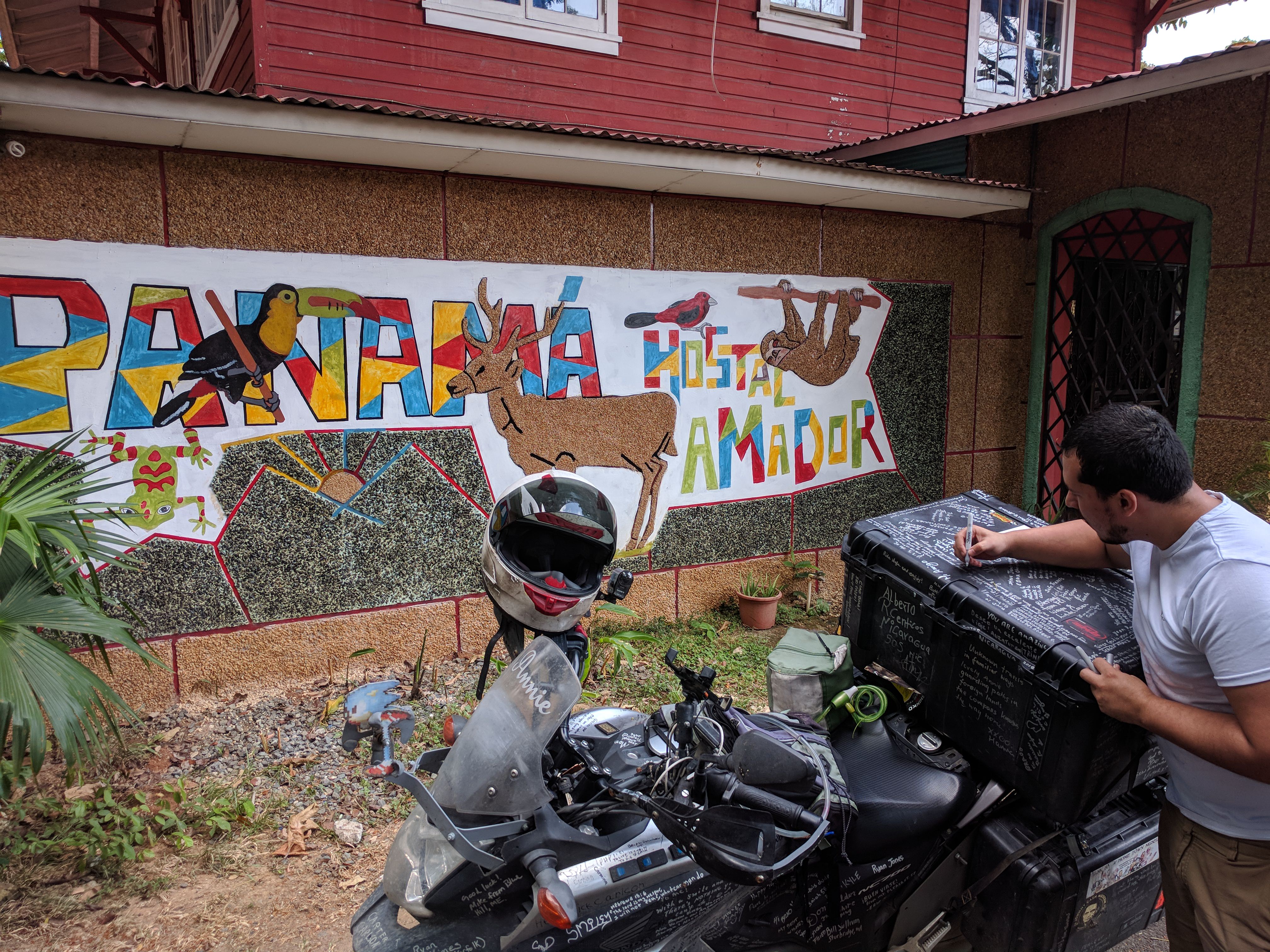 Leebong and I decided to go out and see some more of the city. I had been in Panama City for a number of days, but all of that time had been spent on the shipping process. Our first stop was at the Miraflores locks of the Panama Canal. I got to ride in an Uber for the first time in my life. How fancy!

I’m going to do a quick run-down about the canal. If you are one of those people with no appreciation for history, please feel free to skip ahead. 🙂

The history of this spectacular waterway that connects the Atlantic and Pacific Oceans almost reads like a Hollywood script. The French were the fist ones to take a stab at it, beginning their effort in 1881. Their goal was to make a passage way which was completely at sea level. This proved to be too ambitious of a task. Additionally, their workers were ill-prepared for the challenges of the jungle terrain. By 1884, diseases were killing over 200 workers per month.

In 1903, US President Teddy Roosevelt basically decided that the US was going to build the canal, regardless of any local opposition. At this time, Panama was actually a part of the nation of Colombia. After the Colombian government refused the US’s proposal, Roosevelt changed tact, actively working for Panama to become an independent country.

Just three days after Panama declared its independence, the US was granted sovereignty over the area of the canal. I don’t imagine that the Colombian government was too pleased about how this all played out.

Despite the spurious political dealings, one has to marvel at the engineering execution which brought the canal into existence. Instead of following the French plan of a sea level canal, an artificial lake was created that sits 85ft above sea level. This meant that locks had to be constructed on both ends to raise and lower ships. It blows my mind to think about the logistics of this construction.

Complete control of the canal was given to Panama in 1999, but American influence is still visible all around the canal area. I will leave it to the historians to debate whether or not this is a positive effect.

Visiting the locks is kind of a gamble. They do not post the schedule of passing ships publicly, so you just have to roll the dice. Fortunately, Leebong and I arrived at the perfect time. First, we got to see a boat pass through the far locks. 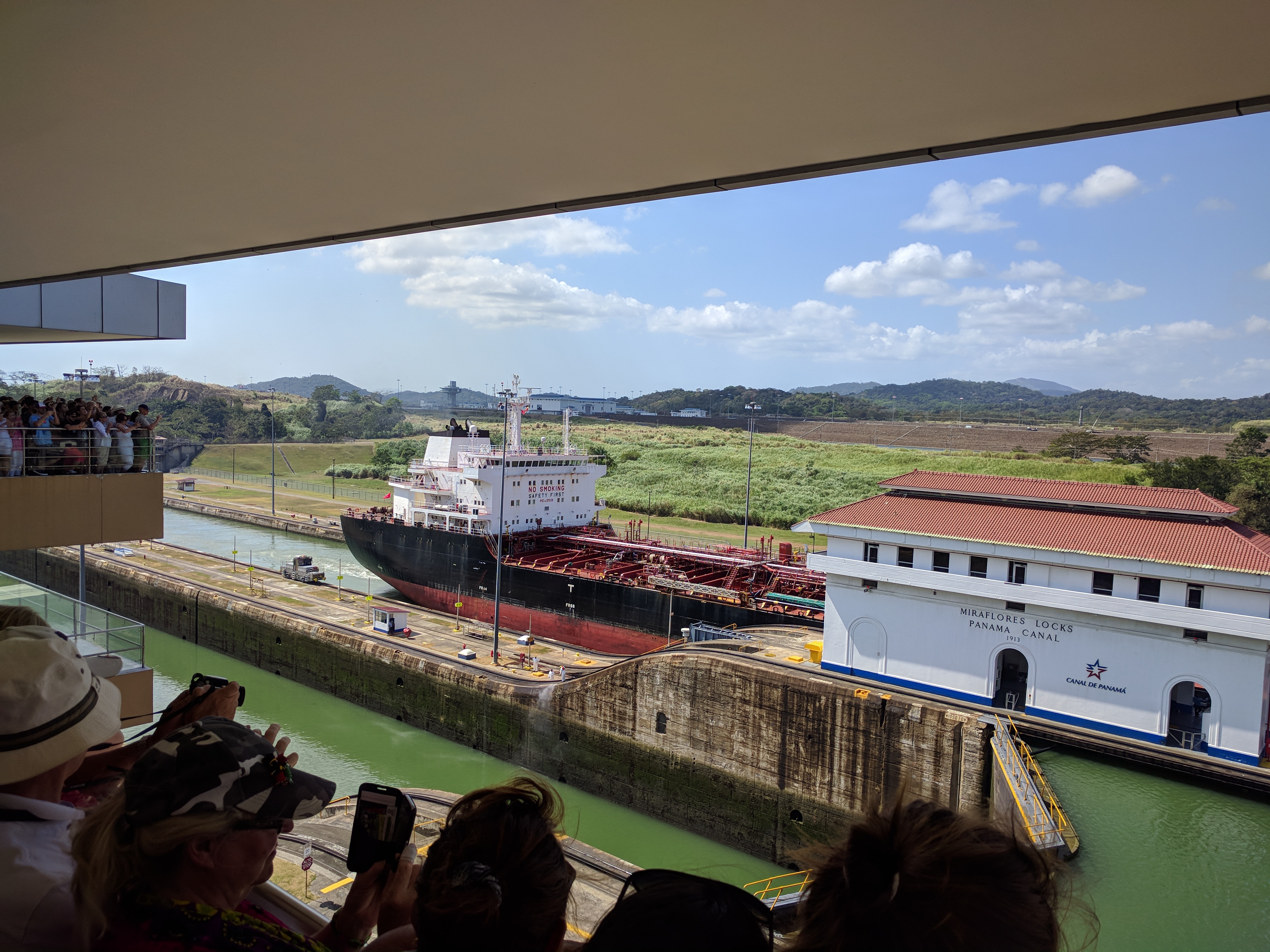 I knew there might be an opportunity for my “official” Panama picture, so I brought a prop along. 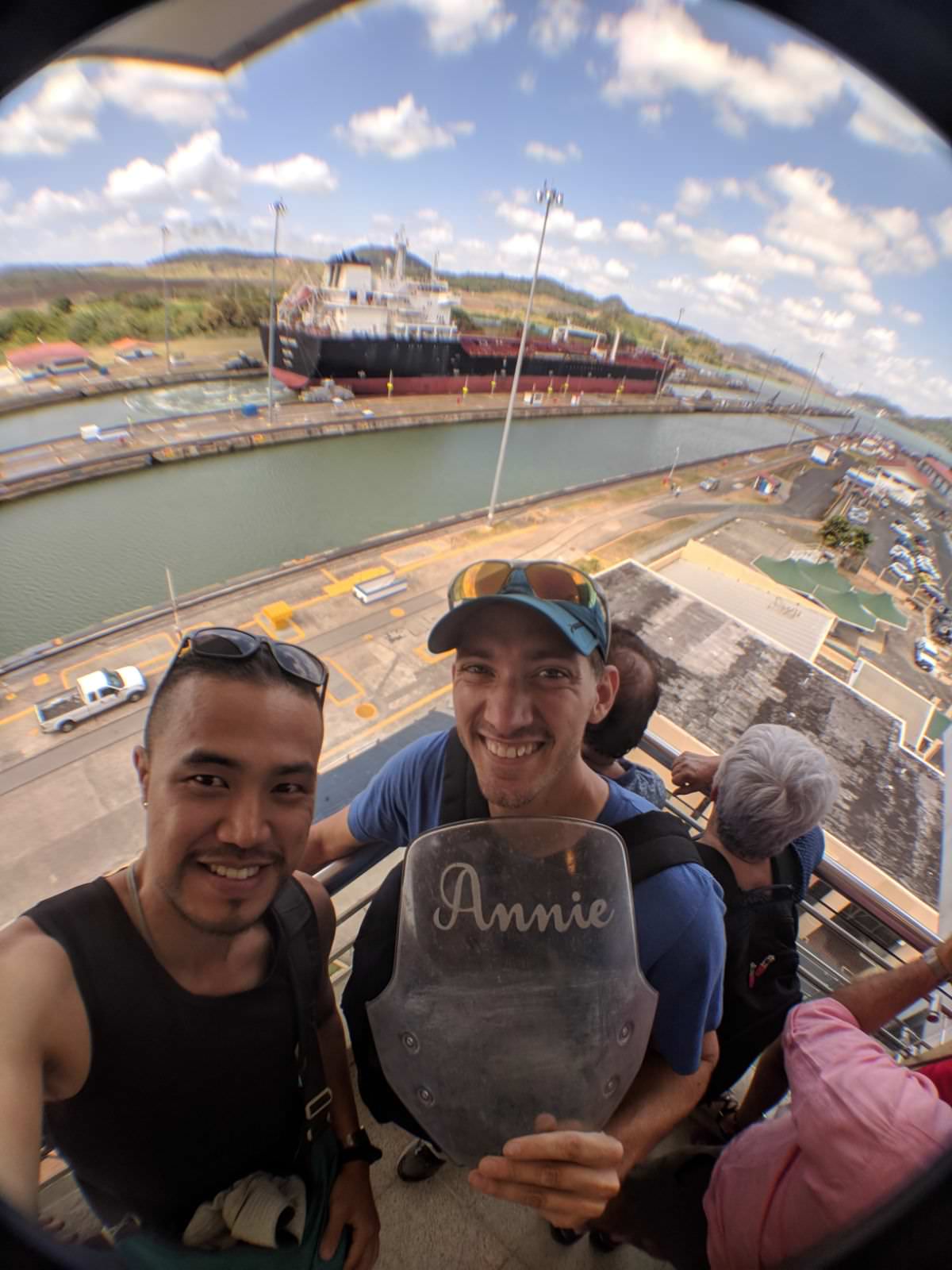 No, I’m not calling Leebong a prop…I mean the windshield. 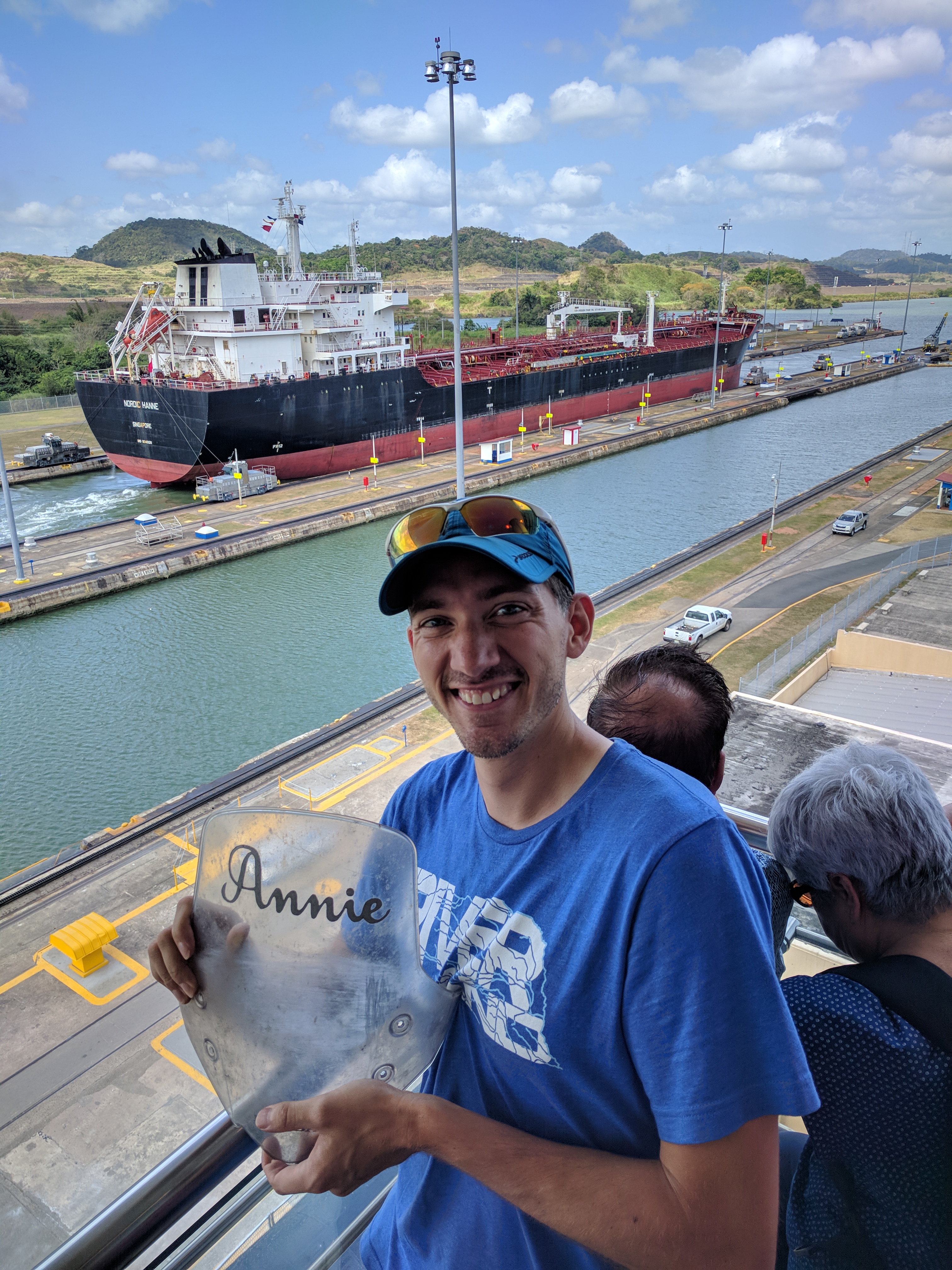 But our luck had not run out. Another huge ship passed right after in the near locks. These were actually the last two ships of the day. 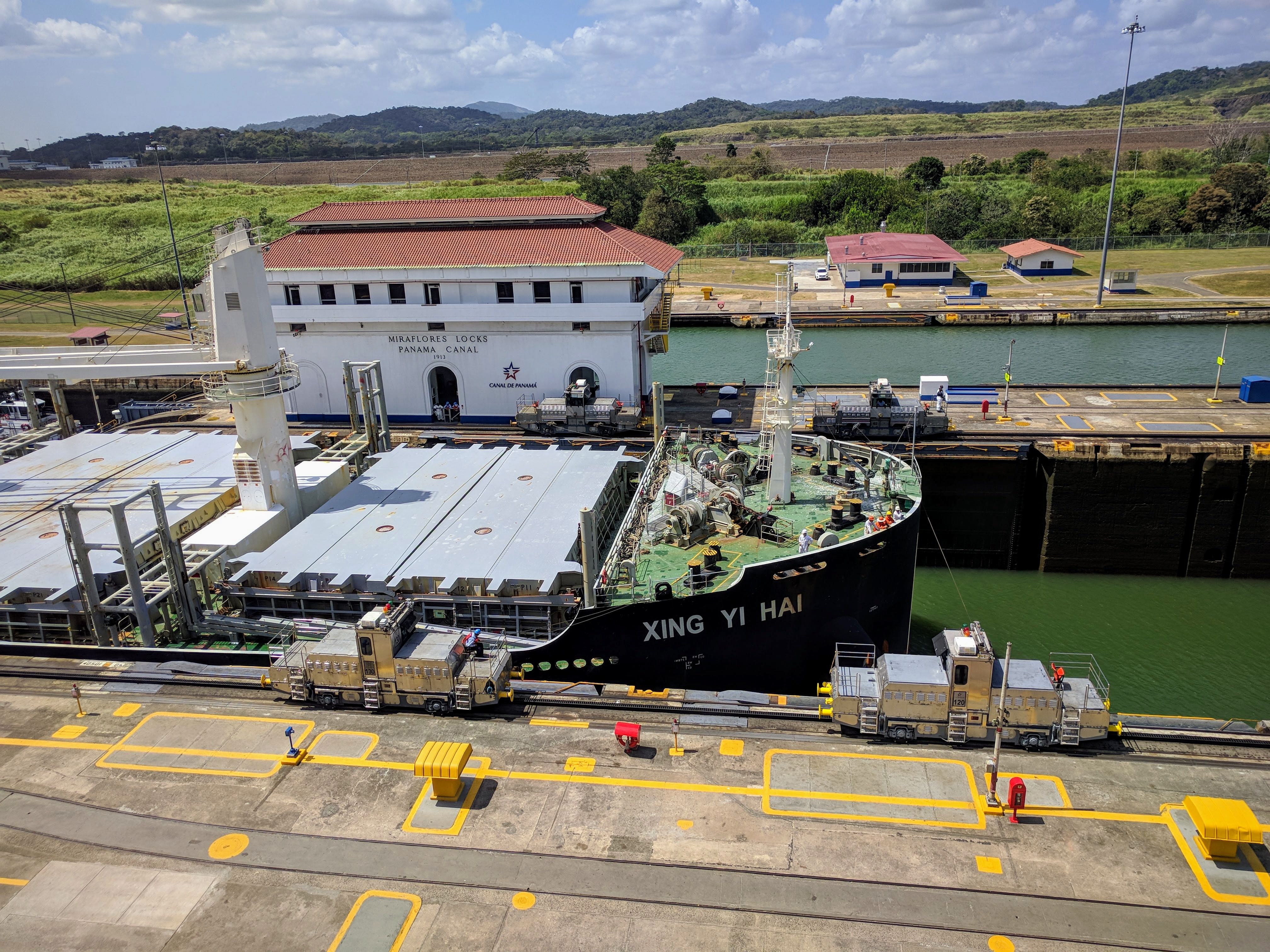 Those little cars are what keep the ship from hitting the sides. 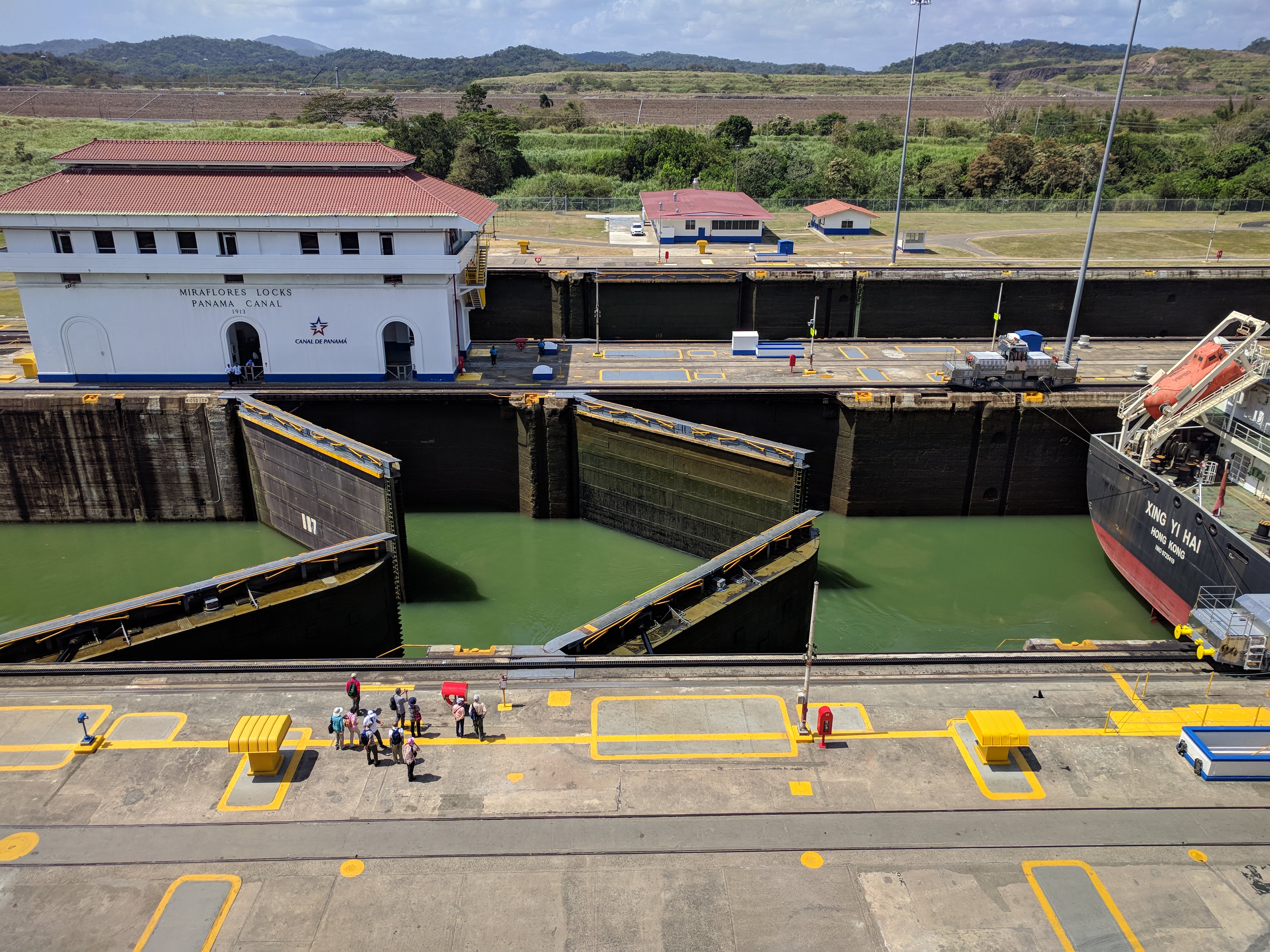 There was also a museum type area with a lot of nice information. The entry fee was $15, but this is sort of a “must do” experience in Panama. Perhaps it should be noted that newer, larger locks have been built, but there is no visitor center for them (yet?). These were “small” ships.

We continued on to Casco Viejo (the old city) to look around. I was sort of confused since “casco” is the same word used for motorcycle helmet. In this case it means “quarter” or “center.” It can also be used for the hoof of an animal, the hull of a ship, or even headphones. Talk about a versatile word! 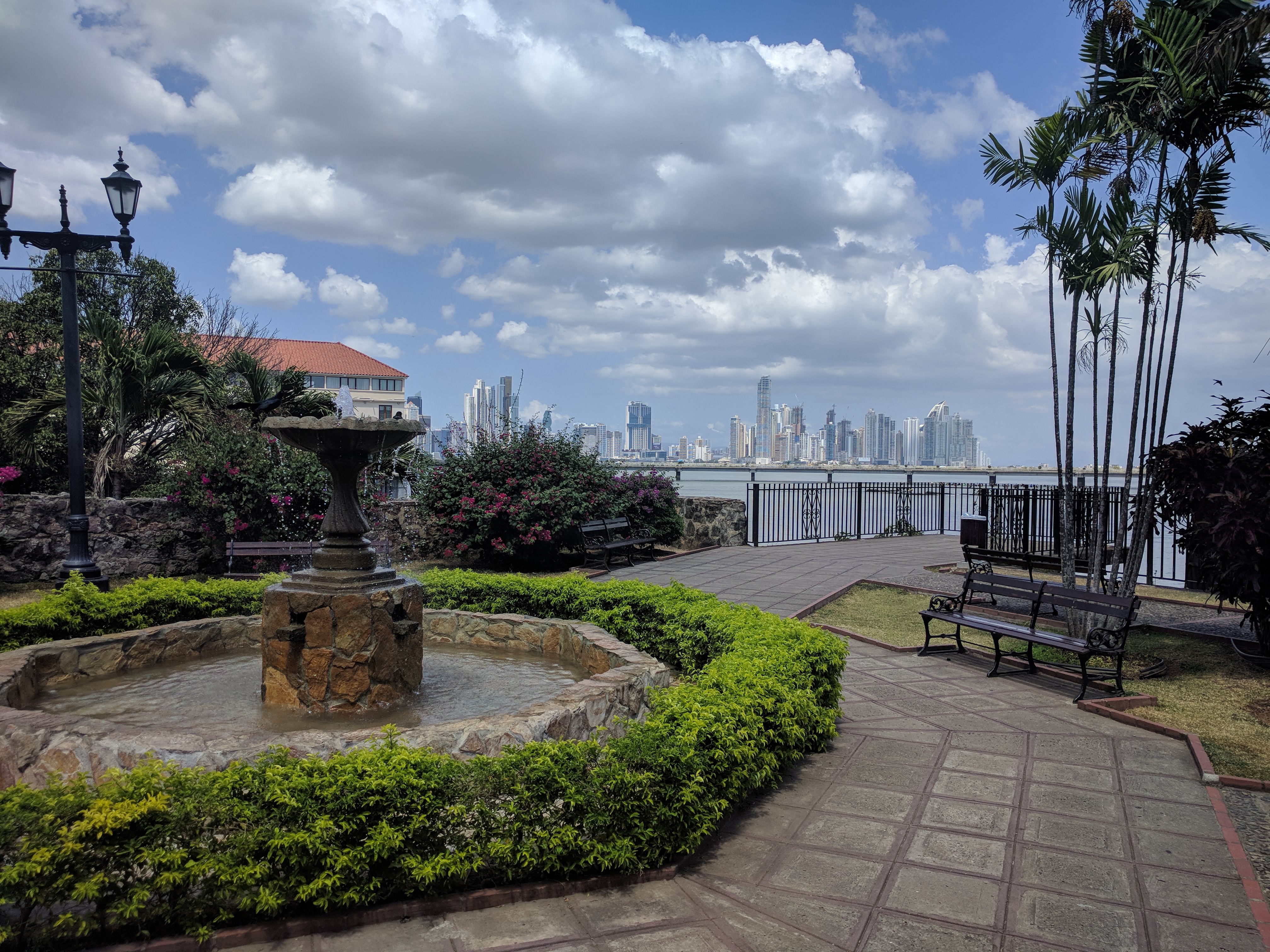 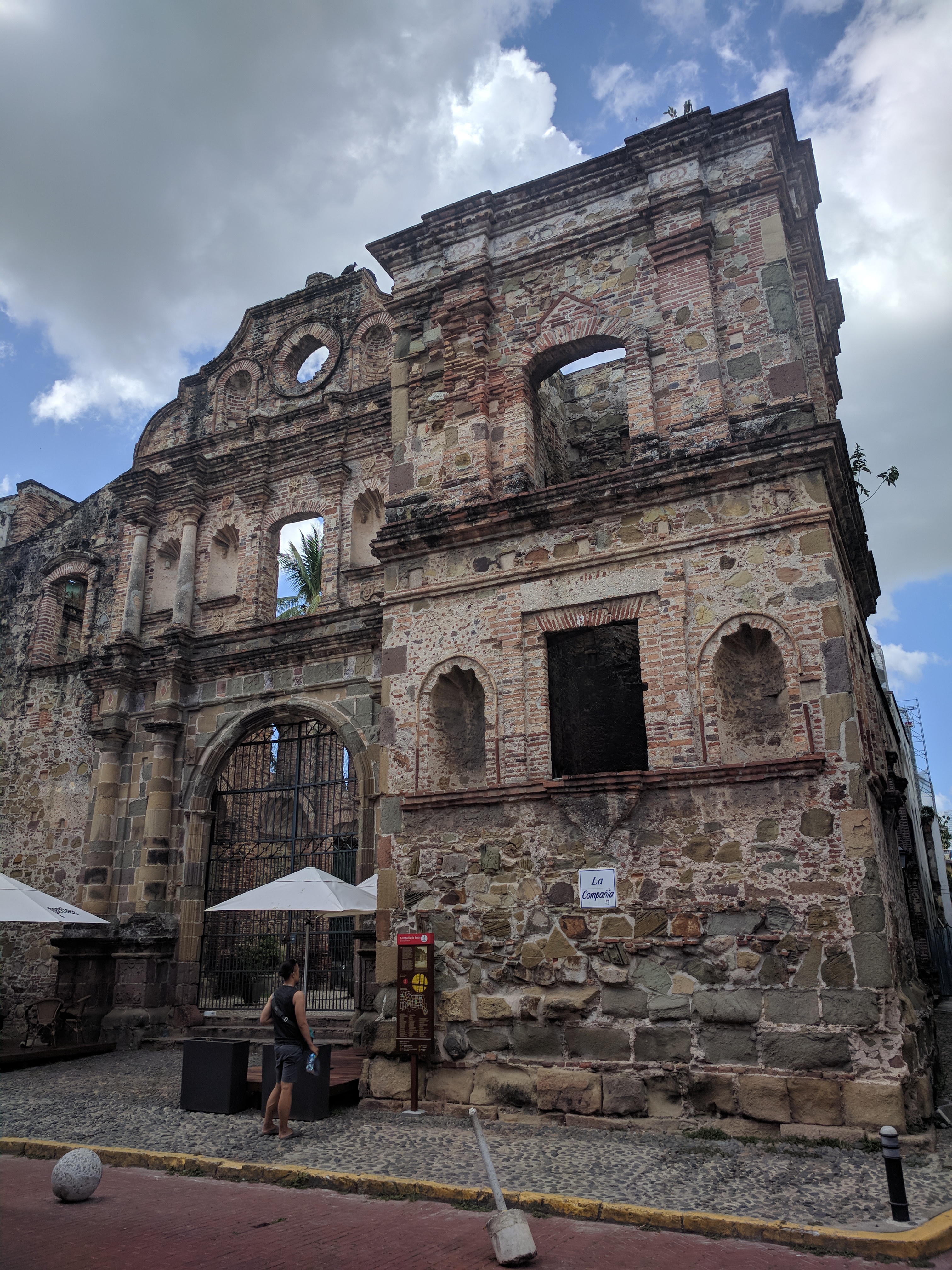 There were lots of expensive lunch options, but we found a Chinese place for just a few bucks. 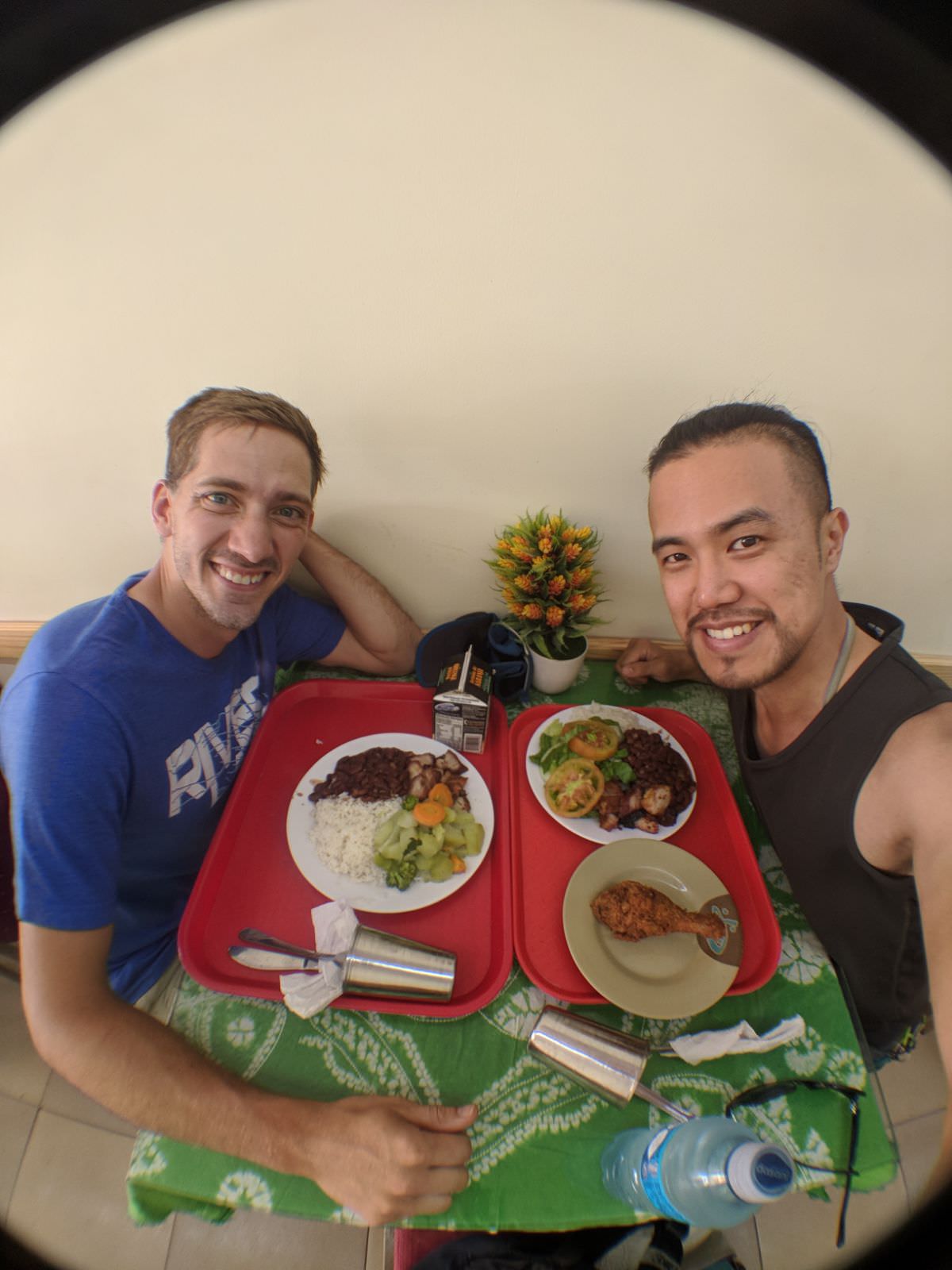 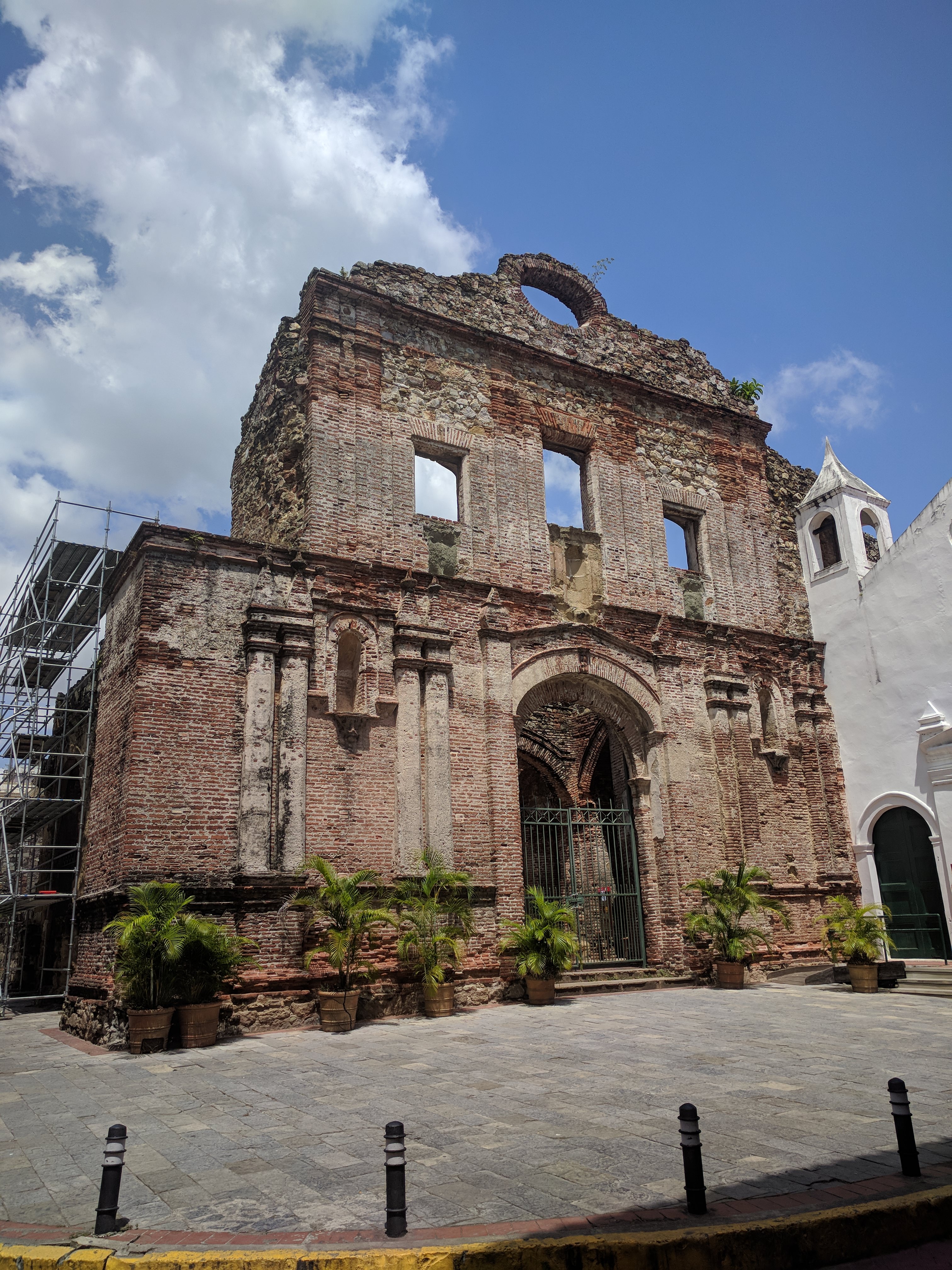 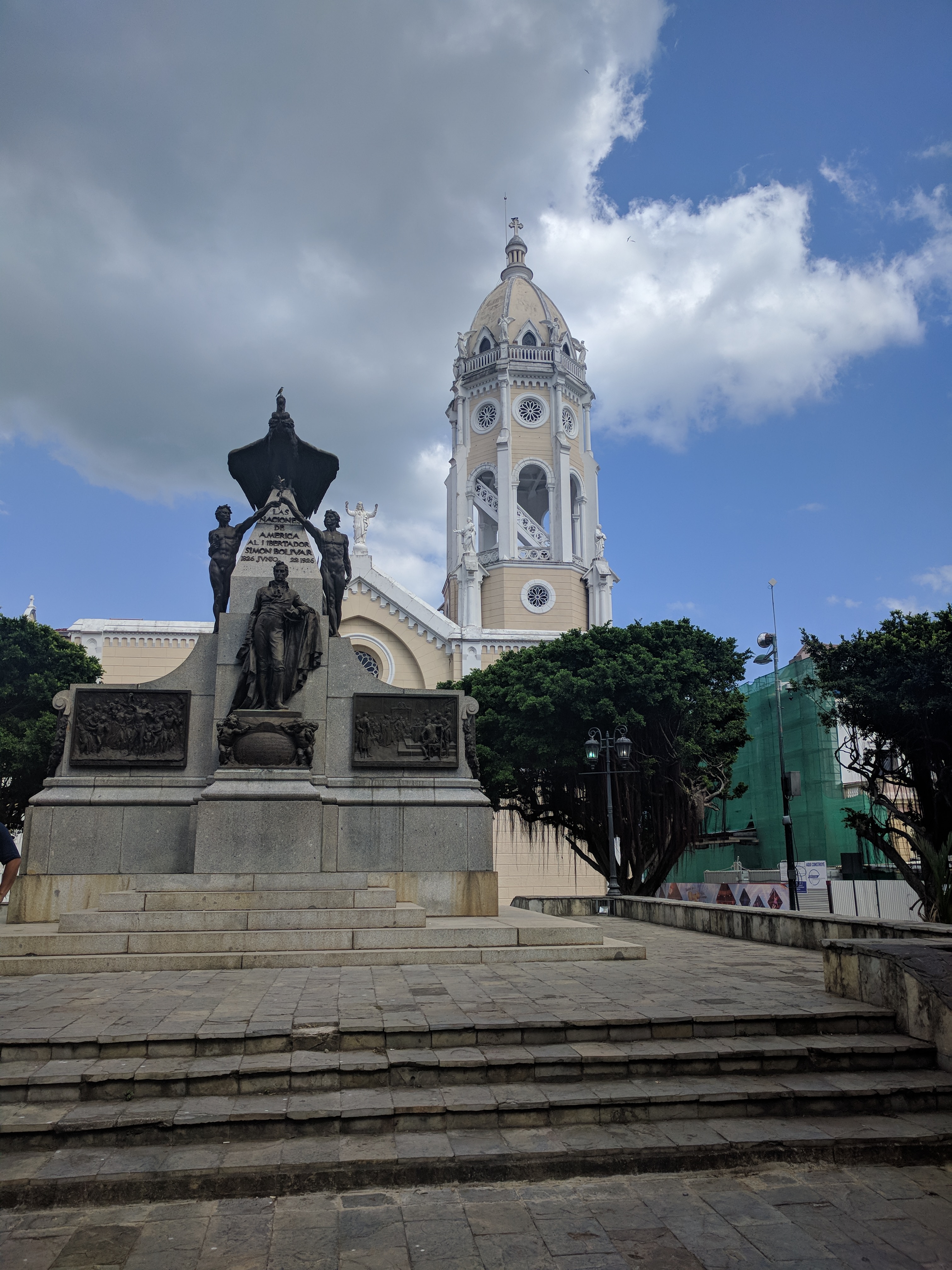 Leebong had asked to interview me for his website. I referred him to my agent who handles my public appearances. After intense negotiation, it was decided that I would do the interview for free. I think I need to hire a better agent.

In all honesty, though, I felt honored that he asked. He had some great questions for me and I tried to answer as candidly as possible.

Though we are both travel with multiple tripods (yes, we are nerds) they were in our respective vehicles. Leebong actually held the camera in his outstretched hand, only stopping a couple of times to rest his shoulder muscles. 🙂 It was a neat spot.

Leebong and I split up and I decided to walk back to the hostel. It was about three miles and I passed through some neighborhoods which did not feel the safest. 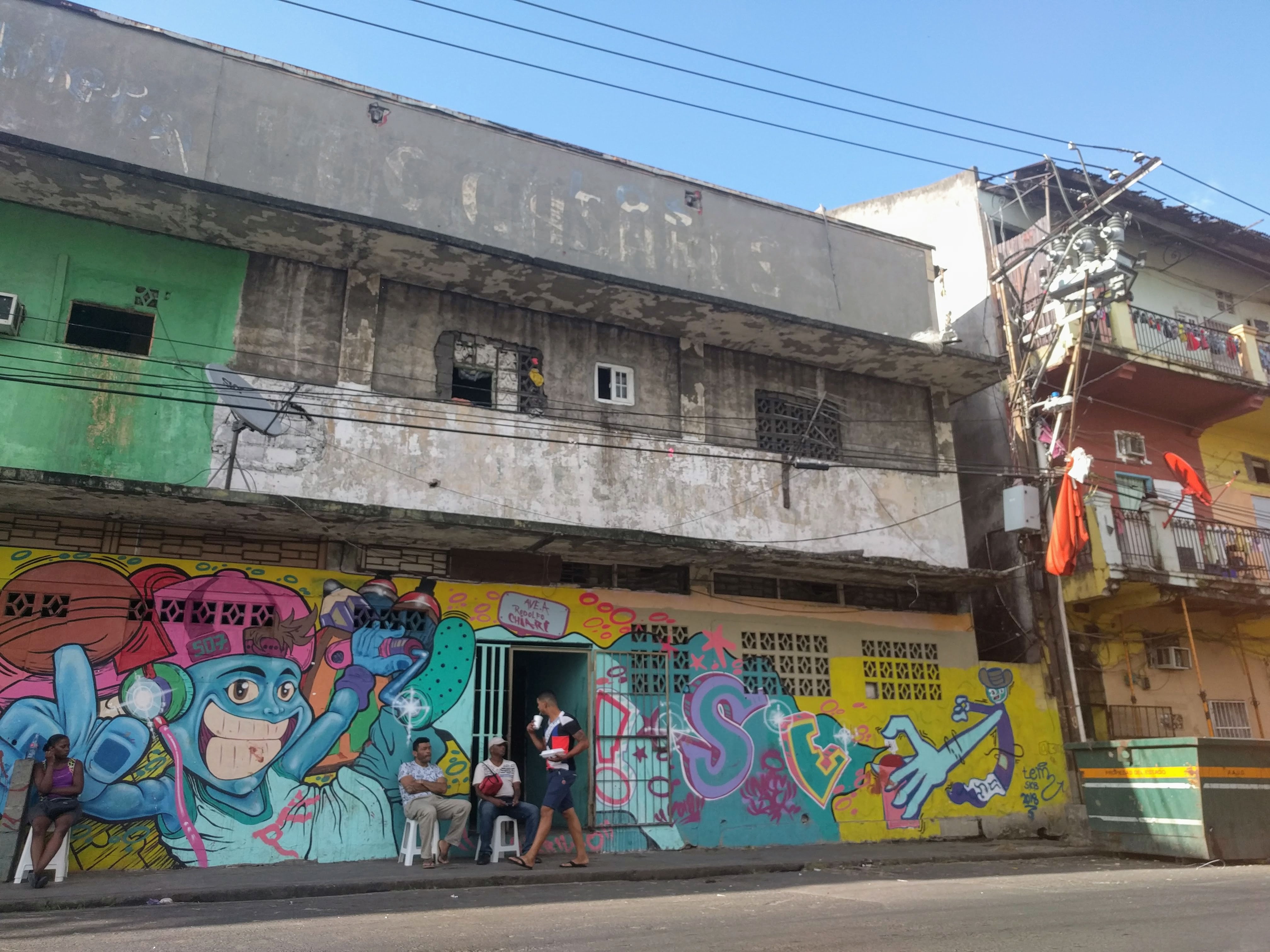 Being that this was the my final day in Central America, I thought about how embarrassing it would be to get robbed on my last day in the isthmus. I walked quickly and kept an eye out behind me, making it back to my hostel with no issues.

Only one other time in my life have I woken up knowing that I would visit a new continent for the first time. Today would be the day I would set foot in South America.

My flight was at noon, so I had a little bit of time around Hostal Amador. I had such a great time here. I can’t begin to say how much work was completed in this room: 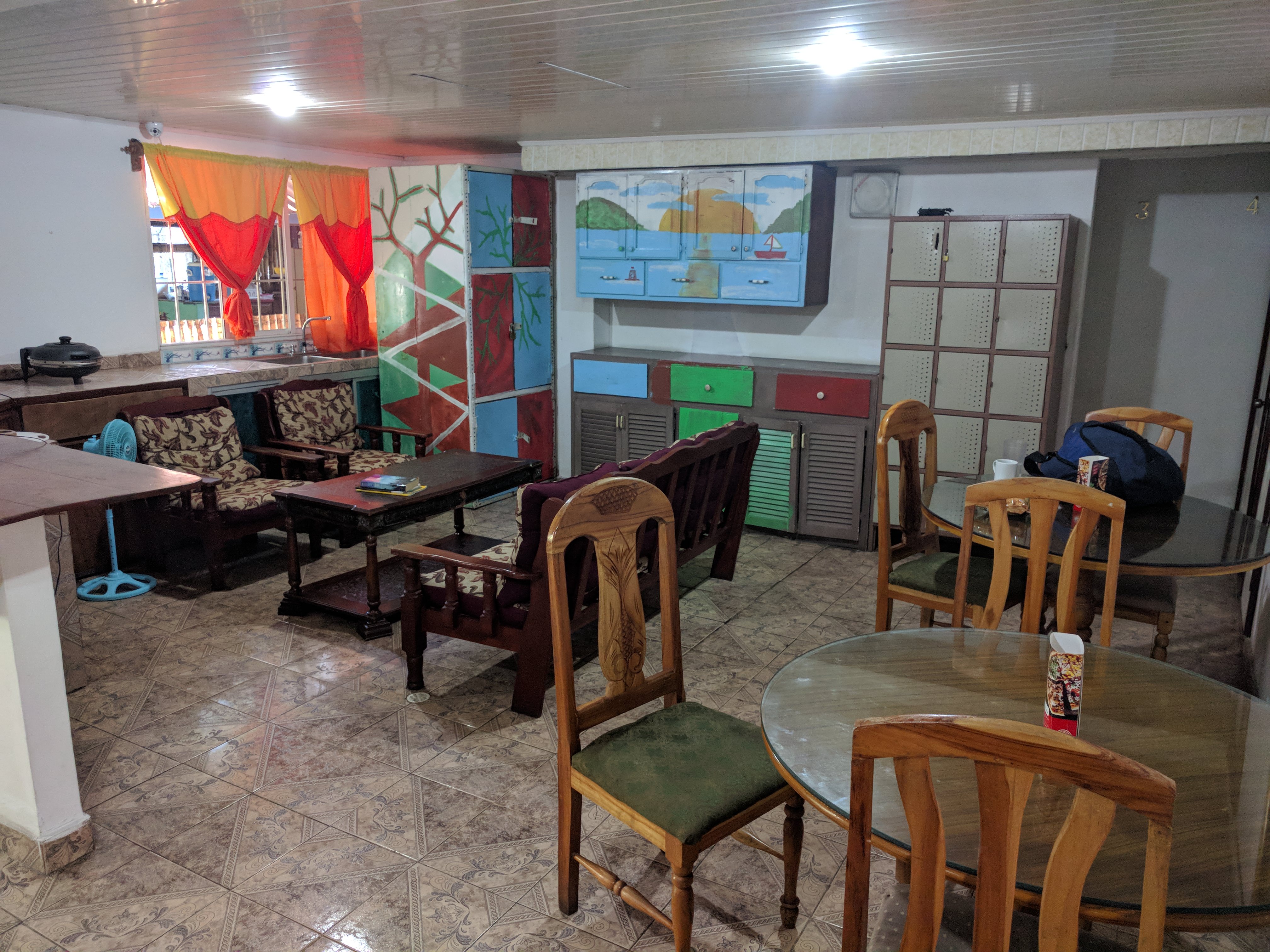 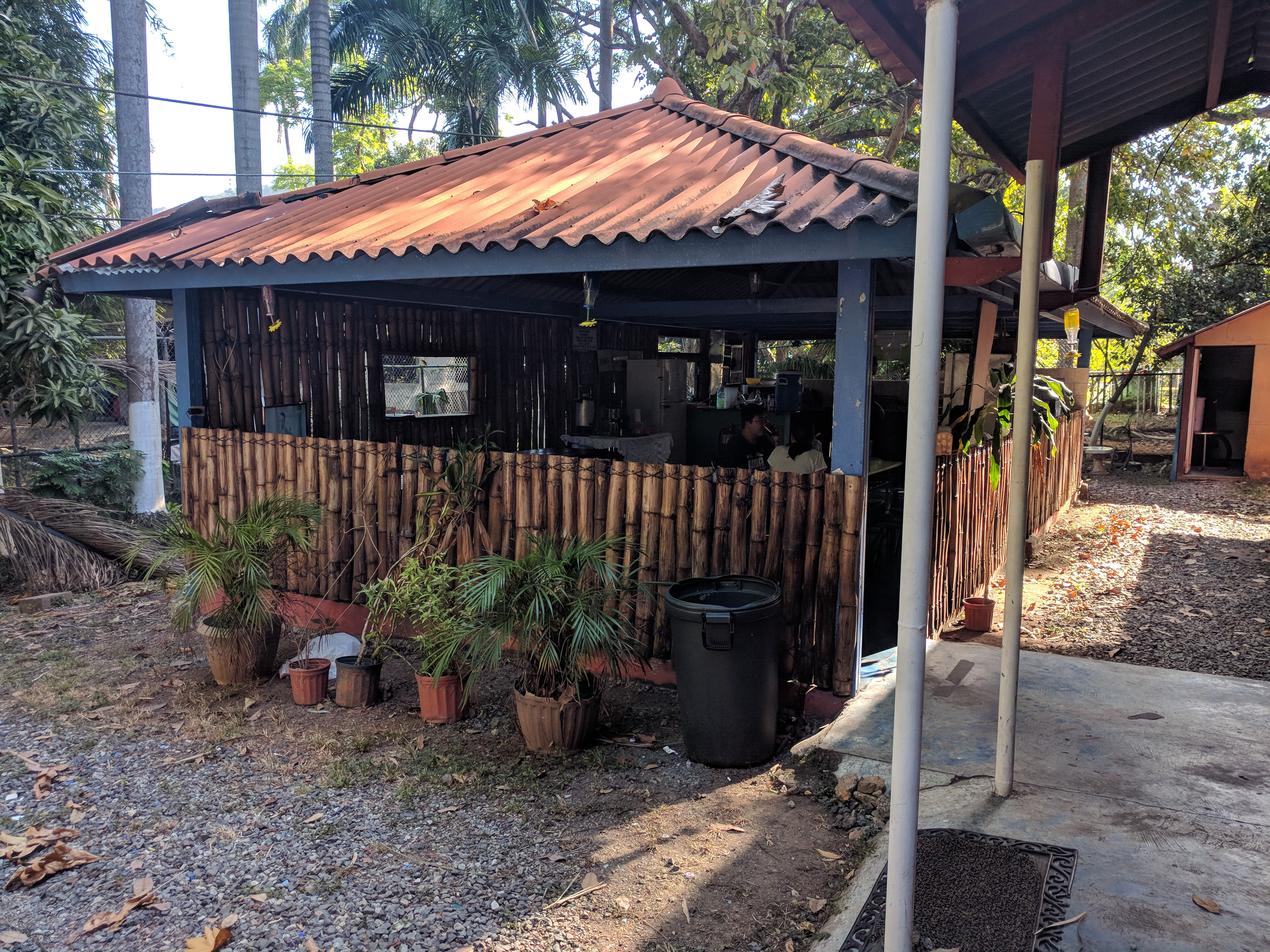 The previous night, I noticed an error: I had not left my can-opener in Annie. I didn’t think that flying with it was a possibility. This was actually one of the first items I purchased on the trip, back in Watson Lake, Yukon. Getting rid of it was kind of hard. 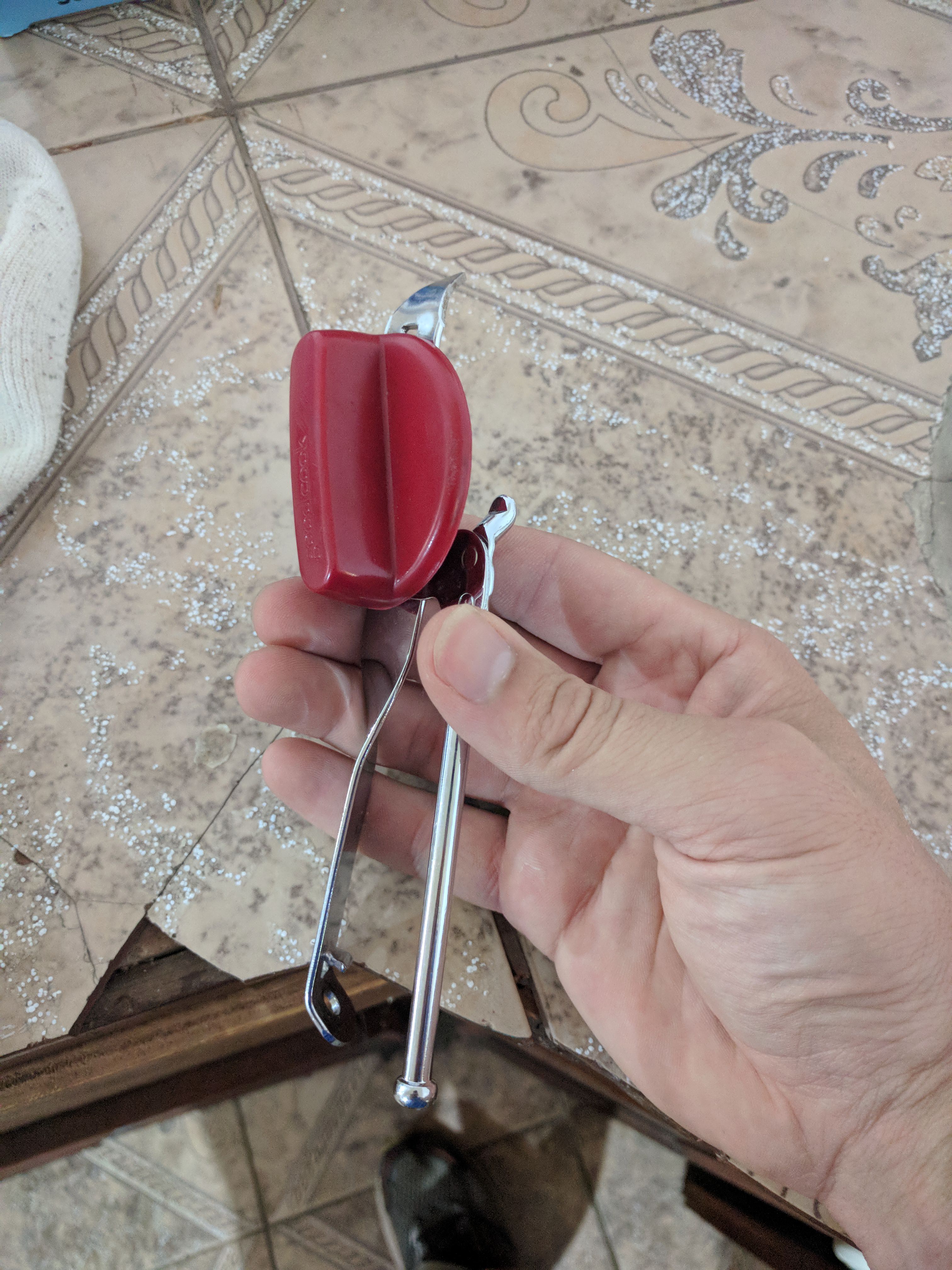 But I didn’t really get rid of it. I stashed it somewhere in case I come back this way. Perhaps I’m too sentimental. 🙂

I walked about 2.5 miles with my bulging backpack, arriving at the airport 2.5 hours before my departure time. On the way, I finally got a good picture of the badonkadonk crosswalk signs in Panama. 🙂 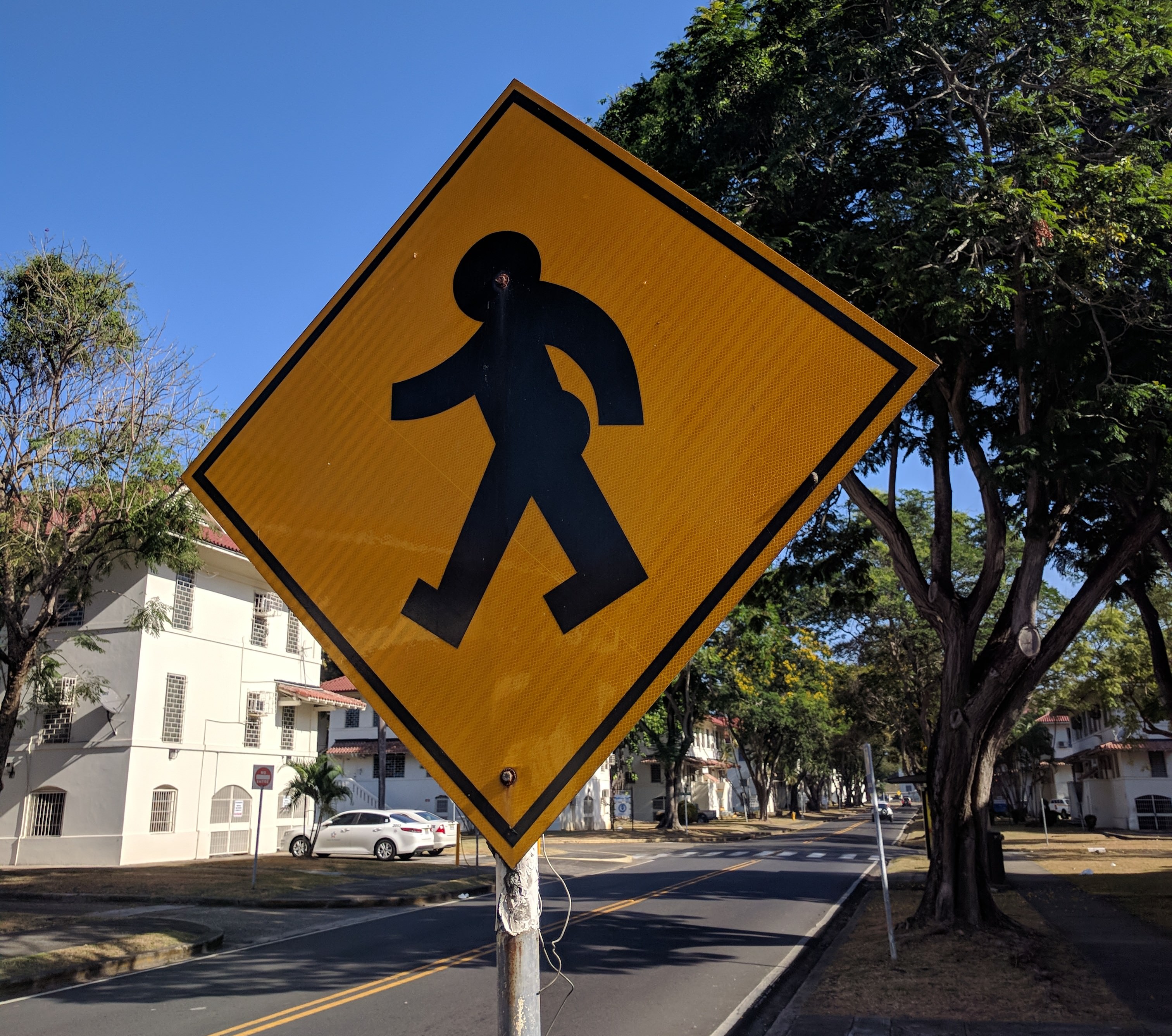 I had a nice chat with a gal from Leipzig, Germany (Marin, I believe) whom I had met at the hostel.

I did my best to not be frightening as I boarded the plane. 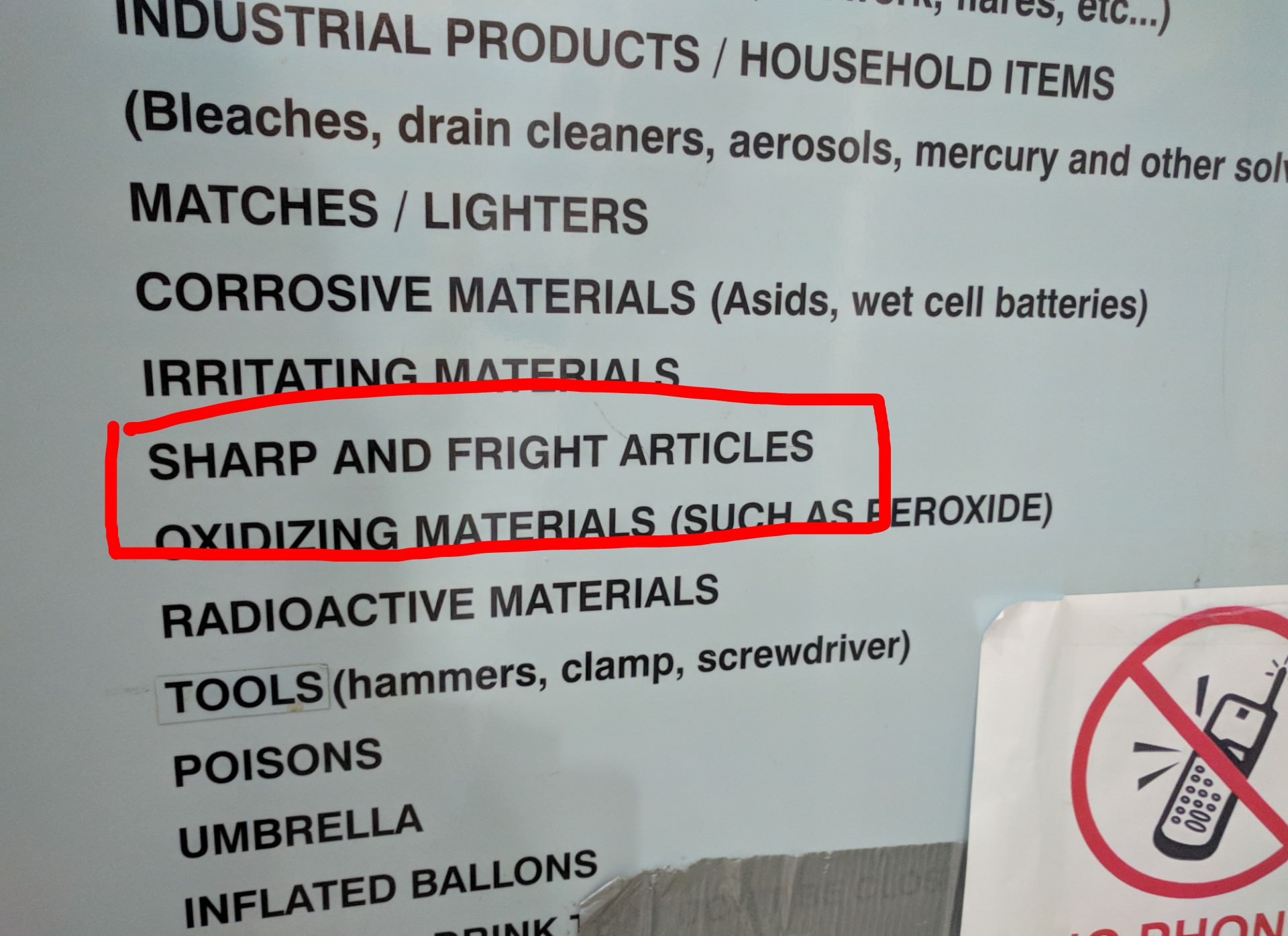 I was impressed with the airline, Air Panama. We took off five minutes early. For me, flying is still a big deal. Even though I have visited 47 states and 23 countries (yes, I’m counting Vatican City), I’ve only flown somewhere six times. It is still magical to me. I don’t know why everybody acts like it is no big deal. 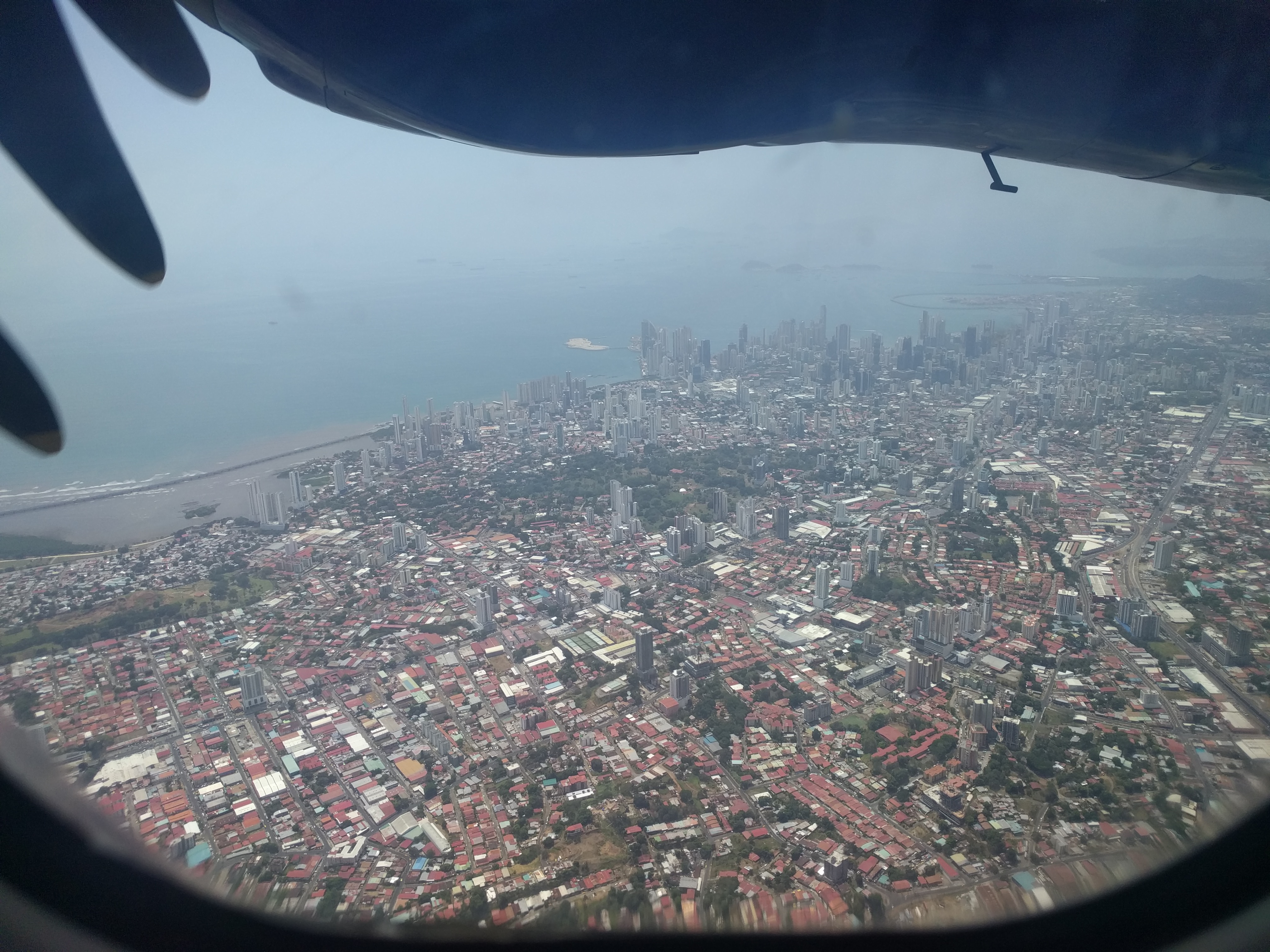 In about an hour, we touched down in Cartagena, Colombia. (Country 24!) 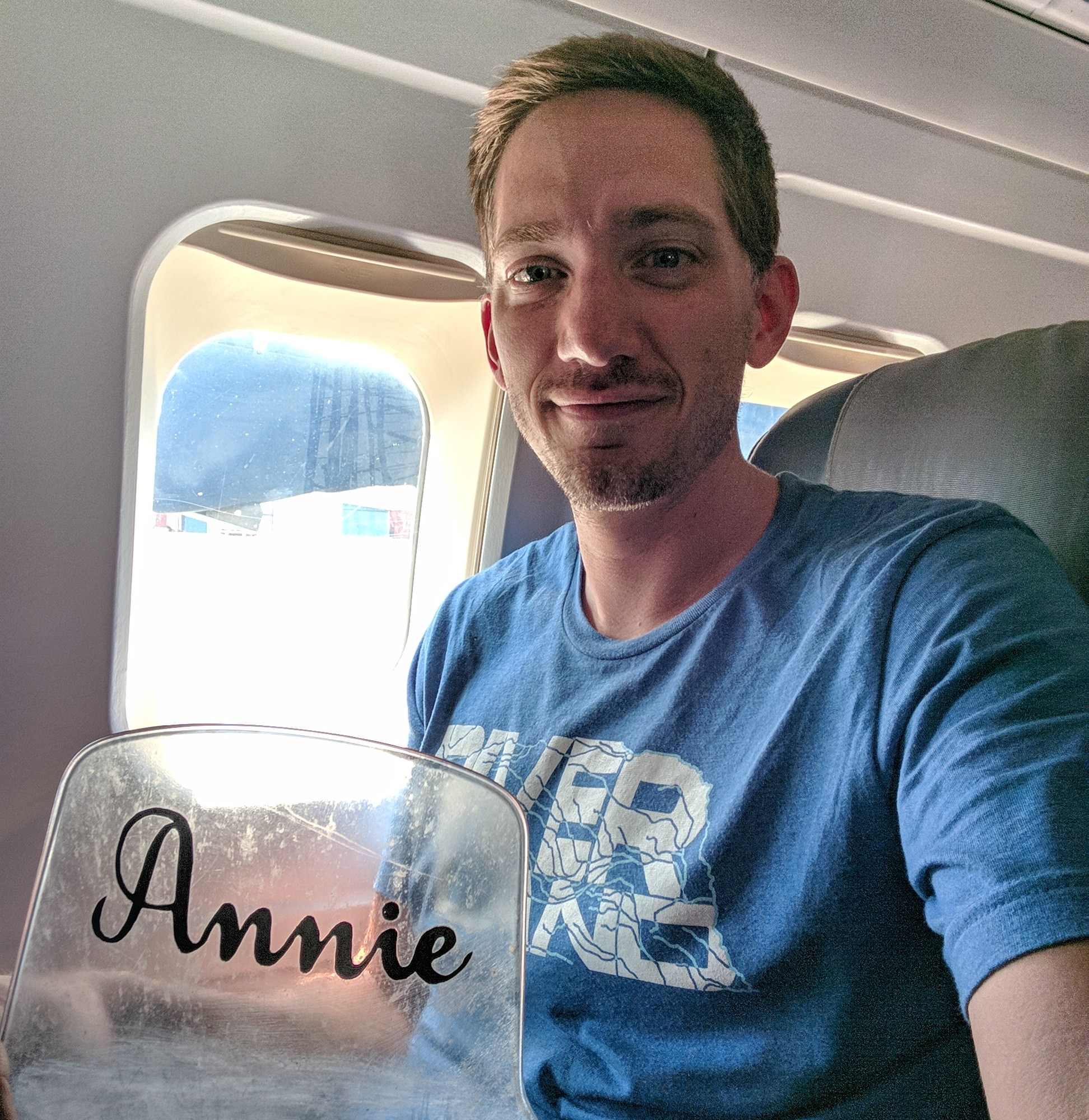 Next time, we’ll begin our adventures in this new continent. Thanks for reading.

10 thoughts on “Crossing Over”