In this post, I get to visit the land of my ancestors (…..apparently). We cross a threshold, almost propose marriage, nearly bid on some cattle and have our sunglasses passed around. Medellin, here we come!

A fond farewell to Barranquilla.

It was time for me to head south. I will probably be typing this sentence quite a bit in the coming posts. I used up a good chunk of the morning in Barranquilla, so I would just be making it to the town of Sampues on the day. Route:

I actually don’t have a single picture or video from this stretch. I guess that kind of says about as much as I need to about it.

I found a nice trucker hotel called Hotel El Lago on the iOverlander app (an app for travelers which I’ve used much more regularly recently). 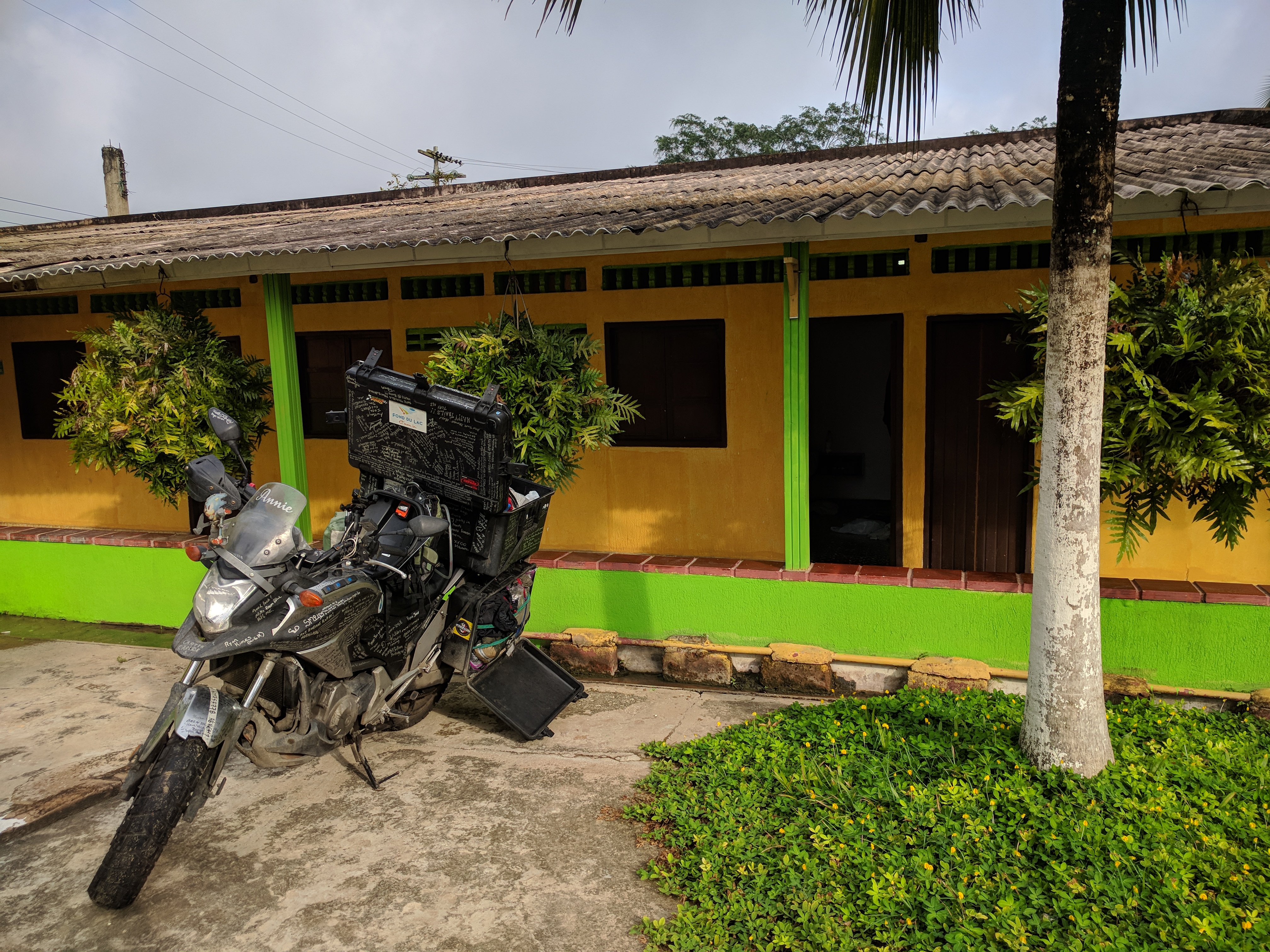 My options were a room with AC for $9 or a room without for $7. I chose the cheaper option. Hey, $2 can go a long ways down here! My room had an MVP ceiling fan that delivered gale force winds throughout the night.

I’m not sure how much it was for the room with the toilet seat. Apparently those are reserved for the upper class. 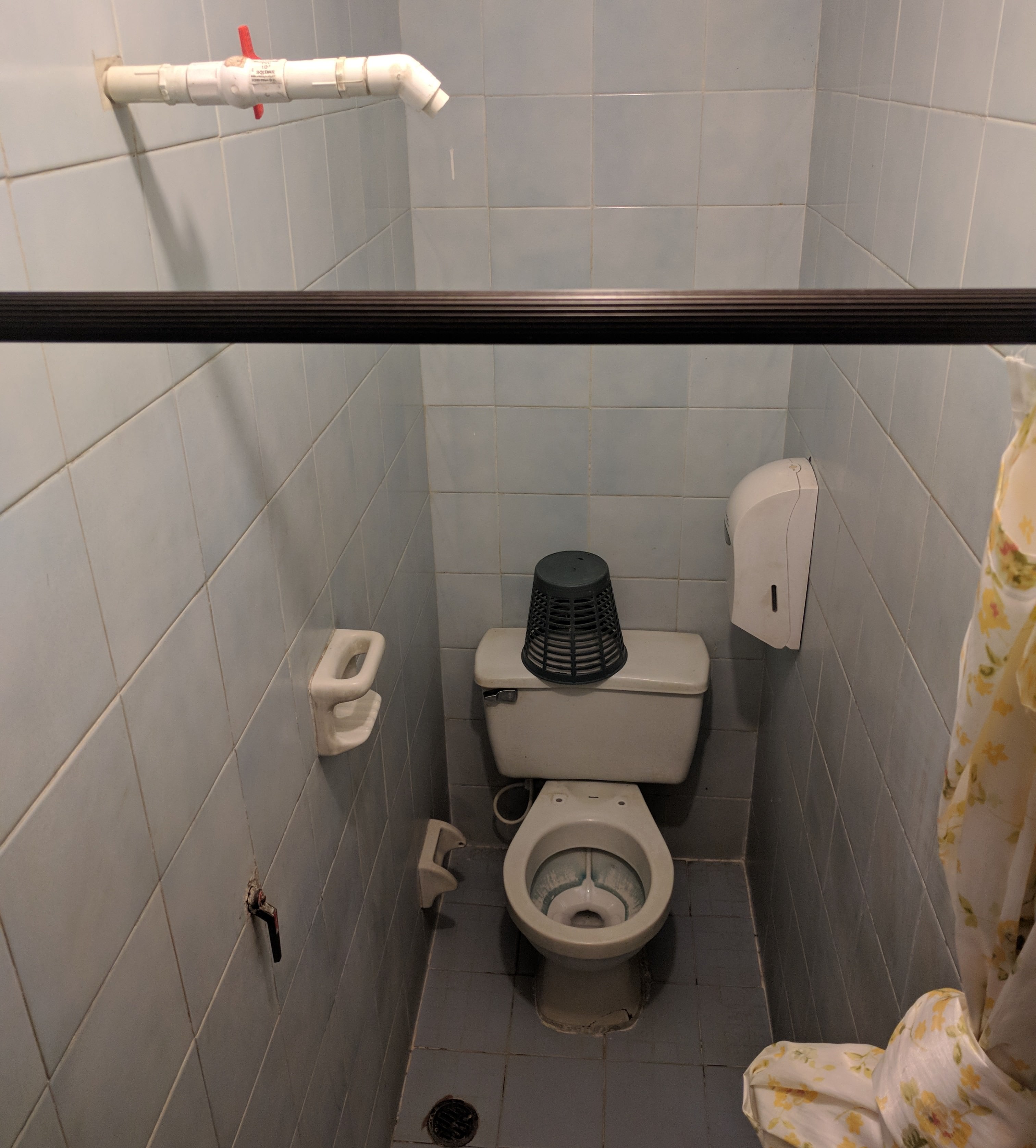 But there was a livestock auction on TV, so I still felt right at home. 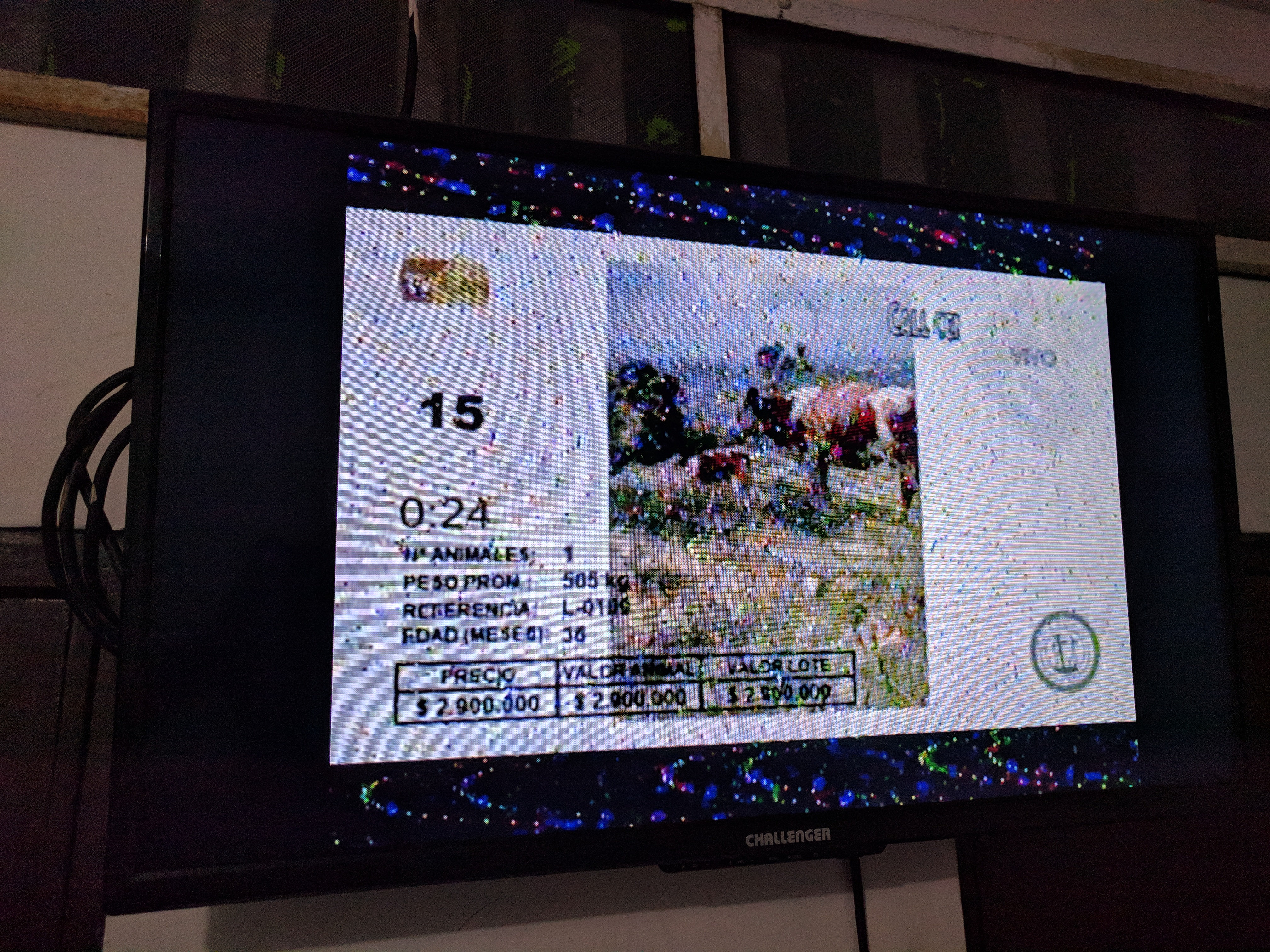 Seriously though, I am very appreciative for these kinds of places. Being able to pay such a paltry sum to ensure safety for both Annie and I is immeasurably beneficial. I had a nice night of sleep beneath my helicopter rotors.

Today would be a day in which I would reach a somewhat special milestone.

On June 20th, just 14 days into my trip, I reached Fairbanks, Alaska. I was en route to the most northern song place, Chatanika, Alaska (Place 3 of 92).

I remember wondering when would be the next time that I would be this far from home (2,589 miles, as the crow flies). Of course there’s a website where you can figure that out. 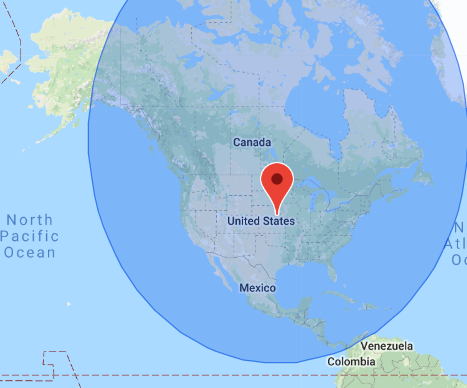 A couple of hours into my ride, I crossed that threshold.

This would be a special day for another reason as well. On this day I would get to visit the land of my ancestors. I know I look like a standard European, but hear me out:

I’ve never really liked the word “Caucasian” to refer my race. Not that there is anything inherently wrong with the word, it’s just that I could never find a place called “Caucasia” on a map. But this day, that all changed. 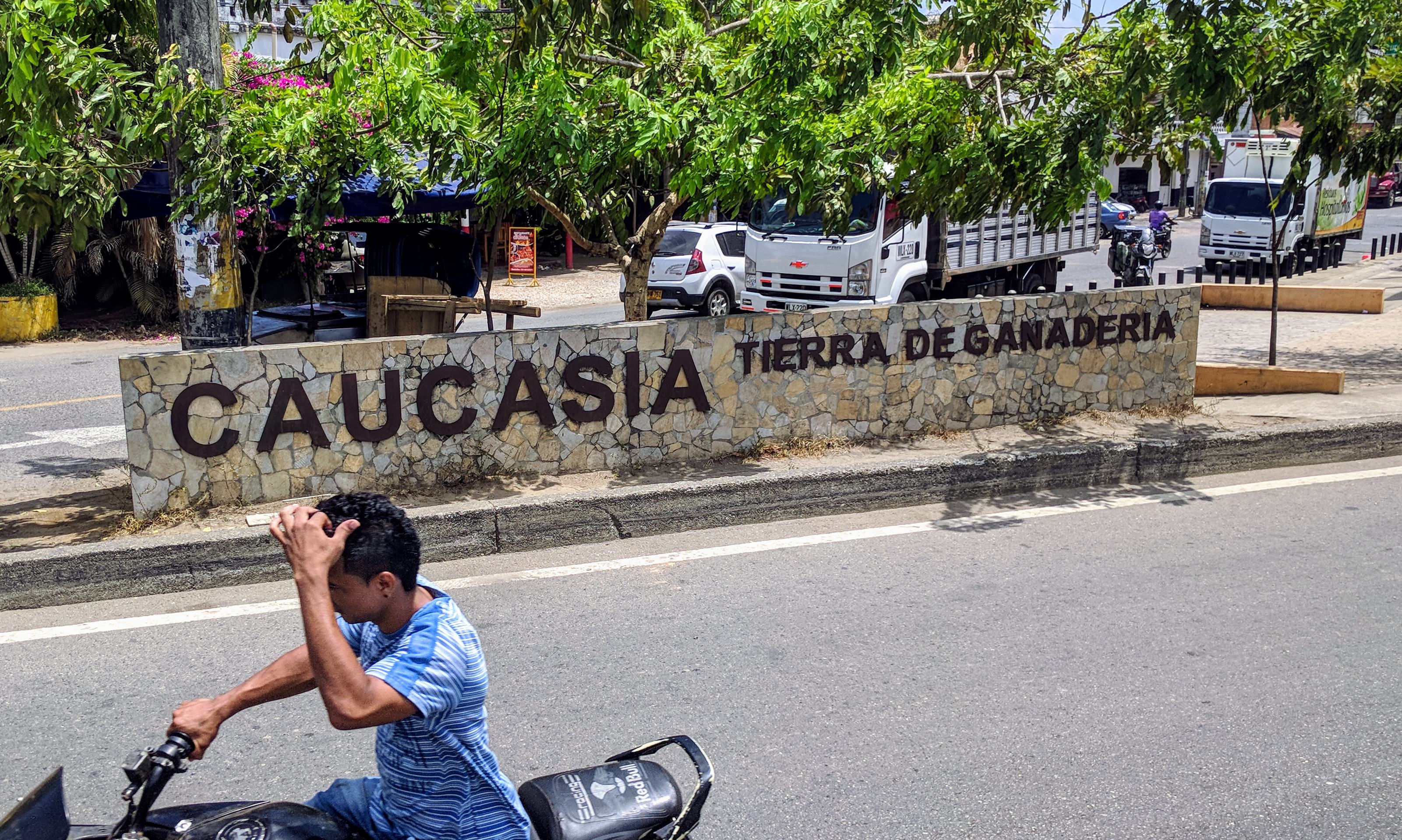 It was nice to be in my ancestral lands, but I soon became confused. It seemed like most of the residents of this place were actually of Hispanic origin. Additionally, I didn’t see any other light-complected pilgrims completing a Hajj-like journey to visit this hallowed site.

I think I was the only Caucasian in Caucasia. Sometimes the world is a hard place to understand.

…..sorry about all that. Let’s get back to the story.

My ride for the day was quite pleasant. There were enough bends in the road to keep me interested and the surface was well maintained. I have to sheepishly admit that it took me a few minutes to pass this gal on a scooter during a really curvy section of the road. She was riding like she meant it. If I had a ring along, I may have proposed on the spot.

In Caucasia, I was excited to meet up once again with my friend, Leebong. However, I was less excited about the circumstances that allowed our paths to cross again. He hit a cow on that was on the road, which jumped into his car as he attempted to swerve. 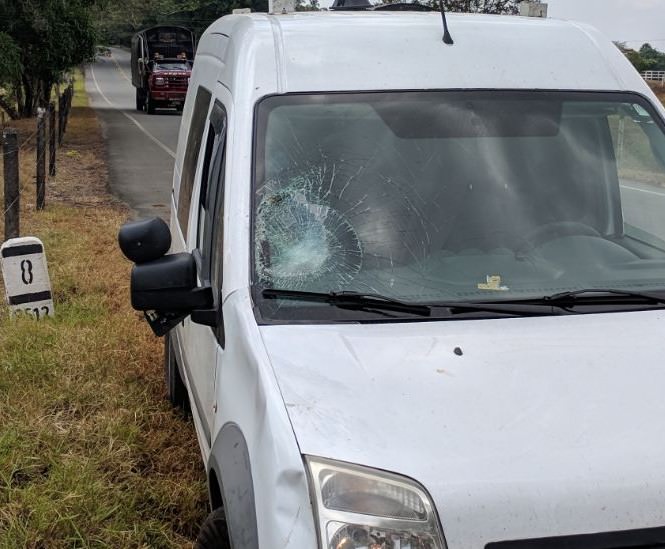 No one was hurt and the cow was able to walk away, but it did quite a number on his car. The windshield was smashed and the passenger door was bent beyond use. He was in Caucasia to get some quotes on repairs.

I decided to accompany him for the rest of the day as he went from shop to shop. I really admired the way he handled the whole situation. This incident was going to have a major impact on his time and budget, but he really took it in stride.

After getting quotes (which, of course, took quite a few hours) we went to a small town where Leebong met with a policeman and the owner of the cow to try to work out an agreement. The people in this town looked at Annie as if she was a UFO. She did stick out just a little.

Have I mentioned that there are a lot of motorcycles in Colombia?

We shared a decent room at a hotel in Taraza for about $8 a piece.

We had a nice breakfast at the restaurant attached to the hotel. He captured a good picture of the moment when I say something profound. 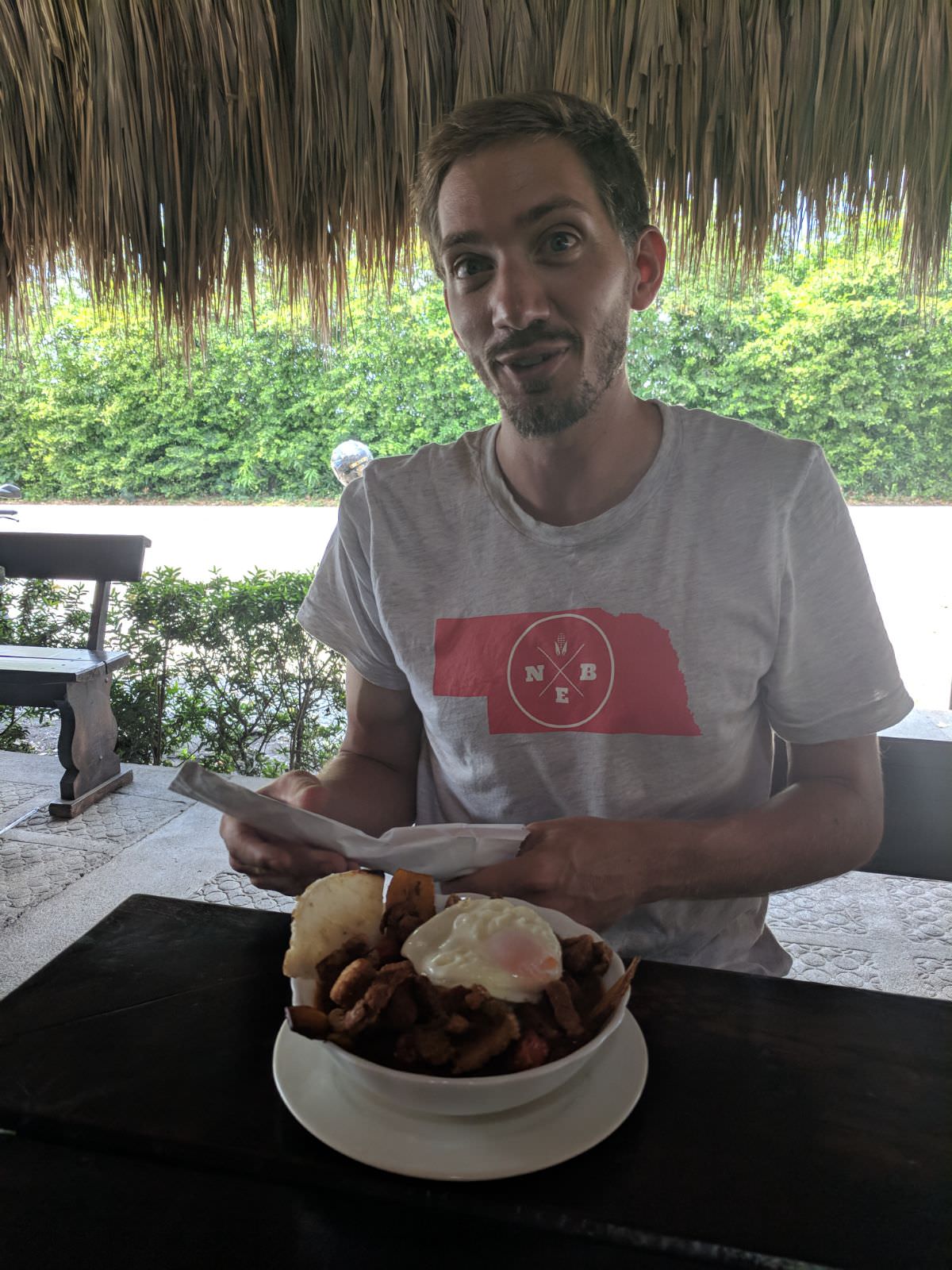 Our server came over and asked Leebong where he was from, then turned and walked away. We both kind of laughed with confusion since that question is usually posed to both of us when we’re together. It turns out that the owner of the restaurant has a daughter who is very interested in Korean culture. Before Leebong knew it, he was on the phone with her. 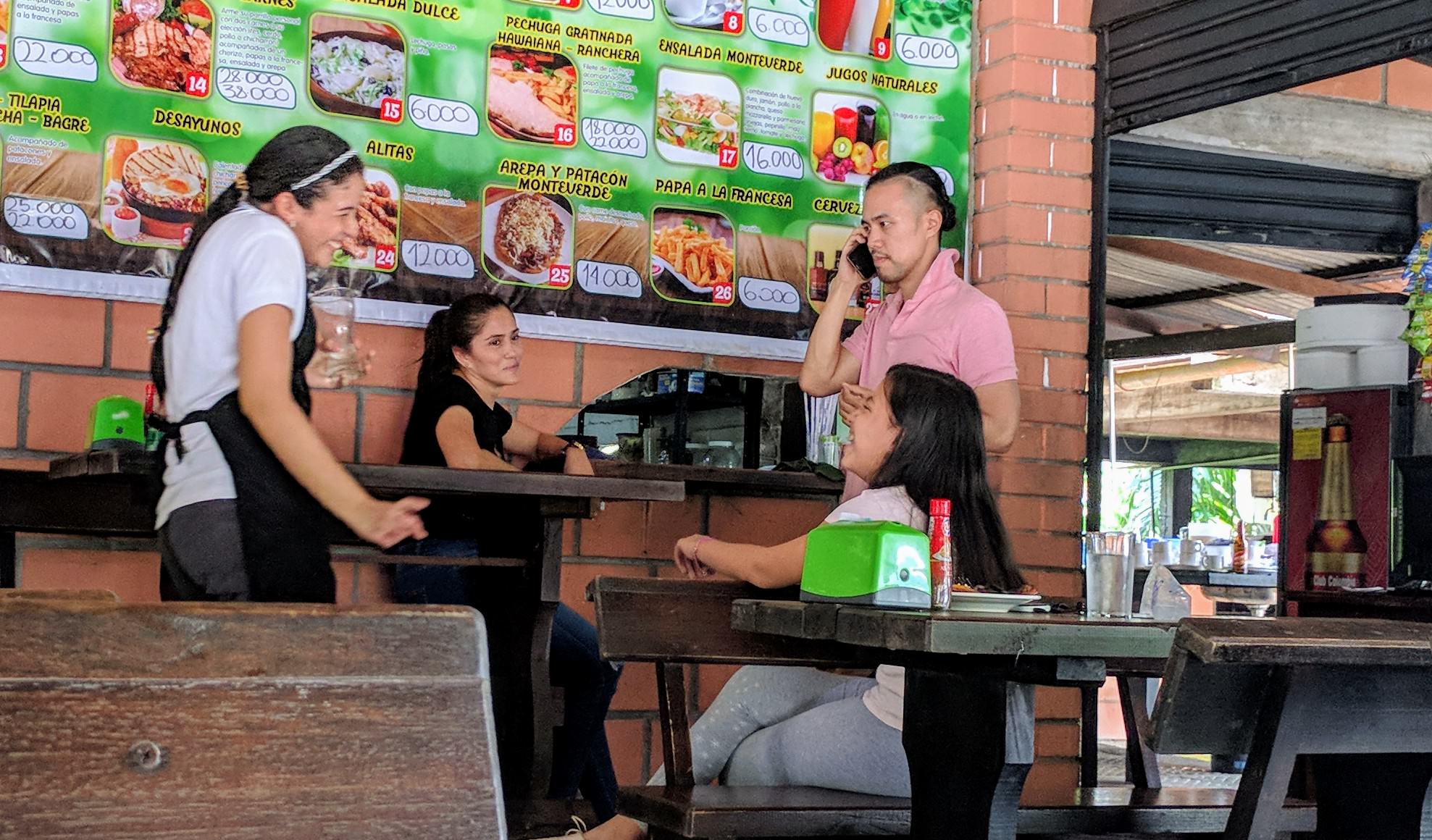 I just love all of the expressions in that picture. 🙂

I decided that I was going to move on to Medellin for the evening. Leebong had wanted to interview me about the Darien Gap shipping process, but we didn’t get it done in Cartagena. Being the cinematographer that he is, he didn’t just want to do it at the hotel. We drove into town and looked for a nice spot.

It became obvious very quickly that the city of Taraza does not see too many tourists. A boy we met asked us where we were from and said that we both looked like gringos. Leebong asked to make sure that he, too, was being included in this description. I got more enjoyment than I should have from this interaction.

We decided to shoot at a little soccer field which was actively in use (it was Saturday morning). Boys were playing on the cement field, while 20-30 others were in the stands waiting for their turn. 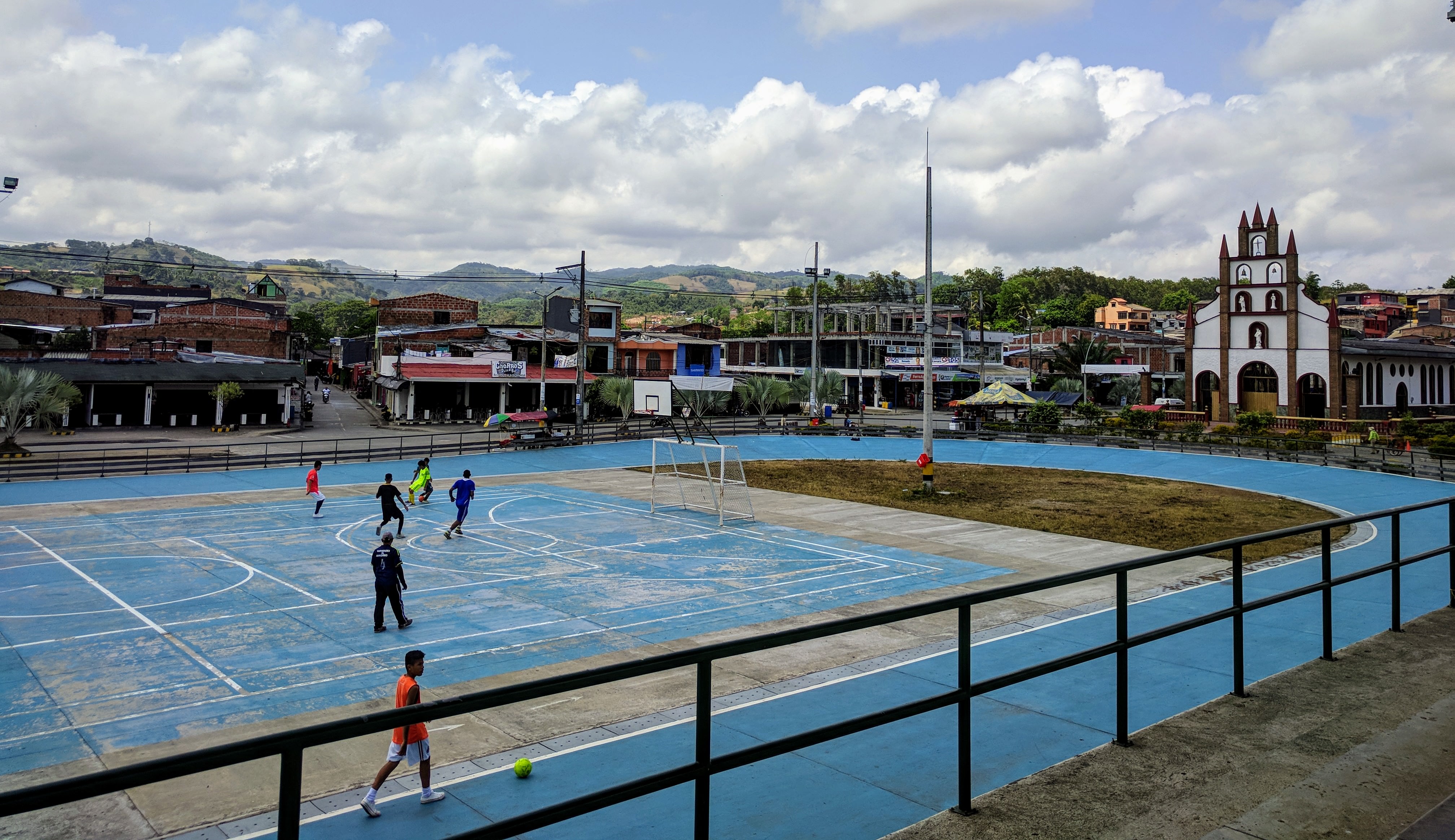 As we were setting up, a crowd begin to close in. Apparently an American and a Korean with a bunch of camera equipment was not what these boys were expecting to see. 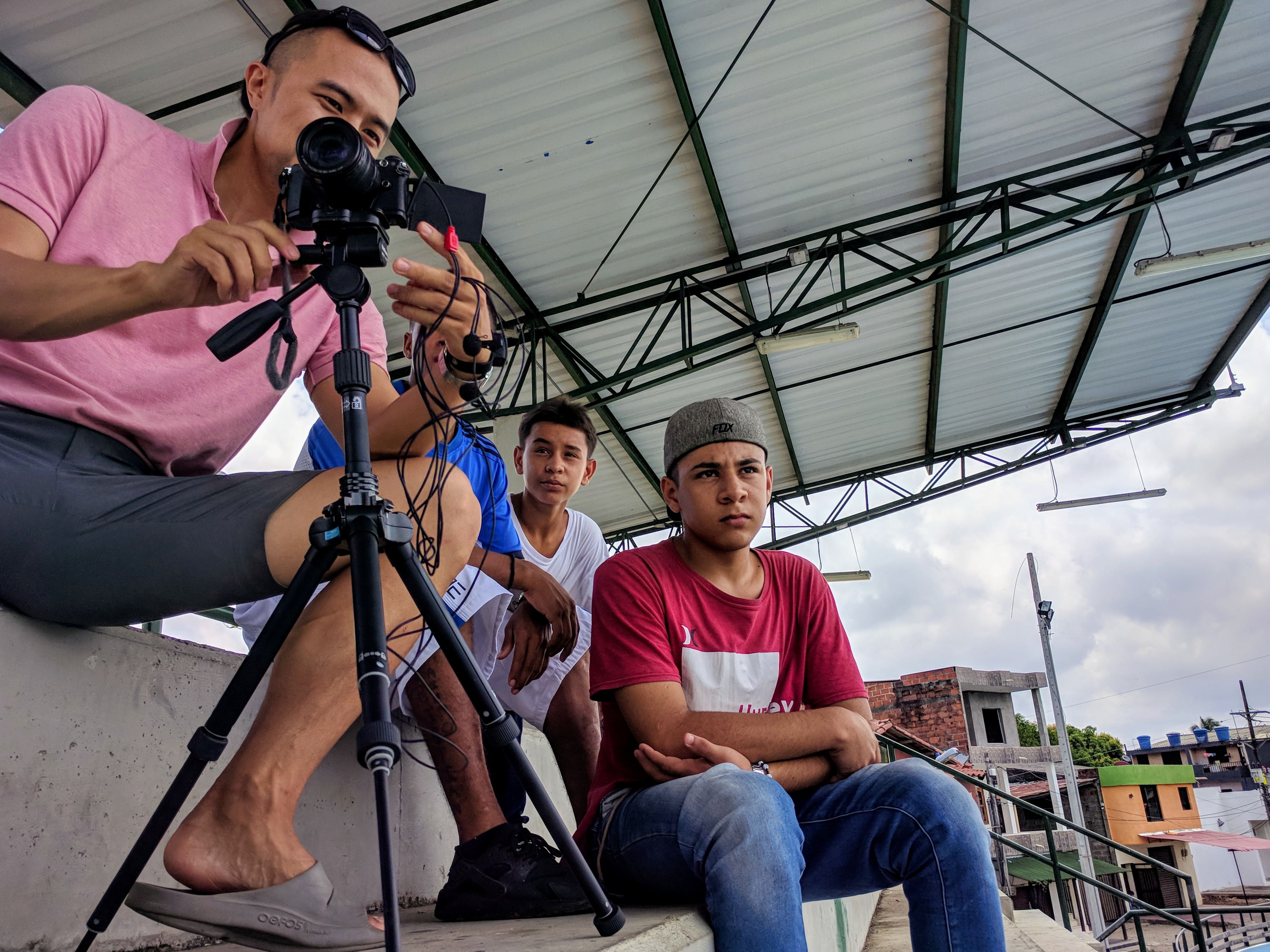 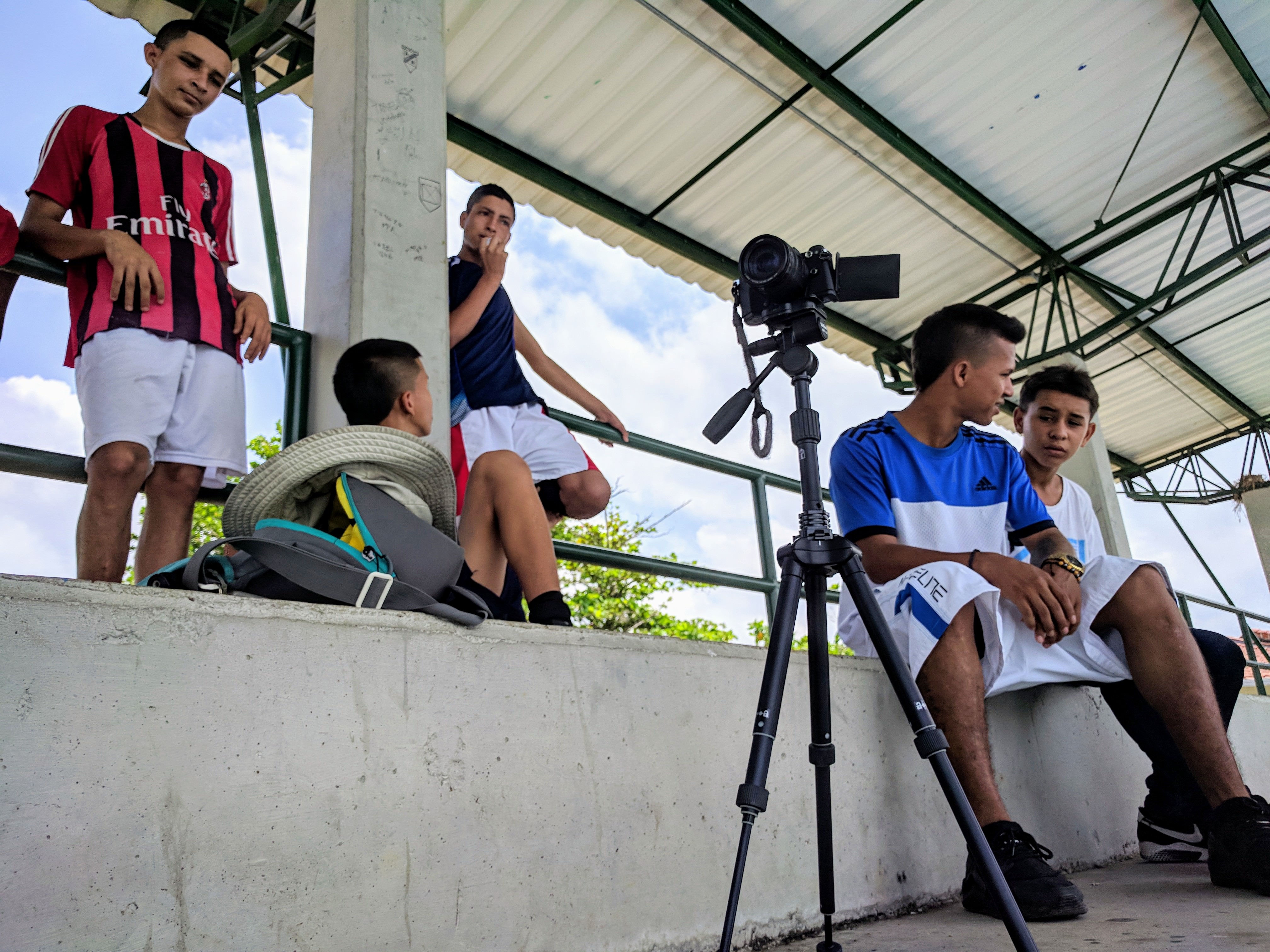 I just did my thing:

Afterwards I looked at the crowed with exaggerated confidence and asked how it was. Though none of them understood what I was saying, I got pretty good reviews. The interviews were far from over though. The boys had many questions for us.

I struggled with comprehension quite a few times, so it was great to have Leebong there to help with the Spanish. His ability to translate between two languages, neither of which are his first language, always impresses me.

It was great to meet these guys and see how interested they were in us. 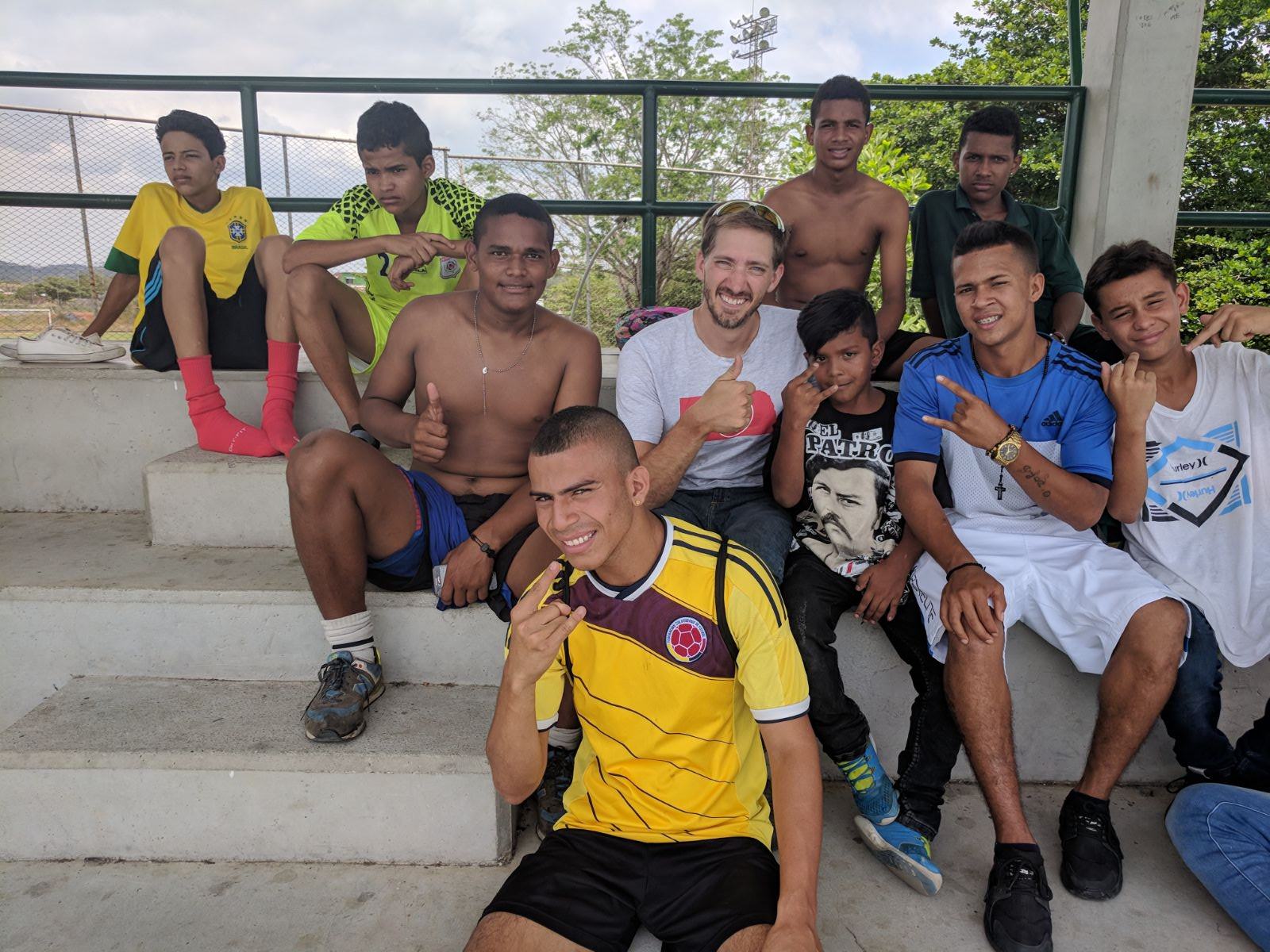 (Thanks again to Leebong for sharing so much media. I can’t tell you how nice it is to have someone else’s perspective, visually speaking!)

We spent so much time with them, that I actually got a little worried about getting to Medellin before the sun set. I didn’t hit the road until around 2pm.

Early in this route I went through a section that seemed to rely on only a single industry: Washing trucks. I can’t begin to count how many of these there were along the road. To show that they are open for business, they all just leave their hoses spraying straight up in the air.

Soon, my climb into the mountains began. I was really looking forward to this since the hot weather was starting to wear on me. Some time at high altitudes would be a nice break.

This kid had a good idea. I thought about dropping into neutral and joining him:

I even hit some fog at the higher elevations.

At one point I turned my hand grip heaters on for the first time in over a month.

After coming down the other side, there was a nice wide freeway which was well laid out. It was a nice first impression of the city. I just barely beat the darkness and pulled into my hostel for the next few days, Guest House Calla’o el Loro. (This literally means “quiet the parrot.” It’s a slang way to say “shut up.”) They have a mural that I really like. 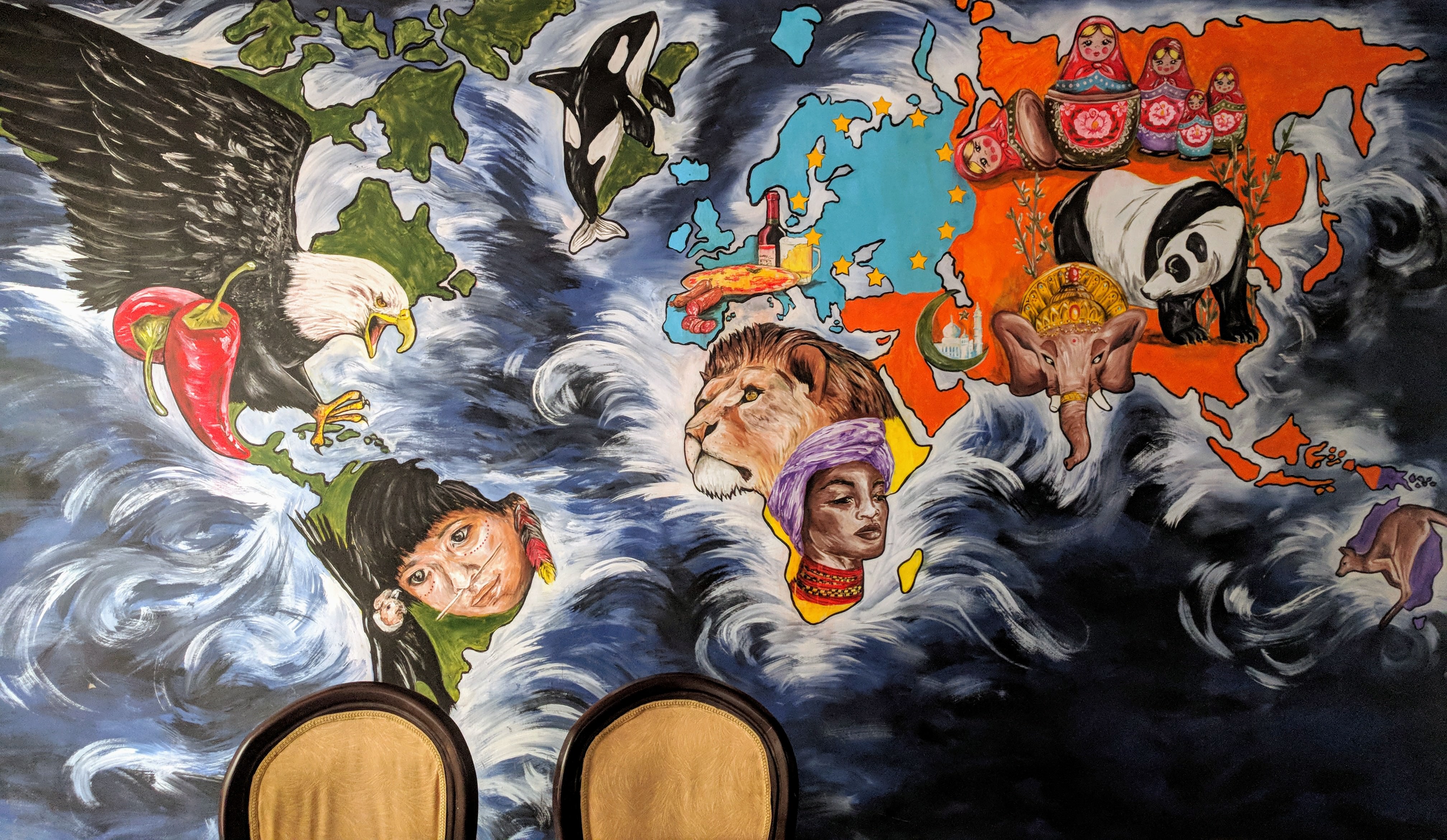 I was welcomed warmly and felt right at home. Marijuana scent was heavy in the air, but it wasn’t too much worse than driving through Colorado. There was a pretty big party this night, but ear plugs made a good night sleep possible. (Never leave home without them!)

A really down day. This was actually the day of a big election in Colombia and some people had said that it might not be the safest to be out. I spent most of the day catching up on writing.

Most hostels have an owner. This one has a king named Dante. He was a great host: 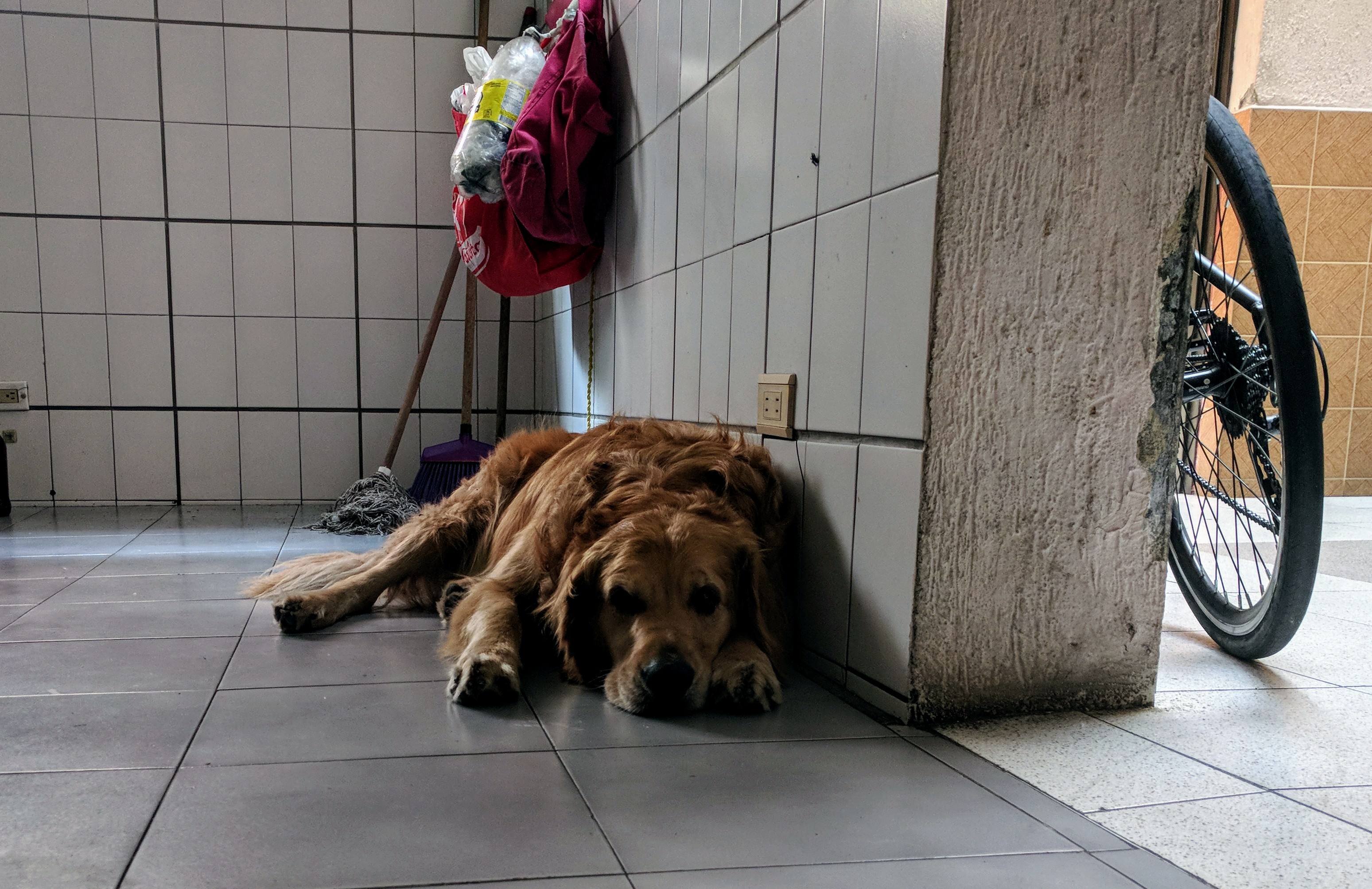 One of the things that I have really liked about Colombia so far is the way they say “you’re welcome.” In Spanish, the phrase “de nada” is the most common translation. The phrase basically means “think nothing of it” or “it was nothing.” Though an OK sentiment, it’s definitely not my favorite.

Colombians almost exclusively use “con gusto” which means “with pleasure.” I think this is a much nicer thing to say when someone says thanks. This is especially important for me since I have to thank people for their help a few hundred times each day. 🙂

I’m kind of at an awkward spot in the narrative, but I’ll leave it there for now. In the next episode, we’ll try to take care of some more business and see some impressive sights.

Realtime update: I’m at a nice hostel in Cali, Colombia. I have a few more things to see in the country before continuing on to Ecuador. Doing well!

6 thoughts on “The Motherland”