This post, written by my dear brother in law, details our visit to the ancient city of the Incas. Beware, there are lots of pictures coming! 🙂

Once again I’m getting some help with my writing. This post is brought to you by my cuñado (brother in law), Brad. In this episode, Brad will provide some wonderful observations and photos about our time in Machu Picchu, one of the seven wonders of the modern world.

I’ll let him do his thing and chime in with some thoughts at the end. Take it away, Brad! 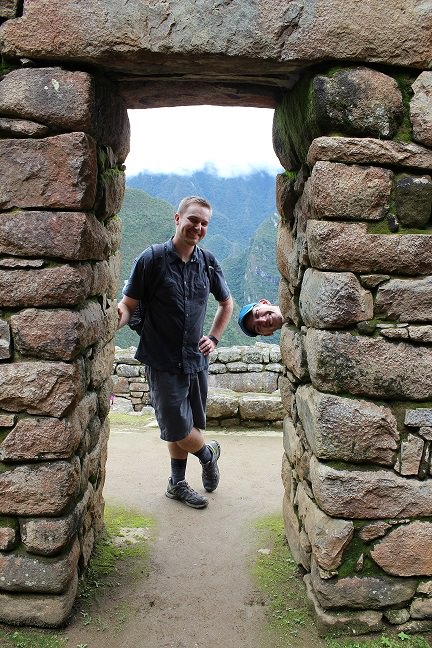 For those of you I haven’t had the pleasure of meeting, my name is Brad. Brett and I share a number of interests, the most important of which is his lovely sister Elise. We’ve been married for a year and a half now, and this trip to Machu Picchu was a wonderful experience to share with my new family. 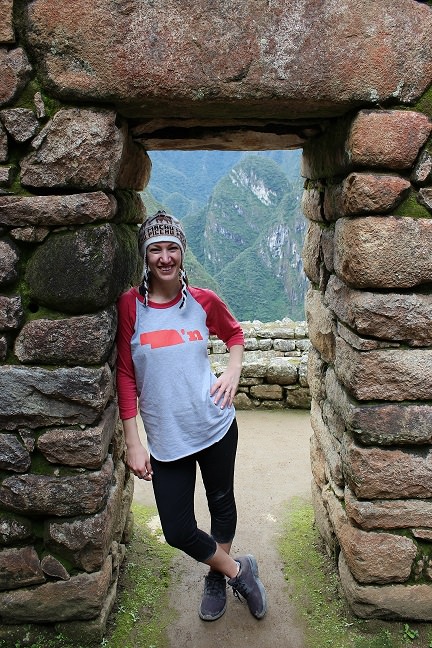 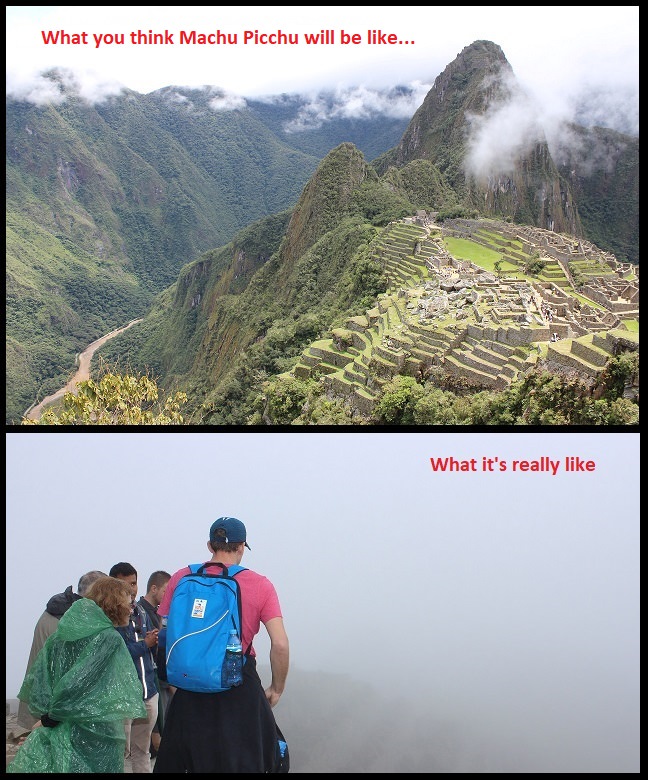 After years of fantasizing about this place, it’s hard not to envision exactly what it’s going to be like the moment you arrive.

Surprise #2 – When you purchase tickets to Machu Picchu, you can choose to either visit in the morning, or in the afternoon. Since we knew we would be visiting during the tail end of the raining season, Betty had the foresight to contact the tourism office and inquire over the best time of day to plan our visit in order to avoid the rain. Their response: “Come back in May”.

Surprise #3 – When you purchase tickets to Machu Picchu weeks in advance of your trip, you would expect that the Peruvian government would understand that most visitors are travelling great distances to see this place. You would assume any changes to the visiting hours would be communicated well in advance. In fact, you would assume that they would be so prepared that you wouldn’t even be able to purchase a ticket for a time that they would be closing the site. Well, you would assume wrong. Three days before our visit, our pricey afternoon tickets became useless since it was decided that the park would be closed early. And the reason for it’s closure… you guessed it, that was never communicated at all. Fortunately for us, shifting our schedule was not too big of a deal. But still, what the heck?

Surprise #4 – Where are the bathrooms? I’m glad you asked, there is only a single bathroom and it’s located outside of the entrance. Normally you have one opportunity for re-entry, but we’re special so they decided to keep our tickets. So what do you do when urgency strikes???? They say that necessity is the mother of invention, and while most of us assumed they were ancient aqueducts, others discovered squatty potties discreetly placed all around the city. 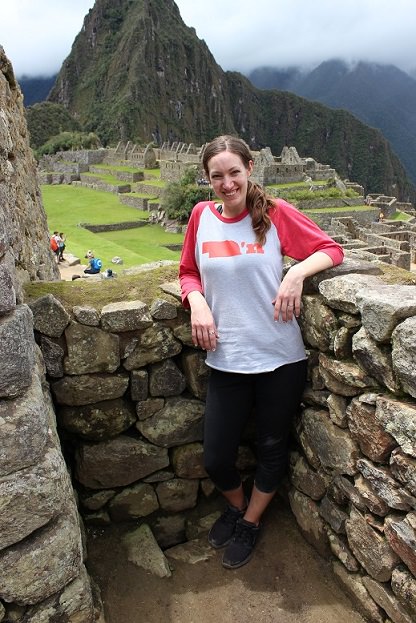 I’ll end this chapter with a simple observation. This is not the United States, and things do not work the same way here. After sharing my incredulity over the various surprises of our trip, Brett asked me, “Are you really surprised?” I guess the real answer is no.

Chapter 2 – Are you Afraid of Heights? 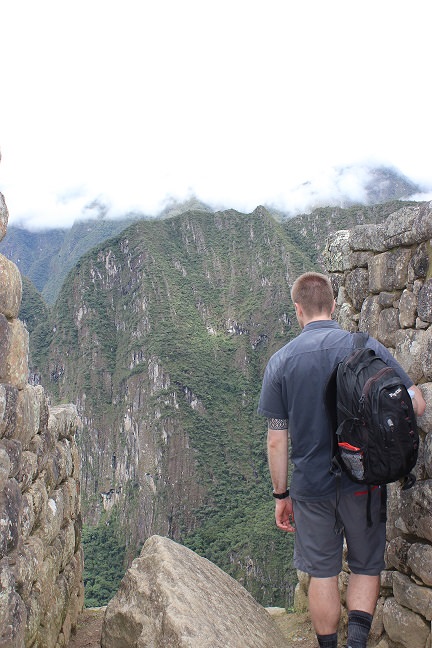 Machu Picchu is only accessible from one direction. The river surrounds the mountain on three sides and those faces are the definition of precipices. I can’t fathom how many people must have bit the dust during the construction of the city. 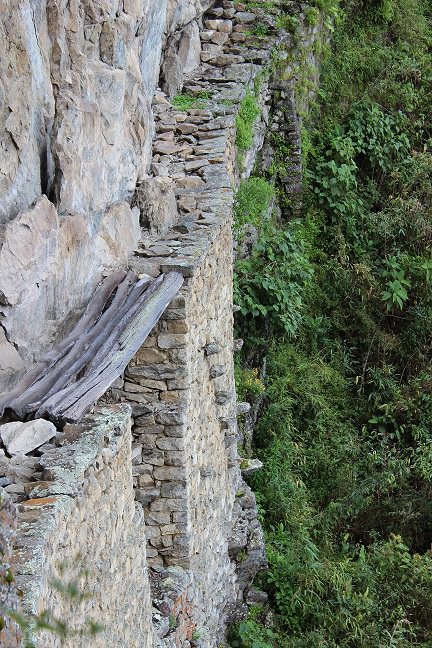 This is the Inca bridge. What you can’t see is the 500 ft drop just below. 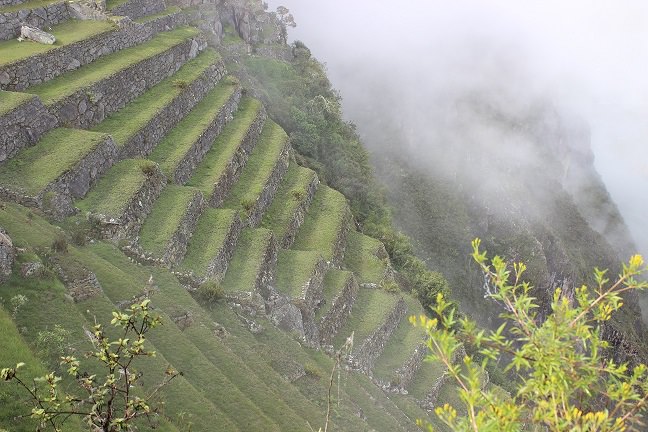 Unfortunately, the photos don’t do it justice. The terraces surrounding Machu Picchu are steep, unforgiving, and incredible engineering feats.

Hiram Bingham was credited with the scientific discovery of Machu Picchu in 1911. What does this really mean? It means he was the first one to photograph the ancient ruins. He was of course led to the site by local farmers who already knew of its existence. However, Bingham still played a foundational role in bringing this ancient marvel to the public eye by publishing his findings in National Geographic.

One of the most impressive and puzzling features of this place is that it was not laid to waste by the Spanish Conquistadors who overthrew the Incan Empire. They made a point of destroying all of the Incan’s sacred sites, which suggest that they never found Machu Picchu.

To give you an idea of what Bingham saw, here are some freely accessible photos from National Geographic’s website.

One of the first things that you notice about this city is its scale. Then you learn that half of the construction is not visible because it’s actually underground. In fact, the entire mountain top had to be terraformed several meters deep before construction could begin. Underneath the city is a sophisticated water filtration system which protects the city from landslides. 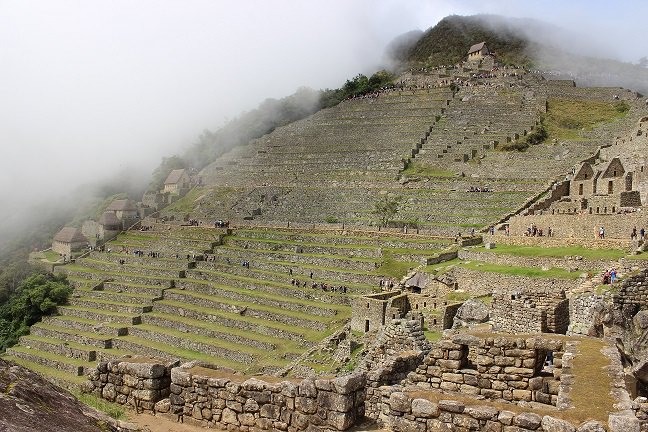 Another unique feature of the architecture is the stone work. Each stone was carefully carved from granite (a notoriously hard rock), and fitted with exacting precision to the shape of its neighbors. The Incan’s did not use mortar to hold their masonry in place. Instead, the carefully carved stones allowed the structures to vibrate and then naturally resettle themselves after earthquakes. 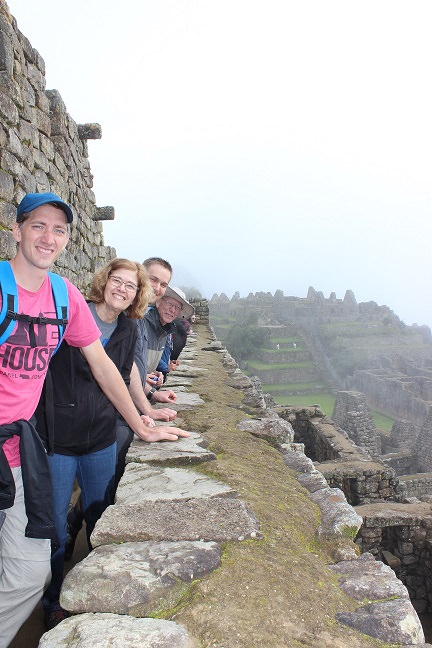 Most surprising of all, this society accomplished these feats without the help of the wheel or metal (iron) tools. The extent of the Incan Empire rivaled that of the Romans. It stretched approximately the length of the East to West coast of the United States. 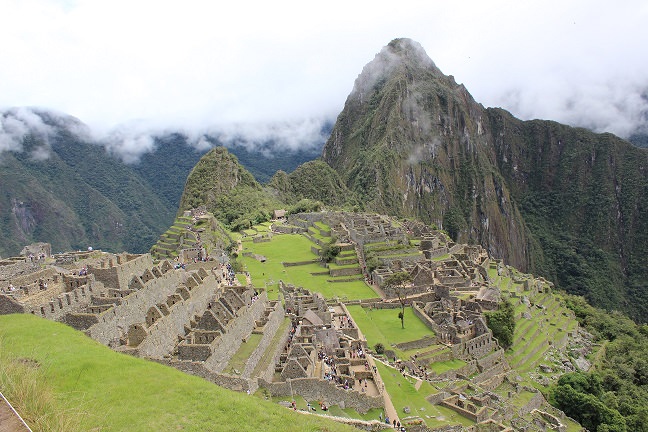 Skeletons found in the tombs surrounding Machu Picchu have confirmed that the inhabitants consumed lots of corn. Our guide informed us that Incan’s had grown over 300 different varieties of the crop. Though it is the most abundant crop in Peru today, that was not true of Incan times. Instead, corn was a royal crop.

As Brett pointed out, it seems that every culture has managed to discover a way to make alcohol, and the Incans are no different. One of the sacred drinks served at Machu Picchu is called “Chicha”. It was, of course, made from corn. How did they get it to ferment? Saliva. That’s right. The women would chew the corn and spit it out into a basin. The enzymes in their saliva would assist the fermentation process. 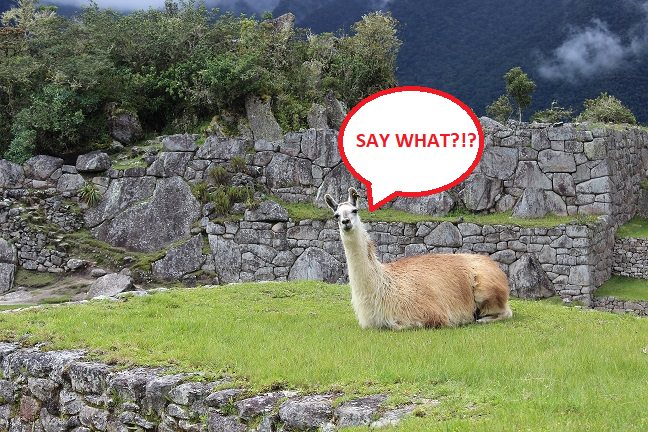 Chapter 6 – Did you know that you speak Quechua?

Quechua was the official language of the Incans. However, the language itself pre-dates the formation of the Incan Empire. Interestingly, during Incan times, the language did not have a written form; it was only spoken. It wasn’t until the arrival of the Spanish conquistadors that Quechua was written with the roman alphabet. Here are a few words you might know:

With about 8-10 million speakers today, Quechua is the most widely spoken indigenous language in the world. 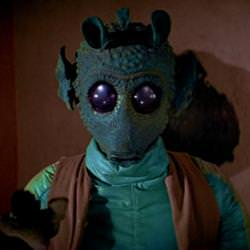 Fun fact: The native language of the character “Greedo” in Star Wars Episode IV: A New Hope, is “Rodian”. However, in reality, it’s just simplified Quechua that can be heard during his conversation with Han Solo.

Chapter 7 – Does It Live Up To the Hype?

Yes. Yes. Yes. It really does. You should book your trip now! Until then I highly encourage you to watch “Machu Picchu Decoded” on YouTube: https://www.youtube.com/watch?v=TqipjHdPYM8

And finally, I’ll leave you with a few more photos to whet your appetite for adventure! 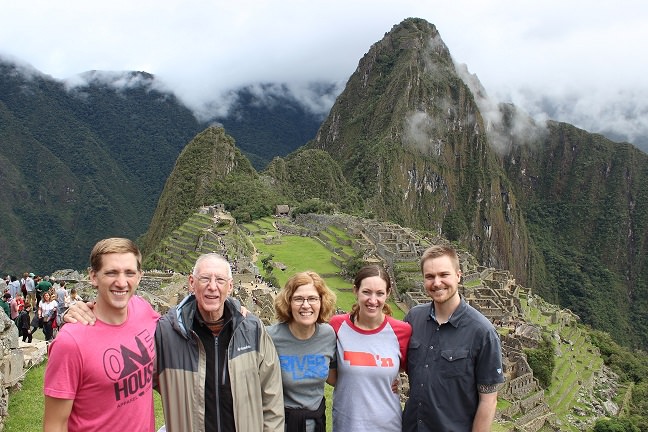 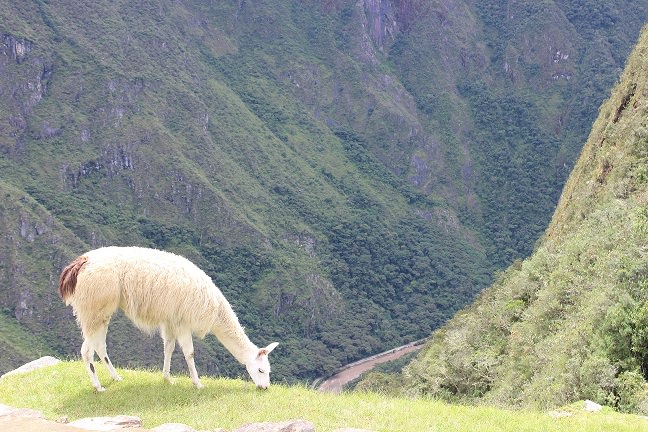 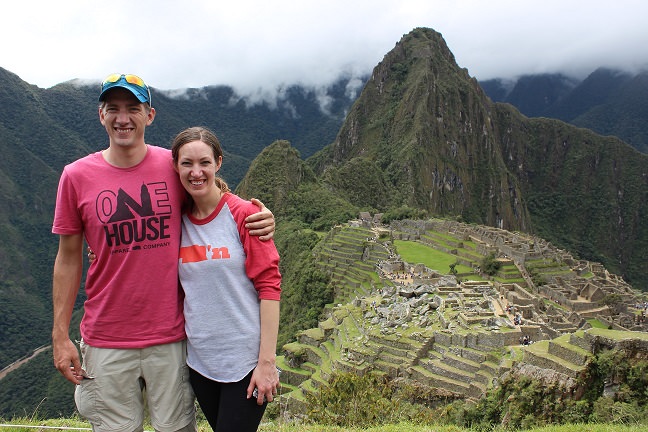 Great stuff, Brad! Thanks so much for taking over the bulk of the story. I appreciate your obscure references and shameless plug. 🙂 I’ll just add a few more notes and pictures.

Our day started early (we left the hotel around 4) and included lots of hiking. 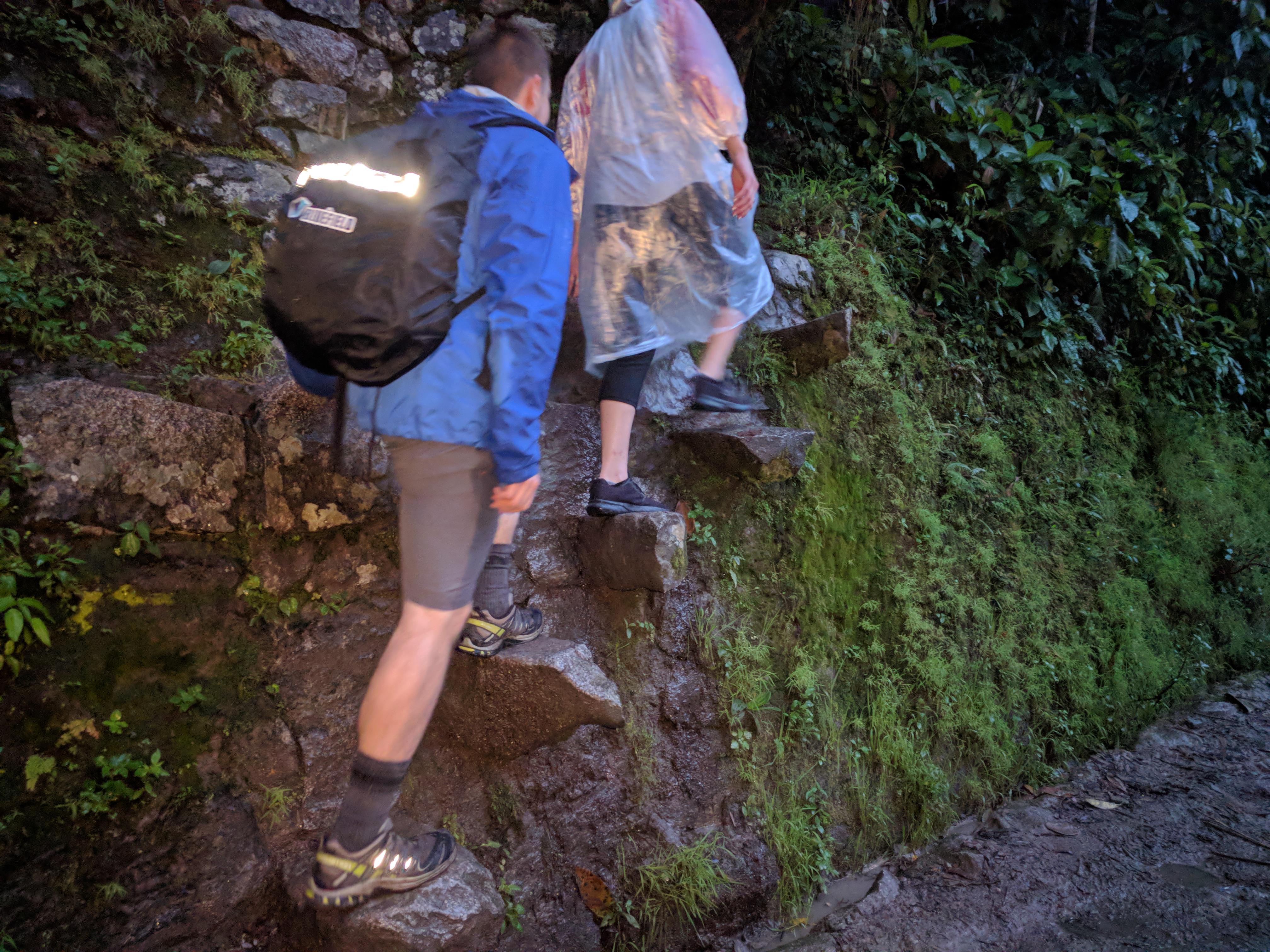 Brad, Elise and I hiked all the way up, around the site twice and back down. Brad’s fitbit showed 17 miles for the day! 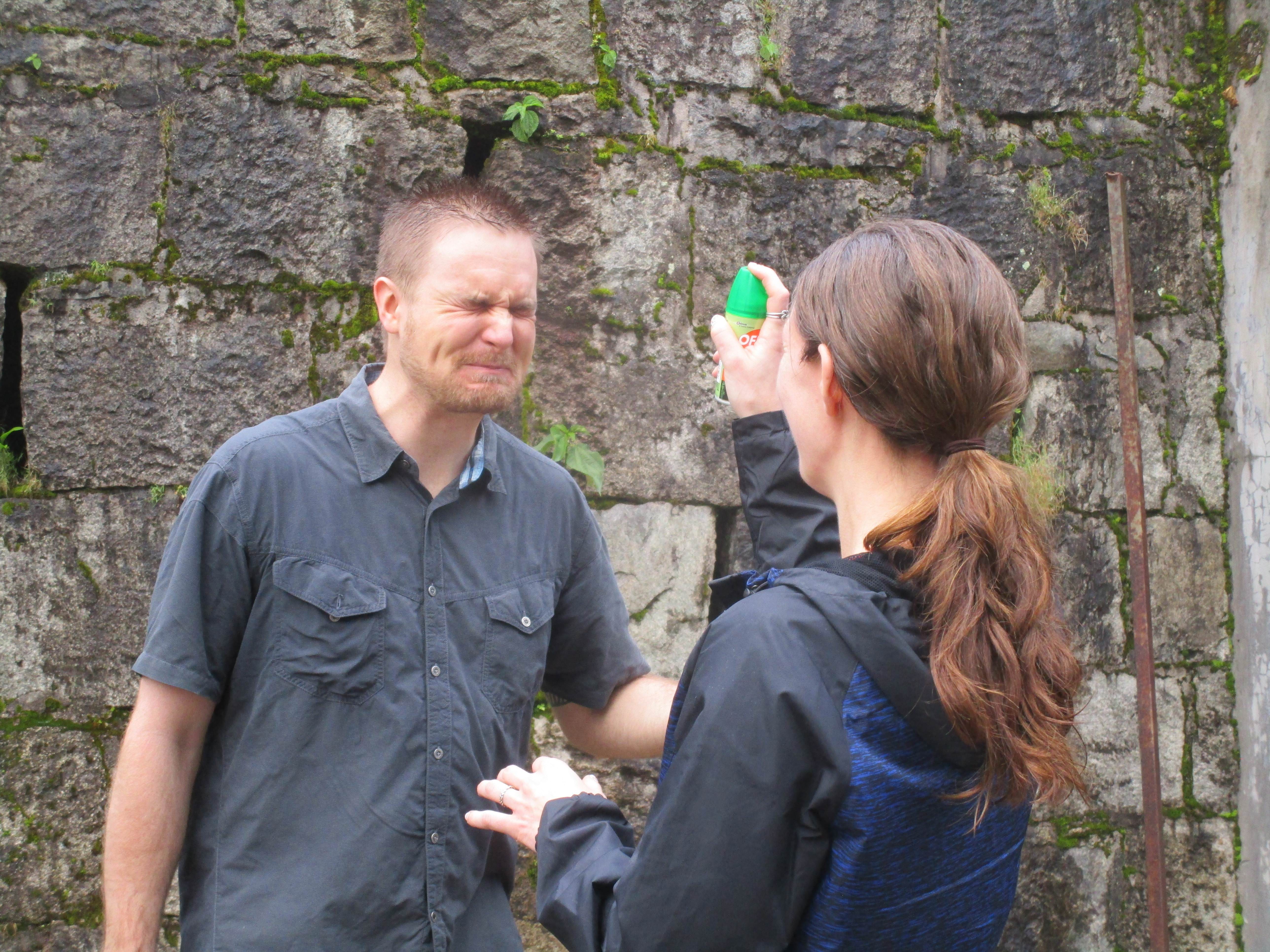 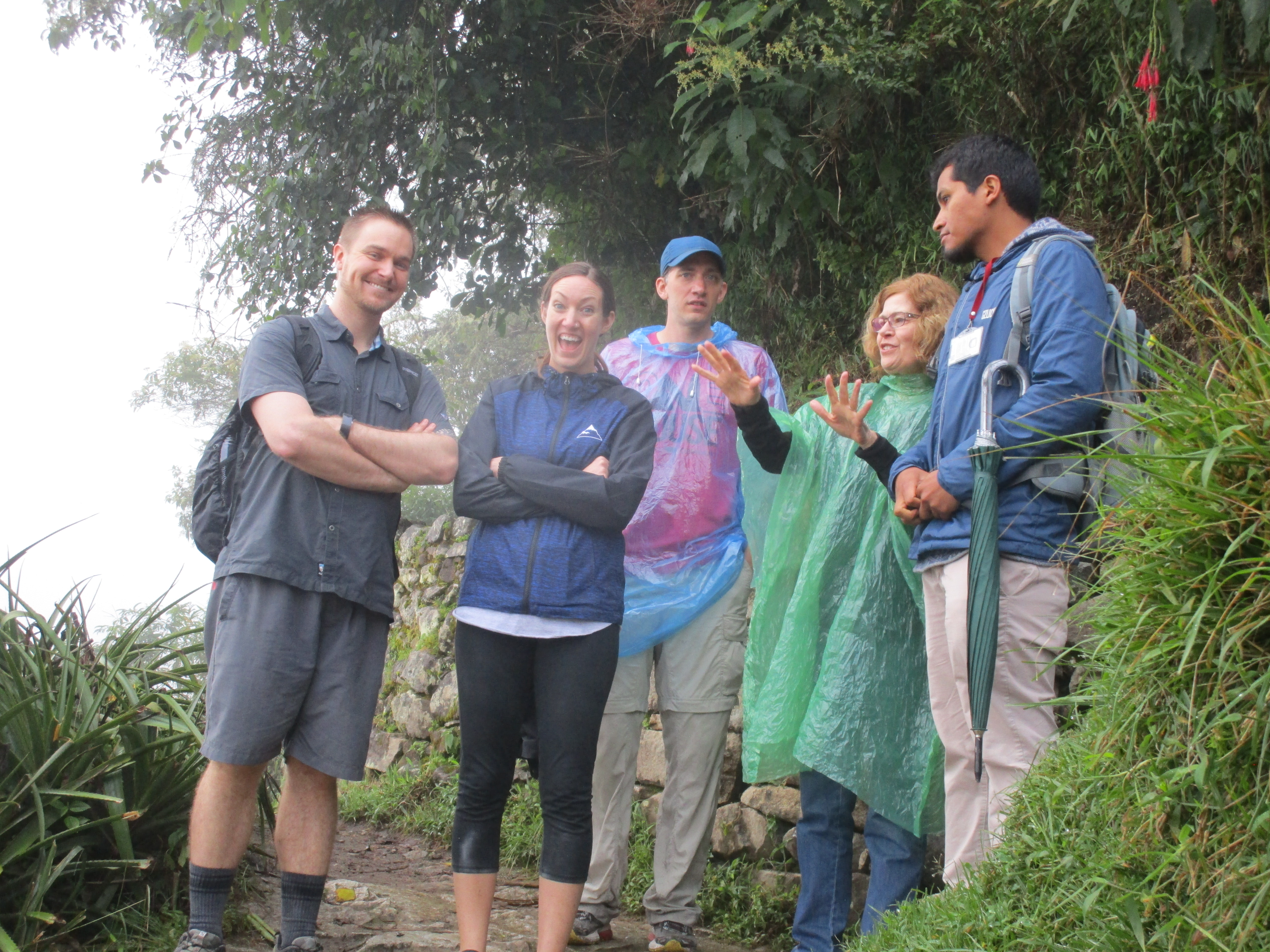 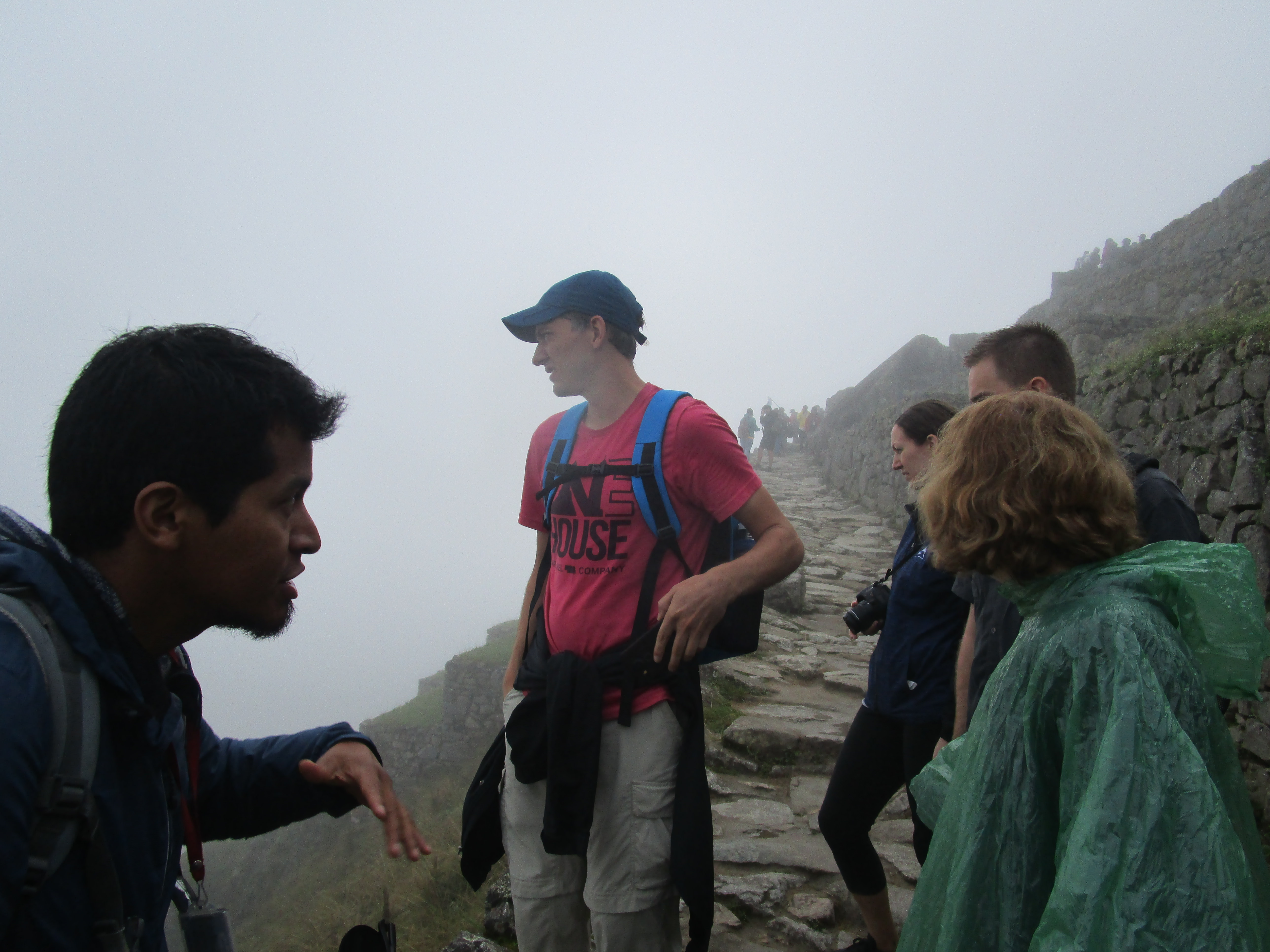 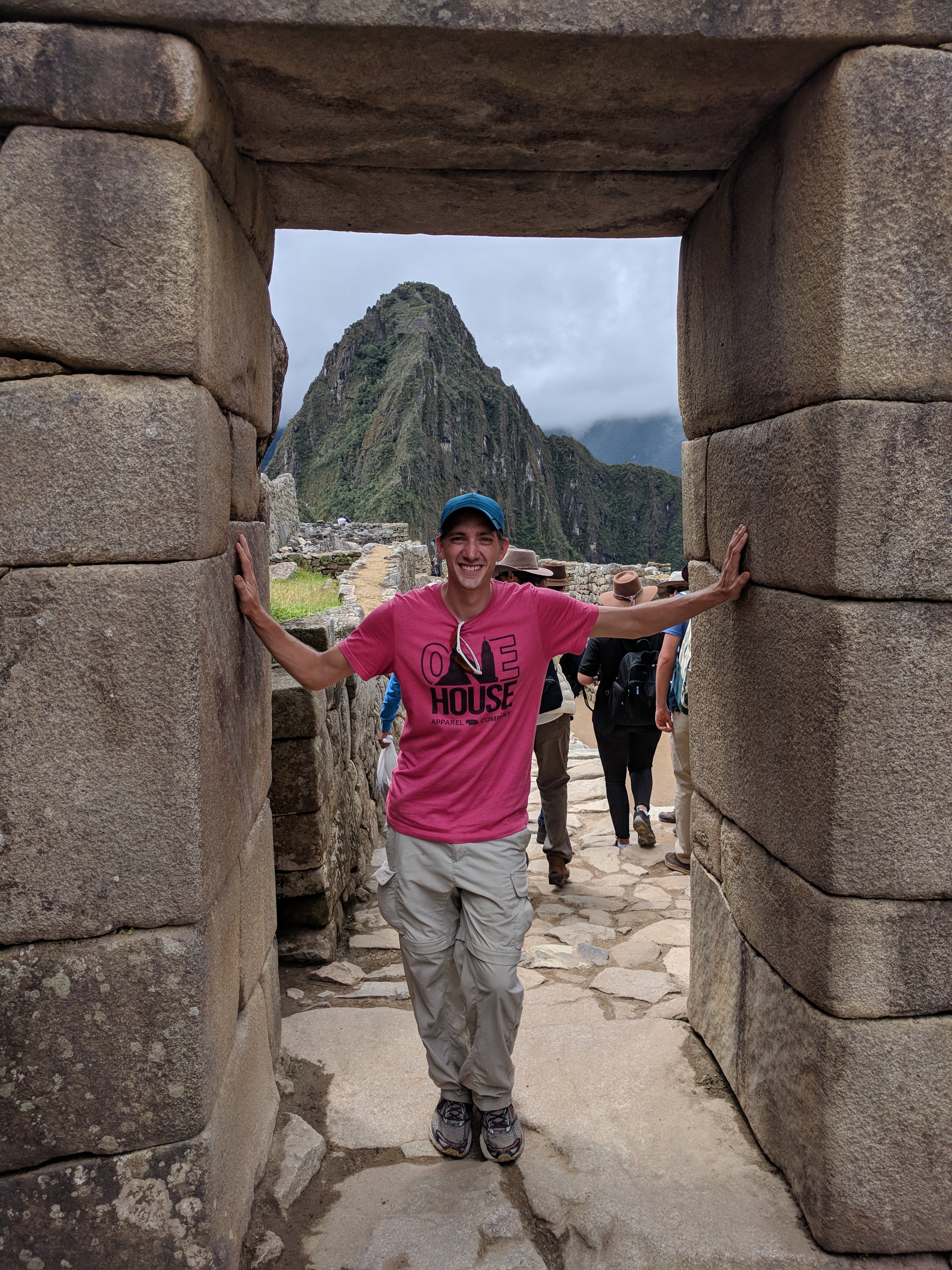 Below is the sacred rock Intihuatana. 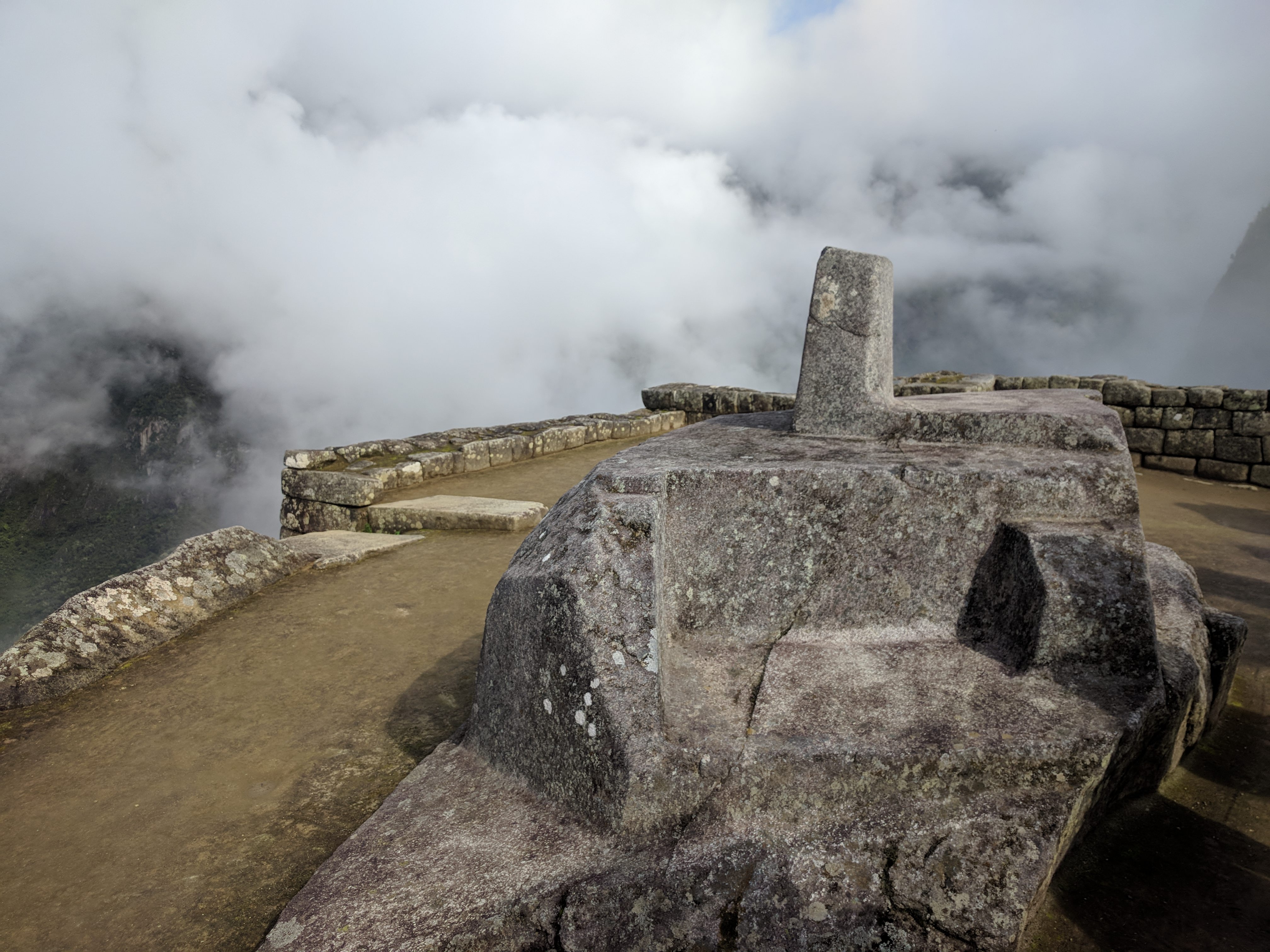 This rock was damaged in the year 2000 when the local beer company, Cusquena, had a camera gantry collapse while filming a commercial. I’ve since boycotted this beer in Peru. More details: https://www.theguardian.com/world/2000/sep/11/sheilapulham 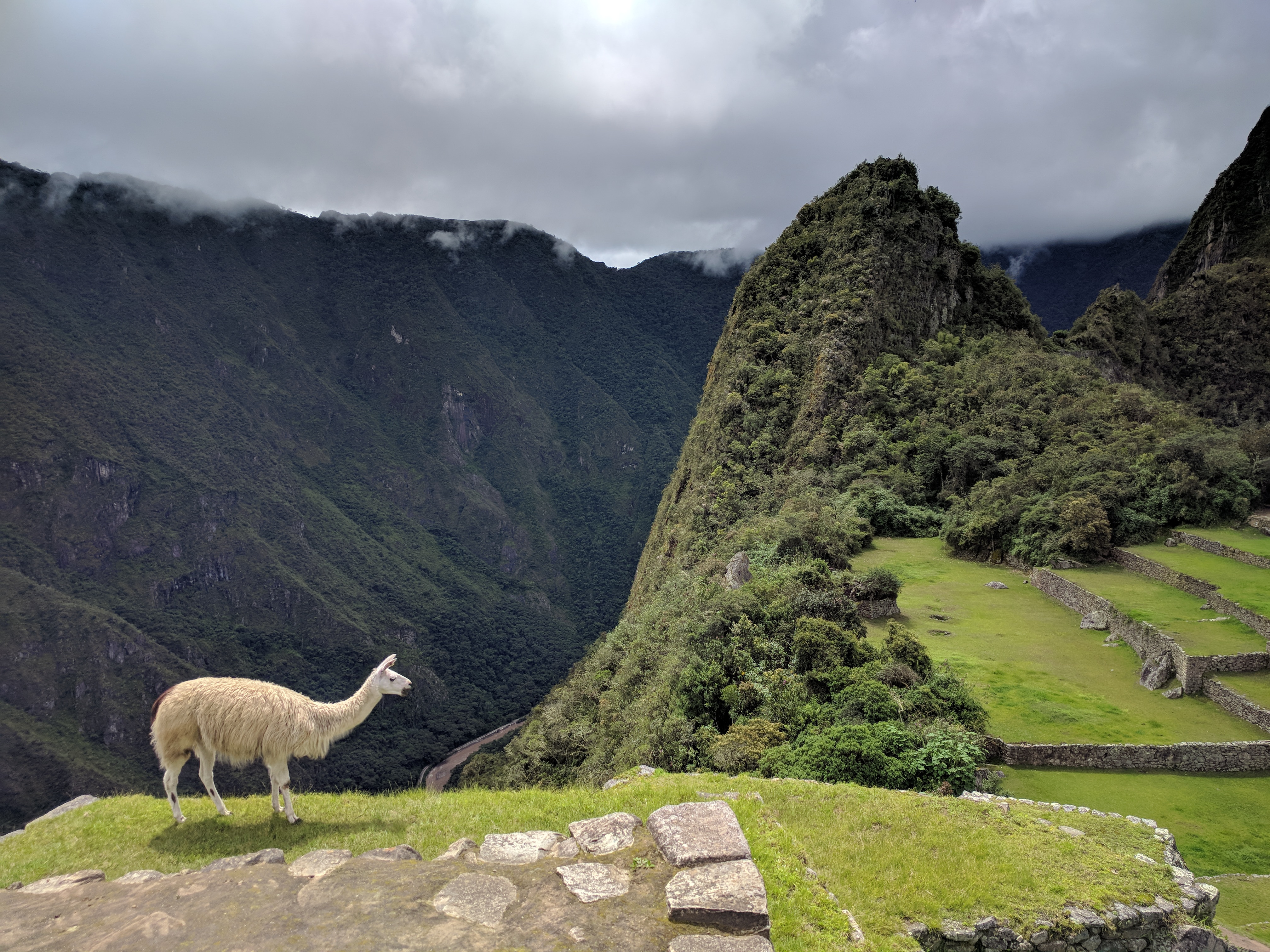 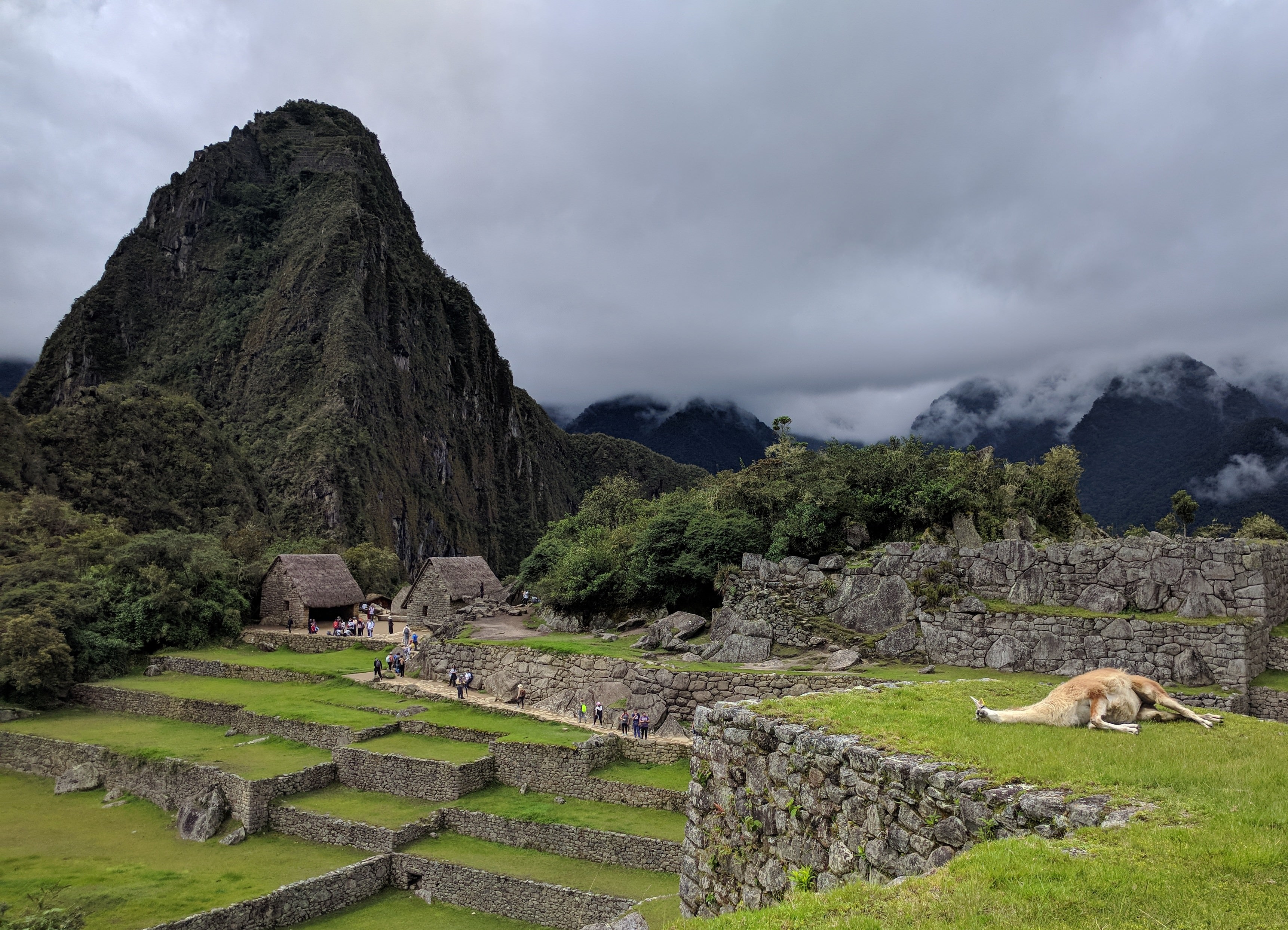 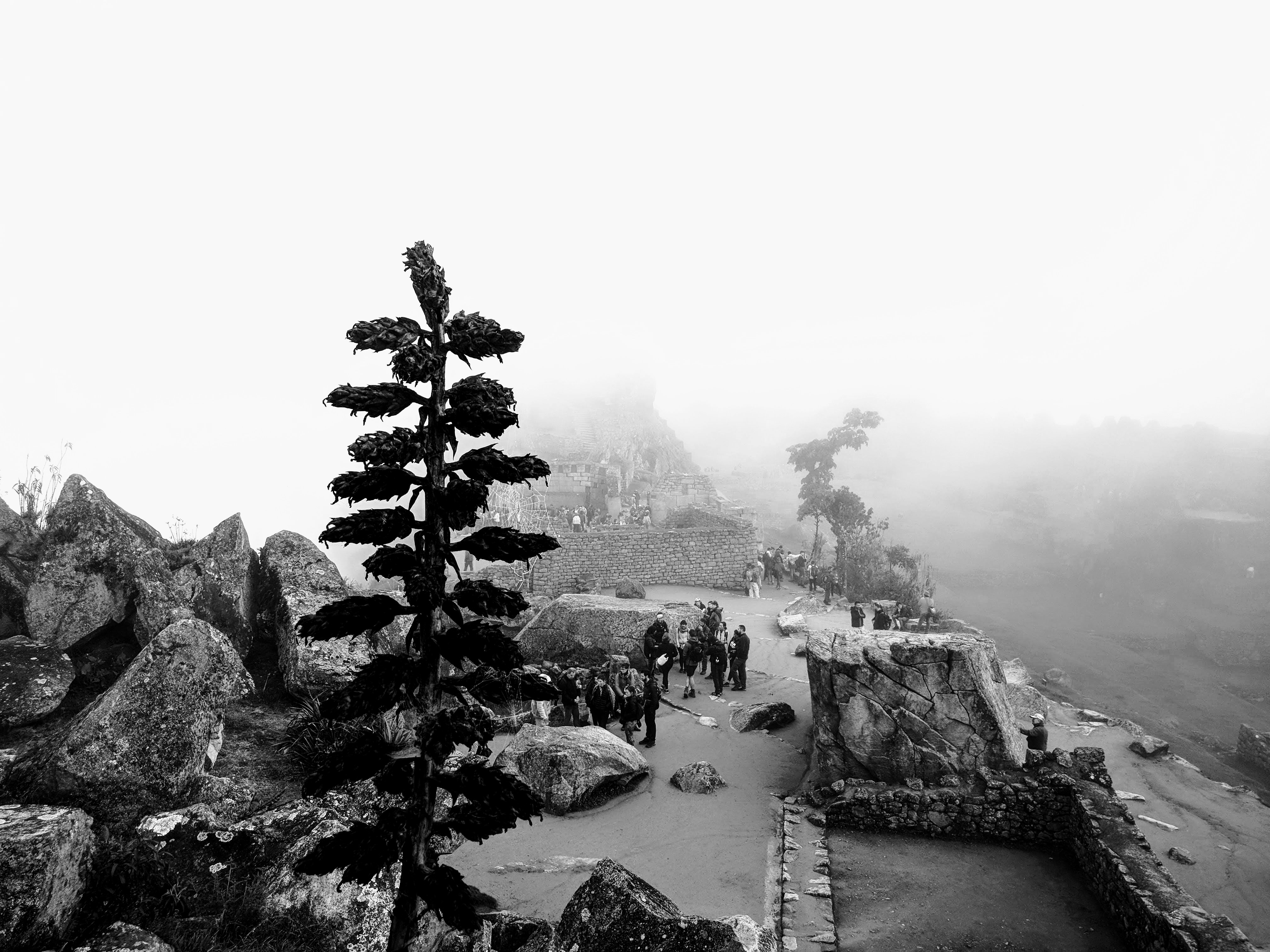 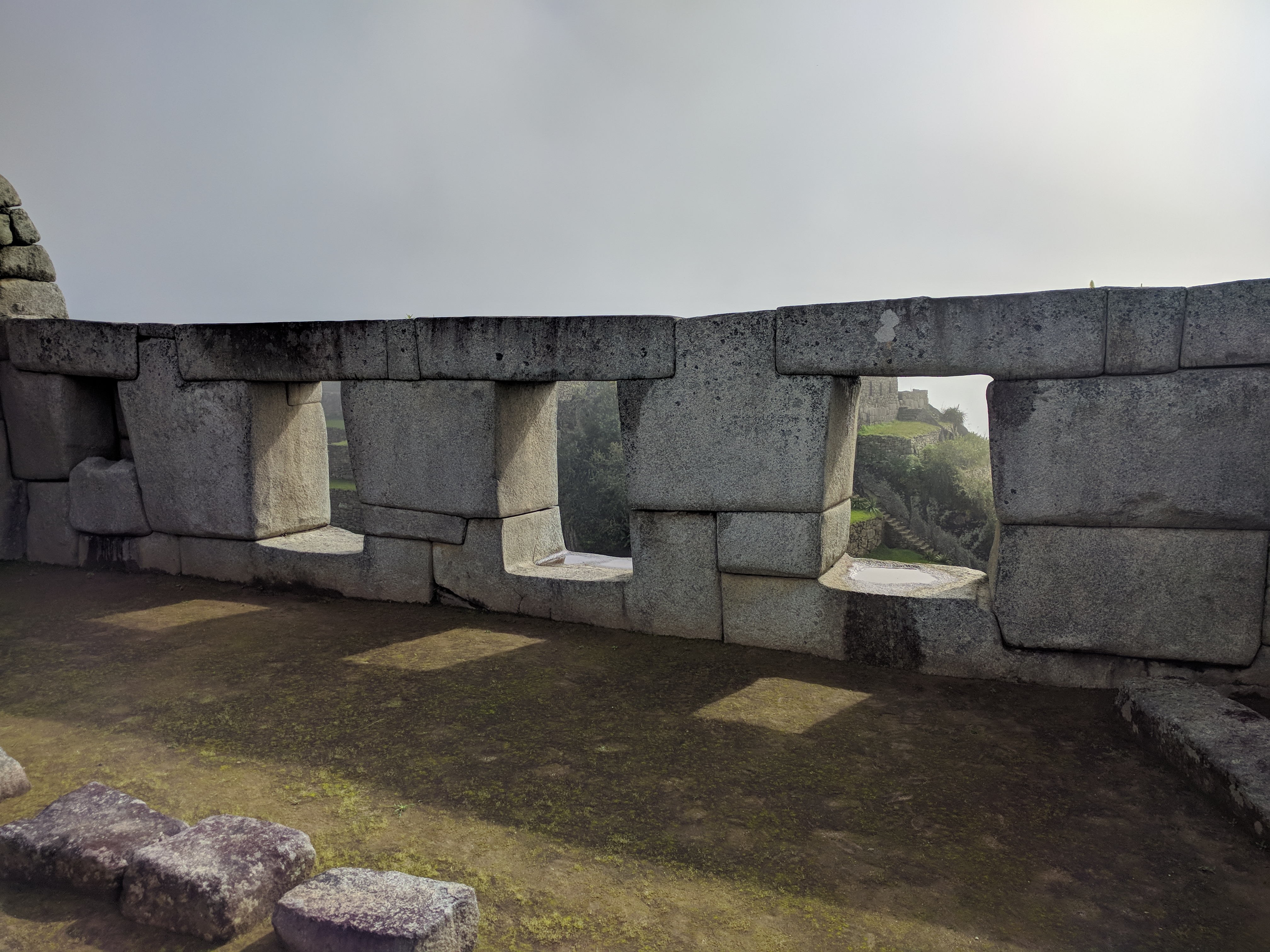 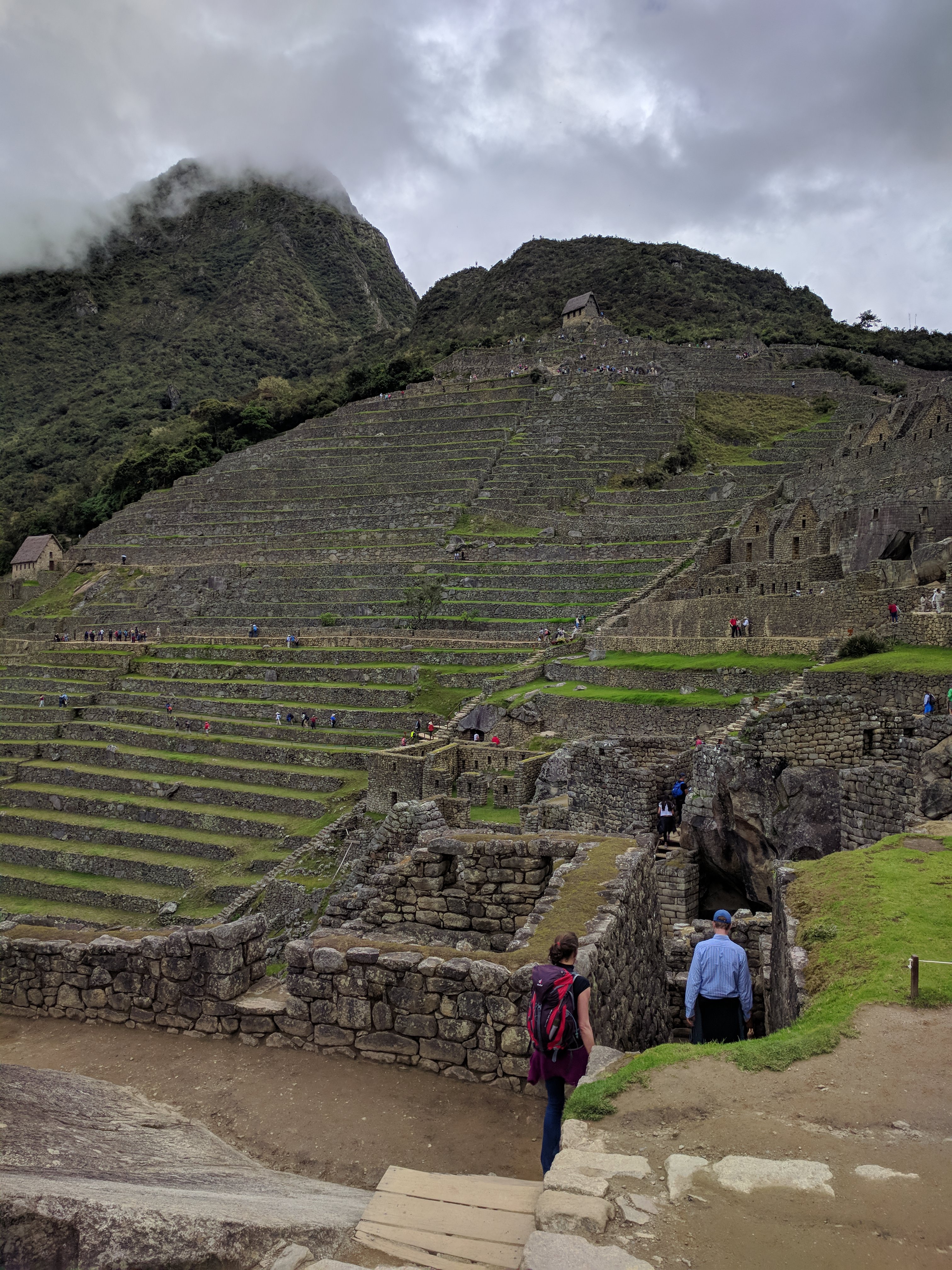 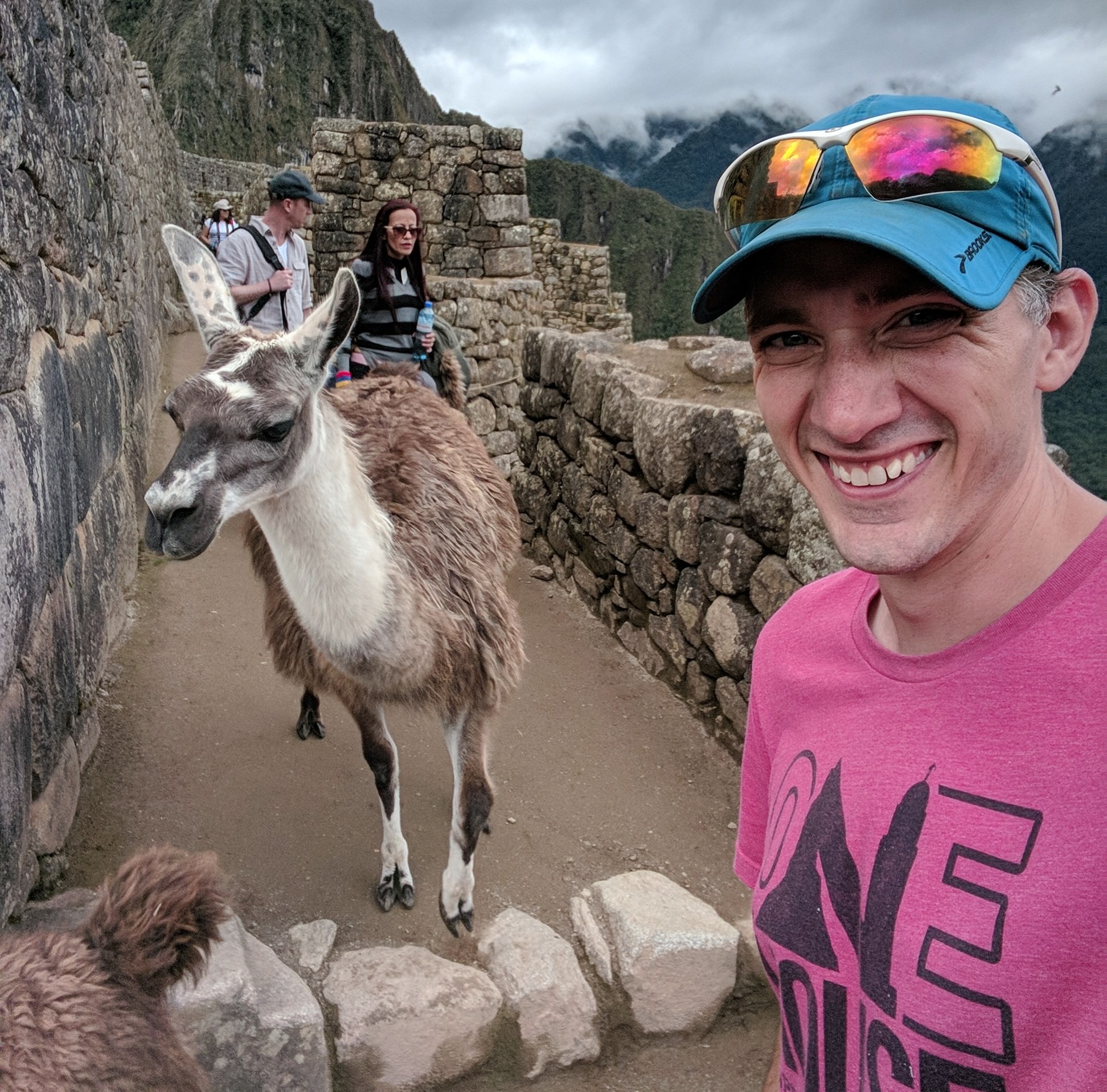 The only thing better than experiencing such an amazing spectacle, is getting to experience it with people whom you love. I am so grateful that they sacrificed the time and money to come reunite with me. The memory of this time will always be a highlight of my journey. 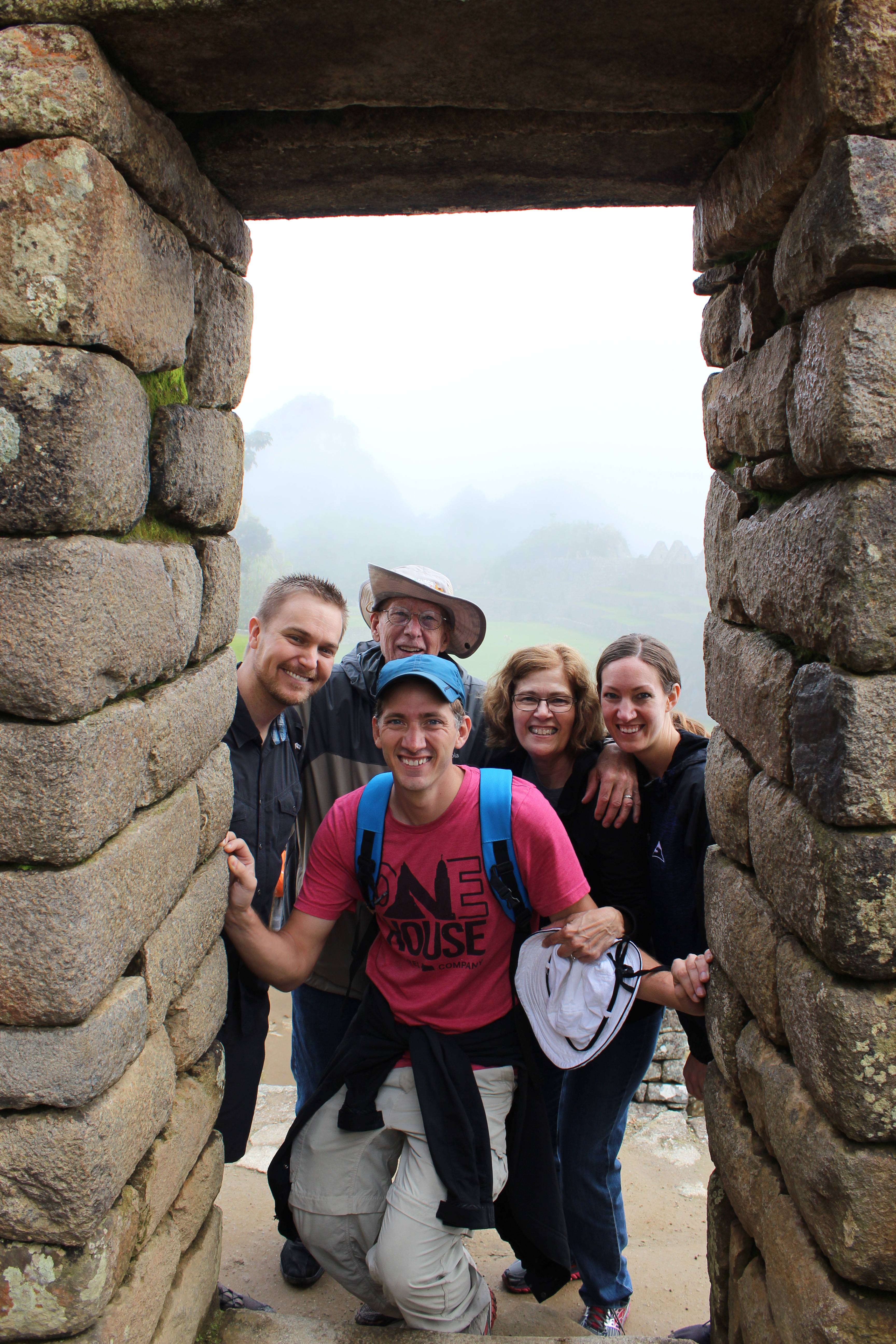 Stay hidden from the Spanish, everybody.

Realtime update: USA! USA! USA! I’m back in Nebraska! It feels good to be home. I realized how much I missed public drinking fountains….and family and friends of course. I’ll be pretty busy while I’m home, but I do hope to get some more catching up done too.