We make our last stop in Peru and cross into country number 13 on our trip, Chile. In this episode we manage to not get bombs dropped on us, get forced to go to a casino, officially become a smuggler and savor forbidden fruit.

We made our way to our last stop in Peru.

In Colombia, it’s a flavor (kind of like butterscotch/caramel). Here in Peru, it is the second most populous city and a major tourist attraction.

I rolled into town at around 1pm and made my way to a hostel called Friendly AQP. It was $8/night, small breakfast included and the parking was relatively secure. 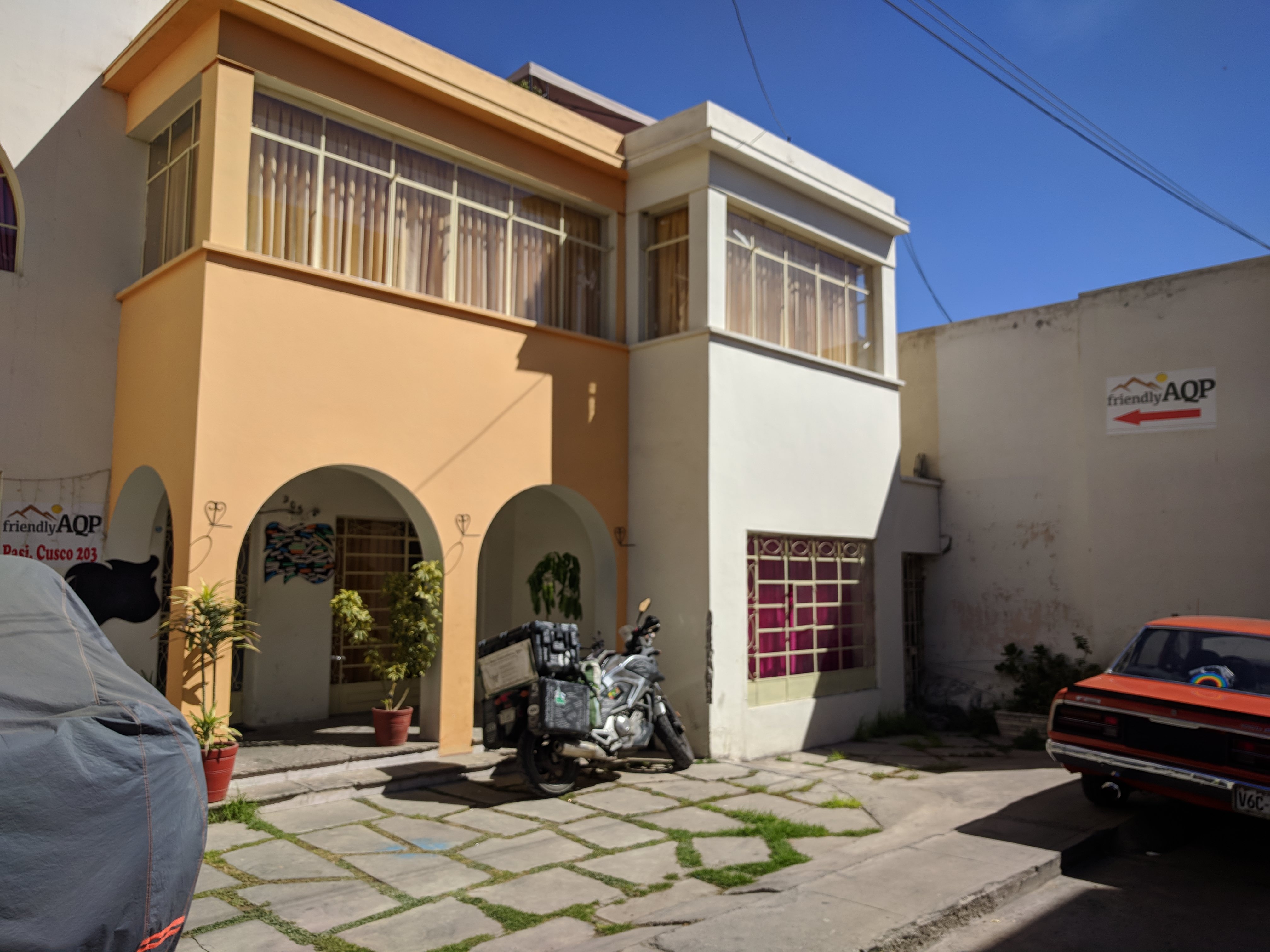 I worked on catching up on some things until the sun went down. Needing to stretch my legs a bit, I walked down to the main square. 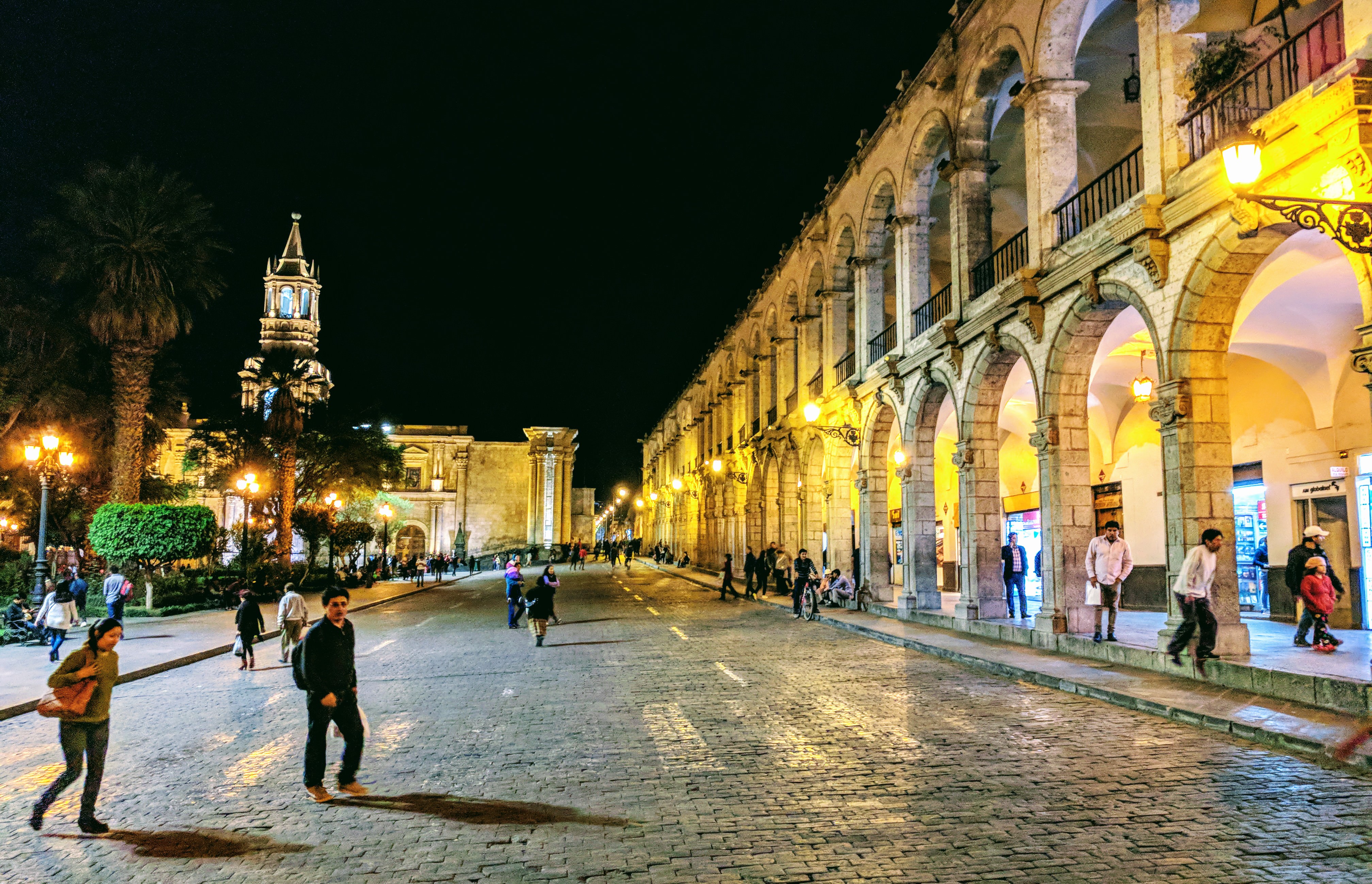 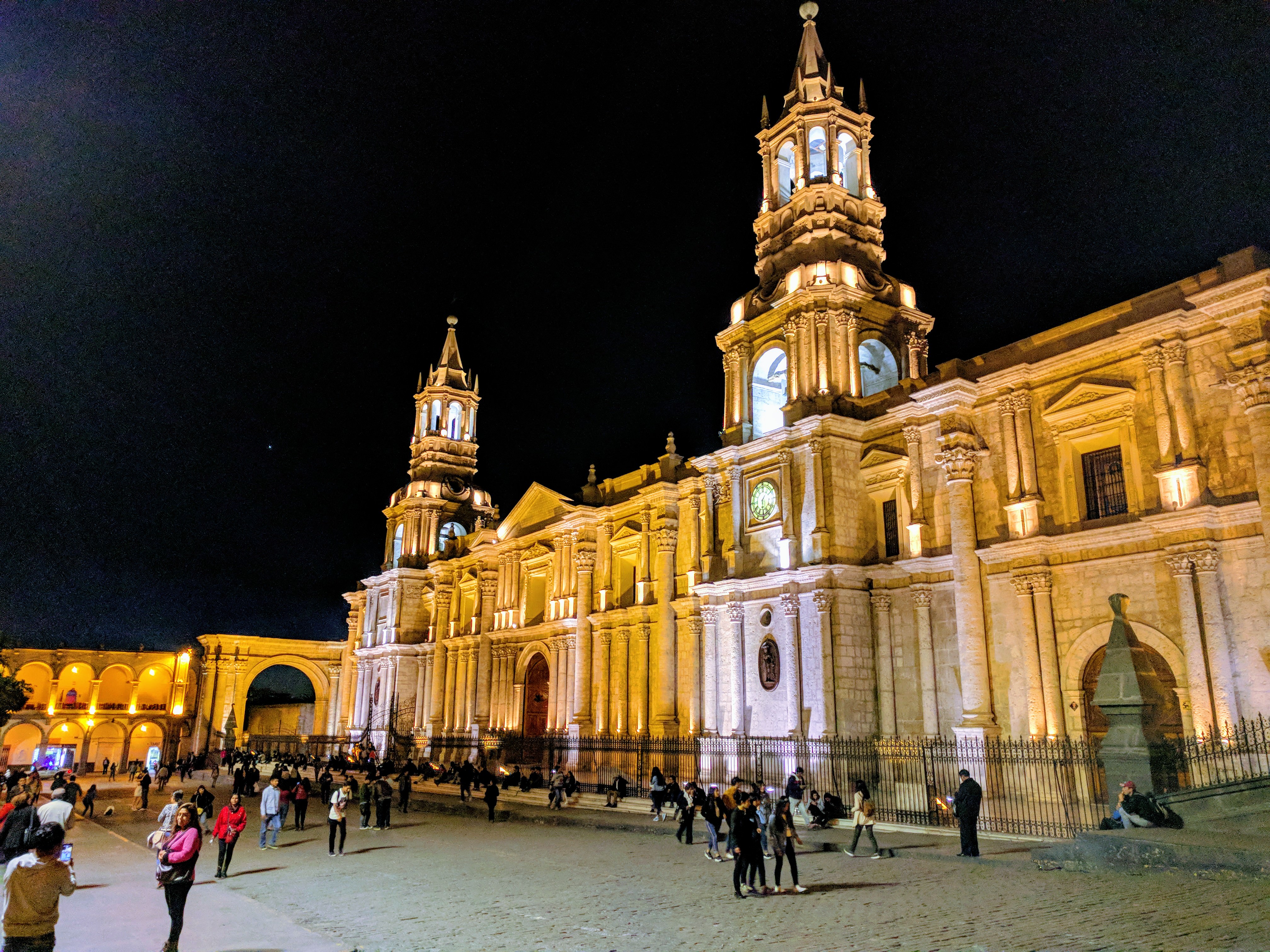 I set out to give myself a more extensive walking tour of Arequipa. The city is watched over by a couple of volcanoes. 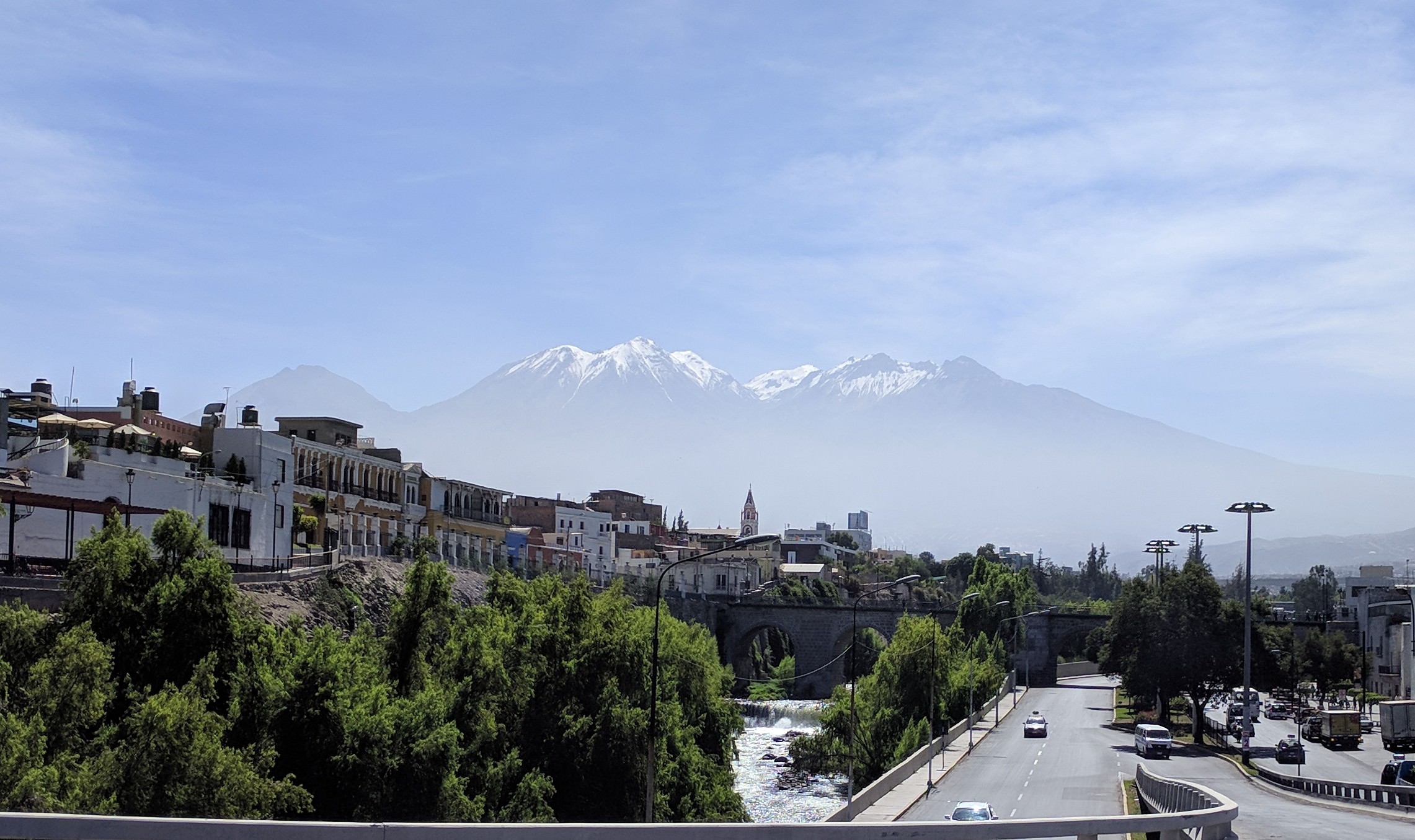 The overlook point on the west side of town was quite a hike and view was just OK. 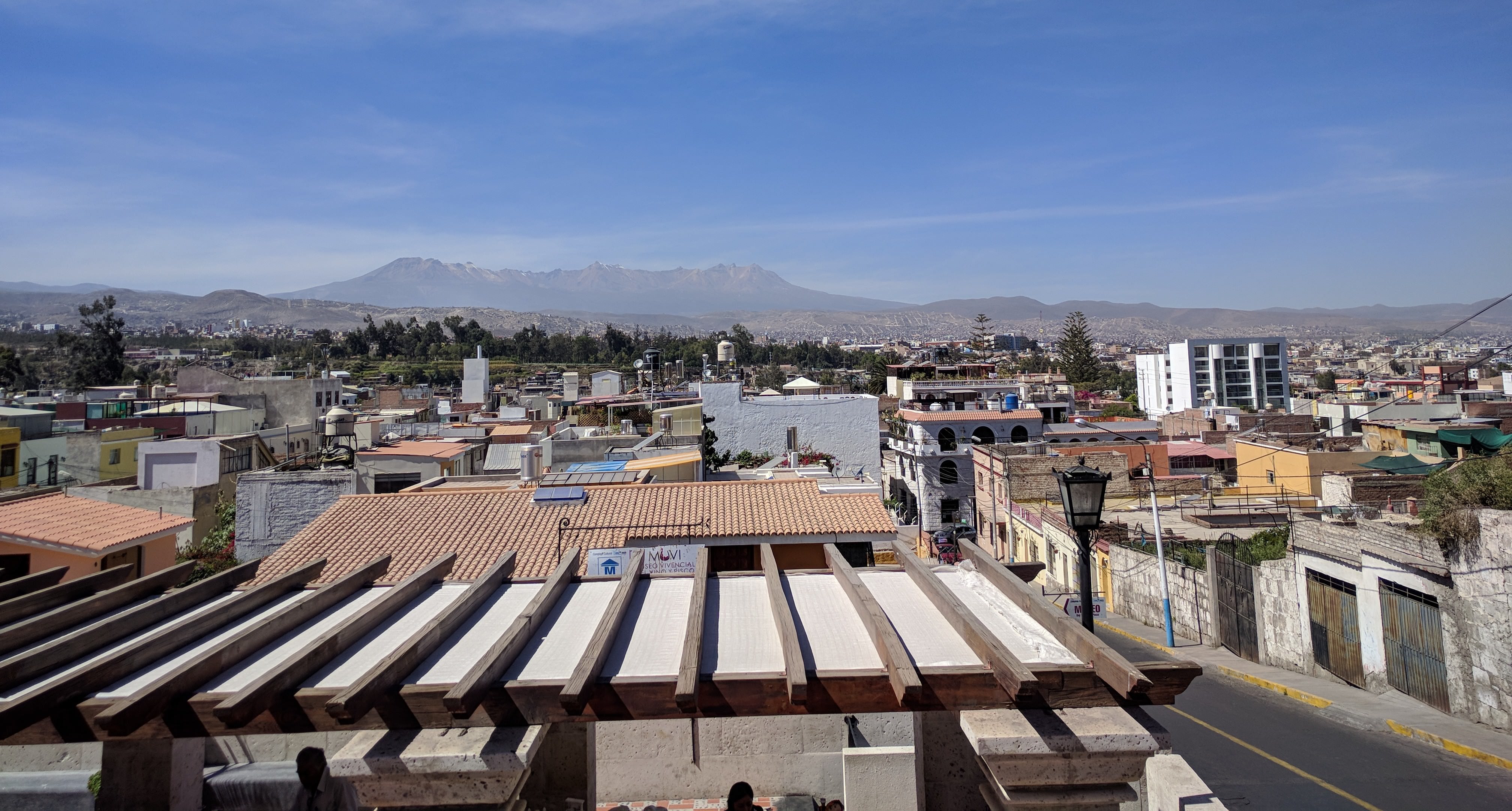 There were some pretty sights up there though.

(header picture is from up there) 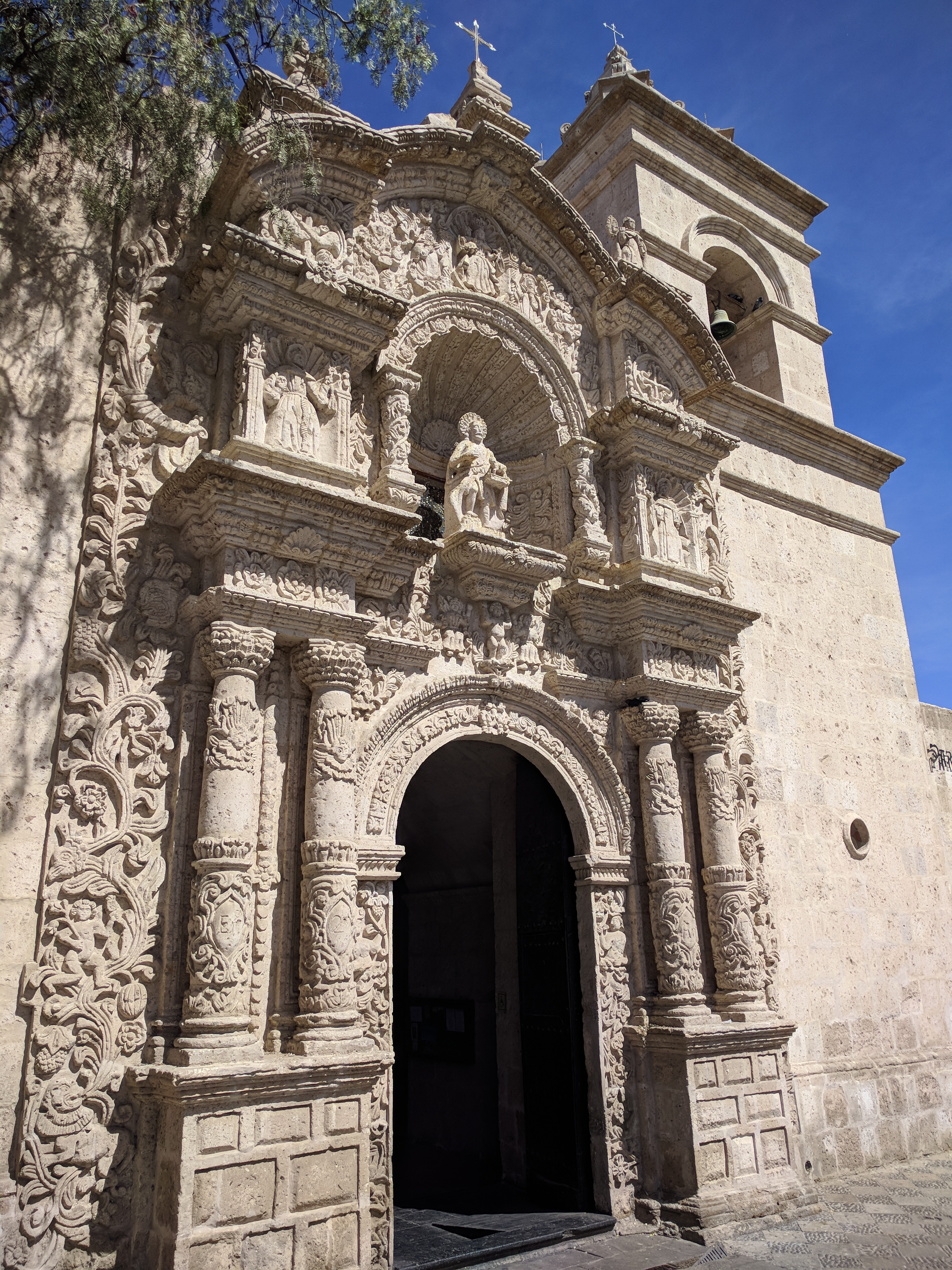 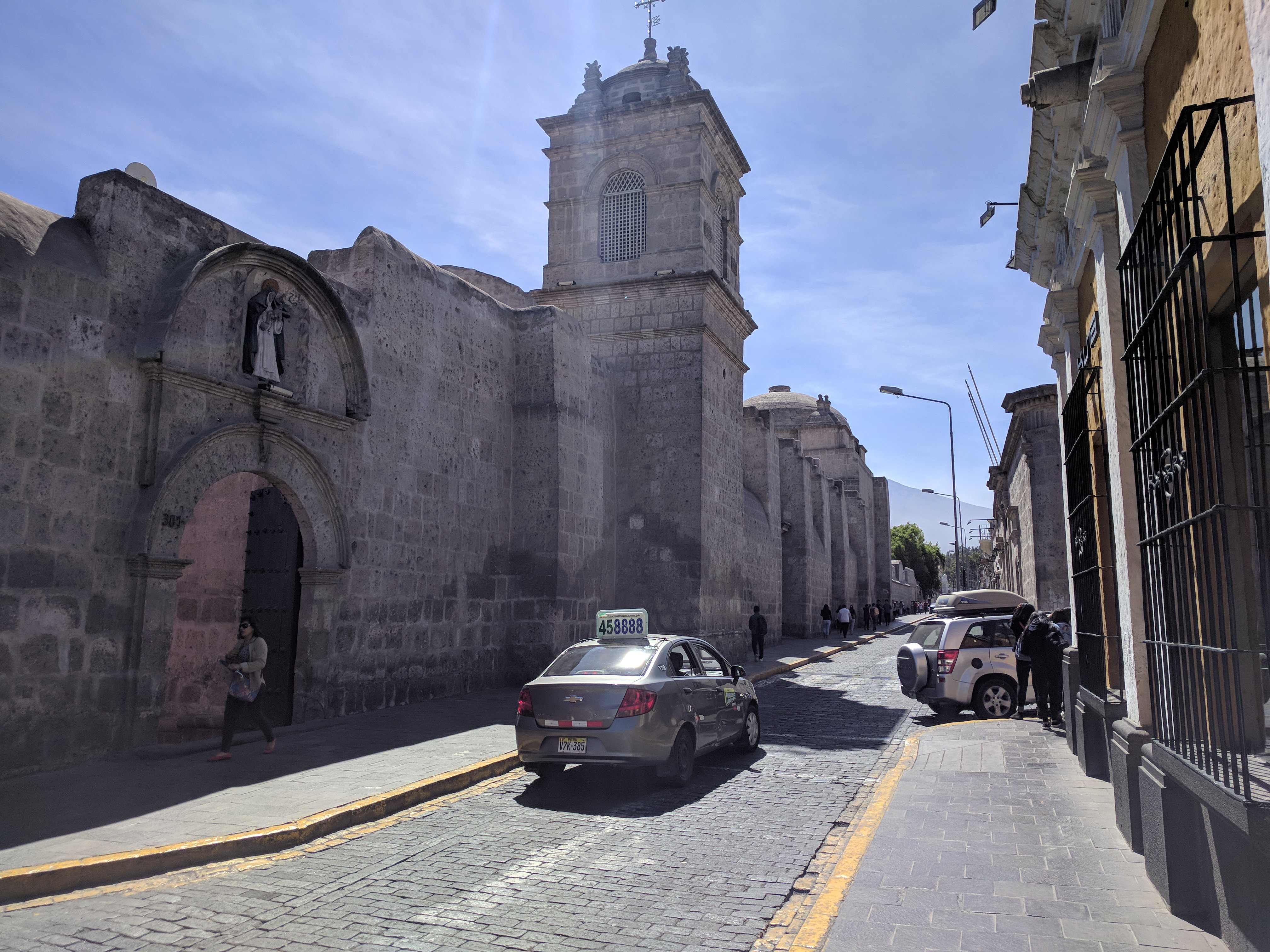 There may come a day when I stop photographing llamas, when they become so common that I hardly bat an eye, when I no longer see anything interesting about them; but today is not that day! 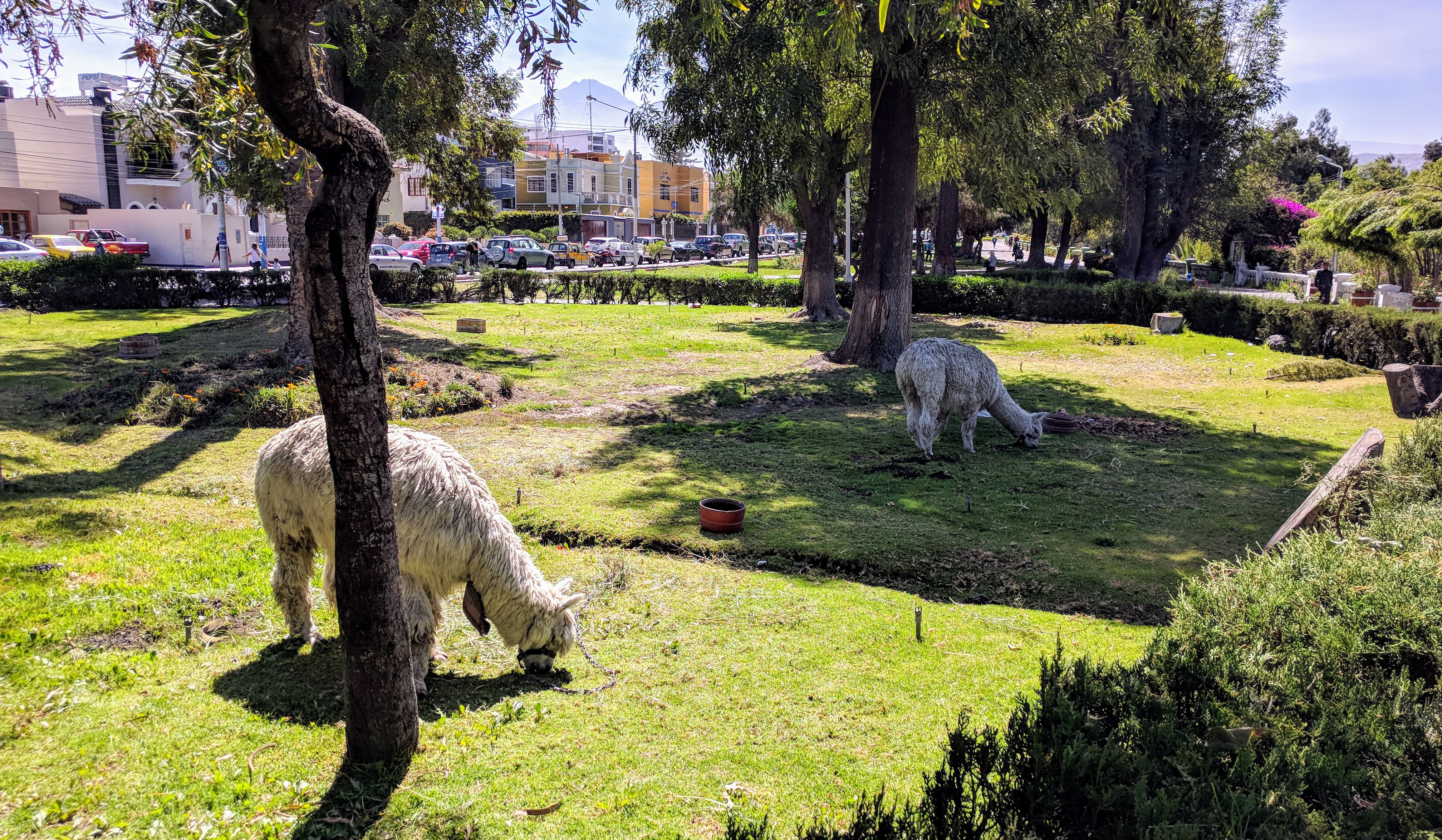 I probably should have done more to experience the city. I think I was just sort of feeling tired of cities. That and I was low on Soles (Peru currency) and didn’t want to take any more out. Undoubtedly, I could have seen much more here. 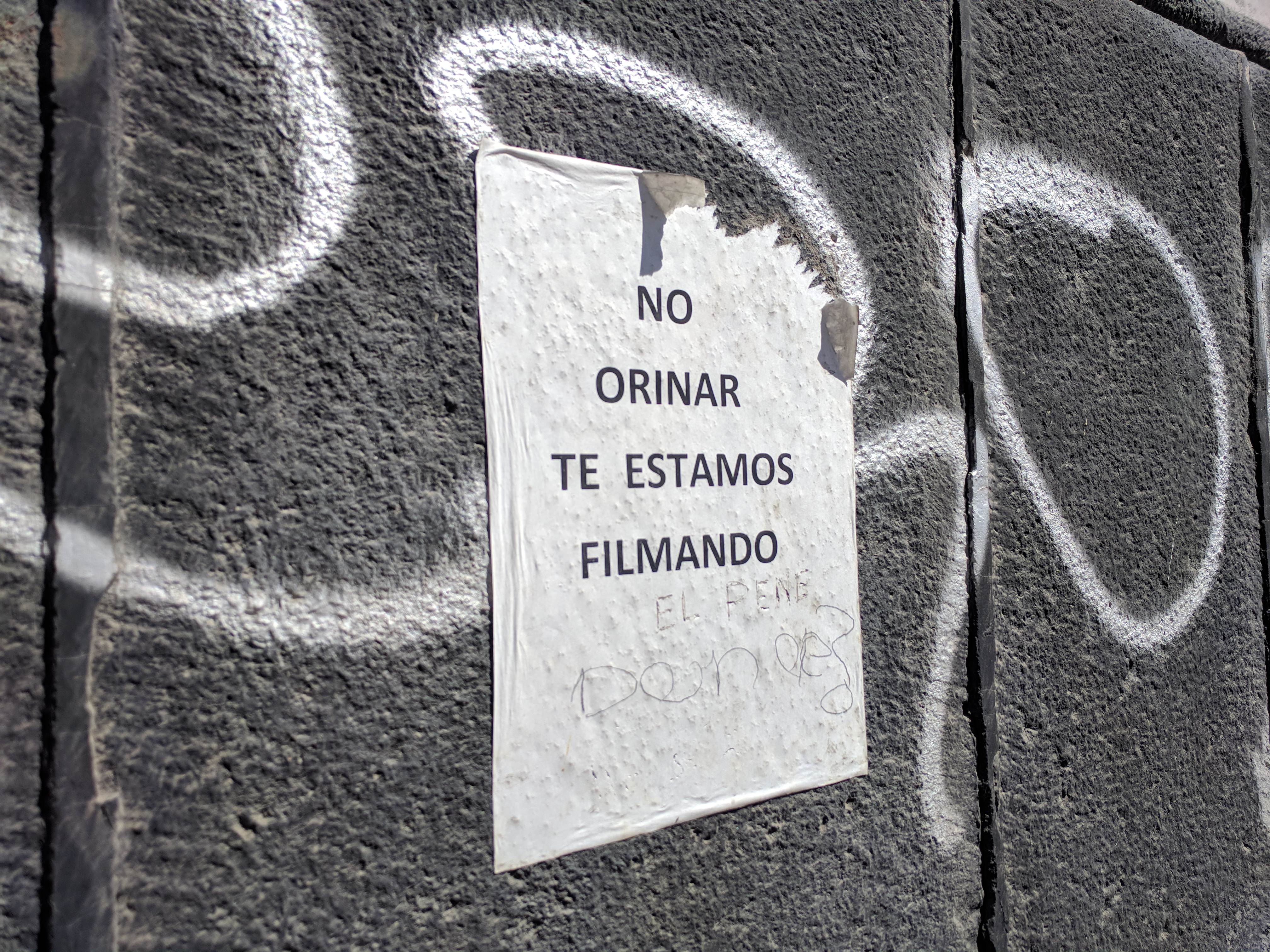 “No urinating. We are filming you.”

Food was cheap here too, with a couple local restaurants offering full meals for about $1.70.

Can we talk about food?

Don’t worry, I don’t have a ton of data to make too many sweeping observations. I just wanted to mention some of things I have noticed.

I don’t want to give the impression that all restaurants are cheap down here. Especially in tourists cities, it is easy to pay $10-$20 for a plate. I prefer to seek out the places where the locals eat. If the chalkboard out front says “menu,” which basically means “meal of the day,” you can probably find cheap food there.

Grocery stores are a different story. Through most of the countries I have visited, I can’t say that there is a big difference between the cost of basic items (bread, milk, eggs) compared to Nebraska. It is very similar. Because of this, I sometimes wonder if it is even worth cooking my own food. The added “service cost” of going to a cheap restaurant is nearly negligible.

This further highlights just how fortunate we are in the United States. The Great Plains may be our greatest gift. They allow a relatively small number of people to produce an immense amount of food at low cost. A citizen of Peru might pay the same price as we do for a loaf of bread, despite having just a fraction of our income.

Back at the hostel, the water had gone out. I really wanted a shower before I departed the next day, but at least we all smelled equally bad.

I don’t know if it has been mentioned yet in this publication, but before I met up with parents in Cusco my Mom had her phone stolen/lost in Puno (a city on Lake Titicaca). She was needing a police report to get reimbursed through her trip insurance, but we’d had no luck contacting the Puno police station. Mom asked me if I would go to the station in Arequipa, just to see if anything could be done.

The staff at the station were helpful, but said that there was probably no way to get a report from Puno remotely. However, they decided they could just type one up there, at least saying what happened. They were so accommodating. 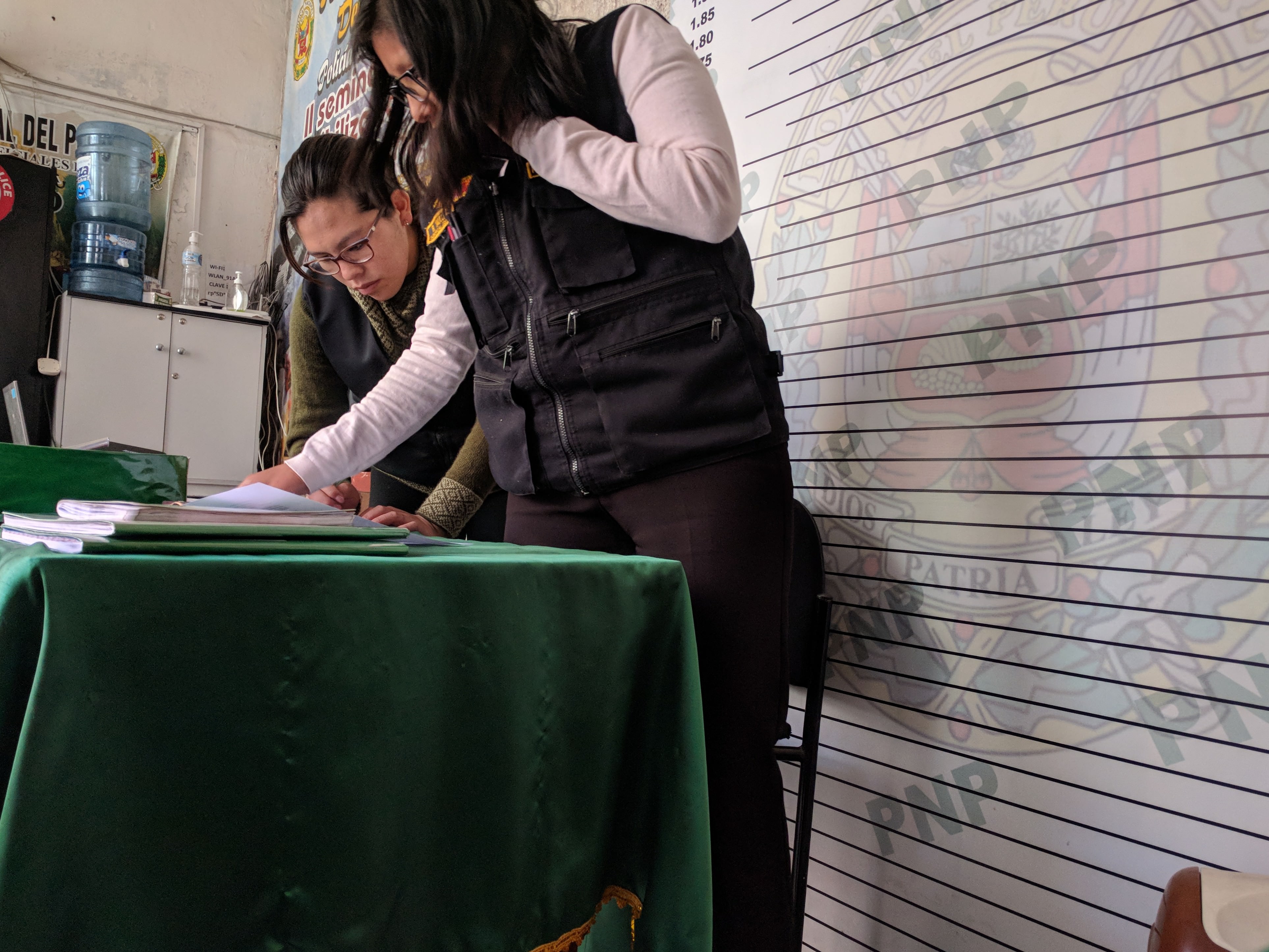 They did ask some interesting questions though, such as my level of education and the first names of my Mom’s parents. Report in hand, I made my way out of Arequipa…or at least I attempted to.

The main highway out of town was totally torn up. I tried many times to catch it further along, but could not seem to find it. I asked people and tried to look at my map, but had little success. A guy in a pickup could tell I was woefully lost and played guide for me until I was taken into the flow of the rest of traffic on a long detour.

This was the final day of my Peru insurance, so I really wanted to reach Chile by the evening.

Hmmm…this is a new one: 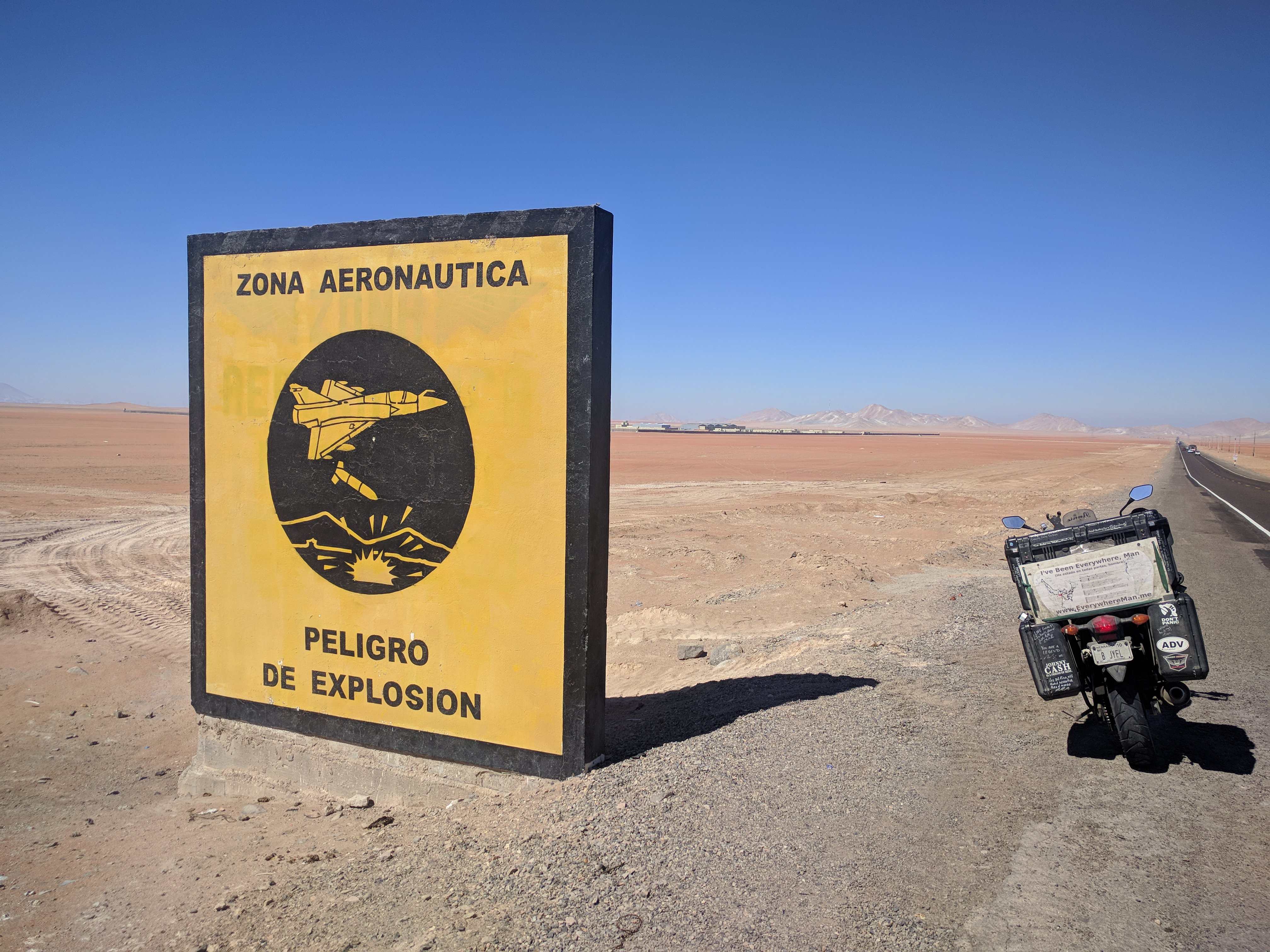 I enjoyed my ride. Some sections were winding with steep elevation changes.

At other points, the road was so straight that it disappeared into the horizon. 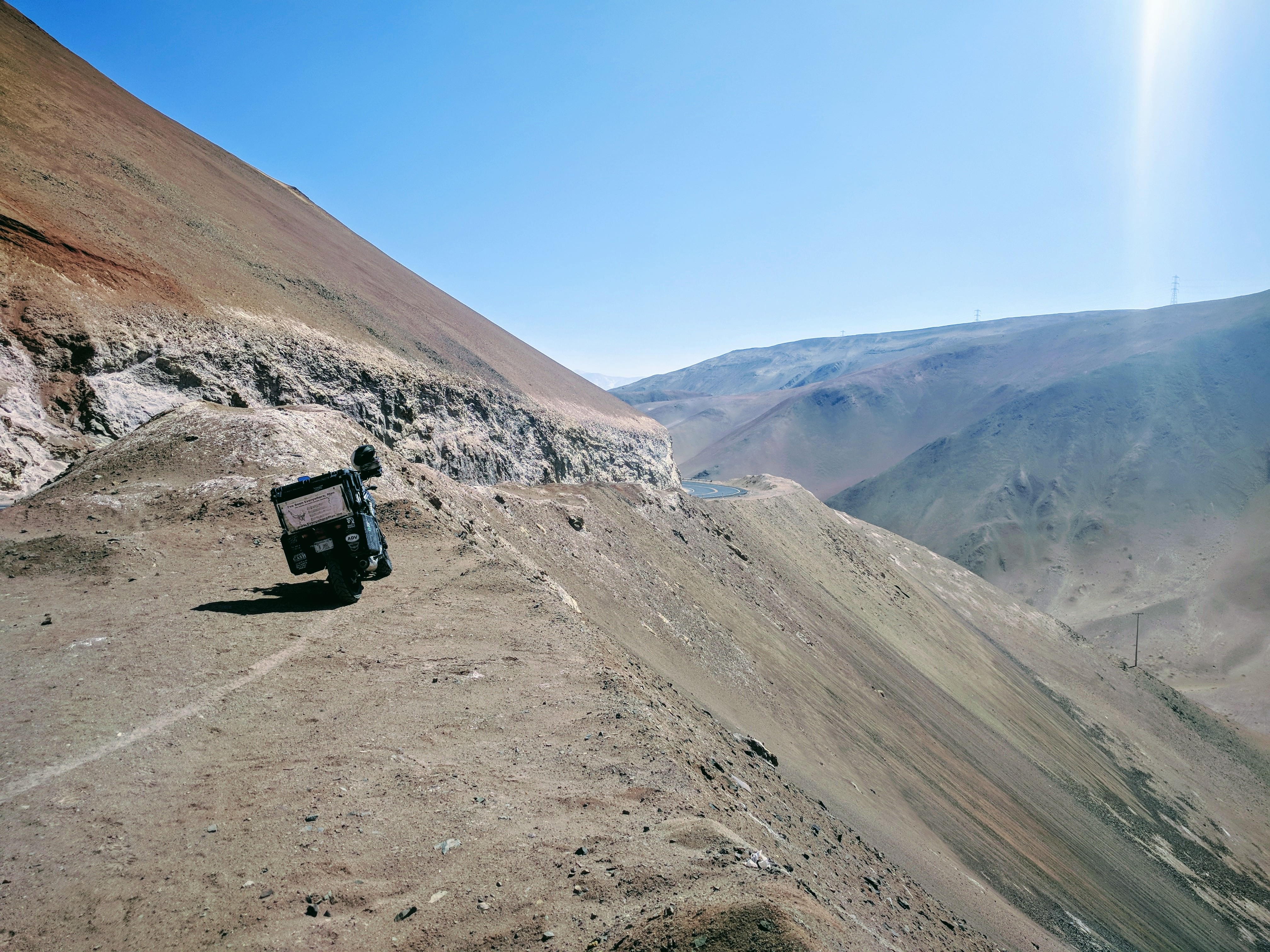 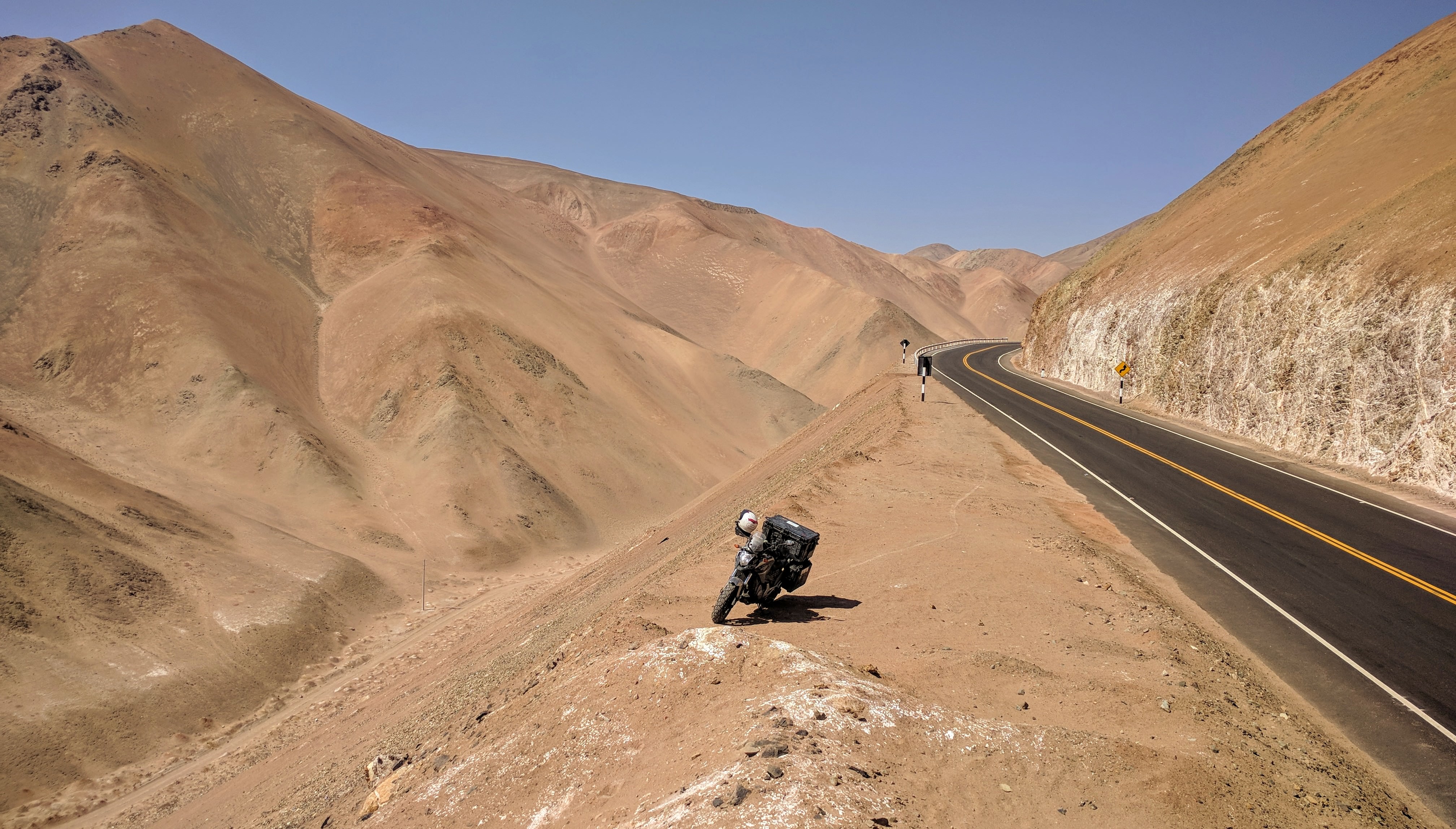 Below was sort of a close call. As I was executing the pass, the semi pulled into my lane pretty sharply. I wasn’t speeding, but the uphill had slowed down the trucks considerably. I always try to be critical of my riding. If I get hit, it doesn’t matter whose fault it is, I’m the one at risk. I should have been more cautious in this situation.

Even through these desolate places, there are lots of little collections of “towns:” Little shacks made of block or grass. It makes me wonder how these people survive so far from resources or civilization. 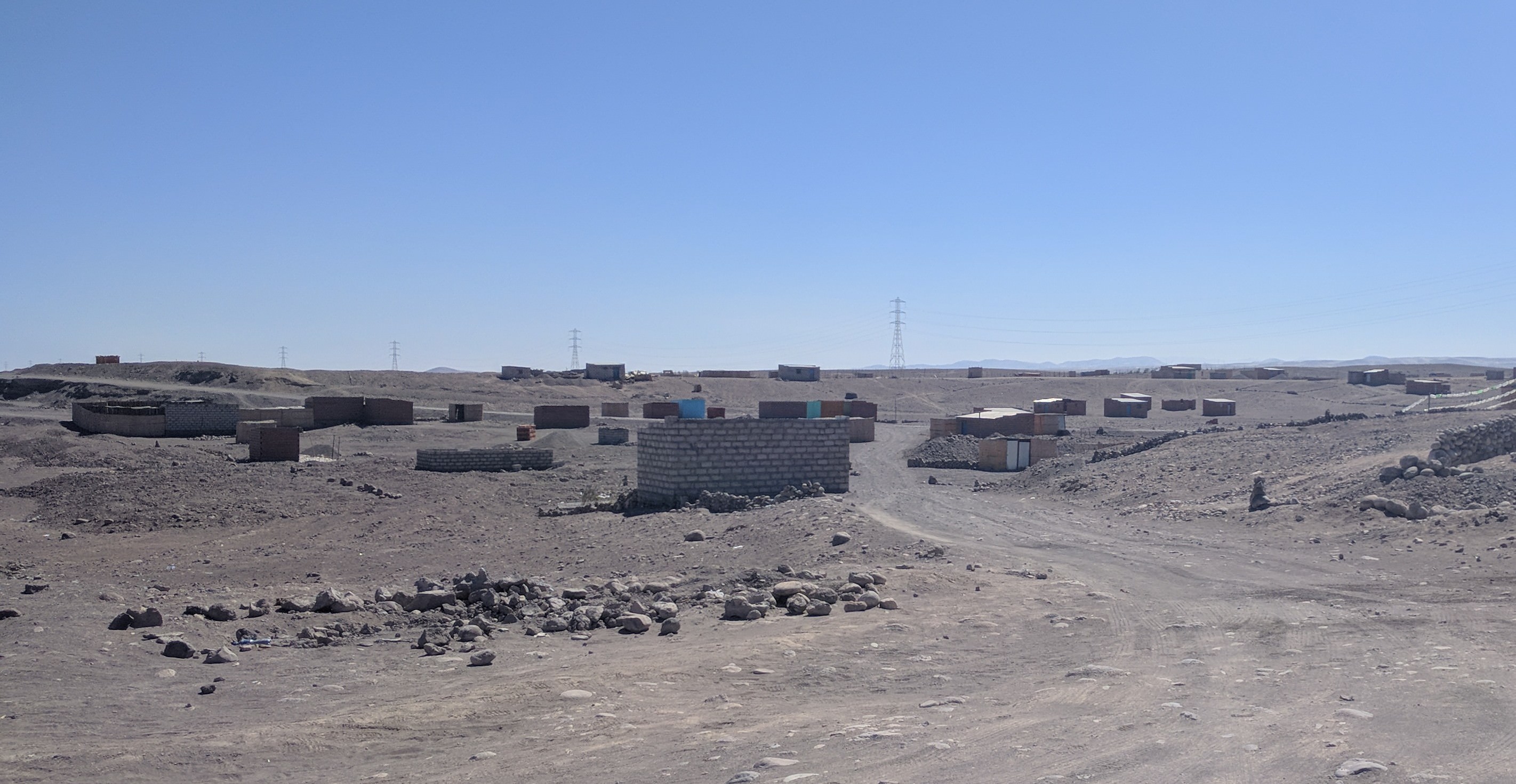 I had mixed feelings about leaving Peru. My experiences there really ran the full gamut. I met some wonderful people who were so generous and kind to me, but also encountered those that wanted to scam me or denigrate me. The roads were a good variety and well maintained, but the drivers were absolutely wild and dangerous. The cost of food and lodging is a real treat for a visitor, but the extreme poverty of some of the people is hard to ignore.

If I return by land, I will likely see a whole different side of Peru. I will take the mountainous central route rather than the coastal one. Perhaps after that, I will be able to evaluate this country more comprehensively.

…OK…before we go any further, I need you to stop pronouncing it “chilly” in your head. CHEE-leh is a much better approximation. Thank you. Moving on…

The border here was supposed to be an easy one. Accordingly, I hadn’t done too much preparation. After parking, I was a little confused. I talked to a few people and eventually got set straight. I hope you’ll forgive my confusion, being that the first place I had to go was to the casino.

This word must have a different meaning in Chile. In Peru, it is the equivalent of our English word. This casino was just a little cafeteria on the second floor of the building on the left side of the screen: 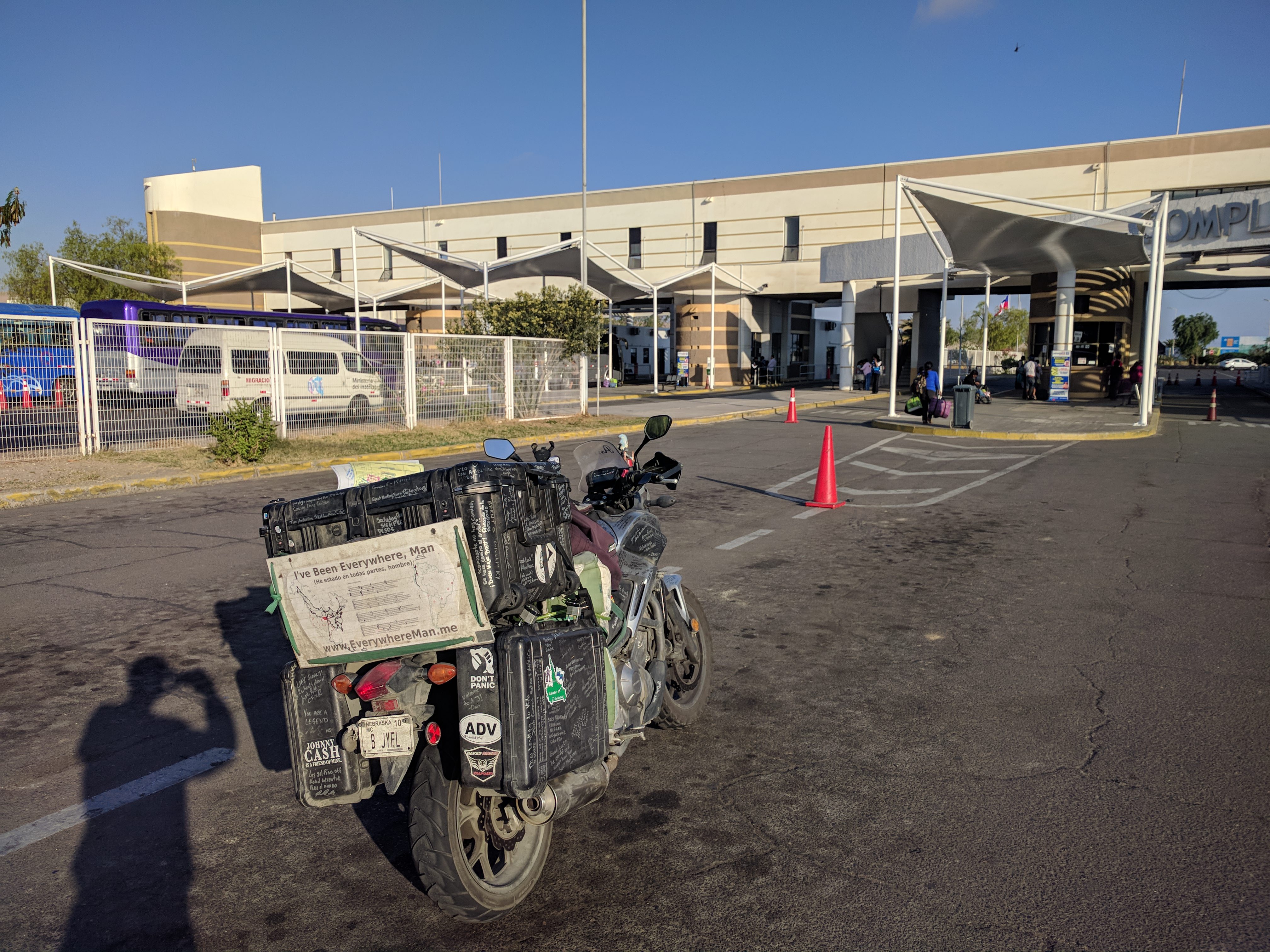 You pay the lady behind the food counter $2 to get a form that you fill out. Why you pay this lady, I have no idea. This was the only part of the process that was really confusing.

I returned to do migration stamps in the building in the center of the frame below: 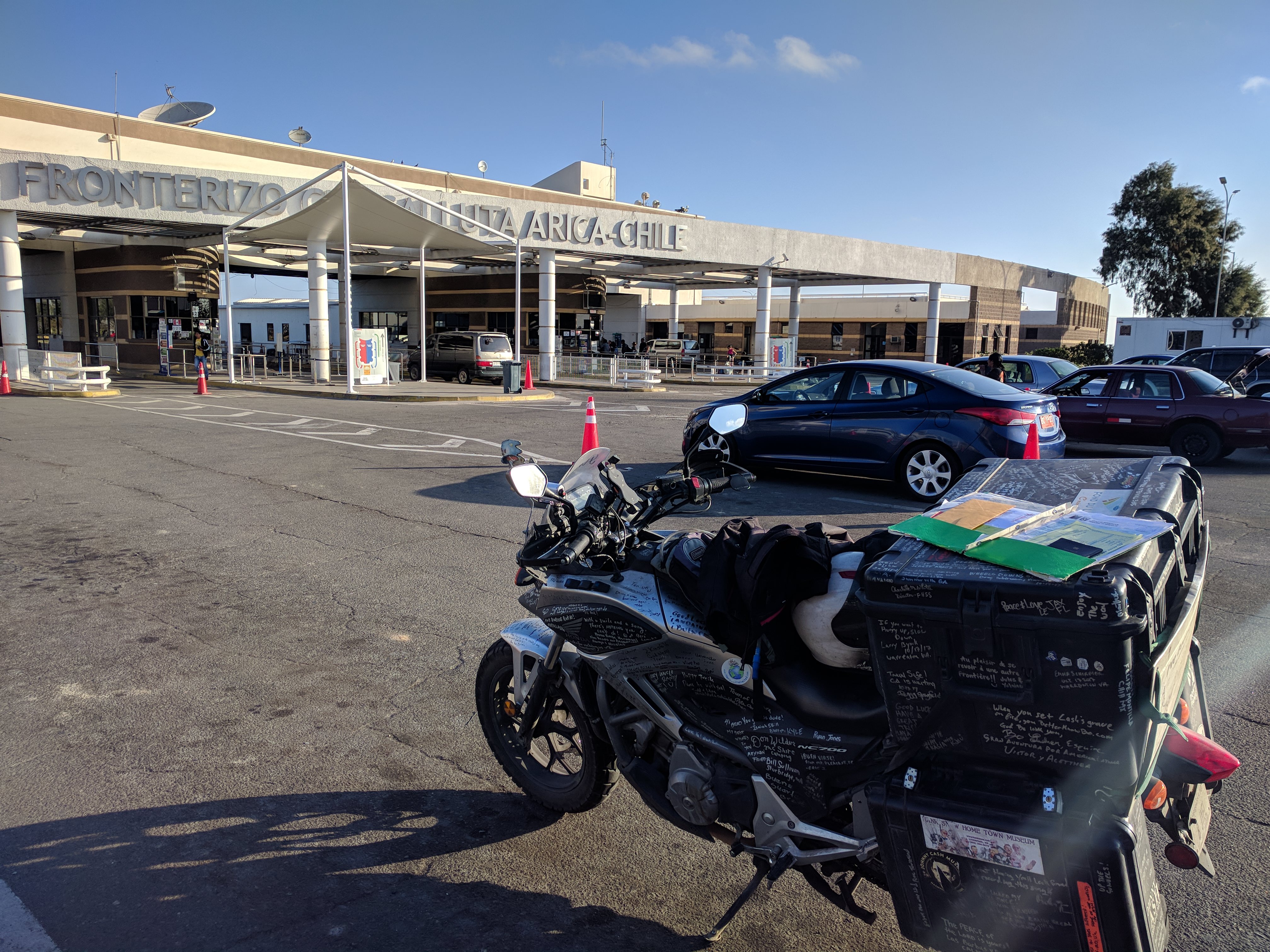 This is the most convenient border I have visited. Both the Peru and Chile officials have their offices in the same building. I got my passport stamped out of Peru and in to Chile and began the vehicle import. It was fairly straight forward as well.

There was a whole platoon of people wearing green vests. They didn’t seem to be doing too much. When it came time to actually cross through the barrier, I learned what they were looking for. Drugs? No, those aren’t that serious. Weapons? Pfff…child’s play. These brave inspectors were after truly dangerous substances: Fruit.

The head guy asked me if I had any. I responded nonchalantly, “No creo.” (I don’t believe so) This was not a good response. They went through all of my cases. During this shakedown, I realized that I had two Peruvian apples hidden in the frunk. I decided that mentioning them at this point would just cause more trouble, so I officially became a smuggler (my resume is really filling up recently).

I eat a banana almost every day, and I’ve developed quite an affinity for mangoes as of late. Still, I think we can all agree that no fruit is more tasty than the forbidden sort. 🙂 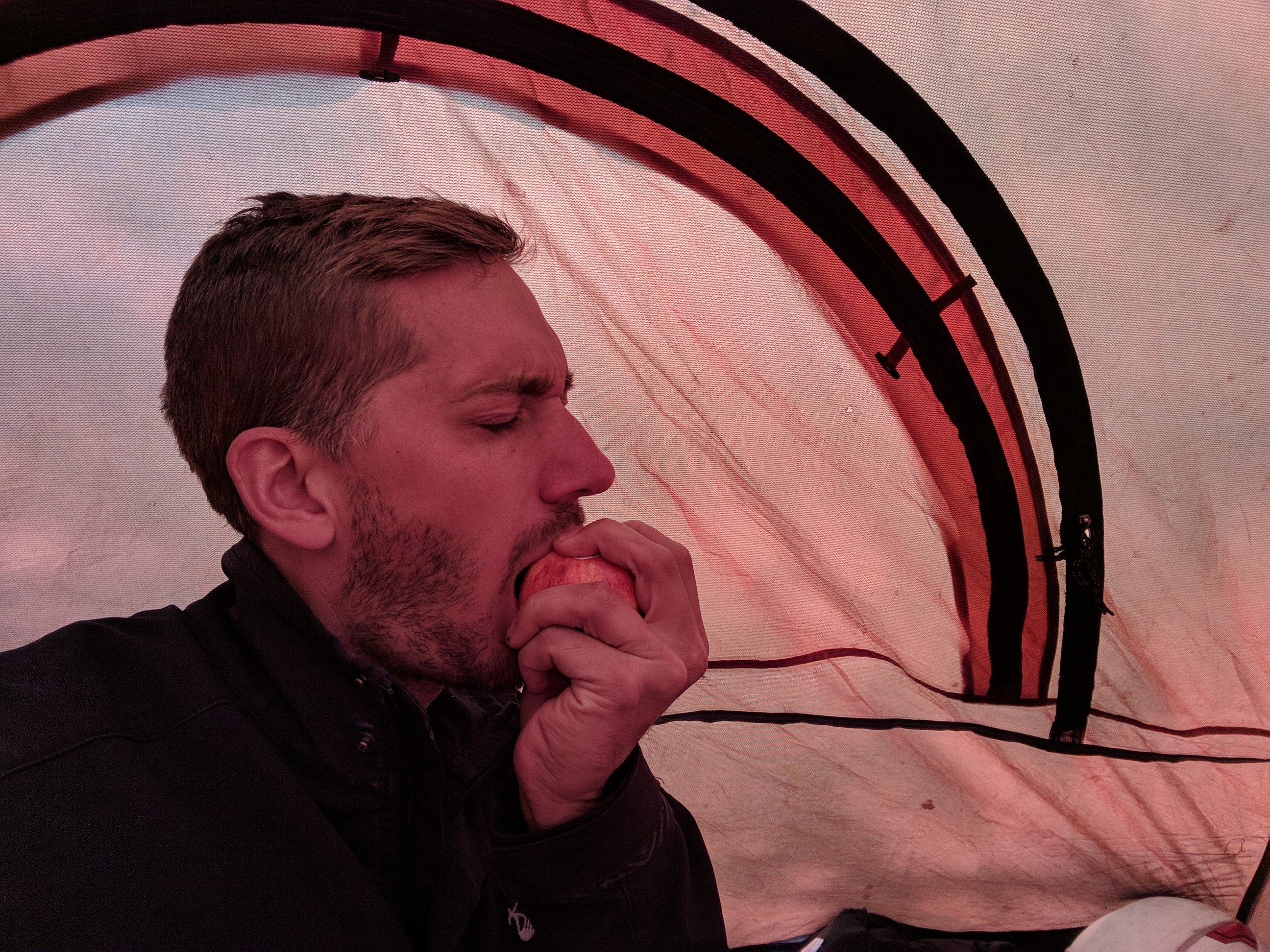 Daylight was waning, but thankfully I only had a short ride to the first city in Chile, Arica. I stopped at an ATM to get some Chilean Pesos, then began looking for a place to stay.

The hostel I stopped at was well reviewed and looked like a nice place, but it was full. I didn’t find any other good budget options. I debated riding out of town and setting up my tent, but thought better of it. It was my first night in a new country and I needed a shower and some internet.

Other traveler’s have noted that coming into Chile is almost like leaving Latin America, even comparing it to Europe or North America. For me, I did not feel this way. There were the same dusty streets, stray dogs, random piles of trash, security bars on all of the houses and businesses. However, one thing really stood out as being different:

I made my way to Hotel Sol de Arica which advertised a special rate for motorcyclists. The lady called her manager to verify, then told me the price: $39. I almost left, but I didn’t have enough daylight to find anything else. Ouch! This was a hard hit to my budget. 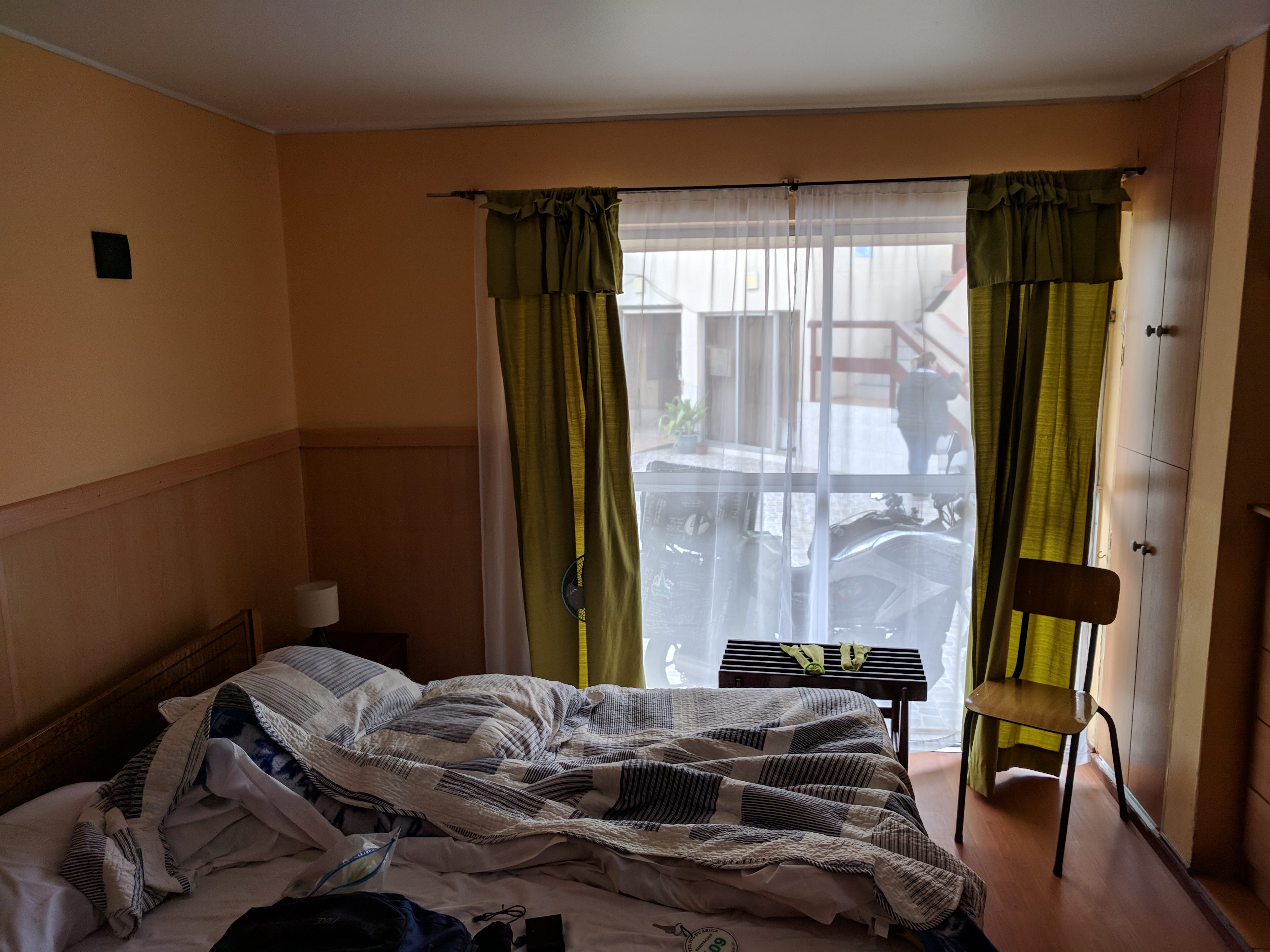 The room was pretty nice, but I realized soon that I had a problem. Color me ignorant, but I did not know that Chile used different sockets. 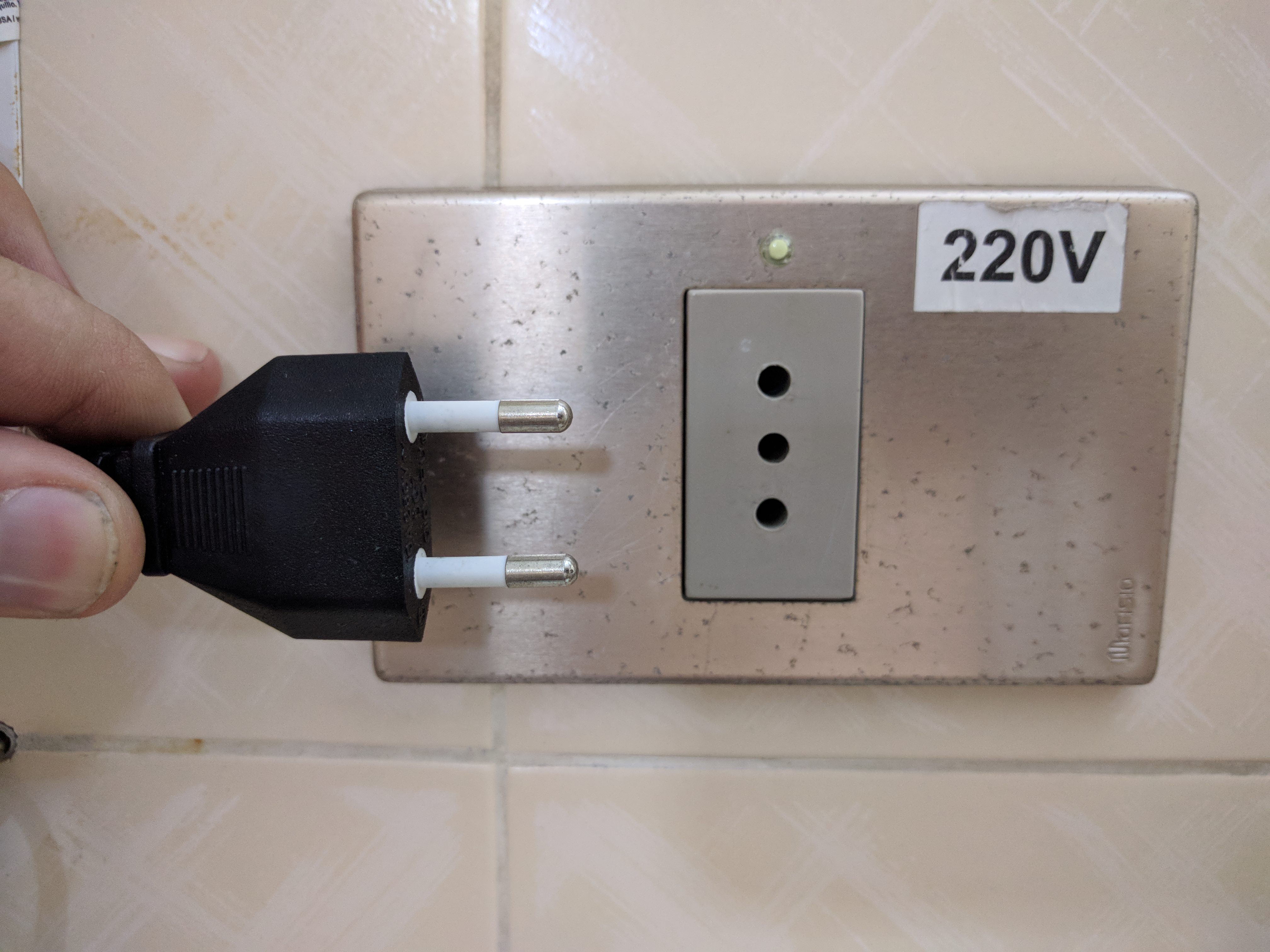 I tried really hard to get an update done, but I lost the race against my laptop battery. All of these inconveniences could have been avoided had I arrived an hour or two earlier. Though I’m very far into this journey, I’m still learning. 🙂

I’ll leave it there for this time. Next time we will delve deeper into Chile and do something which has become a rarity recently: Visit a song place! As always, thanks for coming along on my journey. It’s nice to have company. 🙂

Always hide questionable items in the frunk, everybody

Realtime update: I’m in the middle of the desert in northern Chile, San Pedro de Atacama. Internet has been a real struggle in this country so far. I apologize if I get behind again. I think I’ll stay here two more nights, then I think I’m going to go straight to Argentina. I’m doing well. How are you?

12 thoughts on “Eureka! Arequipa and Arica!”