We celebrate one year on the road by announcing what comes next.

This is a video update:

Well here we are. One year into this crazy quest and me sitting at a bit of a crossroads. I wanted to do a video post today because I really want to be able to communicate fully. Though I keep trying to improve as a writer, there is so much that is lost when non-verbals are removed.This is one time when I want you to be able to see what I’m thinking and feeling, in all of my patchy-bearded glory. There will be an approximate transcript below, if you just can’t stand looking at me. It’s OK, I get that a lot.

In 2010 when LeBron James was announcing the decision of next team he was going to play for, he had an hour long special in primetime. Though I may lack his fame, I can argue that this decision is perhaps just as important. So welcome, dear viewer, to “My Decision.”

I won’t make you wait too long, but I do want to begin with giving my most sincere thanks to all of you who weighed in as I was contemplating this decision. From my blog, to ADVrider to facebook, to random people I’ve met. If I were to add up all of the two cents people have given to me, I might be about one tenth of the way towards affording a campsite in Connecticut…and that’s no small amount.

I’d also like to really single out my parents for their incredible support during this time. There’s perhaps no one else as eager to see me back on American soil…Grandma is surely up there though…but still they’ve been able to discuss this decision with me rationally and understanding of how important this trip is to me. Instead of shouting, “Come home and come home now!” They’ve discussed pros and cons on both options thoughtfully and lovingly. Although I’ve been around them my whole life, they continue to surprise and inspire me.

So let’s just get right to it. Of course this is not a final decision, but this is what I’m thinking at the moment:

As of now, I think it is fairly unlikely that I will be shipping home from the east coast of South America. Additionally, I also think it is unlikely that I will be riding through Central America a second time. Some sort of compromise seems the best at this point. Riding back to Lima or Bogota and shipping from there to the US is probably the most likely scenario at this point.

So…with that said…let me offer a huge disclaimer: That is all subject to change. As I was writing my long pros and cons document a couple of weeks ago, I was unaware that a truckers strike in Brazil was just beginning. This strike ended up stretching to ten days, shutting down airports, leaving cities with shortages of food and medicine and just generally causing lots of chaos. It seems to have been mostly resolved now, but I offer that as an example of just how quickly things can change. I’m still trying to keep every possibility open, knowing that my plans could change very quickly.

So the question of how I came to this decision should probably be answered, especially since the overwhelming consensus was that I should just fly home and be done with this chapter. I don’t know if I can explain fully how I got to this decision. I thought about it, I prayed about it, I considered all of the advice that was given to me.

Then, ultimately, I asked myself: What do you want to do?

…and right now what I want to do is hop on that dirty old bike and ride across the rain forest. So that’s what I’m going to do. Part of me feels like I should maybe apologize for neglecting the advice of so many, but this trip is my baby and I’m going to raise it the best way I know how.

As many of you noted, visiting Salvador, Brazil will be the last song place in Latin America, so why linger any longer? I think I’ve been fairly transparent from the start that this trip is not just about crossing 92 places off of the ridiculous sign on my ridiculous trunk.

Though that is my quest, it is not my purpose.

From the beginning, I knew that it would be a mistake to focus too rigidly on going from song place to song place as quickly as possible. Being open to other adventures and other experiences is what has made this adventure so wonderful. I do not feel that now is the time to abandon this philosophy. I am in a unique situation to experience a part of the world that I may never get a chance to experience again and I don’t feel like passing that up.

Let’s talk about what this means functionally.  From where I sit here in Cordoba, I have around 5,000 miles left to complete the song places. My route will be roughly: Down to Buenos Aires, over to La Paloma in Uruguay, back to the NE corner of Argentina for Eldorado, visit Foz de Iguacu, east through Sao Paolo and Rio, up to Diamantina, then north to Salvador.

From Salvador it will be about 5,000 more miles if I ride all the way back to Bogota, which seems like a favorable shipping destination. I don’t think this is too significant, especially since if I wanted ship from the east coast somewhere (like Sao Paolo or BA), I’d have 1 or 2 thousand more miles to get back there. Riding back through South America is definitely some added mileage, but it is maybe not as significant as it would first appear.

As far as Central America goes, the situation in Nicaragua continues to get worse. At this point, I don’t think it would be wise to ride through there again. Unless things improve significantly over the next month, I will not be going through Central America again.

So that’s what I’m currently thinking. I hope you all are not too disappointed in me.

As I mentioned in the title, today is actually a very special day. Today, d-day, is the one year anniversary of our 8-10 month trip. In some ways that day of departure feels like yesterday, in other ways it seems like it was a lifetime ago. To those of you who have been with me from the beginning, I’d like to say with all the sincerity that I can muster: Get a life. This story is not that good.

Seriously though, all the support has meant the world to me. I hope I make that clear in my day to day writings.

As I’ve contemplated this anniversary, I played a little game with myself: “If you could go back one year and tell yourself two words, what would those two words be?”

I thought of some good possibilities: “Sixteen months” would let me know that I had grossly underestimated the time contraints of this journey.

“Fuel Ombabika” could have let me know to take a reserve with me, possibly allowing me to find the Ombabika cemetary.

“Less bubblebath” might have kept me from almost drowning in Sarasota.

“Skip Palenque” would have kept me off of the fateful road where I had my accident.

“Fly Darien” would have dissuaded me from putting Annie in a container to reach Colombia.

All good options. If you have other possibilities, I’d be interested to hear them

But ultimately, I think if I could tell myself two words on that departure day one year ago, I’d just look myself in the eye, smile, and say “buckle up.” I don’t know if I would really change anything that has transpired so far.

As usual, I’ve gotten a little long winded here. I’ll close by saying once again how grateful I am for all of you who have been a support throughout this journey. It really means the world to me. So, Annie, get ready to roll. Sonic, lace up those sneakers, because Everywhere is calling and somebody’s gotta answer the phone.

Stay buckled up, everybody.

Realtime update: Still in Cordoba. One more night here, then it is off to Buenos Aires.

My thoughts and prayers are with the people of Guatemala who have been devastated by the volcano. I went back and checked, finding out that it was the exact same one, Volcan de Fuego, that erupted while I was in Antigua. (That Blog post) 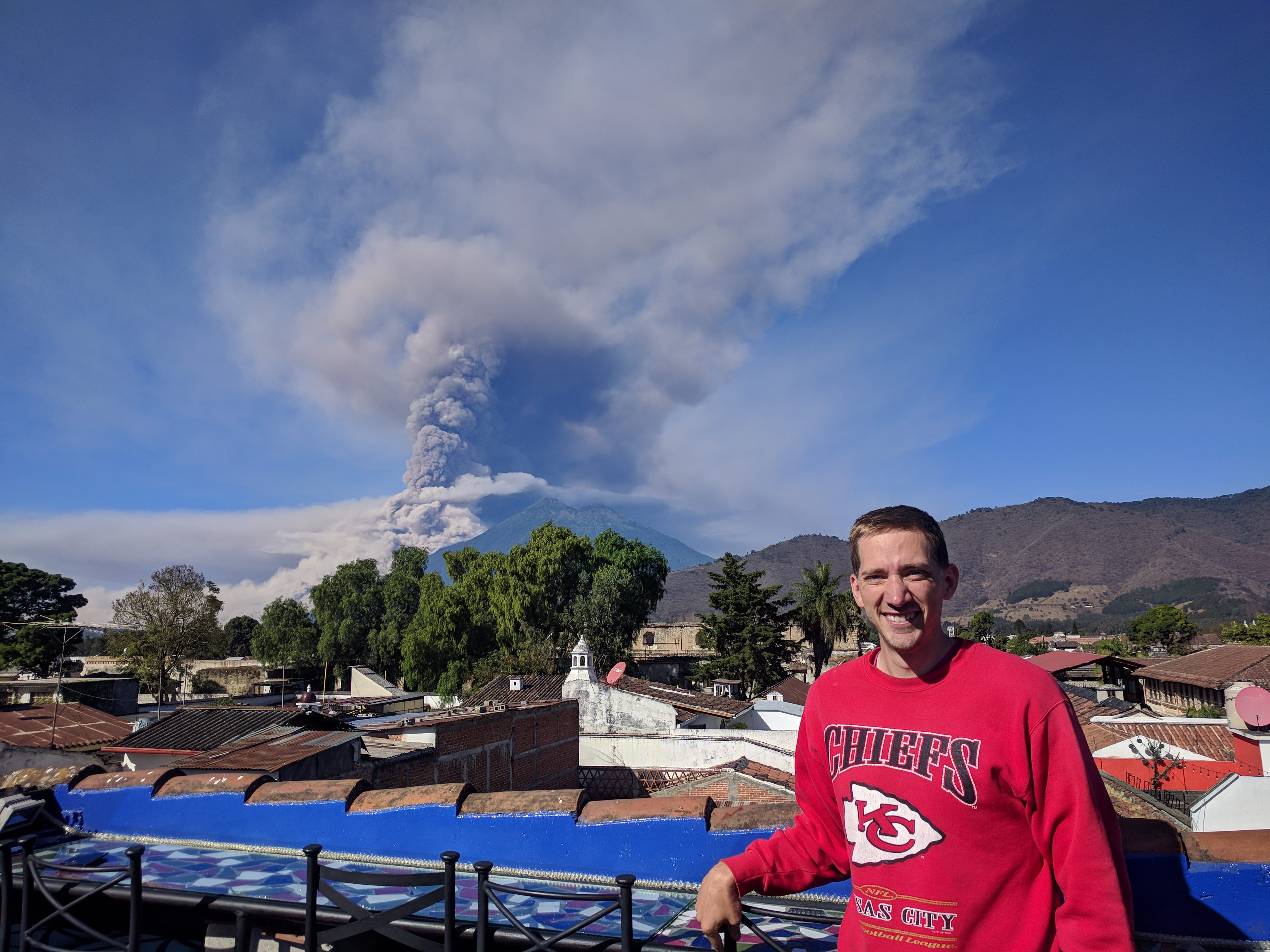 Everyone was just taking pictures and acting like it was no big deal then. I guess you just never know what’s going to happen with an active volcano. 😦

21 thoughts on “Anniversary and Announcement”