We conclude our wonderful visit to Colorado, letting the fragrant wildflowers bring us to many halts. We meet a motorcycling legend, sample some fine roadkill and ride the Million Dollar Highway…for free! We continue in our quest to capture the perfect picture to define “Colorado,” finding a number of possibilities.

Annie received some pampering while I was staying with my hosts Dave and Beverly in Denver. Using their home as a shipping receiving center allowed me order just what I wanted. It felt like a real accomplishment to be completing some of the final maintenance procedures of the trip. The final valve adjustment: 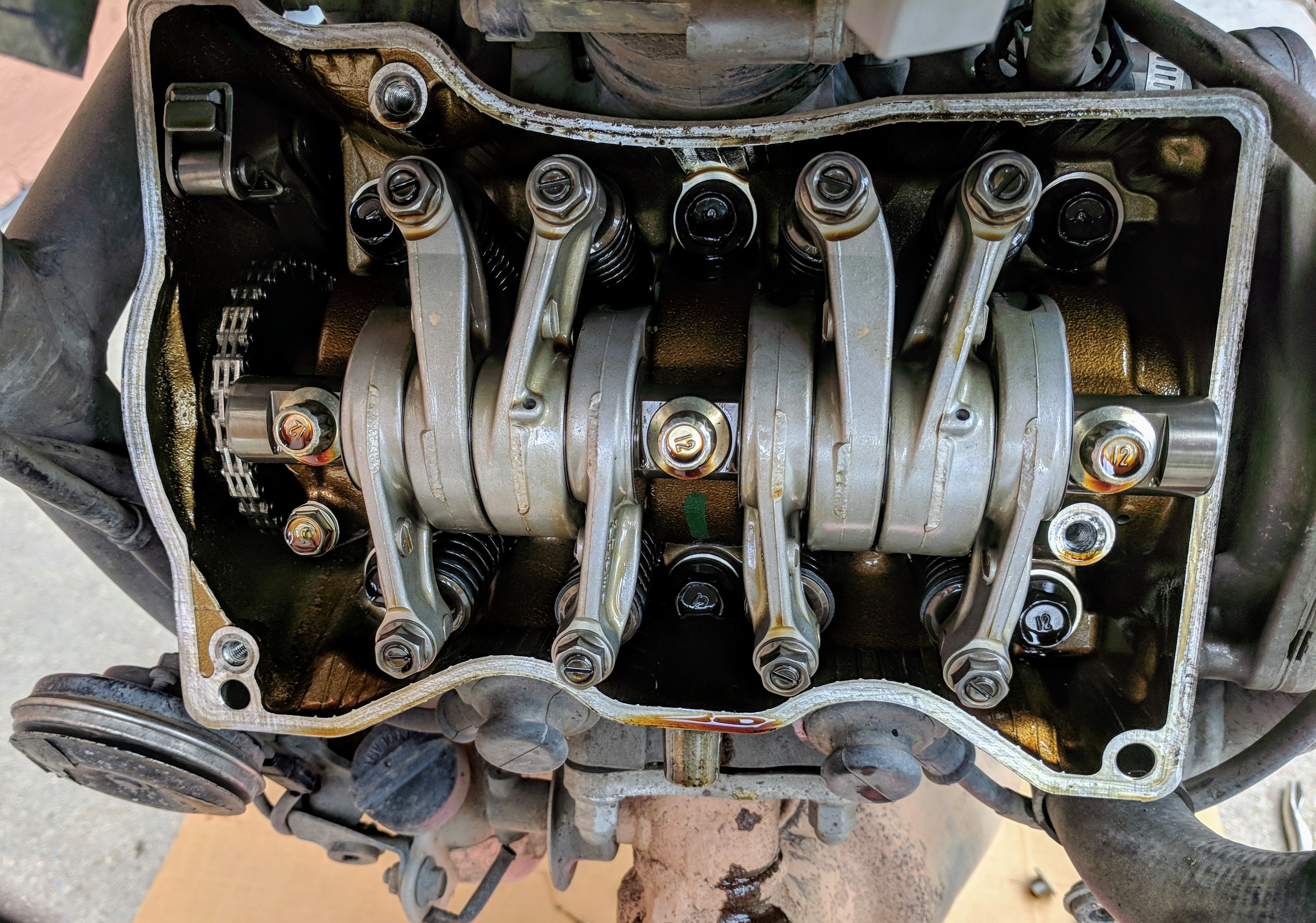 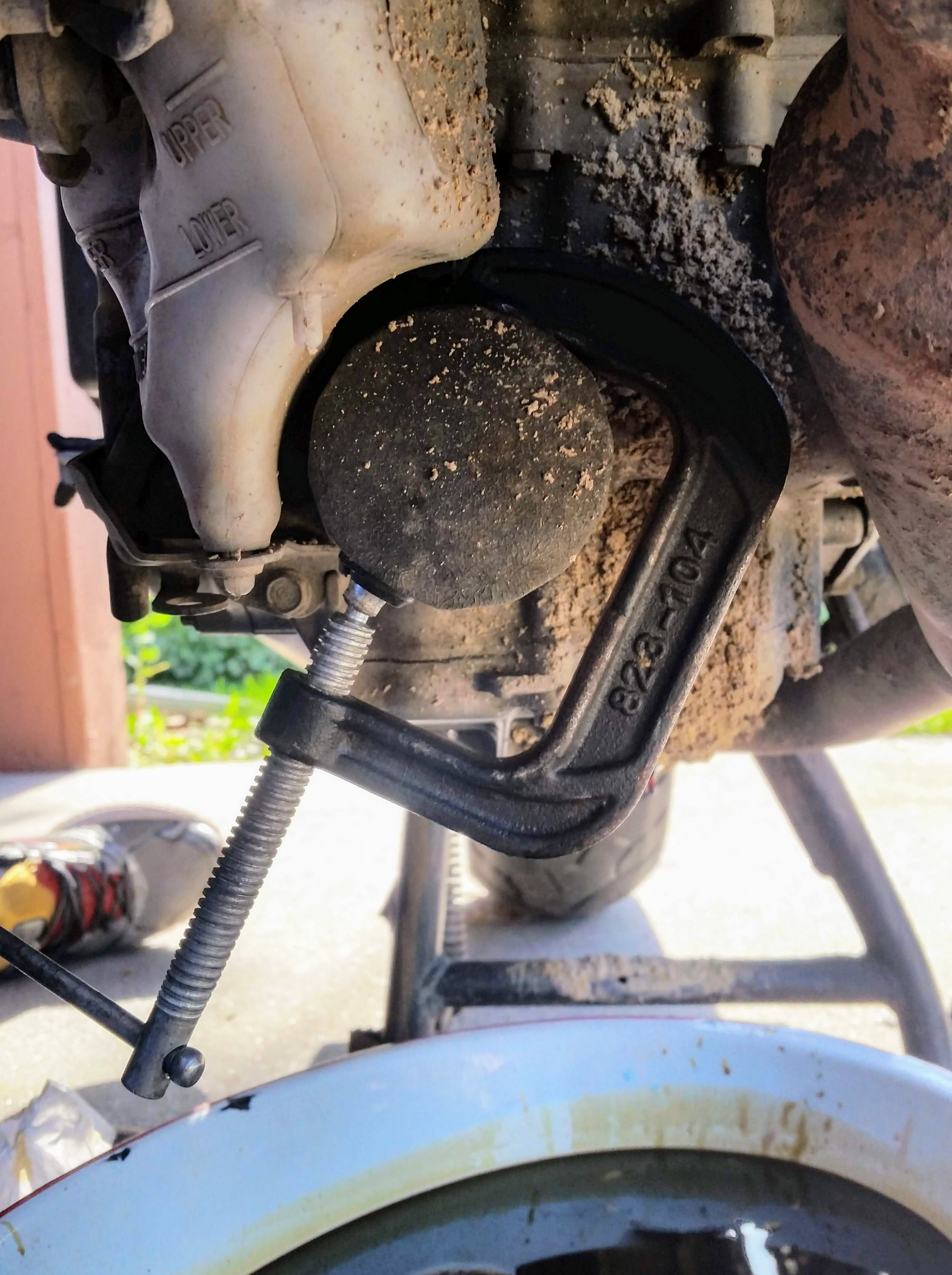 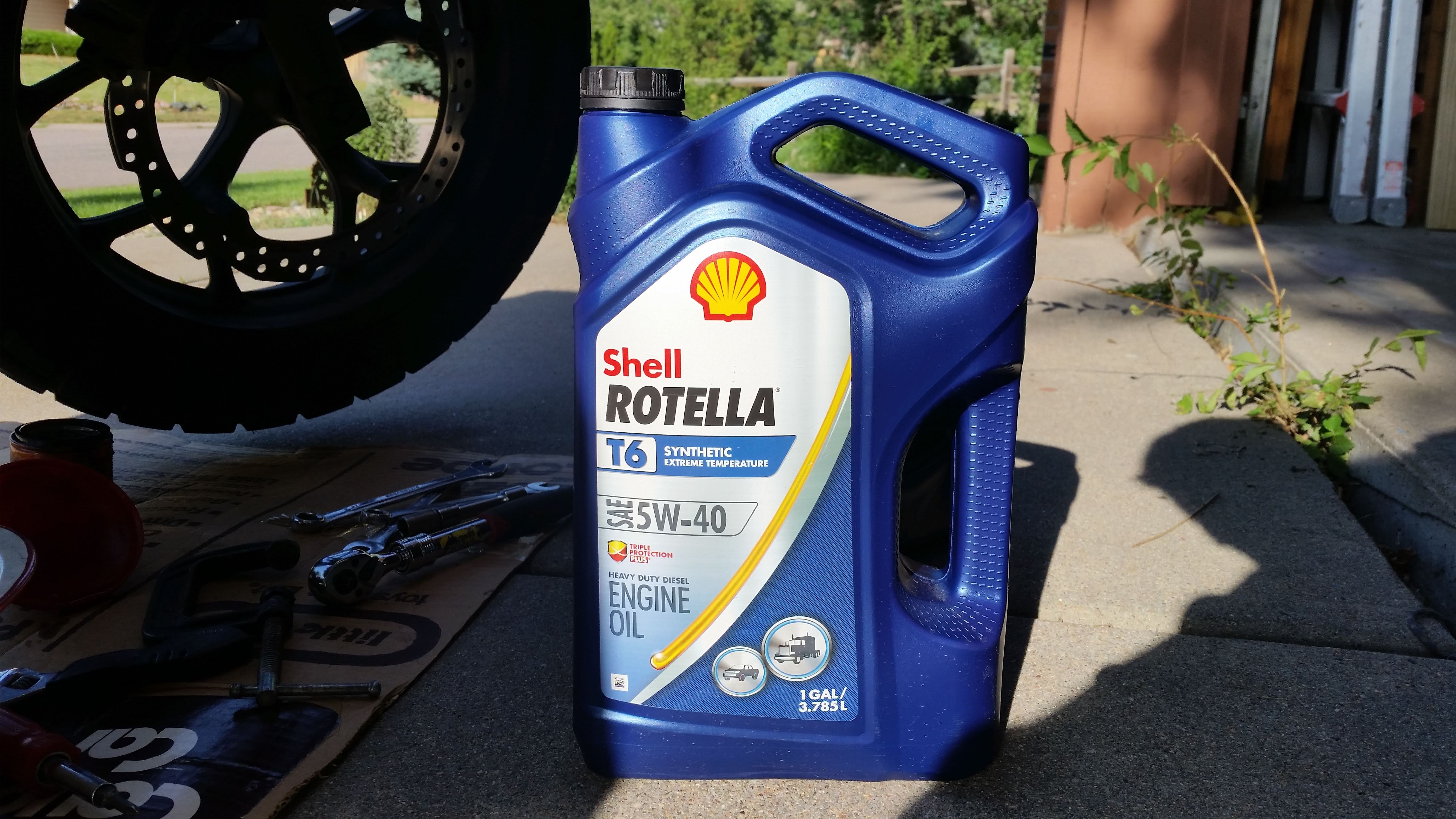 While at our cabin in Fairplay, I also performed the final maintenance procedure that my body should need on the trip. 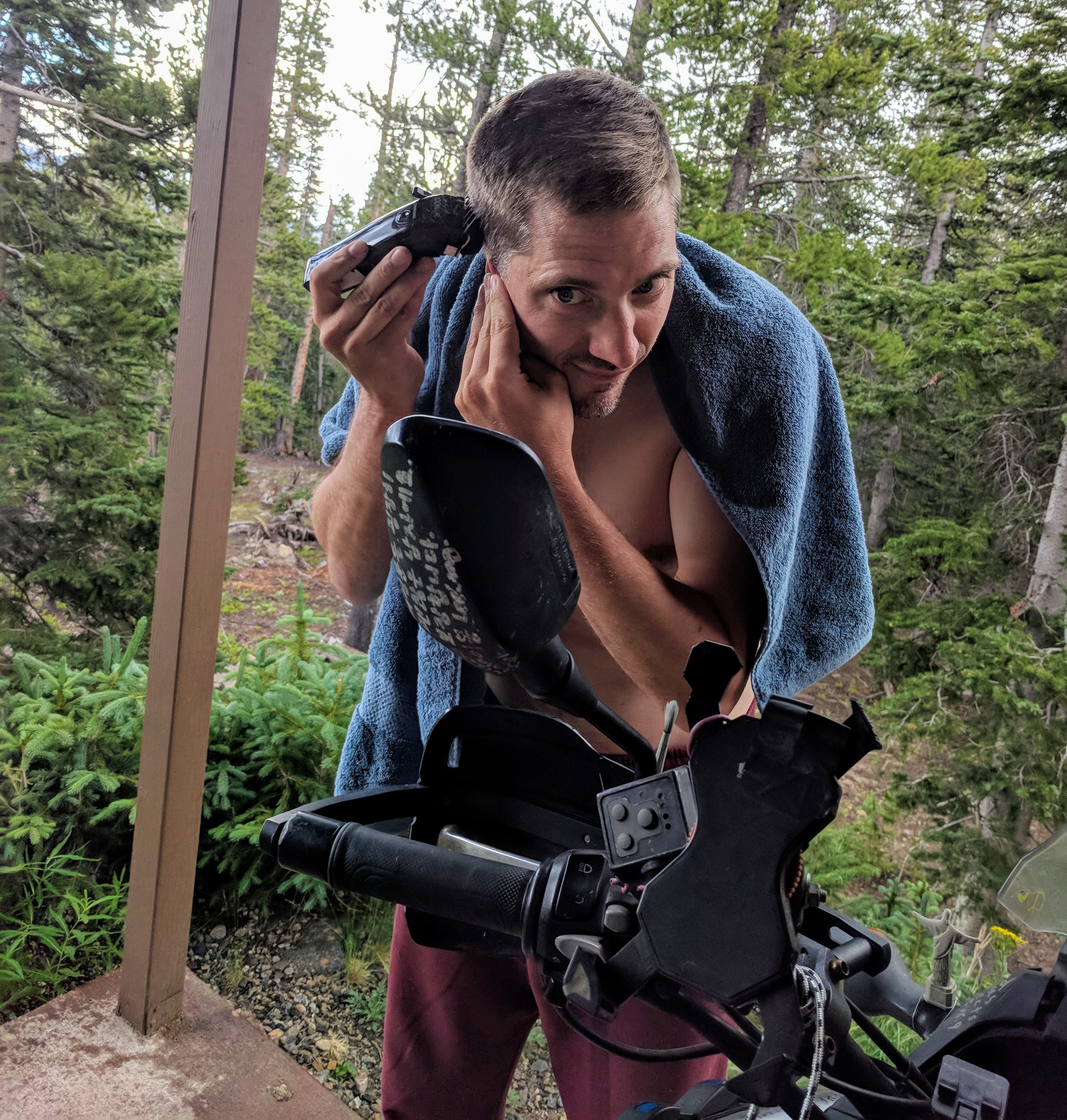 There will still be a few more things to do with Annie, (one more rear tire, probably some brake pads, maybe rear bearings) but she’s nearly in her finish line form.

This was my final full day in Denver and it would prove to be a very enjoyable one. My friend, Dave from Estes Park, told me that there was an ADV Rider meetup downtown. I’m always encouraging Annie to be more social with other bikes, so it seemed like a good event to attend.

One of the sponsors of the event was Mosko Moto, a company that makes motorcycle luggage and accessories. They gave a presentation about “fly-in” motorcycle trips, where buying or renting is the method of acquiring a bike rather than riding it across a zillion borders. It is definitely a great option. 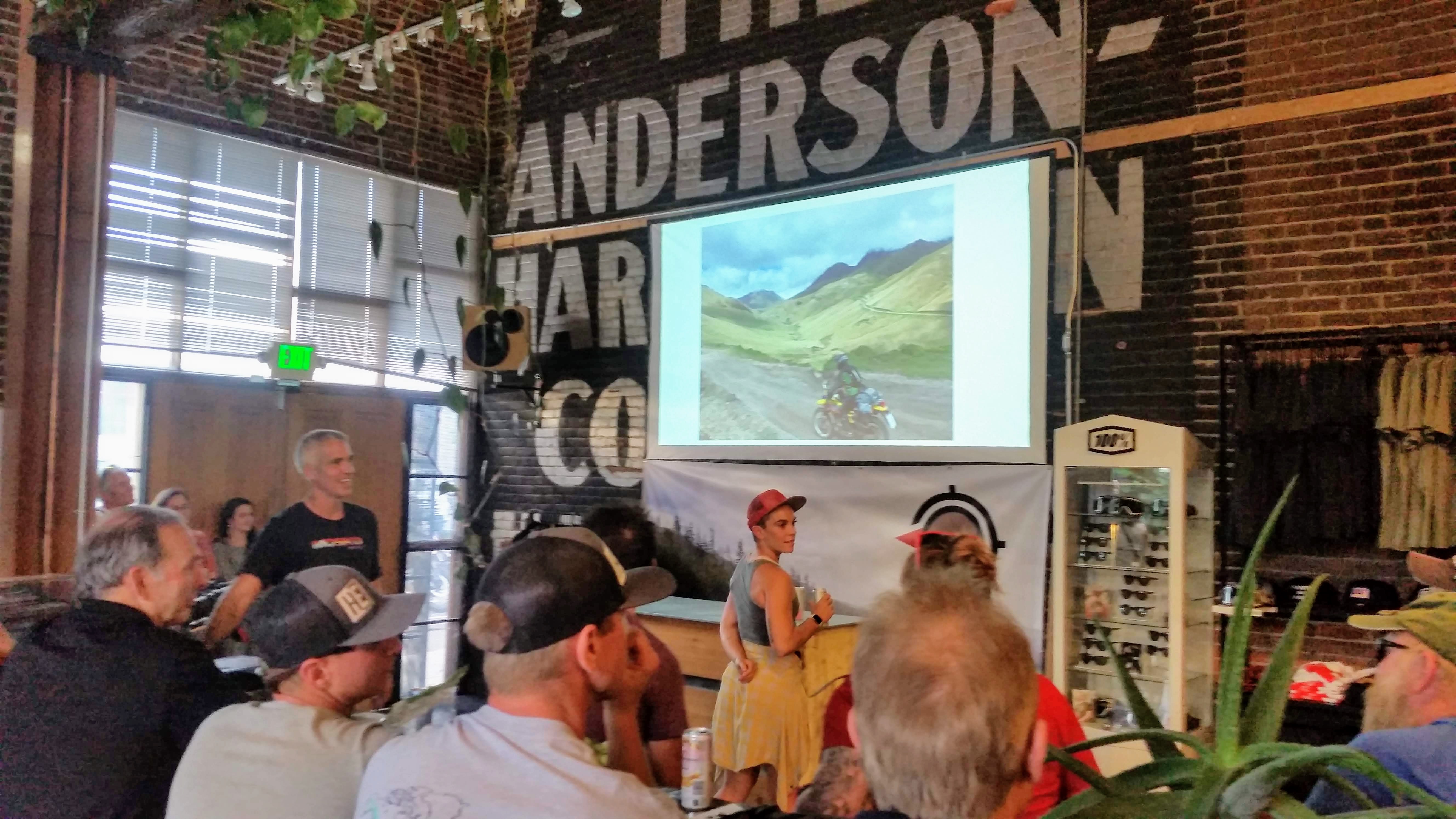 During the introductions, they mentioned that RTW Paul was there. (RTW standing for “Round the World”. I never asked him his full name, so this allows me to theorize that it is actually Robert Thomas William Paul. Until he is willing to present his birth certificate to negate this claim, I am going to assume this is truly his name.) This guy is an absolute legend and makes my brief travels look like a ride around the block. He had been in Alaska just five days earlier and rode down for the event.

We had been in touch previously, as we were both in South America last year. We also exchanged some messages earlier during this chapter when we were both in south-central US. Unfortunately, those potential meetings never came to pass.

But here we were at the same gathering in Denver, without even trying to meet up. Yep, it qualifies:

Dave arrived during the presentation and was very thoughtful to introduce me to a lot of people. It’s not really in my personality to walk up to strangers and declare, “Hey, I’m going Everywhere, man!” so I really appreciated having him there. Through him I met lots of really nice people, including his riding partners who were eagerly anticipating a ride up to Glacier NP.

It was great to get Paul’s signature on Annie. 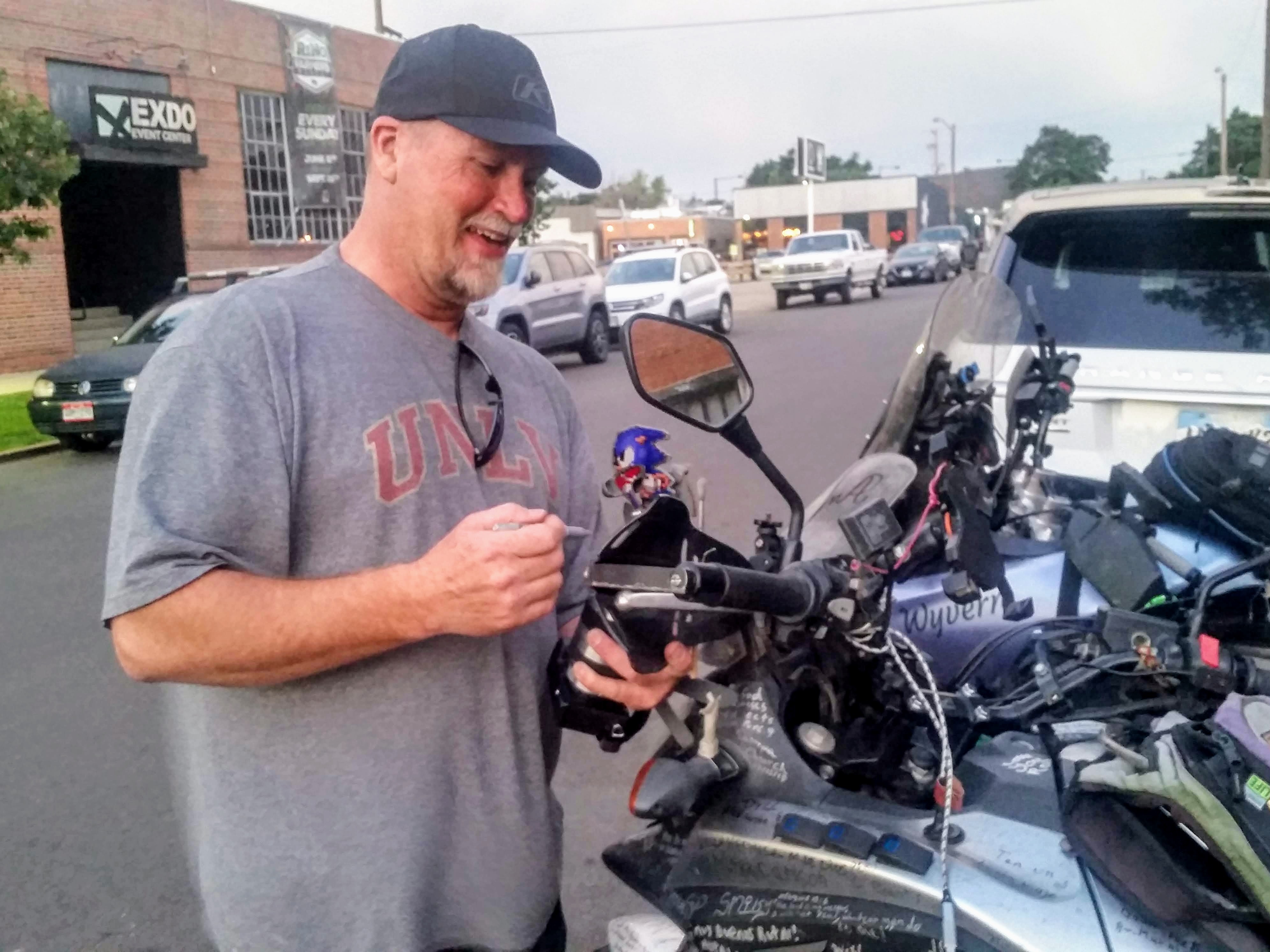 Paul is an incredible photographer, of the sort that are able to tell a full story with a single snap. I would highly recommend checking out his website, even though doing so might help you realize that my photos are not that good. THIS POST on his website is his final one on his time in South America last year and has some stunning images. 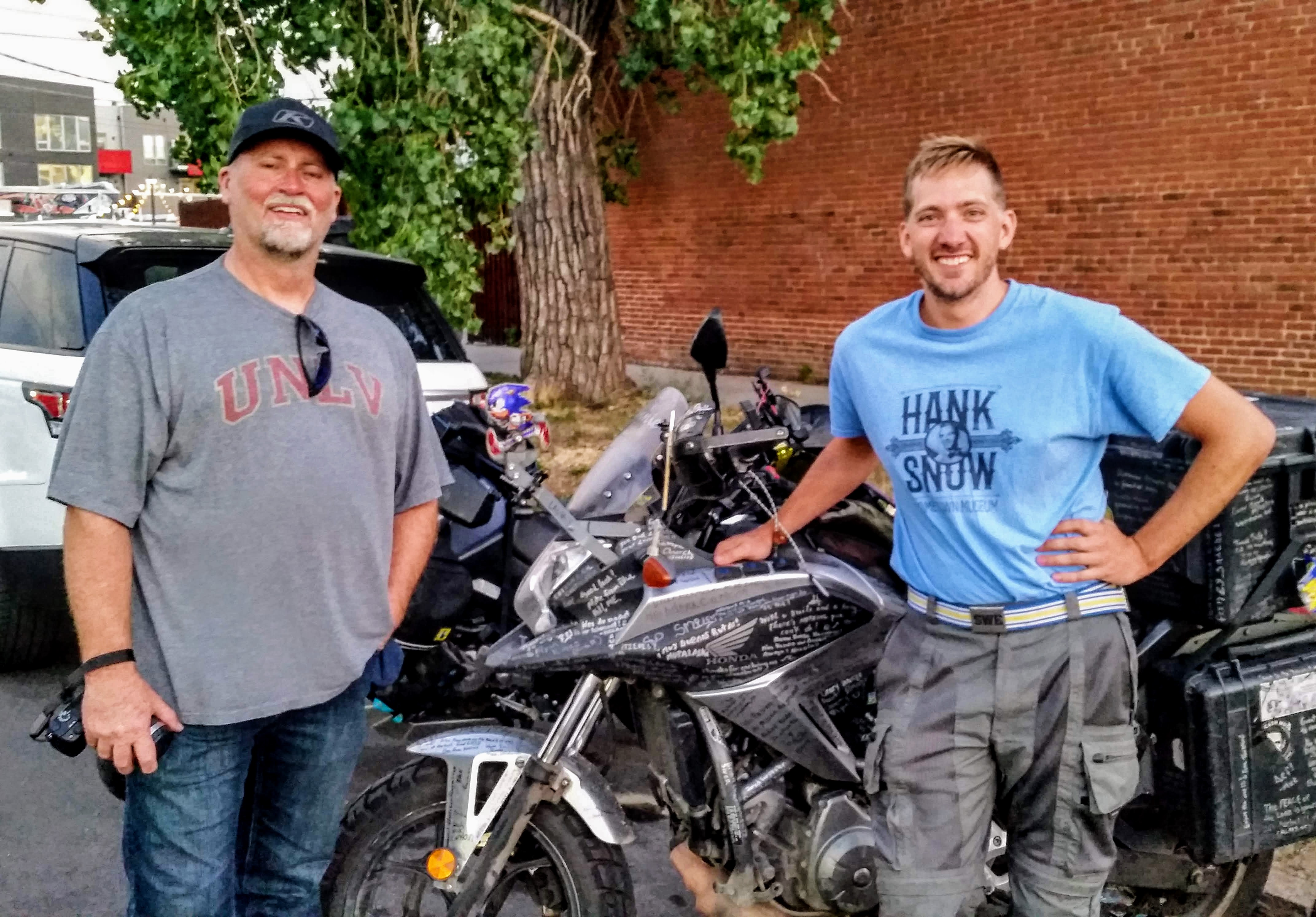 It was an honor to meet him!

I really enjoyed my time with Dave. He’s definitely someone whom I would like to get to know better. I hope that the next time I ride through Rocky Mountain National Park, I will be able to use his home as the jumping off point. I had neglected to have anyone cross off Grand Lake from my sign, so I asked Dave if he would correct this oversight. 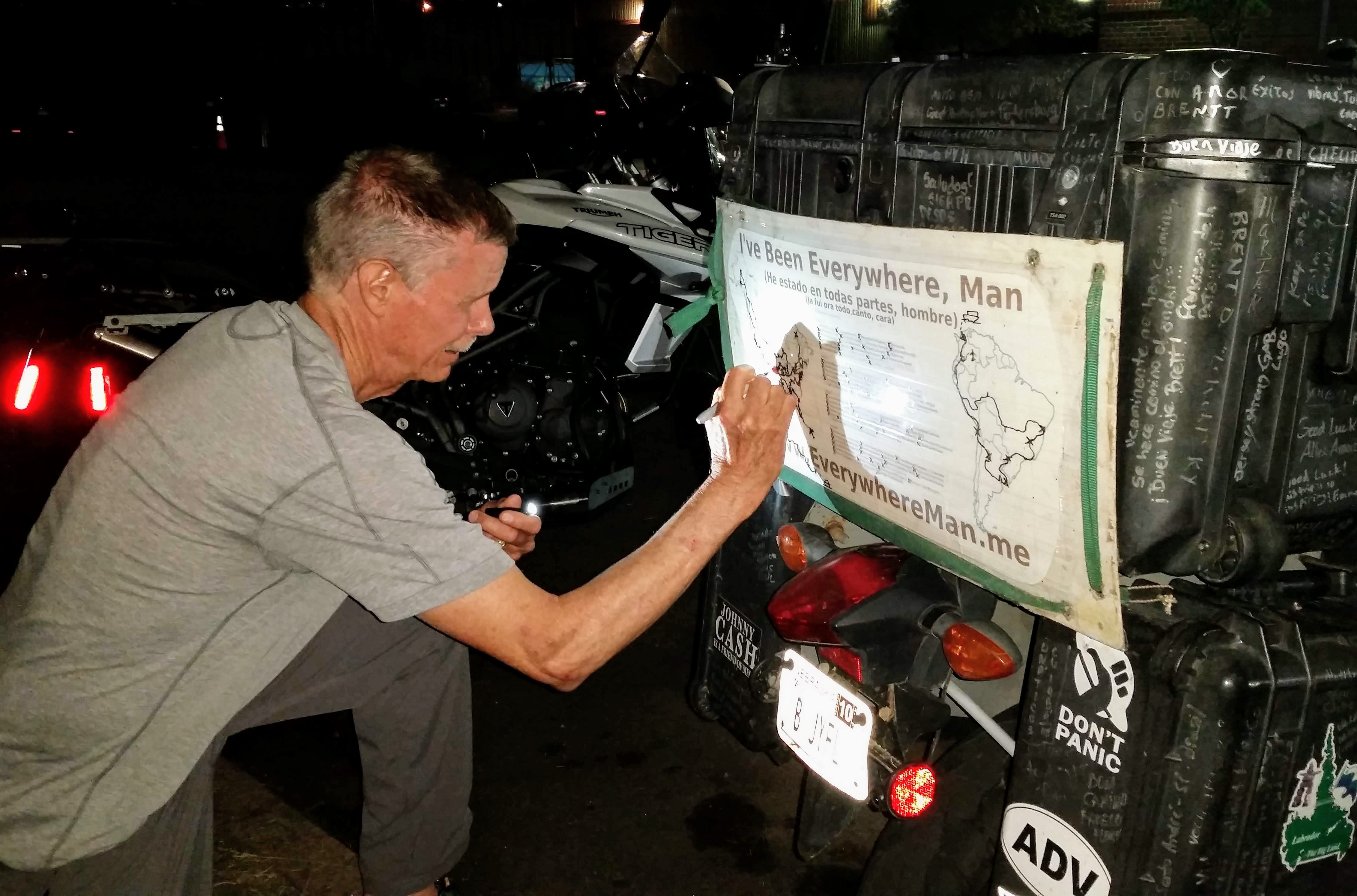 Back on the road!

The goal for the day was to make a little westward progress, while staying on the lookout for an iconic “Colorado” image.

It was bittersweet to say goodbye to my wonderful hosts in Centennial: Sad to leave their presence, but glad that I had had the chance to get to know them so much better. Thank you for your amazing hospitality! 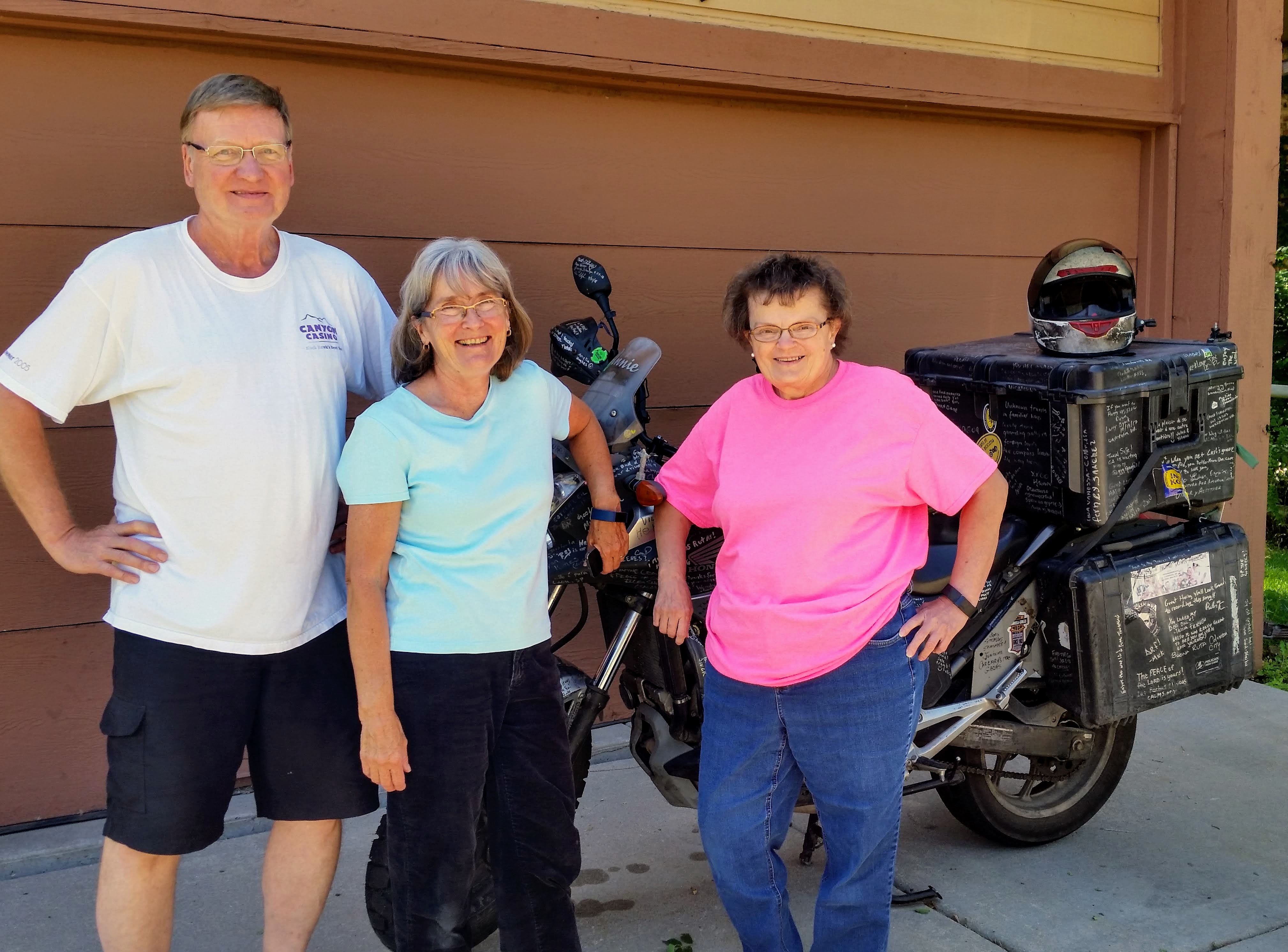 Normally I’d say that it is somewhat of a venial sin to ride on the interstate during a motorcycle trip. However, I believe I-70 through the Rockies is an exception to this. It is an engineering marvel, full of great views, ample curves and claustrophobia-inducing tunnels.

I left the freeway and headed towards Leadville. I was needing a break, so I rode towards the towering range in the distance looking for photo ops. A dilapidated cabin provided some nice foreground contrast. 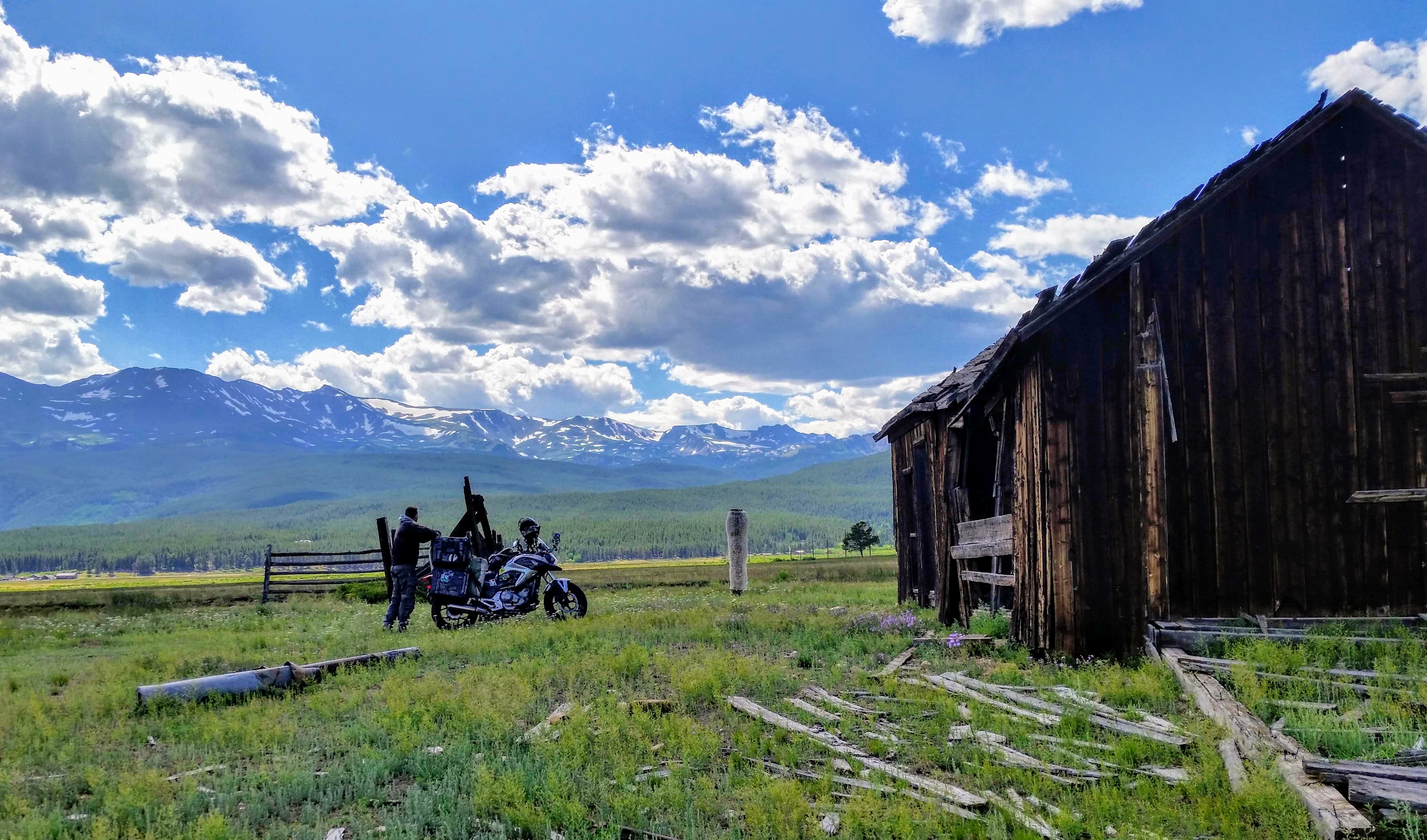 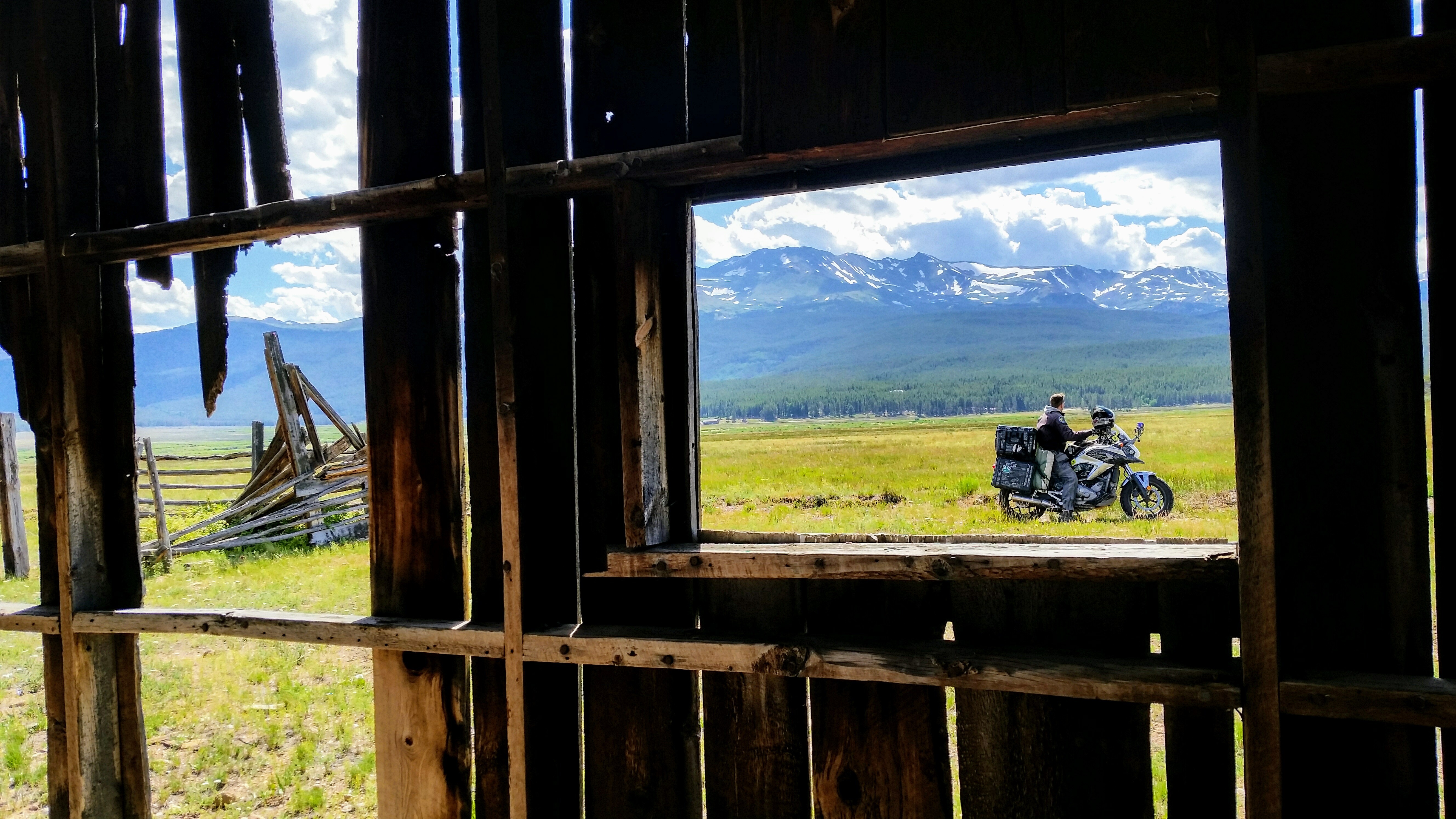 I believe that is Mt. Massive pictured above. I’m sure some Coloradan will correct me if I am wrong.

I also spent some time hunting for a good view of Mt. Elbert, the tallest peak in Colorado. It was a good excuse to explore some of the interesting back roads.

The light was all wrong, so this was a good as I could do for Mt. Elbert: 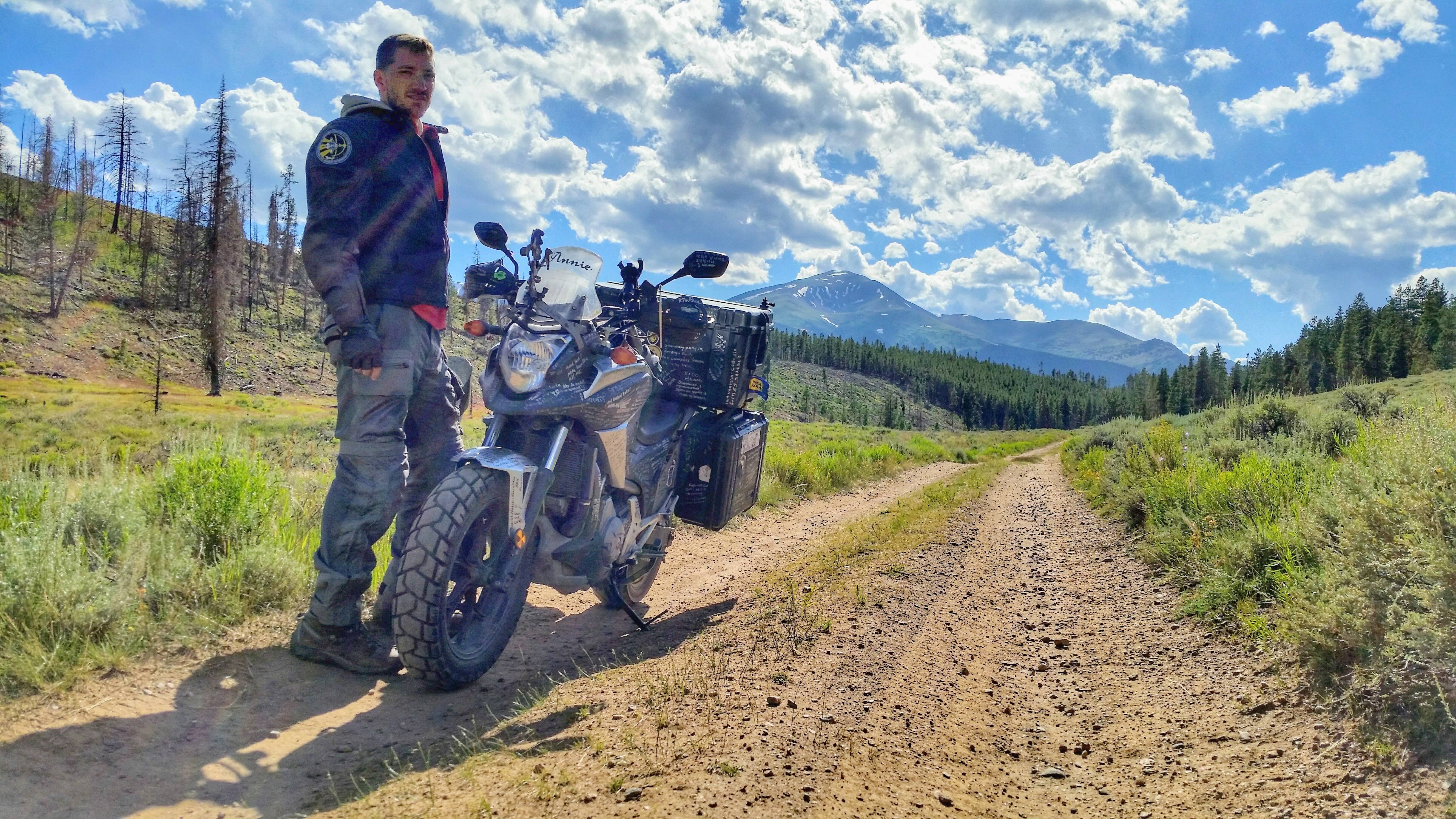 I found a home on some BLM land near Poncha Springs. Wild camping is allowed in these areas, so I didn’t even need my stealthy skills. I even felt comfortable getting a fire going. 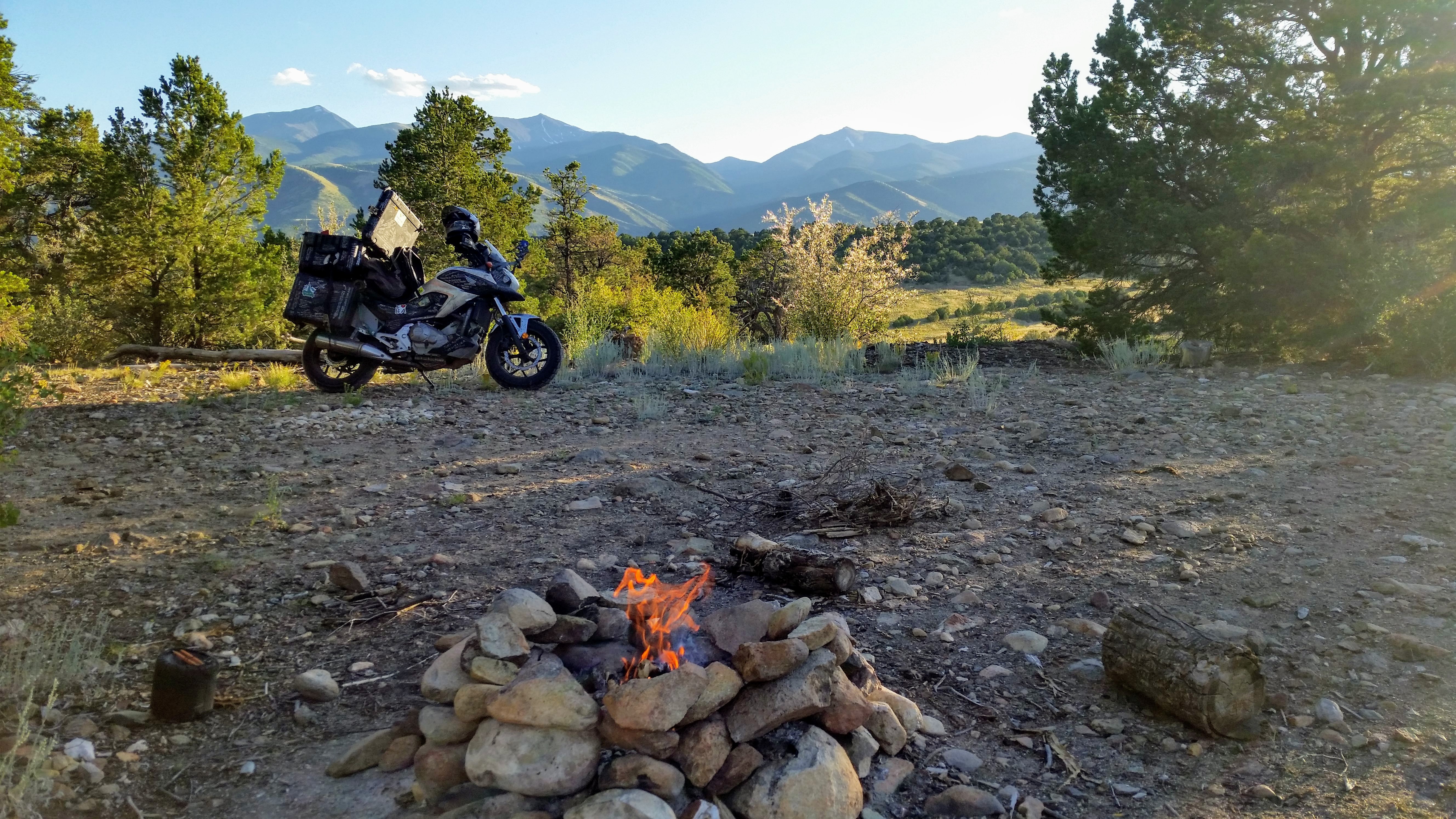 Everything tastes better over the fire, even ramen. The sauce that my friend, Triesch in Lousiana, gifted me helps too. 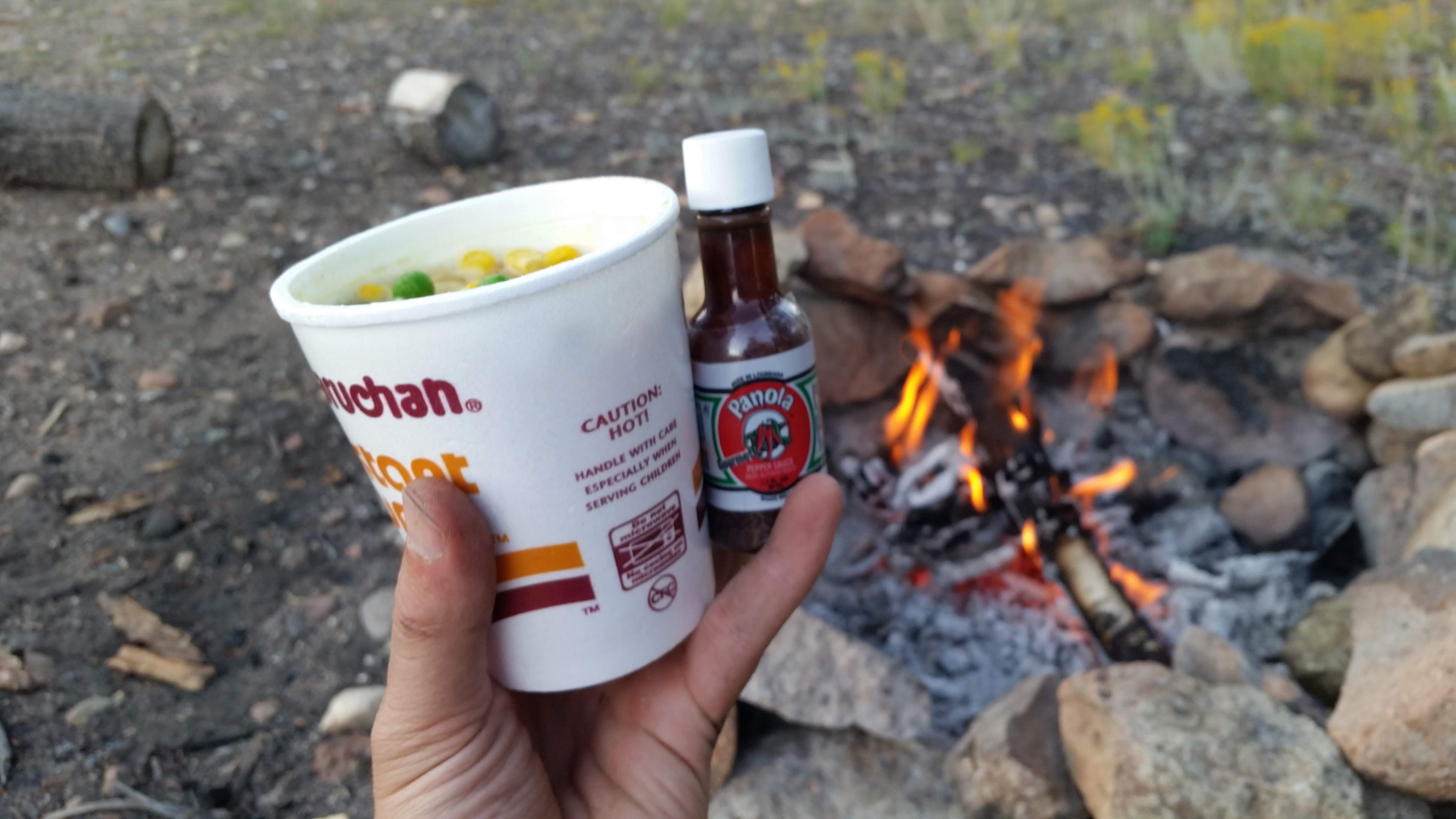 I didn’t sleep the best upon my return to my maroon cocoon, but at least it was a peaceful night in a serene location. 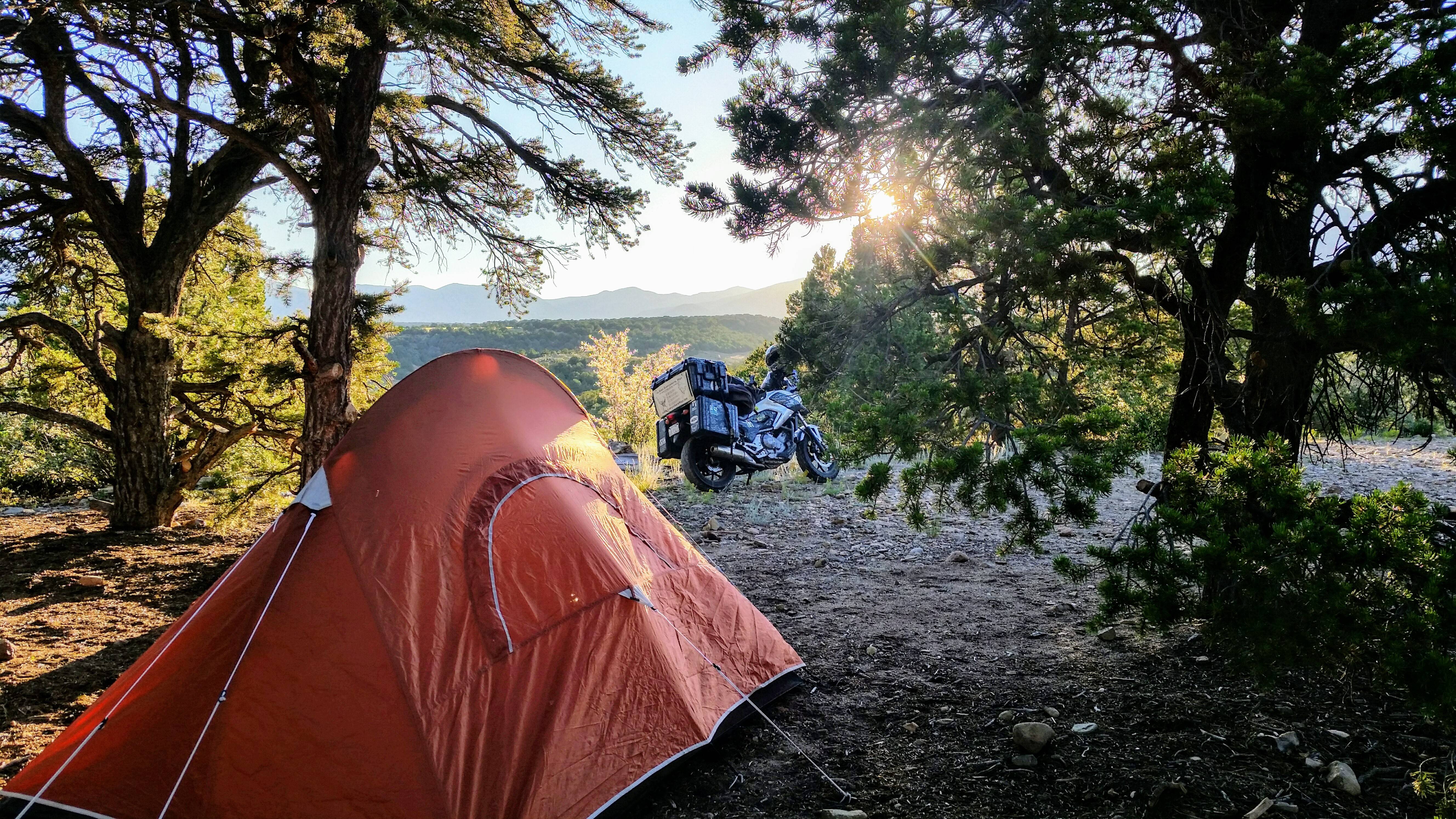 I didn’t have much food along, but I ate a road-killed coyote down to the bone. I must have been hungry! 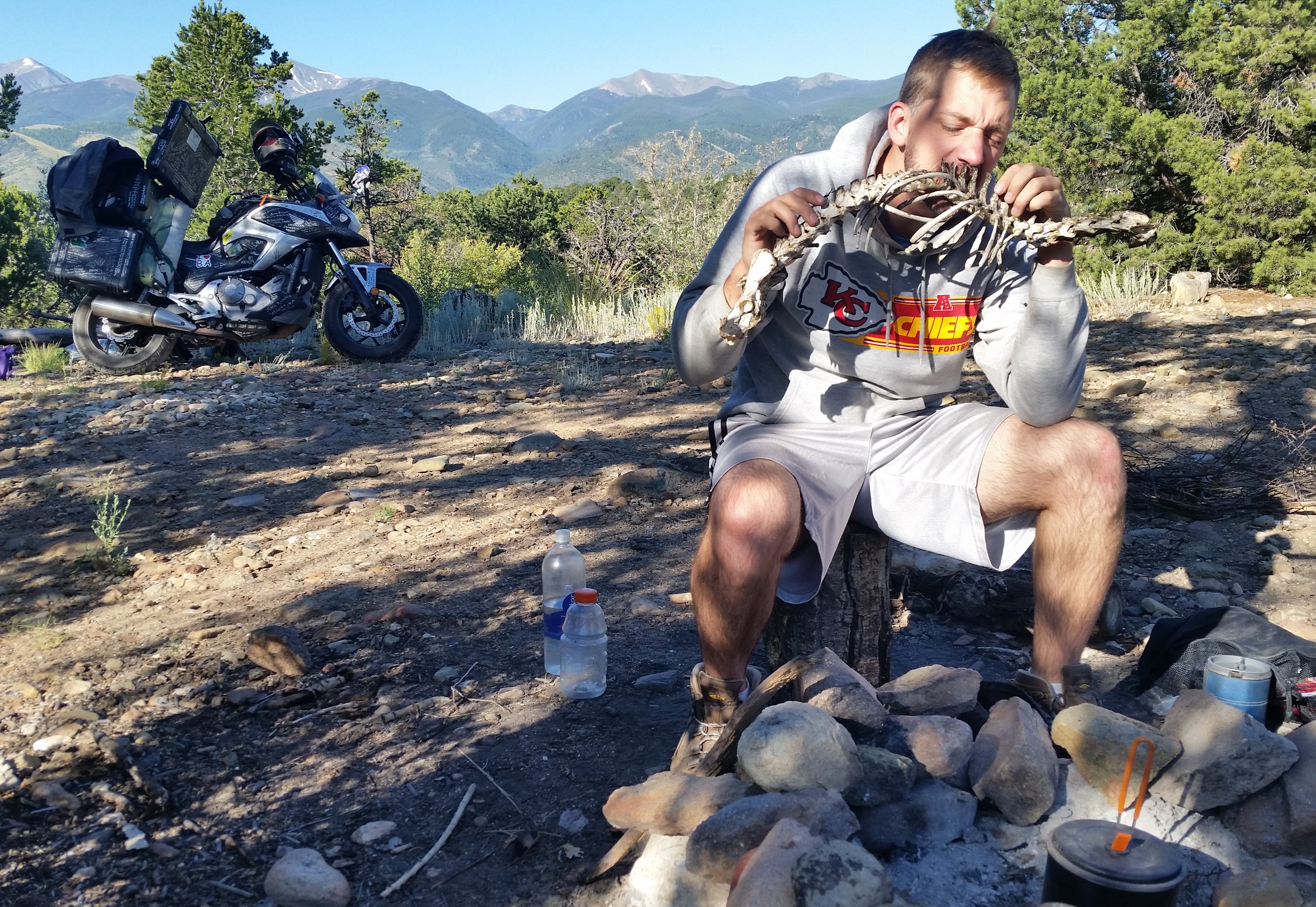 Seriously though, I have no idea what kind of skeleton that was…

My ride west was wonderful, save for one incident. I had a wasp fly into my collar, stinging my neck about four times while I was leaning through a curve. 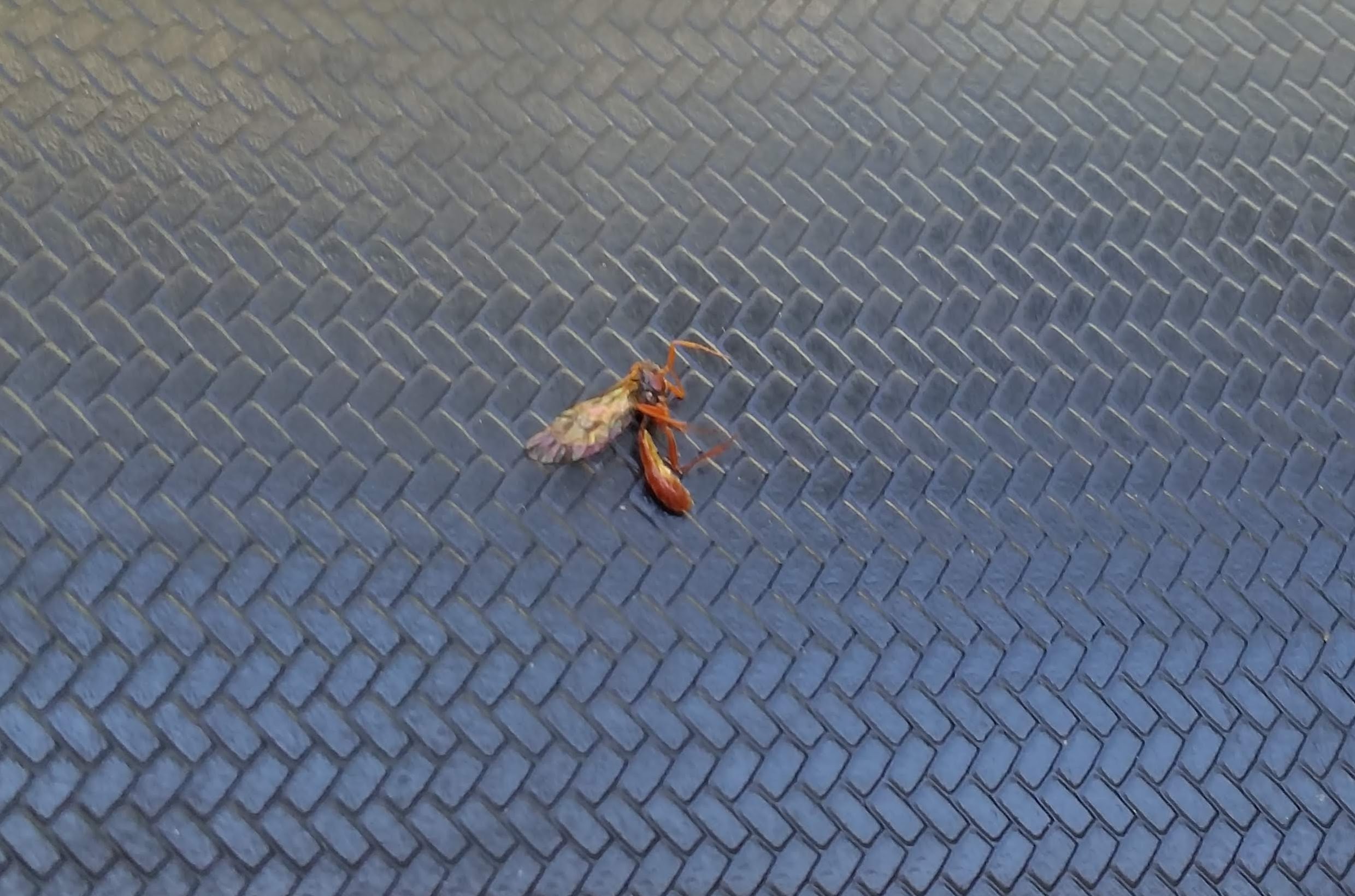 This can actually be rather perilous on a motorcycle, as you have to fight your natural urge to grasp at the point of pain and try to maintain focus. All you can really do is shout through your repertoire of profanity until there is a safe place to pull over. This is problematic for me, since once I’ve used up “fiddlesticks!,” “egads!” and “balderdash!” I find myself lacking further expletives. It is a definite chink in my vocabularic armor. 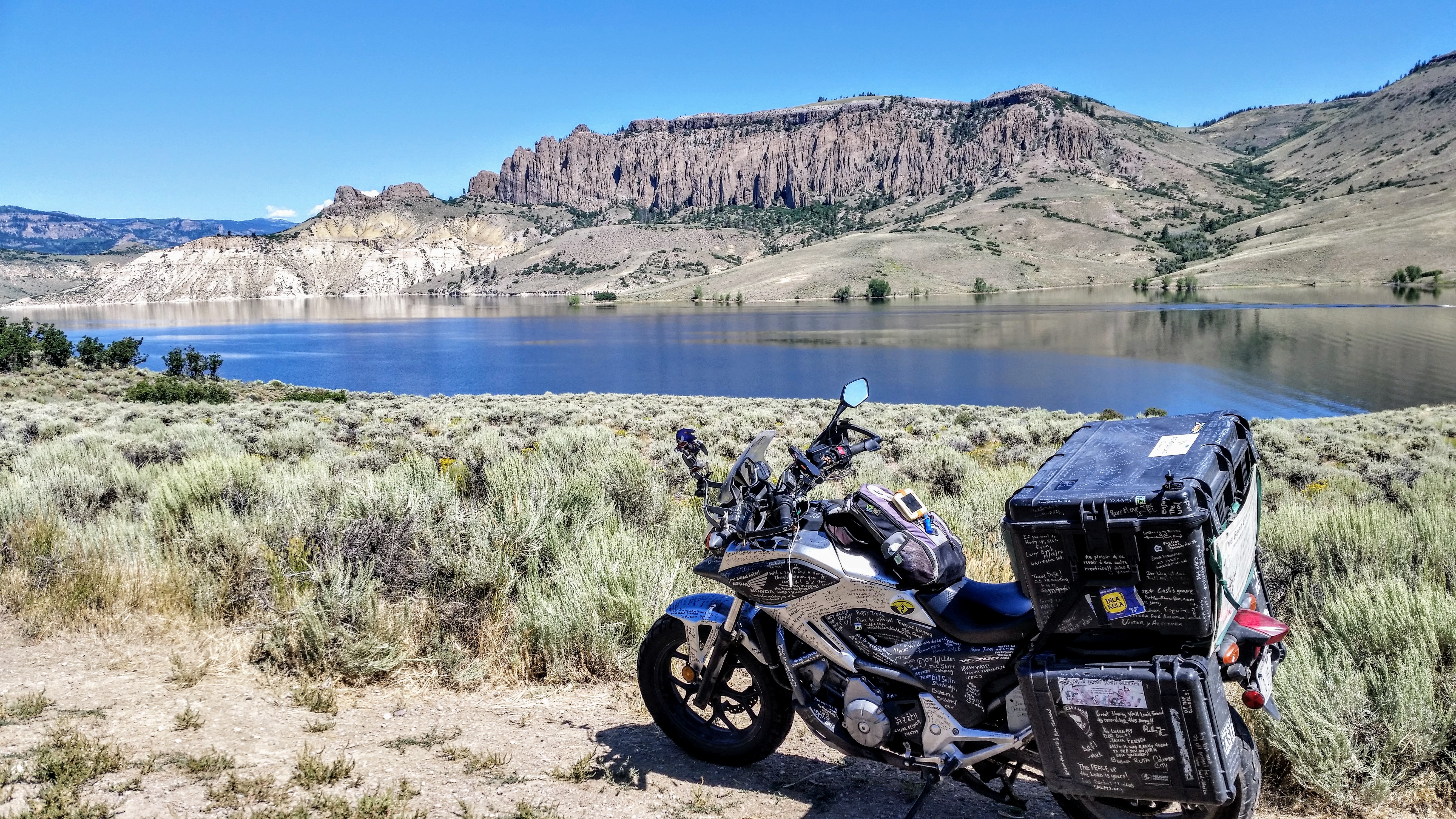 I stopped at Black Canyon of the Gunnison National Park, where I somehow became an instant celebrity. A stop to put on some sunscreen somehow transformed into a half hour presentation to a host of friendly folks. I always find it funny how these things happen. Once one person starts taking pictures and asking questions, others feel more comfortable to do the same. Even when I am in a hurry, I always really enjoy these interactions.

The canyon is beautiful and impossible to photograph. 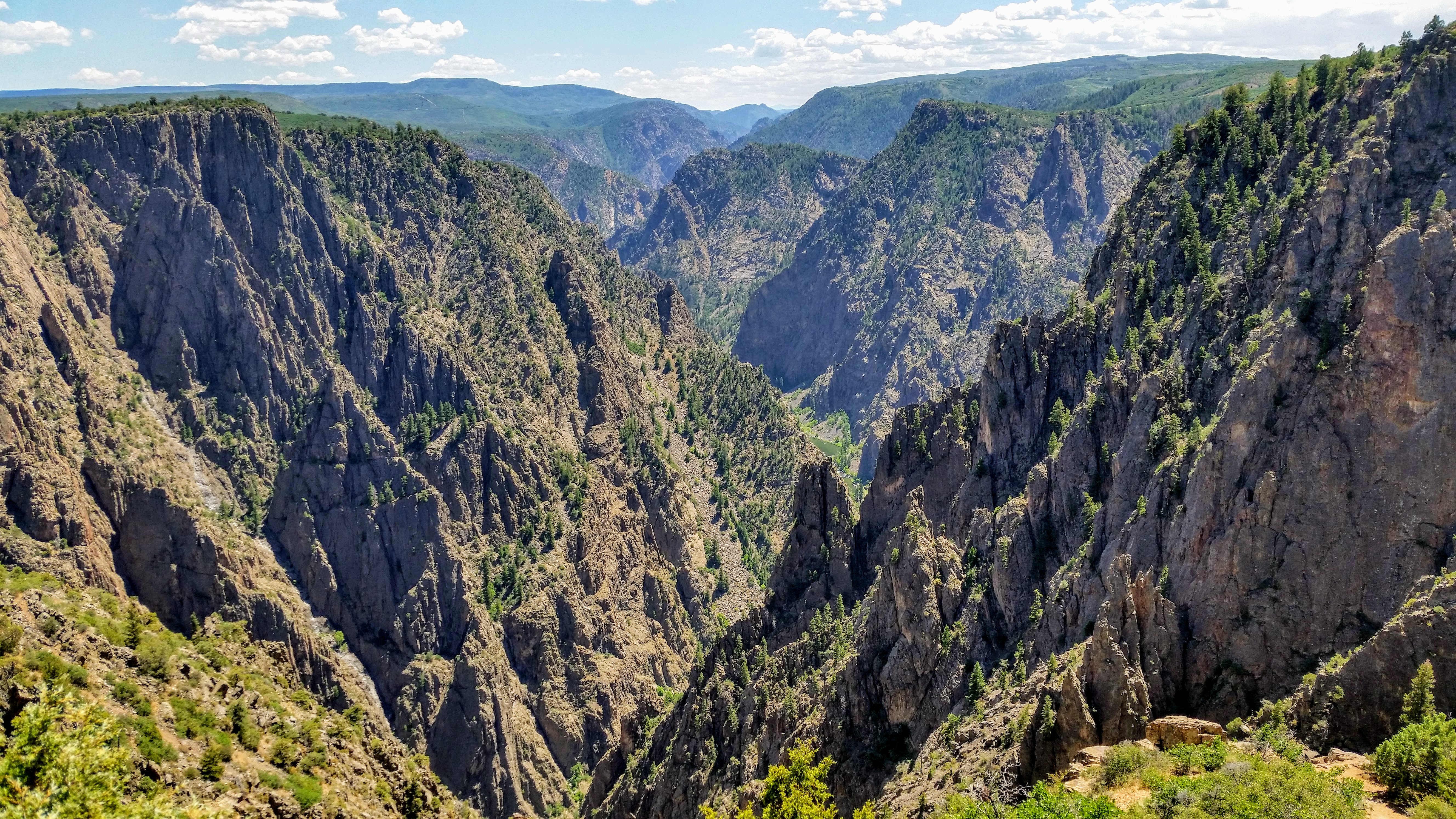 I met one guy from Texas who seemed excited to meet me. He thought I was the guy who had made the video of visiting all the places in the Texas version of “I’ve Been Everywhere.” (I shared the video in THIS POST.) He almost seemed a little disappointed that I was doing the Americas version instead. 🙂 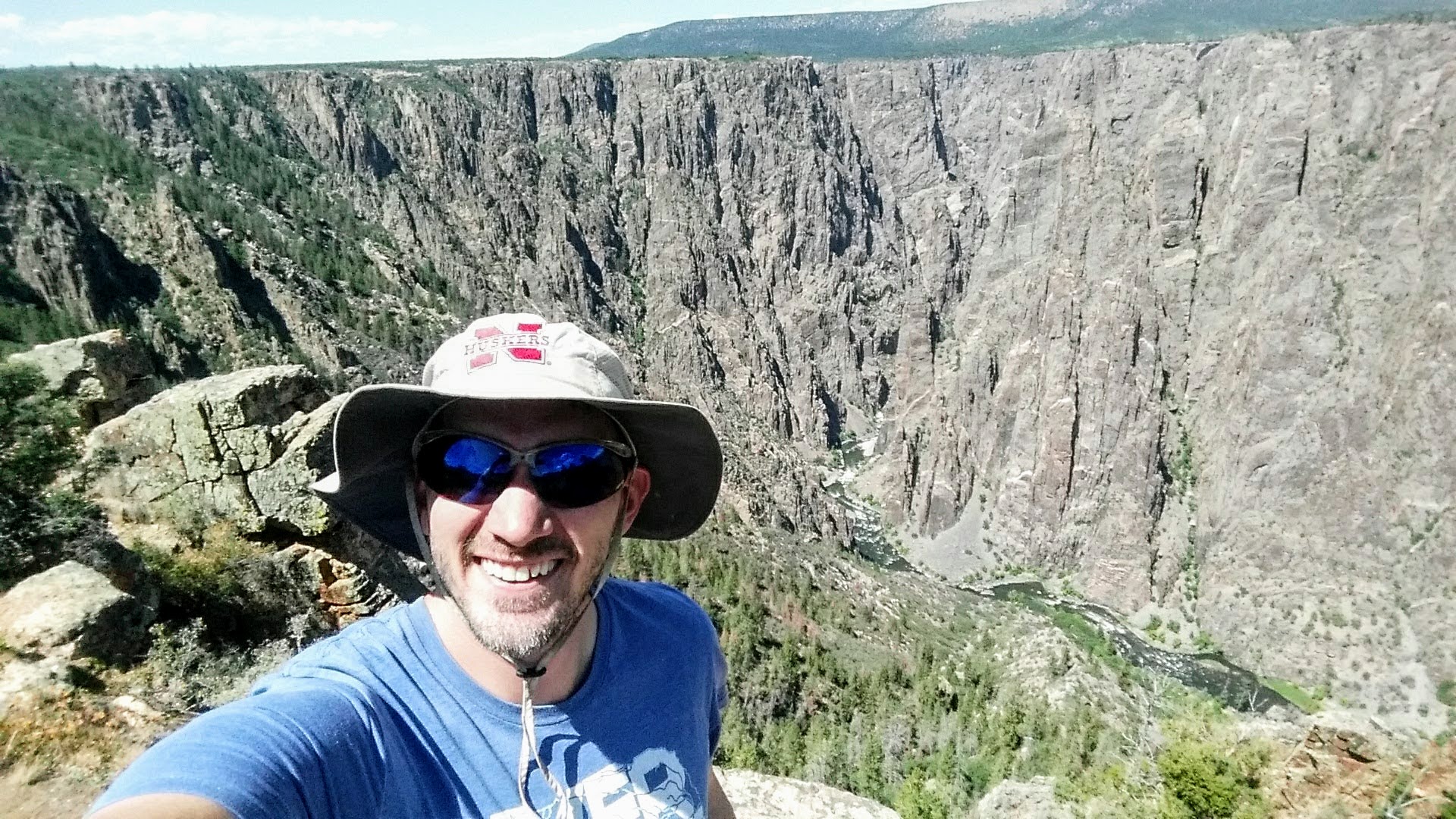 I turned south onto highway 550, also known as the “Million Dollar Highway.” I was initially hesitant to ride this stretch as I didn’t think I could afford the toll. Much to my delight, I learned that “million dollar” refers to the cost of construction instead.

(Apologies for the smudge in the next few clips)

I passed through the town of Ouray, which nestles neatly between the mountains. 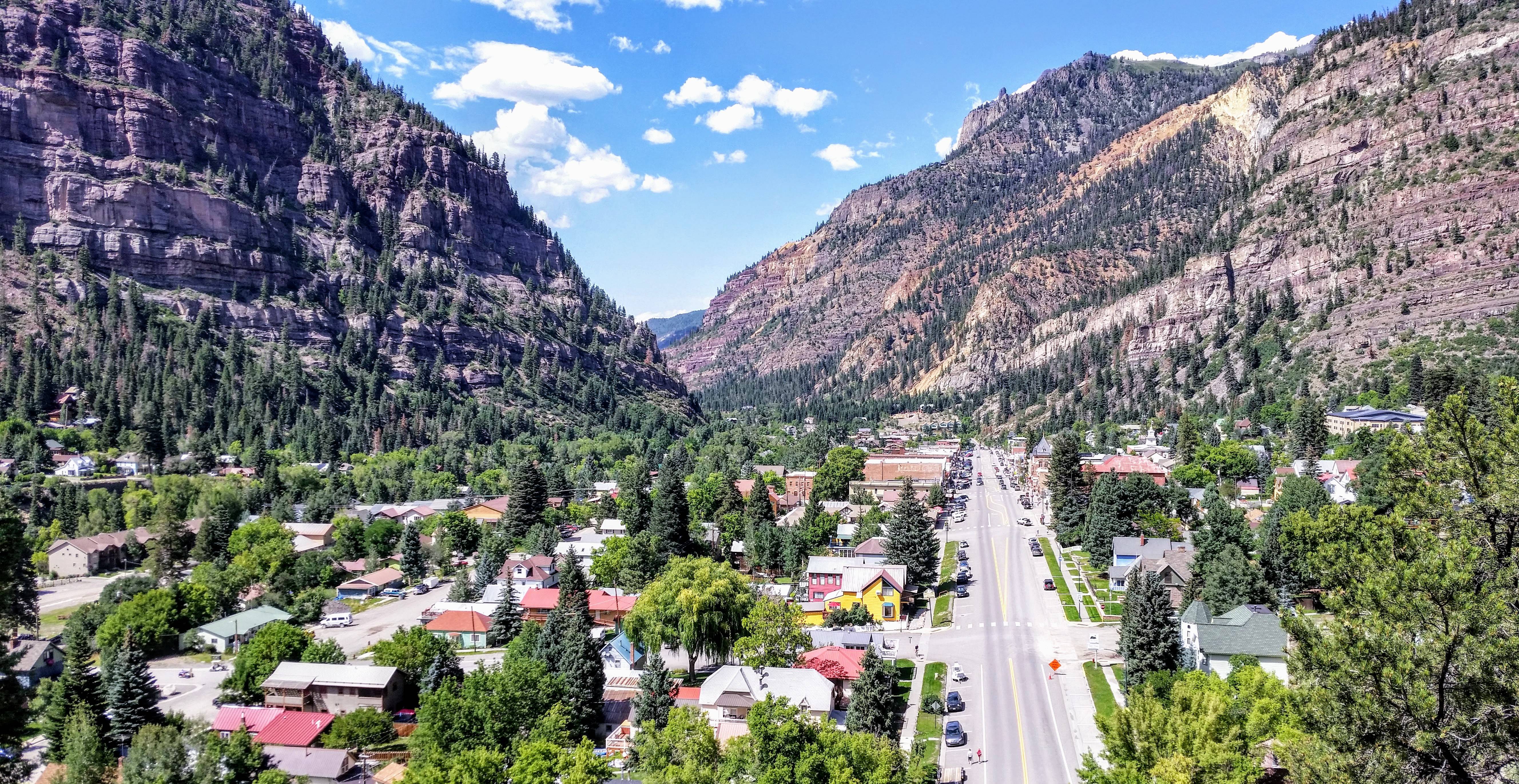 As I passed through, a guy from ADV Rider was sitting on a rooftop brewery. He sent me a message but unfortunately I did not see it until later. It’s just always noteworthy when I am recognized out in the real world. 🙂

A photo for which I was hunting was one that would combine a triumvirate of elements which had made Colorado’s scenery special to me: Mountains, aspens and wildflowers. This is a good candidate to represent Colorado: 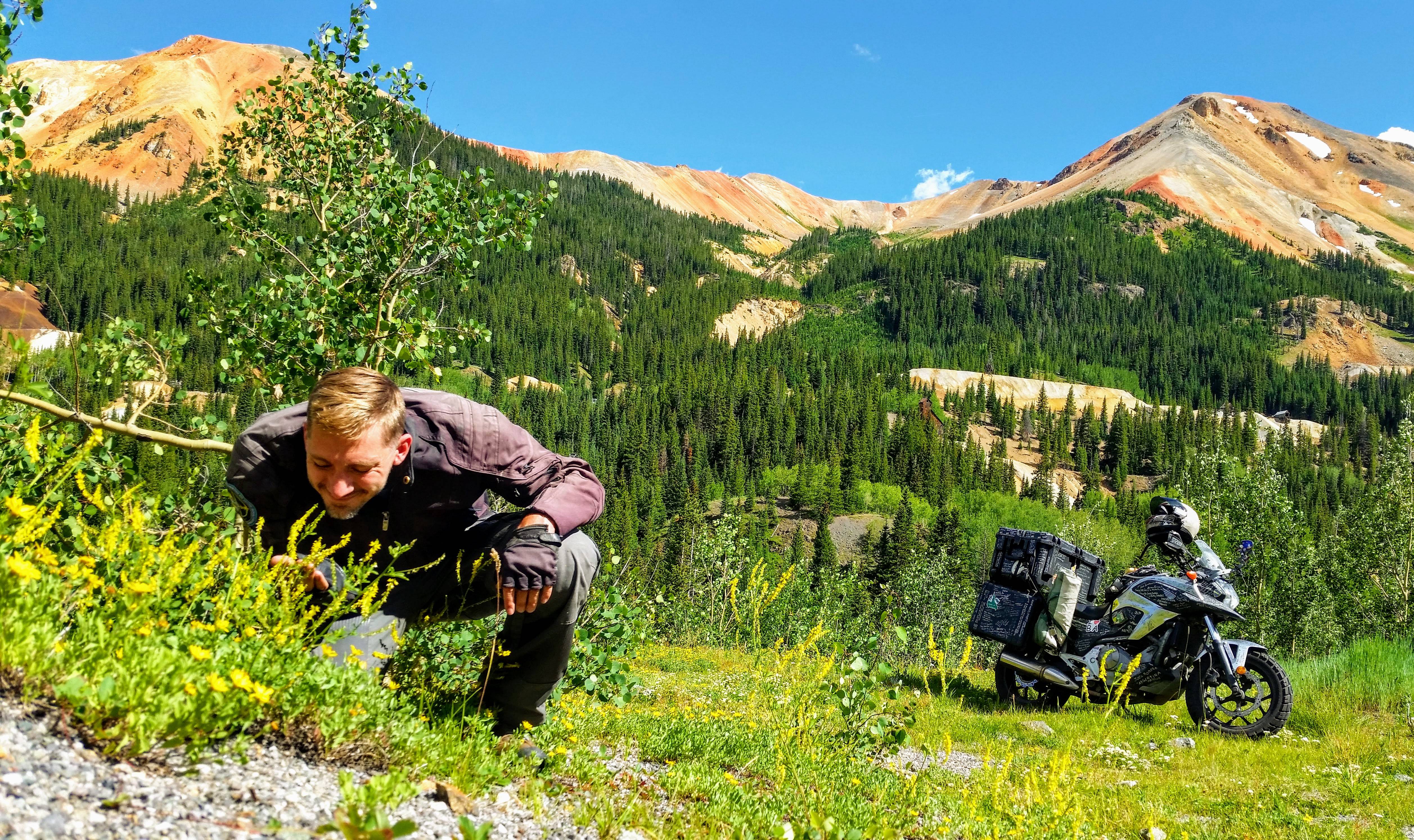 The riding on the Million Dollar Highway was wonderful. Apparently that price didn’t include guard rails.

I spotted a little road that wound up a valley in one of the hairpin turns. It was a great detour.

The video above is a good example of what it normally sounds like inside of my helmet. I’m pretty much always singing, talking to animals, apologizing to Annie for bumps or conjugating Spanish verbs. 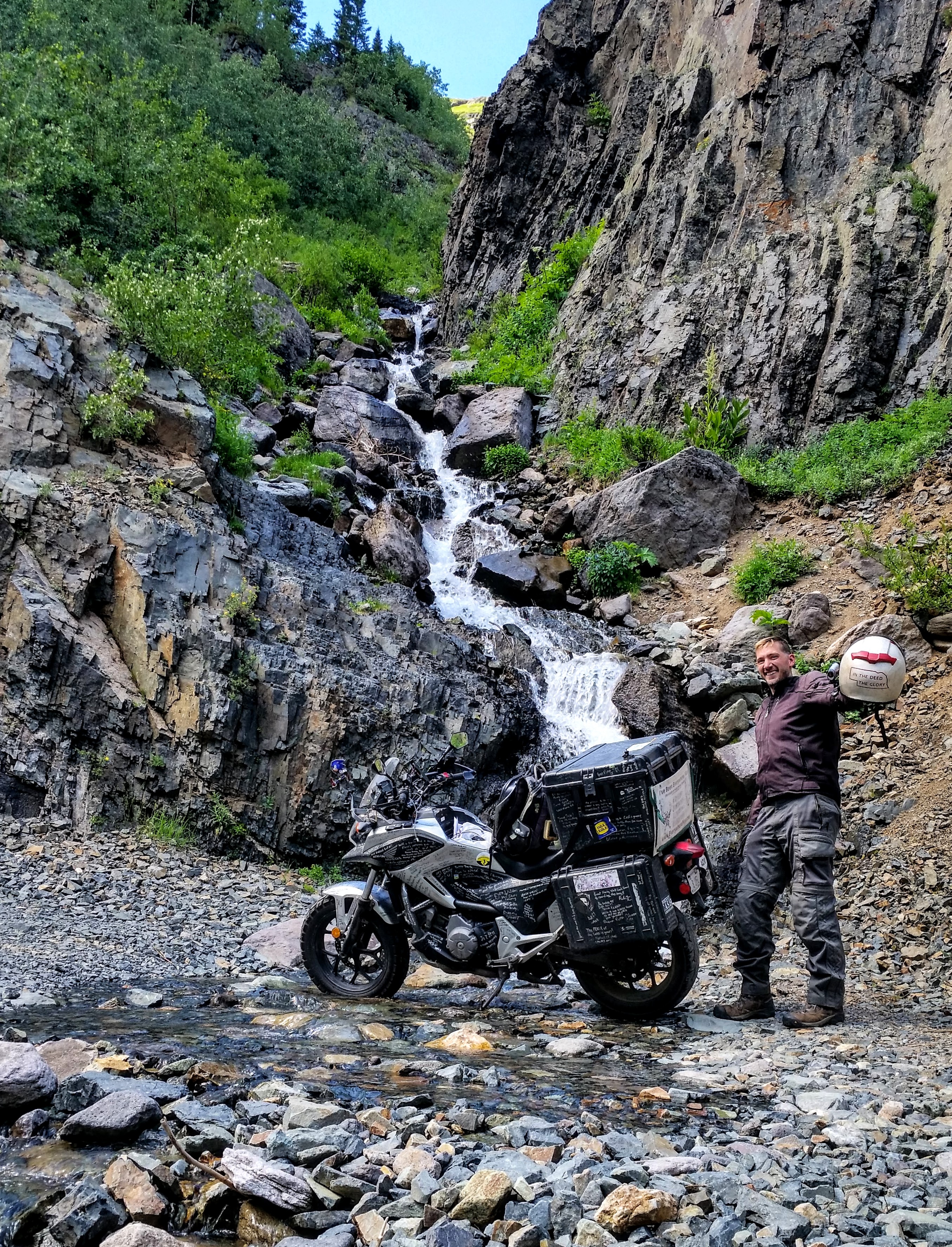 I hiked up the main waterfall just a ways, taking in some more great views. 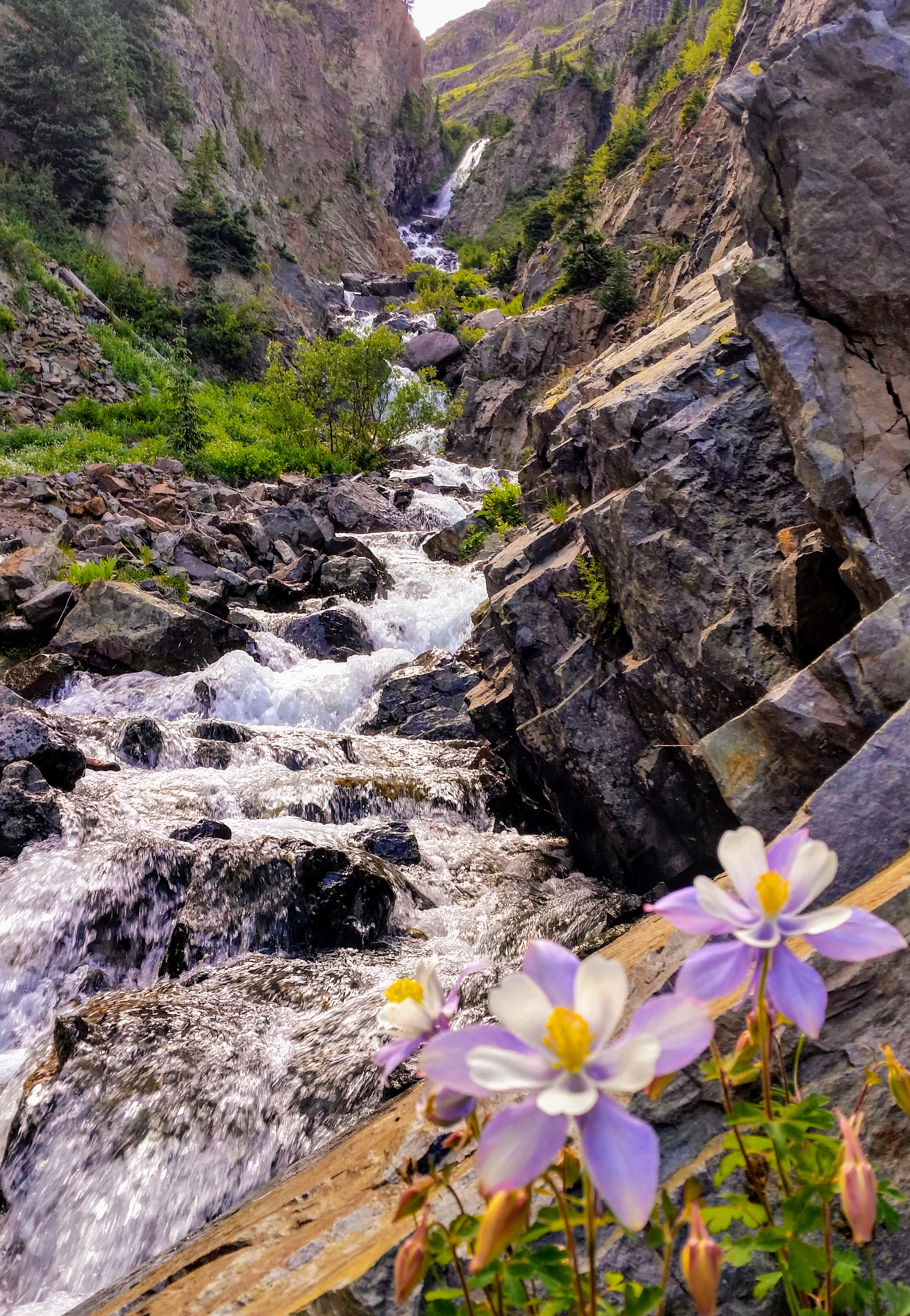 Those flowers are Columbine, the state flower of Colorado. 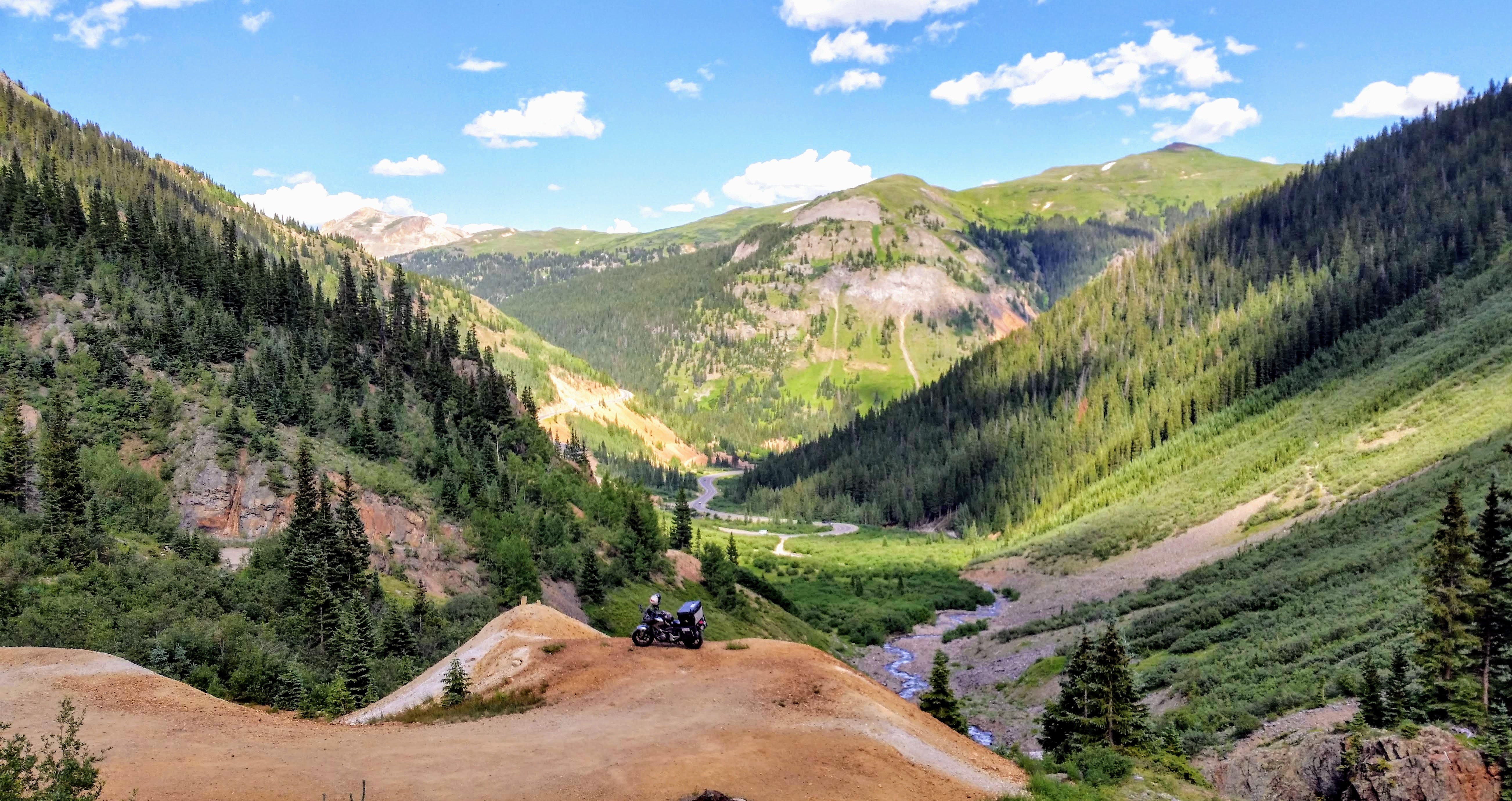 There is a narrow-gage passenger steam train which runs through this pass.

I got about a 20% wave response rate, which seems pretty good.

I set up camp around Mesa Verde and had a pleasant evening. 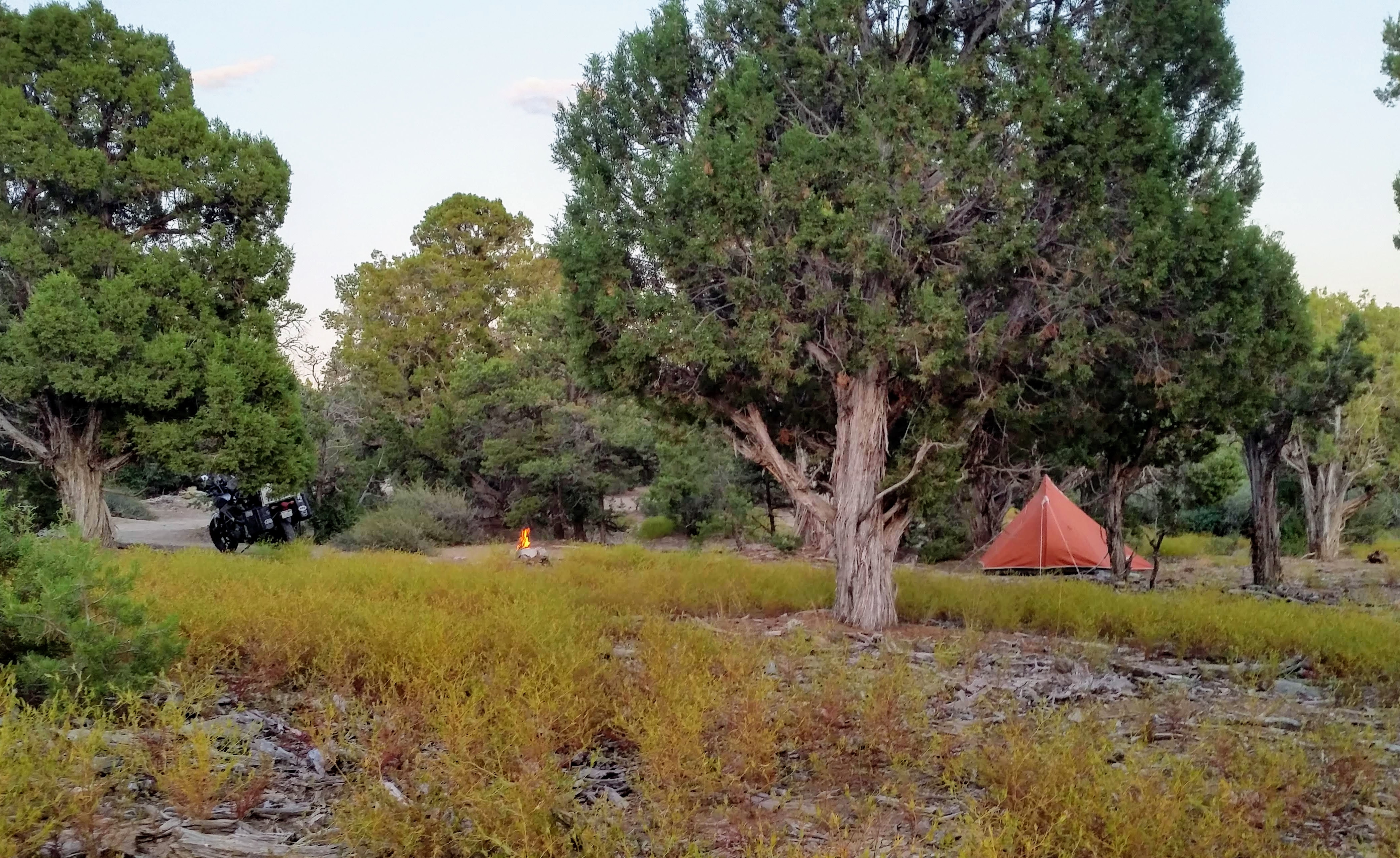 I called my Mom to wish her a happy wedding anniversary. This would have been the 50th for her and Dad. They sure modeled what a great relationship should be like. I’m really proud of how my Mom continues to count her blessings, even on difficult days like this one. 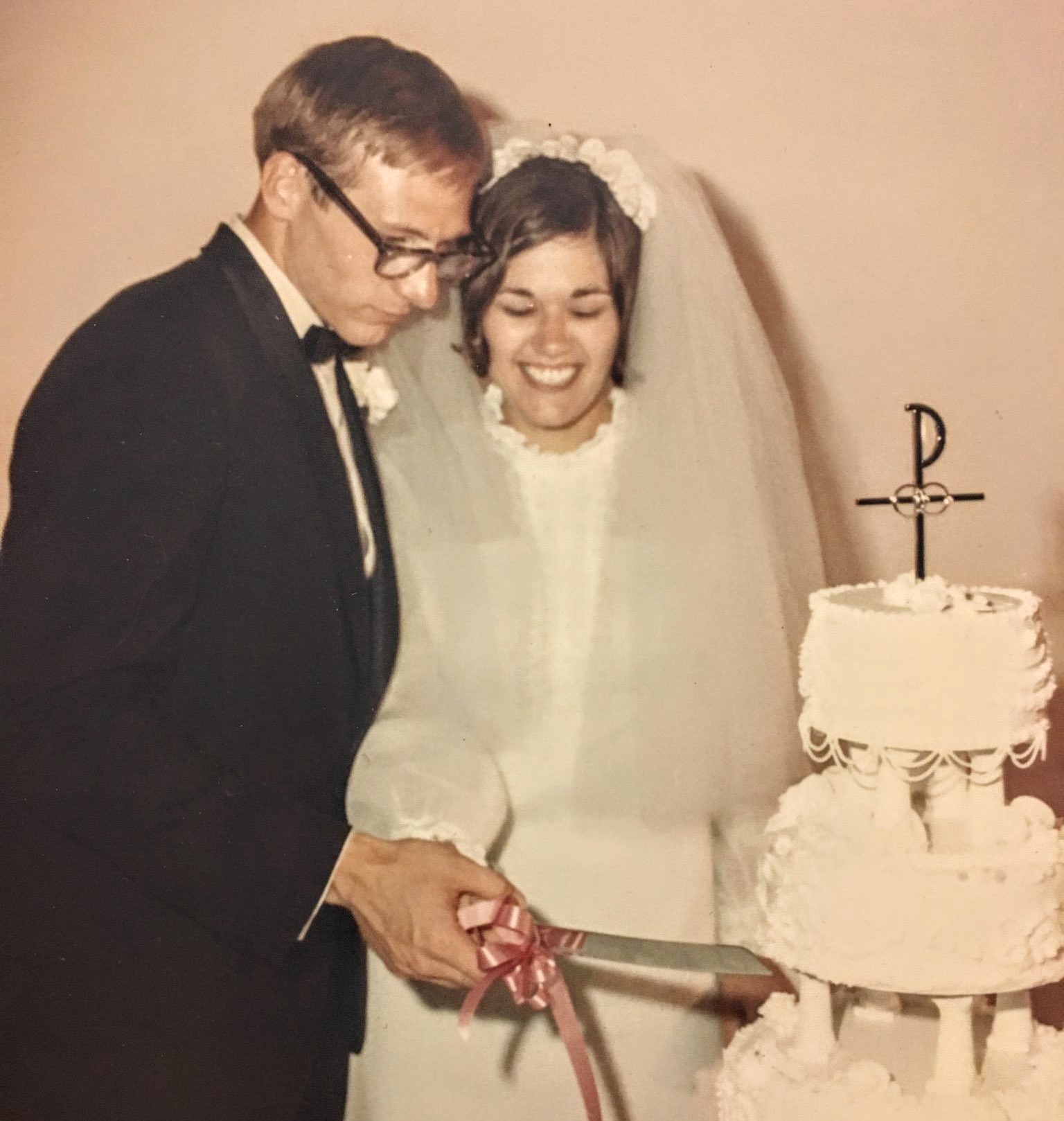 I spent a total of 20 nights in the state of Colorado. In the context of my trip, this is really an exorbitant number. I’m not sure if I’ve even spent half that many days in any other state. My reunion was part of what made it a long stay, but my attitude also played a part. I was really intent on stopping to smell every wildflower in the whole state.

I’d say my attitude towards this place changed during these days too. It shifted from an appreciation, in almost an academic sense, to a sense of wonder and love. I can’t wait until the next time the Rocky Mountain State welcomes me in.

Realtime update: I’m hanging out in Flagstaff, AZ, having survived my visit to Las Vegas. 🙂 I’ve been productive since I arrived here and may take one more work day before visiting Winslow. I really lingered longer than I thought I would in Utah, so I’m hoping I can pick up the pace just slightly.

I have pretty well decided that I want to take another swing at visiting Ombabika before I complete my journey. I know right where to look now and I’d like to finish my quest without any feelings of unfinished business. The road to get there will probably close for the season in October, so I need to be done by then. That’s the main thing pushing my pace right now, but I hope to still take time to smell many more wildflowers along my route. 🙂

8 thoughts on “Stop to Smell”