On the road again in California! The city of Bakersfield is the next place on our list. Additionally, an old friend comes to visit and we attempt to hug some sequoia trees. Have you ever walked the streets of Bakersfield?

Realtime update: It’s all done! In case you don’t follow on facebook, my journey has concluded successfully. Next order of business is to get caught up here. I hope to publish lots of content over the coming weeks. I’ve needed some time for relaxation, reflection and isolation, but now it’s time to get back to work!

Bakersfield day! This California city lies at the southern end of the Central Valley. 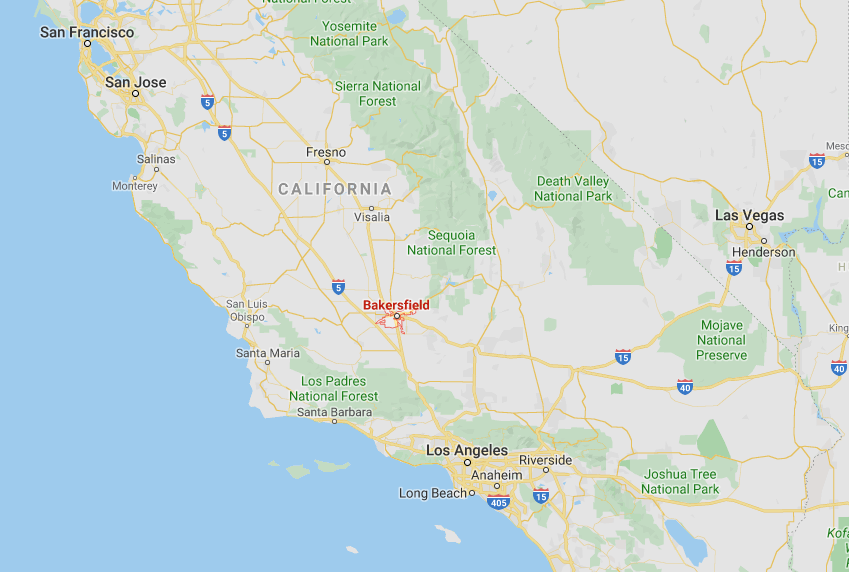 I was still feeling out of sorts—tired, sluggish and still adjusting to bouncing around on my blown rear shock—but I had a couple of wonderful things to cheer me up. First was that I would be visiting song place 88 of 92, Bakersfield. Second, my old friend Adam was coming to town. (“Old” refers to the age of our friendship. Adam is still just a young pup.) Revered readers of this quality publication will remember that he was my host in Joplin, MO. 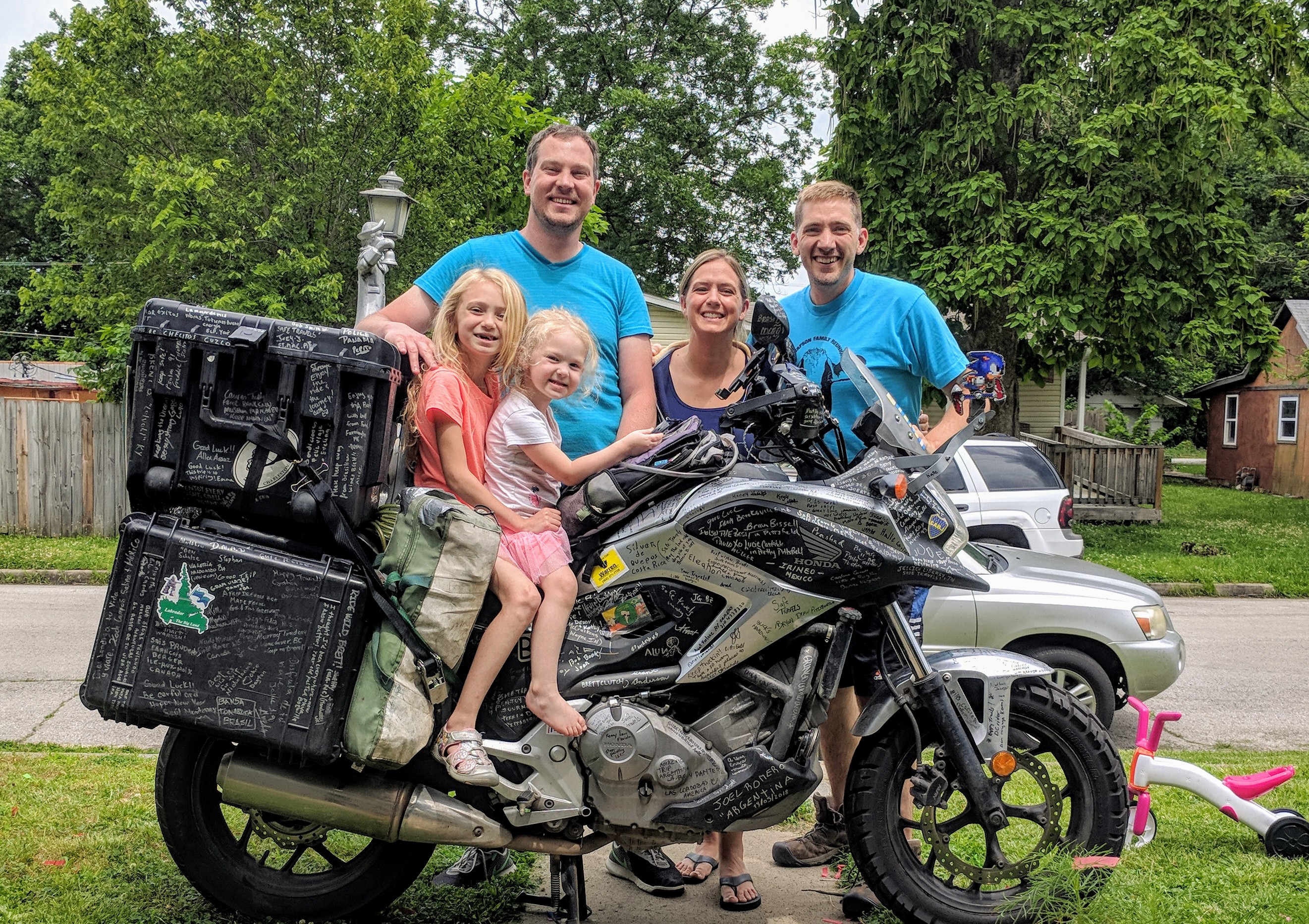 Adam and Natalie have been such tremendous supporters of my quest in more ways than I am able to recount and many more ways than you would prefer to read. From early on in my trip, Adam had been hoping to join me at some point. California was the perfect setting for a weekend reunion.

Bakersfield is in the middle of Kern County, which is roughly equal in area to the state of New Hampshire. The first thing to strike me about this region was the number of oil pumpjacks.

(Just a reminder, Sonic’s leg went flying off the previous day. I hadn’t fixed him yet.)

I would learn later that Kern County is one of the most prolific areas of crude oil production in the world. The most recent, reliable data that I could find was from 2011. In that year, it produced more barrels of oil than any other county in the US, nearly three times the amount of the second place county. This was a huge surprise to me, given California’s reputation for being so eco-friendly. 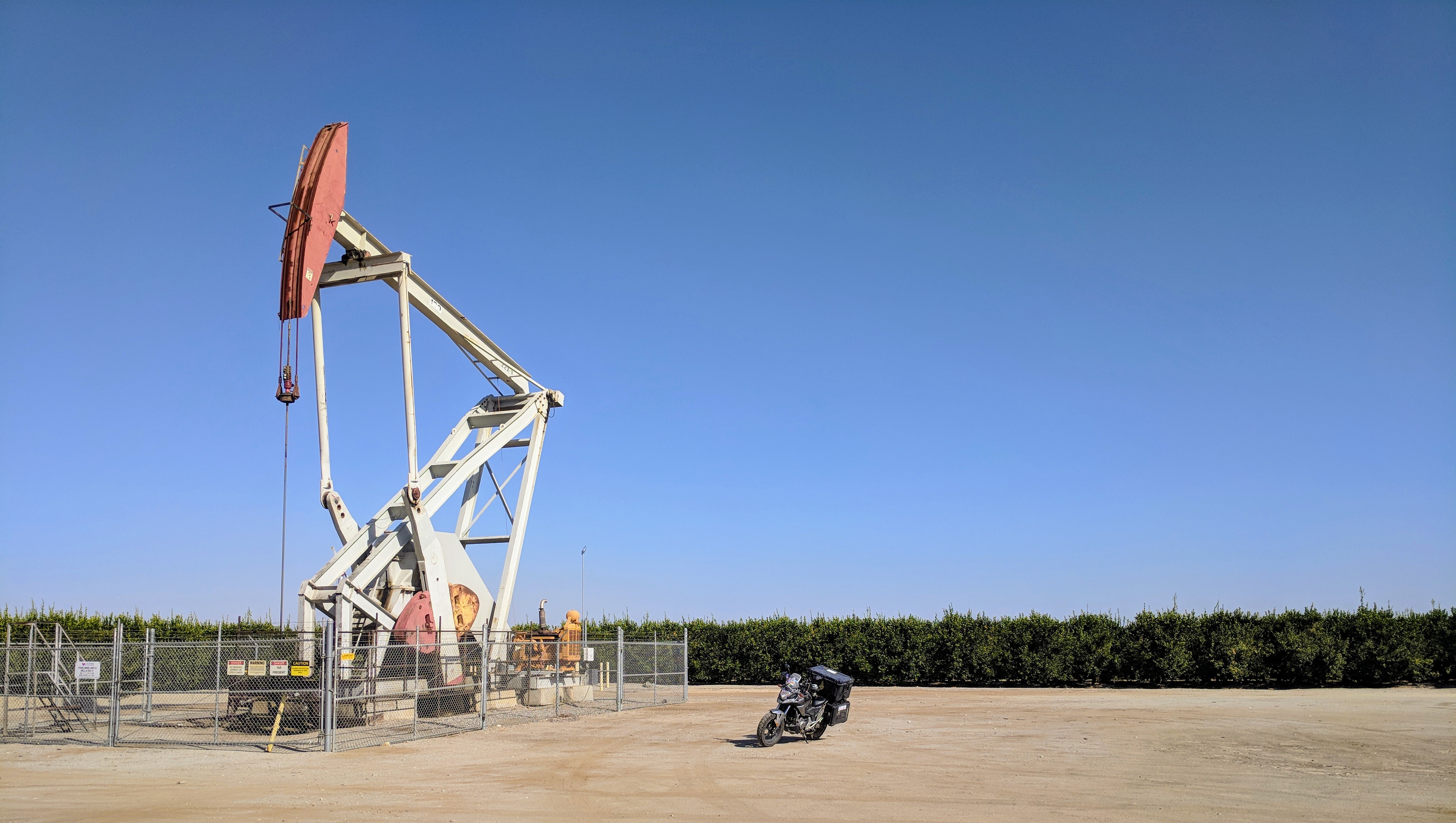 The photo above is an appropriate representation of the area at large: An oil well surrounded by fruit trees. This area is also a powerhouse of agricultural production, with table grapes, almonds, pistachios and citrus fruits being the leading crops. Even before reaching Bakersfield, the region was fascinating to me.

I rolled into town and made my first stop at the visitors center. I met the manager, David, who just happened to have some free time to answer all of my absurd questions about his city. I spent about an hour and a half there and left with more information than I could have hoped for. David was a huge help. 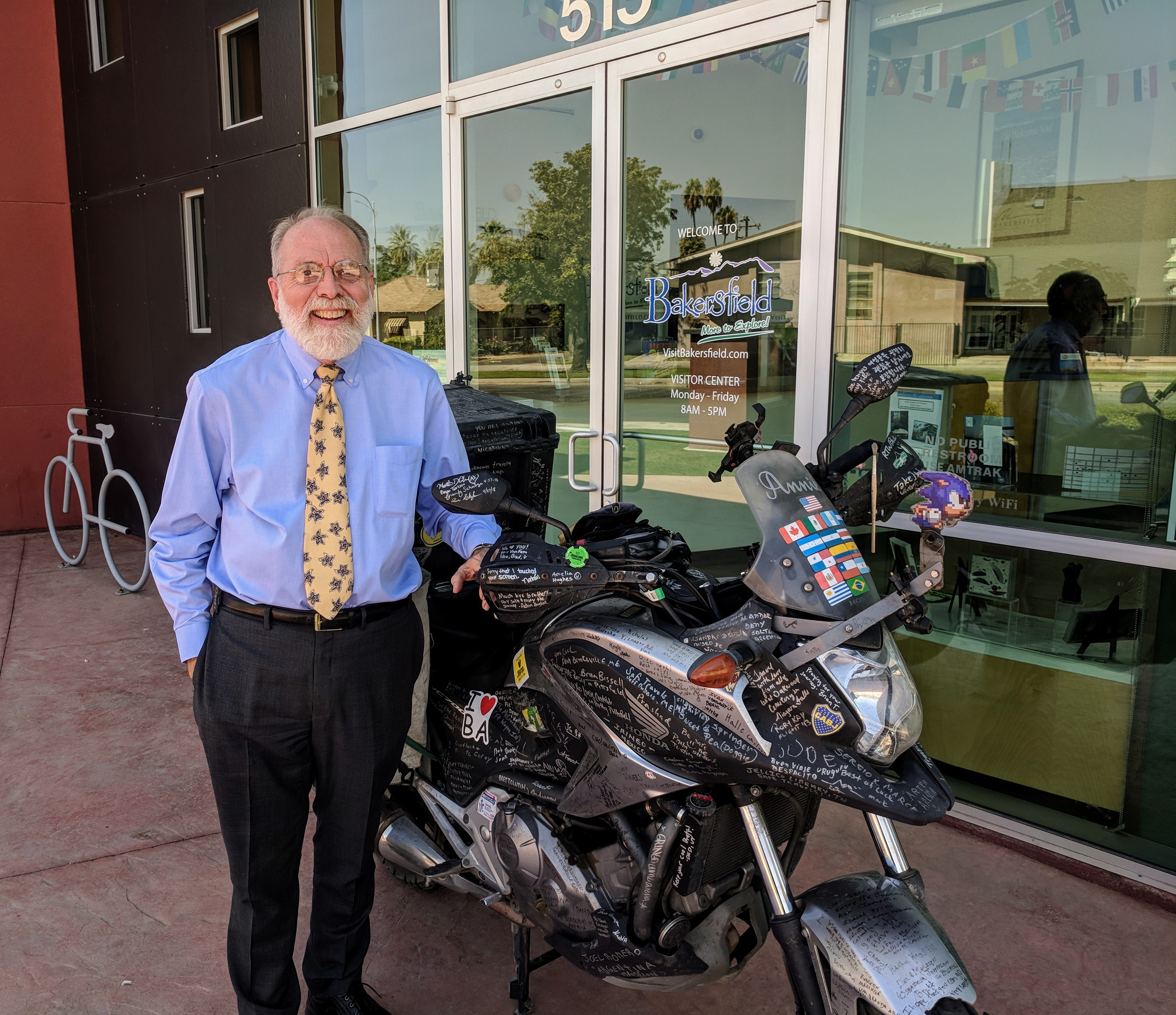 I made a stop into the local Honda dealer to see if I might get lucky with them having a rear shock. Unsuccessful, I stopped into the library and did some internet searching. I eventually found a used shock in Canada for about $100. I didn’t feel comfortable trying to receive it along the way in the US, as I knew it might get held up in customs. The best bet seemed to be sending it to my sister’s place in Vancouver, BC. This would mean well over 1,000 more miles in pogo stick mode, but I was already getting used to it.

I had lunch in an antique store which used to be a Woolworth’s department store. Inside is America’s last Woolworth luncheonette still in operation. 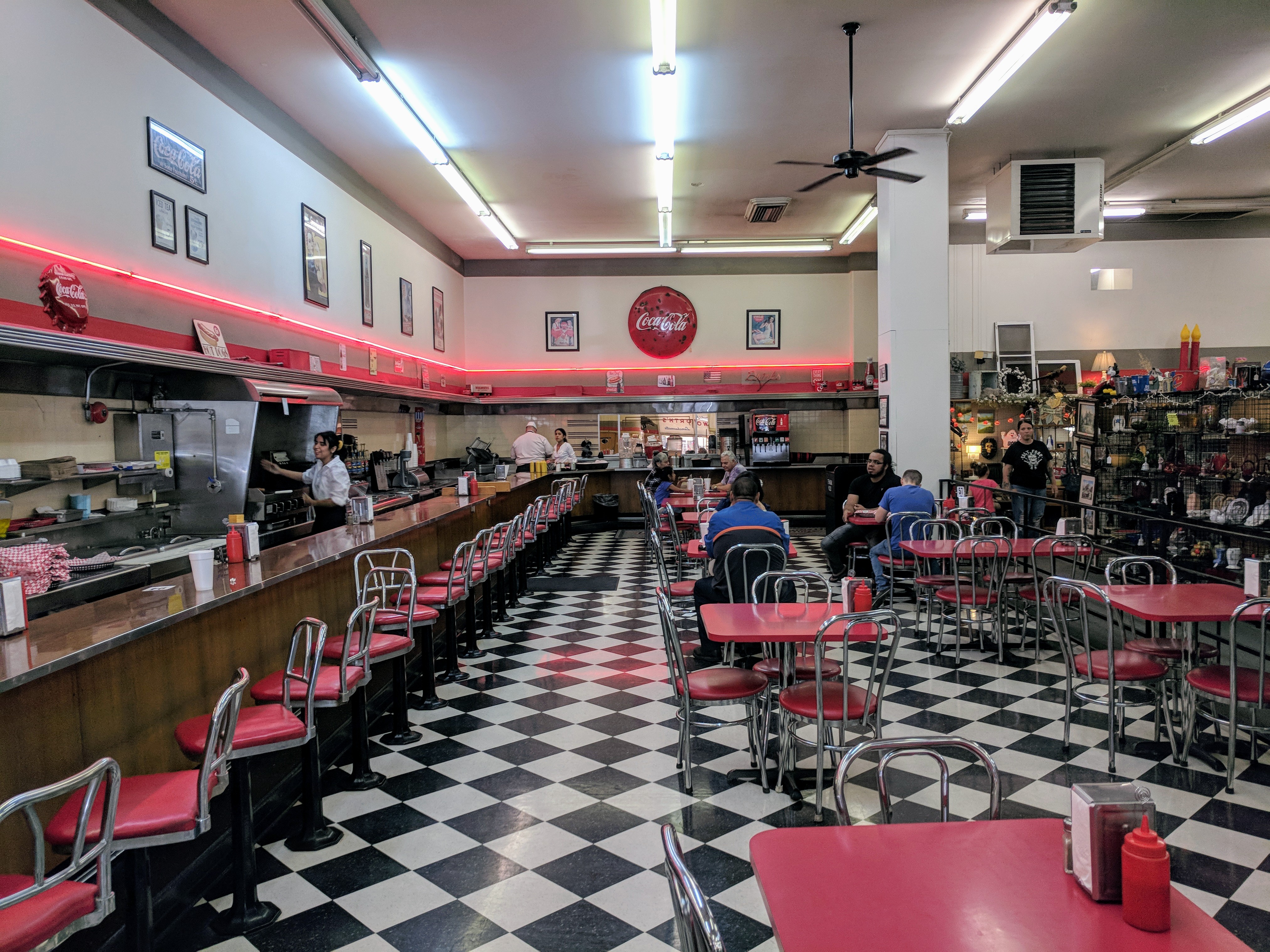 I’m too young to feel any nostalgia about this experience, but these stores were ubiquitous for much of the 20th Century. The food was good and cheap and I enjoyed perusing the store briefly. 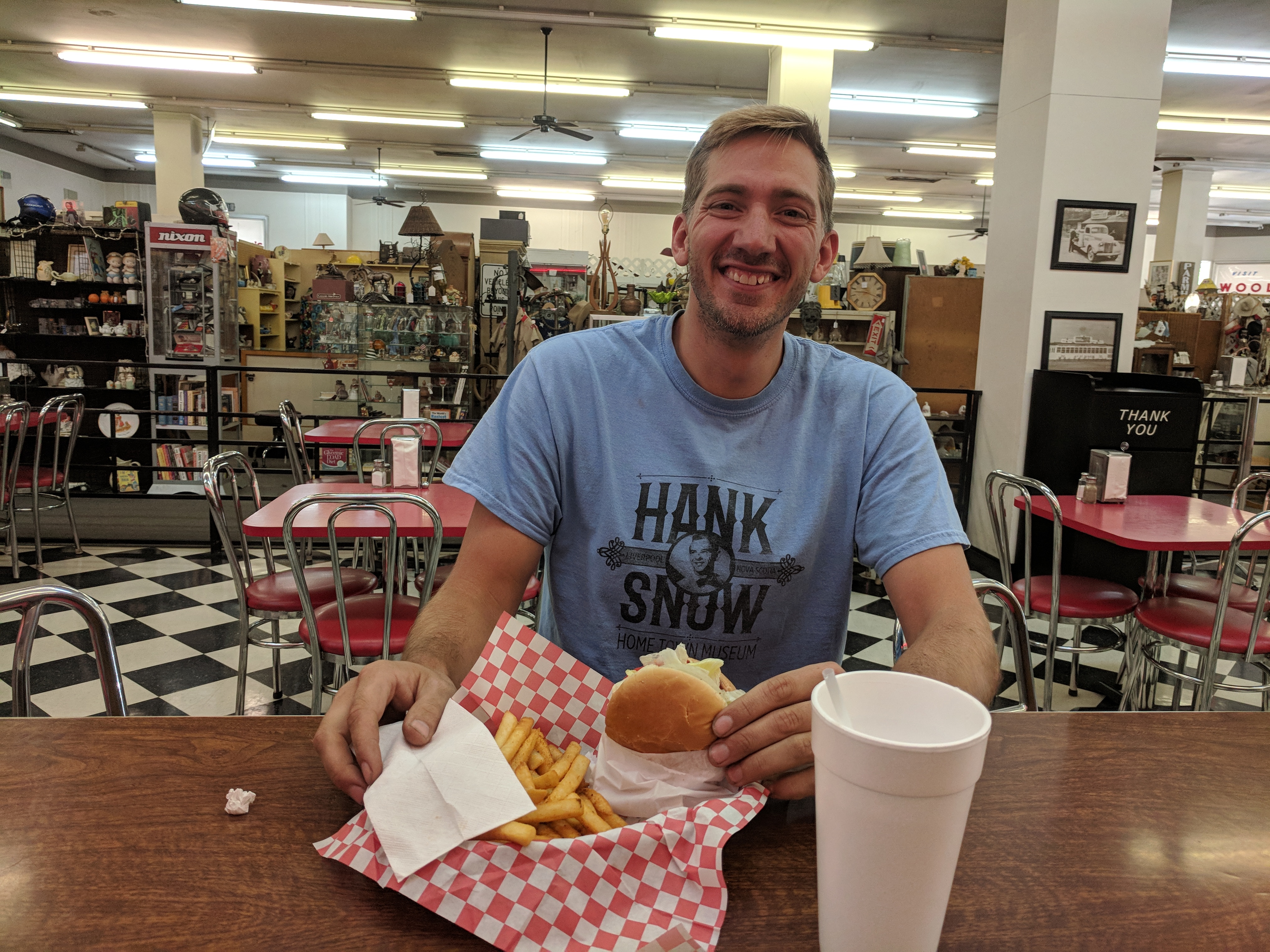 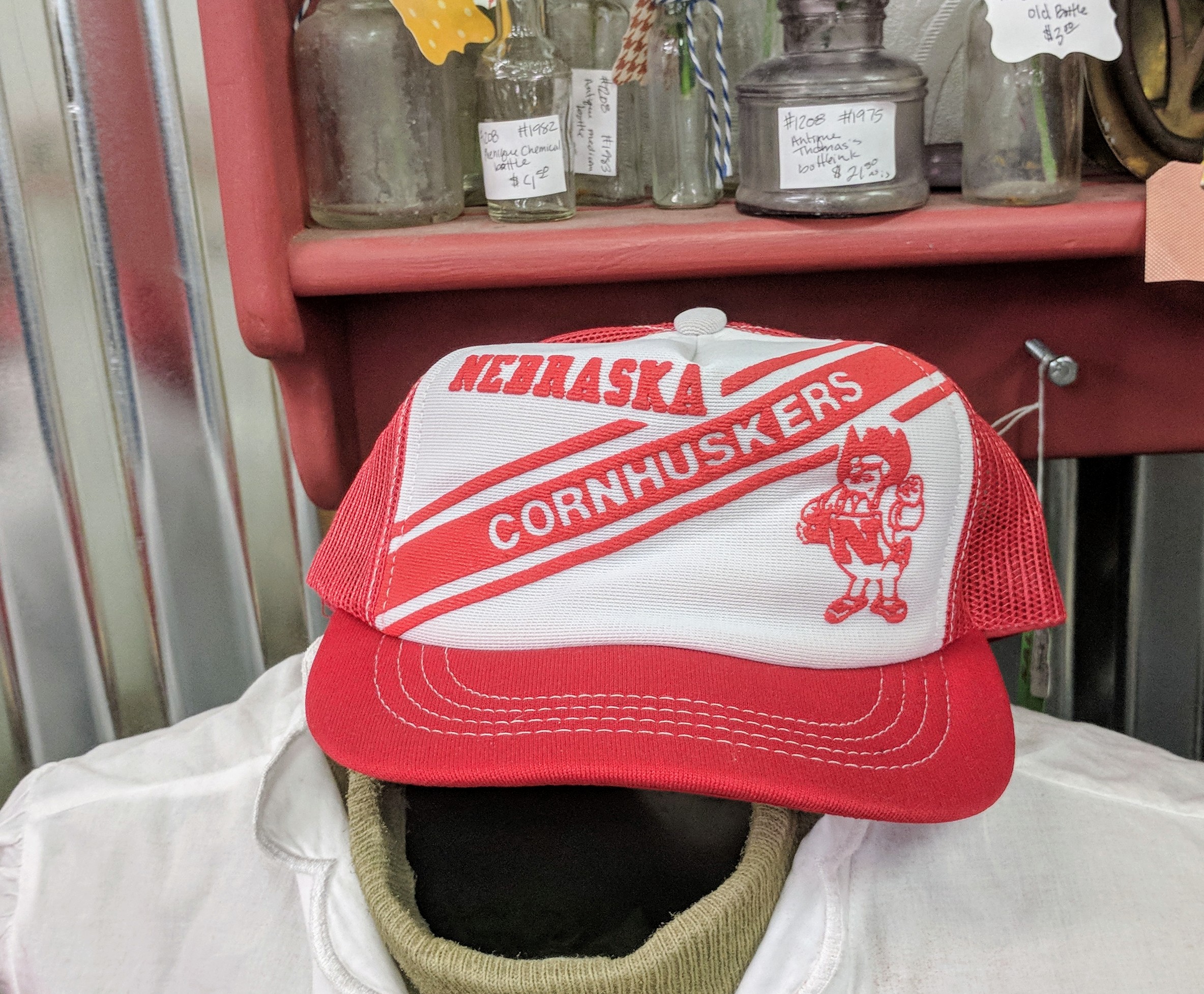 There are a number of good options for iconic pictures of Bakersfield. There is a big shoe which is a fully functional cobbler shop…. 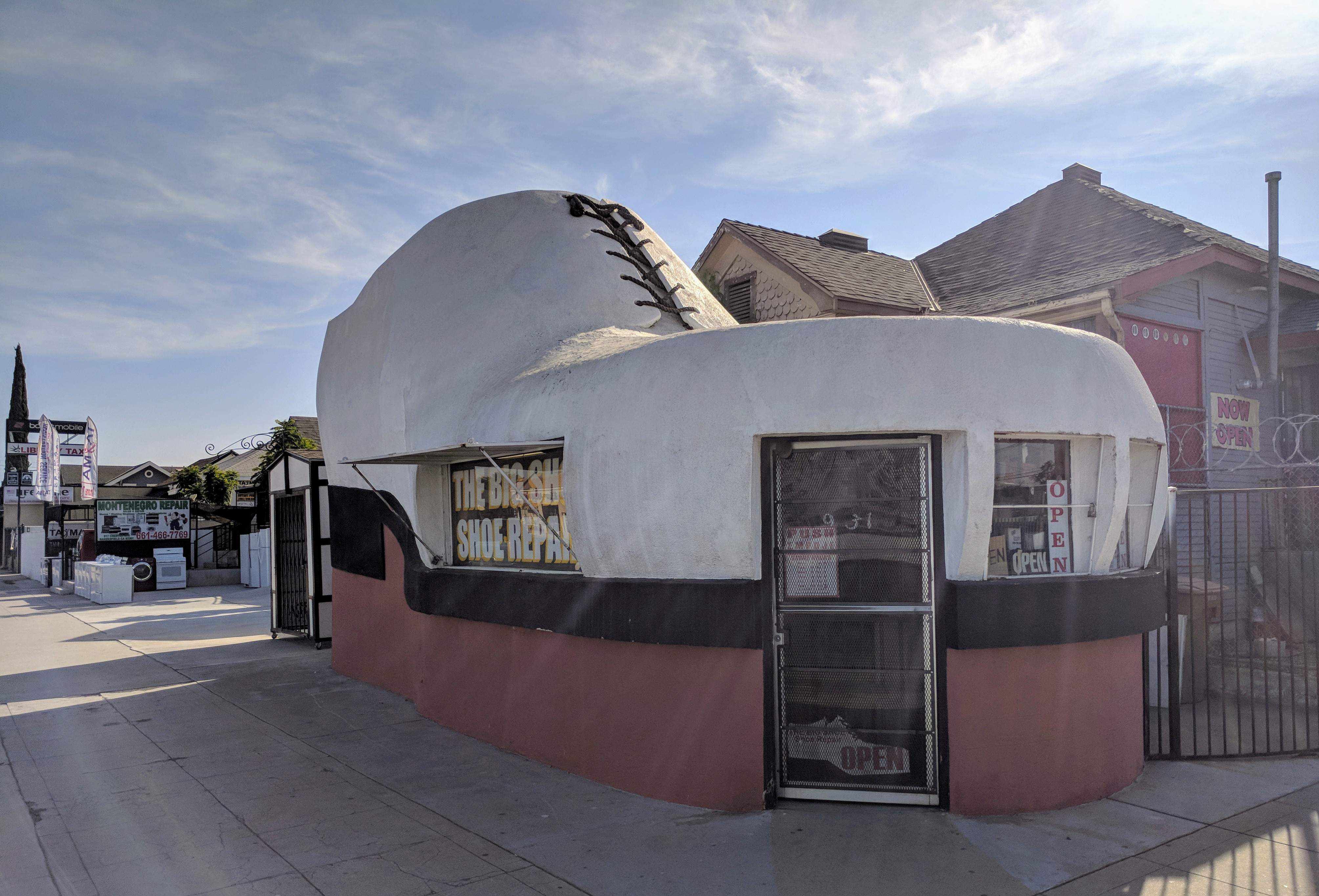 …a clock tower which is incorporated into many of the designs that represent the city…. 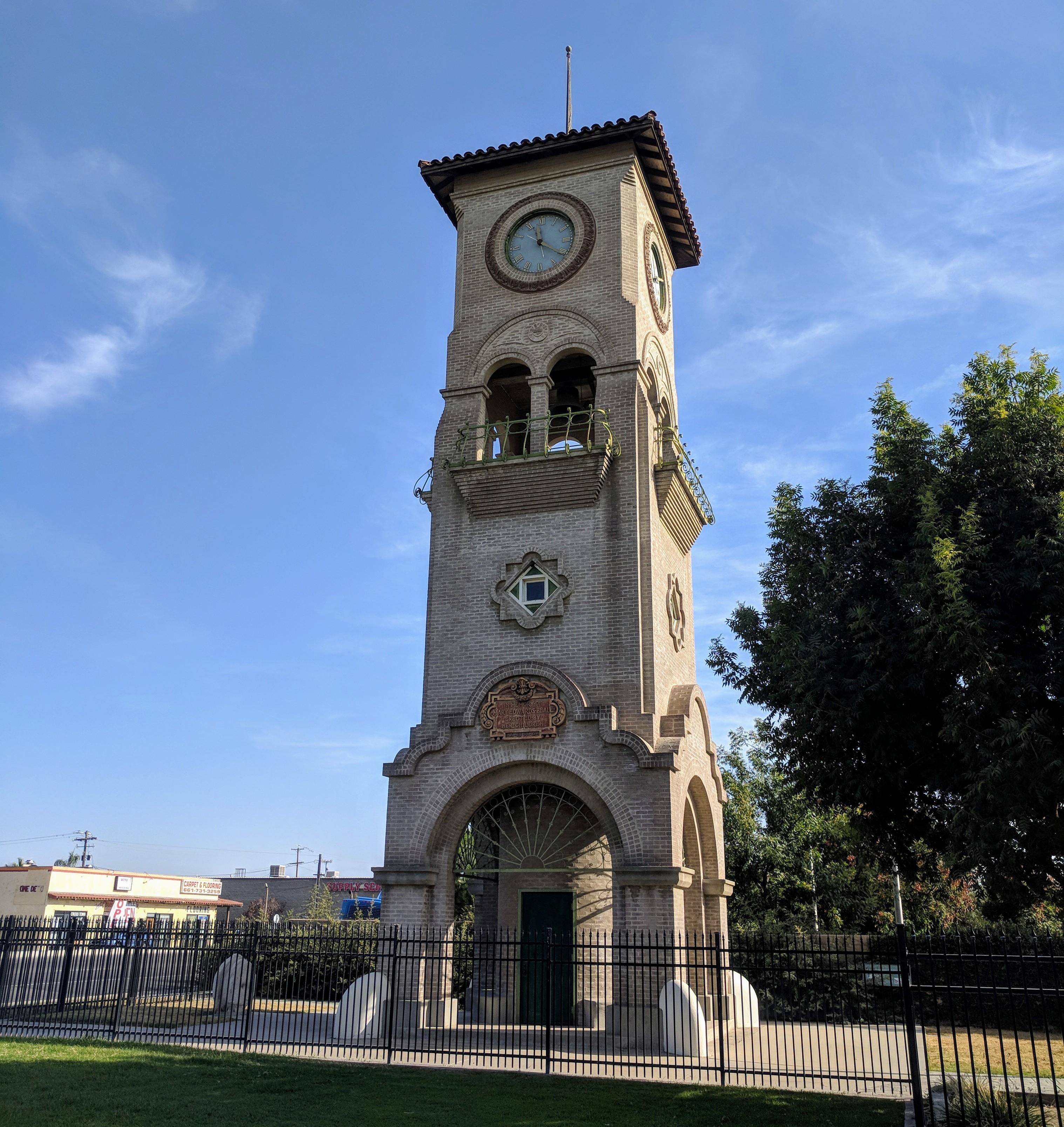 ….as well as the impressive honky-tonk, Buck Owens Crystal Palace. 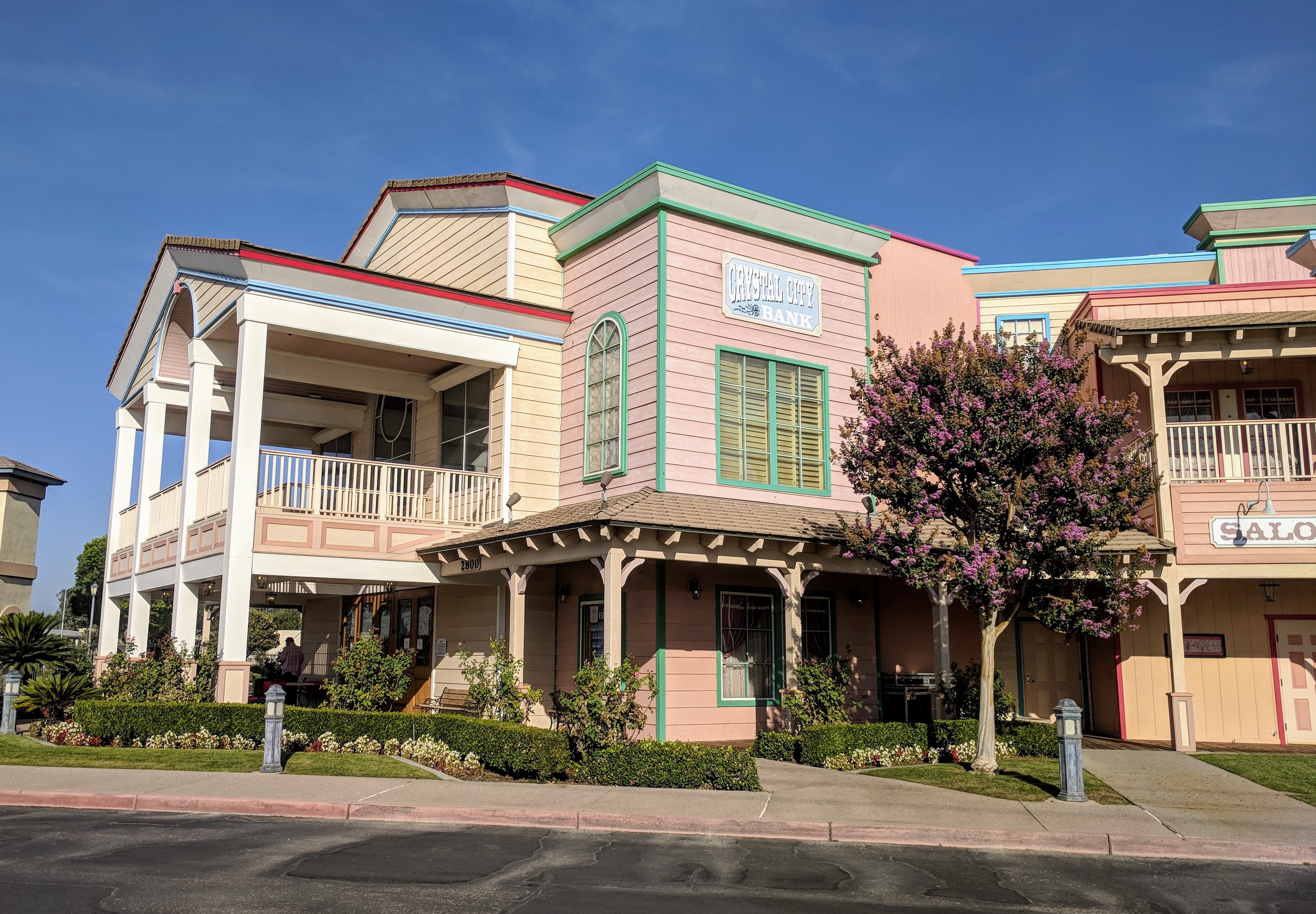 The Bakersfield area saw a population spike when many immigrants from the Southern Plains arrived seeking relief from the devastation of the Dust Bowl. They brought their music with them which evolved independently of the mainstream country music being produced in Nashville. This genre came to be known as the “Bakersfield Sound.”

“Streets of Bakersfield” is the city’s most recognizable musical mention. This is just the latest city in “I’ve Been Everywhere” to be featured more prominently in another song, joining the likes of Winslow (“Take it Easy”), Barranquilla (“En Barranquilla Me Quedo”), and Amarillo (“Amarillo By Morning”)…just to name a few.

I never got to take in any music at the Crystal Palace unfortunately, but they did have a nice statue of my friend, Johnny Cash, inside. 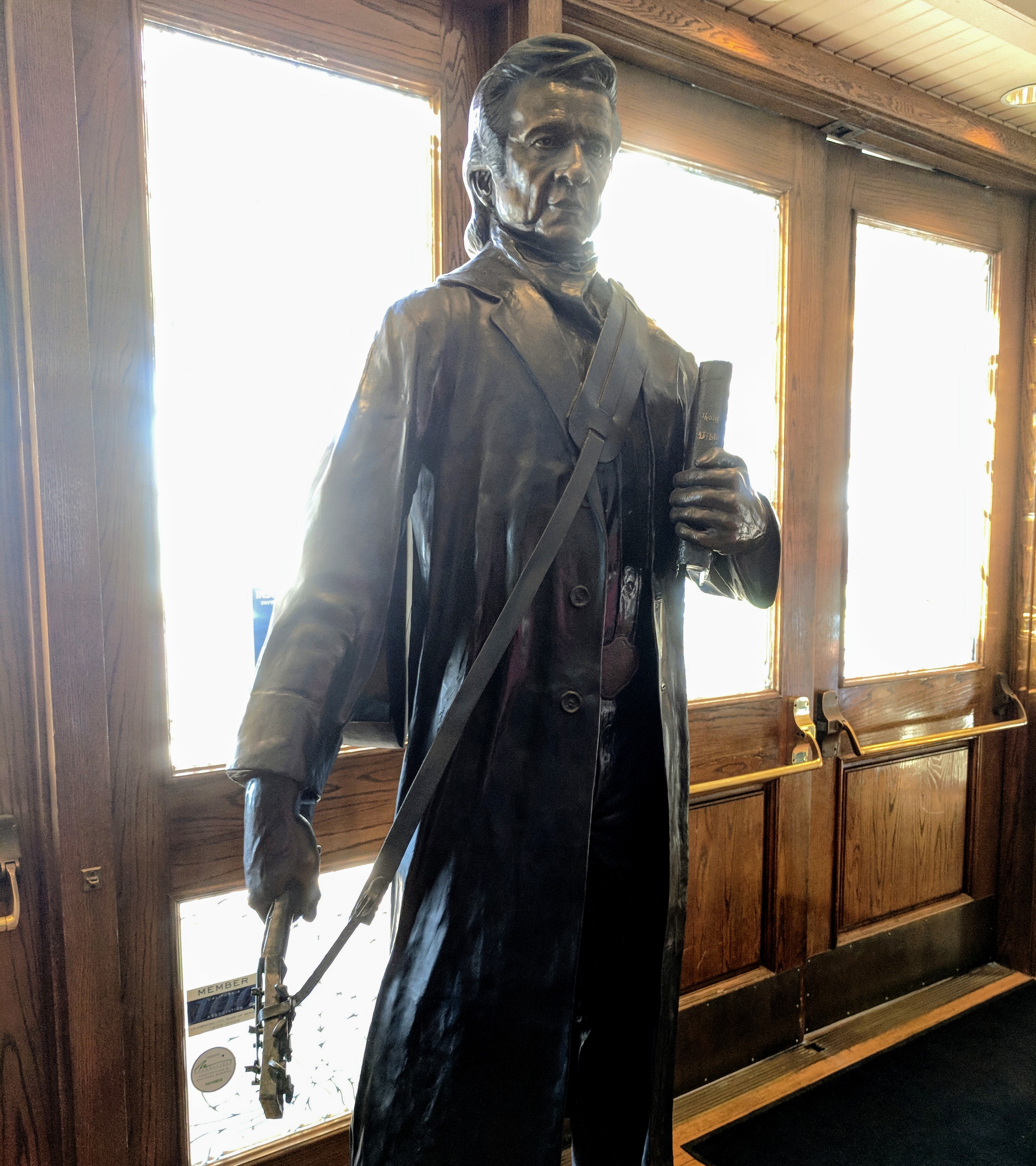 Spanning the street next to the Crystal Palace is Bakersfield’s most prominent landmark: The Bakersfield arch. 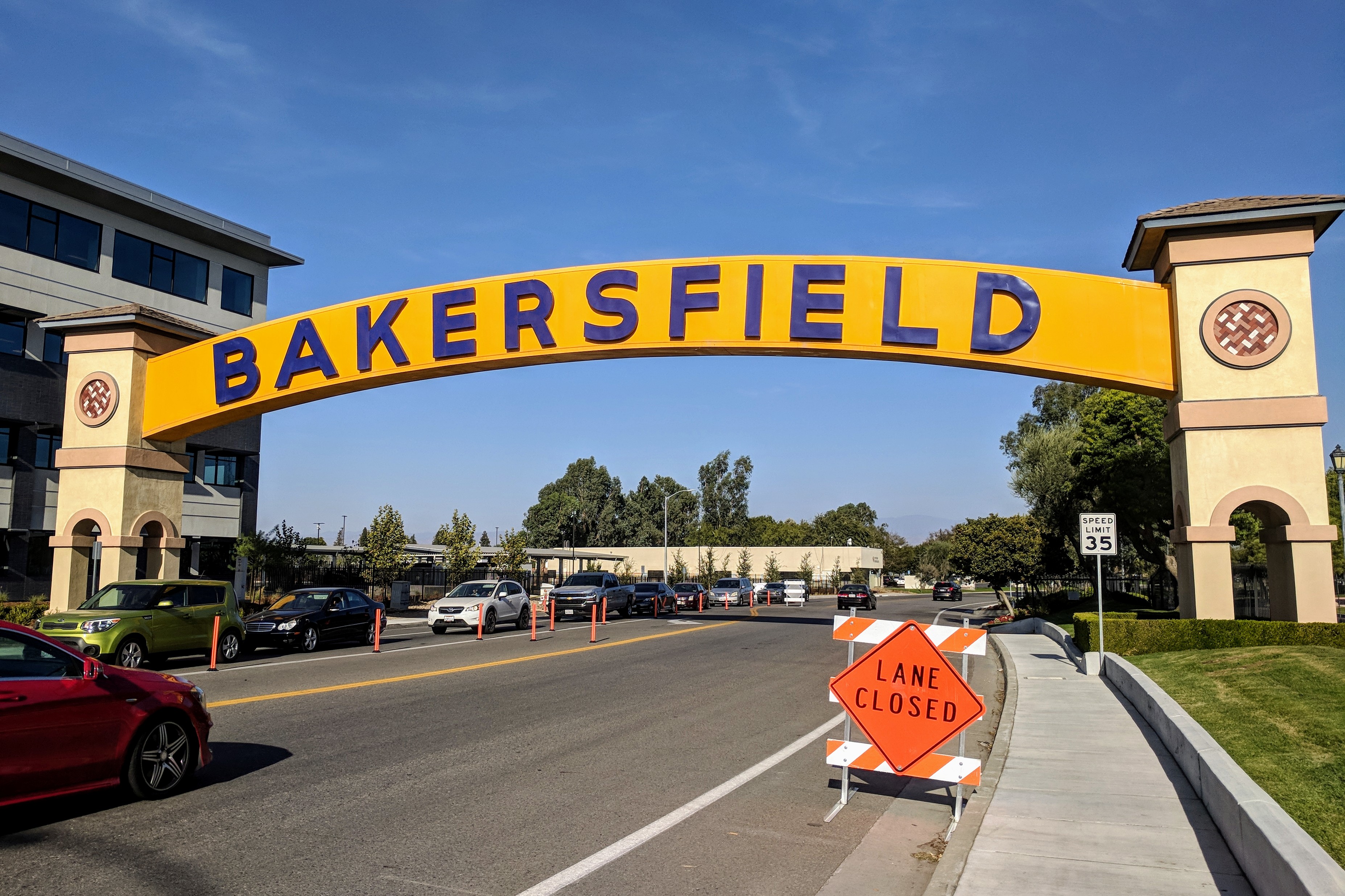 This sign has had a number of iterations and locations, with this current version being installed in 1999. I find it bold but tasteful and it is arguably even better looking at night. 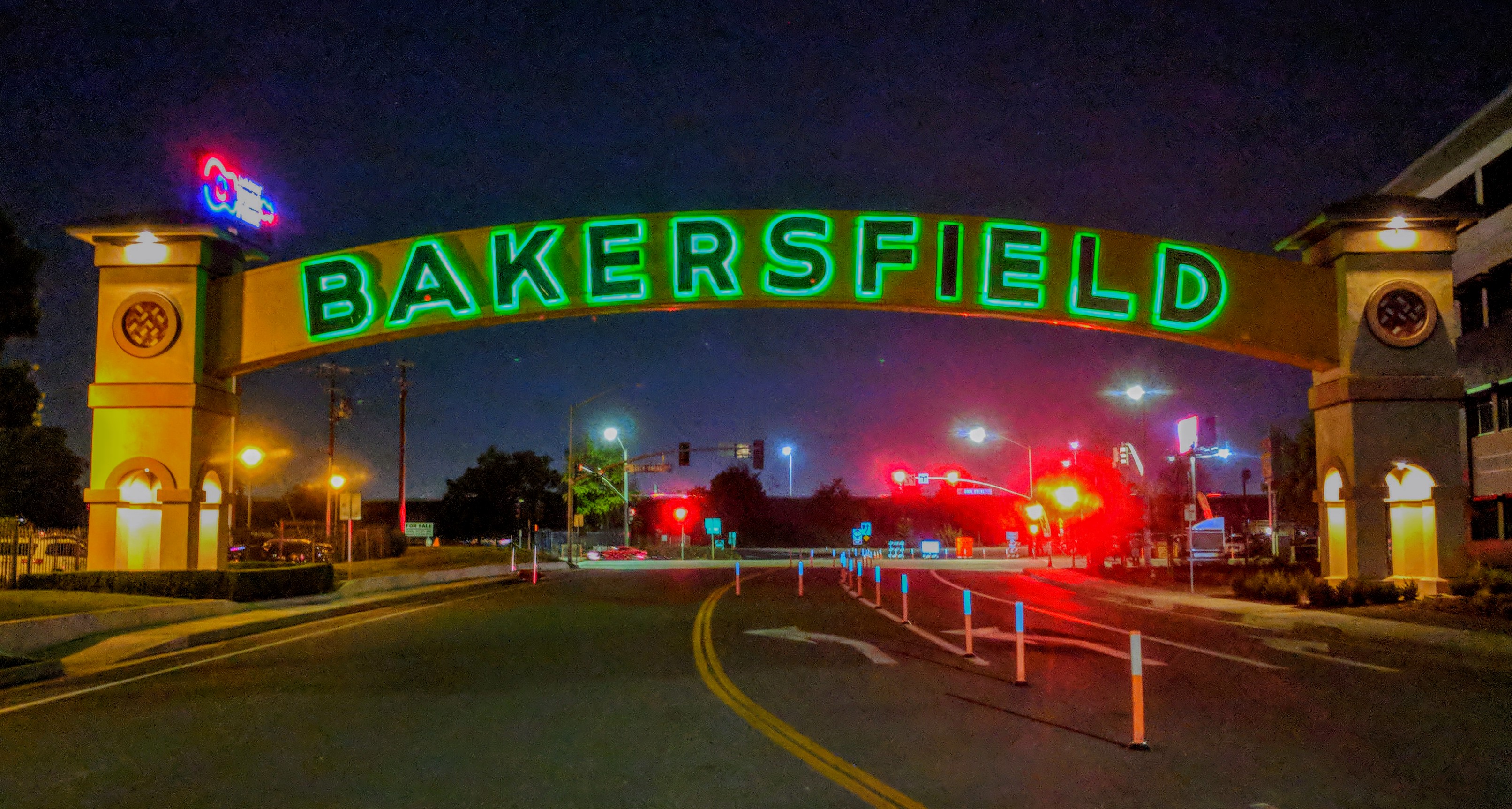 I knew I’d have an extra set of hands the next day, so I decided to wait on getting Annie and myself into the frame.

Though I still had some daylight, I decided to retire to my hotel. Yes, that’s right! A hotel! Adam was flying in to LA and driving up that evening, so I had a nice place to stay. I spent the rest of the day relaxing and getting some work done. Adam got in late and it was wonderful to see him. We had to laugh about the incalculable happenstance of circumstances that led us to meeting up in Bakersfield, California.

We had a nice breakfast at the hotel, then got down to the sign around 7am. In case you haven’t noticed, I’m a pretty big deal. Accordingly, the city of Bakersfield had shut down a traffic lane for me just so I could take my picture. I appreciated this gesture. 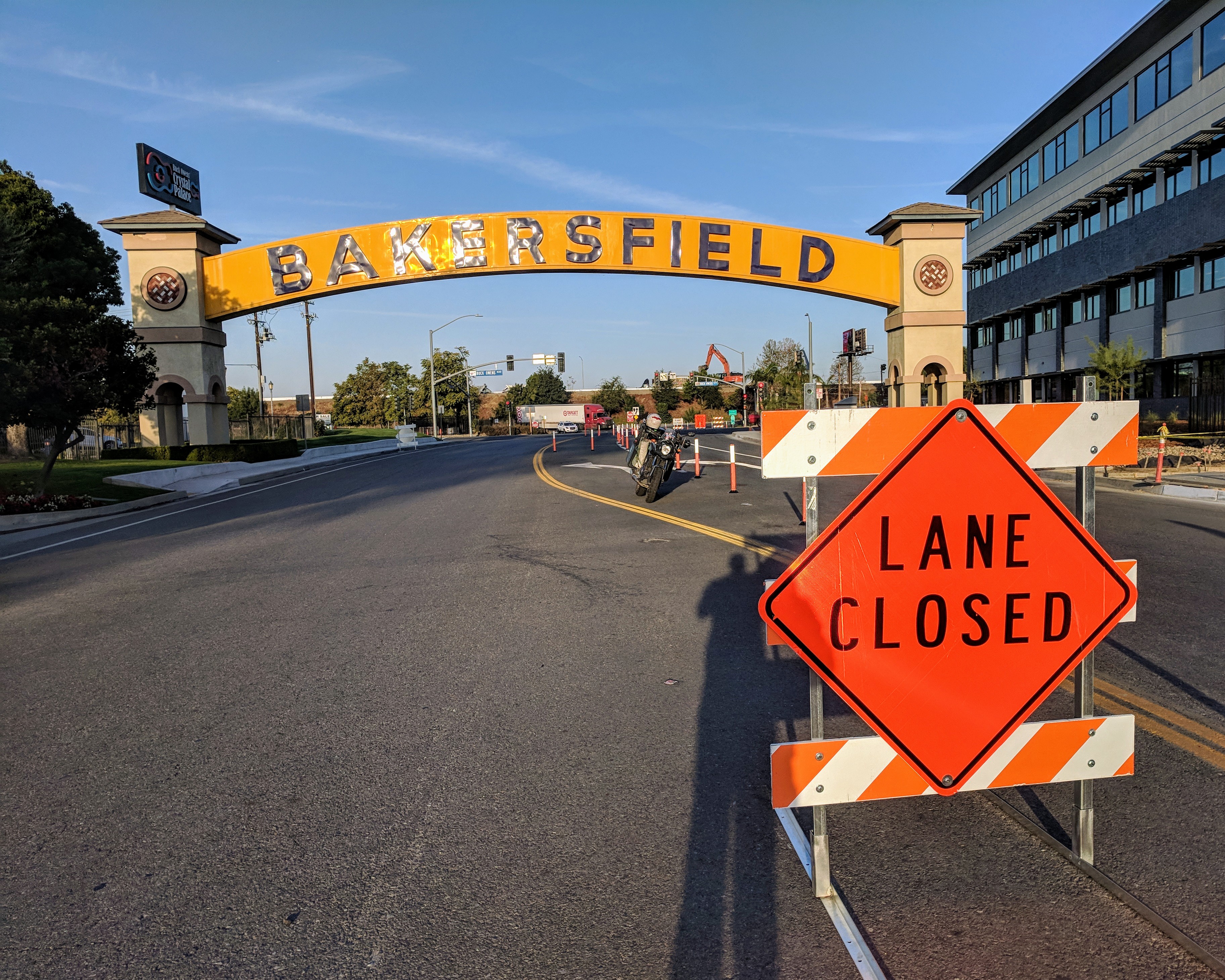 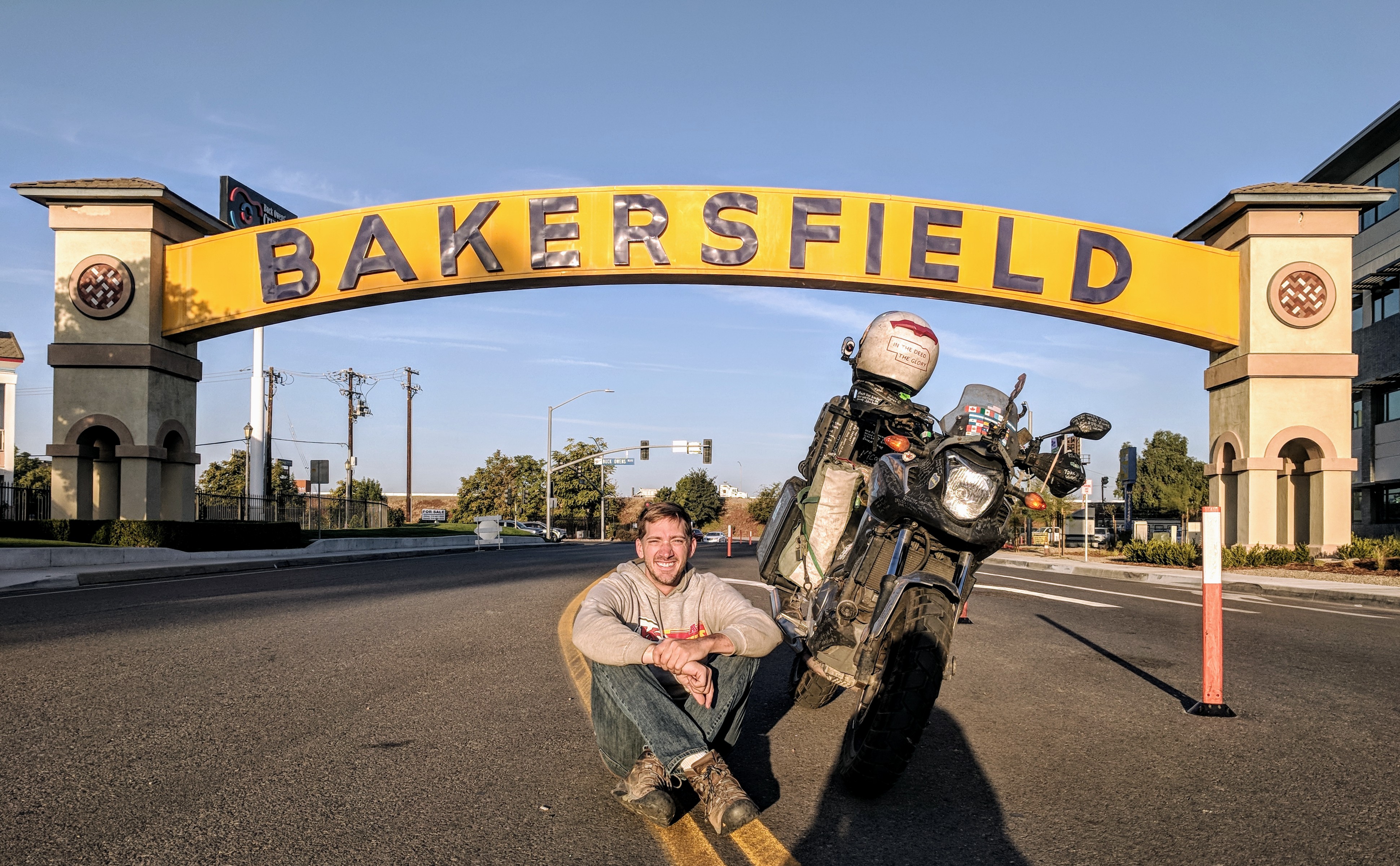 Adam was a patient photographer and worked with me until I got the shot I wanted. Perhaps the greatest compliment you can give a friend is to tell them that they are better than a tripod. Of my friend Adam, this is surely true. 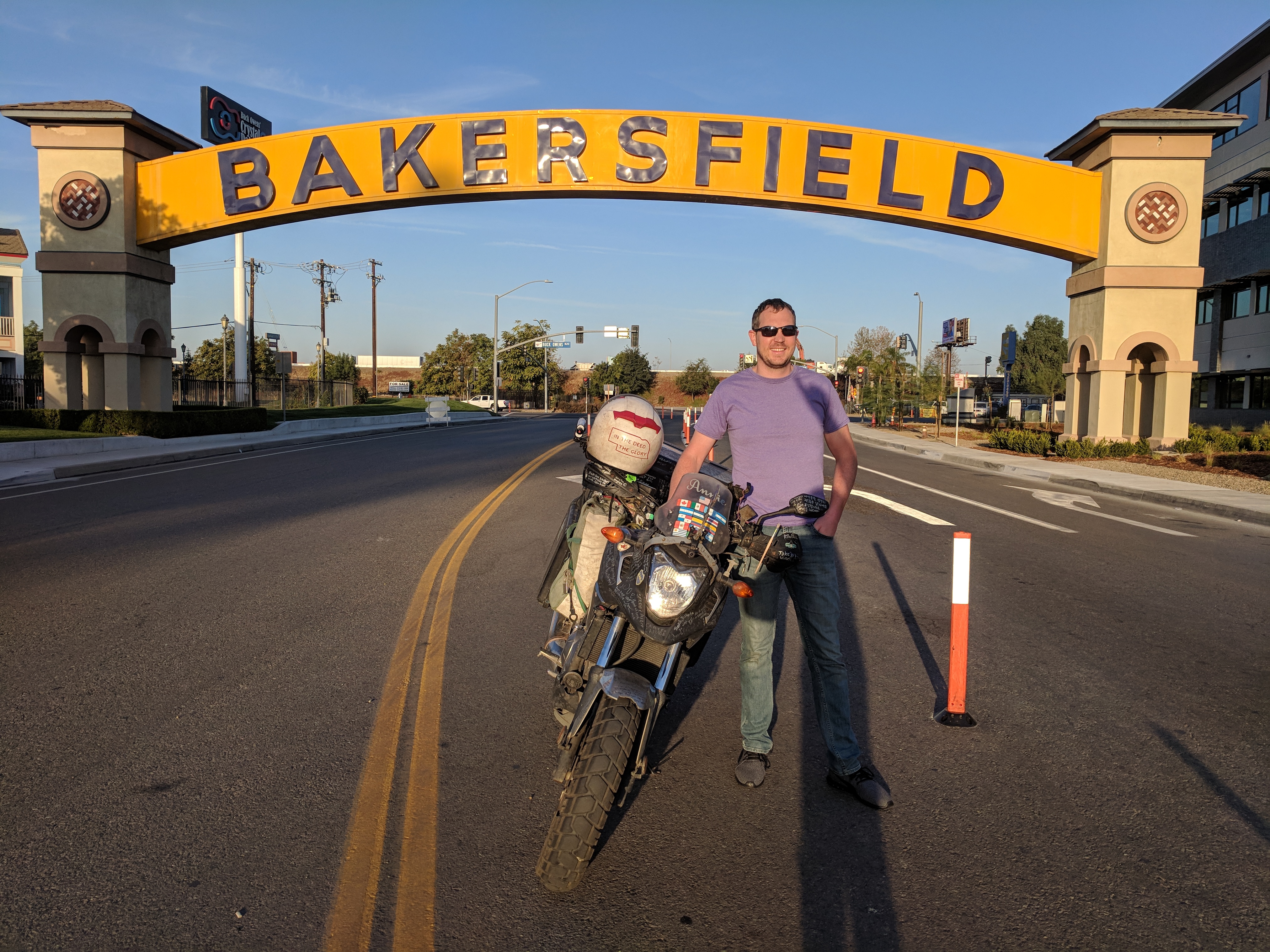 Annie had earned a day off, so we took Adam’s rental car up to Sequoia National Park. This was one of the NPs I was most eagerly anticipating to visit. I’d seen a lot of things on my travels so far, but our scenery had definitely been lacking in giant trees. 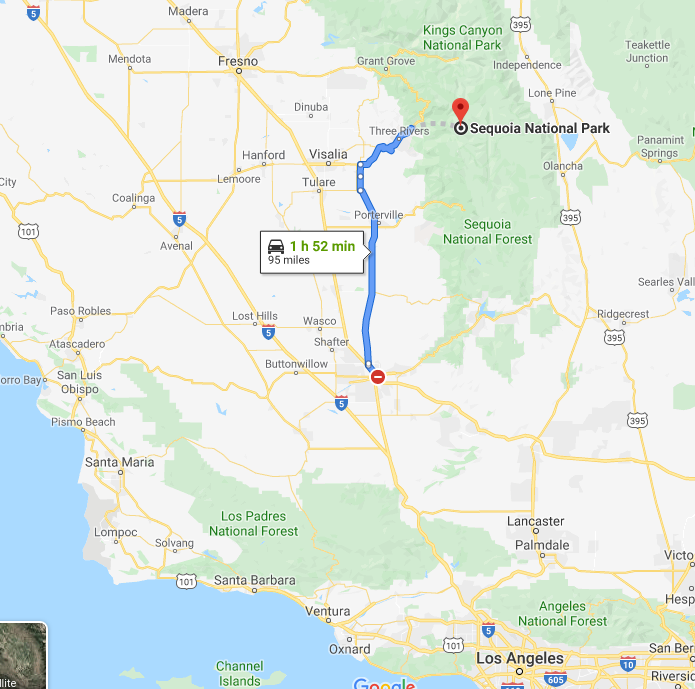 It was a bit of a drive up to the park, but that gave us lots of time to chat and catch up. It was so nice to have someone so familiar in a place so far from home. I knew we were going to have a great time.

Describing the park, puts me in a difficult situation. Neither my words nor my pictures can do it justice. The scale of the Sequoia trees is otherworldly. 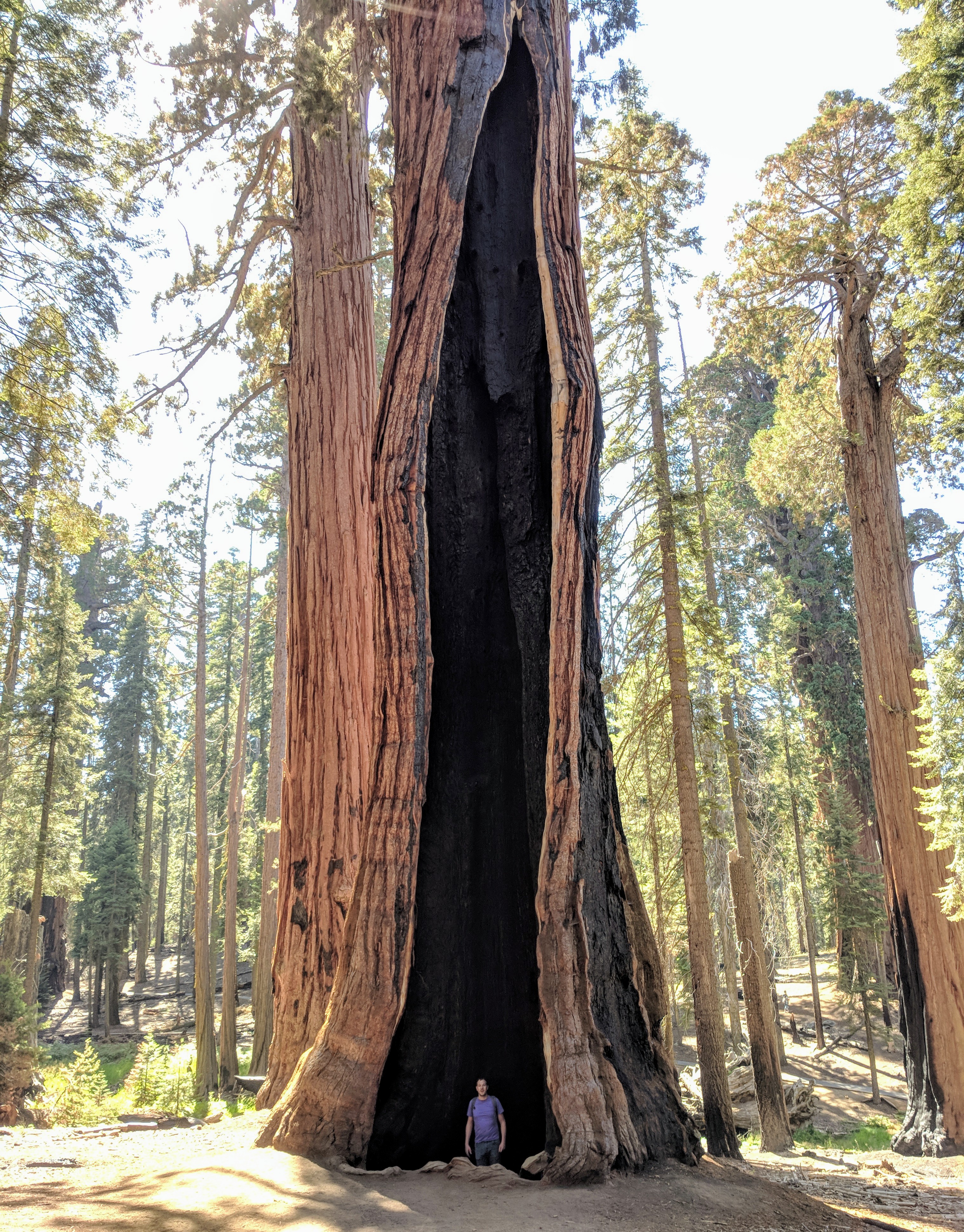 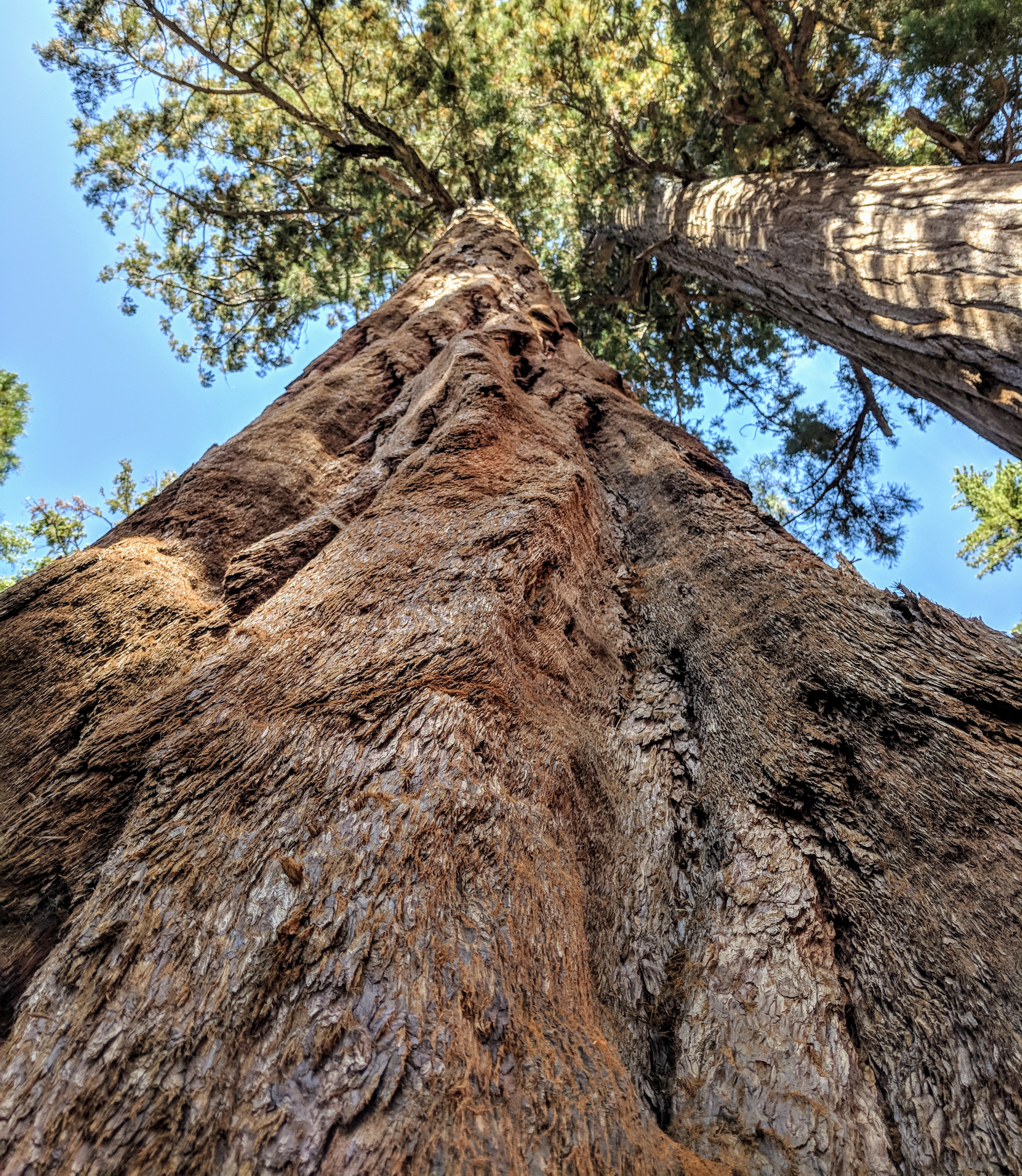 Though the park was busy, we were able to get off of the beaten path and have some trees to ourselves. 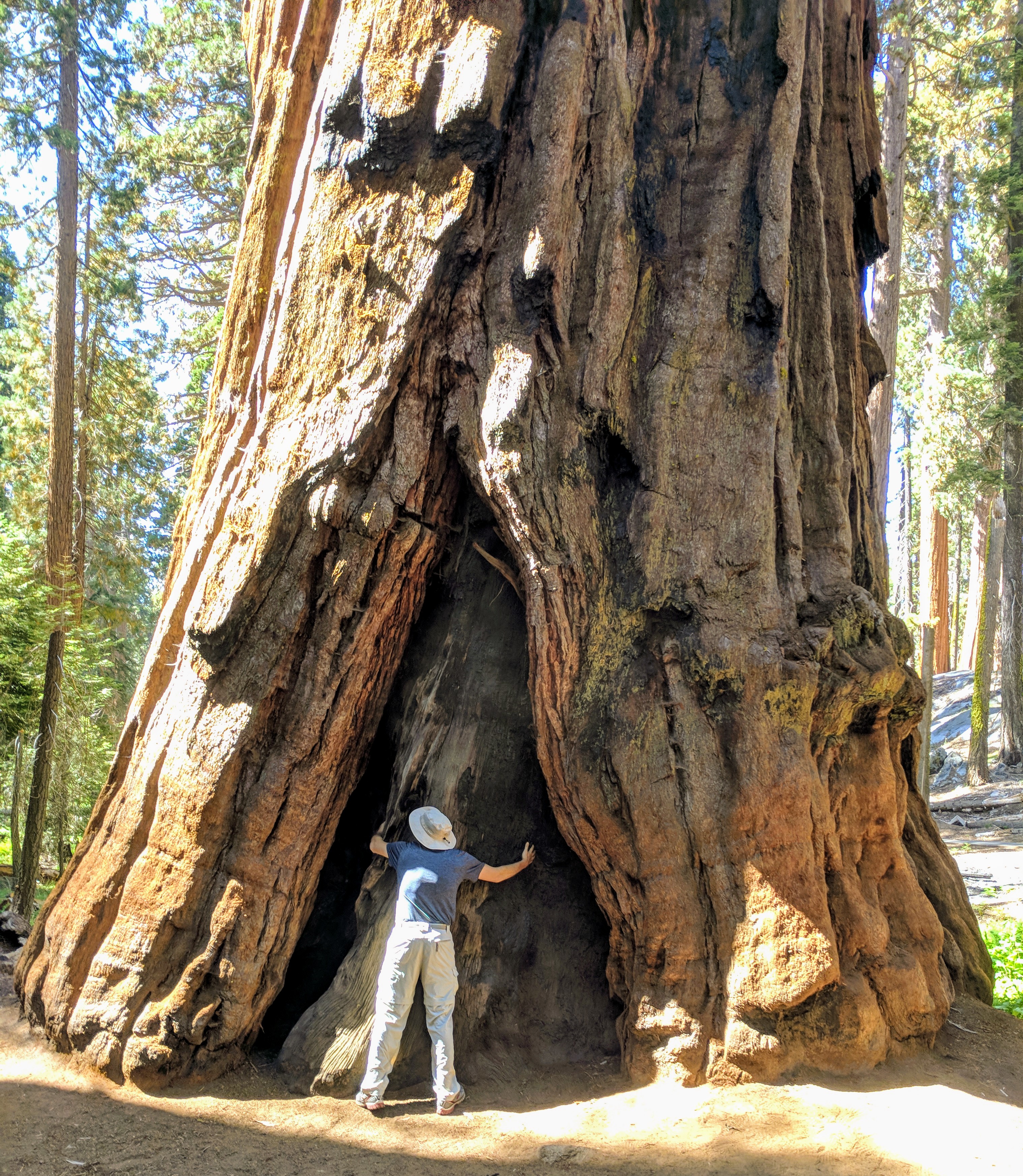 Many of them have been partially consumed by wildfires, which are common in the area. Some are hollow shells, having their centers completely burned away, but they persist in reaching for the sky. 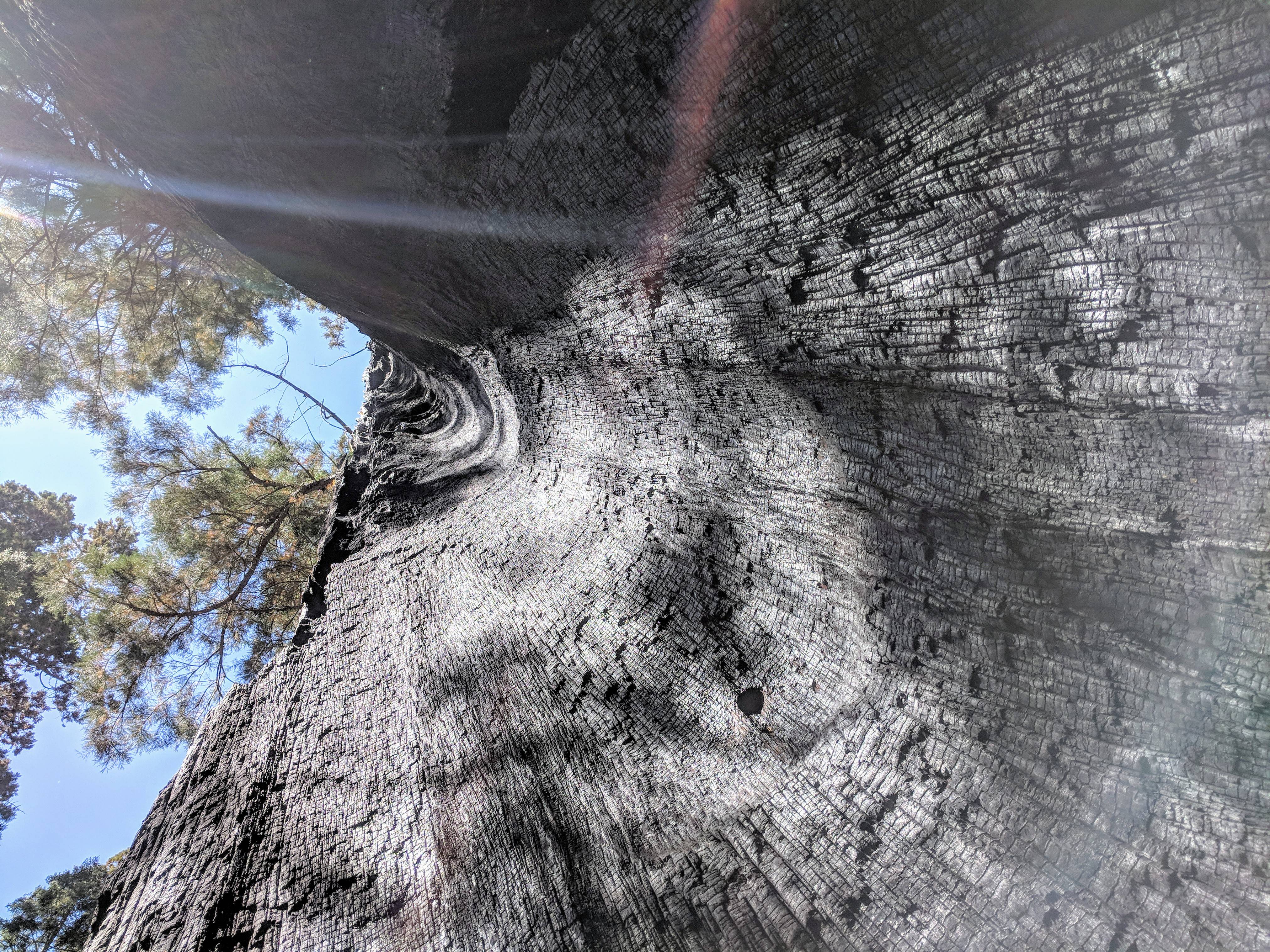 We also hiked up the the Moro Rock trail for some spectacular views of the Sierra Nevada. 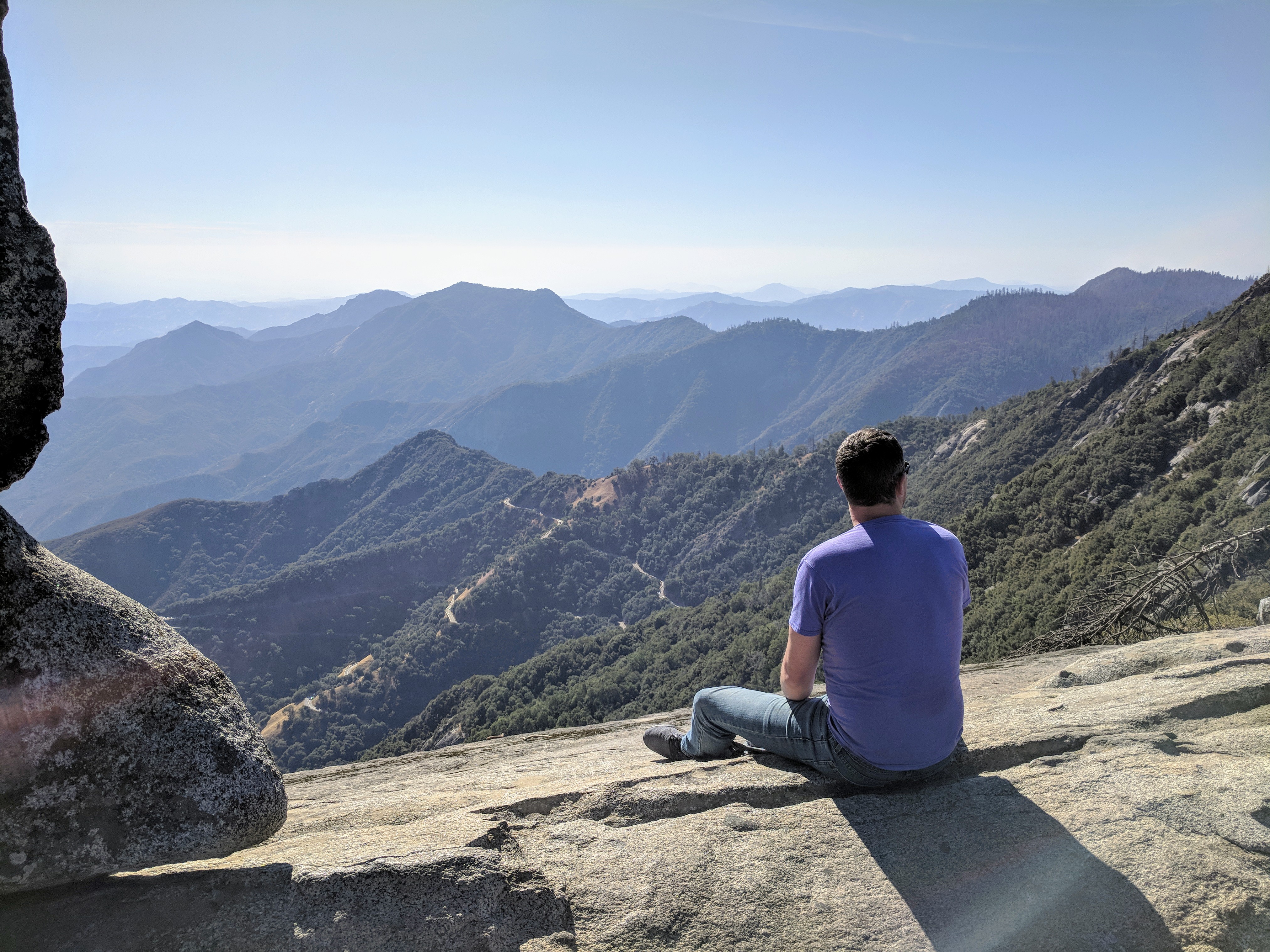 We had thought about adding another National Park to the itinerary, but Sequoia easily occupied our whole day. We returned to Bakersfield where Adam treated me to a tasty BBQ supper.

We had debated doing some more sight seeing this day, but decided to just take it easy instead. We walked around downtown a bit, where there was some sort of convention taking place. I accidentally got interviewed by a guy named Reggie who was doing a radio show. I can’t find the broadcast, but it was a nice interview. 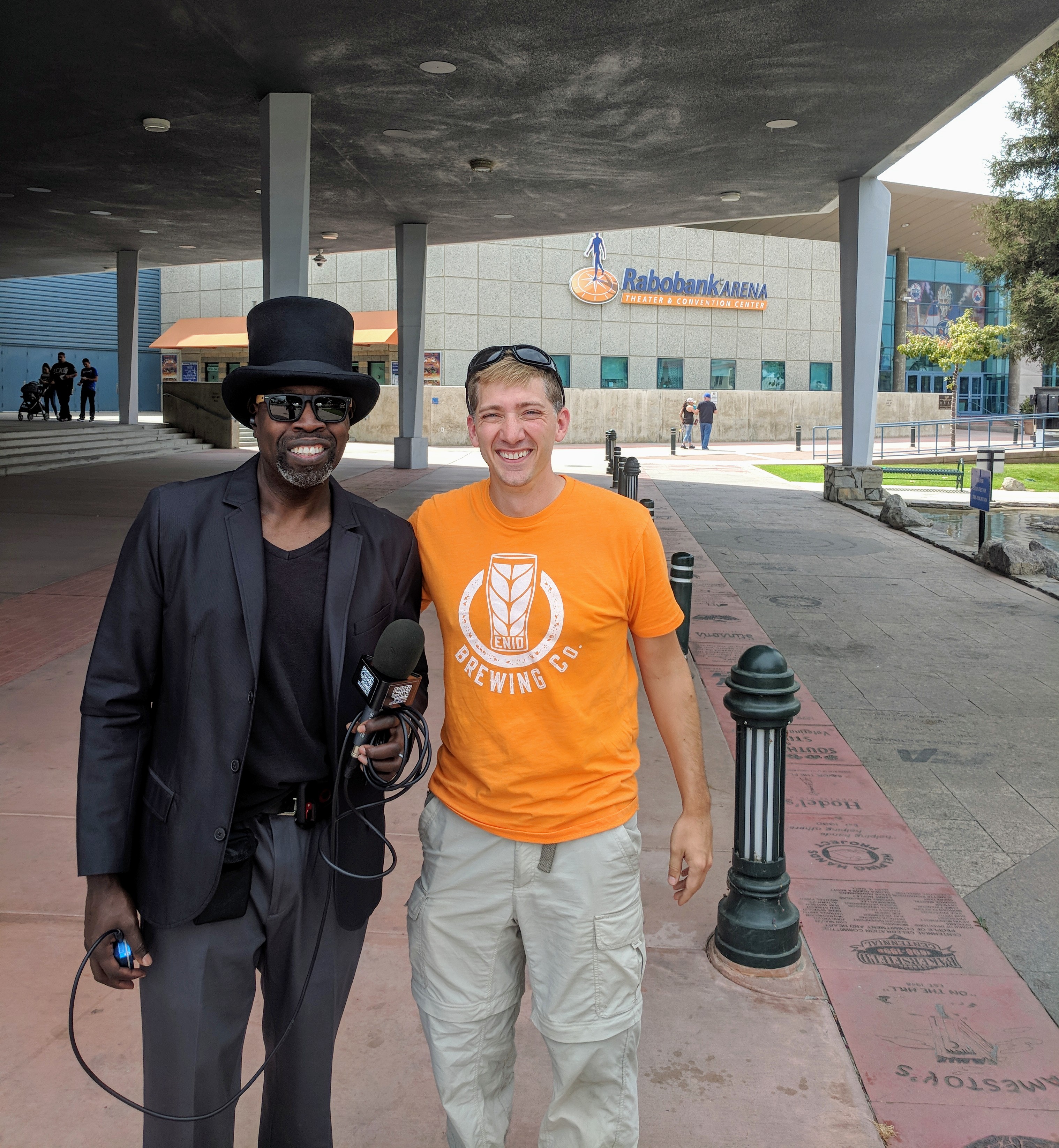 We went to a sports bar to watch the Chiefs game. Like me, Adam has been a committed Chiefs fan through good times and bad. We’ve suffered through many difficult defeats together, most recently (and perhaps most bitterly) the AFC Championship game in January. 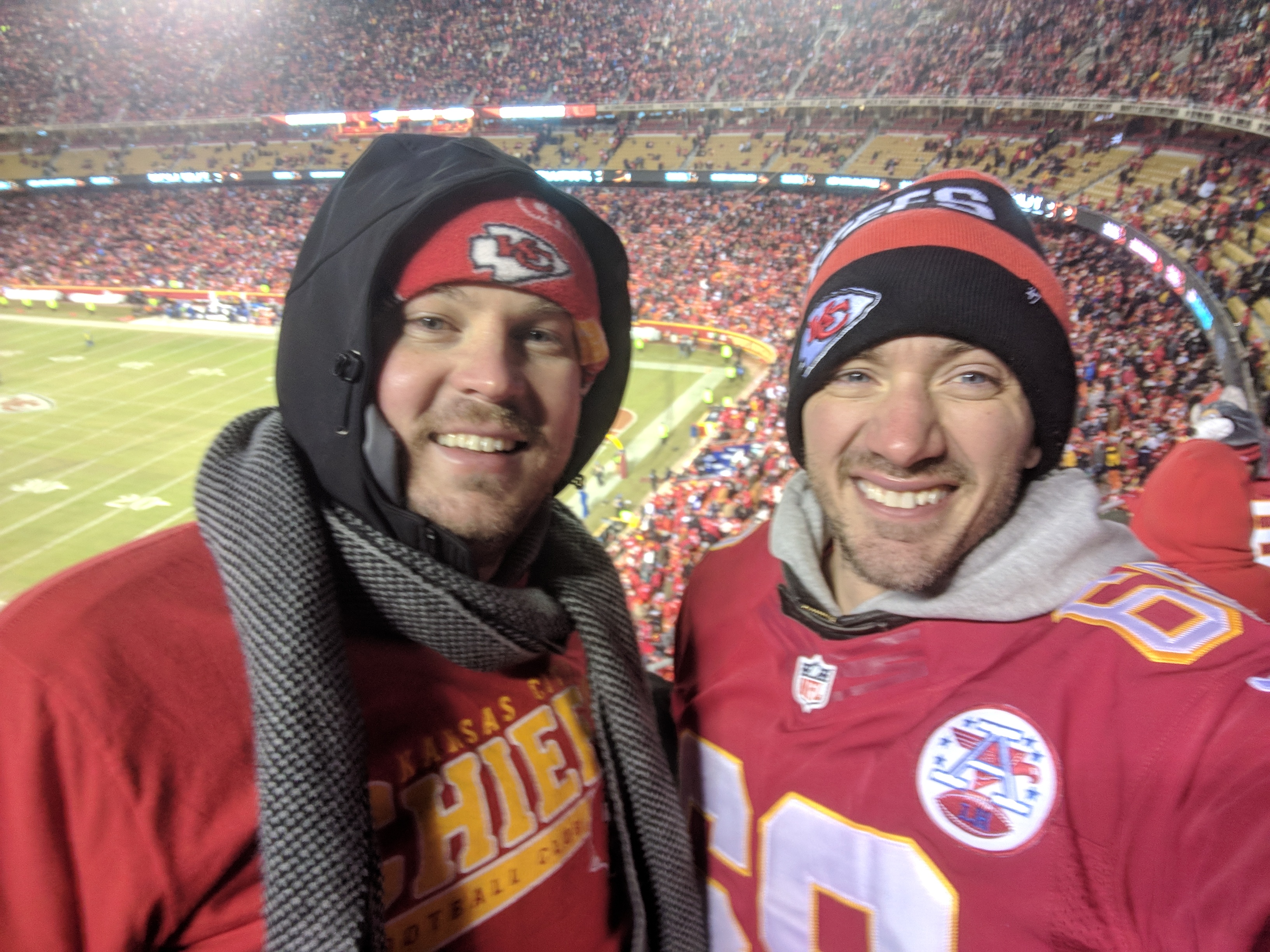 The game this day was much more pleasant. 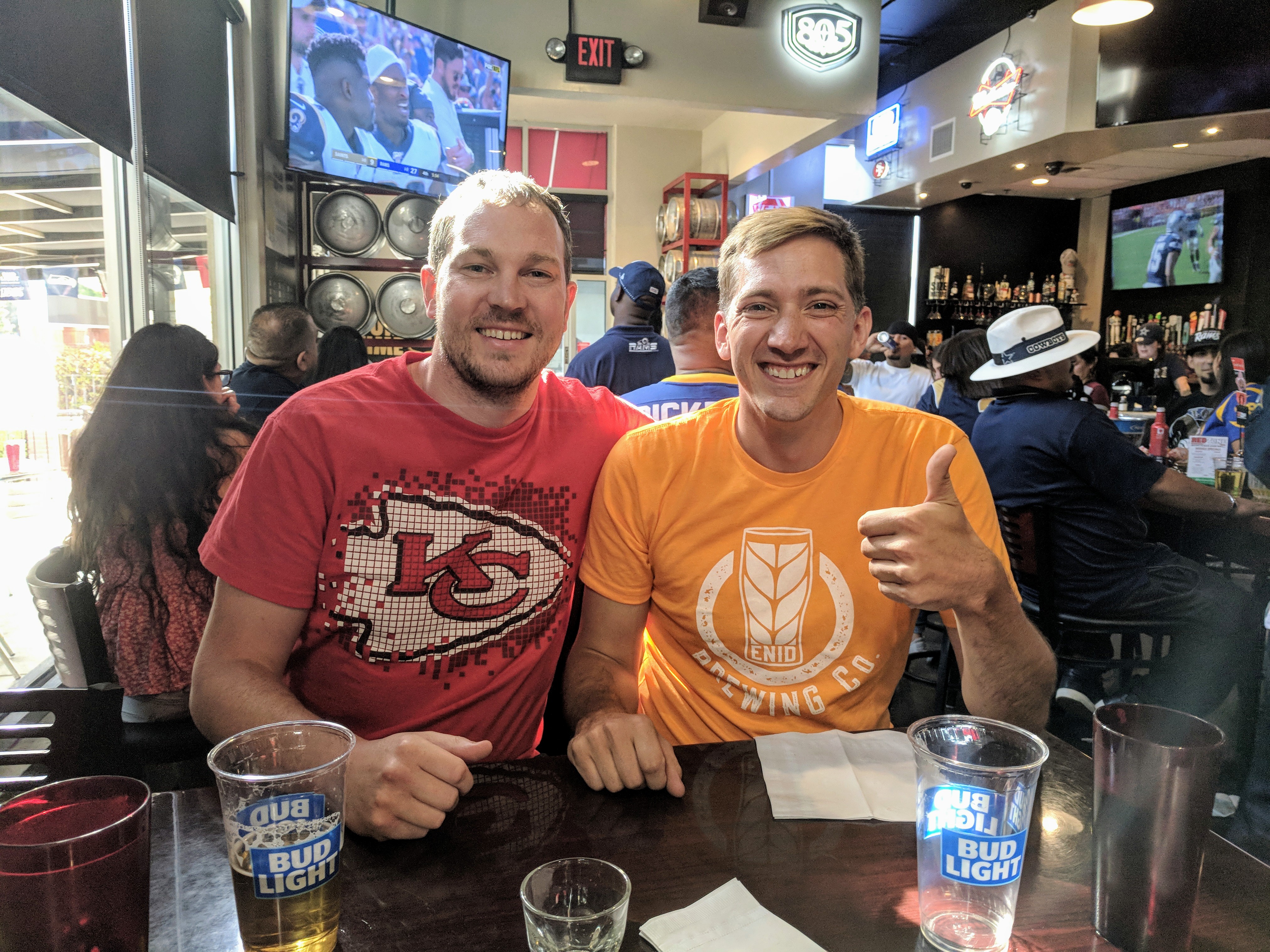 The rest of the day was calm and relaxing, which was just what I was needing. Though Adam was heading back to LA that night, he and Natalie got me a hotel room for the night. Before he left, he crossed Bakersfield off of my sign. 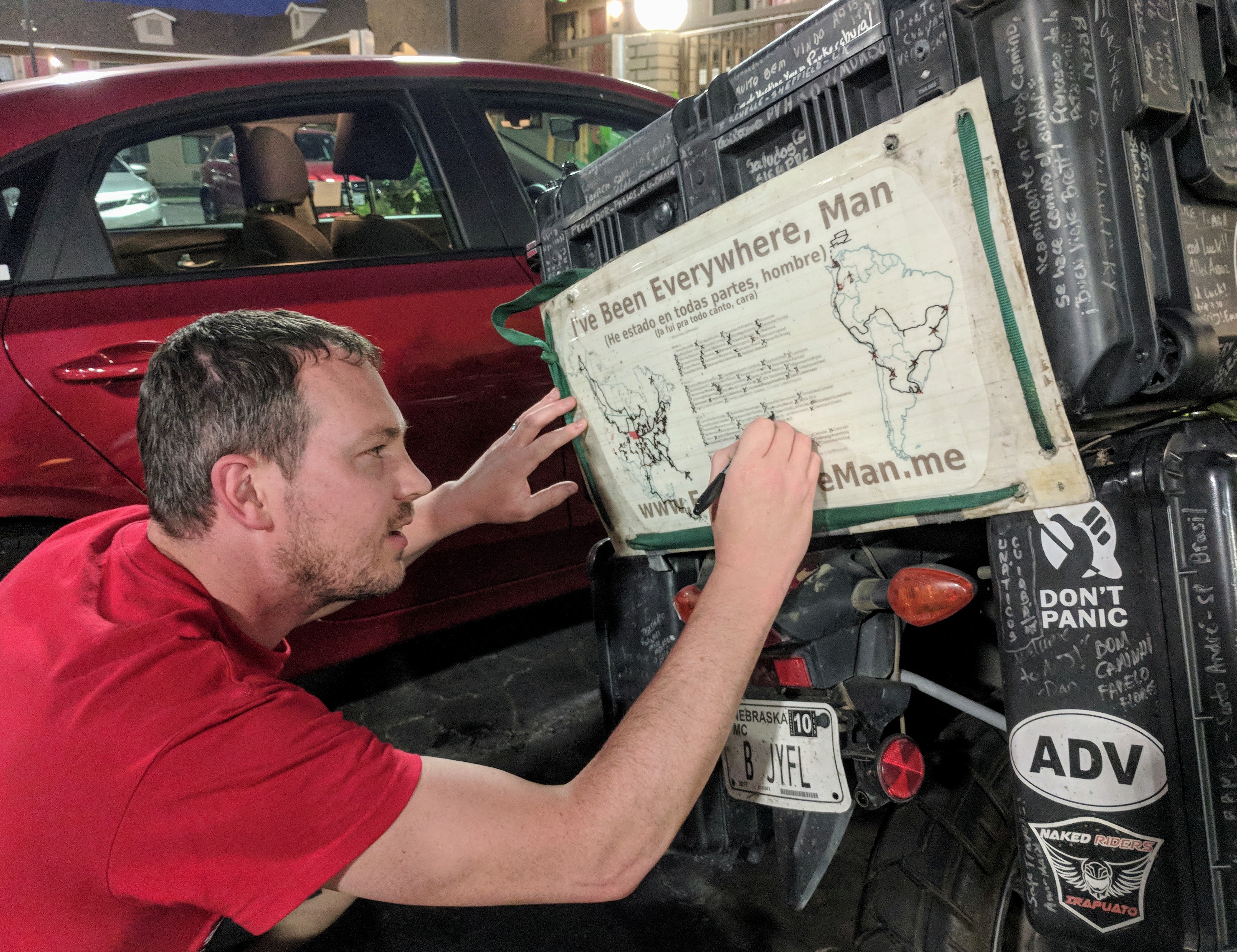 Verse 3 is definitely the hardest to complete of the whole song. It features the two most remote and hard to access locations, Schefferville and Ombabika. It includes a Central America location, Costa Rica, as well as two in South America, Argentina and Diamantina, Brazil. With the completion of Bakersfield, Verse 3 had officially been finished. It was great to reach such a milestone with such a good friend.

This weekend was a definite bright spot amidst a difficult portion of this trip. I know that Adam and I will long recount memories that we made during this special time together. Inland California seemed a bit more palatable for me and there were still more experiences to be had in the state.

Keep reaching for the sky, everybody

7 thoughts on “Fields and Trees”