Last one! I promise! The sunrise changes everything…..

I was like a coiled spring, ready to pop. As soon as light was available, my swift tour of Schefferville would begin. I set up my tripod and unpacked Sonic and Annie’s windscreen. I mounted my phone, camera aimed at the Schefferville airport sign and waited. 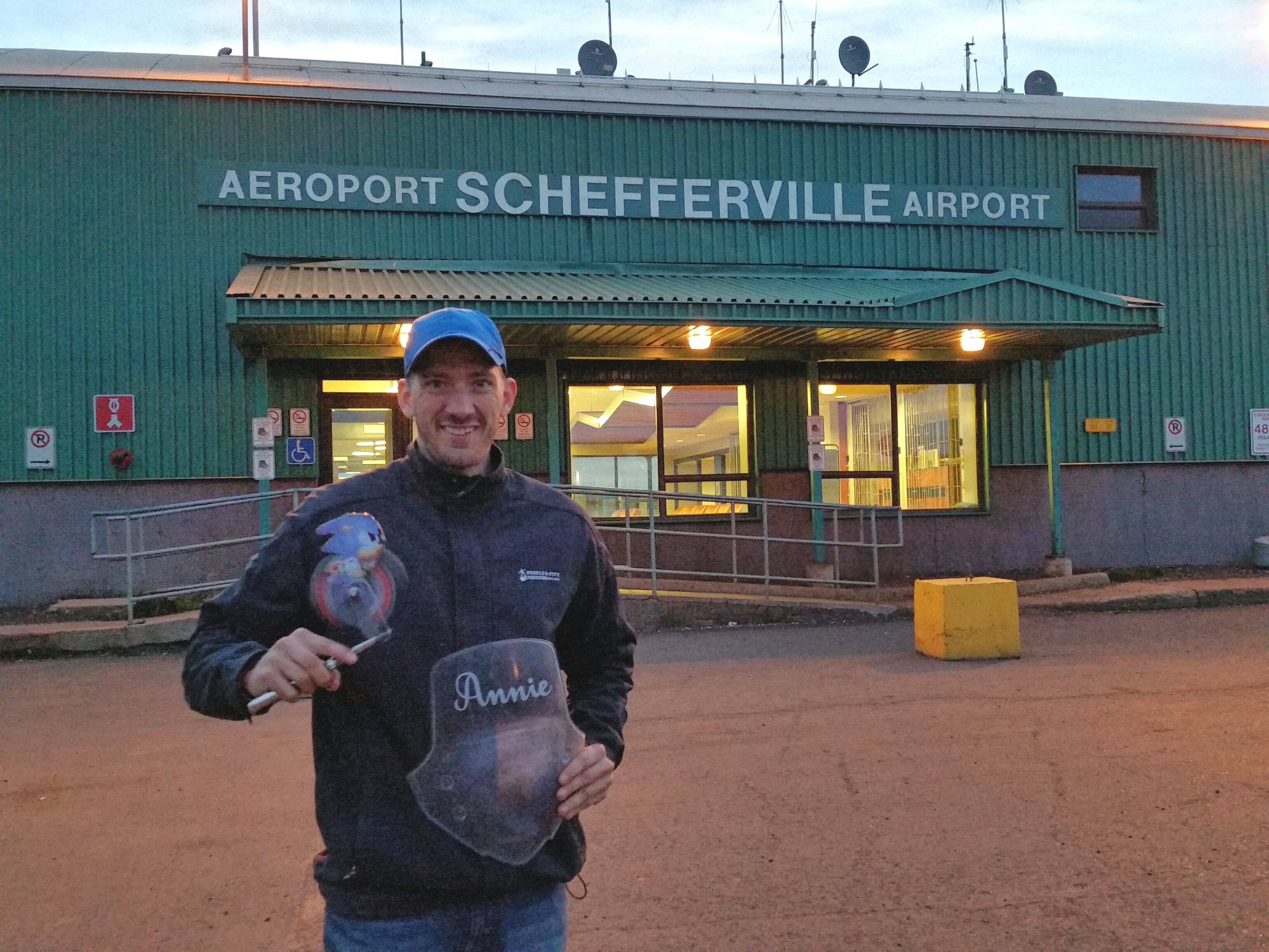 I’ve had dreams about this exact picture. Would it be ridiculous to say it is one of my most prized possessions?

I loaded up and headed west, tripod slung over my shoulder. I wasn’t running, but I was moving briskly. There was a sculpture that I wanted a picture of. I had no idea where it was, but figured it would be back towards the other side of town. If nothing else, there were businesses there where I could ask somebody.

Fortuitously, I ran right into. It sits across from the Schefferville post office. As soon as I saw it, I couldn’t keep from laughing. You’ll see why in a second. 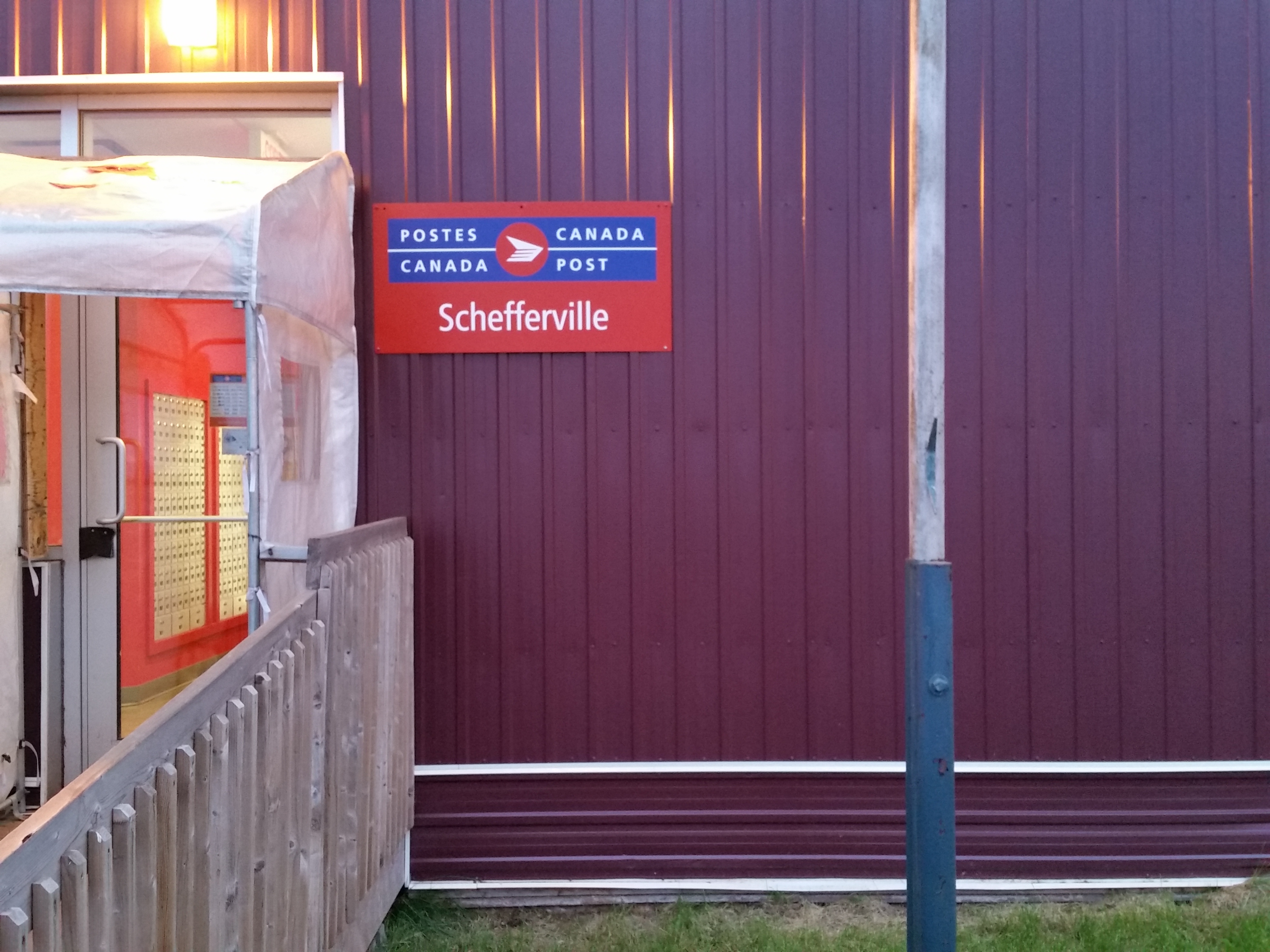 I thought I would have a perfect shot in a few minutes, so I marched through some brush to get a shot across the lake. 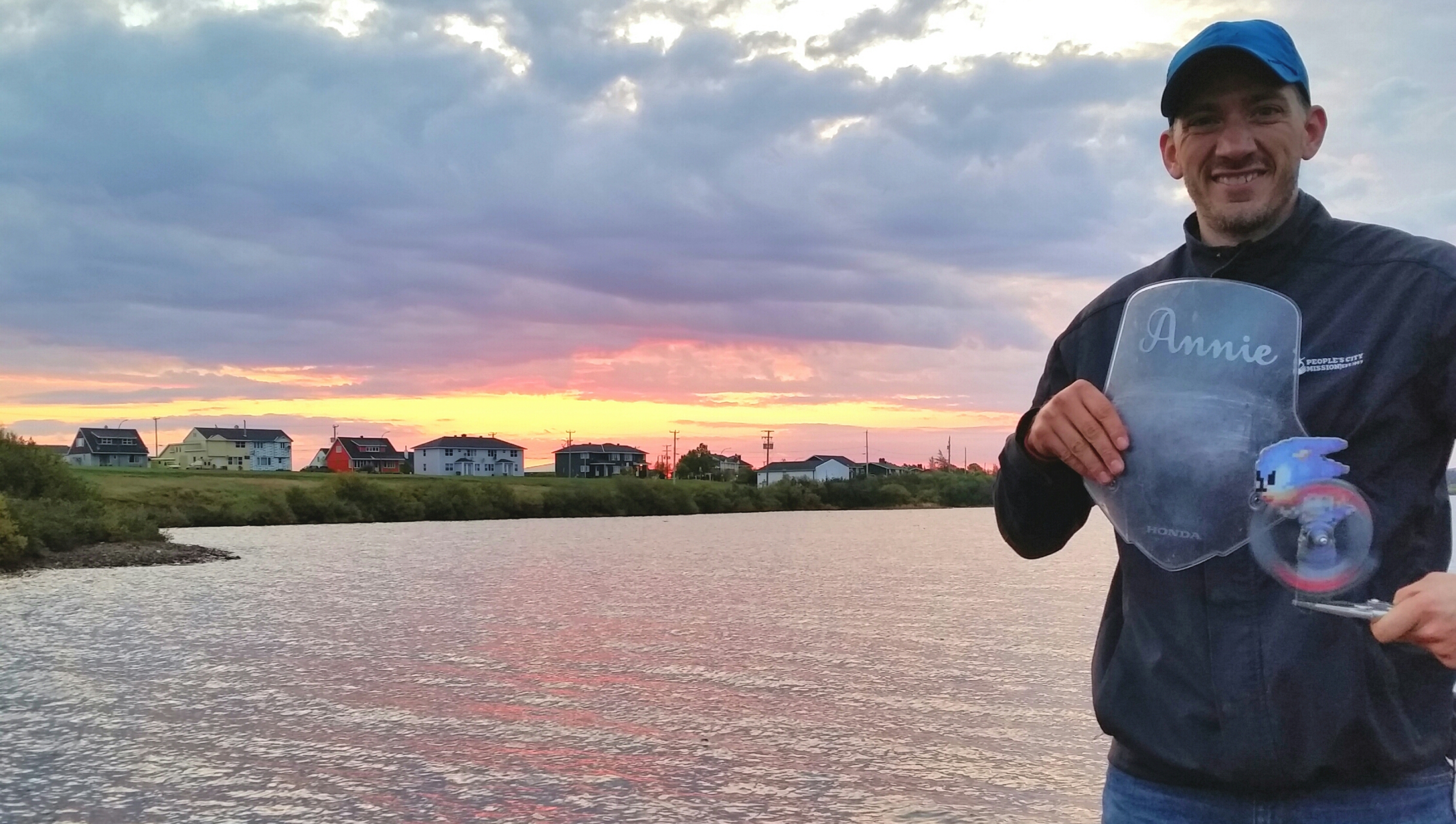 The statue is a figure welded together from old mining parts. My Newfoundland friends from the train, when describing it to me, chuckled and said it was “anatomically correct.” That is an apt description. I would maybe add that it is definitely not “gender neutral”. 🙂

This picture could be considered mildly offensive, so I will link it rather than embed. CLICK HERE TO SEE THE SMUT.

(I can’t believe you clicked on that, Mom. Have some decency!)

For my “official” picture, I chose angles that were a little more (or less, perhaps?) flattering. 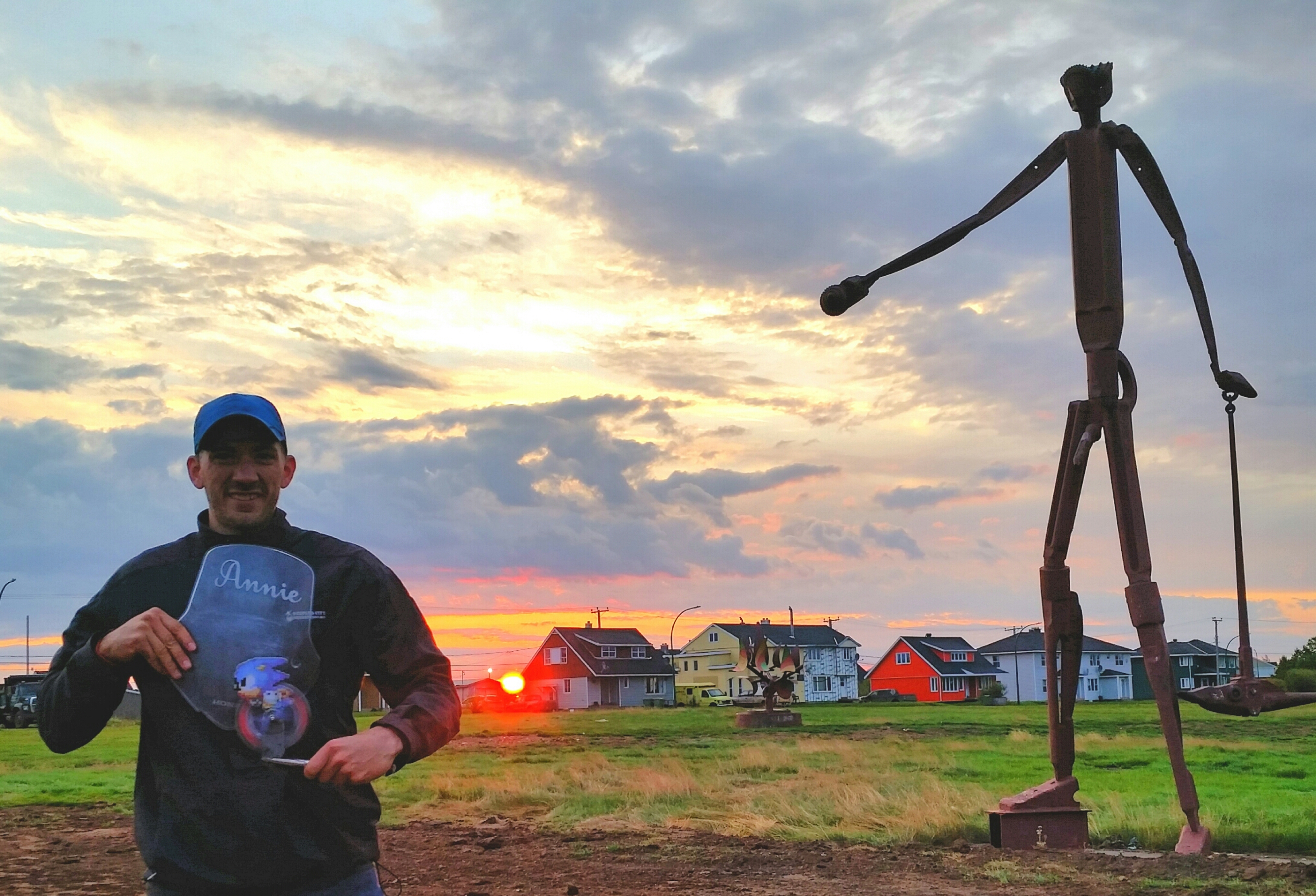 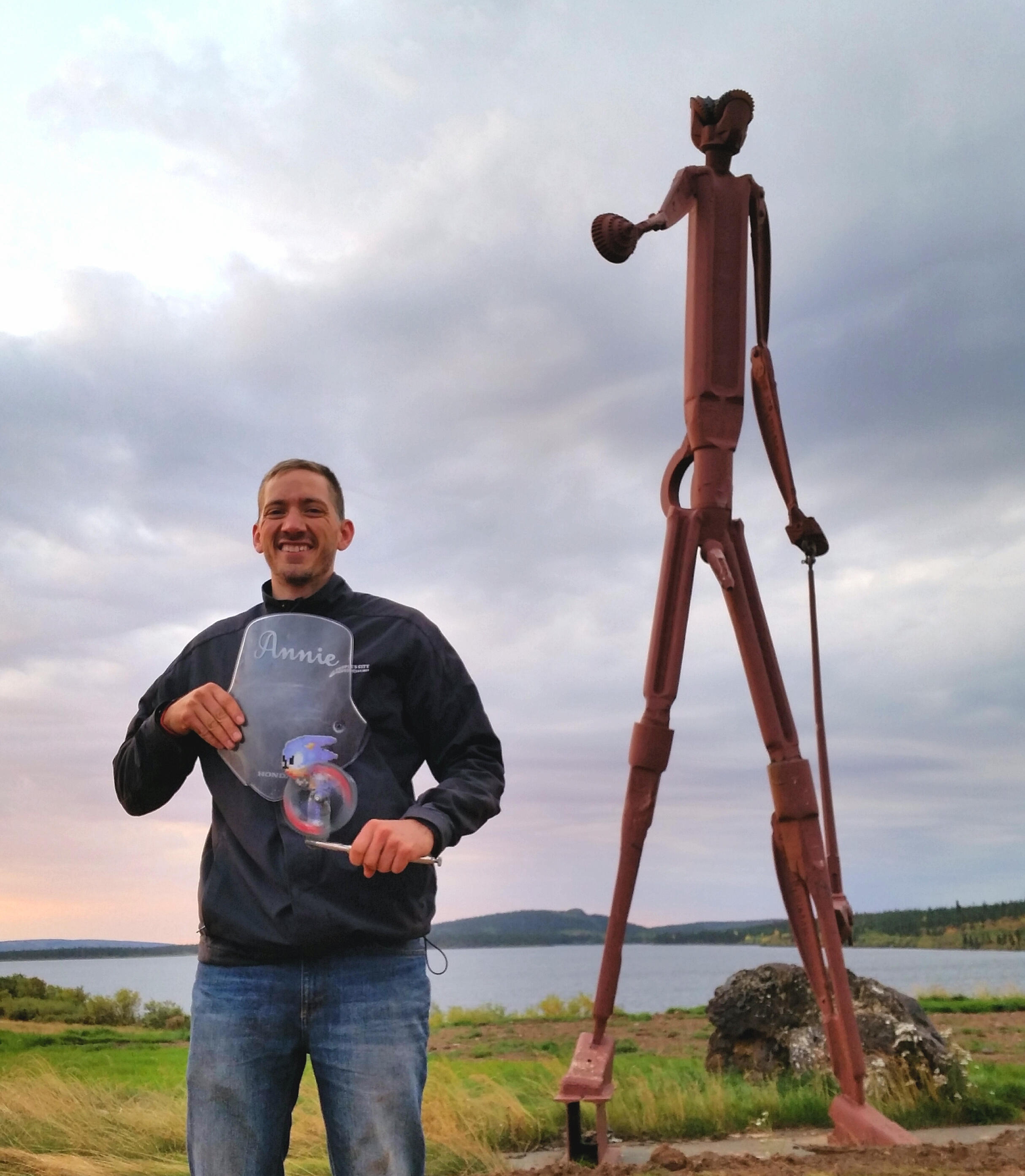 There was another sculpture (this one completely genetalia-free!) which looked awesome with the backdrop of the sunrise.

(picture at top of article)

It was not even 6am and I already had a plethora of options to serve as my Schefferville picture. Awesome!

I thought a staging with this miniature train by the hotel would be neat. 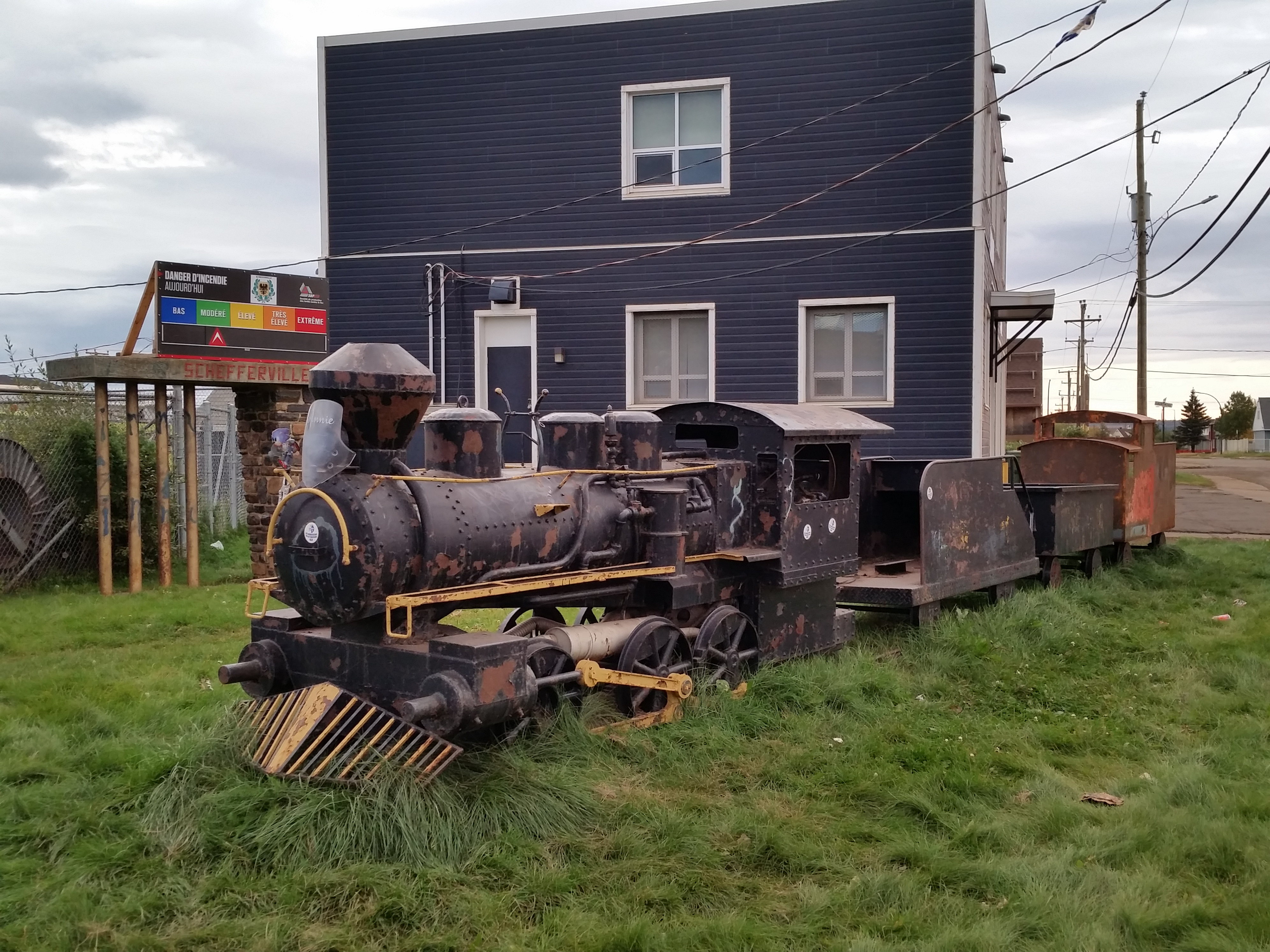 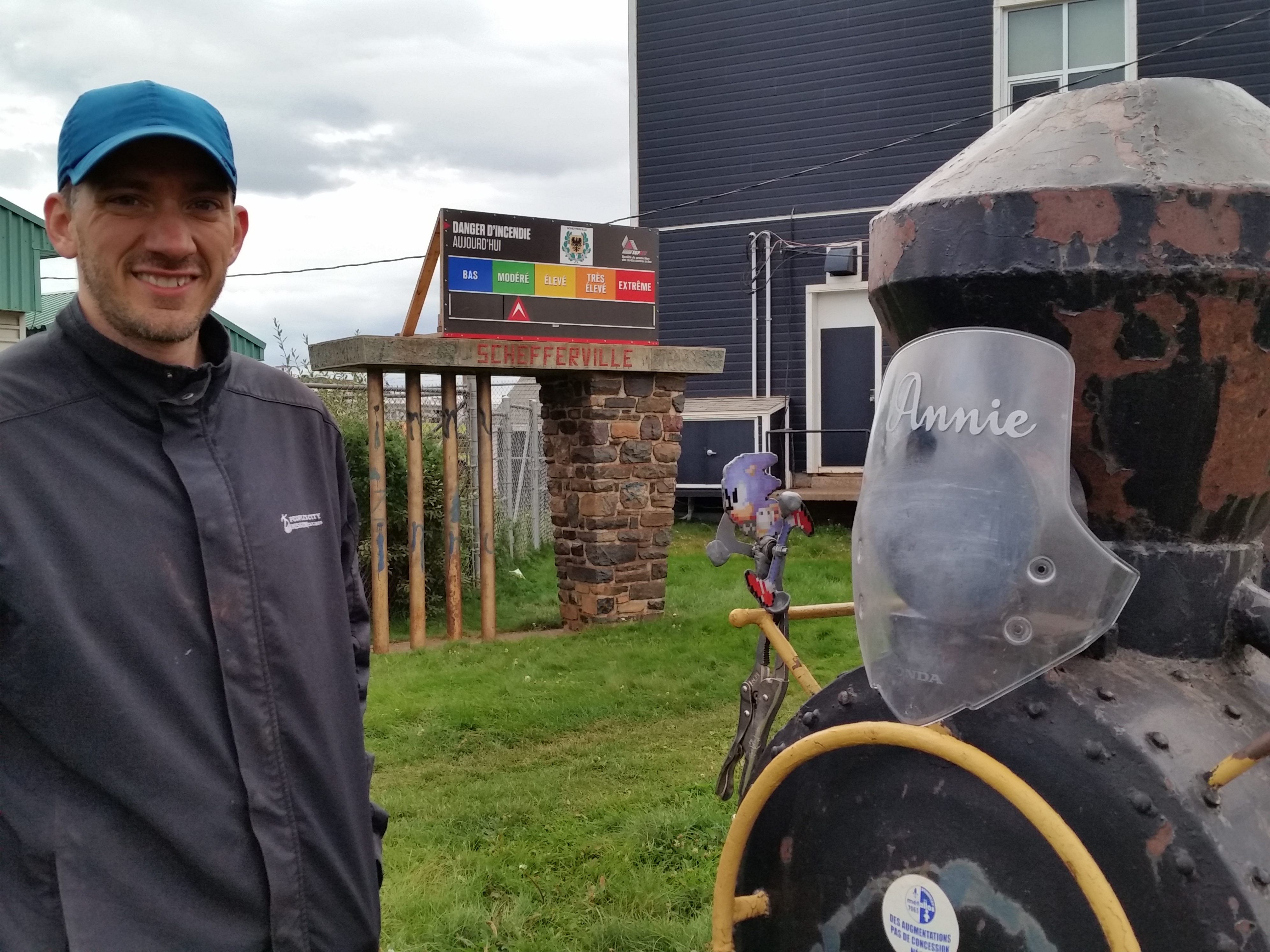 Am I done with Schefferville? I don’t think there’s anything left to see.

Time to celebrate with a warm cup of joe. I walked back to Bla Bla’s restaurant, being the only customer in the dining area when I arrived. 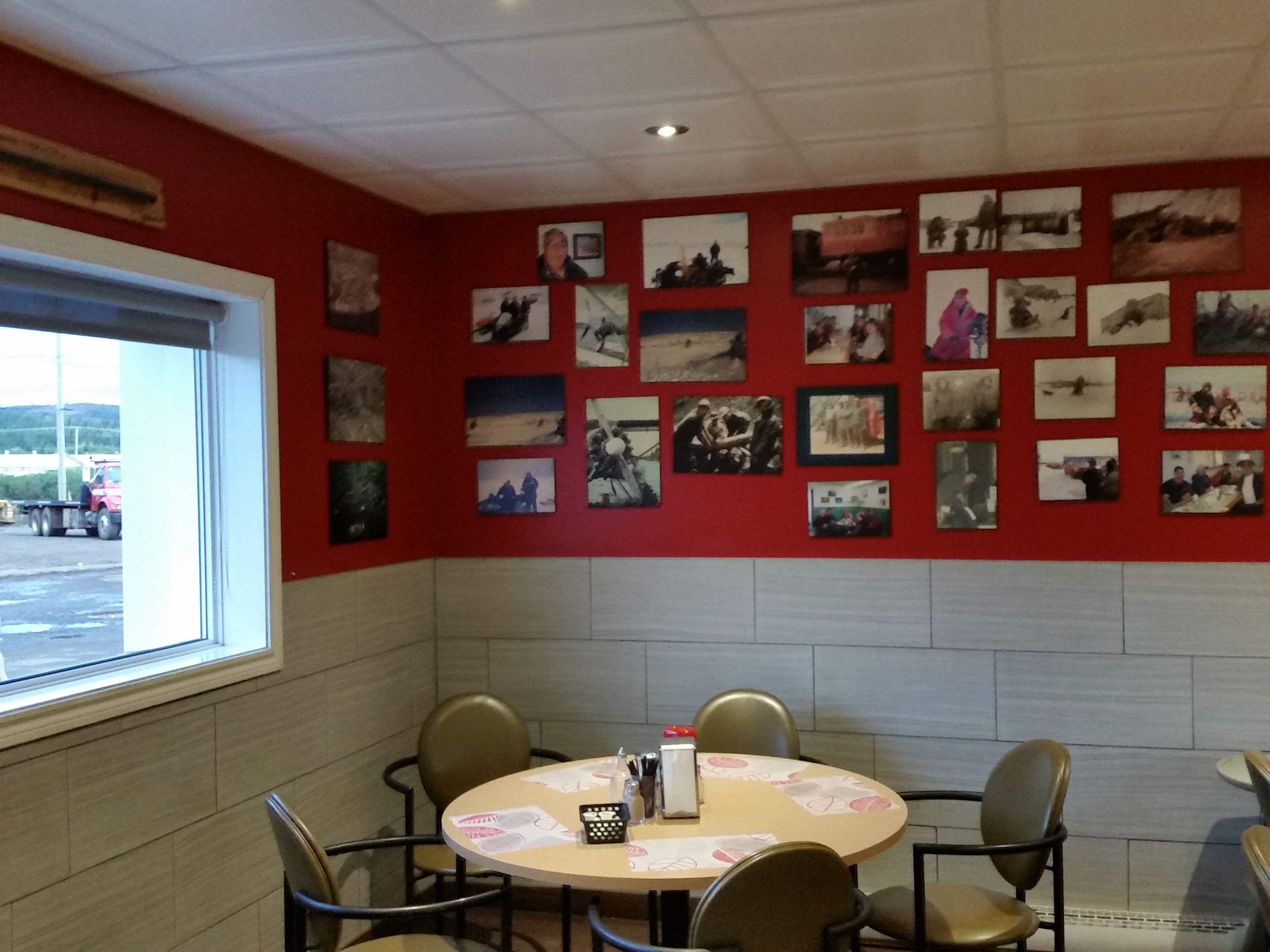 Having neglected to do so the previous night, I asked my hostess about the origin of the unique name of the establishment. She answered in a thick French accent, “You know the French people come and they talk, talk too much…like bla bla bla….”   🙂

They had lots of neat Schefferville images on the walls: 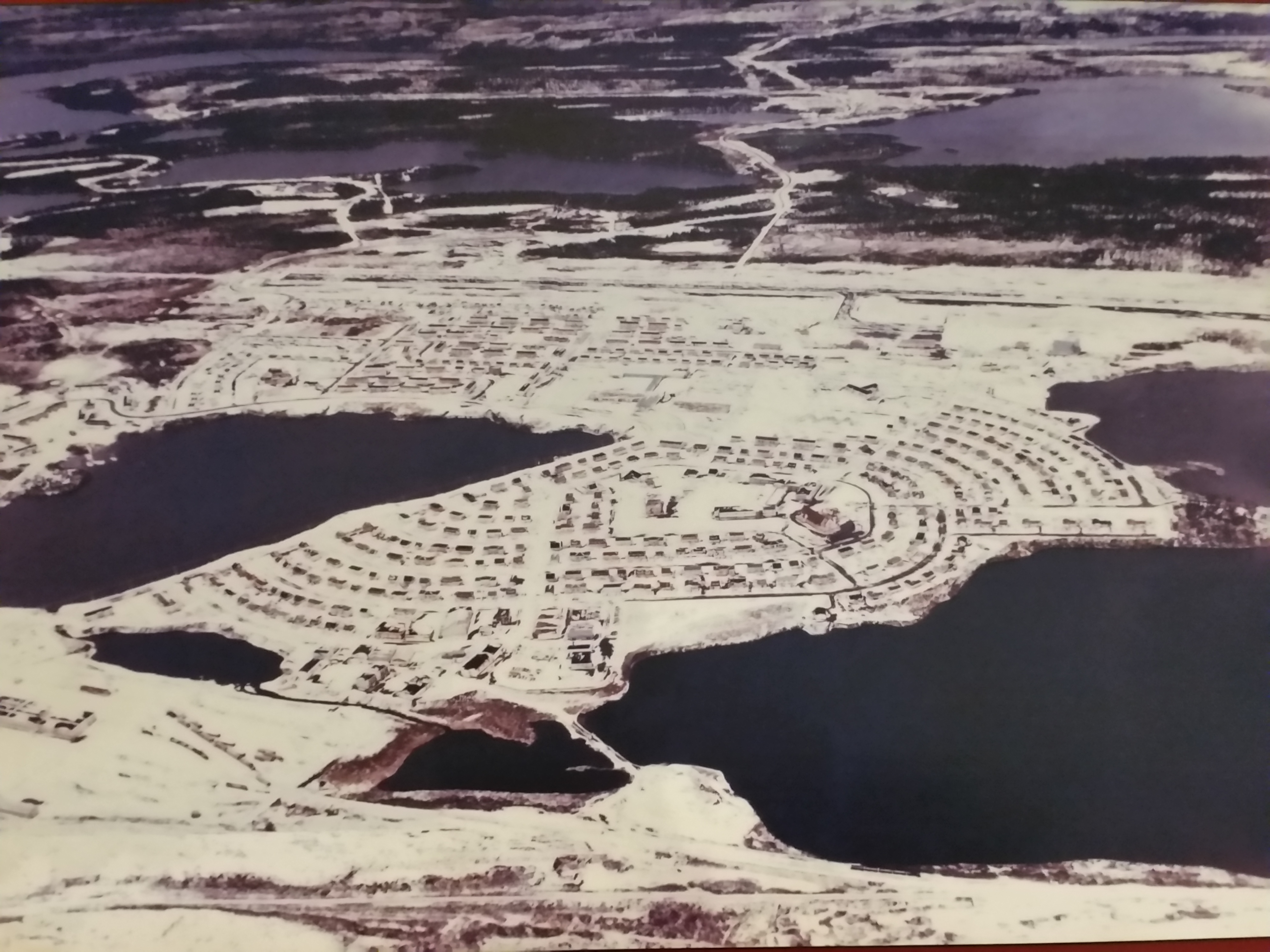 The wifi was semi-operational, allowing me to send a message to my parents and my Labrador hosts, letting them know that I had lasted the night. I normally take my coffee black, but I loaded my disposable cup with cream and sugar. This was a cup of celebration!

The sun had changed my perception of this place. I was almost reluctant to leave, but knew my train was waiting. There were still so many people to meet, stories to hear and bears to wrestle; but those would have to wait…….Next trip!

I began my march west. While doing so, I glanced through the houses to where my sheltering school bus had been parked. The other bus, the one I had not chosen, still hadn’t moved. 🙂
Just as I reached the edge of town, a compact SUV pulled up. From the passenger window, a gentleman asked (in French) if I needed a ride to the train station. Seeing the expression of American ignorance grace my countenance (I’m an expert at this look by now), he switched to English. He directed me to board on the rear driver’s side. A large husky seemed reluctant at first to make room for me. He begrudgingly hopped onto the other rear seat passengers lap.

This couple and their two dogs were riding the train down to inquire about a position as a P.E. teacher at an English speaking Native village down the line. They both seemed cautiously hopeful that he would get the job. My story gave them a good laugh and caused them to shake their heads.

Before boarding I paid my fare, this time at the station. For some reason it was $6 cheaper this time ($36 CAD). I didn’t ask why. My new French speaking friends began to tell my story to some people in the station (I could pick out “Johnny Cash” and “chanson”, the French word for “song”), including My Buddy (the train worker who had been helpful to me).

Perspective is a funny thing, right? Here I was, at the northeast terminus of my journey, feeling like a mixture of Leif Erikson and Ernest Shackleton. But I was surrounded by people who were just having a normal day. I wondered how these people would feel if they were plopped down at the train station in Lincoln, Nebraska at 8:35pm on a Monday night. Would it feel as foreign to them as Schefferville had felt to me? Hard to say.

As the train chugged away from my toughest location it began to rain. I didn’t even have to put on my rain suit! It was awesome! I didn’t sleep, but kind of zoned out. I could hardly believe I had been to Schefferville. 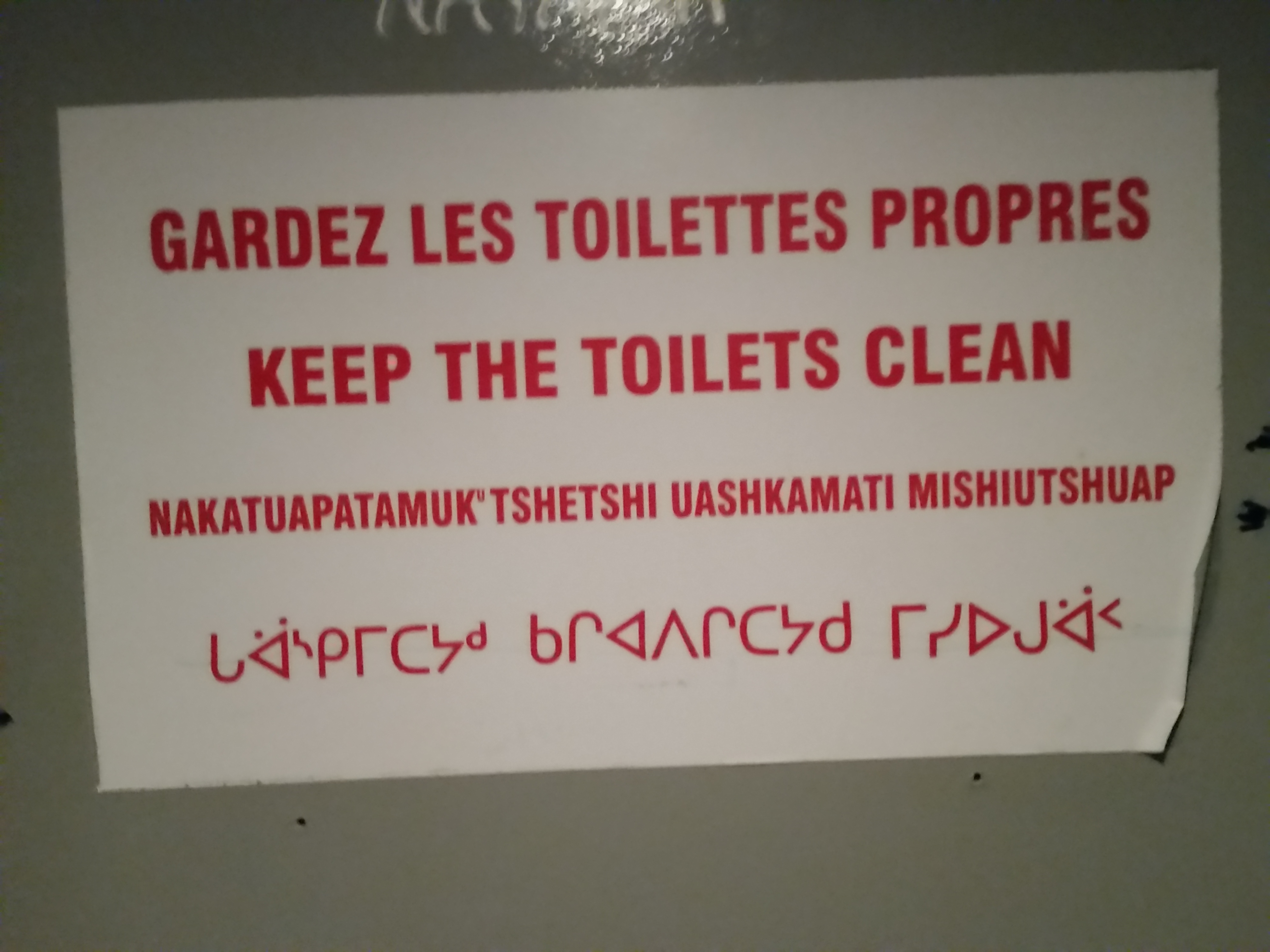 The train made decent time, arriving at Emeril Junction in around 4 hours. Gord and Bev were waiting and ready for me. Seeing them was a relief.

They were the first people to hear the school bus story. I think they enjoyed it.

Back at home it was time for the signing ceremony. A part of me wanted to personally cross Schefferville off of my sign, but that would NOT have been right. With all that Bev and Gord contributed to this accomplishment, it was only fitting that they have the honor. 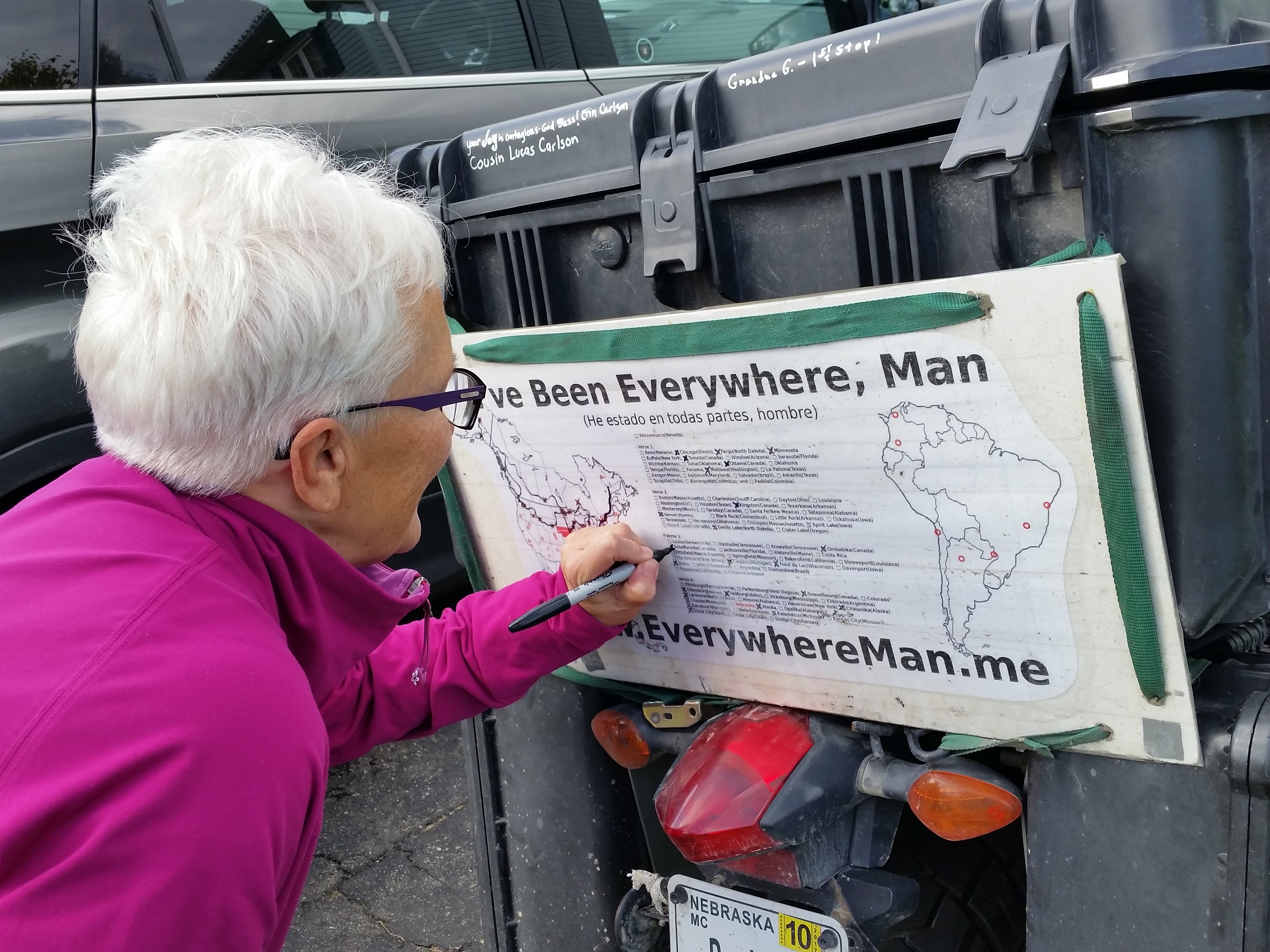 Gord got the map: 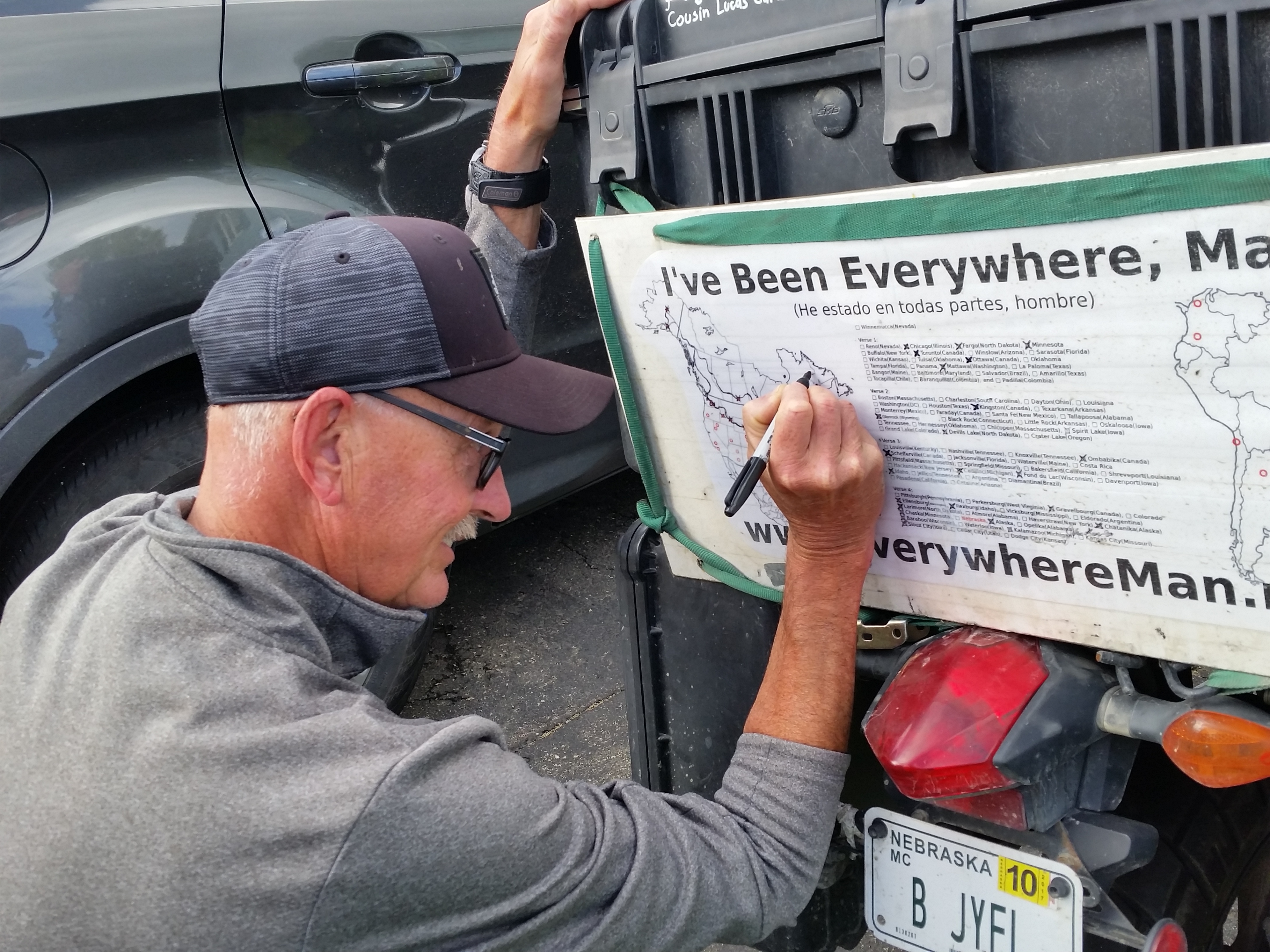 Their daughter, Kim, took a nice photo of me and my hosts: 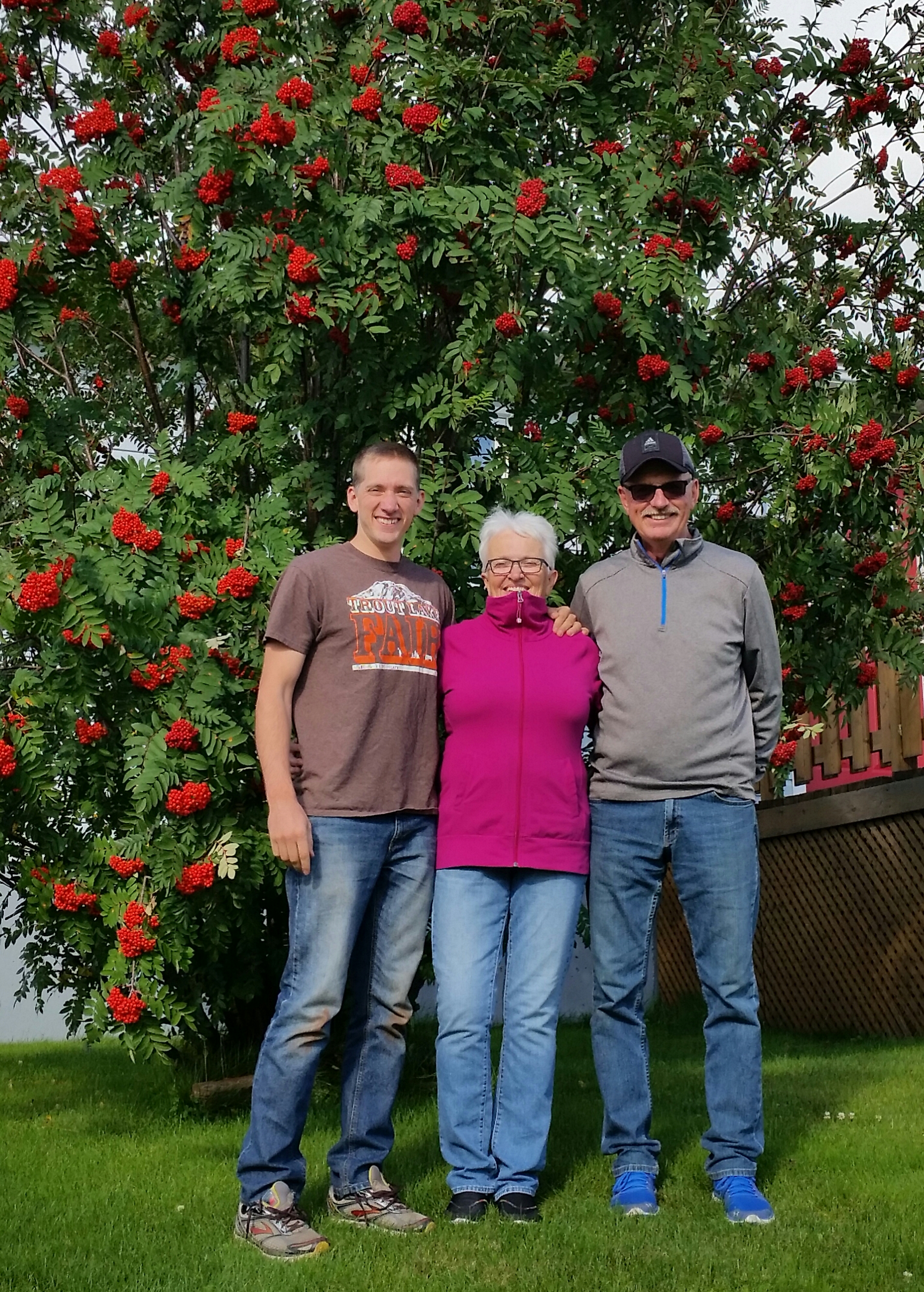 We had another wonderful supper and were joined by Kim and her boyfriend, Chris. As they were around each other, the accents got thicker and the stories got better. I really enjoyed being a part of it. At one point it almost felt like I was in some alternate universe where this was my family, I was a Labradorian, I did speak with a silly accent. (Sorry, couldn’t resist.) That’s how welcome I felt.

I already slipped up once in this post and typed the phrase “I have been to Schefferville.” This is an absolute misnomer and I will try to not repeat the mistake. So many people are a part of this completion: From those that physically took me to the station, to someone who said a silent prayer for my safety. There is no “I” in Schefferville…wait…there is no “I” in train…..no that doesn’t work either…..

There is no “I” in Everywhere!

Instead I will now type with conviction, keys clacking from full force strokes:

WE HAVE BEEN TO

WE HAVE BEEN TO SCHEFFERVILLE!!!!!!

Realtime update: I’m not sure which was harder: Getting to Schefferville, or writing about the experience. I hope I haven’t drowned you all in text. I wasn’t real happy with the writing in the first few posts of this loop, but I feel like this experience has gotten my writing back on track. Fear not, there are still plenty parsimonious presentations pending. This journey continues to surprise. I’m back in the US now, so I will hopefully be updating more regularly.

10 thoughts on “Sights on Schefferville, Part 5”