Remember when this blog used to be about me visiting places in the song? Yeah, me neither. Let’s see if we can all refresh our memories by checking off Bangor and Waterville.

Ok. Before we get going here, can we all just take a moment to recognize the indomitable force of nature that is my mother, Betty Anderson? This woman can do more with an hour or a dollar than anyone I’ve ever met. I’m actually a bit concerned that someday we will find out that she is actually a well organized army of clones. 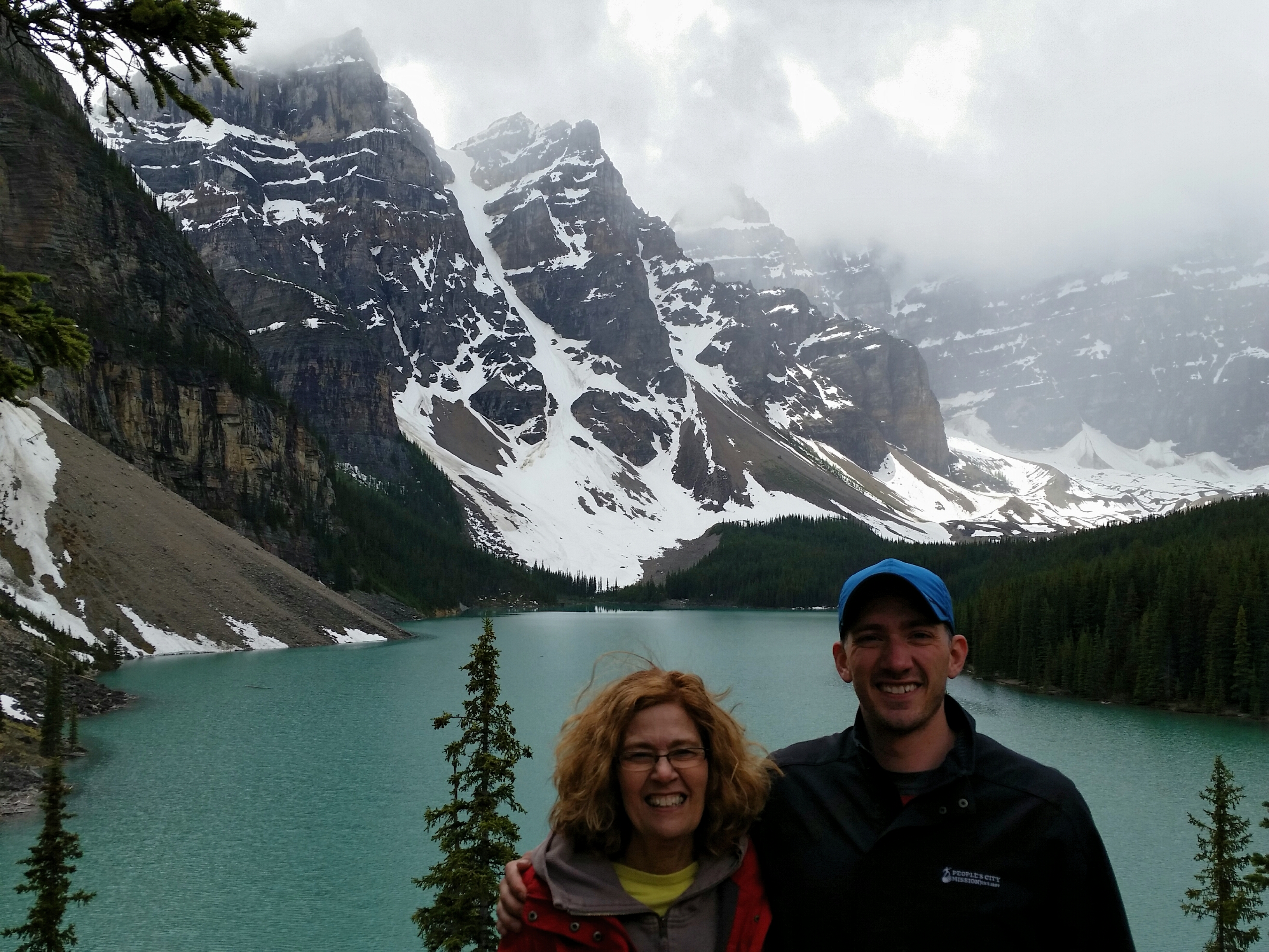 If she was the one on this trip, it would probably be done already, she would have multiple volumes published on the experience, she would have learned to speak Swahili while on the trip (just for fun) and she would have a rug made from the skin of a certain Idaho bear arranged neatly on her living room floor.

One of the things she has done during my trip is send me these pictures of hand-written notes of possible things to see in my path. Thanks for these, Mom. You really can do it all. 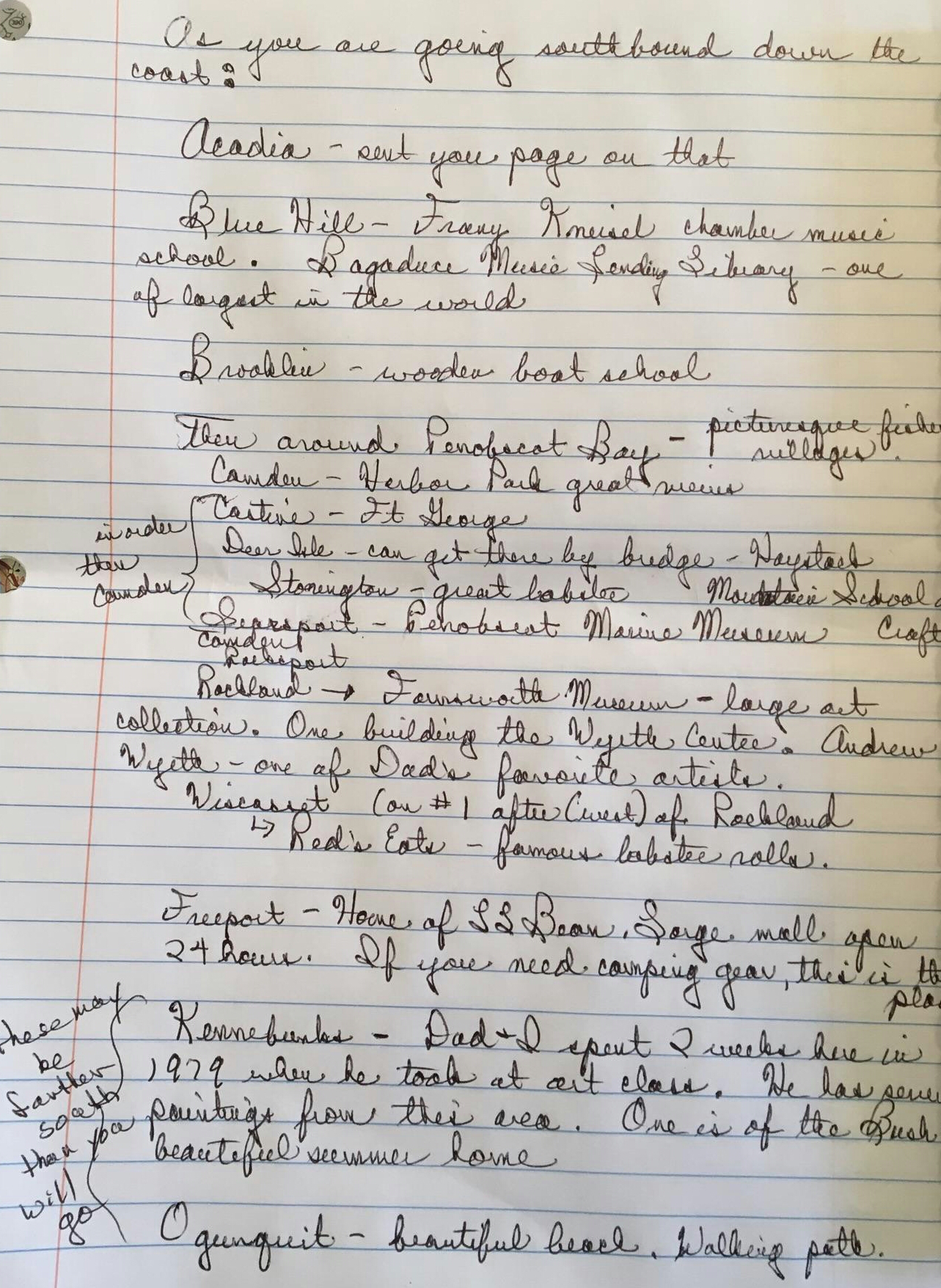 One of the recommended stops on my list was Stonington, ME, which was also recommended by my disc golf friends the previous evening. That was my first target for the day.

My gracious host, Mark, signed Annie and invited me to camp on the course for another night if needed. I wasn’t sure what the day held, so I told him I would be in touch. 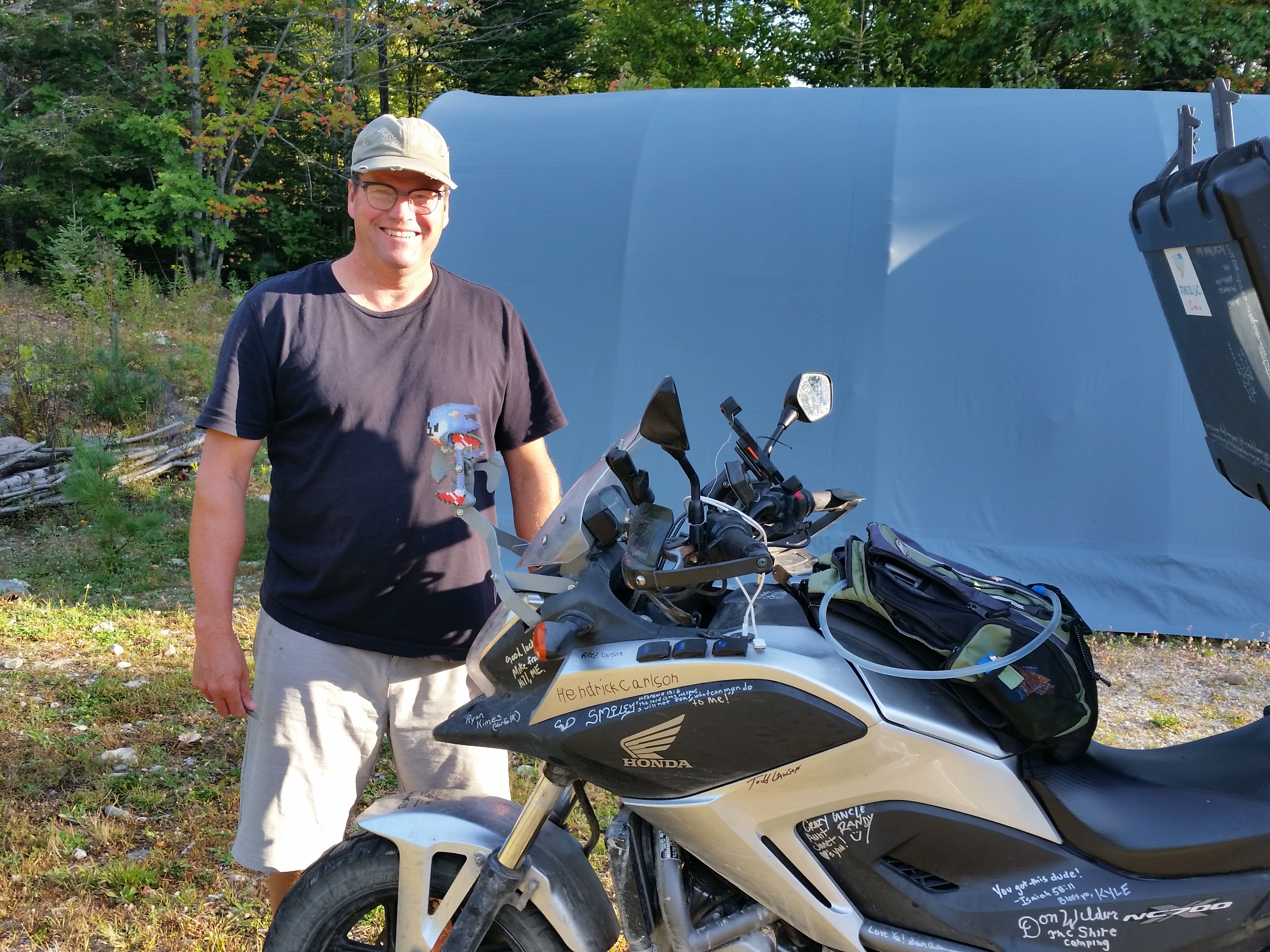 The ride down to Stonington was pretty. It was early enough that there was not much traffic. The Deer Isle bridge:

Stonington was a neat place. I did a bunch of writing while sitting by the bay. 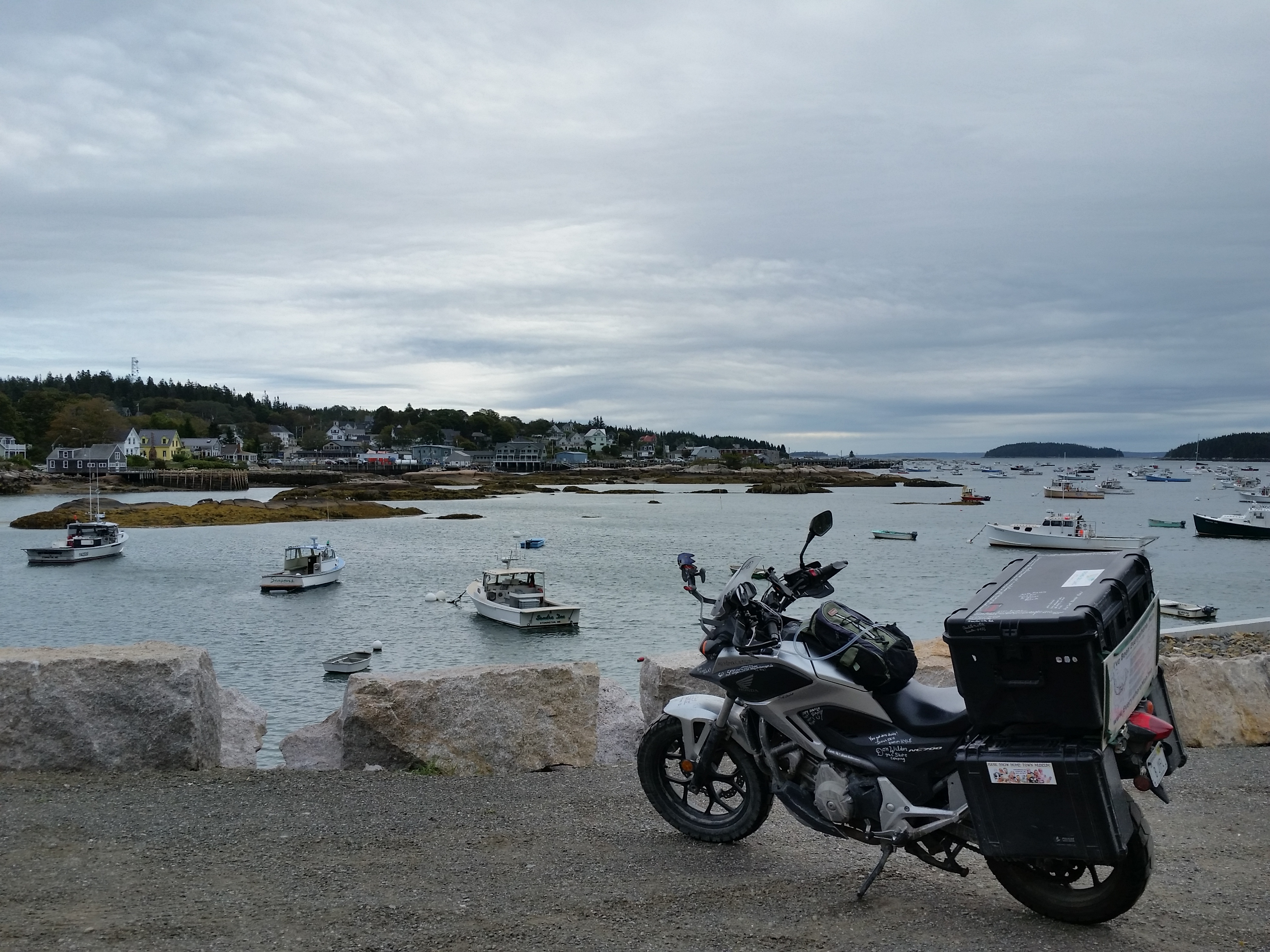 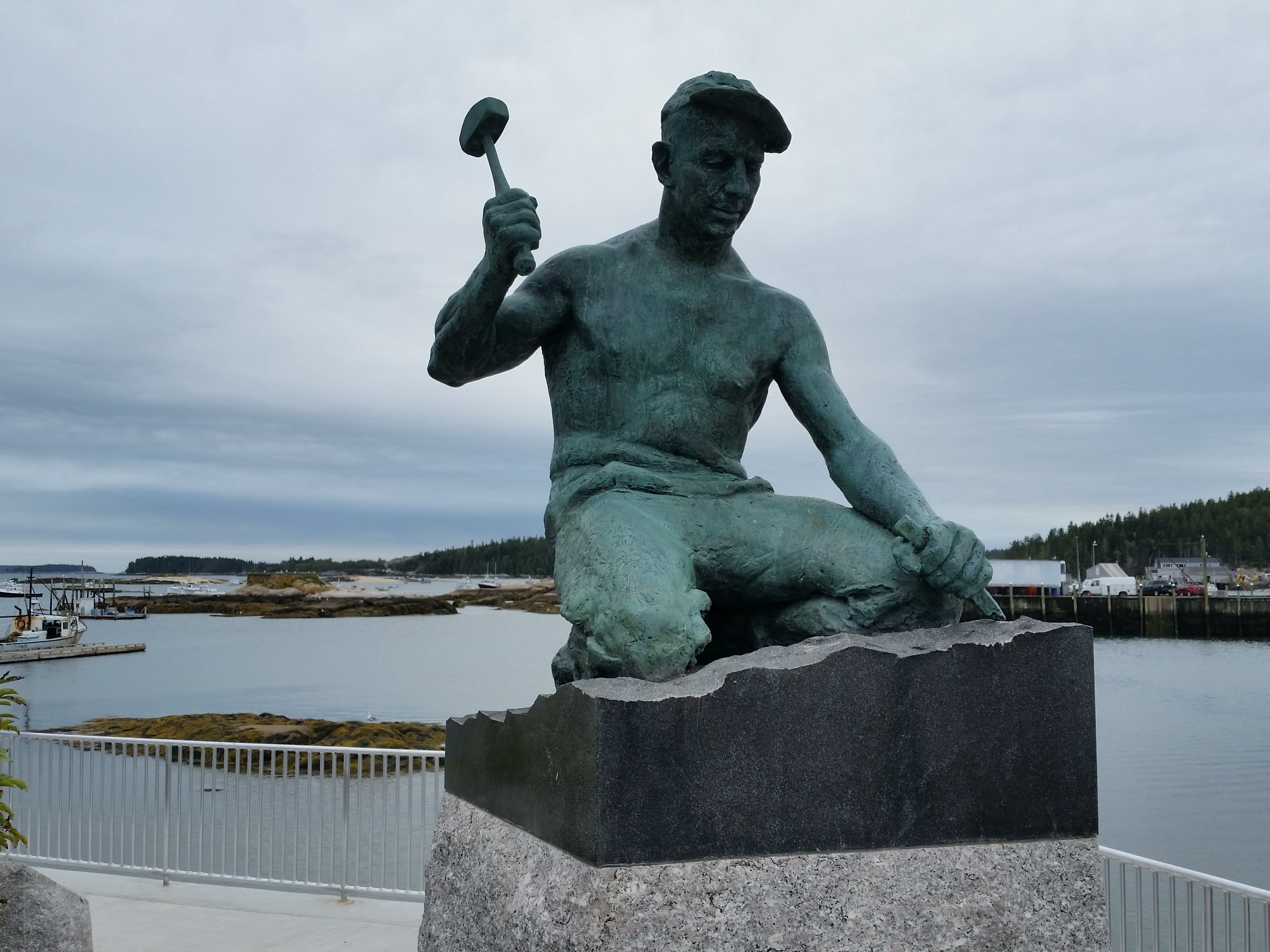 On the way back over the Deer Isle bridge (almost exactly halfway across) a milestone was reached.

What a great bike! Where did all of the miles go? I know there will be some mechanical difficulties to overcome, but I feel so thankful that I have not even lost a day to repairs so far.

I set sights for the main area of Acadia National Park, stopping for a bit in Bar Harbor. I decided to celebrate Annie’s milestone in a terribly inappropriate manner: By dropping her in a gravel parking lot. 😦

I have no idea what happened, I was just doing a tight U-turn and I fell to the inside. I jumped clear, but she hit fairly hard. Ughhhhhhh. It was the first impact ever suffered to the left side case (in 3 years, around 30,000 miles), all of the other falls have been to the right.

I righted her and sheepishly looked around to see if anyone had seen. They had. I didn’t inspect her very closely, but everything looked fine, so I rode off. I went over a little bump and it felt like she bottomed out.

I built the side case system myself, primarily to save money, but also because I’m not a big fan of pre-fab systems. Loads on a motorcycle should be carried as forward, as narrow and low as possible. Most universal systems don’t do a great job of this, especially with width. My system ends up being about 3 inches narrower than my handlebars. That’s great, but risky. If my mounting brackets bend, I can lose clearance between my mounting plate and my swingarm (the two places where my fingers are). 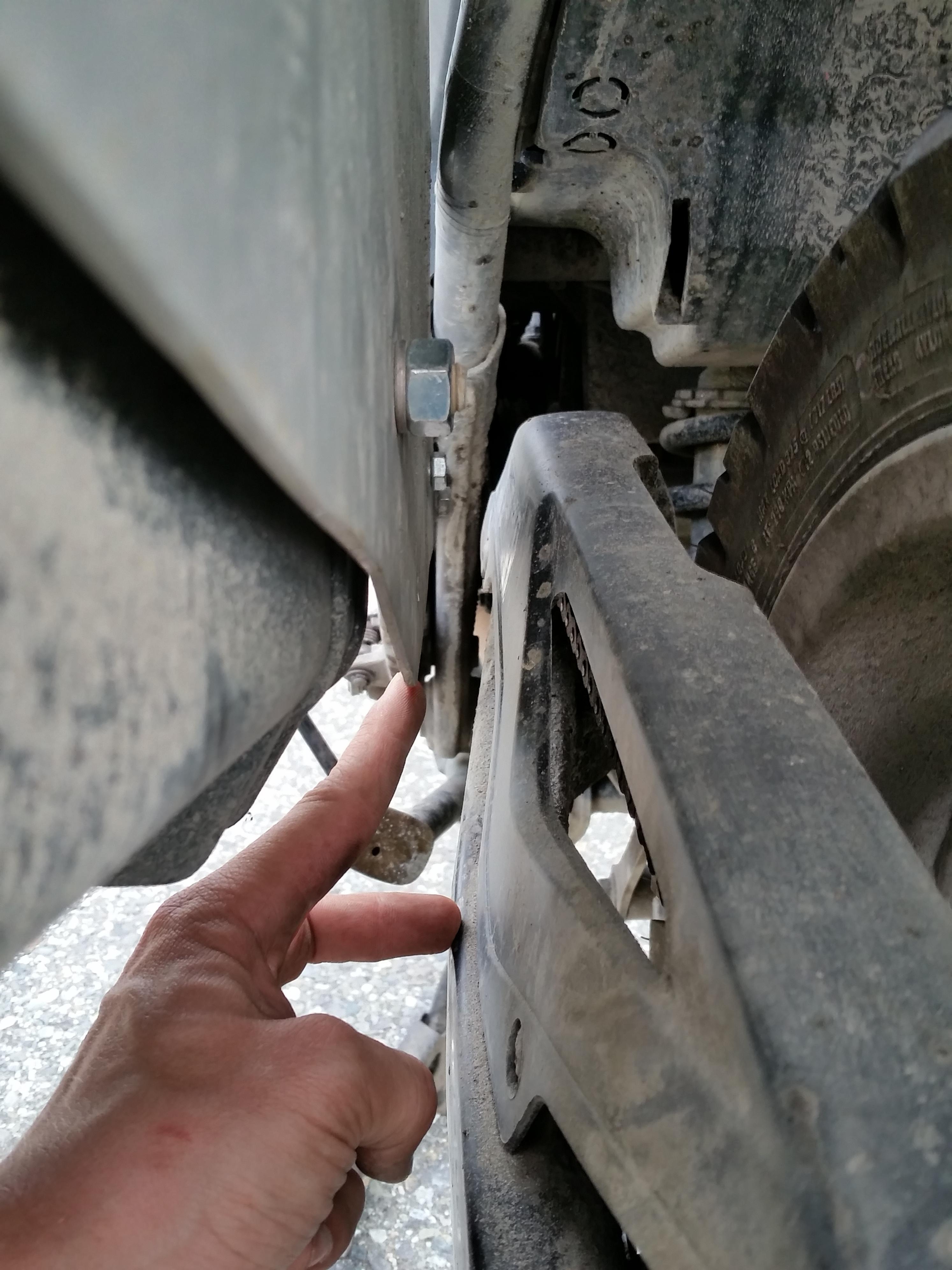 Having those things come in contact is NOT good. This had to be fixed immediately. I was still struggling with my attitude, so this was not a welcome occurrence.

Below is the mounting bracket that was bent. I engineered this to be the weak spot of my system, since they are available at any ACE Hardware and are only $6. It is a 6″ corner brace and I always carry a spare. 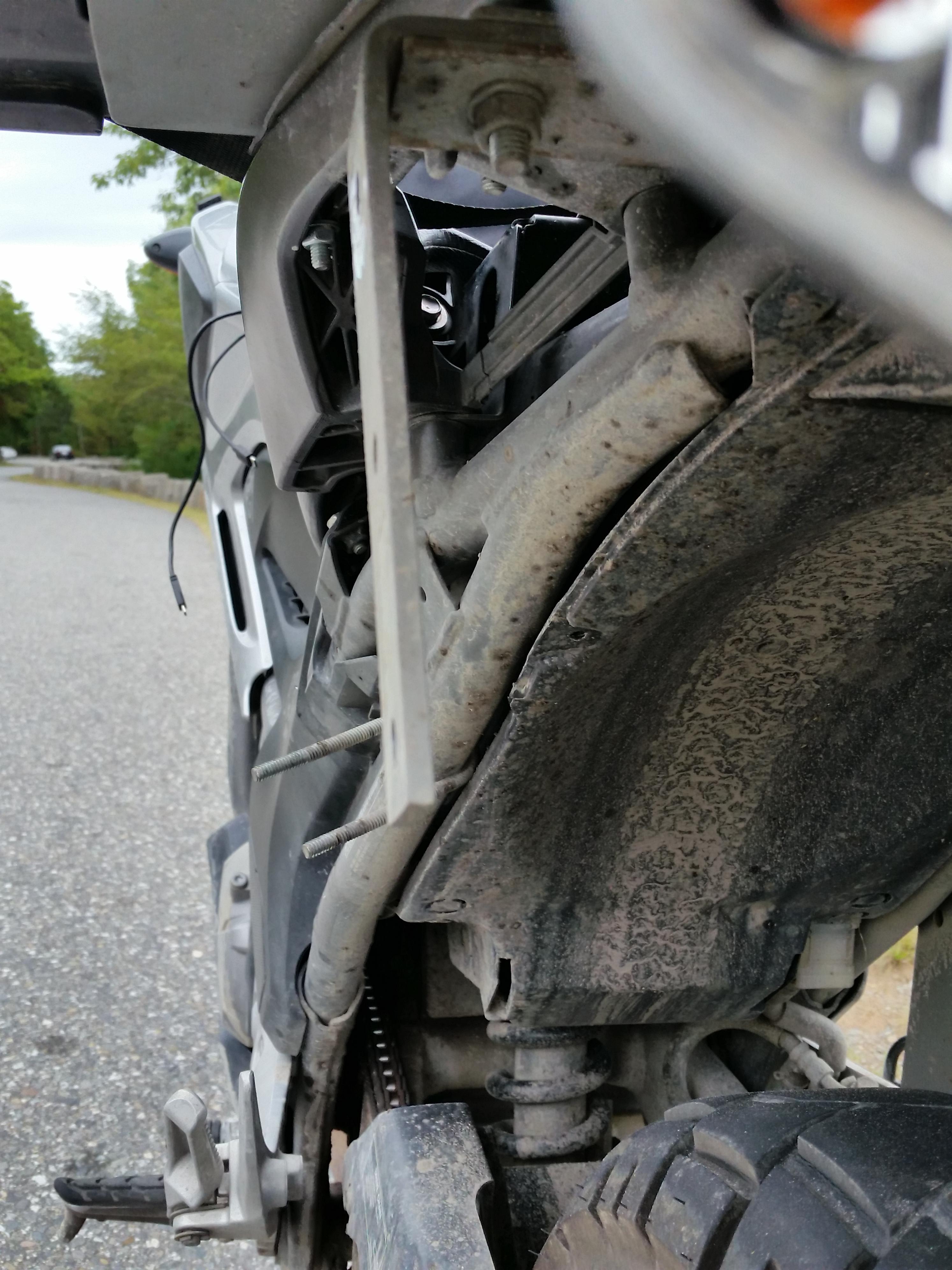 I decided to just bend it back rather than replace it, but the whole process still took about an hour. It was a pretty place to be stranded though. 🙂 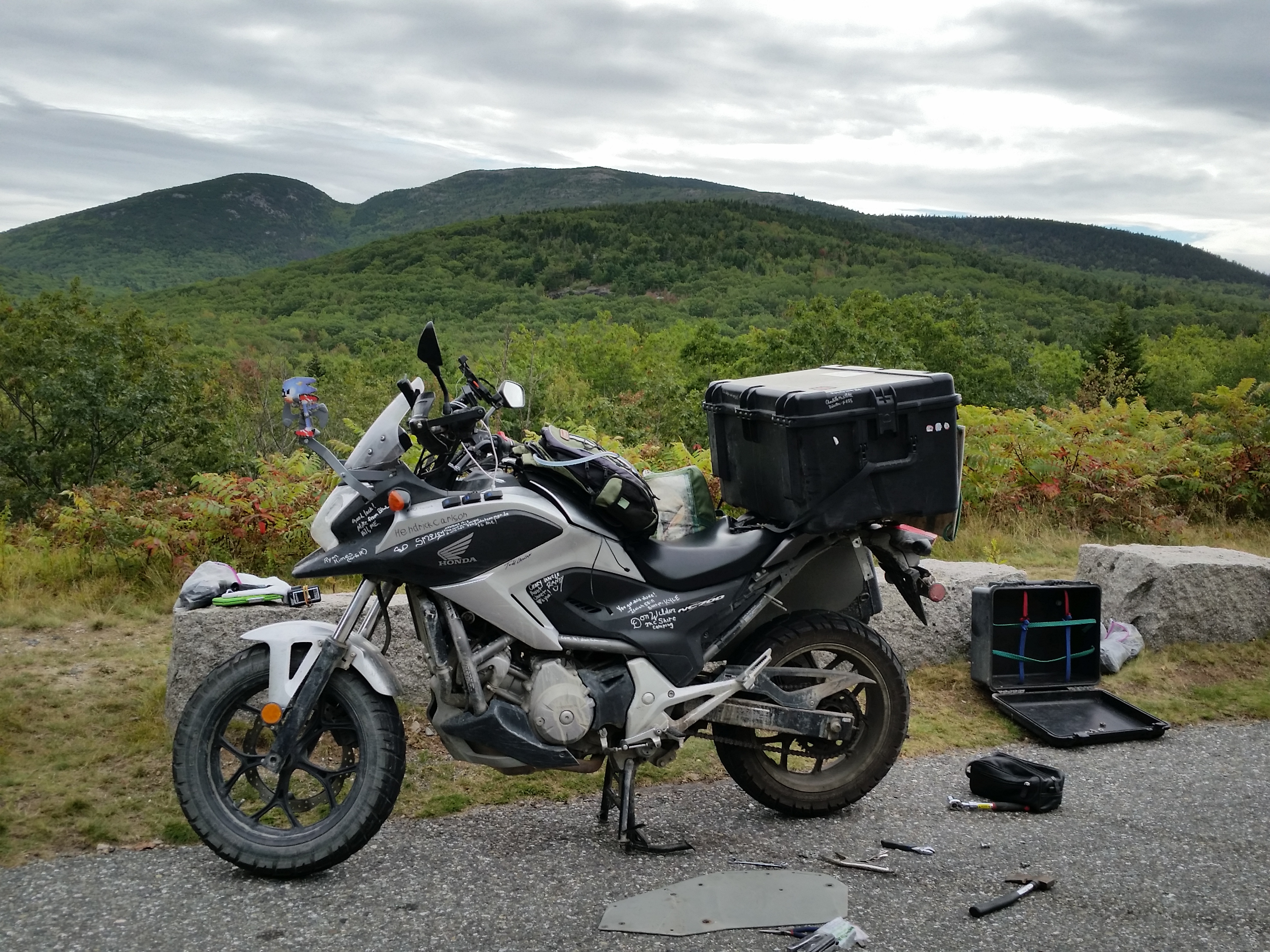 I had some nice conversations while I worked, including meeting a guy from Dodge City, Kansas, the final place mentioned in the song.

Fixed! Back on the road in Acadia! I promise to never let that happen again, Annie. 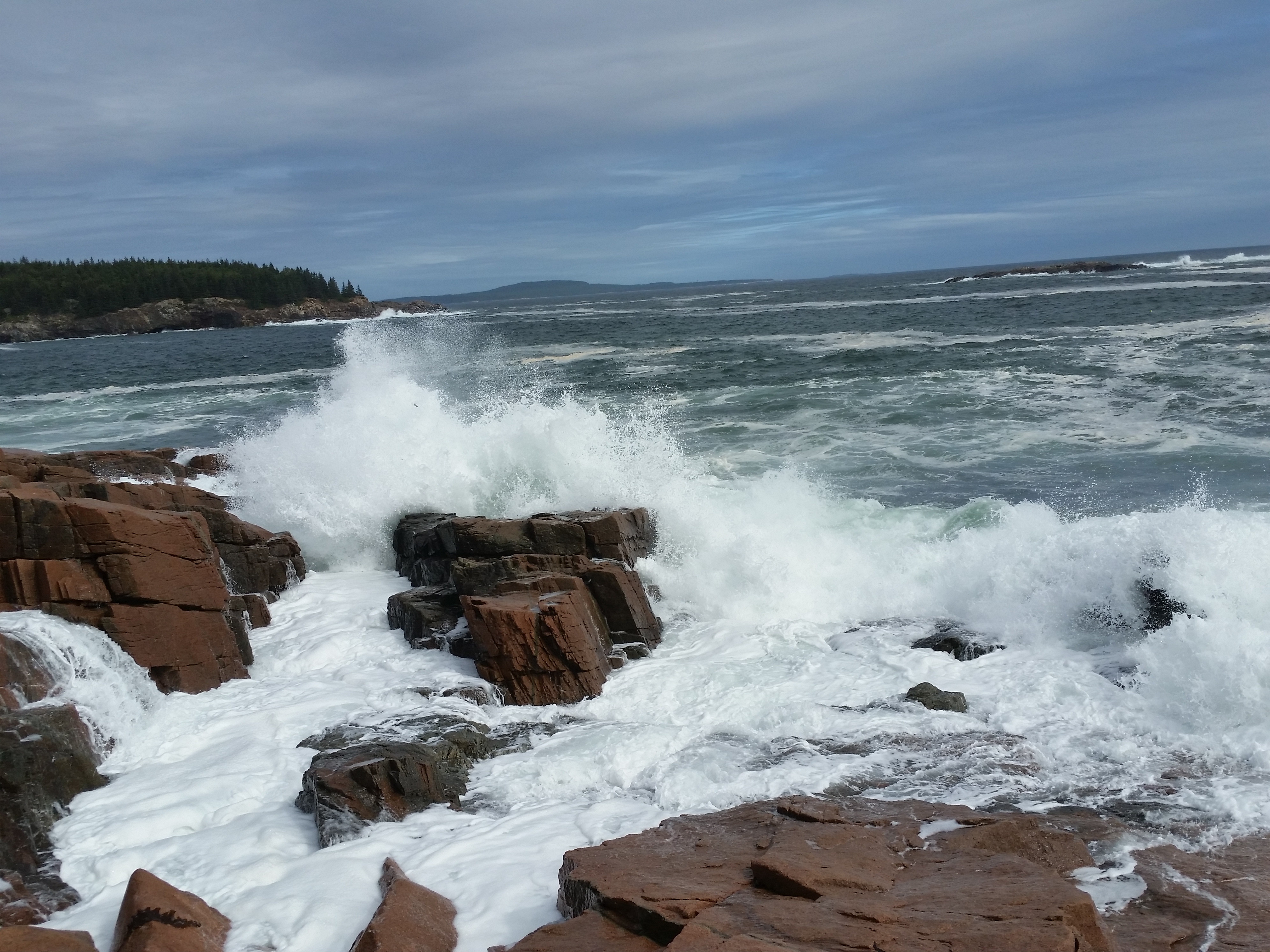 Then it was back to the Elsworth library for more wifi time.

I stopped at a quiet park to cook some grub and talk to my parents on the phone. While talking, I heard a thunk behind me. I looked behind to see Annie, once again, lying prone on her left side.

Are you kidding me? Her kickstand had sunk into an undetected soft spot. So three years without a left side fall, then two within about 5 hours?

I was a little late getting to Mark’s course where I decided to camp for a second night. I was really thankful to have somewhere to go.

There’s a lesson here, right? All he was offering was a little patch of terrain, but it was immensely valuable to me. Do you ever feel that you have nothing to offer? Like you are not well enough equipped to help others? I assure you this is not true! I would invite you to ask yourself: What is the little patch of terrain in my life? It may be just what someone else needs. 🙂

Bangor day!…sort of. It was mostly a business day. I got up and into town early and snapped a photo of the mural at the top of this post.

My first order of business was getting some new spark plugs for Annie. After planting her in the dirt a couple of times the previous day, it was the least I could do. I set course for Bangor Motor Sports.

They were really friendly there and got me all fixed up. Since they are “specialty” plugs, it was $43 for the pair, but that didn’t bother me too much. Unfortunately, they didn’t have a lens cover for my rear turn signal.

They did have a brand new NC700X in the showroom. They’re not very pretty when they are all cleaned up (at least that is what I told Annie): 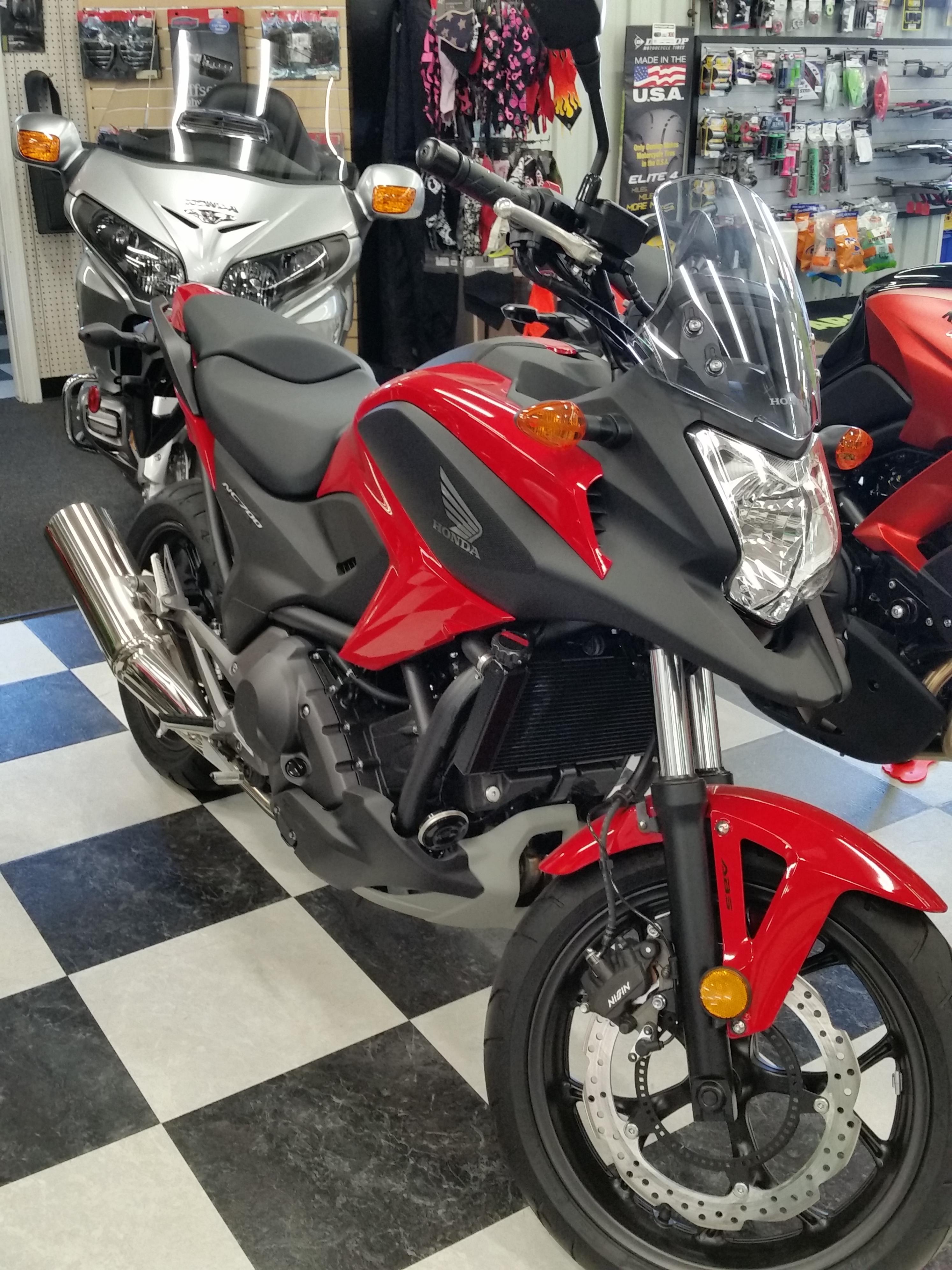 This blog has been full of adventures and there was another one to be had today. My bravery and industry would once again be required. I was about to do something that I had never done before: Go to a laundromat.

Seriously, it was the first time in my life.

It was $8 total for my one load, but I probably picked a machine larger than I needed. It was nice to have everything clean though. There wifi was decent so I got some work done while I waited.

I had a difficult time figuring out what to think of Bangor. Indeed, it seemed like the city’s residents had a bit of a hard time too. I probably met about 10-12 people as I walked and rode around the city, asking them various questions and trying to learn more about the place.

Bangor grew as a hub for lumber, but that industry has declined significantly over the years. One Maine resident described Bangor as “serving no purpose anymore.” (I’ll leave them anonymous so they don’t get evicted from the state.)

The people were all friendly and there were a lot of nice parts of town. Maybe they are still looking for what their true post-lumber identity is? Hard to say.

A nice area along the waterfront: 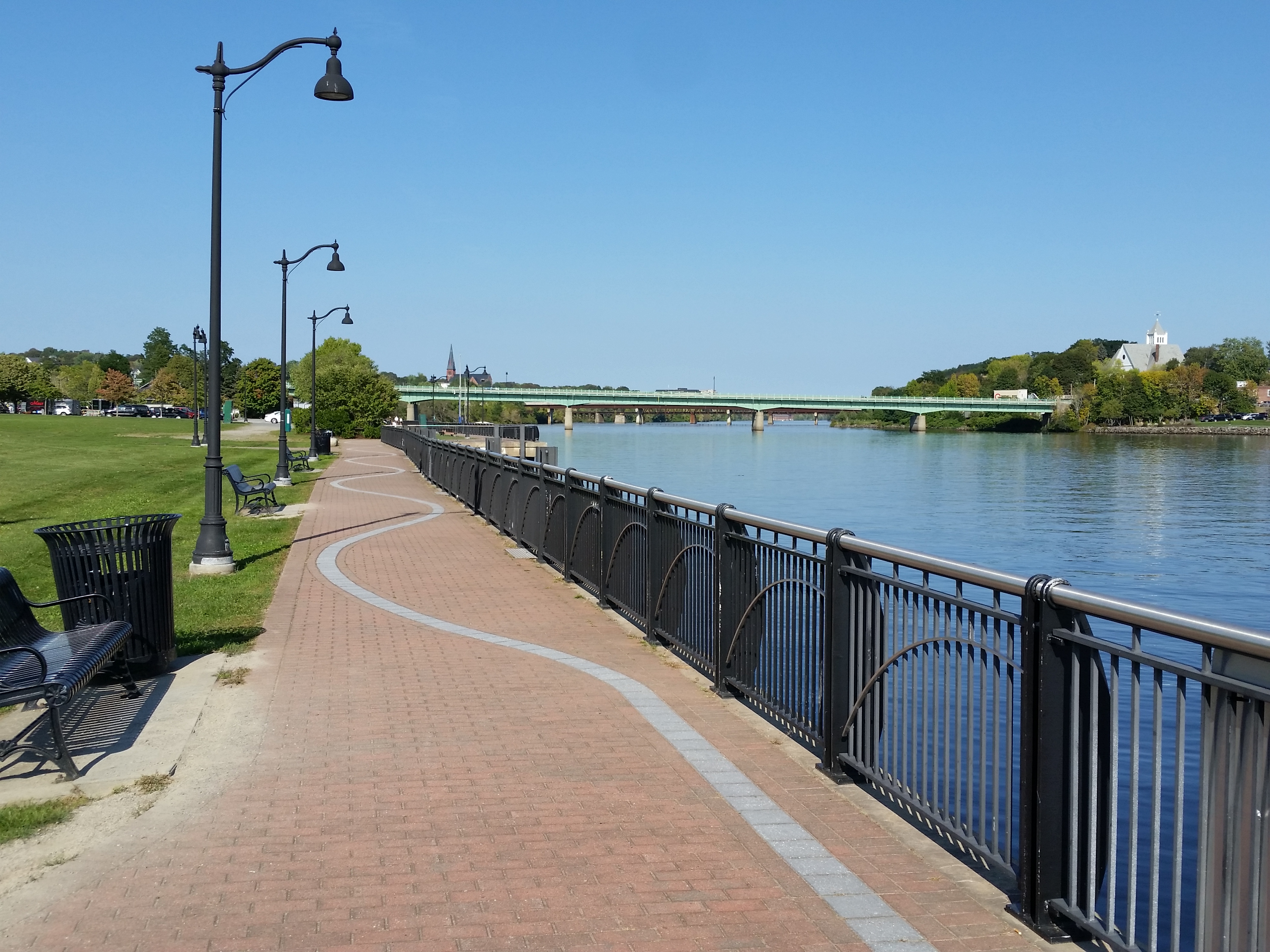 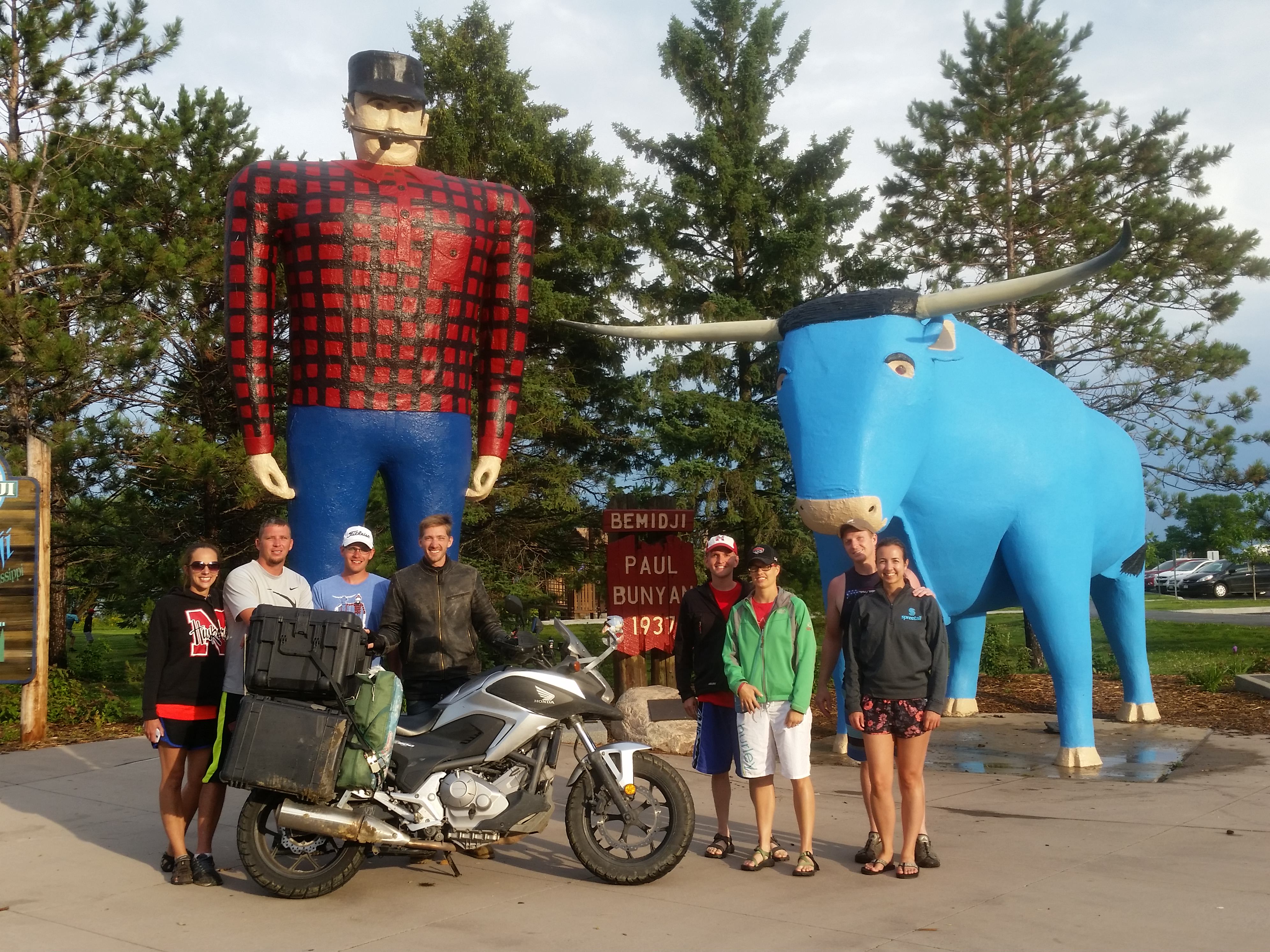 This was with my friends in Bemidji.

I decided not to fight it. If I have two Pauls, that’s not the end of the world. But I did resolve not to photograph any more giant lumberjacks on my journeys.

The downtown area was hopping, as there was an Eric Church concert taking place in the evening. I scouted the Paul location, but it was just too busy for me to feel comfortable rolling Annie up to it.

I decided to linger another day and try to get the photo at sunrise instead. There were no promising free campsites in the area, so I decided to pay for one. I was still feeling worn out and I really needed a shower, so it seemed like a good investment. I found one for $24 which was perfect.

I told the lady that I usually go to bed early, so she found me a spot by “the old people.” I’ll take it! 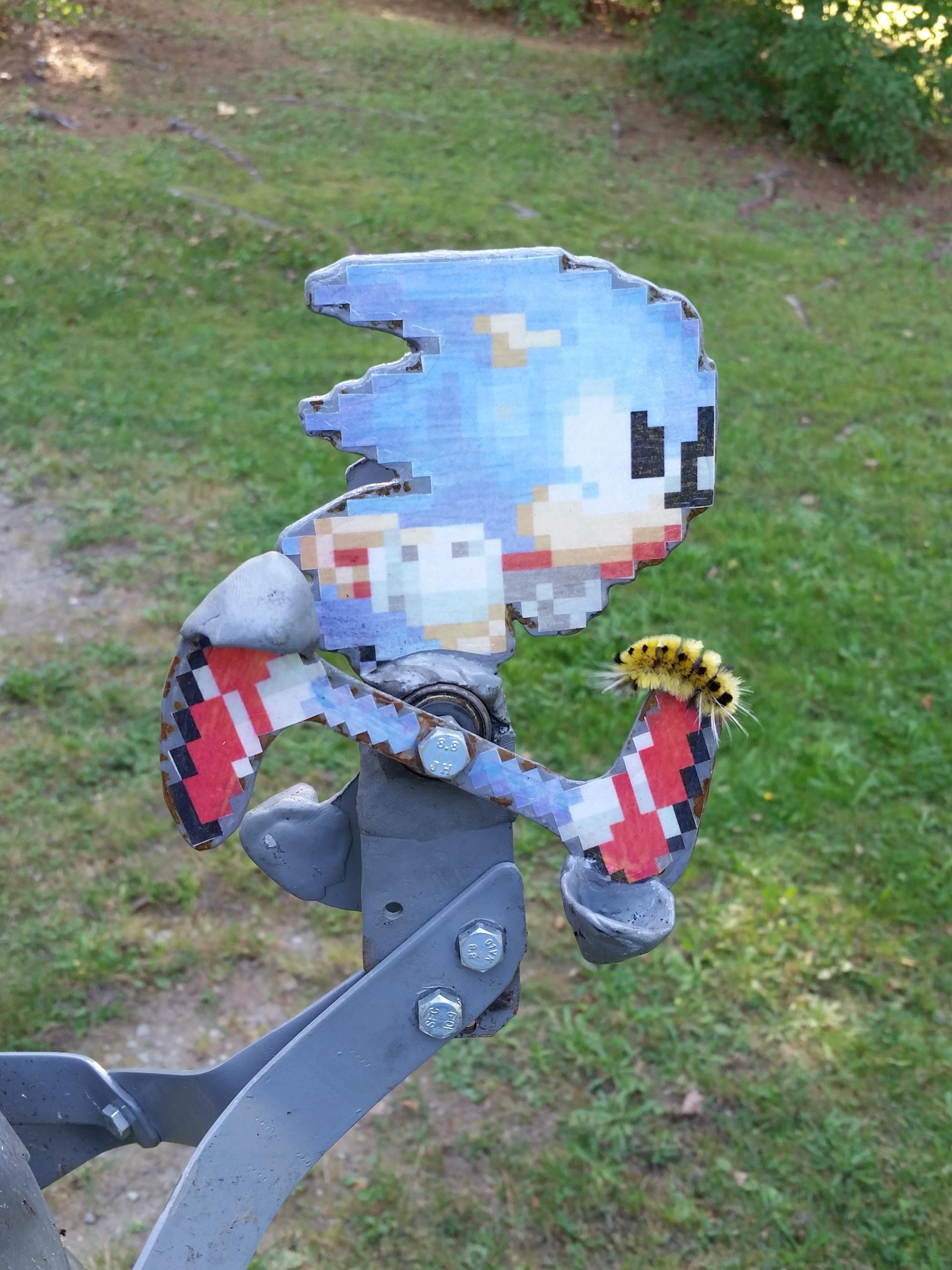 I’m so proud of him.

I was on the road shortly after sunrise and got to Paul before anyone was around. I give you……Bangor: 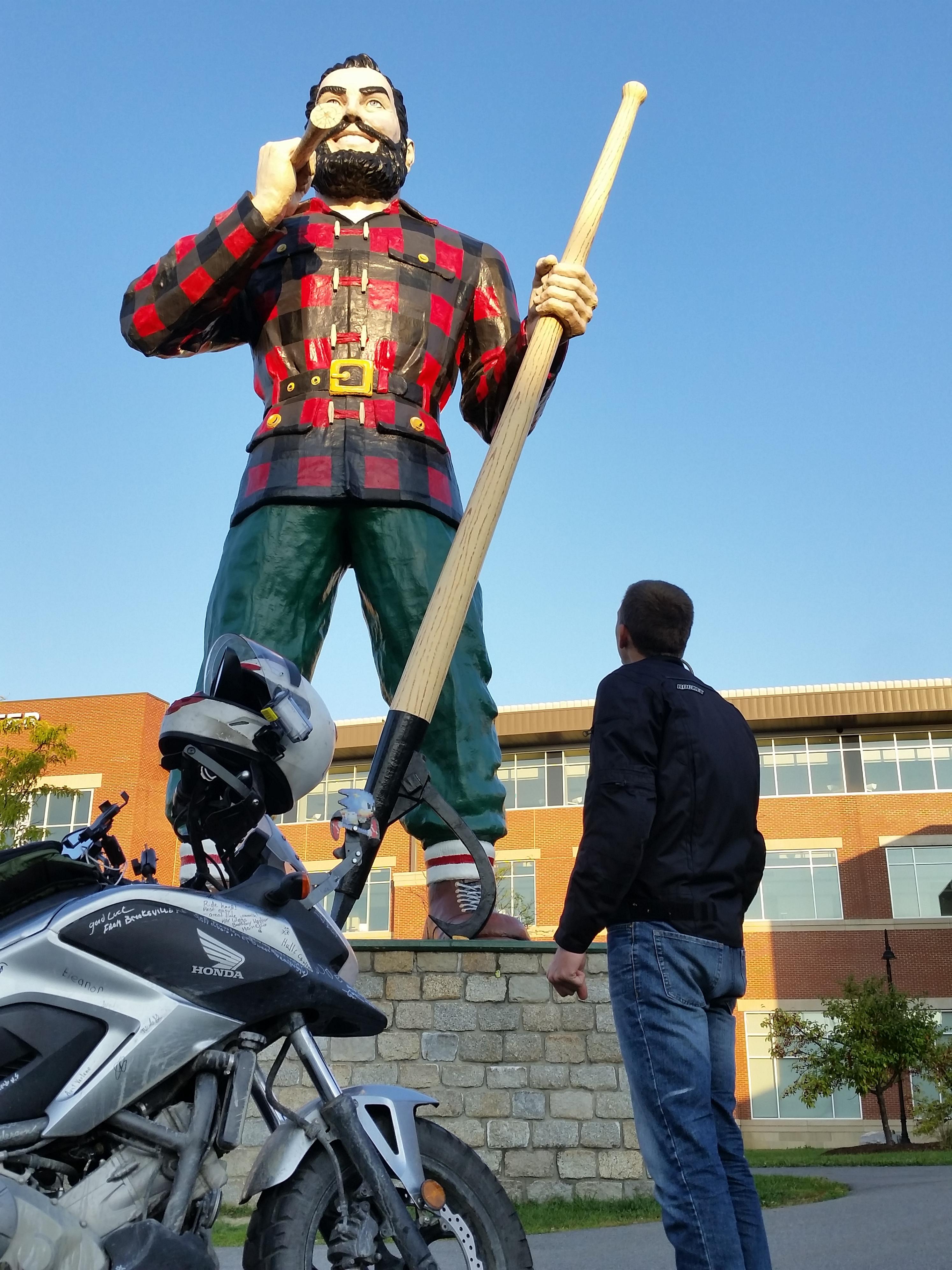 It felt good to check a place off of my sign. It had been 12 days since Bev and Gord had crossed off Schefferville.

That was so nice…..let’s get another!

Place 27 of 92 was just down the road: Waterville, ME. It was still early when I arrived and I found some good places for pictures. First was the Two Cent Bridge.

On it looking south: 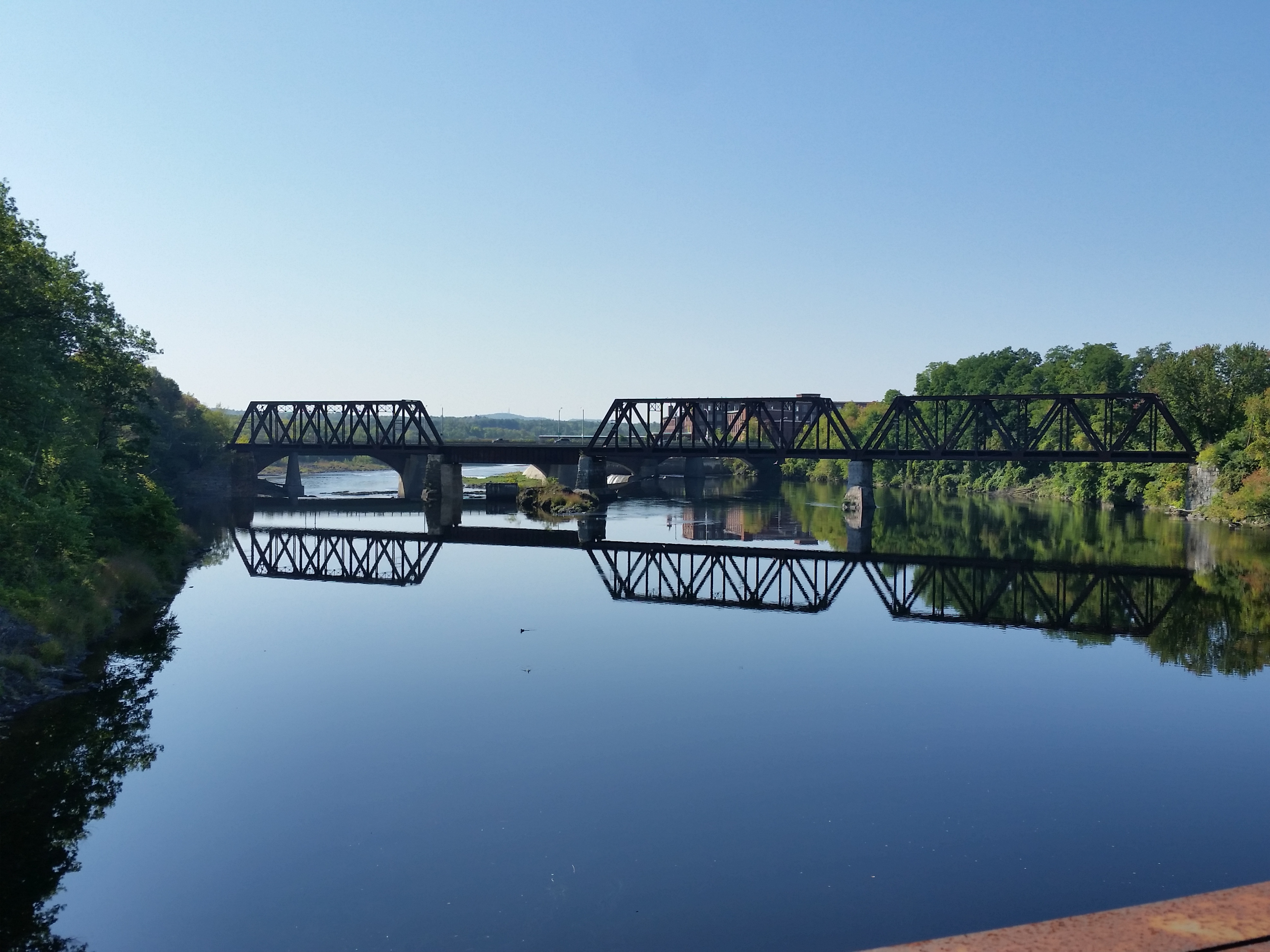 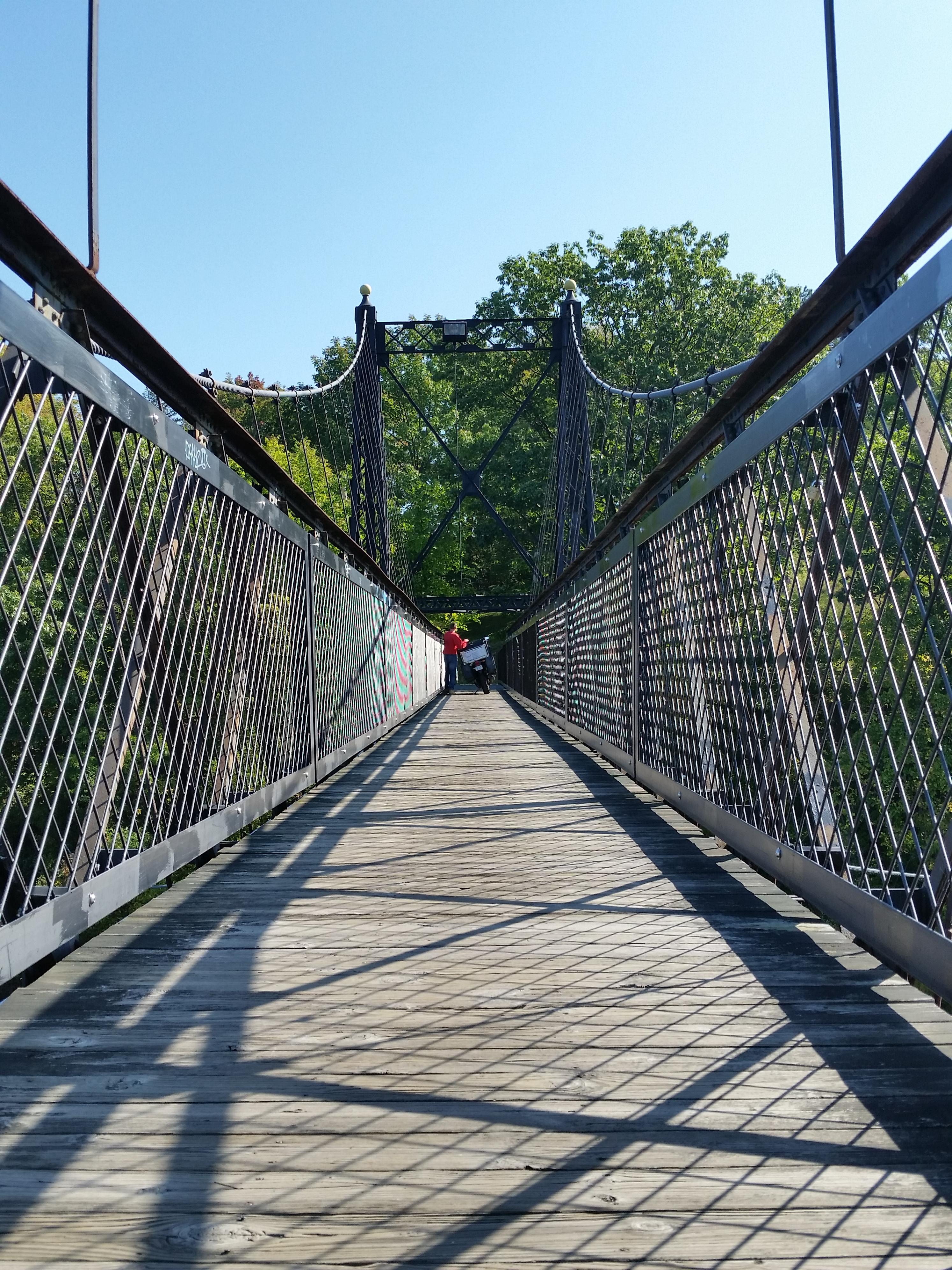 There was an old abandoned building right next to the river which was really cool looking. I never found out for sure what its use was, but I think it was a textile mill. It’s probably not fair to use this as the photo to represent this place, but I’ll still include it here. 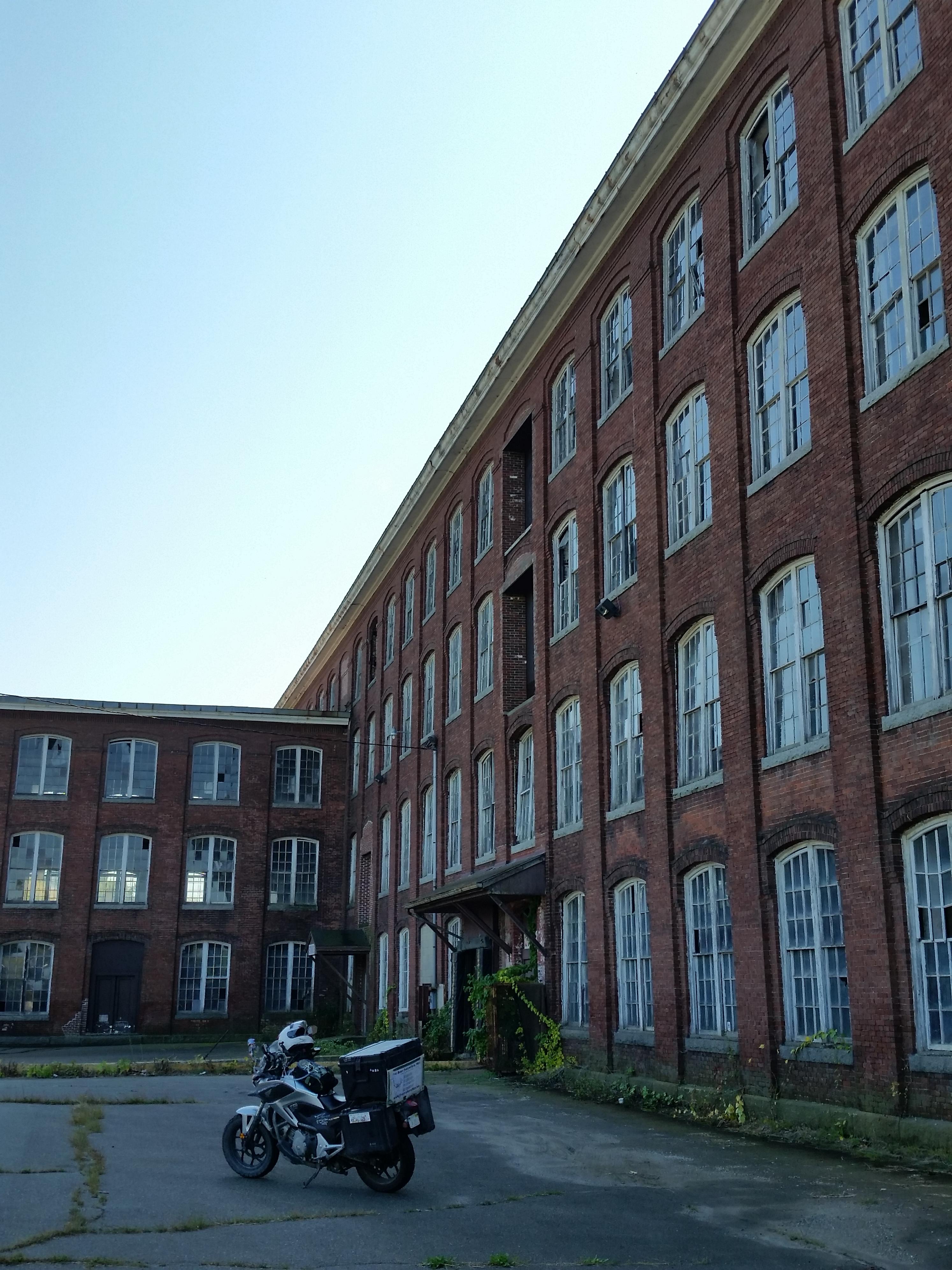 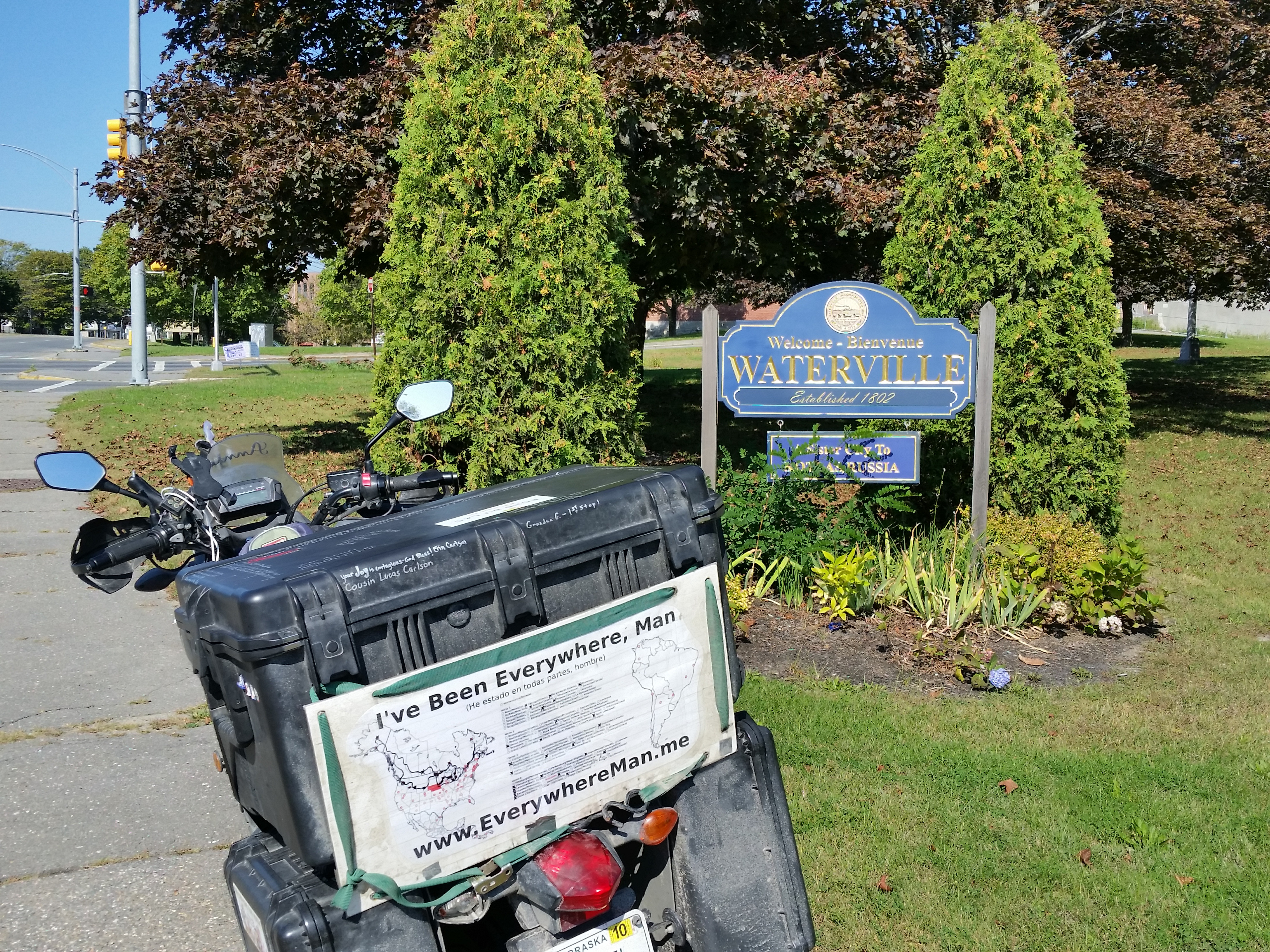 There were lots of neat things to see. 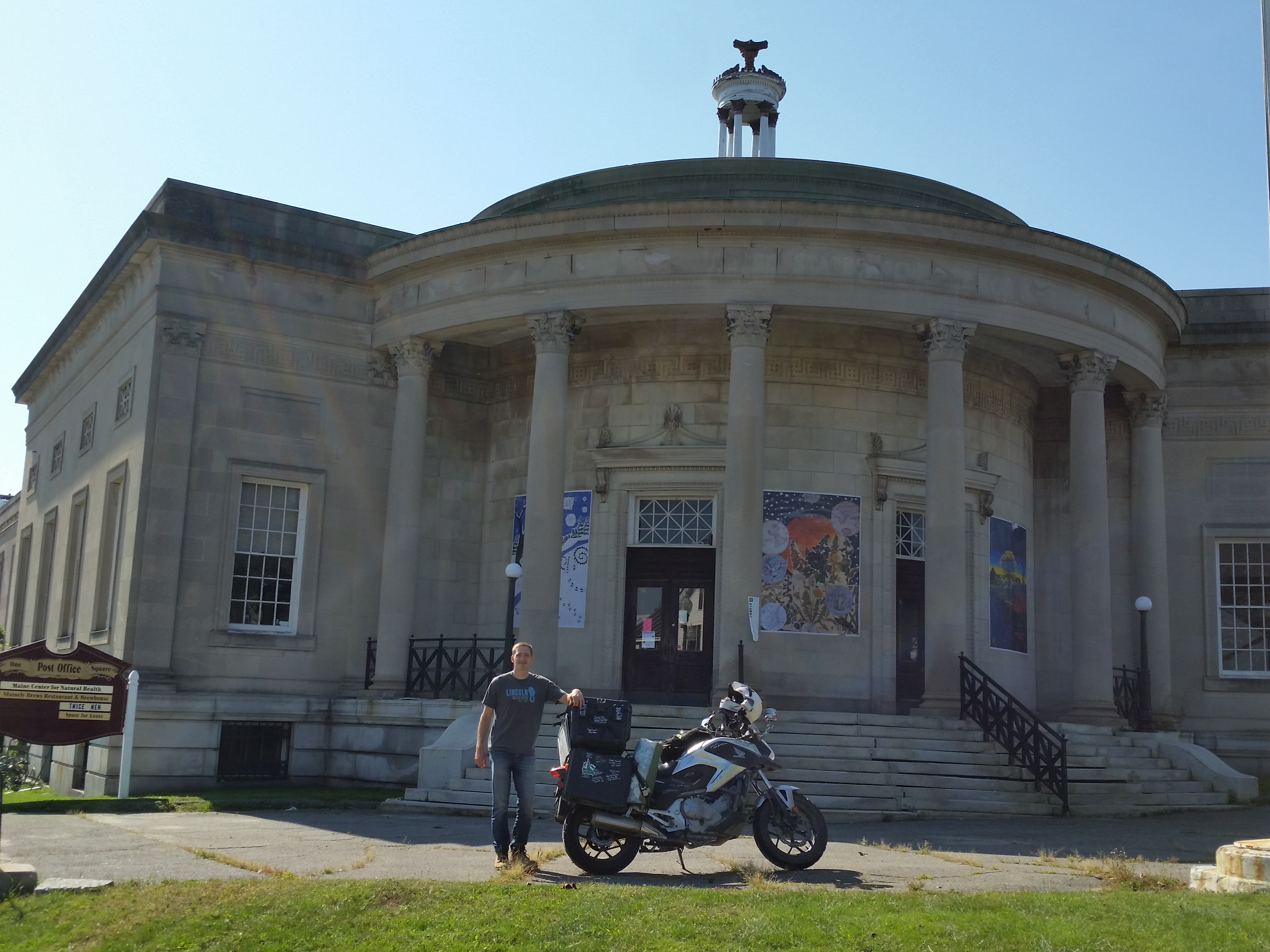 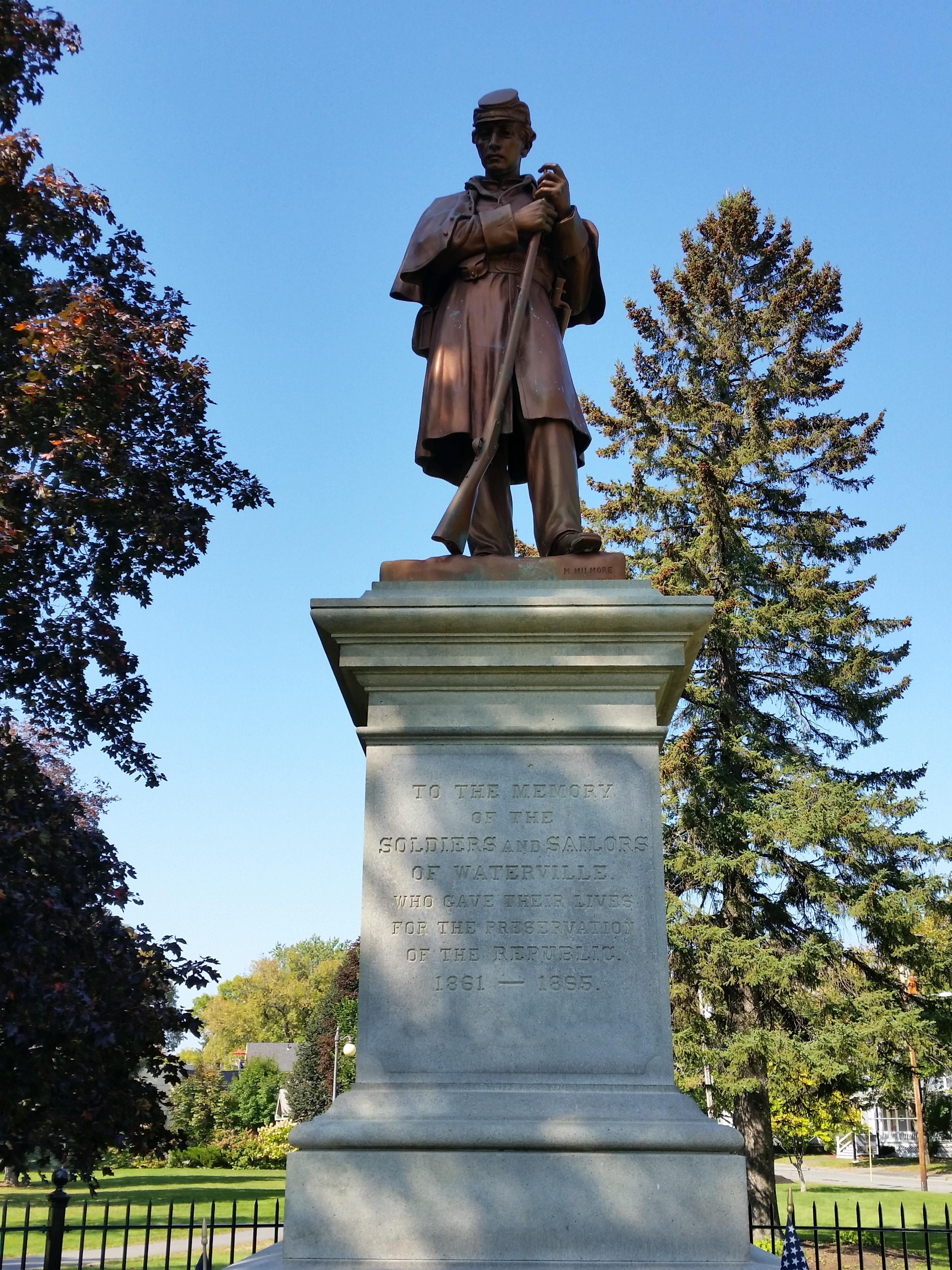 Waterville is a college town, being home to Colby College. I decided to have my experience in the city connect to this, so I went to their art gallery. It’s free! 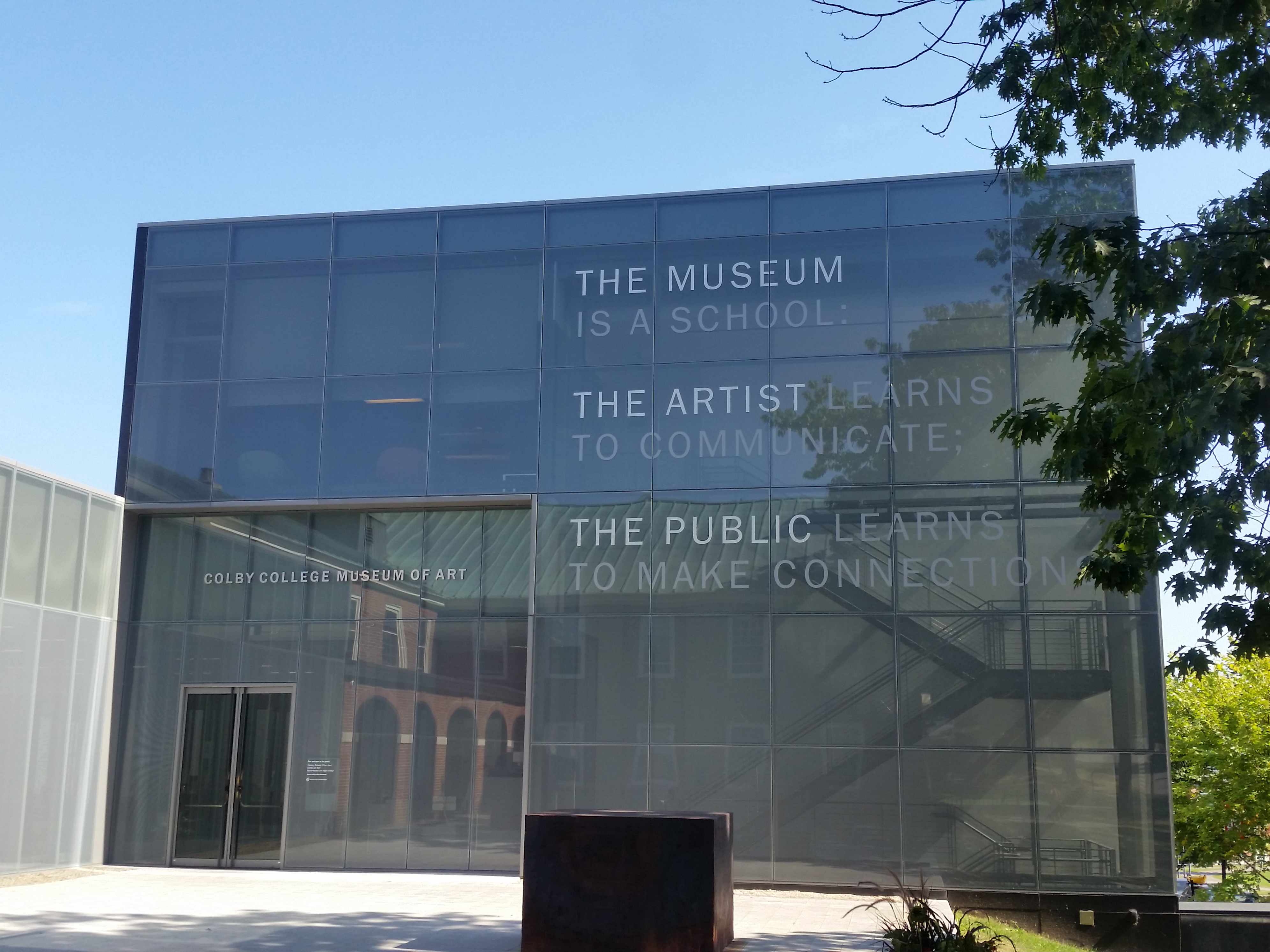 Now I hear what you are saying: A dirty old biker? In an art gallery?

Remember, I had a shower within the last 24 hours. They didn’t suspect a thing. 🙂

The featured artist was a painter of landscapes from Maine. I was very much not impressed with his work. I had to laugh at some of the placards. If you ever want to say “he can’t draw people” in the nicest possible way, say it like this: 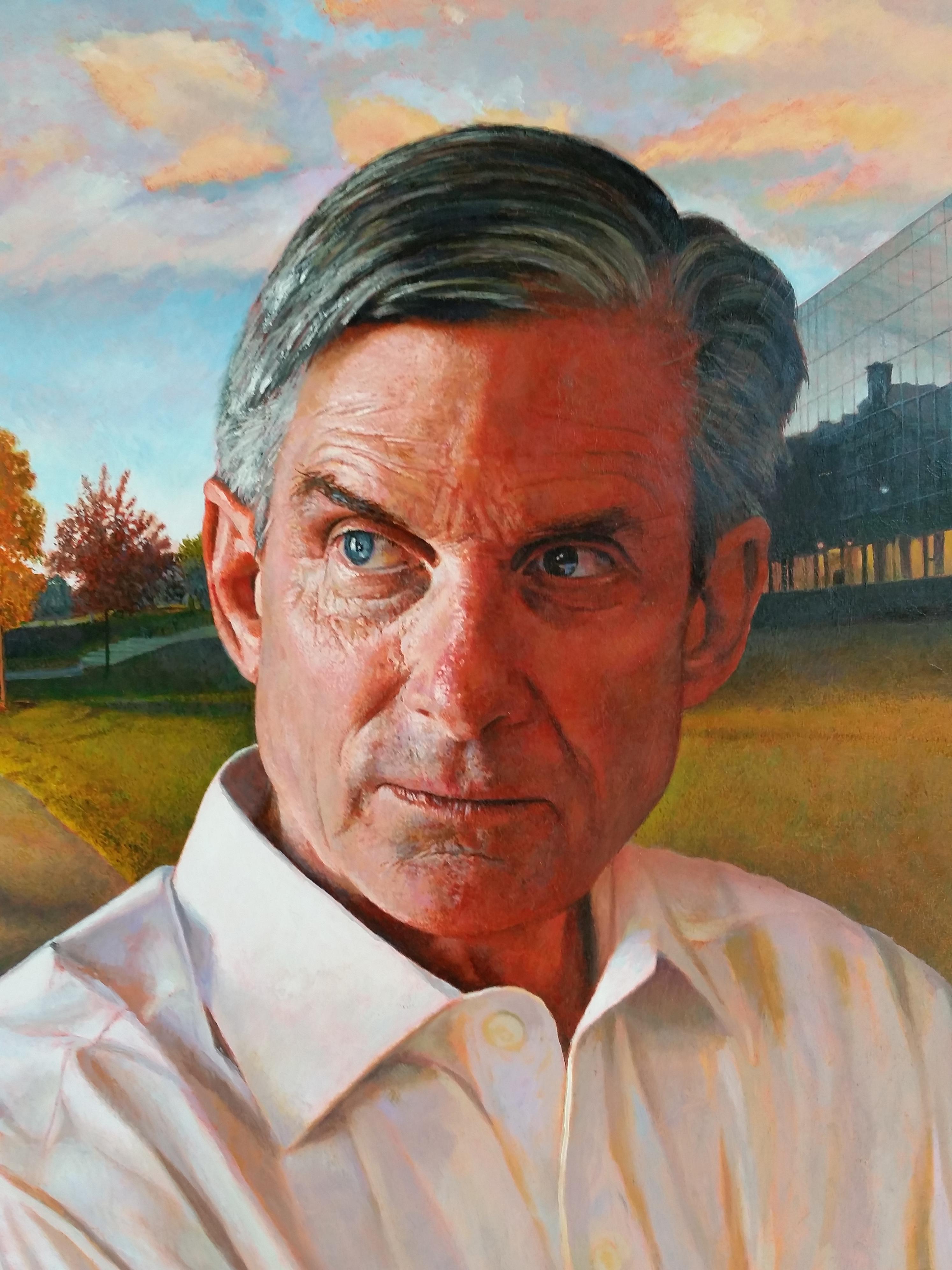 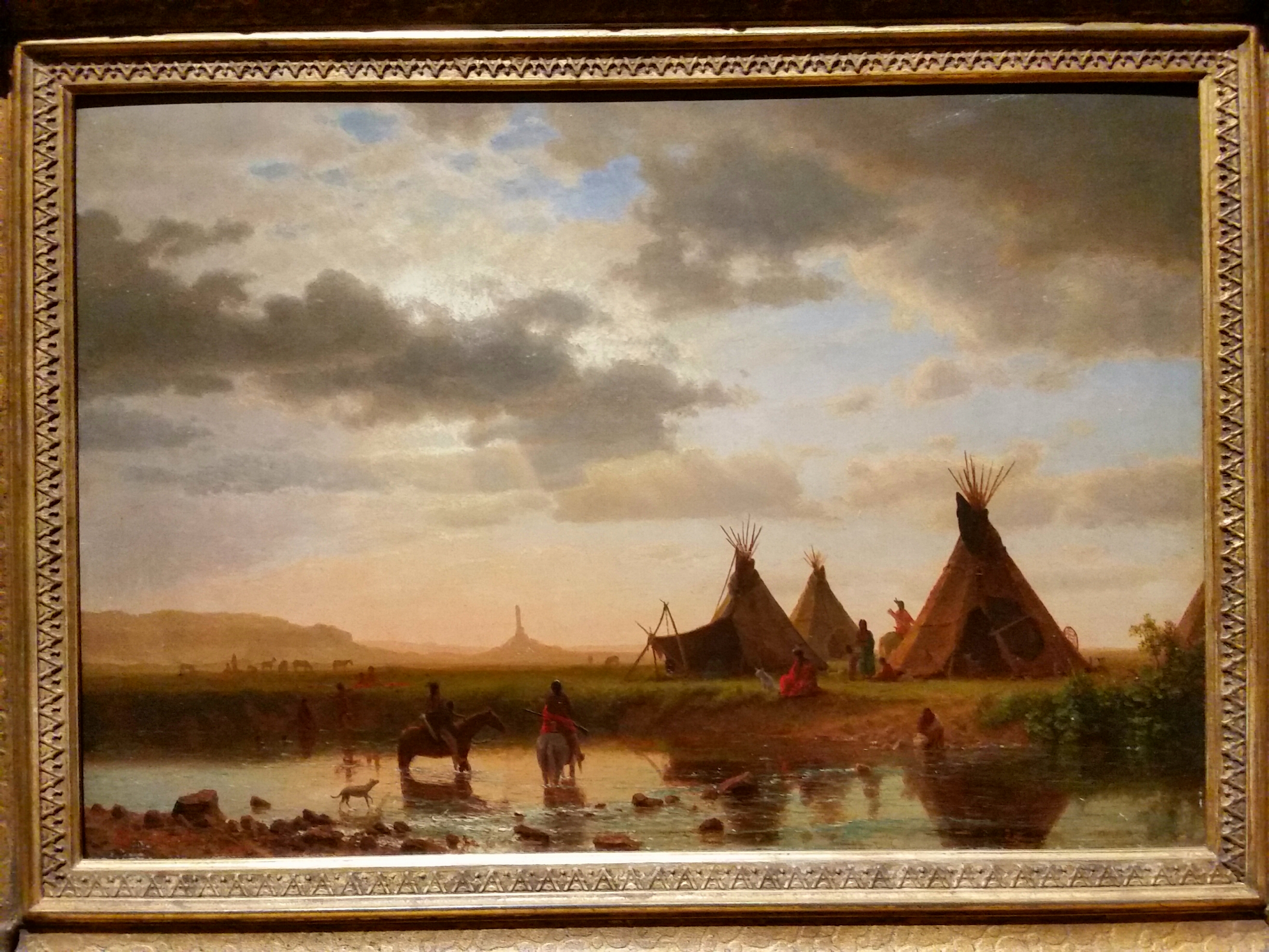 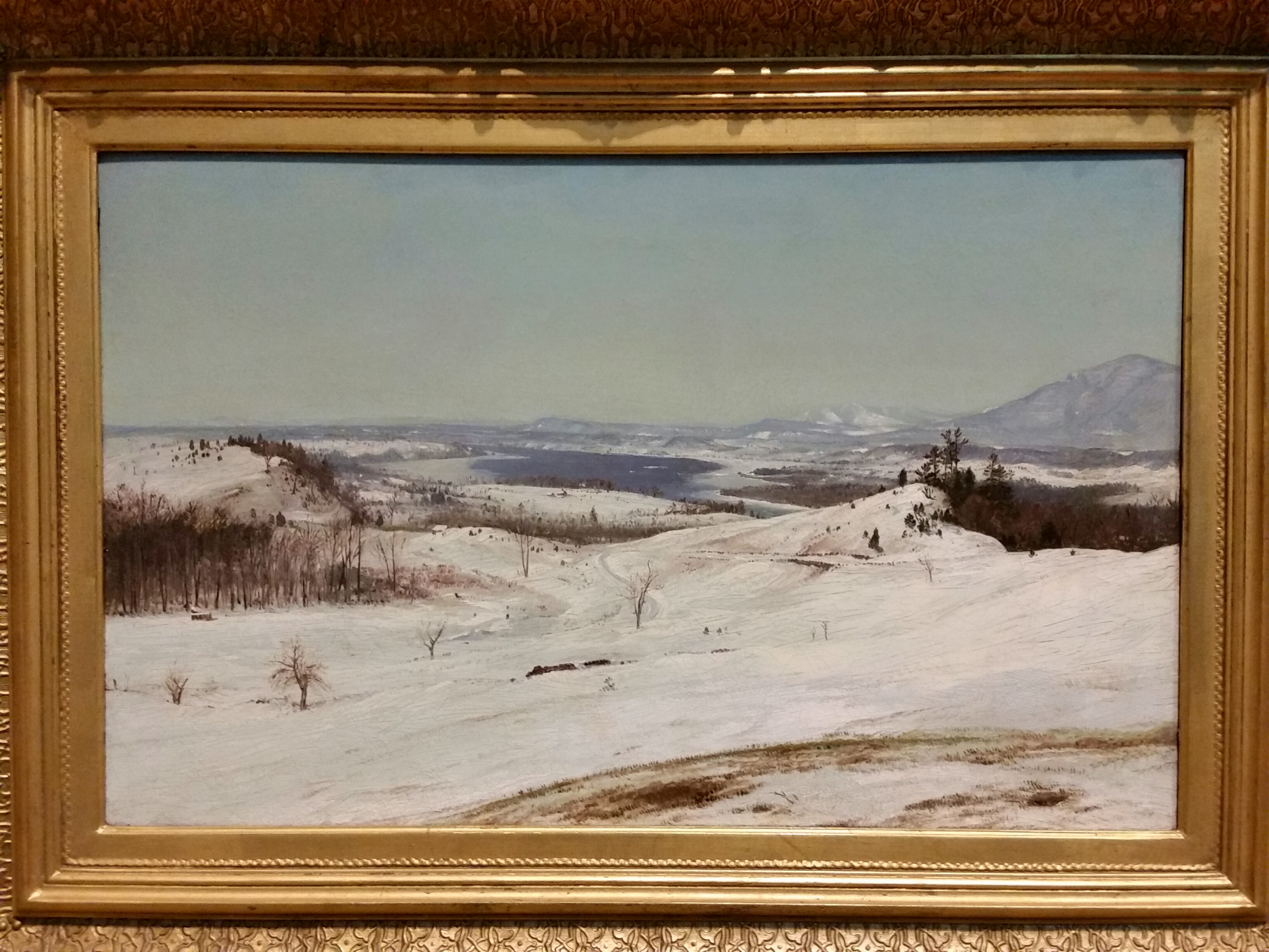 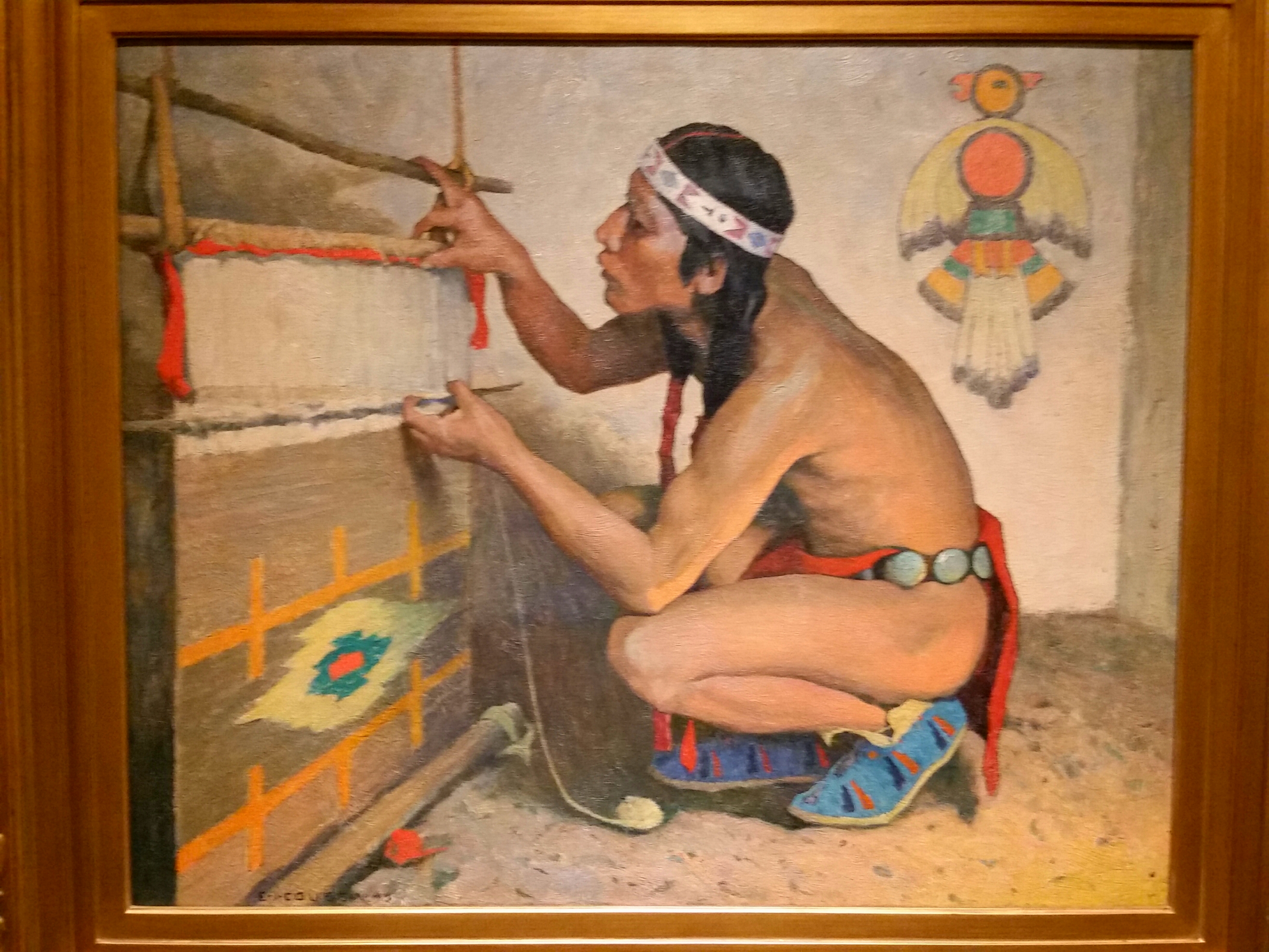 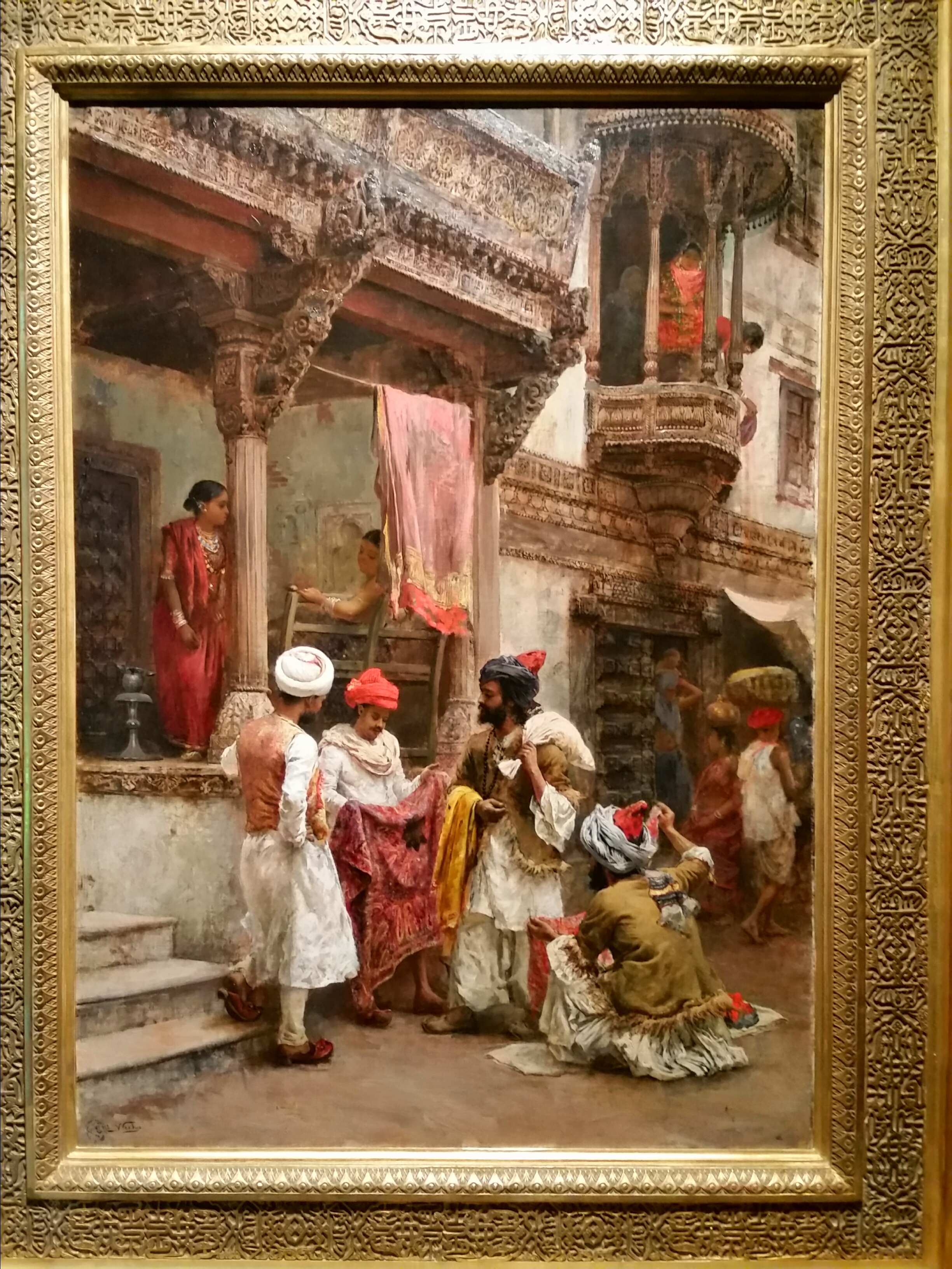 It was a great change of pace from my normal activities. Waterville is complete!

I’m going to pause the story there and share a different one quickly. Distinguished readers of this blog will remember me posting a sign at the deserted campsite in backwoods Ontario (this post). 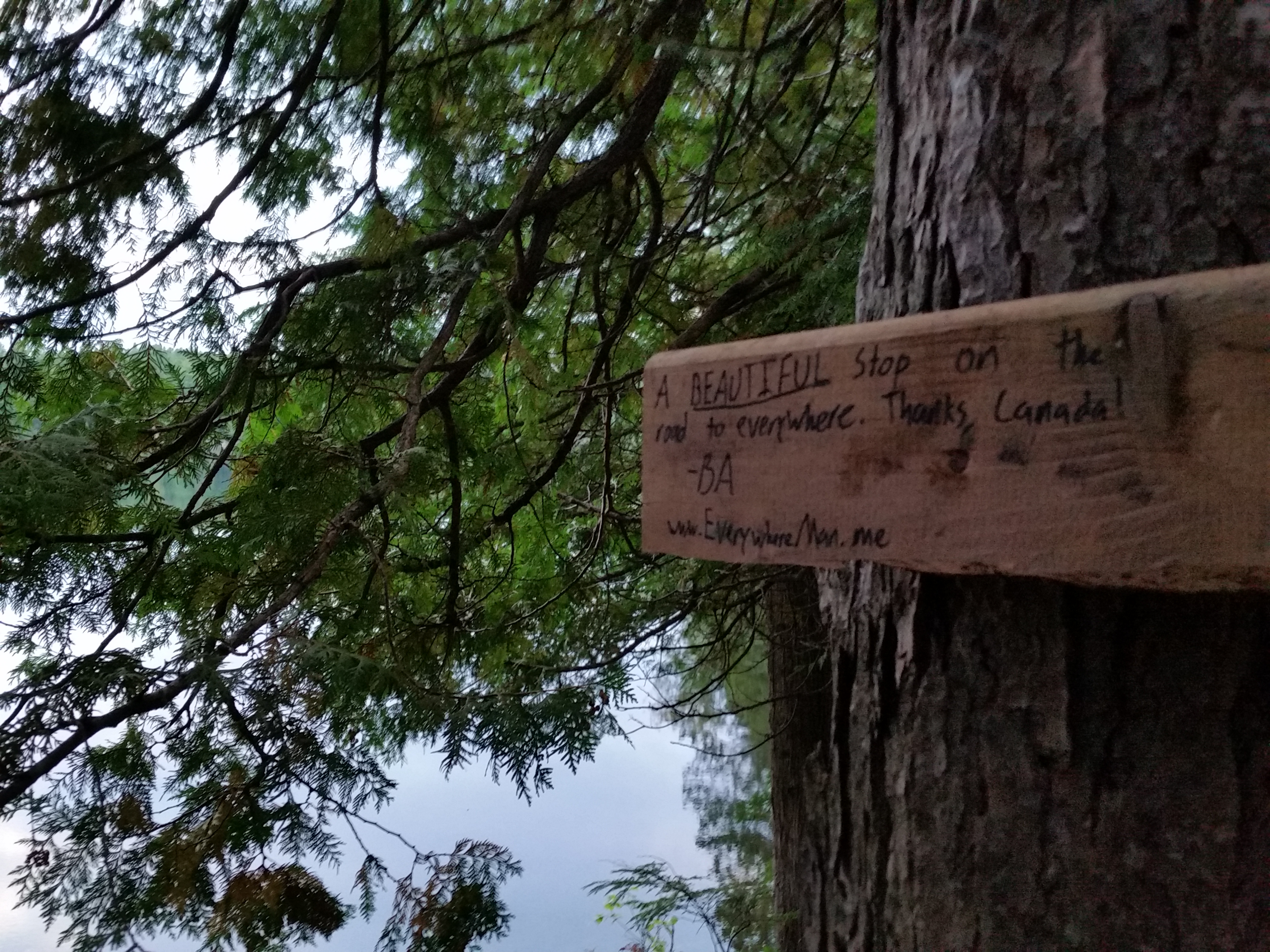 Thank you for sharing this, Vonda!

As it so happens, she is a published writer, specializing in Christian fiction (website here). She has already left me some very encouraging comments and has offered to help if I would like to publish a book in the future. Once again:

We’ll see what the future holds. As always, thanks for reading.

Realtime update: I’m still in the Brockport, NY area. I’ve been treated so well here. Mood-wise, I’m probably at my highest point in the past 10 days. A couple of slower days has really helped. I still might linger for another day or two here, as it feels good to get caught up. Thanks for all of the encouraging comments and well wishes. I read them all. God Bless!

14 thoughts on “Back to Basics in Bangor”