I was missing my home state. I was needing to feel at home. Then came the people of upstate New York.

With a new tire now pushing me along, I made my way into the Adirondack Mountains. On my way to a free campsite, I stumbled on a pretty good picture. 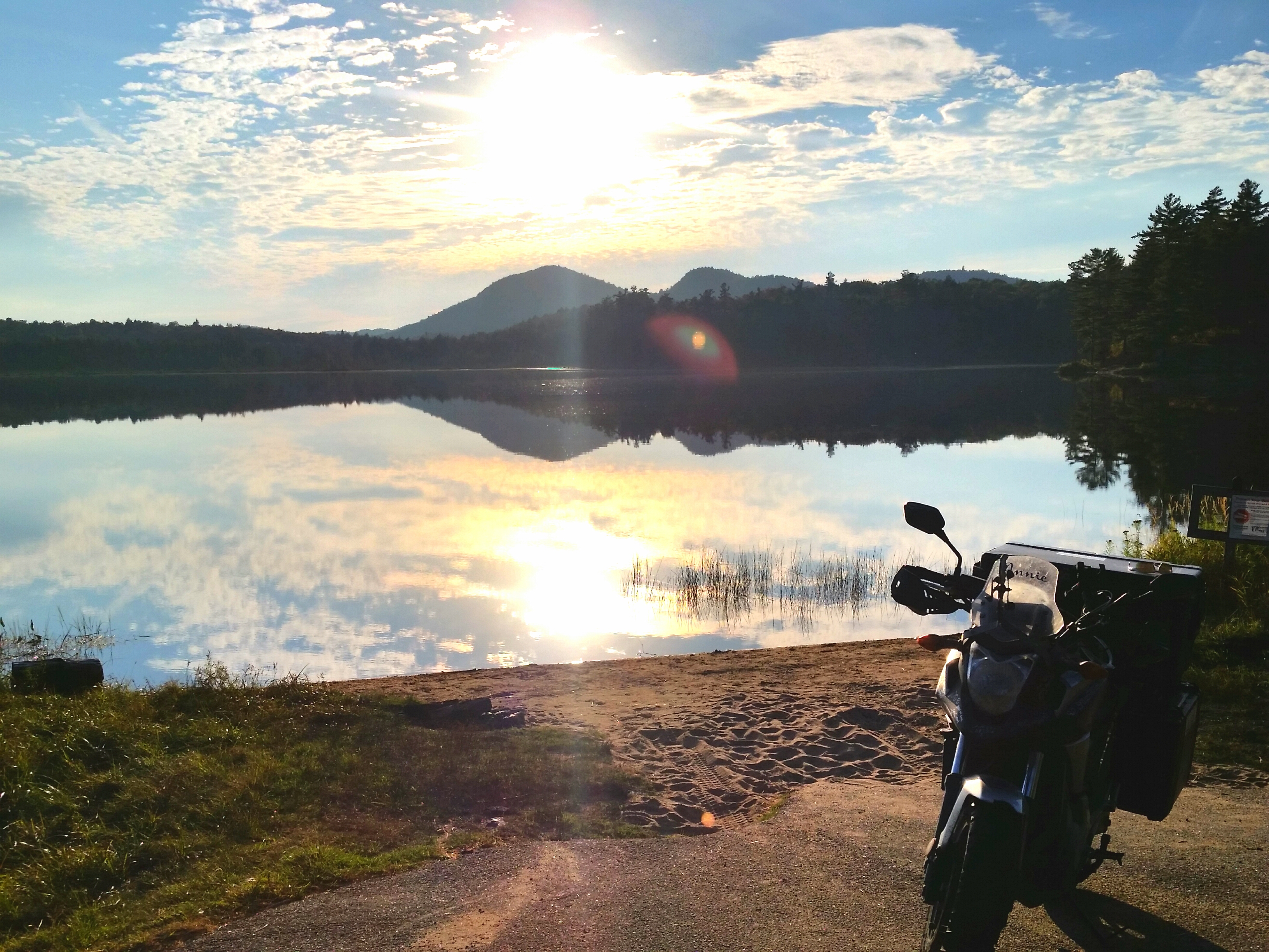 I began to round Mountain Pond, then did a triple-take when I saw the right spot for me

I was really sluggish in the morning, still struggling with my attitude. I decided to begin the day with a skinny-dip bath, which helped energize me a little bit. I sat in my hammock and worked from 8-11. (Spoiler alert, it would all be in vain!) 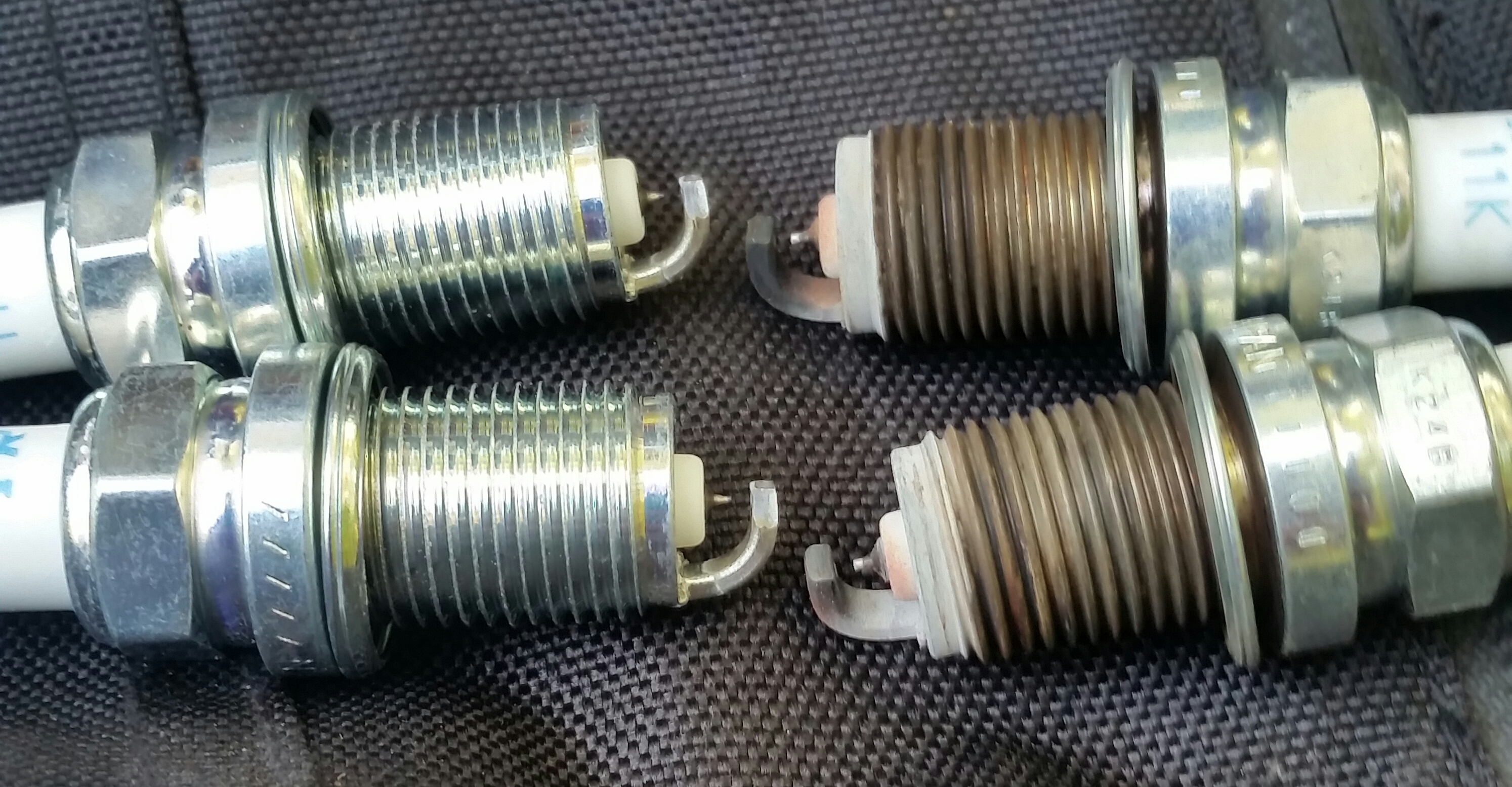 I rode down to the next larg-ish town, Watertown to try to find some wifi. Their library was spectacular in terms of scenery…. 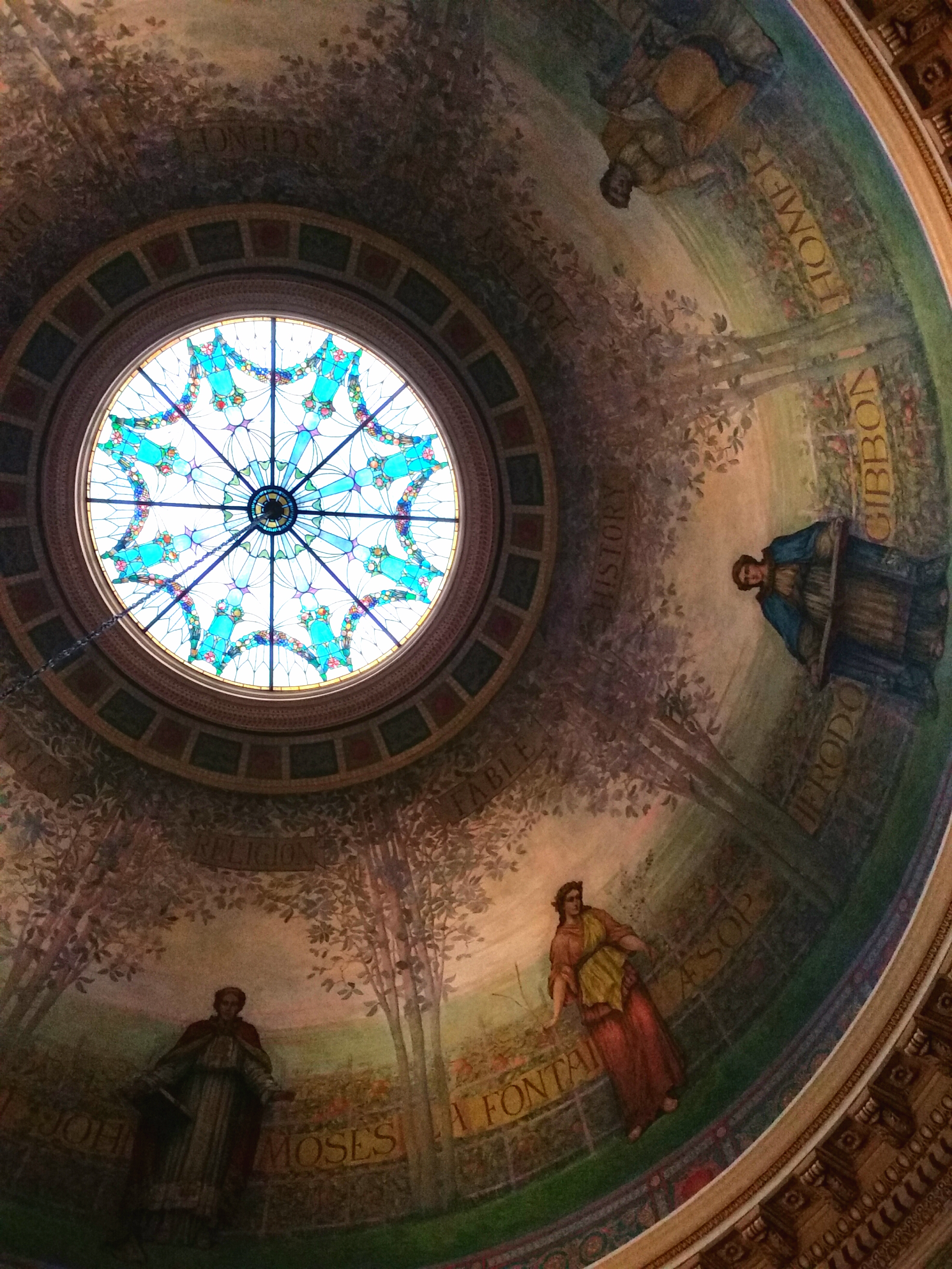 …but the internet was really tough to work with. I succeeded in getting a post out, but that was about it. I set my sights on a free campsite in the Winona State Forest and headed out.

Some trees beginning to change.

Remember how in the last TWO posts I resolved to no longer photograph giant lumberjacks? I just can’t seem to do anything right… 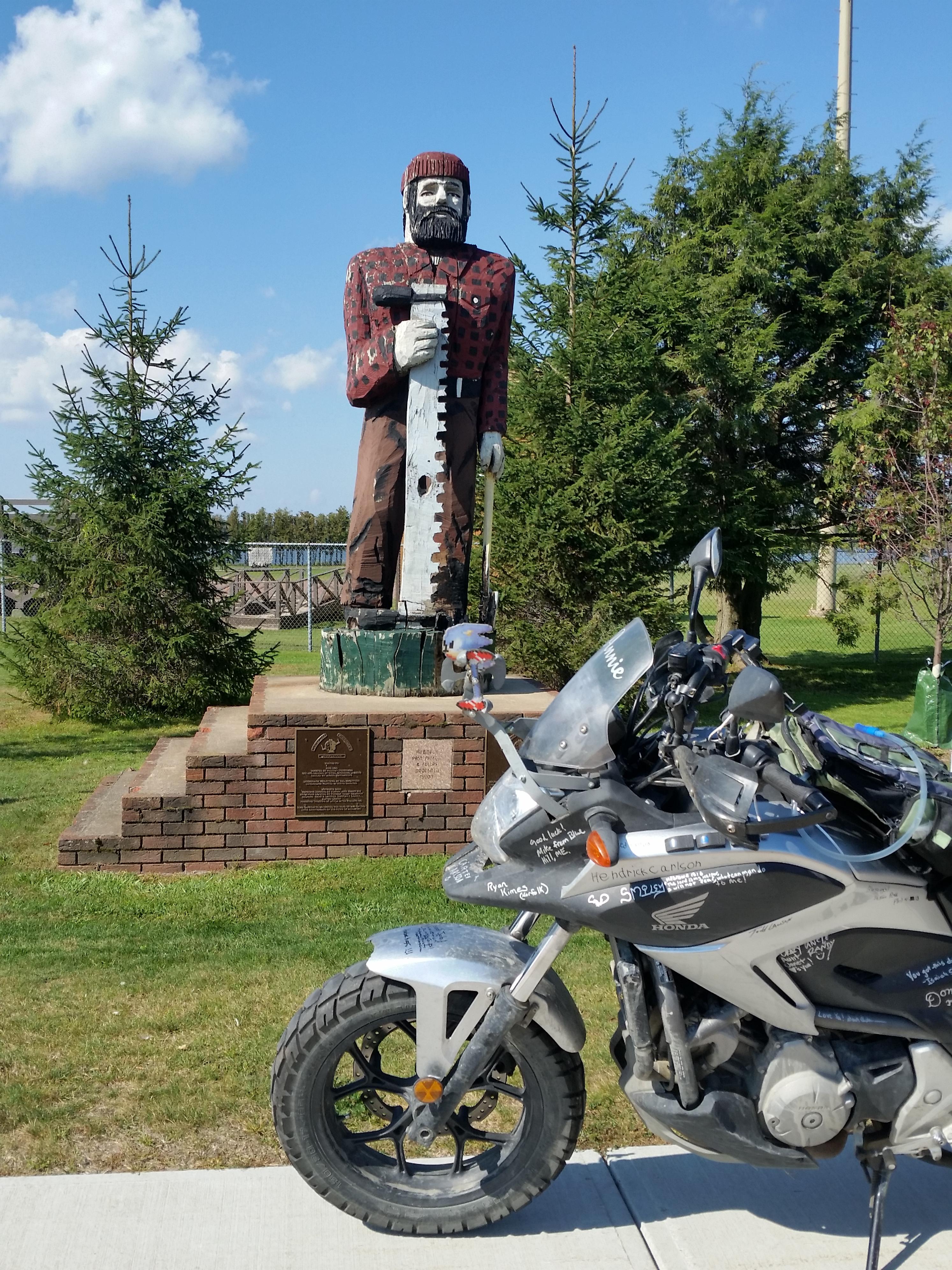 I’m not sure I ever found the official camping area, but it wasn’t for lack of trying. I eventually settled down back behind an old CCC camp.

As I settled in for the night, I realized that my three hours of work from the morning, hadn’t gotten saved. Ughhh… I was pretty low at this point.

The night was not good either. I don’t dream very often (at least I don’t remember them), but I actually dreamed I was getting killed in my tent. I woke up startled and had a hard time getting back to sleep. For the first time, I was kind of “scared of the dark.” I don’t know how else to put it. I just sort of felt surrounded by an intangible evil.

Then I had an even worse dream: That I dropped my phone and cracked the screen! First referenced in this post from the Alaska Highway, I am very proud of this seven year streak.

I woke up really early, not even intentionally, feeling like I wanted to leave the spot. I buzzed through Rochester, not feeling that I wanted to be in a big city. For some reason, I decided to continue on to the village of Brockport. This was one of my best decisions of the trip.

Brockport is a college town of about 8,000 people which is on the Erie Canal. I made a Wal Mart stop and then began a search to find some coarse ground coffee beans for my new french press. It was scheduled to make its debut in the morning. 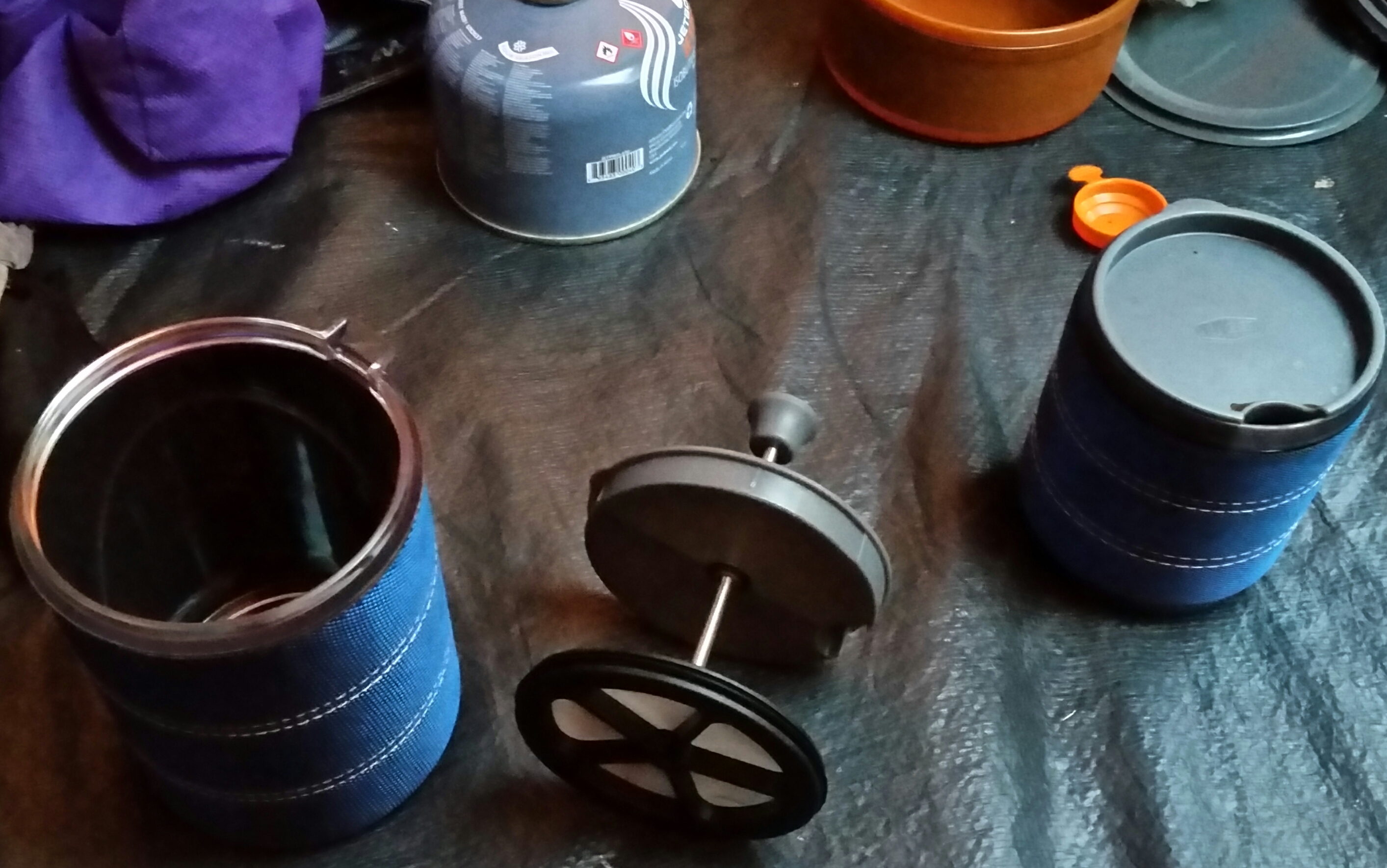 Almost immediately, I began to meet friendly people. I met a couple of fellow riders with whom I talked for about a half hour, a fellow blogger and traveller, a nice guy at a coffee shop….Eventually I made my way for the visitor center which sits right on the canal.

A lady there named Cathy gave me a bunch of great information and recommended that I camp at the next town down the canal, Holley. I could tell by the way she talked she had experience tent camping. She also told me that the library was open until 8. Nice!

Holley was just a short drive away, so I went there to set up camp. I had some initial confusion about where to set up, but I talked to the police and they set me straight. 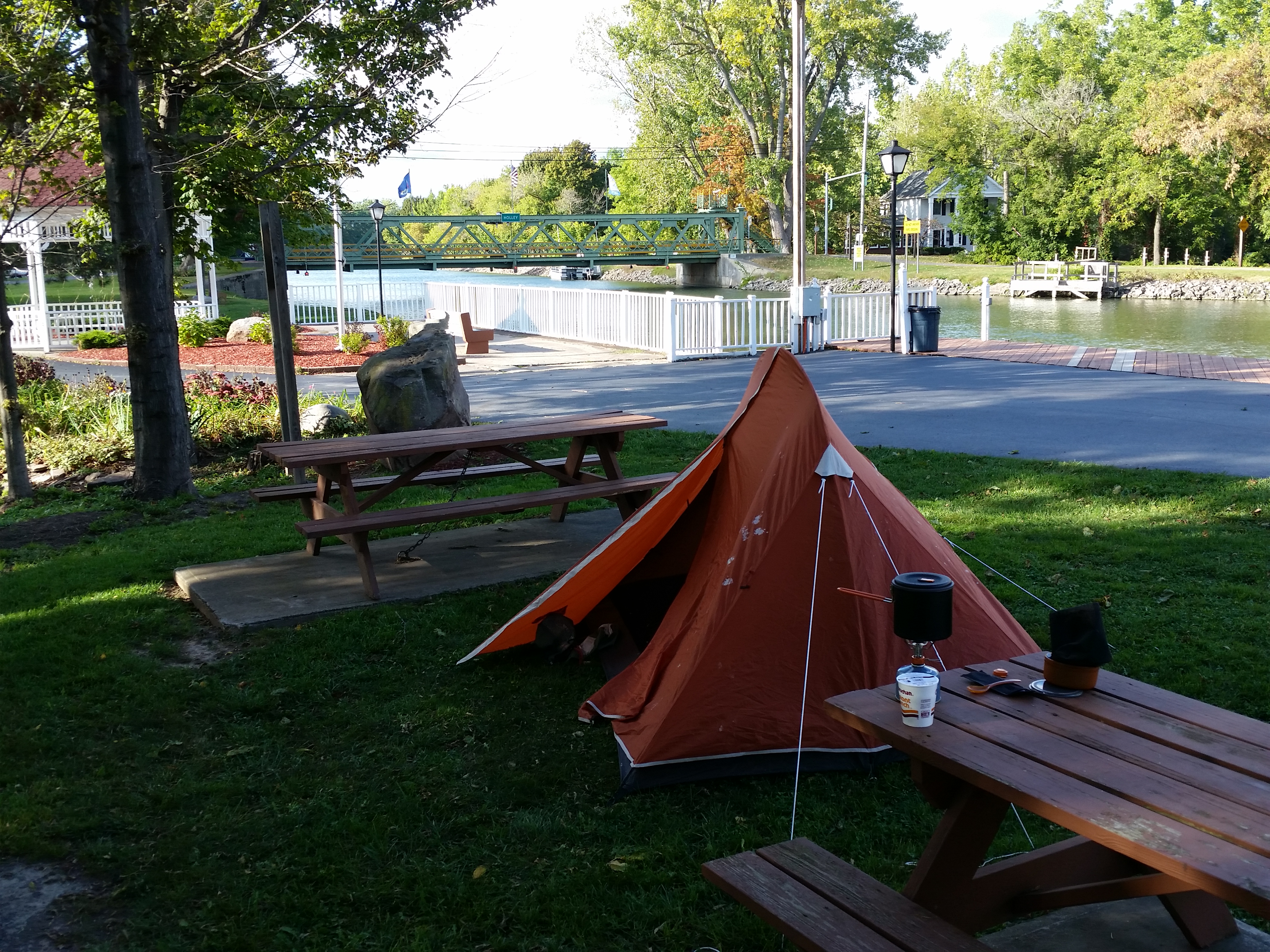 I was also given the keycode to get in the shower…all of this for free!

Free camping on the Erie Canal? With showers?! And a Wal Mart and public library with decent wifi 10 miles away!!!??? I may never leave!

It seemed like everyone I met was glad to see me, whether or not I was spending any money in their community. With my tent set up at Holley, I could now return to the Brockport library and work until closing time.

Maybe I should map them out:

I got tons of work done there, which helped put my mind at ease. The night was chilly and windy, but I got good sleep.

Suddenly I had a strange feeling come over me:

Wait a second. I am not miserable!

It felt so good to feel good! I’m not sure exactly how the corner was turned, but it was a welcome occurrence.

There were some people on a “Bike and Barge tour.” Looked fun: 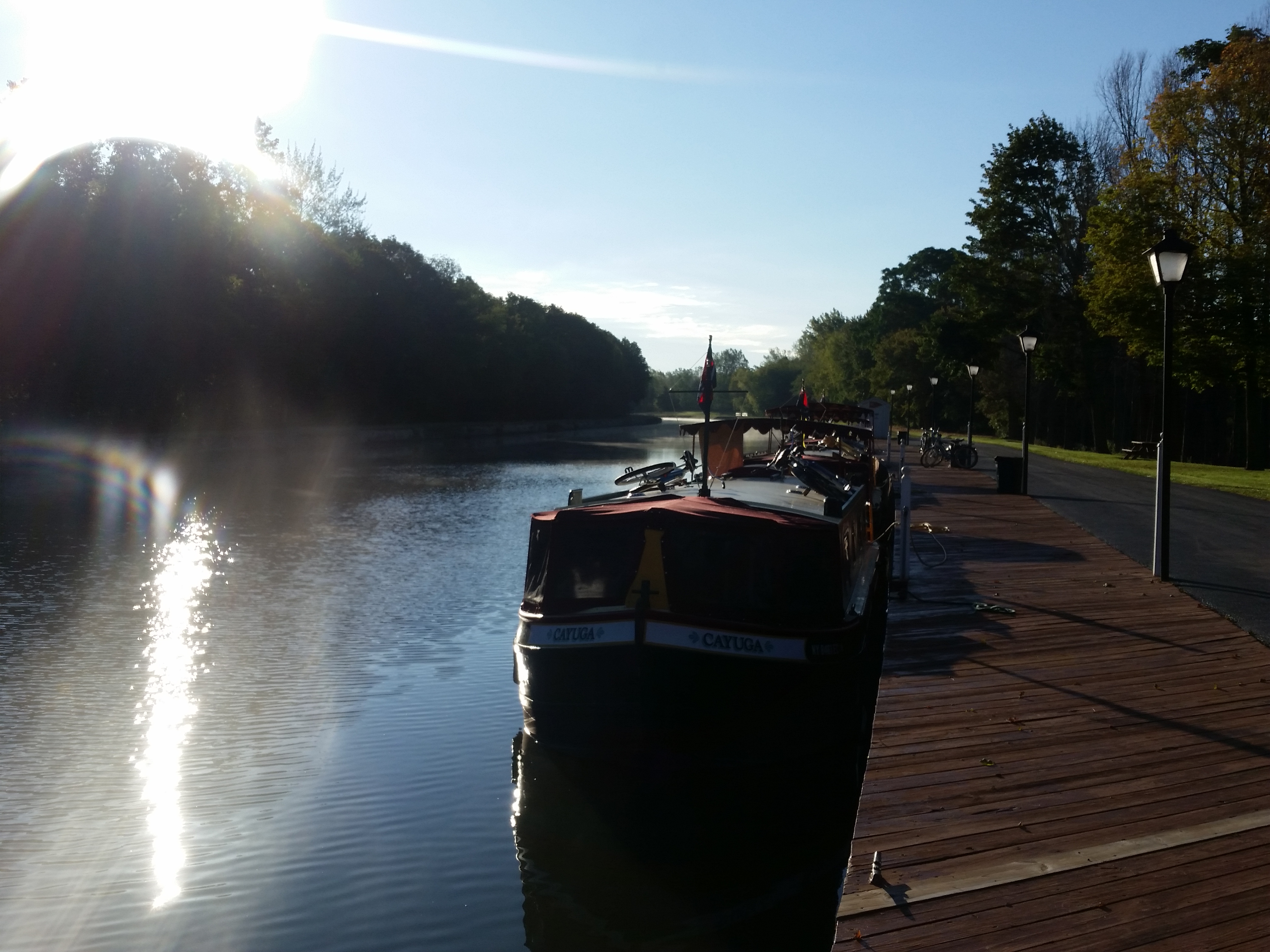 I went back to the visitor center in Brockport, since the library was yet to open. Little did I know it would be my home for the day!

I did a quick check of the wifi and found out it was very fast. I asked the volunteer if I could just hang out and work for awhile and she welcomed me gladly. The volunteers at the center work two hour shifts and I think I met four of them this day. 🙂

One of them was Mary. As I talked about my trip, she told me about some connections she has in Peru. I’m sure I will be utilizing this resource some months from now. After her shift, she returned with a lavish meal for me! 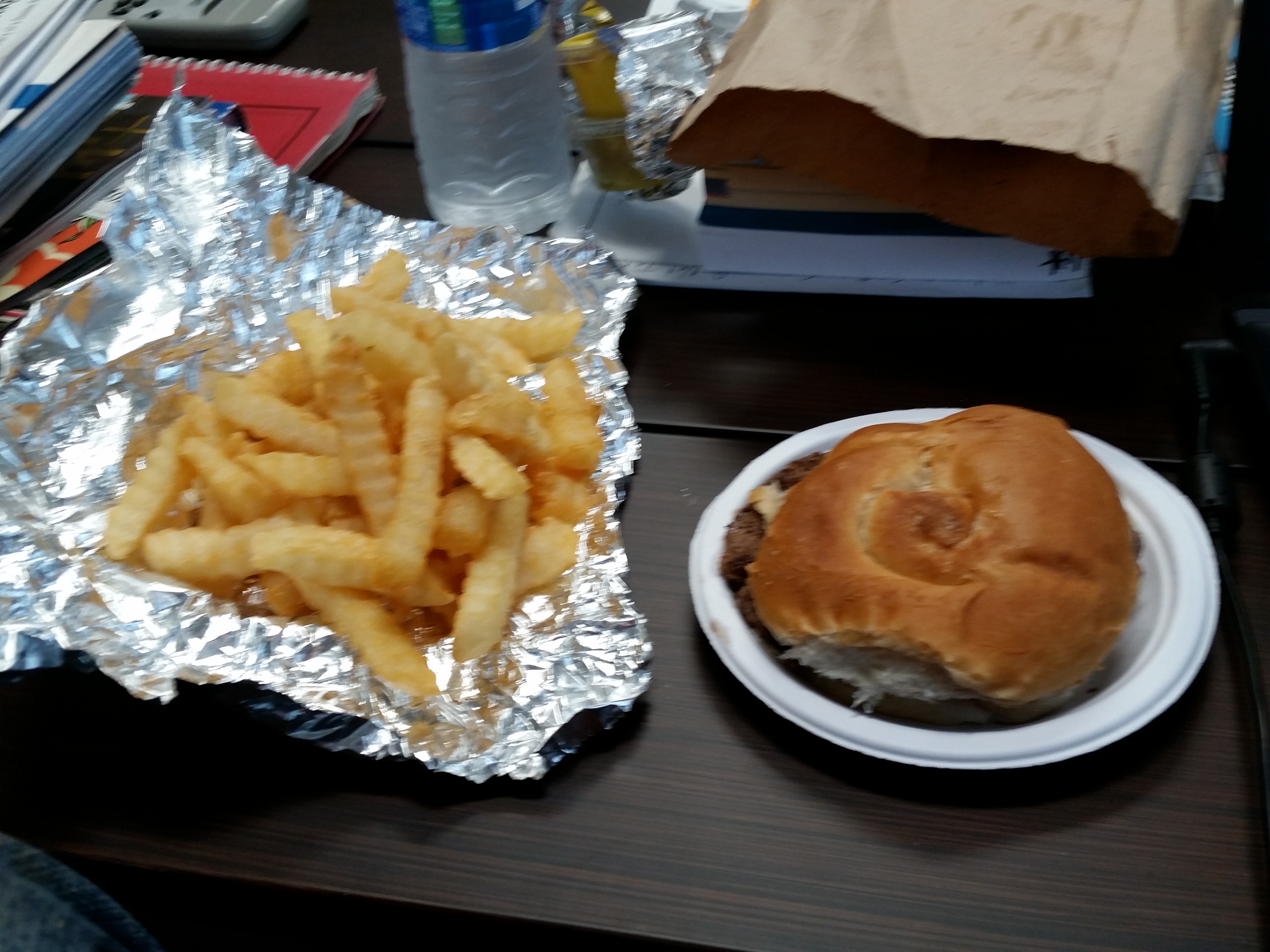 ….sorry about the graininess. My hands must have been shaking in eager anticipation. 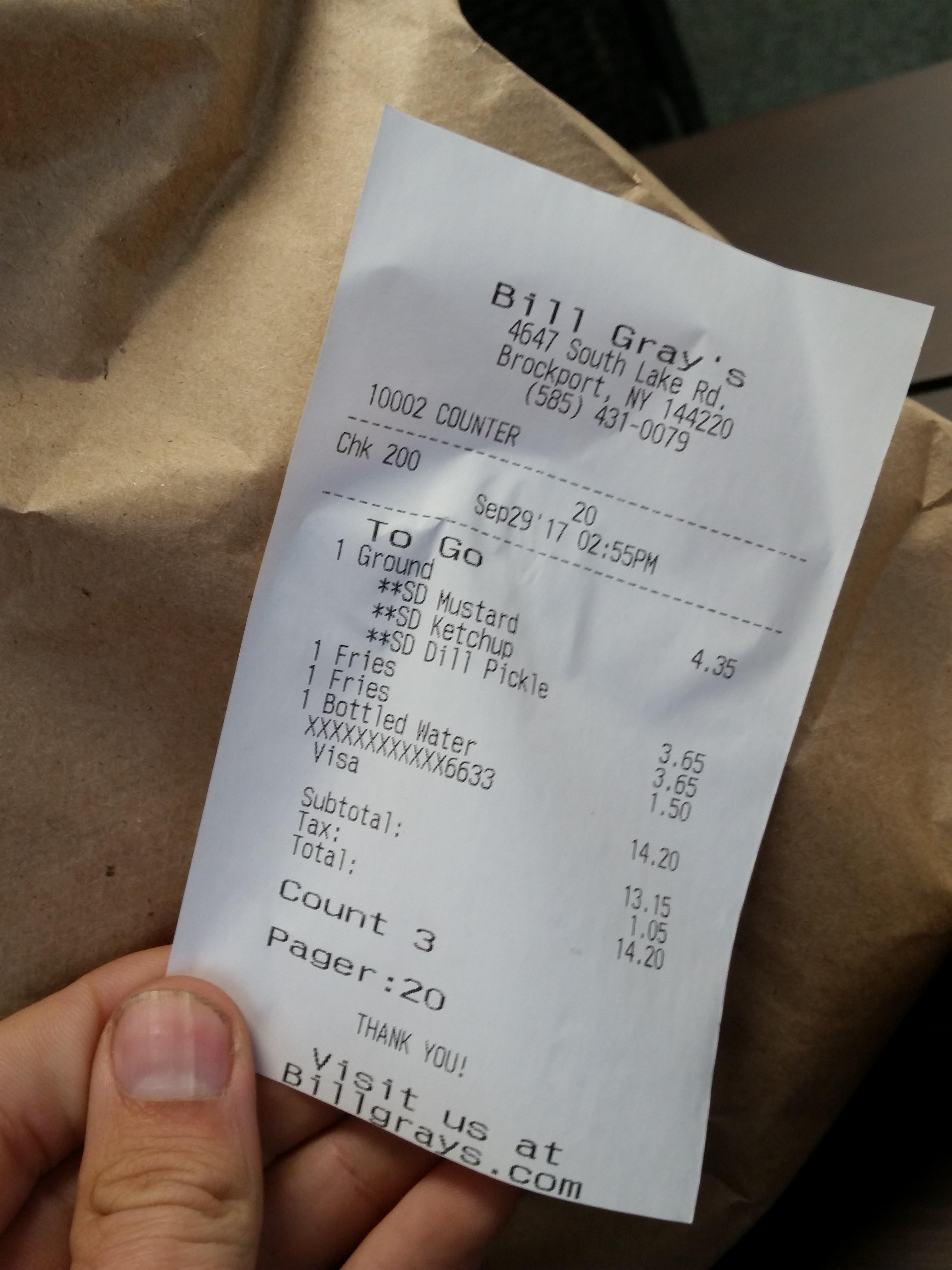 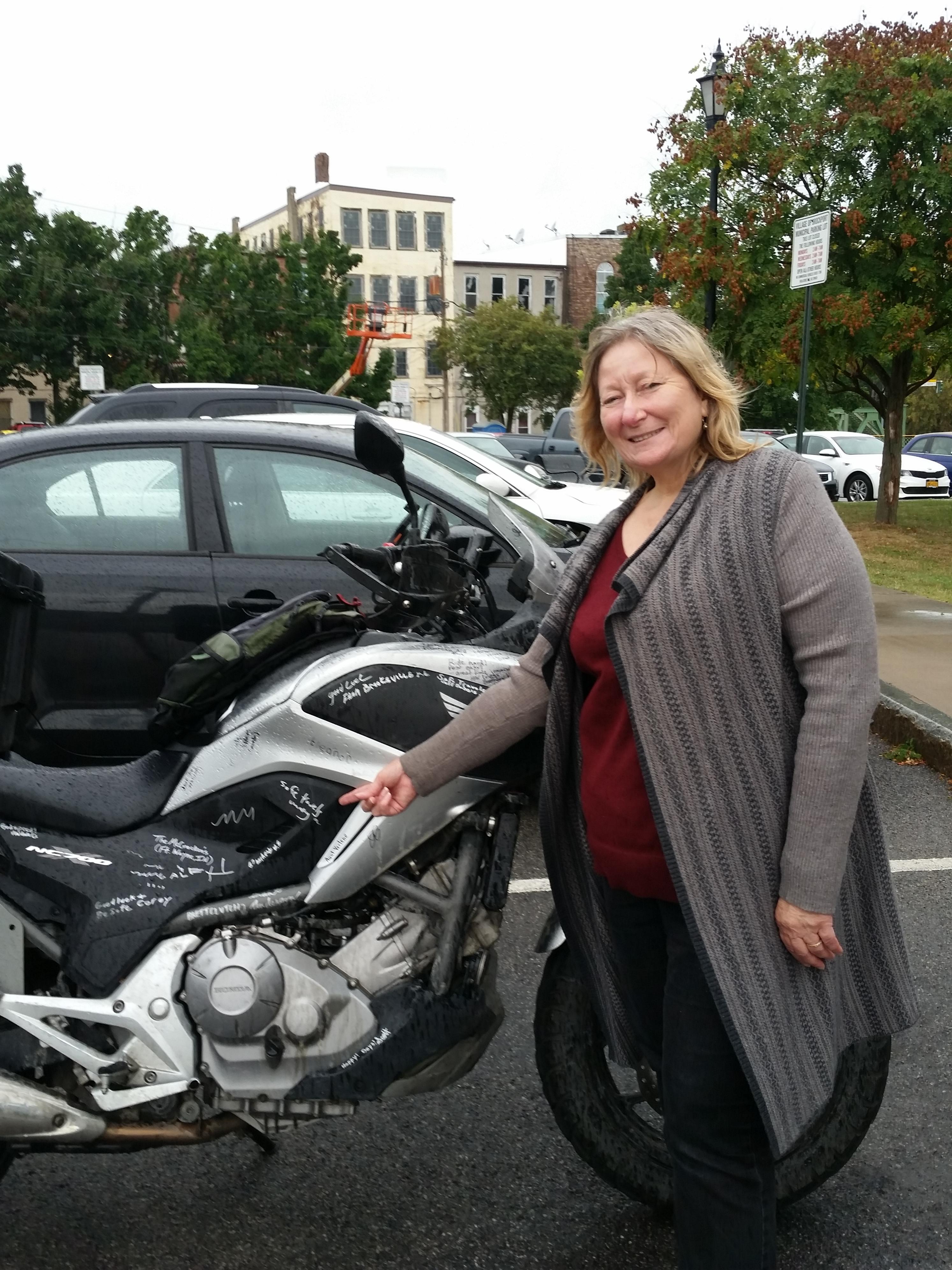 It rained pretty much all day, so I was happy to have a warm dry place to work. I also had lots of great conversations.

The Erie Canal is fascinating to me. It is so amazing that this hydro-highway was able to be completed in 1825. It completely changed the way goods were moved.

Though it had its opponents (politically especially), it was a tremendous success. It cut the cost of moving goods across New York by 95% and paid for its construction within one year.

An interesting anecdote: Many of the bridges across the canal were built low intentionally. (You know the song? “Low bridge, everybody down.”) The people constructing the roadways wanted to do all they could to mitigate the canal’s success, thus the inconvenient bridges. 🙂

Now it is mostly used for leisure. I would love to either bike or boat the whole distance someday.

The night was cold, rainy and windy; but I slept fairly well.

The people of Holley were wonderful too. I met a police officer who was checking around the grounds in the morning. I told him how much I appreciated the service the community was doing for me. I also asked him if it would be unreasonable to stay for a third night (a new tent position record!) and he welcomed me. Later, the same officer drove by saying that he had taken my compliment to the mayor. They seemed appreciative to be appreciated.

Holley was one of the lowest points that the canal needed to cross. The earth was built up around the area in order to do so. With its last update, a series of man made falls were created at a park here. 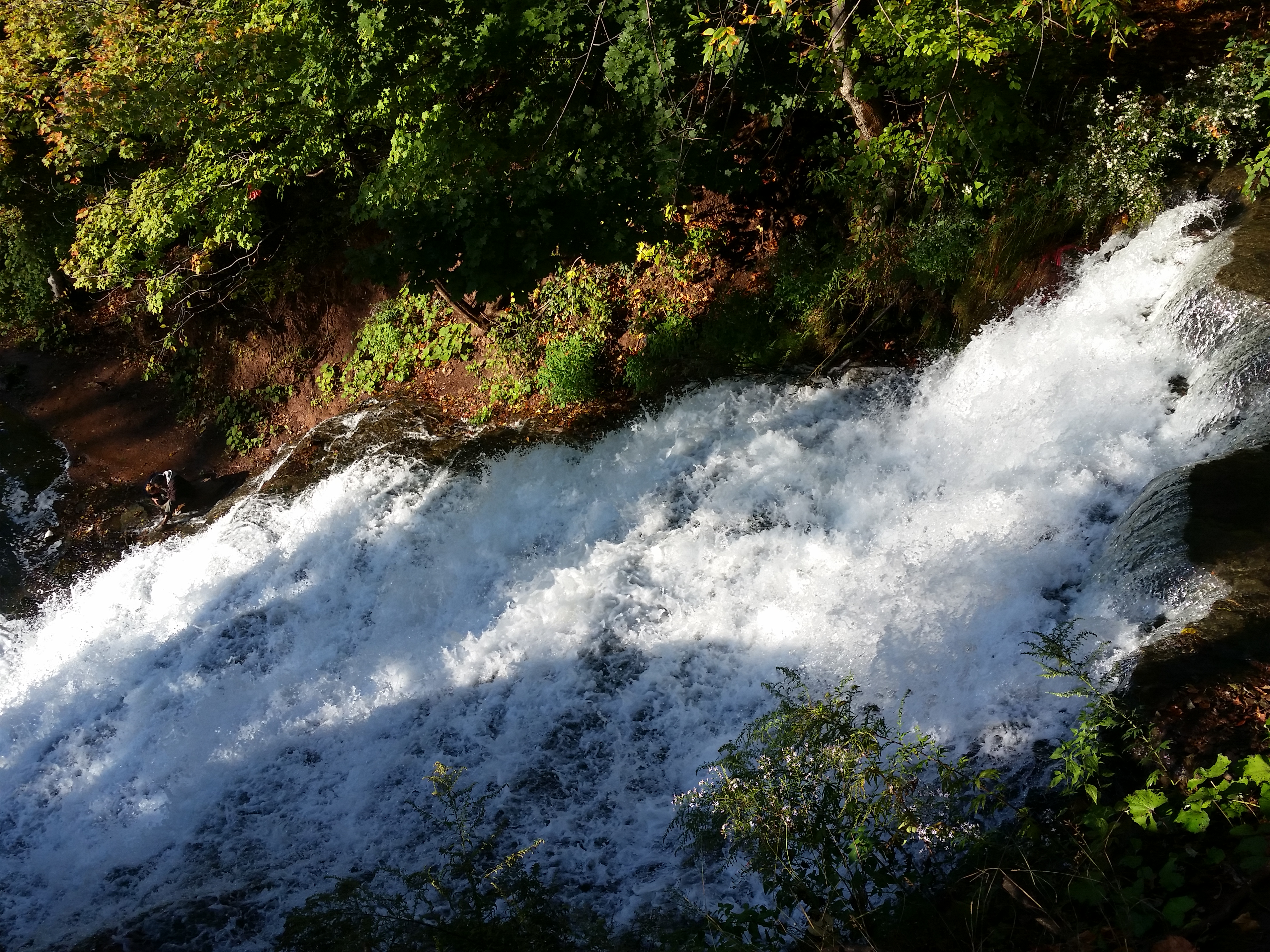 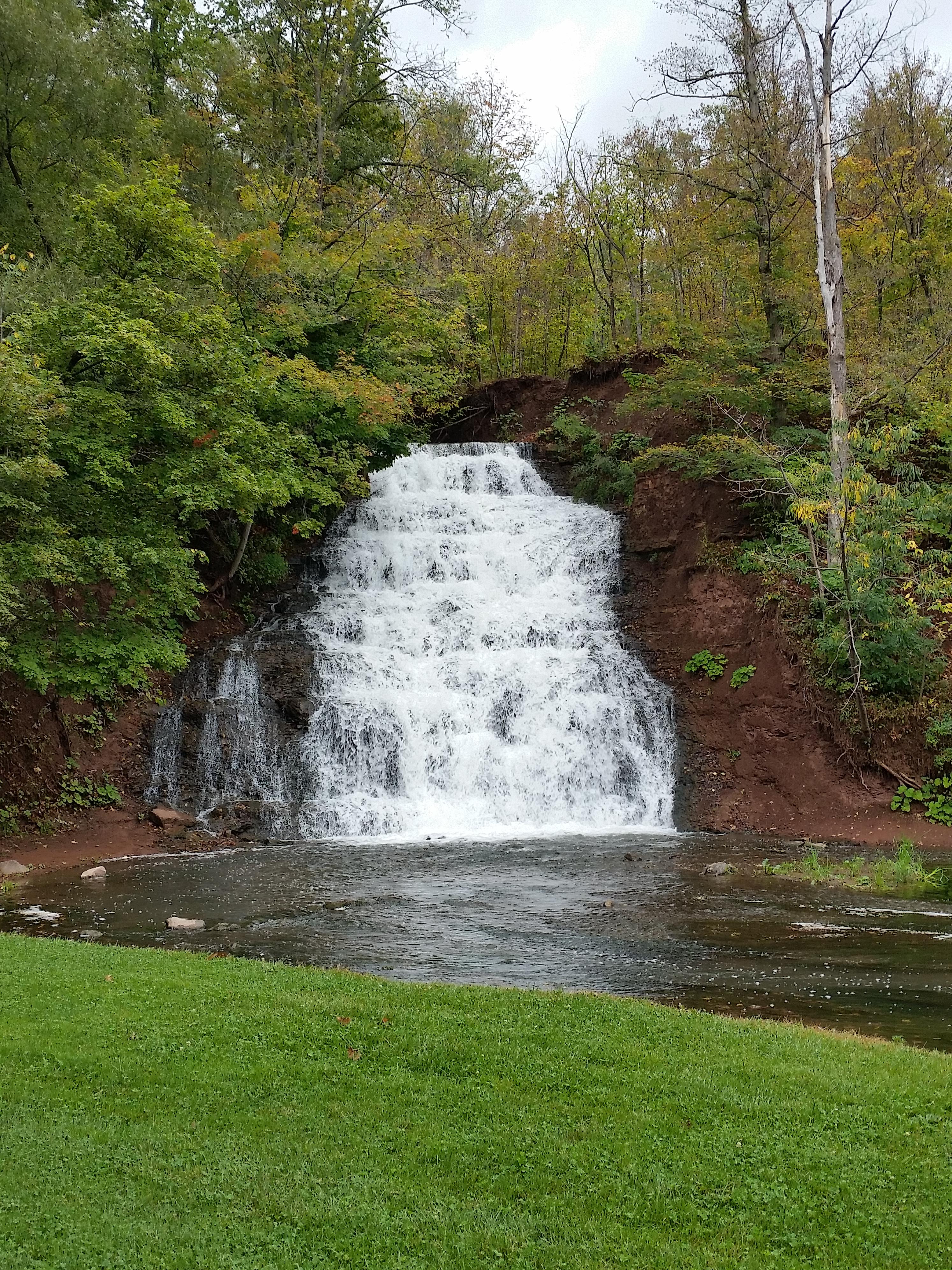 I also got to meet a groundskeeper and compliment him on his work. Seriously, this whole town was wonderful. 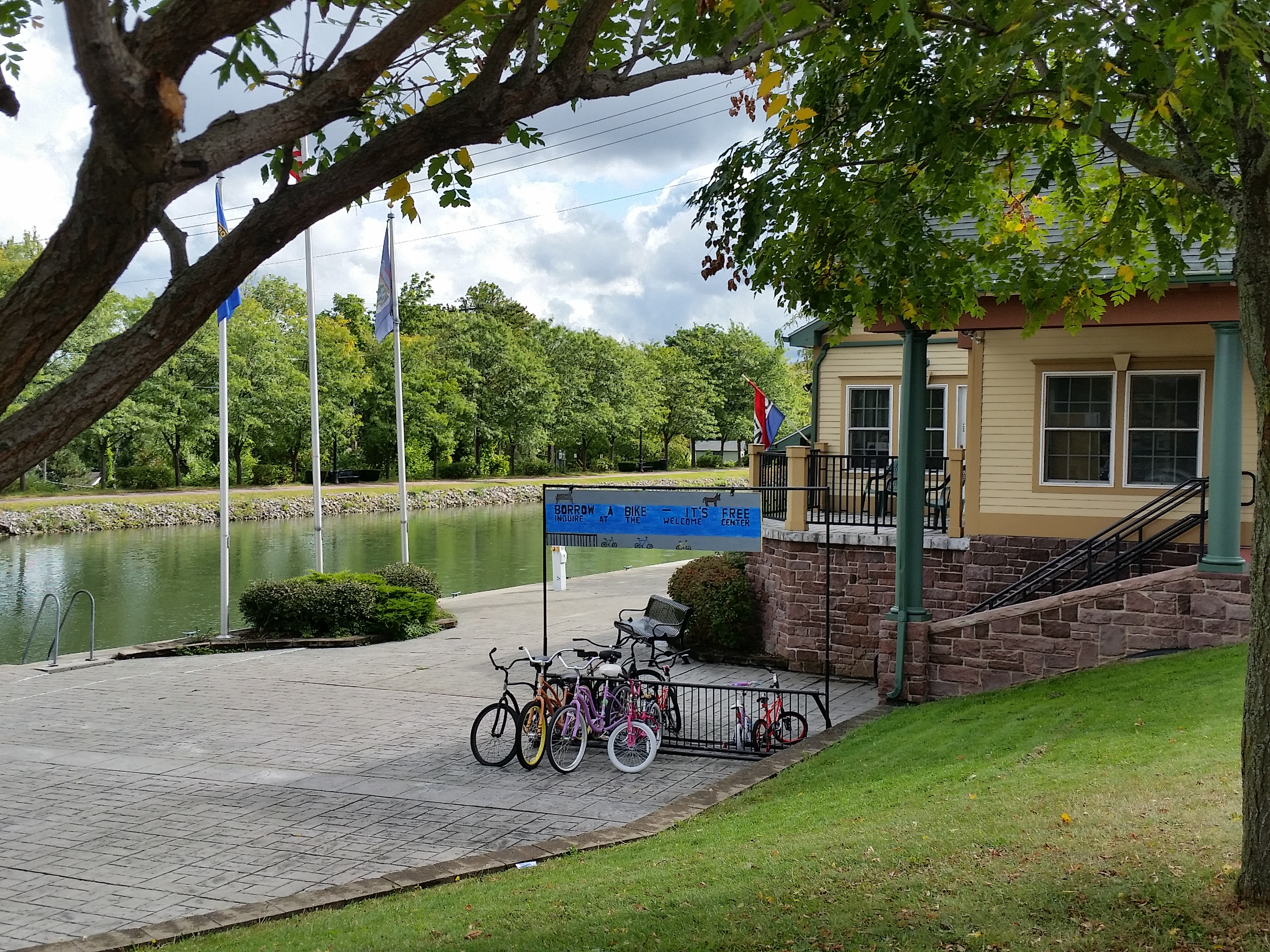 I met some more wonderful people, including sisters Geri and Marnie. Geri especially connected with me. We had multiple hugs before we parted. 🙂

I kept working and getting caught up. Feeling like I was more on top of things was extremely helpful to my mental health.

But I can’t stay forever. On this night, the forecasted low was 38 degrees. This was a wake up call that I need to get moving. The summer is running out and I still have lots to do in the northeast. 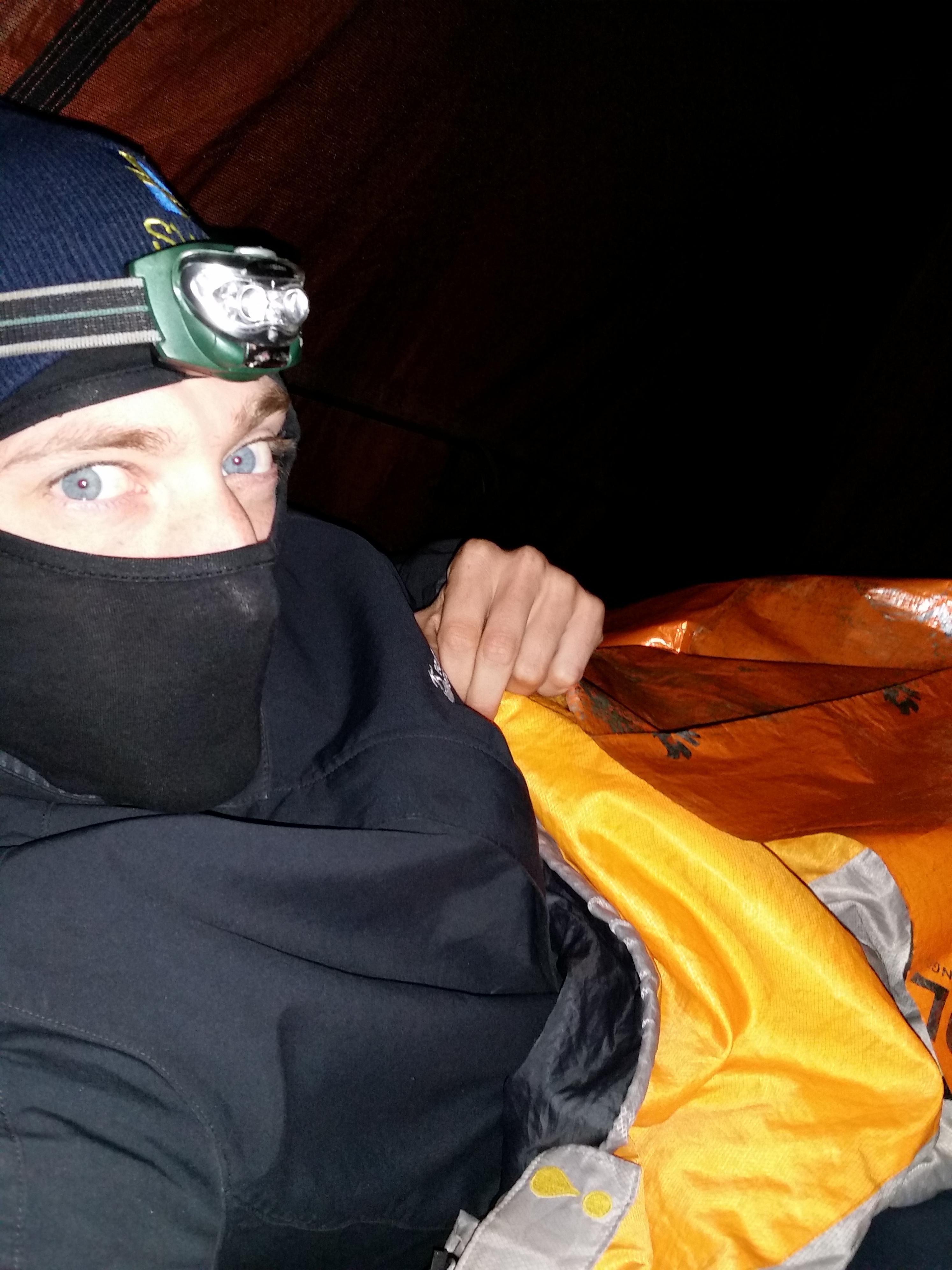 I love the people of Nebraska. They are really unmatched in my eyes. However, I almost felt like I was back in my home state over these days. Being stationary in such a wonderful place really helped lift my spirits. I can’t wait to come back and actually spend some money someday!

Realtime update: Currently in Buffalo. Doing very well! I should finish up here today and began heading east. Pittsfield, MA will be the next song place.

To my birthday niece (2 days ago): I rerouted my hydration pack’s water hose just so it would not rub off your signature. 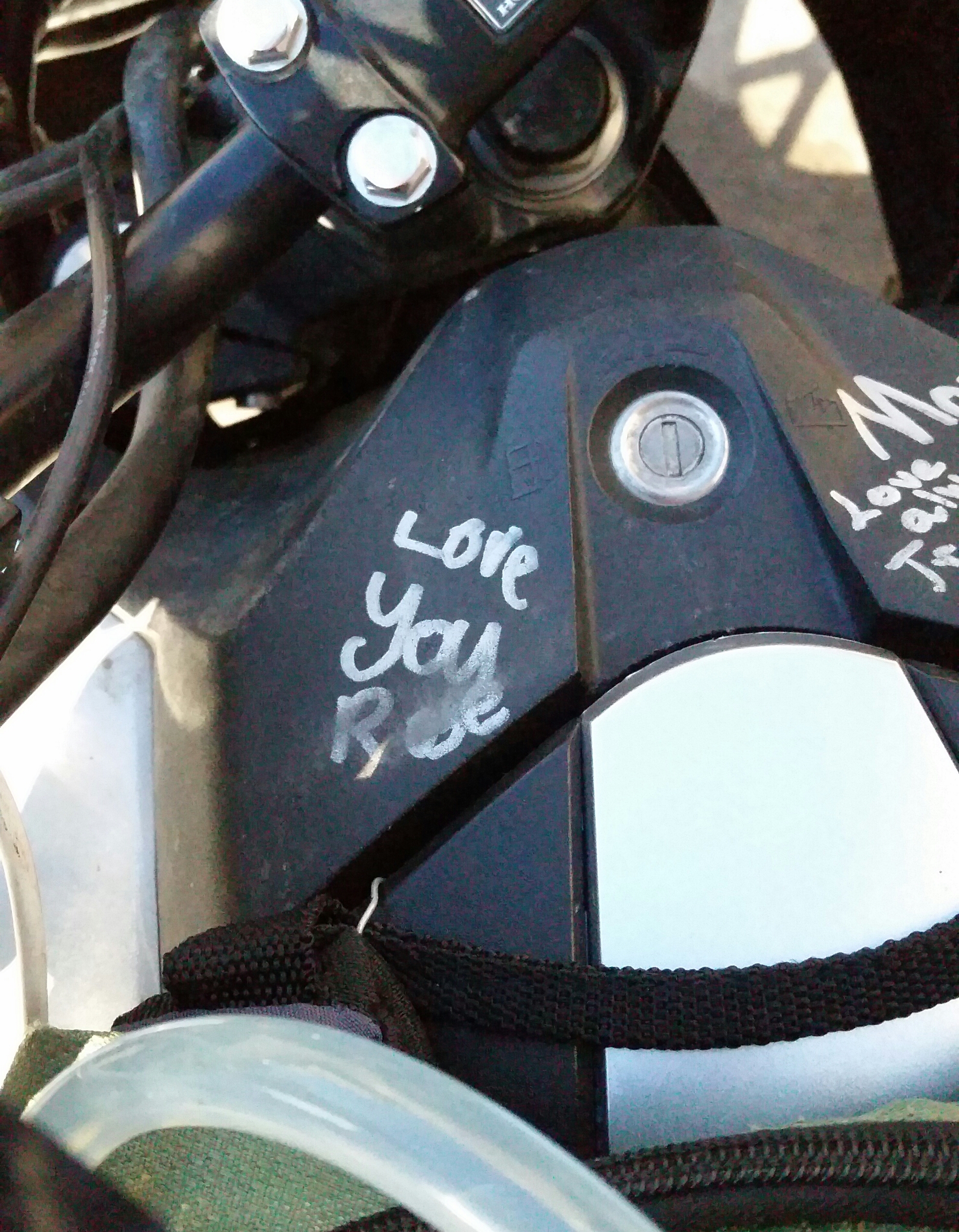 You may need to do a touch up job once I am back in Nebraska. 🙂 Hope you had a great day!