The Quebec police finally catch up with me, I try to limp along on my balding tire and I pass through four states: Maine, New Hampshire, Vermont and New York.

After I completed Waterville, it was finally time to go retrieve my new rear tire. I had already delayed a couple of times, so my tread was really low. The tire was at a shipping center in Champlain, NY, right where NY, Vermont and Quebec meet. That meant leaving Maine.

Now this may sound simple since most states have open borders, but Maine is a little different. At each state border there are armed members of the Maine National Guard standing ready. But they are not there to control what comes into the state, they control what goes out of it.

As you inch up to these checkpoints, it is always a little unnerving. You want to make sure that you are properly prepared. I’ve been to Maine before, so I know that there is only question that they will ask you as you peer down the business end of their AK-47s: “Did you have some lobstah (lobster) on your visit.” Now you can try to lie, but any sign of disingenuity will only lead to them bringing out their lobster sniffing dog.

Not only is it terribly embarrassing to have to squat to the dogs snout level and breath a steady even stream into its nostrils, the dog will not be fooled. It has been trained in crustacean detection since it was a pup. No amount of crab or crayfish will fool it. If that dog begins to bark, exposing your lie, you are in big trouble.

Whether the preceding sentences are true or not, I still felt that I should have some lobster before departing the Pine Tree State. A full cooked lobster is nice, but is a laborious task for anyone to dismantle it, especially for a Nebraskan. If lobster meat is what you crave, the “lobster roll” is a more efficient way to go. (Pretty much just lobster meat on a piece of bread.)

Furthermore, you probably don’t want to go to a sit down restaurant to get one of these. What you should look for is a porta-pottie in the parking lot and a cartoon lobster on their sign. Bingo: 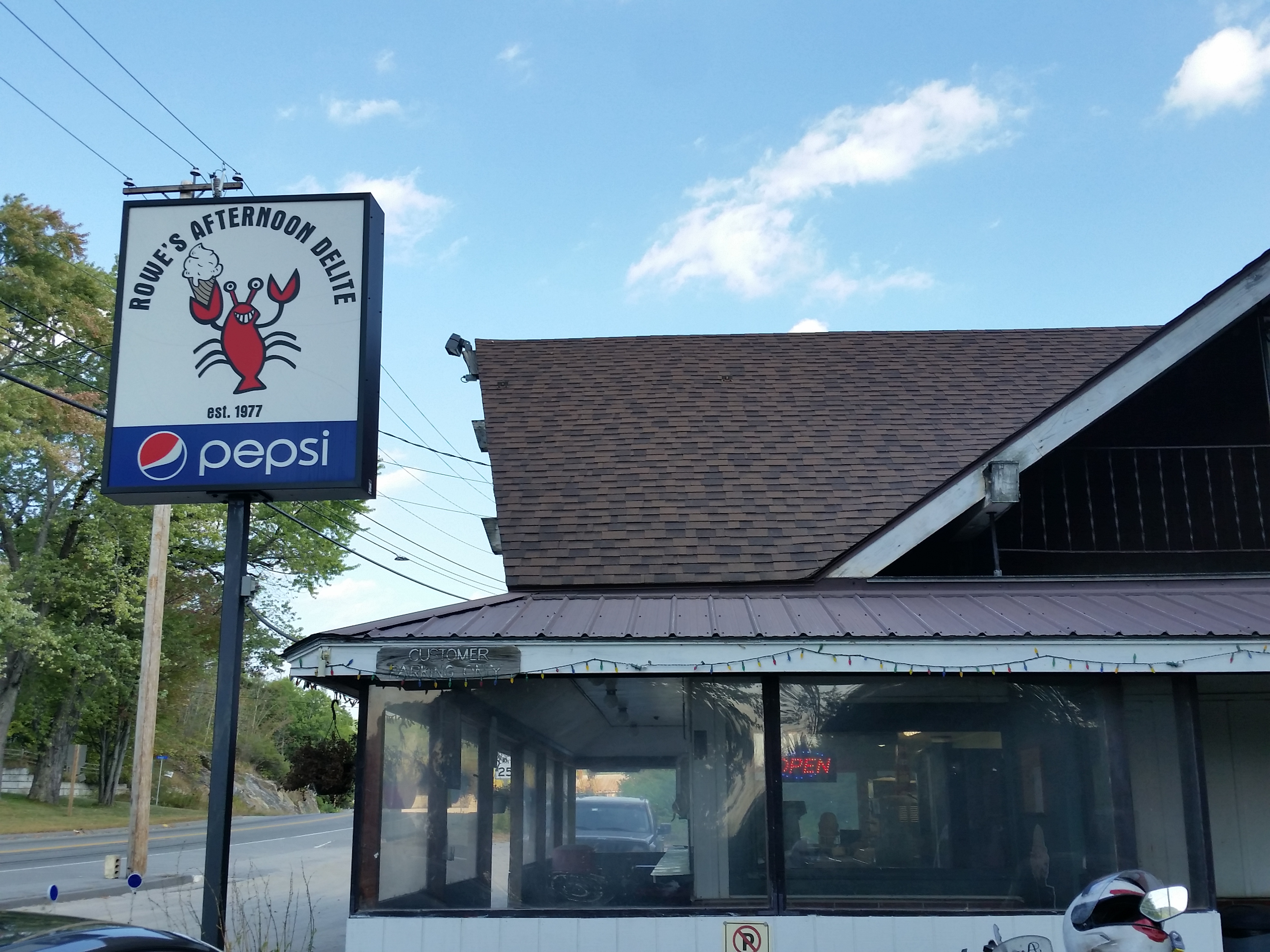 As I waited for my order, I had a very encouraging conversation with a pastor and his wife in the parking lot. I was still not doing very well this day, so I needed a little lift. 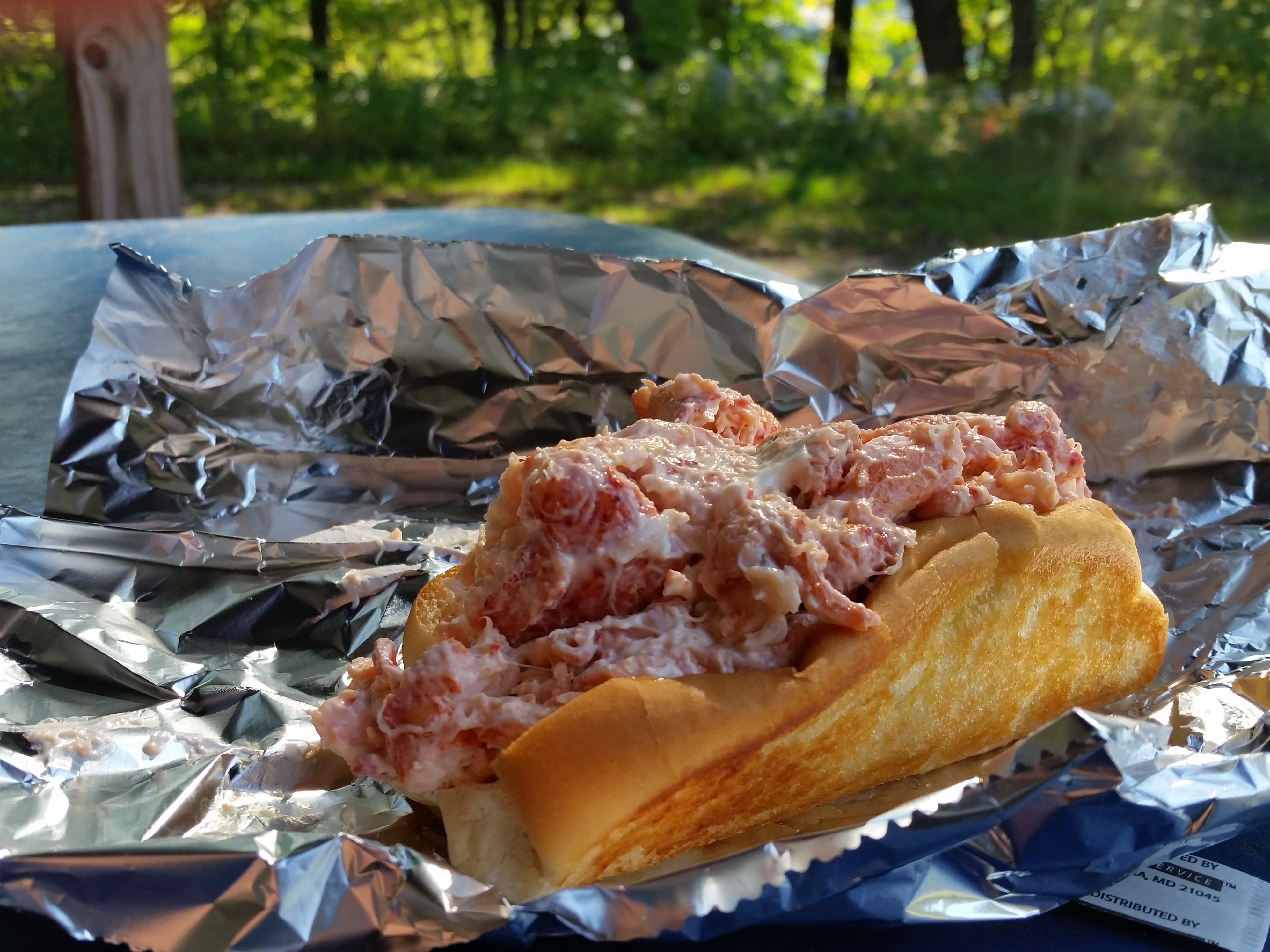 Lobster is cheaper in Maine, but still not cheap. This meal set me back $20.72, the most expensive solo meal on the trip so far. Indeed, I’m pretty sure it was my first one over $10. (The burger and fries at Bla Bla’s in Schefferville was only $8). Worth it? To avoid a harrowing border encounter, absolutely.

A group of bikers looked over Annie at a gas stop. One of them commented, shaking his head, “I’ve heard of a lot of motorcycle trips. I aint never heard of no trip like this before.” His Harley had 190,000 miles on it, so I took this as quite a compliment. 🙂

Remember how in my last post I swore off of taking pictures of anymore giant lumberjacks? Sobriety’s tough, man. This is definitely the last one. 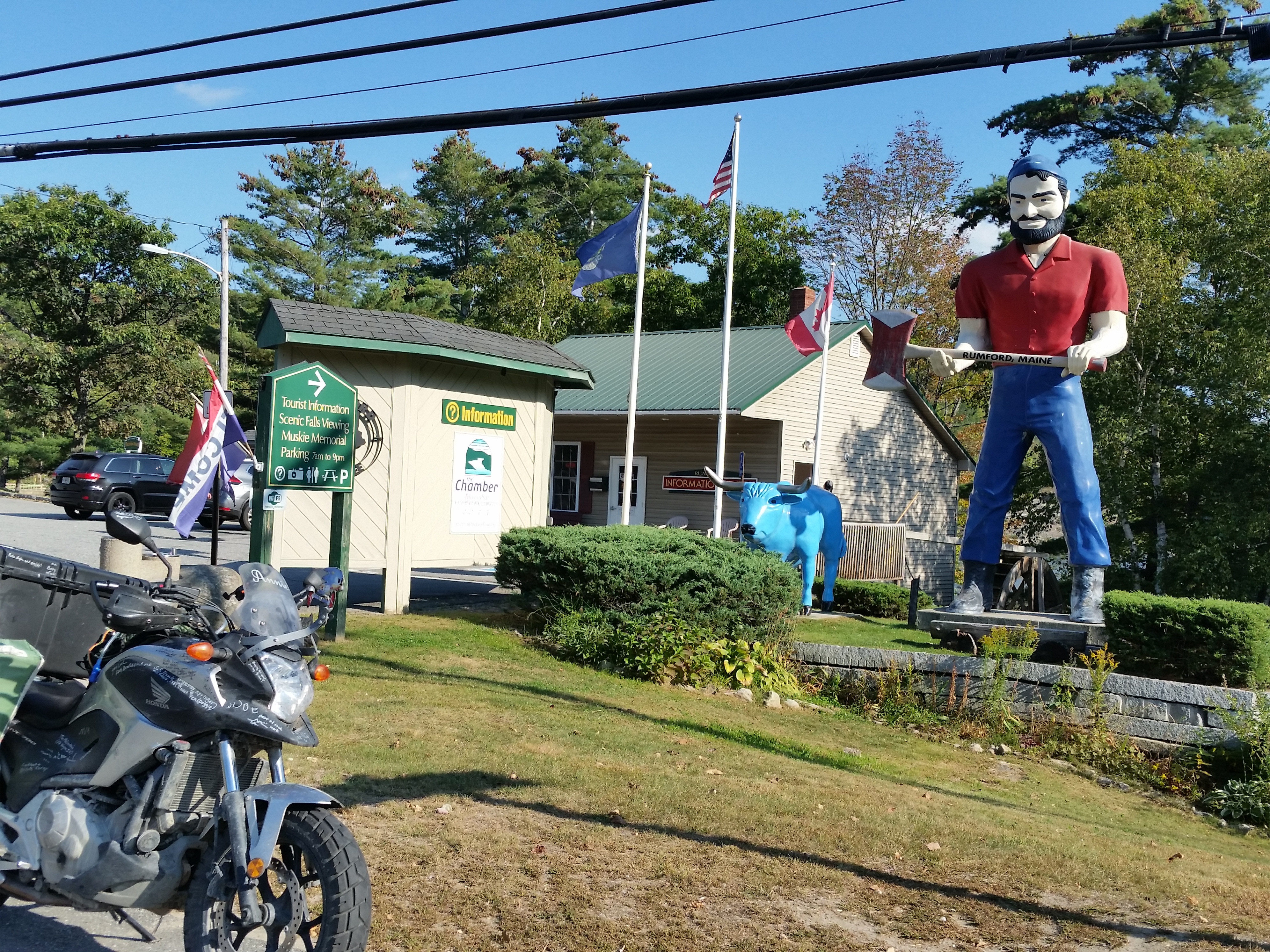 I was entering what might be the best place in the eastern US to find free campsites. Western Maine, New Hampshire, Vermont, upstate New York; all have lots of national and state forests which will usually have some free camping sites. No amenities, of course, and bear precautions are wise, but actually having a choice of free sites is a real luxury. Fun roads too:

I chose one along a stream in the White Mountain National Forest, just on the Maine side of the Maine/New Hampshire border. It was a nice place. 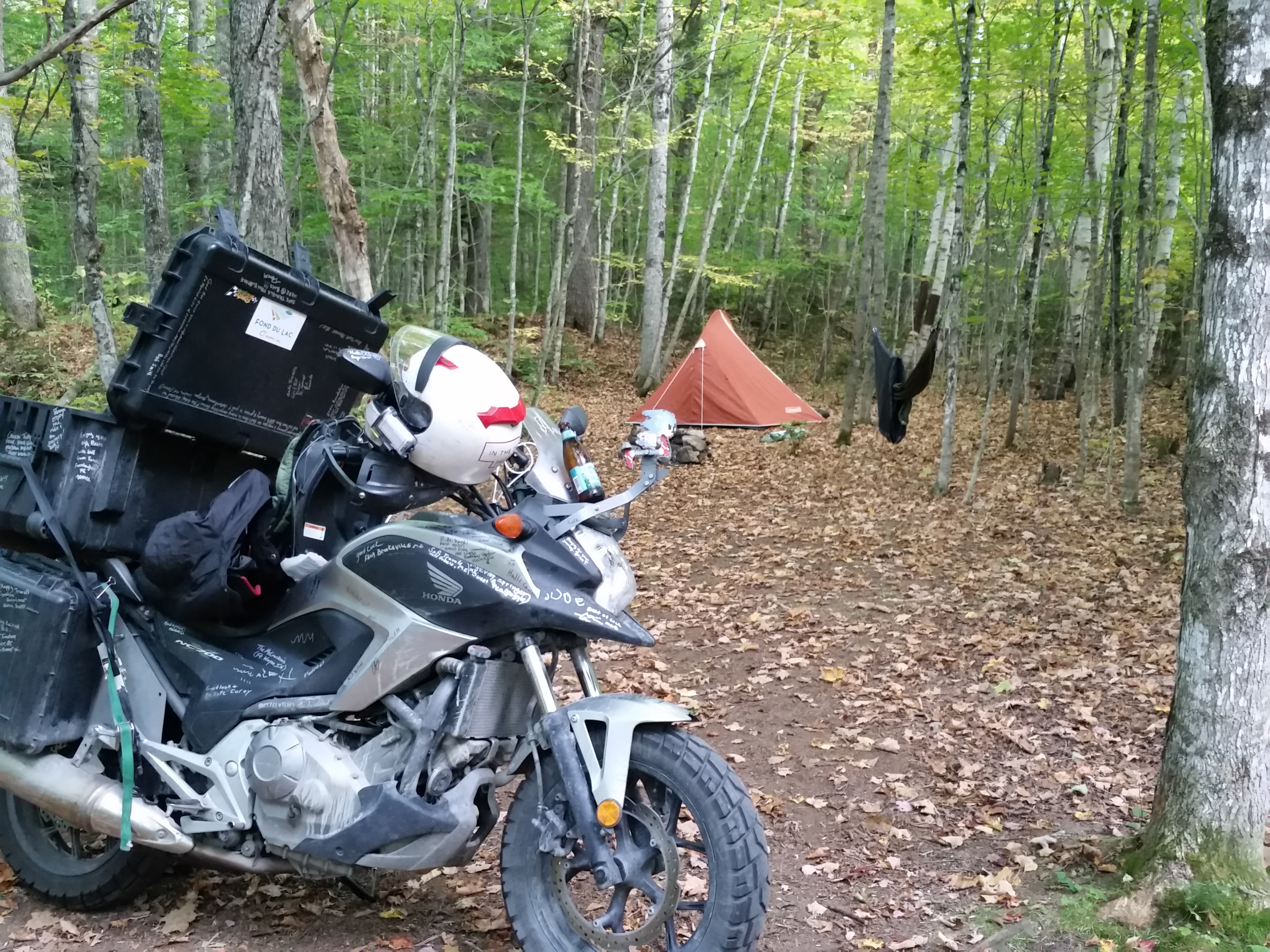 I’ve been setting up my hammock most nights to give me a place to type before it gets dark. Also, I want to practice set up since I think I will need the hammock in the more populated areas.

I still had a beer left from my new friend, Mark, in Maine. Unfortunately, it had been 90 degrees that day (unseasonably warm for New England) so it was far from cold. Hmmmm….let’s use nature’s refrigerator! 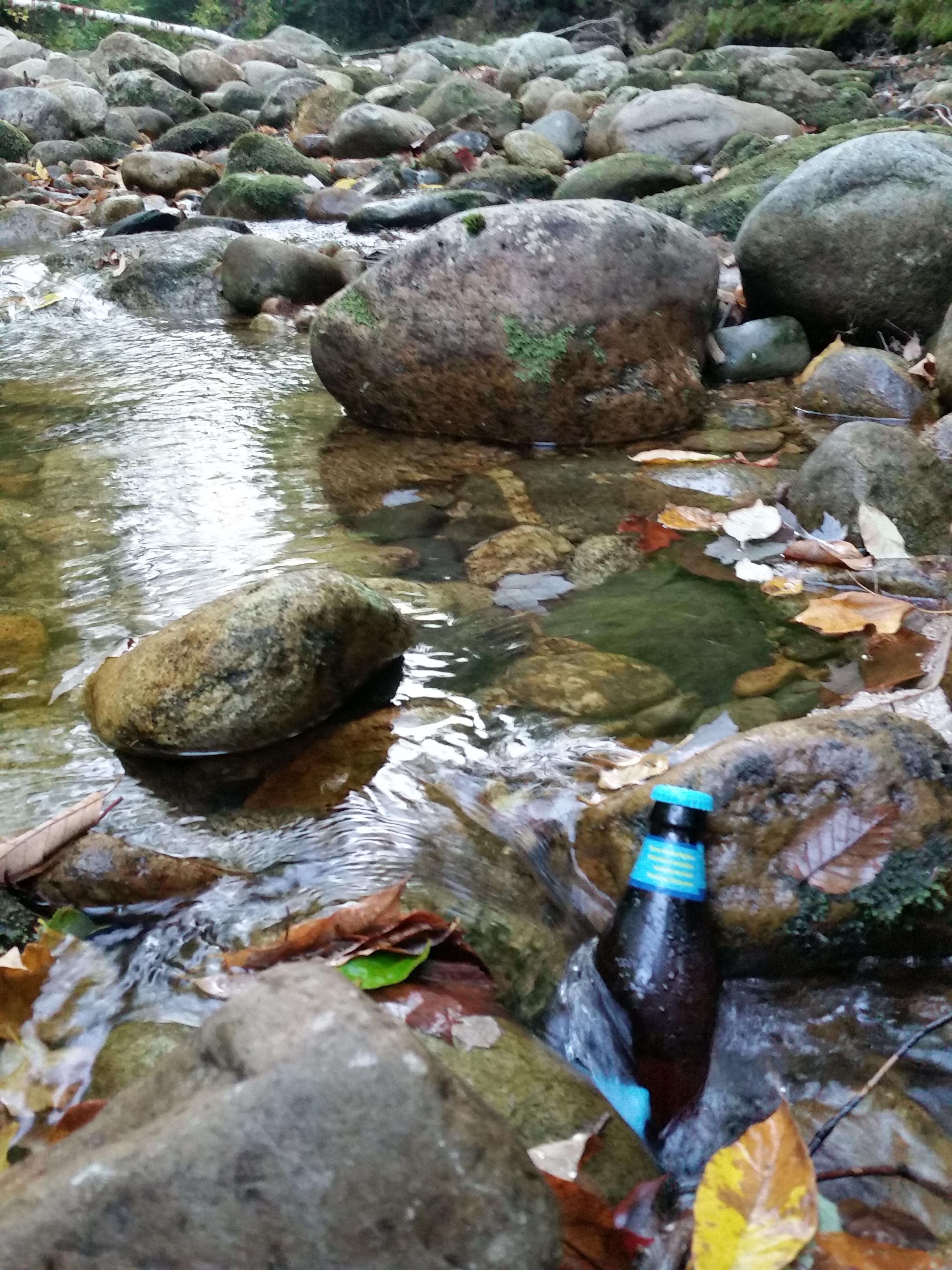 It was pretty well chilled after about 90 minutes.

Though I was still not in the best spirits, this had been a great day. Bangor, Waterville, lobster, multiple Paul Bunyans. What more could one ask for?

Time to do the Kanc!

No that’s not the latest dance move (yet). The Kancamagus highway is a well known scenic drive through the White Mountains. My plan was to get up early and be on the road by sunrise. I thought the road would be fairly free of impediments at that time in the morning. Think about it: Have you ever seen an RV on the road before 7 am? (One caveat: If there is a Denny’s nearby, all bets are off.)

My plan was pretty good. I packed up early and began to wind through the White Mountains. 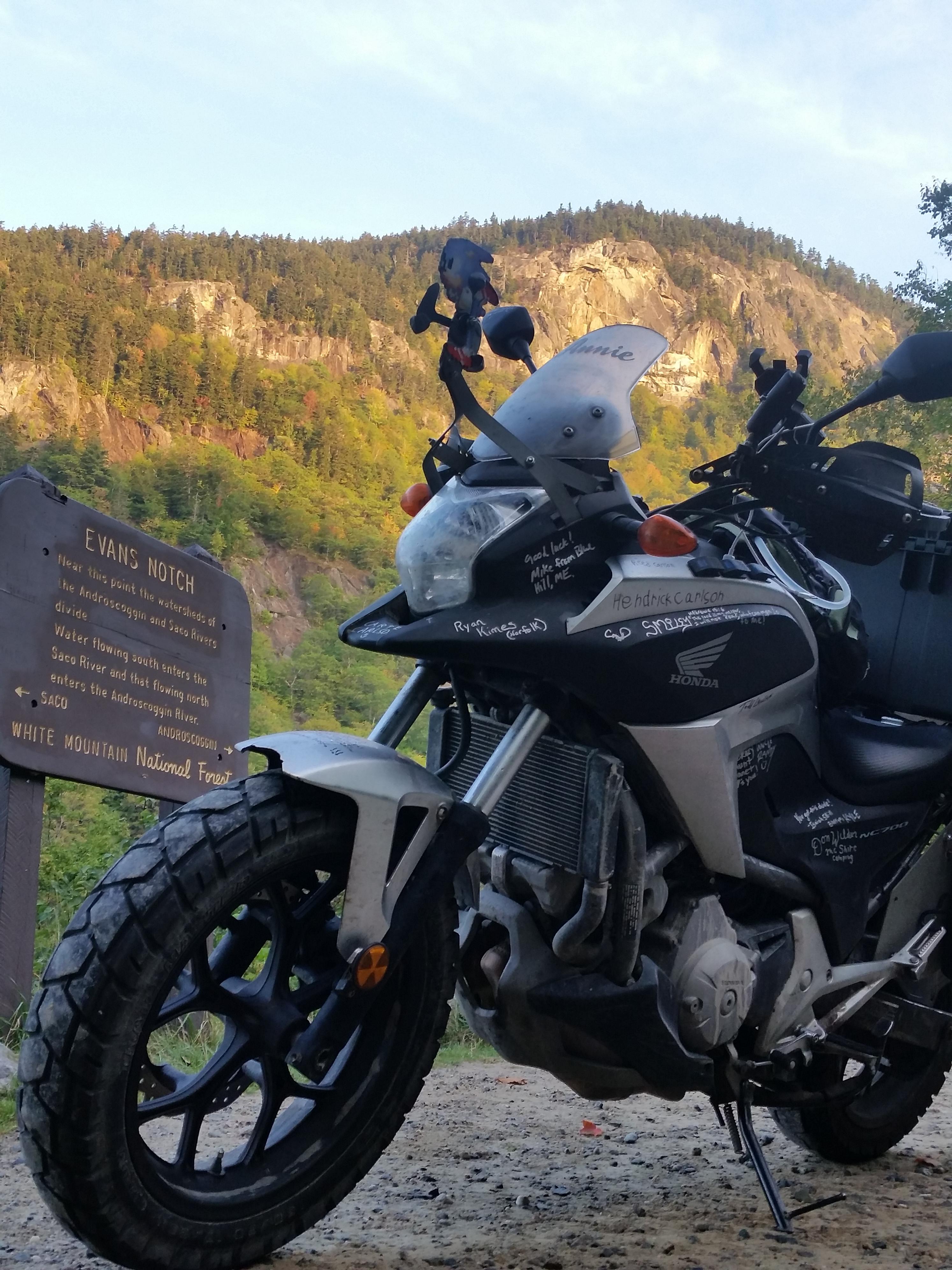 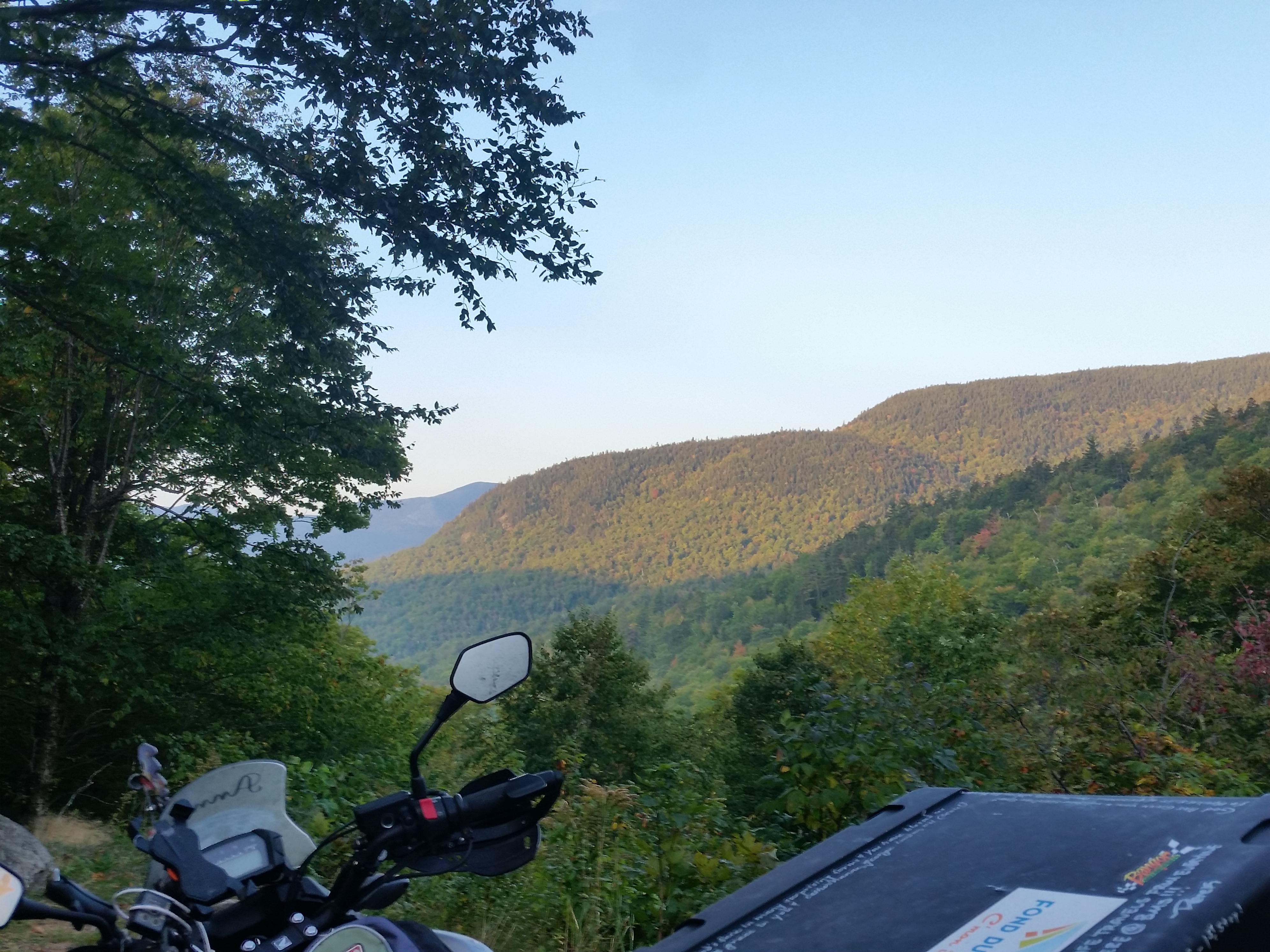 Conditions were great early on, but some fog began to roll in. However, the fog allowed me to get the following picture, one of my favorites of the trip so far: 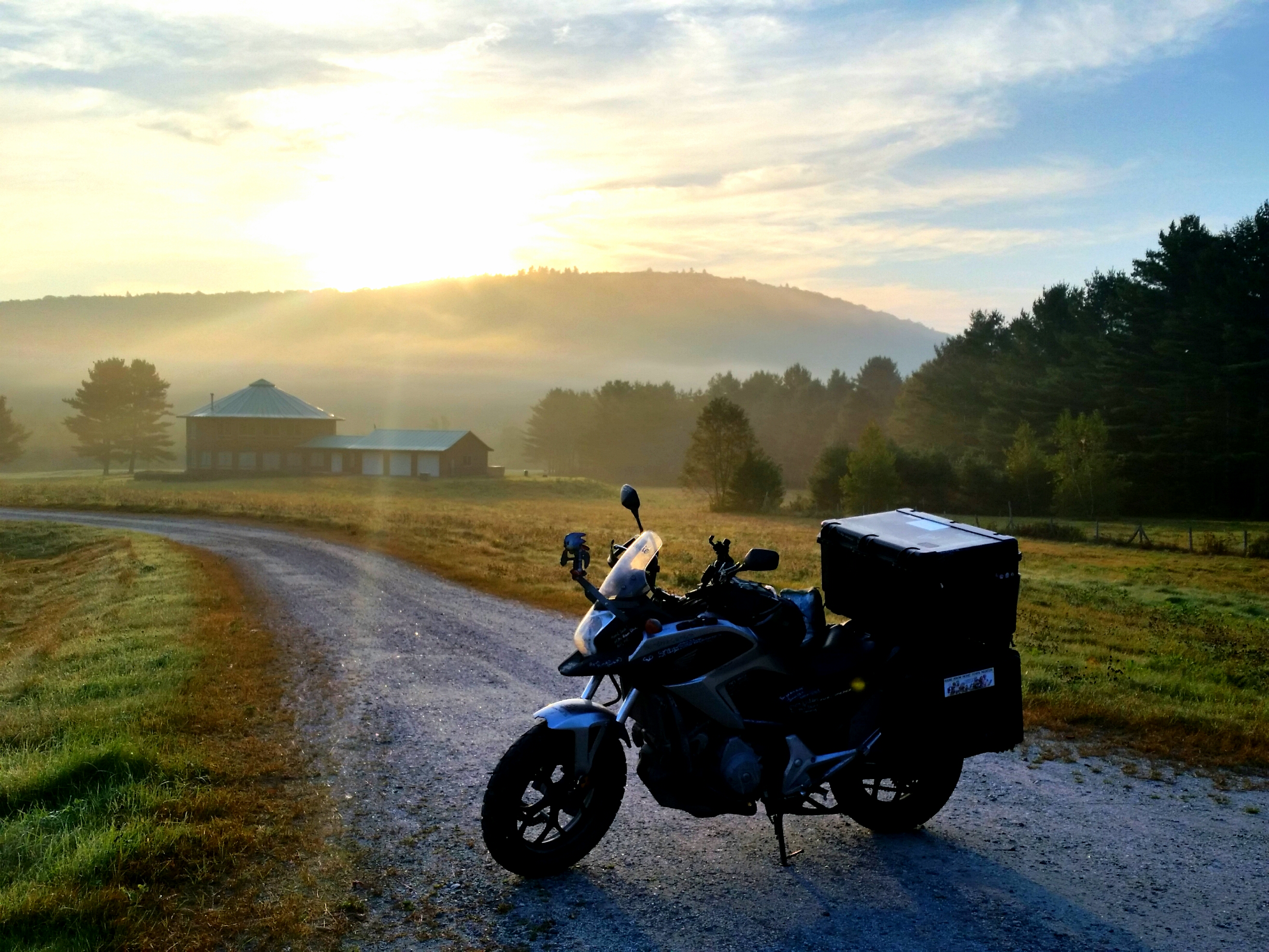 I got a little backed up in some morning traffic, but was on the Kanc before 8am. I pretty much had it to myself. It is not prime leaf season here yet, so that probably helped.

There were some nice views on the way. 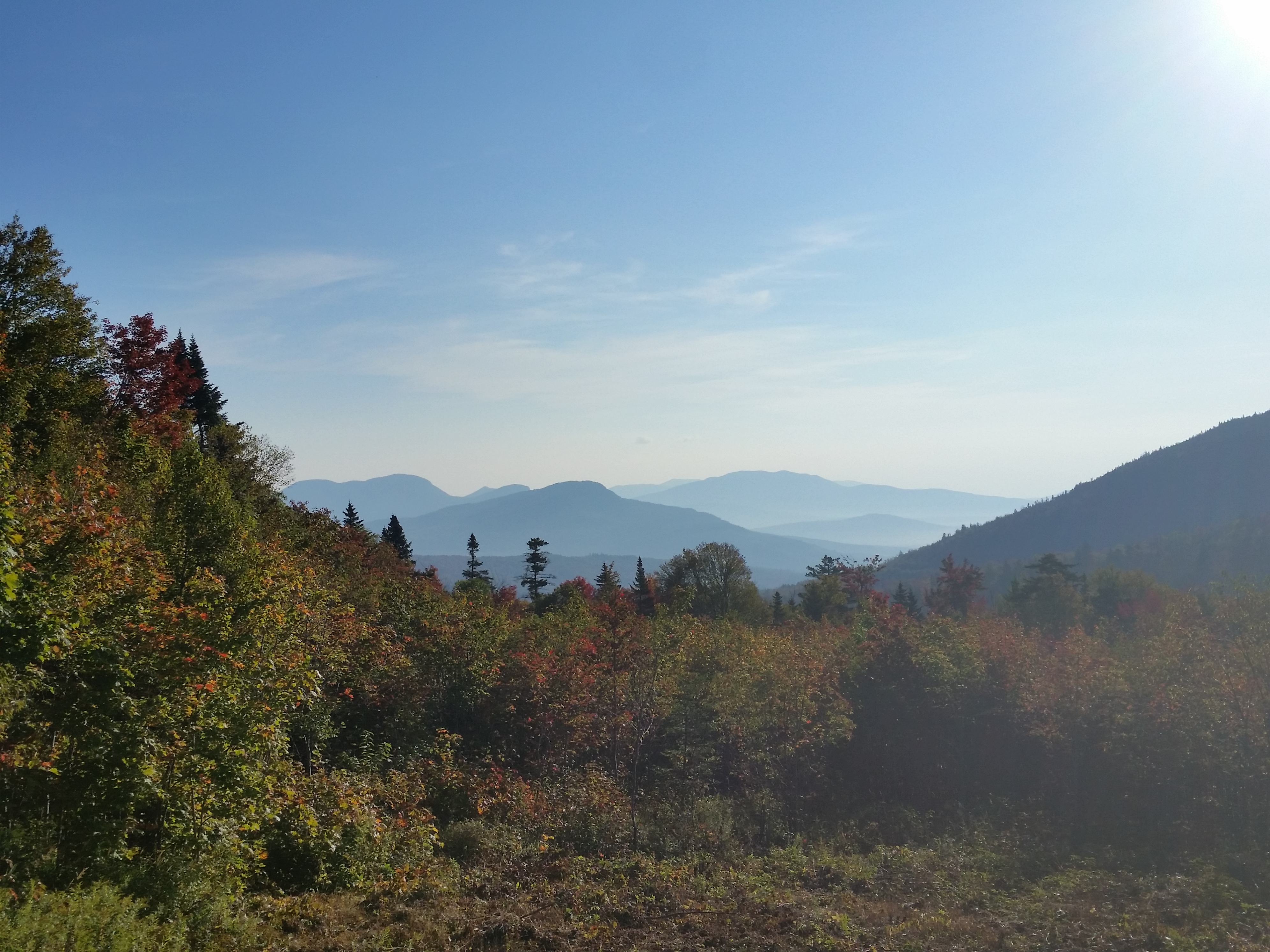 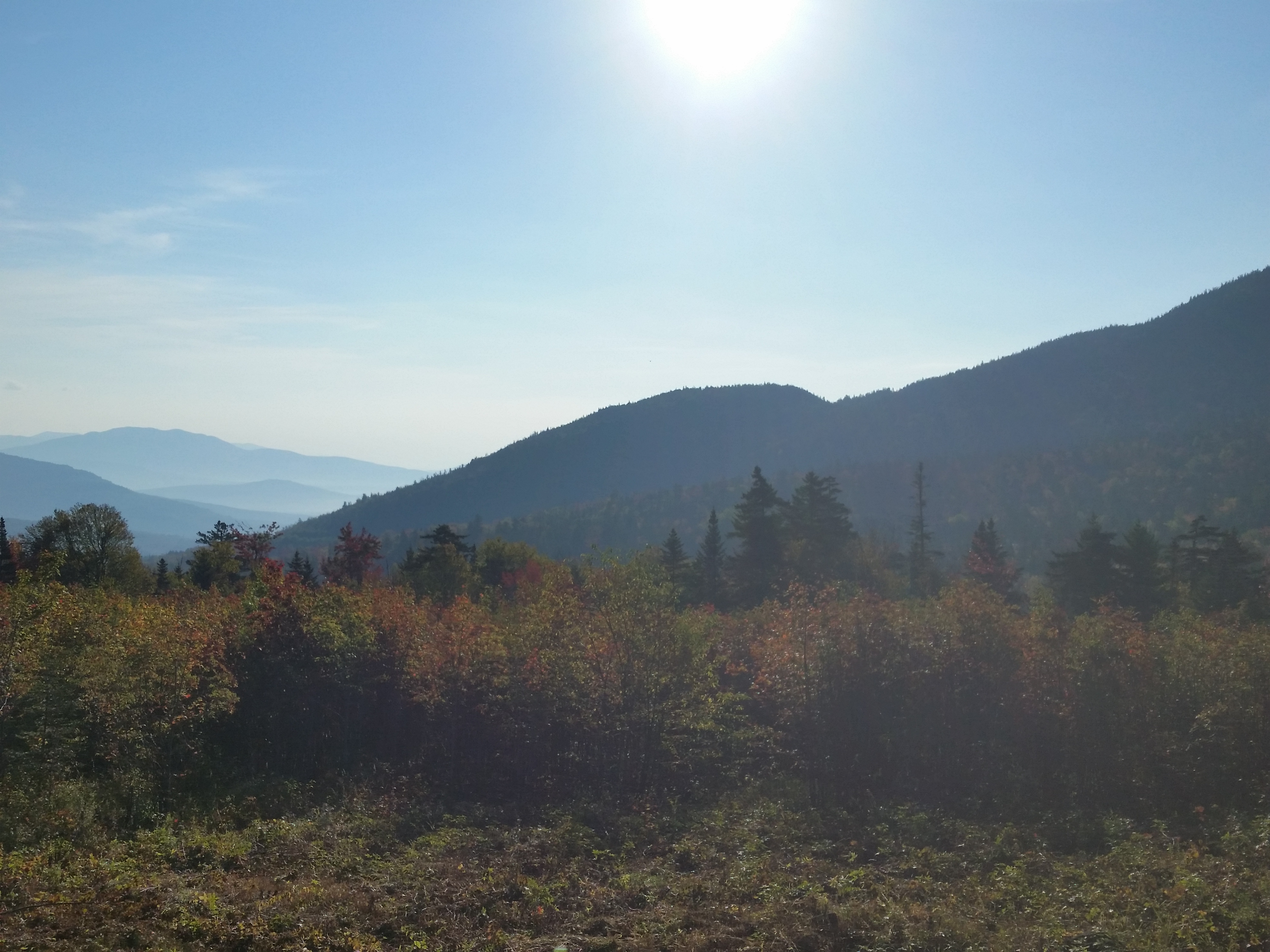 I enjoyed the Kankamagus, but I would not say it is a great motorcycle road. Not enough twists and turns (I’m such a spoiled brat now, I know). But for a car or RV, I can’t imagine many better drives. The surface was pristine and the road is not at all intimidating.

Soon I was in Vermont. This state is home to the best license place in the country. 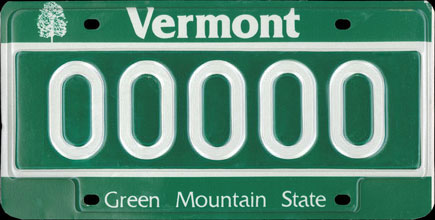 Simple, clean, effective. I will accept and subsequently refute any arguments on this topic.

Next stop was the Montpelier public library. It is housed in a neat old building and the staff were really friendly. The only downside was parking meters surrounding it, so I had a bit of a hike from a free parking spot.

It was nearly 3 by the time I finished this post and Champlain, NY (home of my tire) was about 2 hours away. I hurriedly began to pack up my belongings then…

Wait, why am I hurrying? The tire will still be there tomorrow, right? Why don’t I just find a campsite along the way?

This may seem like a trivial thought to include in this blog, but I think it was an important moment. I chose the option that was easier on myself rather than the one that was more efficient. I need to make more decisions like this. I still have a long way to go and my lull in mentality over this period was sort of a wakeup call.

I found a nice wooded campsite, which I totally forgot to take a picture of. I did photograph this interesting stream by my site though: 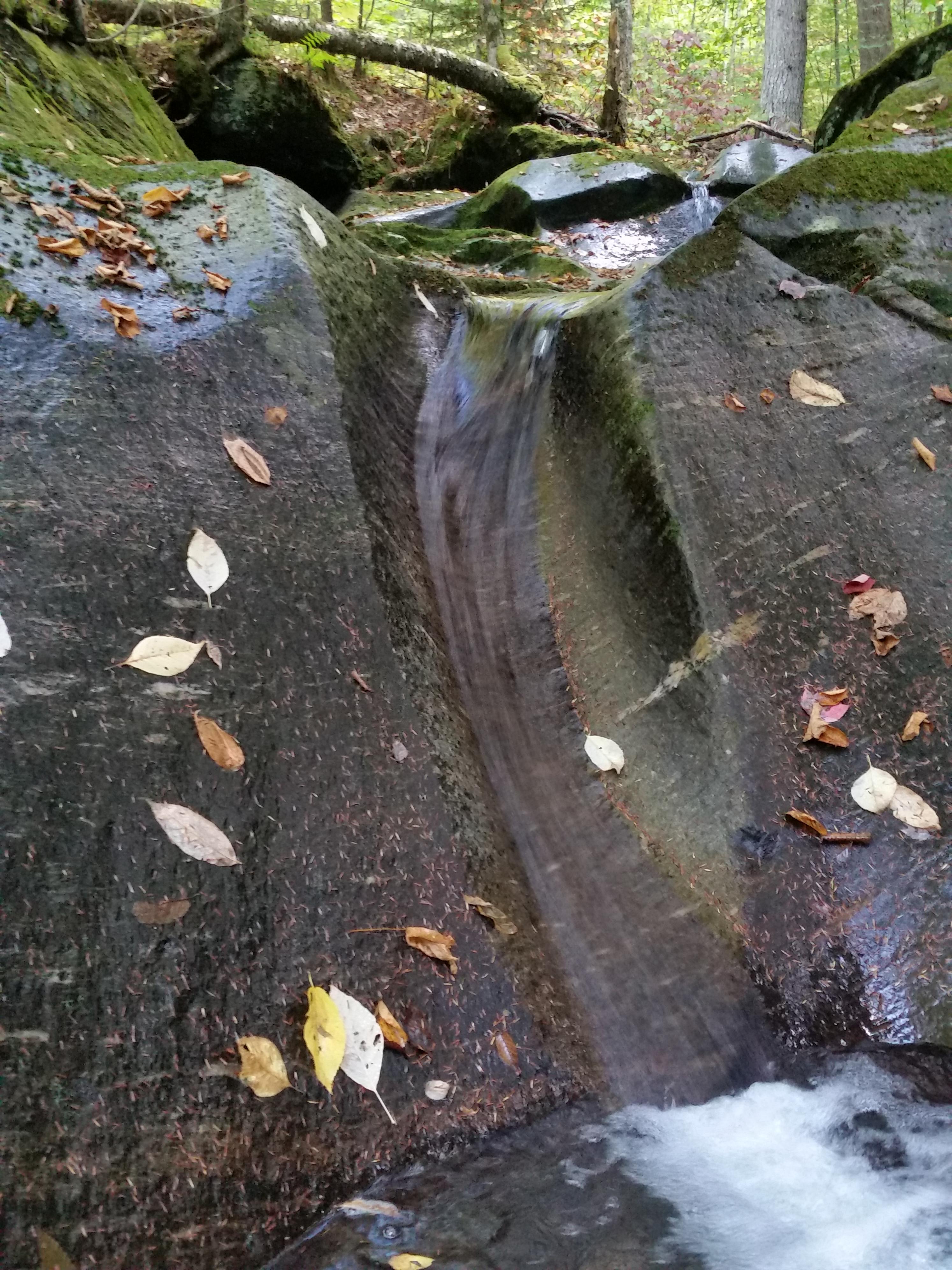 A great spot for dishes!

I was relieved to be within a hundred miles of my new tire. It appeared that I would not be paying the price for my procrastination. I saddled up and rode through the Lake Champlain area.

This is an area of the country I had never been before. It was scenic and charming.

Just before crossing the border from Vermont into New York, I decided to fill up on gas. I though it might be more expensive once I crossed (yep). When I exited the station to return to Annie, a gentleman on a Honda ST1300 was waiting for me. That is how I met François. My new friend from Quebec.

We began to talk about my trip and I learned that he lives just across the border. He was on a morning ride around the lakes, but decided to change his plans and accompany me on my quest. He knew the area well, so he could help find a place to change the tire.

What a fortunate place I had chosen to gas up.

He is a police officer and knows the province of Quebec very well too. When I told him about Schefferville, he knew the location exactly, even naming the adjoining town of Kawawachikamach. (sorry a squirrel just ran across my keyboard…oh, that’s actually how it’s spelled).

We got to the shipping center and in 5 minutes, for $5, I had a new tire in my hands.

It's the circle of liiiiiiiiiiiiiiiiiiife! #lionking Nothing better than a new shoe for my lioness. #annieisfierce #everywhereman

I stuffed it into my rear case (actually didn’t get a good picture) and threw a strap over the top. François said that there would be some options for tire changes in Plattsburg, so we headed that way. He followed me to make sure that nothing flew out of my trunk.

He had to get home in time for lunch, so we said our goodbyes and exchanged information. How nice of him to help me! It was great to meet him. 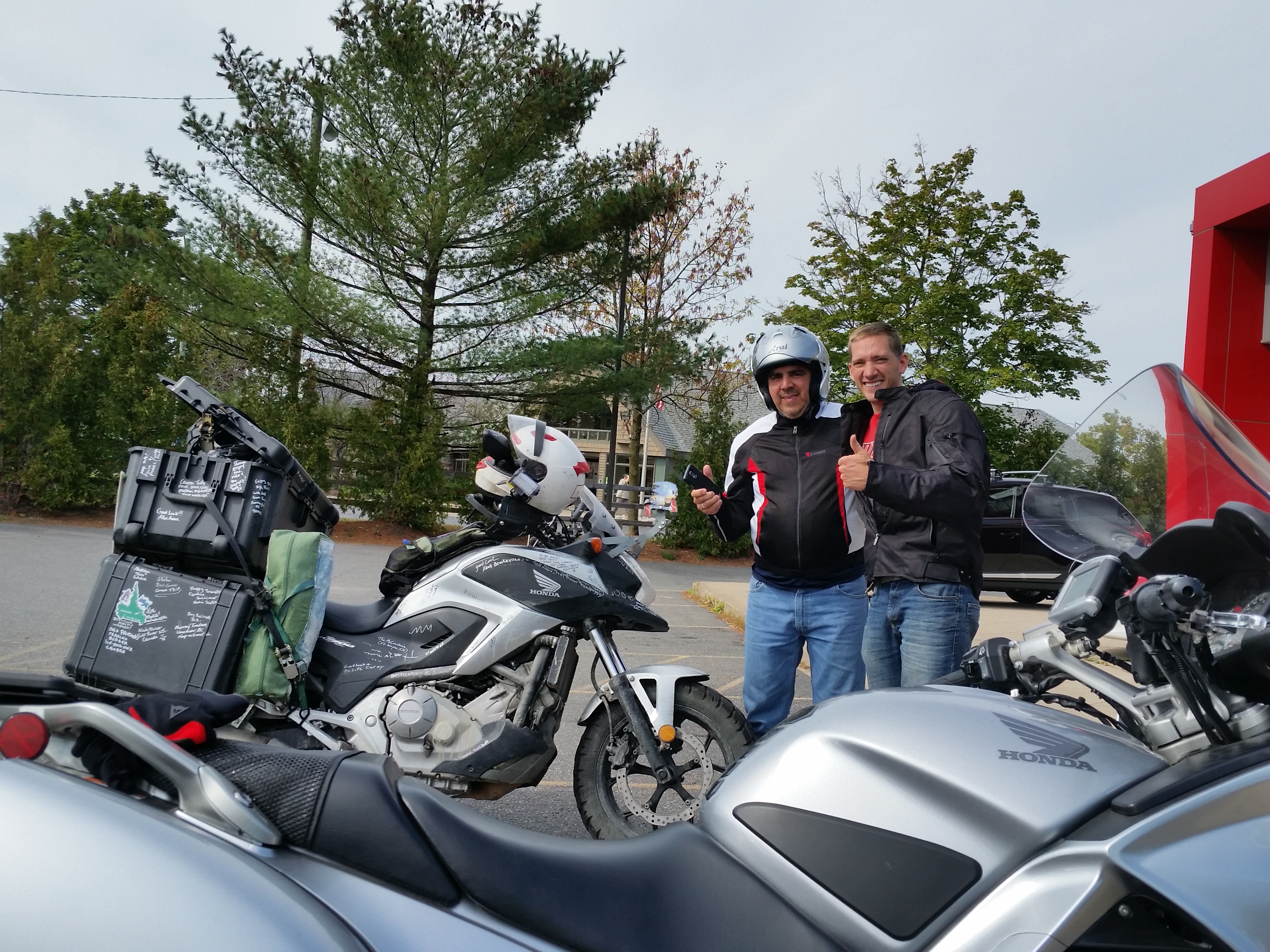 A little phone research sent me heading to North End Harley Davidson to get my tire put on. Bringing in the wheel off of the bike would only cost me $32, including balancing. Sign me up! 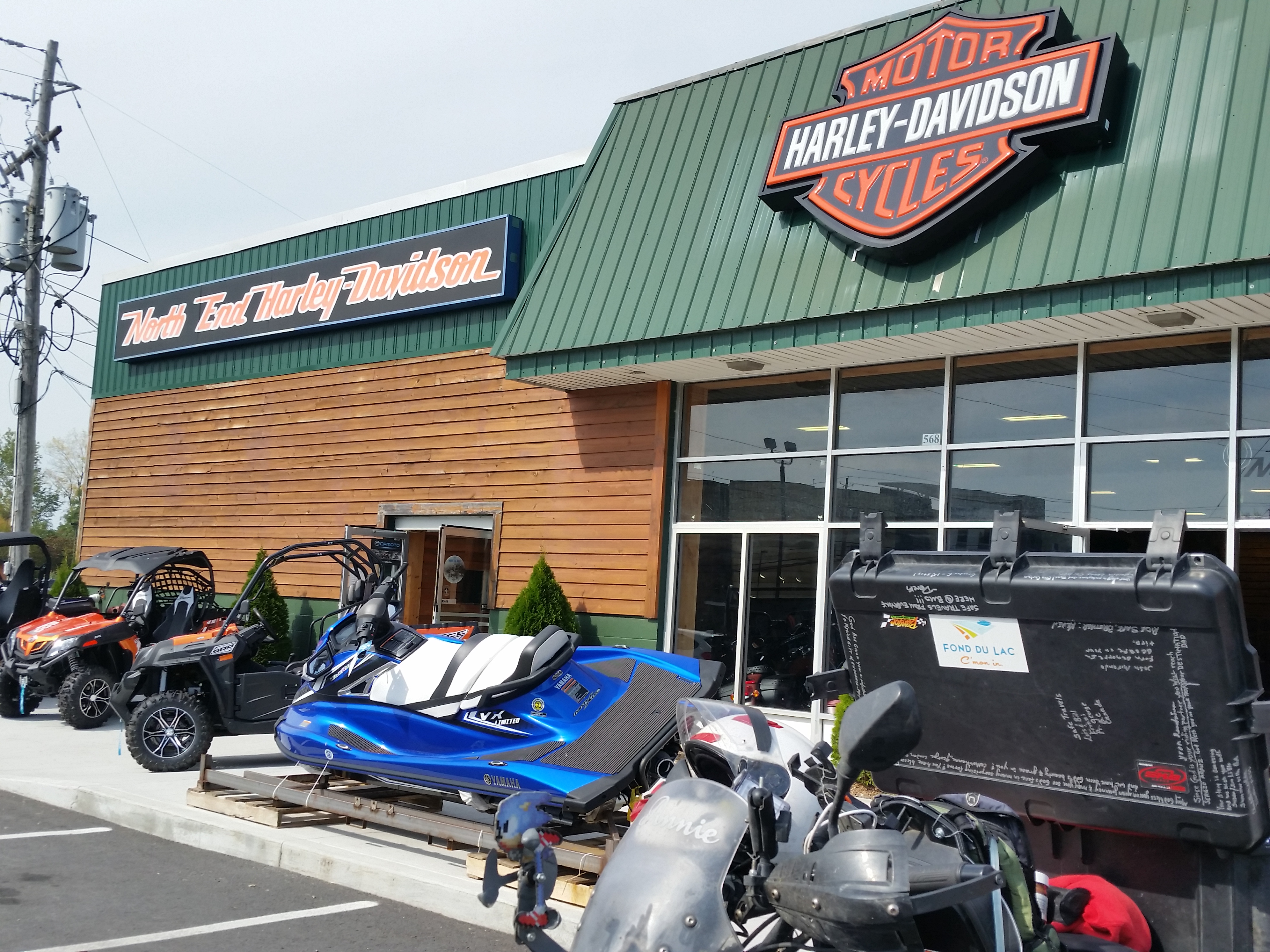 Some tire pics for posterity. This is lowest I’ve ever taken a tire: 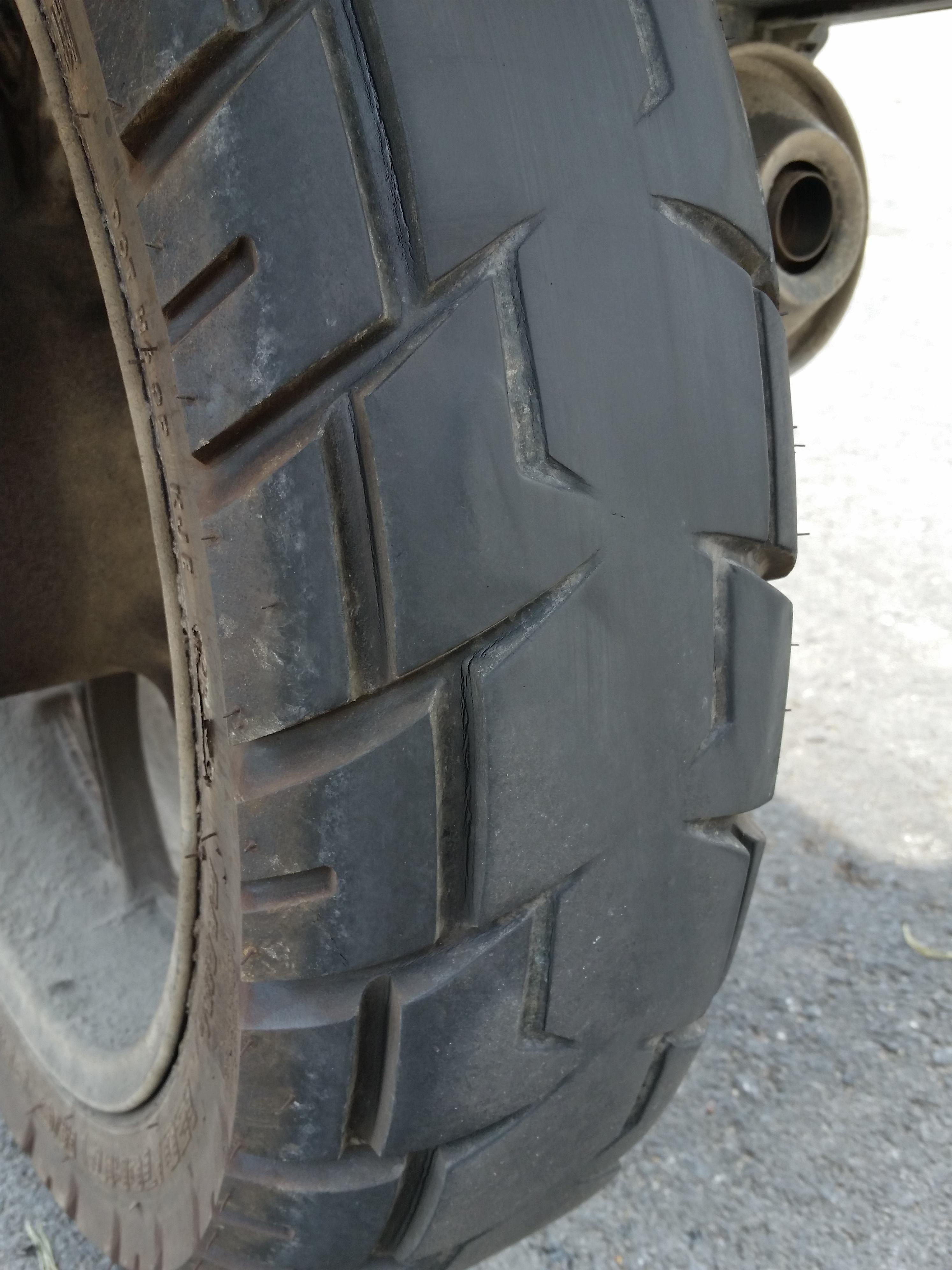 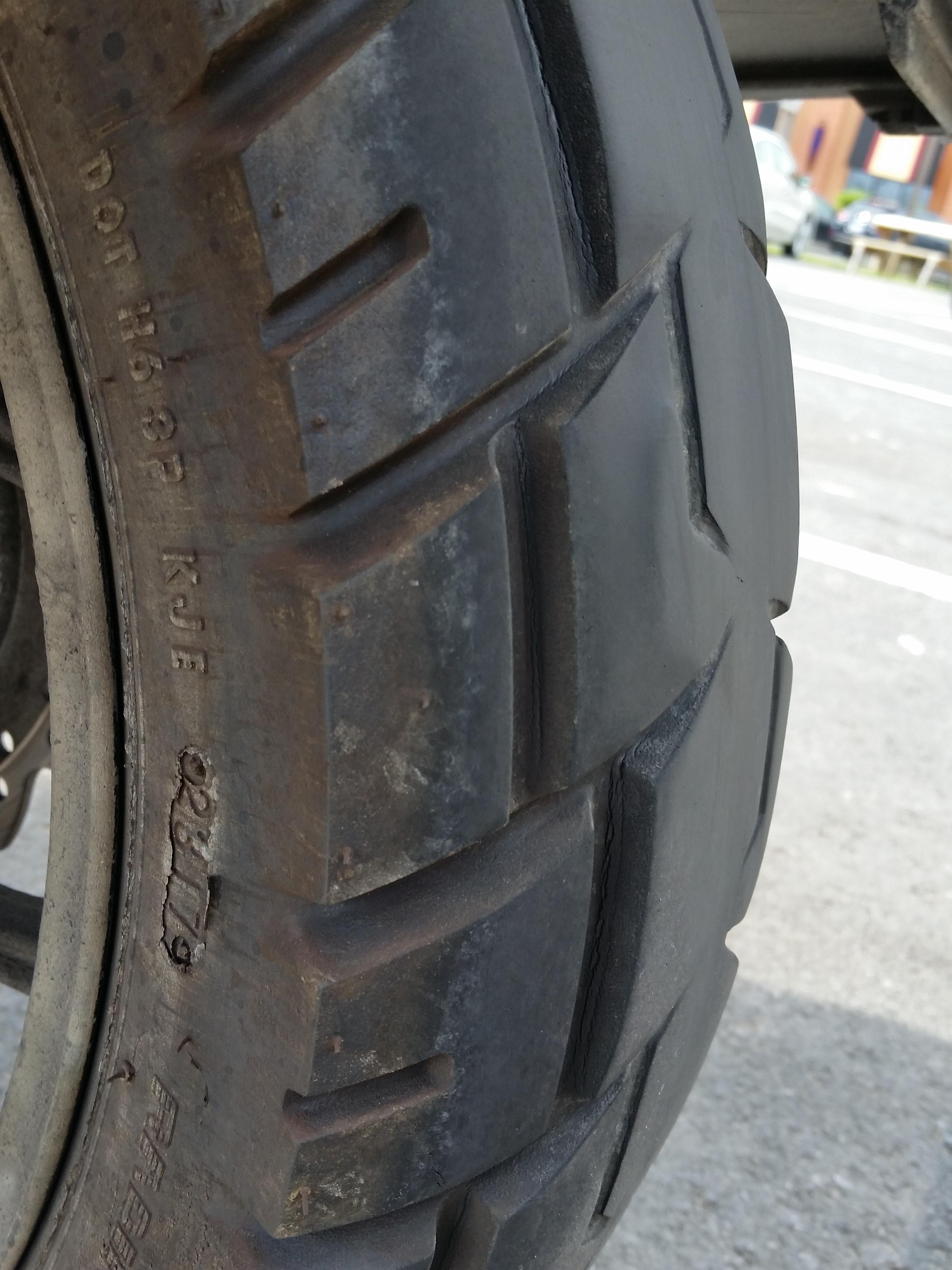 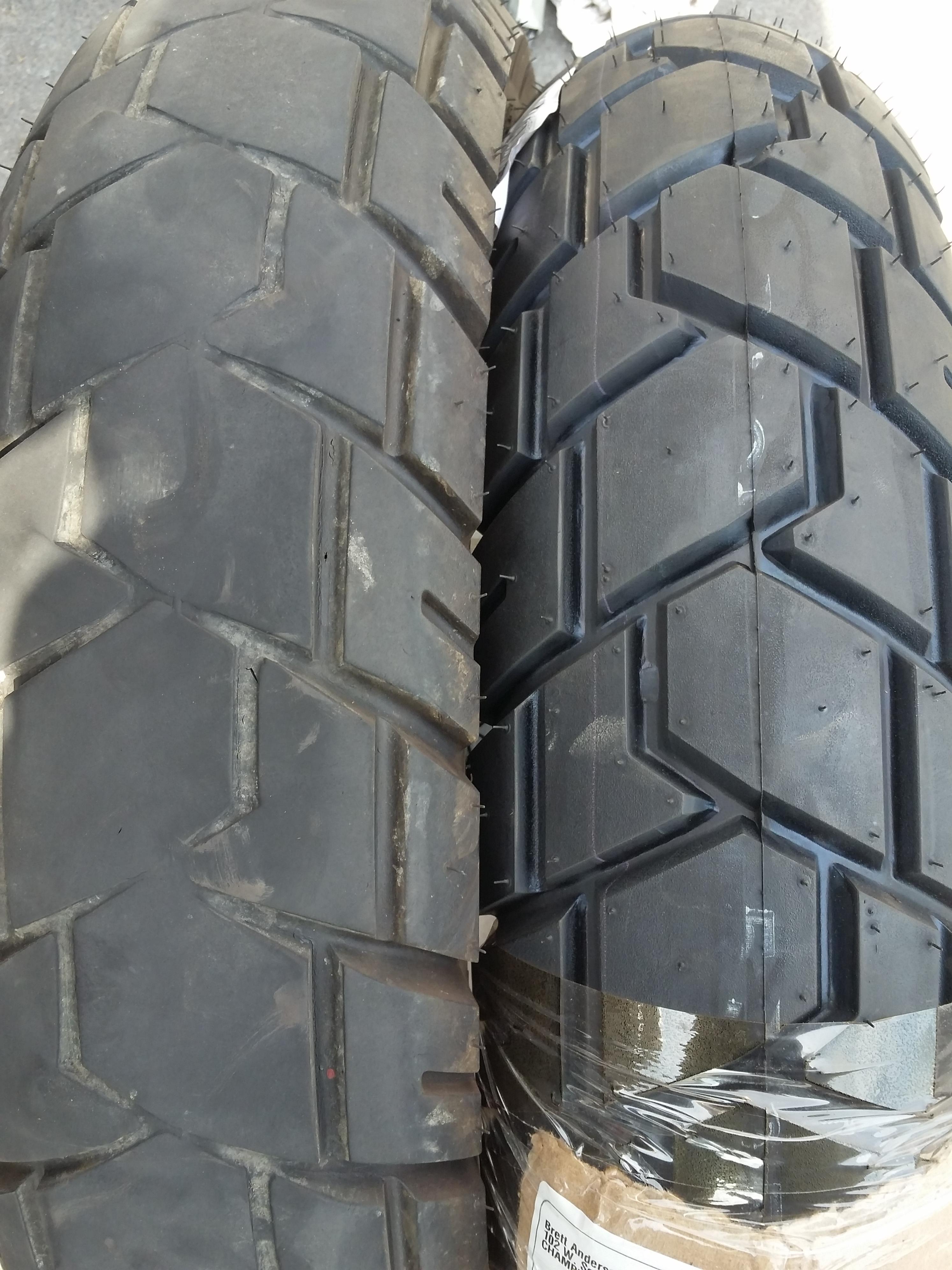 This tire lived a good long life, over 12k miles (that’s really good for a rear). It was mounted in Trout Lake, WA, has seen both coasts, survived the Ombabika log roads and took me to the doorstep of Schefferville. Well done, good and faithful servant!

I took my time mounting it and greasing what needs to be greased. I also spent some time in the parking lot practicing braking and turning. A new tire changes handling a surprising amount.

With all of the days commotion, I realized that I had not eaten yet. It was already after 2pm. I made a McDonald’s wifi stop to fill up.

Let’s leave it there for now. Tune in next time to see if I can maintain my giant lumberjack sobriety.

Realtime update: I’m still in the Brockport/Holley, NY area. I’ve gotten so caught up over the last couple of days. This has been such a welcoming and pleasant place. Nights are getting colder though (mid 40s), so I need to get rolling. I want to be at Niagara Falls at sunrise tomorrow and hopefully get Buffalo on Monday. Then it will be back across the Empire State to Massachusetts.