Alright, time to talk about what comes next. I’ve made some fairly big decisions over the last week or so.

(The picture is from our family’s Europe trip in 2011. It kind of reminds me of a Renaissance painting. Everyone’s finger is pointed in a different direction. Great shot, Sis) 🙂

This won’t be a full state of the trip address, as I did not pack my suit. However some of these recent decisions bear telling, if only for posterity’s sake.

Let’s take a peek at the SE: 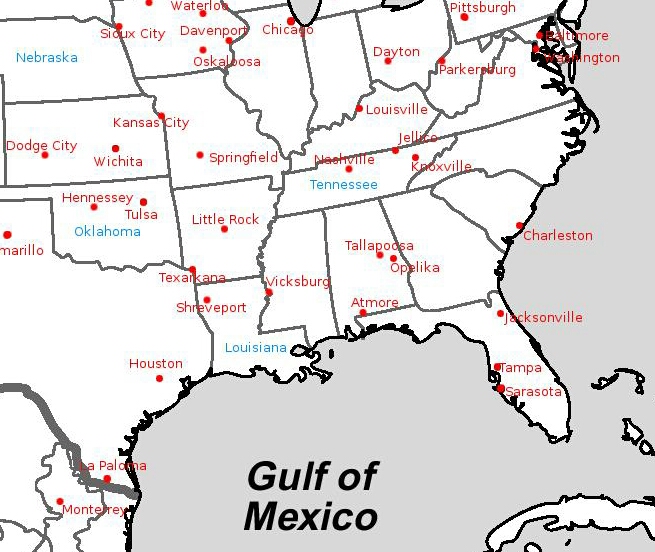 I currently sit in Louisville, KY. When this loop began, I was planning to head back west at this time, take care of the three remaining Iowa stops, then spend some time back in Nebraska before beginning the SE loop.

I’ve decided to jump right into it, however. I’ve got good tires, a good attitude and feel ready for another month or so on the road. After I finish up Louisville (most likely tomorrow…I’m kind of rained in right now), I will head south for the four Tennessee stops, east to Charleston, SC, down to Florida, then began working my way back. I’m not sure how many places in the Mississippi/Louisiana/Arkansas/Missouri area I will visit on this path. Time will tell.

My goal is to be home for Thanksgiving, which would mean a lot to me and presumably the rest of my family.

I plan to spend a few weeks in Nebraska making preparations, then it is time for the adventure to really begin: The BIG south loop, all the way down to Argentina.

I was initially planning to do this after all of North America was completed, but that does not seem to make sense now. I’m not really behind schedule-wise, I’ve just been reconsidering. If I wait on the BIG south loop until North America is completed, I may need to rush it. I want to feel free to take my time while I am in unfamiliar territory.

This means that the remainder of the western US will be the final loop of the trip, taking place sometime in 2018.

That’s what I’m thinking now. There will probably still be a dozen or so revisions to this plan to come.

One question I receive fairly regularly while on the road is, “Are you doing them all in song order?” My normal response is, “No, that would take a lifetime.”

Well, I got curious, as is my wont. I decided to actually run the calculation to see how many miles it would take to do them in song order.

So the total number of miles?

Honestly, not as high as I thought it would be. It is less than four times as much as the actual miles I will cover on this trip (50k-ish). Maybe that means I am really bad at planning a route. 🙂

The longest distance between places is Baltimore, Maryland to Salvador, Brazil, 9,442 miles. The shortest is between Buffalo and Toronto. Funny enough, I did not visit those two places consecutively.

So visiting them consecutively would be possible. It would probably take 4-5 years, I would imagine.