Our adventure continues with places 37 and 38: Pittsburgh, PA and Parkersburg, WV. I succeed in finding some good riding. I fail in paying for anything.

I think he may actually be saying “burg.”

I had perhaps my most significant oversleep of the trip, dozing until 8:20am! I like to get into cities early, so this was less than ideal. At least I had slept long enough to avoid the morning rush hour.

My first target was Point State Park, at the convergence of some rivers.

I use the ambiguous term, “some,” intentionally. There is Three Rivers Stadium and Three Rivers Park, but I still only see two Rivers which change names when they meet. I guess it is a matter of semantics. 🙂 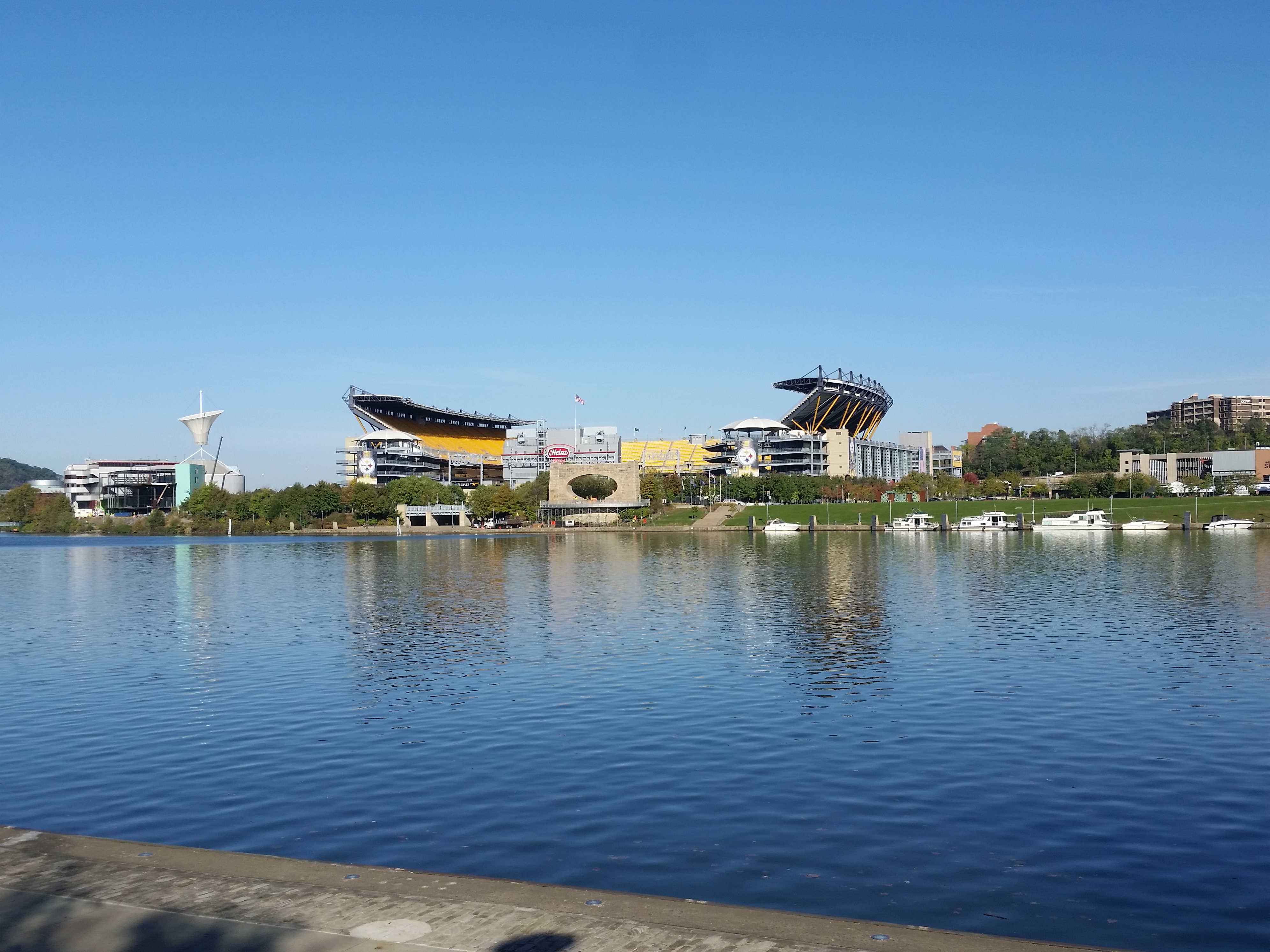 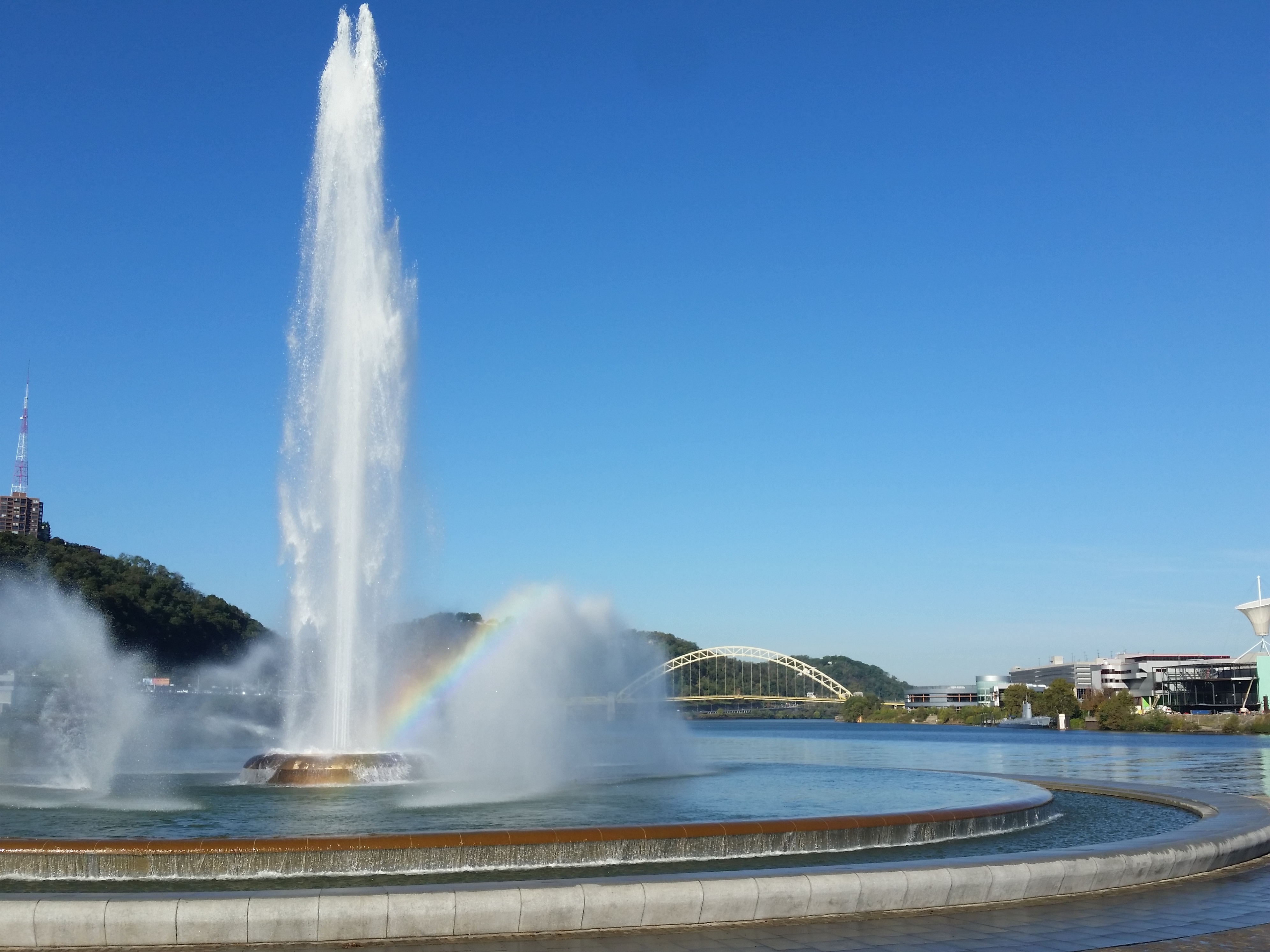 Sure is pretty though!

Before I had even dropped my kickstand for the first time in The Steel City, a resident had reached out to me. They had seen my sign on the way into town and asked if I needed anything. This would kind of be a theme on the day. 🙂

I was really surprised by the geography of this city. It is surrounded by steep hills and forests. The roads and real estate are mostly carved into the hill sides. It makes for some interesting driving.

One of the hills is called Mt. Washington. From it, a really scenic view of the city can be obtained. As I rode up, a gentleman named Scotty was behind me. He thought that I might be stopping for some pictures, so he followed me and helped me out. 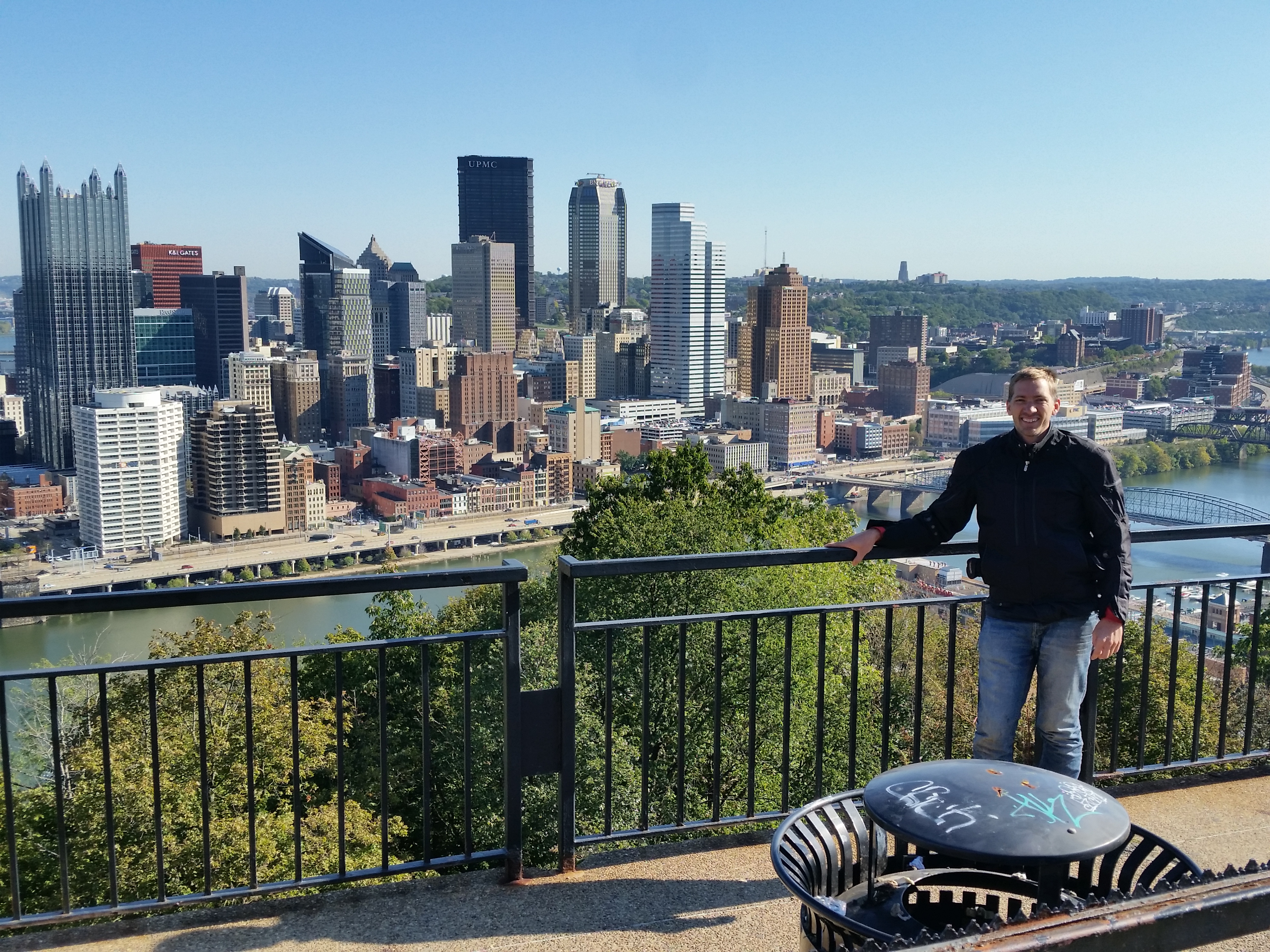 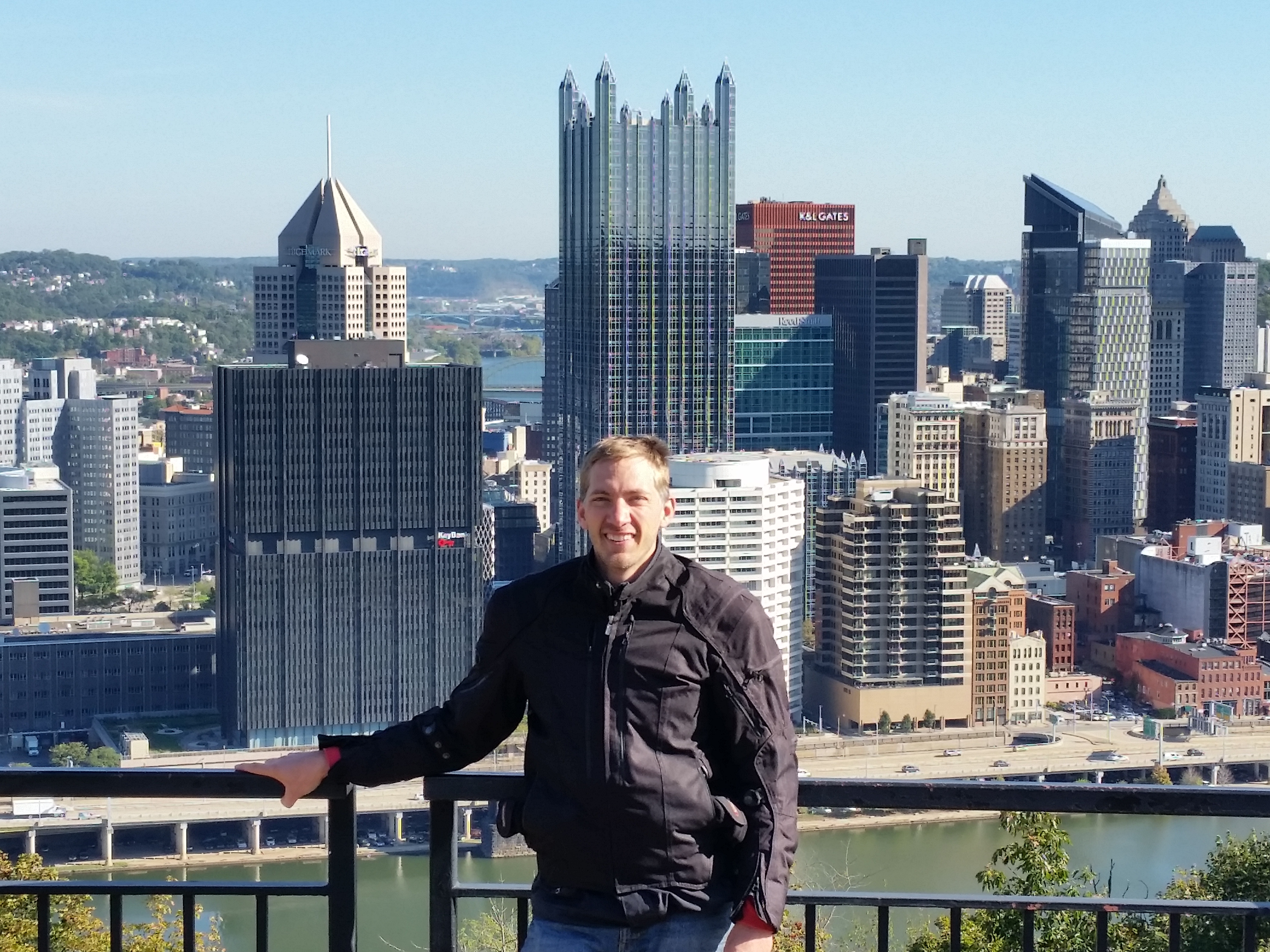 What a nice guy! He’s a rider too, so we had plenty to talk about. Before heading back down, I saw one more perfect angle and rolled Annie onto the sidewalk. 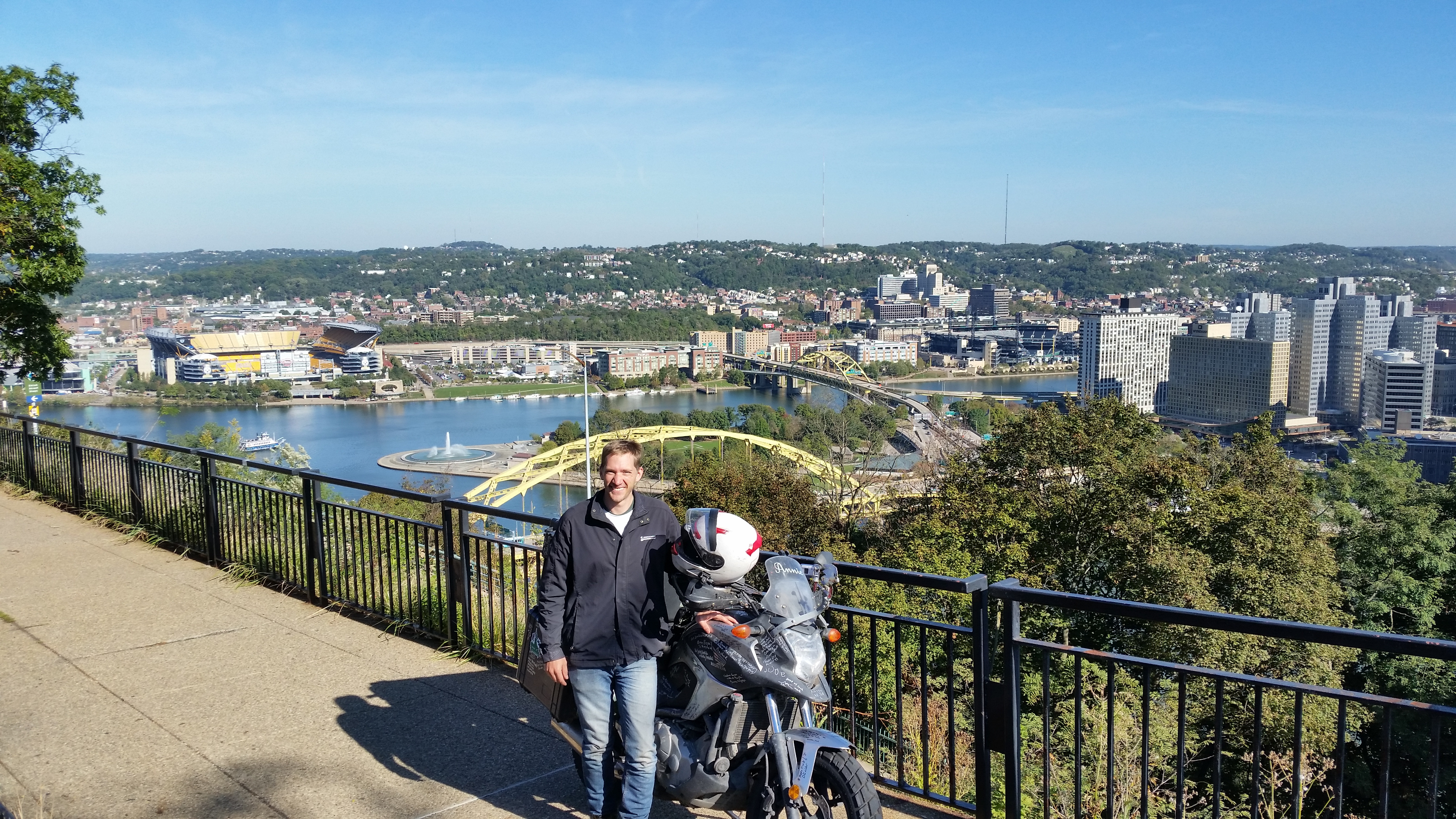 I also received a business card from a gentleman in Sarasota, FL, a future song stop, while I was up here.

I did have a contact in the city, an old friend named Bryon. We worked together for a few months at People’s City Mission, the homeless shelter in Lincoln. He came into town at a time that we were really short staffed and helped us out through the difficult winter months. We hadn’t spoken in a couple of years, but he treated me to lunch at a place called Fathead’s. 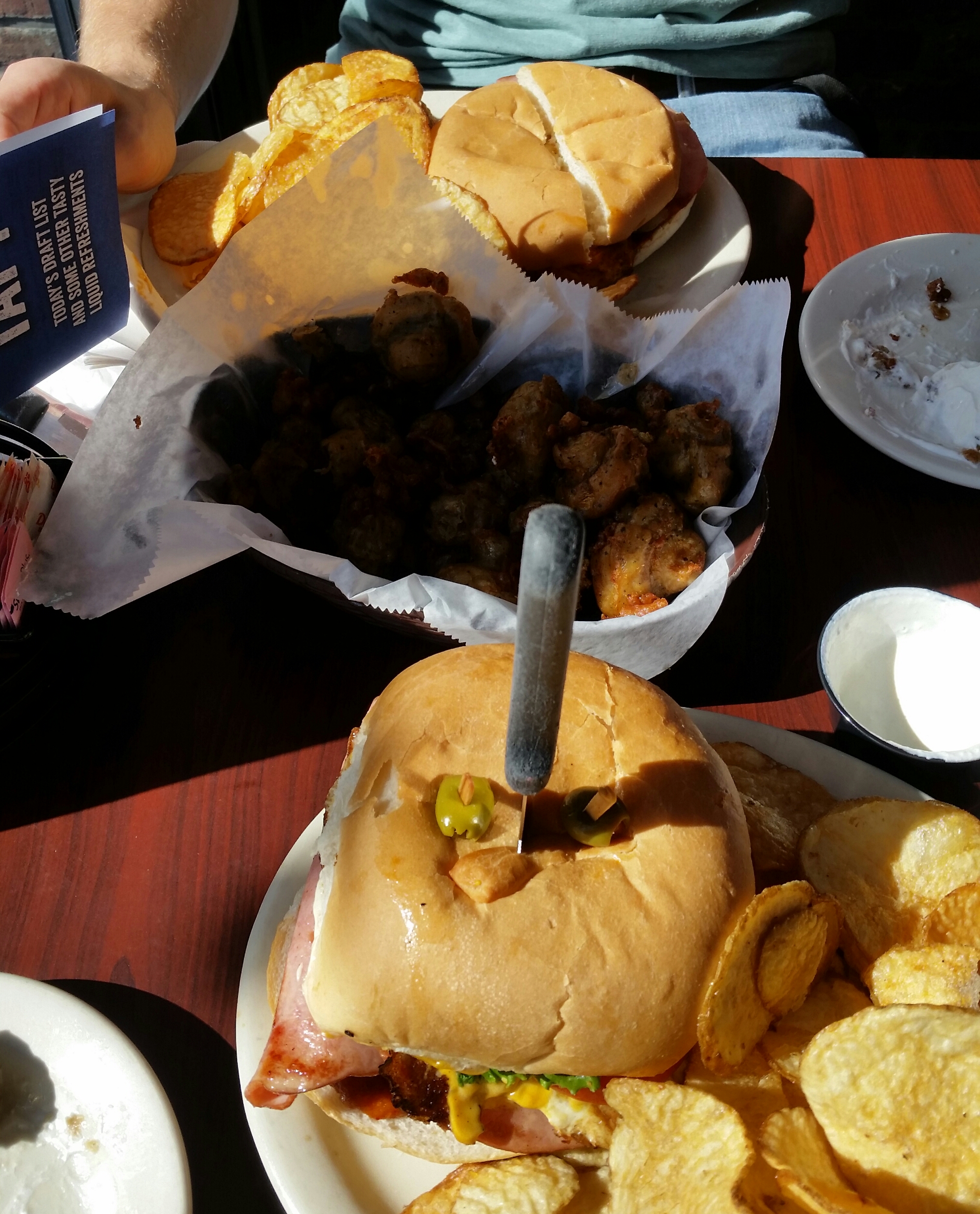 It was great to catch up with. We picked up basically right where we left off. He wouldn’t let me pay for my meal, which seemed like a very Pittsburgh thing to do. He agreed to accept the honor of crossing off his city from my sign: 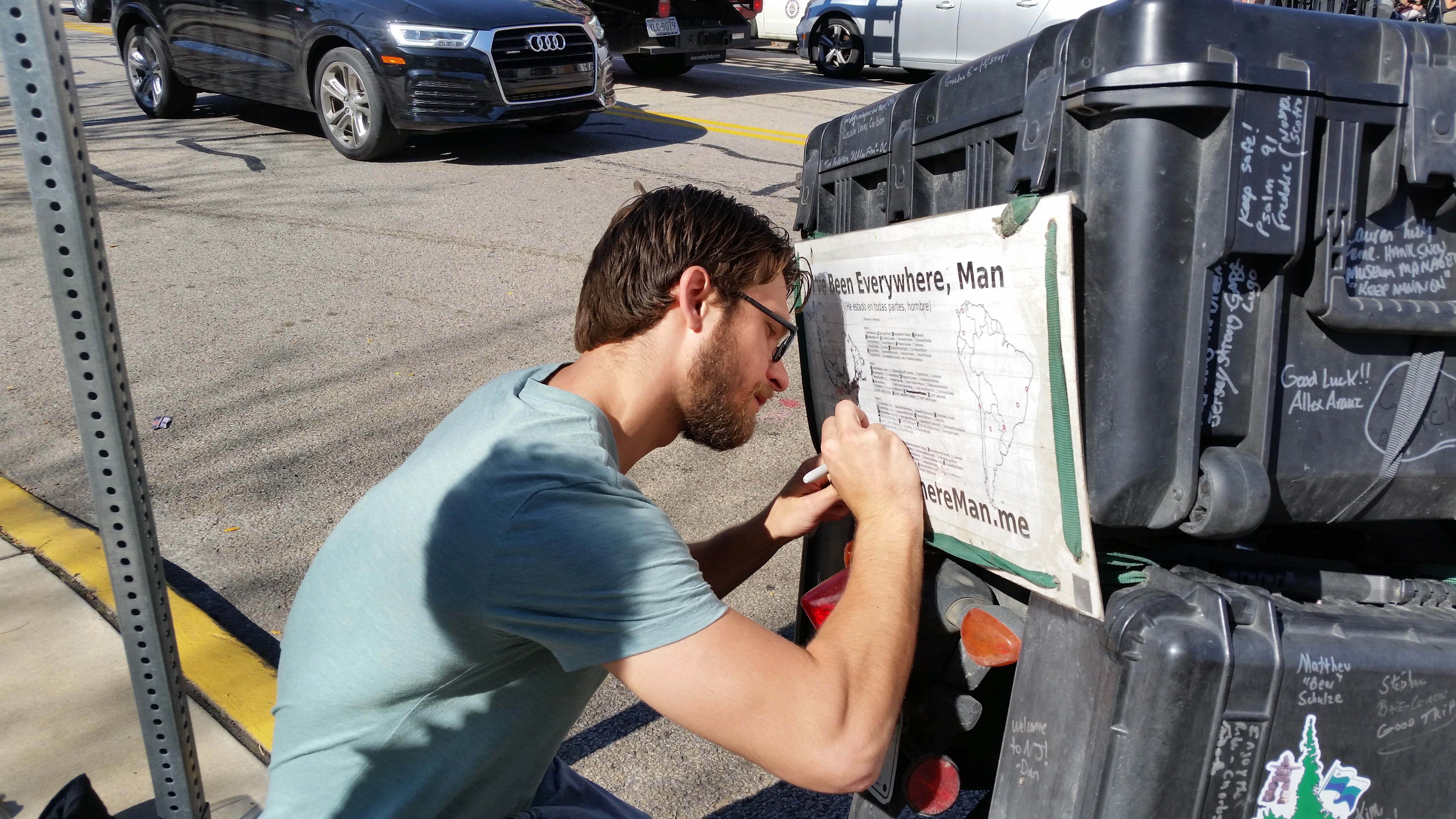 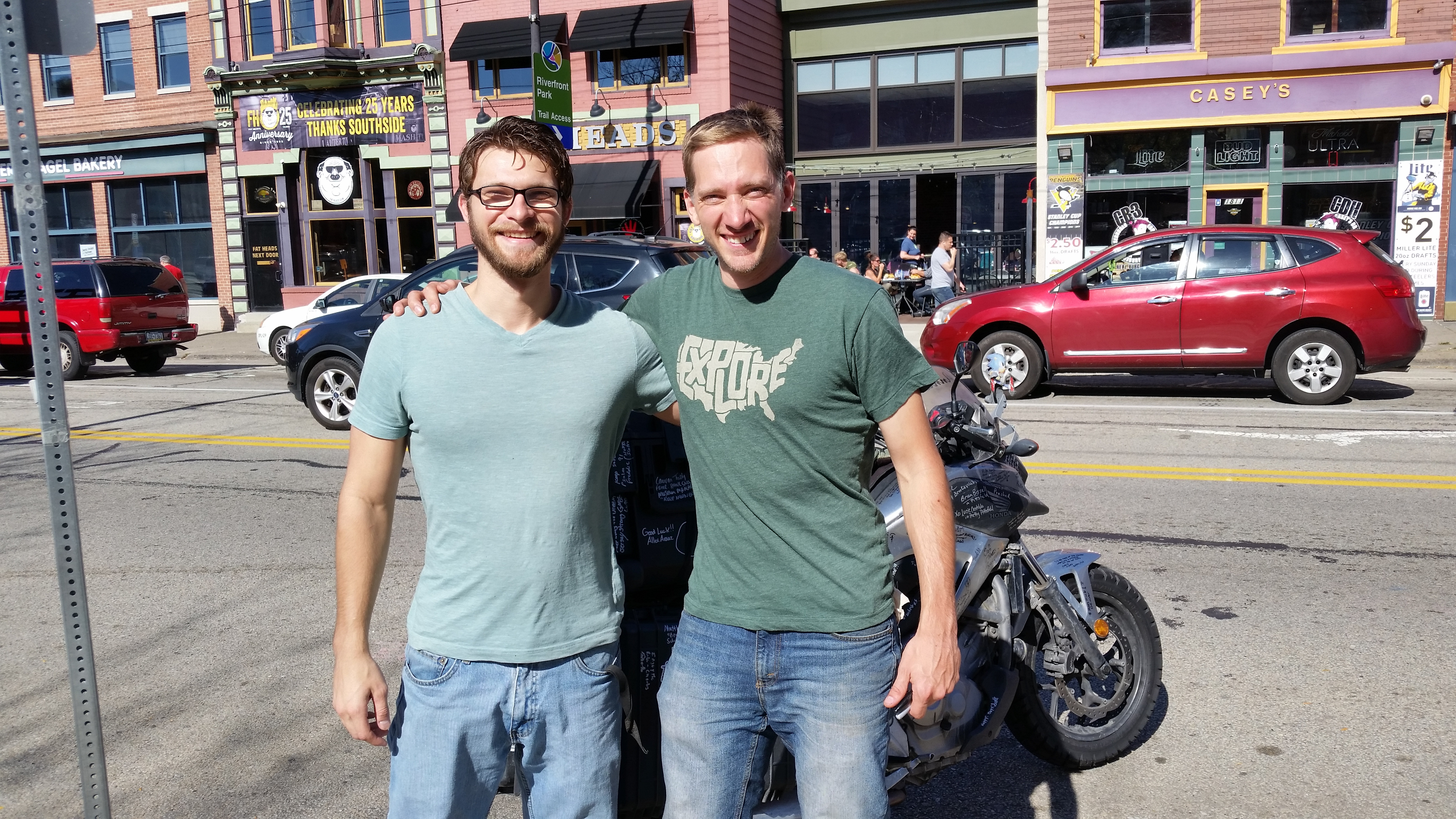 He asked where I was staying for the night and I gave my normal noncommittal answer. I usually don’t know until I see it. He invited me out to his family’s place which is outside of Pittsburgh, in the direction of my next stop. I could not pass that up!

I still had a few stops to make. One of them was at the Heinz Chapel at the University of Pitt. It was amazing! 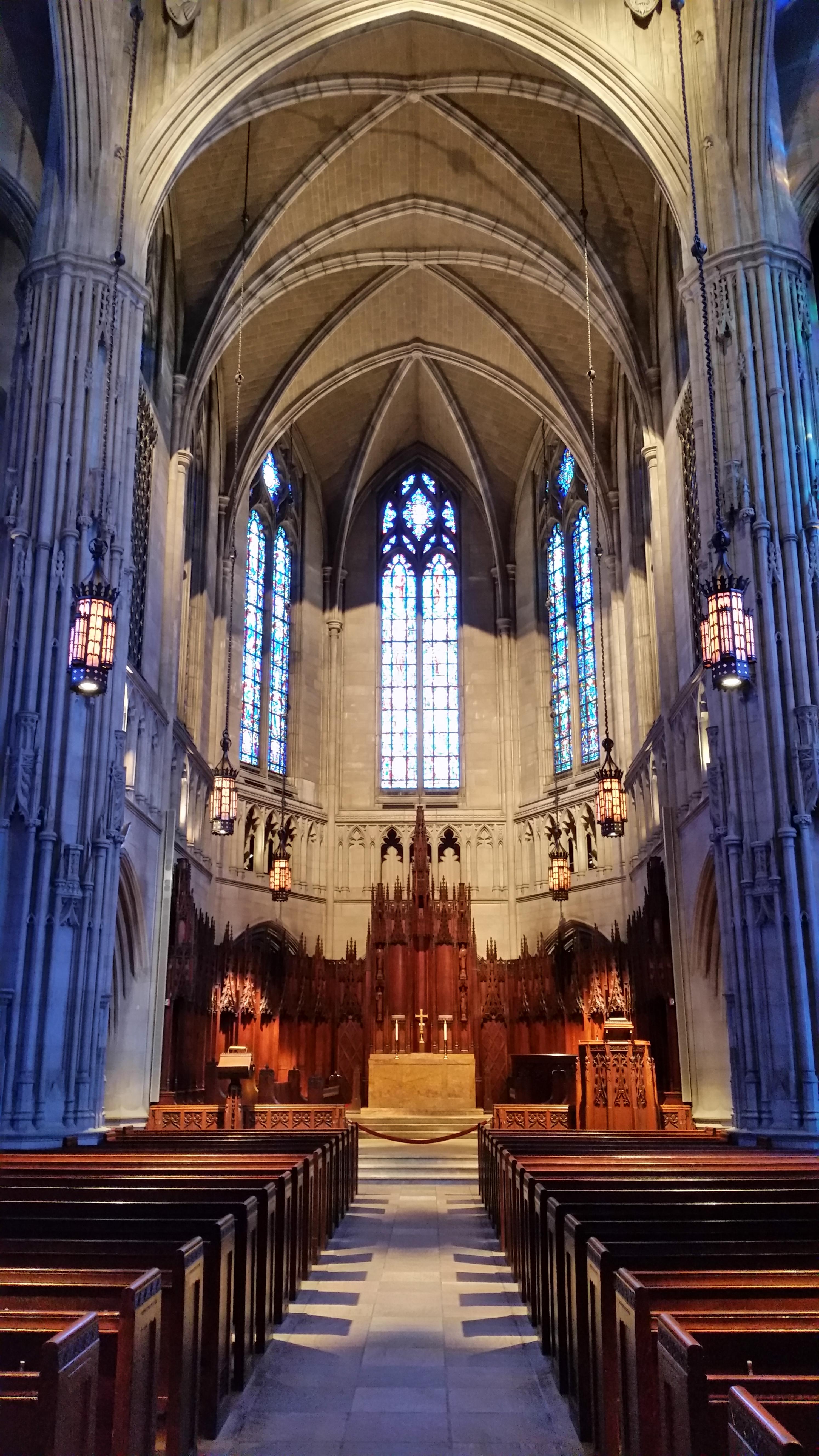 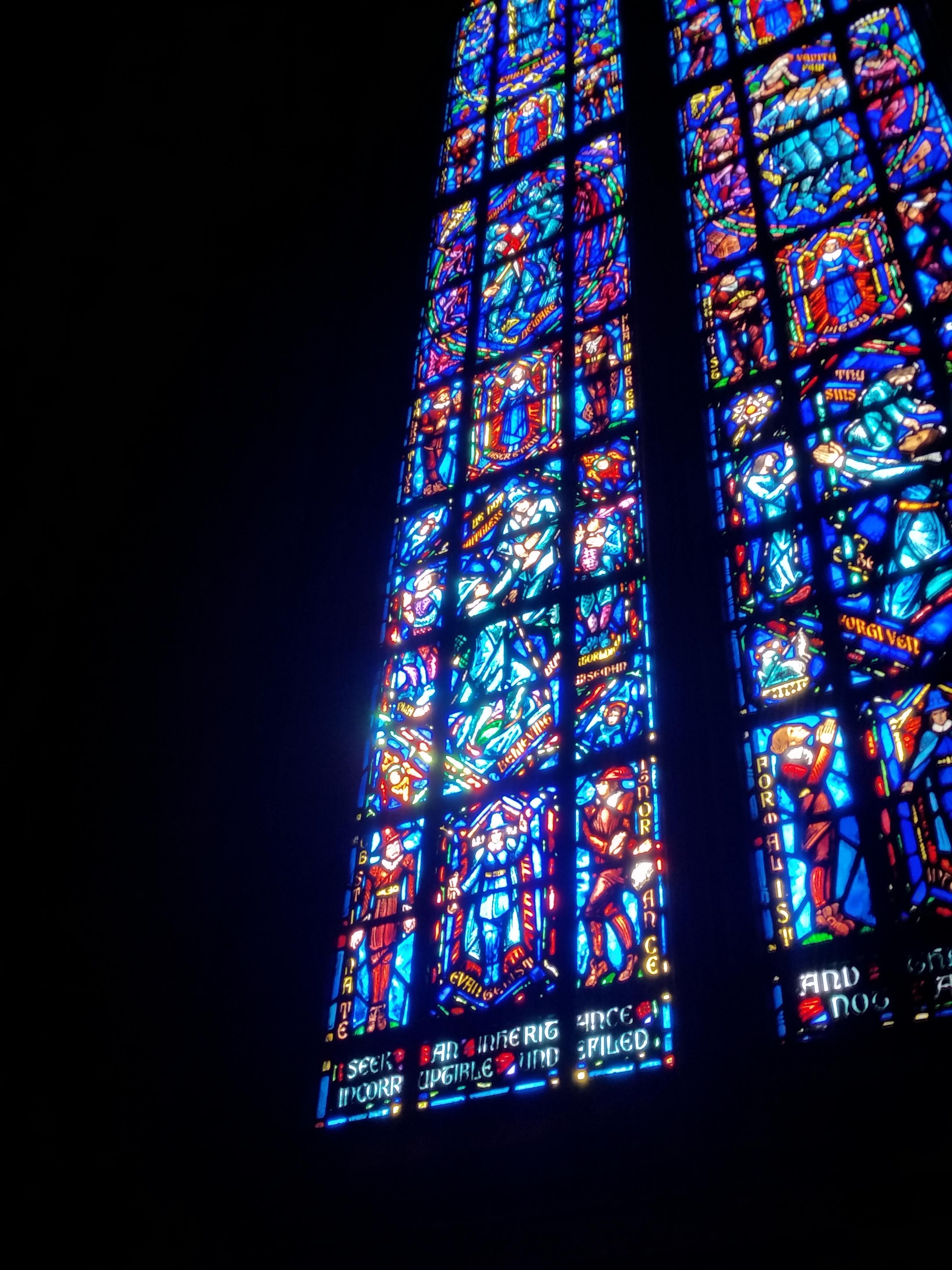 I was actually there while someone was practicing on the organ. There are few things better in life than listening to a huge instrument in a huge building. The sound really washes over and surrounds you.

I spent some time at a library and did not head towards my evening hosts until around sunset. They live in a place called Burgettstown. In 1873, a regional ordinance required that all places in the area include “burg” in their names. The same ordinance also states that everything you read on the internet is true. 🙂

They were having a bonfire near a cabin that Bryon and his “Pap”(grandpa) had built. I got to meet his grandpa Chuck, his mom Teri and his step-dad Dave. We had some good beers and good conversation.

When I asked Teri about her occupation, she said she was a product manager for Shell Oil. She works mostly with the diesel oils. I told her that I always use Rotella T6, a full synthetic diesel oil, in Annie.

I should expect my sponsorship from Shell to begin at anytime. 🙂

Bryon and I decided to “camp out” in the cabin, though I have a hard time using the word “camp” for anything that has a roof. Once again, I was so well taken care of. 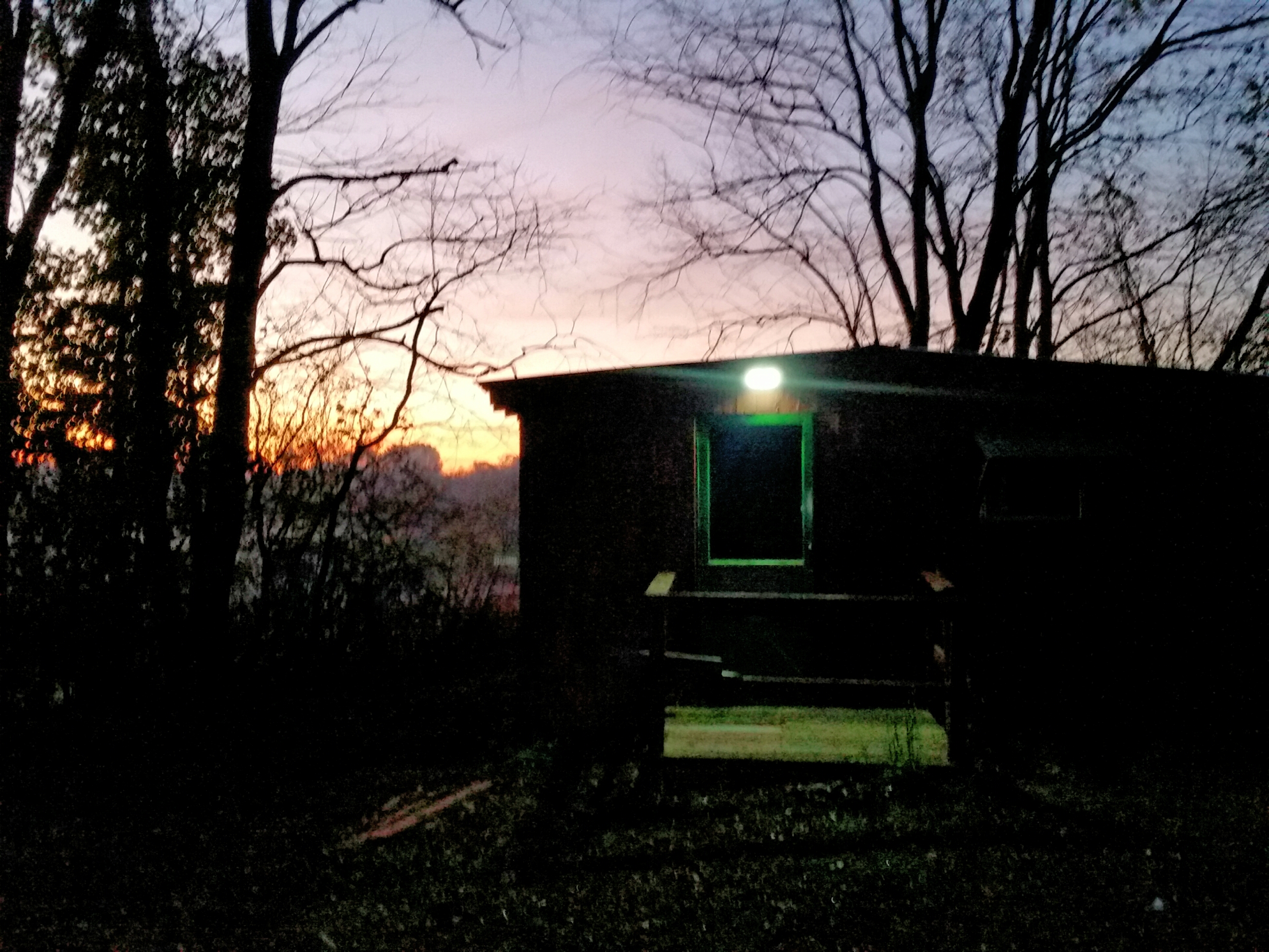 I got a shower, breakfast and a couple of spare tooth brushes in the morning. It was a great stop.

My destination for the day was place 38 of 92, Parkersburg, WV.

I’ve maybe mentioned that I sometimes will email ahead to places that I am going to visit, usually to a visitor center or chamber of commerce. I oftentimes do not hear back, though some places are very helpful. Parkersburg would fall firmly into the latter category.

I had been in touch with a gentleman named Mark, who is the President and CEO of the Greater Parkersburg Convention and Visitors Bureau. We had exchanged several emails and he seemed eager to show me around Parkersburg. To what extent I was not sure, but I am always glad for any assistance on my quest.

My wonderful Mother had suggested a scenic drive to get down to Parkersburg, taking Ohio Rt. 26. It was amazing! The scenery, the condition of the road, the curves the covered bridges…I could go on and on. 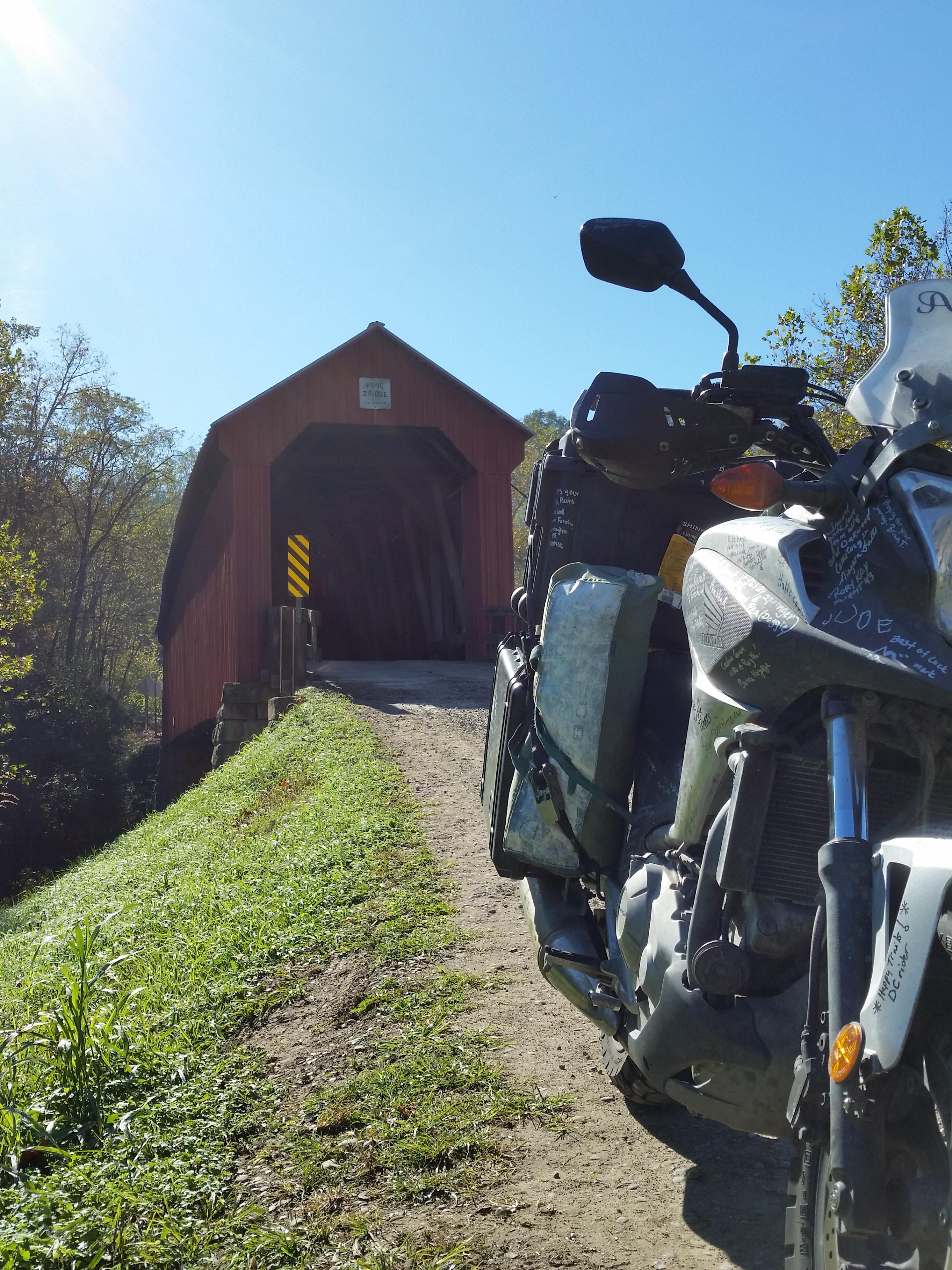 I actually scraped a peg on this curve. 🙂

I tried mounting my camera on a little stand affixed to my trunk to get a new angle. I’m calling it “the girlfriend view.”

I arrived in Parkersburg invigorated by the ride, meeting up with Mark at 12:30.

Mark is a fascinating guy. After getting a degree in Political Science, he spent about 30 years as a guide and manager for a white water rafting company in southern West Virginia. He moved back to his home town of Parkersburg to help take care of his mother and now applies his talents to the promotion of Parkersburg. 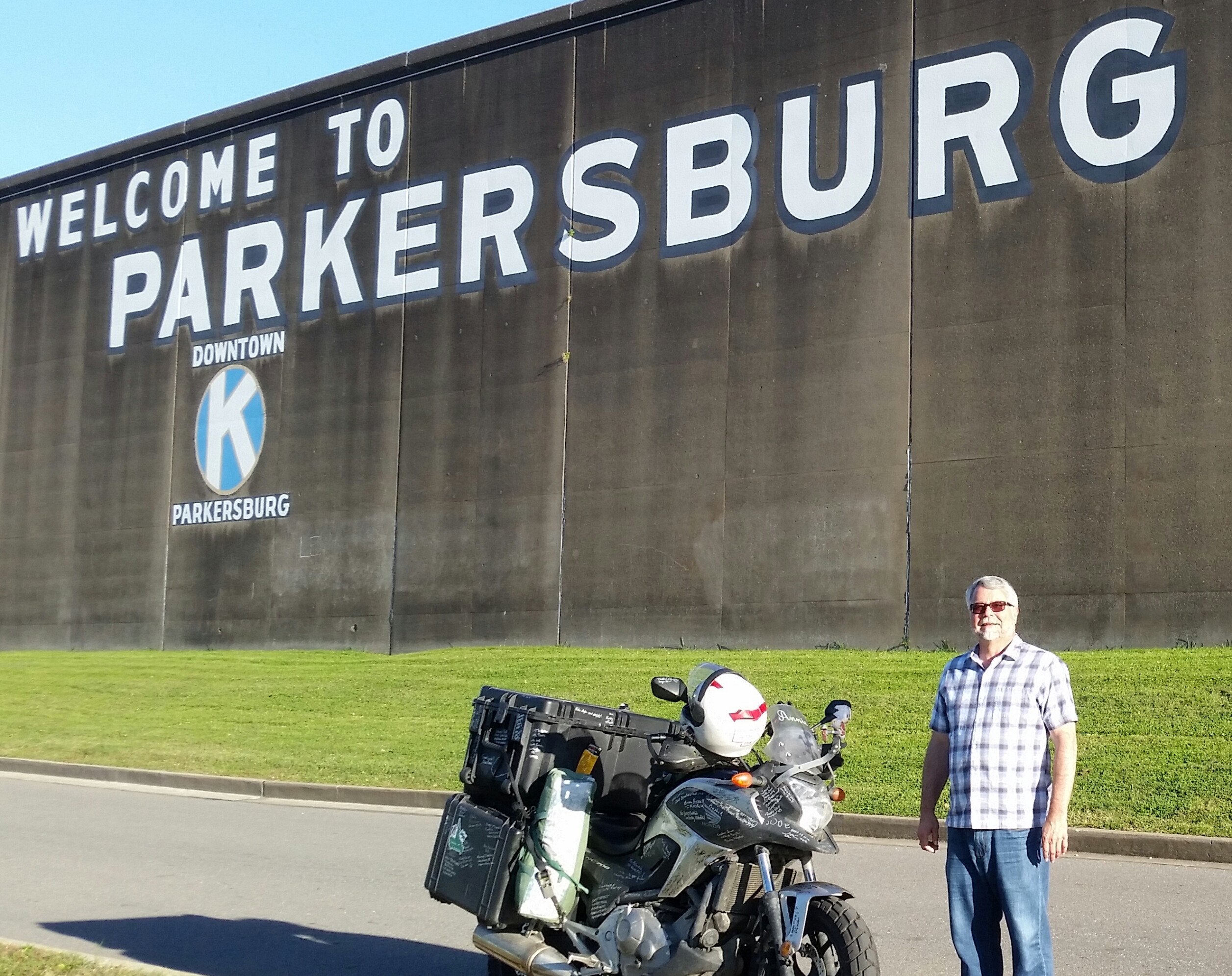 Despite all of his positive qualities, I must say that he is absolutely terrible at his job. One of his main tasks is to bring tourist revenue to Parkersburg and he did not let me pay for a single thing all day. I’m no expert, but aren’t you supposed to bilk visitors of every cent in their pockets? 🙂

We talked a bit about Parkersburg’s early history, how most early residents arrived via flat boats that had shipped off from Pittsburgh. The region has a strong connection with oil and natural gas, but is transitioning away from a resource based economy.

Mark took me to lunch at the Parkersburg Brewing Company where I had an excellent coffee-stout. We started to tour around on foot and see the sights.

One of the first places we went was the Smoot Theater, a building over 90 years old. Mark said that a lady named Felice had “single handedly” saved the building. I was lucky enough to get to meet her, as she was rehearsing a high school barbershop quartet in the lobby. The building is beautiful. 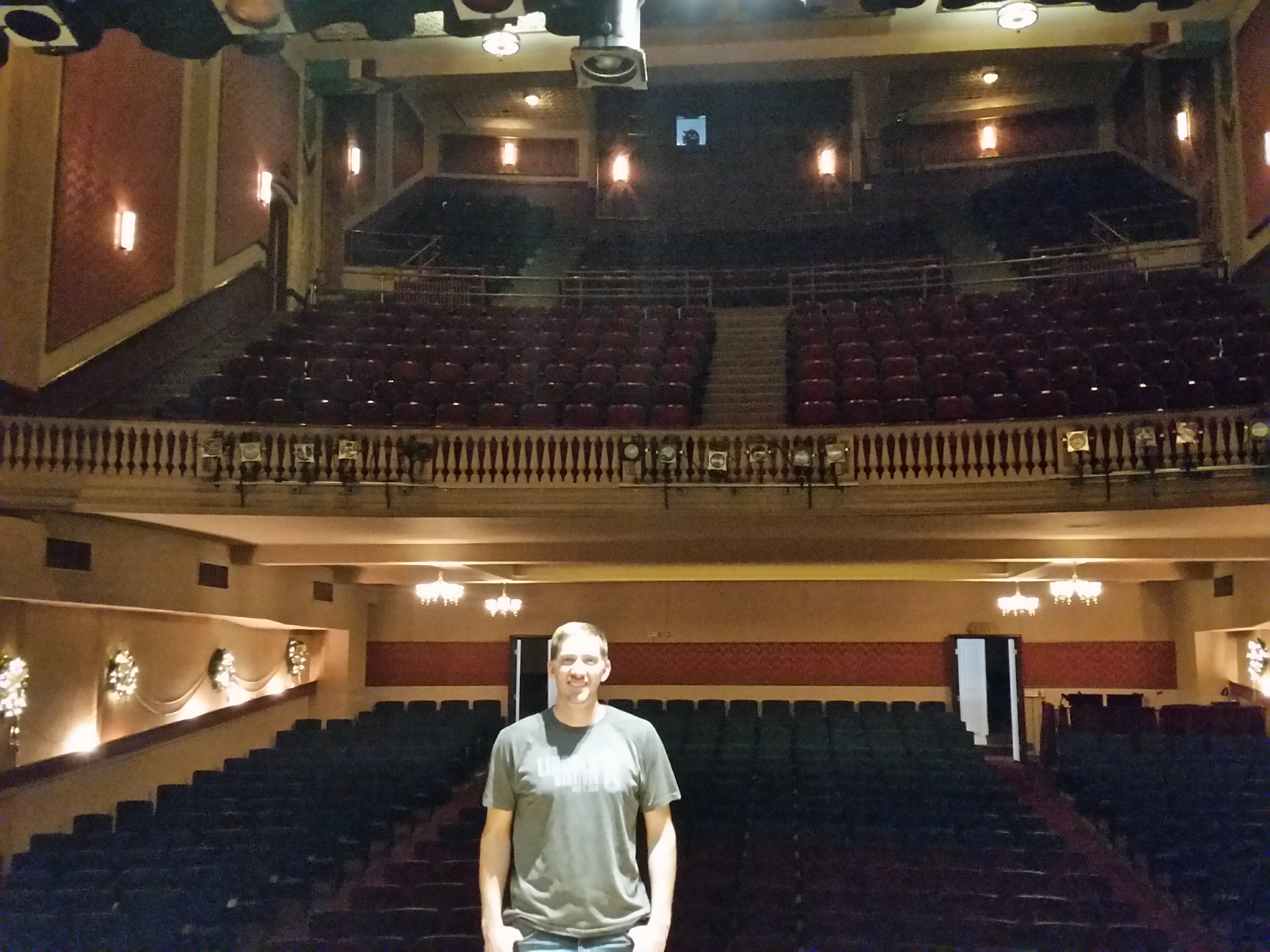 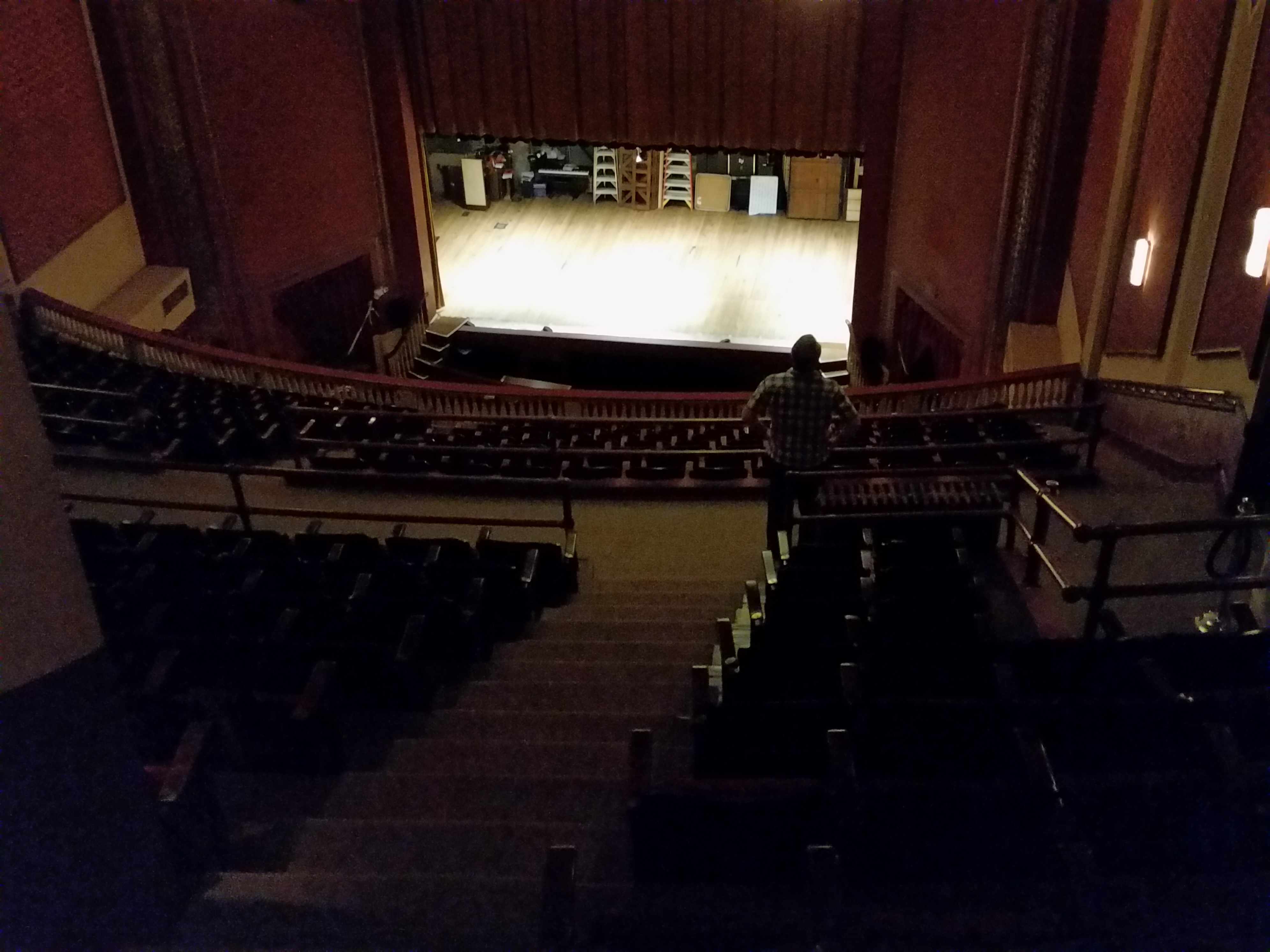 I can’t wait until the day I can come back and see a show here. So many places like this have been gutted, repurposed or completely torn down. Walking into this theater is almost like walking back in time. I cannot imagine the labor of love required to keep it in such good condition.

I had one more treat here. The quartet sang for me!

These guys were great. It was a wonderful welcome to West Virginia.

One of the “must do” activities in Parkersburg is to take the stern-wheeler out to Blennerhassett Island.

In 1798, Harman and Margaret Blennerhassett purchased this island and built a grand estate. As striking as it looks now, it must have been infinitely more so when the surrounding area was unsettled. The island is now a state park, which is supported with many generous volunteer hours from the people of Parkersburg.

The ride over was nice, but I’m not sure the captain knew what he was doing. 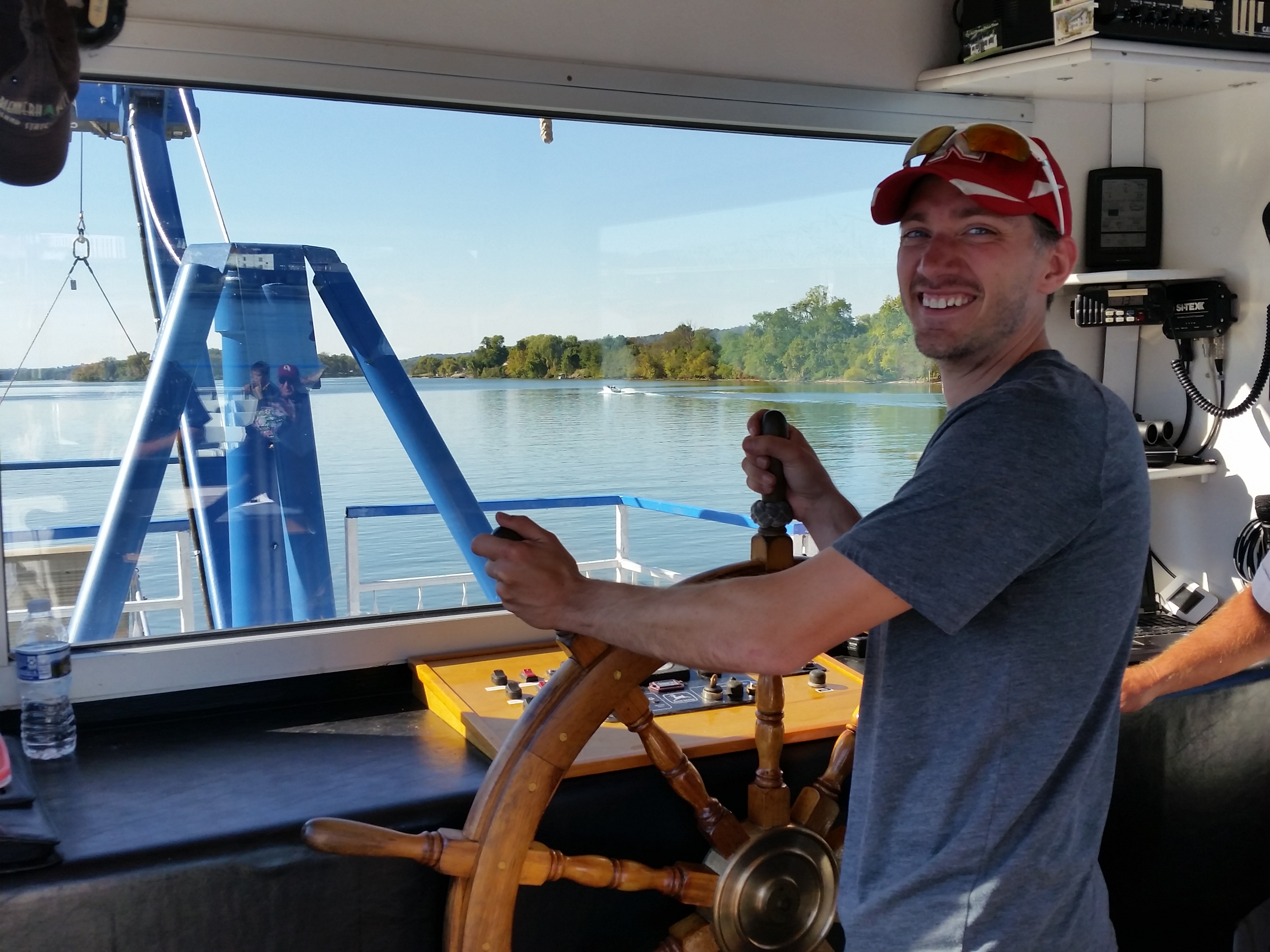 We were a little late in the day so we didn’t get to see everything, but we did get to tour the house. 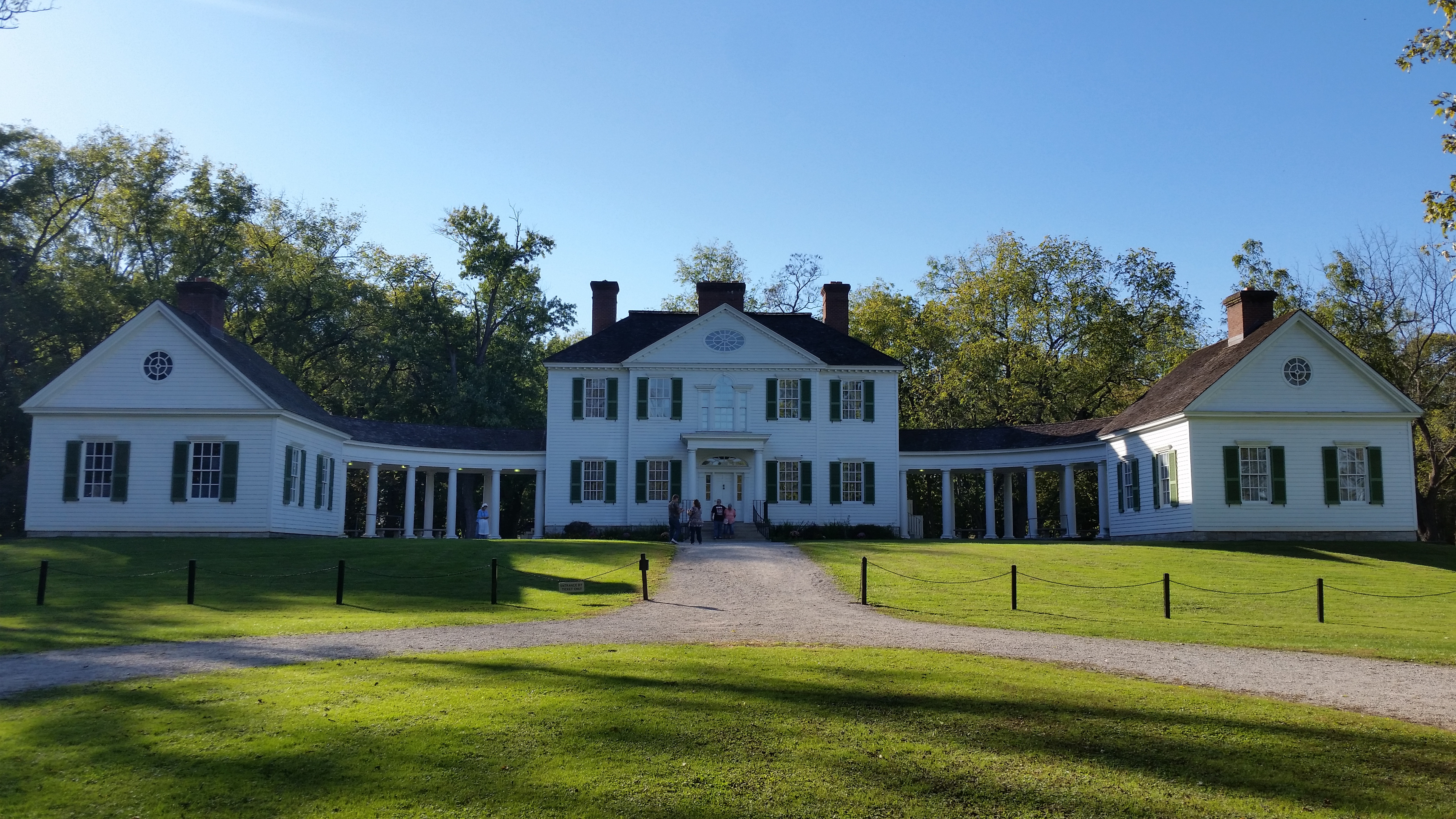 Though the original burned down, it was rebuilt in the same location with the same dimensions. The tour is guided by docents in period dress, who are friendly and knowledgeable (I like to ask a lot of questions). 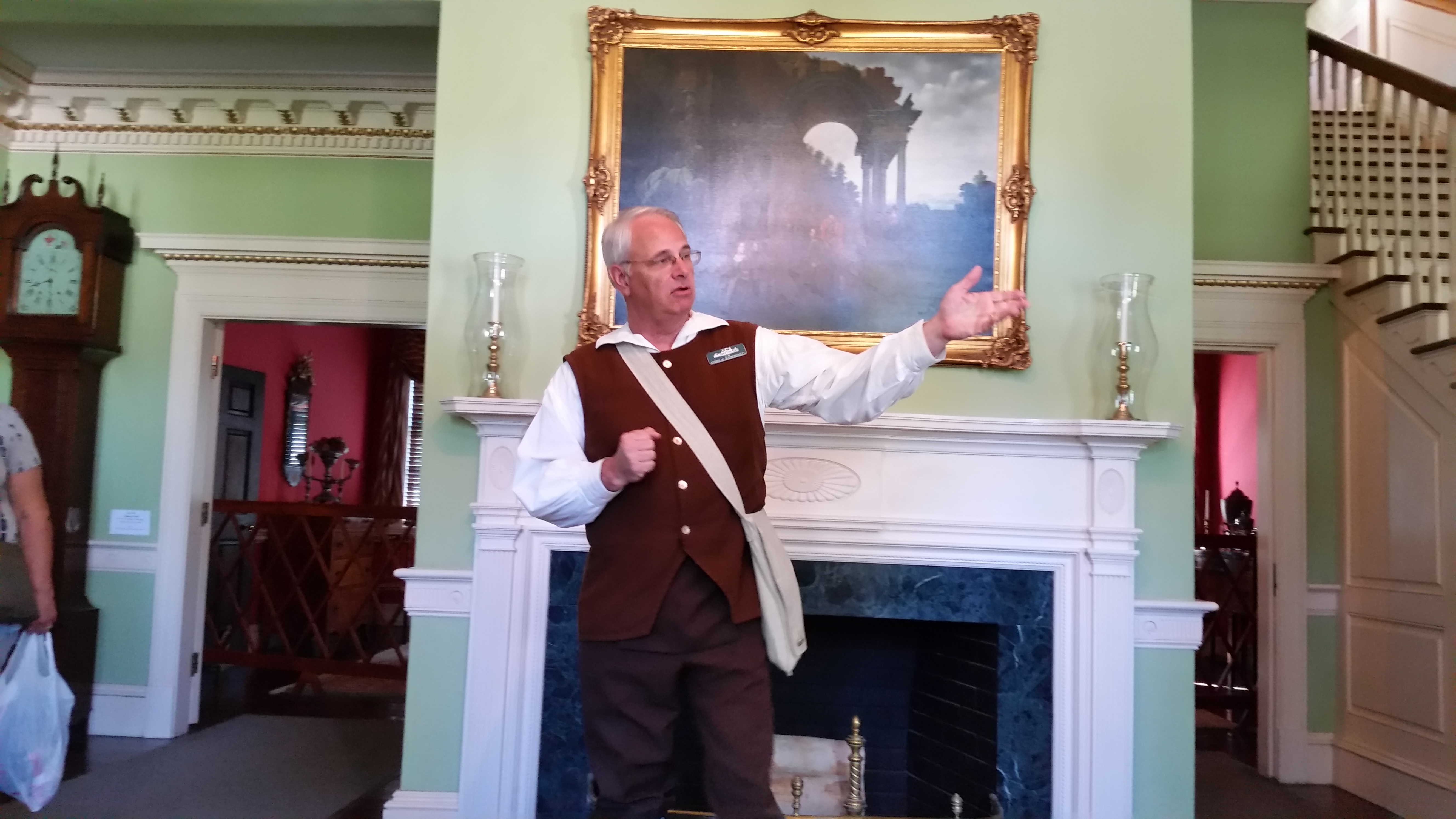 Once again, it feels like going back in time. 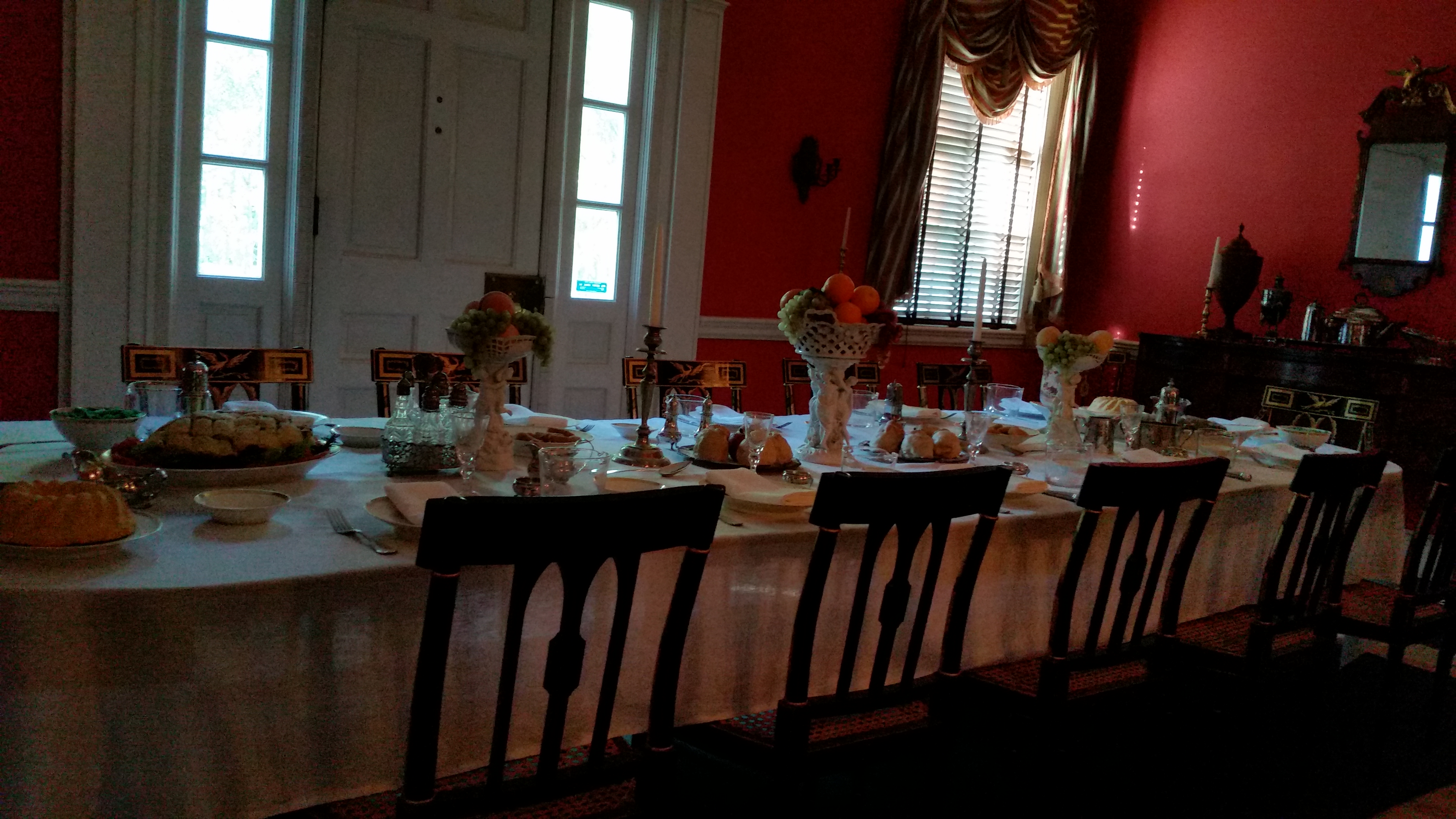 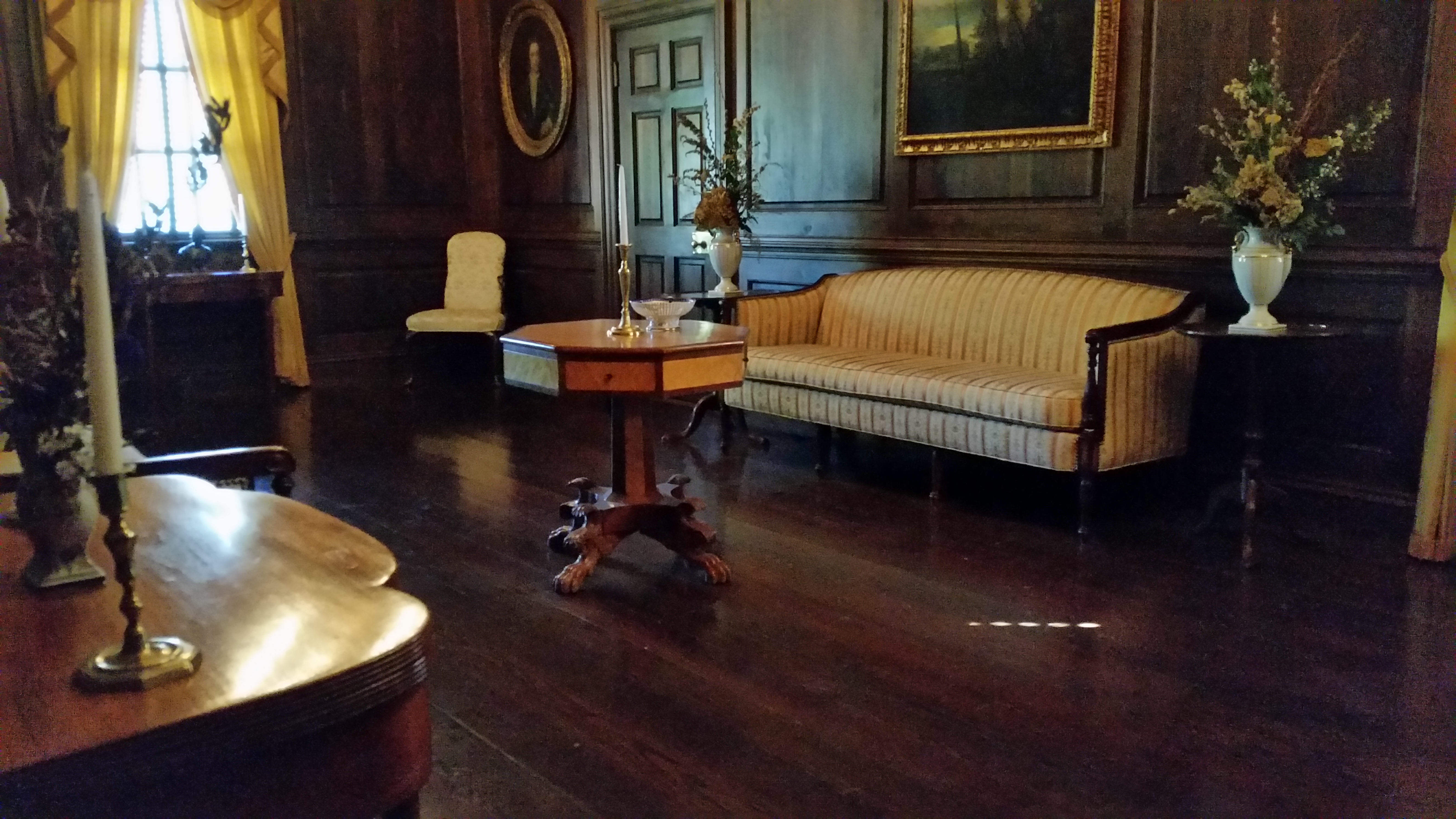 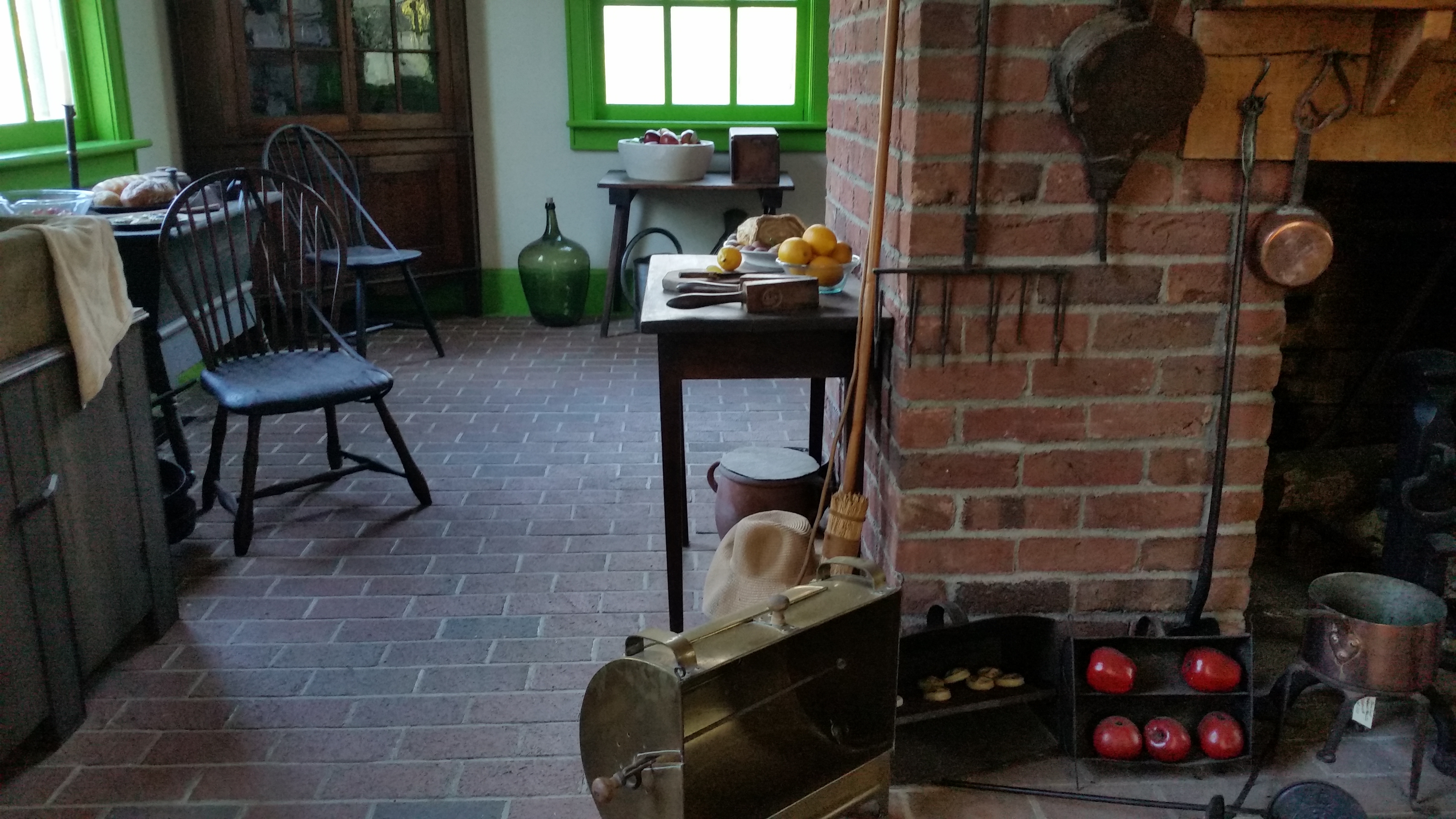 On the ride back to the mainland, Mark spoke candidly about some of the challenges that face both Parkersburg and West Virginia in becoming an attractive destination for travelers. It was so clear that he really loves this place. Even as we strolled up the street he would pause to pick up bits of trash, almost sheepishly.

I’m no expert, but I believe that a vital ingredient for the success of a place is to have people who love and care about it. Though I was just here a short time, I got the sense that this was definitely the case. As long as they stop catering to freeloaders like me, their future is bright.

Mark took my picture alongside the city’s massive floodwall. 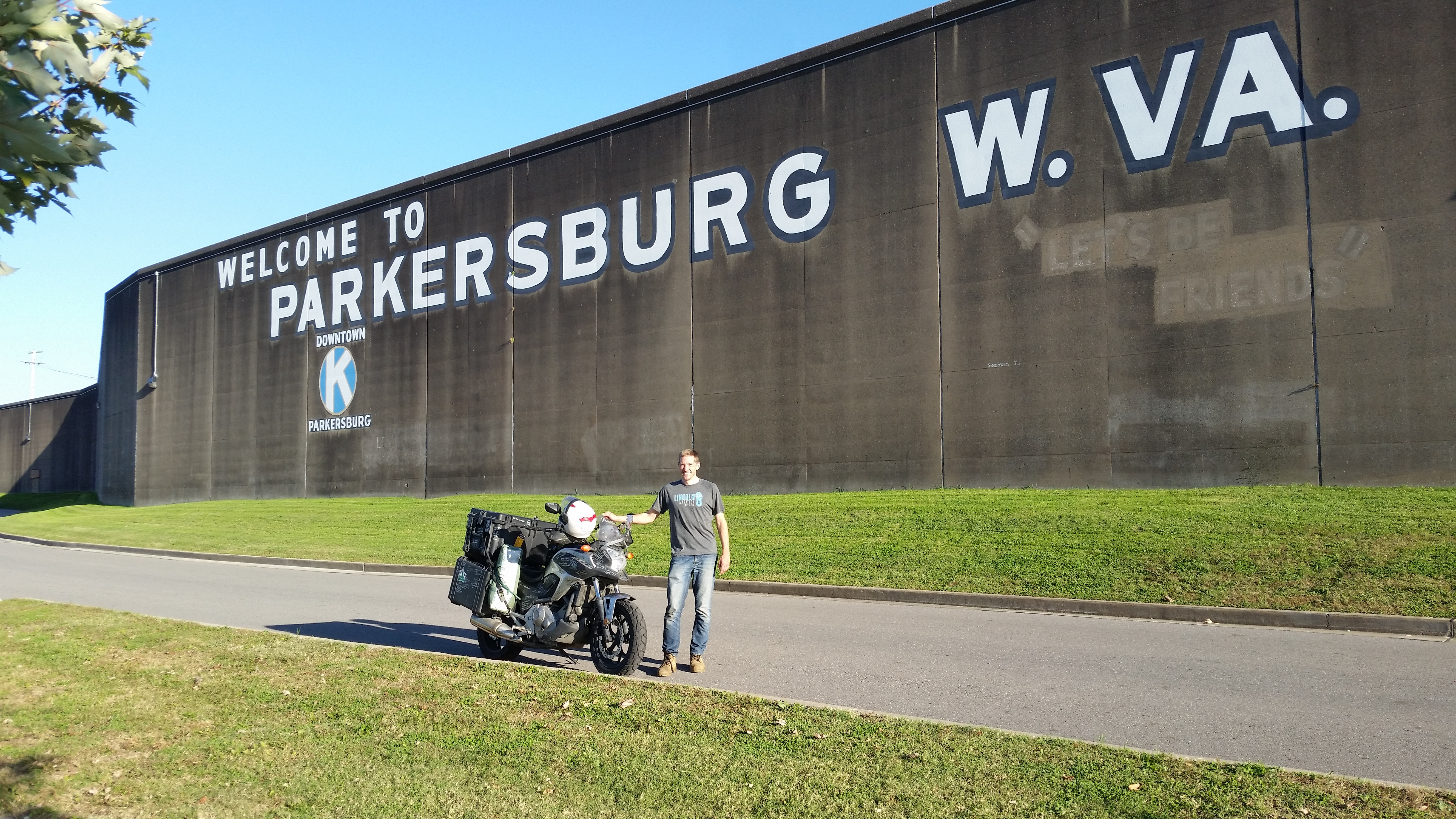 If I have one negative thing to say about Parkersburg, it would be this: They need to repaint the slogan “Let’s Be Friends” on this sign. I had seen it online prior to my arrival and was eager to get a picture of it. I’ve been a lot of places and seen a lot of slogans, but I think this one is the best. 🙂 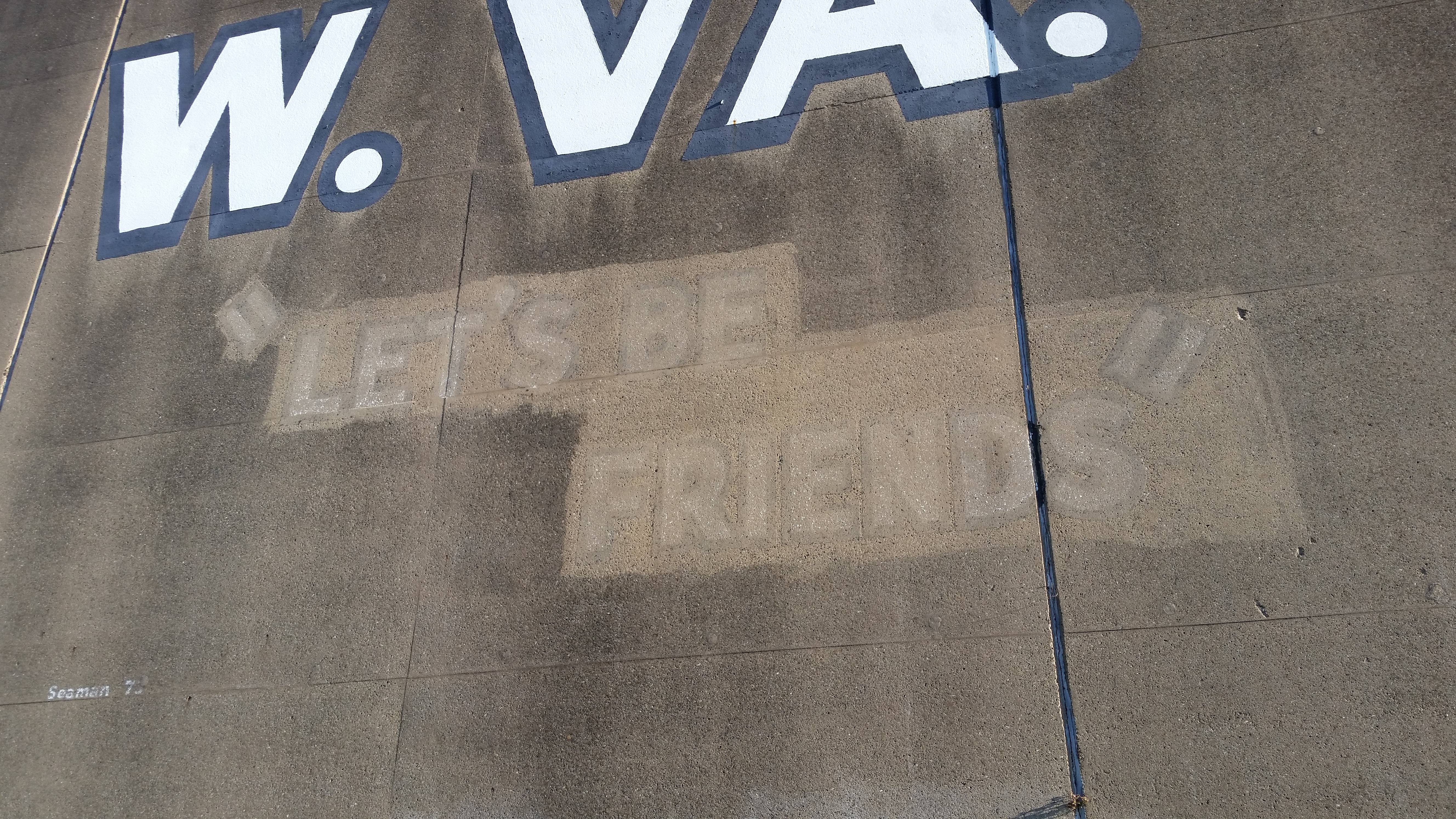 Naturally, Mark was the one to cross Parkersburg off of my sign. All told, he spent about five hours guiding me around the town. I can scarcely define my gratitude to him. I don’t know if I’ve felt like such an honored guest in any other song city. 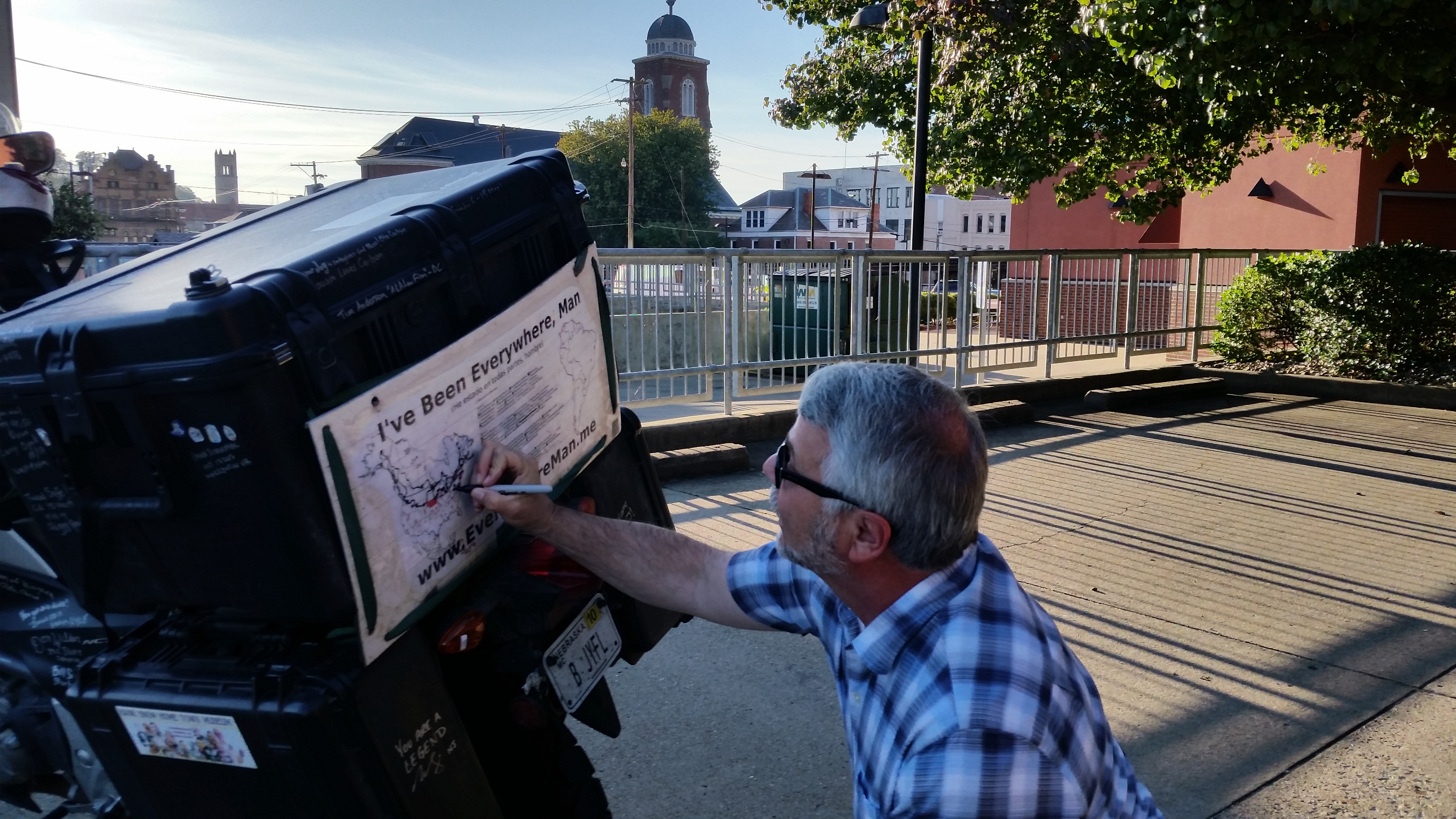 On my way out of town I knew there was one more silly picture I wanted, with an old mural on the side of the Smoot Theater. 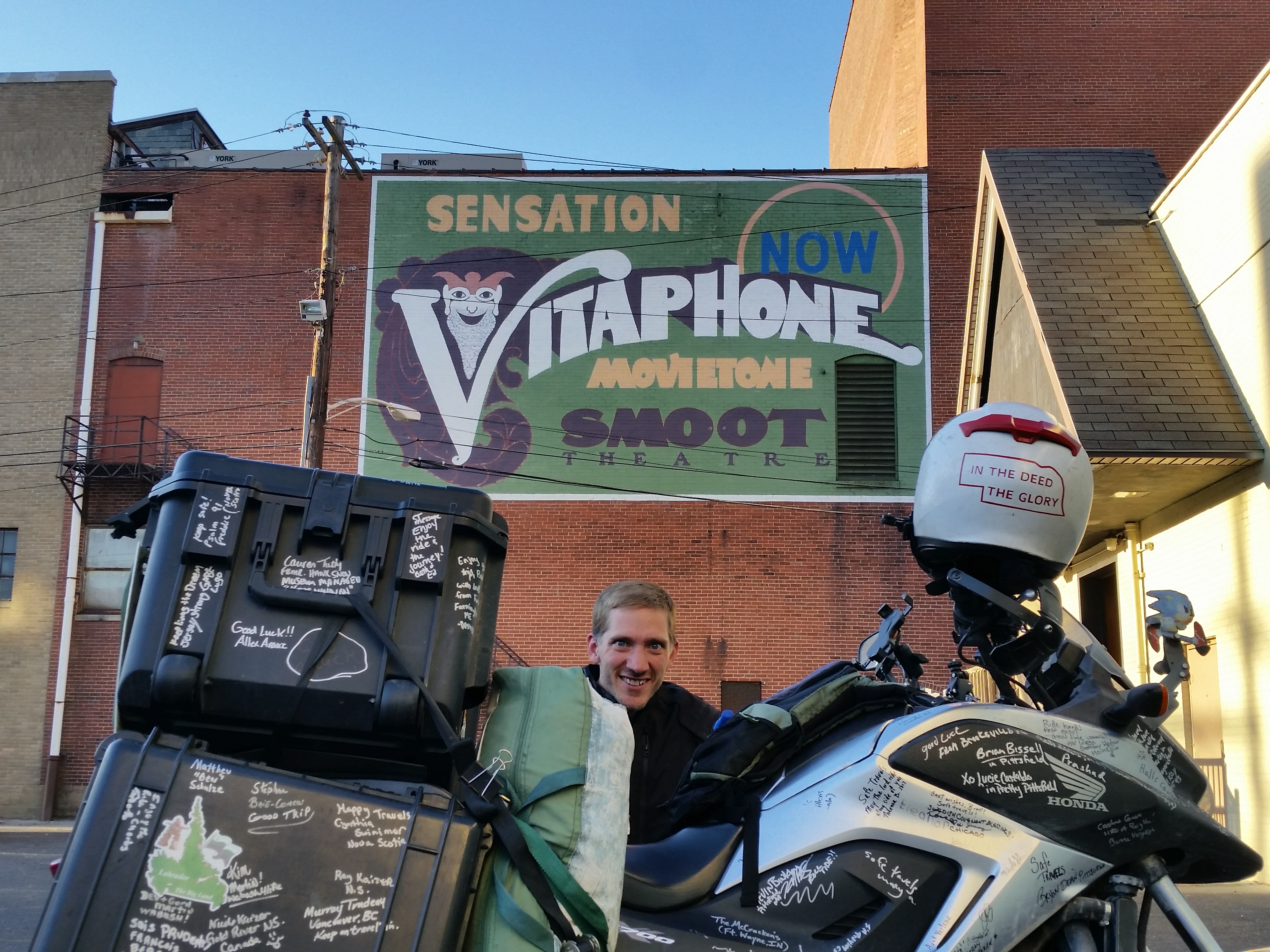 I can’t wait until my path leads back through Parkersburg. Furthermore, I would advise you to adjust your own to be sure to pass through here. Maybe you can spend some of the money I should have. 🙂

What an amazing time in all of these “Burgs.” I’m so glad that they were big enough dots on the map to be featured in the song. Hopefully now “Everybody’s heard about the Burg!”

Realtime update: Kind of some sad news. A couple days after I left Parkersburg, a massive fire developed at the O. Ames building. This building used to be the largest shovel plant in the world. The fire has been burning since Saturday and still continues. Please keep the whole area in your thoughts and prayers!

I am just finishing up in Louisville, KY and will be making my way towards Nashville later today.

5 thoughts on “Burg is the Word”