Two more places in the Volunteer State remain: Jellico and Knoxville. I visit a museum in a hardware store and cross a new “first” on the trip.

This song isn’t great, but might be the only one I’ve ever heard which has “sacroiliac” in its lyrics.

Approximate route of the day:

My initial temperature check revealed that it was above 40 degrees. I’ll take it! I packed up and wound my way down the nature trail, back towards civilization.

In a matter of minutes, I was on main street at place number 43 of 92: Jellico, TN. Jellico is a community of about 2,000 people, located in the NE corner of Tennessee on the Kentucky border.

My research had not revealed an ample amount about the place, but I came into town with an open mind. I did find out that there was a museum of local history, but the entrance was located in the hardware store. I knew that was a necessary stop.

While I waited for the town to wake up, I found some nice murals painted on a wall near main street. 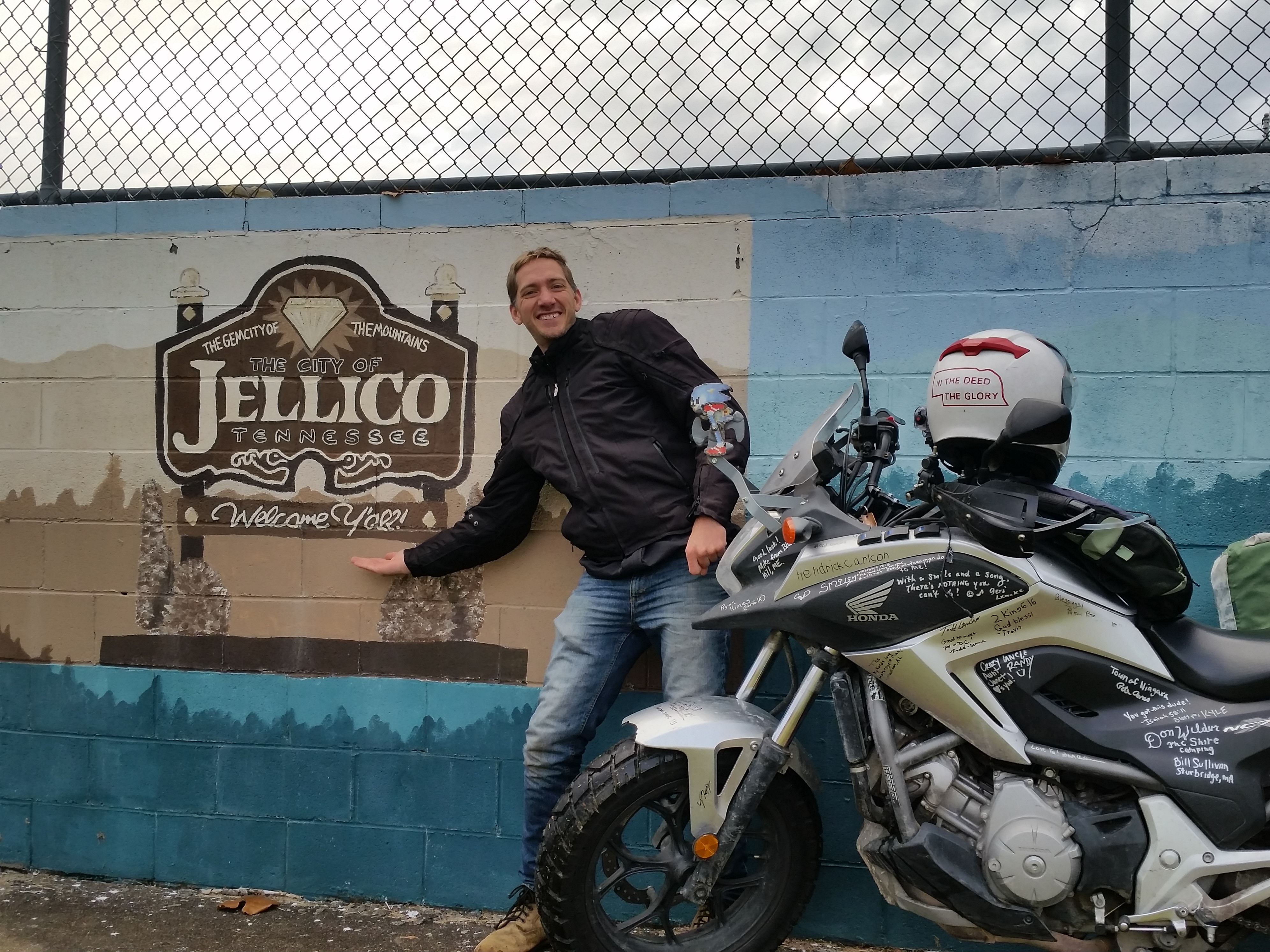 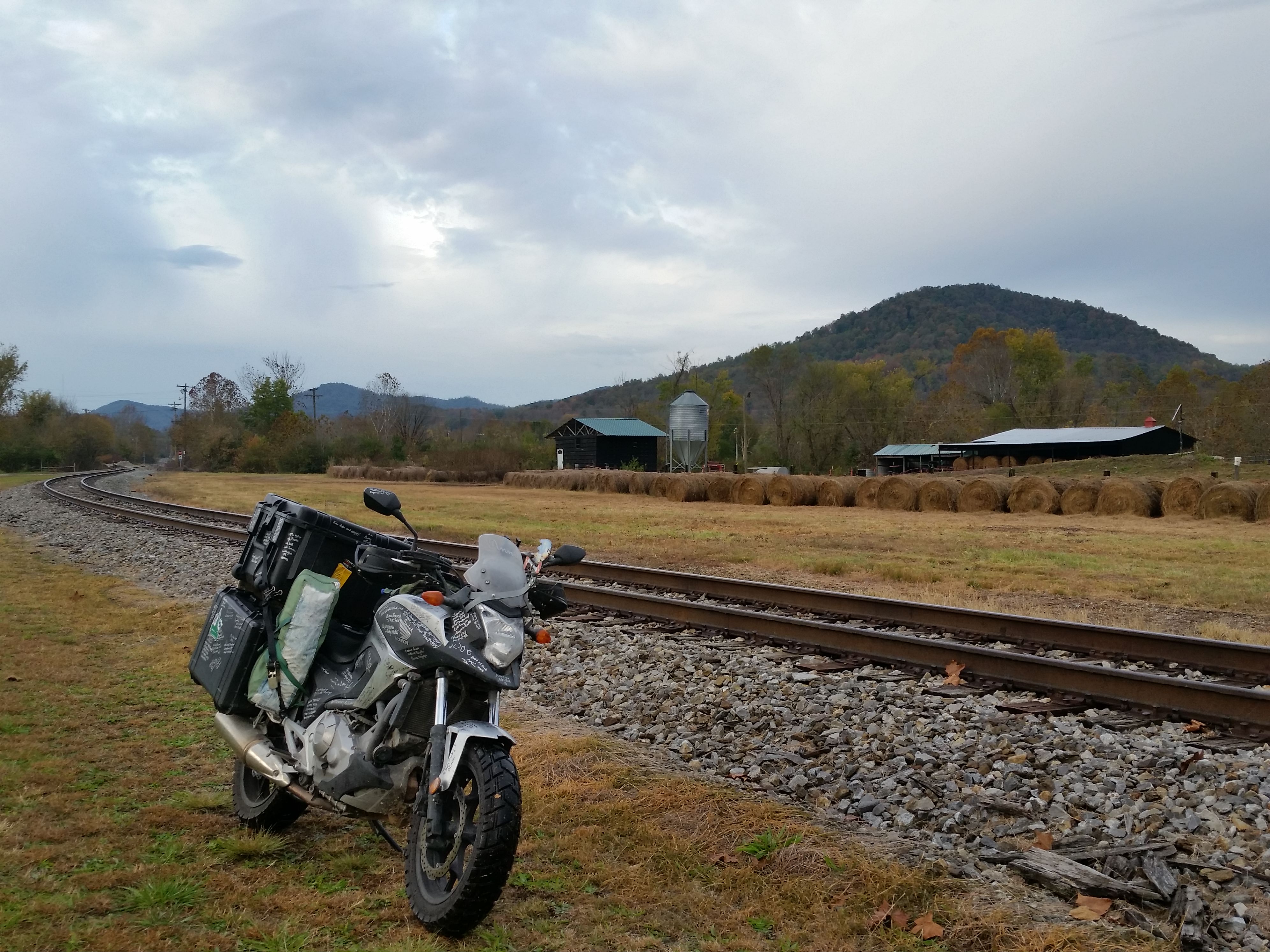 I sat on a bench across from the hardware store working on some typing, while I waited for it to open. I began meeting friendly people almost immediately.

At 9:00am, Buck’s Jellico Hardware opened up. Time to see what Jellico is all about. 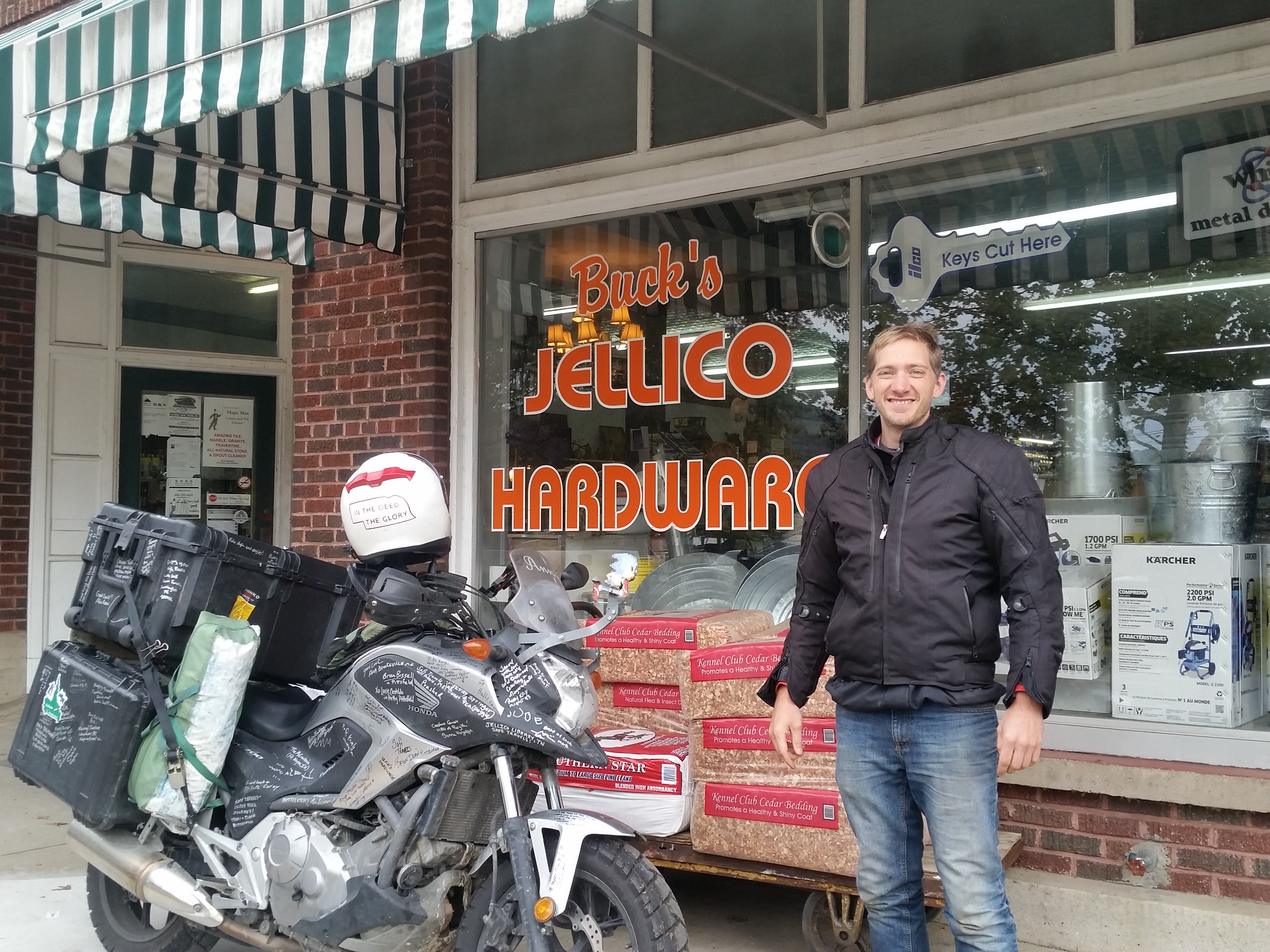 Ronnie Buck, the store’s owner, greeted me warmly. He seemed to know instantaneously that I had a story to tell and he seemed glad that I was visiting their town. As other patrons entered the shop, he would say something like, “Oh, this guy’s been here forever. You need to tell him what you are doing.”

Most every resident seemed to be familiar with the song, as well as with the fact that their little town was mentioned therein. I heard that both Hank Snow and Johnny Cash had played shows here.

Between customers, Buck spoke with me about Jellico’s history and the history of his shop. I’m not sure how to describe the place exactly. The store seems to have everything, though I would presume that Buck is the only one that knows where everything is. 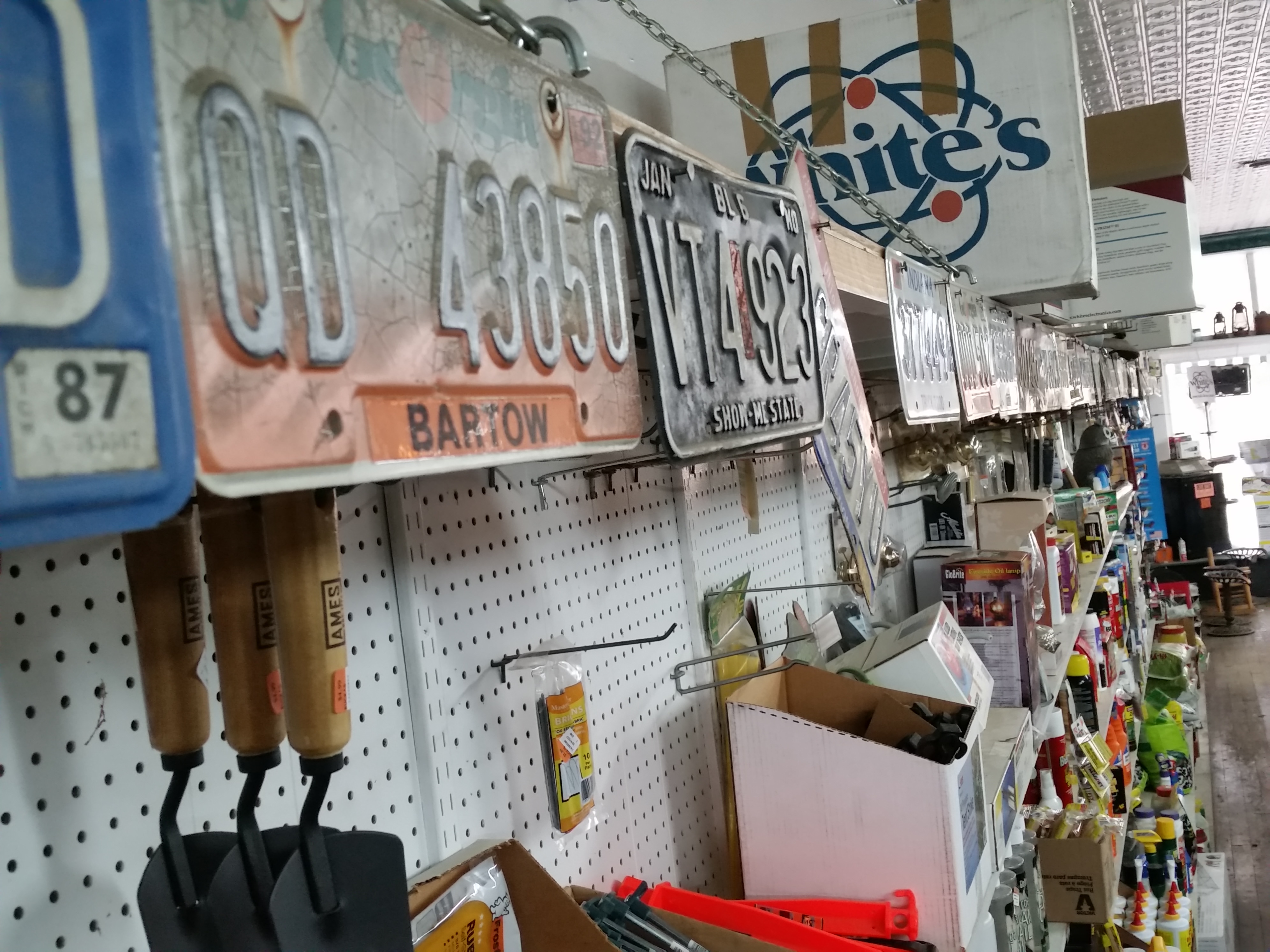 (They are lacking a Nebraska license plate. I intend to rectify this.)  🙂

It was enjoyable just to hear how he and other residents of the town interacted. There was a real sense of communal history among them, a common trait in smaller towns.

A pair of double doors on the north side of the store led into the Jellico Family Museum. Buck opened them for me and guided me through the process of turning all of the lights on. The sheer number of items was astounding. 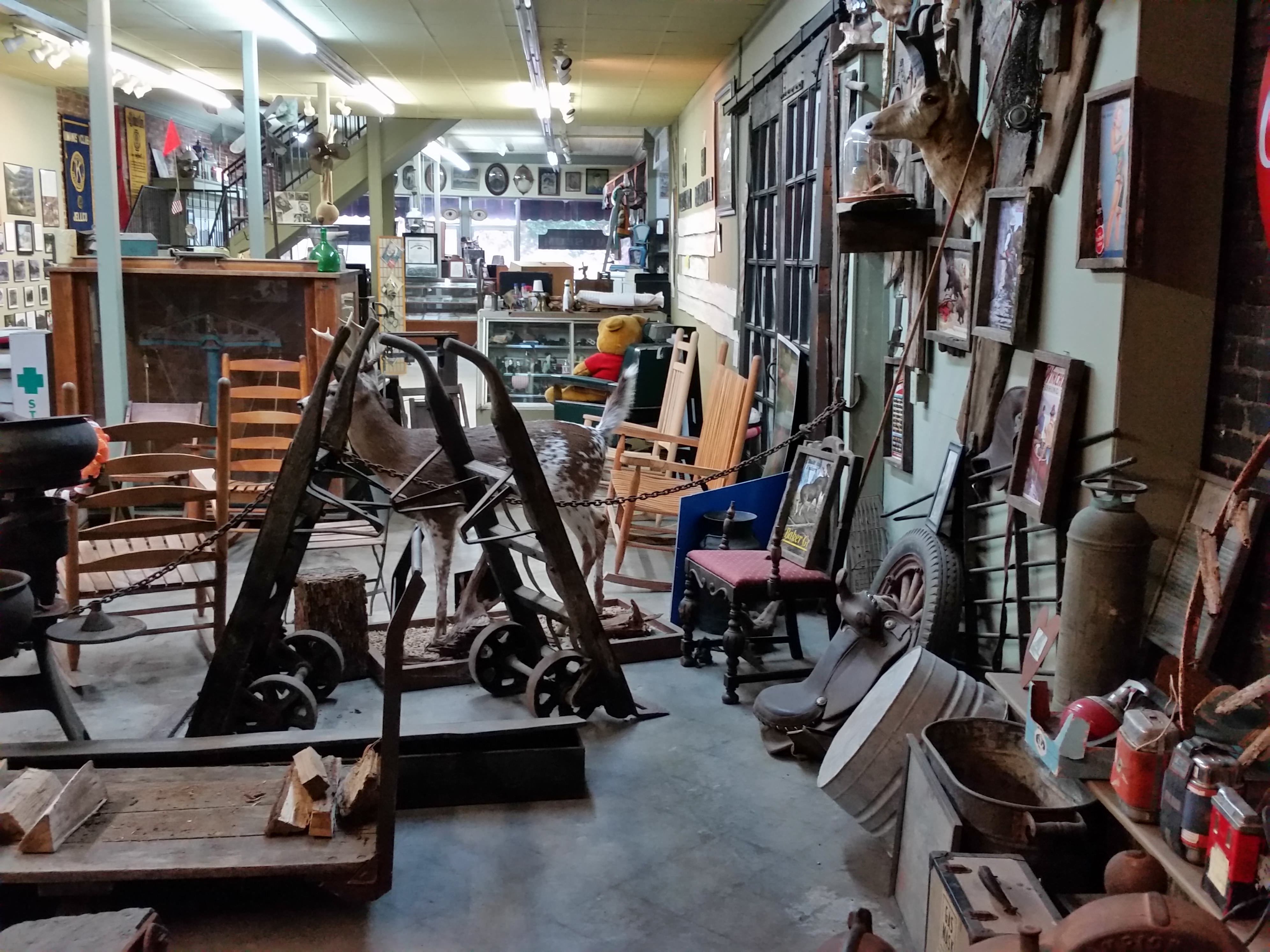 As I perused the two floors of displays, I was accompanied by Sam, the museum cat. 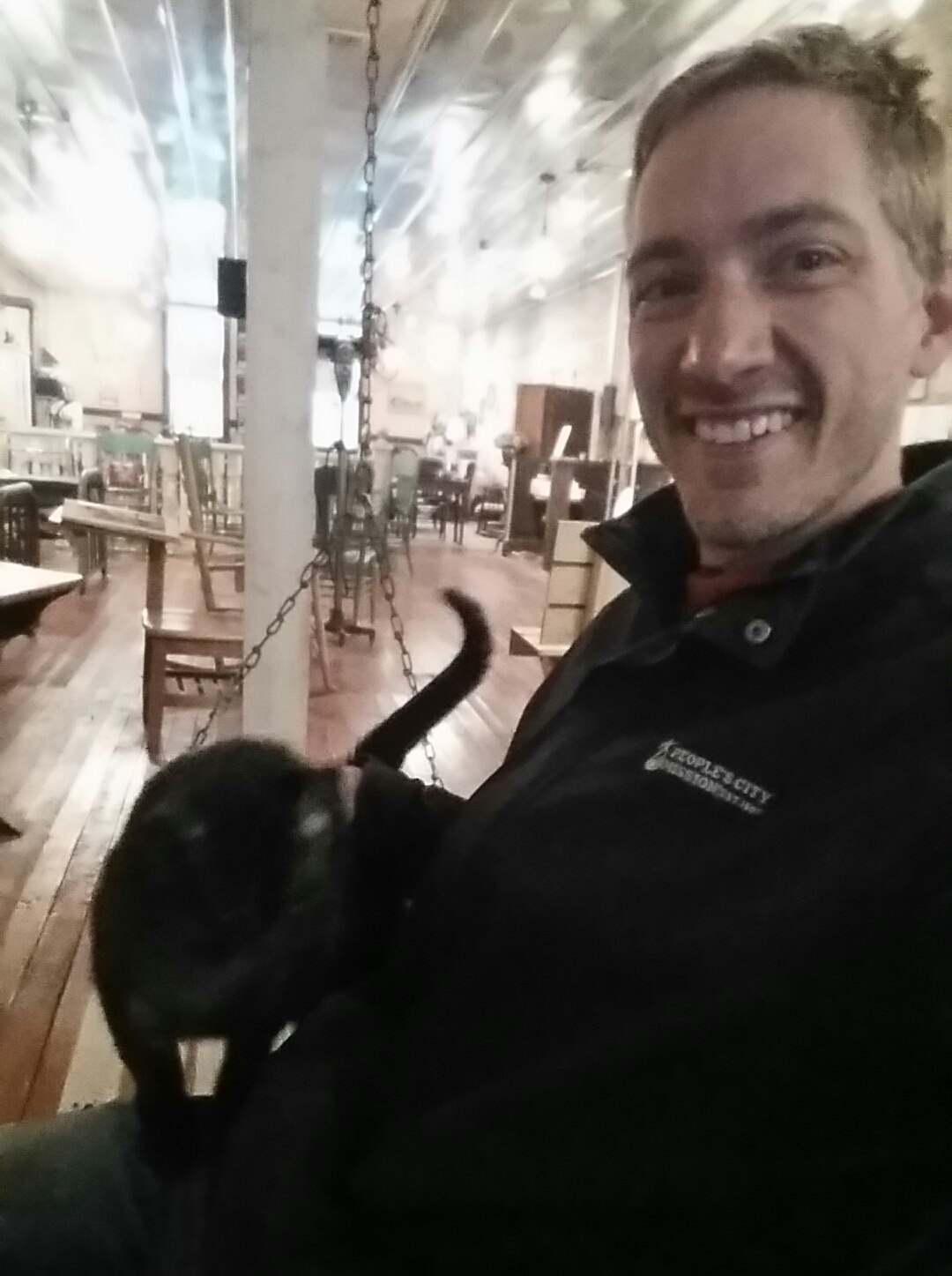 It was not the number of things that most impressed me. Rather, it was the care and detail with which they were explained. Nearly each antique, each newspaper clipping and each display had some sort of explanation attached to it. I cannot imagine the amount of time and care it has taken to catalog each item so thoroughly. 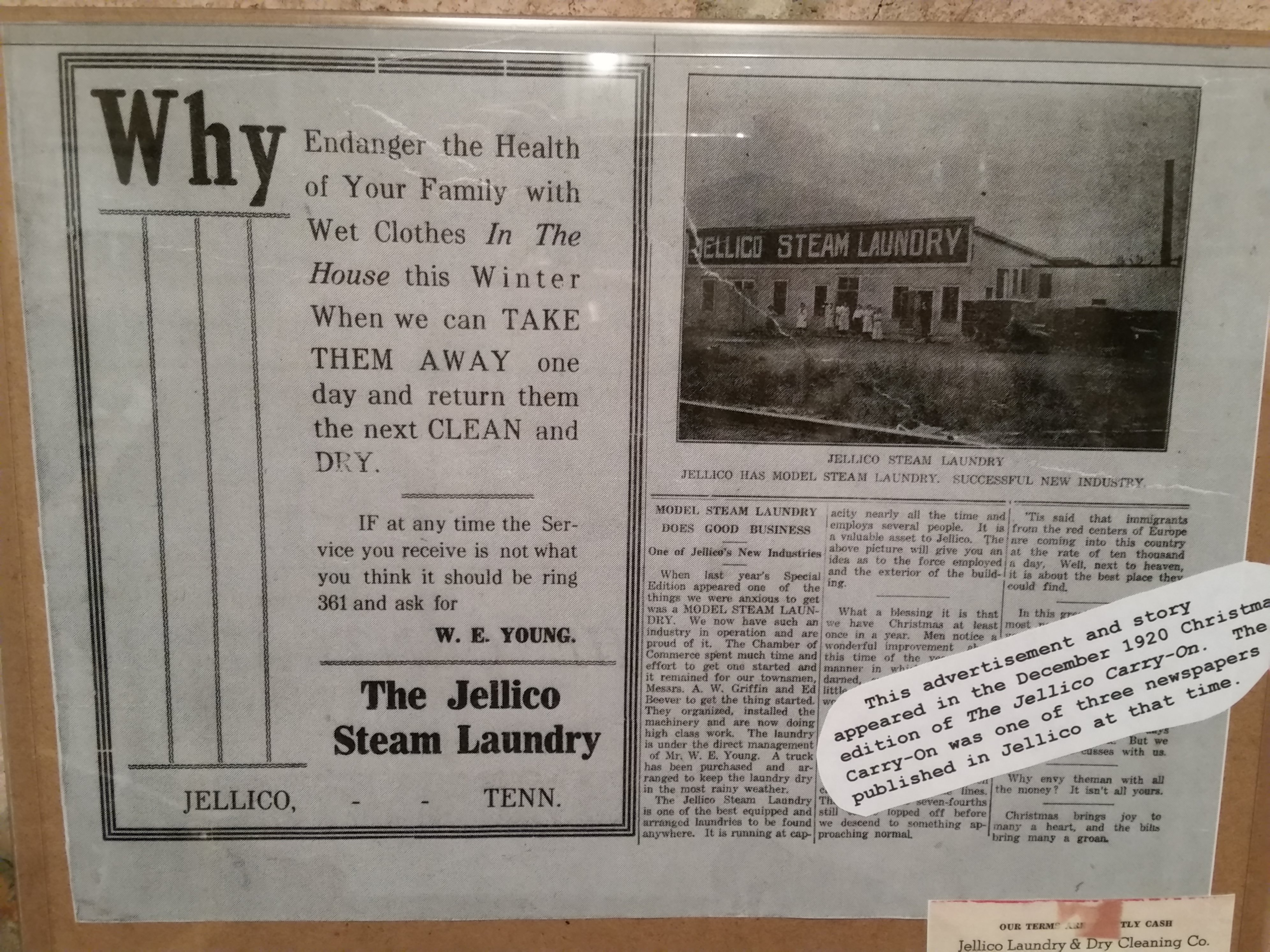 Jellico’s most notable resident is probably Grace Moore. She was an actress and operatic soprano who became very famous in the 1930’s. She died in a plane crash in 1947. Coincidentally, this crash also claimed the life of Prince Gustaf Adolf of Sweden, the father to Sweden’s current king. In 1953 her life was adapted into a film called So This is Love. 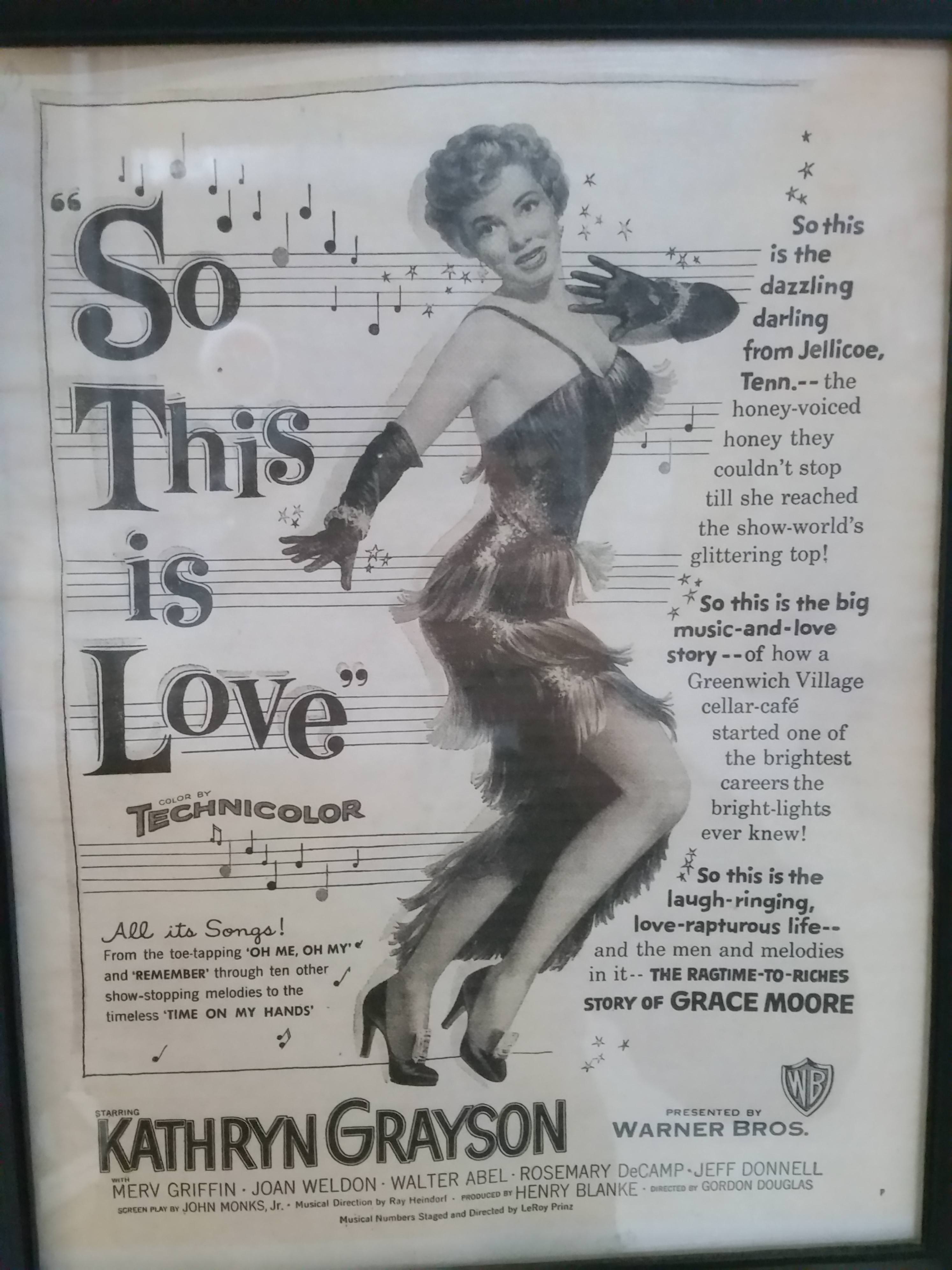 However, some Jellico residents were unhappy with this film, given that the film spells their town with an extraneous “e” on the end. 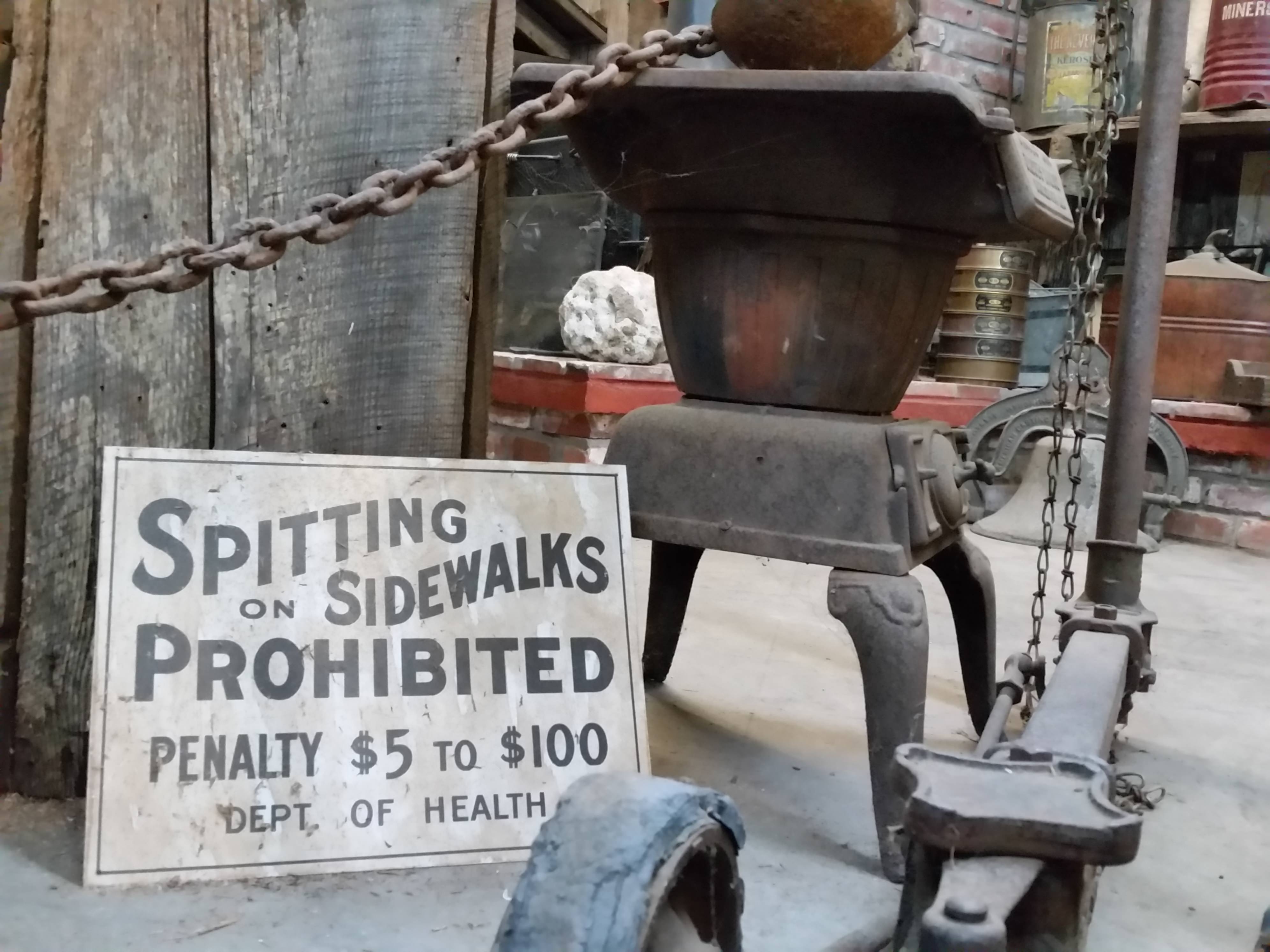 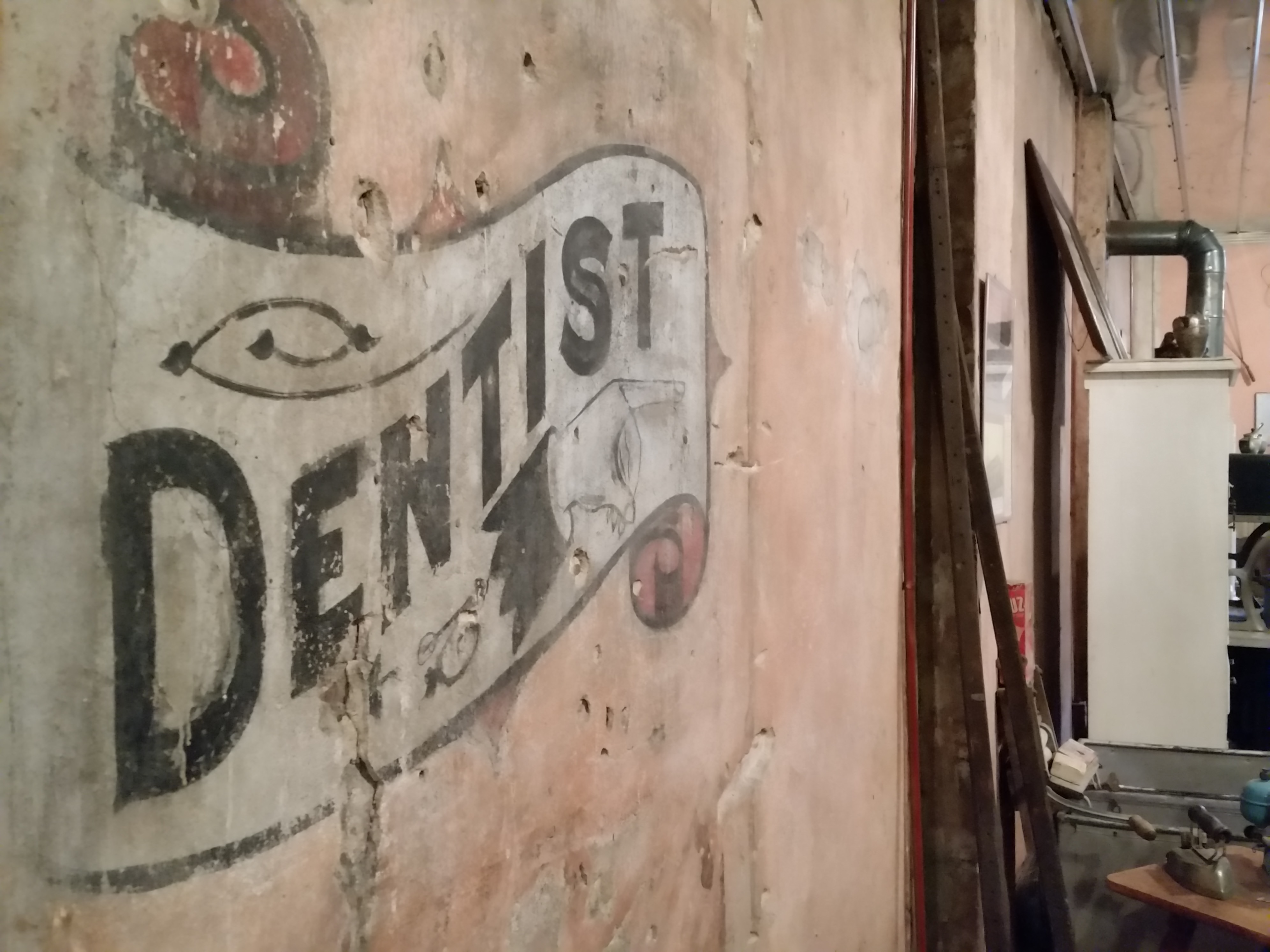 I learned everything I could have ever wanted to know about Jellico’s history from this stop. It was unequivocally the best hardware store/museum I have ever visited. 🙂

I asked Buck about moving Annie up onto the sidewalk for a picture with the store. This served to create even more buzz about the mysterious wanderer hanging out at the hardware store. So many people asked about my story, took my picture and wished me luck.

As I worked at the library just a couple of doors down from Buck’s, I was pleasantly interrupted multiple times by people asking to take my picture next to Annie. On one of the occasions, Buck emerged from his store saying, “I have an idea.”

This was his idea: 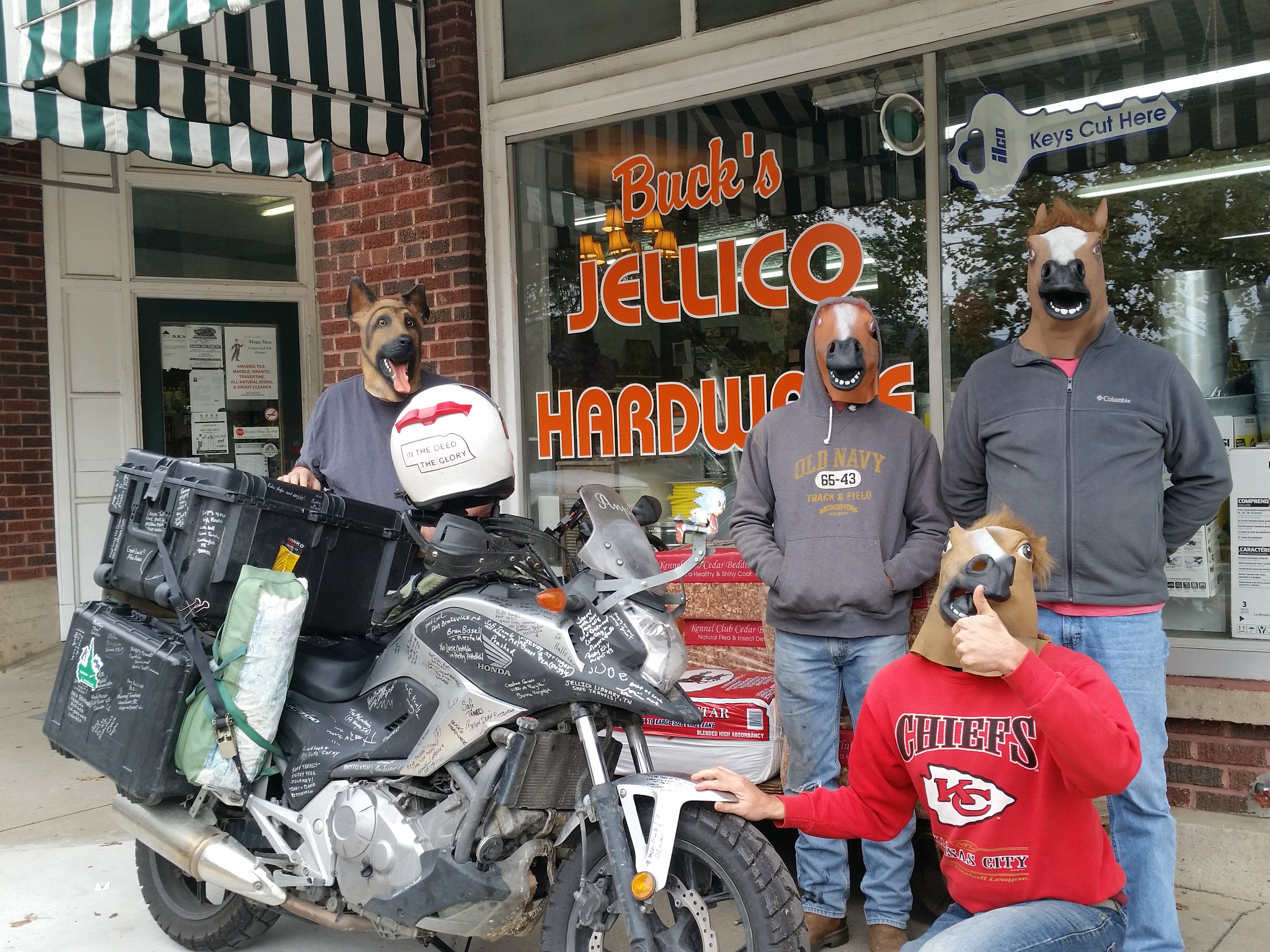 I can’t tell you how much I love this picture. I don’t know if it perfectly defines Jellico, but it is an apt description of my time there: Meeting random people who are open, friendly and relaxed.

The rightmost “Horseface” (AKA Eddie) is actually a teacher and an author. He gave me a signed copy of his book on the 1906 explosion that took place in Jellico. I’m eager to get a chance to read it. 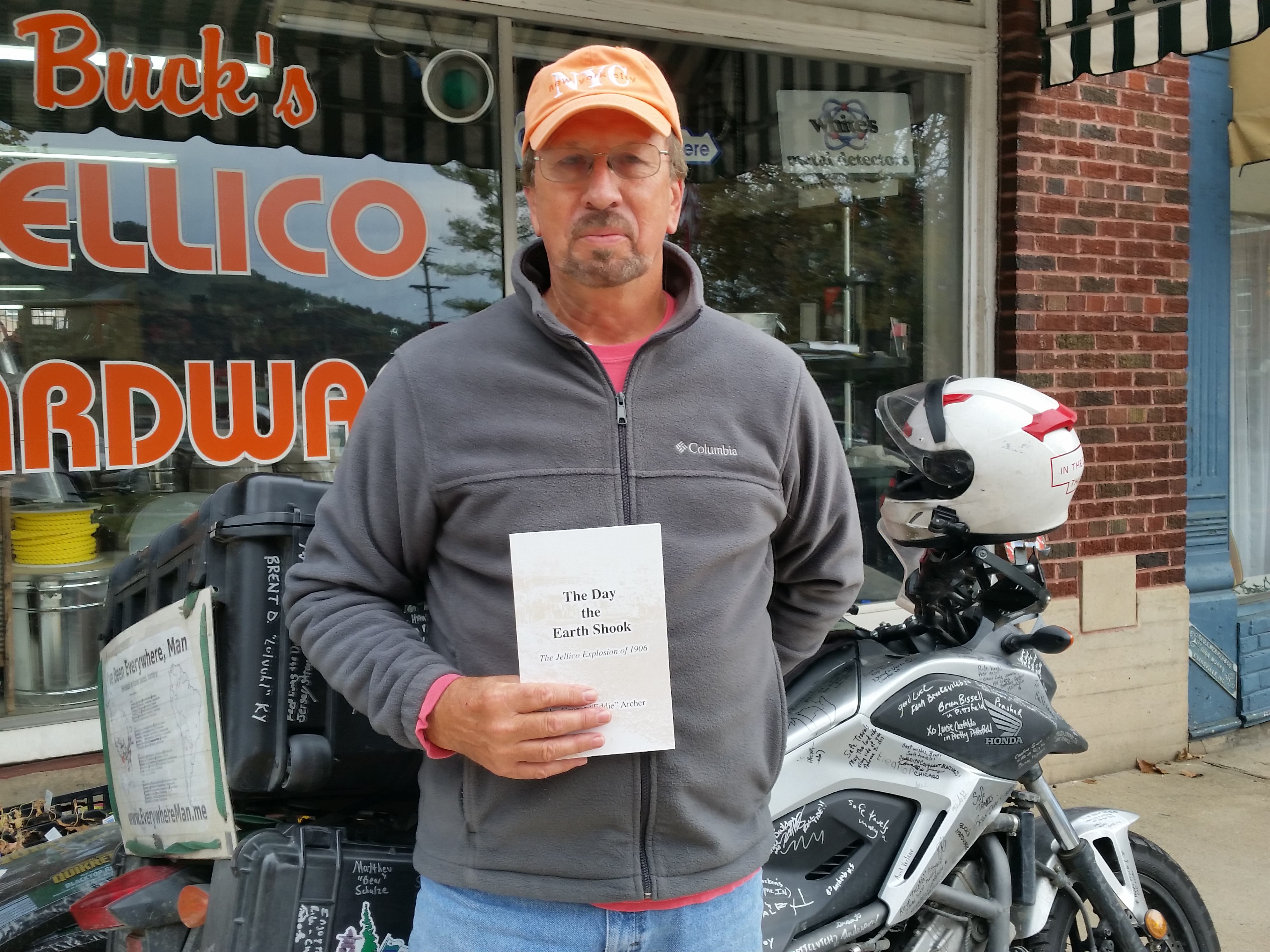 Buck accepted the honor of crossing off Jellico. 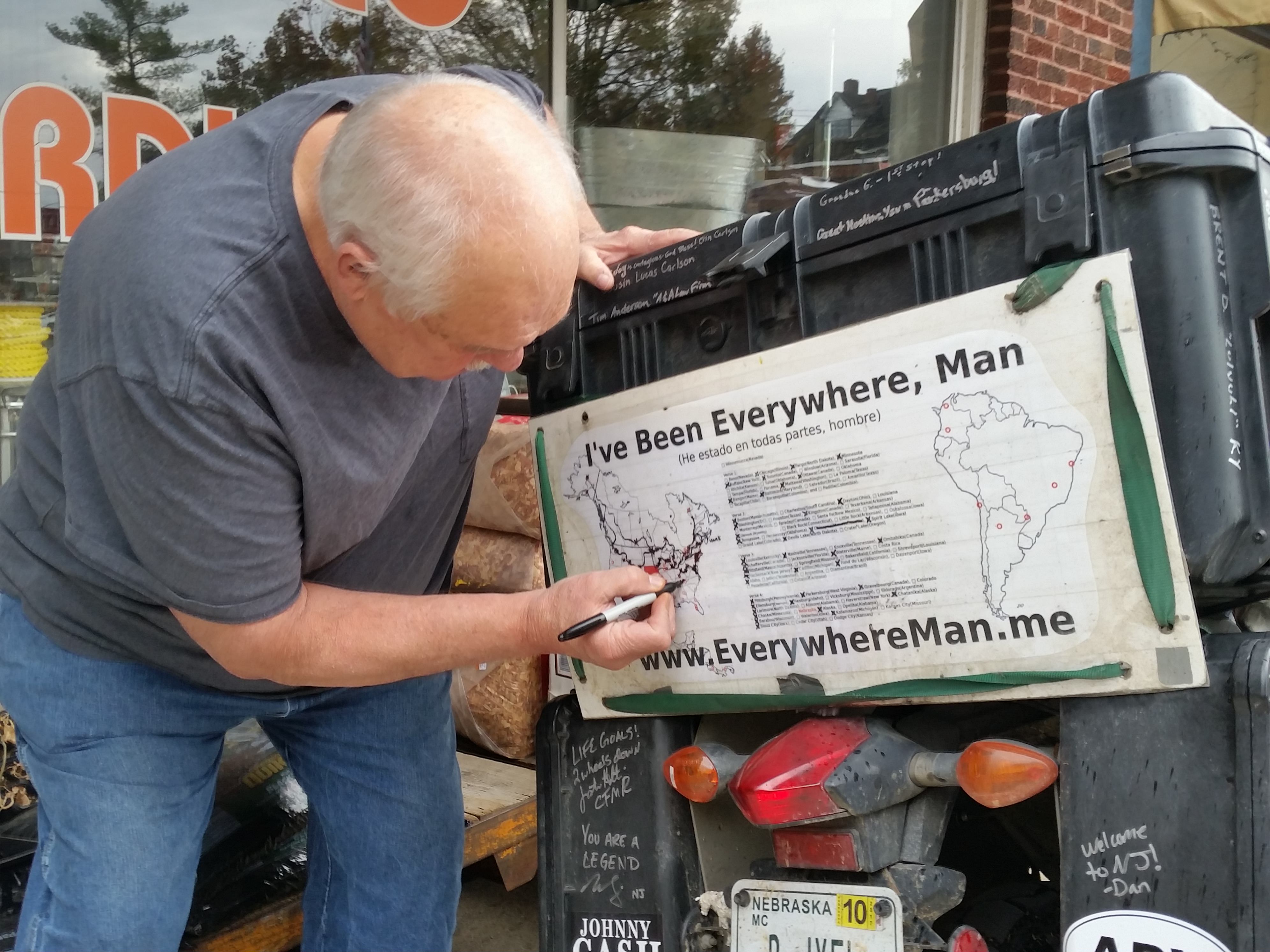 He also gave me a free “Buck’s Hardware” T-shirt. 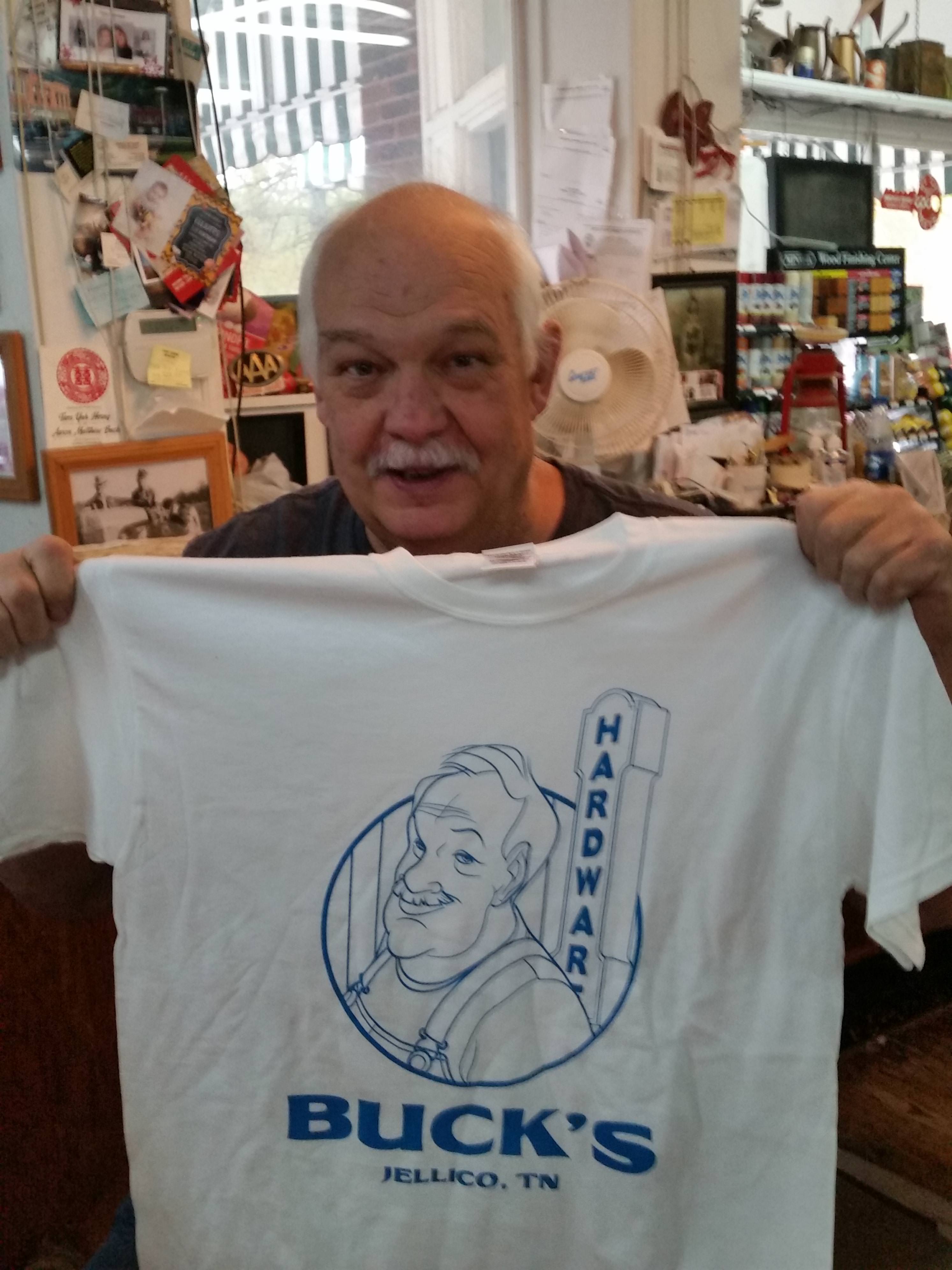 I wish I had time to write about each person I met and all of the great conversations I had. Unfortunately (fortunately?) they were too numerous to list.

Jellico does have its challenges. Many long-time residents remarked how the town is not what it used to be. Like many small towns, much of the younger populace have relocated to larger cities. Opioid addiction is also a real issue in the community. Still, the people here seem both resolute and compassionate, a combination well suited to meet any challenge.

The edge of town, on the Kentucky border: 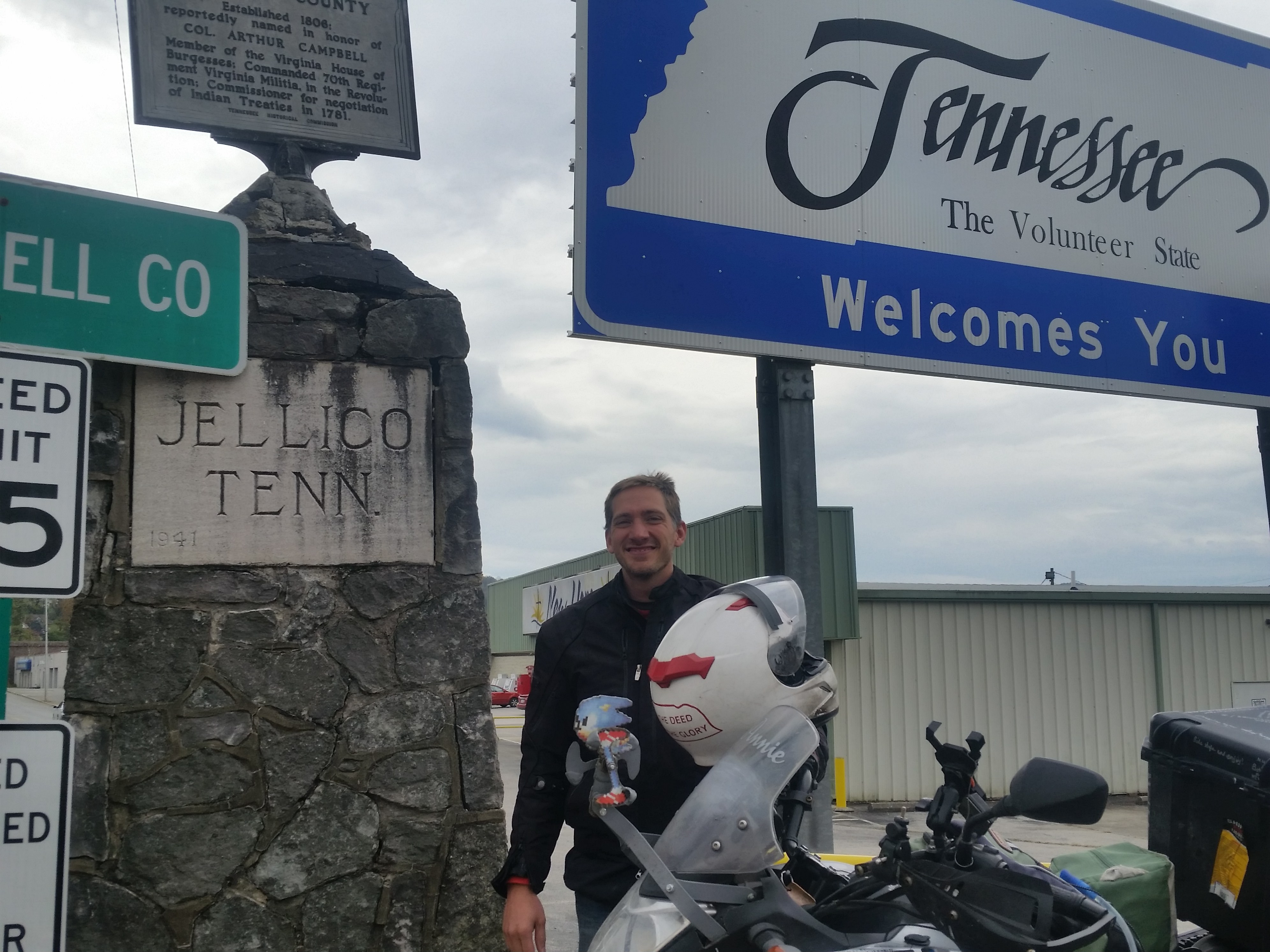 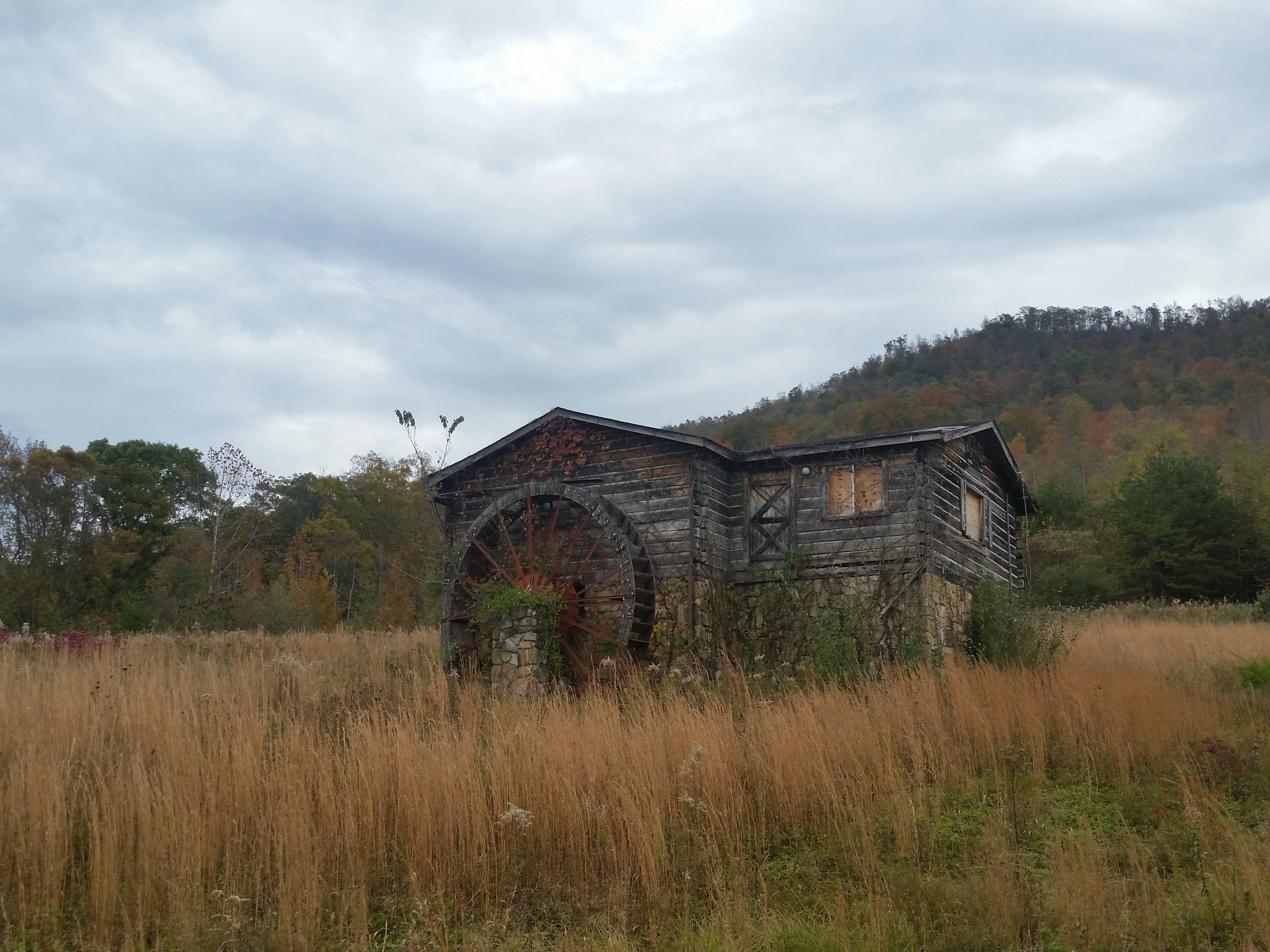 Even as I took a final video of a ride down Main street, a new friend of mine waved goodbye.

A couple of days after my visit I was contacted by the local newspaper and had a really nice interview with them. I do hope my path will pass through Jellico again.

My heart was really touched by my experiences of the day, but I had to put my game face back on. There was one more “step” to my dance of the day! My next stop, Knoxville, TN, was just a short drive down I-75. This drive was actually really scenic, as it runs along a mountain ridge. Unfortunately, there are no scenic pull offs.

I was a bit late in the day when I reached Knoxville. I rode around a bit on the campus of the University of Tennessee. Photographing the stadium proved to be a bit of a challenge, this was the best I could do: 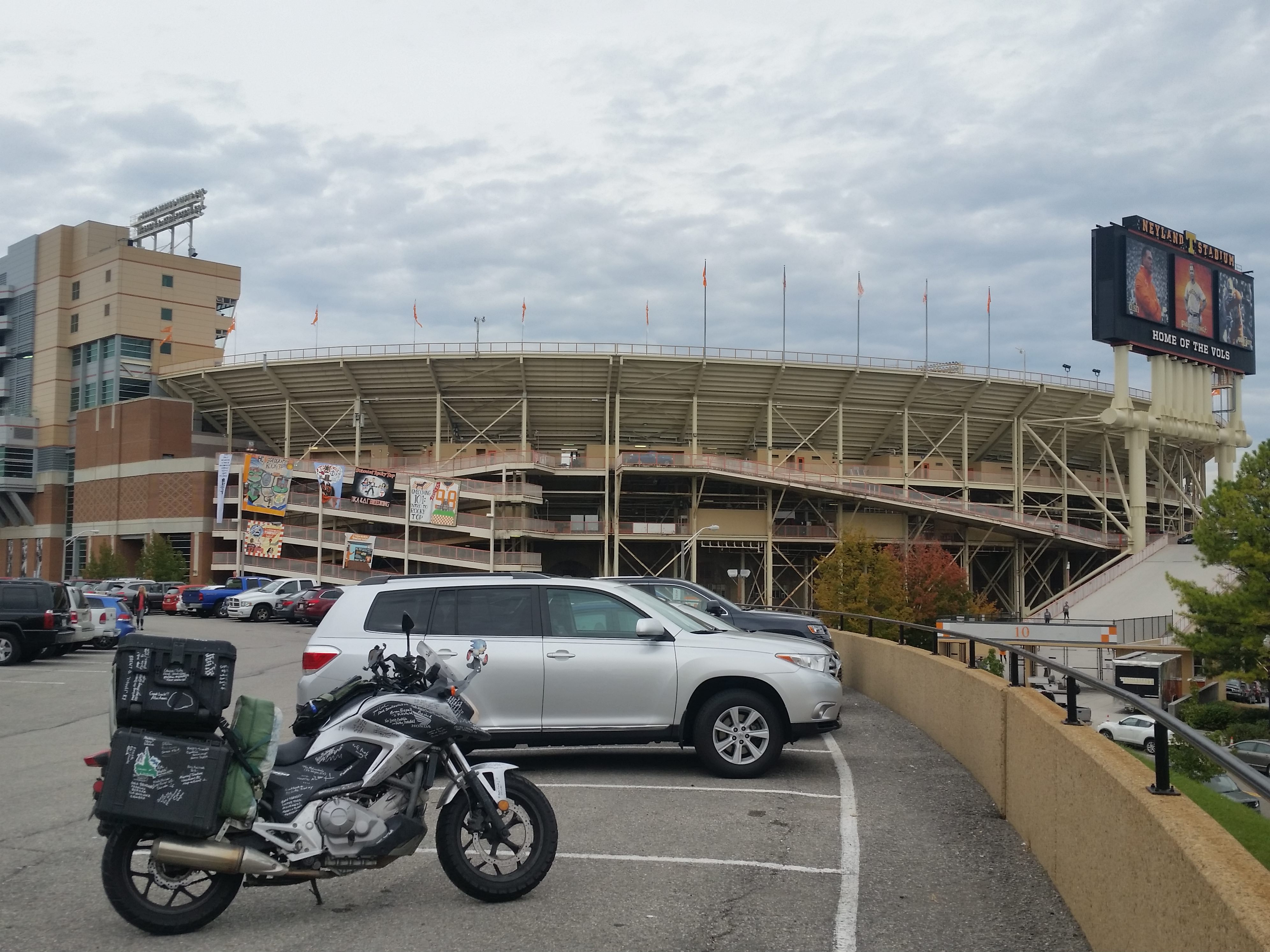 A guy named Logan in Nashville had recommended the Sunsphere as a backdrop for an iconic Knoxville photo. The building was erected in 1982 as a symbol for the World’s Fair. I scouted around downtown until I found a good spot for a picture. 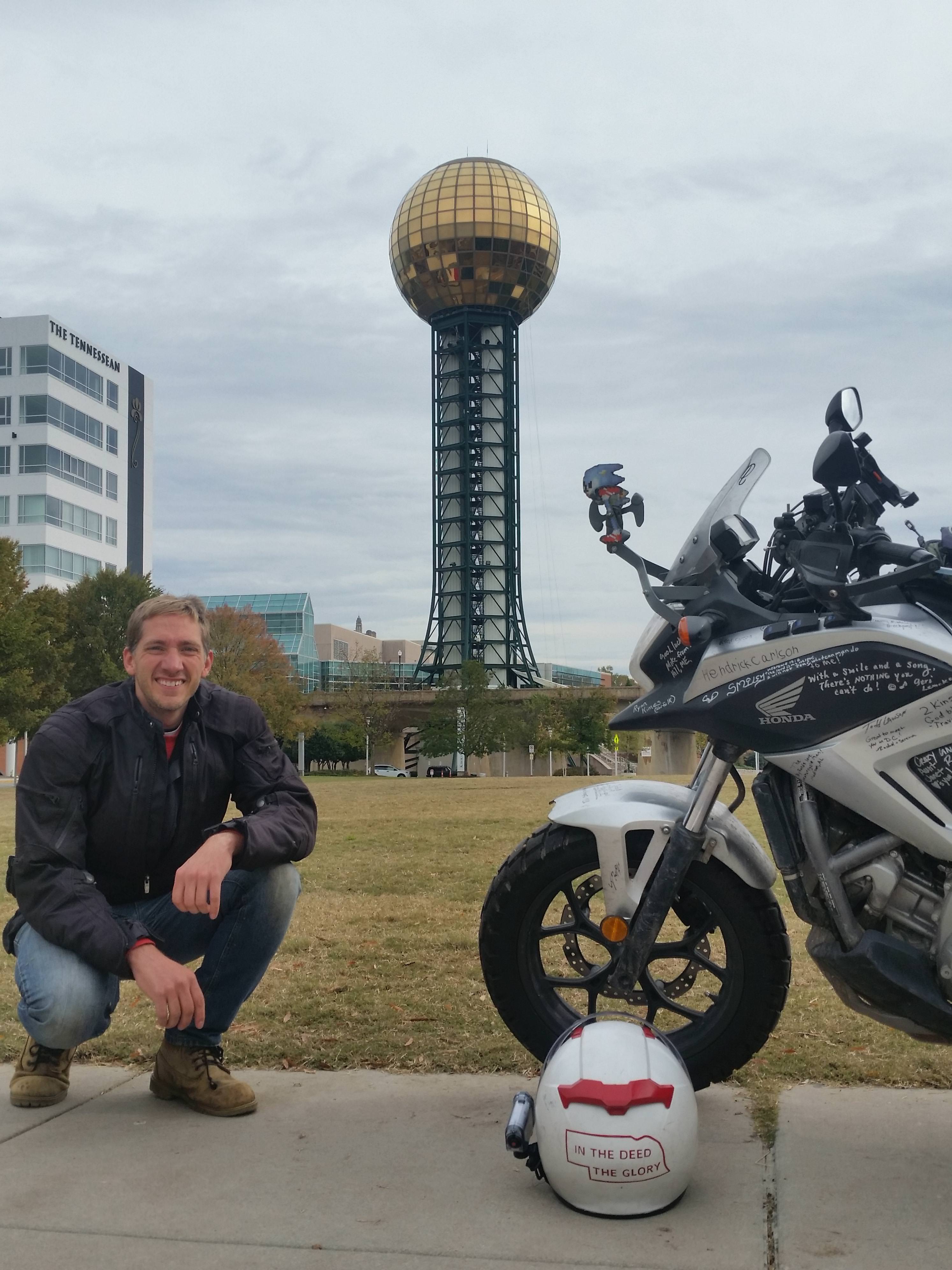 There was a museum of local history that I wanted to visit, but I was just a bit too late. I wandered around Gay St. for a bit and saw some more of the sights. 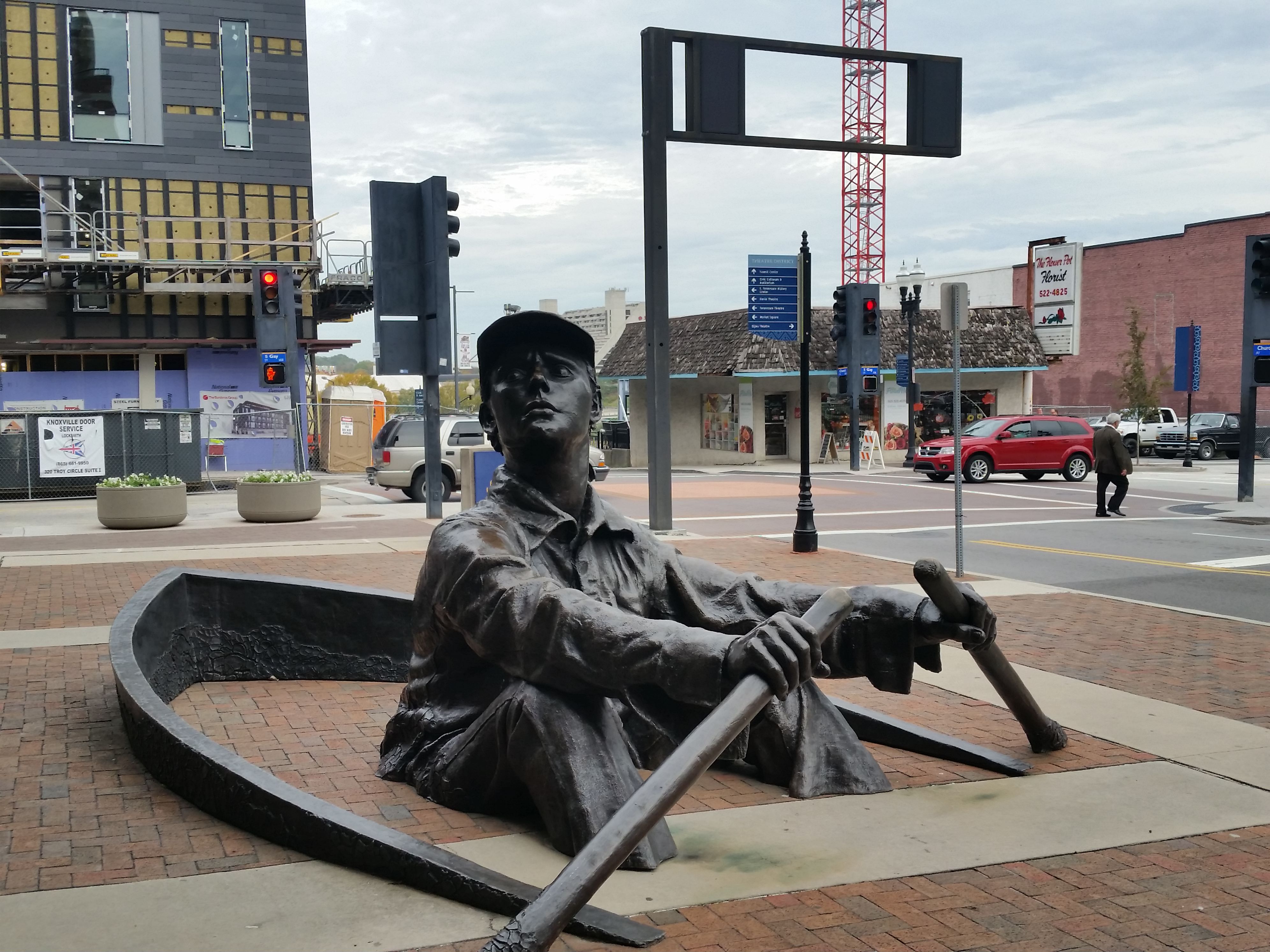 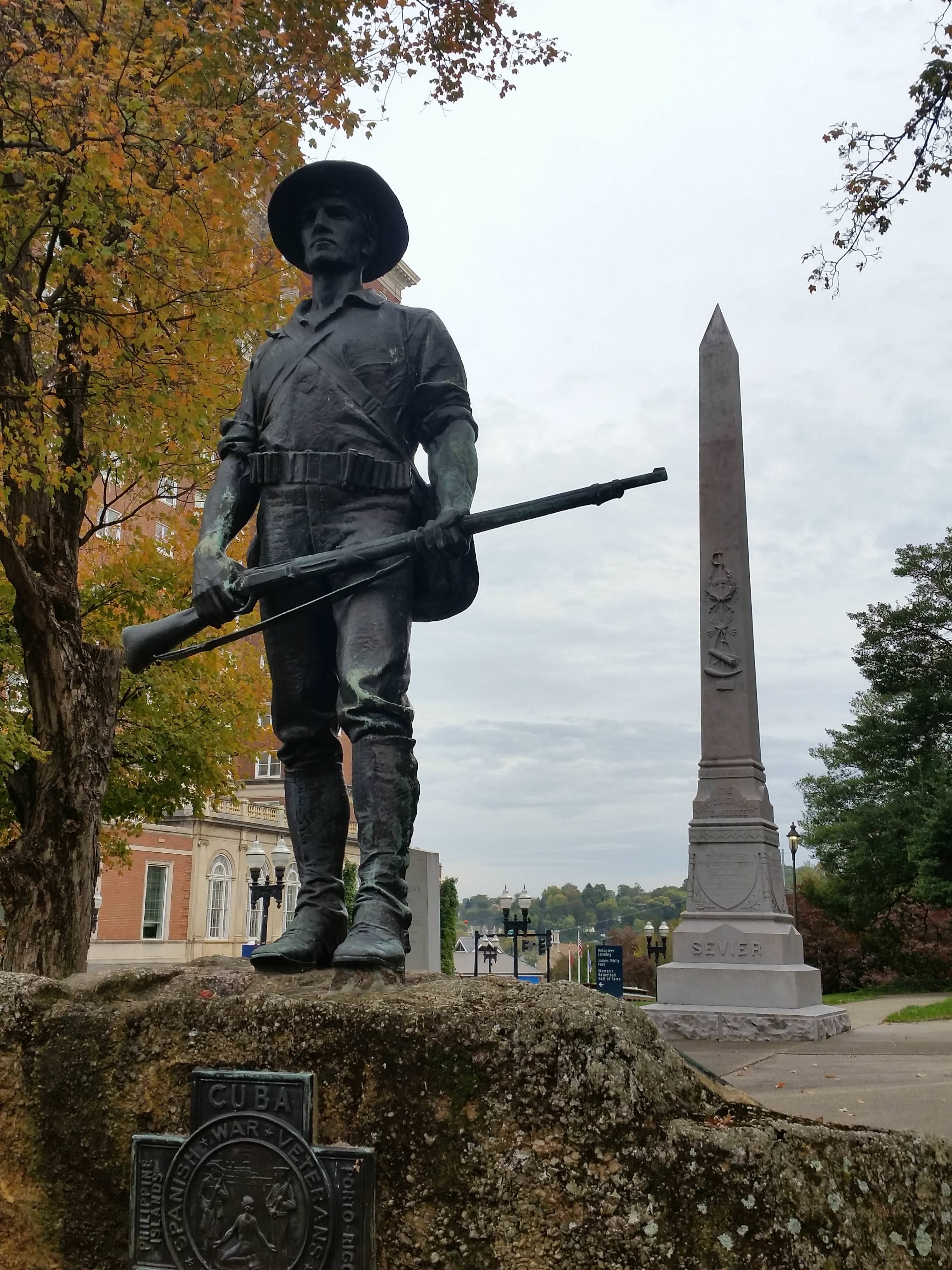 The Tennessee Theater actually had a filming of “The Price Is Right.” 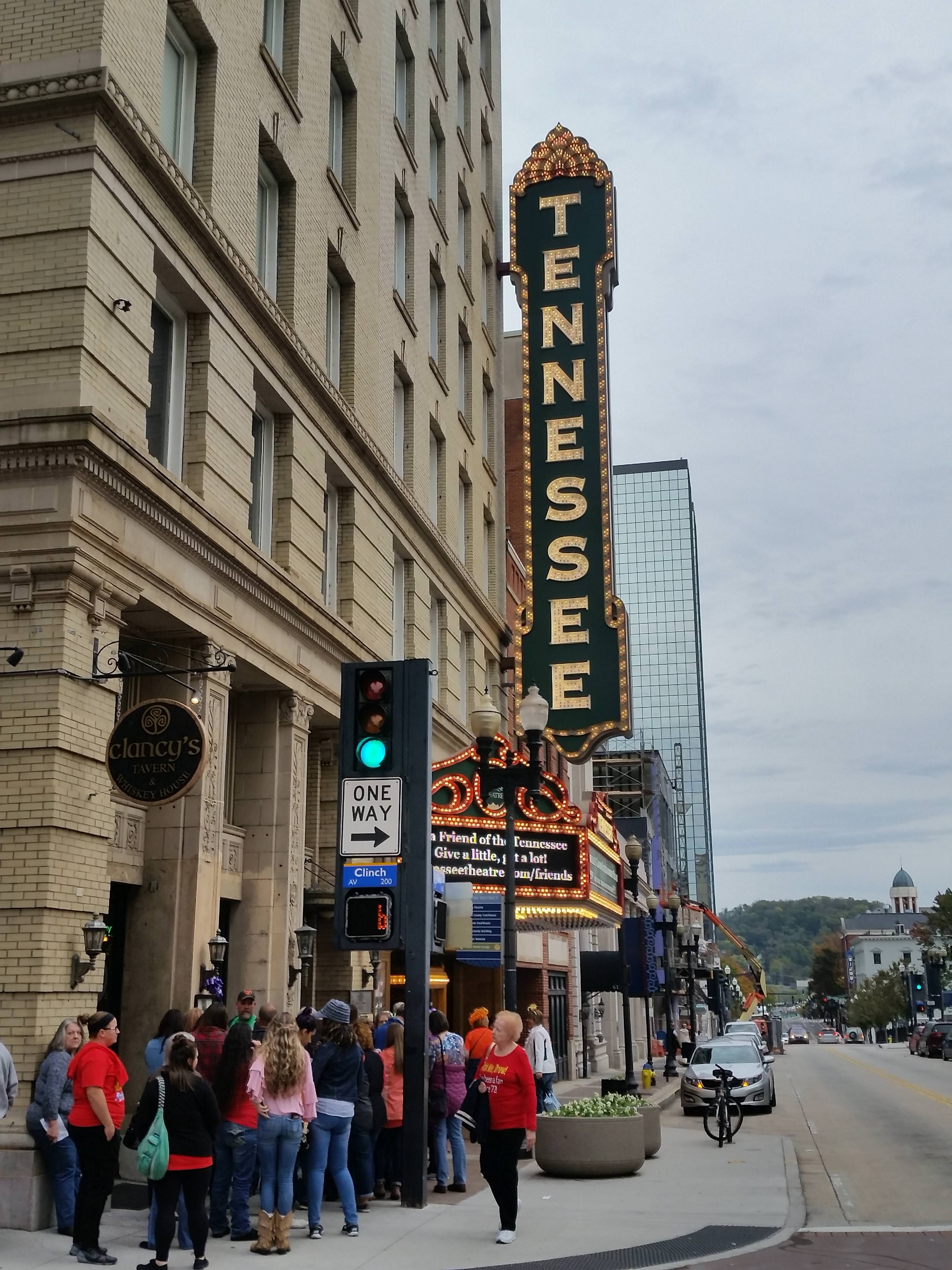 There was still a lot to see in Knoxville, but I was feeling pulled to move on. I was really looking forward to my experiences coming up the next day. I kind of felt bad not spending more time in the city, but I decided to use the remaining daylight to head towards the Smoky mountains.

Crossing off Knoxville, place number 44 of 92, actually meant that I had my first “line completion” of the trip. Verse 3 Line 1 is done! (Louisville, Nashville, Knoxville, Ombabika)

Though strangely enough, I have already crossed off the first place from all six lines of verse 4. 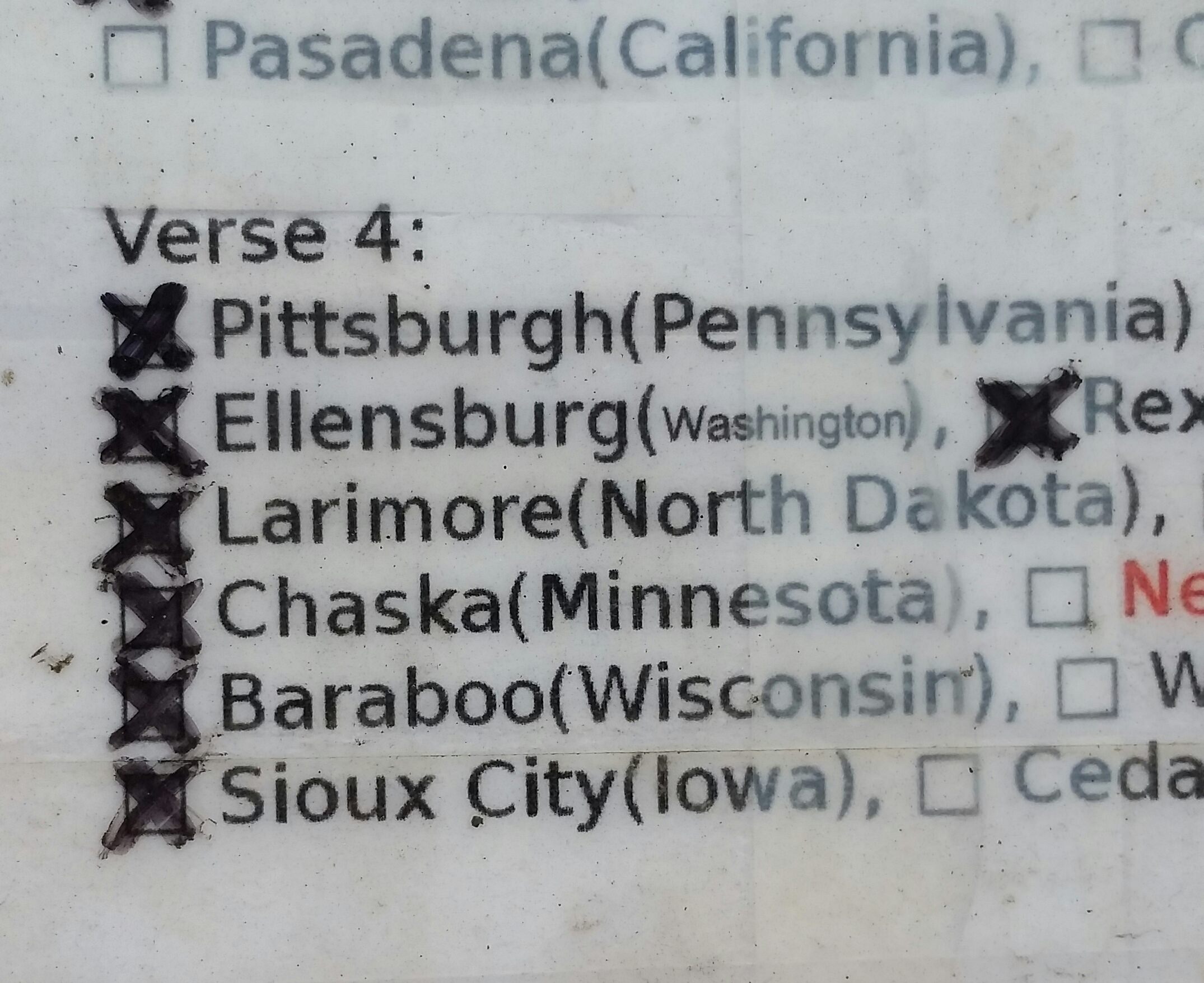 My labor for the day was not quite complete. I scouted for almost two hours before finding a suitable spot to put up my tent. It was just a little set of tracks along the Little Pigeon River. I had to do some “landscaping” to have sufficient space for my tent, but eventually made a big enough, flat enough area. It was nice having the creek to lull me to sleep.

43 and 44 of 92 are done! Up next will be my wonderful ride through the Smoky Mountains, including “The Tail of the Dragon” which is considered one of the best motorcycle roads in the world. Thanks for reading!

Realtime update: I’m tucked under some covers in a room in Jacksonville, FL at the Gabriel House on the Mayo Clinic campus. This one is kind of a long story, but a good one. Good friends of my parents, Todd and Lisa Evilsizor, are showing me some generosity. Tomorrow I’ll get Jacksonville and head down the coast to another host in Edgewater, FL. Then will come song places Tampa and Sarasota.