Annie is always the hero of this story. This post documents the best day on two wheels that I have ever had. We ride through the Smoky Mountains and take on The Tail of the Dragon.

It was over 50 degrees when I woke up. Hallelujah! I was going to have good weather for what would potentially be the best riding day of my life. The plan for the day was not to make any appreciable progress towards my next stop. Rather, it was all about enjoying the riding around the Smoky Mountains.

I skipped making my own coffee and stopped into a McDonald’s in Pigeon Forge as I waited for the sun to rise. When I was departing, I met a Baptist pastor in the parking lot. He inquired about my plans for the day, then asked if he could pray for my safety. I told him “no thanks,” that I felt I could manage on my own. (Yeah, right) It was a great way to start my day.

Hmmm…let’s see if I can post an approximate route of the day:

This is almost all of it. Google only allows 10 waypoints. 🙂 I camped down near Blairsville in Georgia

I continued into Gatlinburg, which is a gateway into the Greater Smoky Mountains National Park (GSMNP, henceforth). It was not mid-July and my throat wasn’t dry, so I didn’t go into a saloon looking for my Dad. Plus, Brett is a pretty good name.

My first scenic loop of the trip was the Cherokee Orchard Road. It is single lane with a 10-mph speed limit, but thankfully I was early enough in the day that there was very little traffic. A side quest of the day was to try to find a picture that best represented Tennessee (the state, in general, is mentioned in the song). This picture seemed like a good candidate. 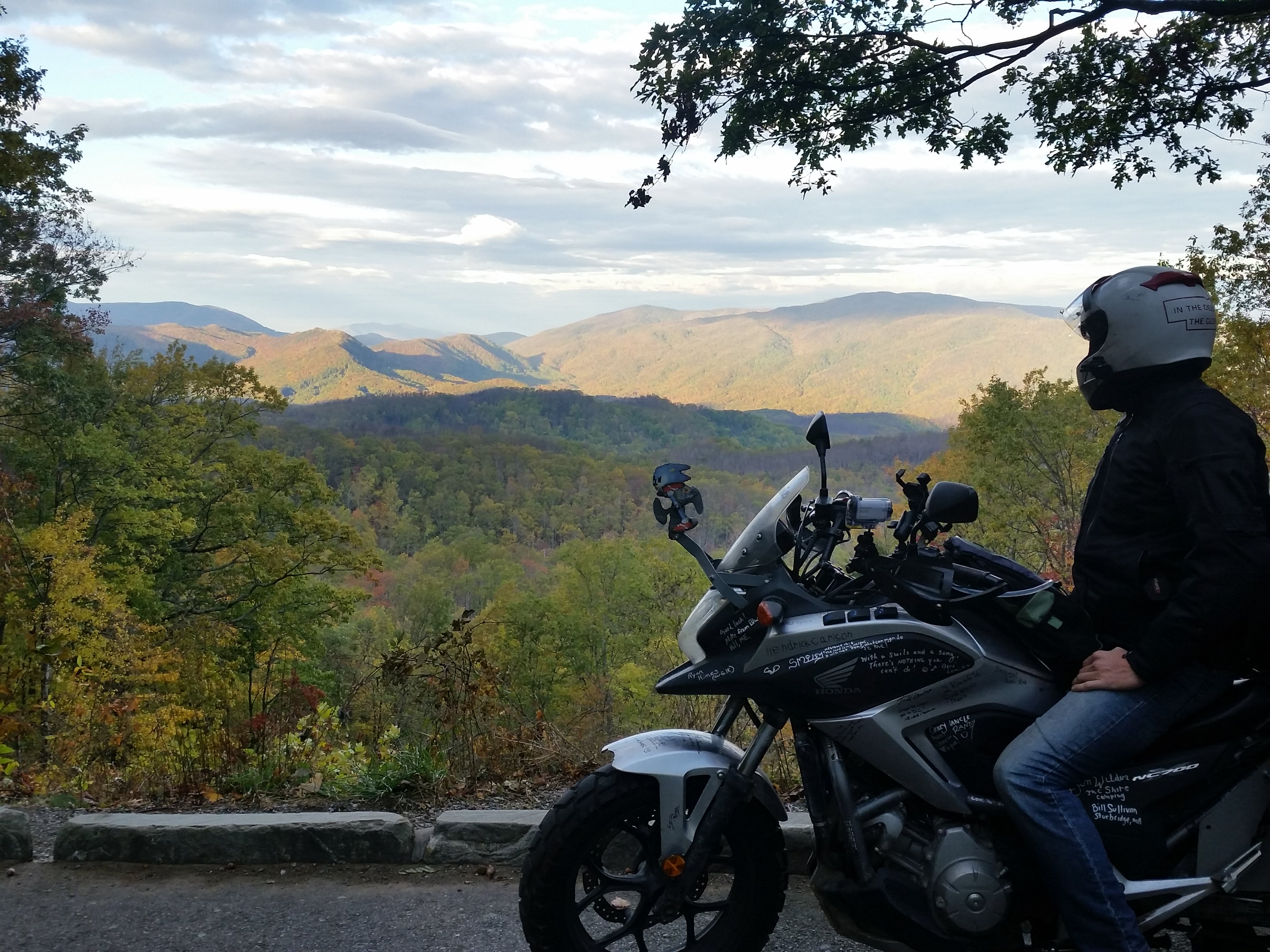 Riding in an autumn wonderland

The riding was not as good as I began to cross through the park. Despite being fairly early on a Thursday morning, the road was pretty well saturated with slow moving vehicles. The scenery was still impressive though. 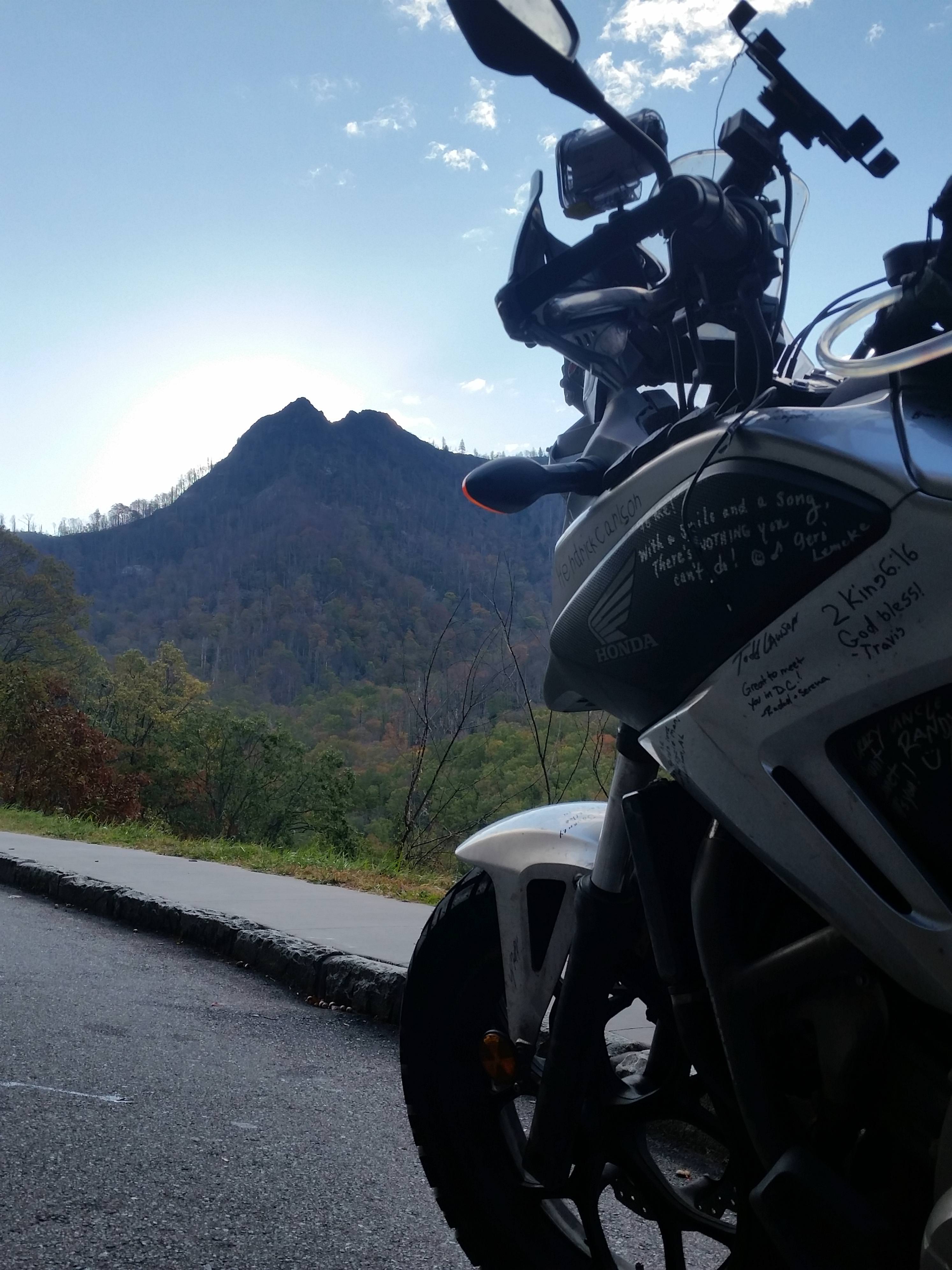 About halfway through the park, I crossed into North Carolina. I was greeted with this view: 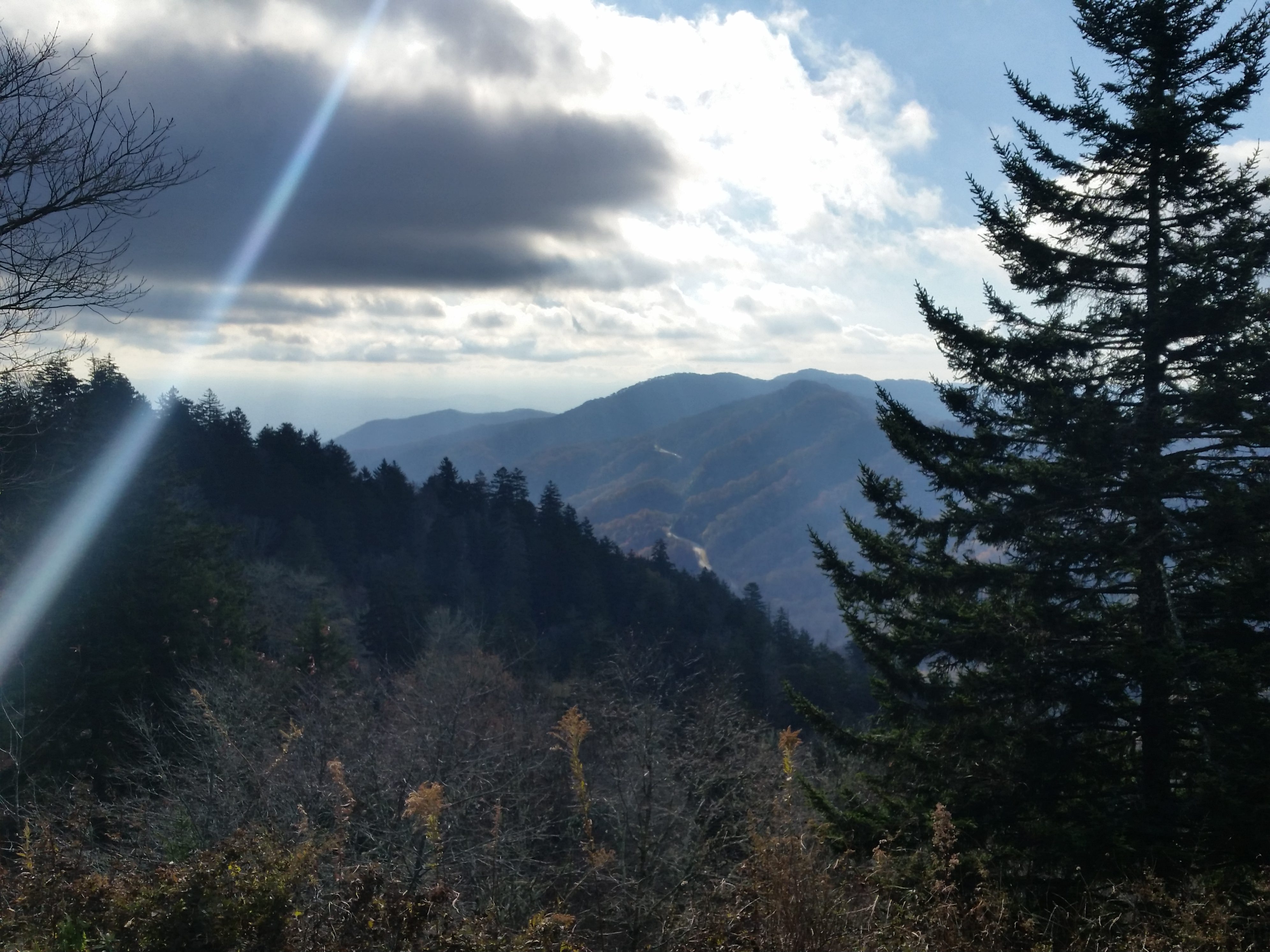 Before this trip even began, I had visited most of the states in the US. The only two I was missing that were east of Nebraska, were the two Carolinas. I would not be spending an ample amount of time in the Tar Heel State, but I would be experiencing some of its most scenic locales.

The traffic thinned out a bit as I took a detour to Clingman’s Dome, the highest point in Tennessee. The road runs right along the TN/NC border. I hiked to the top up a steep path, quickly realizing both the thinness of the air (6600 ft.) and the out-of-shapeness of the hiker. I don’t adjust to altitude very well.

Unfortunately, the observation tower was closed for repairs. 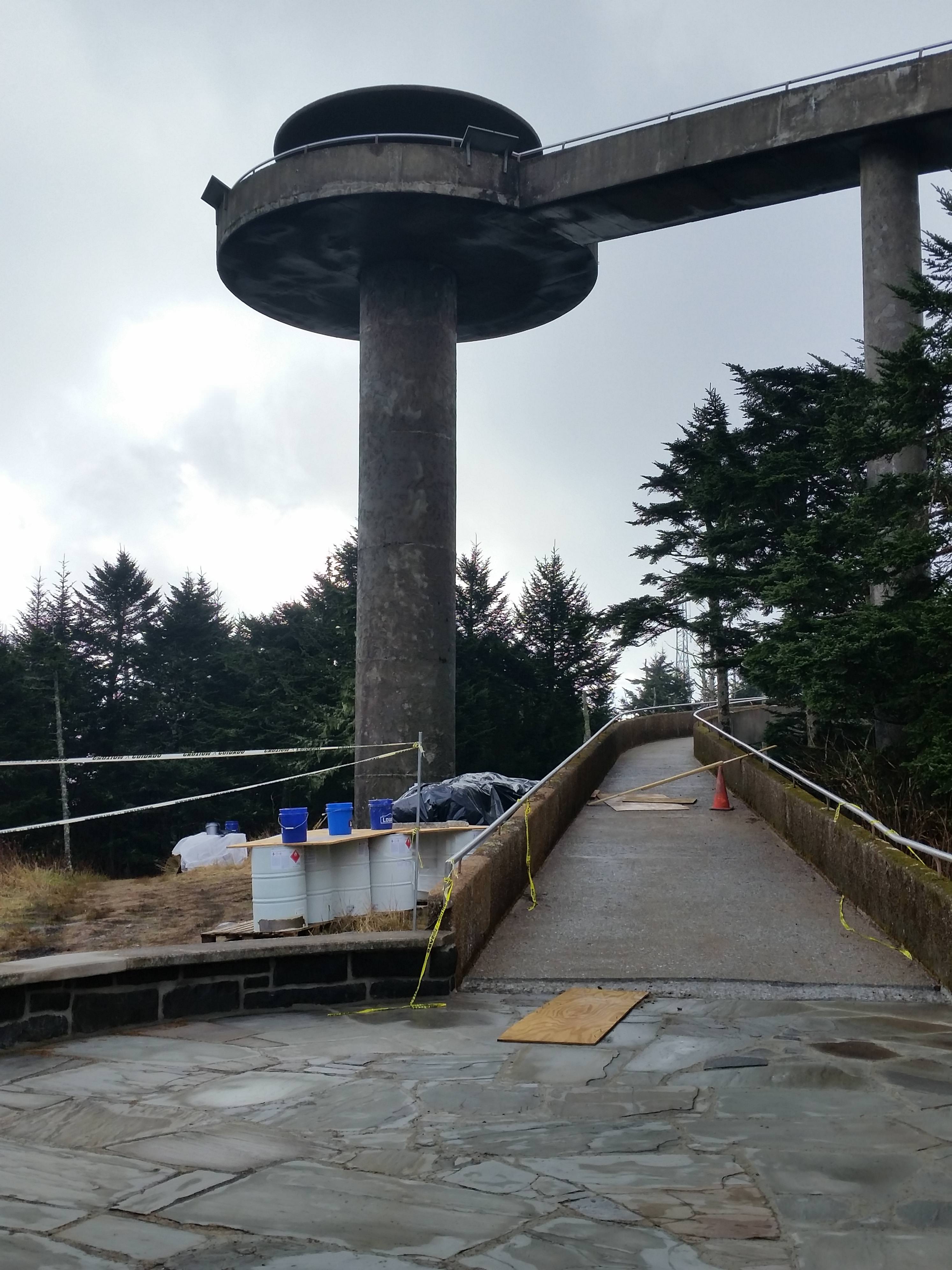 The Appalachian Trail, a 2,200 mile hiking path along the crest of the mountain range (….next trip?), crosses up here. I hiked on it for a bit. 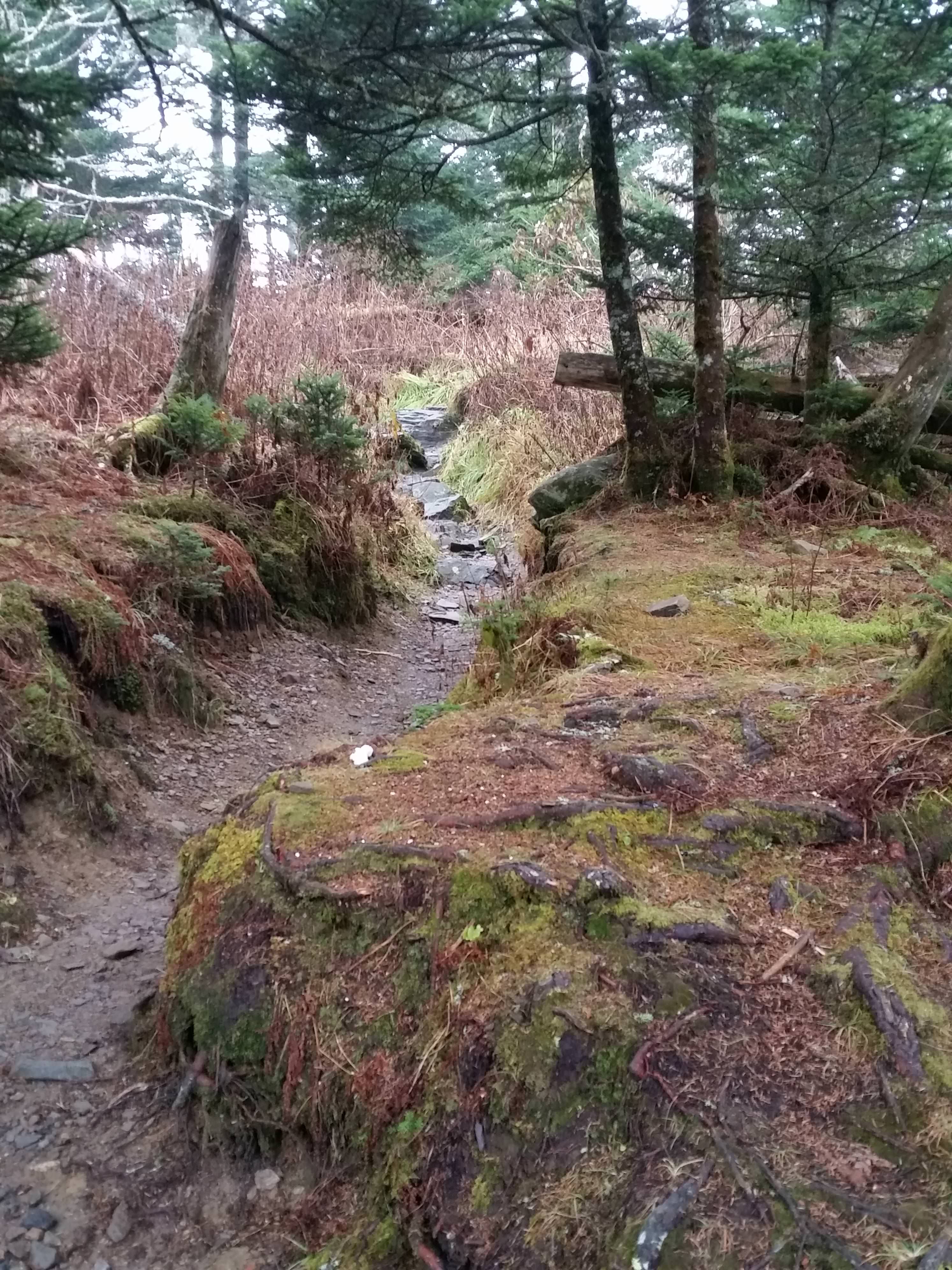 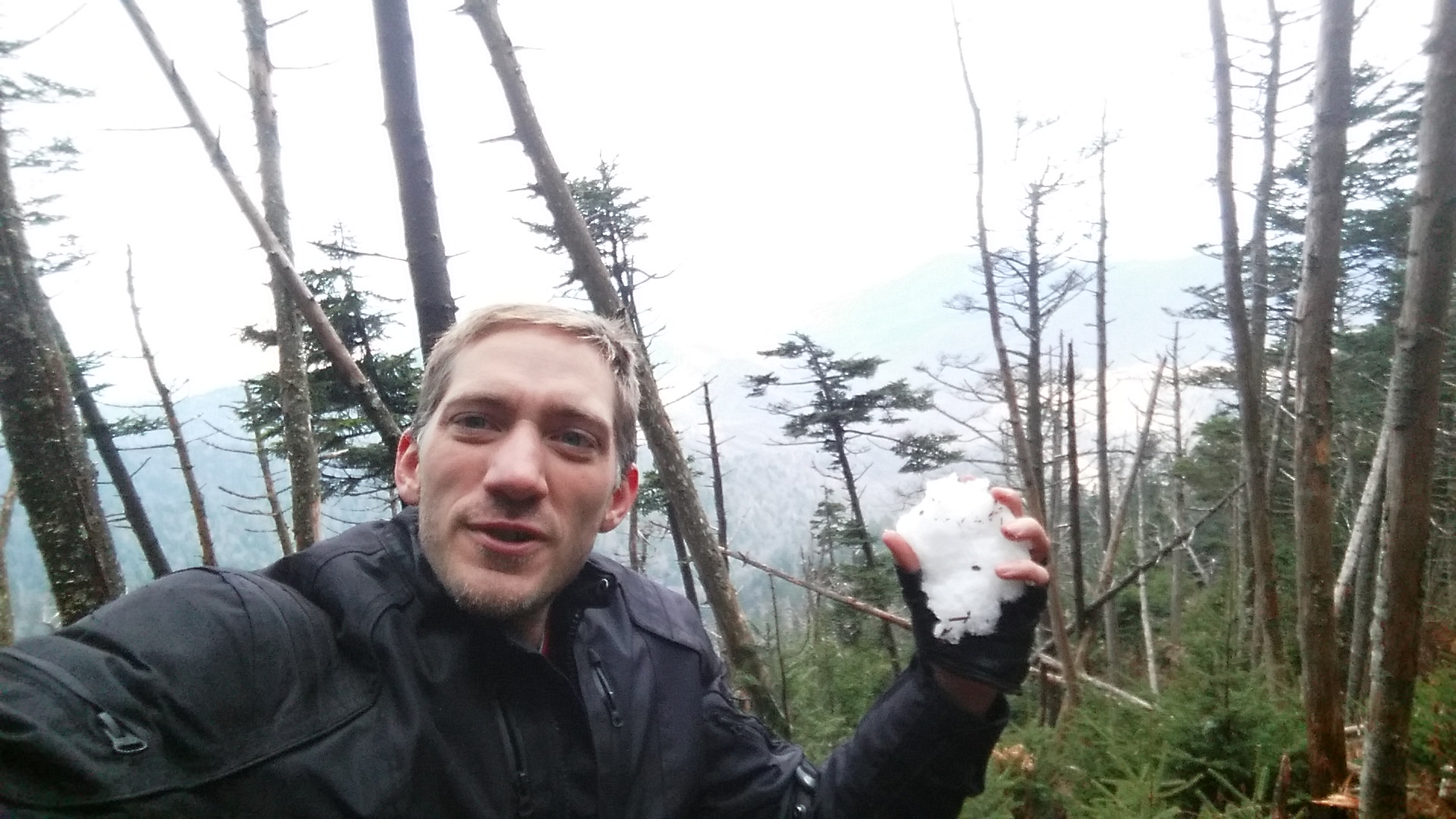 The scenery continued to impress as I came down the mountain and out of the park, into Cherokee, NC. I gassed up and took some extra time giving Annie a thorough inspection and adjusting a few things. My next destination was one of the most famous Motorcycle Roads in the US: The Tail of the Dragon.

The Dragon boasts an astounding 318 curves in 11 miles. This perhaps eclipses the total amount of curves found in my home state. It is also known as being a dangerous road, claiming the lives of numerous bikers each year. In fact, there is a complete map posted where you can see the location of each of the deaths: Link here (Mom and Dad, don’t click on it)

After another scenic ride, I arrived at the gateway to Deal’s Gap. Time for Annie to slay the Dragon! 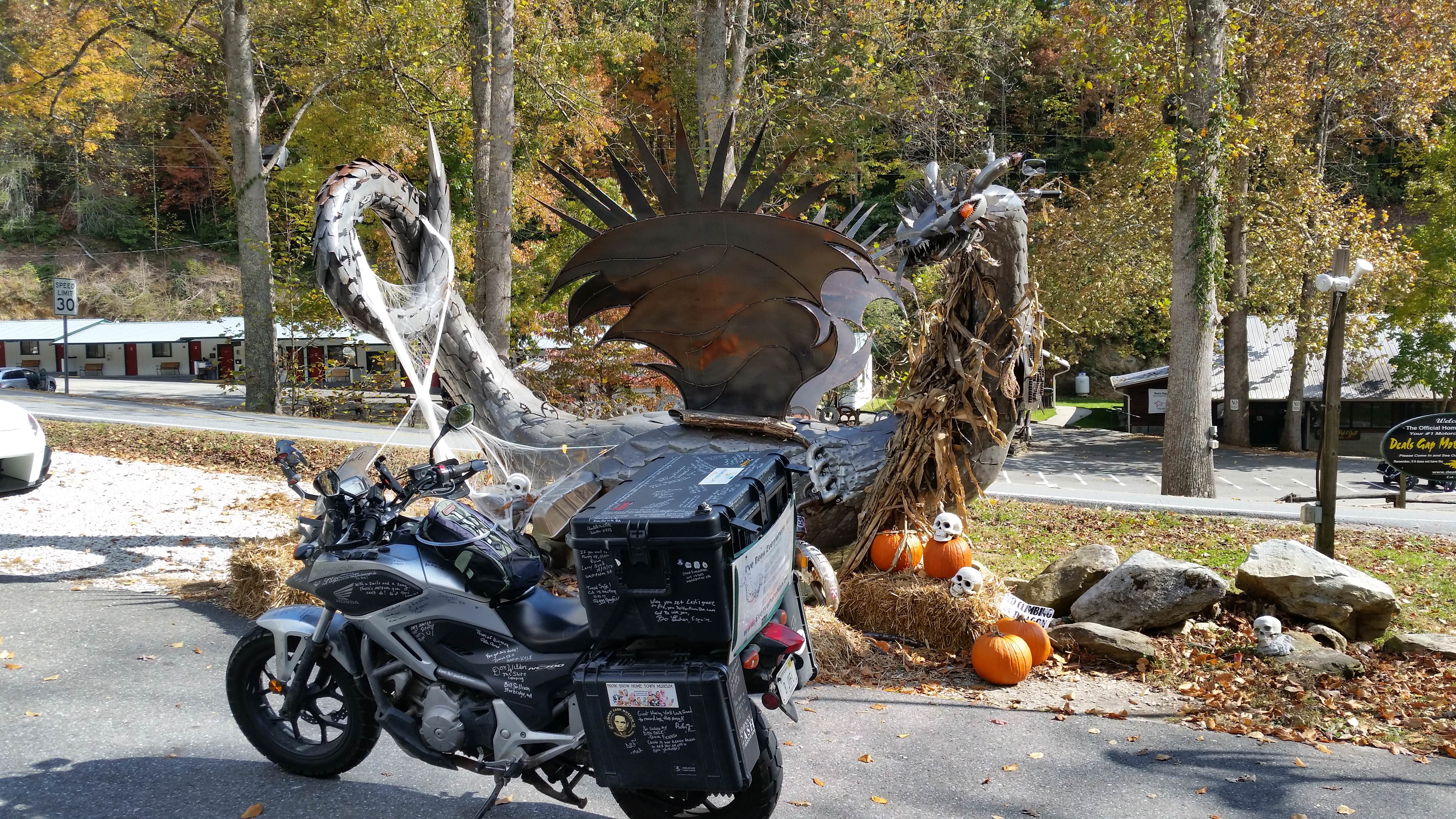 I took it pretty easy on my first run, stopping often for pictures. 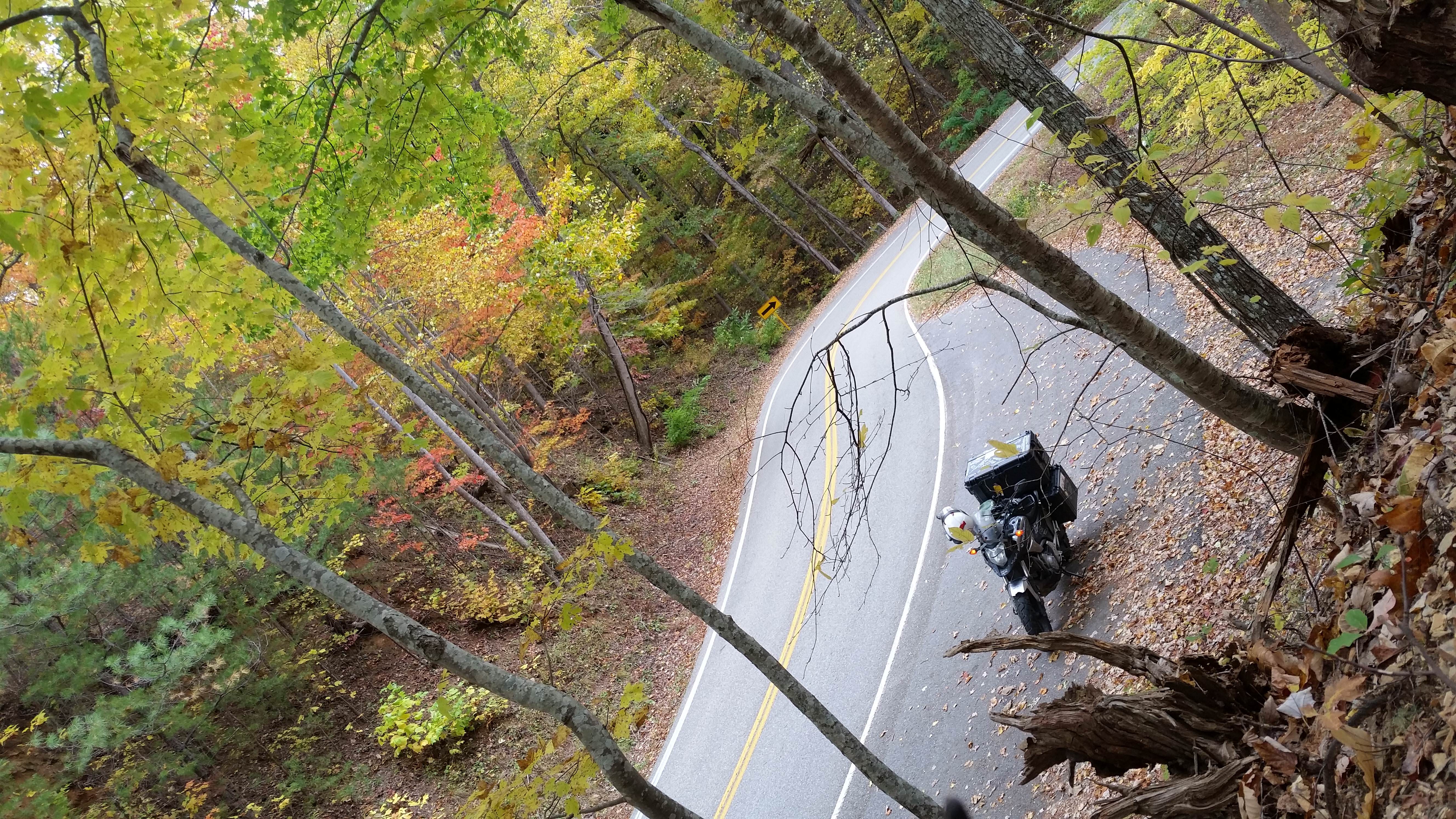 I put my camera in “girlfriend mode” for awhile.

In the clip above, you can see one of the photographer’s tents. There are numerous people set up on the curves that take photos of all the riders and post them online for purchasing. Though one of them missed the chance for the perfect photo, I decided to purchase this one. It just looks so ridiculous, I could not pass it up. 🙂 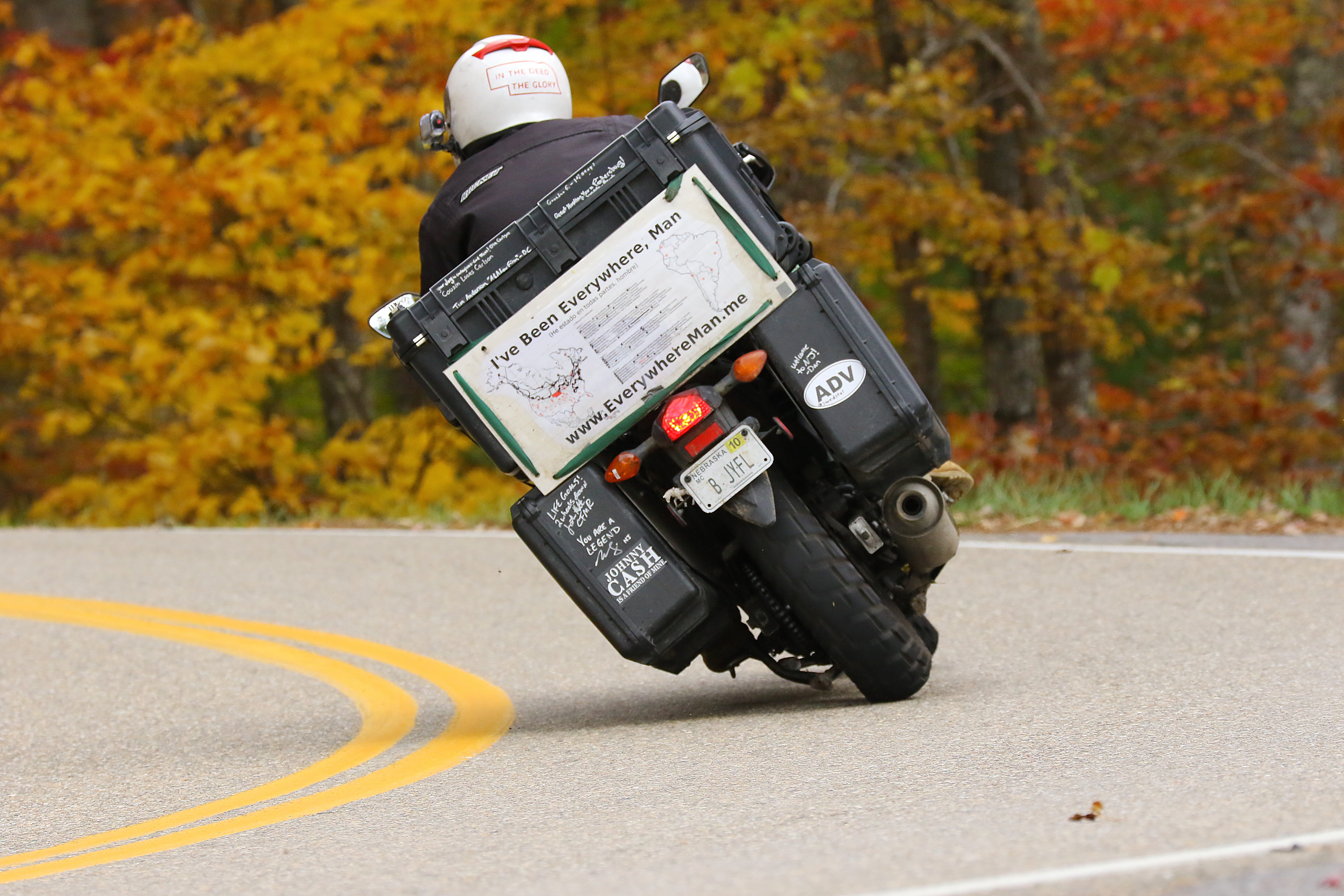 The road isn’t particularly scenic, save for an overlook of the Calderwood Dam 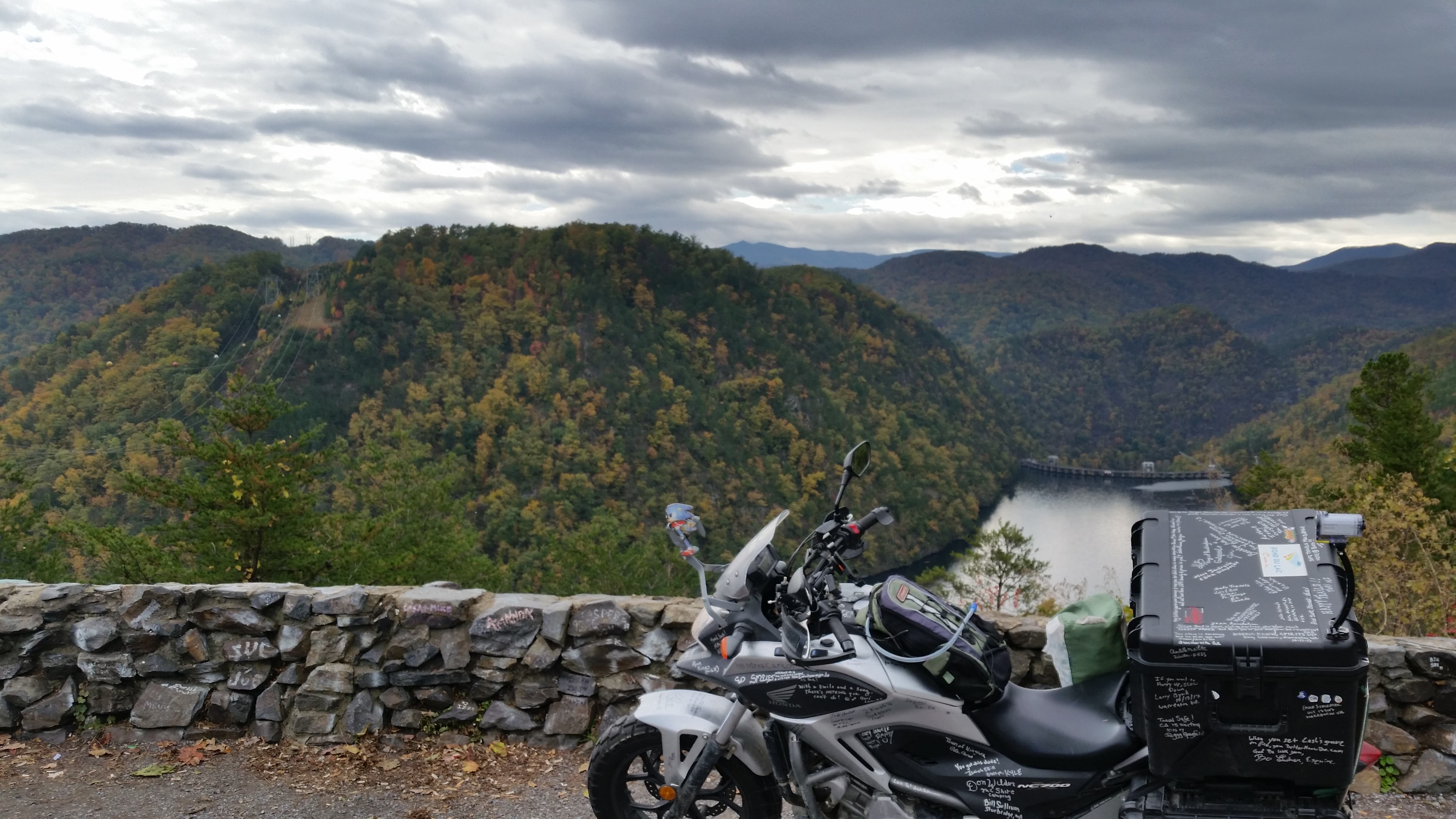 It was here that I met my new friend, Walter, who was riding a small, agile KTM. He used to live in Nashville, but moved to east Tennessee primarily to be closer to this road (and you think you are a serious rider?). He said that I was really fortunate to be riding the road on such a perfect day. Indeed the temperature, fall colors and sparseness of traffic were ideal. Walter said that in the summer, riding the road is like being in a Shriner’s parade, “and not the good kind.”

I reached the end of the road and ate a can of beans before attempting the Dragon again.

Before posting this video, I should maybe add a bit of a disclaimer. I rode quite aggressively during this run. I am very cautious when it comes to things out of my control, namely other drivers. Things like splitting lanes gives me pause, since I am putting my safety in the hands of others. However, when I have an open road and am reliant solely on my own skills for staying safe, I will ride much more freely.

I believe that riding a motorcycle can be done in a way that does not comprise safety for the experience. Taking aggressive lines can be done wisely. If you watch where I am looking before entering a switchback turn, you will see me scout for oncoming traffic. The presence of other vehicles totally changes how I approach a curve.

….basically, just don’t be dumb because I am. 🙂

1:58 – I was extremely fortunate to only have to make one pass on this whole run. This was an illegal pass, but I had plenty of room.

6:15 – I wave at my new friend, Walter, who was sitting with one of the photographers.

6:44 – I think this is the location of the photo posted above.

7:41 – At this second, a photographer missed the perfect shot. The engine for the NC700X is so quiet that he didn’t hear me coming. At this moment, my right footpeg scraped along the ground. The photographer jumped and started shooting. 🙂

12:05 – The biggest mistake of the run, taking too much speed into a turn. I was not at risk, since I had already looked ahead for oncoming traffic. You can see me shaking my head after the mistake. 🙂

It was a good run! Especially considering the amount of weight that I am carrying and the fact that I don’t have dedicated street tires on Annie, I think my time was respectable. All told, I think I had 6 peg scrapes and only hit 60mph 3 times. I had a blast!

I parked near the “Tree of Shame,” a monument of broken motorcycle parts commemorating poor decisions. Thankfully, I had nothing to contribute. 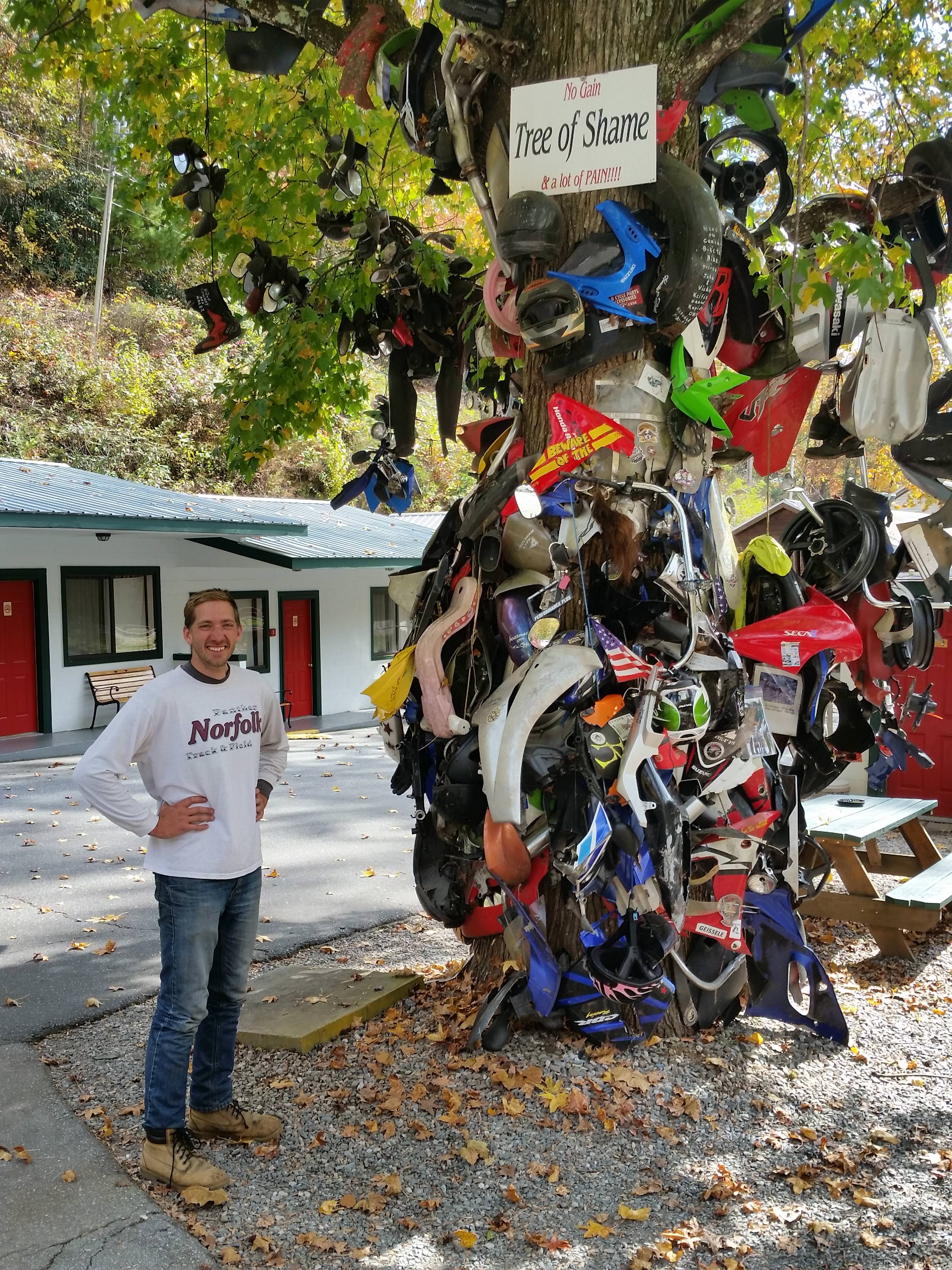 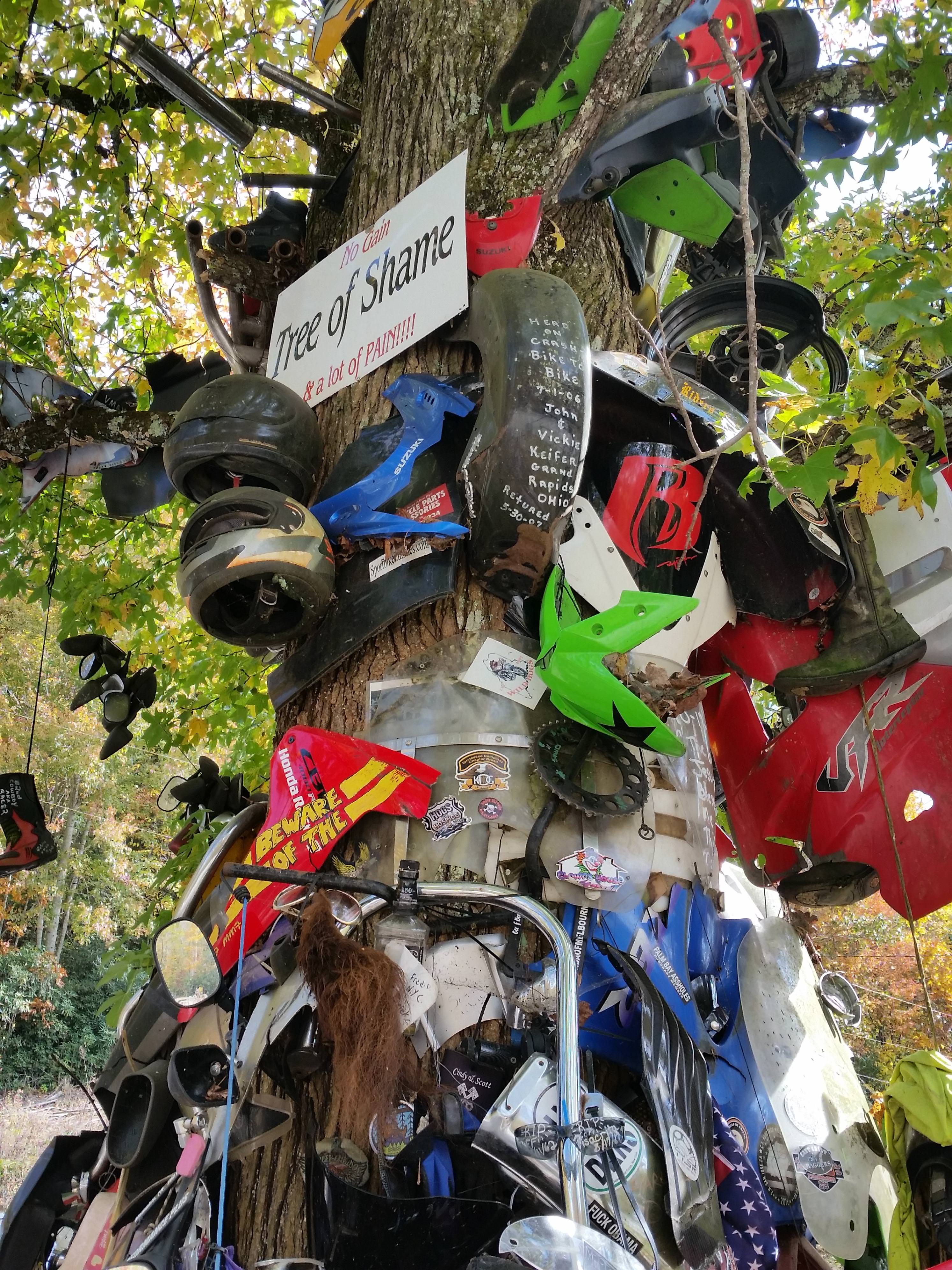 I ran into Walter one more time as I was pulling away. He said that he and the photographer had looked up my website after I sped passed.

“I told him you was riding it like you meant it.” he said. This is high praise coming from a local. 🙂

I continued on to my next wonderful ride, the Cherohala Skyway. This road runs through the mountains at high elevation. It is possibly even more dangerous than the Tail of the Dragon, given that there are some straight stretches allowing one to gain plenty of speed. These are interspersed with sharp, 15-mph, curves.

I pulled off to take a break…..and then I saw it: My Tennessee picture. It may include some North Carolina in the distance, but I don’t think I can do any better than this: 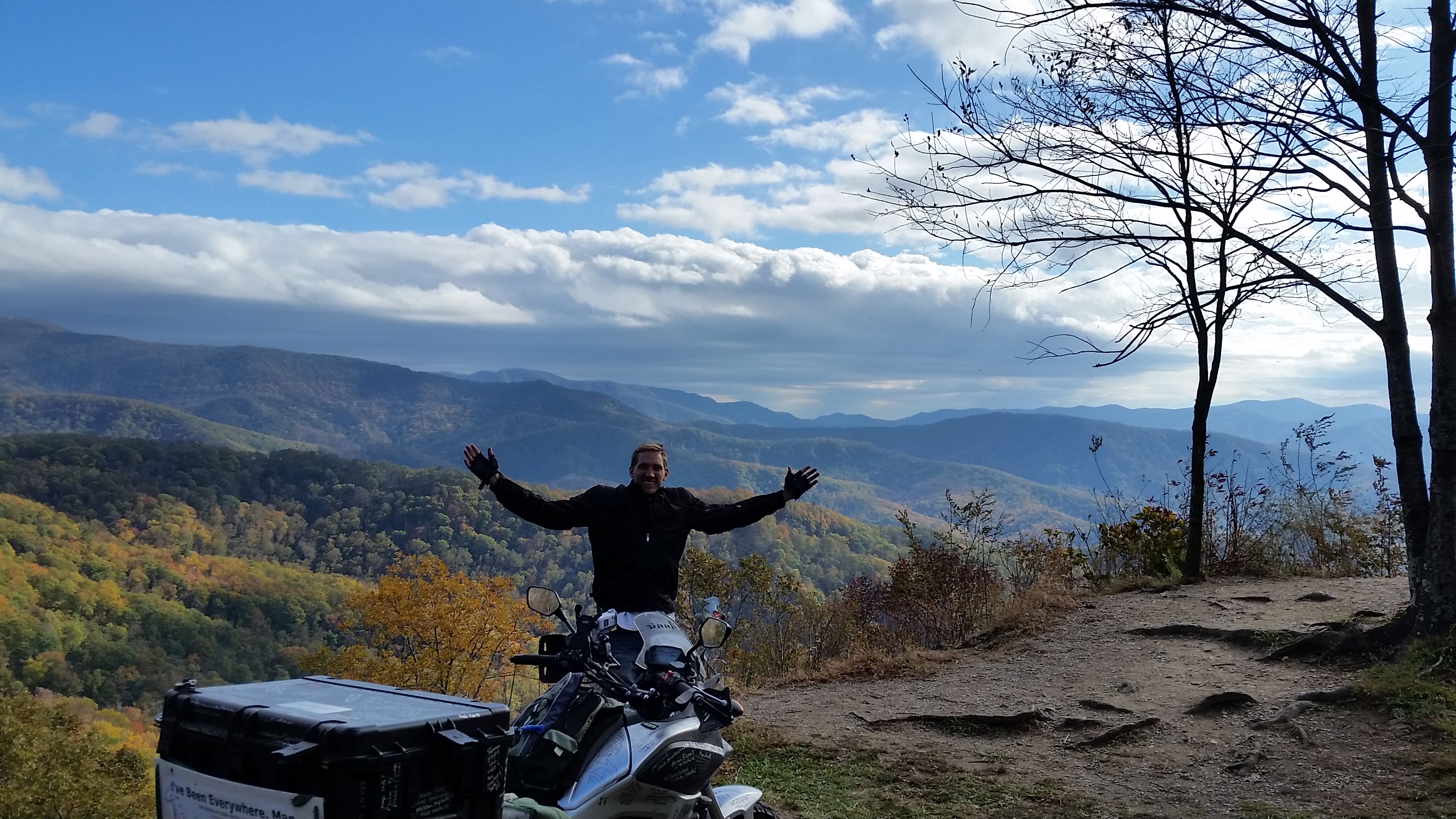 After leaving the Skyway, I saw something that is always worth stopping for: A Honda Dream. 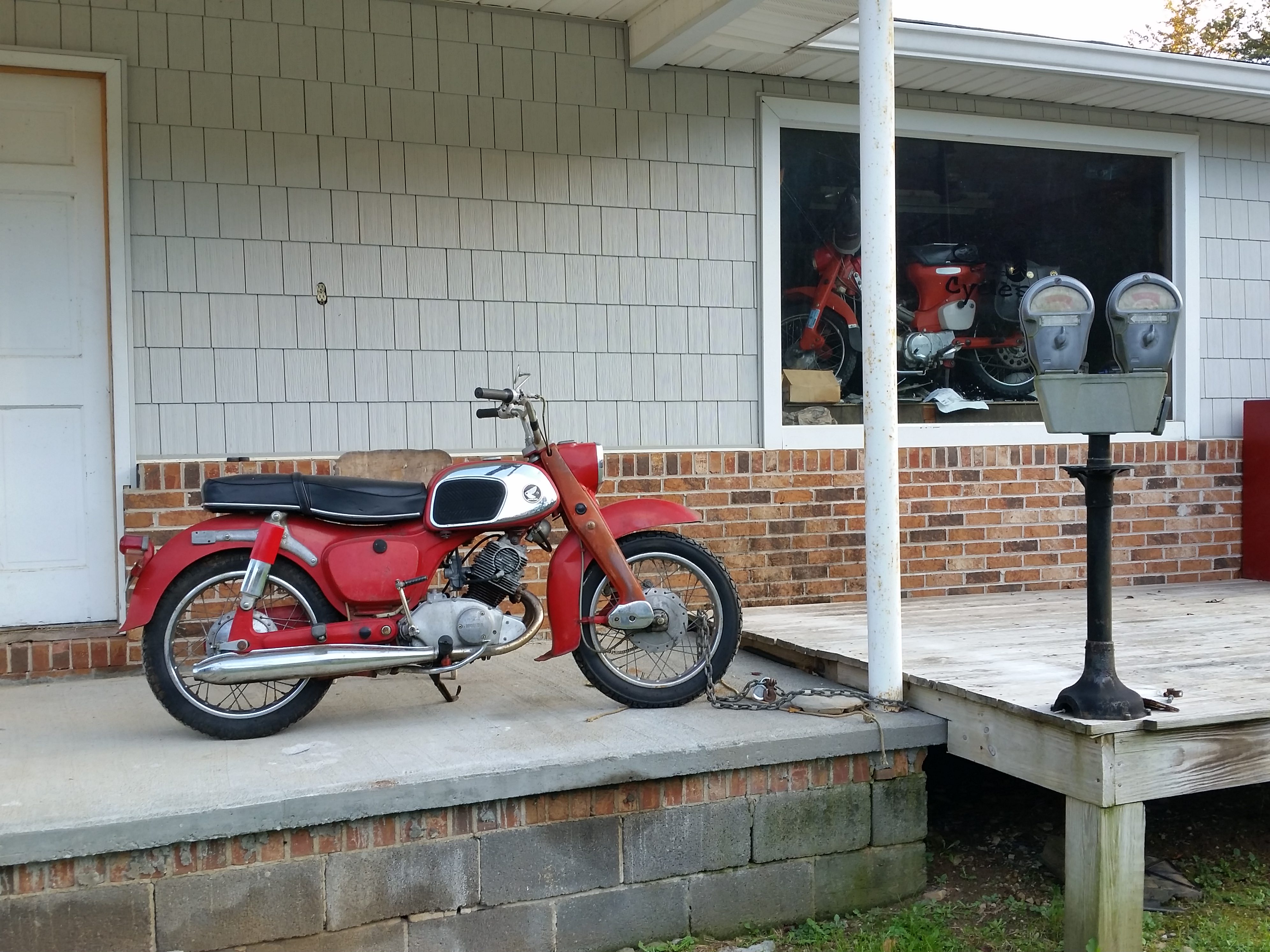 I stopped for some supplies in Tellico, finally feeling the effects of a long day in the saddle. I used my remaining daylight to cross into Georgia, finding a free campsite along the Wolf Creek near Blairsville. There, I took this great photo: 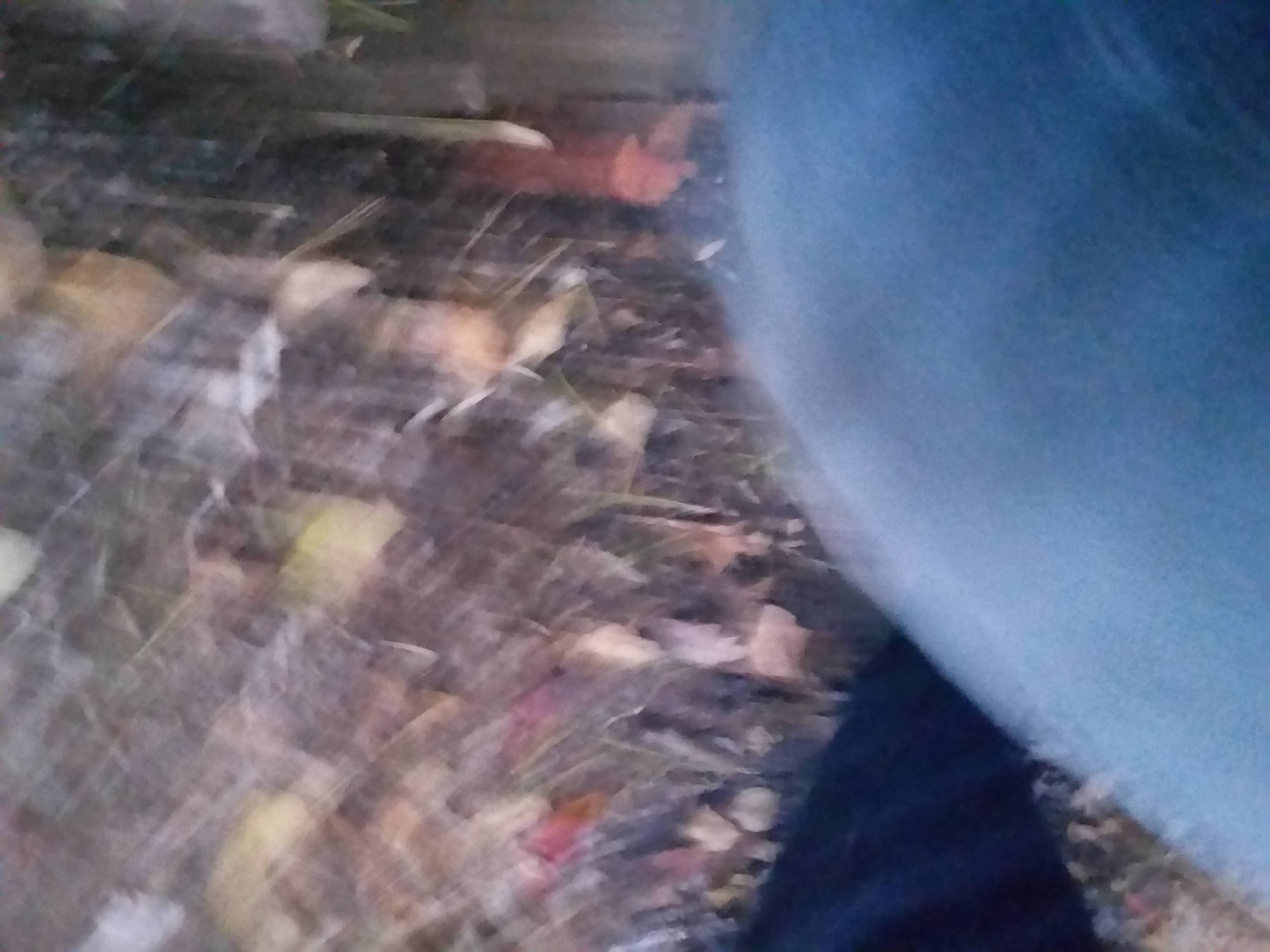 As I was framing up the shot, I noticed Annie beginning to lilt to the left. Her kickstand was sinking into the soft ground. I rushed over to try to catch her, snapping the above photo in the process. Unfortunately I was too late, but there were no ill effects from the fall. I got her righted and set up camp. 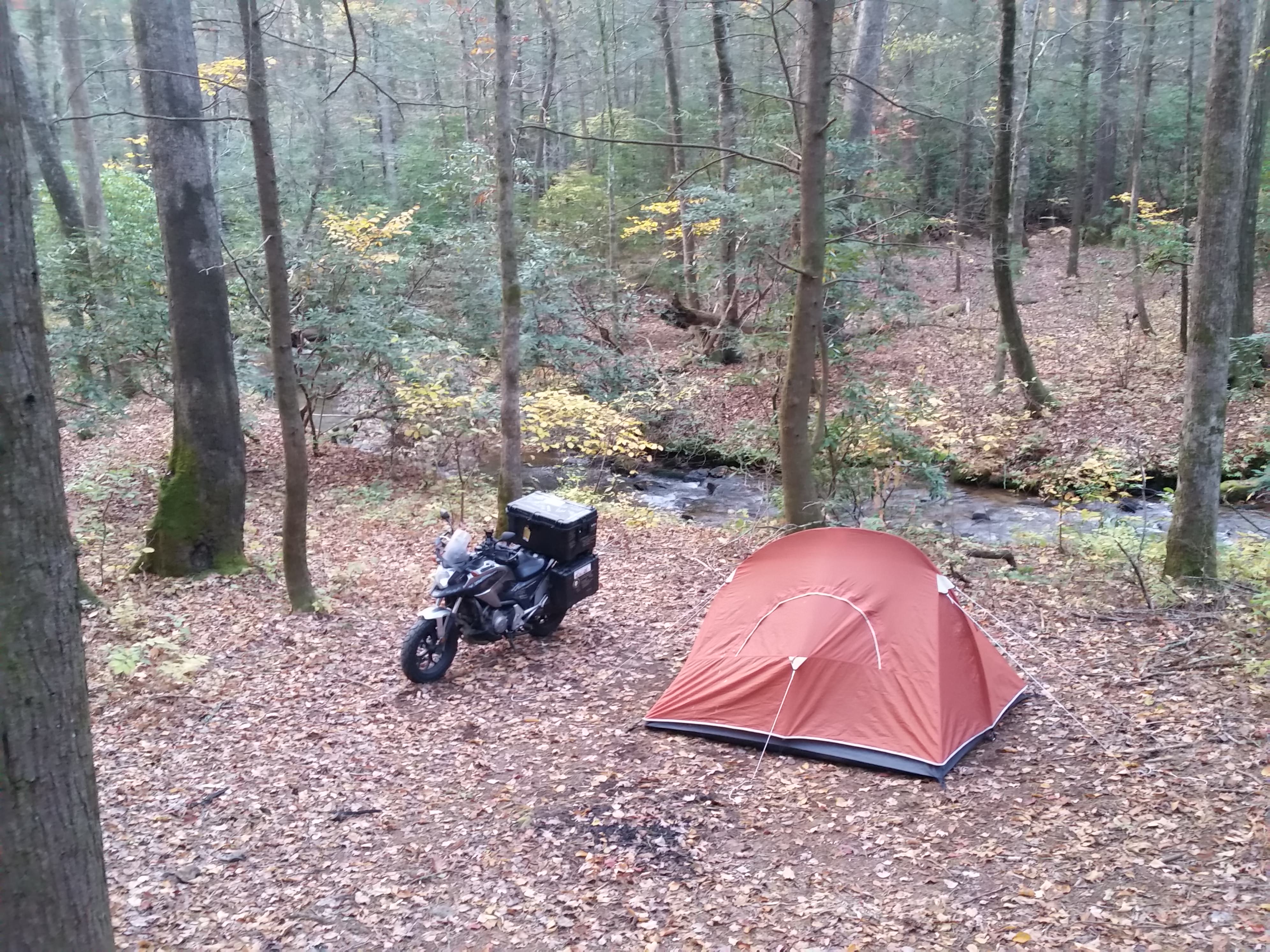 It was a great spot to doze, having a creek gently singing me to sleep.

What a day! I can’t recommend this area enough, as far as riding goes. It really is a must do. I can’t wait for my next tangle with The Dragon.

Realtime update: Jacksonville is done. I’m hanging out with Linda and Wayne, friends of my parents (and now me), in Edgewater, FL. I’ll head over to the Tampa area today and take on Tampa and Sarasota tomorrow. It’s nice to be warm!

15 thoughts on “Slaying a Dragon”