Let’s see a submarine in South Carolina, try to catch a sunrise, not eat a little fish and let Annie take a little break.

For your listening pleasure, my favorite song by Charleston natives, Hootie and the Blowfish:

A rather uninspiring day, which is always a relief. I shouldn’t have to type too many words about it. 🙂

My morning began with some beautiful riding in the Chattahoochee National Forest. I stumbled on a wonderful road with some great twists.

I think this was it:

I made my way into South Carolina and stopped at the library in Simpsonville. The majority of my day was spent here. I took a break to do a phone interview with Crystal, a writer for the Lafollette Press (the newspaper for the Jellico, TN area).

Realtime update: The article is out and it is wonderful! Here is the link. Thank you so much Crystal!

As evening approached, I made my way to a camping site near Peak, SC. It is a place where the Palmetto Trail (a hiking path across SC) crosses the Broad river. They had a little spot for tents which would suit me nicely.

I was famished, having hardly eaten all day, so I began to make some noodles. Unfortunately, I realized that I did not have enough fresh water. I hiked down in the dark to the river and brought back a pot-full. Upon first glance, the water looked really clean. Then I saw it: 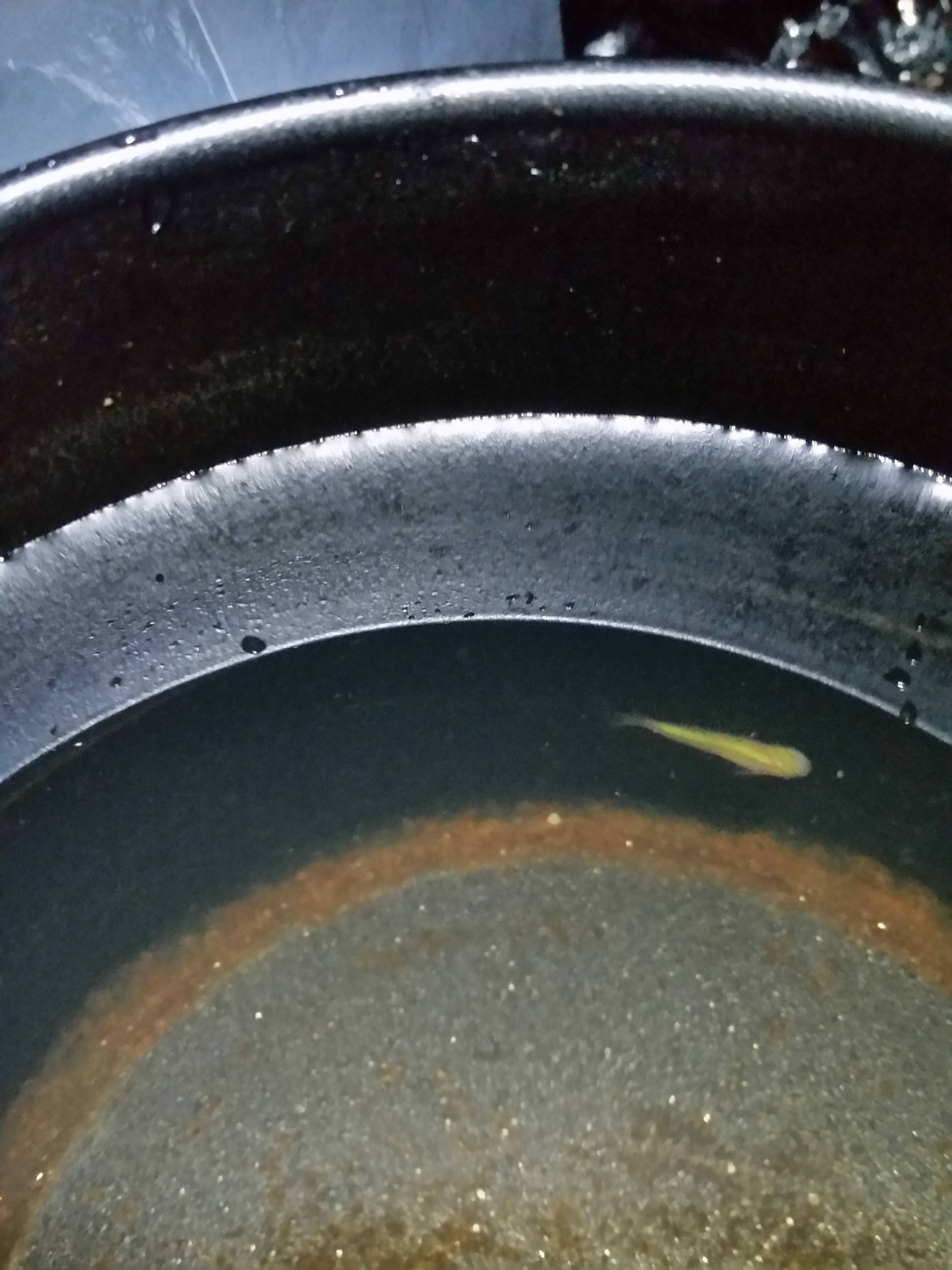 I don’t know exactly where it hit me, but the change was sudden. As I made my way towards Charleston, I felt it: The South. I’d technically been in the South for some time now, but I had yet to feel like it. Finally, mercifully a dense humidity and pleasant warmth began to envelop me.

For months I had been wearing multiple layers on the top and bottom. Now I found myself doing an awkward disrobing in the Summerville Public Library bathroom. There’s really no smooth way to remove long underwear.

I was fortunate enough to have a host in Charleston. A gentleman named Eric had contacted me through ADVrider, offering me a place to stay.

I began my time in Charleston by heading downtown. There is a nice area along the water, featuring the iconic “Pineapple Fountain.” 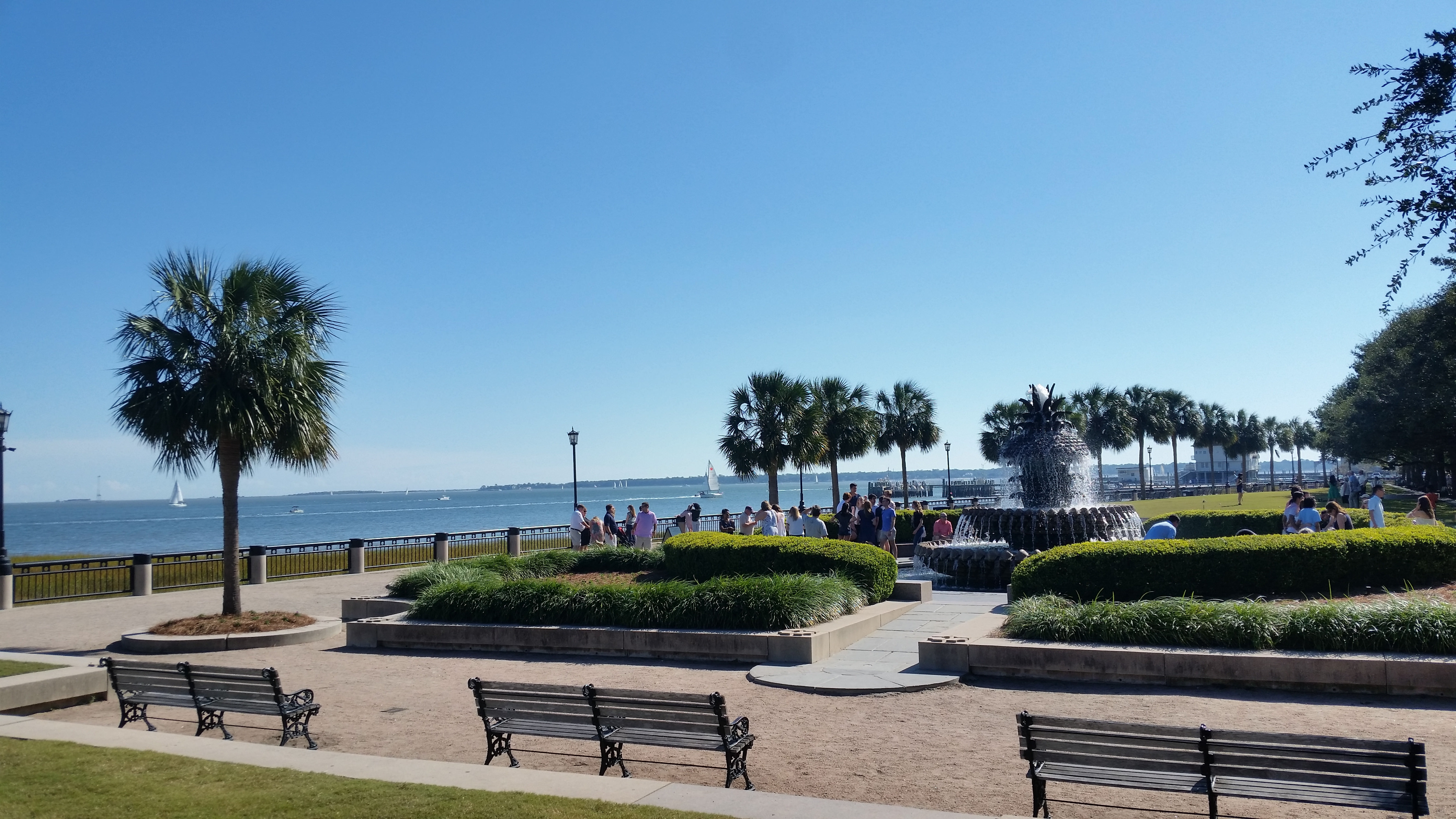 There were lots of people around, but I really liked the view. I thought about bringing Annie to this spot at sunrise, since the sun would come up over the water behind the fountain. What could go wrong?

Eric had informed me of a festival taking place, which included a car show. I decided to check out some other sites first. Once Eric texted me a picture of a beautiful AMC Pacer, I knew I would have to get down there at some point. 🙂

One thing I knew I wanted to see was the H.L. Hunley, the first submarine to sink an enemy ship. It appeared that the museum was closed, but I decided to go there anyway. The majority of the day, the museum was only open to members (supporters). However, I arrived about 15 minutes before their first public tour of the day. Perfect.

My brother has long been interested in this piece of history, which is how I acquired knowledge of it. I can’t tell its whole story here, but I’ll offer a brief summary:

The sub was built in 1863 by Confederate forces looking for creative solutions to combat the Union’s naval blockade. The Hunley proved deadly right away, but only to its crew members. It sank twice in the harbor during testing, claiming the lives of 13.

On February 17th, 1864 it successfully attacked the USS Housatonic, using a bomb mounted to its bow with a long wooden spar. Reports vary about what happened to the Hunley following the attack, but it was never heard from again.

After being hidden for more than a century, the Hunley was found in 1995 and raised in 2000. It was actually found further out to see from where it was last seen. No team had thought to search there previously.

Since that time, researchers and scientists have been working to preserve and restore the vessel. It still sits in a sodium hydroxide bath.

The tour was wonderful and informative. The highlight, of course, is getting to see the ship itself. 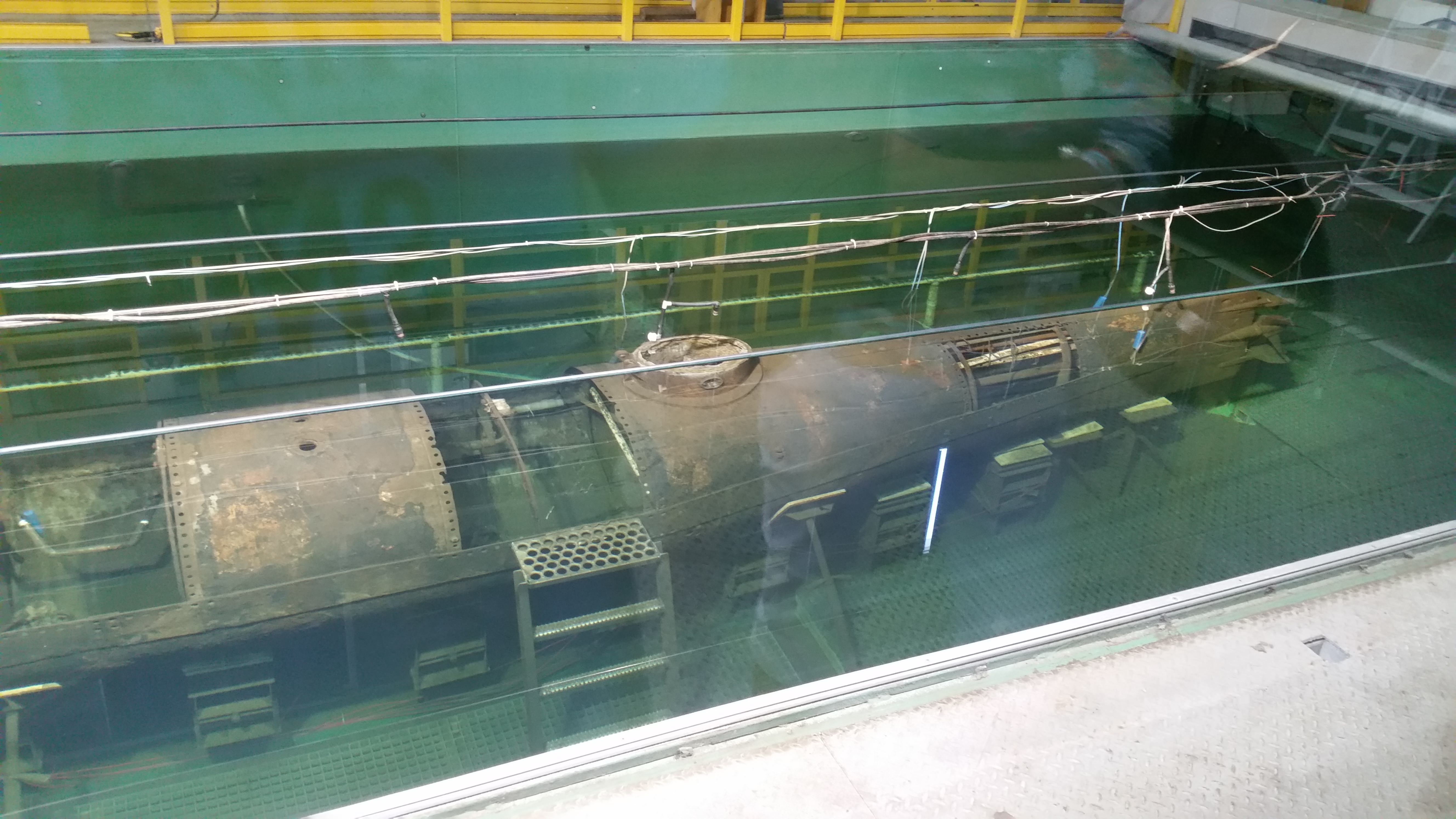 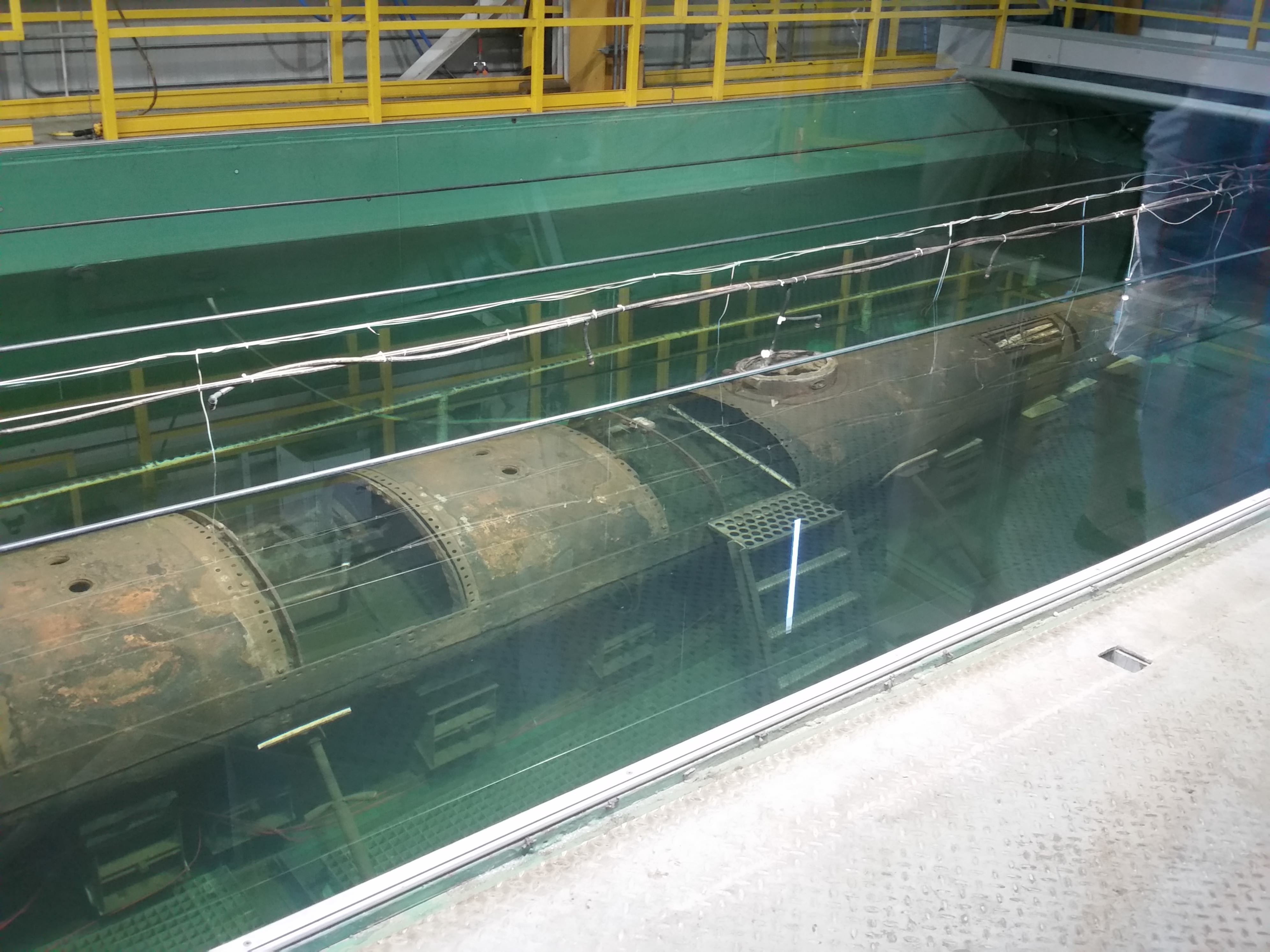 The hope is that after a few more years of restoration work, the sub will be able to stand the open air and be moved to a “proper museum.” It is already a spectacle to see, so it will be very interesting to see what the future holds.

There is still lots of mystery surrounding why the Hunley sank. Many theories exist. One of my favorite things about visiting was asking each of the employees and volunteers what theory they ascribe to. From the gift-shop worker to the tour guide to the security guy to the lady at the cash register, they all had slightly different opinions. Part of me hopes that the question remains unanswered. The speculation is half of the fun. 🙂

As I walked into the lobby, I saw a guy with a helmet and riding jacket. It turns out that it was my host, Eric. We chatted briefly and I got to meet his motorcycle. He took my picture in front of the museum. 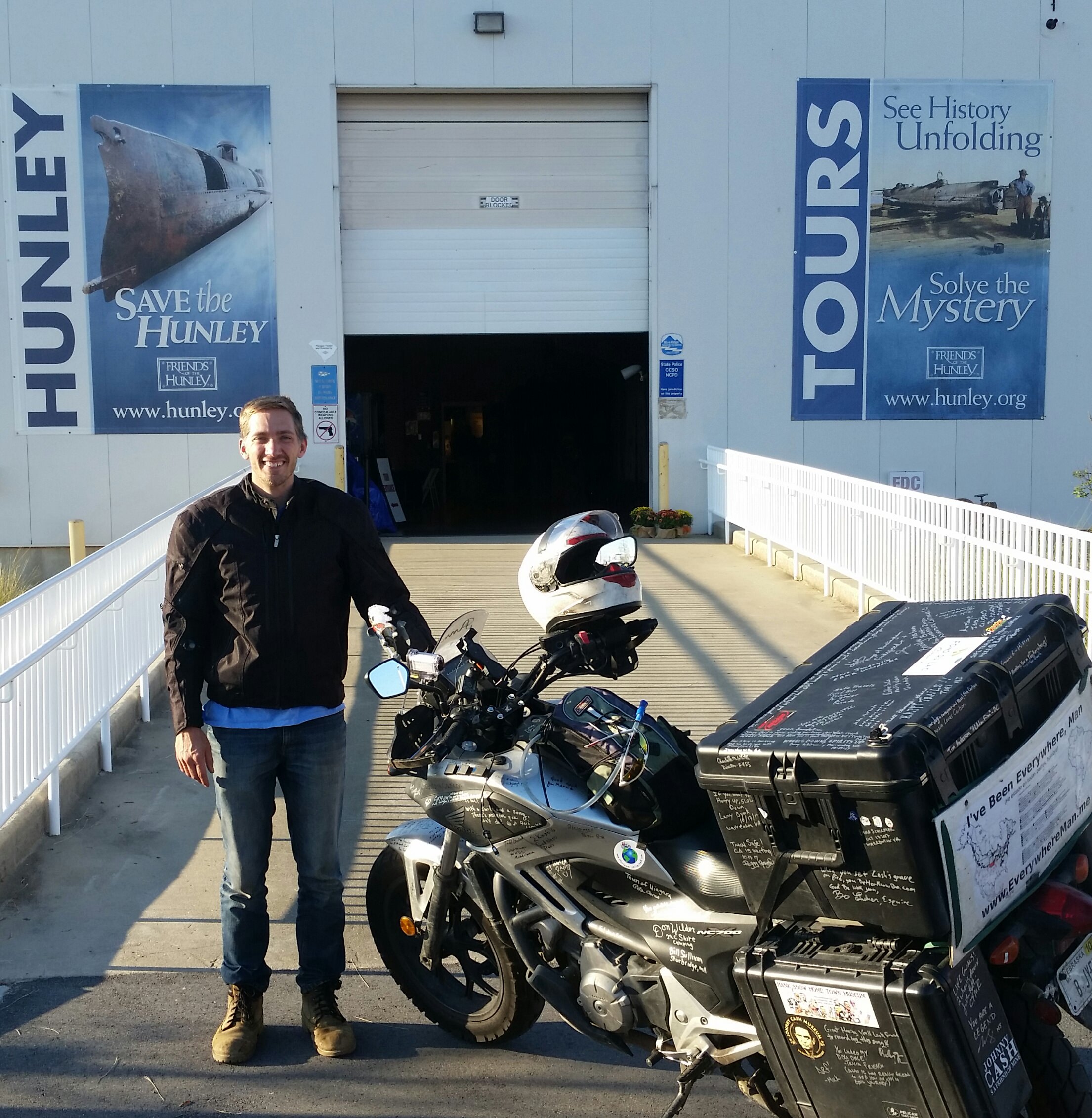 He had to run home, but I wanted to check out the Pacer. The show was close to ending so I rode over quickly. Eric had pointed out on a map where it was parked, so I was not wandering completely aimlessly (a real change for this story). I walked quickly through the throngs of people, scarcely giving notice to the myriad of well polished muscle cars. There was only one vehicle on my mind. It was right where Eric had indicated. 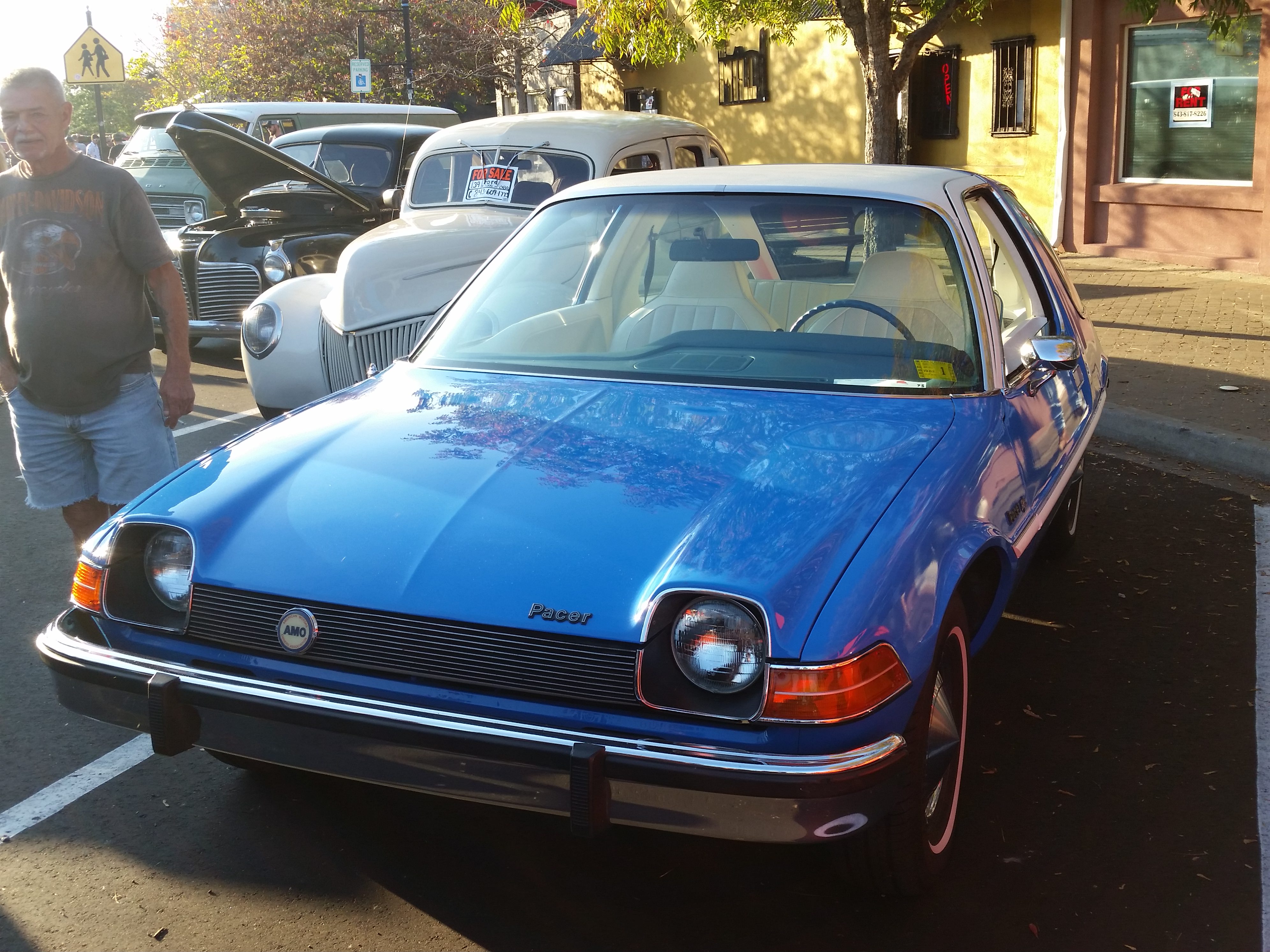 When someone sees my Pacer, they rarely ask about its horse power or top speed. Rather, they just smile. How can you not smile when you see this car?

A beautiful Gremlin was parked next to it. 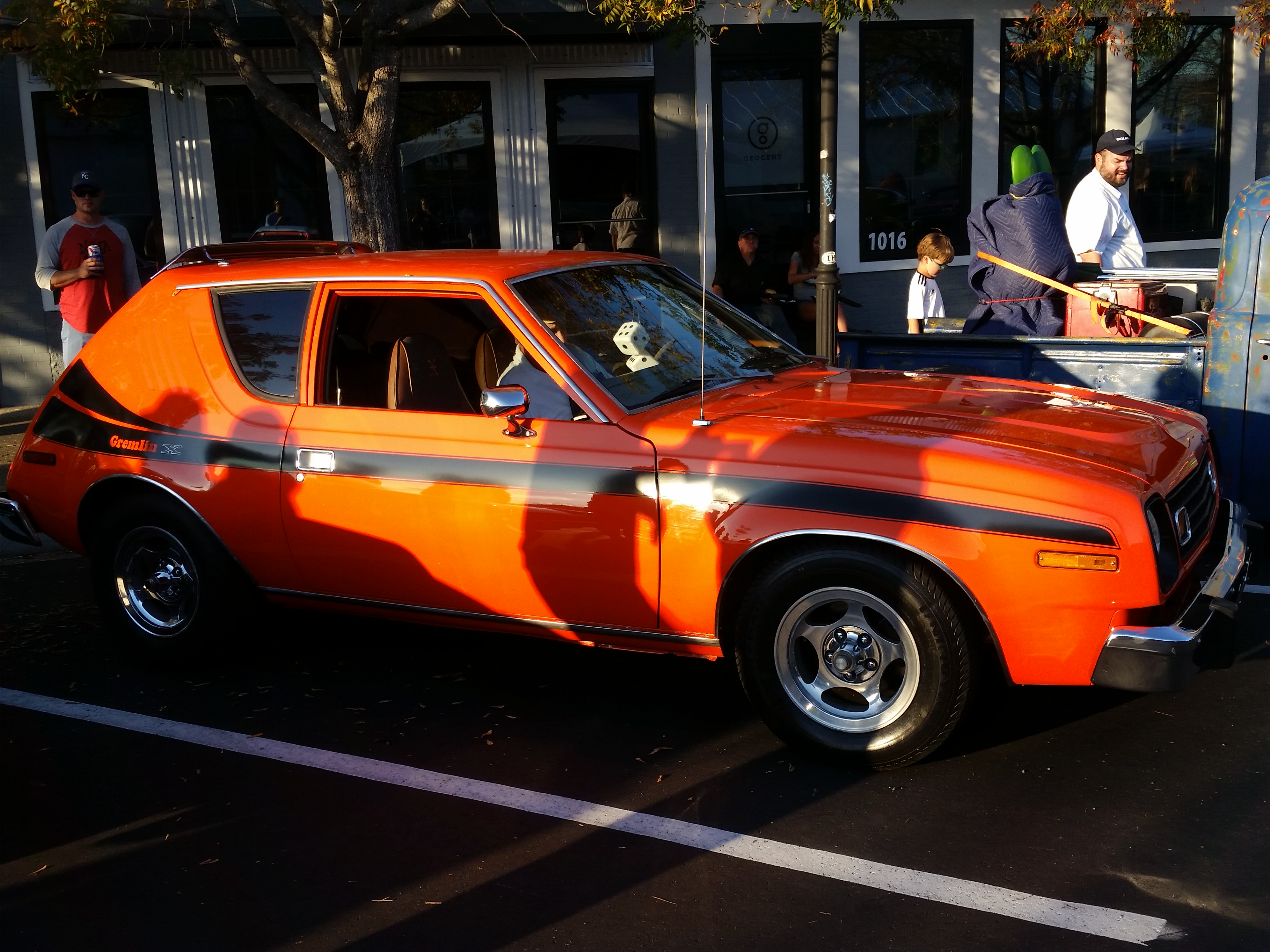 I waited around for about 15 minutes, hoping to get a chance to meet the owners. I did! They felt really lucky to have found the car. It only had 36k miles on it, having sat in a snowbird’s garage for nearly 20 years. (By contrast, my family’s Pacer has about 260k) 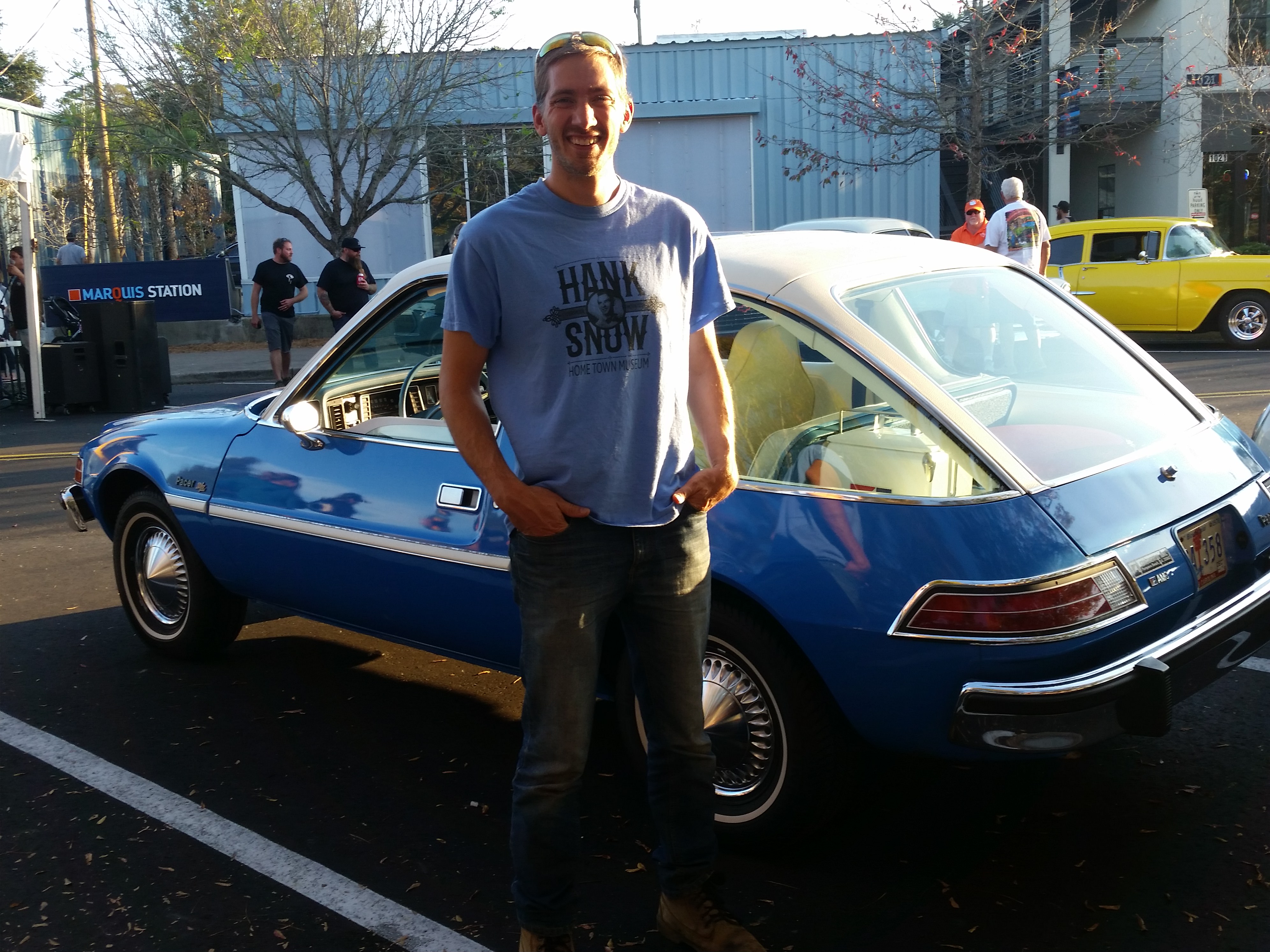 I can hardly imagine seeing two more unique vehicles in one day. A text from my Brother said it better than I can:

“You know, those two vehicles would make for a great Car and Driver comparison test. For example, the Pacer has never killed any of it’s passengers. The Hunley killed 5 people in a collision and I think about 21 of its passengers on three separate occasions. The Pacer, of course, is much faster and it did have air conditioning as an available option. That’s probably why they built more Pacers than they ever did Hunley’s.”

I proceeded to my host’s house. I got to meet Eric’s son, Ryan, and their retired racing greyhound, Bishop. Eric and I got to take our NC’s out to Trader Joe’s, where I met his wife, Hanna. 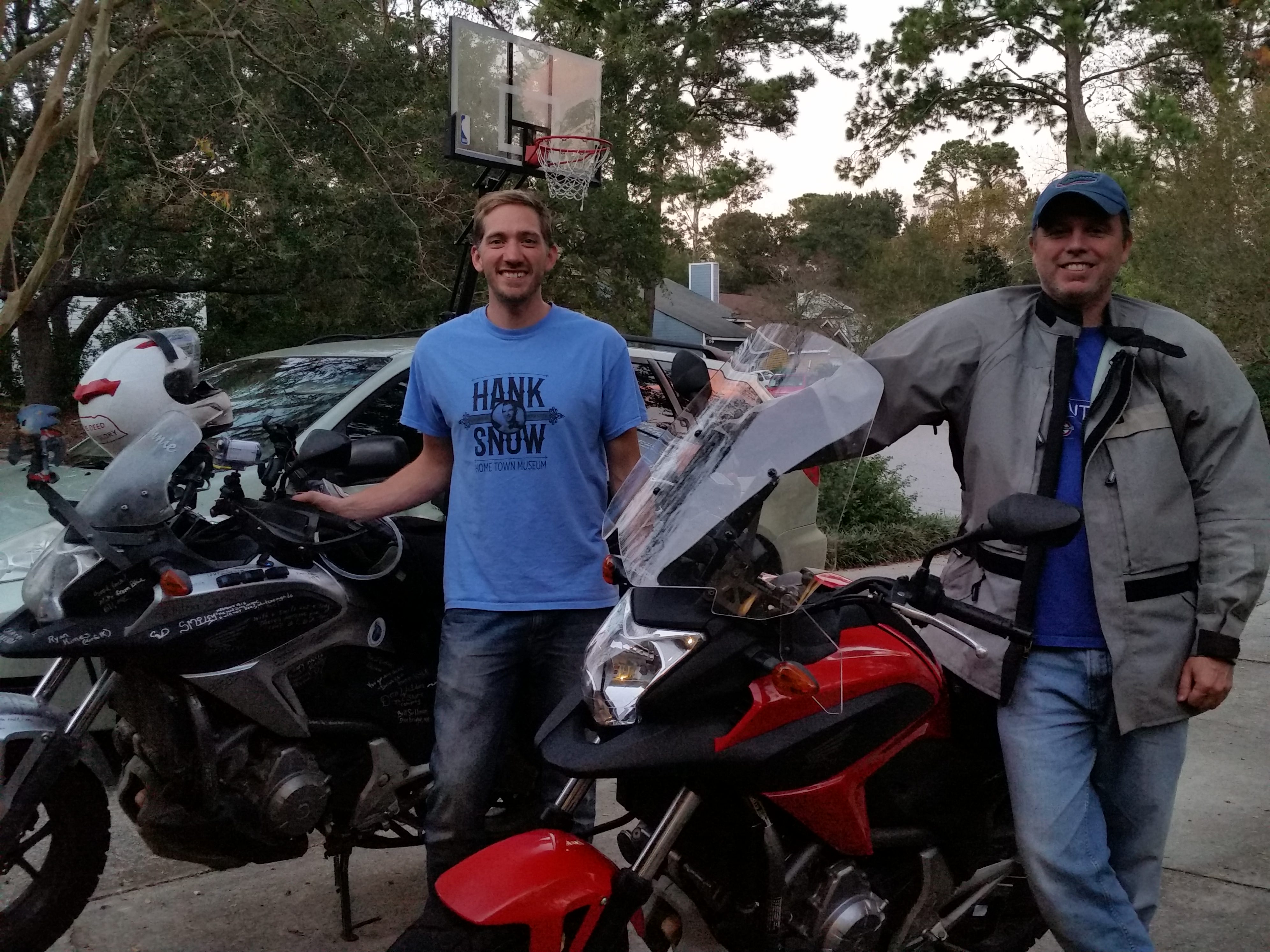 Knowing that I must be sore and tired, Hanna sent some bath salts with me and recommended a nice warm soak. Now remember, I’m from Nebraska. We don’t know much about these newfangled sort of things. At first I thought their tub was really small and I had difficulty working out where to put the salts. 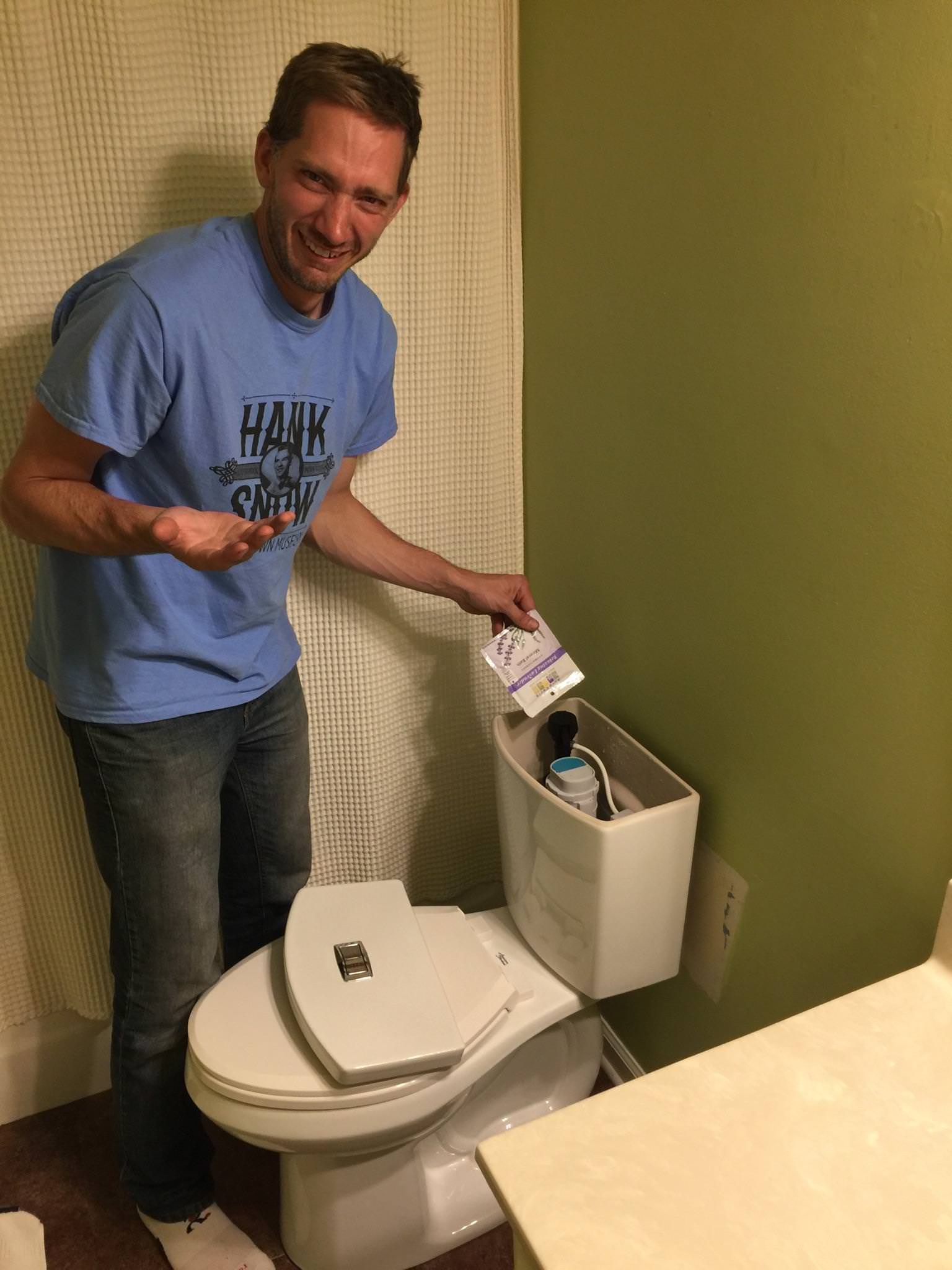 Thankfully, Eric got me straightened out and I had a relaxing time.

It was a lot of fun talking to all of them. They have done a lot of traveling. Hanna is from a small town in the Black Forest in Germany. They had some great pictures of their visits there.

They have also been to Barranquilla (Verse 1 Line 6), a city in northern Colombia.

Happy daylight wastings day! …or whatever it is called.

The time change did not matter too much to me. I still needed to be downtown at sunrise for my iconic Charleston picture. I was on the road in good time. Initially, it seemed like the skies would be clear, but that was not to be my fate. The clouds were dense.

I decided to proceed to my intended destination and see if I could get my picture anyway. If you would kindly imagine a beautiful sunrise behind this: 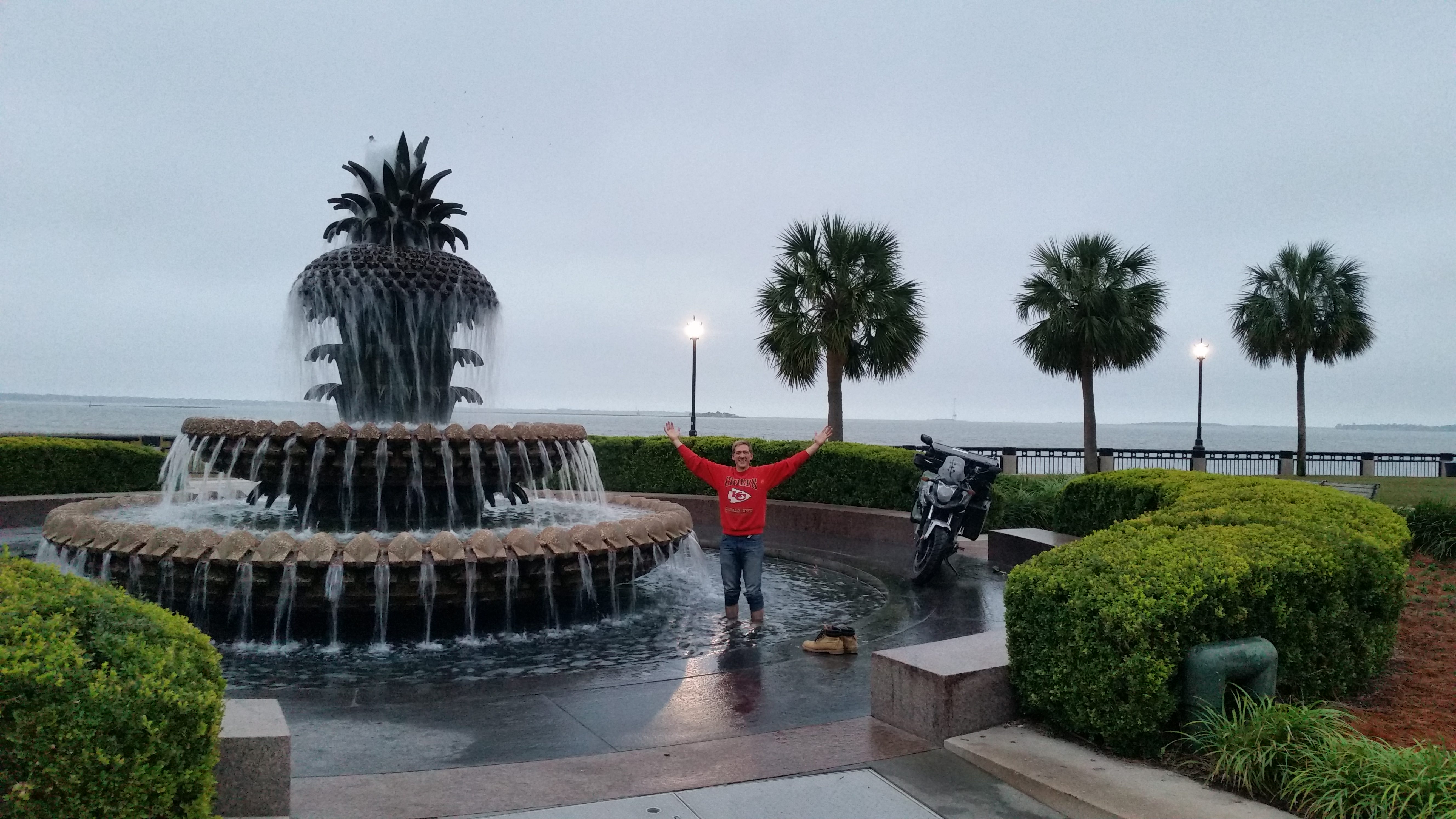 A gentleman walking around with a Howlitzer-sized lens on his camera informed me that I should have been there yesterday. Apparently the sunrise was spectacular. 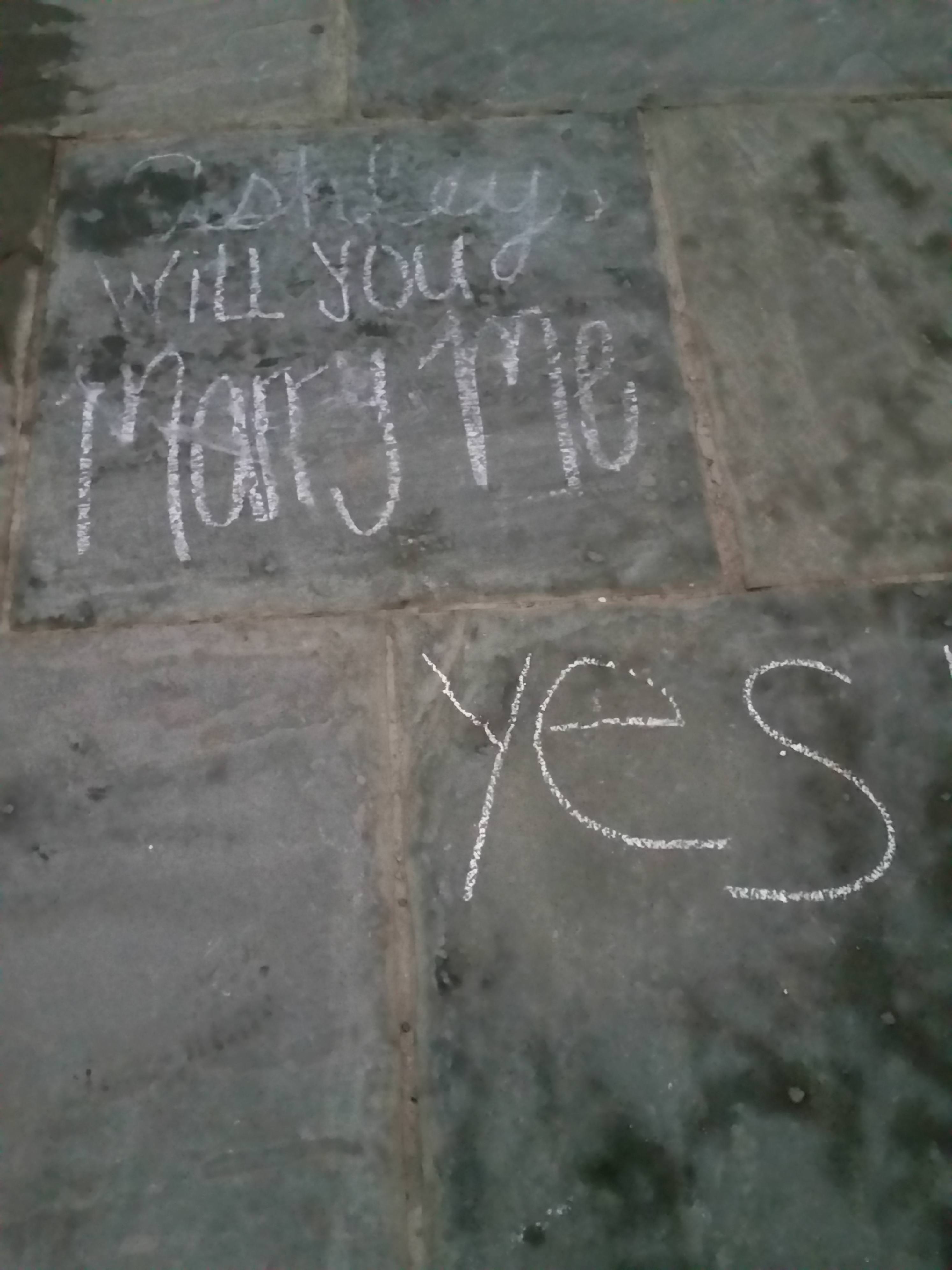 The above photo worries me a bit. Can a relationship survive when the man has better handwriting than the woman? Hang in there, Ashley.

I checked out some more of the downtown area. Some of the cannons and armaments on display were actually cast in Chicopee (Place #30). I couldn’t find an inscription to indicate which ones. 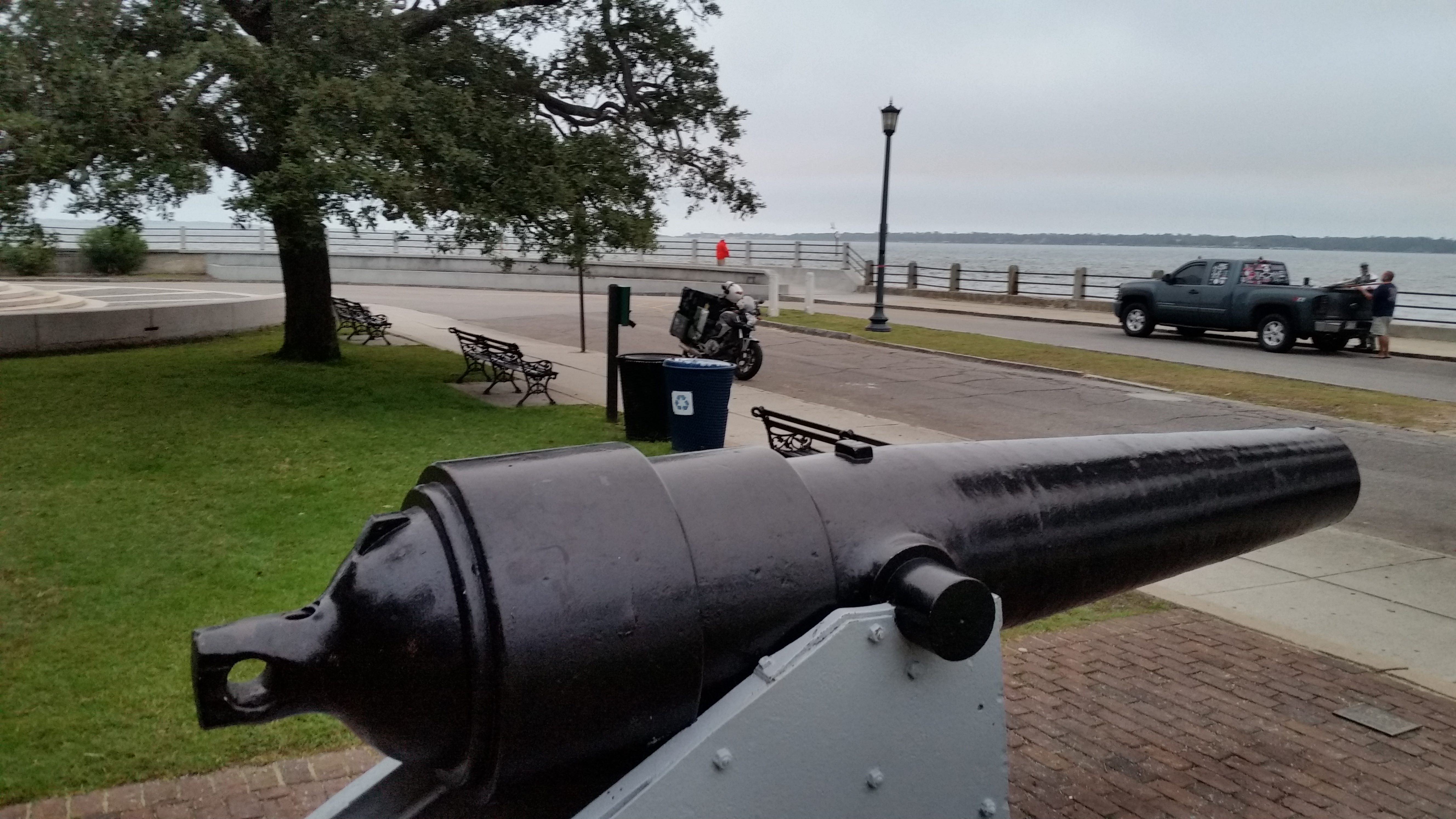 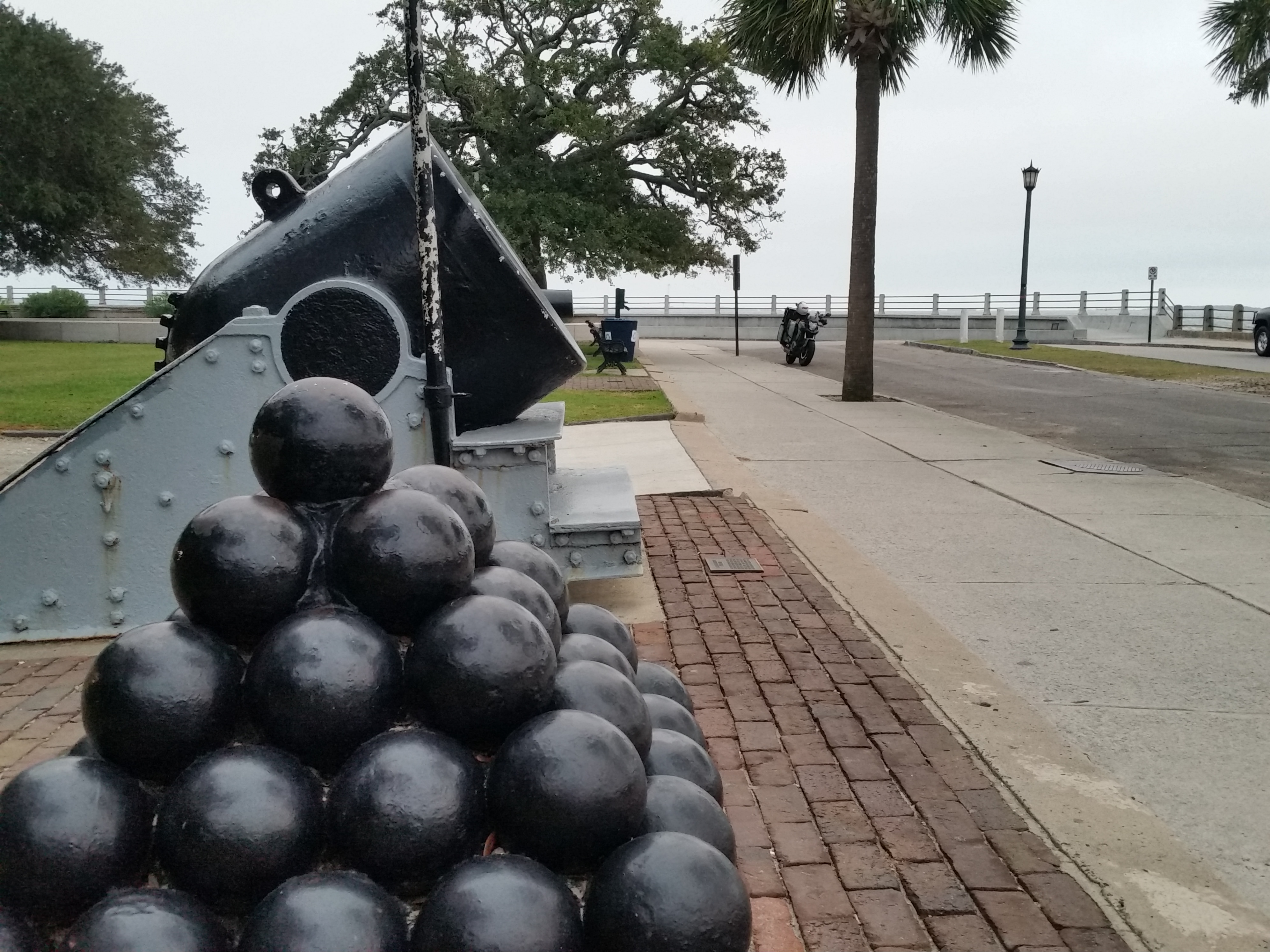 There’s a ridiculous amount of history in this city.

I accidentally drove passed a full size replica of the Hunley outside of the Charleston Museum. 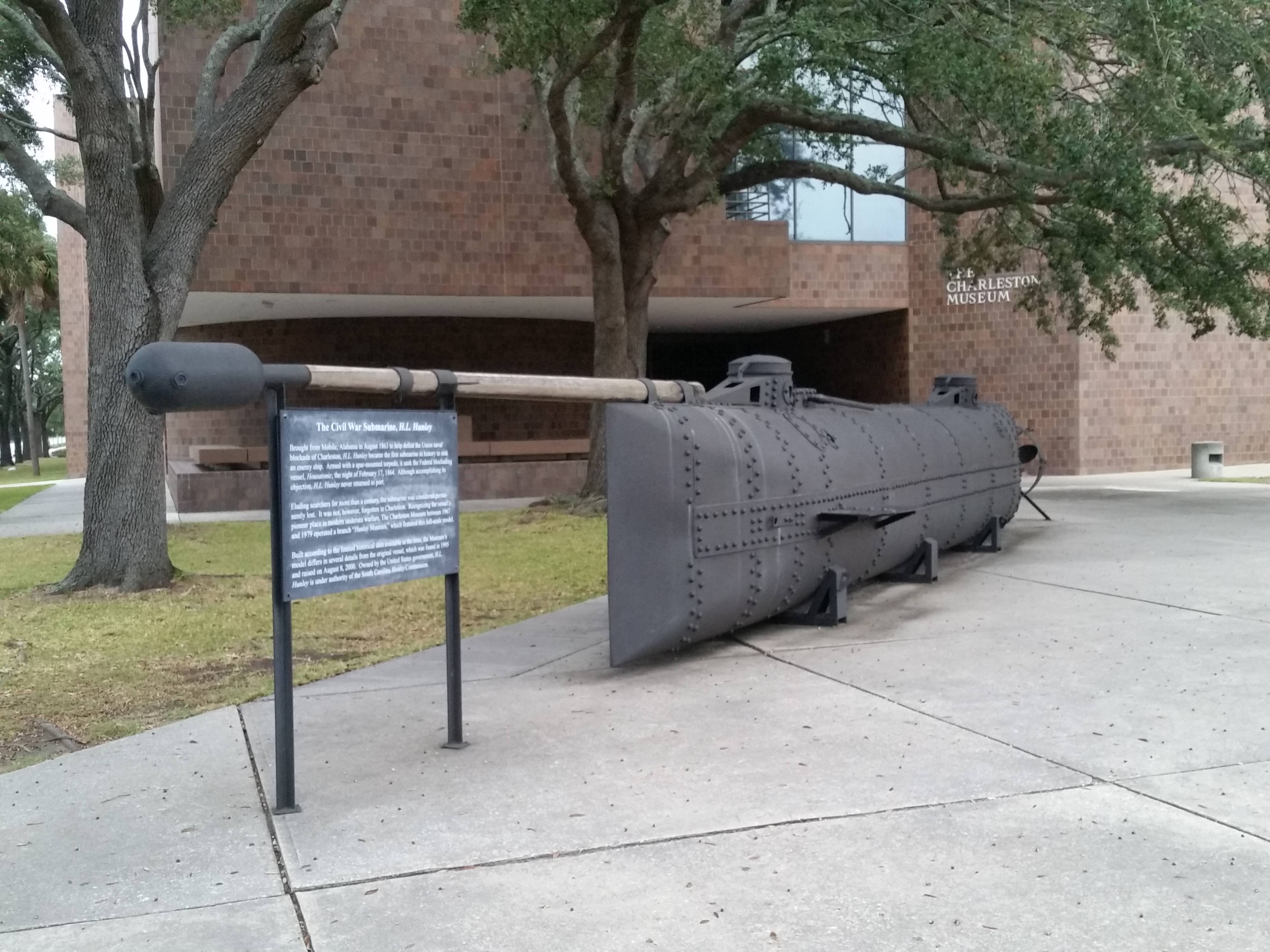 This replica was built before the sub was found, so a number of things are not quite right, but they did a great job using the information that they had. 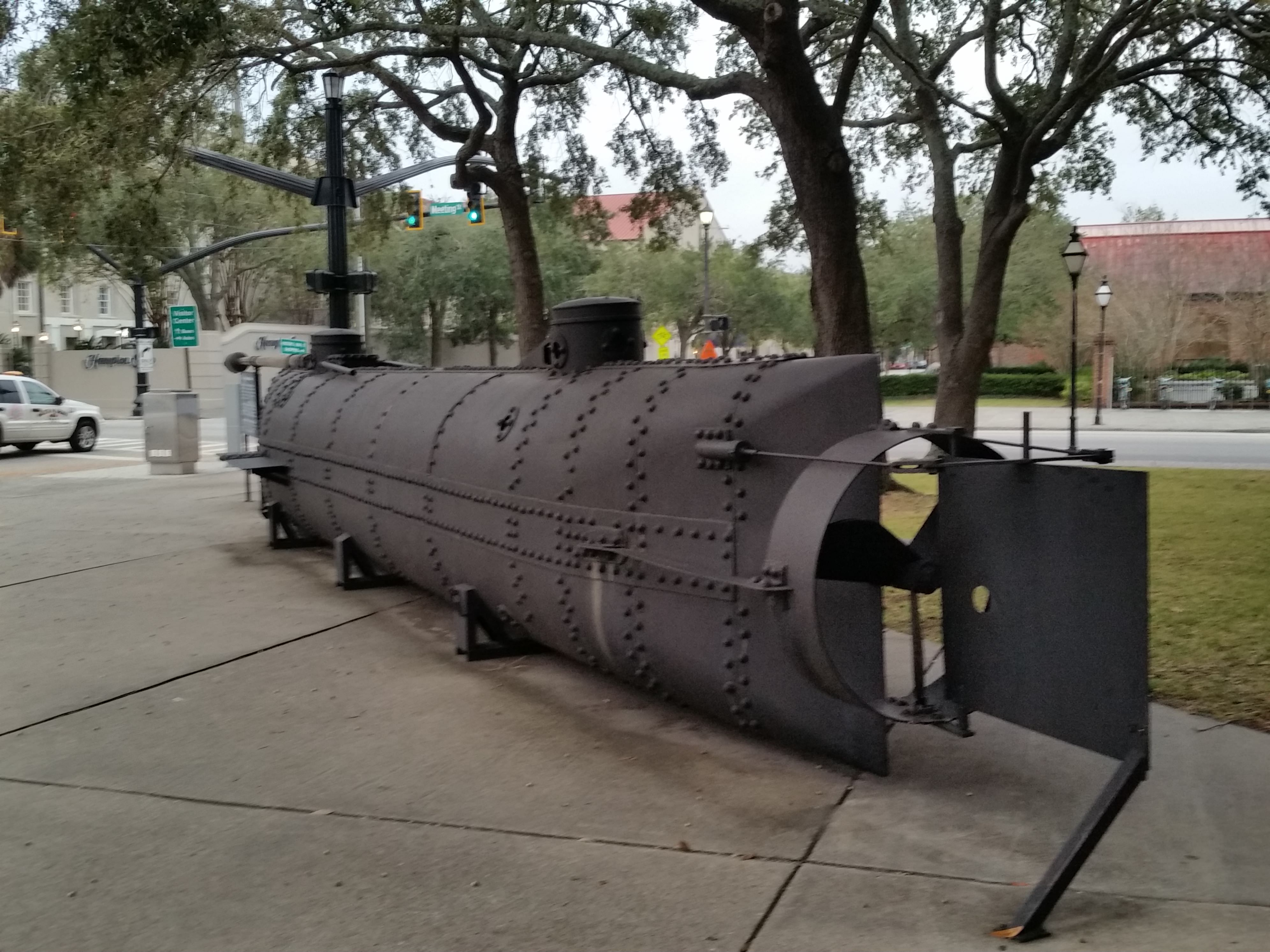 I returned to Eric’s place and we took Bishop on a walk around the neighborhood. I made Swedish egg coffee for him and Hanna and they fixed me an Ovaltine latte. You know it’s a good morning when the coffee comes in courses. 🙂

Eric and I went on a ride down to the beaches of Mt. Pleasant. I decided to give Annie a break and took their Yamaha XT250. It was fun to ride something you can really toss around. 🙂 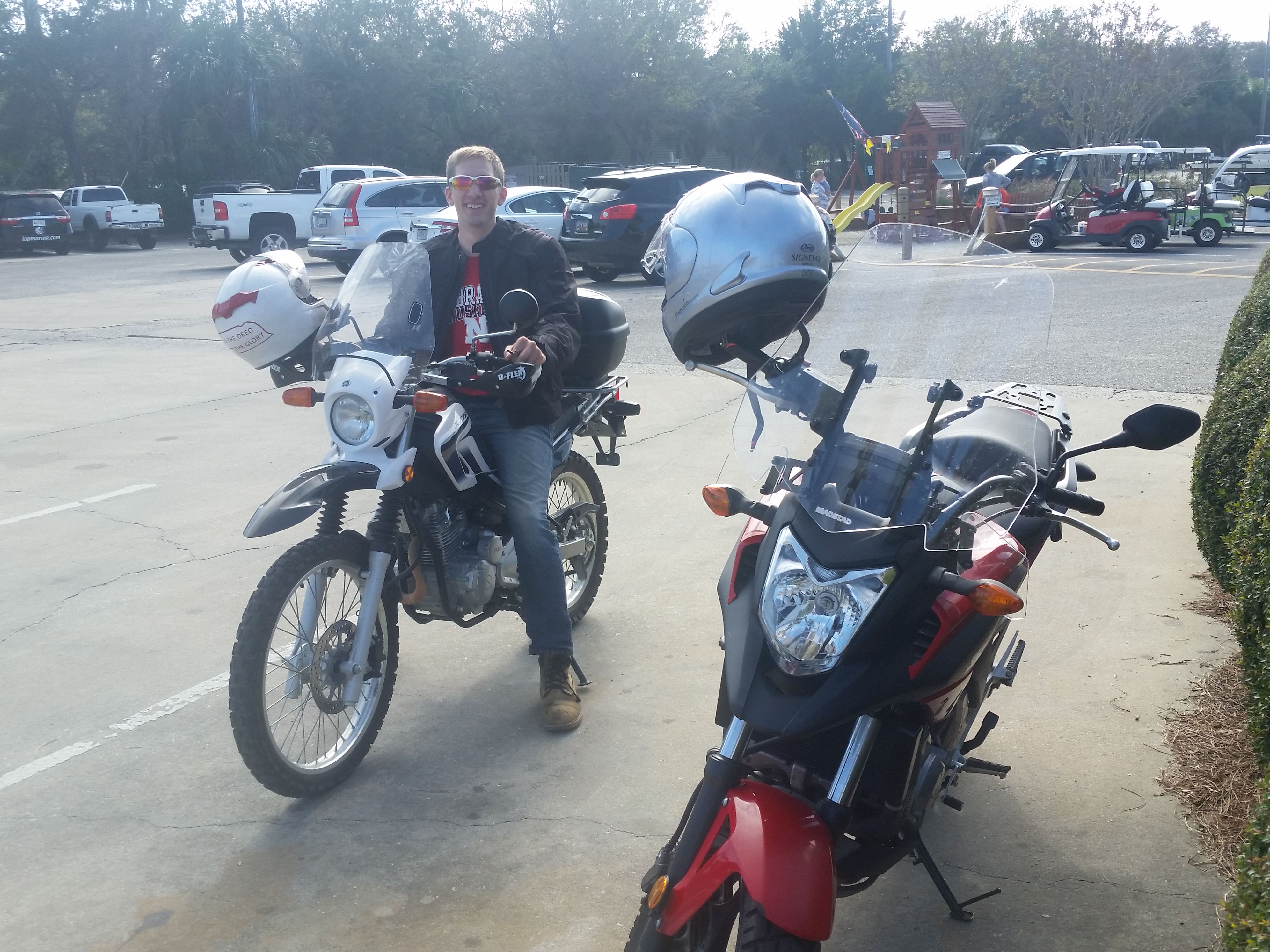 Eric bought me a great lunch at one of the marinas. 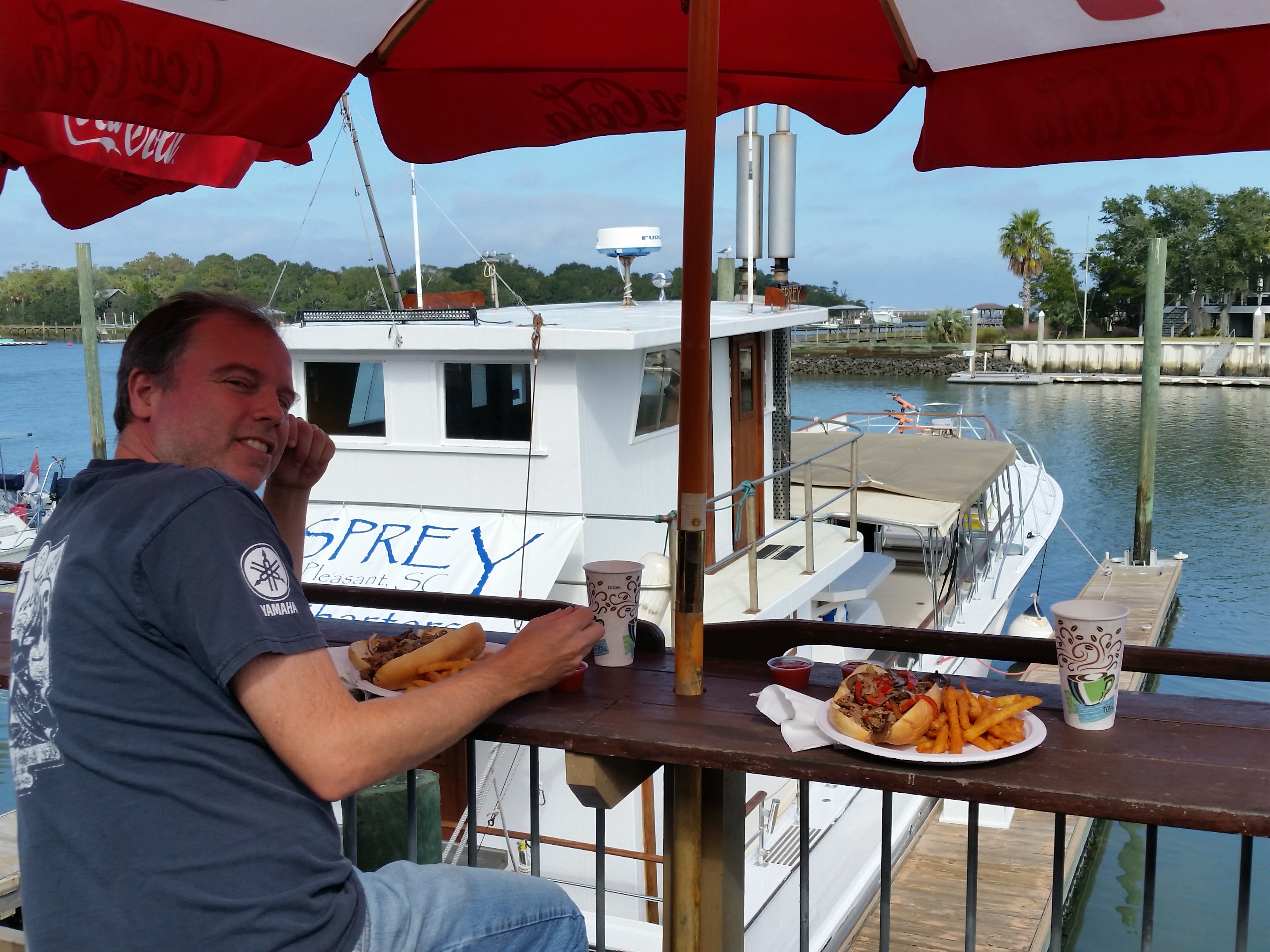 We explored around Fort Moultrie… 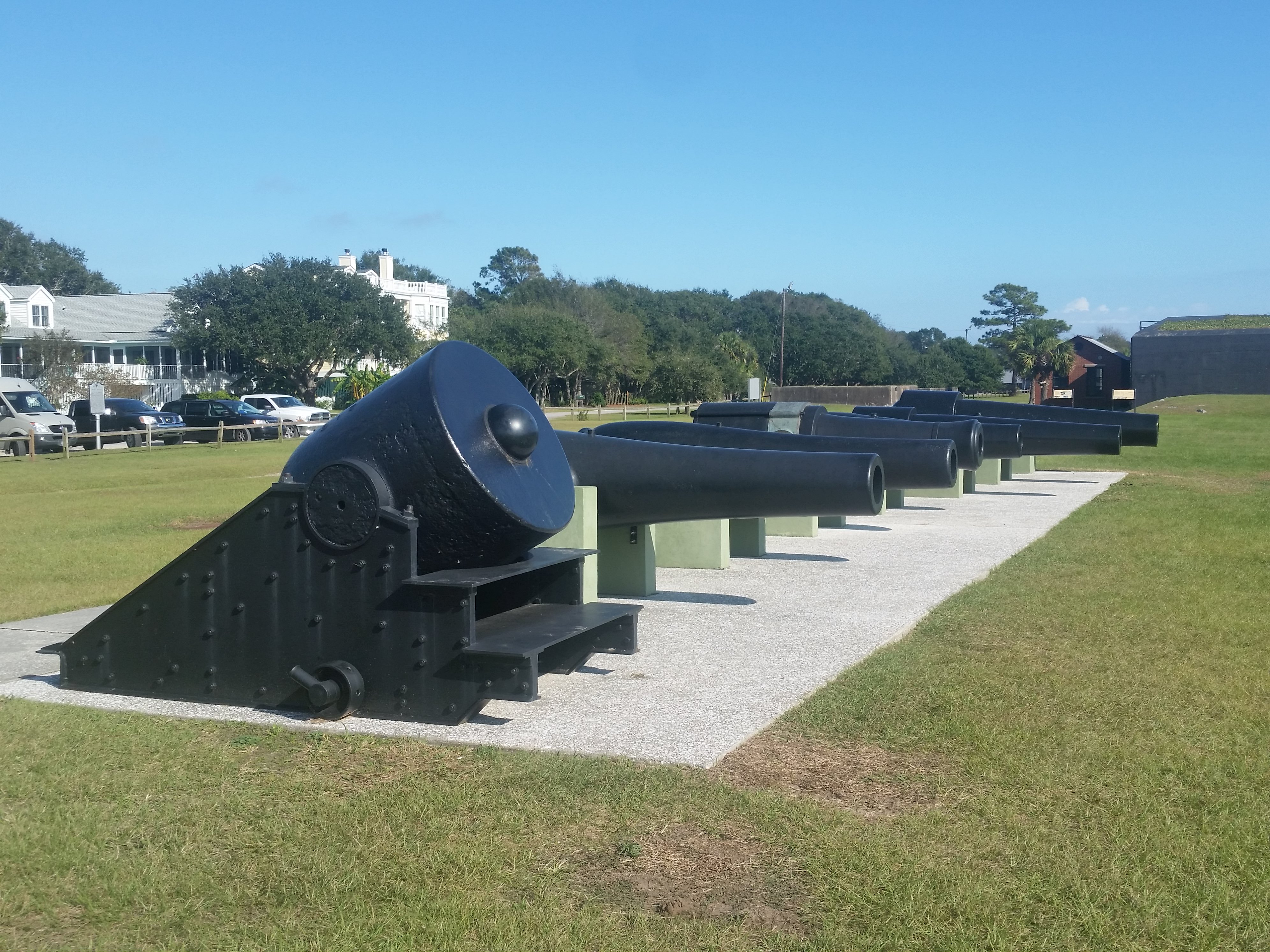 …and got a nice view of Charleston from a distance. 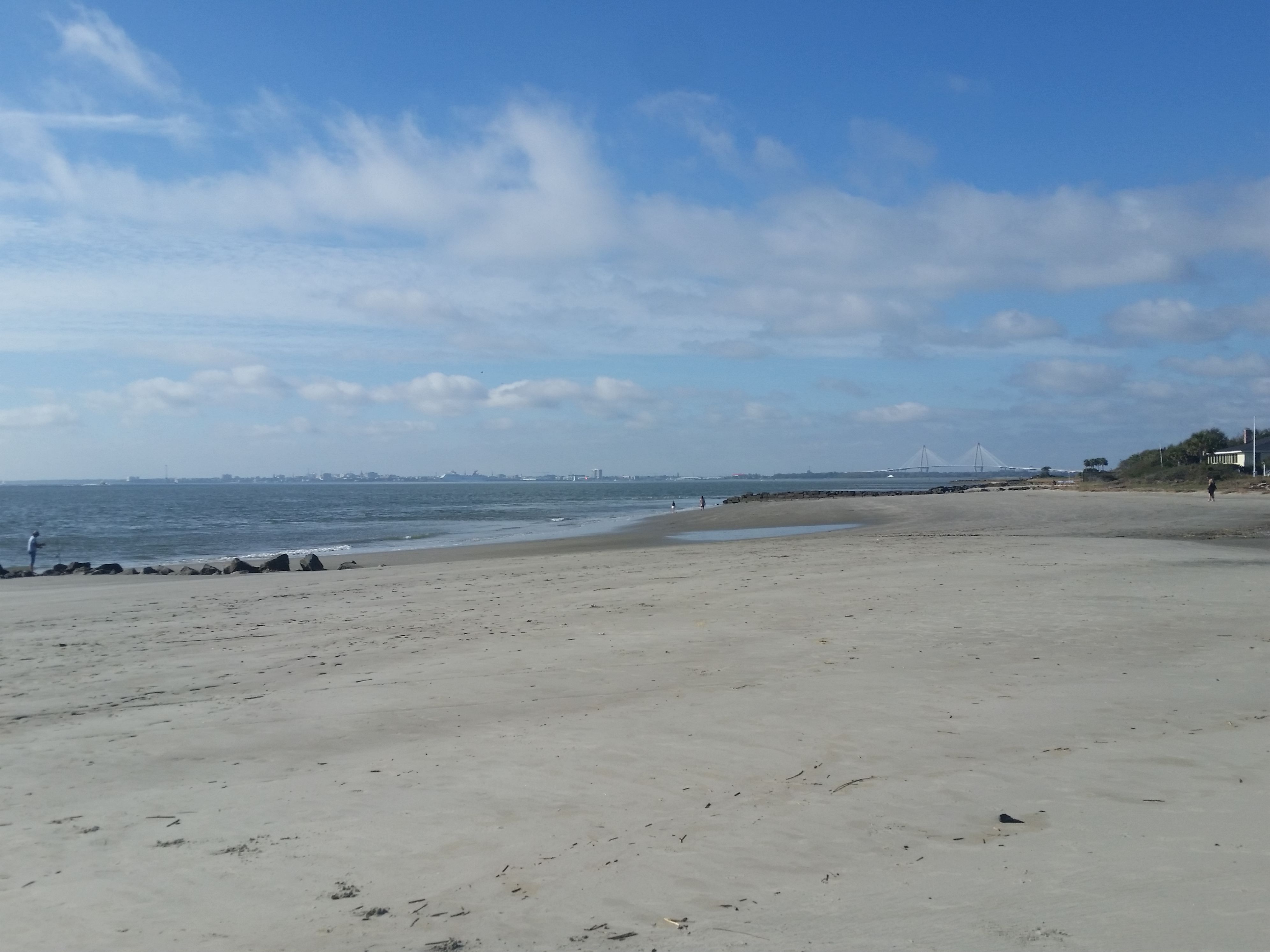 Eric and Hanna invited me to stay for a second night. I graciously accepted. I wanted to take another shot at the sunrise photo the following morning. Plus, staying there meant I got to watch the Chiefs game (where they beat the Broncos). It was a good decision.

We had our signing ceremony that evening, with Ryan taking the honors. Charleston was place number 45 of 92. 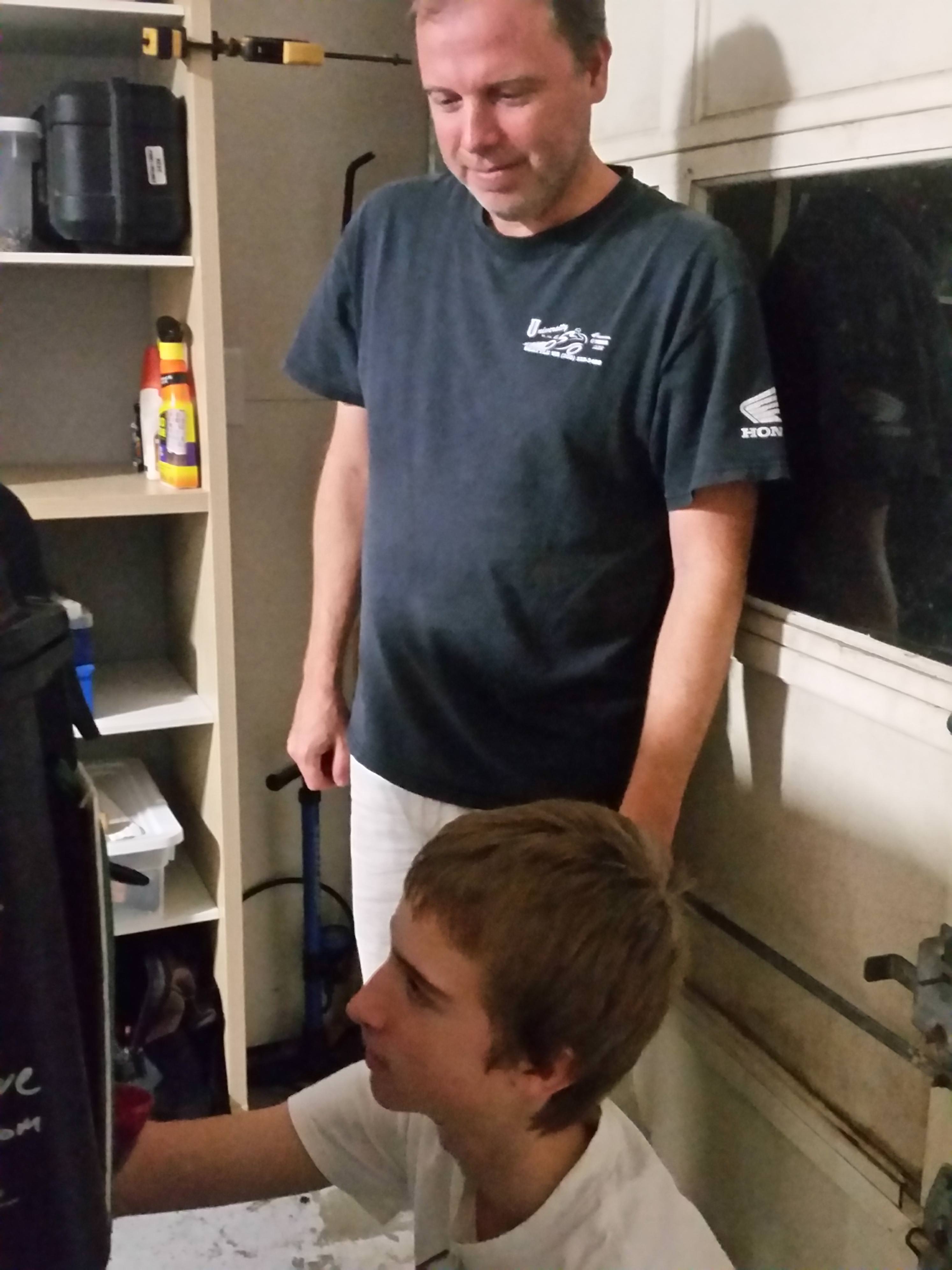 Hanna wrote a nice poem on the front side of my trunk. She apologized for taking so much space, but I like it. 🙂 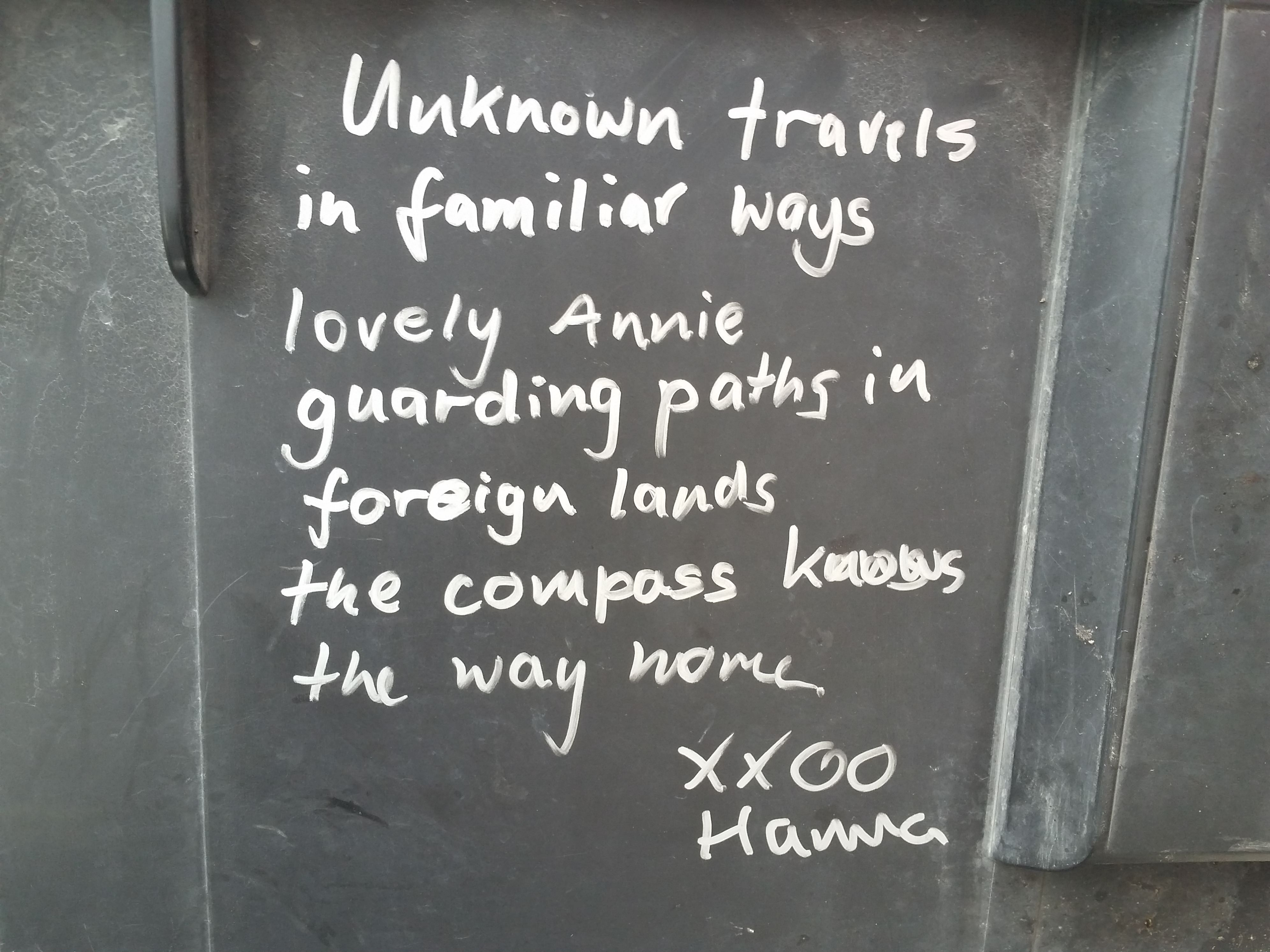 Plus, how often does Annie get called “lovely?” 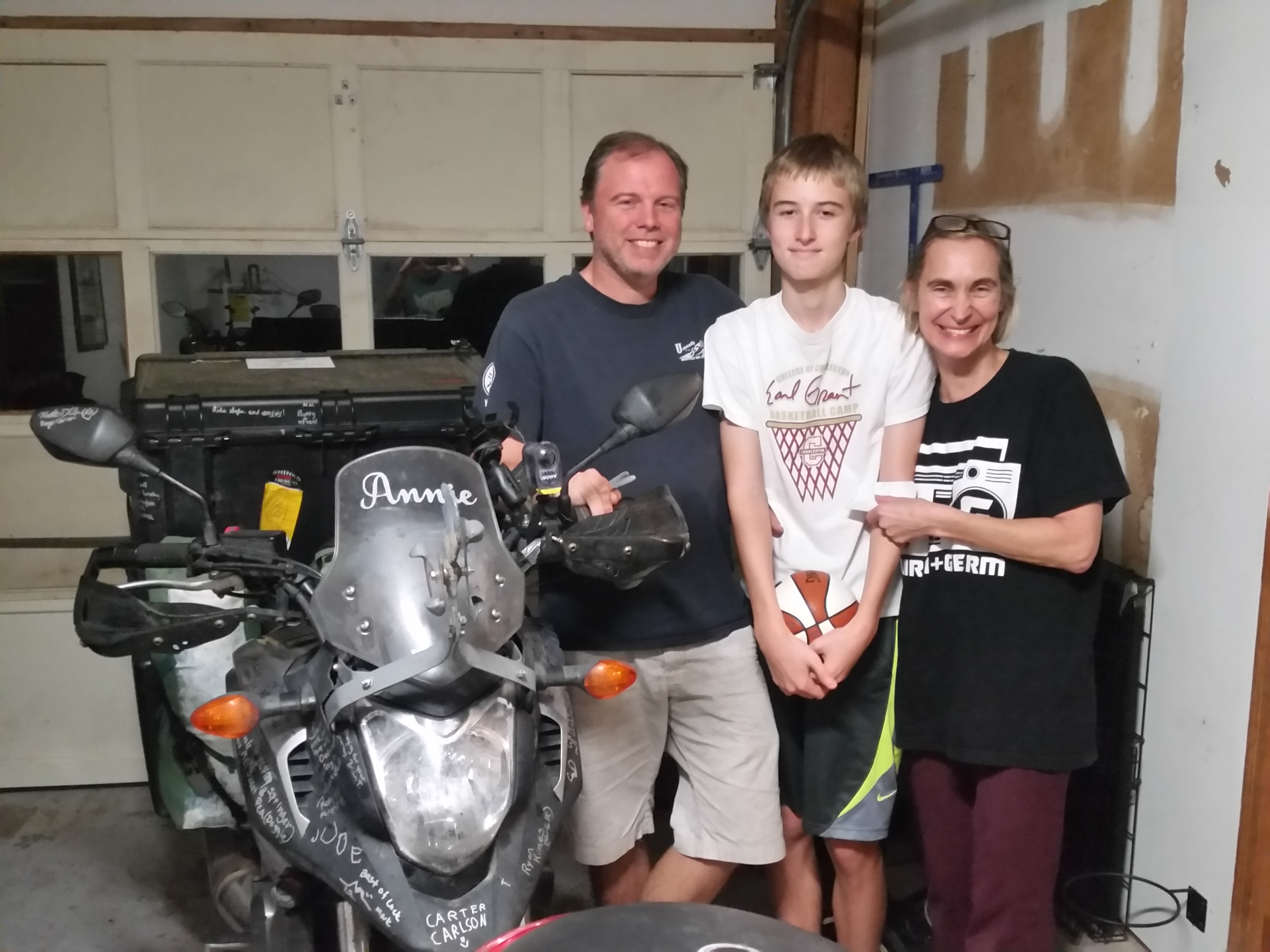 What wonderful hosts! I am so thankful that Eric reached out to me. I can’t imagine being taken care of any better than I was.

If at first you don’t succeed, keep getting up before sunrise until you do.

I saddled up in the dark and made my way towards the fountain, hoping to get a brilliant sunrise behind it. Alas, it was not meant to be. It was another gray morning. I took a couple of pictures and got out of town. 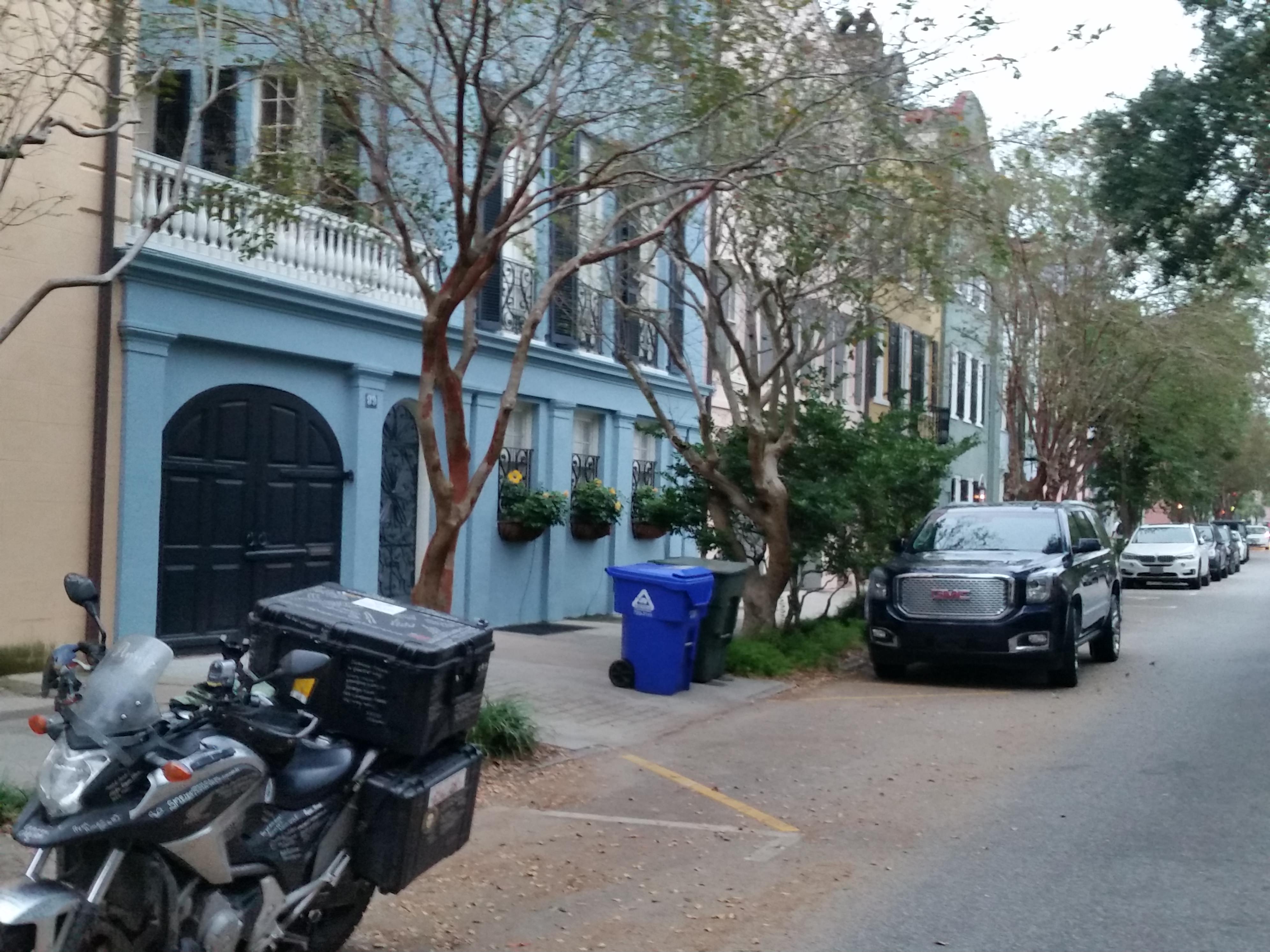 Better than the road to Ombabika: 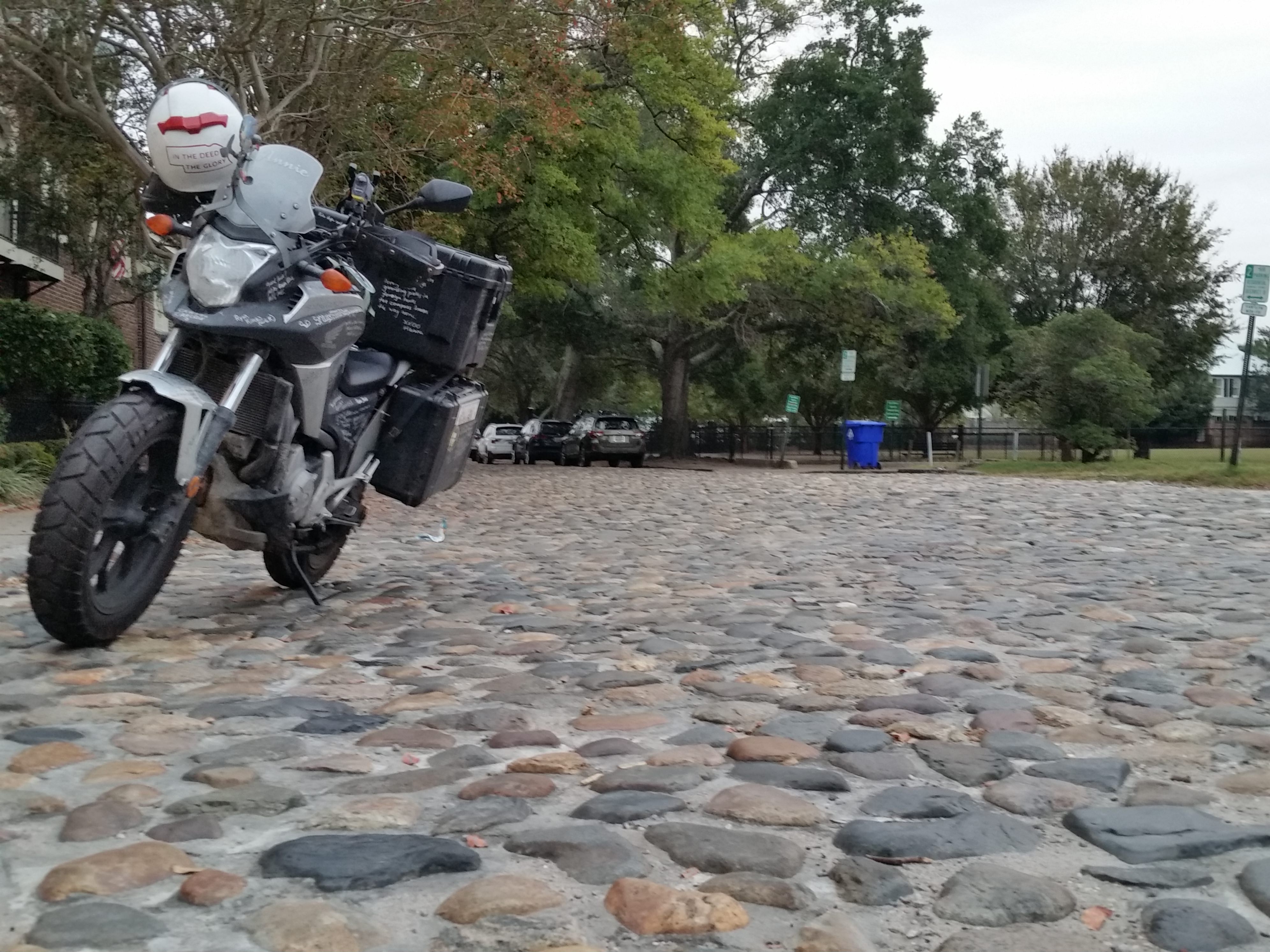 I made my way towards the next song stop: Jacksonville, FL. Crossing this place off of my sign would signal the mid-way point in my journey.

As always, thank you for reading! I haven’t loved my writing recently, but I’ll keep trying!

Realtime update: I’m being hosted in Summerville, Georgia by some wonderful people I met in Nova Scotia. I’ll be making some decisions over the next few days. For sure, I will visit Tallapoosa, Opelika, Atmore and Vicksburg…then we’ll see. I’m ready to get back home for a break.