Some stories and some characters are compelling enough, that they need to pop up again in this story. The journey continues with some refreshing reconnections.

Realtime update: Happy Thanksgiving! It’s that time again, when a loop ends and my writing suffers! For some reason, it is just so much harder when I am home. I still hope to get caught up in the next few days so I can turn my attention to the intense planning phase to come. I currently sit on a comfortable couch next to a roaring fire in my parent’s living room. I can’t tell you how good it feels to be home. 🙂

I got a later start than I would have preferred, not leaving my hosts until around 2pm. This left precious little daylight remaining in which to make progress. I didn’t even make it to Ocala before deciding to settle down for the night.

I pulled over at a rest stop and saw a little path through the trees along the fence line of the rest area’s property. I walked down and found a “perfect” (quotes explained later) spot to set up my tent. It was out of headlight view and very secluded.

I waited for a little break from the onlookers and took Annie down the path. It was then that I realized my folly. Though the ground looked grassy, it was just a thin layer above bog-like mud. In the morning I would see the swamp of standing water just across the fence. 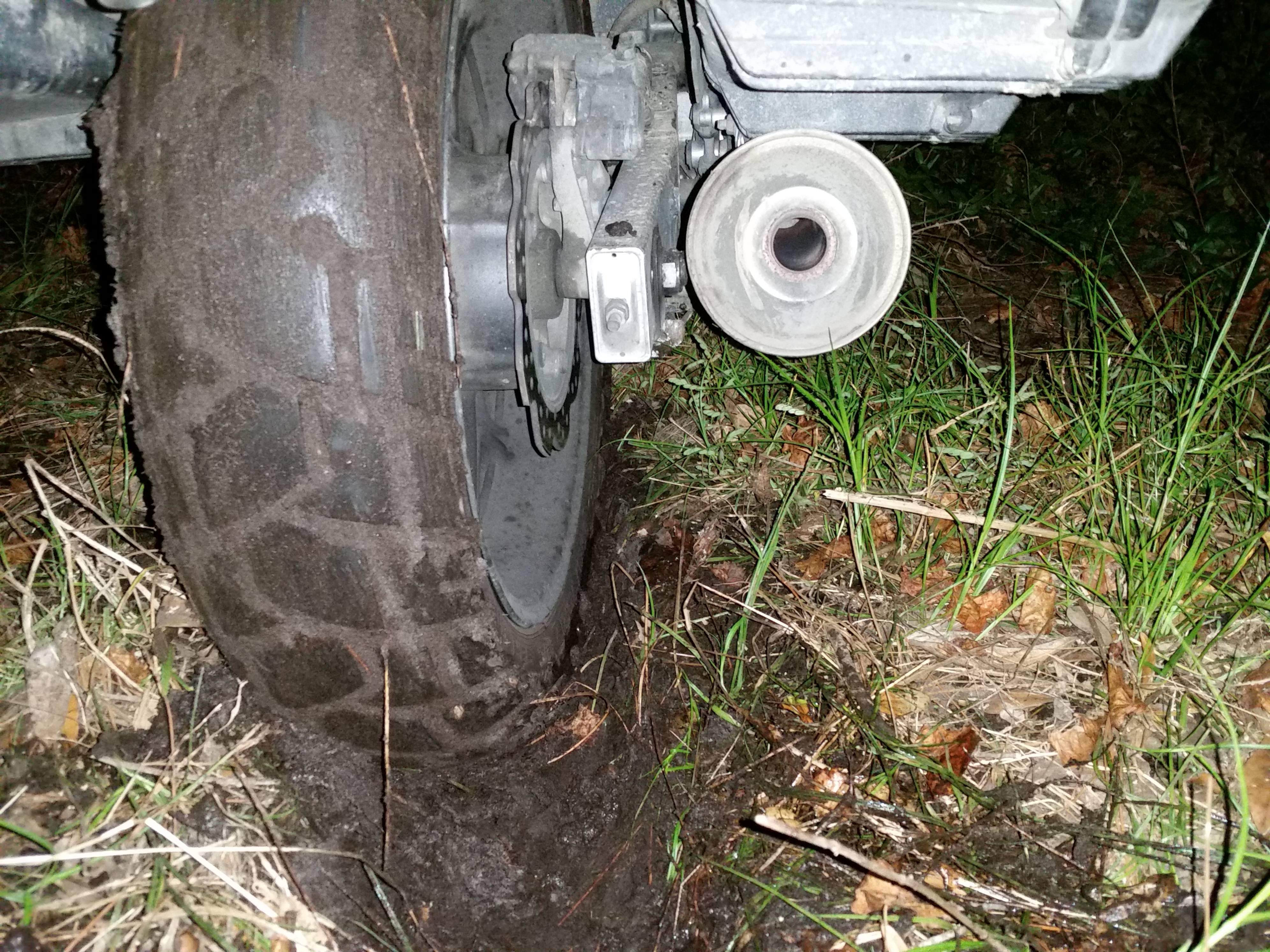 I spent about 30 minutes just trying to get Annie turned around. I had to push and apply throttle at the same time, a difficult technique. Eventually she was pointed in the right direction. 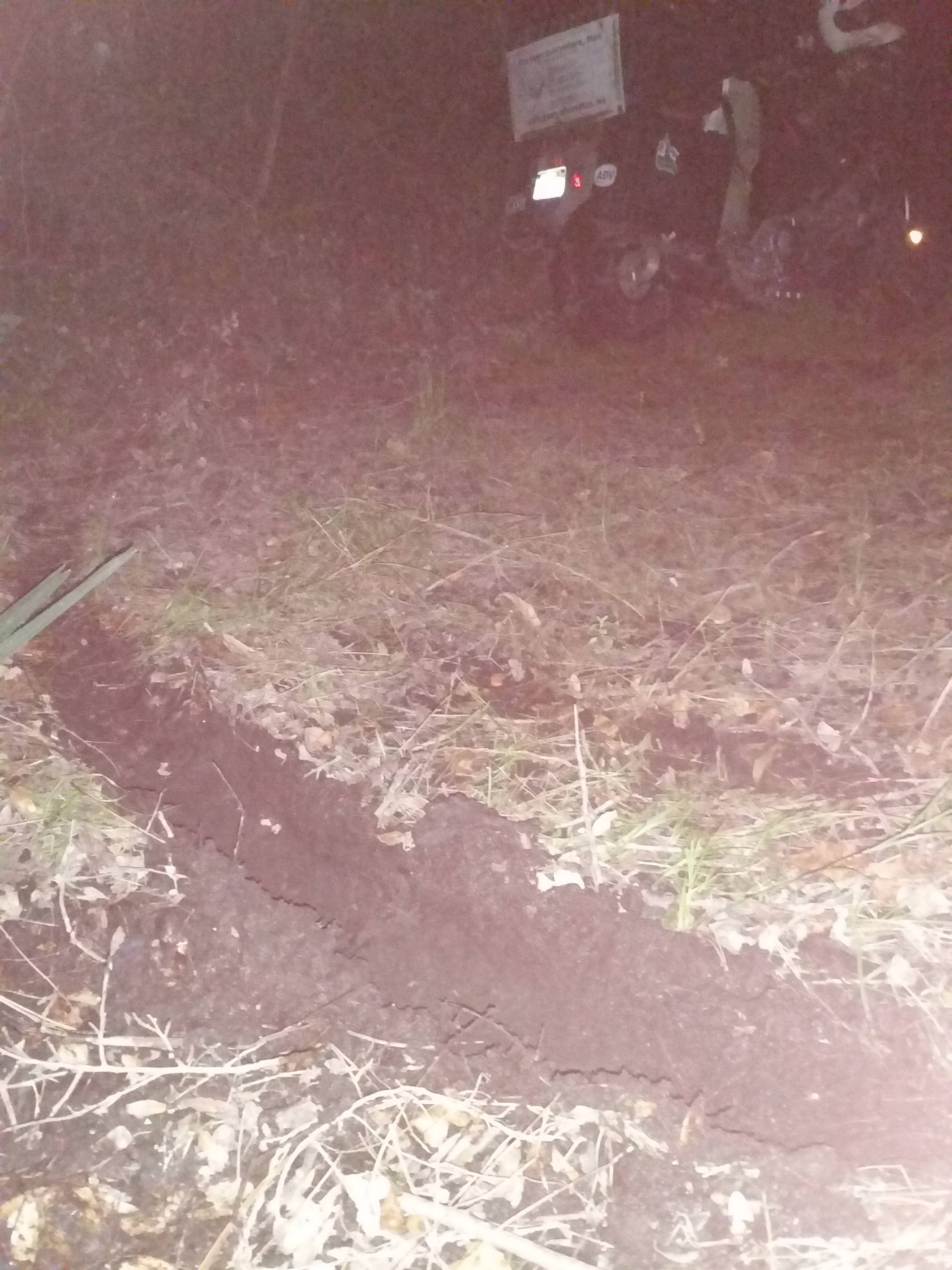 I still decided to camp there, hoping I wouldn’t be swallowed into the muddy abyss. I actually had a pretty good night. 🙂

So where was I going? I guess I should answer that. Do you remember my experiences of generosity in Nova Scotia (from THIS POST)? I was going to be staying with a couple I had met there, Jim and Susan. 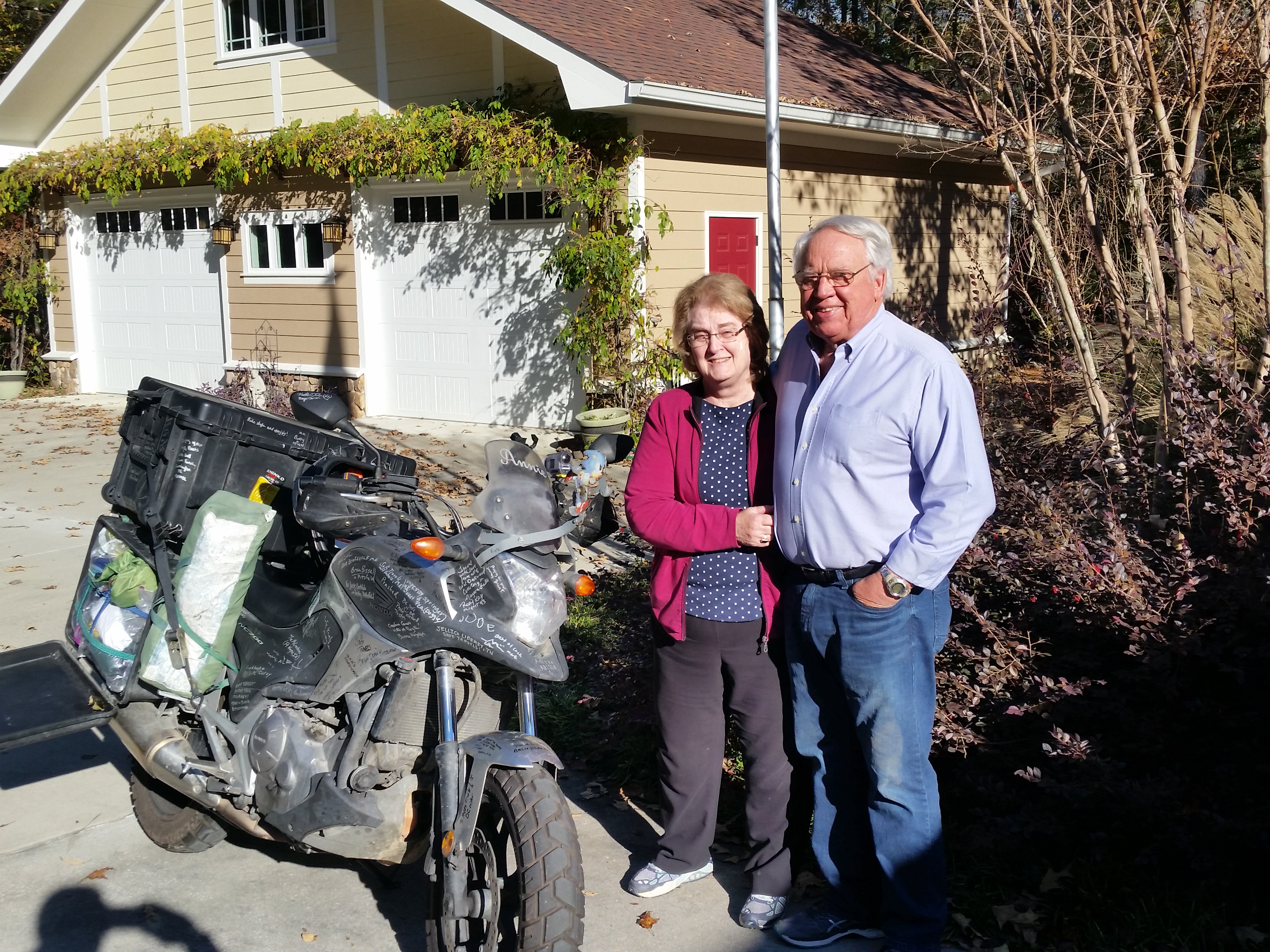 Here is the excerpt from that post when I was sitting at the back side of the Hank Snow museum on a Sunday morning before it opened:

“I returned to my wifi window at the museum and resumed my work. I was a bit surprised when a gentleman rounded the corner with a camera in hand. I explained briefly that I was camping here and had permission to be on the grounds. He simply responded with, “Well, I hope you’re not working.”

I began to tell my story. He stopped me politely, saying, “Hold on, I need to go get my wife. She’s gotta here this”

That’s how I met Jim and Susan check from Georgia. They were the first Americans I had talked to in 11 days, since meeting the New York/German/Bangladesh couple in Kingston, Ontario.

They seemed to get a real kick out of my story and I enjoyed talking to them. Our conversation ended with them inviting me to stay with them when I get to Georgia. As Jim was shaking my hand, he passed some folded bills to me. I was hesitant to accept, but there was no way he was taking them back. I merely tried to express my gratitude as best as I could.

After they left, I unfolded the bills to find that he had passed me $60 (equivalent to 973 miles of gas). Water began to well in my eyes. No, not because Canadian money is so hideous, I was truly moved by the gesture.” 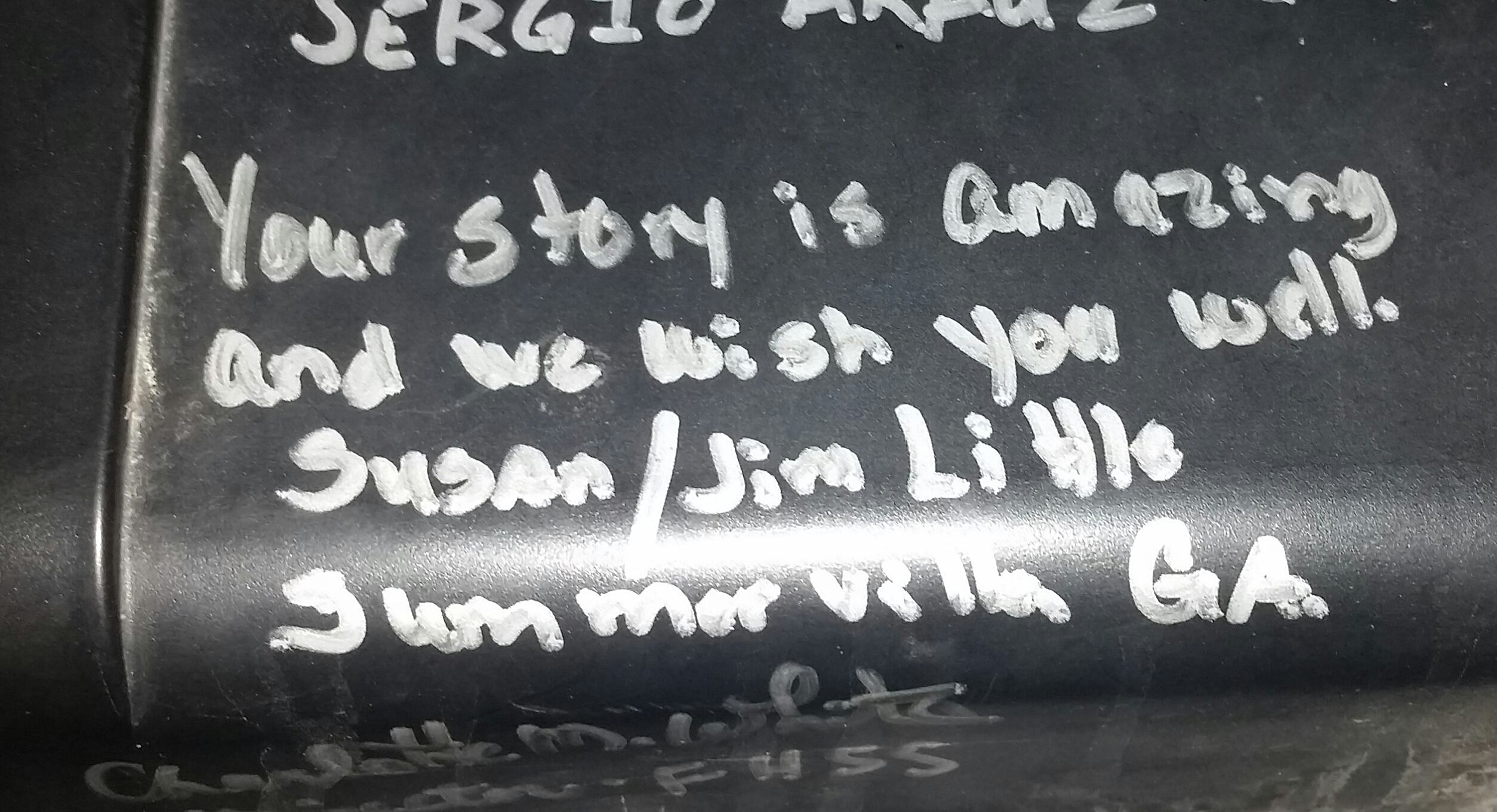 It was very obvious that they were really serious about their offer to host me. I decided early on that their place would be an essential stop. For some reason, I made a bit of a geographical blunder. In my mind, I was placing Summerville in SW Georgia. A few days before I departed for their place, I realized my mistake. I had been less than 40 miles from their house when I went from Huntsville, AL to Jellico, TN. That would have been the ideal time to stop in.

Still, I thought a detour to see them would be worth the extra miles. I had a sneaking suspicion that they would be wonderful hosts. 🙂

Here’s the approximate drive of the day:

Not much to say about my riding. It was all freeway. The temperature continued to drop as I headed north. I did not get completely suited up soon enough and the cold got deep into my bones. Getting “uncold” on a motorcycle is nearly impossible.

The final stretches were some winding, dark roads which made me a bit uncomfortable. For being a guy who “never rides in the dark,” I seem to be doing a lot of it recently.

I first met Jim and Susan’s son, Matt. He provided food, drink and wonderful conversation until Jim and Susan came home. Matt and his family live just down the road. It was great to get reacquainted/acquainted with my hosts. I enjoyed hearing them recount the conversation they had with their family of my potential arrival.

“We met this nice guy from Nebraska on a motorcycle in Nova Scotia and invited him to come stay at our house.”

“Well, how long have you known him?”

My accommodations were a significant upgrade from the bog alongside I-75. 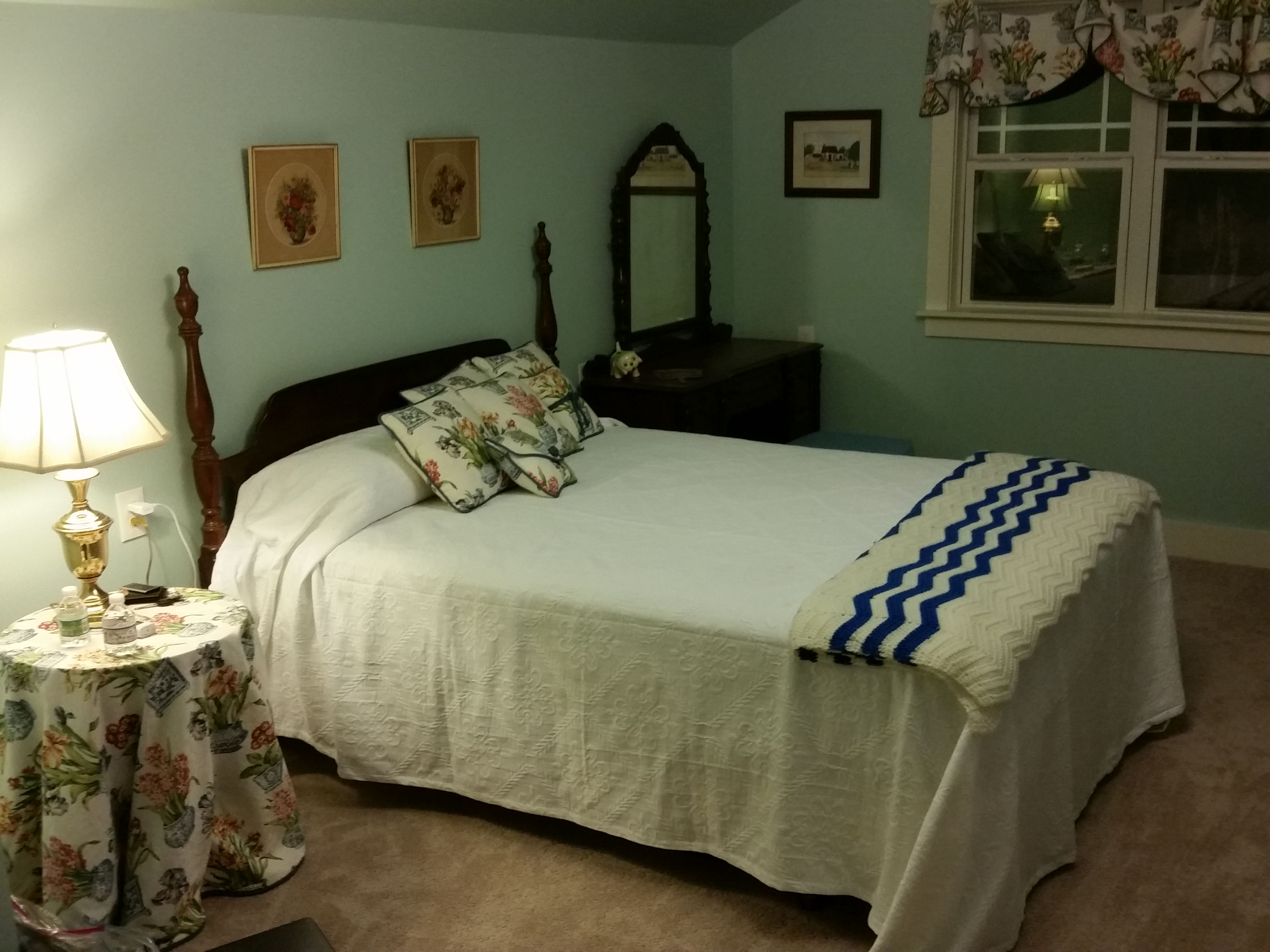 In our email correspondences, my hosts had made it clear that I could use their hospitality for whatever I needed. This morning, I needed to get some writing in. My task was well fueled by a great breakfast made by Jim.

The whole neighborhood came over for lunch: Jim and Susan’s son, Matt, along with his wife, Lisa and their children Malia and Michael. Lisa’s parents, Carl and Ely, also live just up the road. Considering that none of them had burned down each other’s houses, I have to assume that the family dynamics among them are pretty solid. 🙂

As the meal was served, I found myself turning into my father: 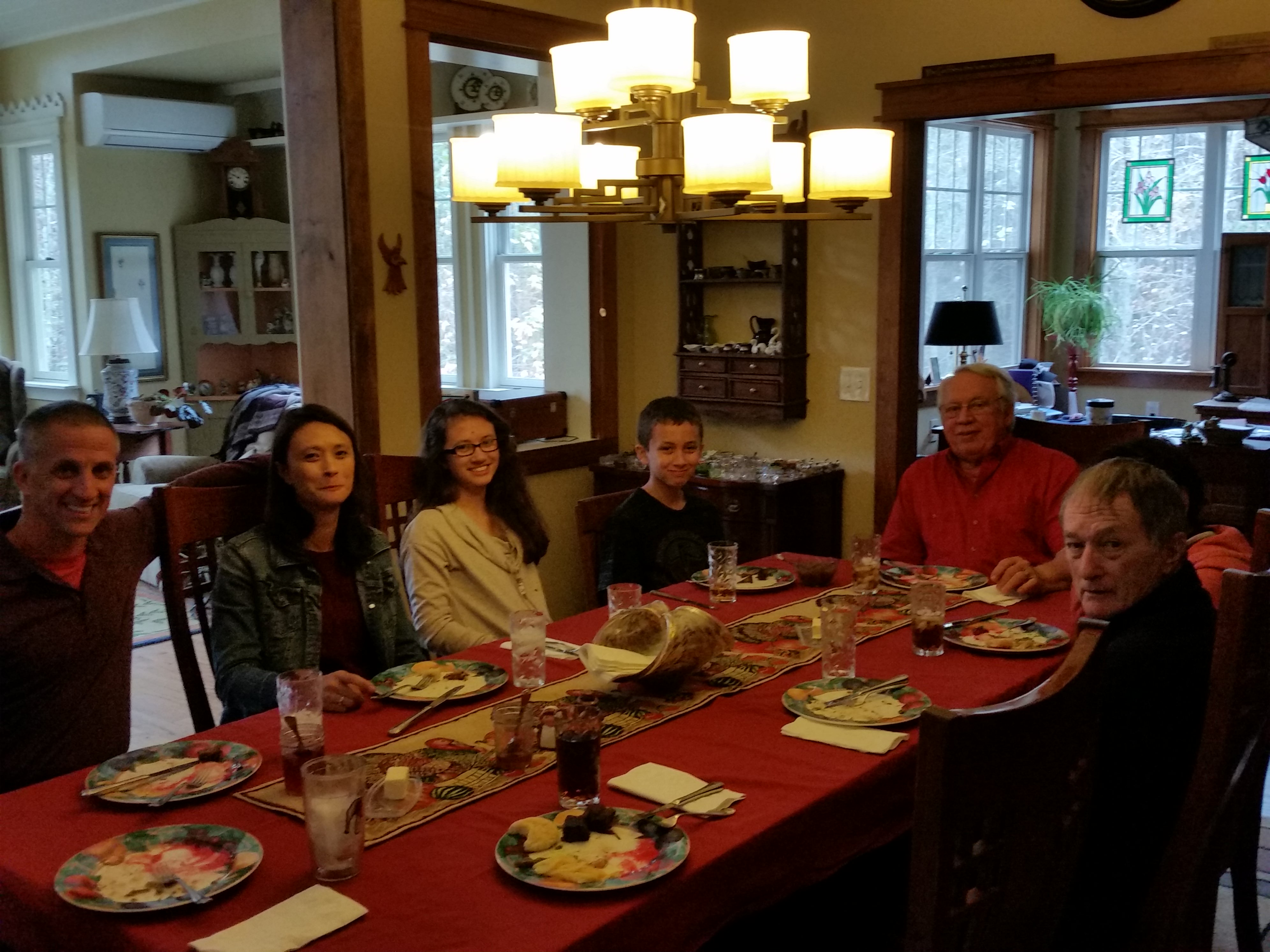 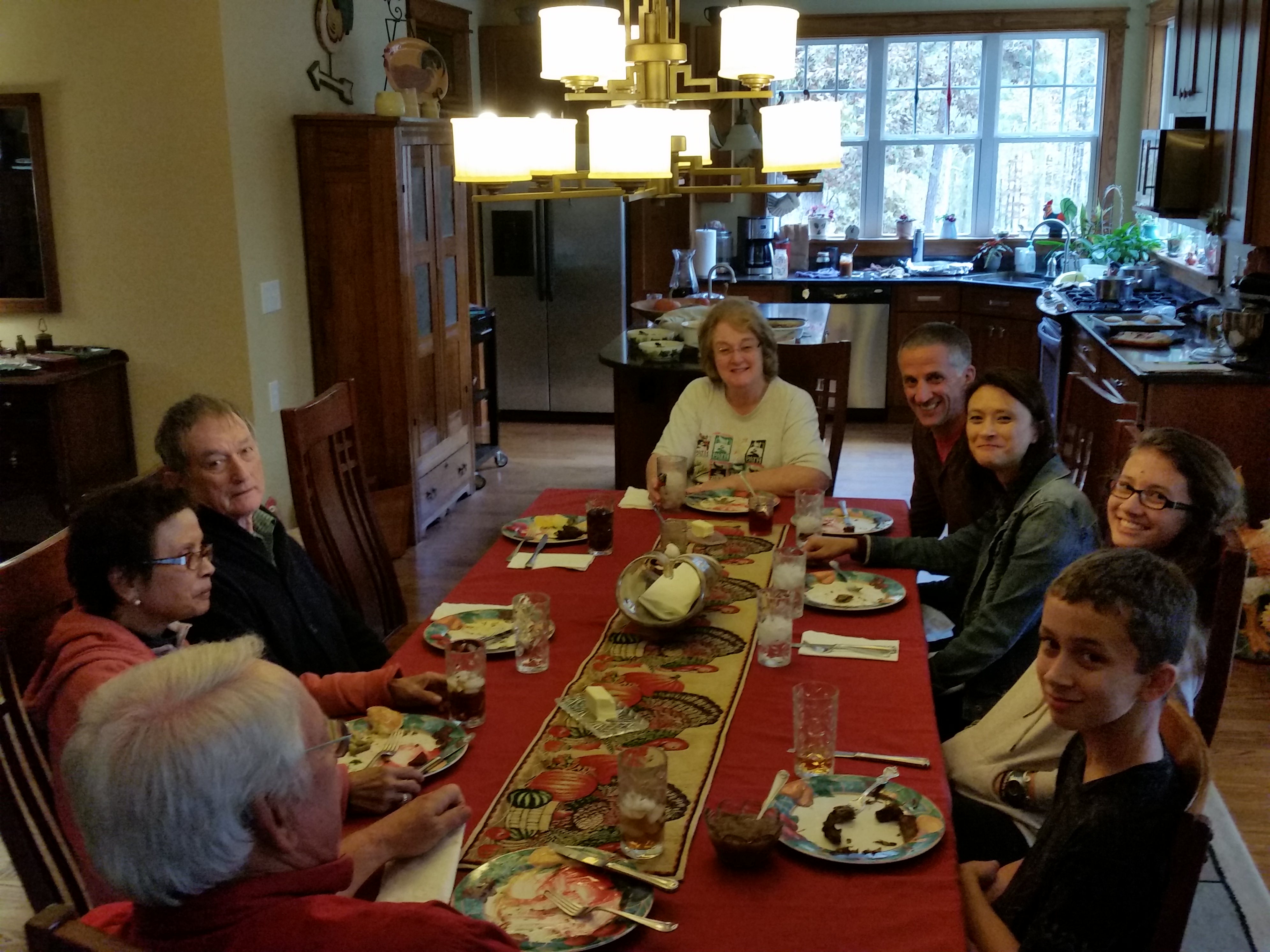 They were all such wonderful people: Easy to talk to and totally accepting of this disheveled stranger.

We did some Annie tattoos and Susan got some good pictures. 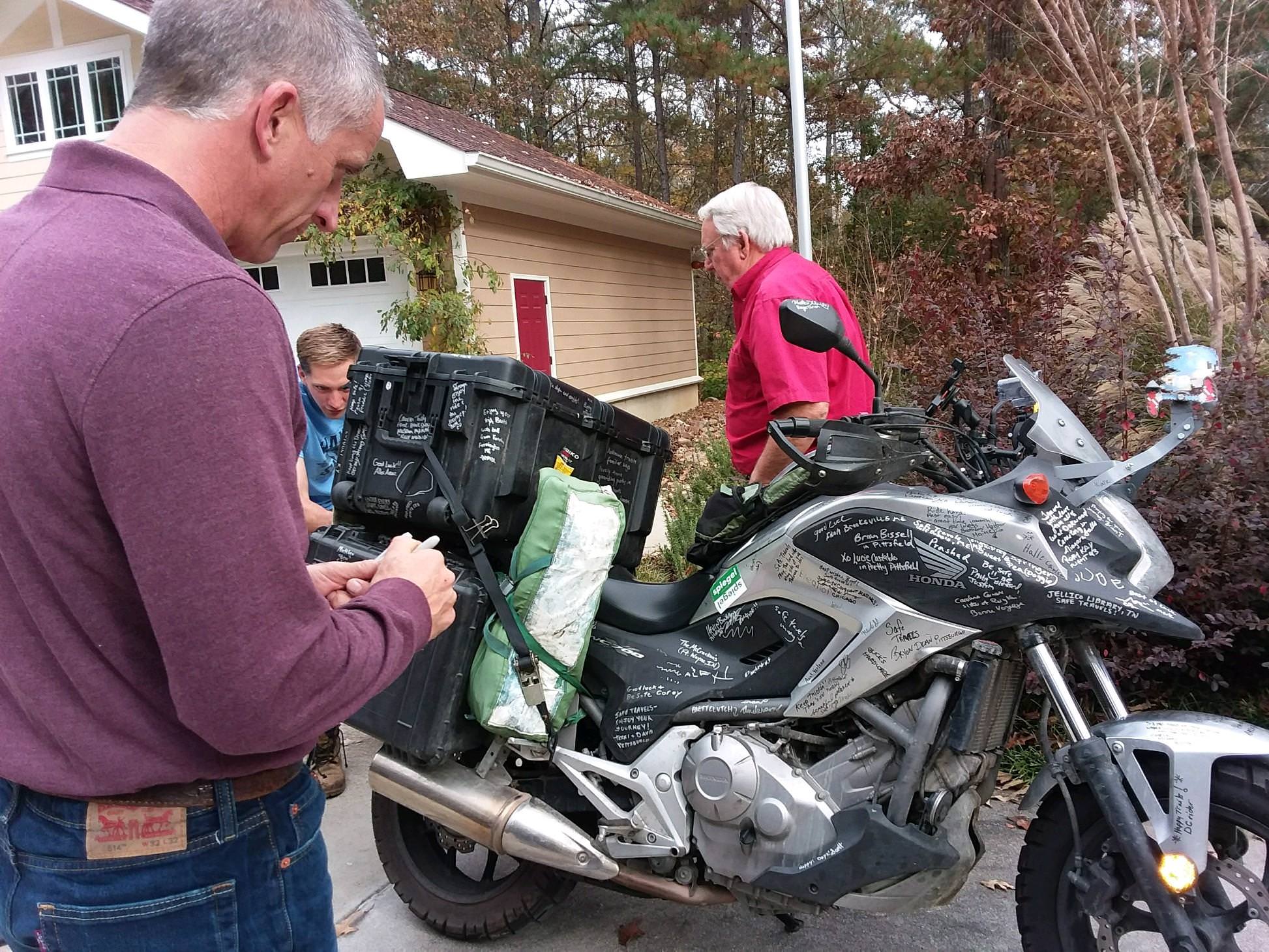 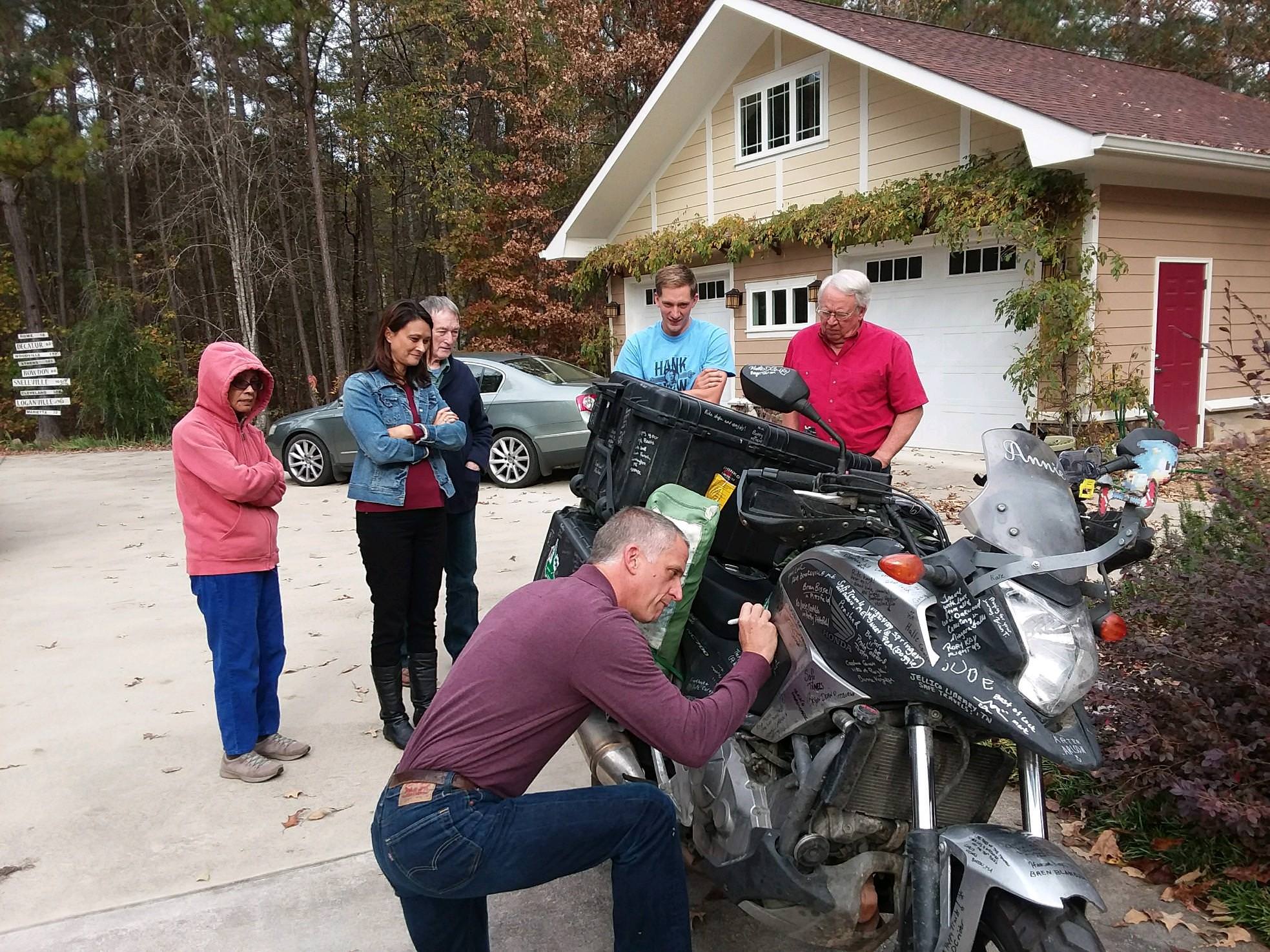 This picture is so candid. I love it: 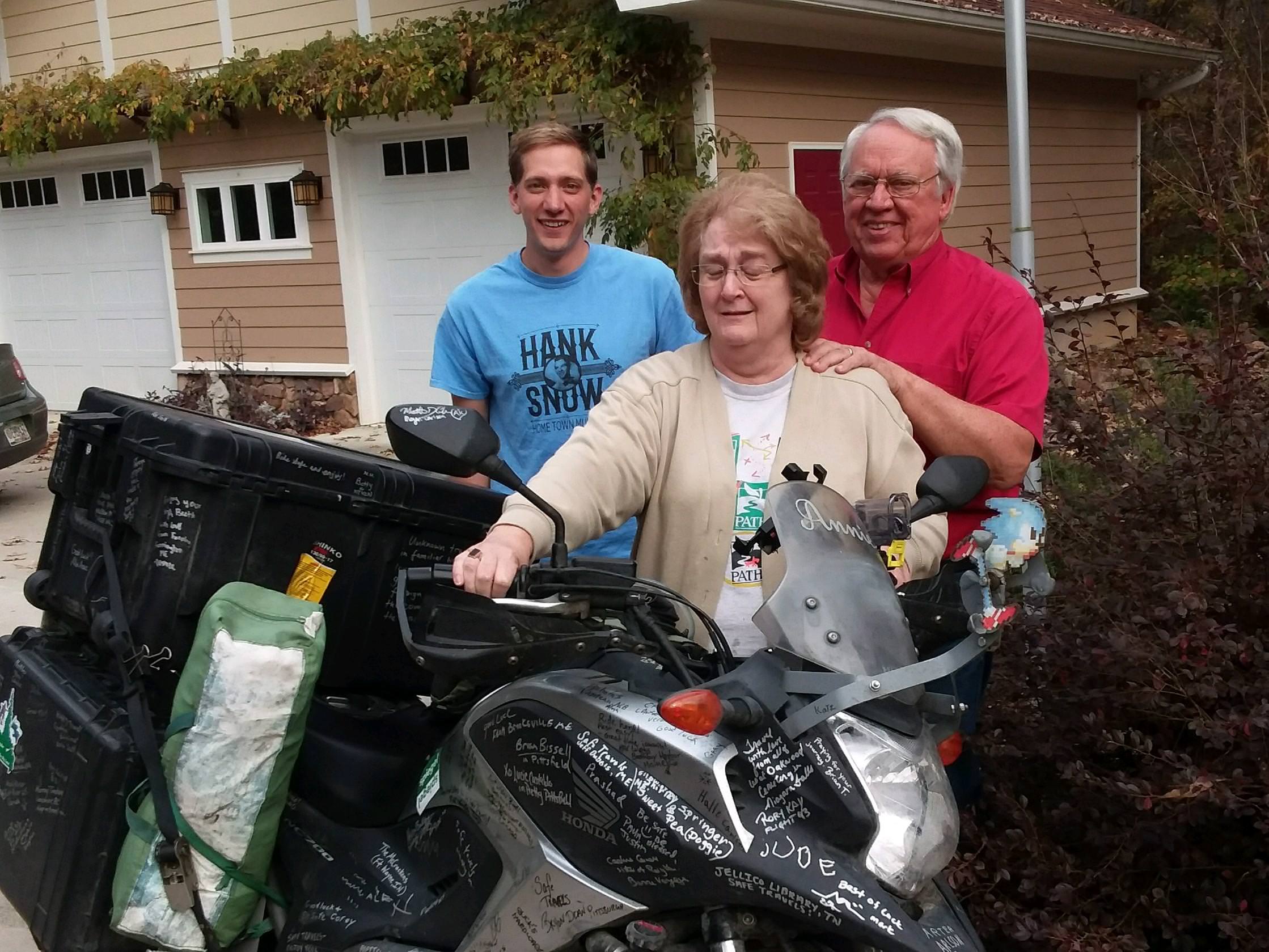 Jim took me on a nice tour of Rome and Berry College, including the amazing Old Mill. 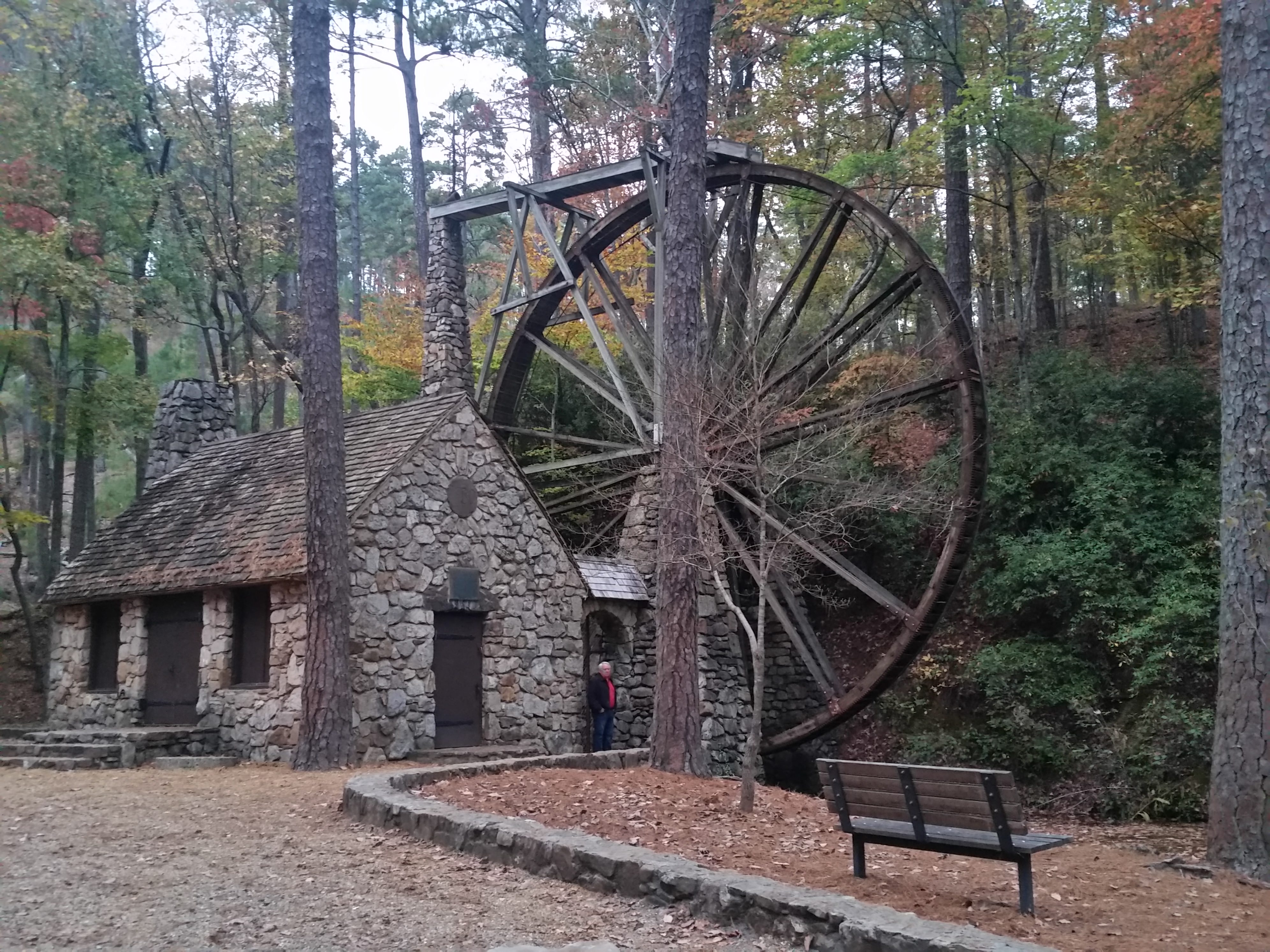 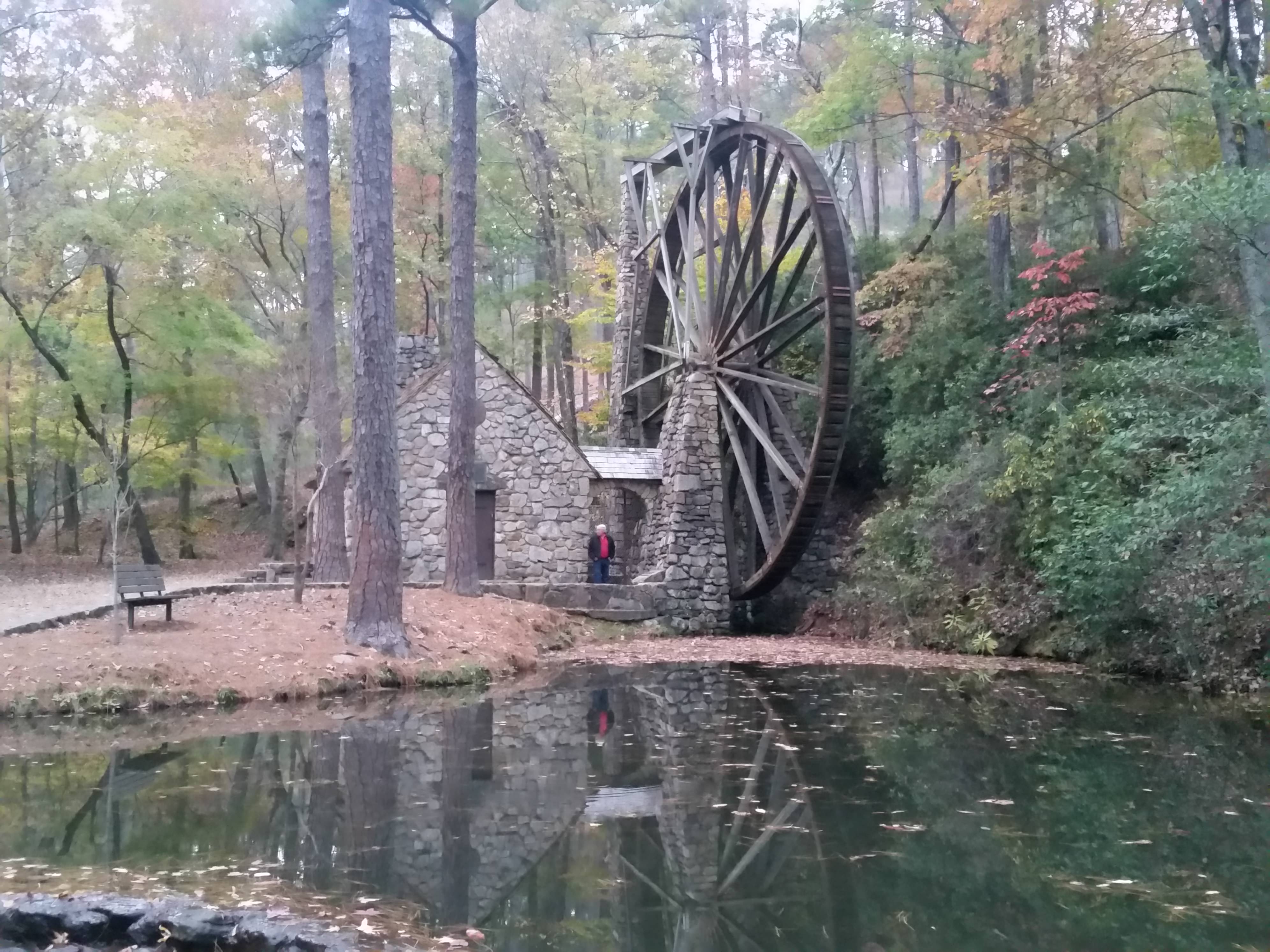 I had so many wonderful conversations with Jim and Susan during this day. They really made me feel like I was part of their family.

I lingered a little longer than I planned with my hosts (this is sort of becoming a theme). I had plans for the evening, but due to a bit of a miscommunication, I had to rush a bit more than I would have preferred.

It was hard to say goodbye to Jim and Susan. With how I was treated by them, I definitely could have stayed indefinitely. Though I had been there for less than 48 hours, I felt that we had a real connection. Next trip, I will have to stay for awhile longer. 🙂 It was well worth the detour to go and see them.

I was going to meet some other characters who were already part of this story. Do you remember these nice people from THIS POST? 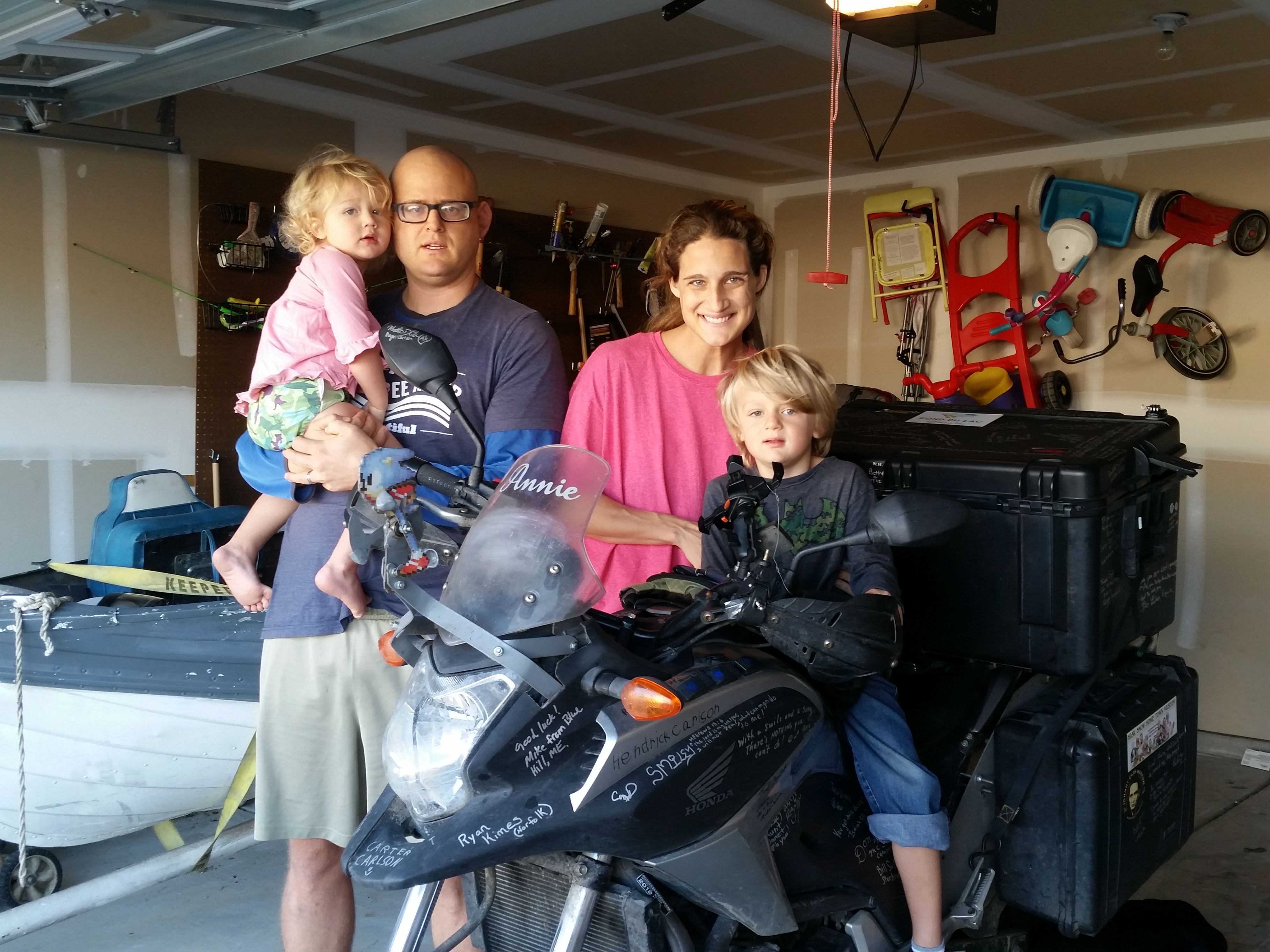 My friend, Brett, and his son, Mays, were on a little camping excursion and we were meeting up at a state park in eastern-central Alabama. Because of my time snafu, I only had about 30 minutes to check out place 49 of 92 on my list: Tallapoosa, GA. I absolutely despise rushing through song places, but I had no other options. Thankfully, I was able to pack a surprising amount of experiences into this brief window.

A quick note on “Tallapoosa.” This place is a river, a town in Georgia and a county in Alabama. I was originally planning on visiting the county in AL, but decided on the town in GA instead. Had I had sufficient time, I probably would have done both. Additionally our camping spot was on Lake Martin, which was created by damming the Tallapoosa River.

I guess here is the approximate route:

My first stop in Tallapoosa was at a memorial park, which Susan had recommended to me. They have a monument dedicated to the September, 11th attacks, which displays a piece of the twin towers. 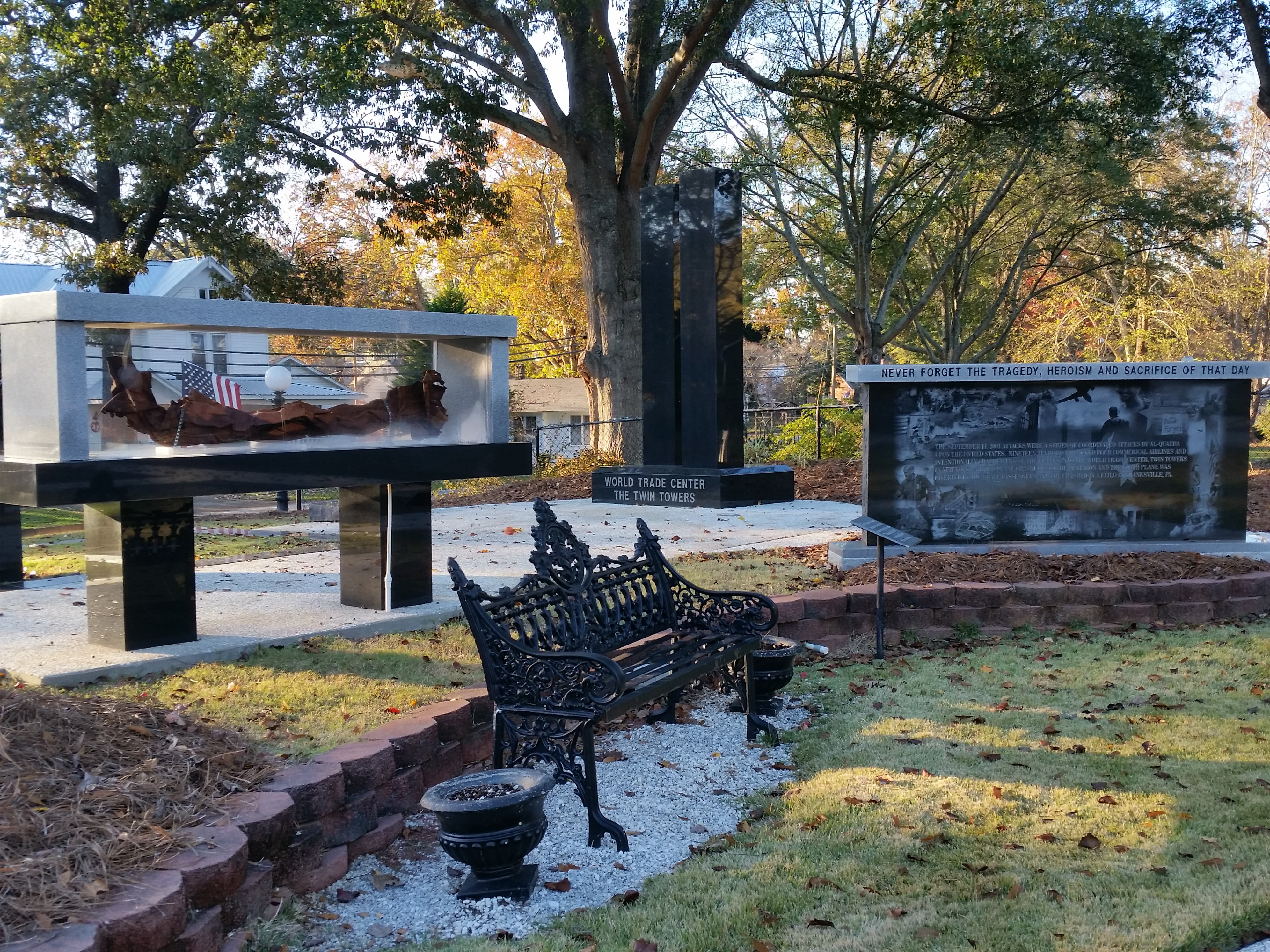 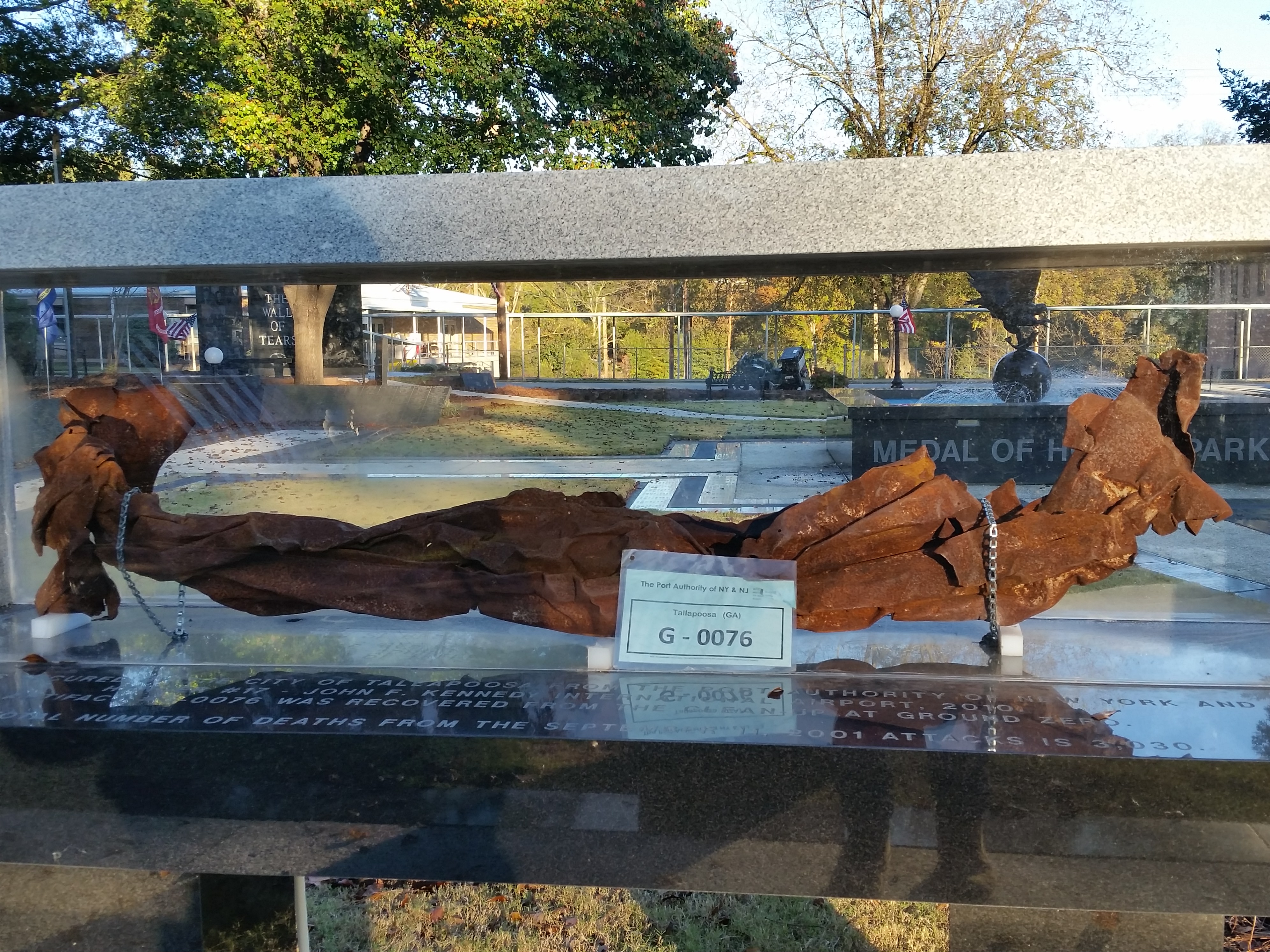 A couple of ladies and some kids were also walking around the grounds. They approached me and ask me if I was from “around here.” After my response, they gifted me a painted rock. 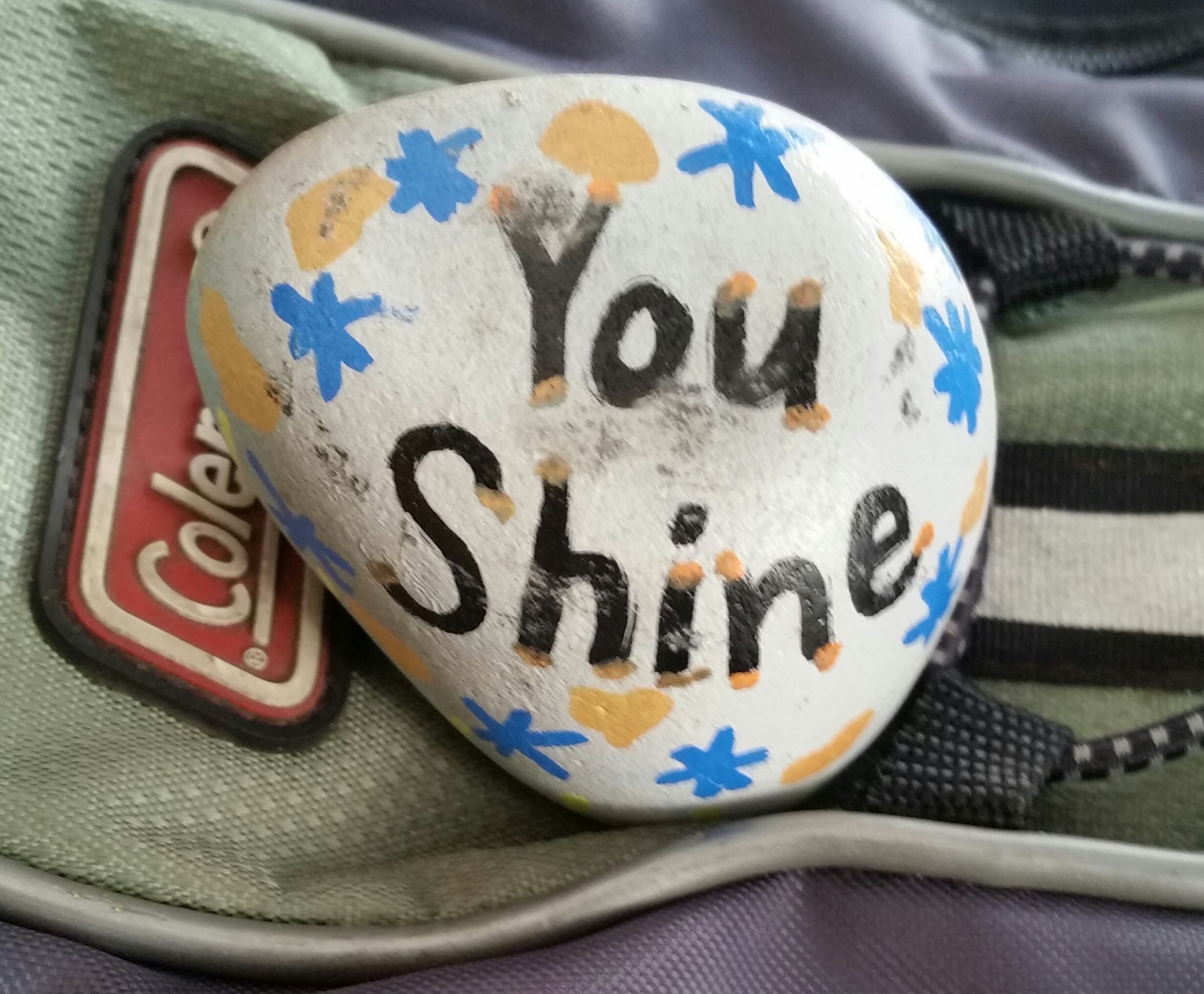 They said it was a fun little town tradition to hide and find them. What a nice gift!

I thought the old main street buildings would be a good place for my picture to represent Tallapoosa. As I was setting up my tripod, a man came out of the nearby bar and engaged me in conversation. This is how I met Dan.

Dan told me a lot about Tallapoosa, including that Johnny Cash used to drink in the bar which he had just exited. Though he did digress briefly to tell me about his terribly inappropriate Halloween costume, I also got some good historical tidbits about the town. 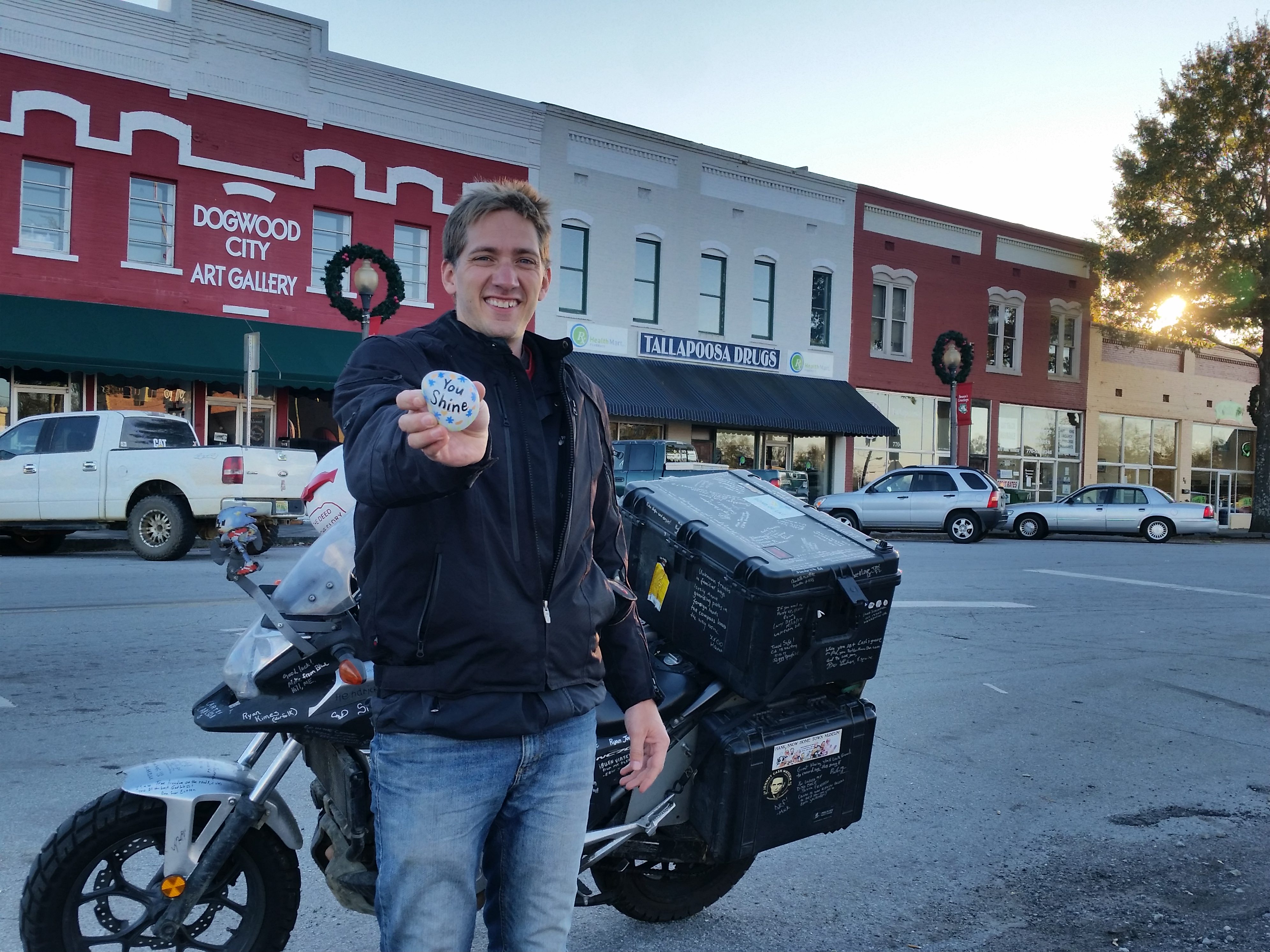 The original name of the town was “Possum Snout,” but residents here decided that “Tallapoosa” was more palatable. I’m not sure if there was a referendum held on this issue, but it is easy to imagine voters feeling like they were in a “lesser of two evils” situation.

Dan directed me to the sign on the north side of town, which still had “Possum Snout” on it, though buried by foliage a bit. 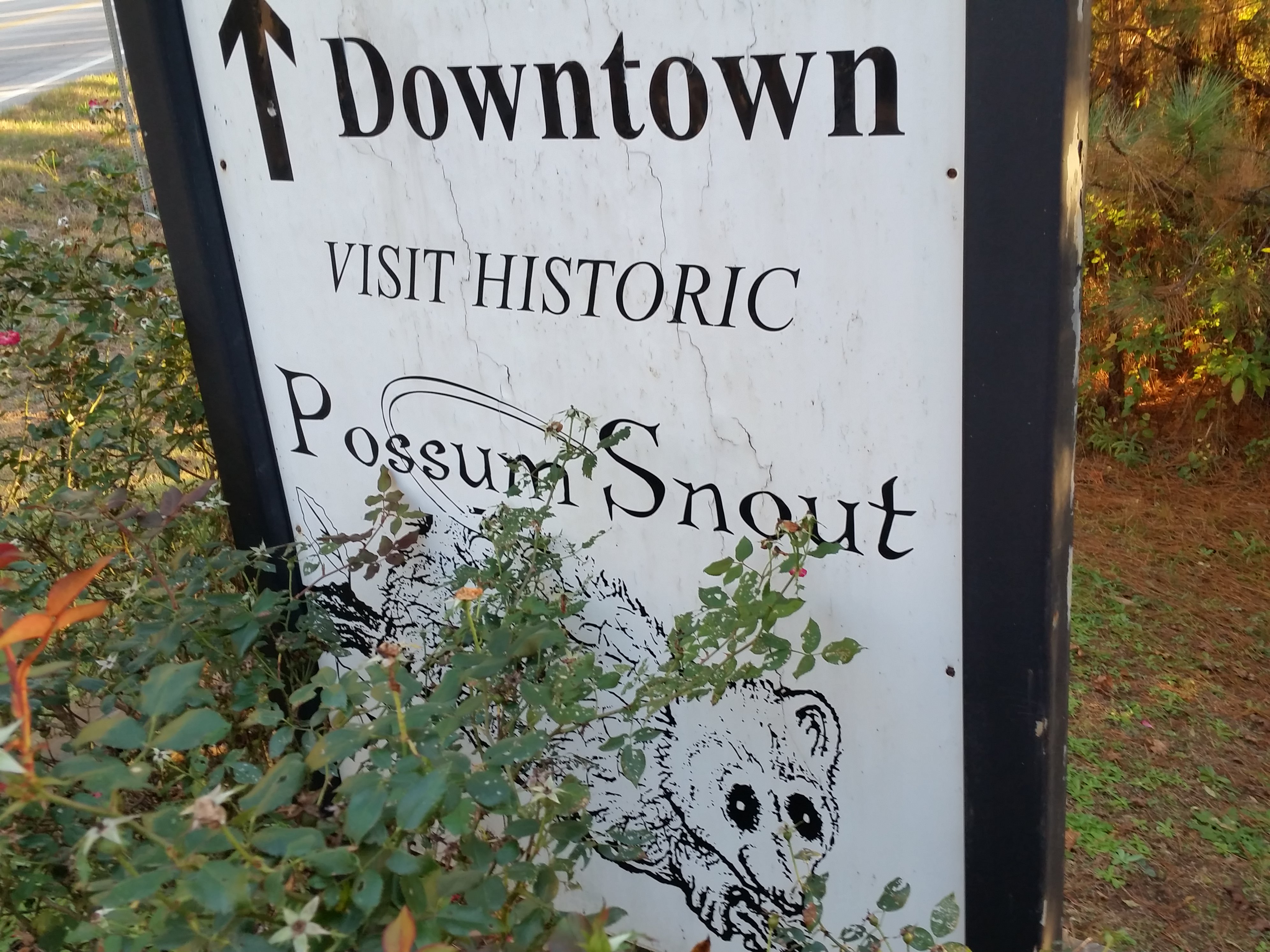 We have been to Tallapoosa! 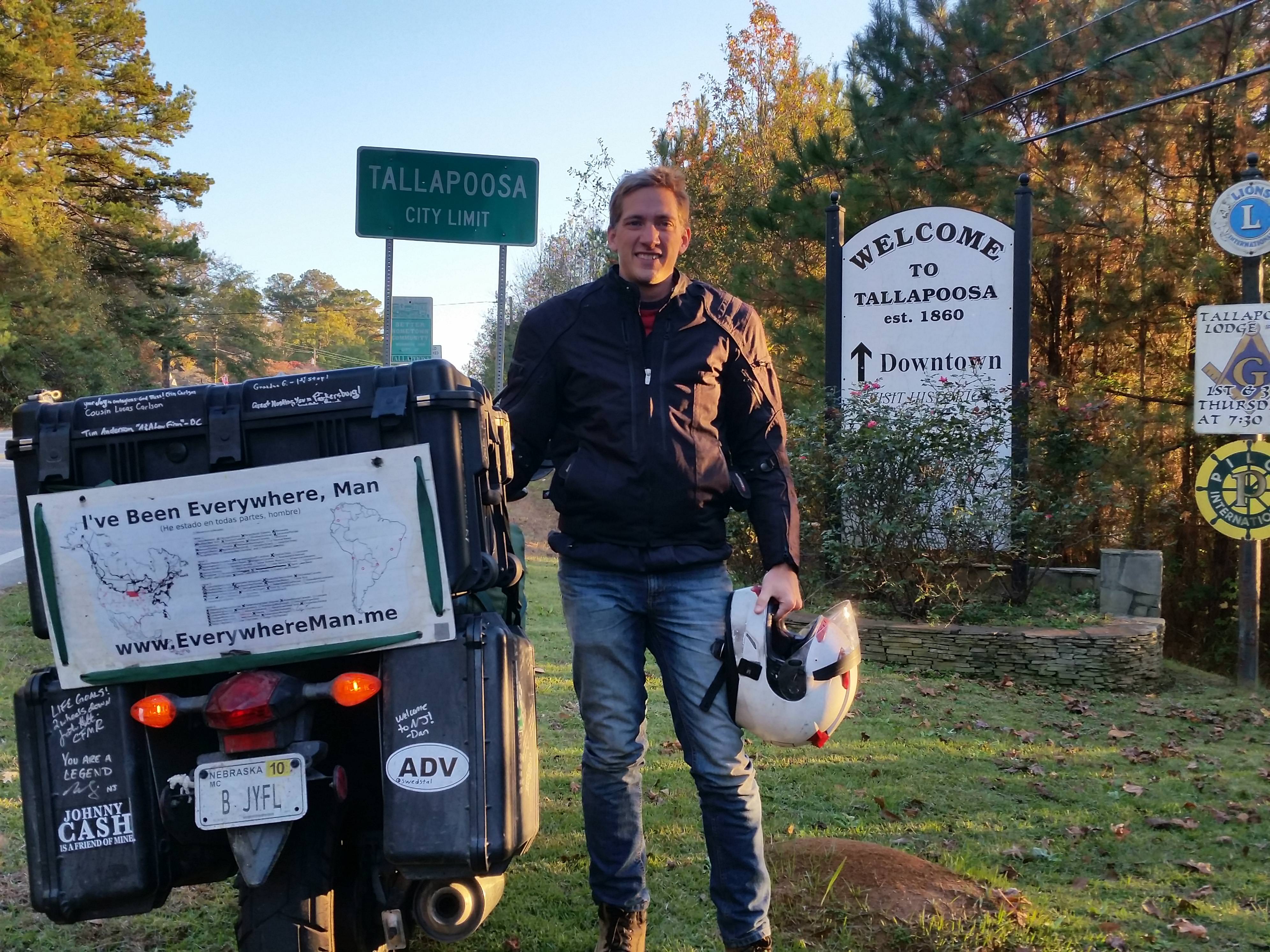 I had to do some more darkness riding to get to Wind Creek State Park. I crossed over the final time zone line of this loop, returning to CST. I followed Brett and Mays to their campsite. Being that it was a Monday in November, the place was nearly deserted.

We had a wonderful, simple evening. Mays did some painting, placing an equal amount of pigment on the paper, the table and his pants. 🙂 He also cooked me some hotdogs. I came to the realization that although I have slept in a tent for dozens of nights over the last few months, I have not really been “camping.” It was a nice break to be using the outdoors for recreation purposes.

Let me show you the dance of my people: 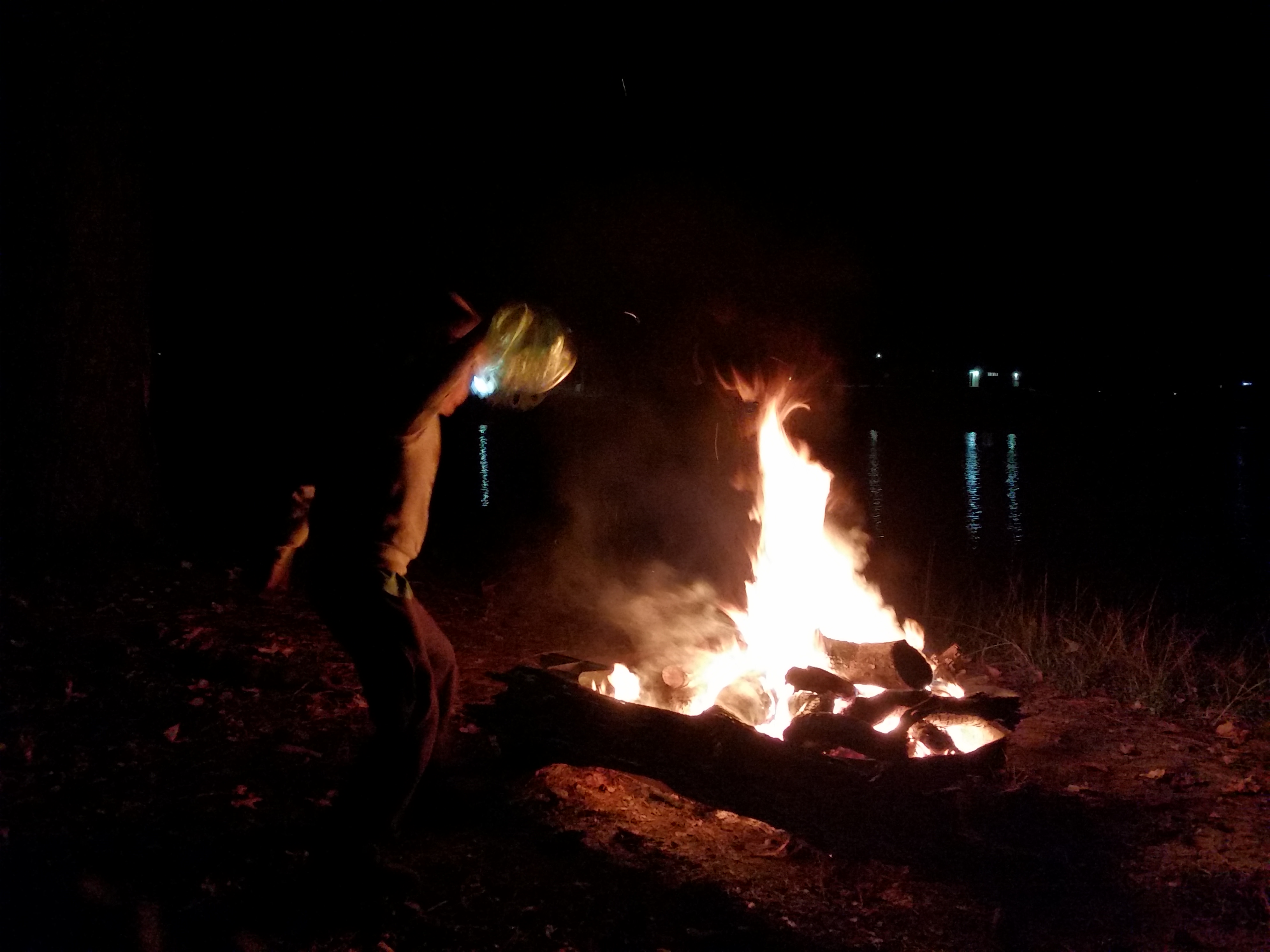 The night was chilly, but I slept well. The dawn hours were beautiful. 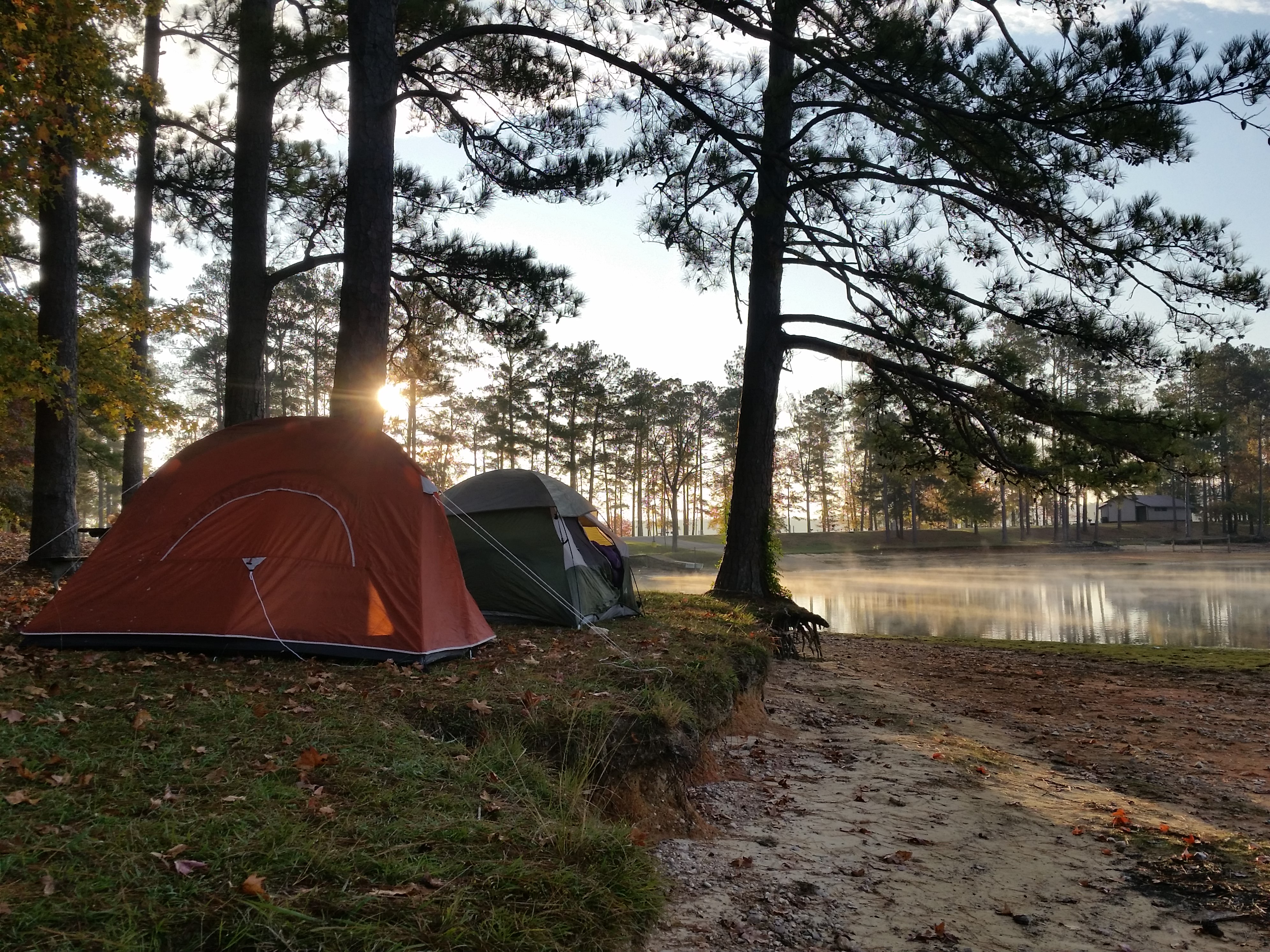 We had some coffee and Mays did some fishing. 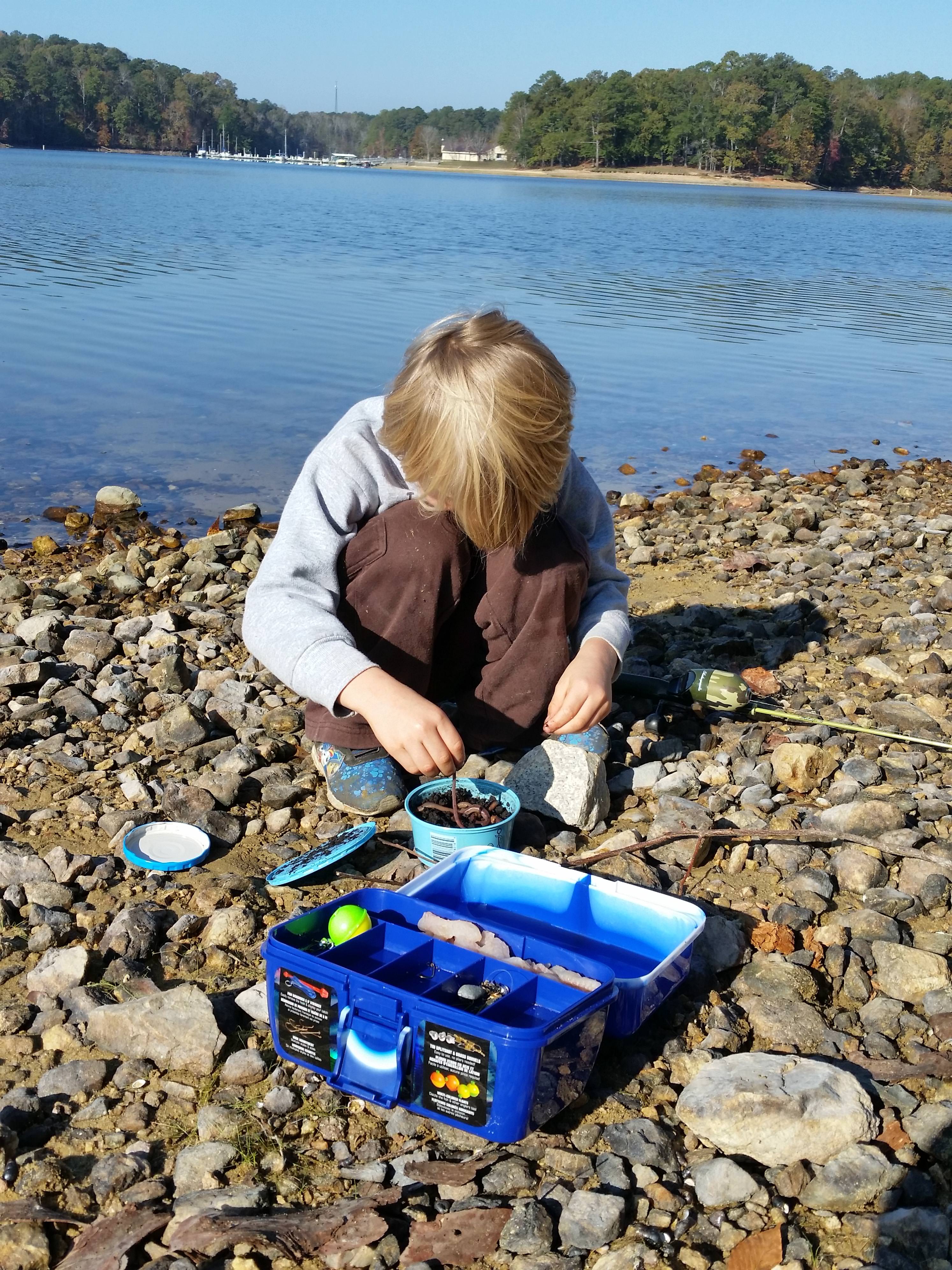 Camping with the @everywhere.man (and sporting his helmet)

The following picture represents the mentality with which I still ride: 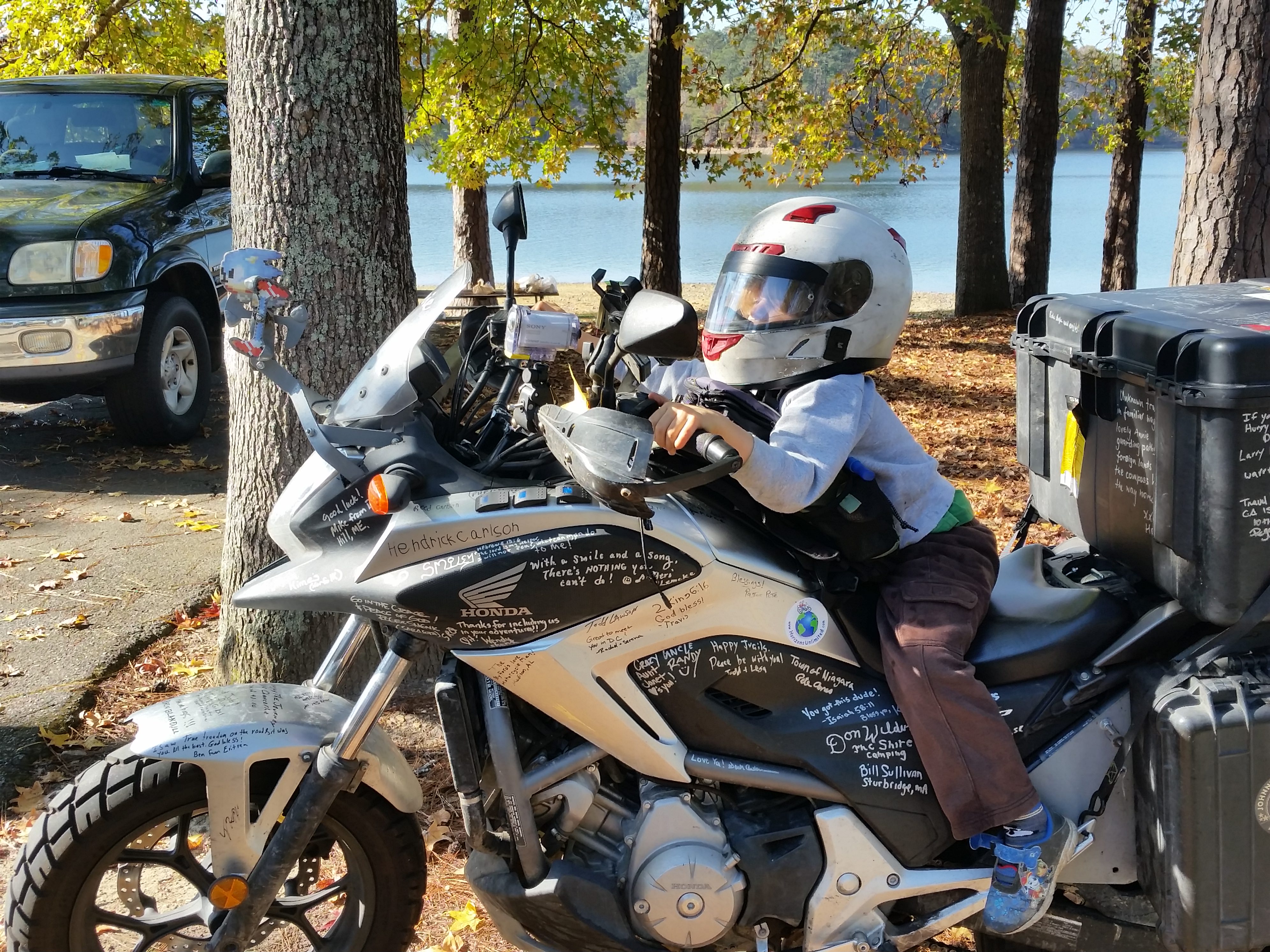 It was a real treat to be able to connect with them for a second time on my journey. There is something strangely rejuvenating about being around people who are familiar, especially people who are just generally awesome. 🙂

As this journey progresses, it will be interesting to see if there are any other people who will make additional appearances. Though sequels often fall short of the splendor of the original, these connections were splendid and special.