Just in case my singing didn’t scare everyone away yesterday, let’s try another post. In this one, you will see that I’m just in it for the money. 🙂

As if a genie had just stopped by, I was granted three wishes: 1. Permission to camp on the museum grounds. 2. The door code to access the museum rest room. 3. The wifi password. Talk about an abundance of riches.

Slowly, the grounds around the museum were cleaned up and one by one everybody left. Only I remained. It was sort of an odd feeling, given how bustling it had been just a couple of hours earlier. I set up way back in a secluded corner, far from the museum itself. 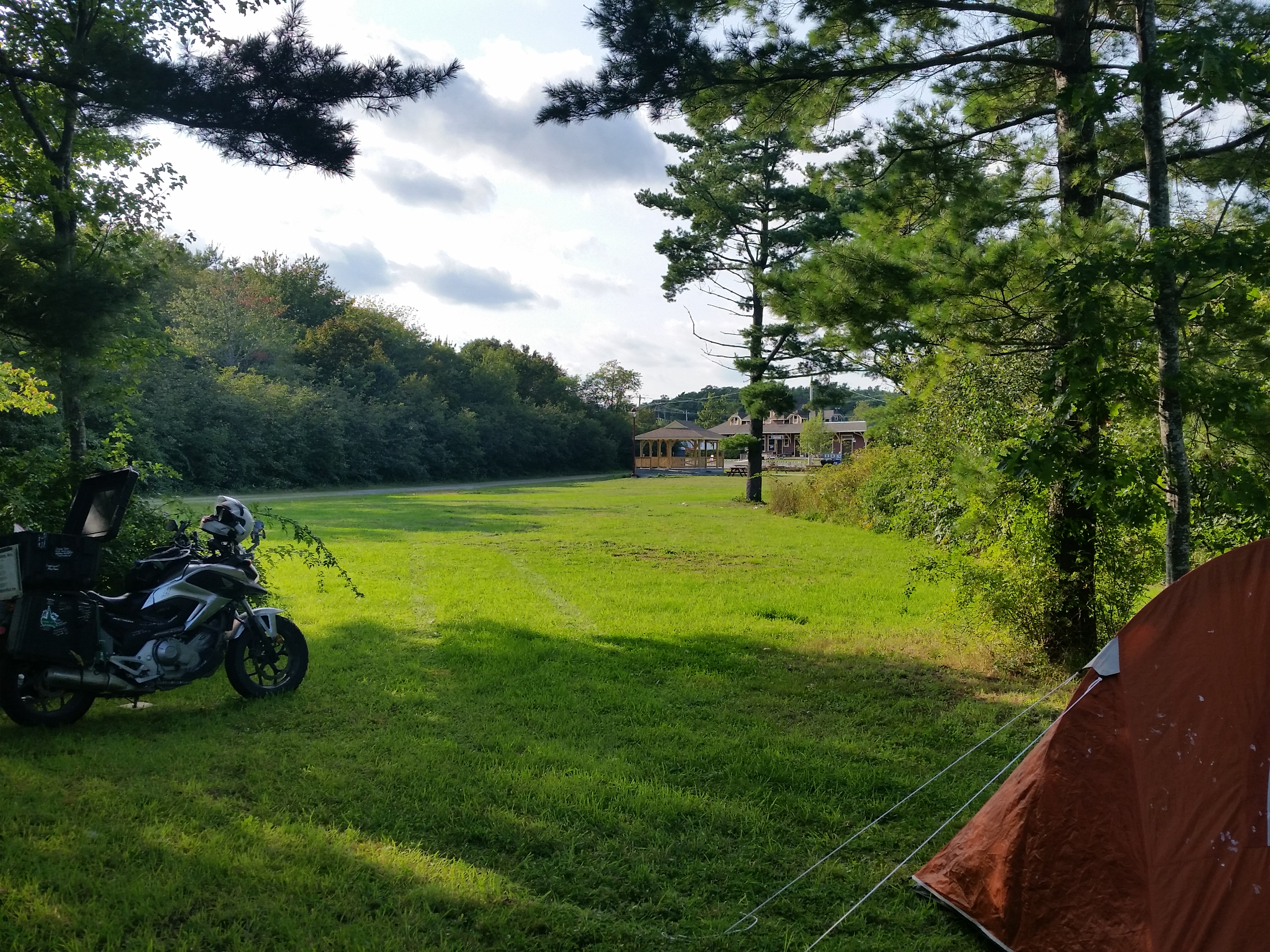 Looking over Hank’s shoulder, towards my tent. 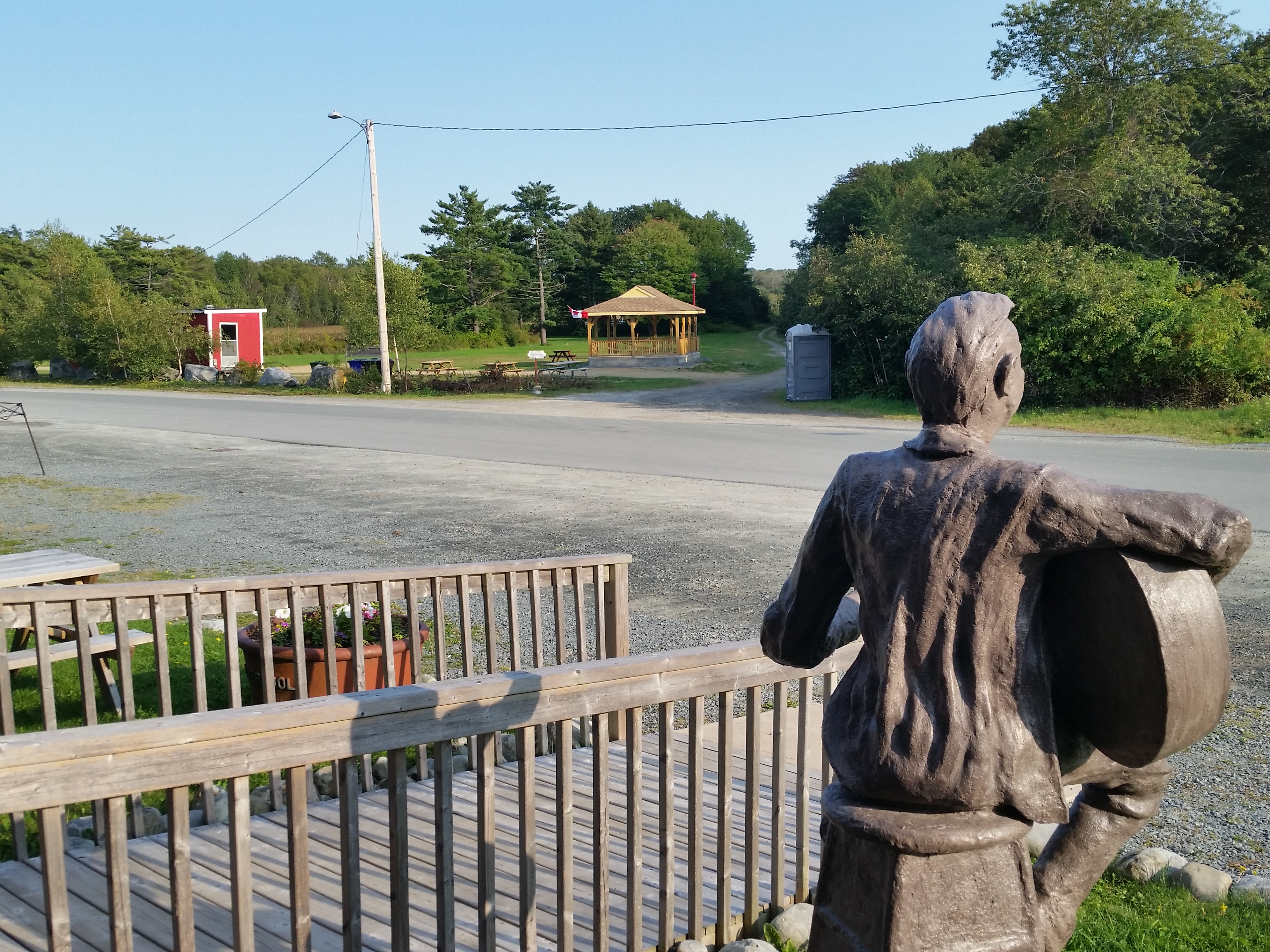 I took this as an opportunity to get some good pictures around the museum. 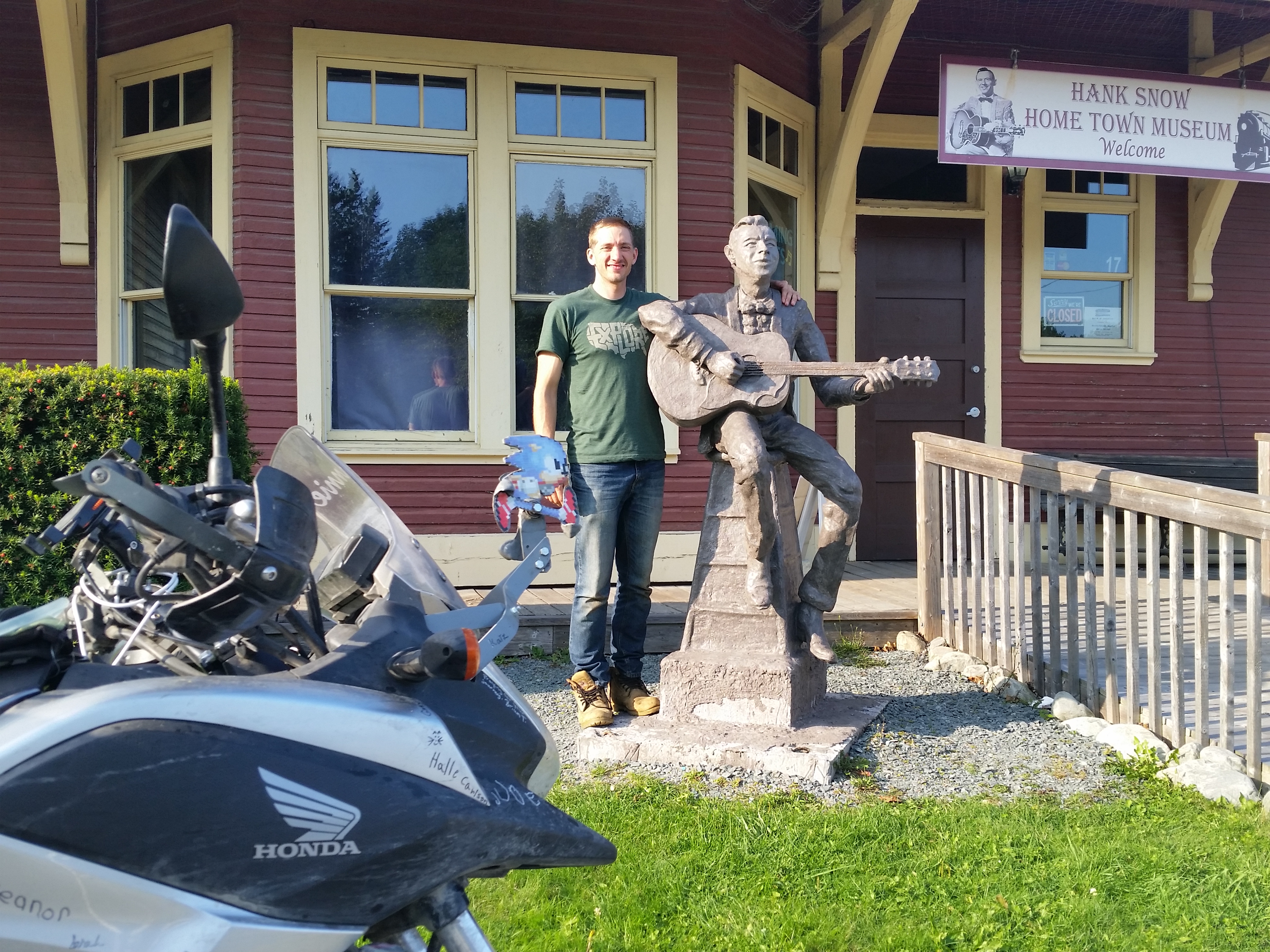 Though this statue may look a little less than lifesize, I was told that it is fairly close to Hank’s actual dimensions. He did not fit the mold of a big, burly country singer. 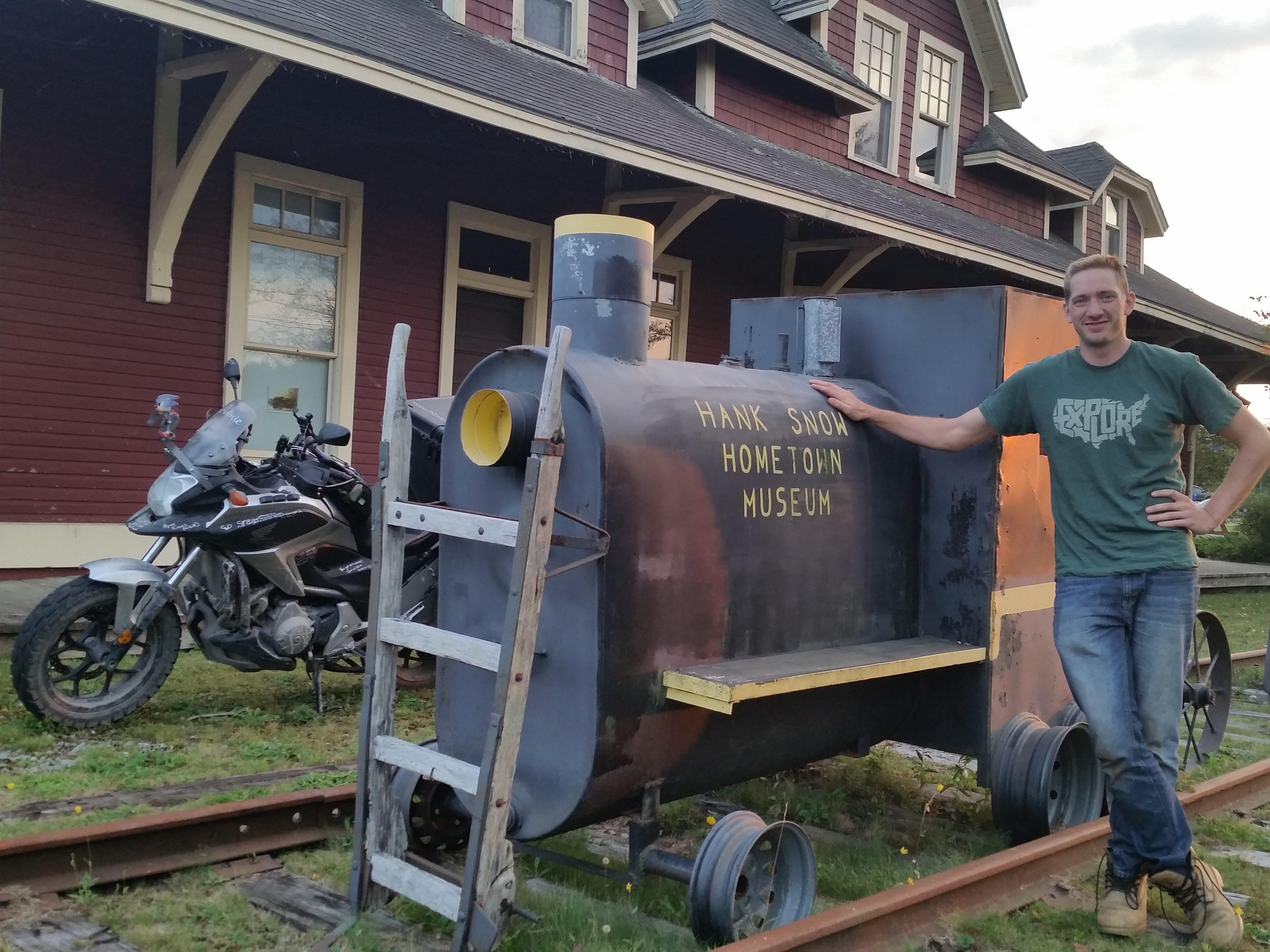 The wifi was quite fast, but I only had a solid connection if I cozied up to a window on the backside of the museum. I spent a lot of time working here. 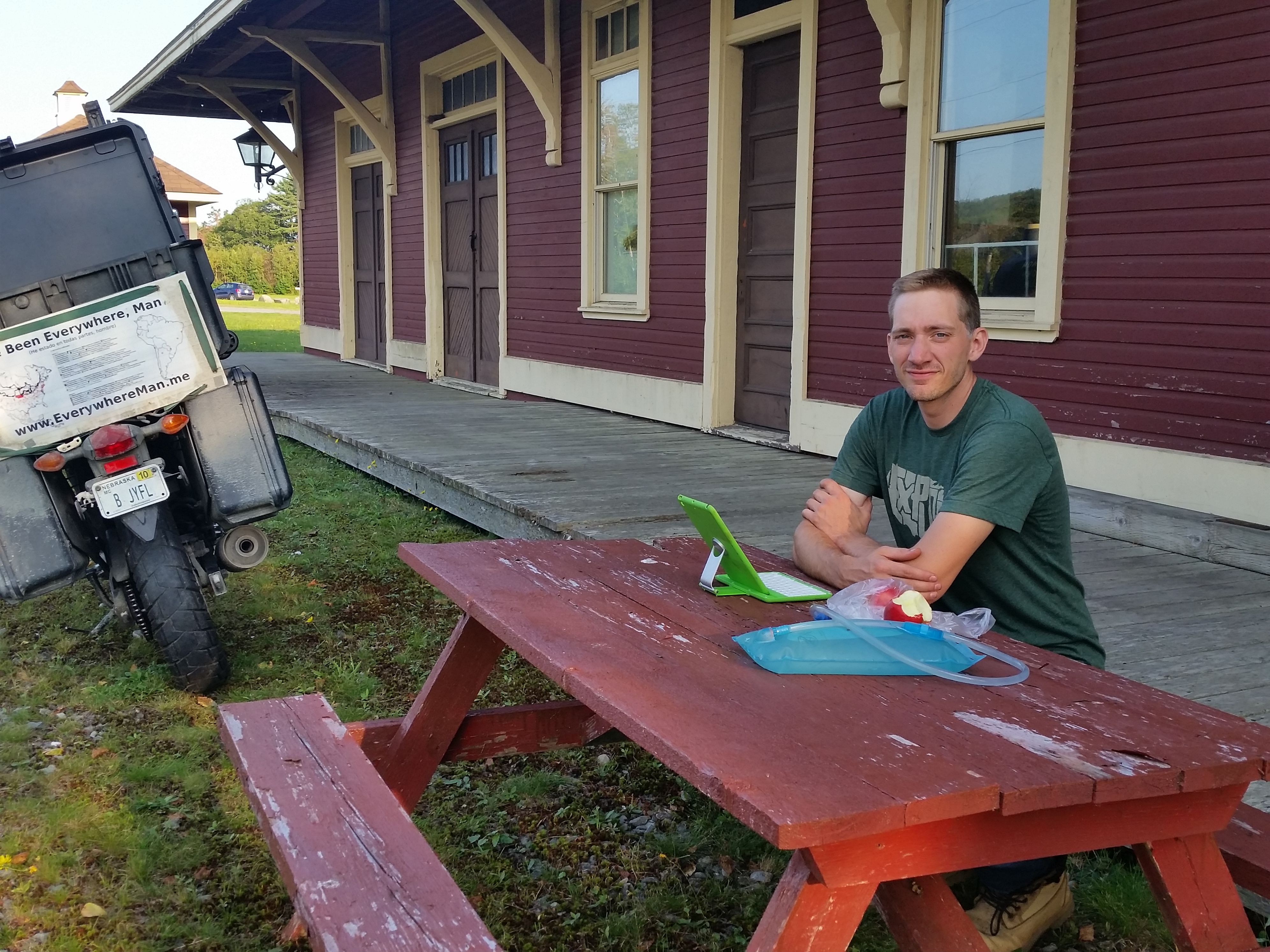 I had a peaceful, serene night. A stark contrast to my first night in Nova Scotia.

It was a drizzly morning, but that did not bother me too much. I knew I had a lot of work to get done, so I had decided that I would leave my tent set up and stay another night. Believe it or not, this was the first time on the trip that I had tented in the same spot for consecutive days.

I returned to my wifi window at the museum and resumed my work. I was a bit surprised when a gentleman rounded the corner with a camera in hand. I explained briefly that I was camping here and had permission to be on the grounds. He simply responded with, “Well, I hope you’re not working.”

I began to tell my story. He stopped me politely, saying, “Hold on, I need to go get my wife. She’s gotta here this”

That’s how I met Jim and Susan check from Georgia. They were the first Americans I had talked to in 11 days, since meeting the New York/German/Bangladesh couple in Kingston, Ontario.

They seemed to get a real kick out of my story and I enjoyed talking to them. Our conversation ended with them inviting me to stay with them when I get to Georgia. As Jim was shaking my hand, he passed some folded bills to me. I was hesitant to accept, but there was no way he was taking them back. I merely tried to express my gratitude as best as I could.

After they left, I unfolded the bills to find that he had passed me $60 (equivalent to 973 miles of gas). Water began to well in my eyes. No, not because Canadian money is so hideous, I was truly moved by the gesture. In some ways, I feel kind of unworthy of this sort of support.

A couple of weeks ago, a friend on Facebook asked if there was a way to donate to my cause. I merely thanked them but said I was not looking for financial support. I’ve had other people ask if I have a gofundme account or anything else like that.

Doing a trip like this should require some sacrifice on my part. I’ve worked hard to save the requisite amount for the this trip and I would not have left my driveway if I thought I had insufficient funds to complete it all.

I don’t really feel like this trip is a cause, per se. It is not raising money or awareness for anything. Accordingly, accepting financial help seems a bit misplaced. Surely there are better places for people to demonstrate benevolence than my foolhardy quest, right? Do I really look that needy? 🙂

I have no plans to start any sort of donation or fundraising page nor to have advertisements on this blog. I have a hard time seeing that happen. For now, I guess the philosophy is thus: If you can put money in my hand, I will take it. Otherwise I will refuse. (Keep in mind that I will be more cautious with whom I shake hands henceforth)  🙂

…but how generous to do something like that to a stranger you just met? Wow.

The museum opened at 1pm. I had an appointment. The email I had sent ahead of my arrival was shared with a few people. One of them was a gentleman named Vernon Oickle. Vernon said that he was a writer, both of books and for the local newspaper. He asked if we could chat for a bit on Sunday.

I was eager to learn more about Hank Snow’s story, so I accepted enthusiastically. His wife, Nancy, was one of the people I had met at the event the previous day. She was working the museum on Sunday as well. 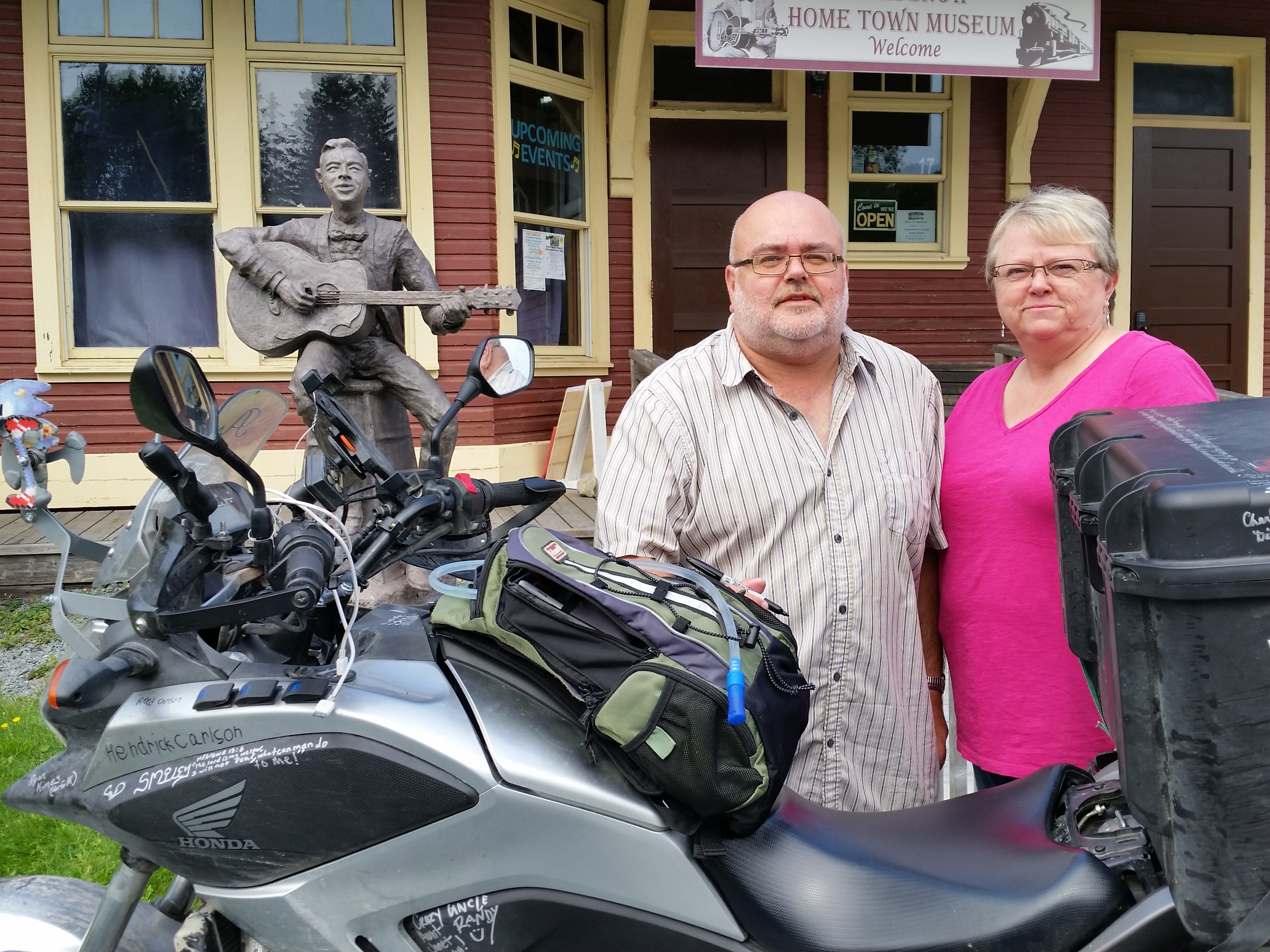 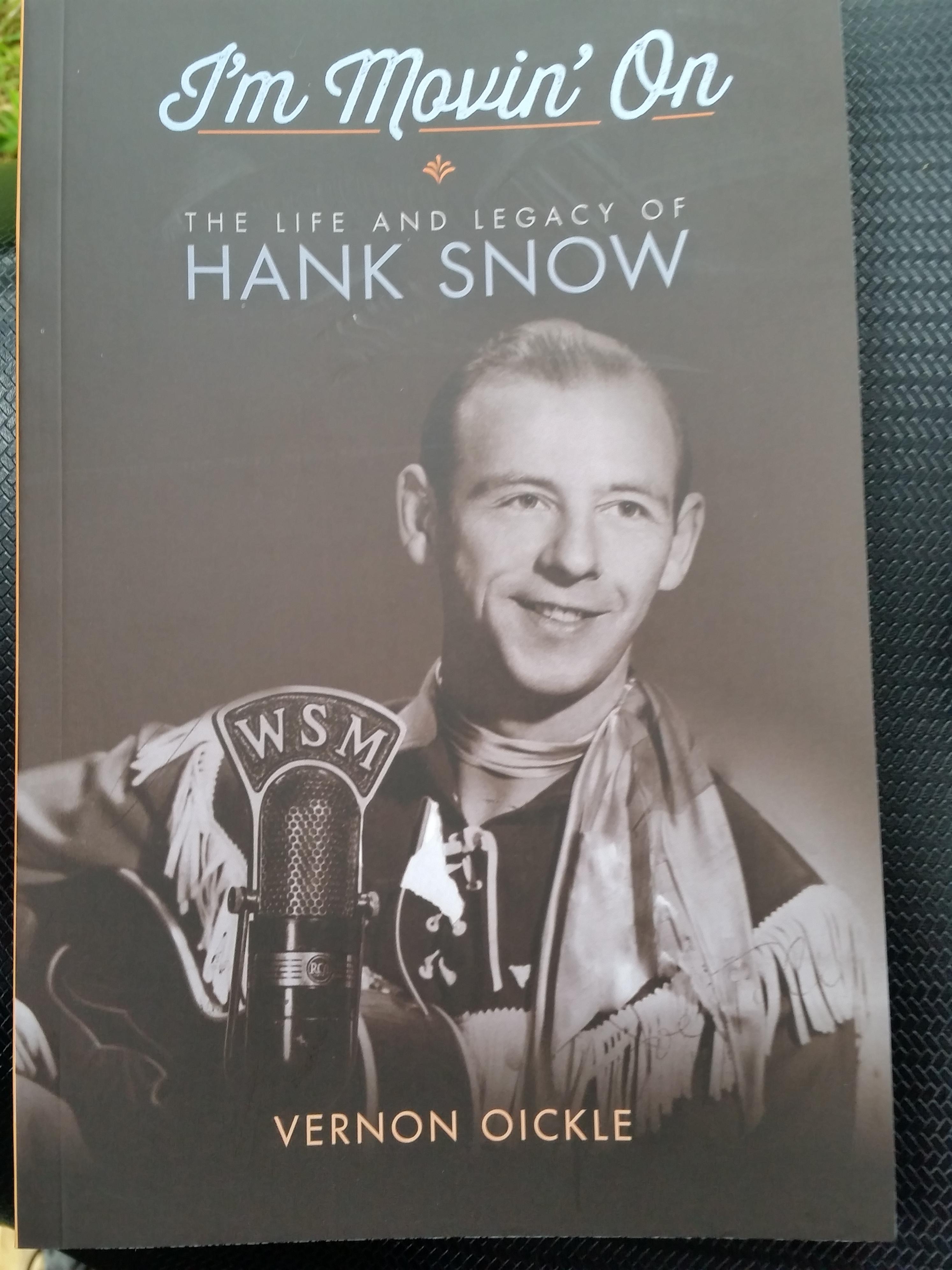 I had asked to purchase a copy as we corresponded over email, but he gave me a signed copy for free.

I enjoyed the interview. He really knew how to ask questions. I answer queries about my trip every day, but he was able to pose questions that I had never heard before. He’s a real pro.

During our chat, Nancy informed me that there was someone downstairs who wanted to talk to me. It was guy named Freddie who I had met the previous day. He saw Annie outside and wondered if the “motorcycle guy” was still around. He shook my hand and wished me good luck. 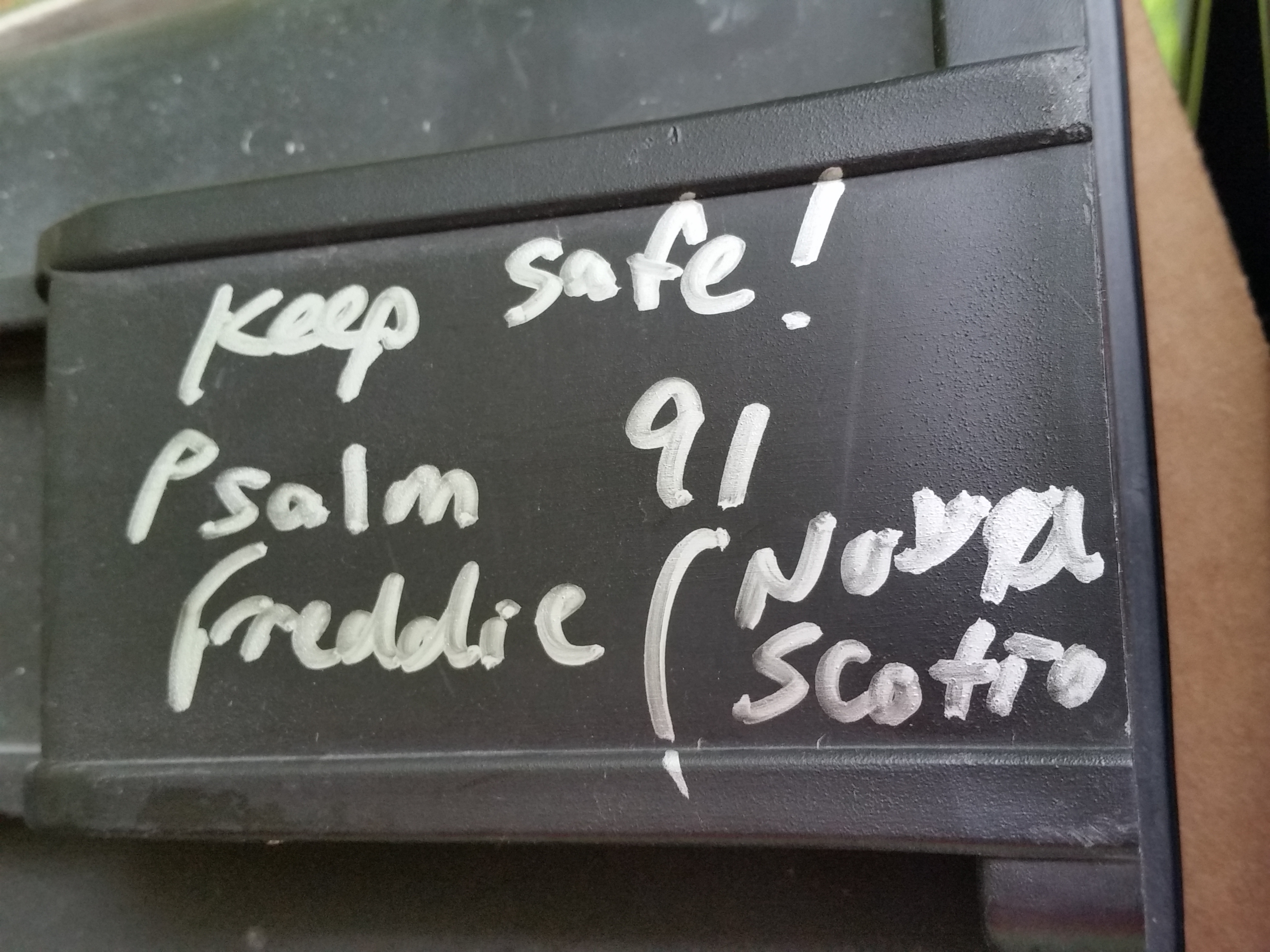 Psalm 91:10 -“No evil shall be allowed to befall you, no plague come near your tent.”

But Freddie was not done yet! About a half hour later he came by again, this time handing me $50 as he shook my hand. I told him I would not waste it! Again, what generosity.

One of the biggest questions I had for Vernon was regarding the song about which this trip is based. Regarding the selection of the places in the song, this is the story that I had heard: The places were selected by Geoff Mack, the original composer of the Australian (first) version of the song. He requested an American (North and South, apparently) atlas and chose places to fit the song structure. The song was then given to Hank Snow.

Vernon confirmed this was the story with which he was most familiar. A couple of other people who knew some Hank Snow history had also confirmed this the previous day.

After chatting we went out for a drive to see some Hank Snow sites and to learn some history about the area. As Vernon drove, I think I almost yelled at him to stop. What would posses me to do that…. 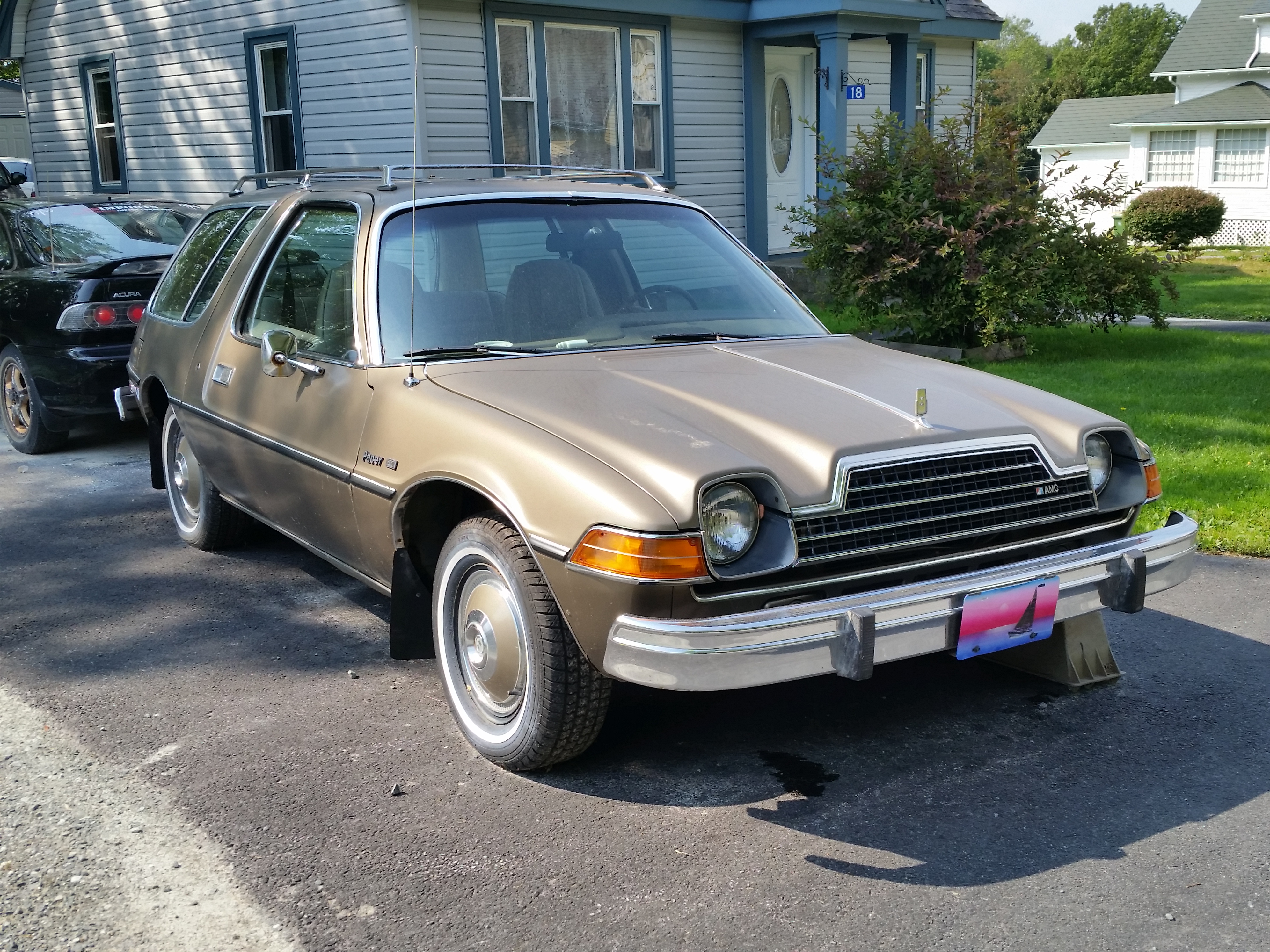 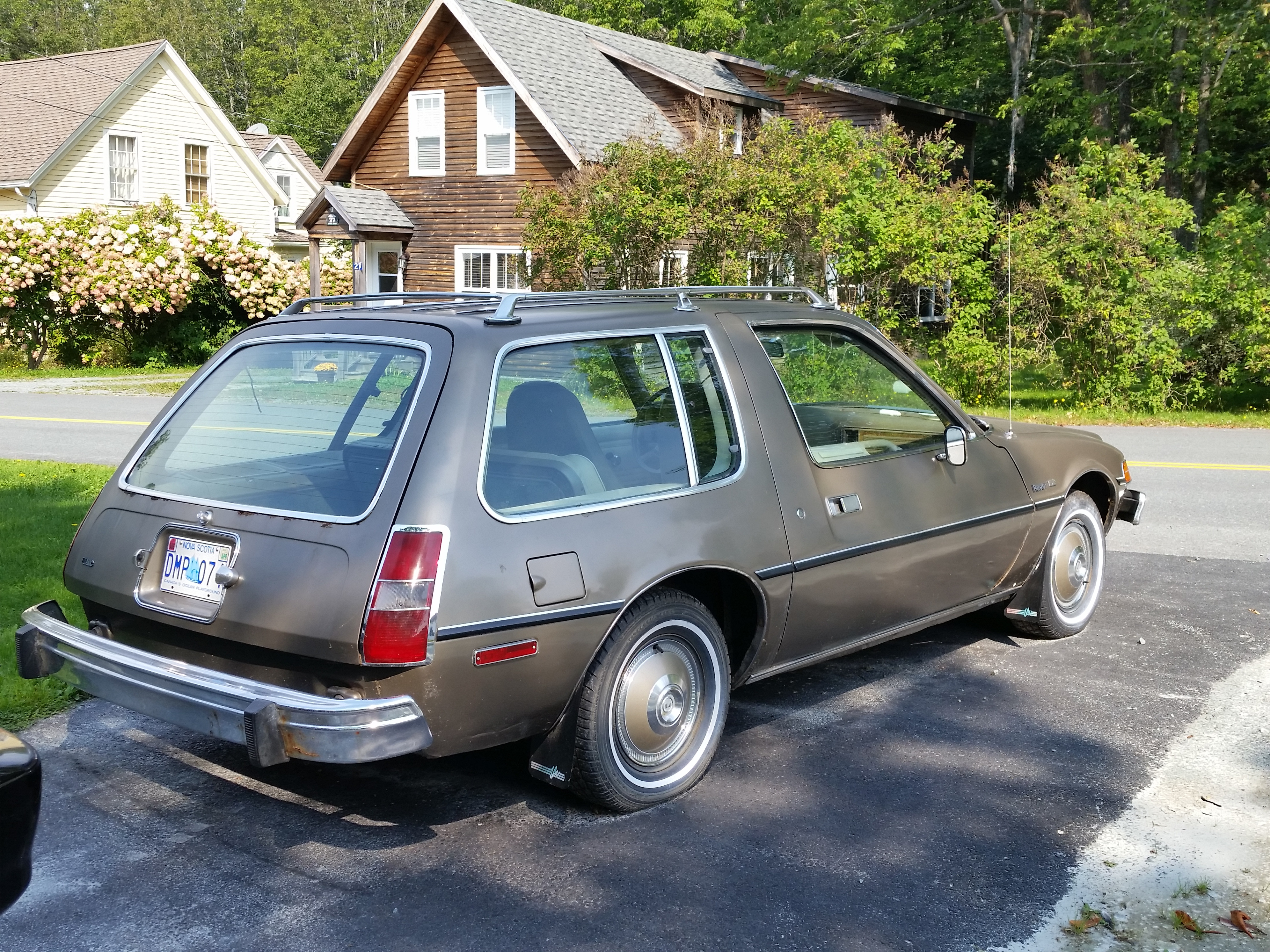 When you come from an AMC Pacer family, it is always an experience to see one in the wild. Nova Scotia, of all places! I still drive around my dad’s 1975 model. It was the first vehicle I rode in after I was born. 🙂 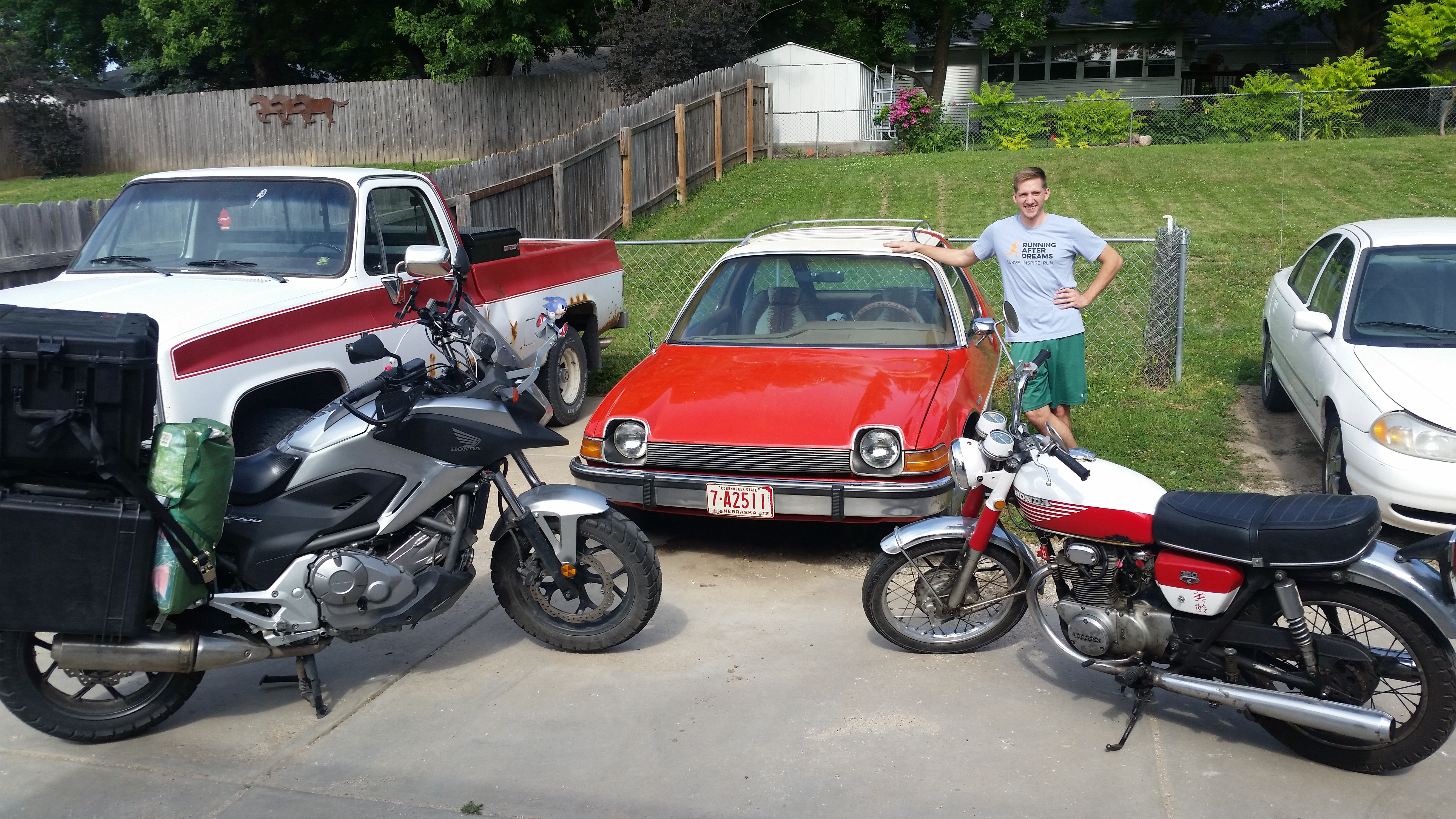 The site (or at least very near) of Hank’s birth is commemorated with a playground. Hank suffered a tremendous amount of abuse during his youth, so he had a special place in his heart for children. He even established the Hank Snow Foundation for the Prevention of Child Abuse.

Vernon is a really neat guy. As he talked about Liverpool’s history, you could hear how much he takes pride in the area. Just like Kingston, Liverpool was a major area for Loyalists. Americans invaded during the war of 1812, but were turned back after making landfall. (I assume they just got distracted and decided to stop by the tavern instead.) 🙂

All told, we spent about three hours together. It was an honor to meet him and I felt flattered that he spent so much of his time with me.

Realtime update: I’m about half way through the Hank Snow book. It’s great!

Having been so busy the previous 30 or so hours, I now finally had a chance to look through the museum. The building itself is the former Liverpool train station. It has a special connection to Hank Snow.

Because of his domestic situations, Hank would sometimes have no place to go at night. The station was open 24 hours, so he would sometimes sleep on the benches or the floor. Again, his life story continues to impress and inspire me.

Hank had many nicknames early in his career, but “The Singing Ranger” is the one that finally stuck: 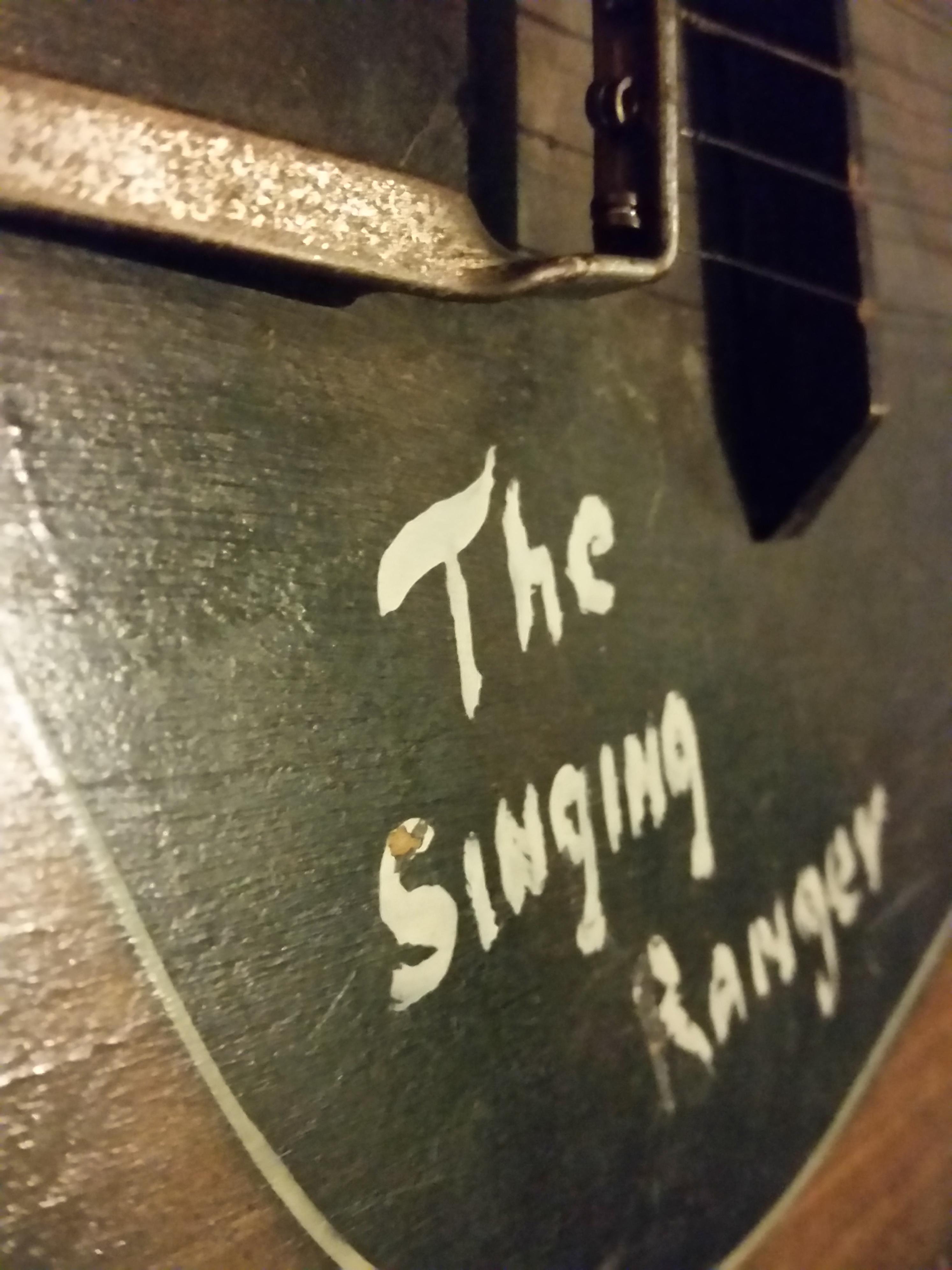 He was known for the flashy get-ups he would wear on stage. Indeed, you have to be a real man to wear something like this: 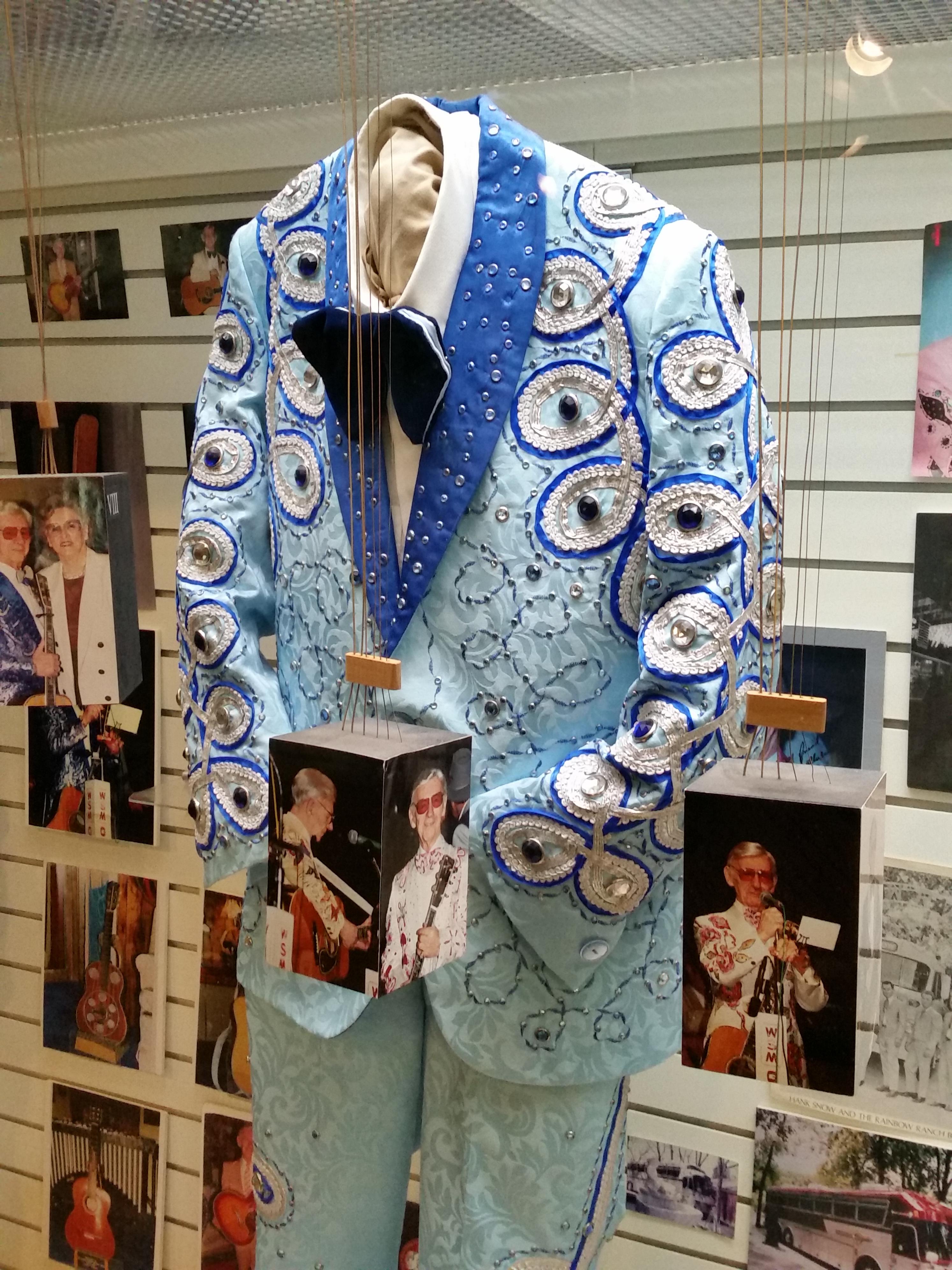 I could go on and on, but instead I would just encourage you to read Vernon’s book!

I got a t-shirt and double CD to commemorate the occasion. 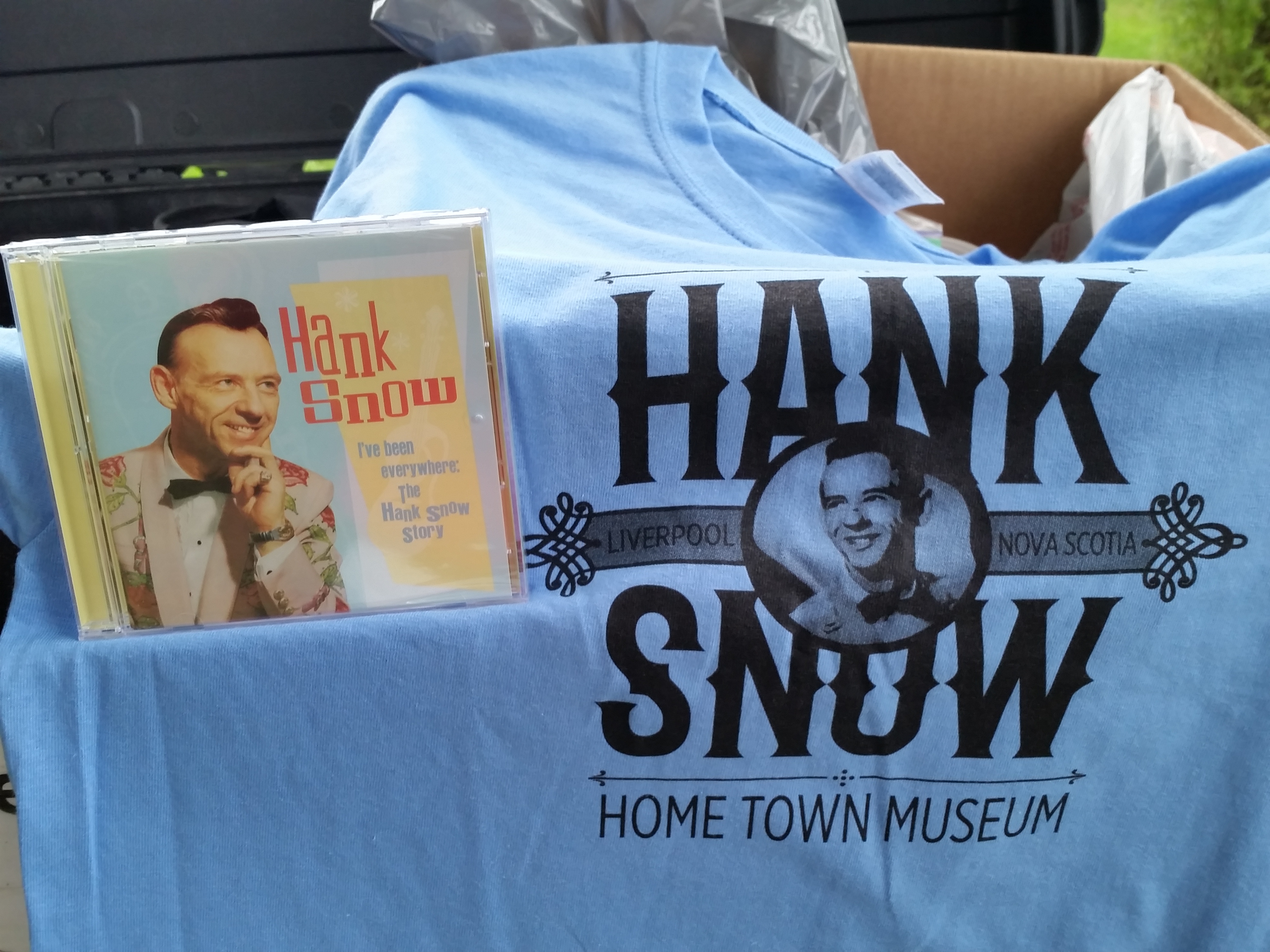 I also got a sticker, which became the first adornment on my left side case. (though the right side has 1 sticker and 8 signatures…hmmmm): 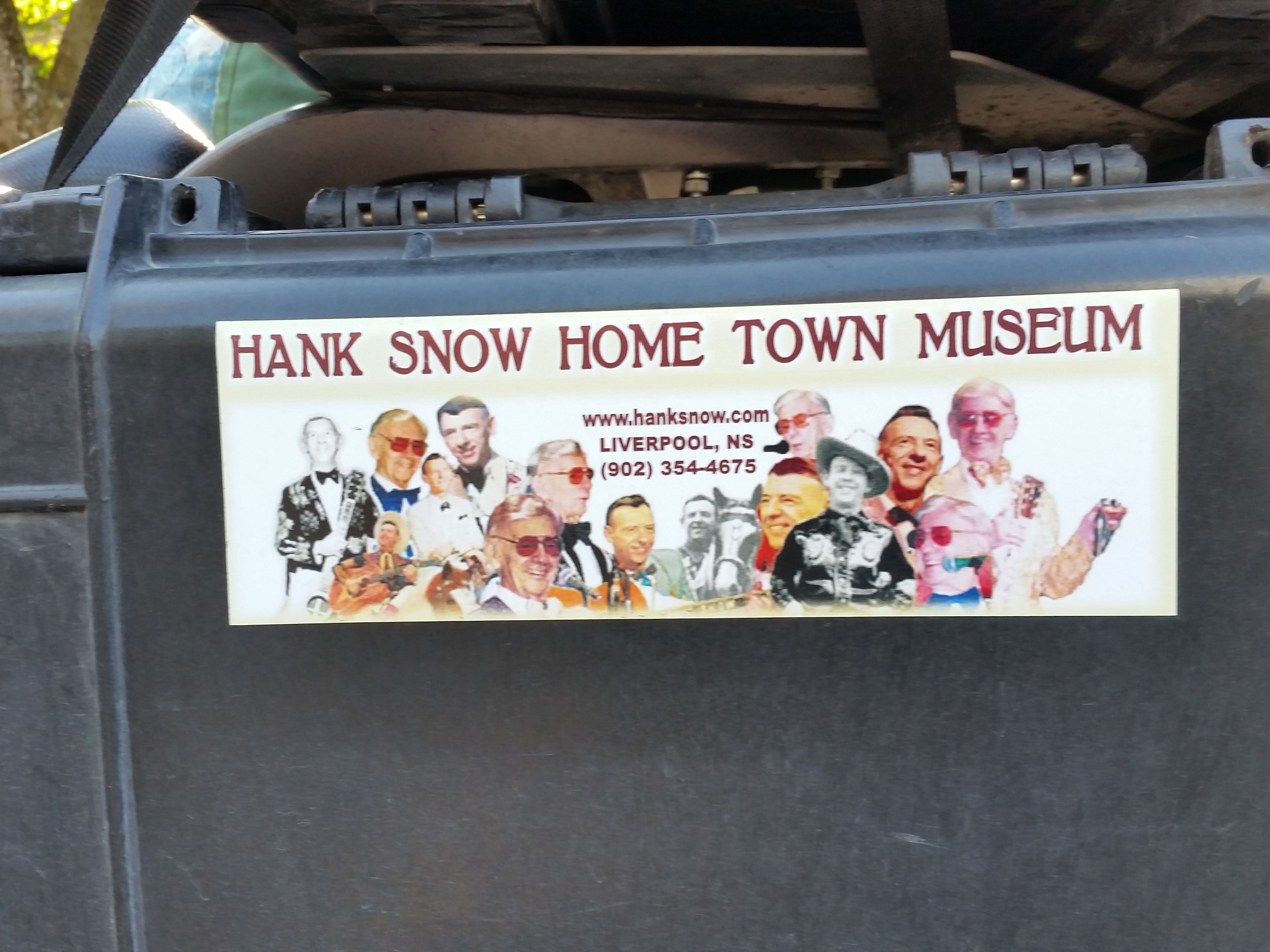 Realtime update: I realized I had not photographed this so I jogged about half a mile in my $25 Walmart boots from the Montpelier library to where Annie is parked. I hope you all appreciate the effort that goes into these posts! 🙂

Nancy actually threw in the sticker for free.

But my fortunate day had one more treasure:

I began the day without any signatures on Annie from residents of British Columbia. Apparently, they travel in gaggles like Canada’s eponymous goose, as I had five by days end. The final one was from a gentleman named Murray.

We met in the museum and began talking about my bike. As we looked Annie over, it was obvious that he was rider too. He has also been on an epic trip this summer, though this one he is doing with an RV.

We actually bumped into each other at the grocery store and he invited me over for a chicken stir-fry supper. He was camping on the museum grounds too. We really hit it off and had a wonderful time chatting. We’re both used to eating alone, so I think we both enjoyed the company. 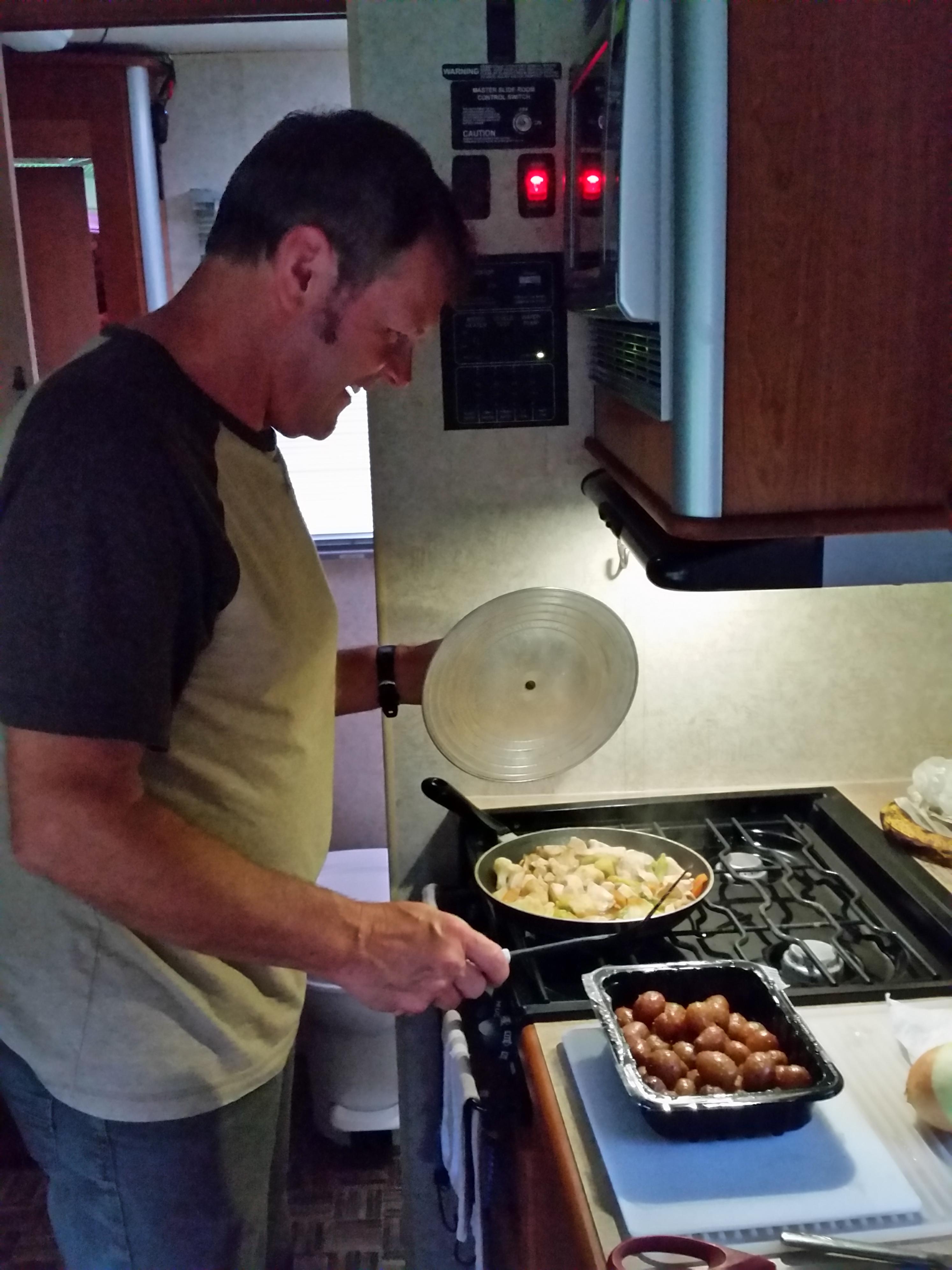 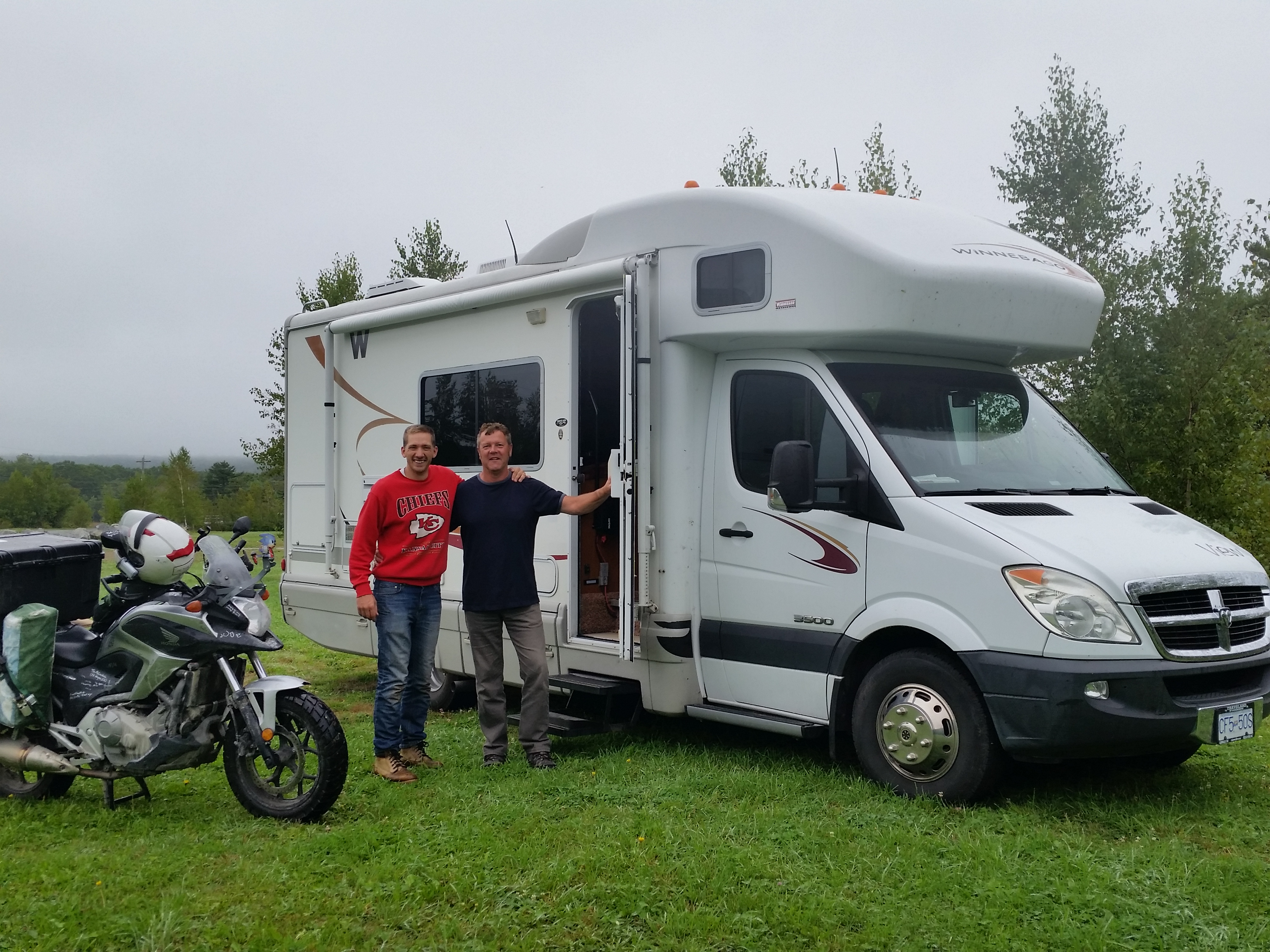 Anyone who has followed this blog has seen what I tight budget I keep on my adventures. Though I believe this is the correct way to go about this journey, there are days when living like a pauper becomes tiresome. A couple of days wallowing in abundance in Nova Scotia was just what the doctor ordered!