I hear Florida and Arizona are nice this time of year. But when I decide to do something, I do it big….and I usually include my parents. South we go!

By the time this post goes live, I will probably be on the road heading south. Chapter 3 is here! In this post, I’ll take a brief glance at my time at home and talk a little bit about what lies ahead.

My time at home was not too relaxing, in the traditional sense. I was working quite hard on all of the planning items to get Chapter 3 underway. However, just sleeping in a bed beneath a roof has been at least somewhat rejuvenating. Physically speaking, I feel ready to go.

Perhaps the highlight of my time at home was getting to have a happy, merry Thankschristmasgiving with my WHOLE family. Getting us all in the same room at the same time takes a minor logistical miracle. 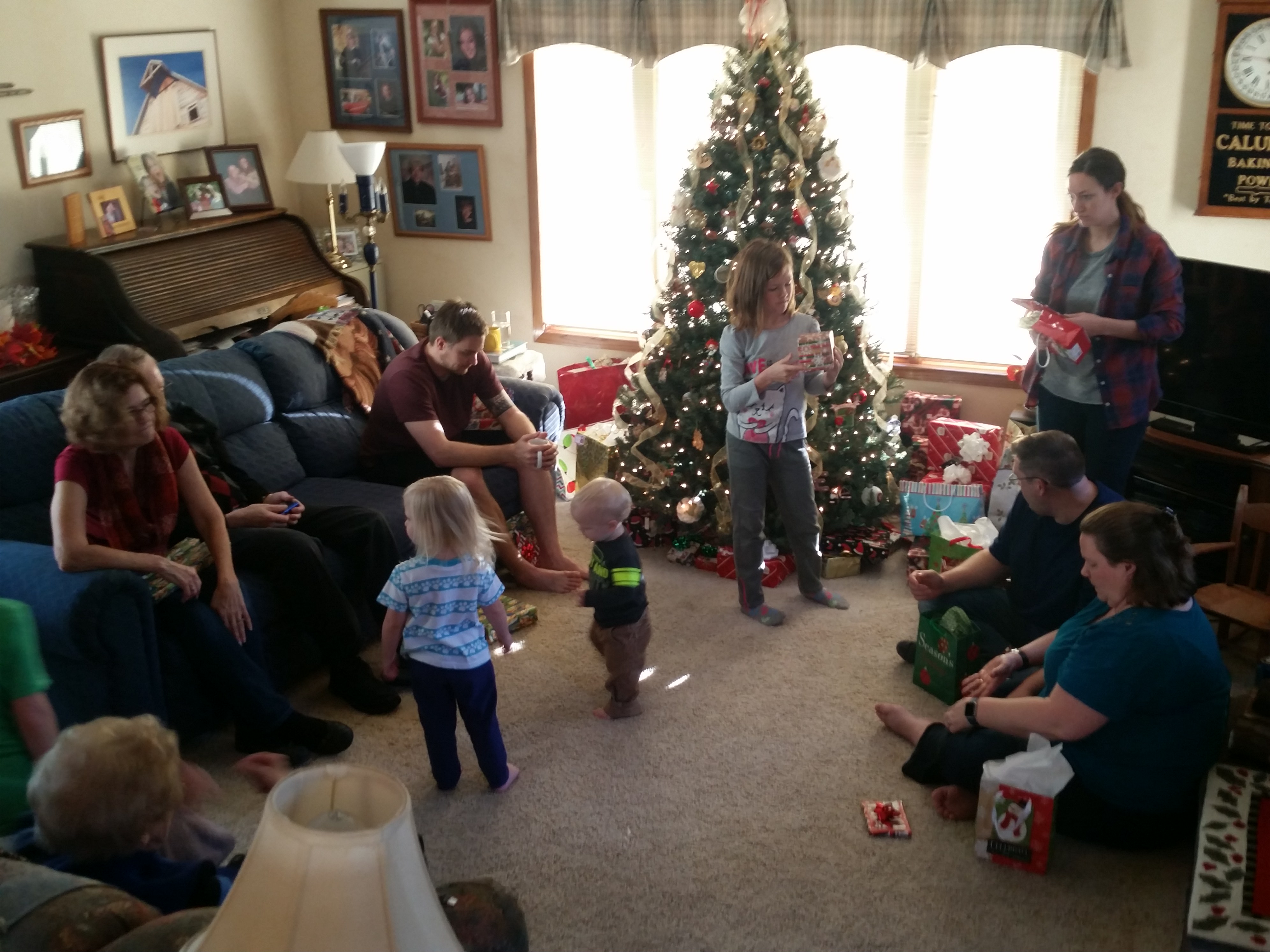 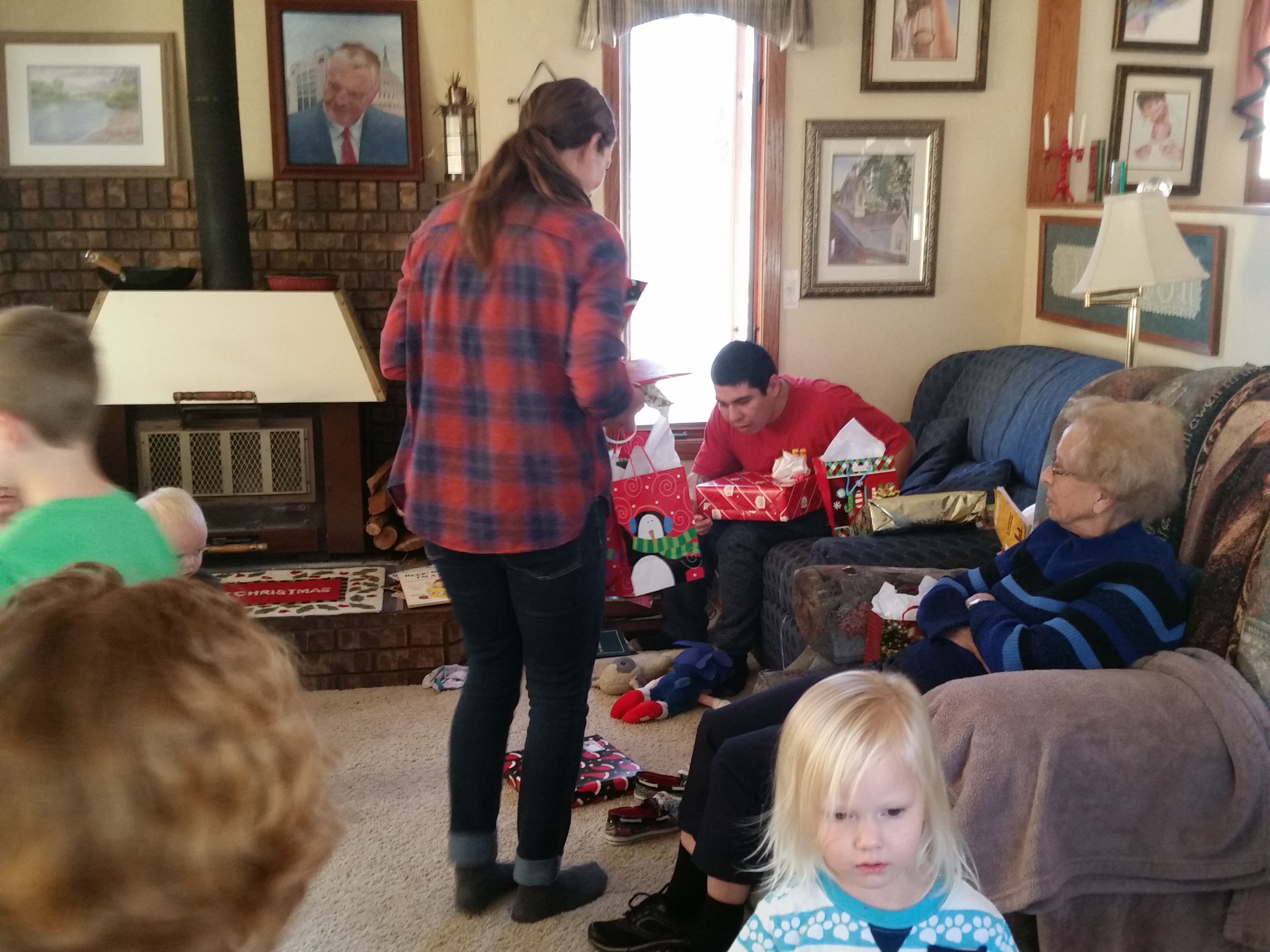 We are quite a bunch!

Lots of my time at home has been focused on mechanical and logistical things. I sought the help of some experts for the latter. (image at top)

As of this very moment, Annie is pretty close to ready to go. 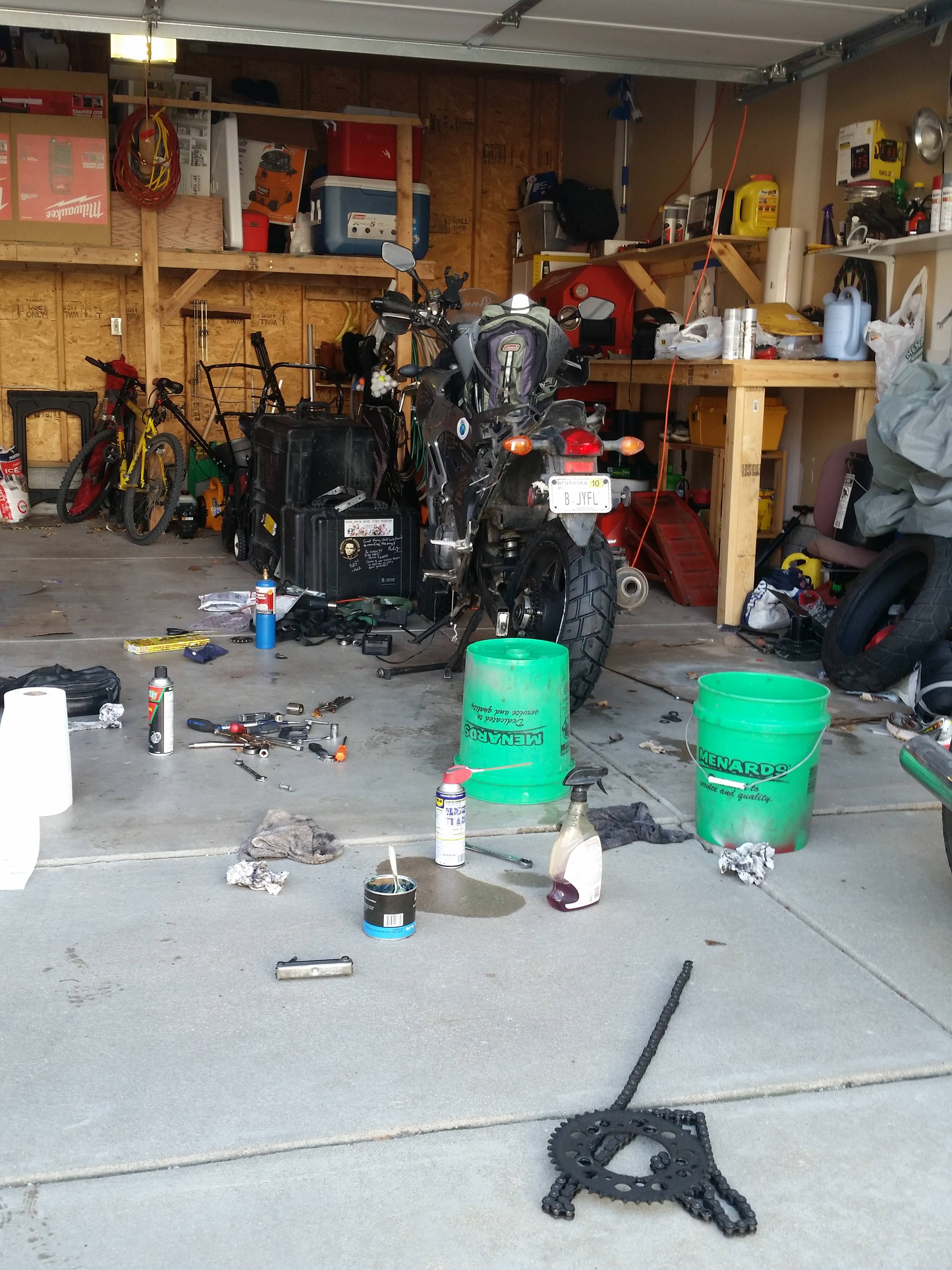 Few things are prettier than a new chain: 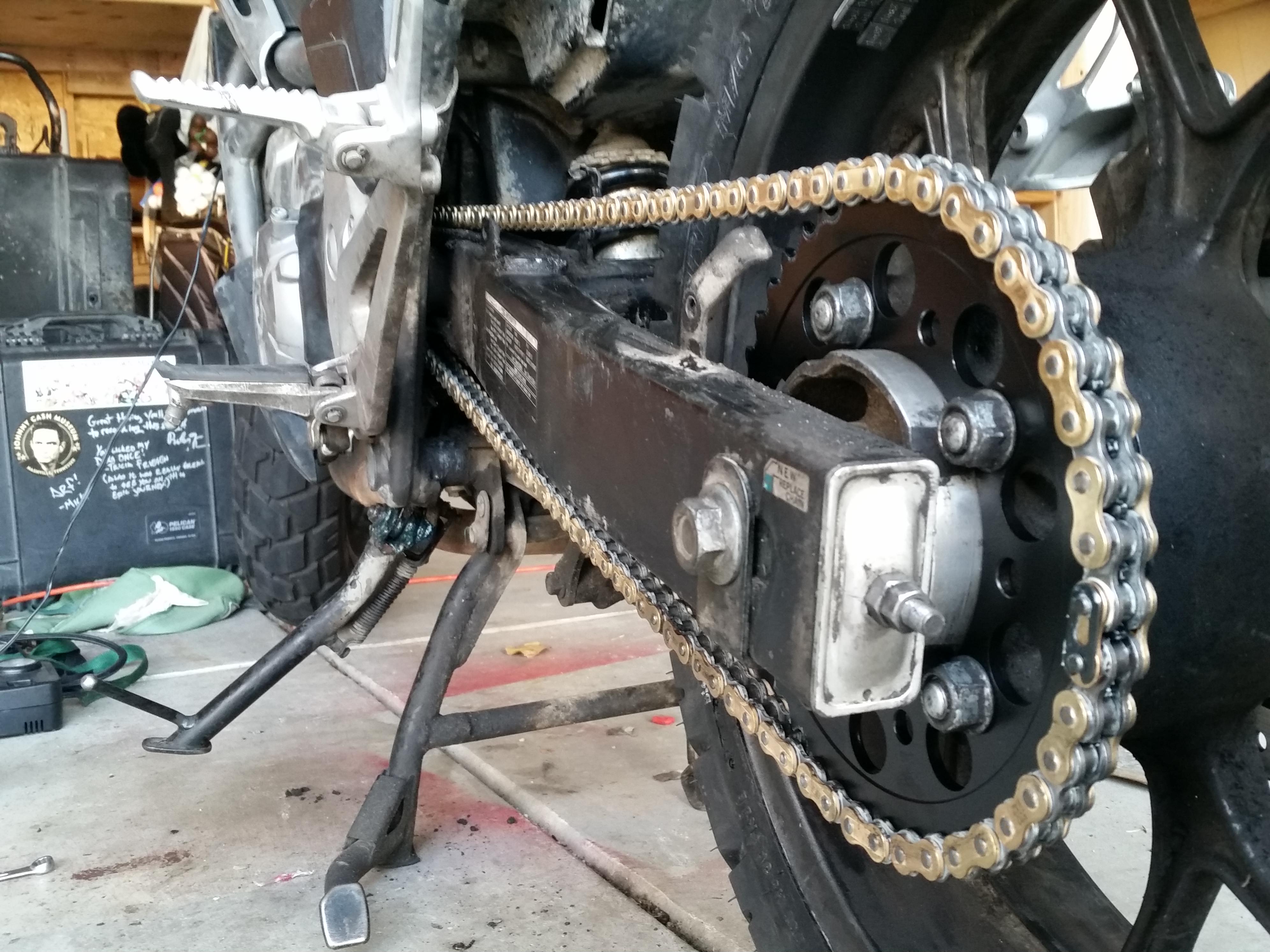 A few more additions to my accessory circuit. I’m running out of space! 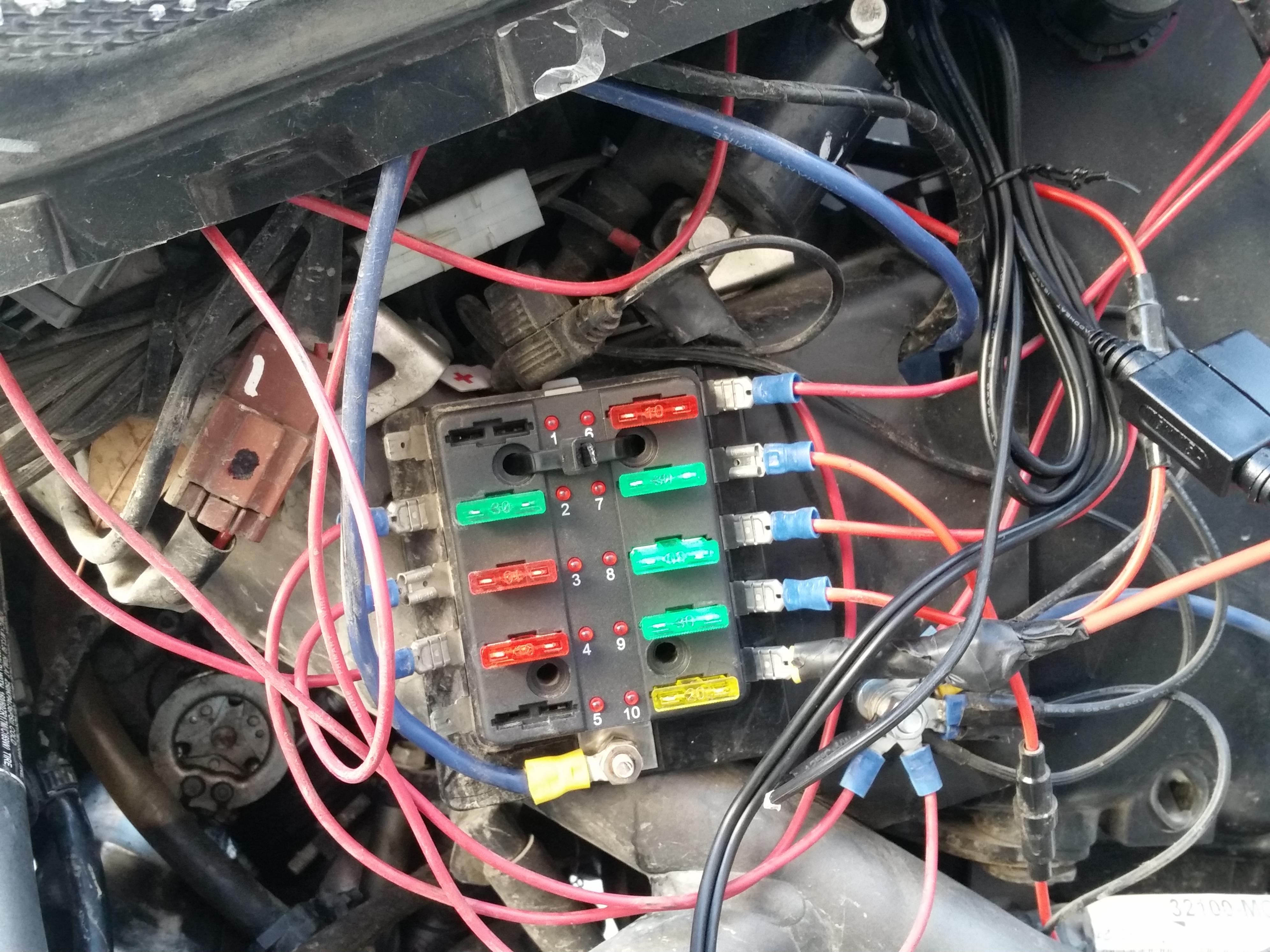 I made a fairly large mistake when replacing the rear wheel, tearing the tire bead and bending the rim. This means that I will have to run a tube in the rear tire for the time being. The unfortunate thing about this set up is that it eliminates the possibility of plugging a punctured tire. Though I’ve been puncture free for the first 27,000 miles, the roads in Central America are a prime location to have my first one.

For you perverts who have been asking for a topless picture of Annie, here you go: 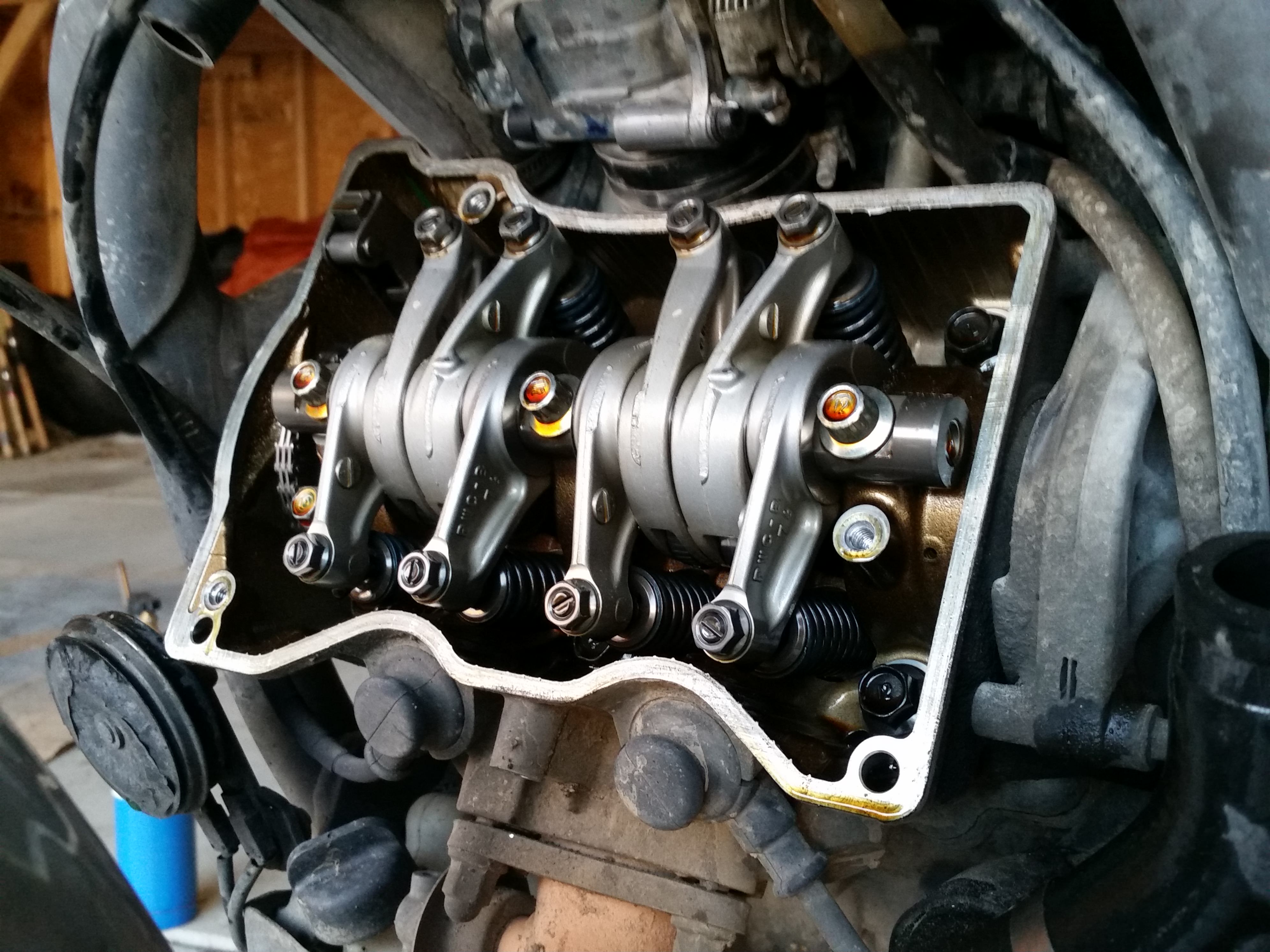 I got to have sort of a celebrity experience when I went to AAA to get an international drivers license. As I talked to a lady named Paula, telling her my story, a gentleman named Bob came out of his office. “I know this guy…” he said. It turns out he has read my thread on the website ADVrider. I haven’t gotten any press exposure in Lincoln, so this was both fun and surprising. 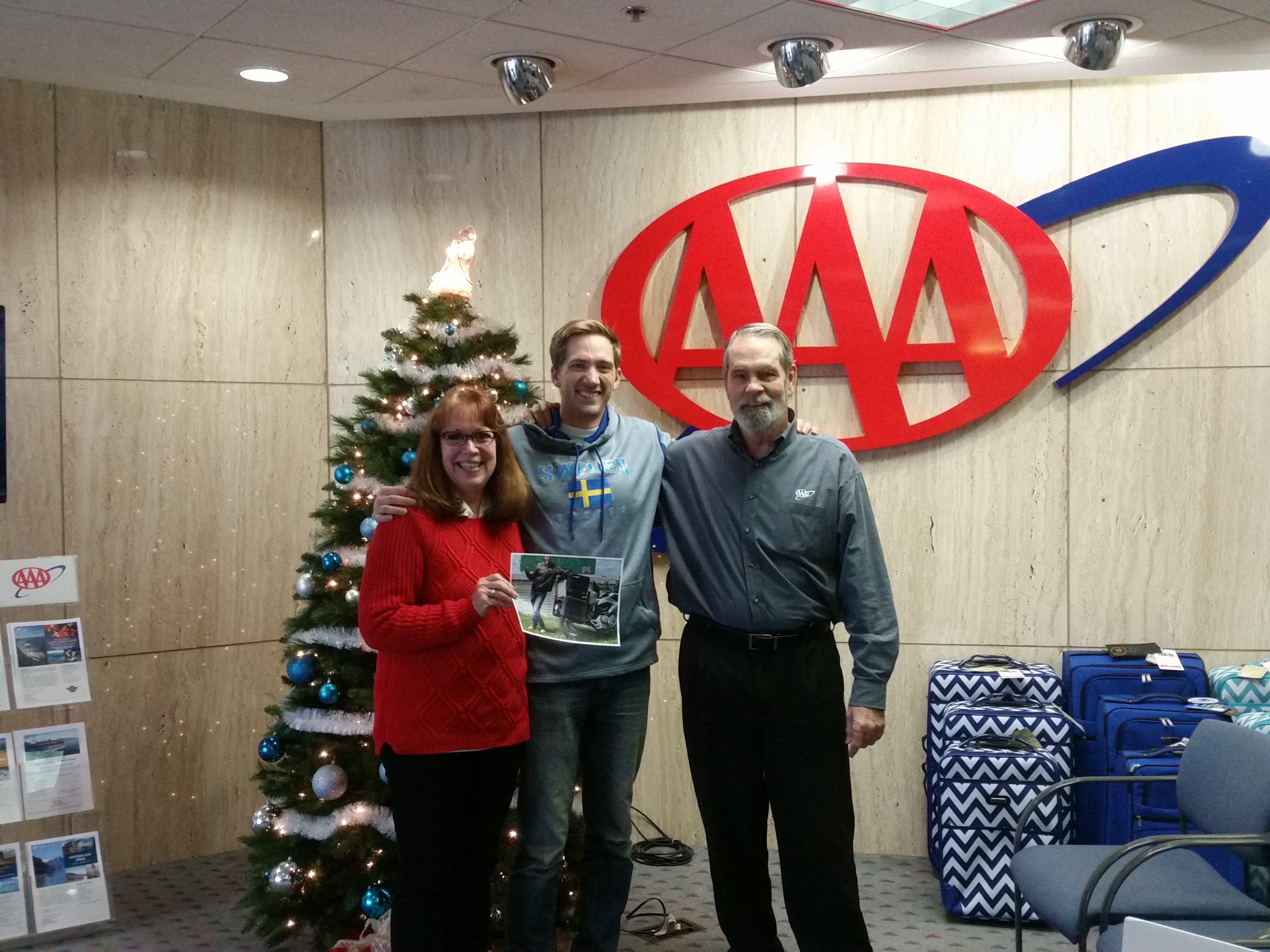 If only it were that simple.

Chapter 3 will involve me passing through at least 16 countries, so there is a lot to plan for. I won’t bore you with all the details, but I think I’ve cleared most of the major hurdles.

One of the things bringing me the most excitement currently is the fact that I will have company for the first week or so of my trip. 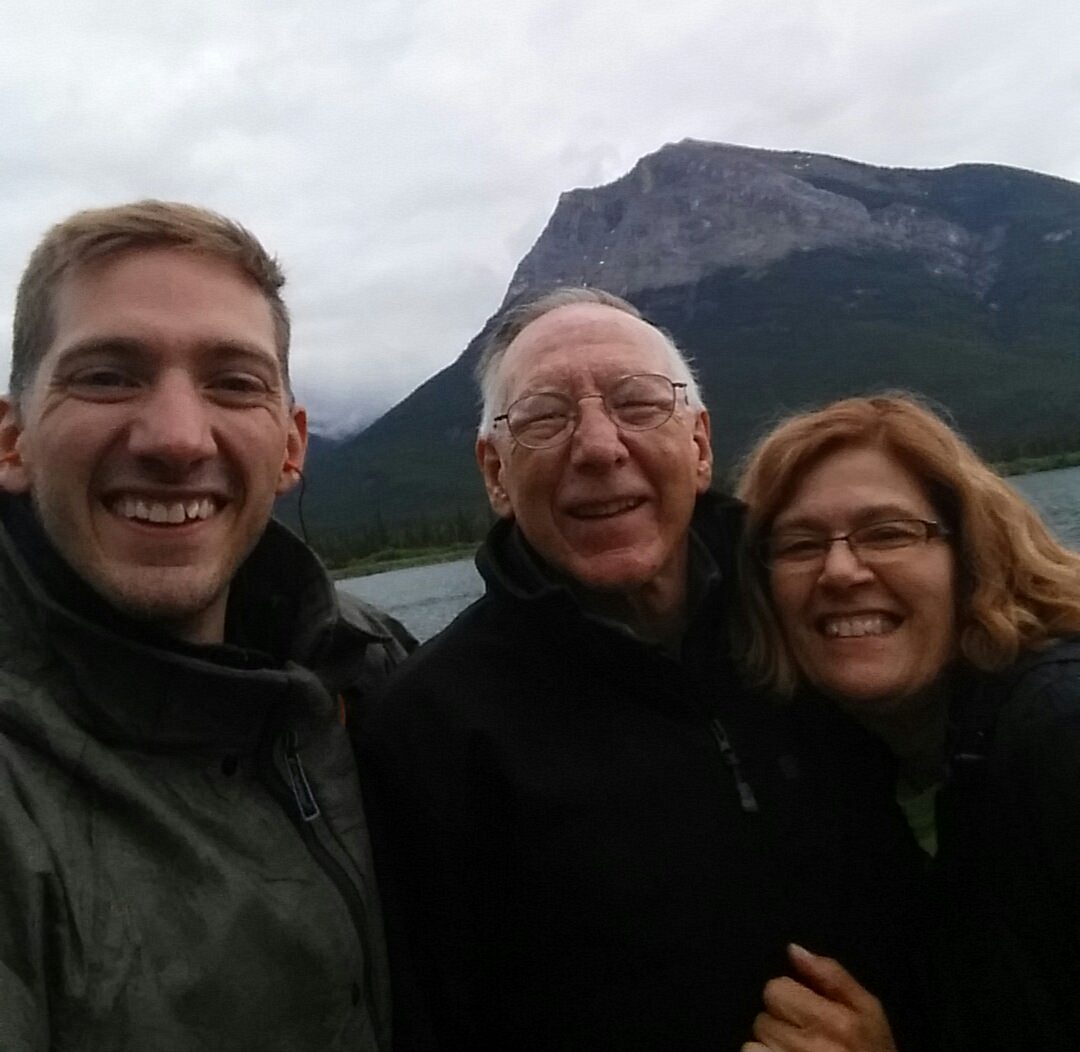 Yes, my crazy parents are going to be joining me. They plan to follow me down to Monterrey, Mexico for a Feliz Navidad. This is a huge blessing on so many levels.

Perhaps the most stressful part of this trip occurred before I even left my driveway. Though my parents were totally on board for the North American portions of my trip, they had major reservations about me travelling south of the border. I knew their concerns came from a perspective of love, but it was difficult to have such disagreement on the subject. The last thing I wanted from my trip was for it to be something that caused distress and torment for people I love.

I’m still not sure why or how, but now they are much more comfortable with the idea. (Perhaps they would like to write a guest post about why this is?) I know they will be praying for my safety furiously, but the prospect of this chapter no longer seems to be something that they dread. Their decision to come along validates this. Or maybe they think that they’re going to fight off all of the drug runners and human traffickers themselves. 🙂

North and Central America will look something like this:

This is a very rough draft. It will probably be closer to 5,000 miles with various side trips and such. I’ve decided that I am going to skip over visiting the following song places on my way down: Wichita, KS; Oklahoma; Tulsa, Oklahoma; Hennessey, Oklahoma. These places will become part of Chapter 4, the final loop of the trip. (Lord willing)

Once I reach Panama, I will have to find alternate transportation. The Darien Gap, between Panama and Colombia, is the only piece missing from the Pan American highway. How this 60 mile stretch is still un-drivable is beyond comprehension. Boat or plane will be my only way into Colombia.

At my Grandma’s house, there are decades of National Geographic magazines which I usually peruse while I am up there. This time I found one from 1981 which reported extensively about Central America. Even then, the proposed road is marked as “Under Construction.” 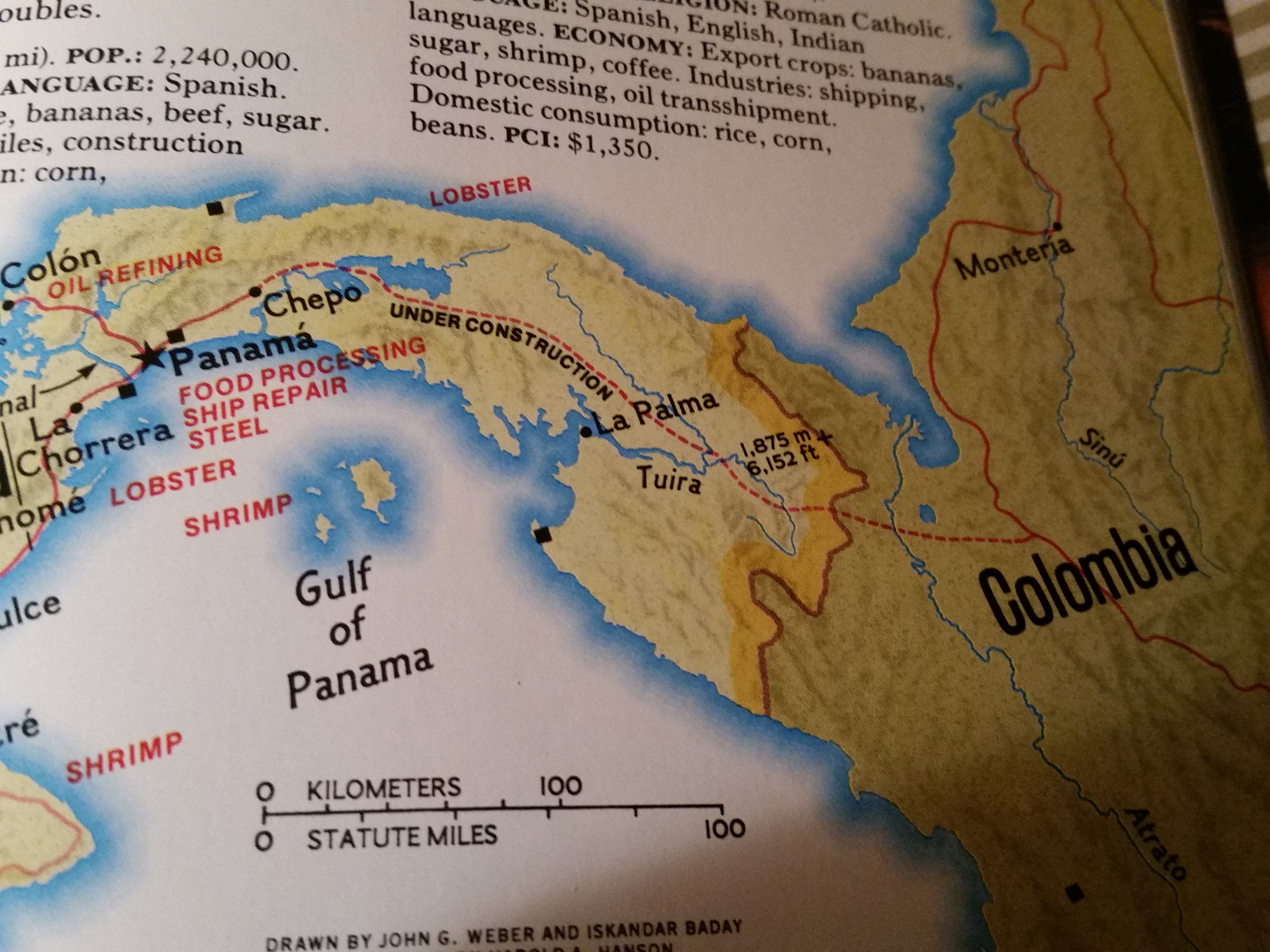 I both laughed and cried at this.

Probably the most economical way around the gap is to share a shipping container with fellow travelers. There is no ferry service. If I’m able to get Annie into South America for less than $500, I’ll consider it a win.

The first part of my time in South America will be something like this:

I’m still undecided about whether I will attempt to reach Ushuaia, at the tip of the continent.

Once I complete Salvador, Brazil, my Central and South American places will be complete. There’s no road through the rain forest, so I’ll probably ride through Bolivia and back up the way I came. In case you have forgotten, South America is huge. 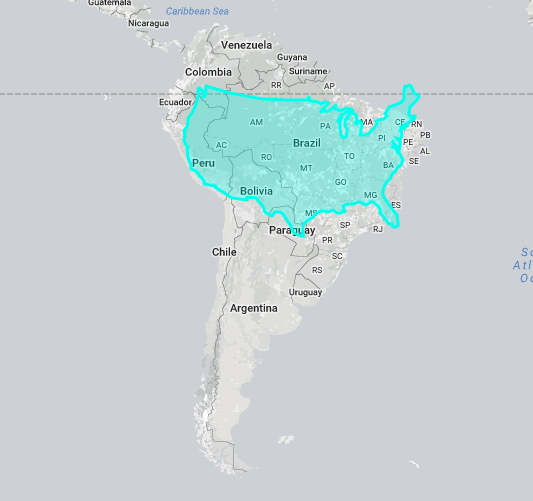 Once I get back to the US, I’ll try to finish up some stops I missed in Chapter 2: Houston, TX; Louisiana; Ferriday, LA; Shreveport, LA; Texarkana, AR; Springfield, MO; Kansas City, MO.

Easy right? This should be around 25,000 miles. I have no idea how long it will take in terms of time. I will try not to rush.

I guess I should talk a little about this as it’s about to become a major element of the story. I’m not really sure how to rate my Spanish at this moment. I’ve never taken any formal classes, but I’ve done a decent amount of study on my own. Though I must confess, I am not at the level that I wish to be. Language comes fairly natural for me, so I hope that I’m not leaning too much on that fact.

I am fully prepared to be completely lost for the first week or two. No amount of study can mitigate the shock of initial immersion. Stopping to take classes may be an option, but I want to see how it goes first. I believe that by the end of Chapter 3, I will be speaking Spanish at a reasonably functional level.

I made this in response to some questions about my luggage system. It basically talks about how the bike and its peripherals are set up.

Next update will be from the road. I hope I still have some words left. Peace!

11 thoughts on “Snowbird on Steroids”