Chapter 3 begins with a speedy jaunt down to the Mexican border.

My parents arrived at my house in Lincoln the previous night so that we could get a decent start to the day. I still had a few packing things to take care of so we were not on the road until around 9:30.

My first weather check of the morning showed 27 degrees, but it was a balmy 30 by the time we departed. Though this is quite a cold temperature at which to ride a bike, it could have been much worse. I was thankful that I was going to be heading south before the first big snowfall.

Also helping matters was a wonderful Christmas gift from my parents: A heated vest! It plugs right into my accessory circuit and puts out a decent amount of heat. Though after all of my years of cold weather riding, it kind of feels like cheating.

And so begins Chapter 3 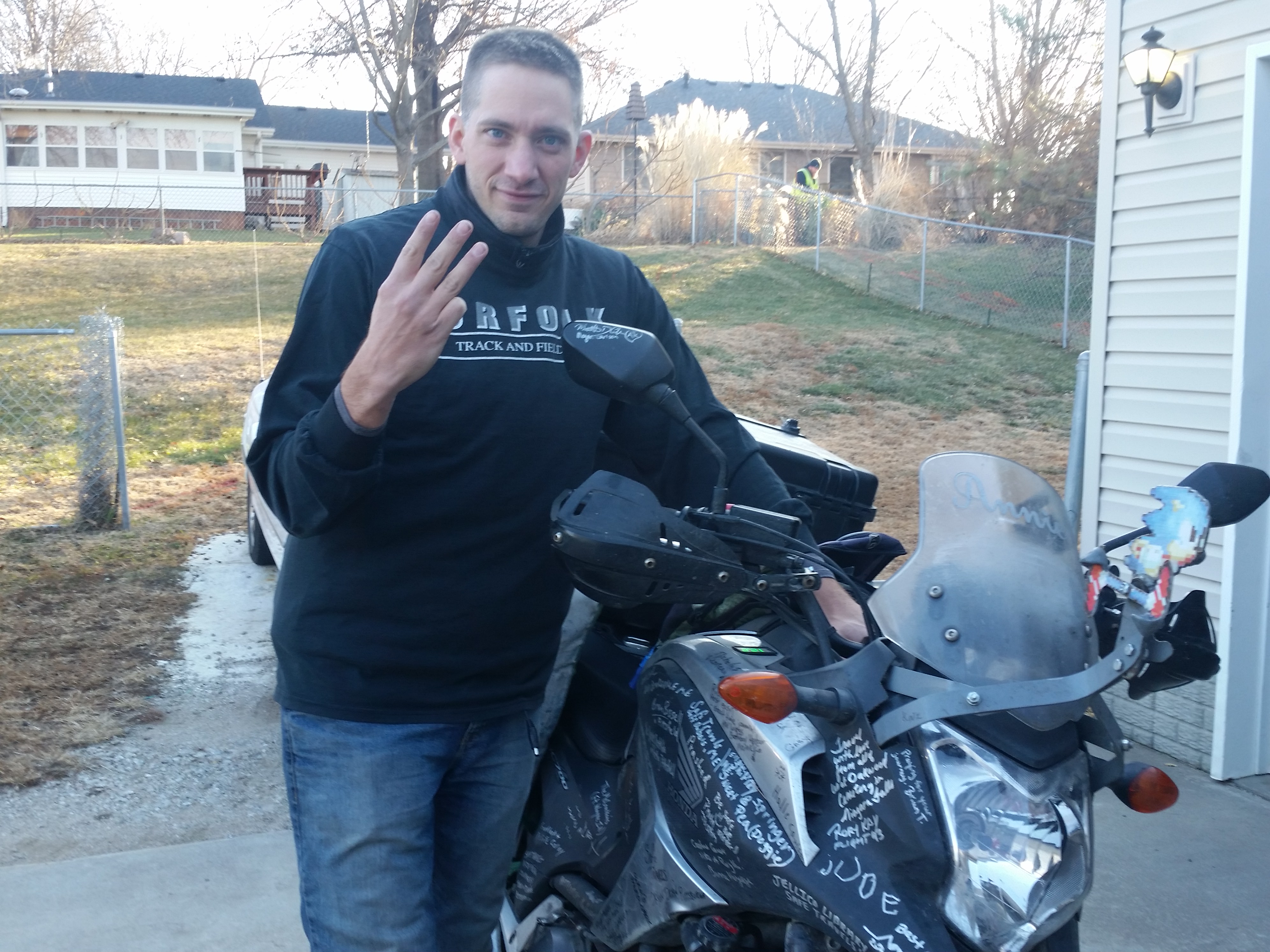 I invited my parents into the photo and told them to make a tough face. They are just too photogenic. (picture at top) 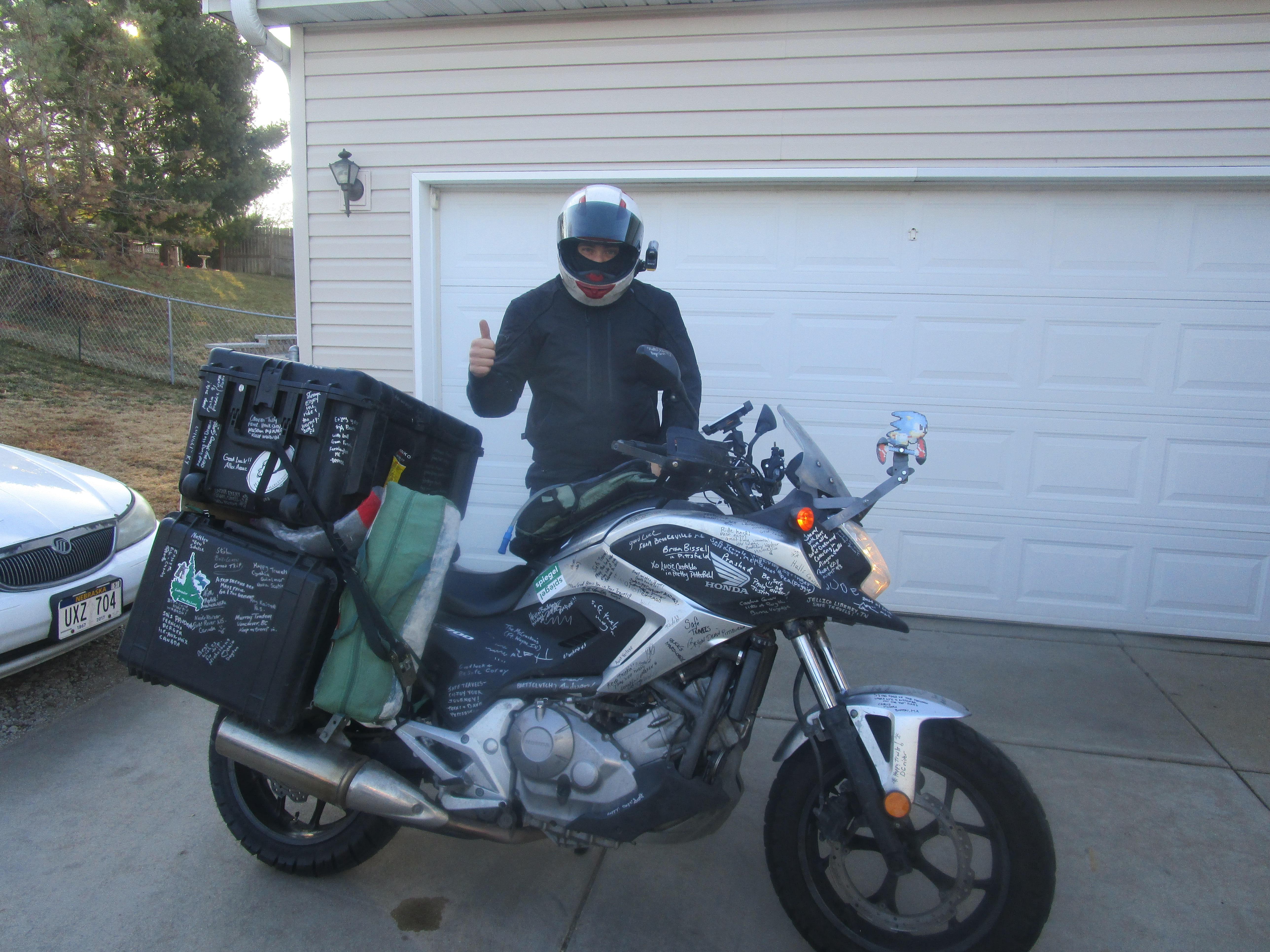 I wasn’t feeling much in terms of emotion as I rolled out of my driveway. There was some slight relief at being finished with packing and preparations, but not much else. I felt neither scared nor elated. Perhaps I was feeling both of these things in equal measure and they just canceled each other out. I guess I’ll never know.

Our first stop was for lunch with my Aunt and Uncle, Verlene and Gary, in Clifton, Kansas. Verlene holds the (dubious?) honor of being the first follower of my blog. Believe it or not, she’s not actually the last! My Uncle Gary and I have always had a connection through passion for bikes. He is obviously a man of considerable restraint, only housing four of them in his garage at the moment. 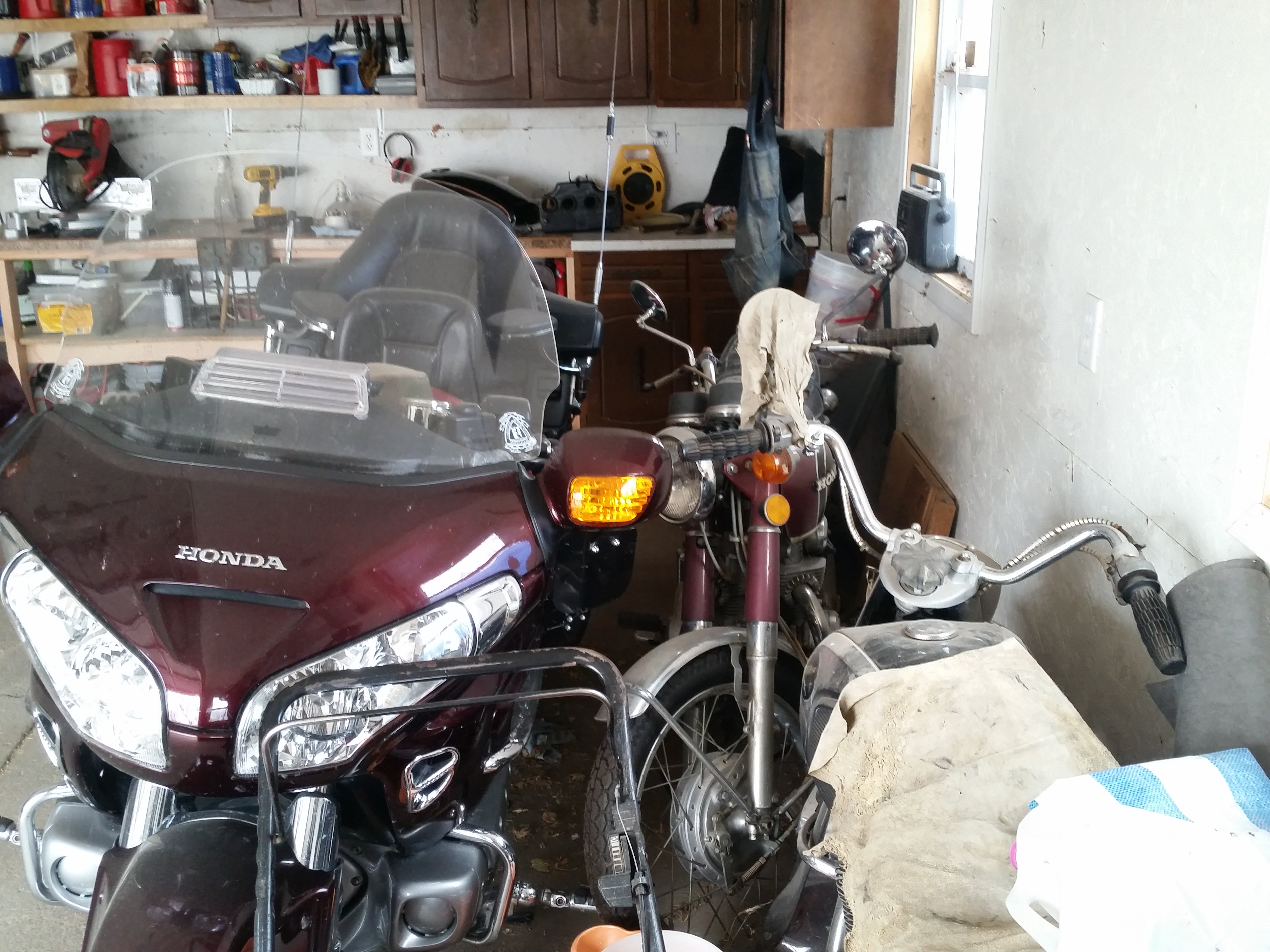 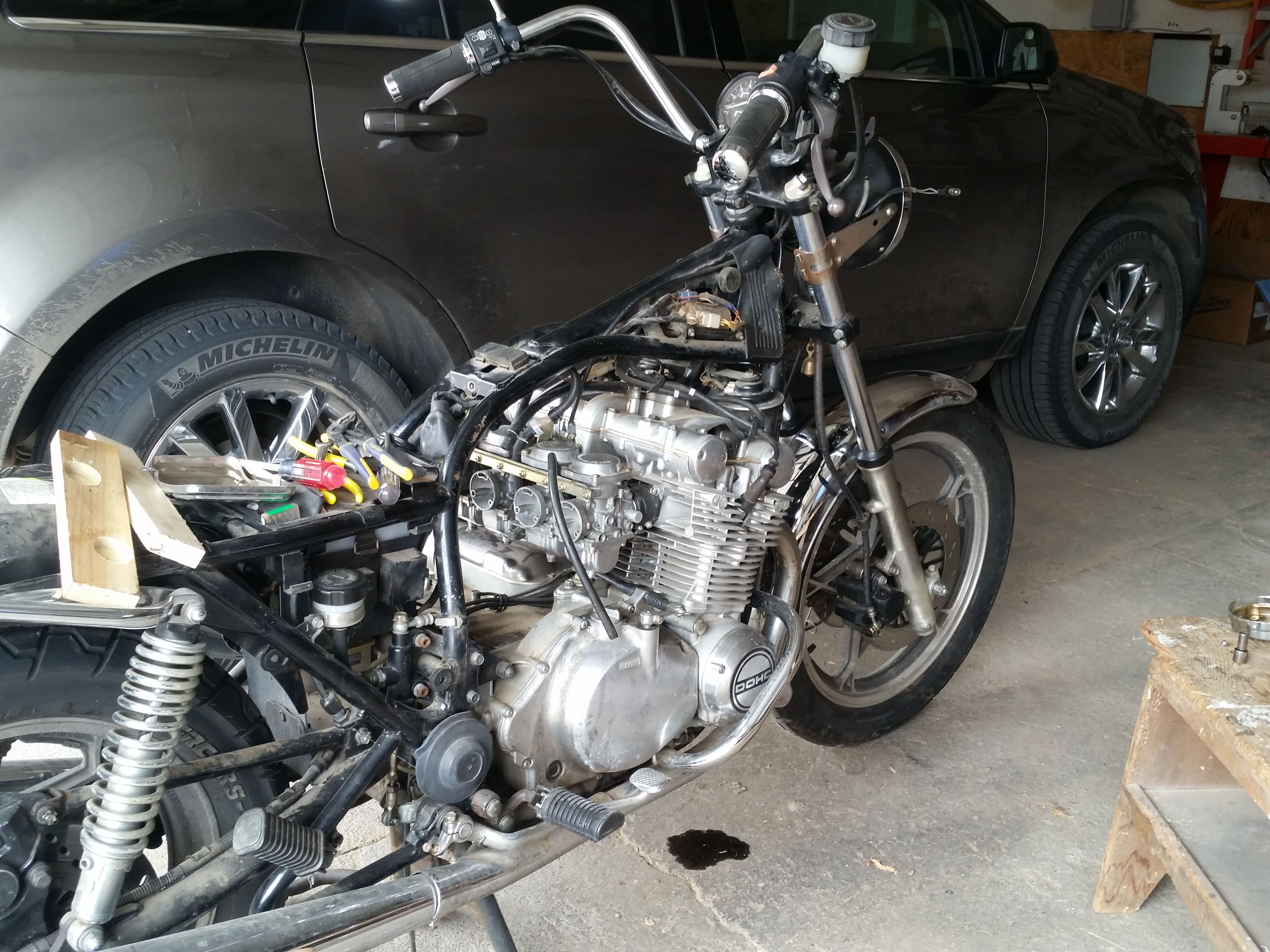 Some warm soup and hot chocolate helped warm my chilly insides. It was a brief, but enjoyable stop. 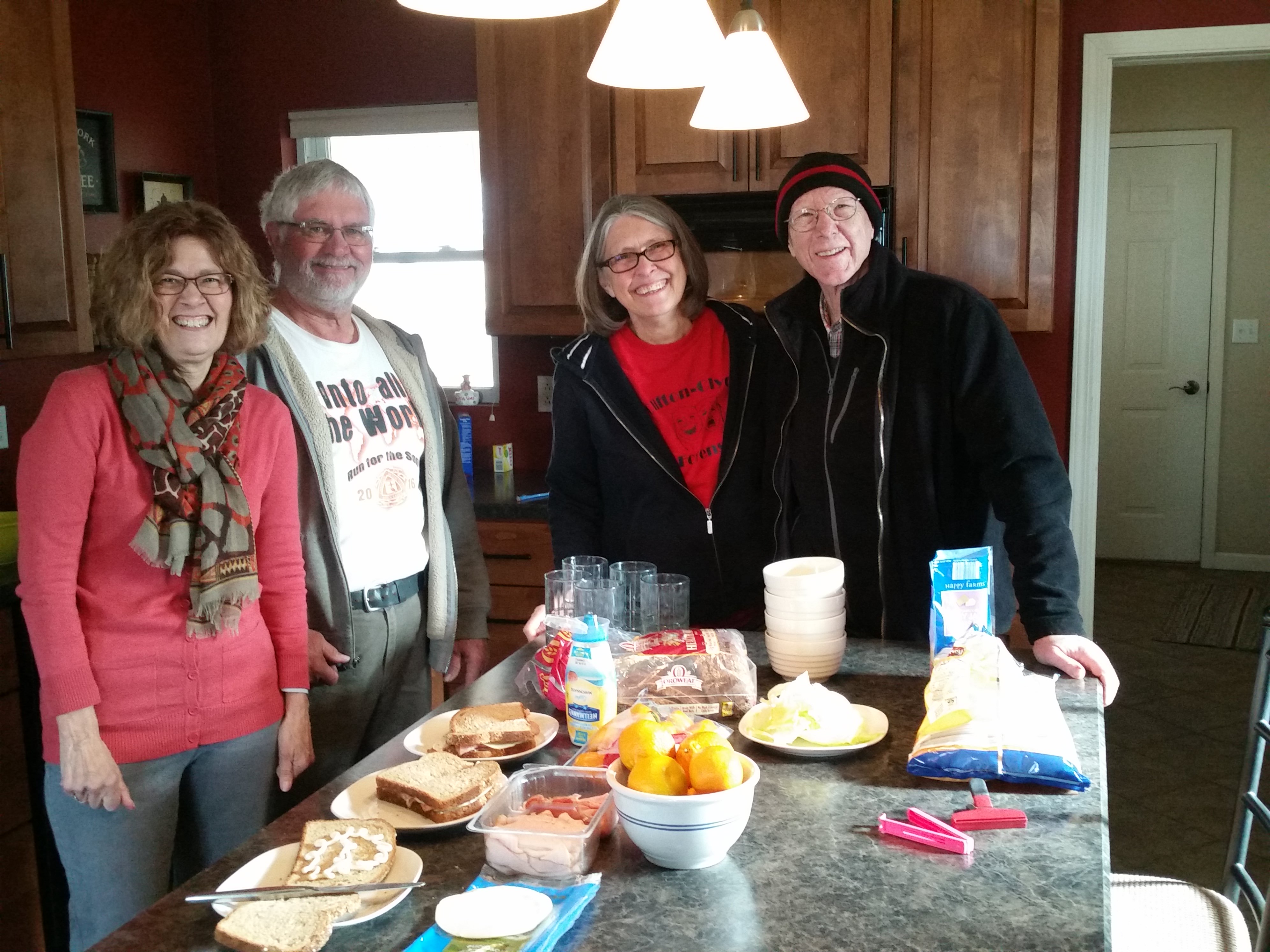 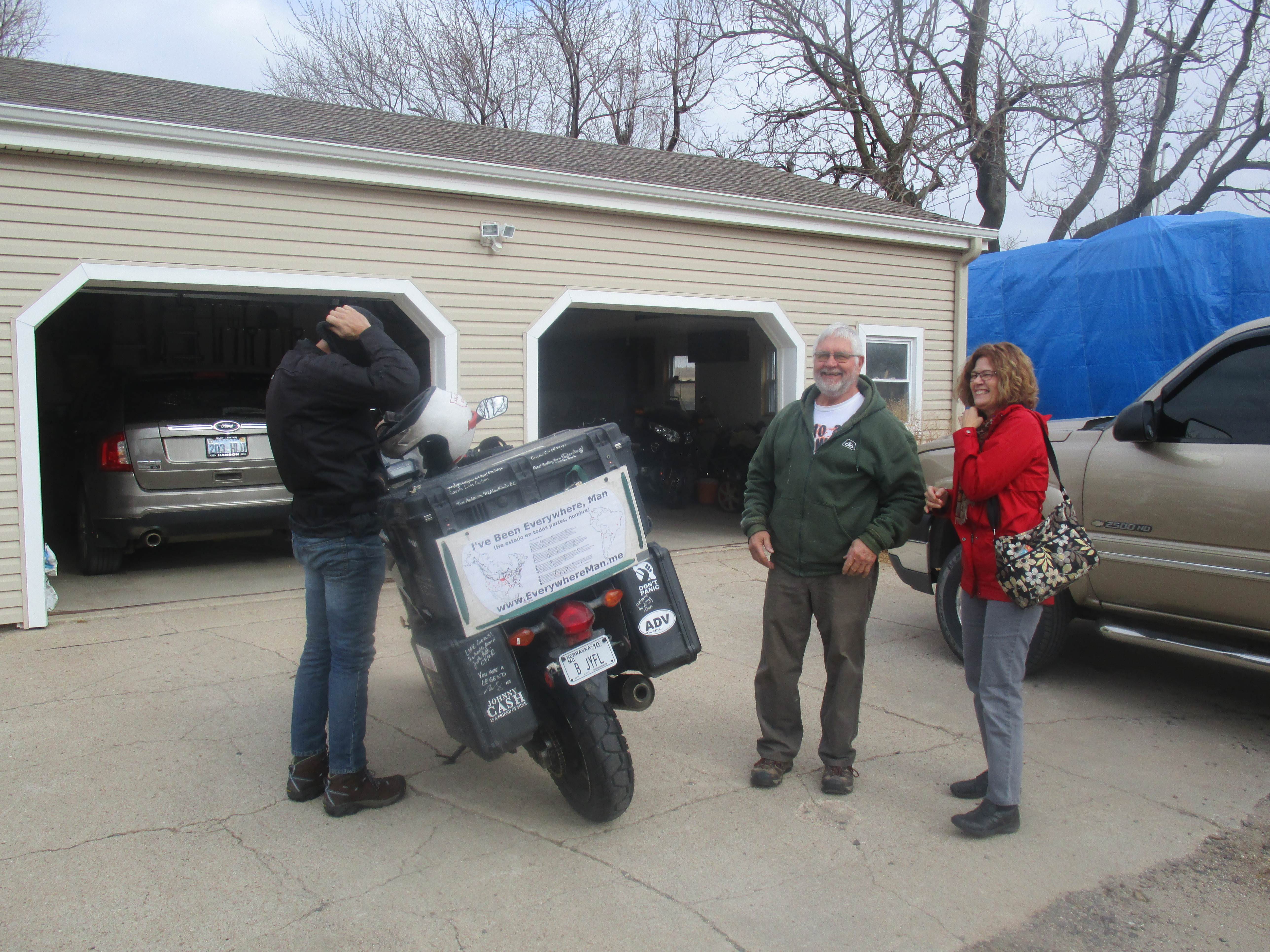 Shortly thereafter, I got into a little bit of a pickle. The wind was howling from the south, causing a real dent in my gas mileage. Unfortunately, I underestimated just how bad it was. By the time I started to have major worries, we were 20 miles from the nearest filling station. I nursed Annie onwards, but ran dry 2.3 miles from my destination. It was one of the least efficient tanks of the whole trip, under 51 mpg.

What a great time to have a chase vehicle! They picked me up and took me the rest of the way. Here is my face of shame, holding my gas in an “approved container.” 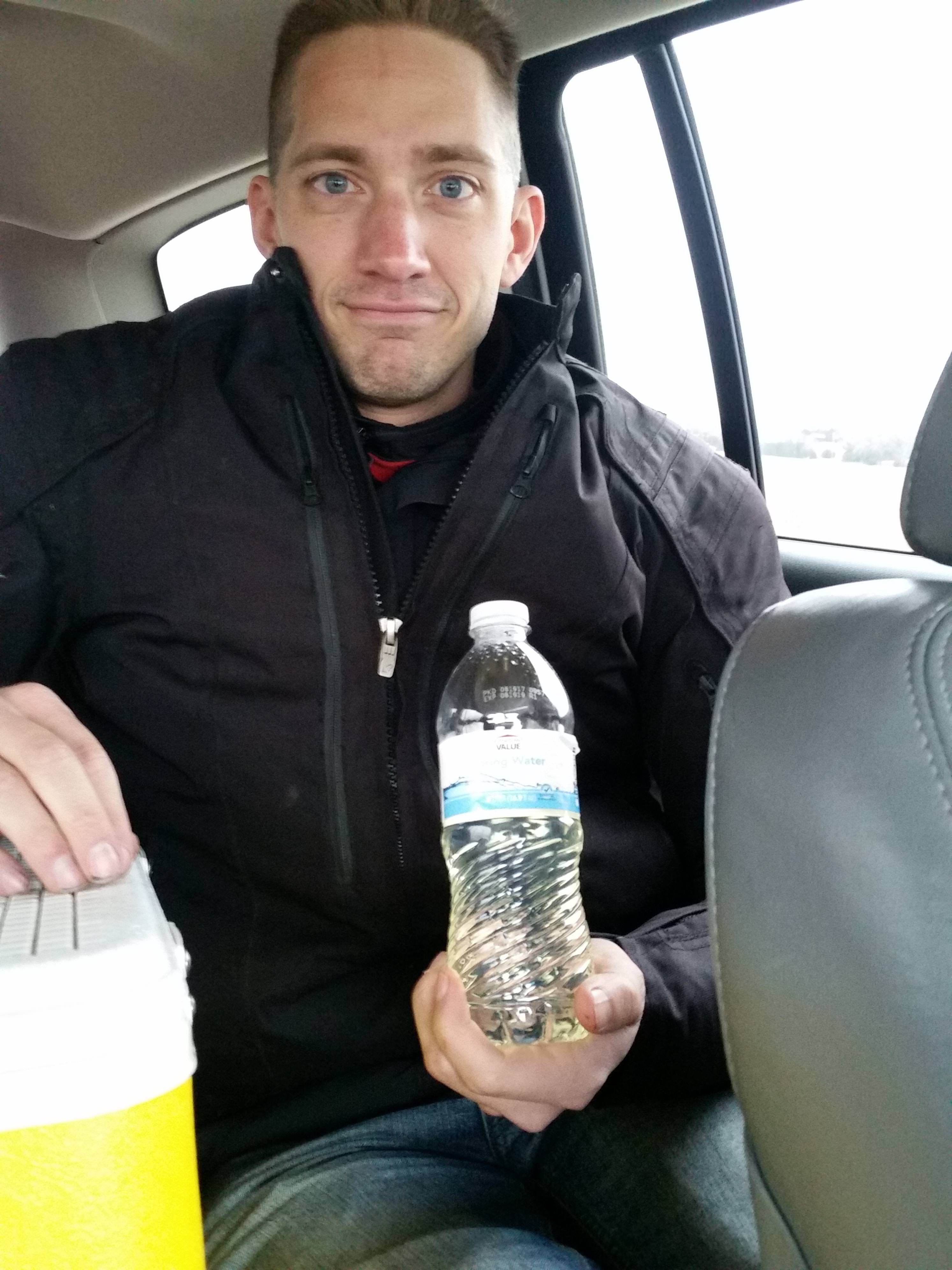 Most long distance motorcycle riders carry spare fuel on trips of this sort, but I have not deemed that necessary. When I’m somewhere remote, like the Alaska highway or the road up to Labrador, I plan out my stops meticulously. It’s a bit embarrassing to run out in the middle of Kansas.

The rest of the day was spectacularly uneventful. The temperature did climb into the 50s by the time we reached Oklahoma. We camped out in a hotel (wait…am I saying that right) in Perry, OK.

Happy solstice! On this day, I couldn’t help but reminisce about where I was on the summer soltice. I was at the very northern end of my whole trip: Fairbanks, Alaska. Though I stayed up until around 2am, I still didn’t see the sun set. This post seems like it happened years ago.

This was a classic Andersonian travel day. There are days to stop and smell the roses. Then there are days to just churn out miles. We took short breaks, ate sandwiches in the car for lunch and kept up a good pace. My folks didn’t slow me down too much. 🙂

After skirting Oklahoma City, we decided to take I-44 towards Wichita Falls, TX. This allowed us to avoid Dallas, Austin and Waco on the way to San Antonio. Plus, it is more scenic.

Shortly into Texas (the 43rd state I have visited on this trip so far), I switched off my heated vest and the landscape gave way to cacti and live oak trees. I recorded very little media during this part of my trip. I guess I sill need to get back into “blog mode.”

We made it as far as Marble Falls, TX before stopping for the night. We covered 450 miles and were able to stop before sunset. This is an acceptable use of the shortest day of the year. 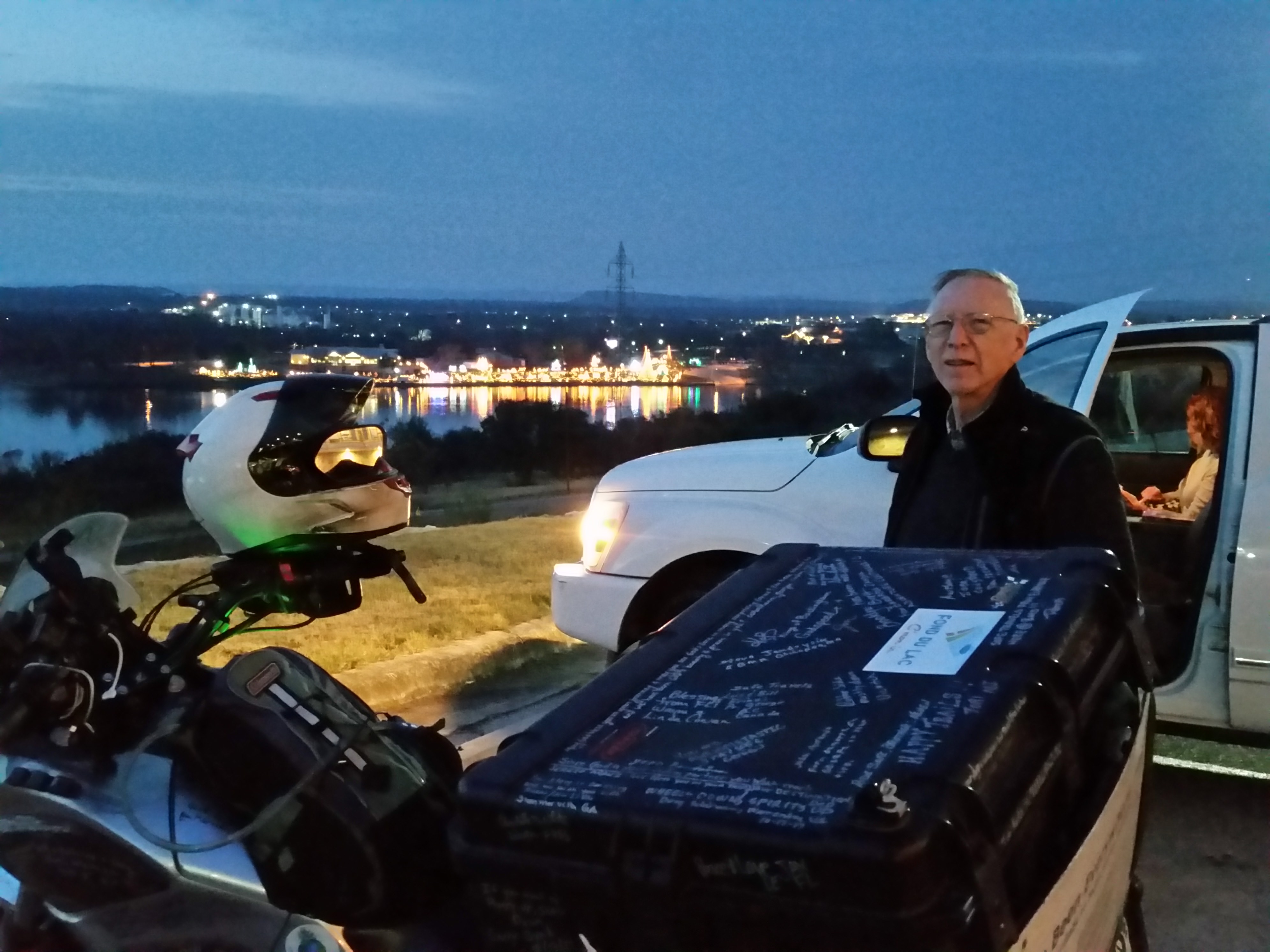 We did not have too many miles to cover this day. Our goal was to make it to Laredo, which is on the Mexican border. The shorter drive meant that some other business items could be attended to.

We lingered at the hotel working on our car/motorcycle insurance for Mexico. This is a requirement before being allowed to drive in the country. The hotel let us use their printer and we both got our policies sorted. It felt great to have that taken care of.

The day’s ride began with thick, misty rain. This type is one of the most vision impairing. Thankfully, it mostly let up by the time we arrived in San Antonio.

While passing through the city, there were a couple of items I really wanted to locate. First was a tire sealant. Since I am now running a tube in my rear tire, repairing a puncture on the side of the road is no longer an option (I carry a plug kit and compressor). I don’t know if using a tire sealer will save me from a flat, but it at least gives me some piece of mind. A shop on the north side of town had just what I needed and also gave me a little something extra for Sonic (I’ll write about this later).

There was an sporting goods/outdoor store just up the road. Here I was able to obtain another item I was lacking: A water filter. Acquiring one had slipped my mind while I was home. This will allow me to drink the water in countries with questionable water quality. As it is written: Man cannot live on tequila alone.

The road between San Antonio and Laredo got progressivly more Mexican-ish as we went. There were numerous pickup trucks packed haphazardly with what appeared to be a whole family’s worth of possessions. It made me wonder if some families relocate to Mexico during the winter? There was definitely more traffic heading to Mexico than from.

We stopped for a nice picnic and ate up most of the food that my parents had packed. At this point, we had only gone out to eat once so far. (…and you wonder where I get my frugality from.) 🙂 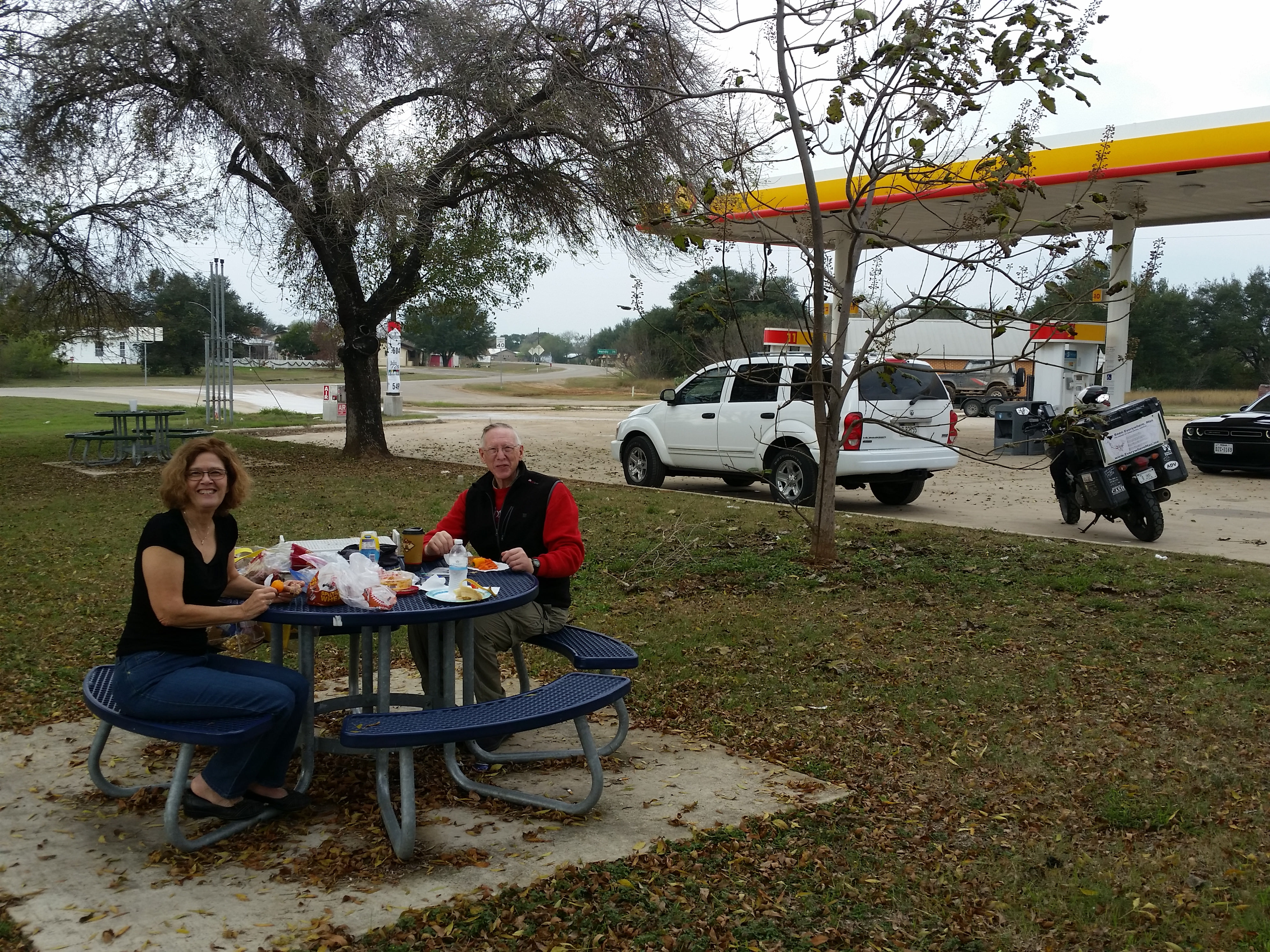 We arrived in Laredo with daylight to spare, giving us enough time to take care of some other business. My Dad’s insulin pen was not functioning properly. Getting a replacement ended up being a 3+ hour ordeal. Even though his pancreas was covered in cancerous tumors, was getting rid of half of it really the right decision?

(After reading this to him he said, “It seemed like a good idea at the time.”)

I used the time to go get some dollars changed into pesos. I wanted to have a handful for crossing the border.

We have our pesos ready! Tomorrow morning we cross the border and make our way to Monterrey. #everywhereman pic.twitter.com/h1IJtAuF1v

We woke up around 5:30am and did some final planning. We ate the last of our pepparkakkor, the Swedish cookies we make for St. Lucia Day. 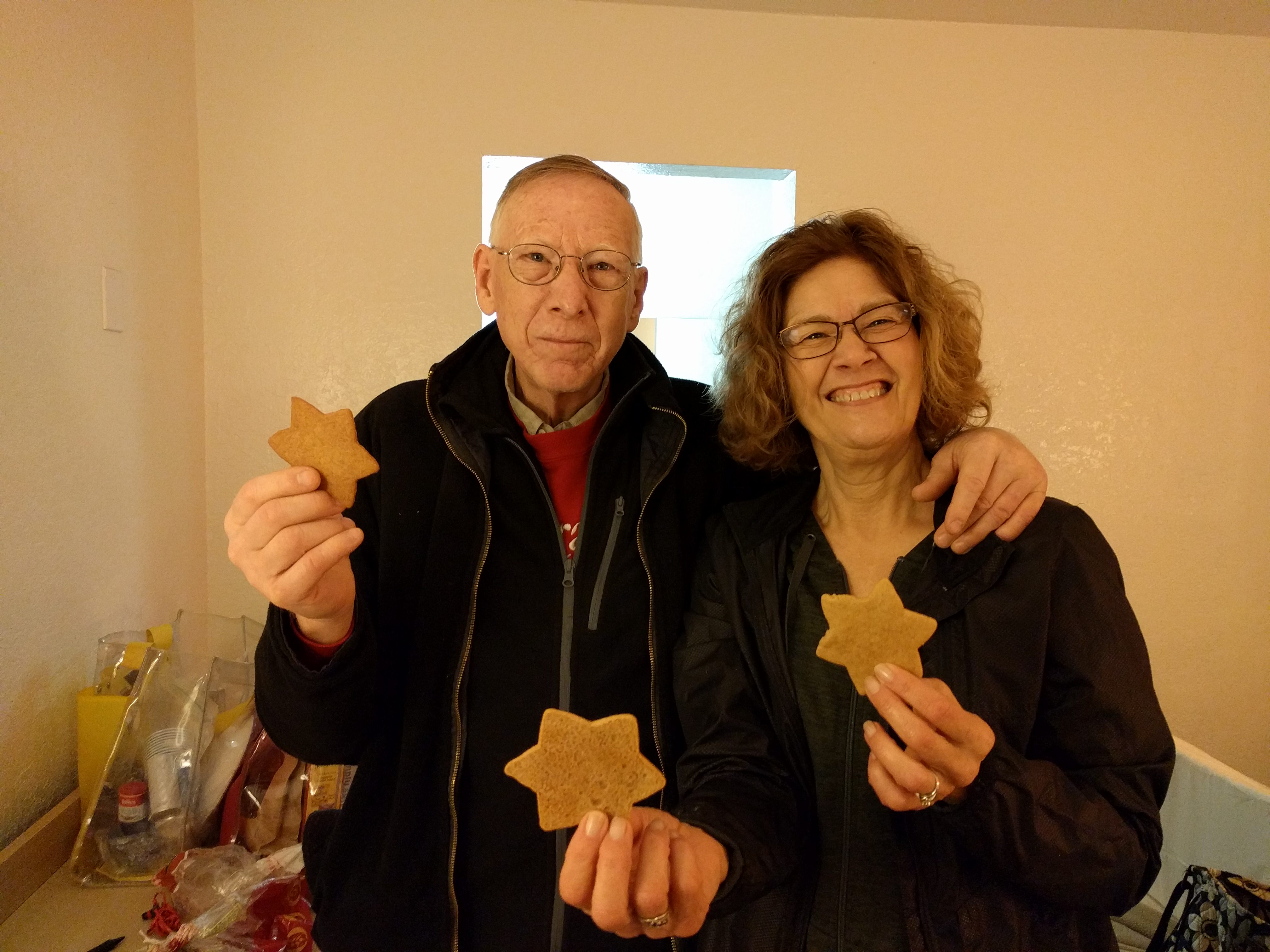 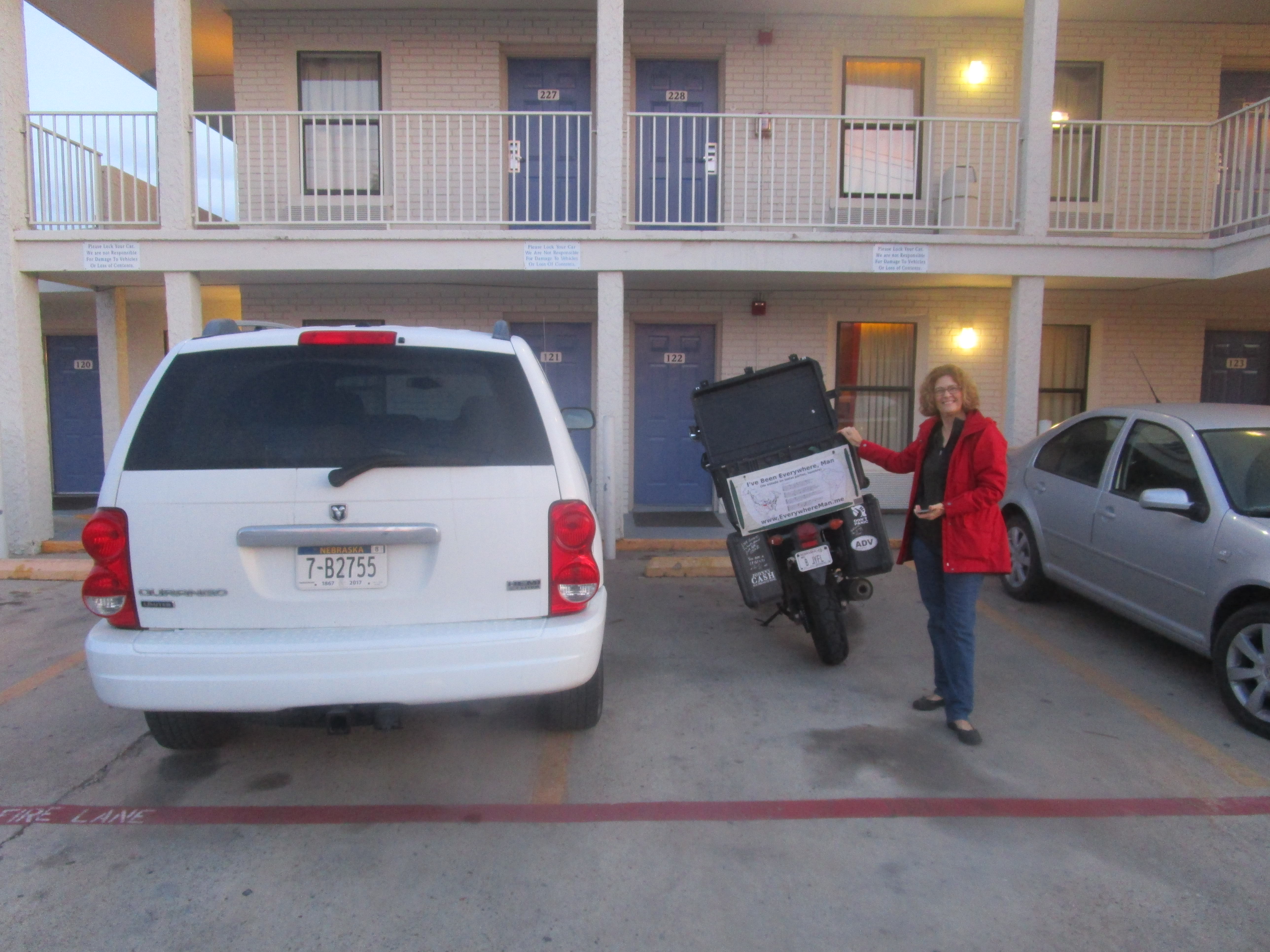 I’m going to leave this post there for now. Next time, I will explain the process of our border crossing. It may take a few steps. 🙂 It’s a little tough getting back into the swing of writing again. I’ll find my stride again soon. Merry Christmas, everybody!

Realtime update: Chilling in the Hotel Monterrey Macroplaza. Having a wonderful time in this city. It’s so great having my parents here with me.

10 thoughts on “Bolt for the Border”