Is it really 2018? Doesn’t it seem like yesterday when the Y2K doomsday was just around the corner? But time will not be stopped and neither will we! Queretaro is one of the most photogenic places I have visited and I had a wonderful host.

I began this year as a fairly regular person, but things changed pretty drastically five months in. Regardless of what my future holds, 2017 will certainly be a year to remember.

I left the tunnels of Guanajuato, heading to the next place on my list, Santiago de Queretaro (usually just called Queretaro). I had originally planned to have some time in San Miguel de Allende, a charming city which was on the way. But being that it was New Year’s Eve, I was having a difficult time securing lodging in the city. I decided to just move on to Queretaro. I’ll get San Miguel next trip.

Queretaro is a modern city with an admirable history. During the colonial period, it was one of the few places where Europeans and Indigenous People lived in harmony. They even had a similar standard of living.

One of the things that I was most excited to see was the city’s aqueduct. This engineering marvel was built in the early 1700s and stretches over 3/4 of a mile. 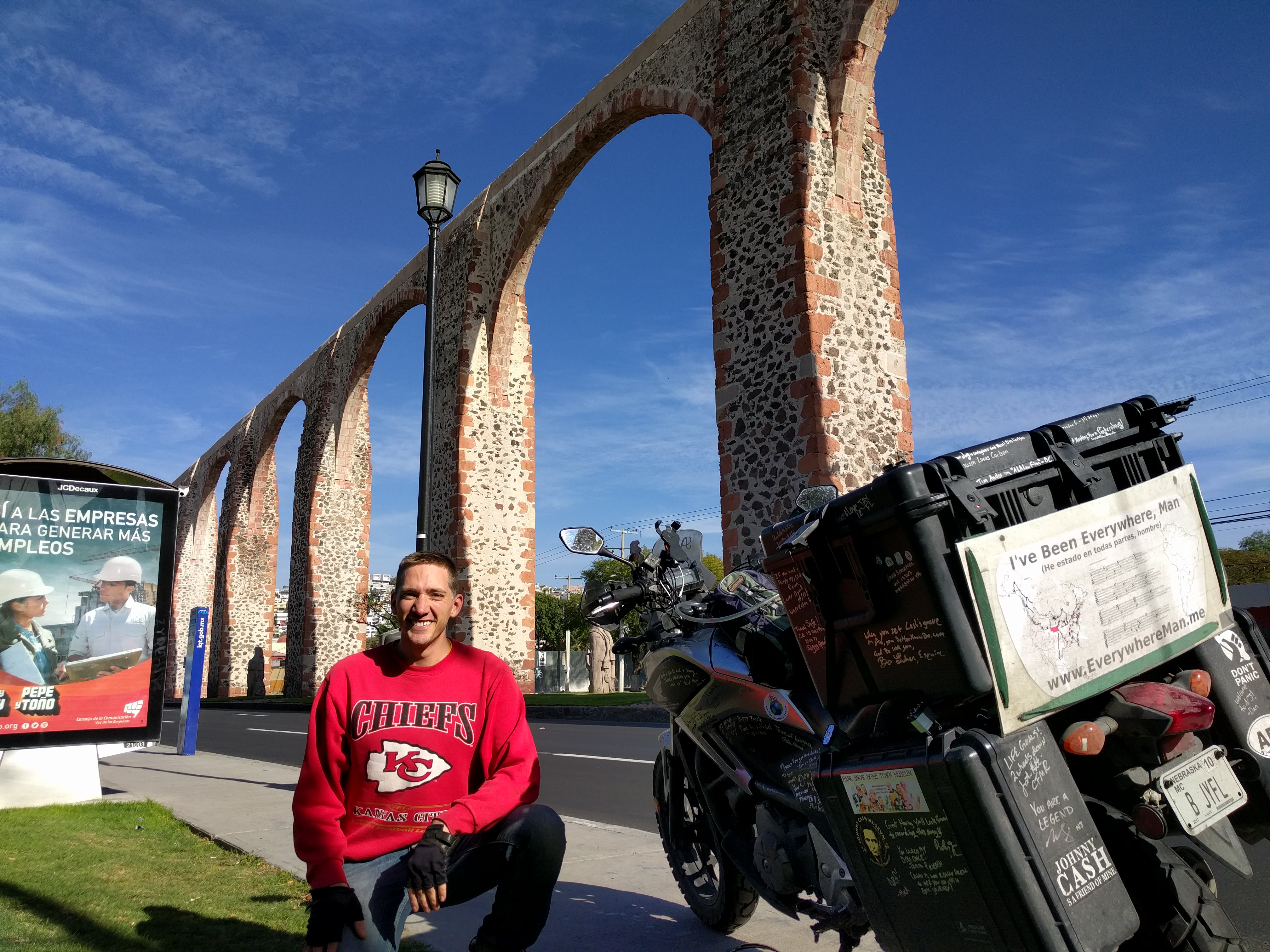 I’m not necessarily attracted to architecture, in a general sense, but when it is something that is so utilitarian, I seem to be much more interested. As much as I love grandiose churches and cathedrals, they’re not really practical, are they? (and that’s coming from a crazy Jesus person) Engineering feats that serve a tangible purpose just resonate more purely with me.

The aqueduct still runs down the middle of one of the main streets. It is truly a sight to see.

It was also an obvious sense of pride among the community. Every time I told someone that I liked it, they were able to quote its age and specifications immediately. 🙂

After the previous night’s fiasco in Guanajuato, I wanted to make sure my place for this evening had parking included. I found a guest house called Margaritas Eco Haus, which advertised secure parking. It was just over $11/night.

I met my host Enrique and I could tell right away that we were going to be friends. He spoke English really well, but asked if I wanted to continue in Spanish as he was getting me set up. I always appreciate having options. One of the first things to catch my eye was his motorcycle, a BMW G650GS. It is a similar size and set up to Annie. 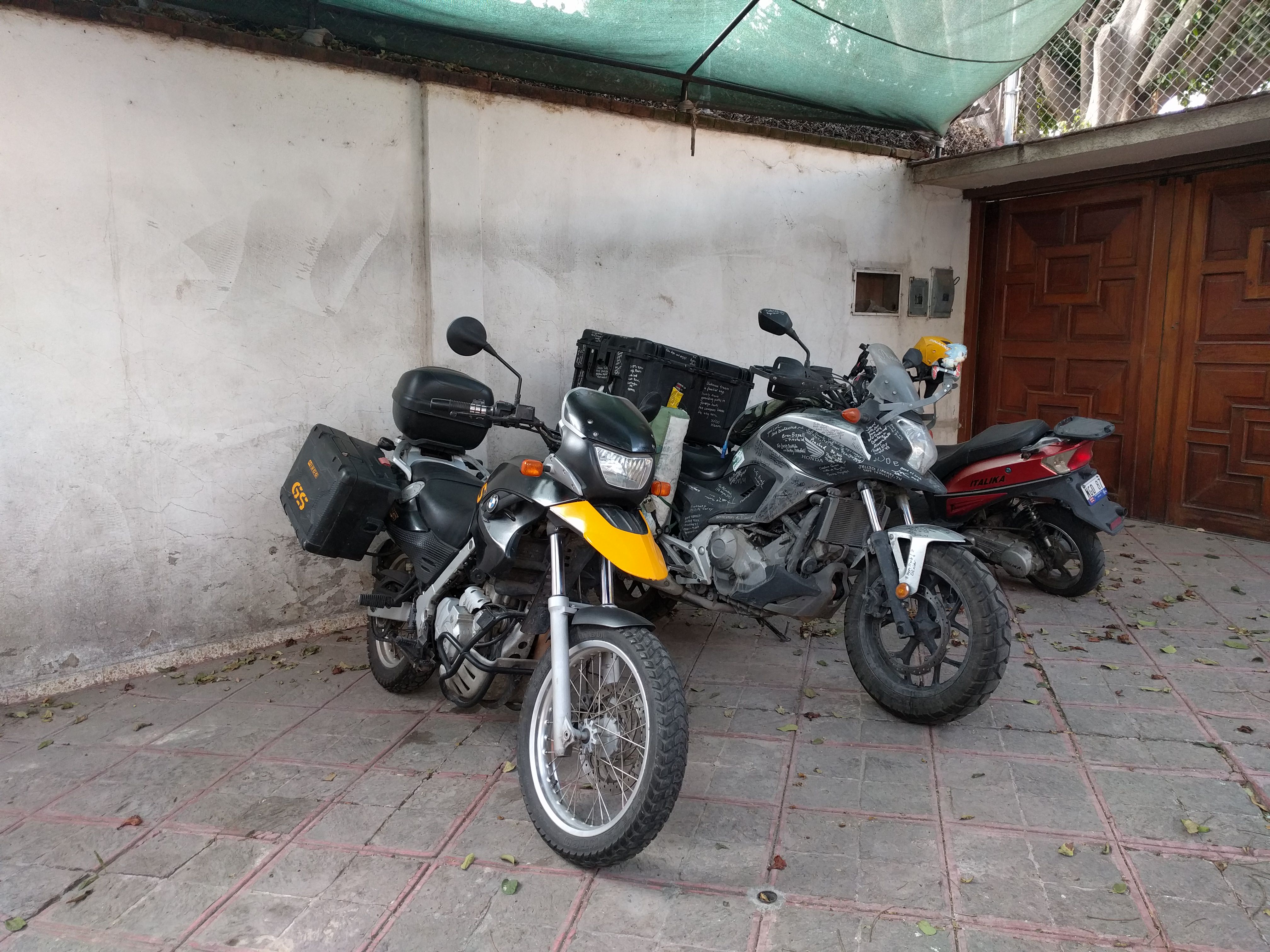 The place felt like home almost instantly. They even had a view of the aqueduct. 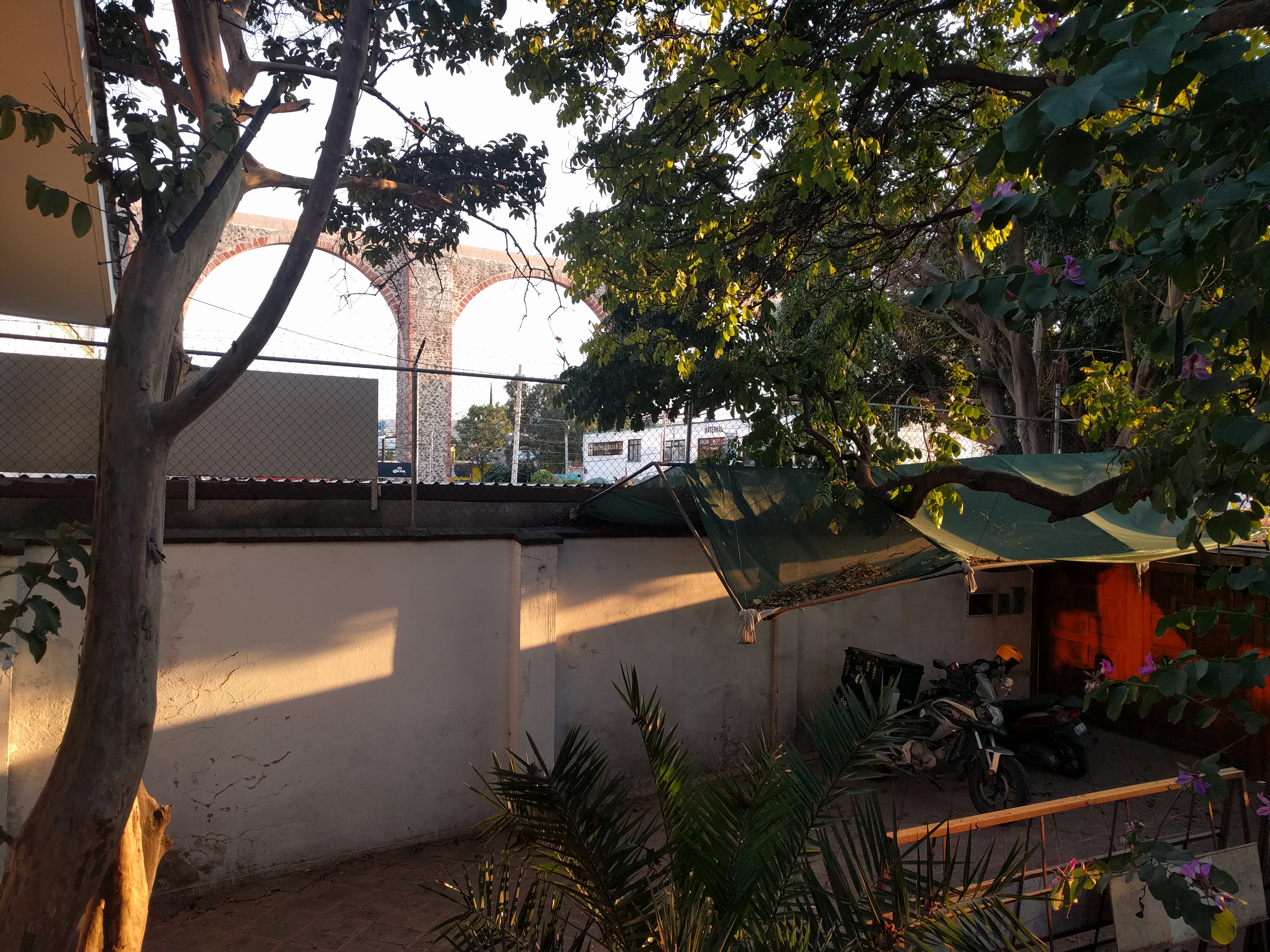 I met a nice young couple who were staying in the double room and I was lucky enough to have the dorm room to myself. I’ve really lucked out with these so far.

Enrique invited me to have supper with his brothers, Jorge and Hector. His brothers didn’t speak much English, but we still found plenty of things to talk about.

Later that evening, as I was doing some work and streaming the Chiefs game, Enrique approached me with a proposition. He told me that he had about one week free until he would be beginning a new contract at his job. He had thought of taking a trip on the bike, but didn’t really want to do it alone. He asked me how I would feel about him joining my trip for a week or so.

I told him “no thank you” since I am already perfectly proficient in Spanish and definitely don’t need any help, assistance or companionship in this part of the world.

I told him that he would be more than welcome on the journey. He had some planning and business to take care of, so I decided I would stay there a second night and we would leave the day after. Cool.

But the night was still young. It was New Year’s Eve, so I almost felt a bit of compunction to go out and at least walk around a bit. Generally speaking, it’s probably not a good idea to venture out at night in Mexico and head towards the sound of explosions. However, that’s exactly what I would be doing. Queretaro holds the distinction of being the safest city in Mexico and I was pretty sure the explosions were just fireworks.

I began walking towards the main square, but just found myself continuing to take pictures of the aqueduct. 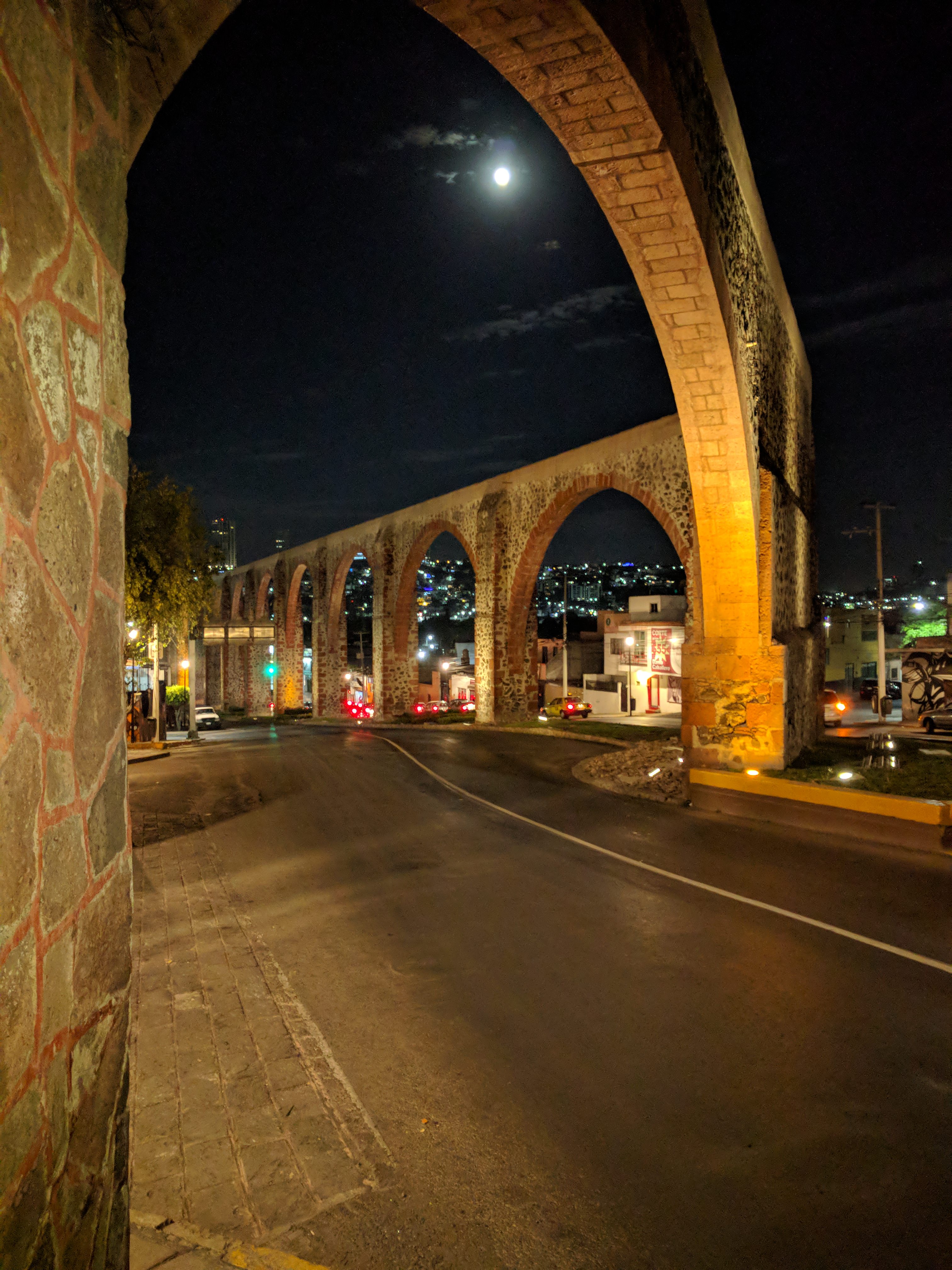 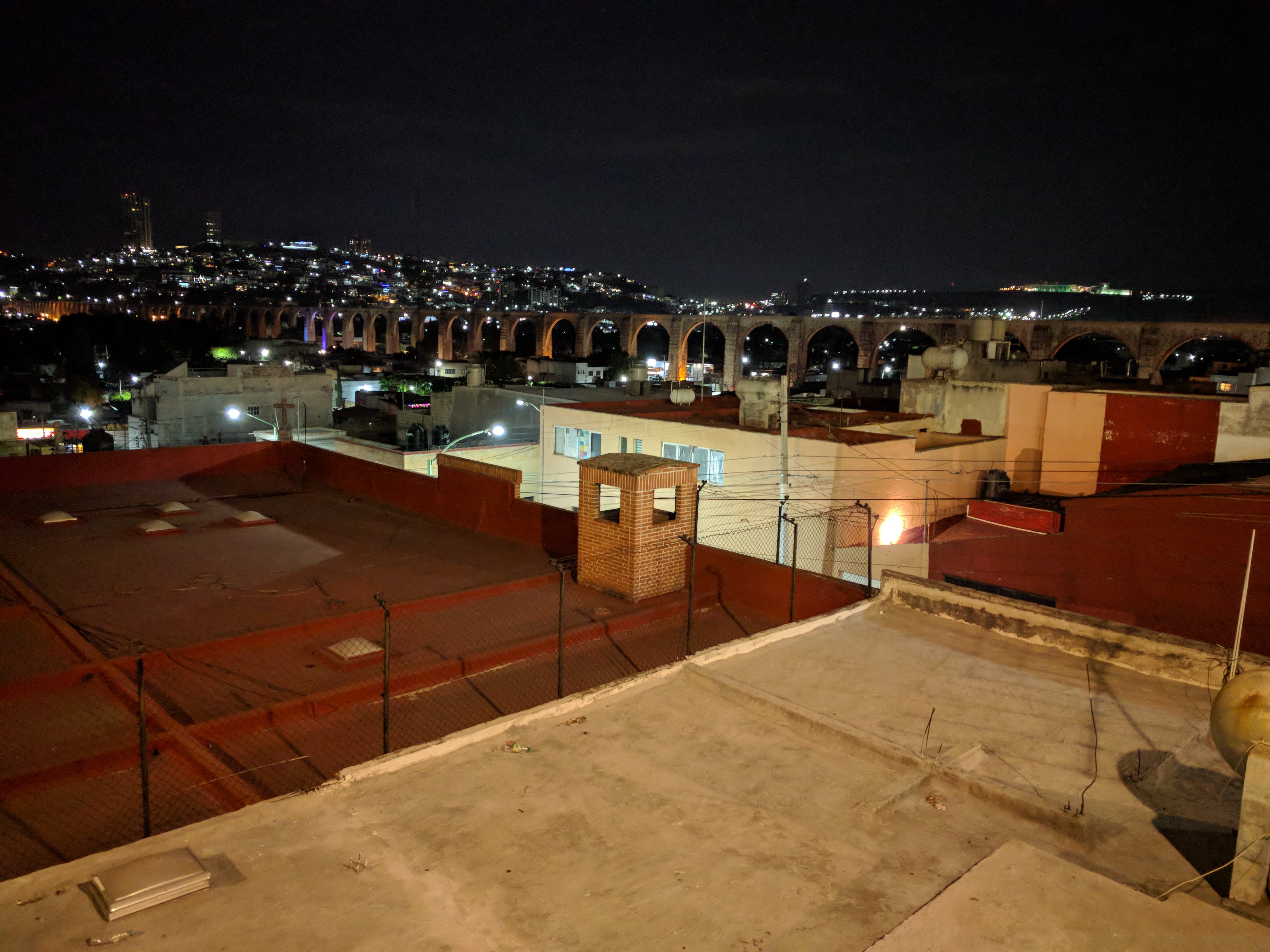 I eventually reached the church and monastery of Santa Cruz and the Founder’s Plaza. Here there were some neat festivities taking place. There was a ritualistic dance taking place, with half of the participants dressed as American soldiers and the other half wearing the garb of Indigenous Peoples. 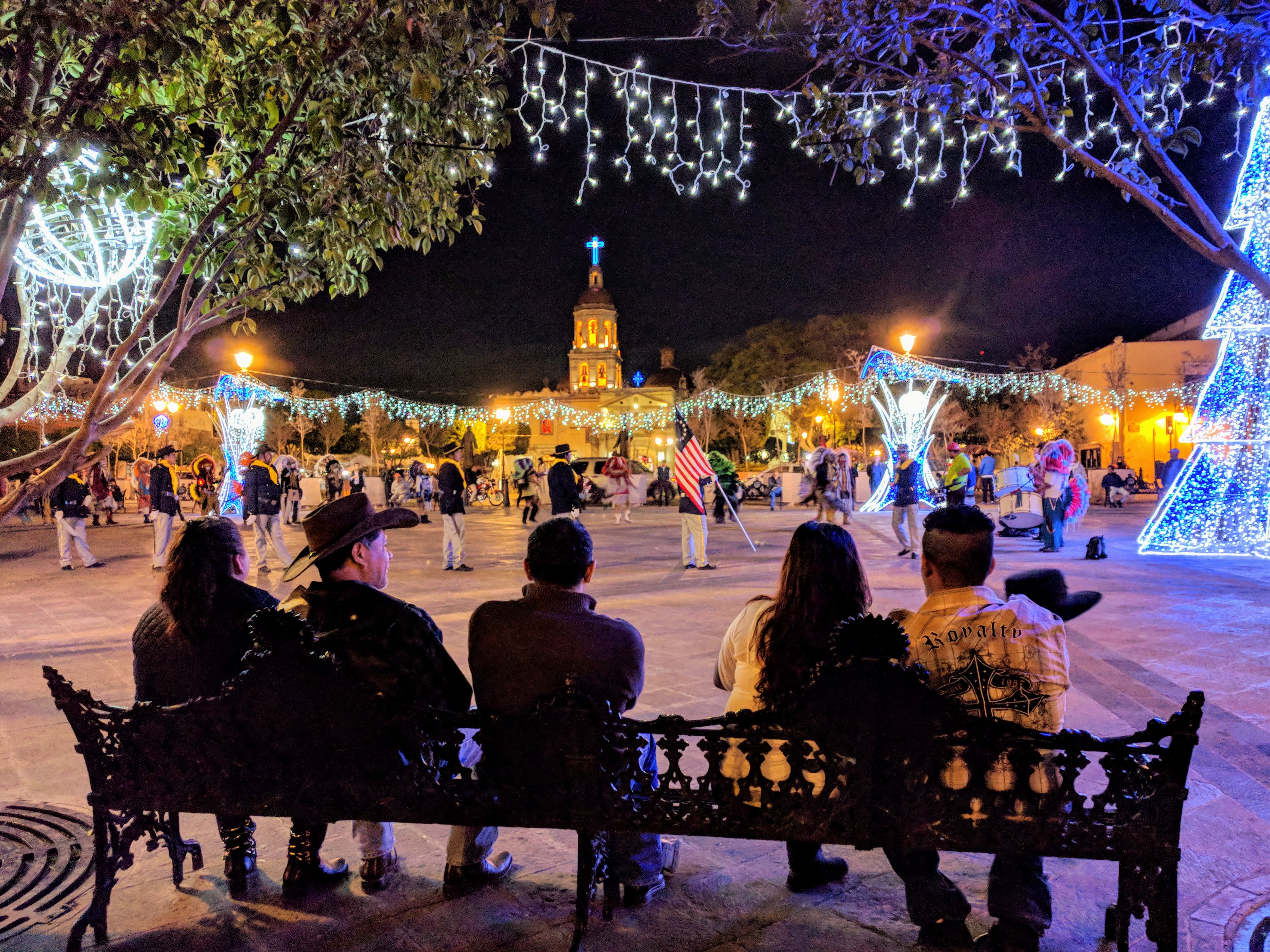 I’m not completely sure who was winning, but I don’t think the Americans were the good guys.

I wandered down to the center of the city, which was really busy. It felt like half of the city was out in the streets. Music, dancing, vendors, it was quite a party.

Another Neptune Fountain. A little smaller than the one in Monterrey. 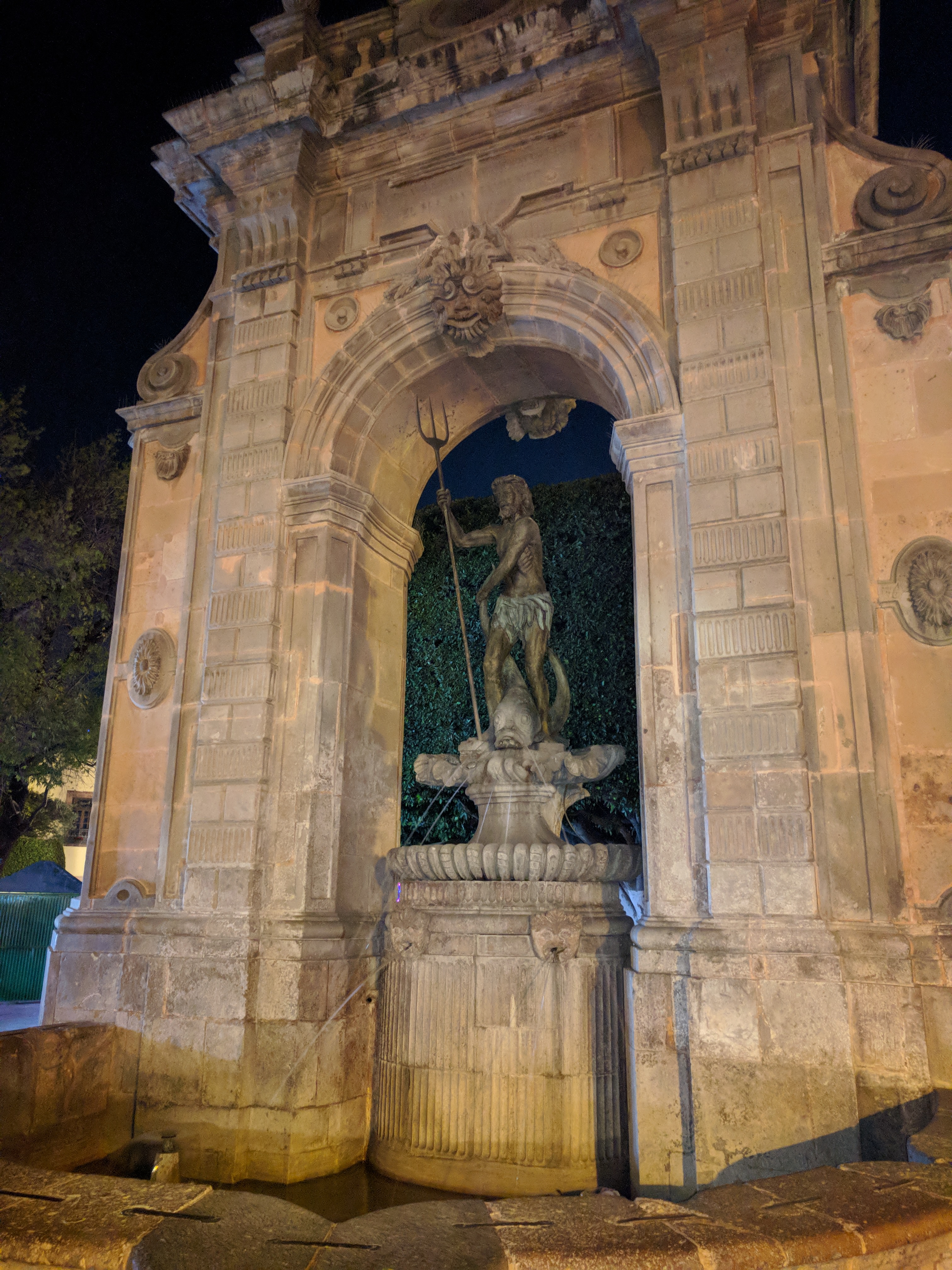 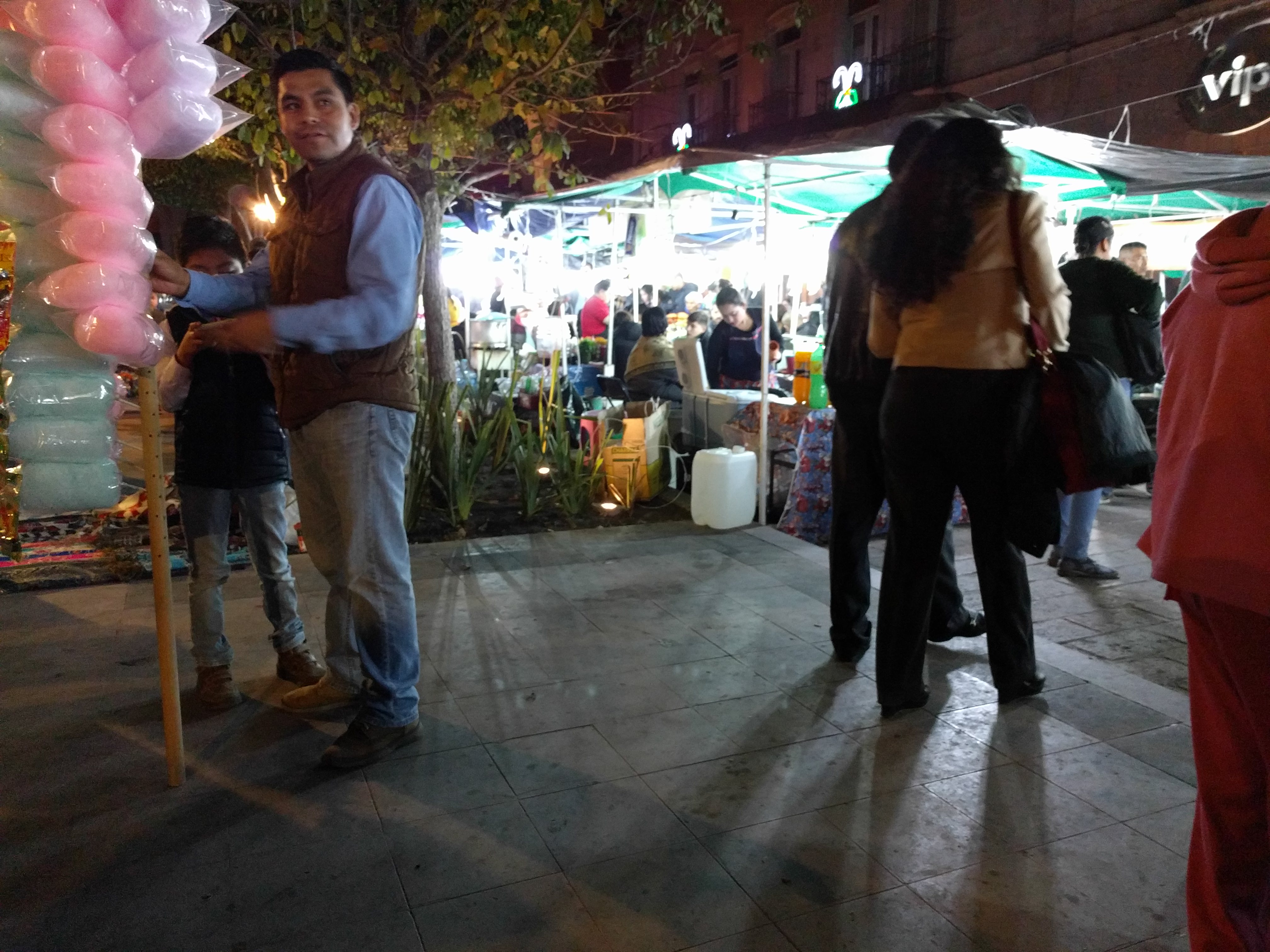 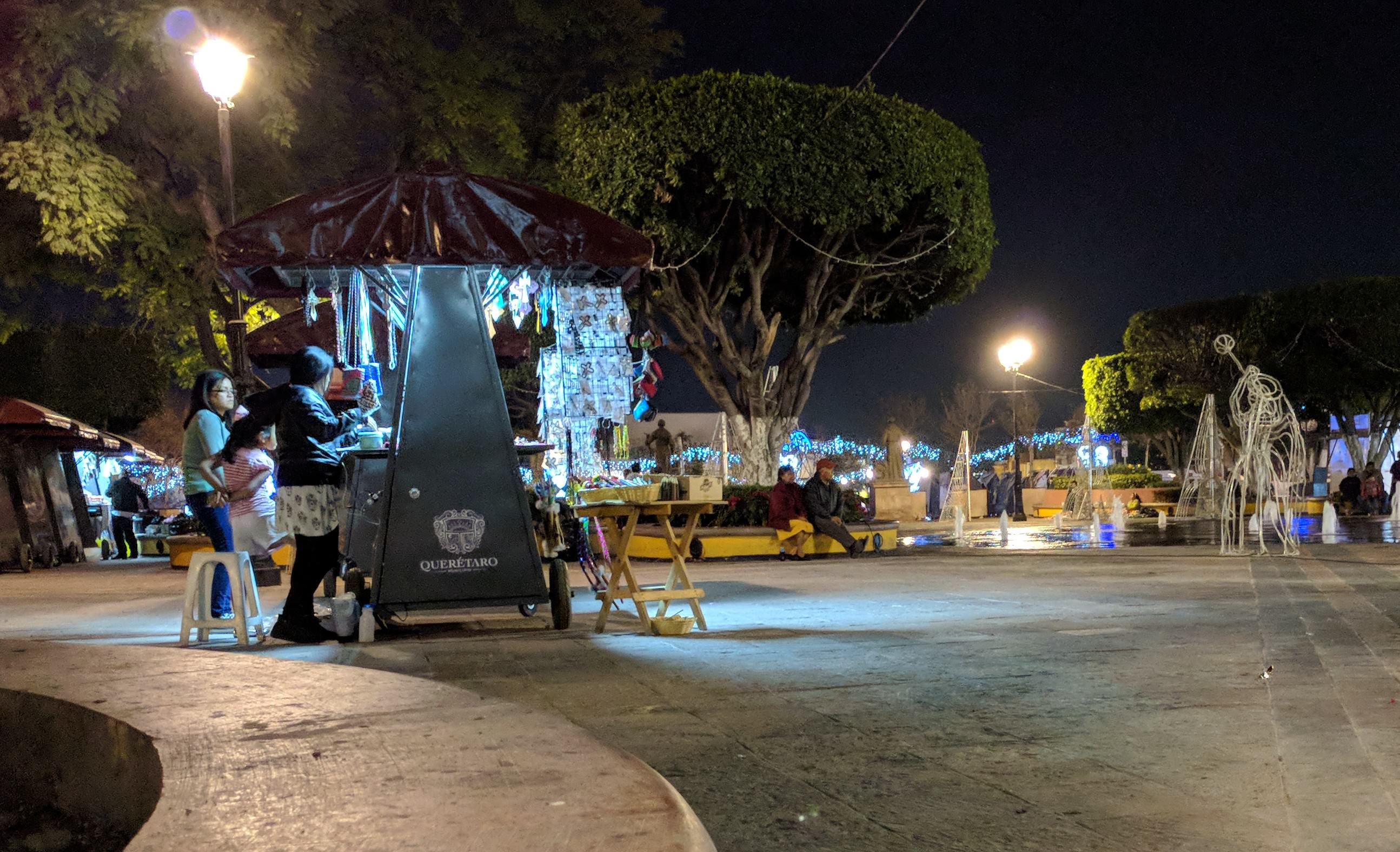 I haven’t encountered much pushy salesmanship so far, it is more just patient offering. On Christmas Eve in Monterrey, we could see a balloon salesman from our window. Even as the streets became devoid of people and the evening wore into night, he continued to wait patiently for customers. My parents and I began to wonder: When is he going home. I almost went and bought a balloon from him just because I so admired his patience.

Perhaps these are strange observations to note on a night when I should be living it up. I’m not sure why these things stick out to me.

Feeling like I had fulfilled my human obligation of celebrating New Year’s, I returned to the house and was in bed by 10:30. Ear plugs helped mitigate the war zone sounds. 🙂

I don’t really have any resolutions, I guess. I do need to get back into shape, but that will have to wait until real life resumes. Maybe I should eat fewer beans, but they are just so darn efficient. I guess I can resolve to never again overtighten my rear axle nut, stop skinny dipping and to photograph no more giant lumberjacks. Those sound like achievable goals. 🙂

I had a chill day, but there was one thing on my agenda that was an absolute requirement. I had been putting it off for a couple of weeks.

Seeing the new Star Wars! In all of my business, I was really late to the game. I’ve been dodging spoilers like I dodge topes. I was able to find a theater that was playing it in English with Spanish subtitles.

I’ll need to see it a few more times before giving a comprehensive review. My first reaction is that it was a mix of wonderful action sequences and questionable plot points. Additionally, like any Star Wars movie, there was not enough Chewbacca. He’s the true hero of the galaxy.

Enrique’s place was really starting to feel like home. 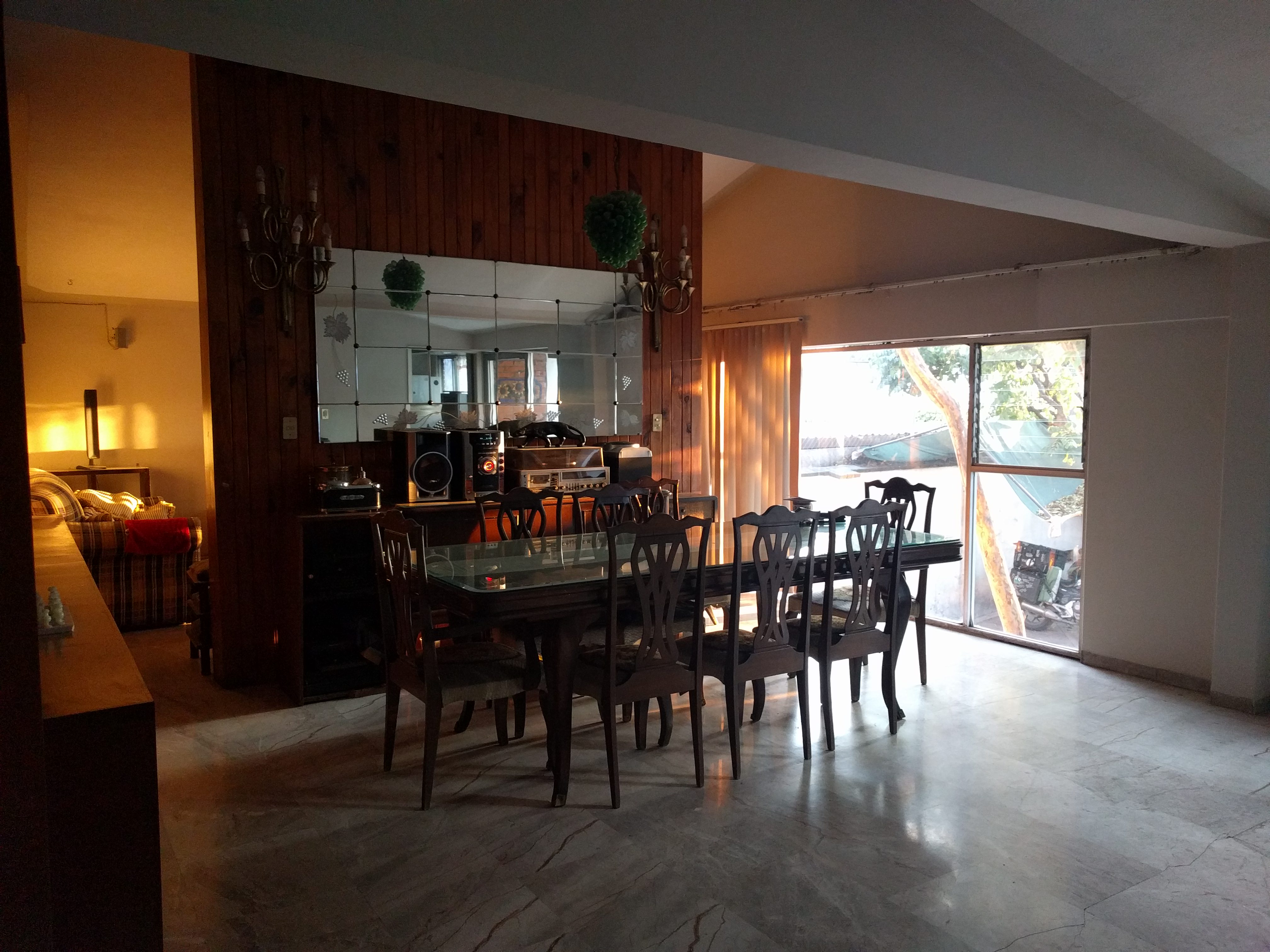 I took another little stroll around the city, taking some daytime pictures of the aqueduct this time. 🙂

There was a service taking place outside of the Santa Cruz church. I understood….. some of it. 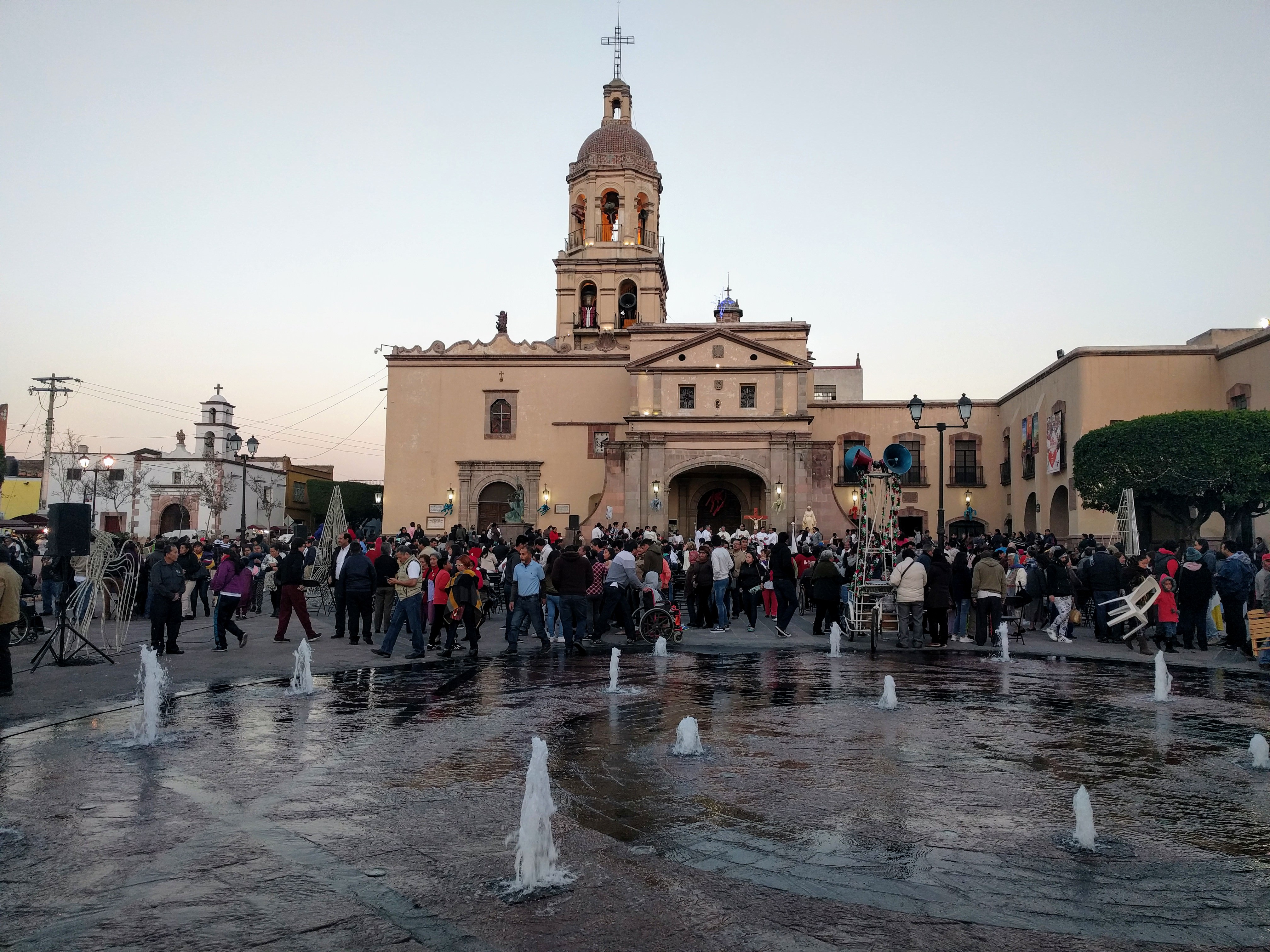 Back at the house, Enrique had some bad news for me: He would not be able to join me on my trip. 😦 He just found out that his girlfriend was coming to town to surprise him for his birthday which is on the 3rd. I guess that’s a pretty good excuse. 🙂 He was apologetic and seemed disappointed to miss out.

I was fortunate enough to have the room to myself for a second consecutive night. I slept really well once again.

I had a couple of missions before leaving town. First, I had noticed that my front brake pads were wearing a bit thin. I wanted to see if I could find a replacement while I was still in a large city. Second, I needed to get some good coffee grounds for my french press. The coffee in Mexico (mostly instant) has not impressed me so far.

I rode to the Honda dealer in town and walked up to the desk, promptly forgetting the word for brake pads (“balatas”) that Enrique had taught me. The guy behind the desk came out and looked at Annie and spent some time on the computer. He said they would be about $60, but it would take 4-5 days to order them. Unfortunate. Still, he wrote down the part number for me in case I wanted to try other shops.

I walked to a local coffee shop which was closed. But just up the road, there seemed to be another local place called El Starbucks. They had some English in the store, so maybe they are thinking of expanding to the US soon. 🙂

I realized pretty quickly that I had no idea how to explain that I needed coarse grounds for my french press, but I came up with the phrase, “No es como polvo.” (“It is not like dust.”) This got my point across and I left with some perfect grounds.

Back at the ranch, Enrique and I took care of the normal formalities: Signing and pictures. 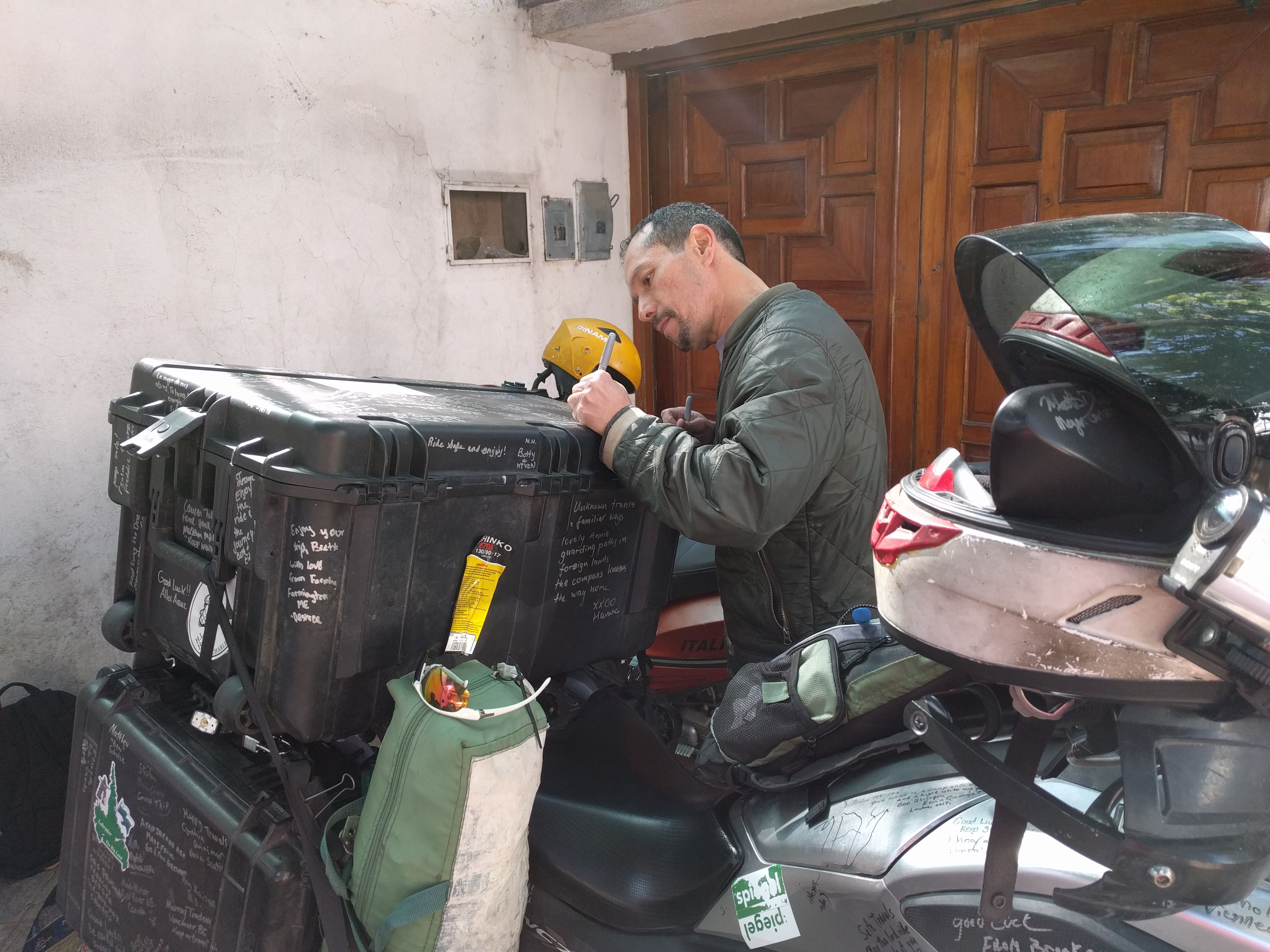 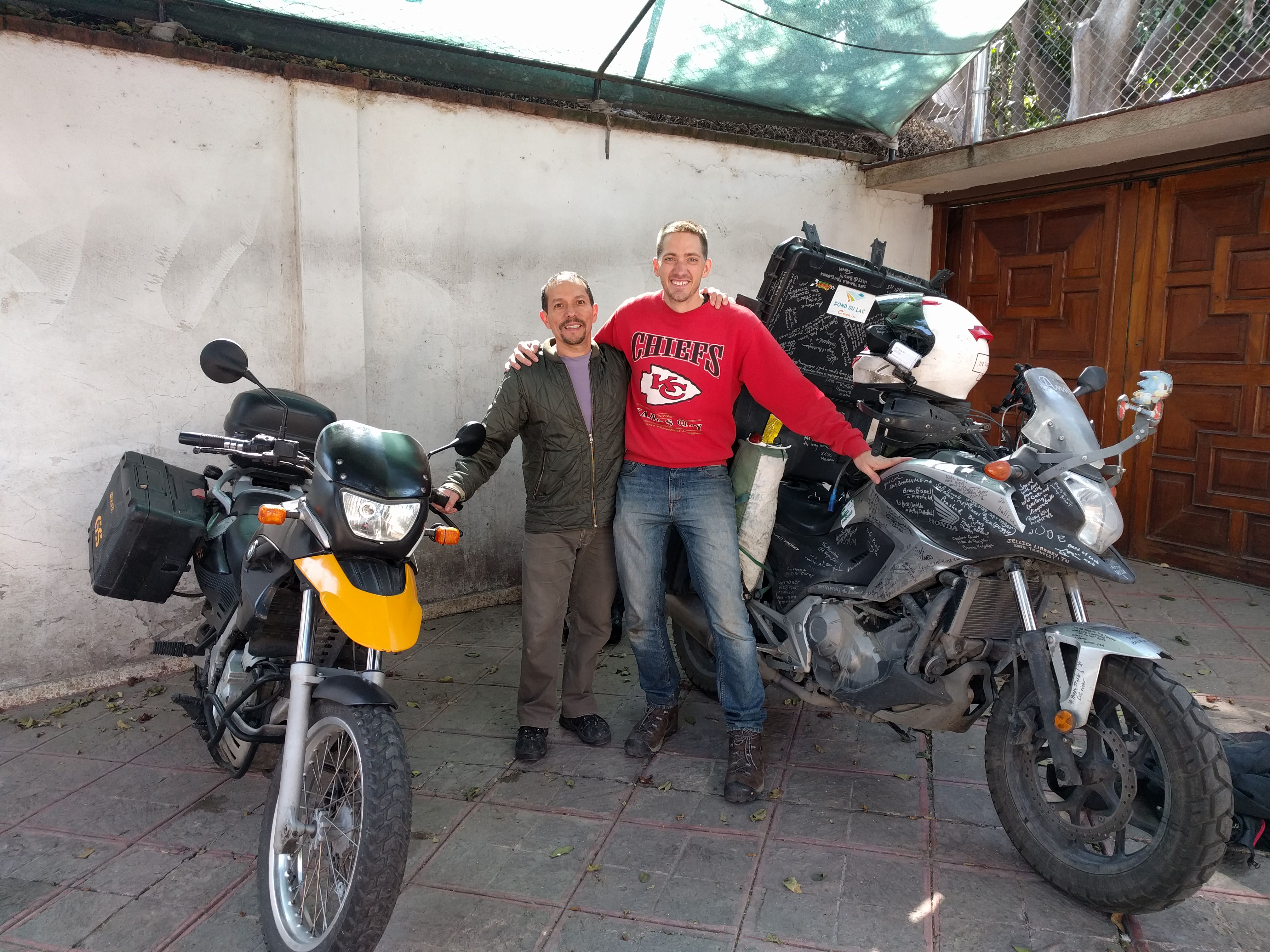 Before I left, he tried to help with my brake pad issue and called a local bike shop. They thought they could match the pads, so we rode down there together. Having his help to explain exactly what I needed was an absolute godsend. I must confess, I did not catch much of the conversation he was having with the guy behind the desk. We eventually found some pads that would fit, but the clerk was not very complimentary of the brand. He asked me how fast I normally ride.

When he told me the price, 90 pesos (less than $5), I almost got a little worried. Still, I needed the replacement and figured that going with these would be less of a risk than wearing my current pads too far.

Enrique with my new “balatas” 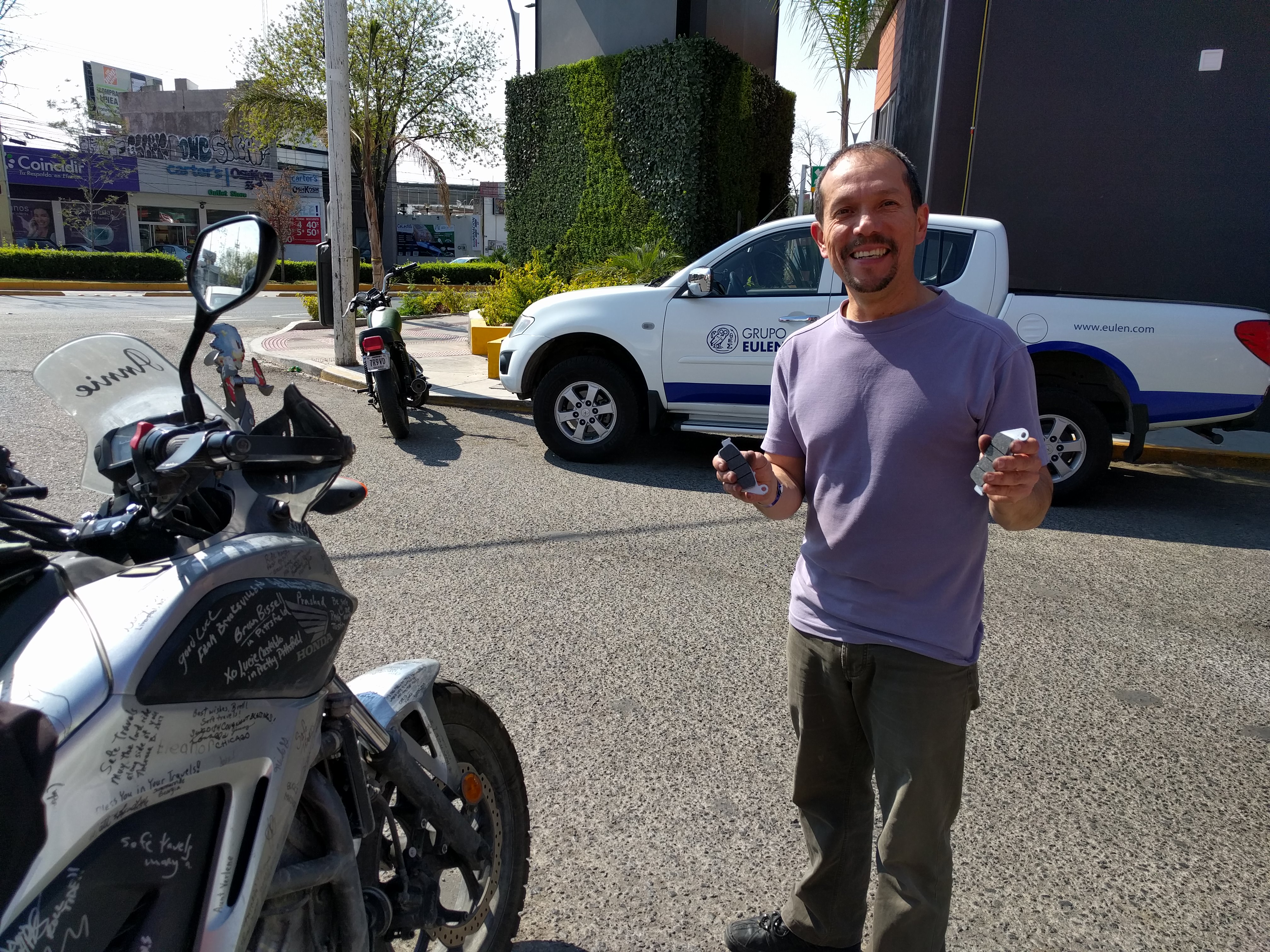 He provided some extra hands during the installation process and we had them installed in about five minutes.

As we worked, I asked him if he would like to join me on the trip just for today. I already had a room booked for the night that had two beds. He thought about it for a bit and couldn’t seem to find a reason not to come. We returned to his house so he could pack a bag.

Happy New Year, everyone! I hope 2018 brings you health and happiness. I have absolutely no idea what I will be doing at the end of this year, but I know it is going to be one to remember. As always, thanks for coming along on my journey.

Realtime update: I am going to be leaving Puebla in a few hours and head towards Oaxaca. I don’t think I’ll make it there tonight so I’ll probably find lodging along the way. I’ll maybe get to use my tent again. 🙂

12 thoughts on “A New Year in Queretaro”