Katrina and the Waves wrote this song with the obvious intent of helping people pronounce “Oaxaca.”

In other news, everything you read on the internet is true.

“Ok. My friend with the hatchet, Feliciano, didn’t get me. This spot should be OK to camp.”

I was a bit chagrined that after months of successful stealth camping in the US and Canada, I had been stumbled upon with minutes of my first attempt in Mexico. Apparently I will need to develop different strategies for this part of the world. But it’s OK, I wasn’t the only one there feeling like an ass. 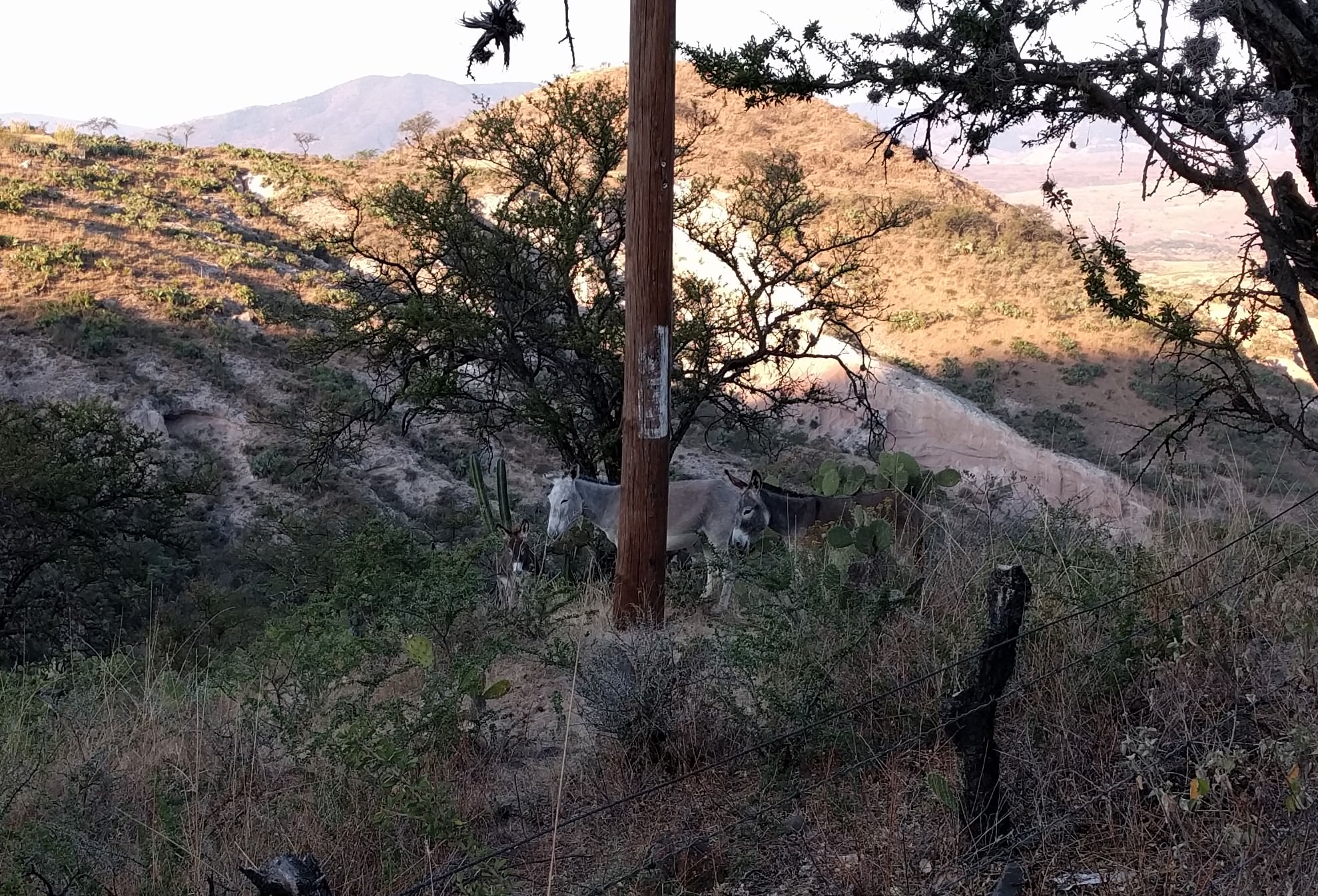 It’s possible that my spot would be visible from the road, so I was waiting until sunset to put up my tent. During my wait, I heard the sounds of a cowbell approaching. At first I thought it was just one of my burro buddies pictured above appoaching. But no. It turns out that my campsite was sort of turning into Grand Central Station.


Yes, a heard of goats was being driven right passed me. The “drivers”, a father and daughter (presumably), didn’t pay me too much notice. I told them that I had talked to Feliciano and he had given me permission to put up my tent here. The father just gave me a puzzled glance and asked, “Duermes aqui?” (You are sleeping here?) 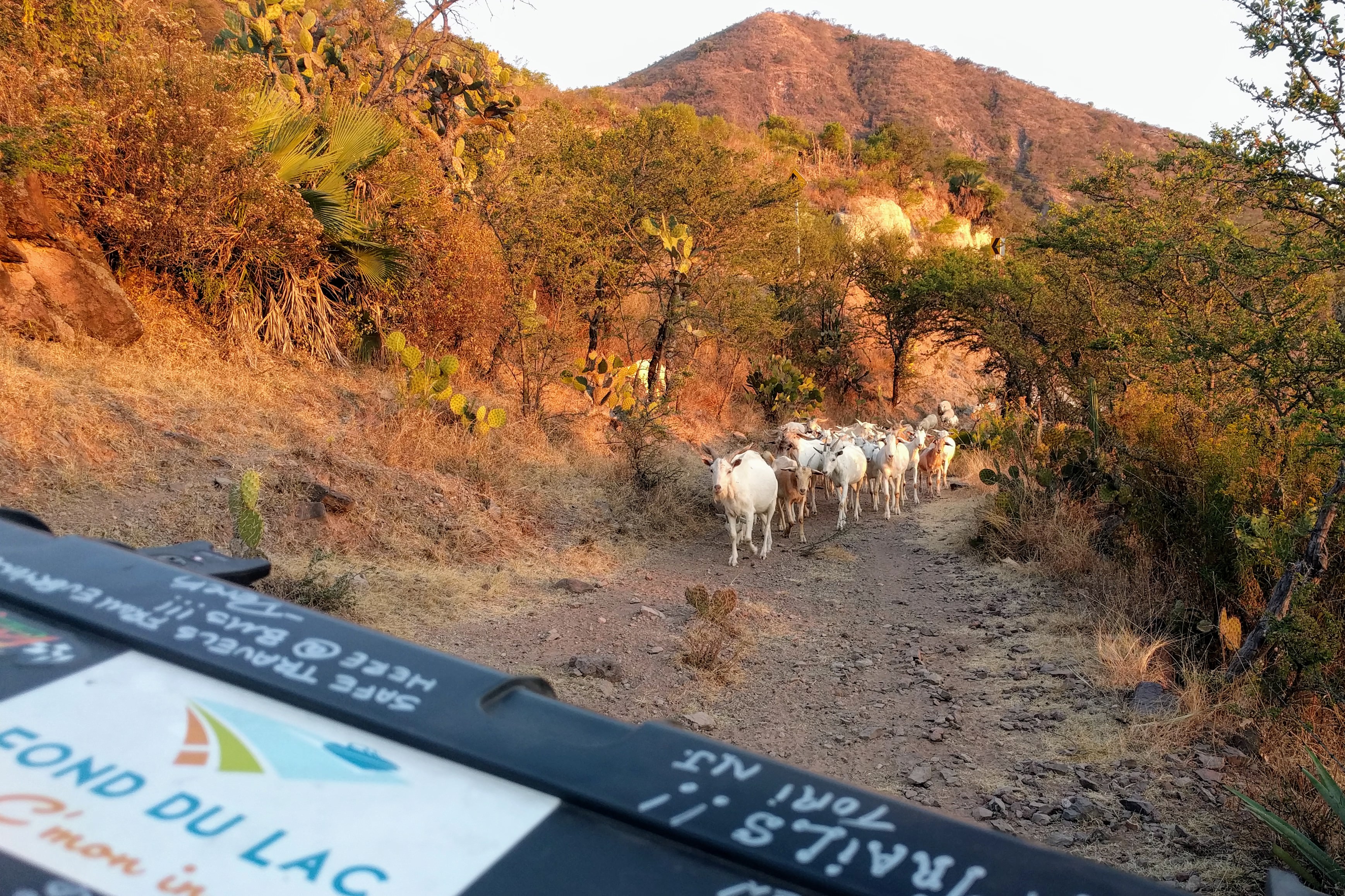 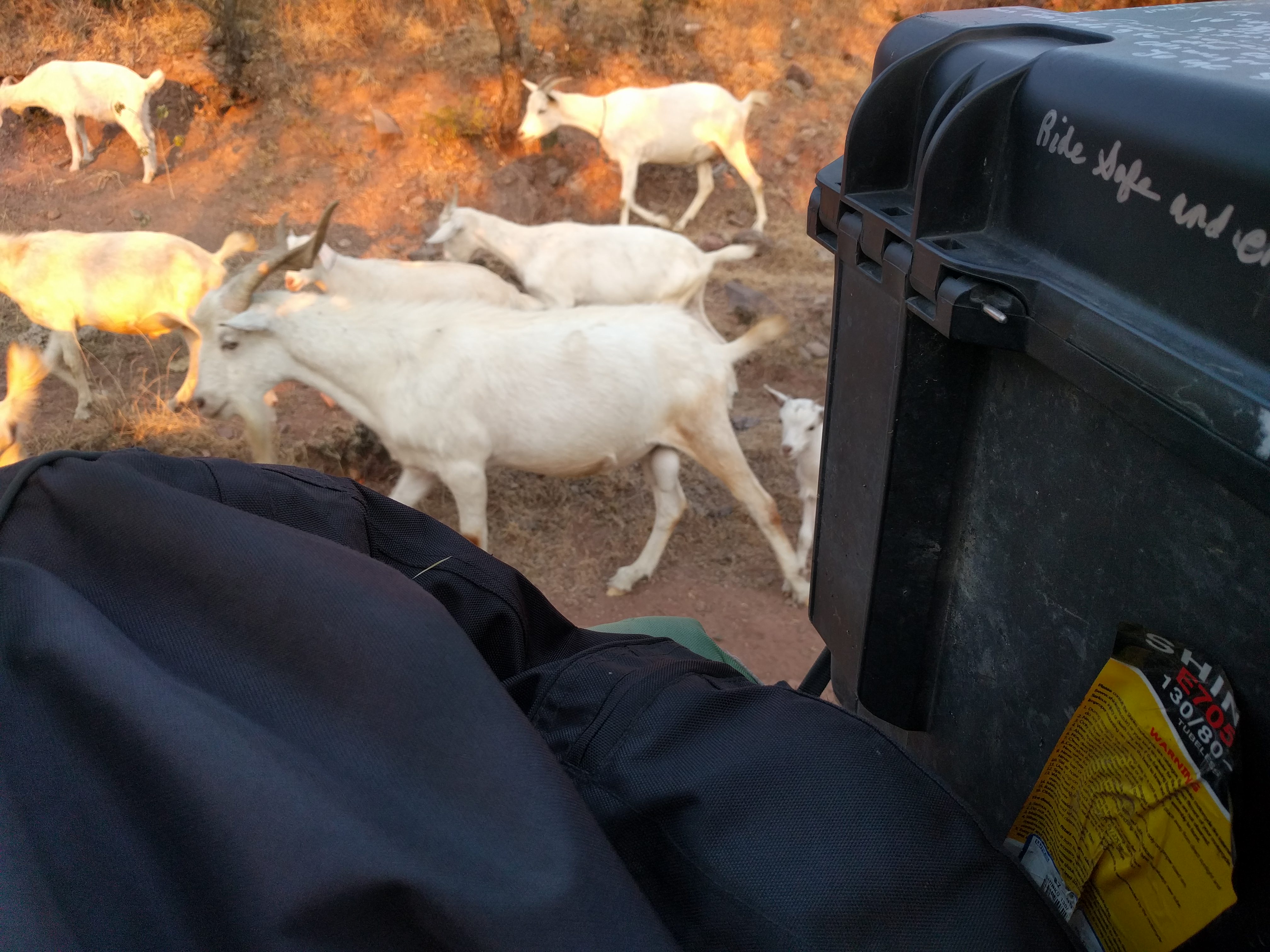 Now I felt that I had a decision to make. There were already three people who were aware of my presence here. Three more than I would prefer. Still, I decided to stick it out in this spot. First, I got to enjoy a nice sunset. 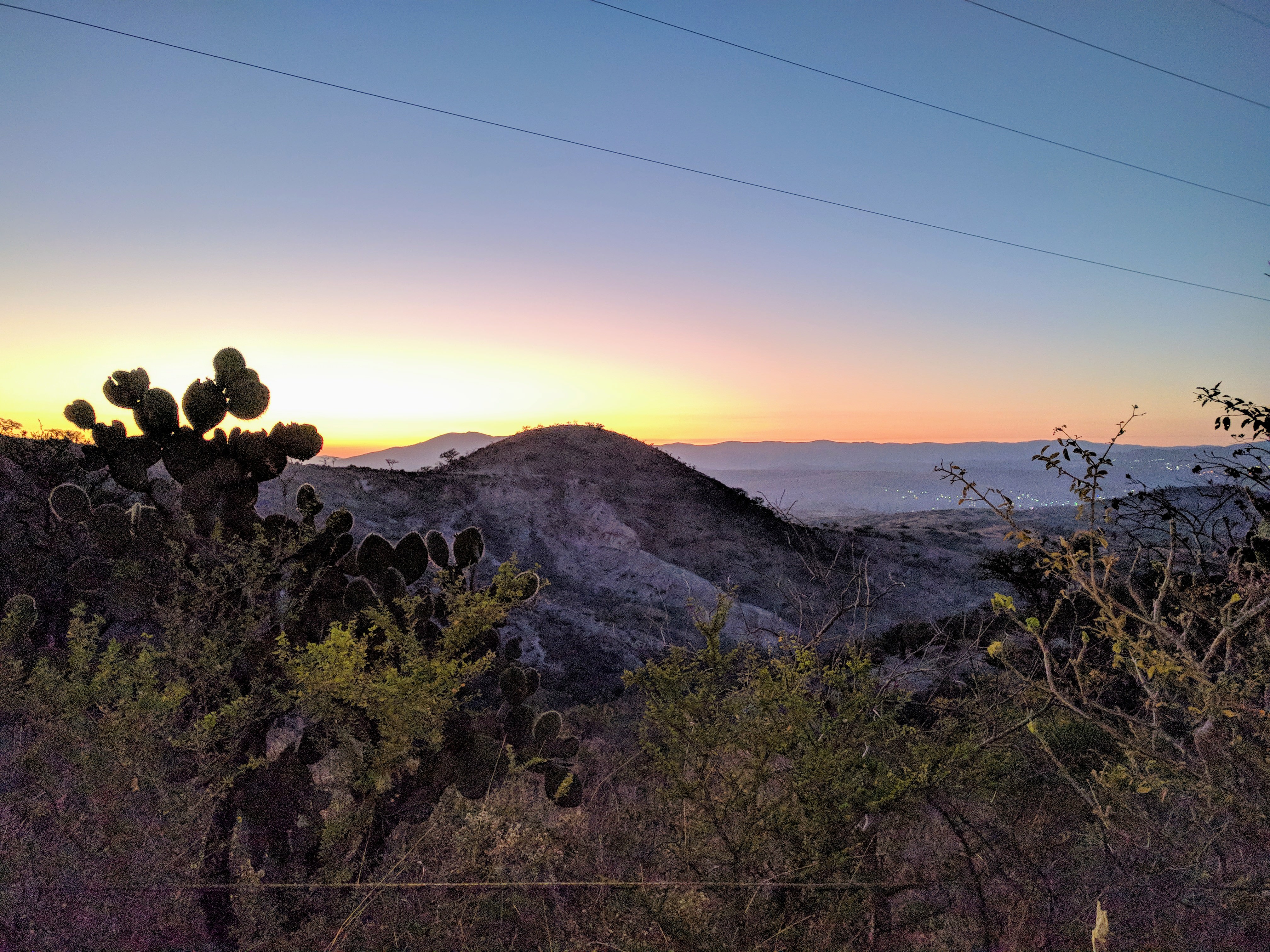 I set up my maroon cocoon for the first time in what felt like an eternity. I ate one of my MREs and turned in, hoping for a peaceful night.

I’m not sure what woke me, but I was up in a start. For some reason I was feeling uncomfortable and could not seem to get back to sleep. It was hard to pinpoint why. About an hour later, as I was still searching for sleep, a stray dog approached my tent.

Now, I don’t think I’ve said much about stray dogs here yet. They are a pretty ubiquitous sight. Being master scavengers, they thrive off of all the trash strewn along the sides of the road. Some of them come up to you with a look of “Oh, I just want someone to love me. Please love me.” Others approach with an attitude of “I am going to take whatever it is that you’re eating. Even if I have to rip your throat out, it will be mine.” Additionally, they’ll sometimes lunge at and chase motorcyclists which is never a pleasant experience.

The stray that approached me presumably fell into the latter category. It continuously barked and growled at me for about five minutes, before getting bored and wandering off.

I was up a few more times in the night and discovered that my sleeping pad must have a leak in it. All told, it was not a great night, but I’d gotten enough sleep to last me a day.

As I was packing up in the morning, an older lady approached me and we chatted briefly. Again, Grand Central Station. Lesson learned, let’s get back on the road.

It was a pretty nice ride down into Oaxaca City. I did pass a spot where it looked like the road had been barricaded in some sort of protest. The skeleton of a burned out bus still obstructed at least half of the road.

They were probably protesting against all of the trash left on the road. Seems a bit counterproductive….

I might just offer a few observations about the state of Oaxaca, as this would be the state in which I would be spending the most time.

As I was doing my research, as interesting dichotomy (wow, that word makes me sound smart) emerged. Oaxaca is definitely one of the poorer states in Mexico, ranking second to last of the 31 one Mexican states. Yet, it is also known as a fairly safe place to visit. The US state department has no travel warnings for the area.

In the US the correlation between crime and poverty is a very strong one. I was eager to see why this did not seem to be the case in this state. Oaxaca City is known for its cuisine and culture. The coastal towns of Oaxaca are regarded as some of the most beautiful and cheapest places along the ocean. Everyone who visits this state seems to rave about it. We’ll see what I do. 🙂

My approach into Oaxaca City took me up to really high altitudes. The road was in good condition, traffic was sparse and curves were plentiful.

Mad trunk respect to this guy:

It was around 3pm by the time I reached the city. I had had very little to eat all day and I was now in the city that is often considered the “food capital of Mexico.” So what did I do? I went to a Chinese buffet, of course. Please don’t judge me. I really felt like tanking up.

I had arranged lodging at an AirBnB on a private street on the east side of town. After stopping in a park to do a little typing, I continued to meet my host at 5pm. But then I waited…..and waited…and waited. I tried calling contacting through the app and calling using WhatsApp (everybody uses this down here). No response.

As daylight began to wane, I knew I needed to investigate other options. I found a hostel called Andaina which was right in the center of the city. It advertised free, secure parking, so it looked like a good option. There was no place on site to park, but I found a place to stash Annie while I inquired within. 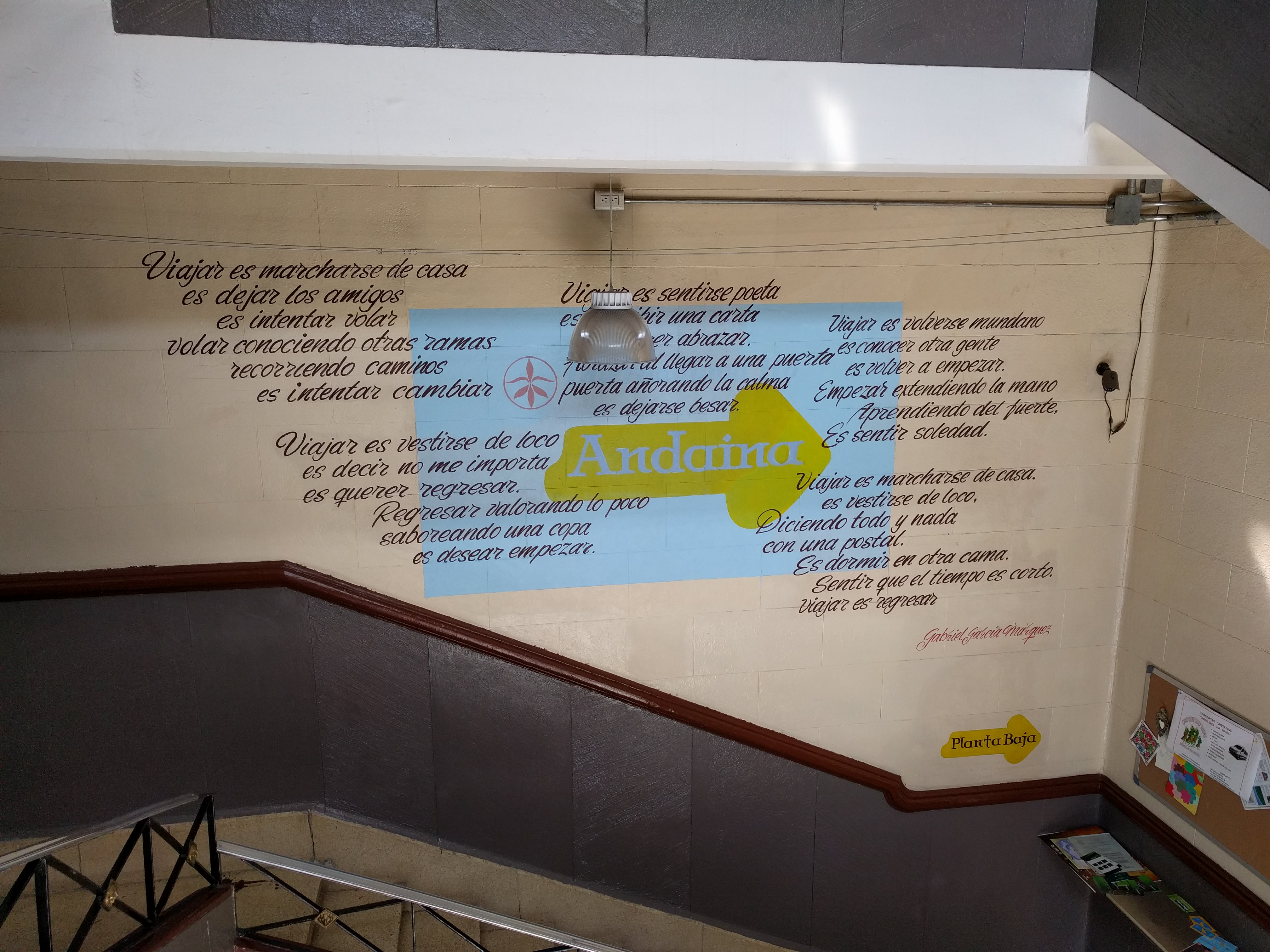 The price was right, about $9 per night for a private room, and the hostel had an agreement with a parking garage about a block and a half away to provide spaces for their clients. I took Annie to the garage and immediately felt very good about my decision. One of the attendants was a tall, blue-eyed hombre named Ramon. We hit it off right away and probably chatted for about 20 minutes. He knew a little English, but also seemed to know how to talk to people that only speak a little Spanish.

An interesting contrast occurred when I walked back to the hostel and spoke with the young lady at the desk about getting checked in. I could scarcely understand a word she said. I thought this was interesting considering the long, in depth conversation that I’d just had with Ramon. Maybe that’s just where I am with my language learning right now.

The rooms were actually of pretty substantial size, especially given the price. The place was really clean and after a few initial hiccups, the wifi was both fast and reliable. Sounds like I might be here for awhile. 🙂 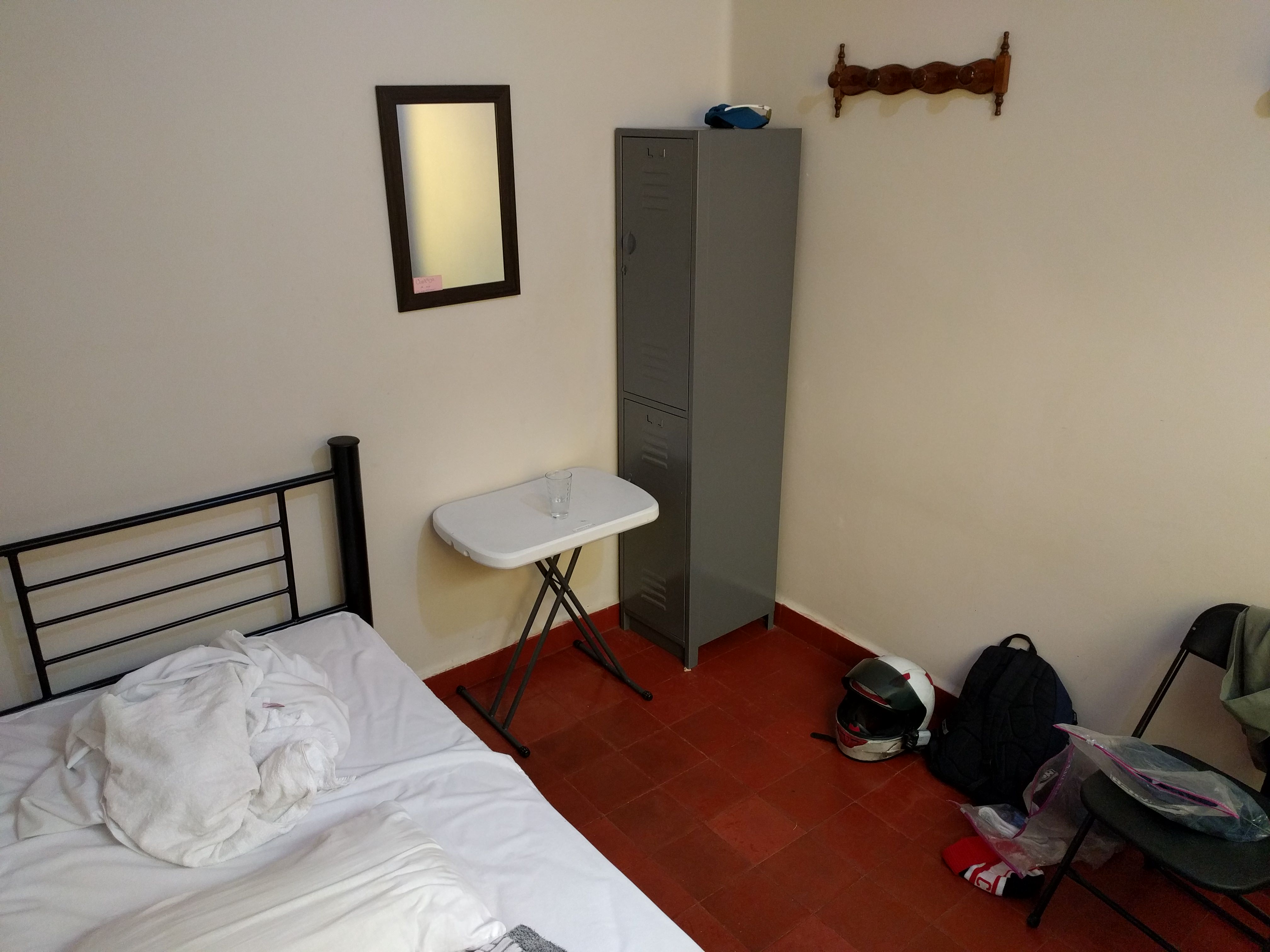 A pretty slow morning. I was planning to mostly have a work day. I ventured out for a walk and stopped by the Mercador 20 de Noviembre (just “the market” henceforth). This market is one that specializes in food, another one focuses on artisans. There were a few things that I needed to try. Firstly, the Tlayuday (pronounced more like “clayuda”). This is  a large toasted tortilla with all sorts of ingredients piled on top of each other. Secondly, I wanted to try a milky hot chocolate. Both of these are Oaxacan specialties.

Inside the market is an interesting place. There are dozens of comedors (in this context, basically just an eatery with a counter with some benches), all of which seem to have the exact same menus at the exact same prices. 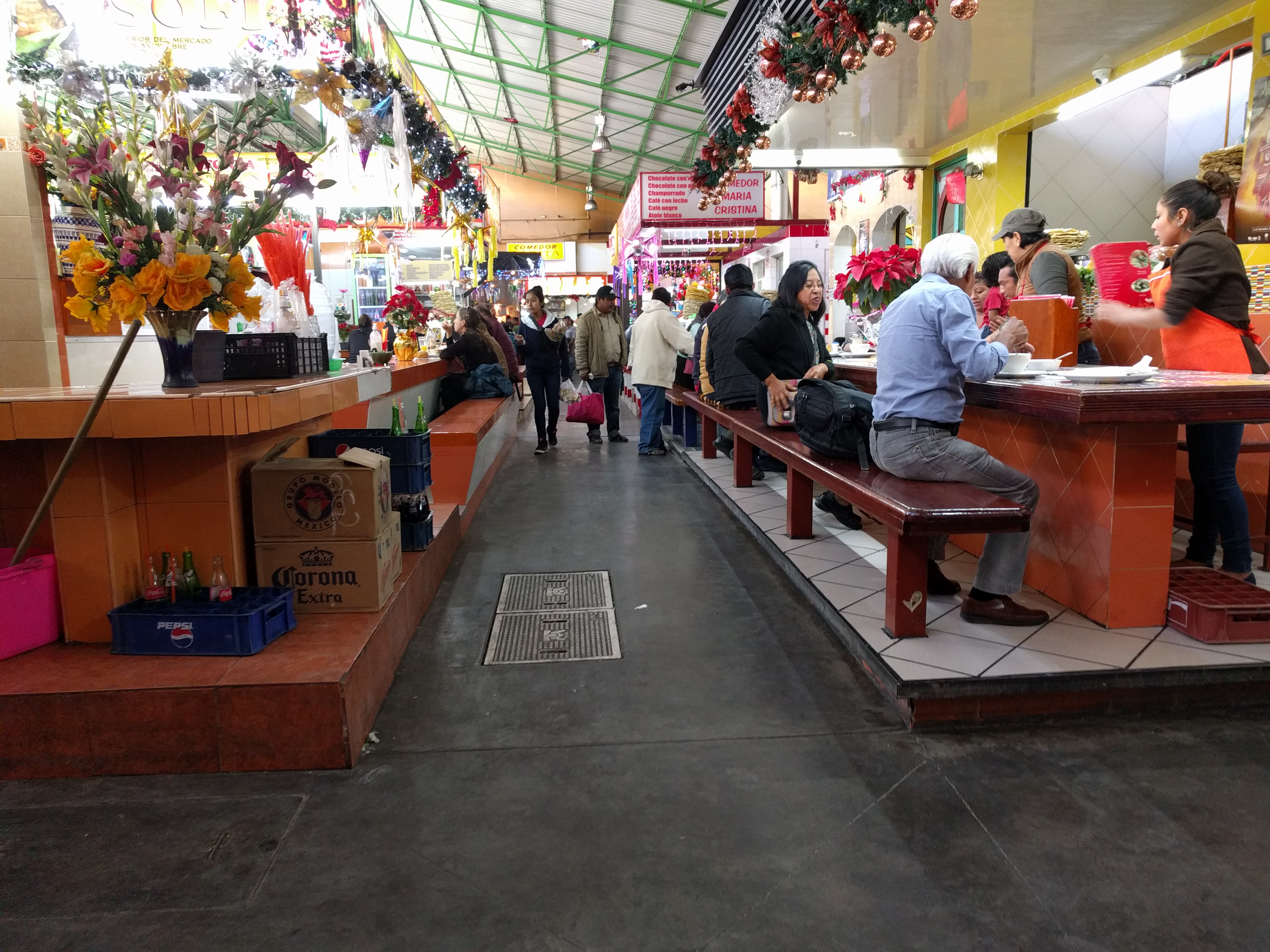 I was completely unsure of how to pick the best one, so I just chose one with an ample amount of smoke rising from it. I hoped that was a good sign. When my order came I paused for a bit and was unsure of how to proceed. The lady working behind the counter looked like she had probably cooked a million tlayudas in her lifetime. She said that first I needed to take a picture, then fold it over and use my hands. Apparently she knows the inherent gringo passion for food photography. 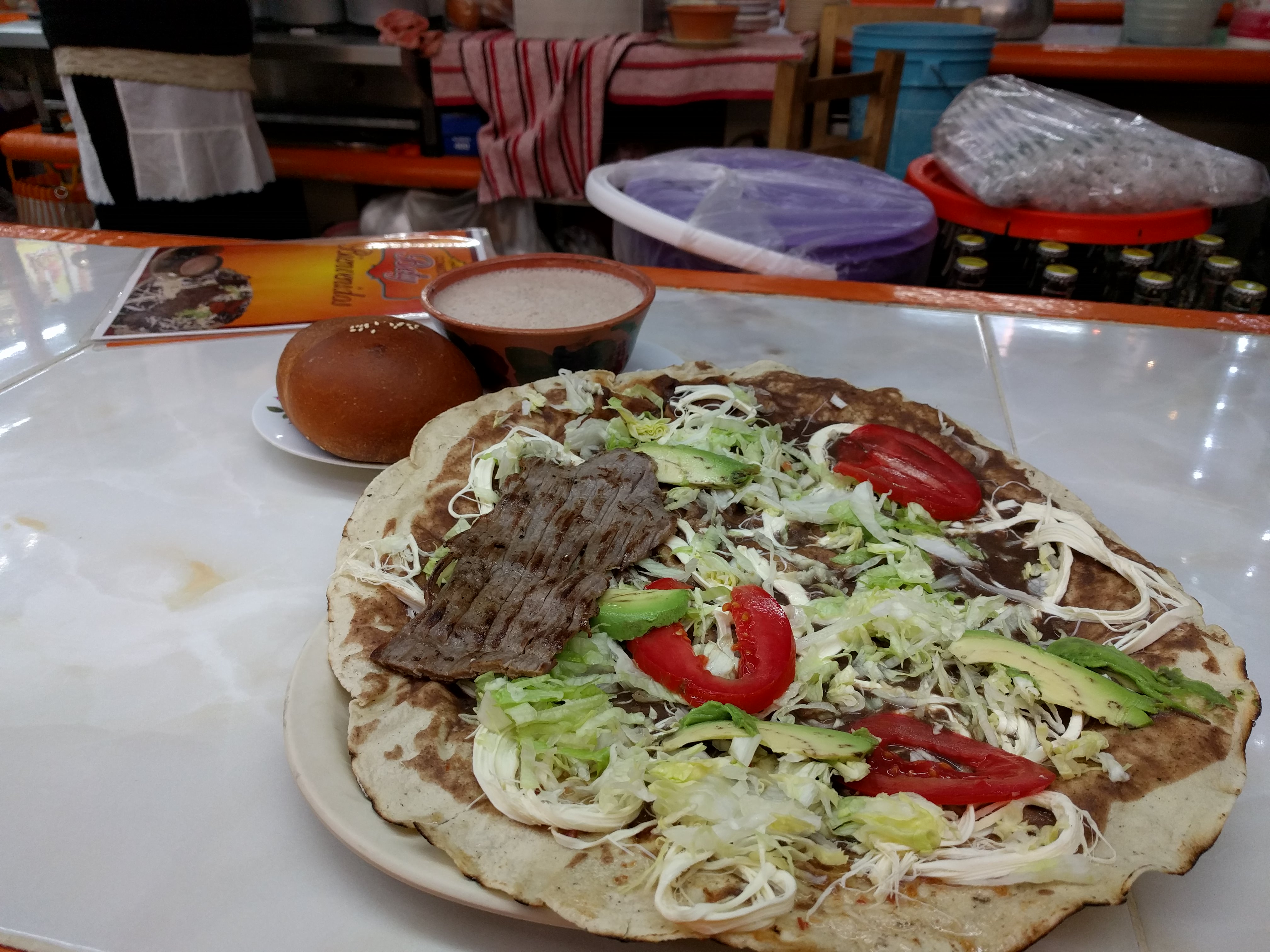 The tlayuda was pretty good and the milky hot chocolate was amazing. I hardly missed skipping out on my morning egg coffee. Total bill was about $5 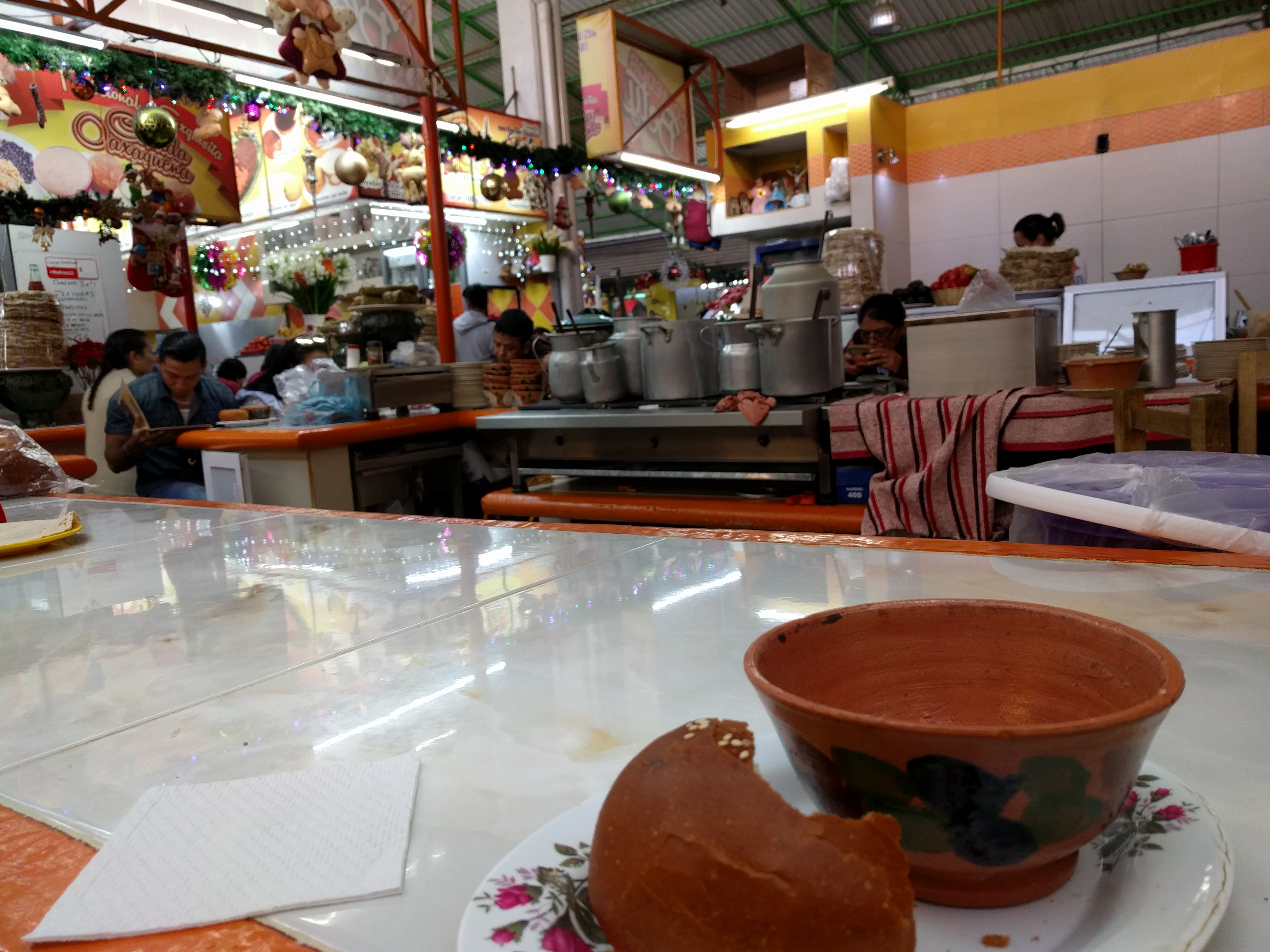 I found a really nice place to work up on the roof of the hostel. Oddly enough, it is one of the tallest buildings in the downtown area. The views on all sides were stunning. 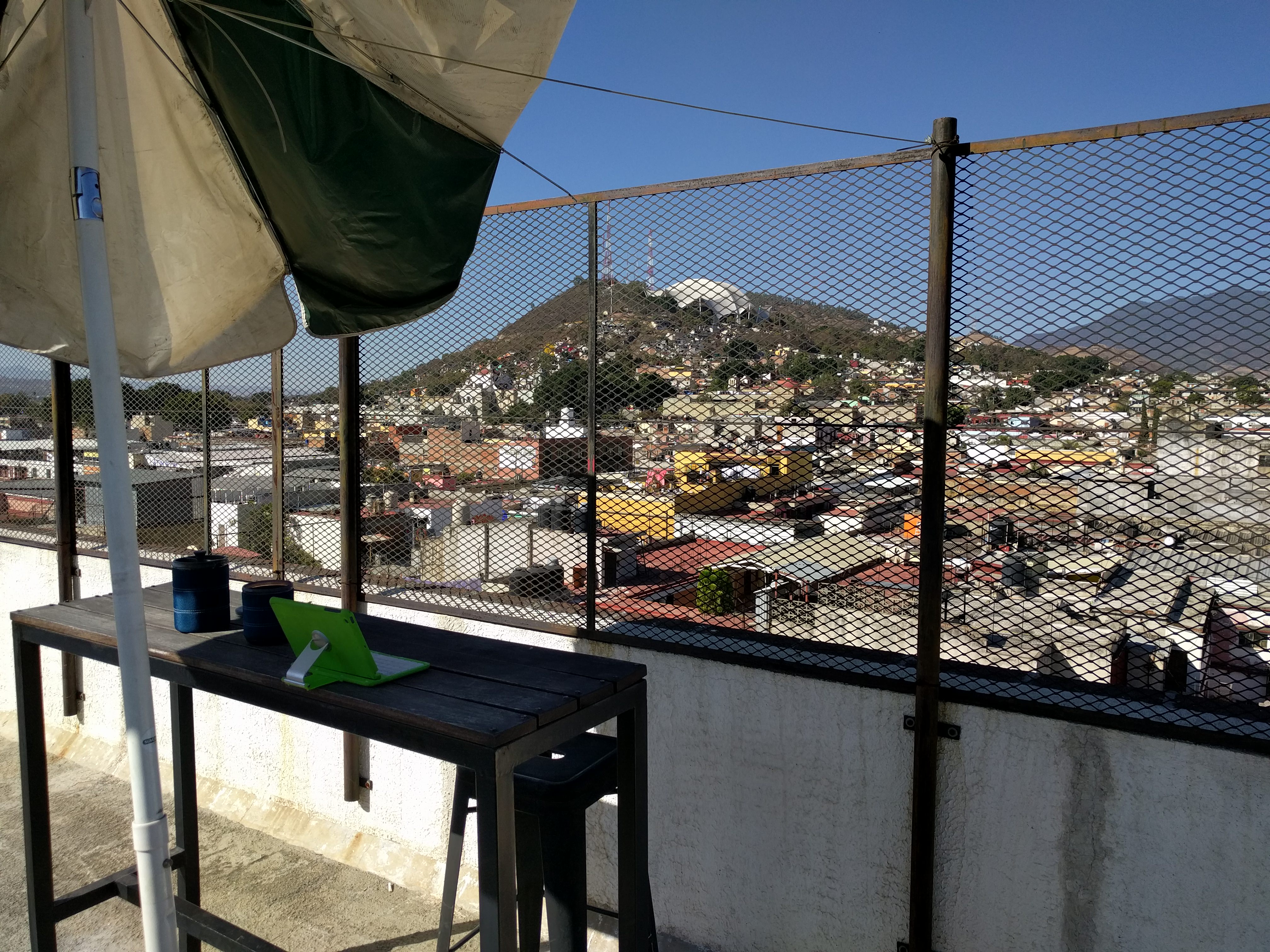 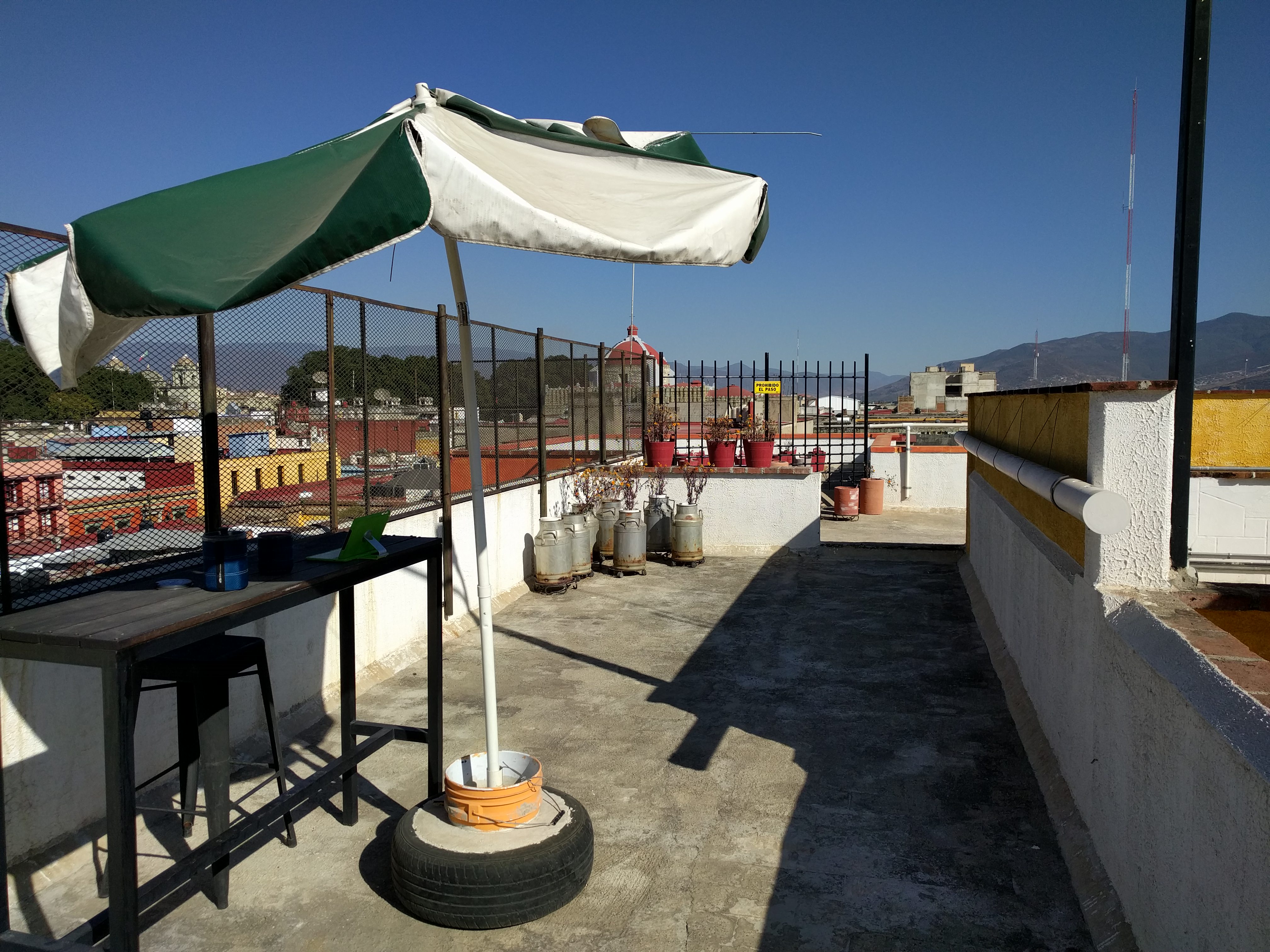 A pro tip for Mexican travel:

The further south you venture, the less likely you are to see hot water heaters. Instead, there will be solar heated units like this one mounted on the roof: 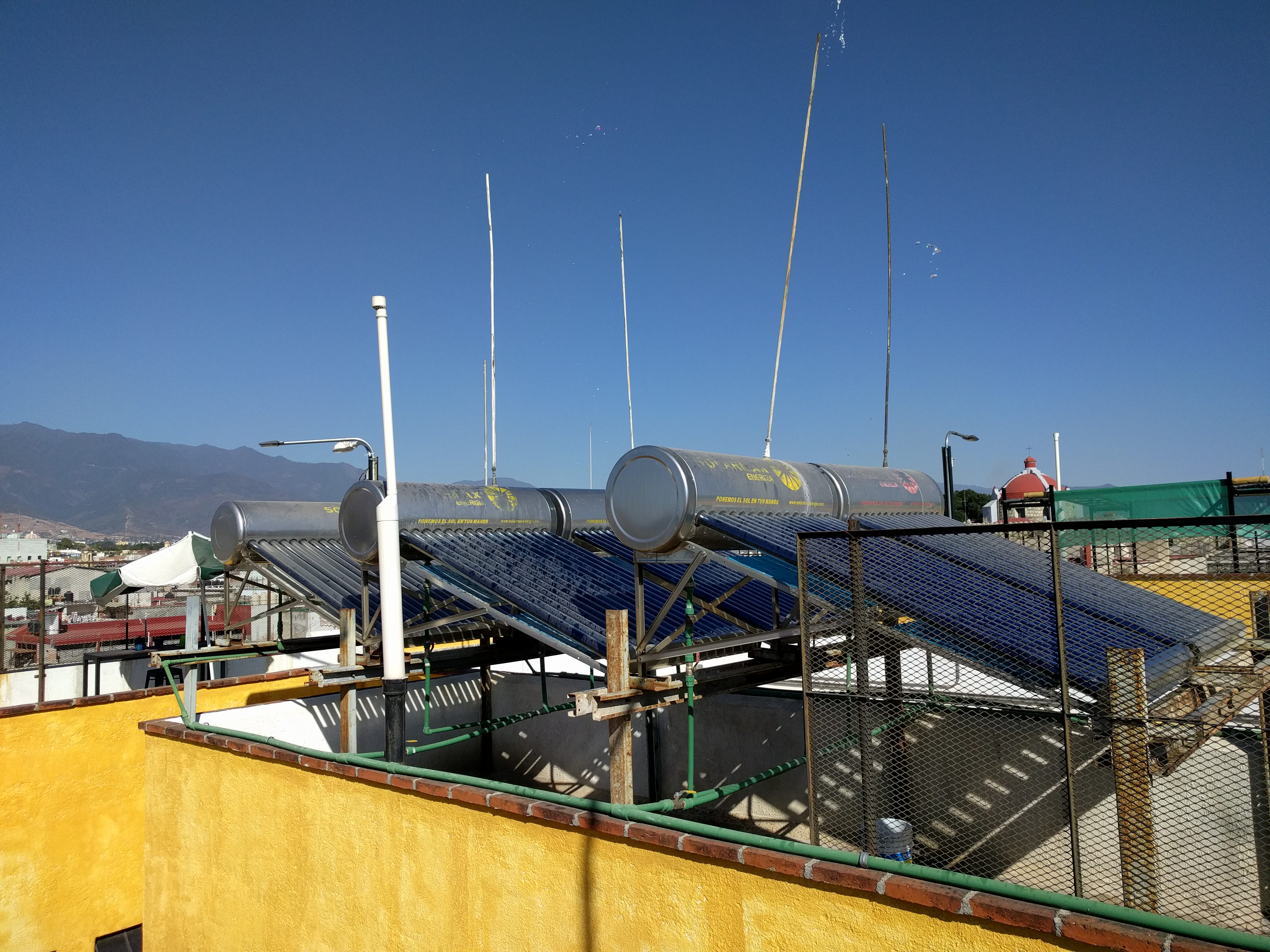 On this day, I learned that there is an overflow release valve on the top of them. It is kind of like a kettle whistling to let you know that it’s ready. If a hot shower is a priority for you, just camp out by these units until they spout. 🙂

I grabbed some tortas in the evening and took it easy. It was a nice down day and a great introduction to the city. But there is still a lot of Oaxaca-ing to do. (Last time, I promise) 🙂

Realtime update: I’m heading off early today to visit the Sumidero Canyon just north of Tuxtla Gutierrez. I hope to be in San Cristobal de las Casas by evening. I will probably linger there a few days, working on catching up and on planning ahead.

4 thoughts on “Oaxaca-ing on Sunshine”