There’s hardly a better word to describe this place. 🙂 We visit the picturesque, non-commercialized beach town of Zipolite. A place which has beautiful scenery, hippies and nude beaches. Annie could hardly keep her body panels attached.

My time in Oaxaca City had ended, but I still had some more experiences to squeeze out of Oaxaca the state. The coast of Oaxaca is known for being scenic, eclectic and most importantly, budget-friendly. It seemed like the perfect place to dip my toes in the ocean for the first time in Mexico. 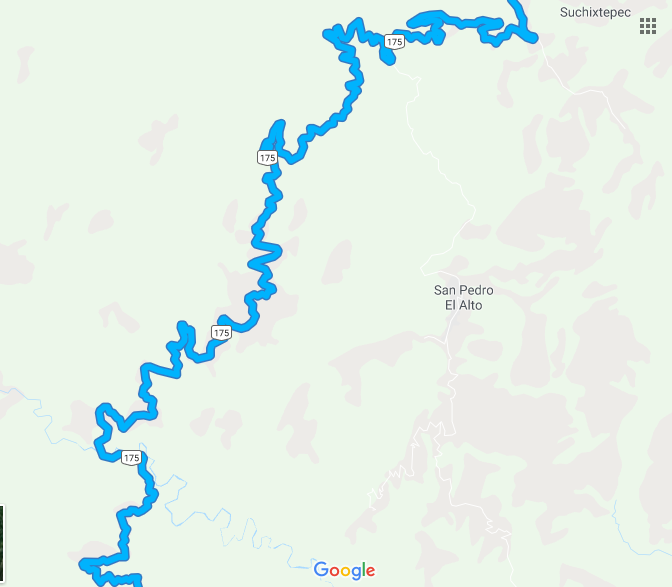 I was once again treated to a peach of a ride. The day began with some more desert-type scenery, but then I saw the absolute last thing I would have expected to see: A lumber mill. I think  I would have been less surprised by a snowshoe factory.

As we left the Oaxaca Valley we began to climb to over 9,000 ft. of elevation. The scenery turned into dense forests set into sharply descending hillsides.

It was very difficult to photograph, since the road offered so few places to pull off. And the few places that were, were covered in trash.

I found a few winners though. 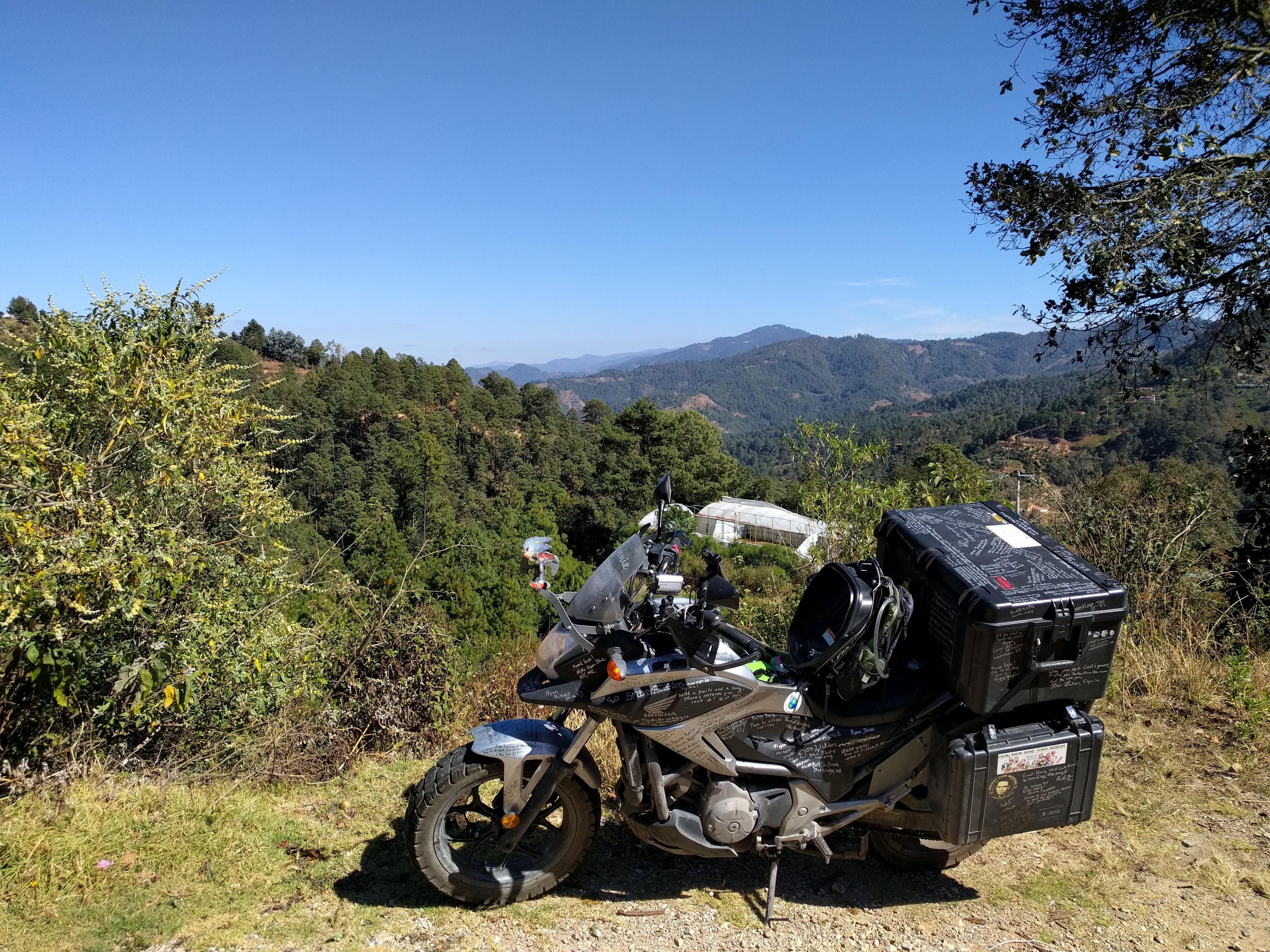 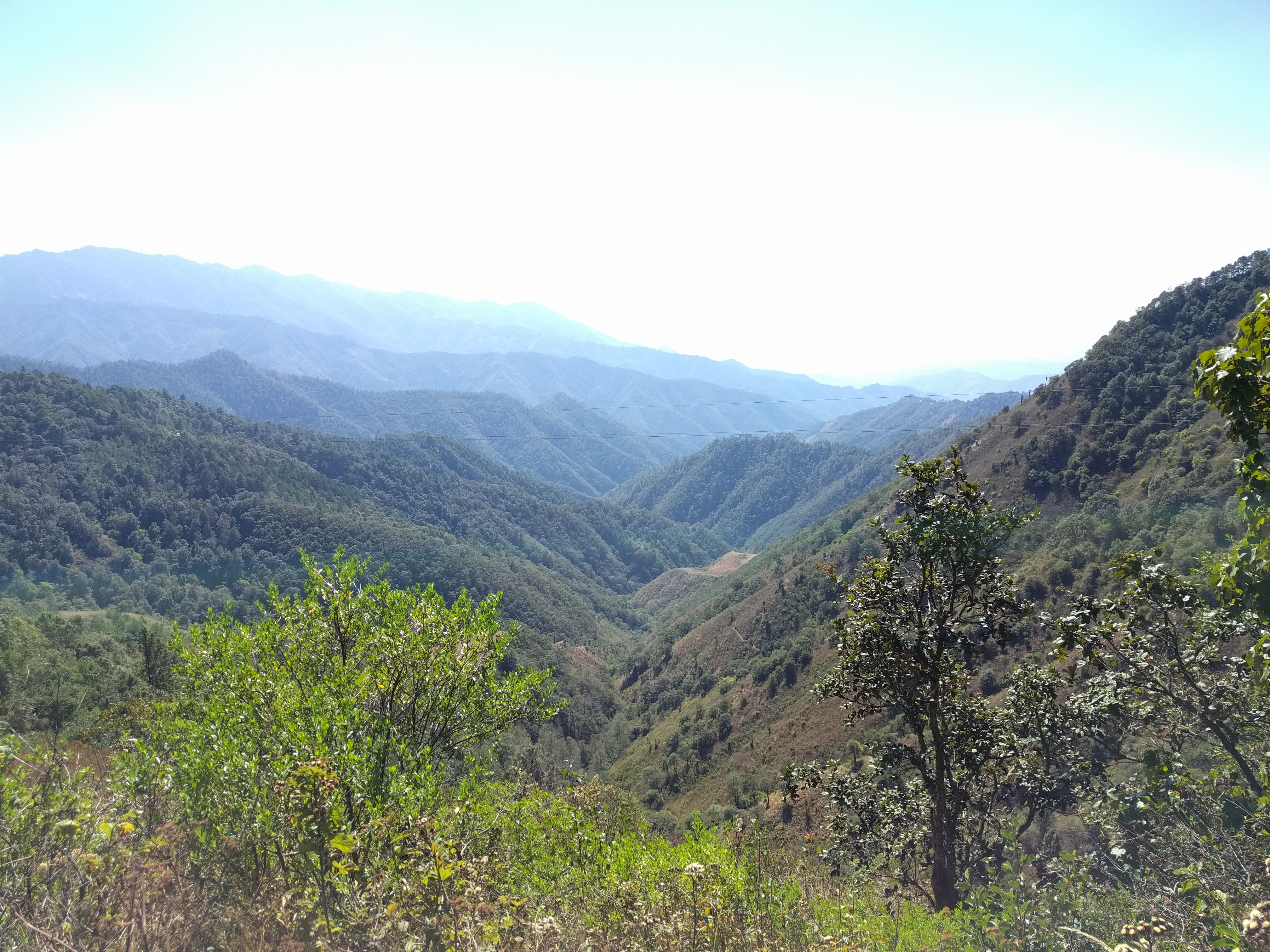 But what goes up, must come down, right? As my descent began, I was surprised to be encountered by some dense fog. Cloudy days have been few and far between in Mexico, so it felt strange to be inside of one.

I backed off of the throttle, which turned out out to be a good decision. There was a landslide which was totally unmarked. 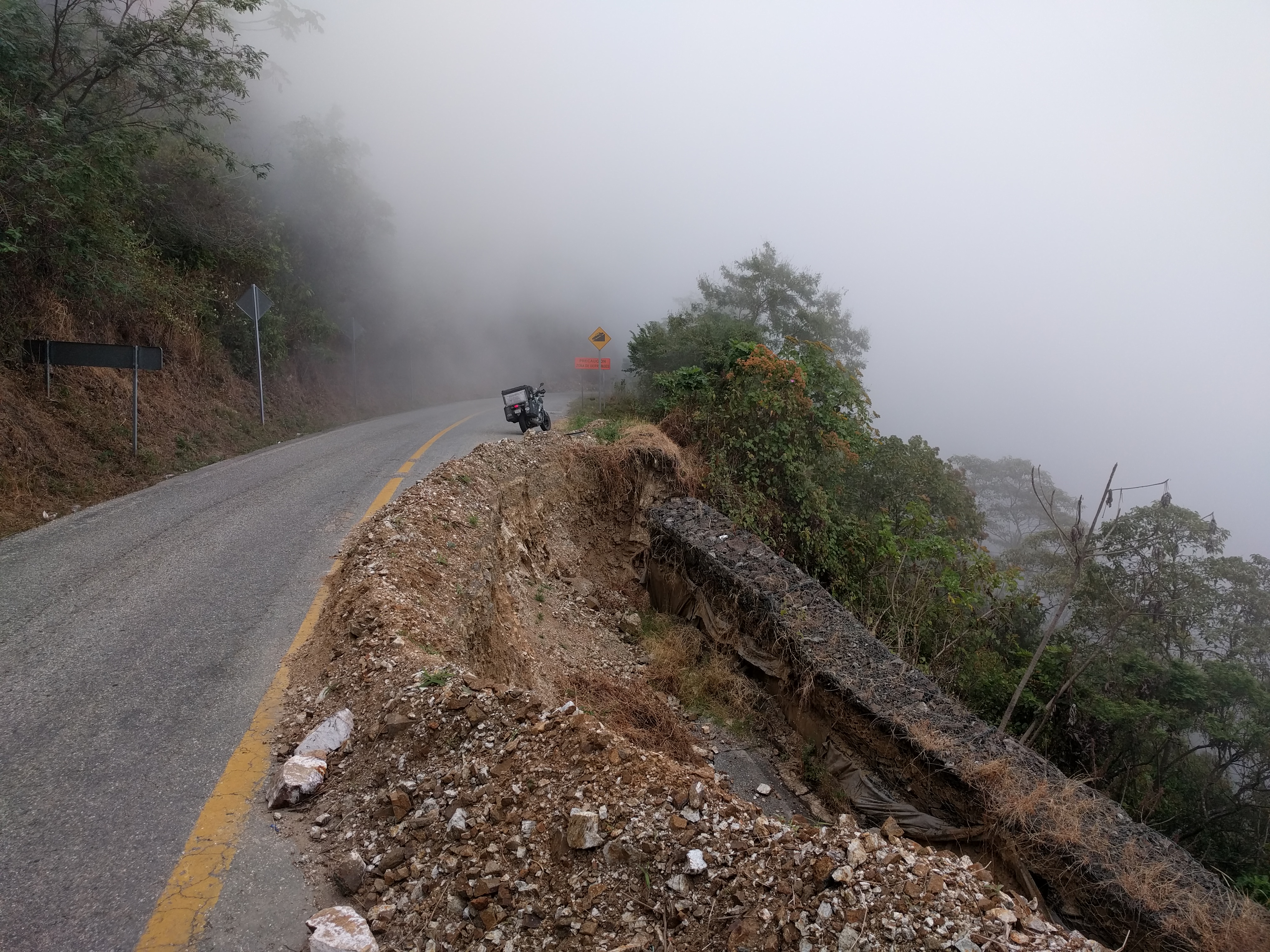 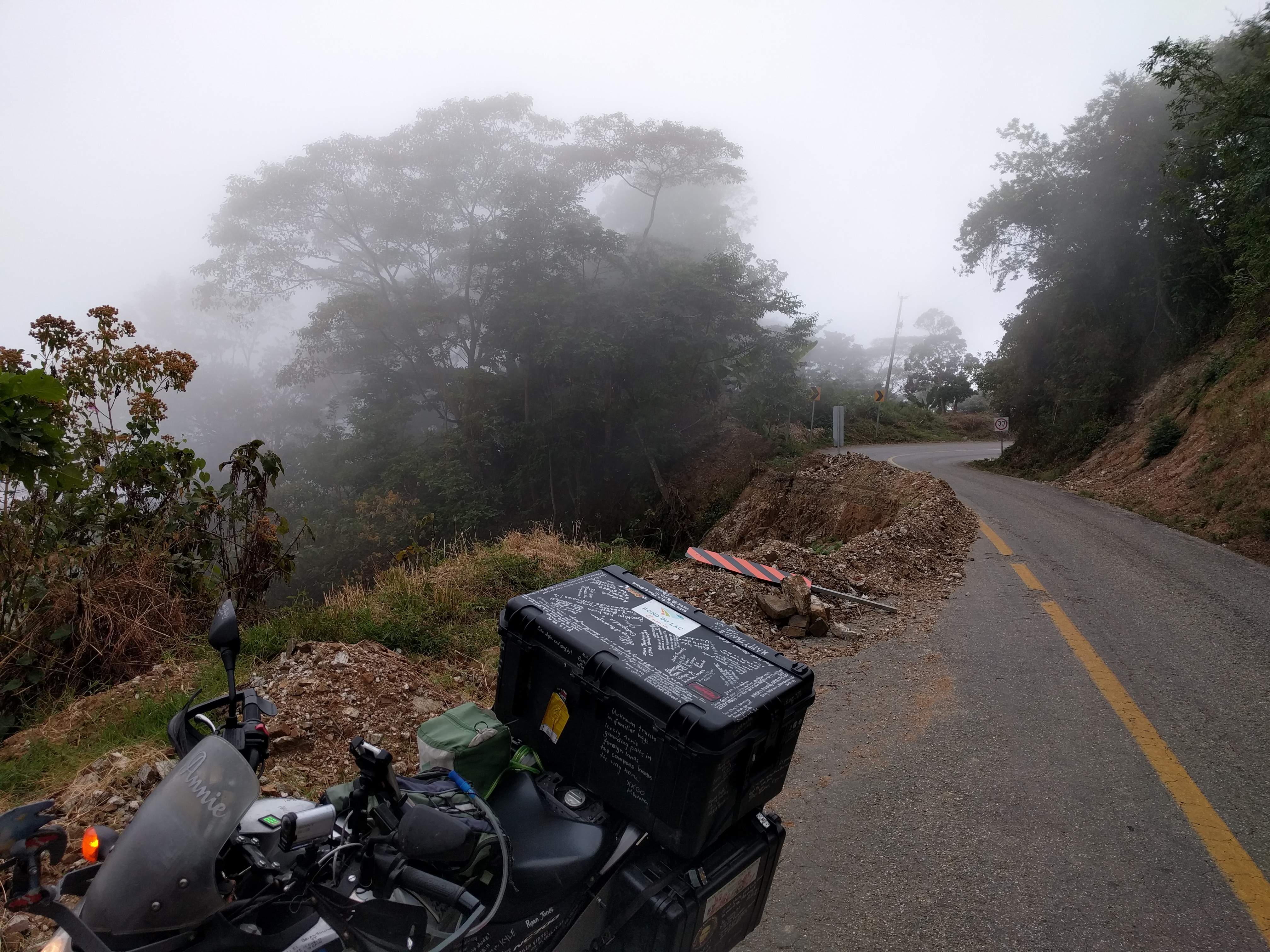 That could have just about ruined my day.

As the fog dissipated, the humidity that it brought remained. For the first time in my life, I could feel that I was somewhere tropical. The only feeling I could compare it to was the artificial rain forest at the Henry Doorly Zoo in Omaha.

Soon I was seeing roadside vendors selling coconuts and other exotic (to a Nebraskan, at least) fruits. These moments were really special for some odd reason. Perhaps its a function of never having been this far south before. Everything is just so new to me.

My destination for the night was the beach town of Zipolite. I hadn’t done too much research about the Oaxaca coast, but multiple people had recommended this place to me. My Mother is still helping me with my trip planning (yeah, she’s really the best). Upon arriving in town, I had a message from her. 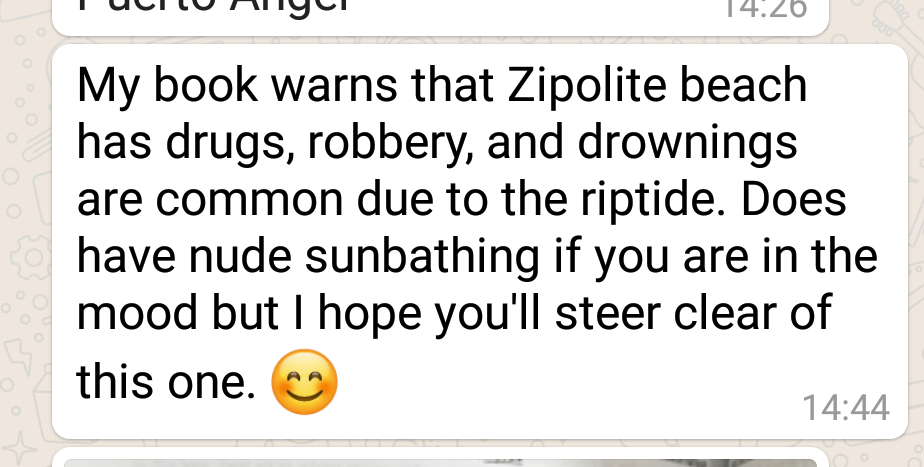 For lodging, I wasn’t looking for a fancy resort of anything too special. Sometimes you just want to find a nice place on the beach. 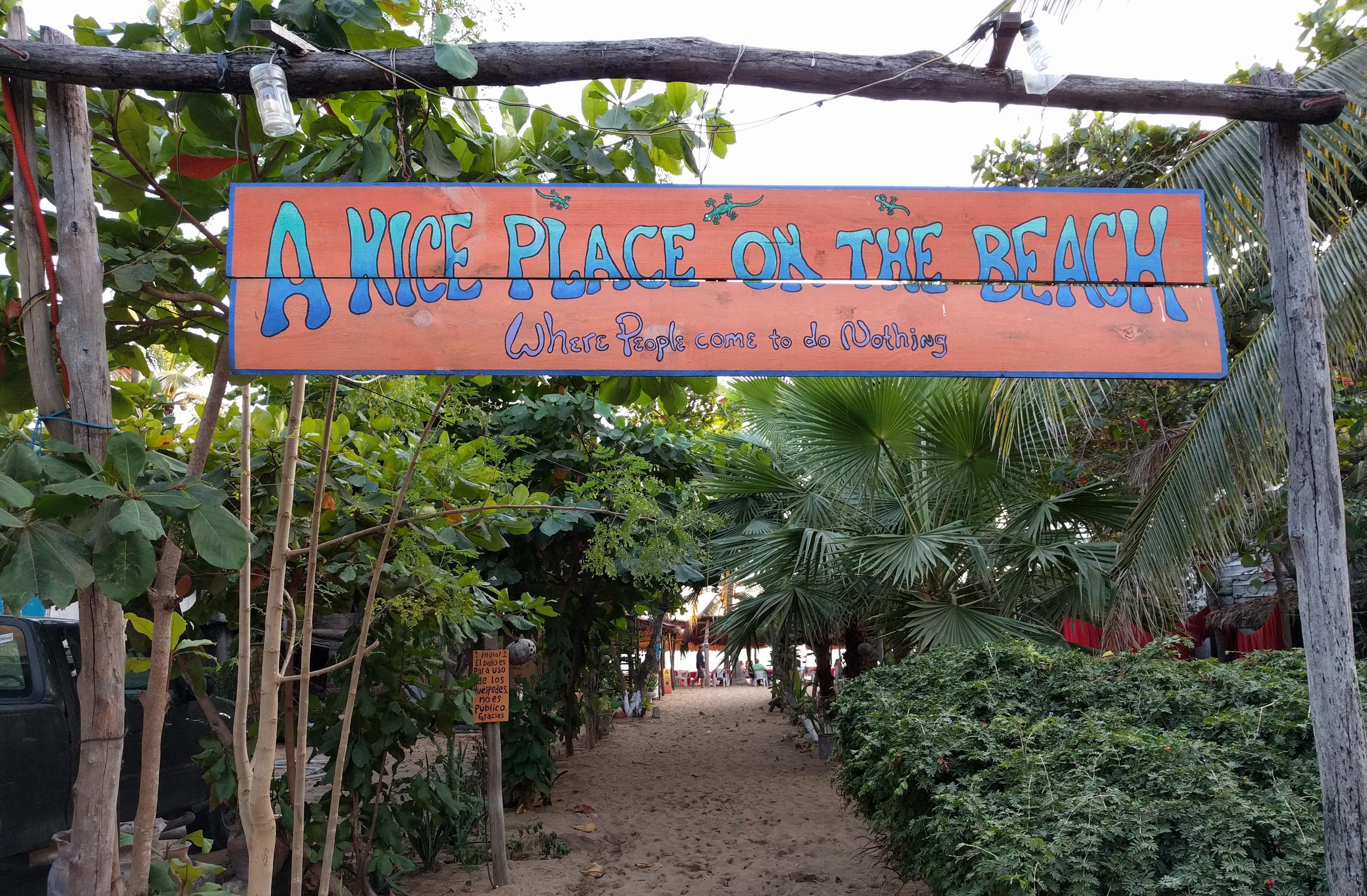 This place is a basic restaurant/bar with another building that has some rooms. 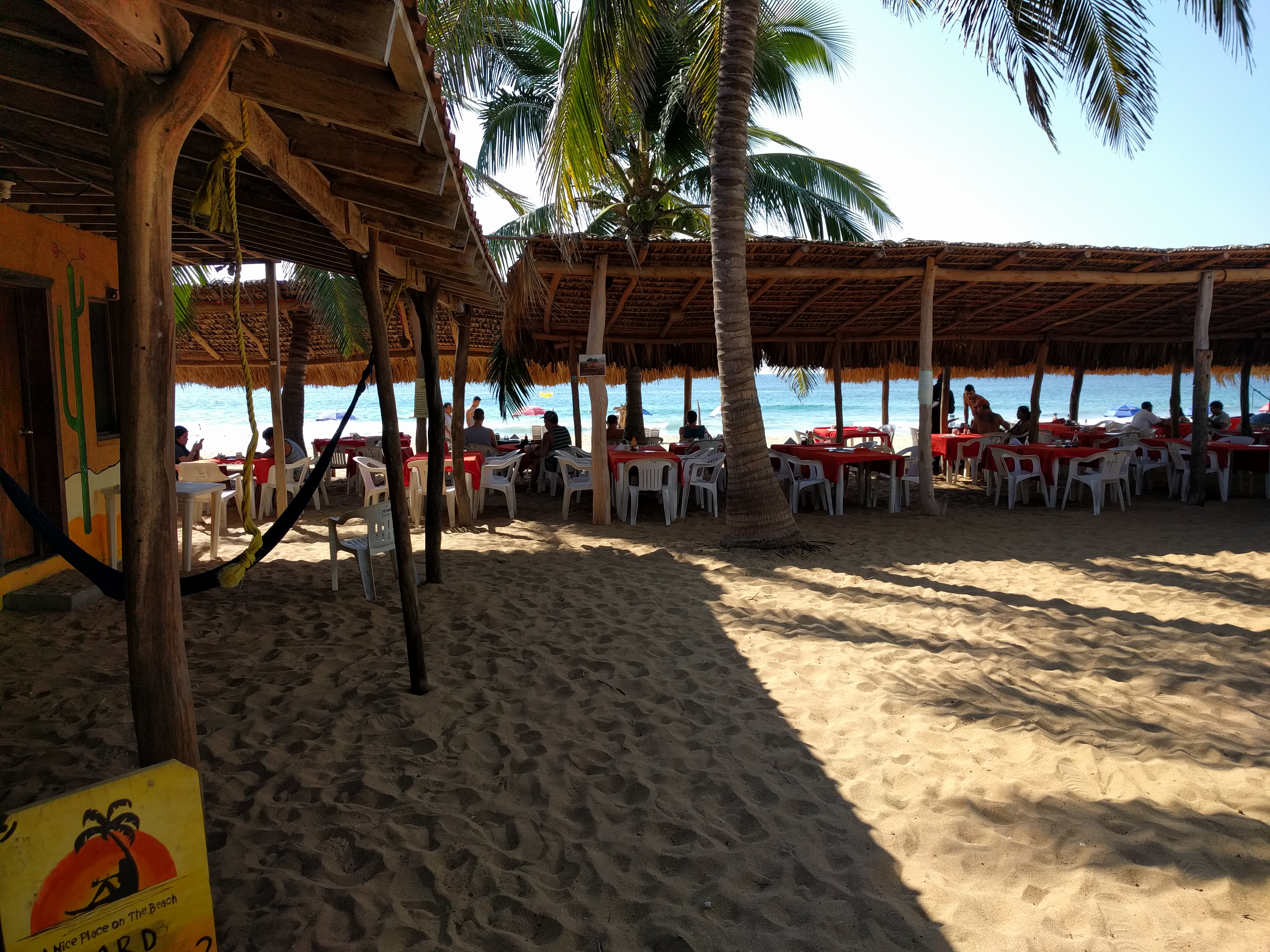 The price was 300 pesos, about $16. Not too bad for being right on the beach. The room was a “shared room” with two beds, but I would have it to myself for the night. 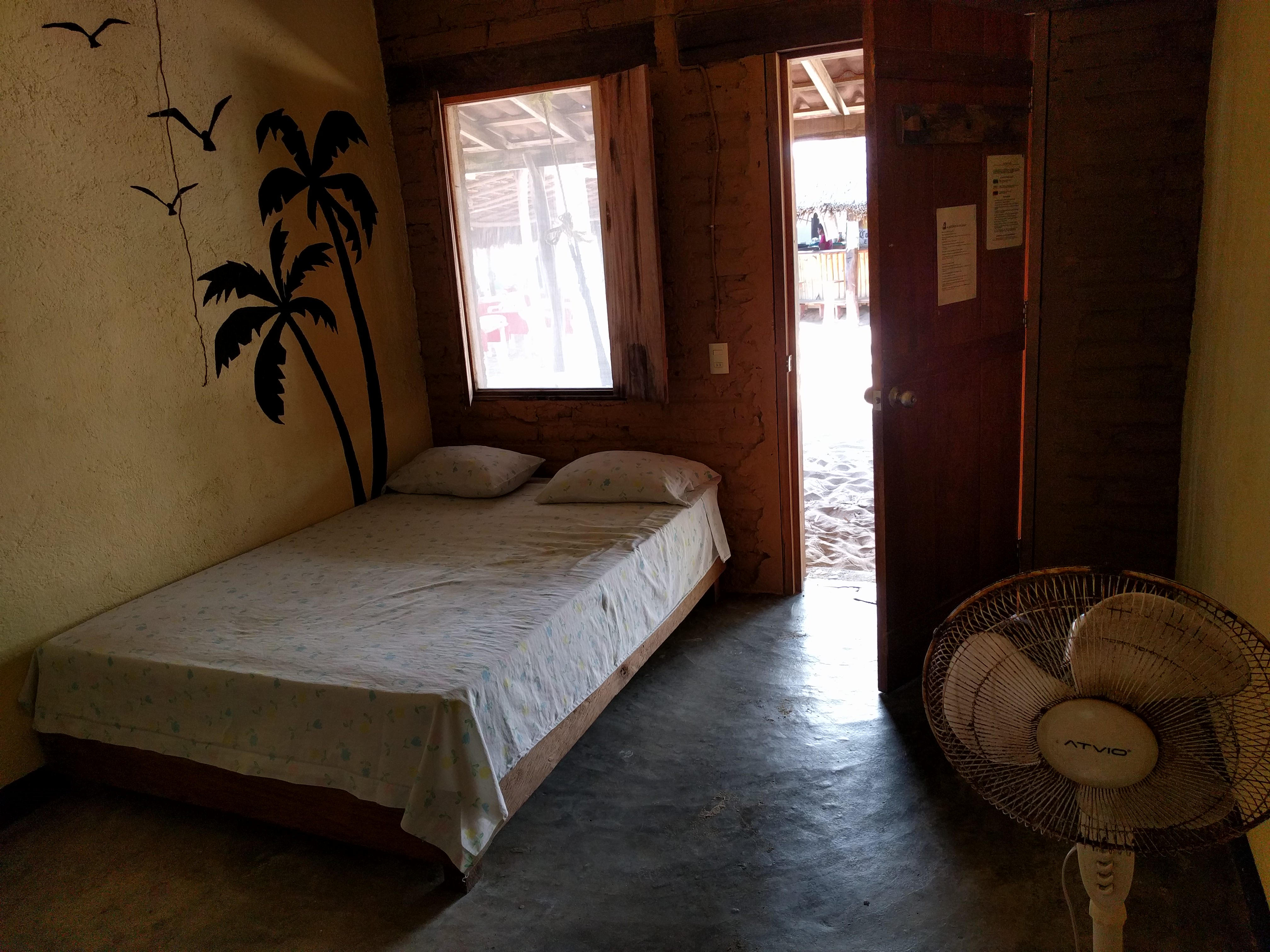 The parking wasn’t super secure, but it was at least off of the street. 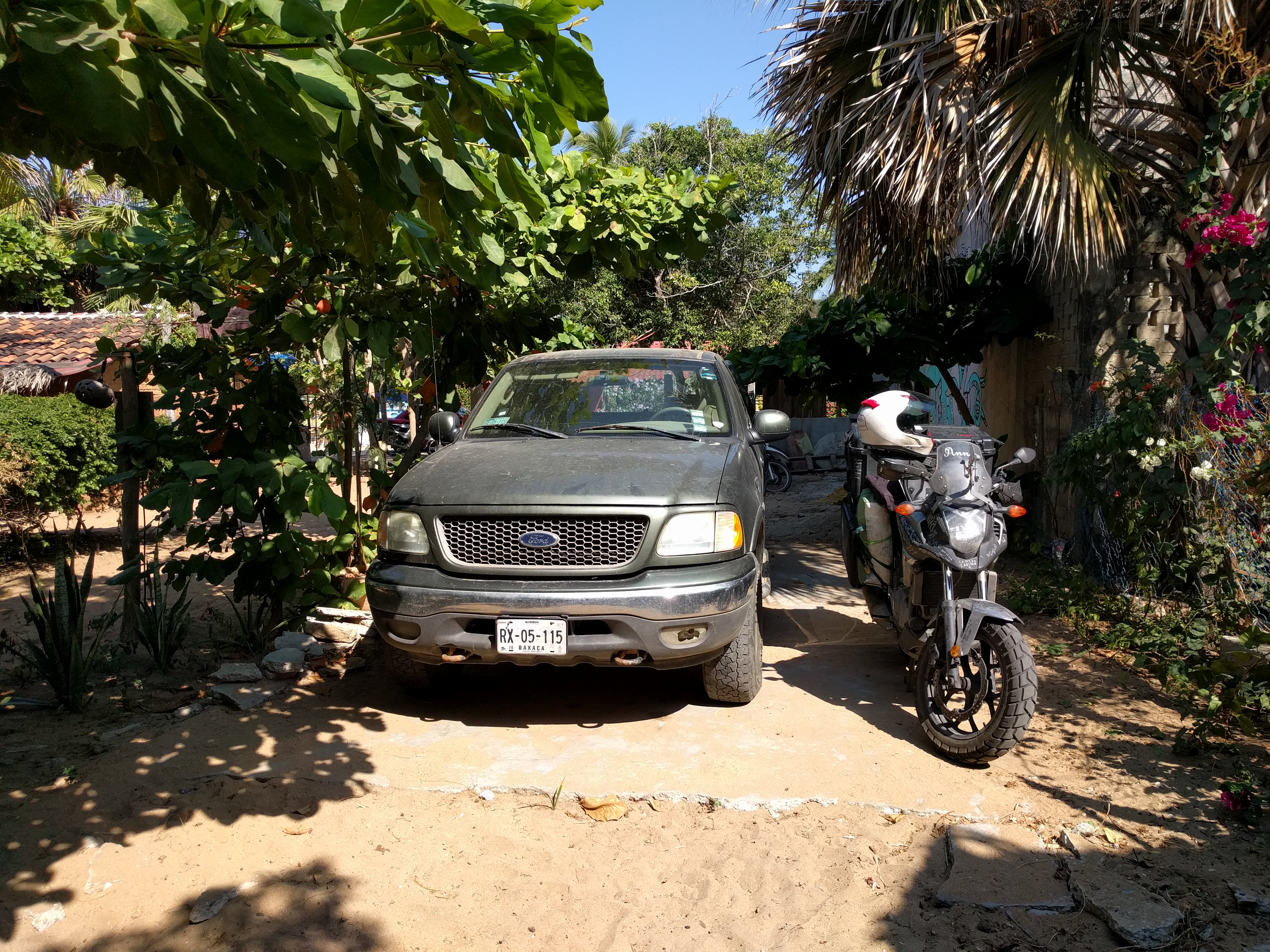 So what’s a Nebraskan to do next? Less than 10 minutes after check in, I was already splashing around in the ocean. This was my first time seeing the Pacific Ocean since way back in Vancouver.

The waves are pretty intense at Zipolite, but I still had a nice swim. Upon exiting the water, I roamed up and down the beach. It was at sunset, so a really pretty time. 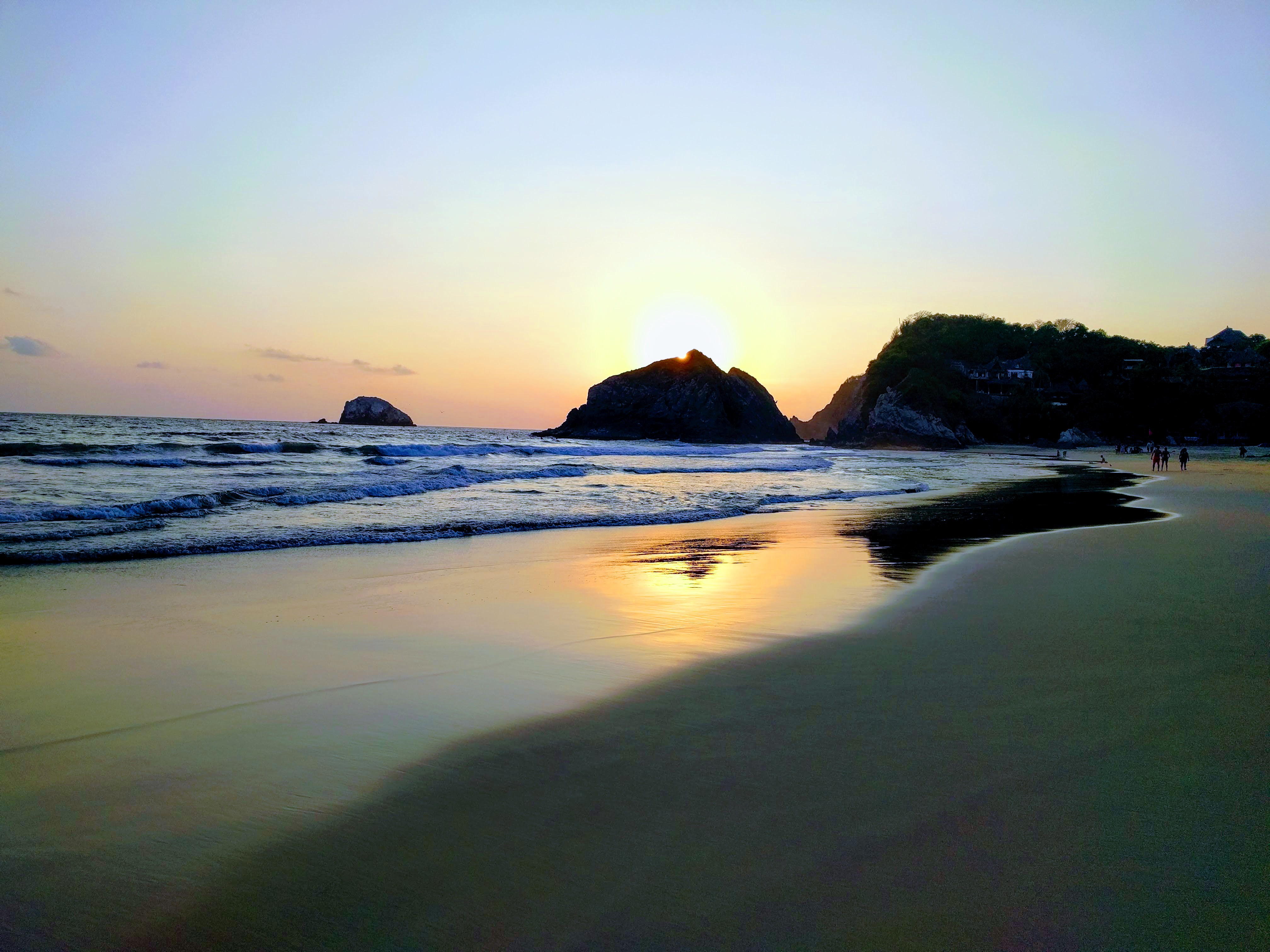 There were a few nude beach goers out and about. Some doing yoga, some just airing themselves out.* This doesn’t offend me, but I must confess that I have a hard time understanding it. I do believe that there must be something inherent about it. Maybe once we can answer the question, “Why do people like to be naked in public?” the rest of the unanswered questions in the field of psychology will fall like well placed dominoes.

*I originally made a typo in this sentence, it read “siring themselves out.” I had half of a mind to leave it that way. But no, this beach is not quite that progressive. 🙂 In case that term is a little too Nebraskan:

After sunset, I did some typing and had some nice, cold, $1.10 beers. I felt a little embarrassed to be working at a place “where people come to do nothing.” I turned in fairly early.

Do you want to know what the gateway to alcoholism looks like? 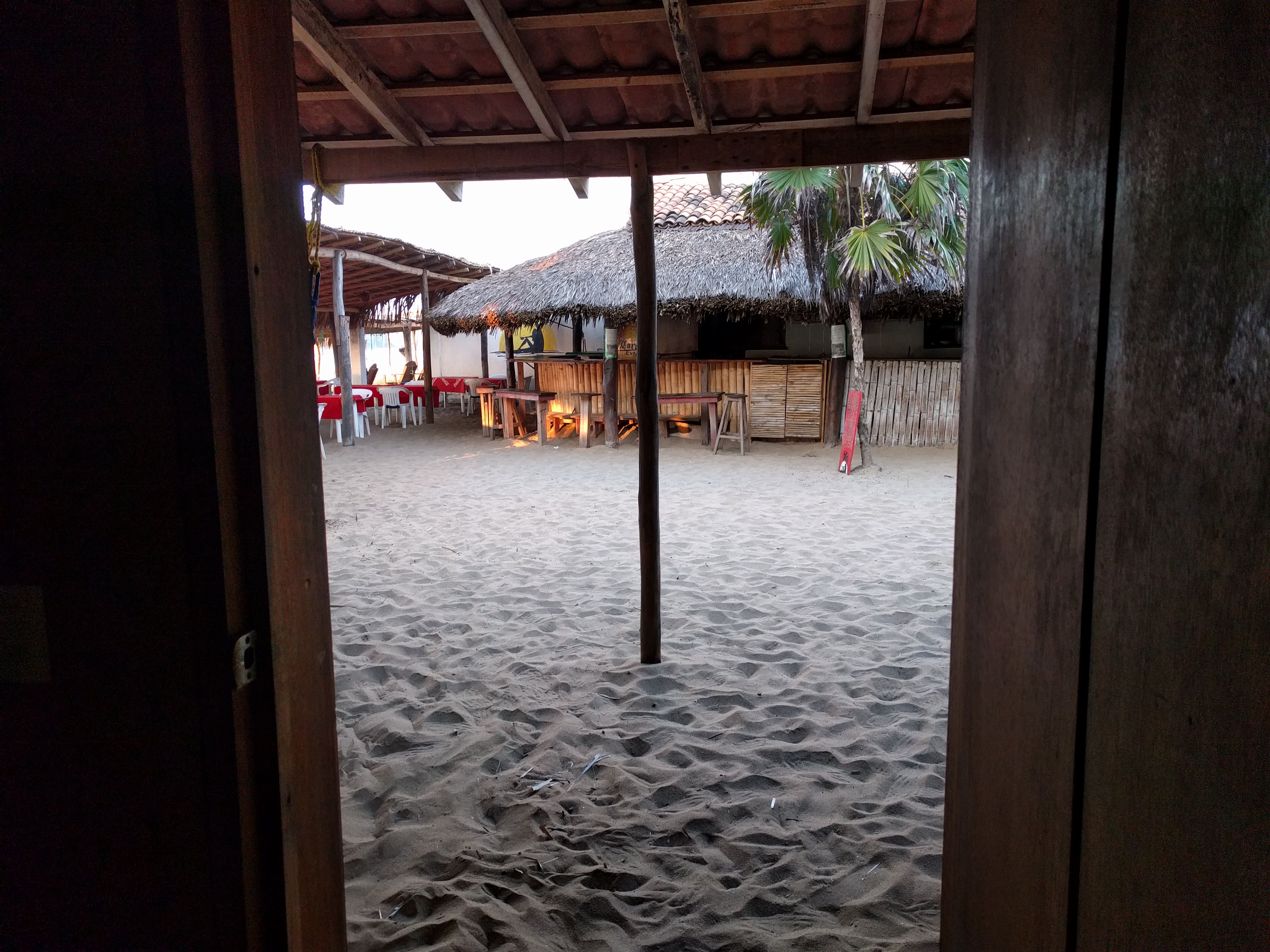 You exit your room straight into a bar selling beers for a dollar a piece. I was able to resist. 🙂 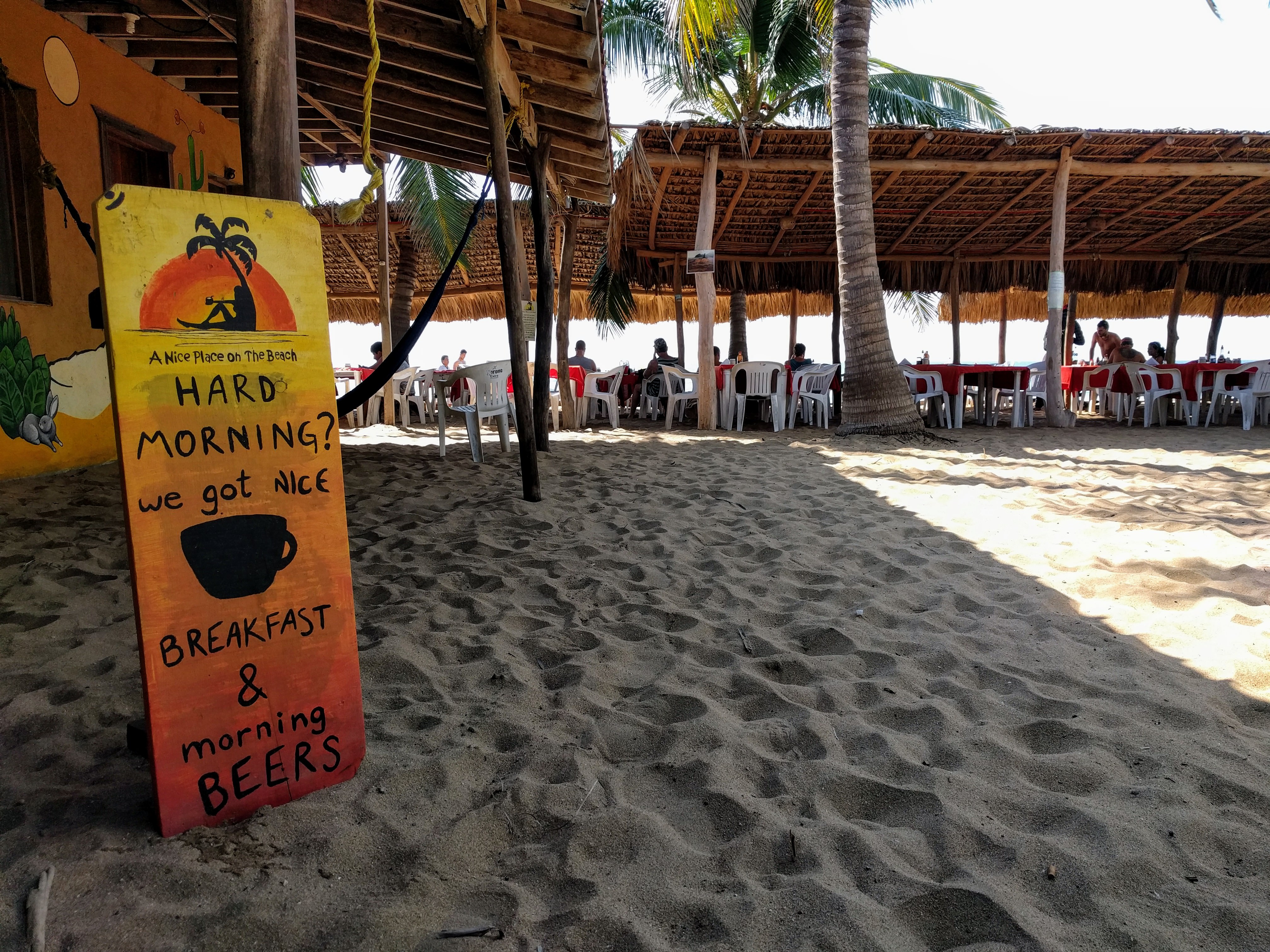 For some reason, I felt compelled to go running this morning. One of the major drawbacks of this activity is needing to have a plan to deal with sweaty clothes. This is quite difficult when travelling. In this instance, however, I knew I could just run in my swimsuit and wash off in the water. Genius, I know.

(Sunrise picture at the top)

As I ran, I thought up a really good interval workout for this locale. Jog until you see a naked person, then sprint until you see the next naked person. If I’m ever in a training phase when I visit here, this will surely be my workout. 🙂

I ended up going about 3.5 miles, which is pretty good for being out of shape and running in sand with bare feet. It felt nice to know that I still have somewhat of a baseline fitness. After a swim and a shower I had some Huevos al Mexicano (Mexican Eggs). 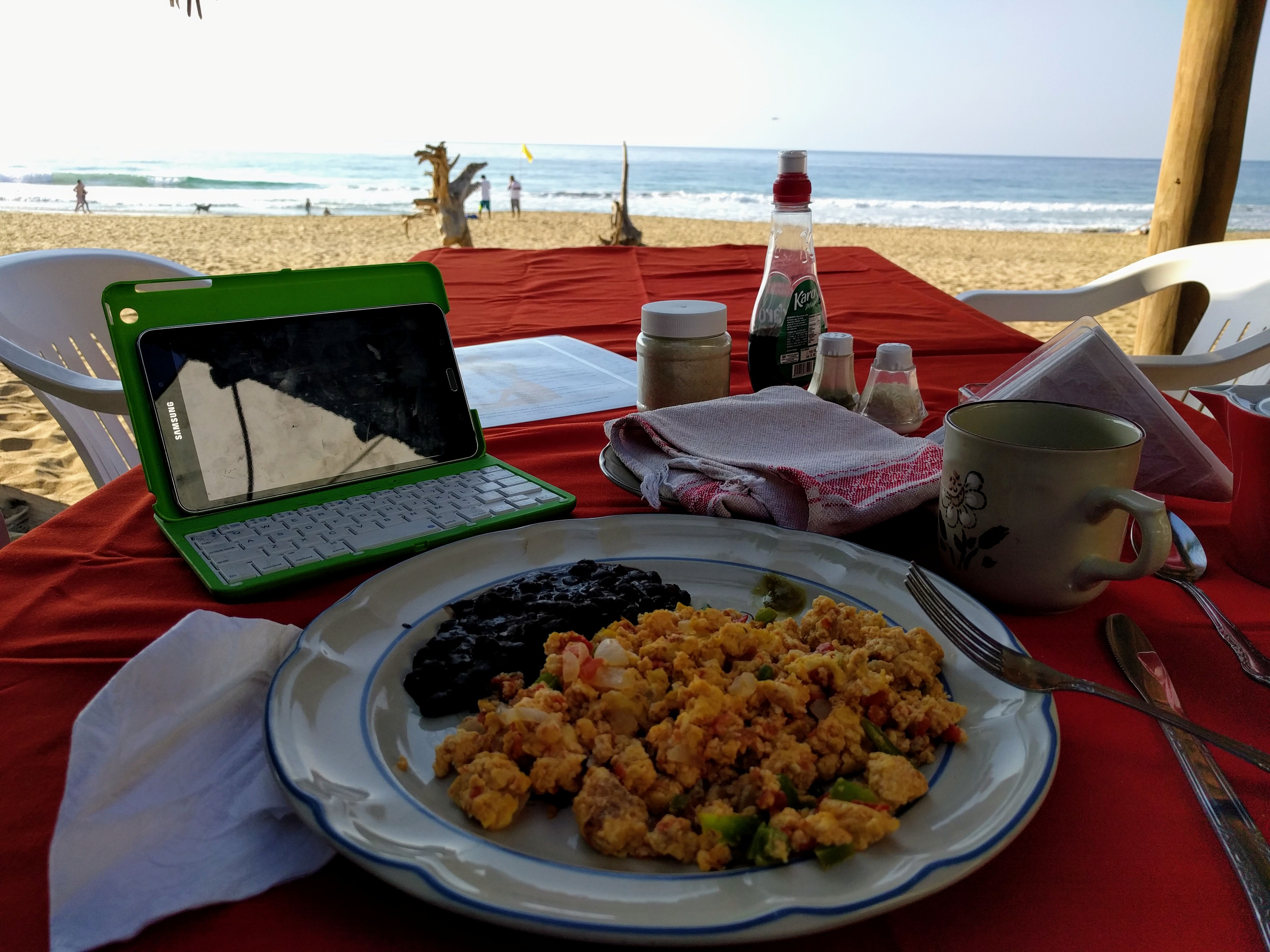 This meal was a little more expensive, almost $5, since they charged me for the refill of my coffee. Not too bad, I guess.

Though I wasn’t here too long, I recognized that Zipolite is a special place. I still don’t understand why it is so cheap and why there are no major resorts here. Maybe the old, naked hippies scare the major investors away. Maybe the complimentary scents of marijuana and body odor put some people off. (Seriously though, these two smells have a way of amplifying one another. Am I the only one that thinks that?)

This beach seems to still remain an escape for all sorts of people. I hope it never changes. 🙂

Wausa, Nebraska made the sign post forest in Watson Lake, Yukon, but it was not on this one. 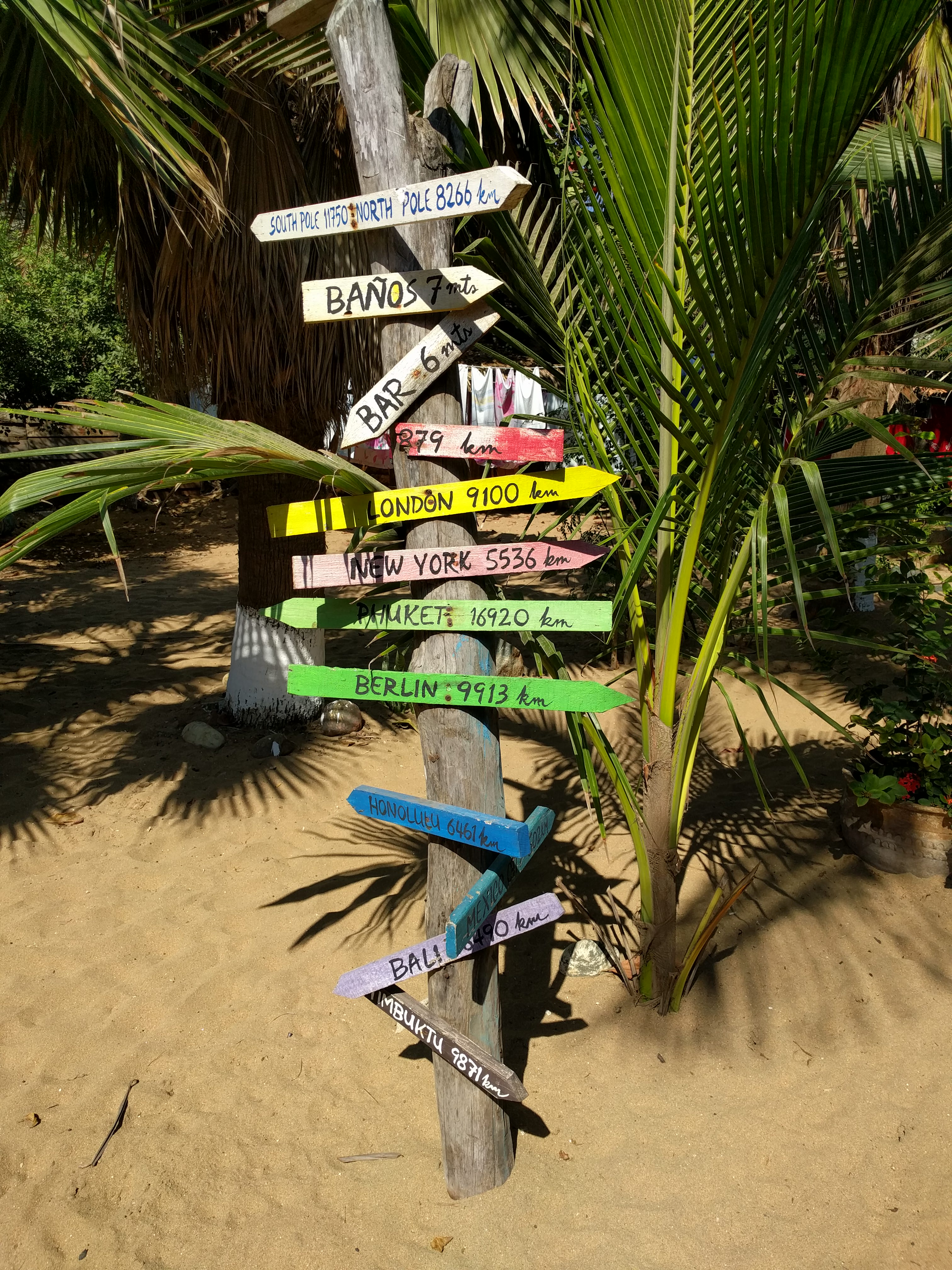 Off to my next adventure. I thought that returning to Zipolite was a possibility, but I wanted to investigate some more of the area. Annie was a bit heavy in the sand, but I executed a textbook three point turnabout by hand. 🙂 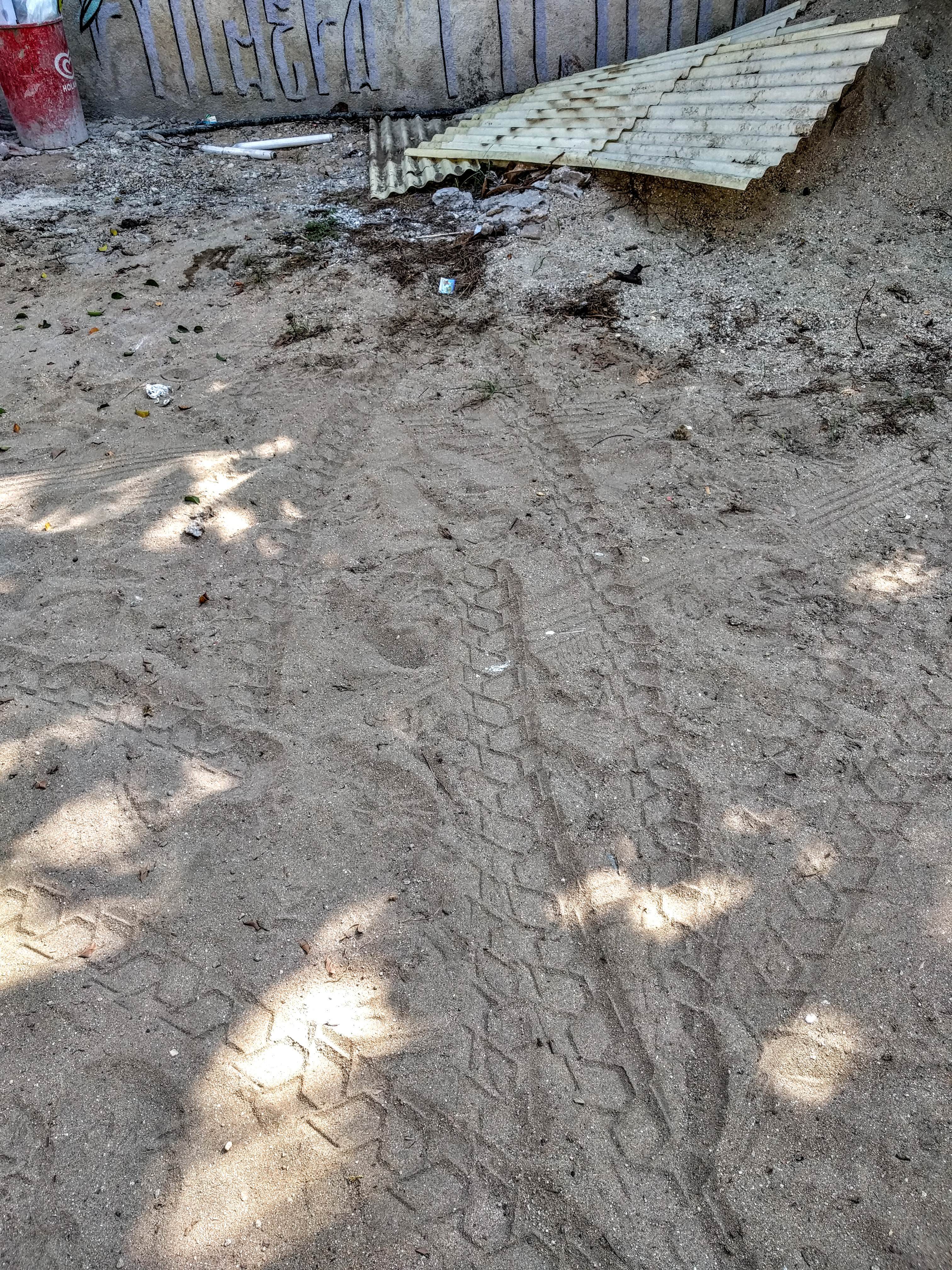 Here’s a map of some of the places referenced.

I began by heading west through Mazunte. The town was a mess, as there was a big market happening right on the main road through town. I eventually found a way to bypass it.

I was trying to head to Chacahua. My information said that this was a little beach town with a lagoon that was kind of out of the way. It sounded just right for me. I made my way down what looked like the most major road to get there, but was stopped about half way along the sandy path. 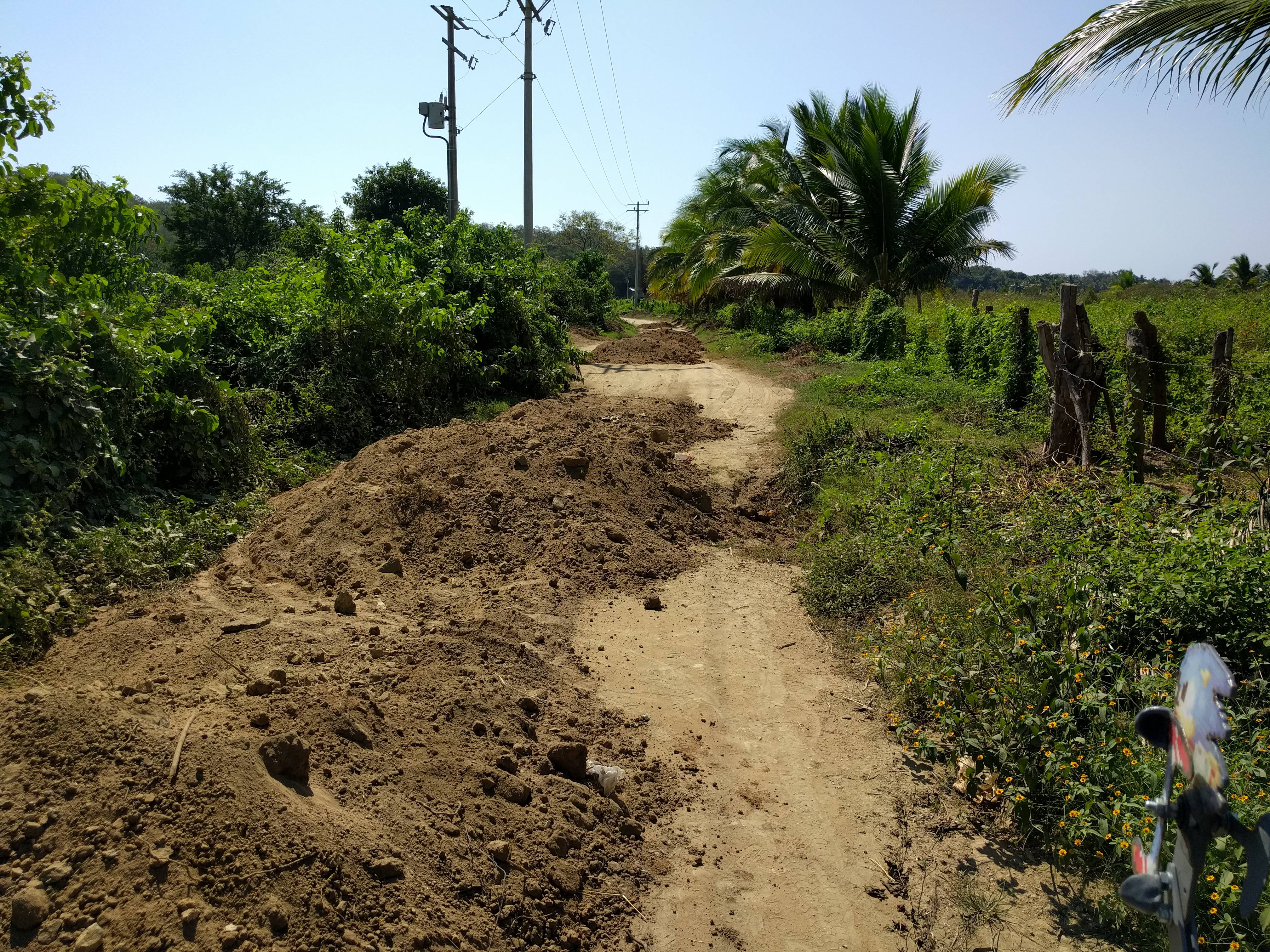 Not to be deterred, I found another route and bounced down some more sandy roads.

The road got worse until it finally ended into a sort of bog. There were a few guys there and I told them where I was trying to get to. They said that Chacahua was “here,” but I didn’t understand much of what was being said. I felt a little uneasy about the area, so I turned around and headed back towards some civilization.

Next stop was to find a beach that my host in Puebla, Vladimir, had told me about. The beach was called Playa Boquilla (“Playa” means beach, “boquilla” means mouthpiece or stem or nozzle). The hotel at the beach was called “Bahia de la Luna.” I tried speaking this into my phone to navigate there. 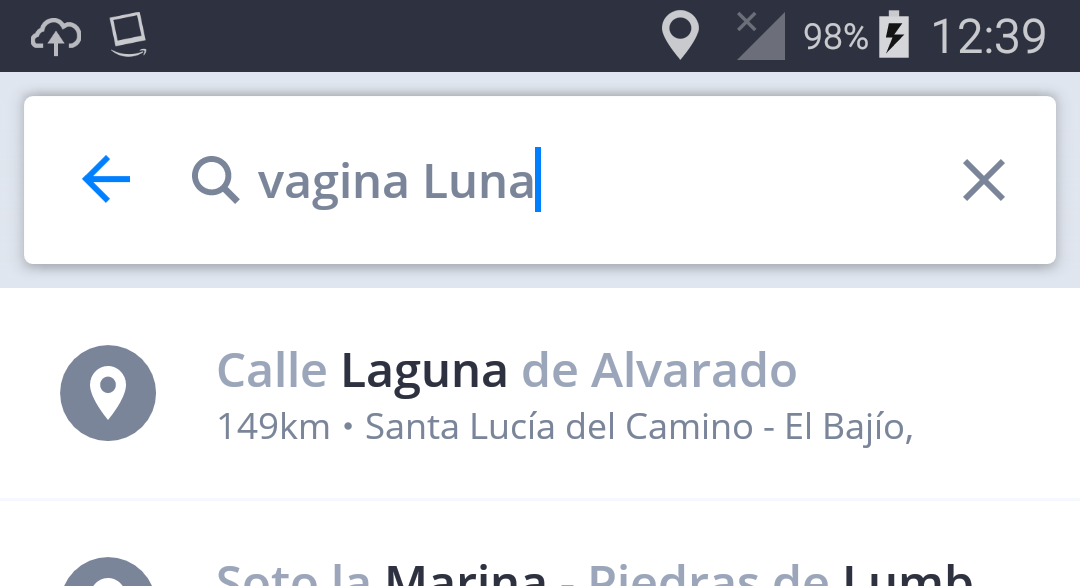 Either I need to work on my Spanish pronunciation, or google needs to work on its listening. Probably a mixture of both. 🙂

I eventually got the right place entered and began my route. After turning off of the main road, the path is dusty for awhile.

Then it changes to steep bouncy cobblestones. It was an interesting ride.

Then I saw the beach. I don’t know if I believe in love at first sight, but I do believe in camping spot selection at first site. After seeing this, I knew I would be sleeping on the beach in some way. 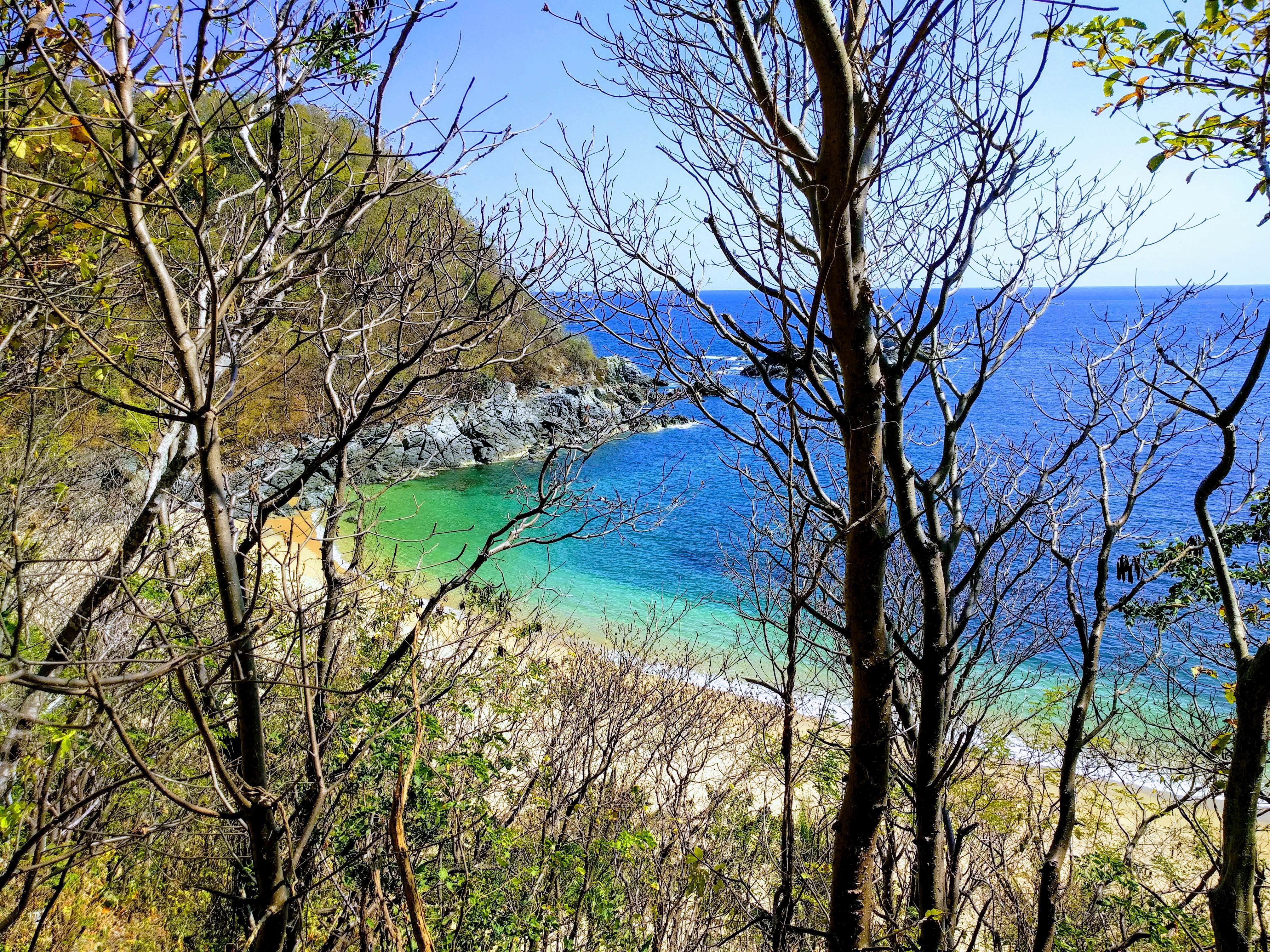 It is a fairly small beach, with only one hotel on the beach. There are a couple of others up the hill. I stopped into the main hotel, Bahia de la Luna, to check prices. It was a little rich for my blood, about $80/night, but definitely reasonable given the pristine location.

As I was arduously navigating through my Spanish, the ladies at the desk gave me the same expression I have seen many times. I’ve been trying to find a way to explain it and I think I finally have it:

When I speak Spanish, people look at me like a parent looks at a child who is trying to count to ten for the first time. It is a look of silent hope and encouragement, willing the struggling speaker to choose the next word correctly. Each correct phrase almost elicits a response of relief from the listener. The look is not judgmental in any way.

They let me know that they do not allow camping right in front of their hotel area, but it is available on the rest of the beach. They were super helpful and very complimentary of my Spanish. (Though you would also complement a child who successfully counts to ten for the first time. The compliment does not imply any sort of overarching proficiency.)

I’m sort of at an awkward spot, but I think I’ll leave the post there. Next time I will have further pictures and descriptions of my own little slice of paradise. See you soon!

Realtime update: I’m still in San Cristobal and will be for at least a few more days.

Happy update: Our last post marked the 100th blog post I have made on this site. Yay! It almost hurts my head to think about how much time has been dedicated to this pursuit. Each post represents about 3-6 hours of work, so it has taken a huge commitment. Still, I believe it is worth the effort and I fully intend to keep writing, keep snapping, and keep recording. Thank you for all of the support over these hundred stories. There are sure to be many more!

13 thoughts on “Zipolite the Zany”