Our beaches get even more beautiful as we continue. We get to experience a sunrise over the Pacific, something very rare in the Western Hemisphere. Even now as I look at the pictures, I’m surprised I’m not still there. 🙂

When we left off last time, I had just found this alluring little beach called Playa Boquilla. I had decided that I was going to sleep there, but I wasn’t sure how.

After inquiring at the hotel that was going to be too expensive for me, I parked by the beach and walked around for a bit.

It was just perfect. The color, the sand, the surrounding scenery, the fact that it was so small and secluded. It almost felt like discovering a hidden gem. 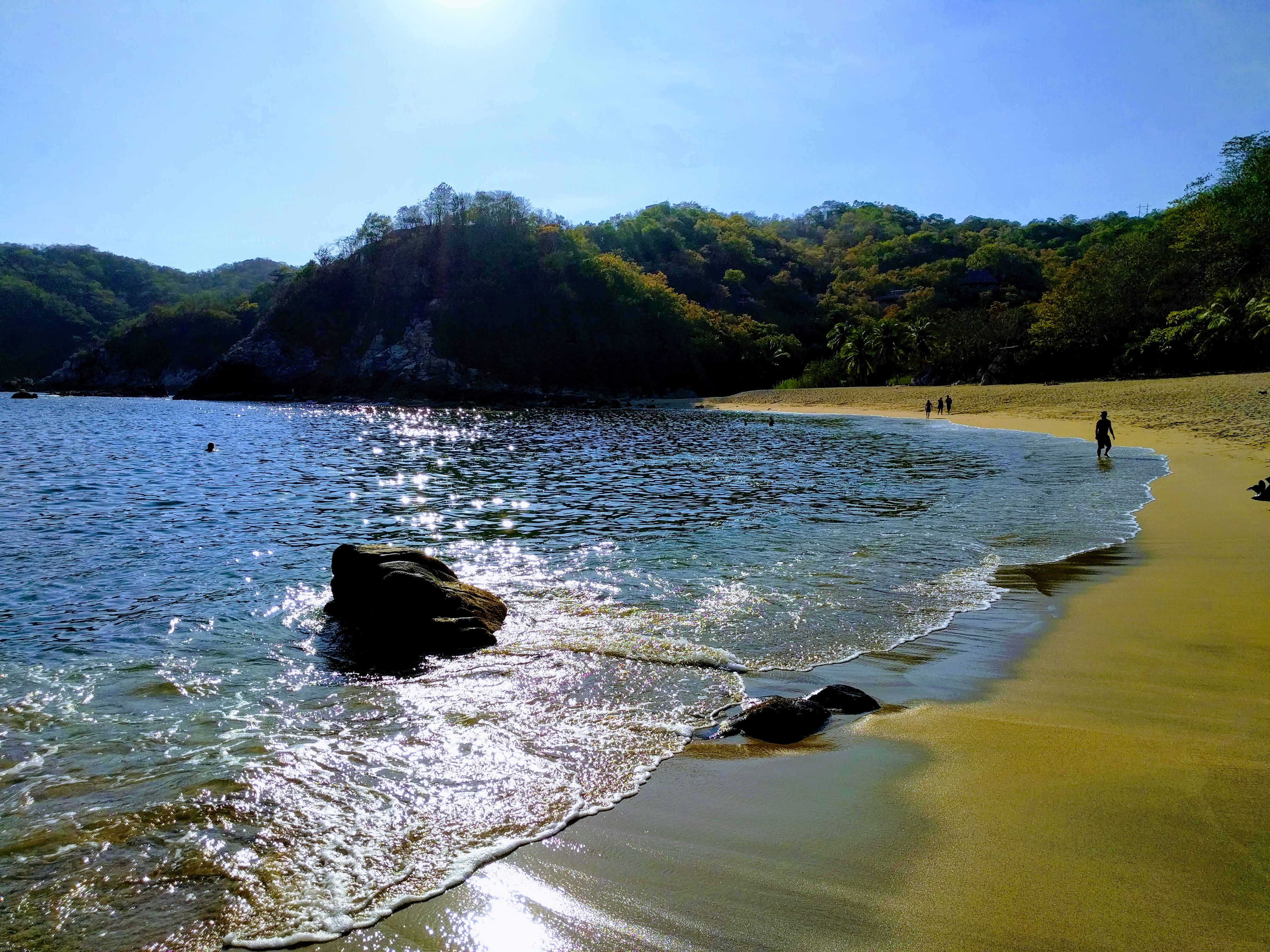 When I returned to Annie, she was being looked over by my new friend, Ted from San Francisco. He had been staying in the area for the last month or so, obviously really enjoying it. We talked about a lot of things, as we had some common interests. I asked him about camping on the beach and he said that he’d seen other people do it recently. He had no concerns about the safety. I also met another couple that shared the same opinion.

Generally speaking, I think a beach is a terrible place to stealth camp. There is absolutely no visual protection. On a busy beach, there could easily be a thousand people aware of your presence. Safety is just a numbers game, right? It’s always going to be rare that someone directs hostility towards you. But the more people that are aware of you, the more times you are rolling the dice.

But Playa Boquilla was so secluded, I thought the risk was very well mitigated.

I had made a slight miscalculation and had not secured enough water for the evening. This meant I would need to travel back to the city of Pochutla, more than an hour round trip. This trip also served to contact my parents and let them know my sleeping arrangement for the night (I try to do this each day). There was no cell service anywhere near the beach.

Restocked with supplies, I made the dusty ride again. I spent some time writing while sitting by the beach, but found it really distracting. 🙂

I talked to my friend Ted again. He informed me of a phenomenon which of which I was not aware: In the morning I would get to watch a sunrise over the Pacific Ocean. There are very few places on the mainland of the Americas where this is possible (Let’s see: Baja, western Alaska, that little nub on Panama…anywhere else?). How neat! I don’t even need to go to Japan to experience it!

Once daylight began to wane, I decided to set up my tent. I really wanted to have Annie right next to me, so I took her out on the sand. I wondered if that decision would have major consequences down the line. 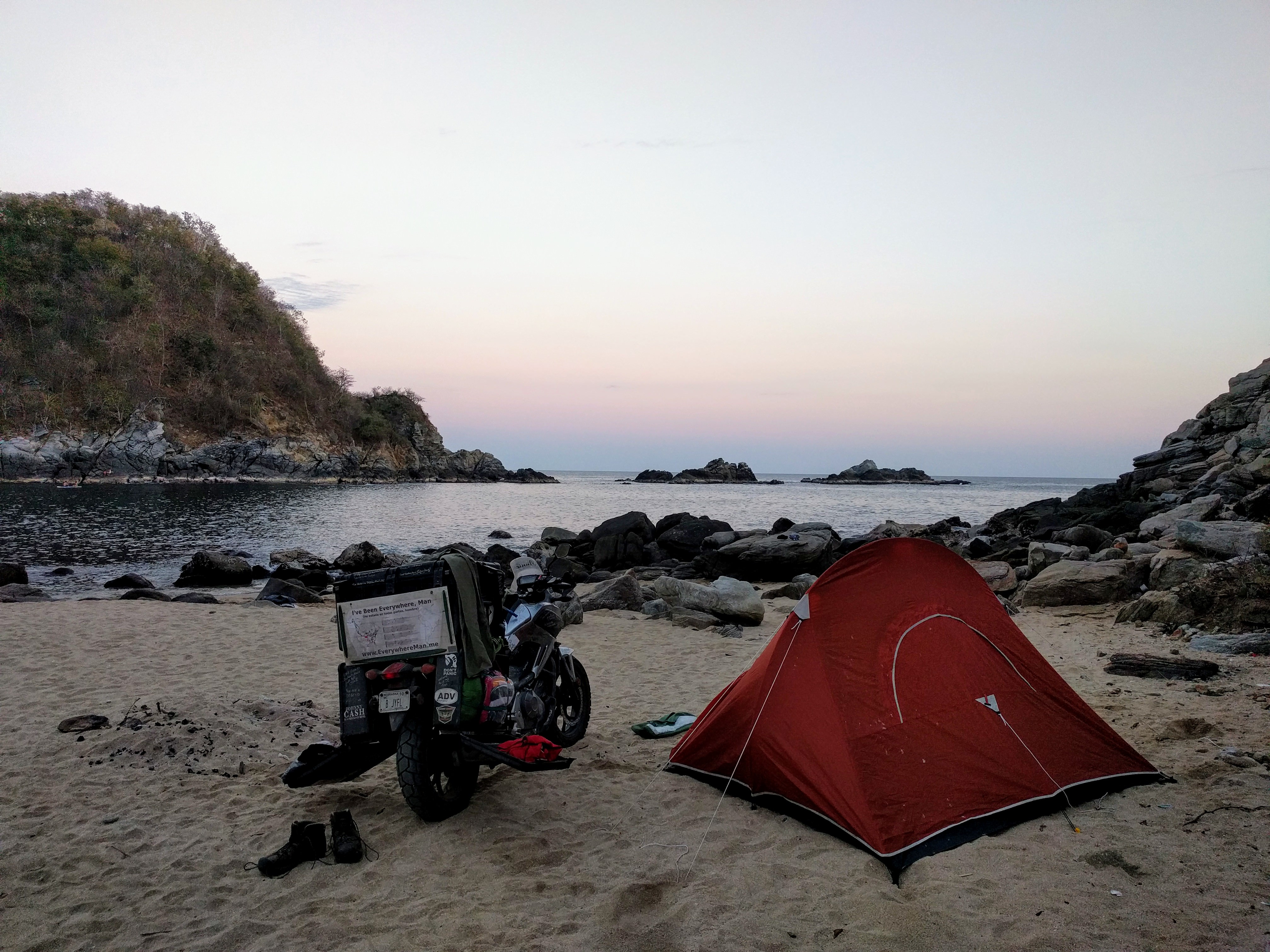 I bought some special stakes just for this chapter of the trip. 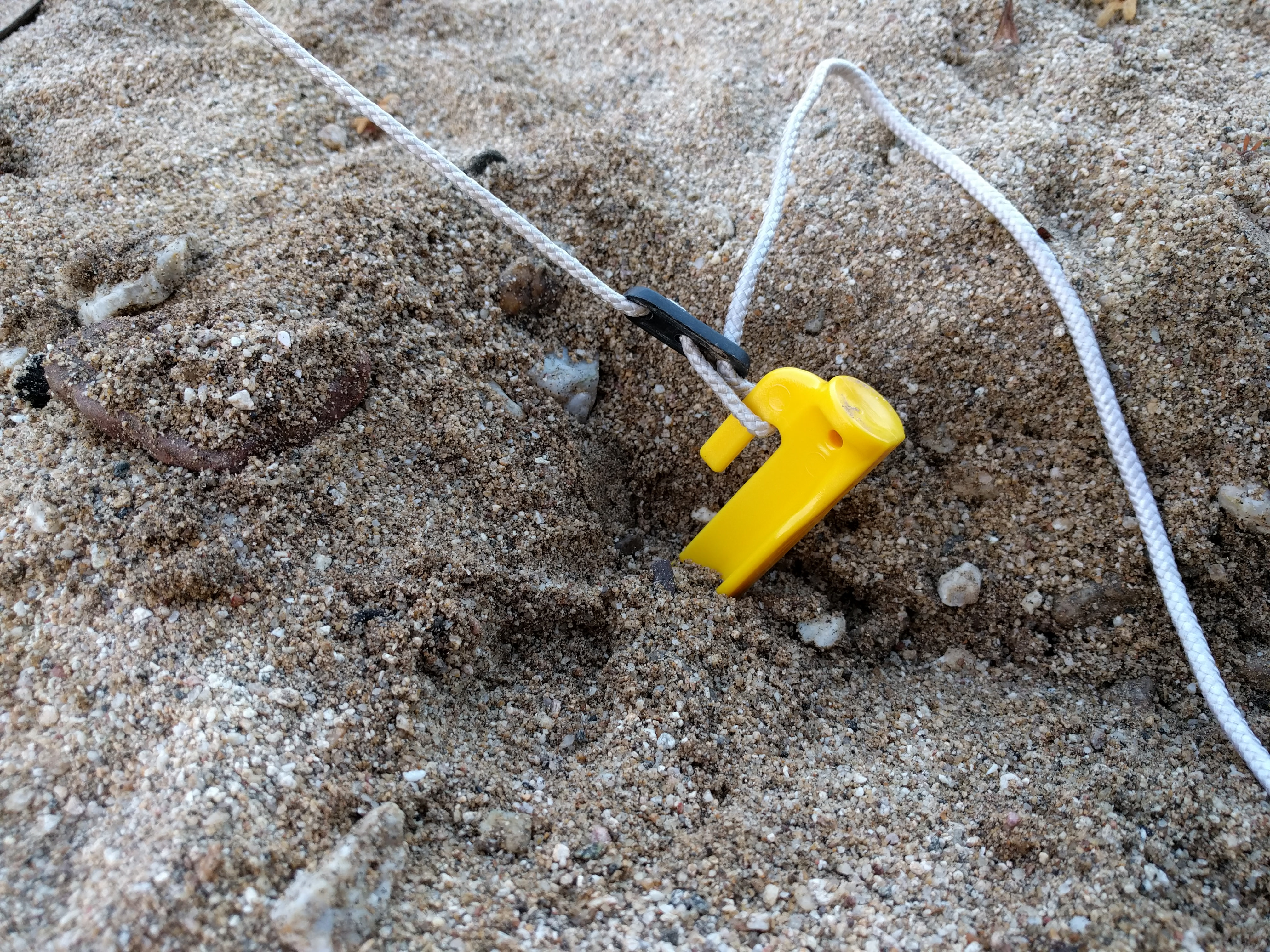 View from inside the tent: 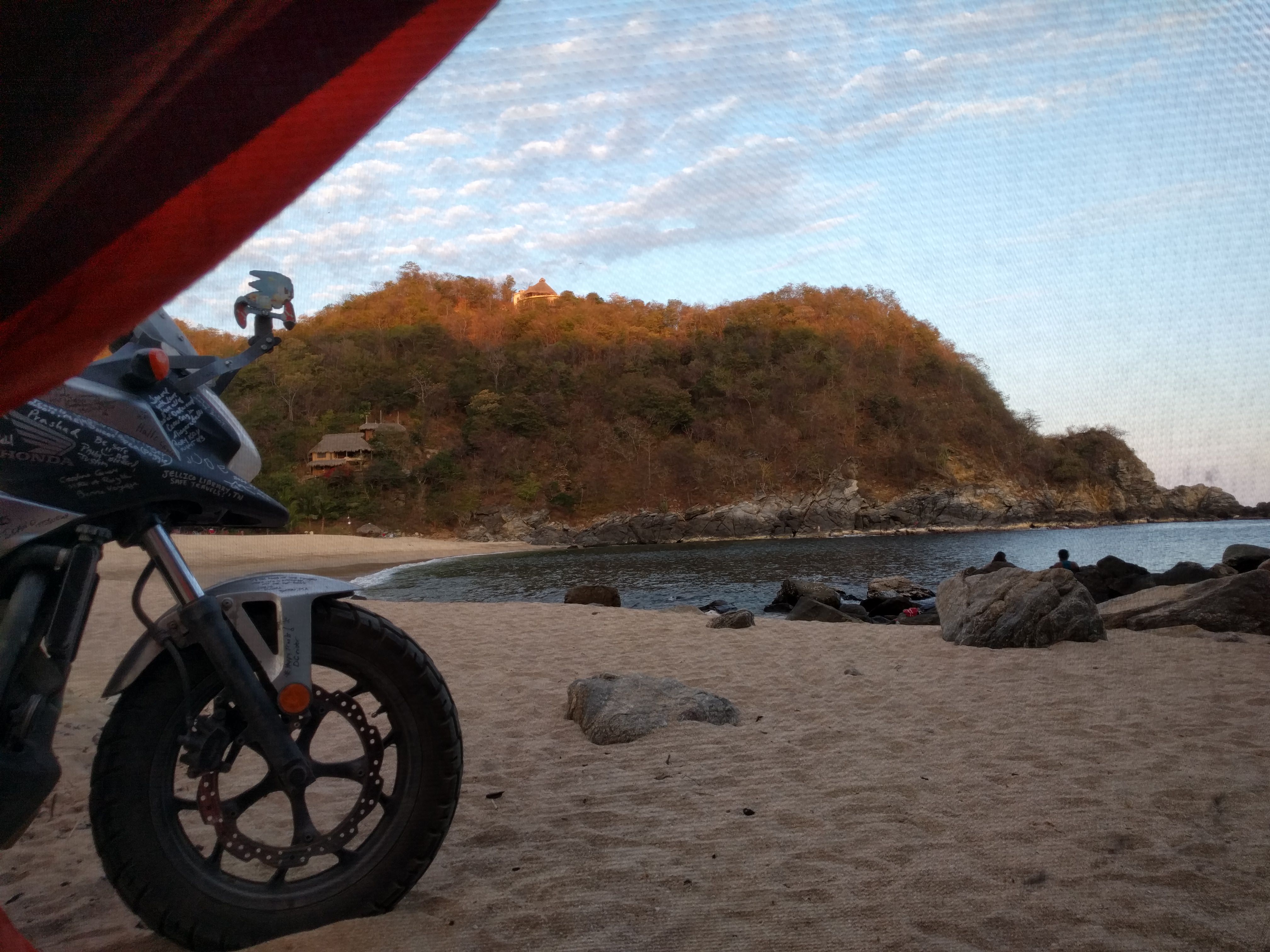 A group of locals (I assume) came to spend some time at the beach around dusk. I asked them about safety as well and they seemed to think it would be fine. But a little while later, one of the guys approached me asking if I had a knife. I thought it was a remark directed at my potential safety, but they just wanted to use it for cracking open some of the things they were catching (mussels of some sort? not sure).

I had the last of my MREs and enjoyed gazing on the waves. 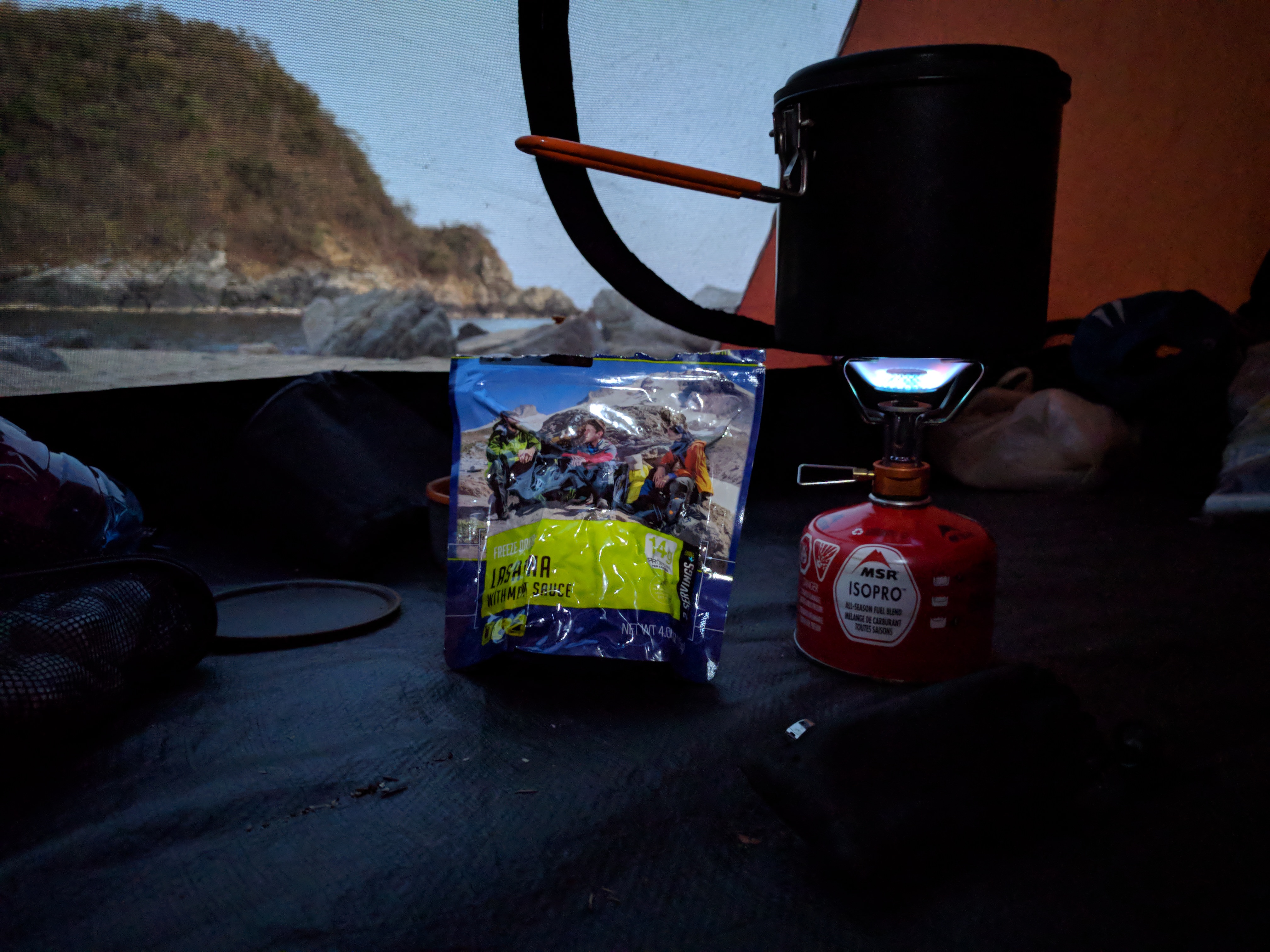 I’m not sure if that one was from Mom and Dad or from Jared and Michele, but thank you both!

I did a little typing and called it a night.

My night was a little restless, but I got enough sleep. I was up a bit before sunrise in order to catch the Pacific sunrise. 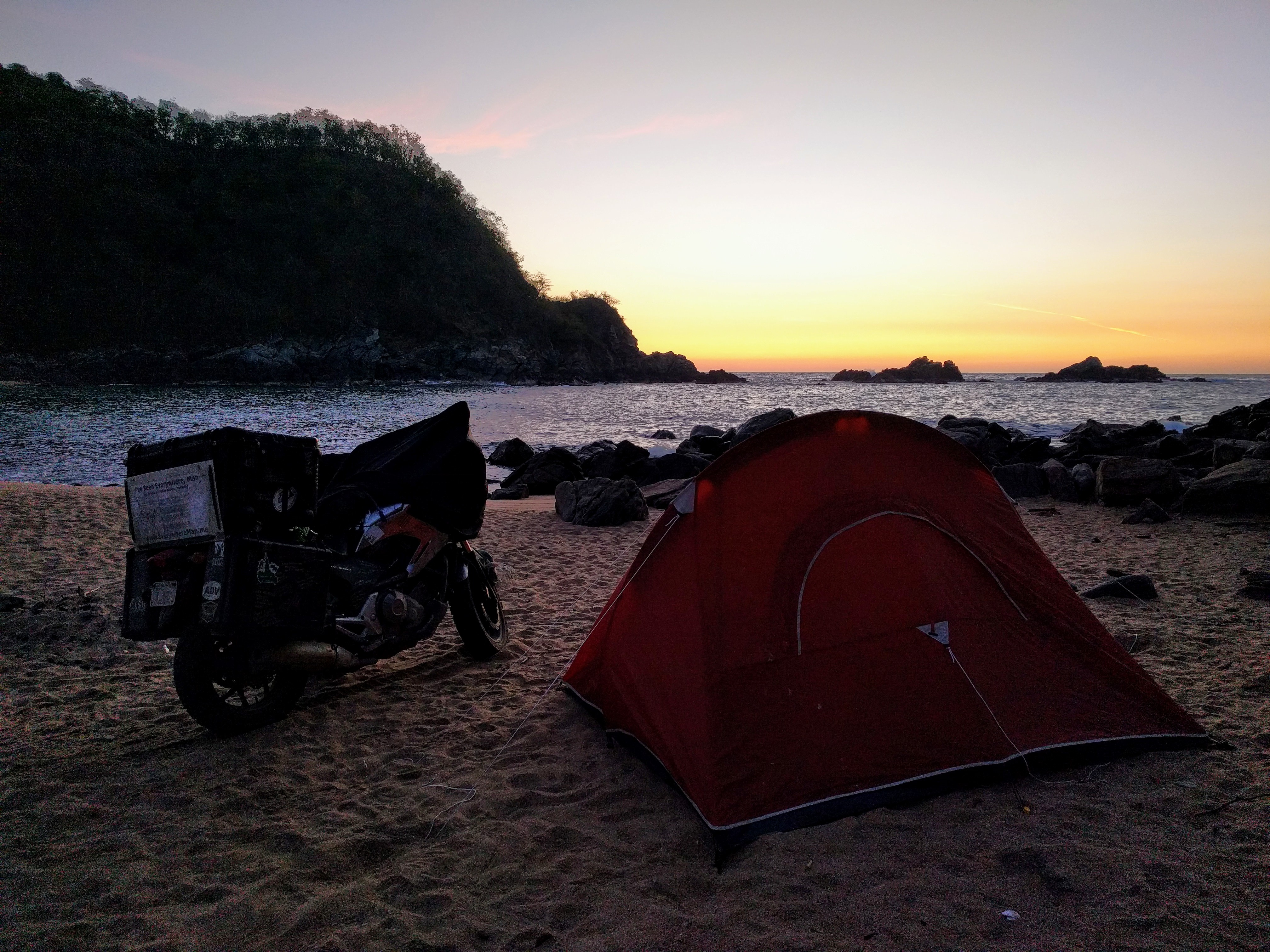 I decided to hike out on the rocks to get a little better view, in case it would be blocked on the beach. While doing so, I disturbed hundreds of little crabs. They skittered around in front of me with each footstep. They were really difficult to photograph! 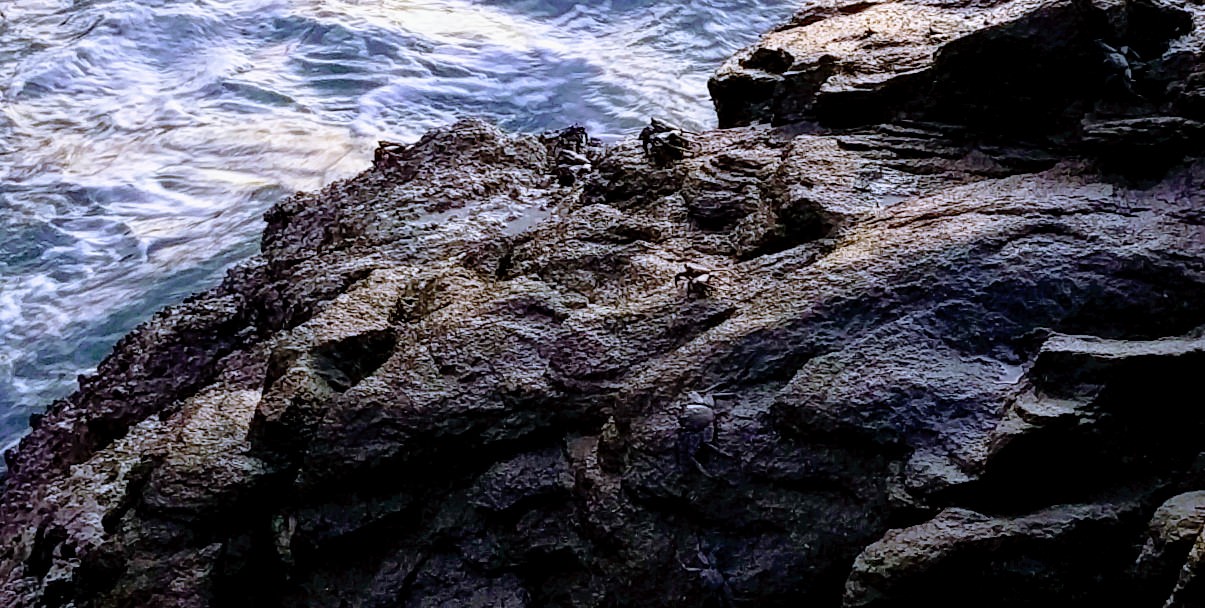 I climbed up to my little perch with a few minutes to spare. Looking back: 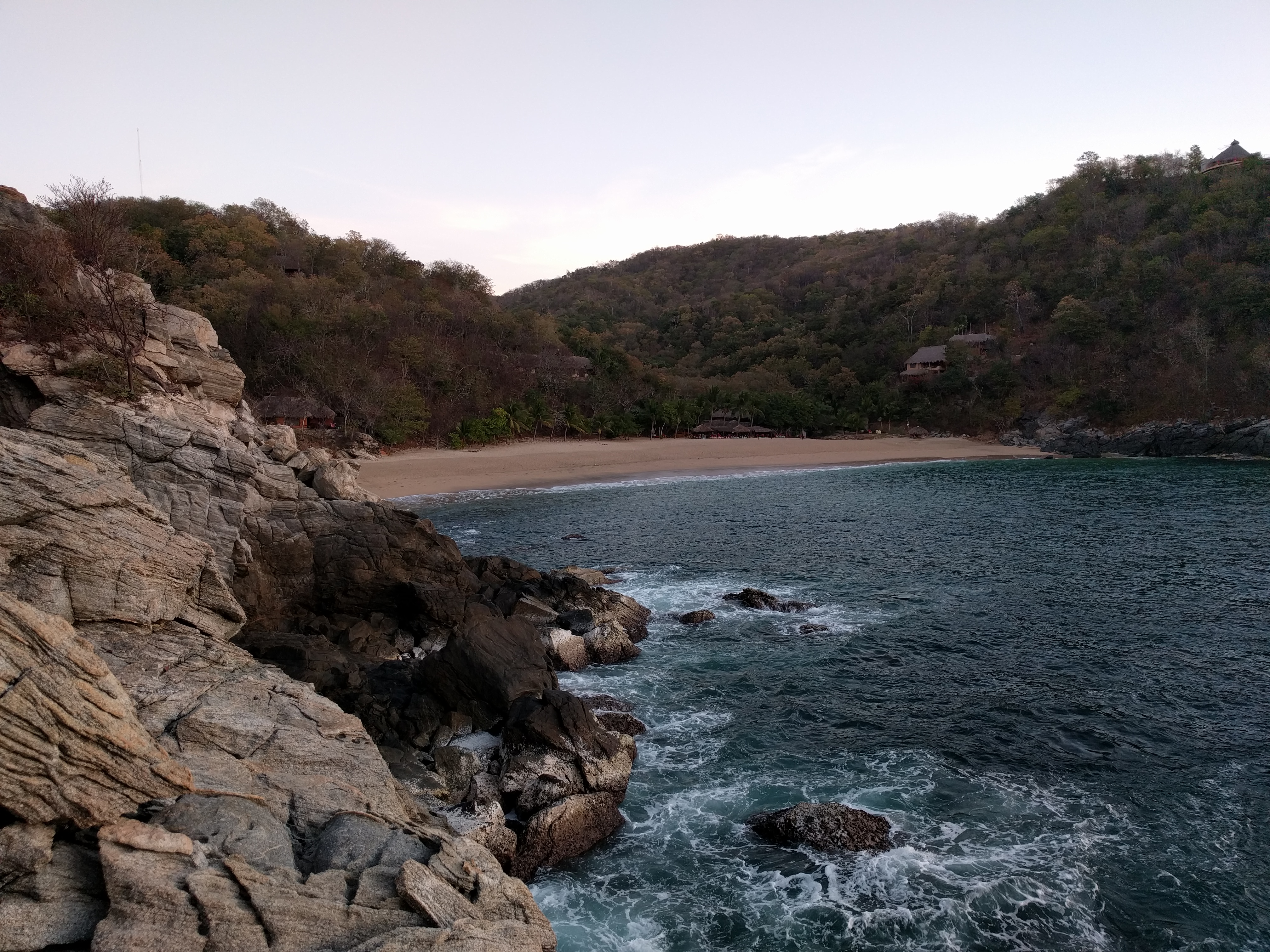 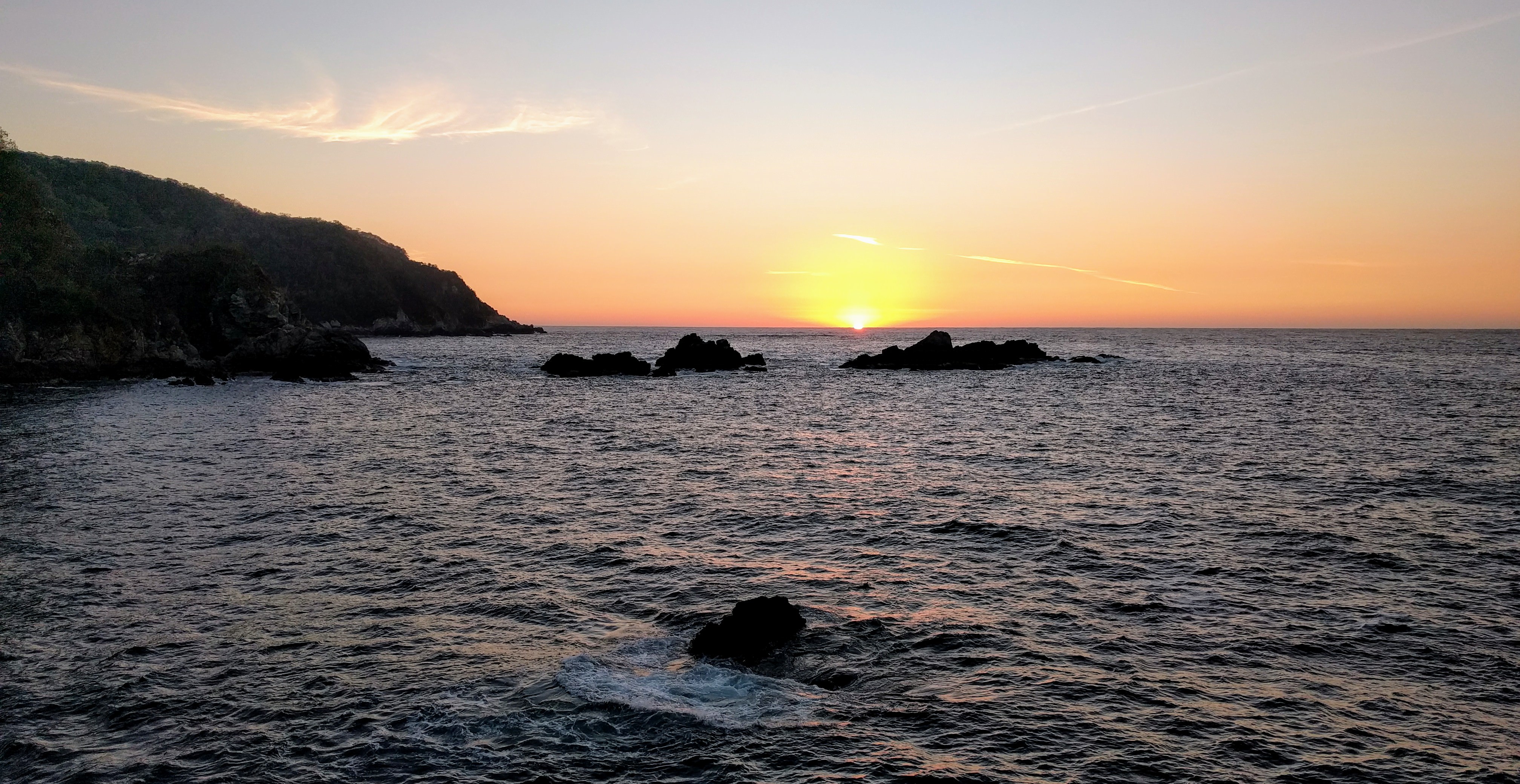 “Why didn’t I pack my eclipse glasses!” 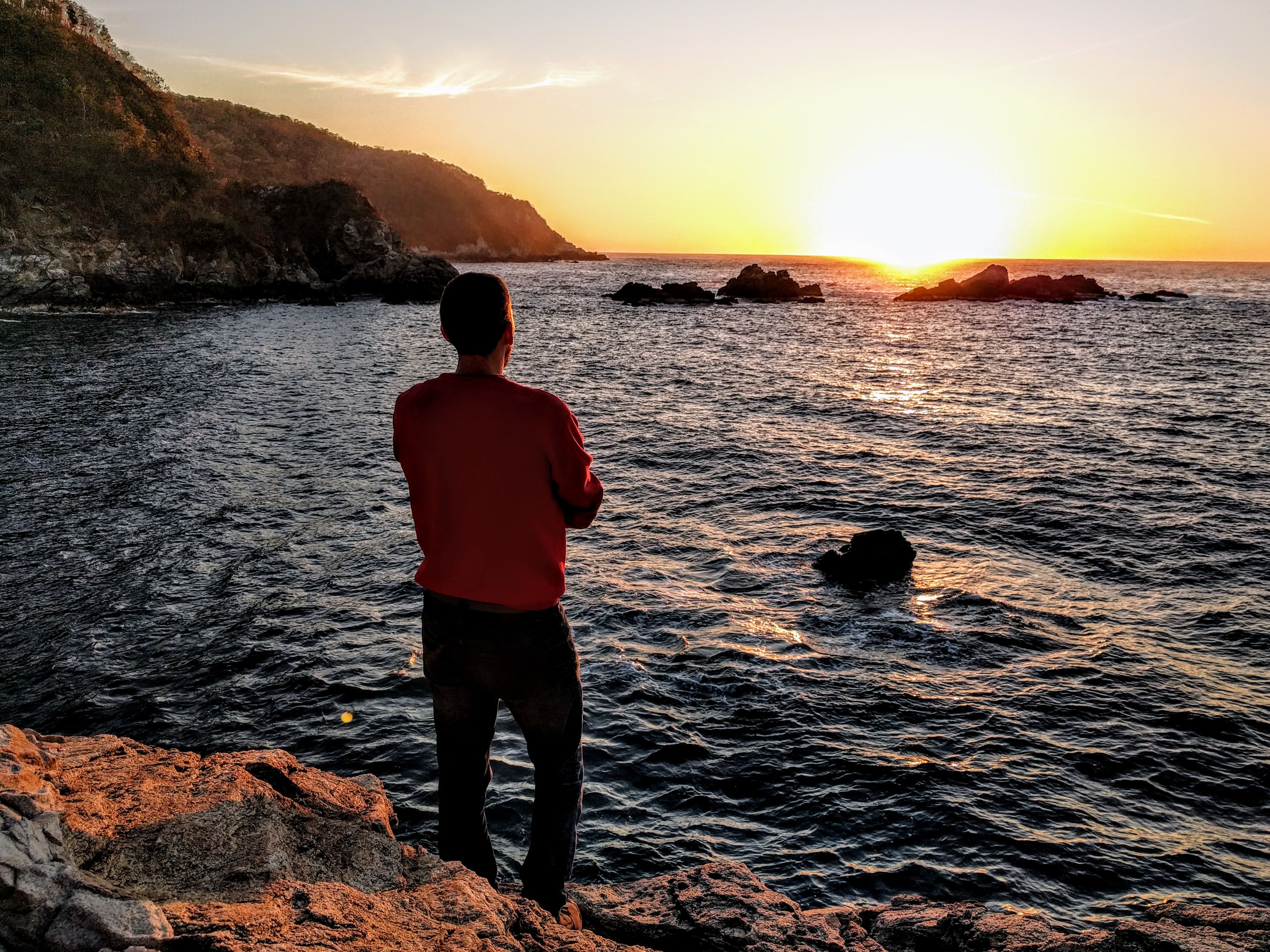 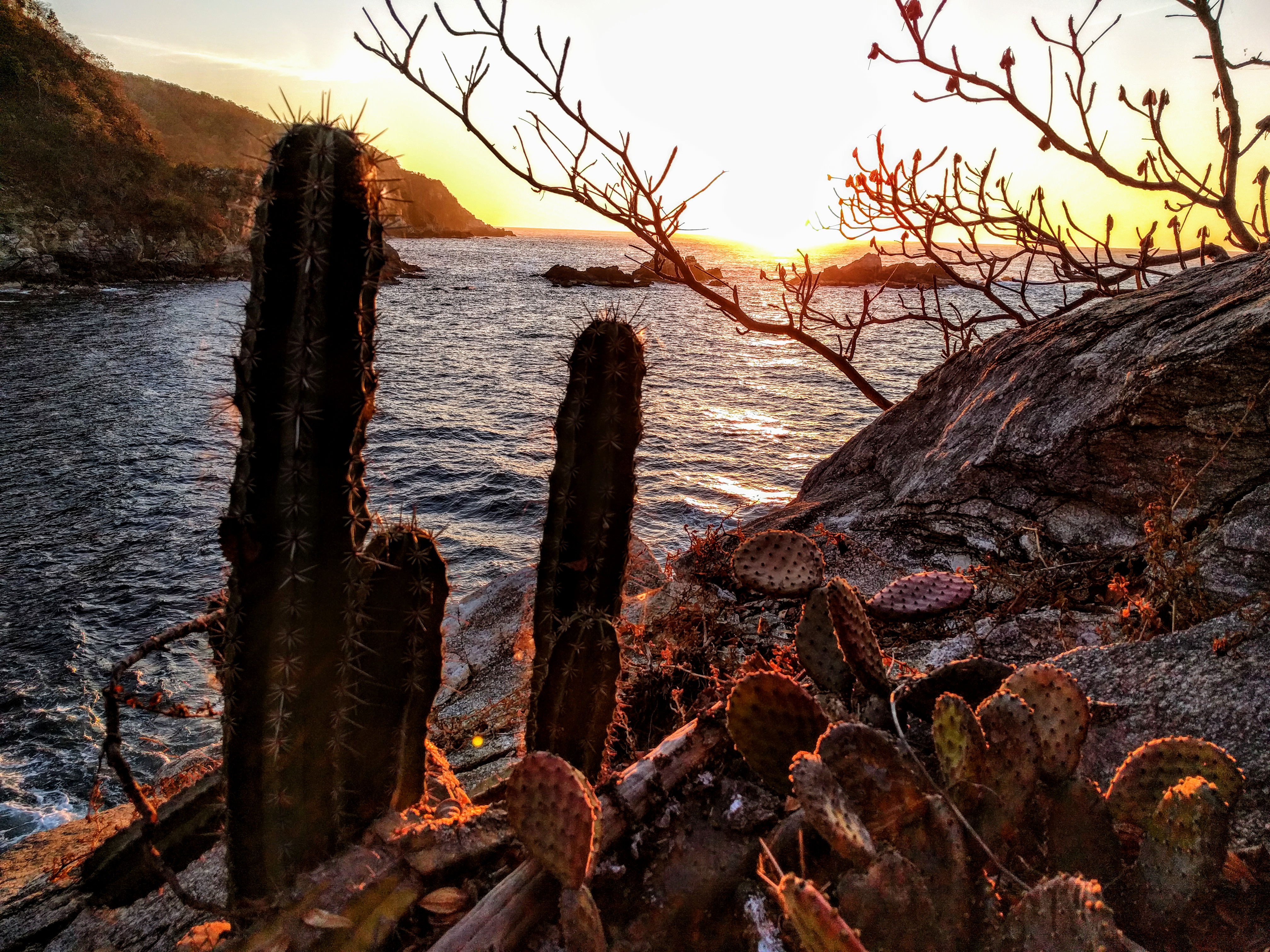 What a neat experience! 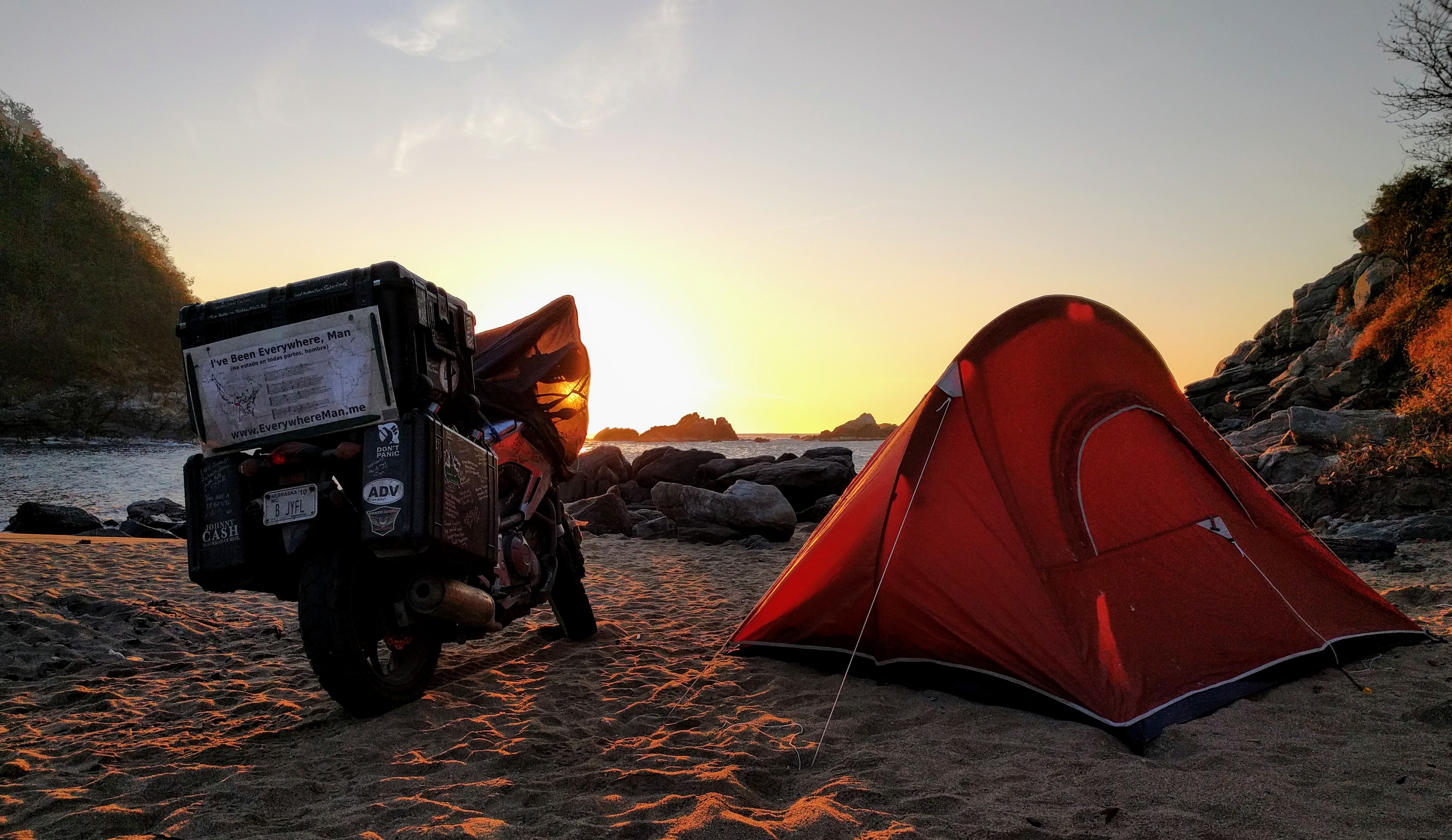 The other end of the beach was in shadows for quite awhile. 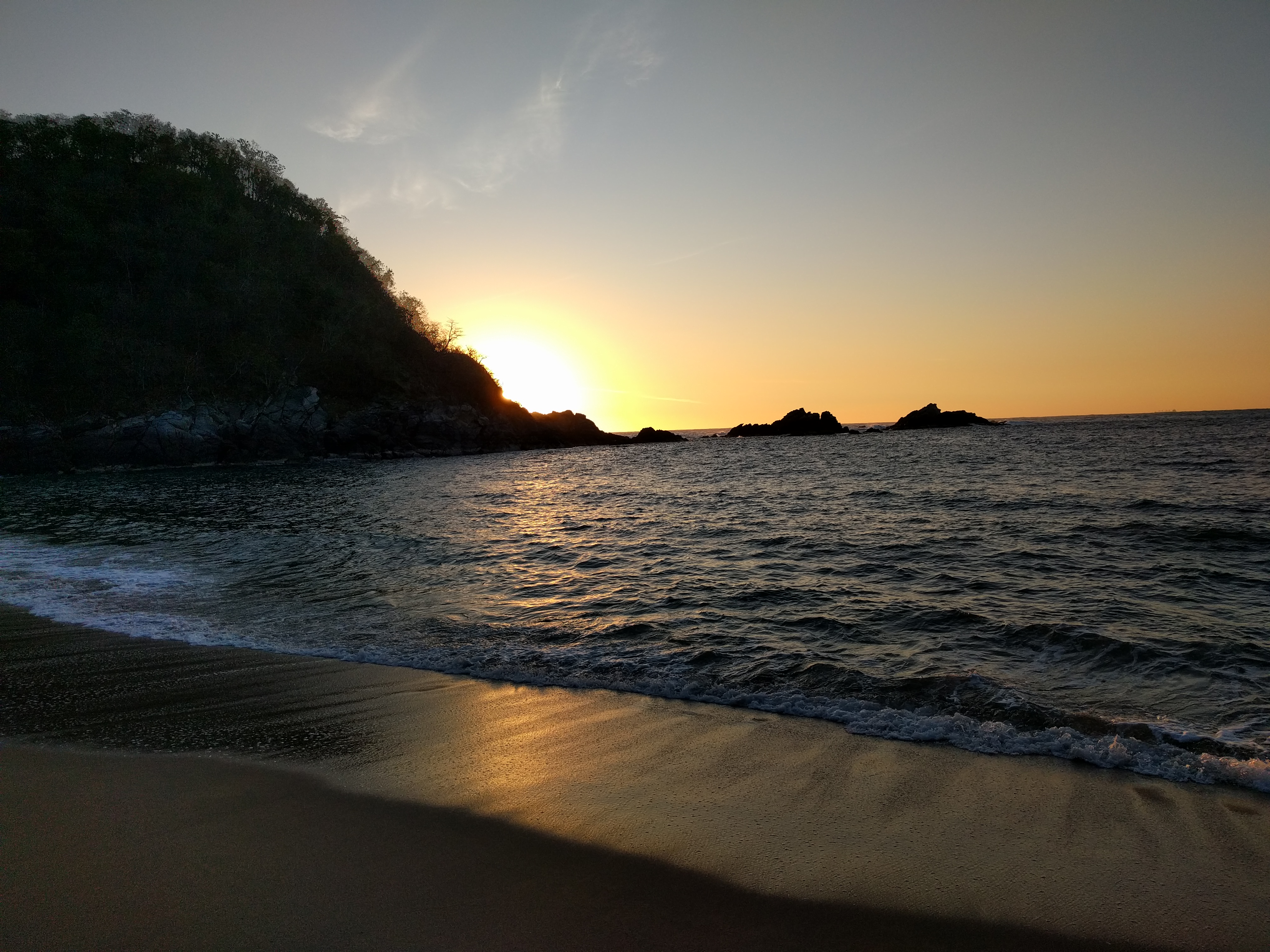 I made myself a french press of coffee and sat there feeling quite satisfied with my life. After a little breakfast, it was time to solve a problem.

I knew taking Annie so far out onto the sand was probably a bad idea and now I needed to get her back to solid terrain. It’s possible I could have used engine power and done a U-turn, but that would have taken me further into the sand. I decided to reverse by hand. She’d sunk in a decent amount over the night. 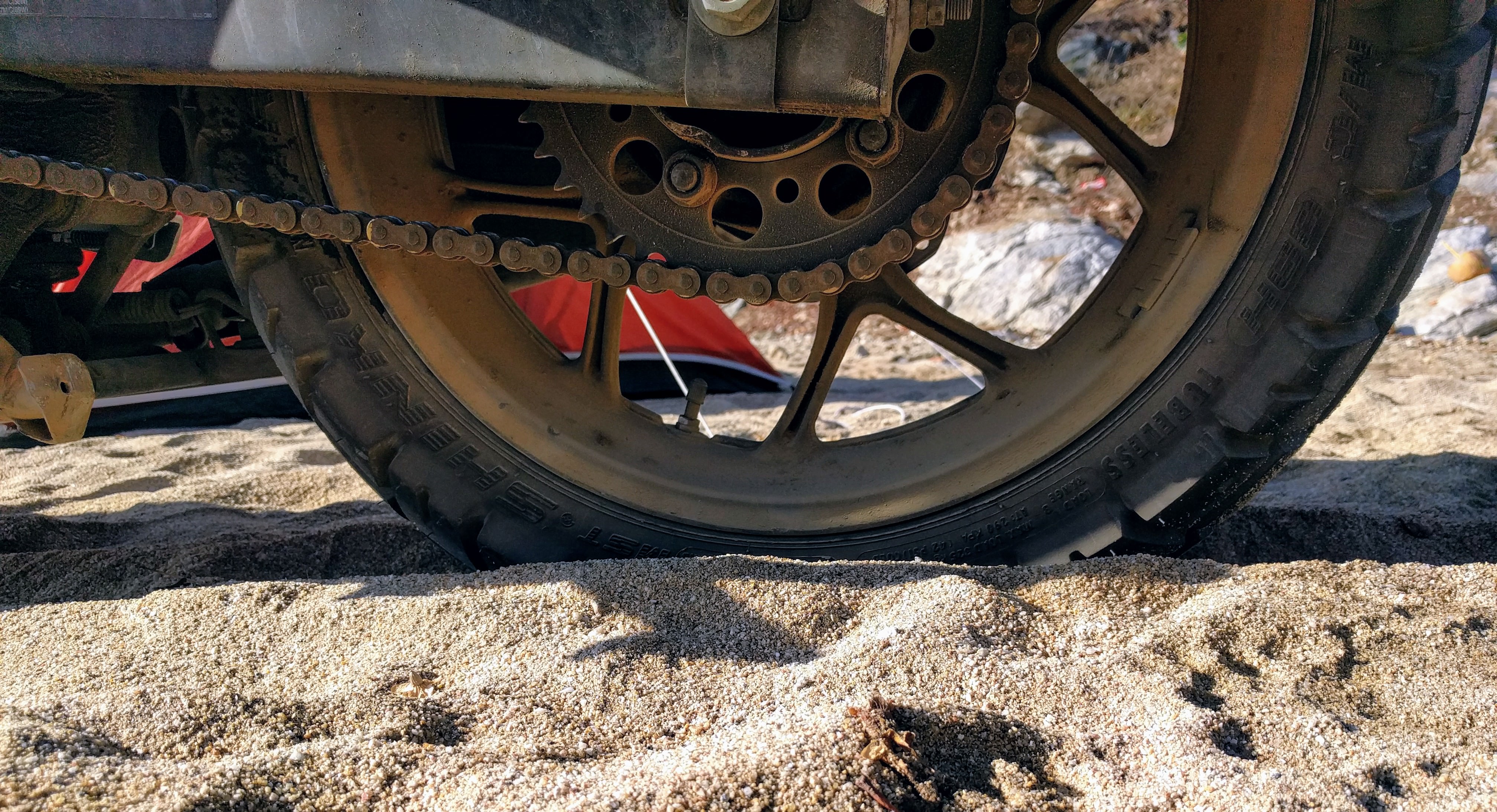 Before I even began my attempt, I dug a trench by hand. I wanted to remove all of the loose surface stuff and get down to the damp sand. It’s much more firm. Time for some early morning power lifting! Drive the legs!

It was probably about a half hour process. Lesson learned? We’ll see. 🙂

But I still had another problem: I could not manage to stay out of the water. I would pack for a bit then think, “Hmmm….I’m kind of warm. I should go swim for a bit.” I met a really nice family from Chicago who were enjoying the beach too. We had some good chats, but I guess I never took their picture.

One swim, I decided to take my helmet cam. Can we all agree that the spinning, water, video selfie is one of the more underrated members of the selfie family?

I hope someone gets this: 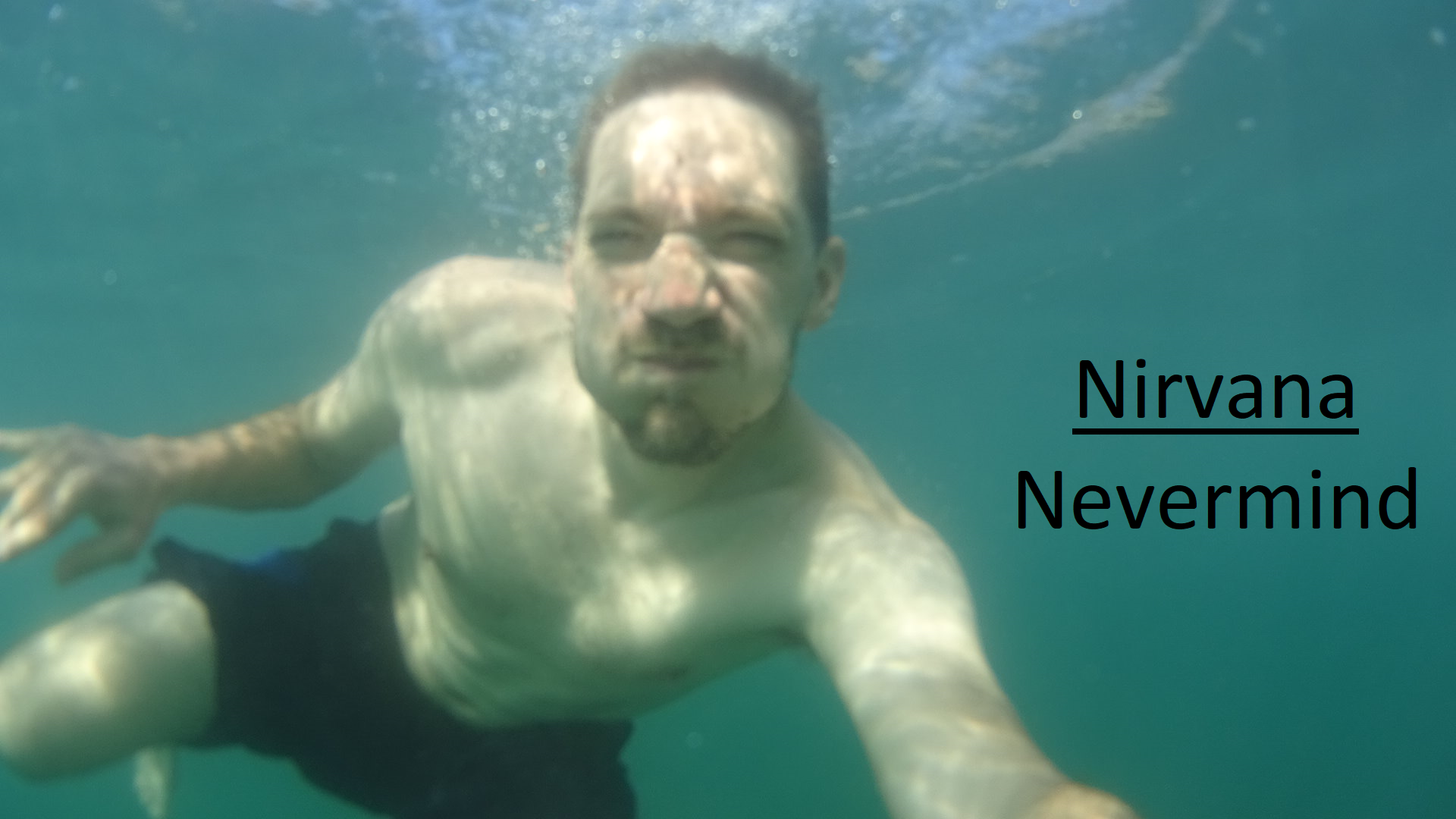 (I know…too old and too many clothes)

It was a bit difficult to leave this place. If I had felt 100% secure camping there, I probably would have stayed another night. Furthermore, I have a bit of difficulty getting into the “beach mentality.” I’ve been so focused on traveling efficiently for months, that fully relaxing can be difficult. But I don’t think this beach is going anywhere. I’ll be back. 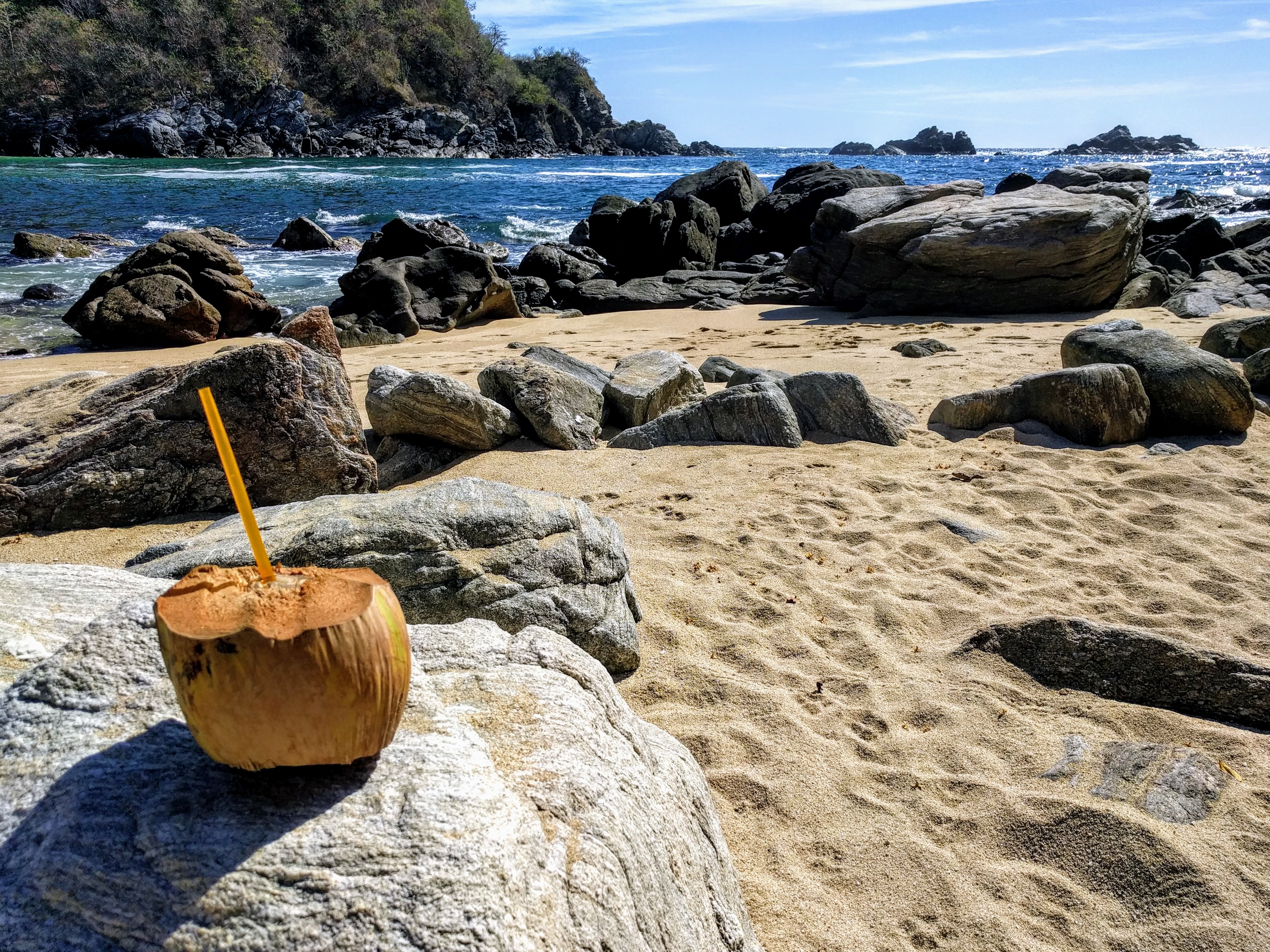 As I wound my way over the cobblestones and up the dusty road for the last time, I bumped into my friend Ted for a final time. This was great so I could thank him for the sunrise tip and have him sign the bike. 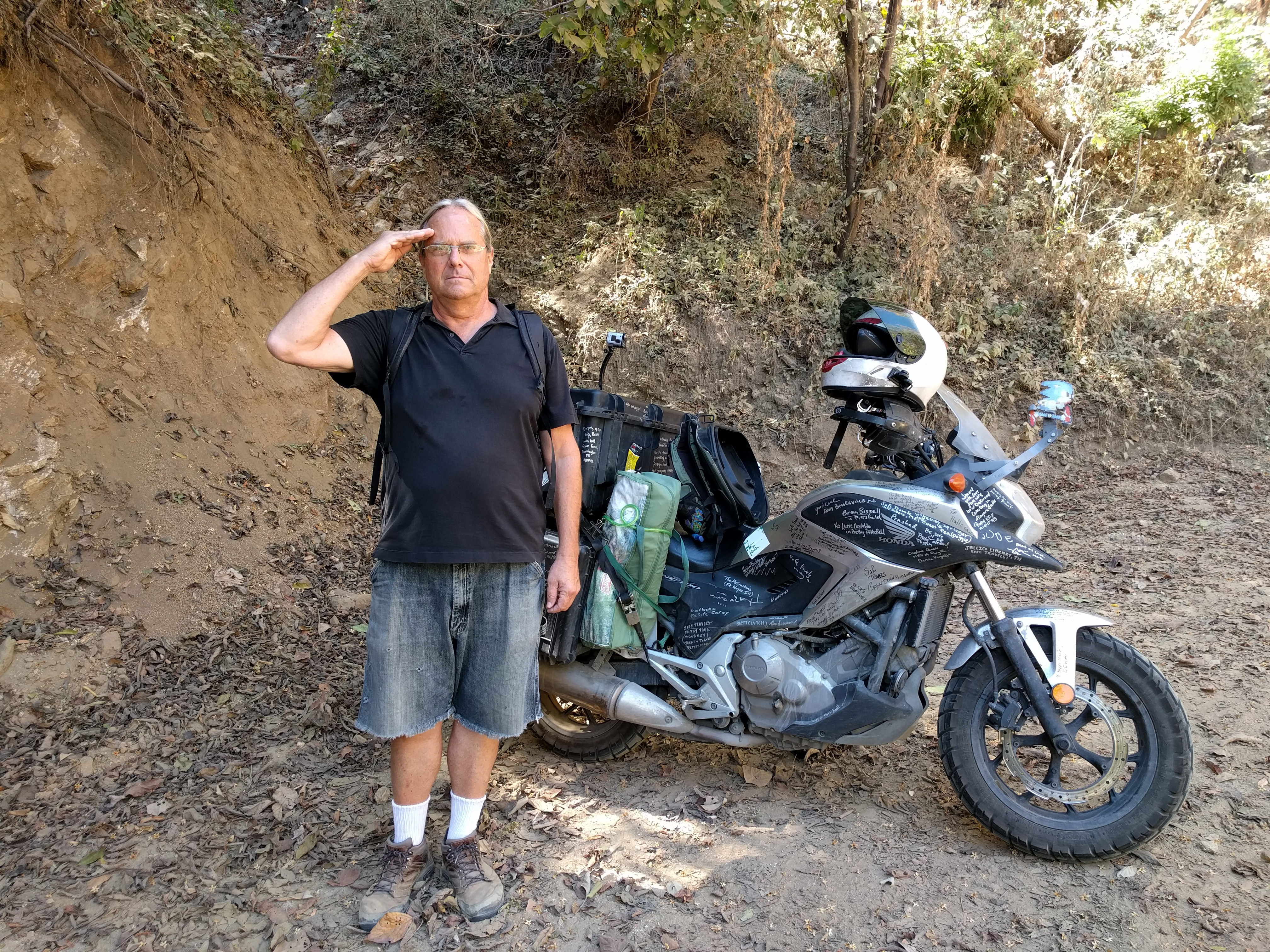 I traveled the road to Pochutla so many times that I was now giving names to each one of the topes. This is appropriate, since each one of them has a distinct personality. At least it was a nice road to ride. Since all of the female followers of this fine publication have been pining for a return of the “girlfriend cam,” here you are. (Hey, journalistic integrity was dead by the time I got here. Don’t blame me.)

I was heading north all day, which seemed a little counterproductive.

The road wasn’t really coastal, as the ocean could only be glimpsed a handful of times. Still, it was a nice ride. But as the afternoon wore on, I began to experience something strange: Wind! It should be noted how rarely I write about wind in this quality publication. This is probably because oppressive, blustery days are just a normal thing where I’m from. The wind this day wasn’t quite up to Great Plains intensity, but it was quite stiff.

On one of the numerous curves, I felt a wobble coming from my front end. I was almost sure that I had a flat. I pulled over right away and nothing looked wrong. I checked pressure just to make sure. Whew…disaster averted.

Whenever you stop by the roadside in Mexico, it is always a good idea to glance at the trash to see if there is anything interesting laying around. This stop provided an entertaining find. 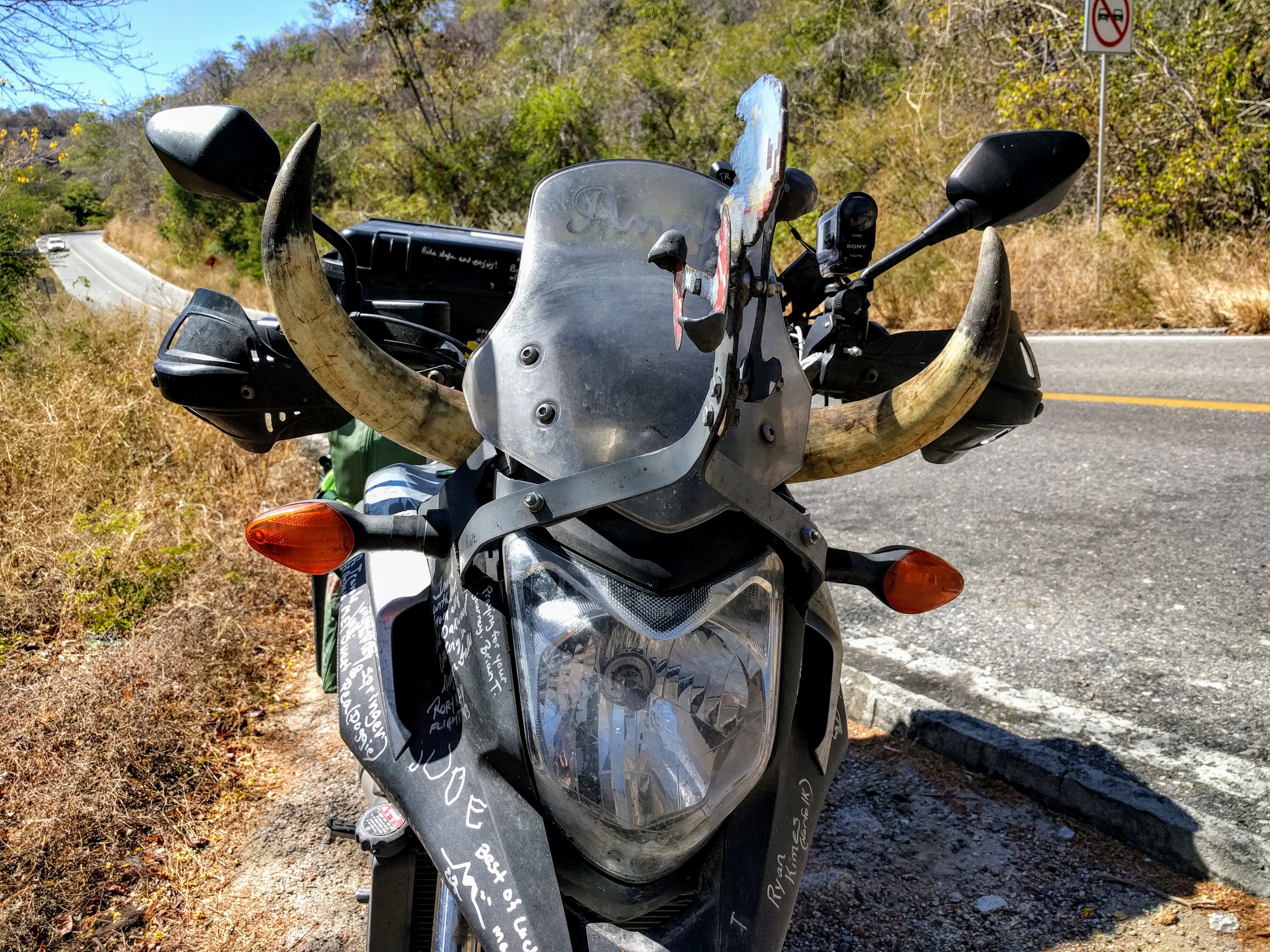 I actually think that looks quite good. 🙂

Around 3pm, I reached the city of Salina Cruz. I expected there to be plenty of lodging options here, but it turns out that it is much more of a port city than a beach city. Most of the hotels were more expensive than I would prefer, so I began looking at some AirBnBs. I found a nice one where the owners responded to me right away.

I navigated to the home of Xochi and Avel. 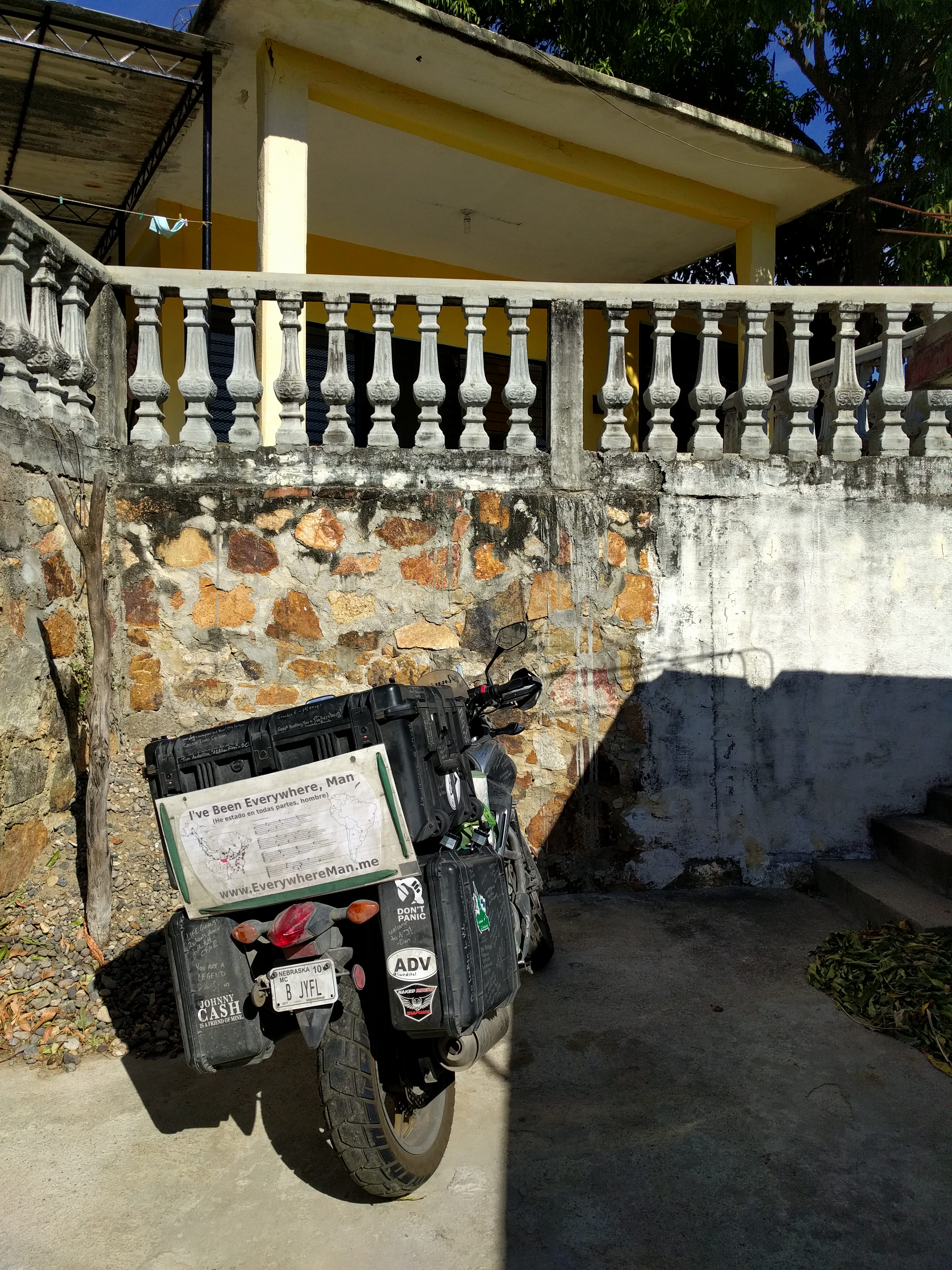 They are a really neat couple. She is Mexican and he is from Spain. Avel also teaches English classes, so we had lots of fun talking about language and a variety of other things. They were very generous, making sure I had food and anything else that I needed.

I was enjoying my time with my hosts, so I lingered for awhile in the morning. As Avel and I were discussing some language concepts, he transitioned into full on teacher mode and began using his whiteboard. 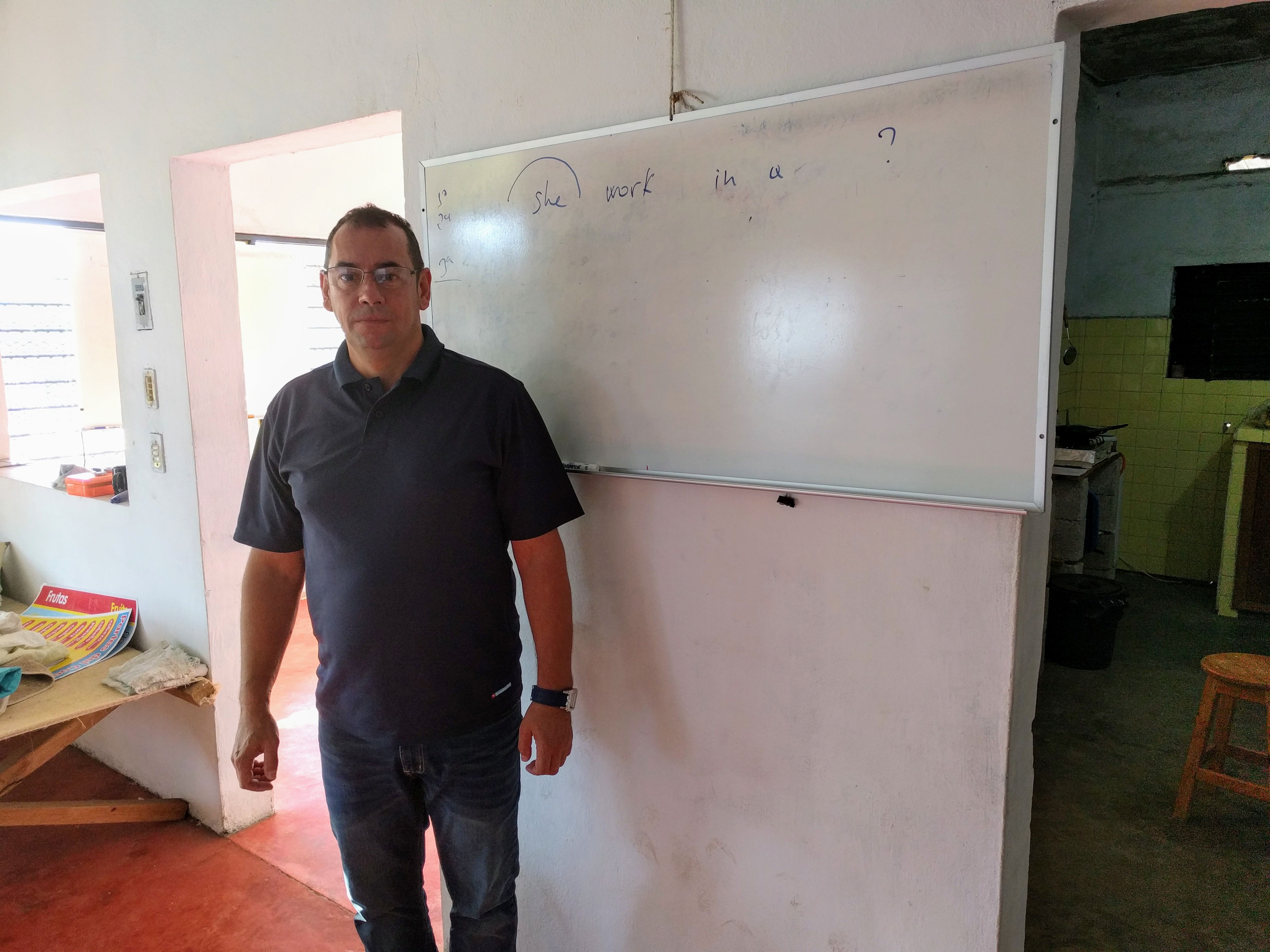 I can tell that he is a great teacher! 🙂

Around 10am, I was finally ready to go. If I pass through Salina Cruz again, I know where I will be staying! 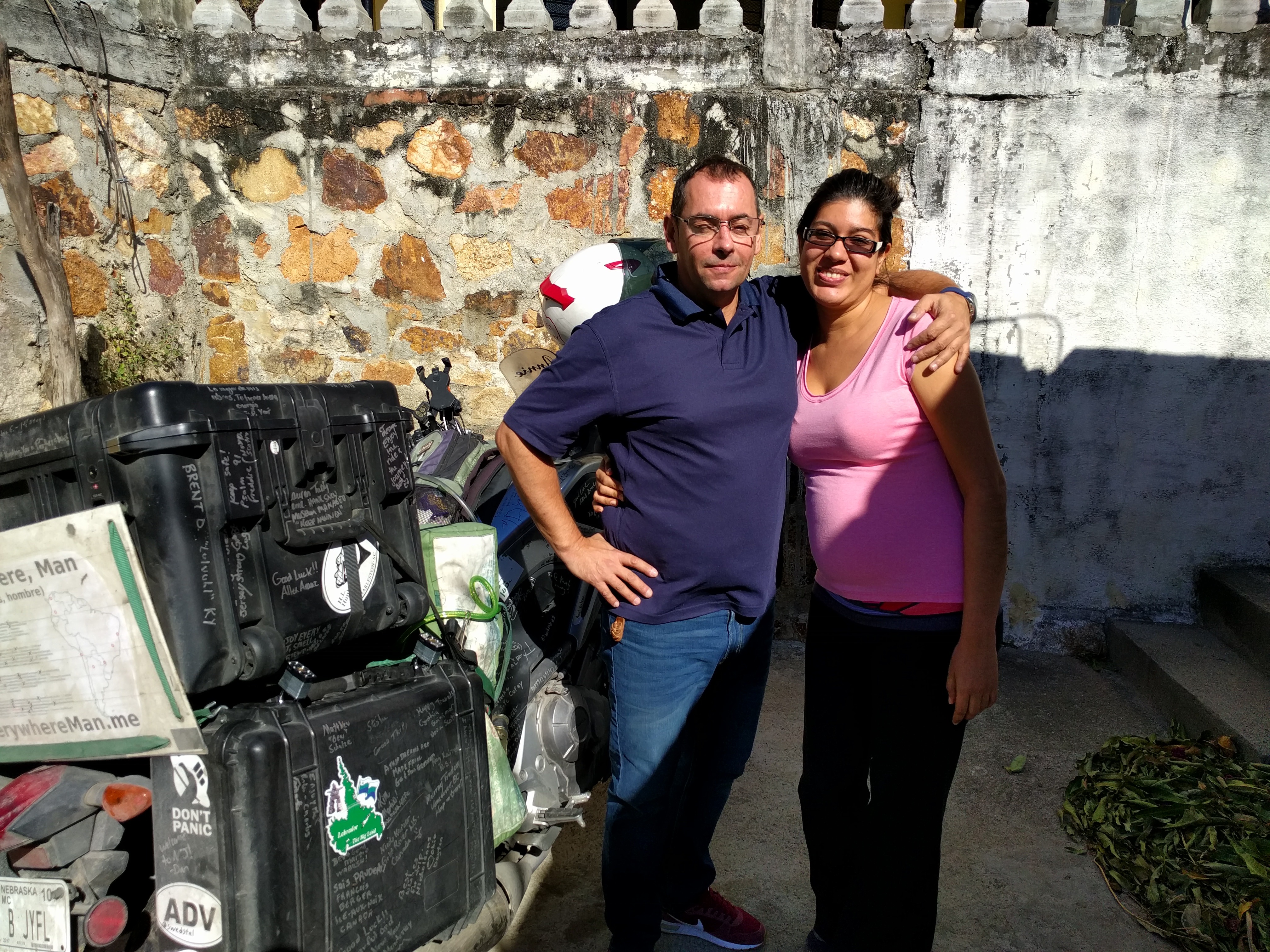 Route for the day:

My day on the road was much like the previous one: Really windy. It was definitely the windiest day outside of the plains on my trip so far. It does not appear that this is out of the ordinary for the area, as I drove passed one of the biggest wind farms that I have ever seen. 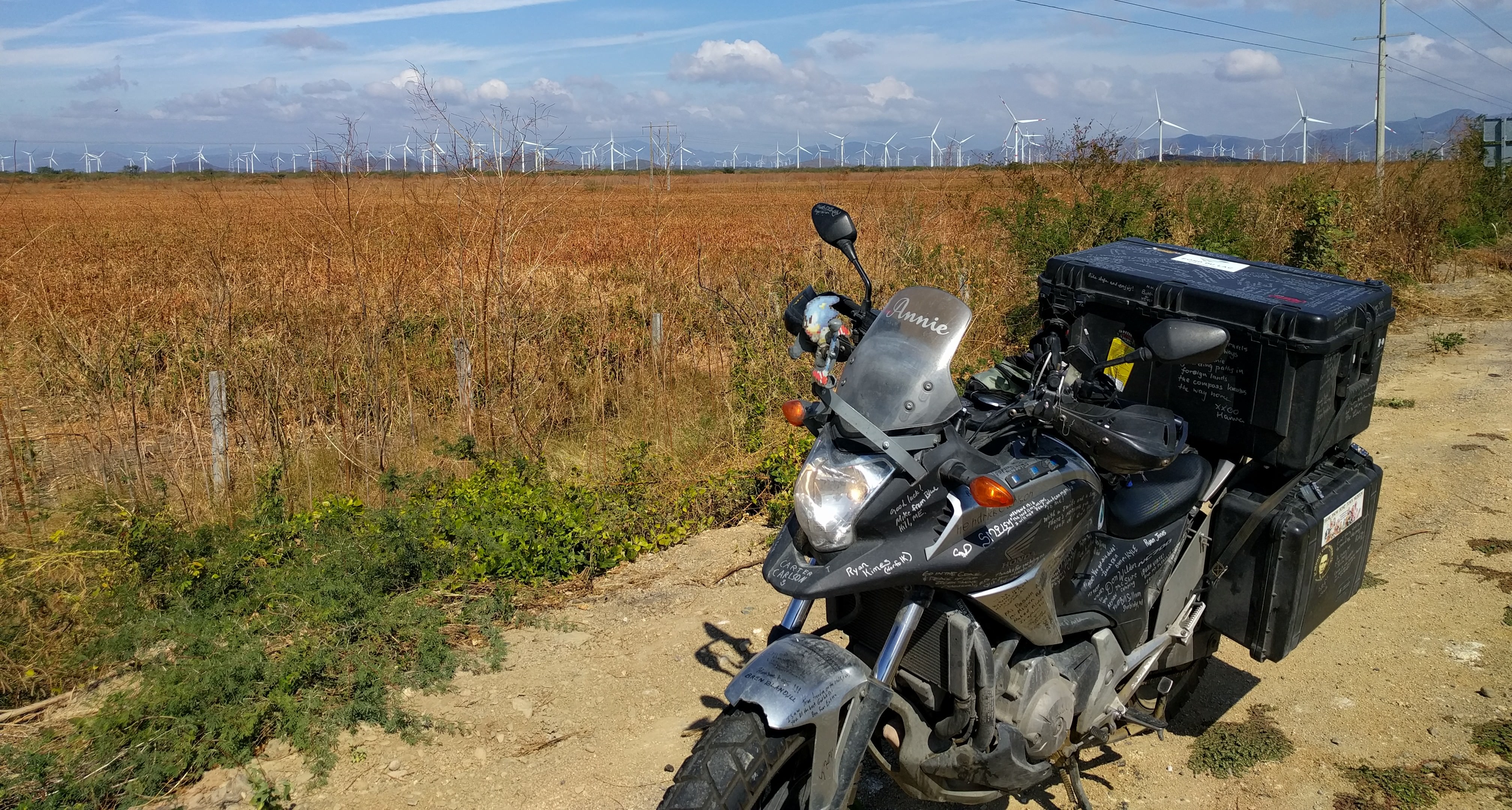 Indeed, it is the largest wind farm in all of Latin America.

When Sonic’s legs spin at a rate close to the frame rate of the camera, some weird stuff happens: 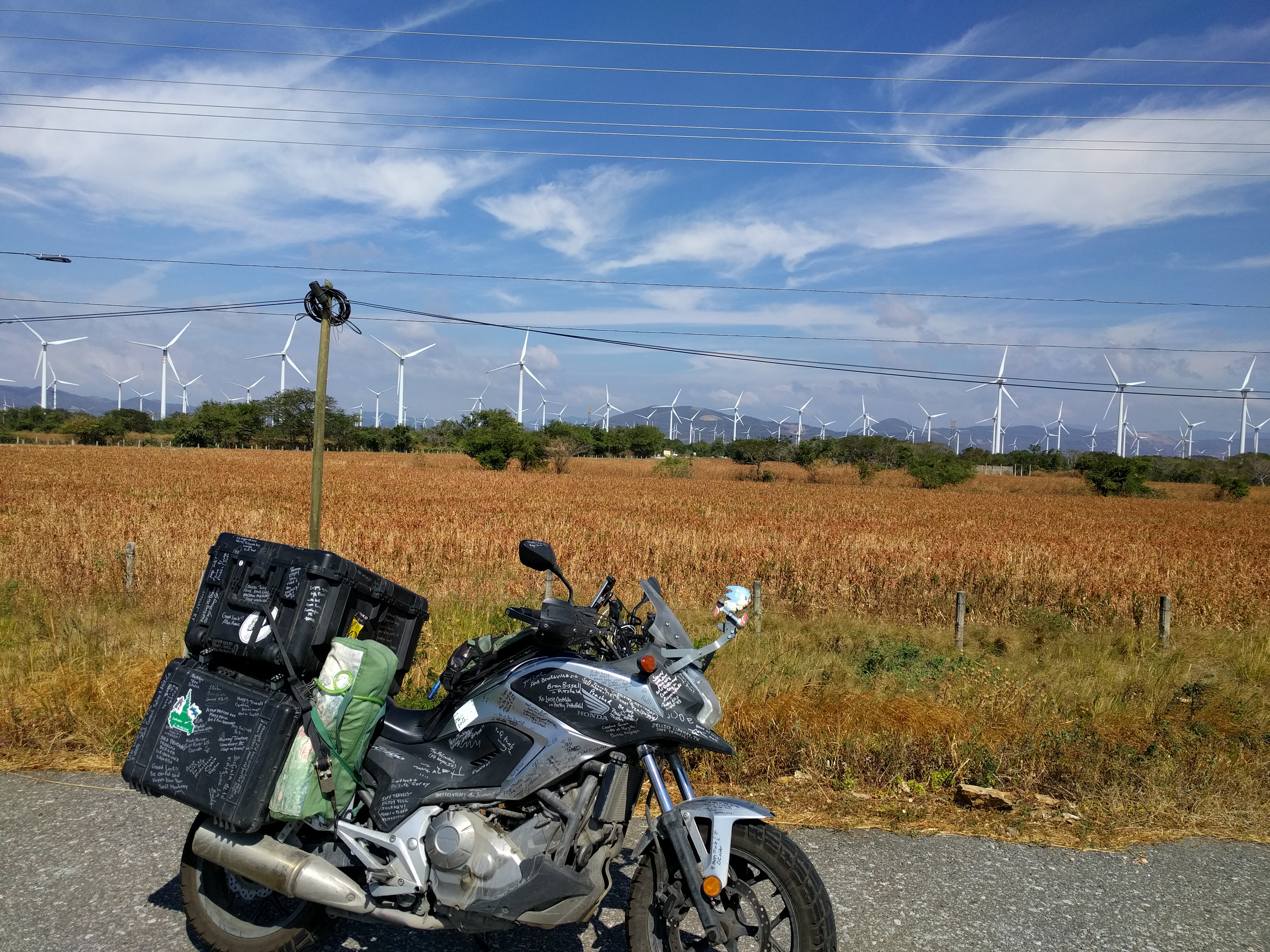 It was a pretty miserable ride, but I’ve been been quite spoiled recently. In a way, though, the conditions sort of felt like home.

As I left the state of Oaxaca and crossed the border into Chiapas, the road got a little more interesting. A few posts back I mentioned that Oaxaca ranks second to last in terms of per capita GDP. Chiapas is the state which ranks below it. This state has a large indigenous population and is full of natural wonders. You’re going to like it. 🙂

My first stop was in the biggest city in Chiapas, Tuxtla Gutierrez. This is not really a touristy area, but it served as a nice jumping off point to visit my next attraction: The Sumidero Canyon.

I found a hotel that was a little nicer than I am used to, but it was still only about $15. 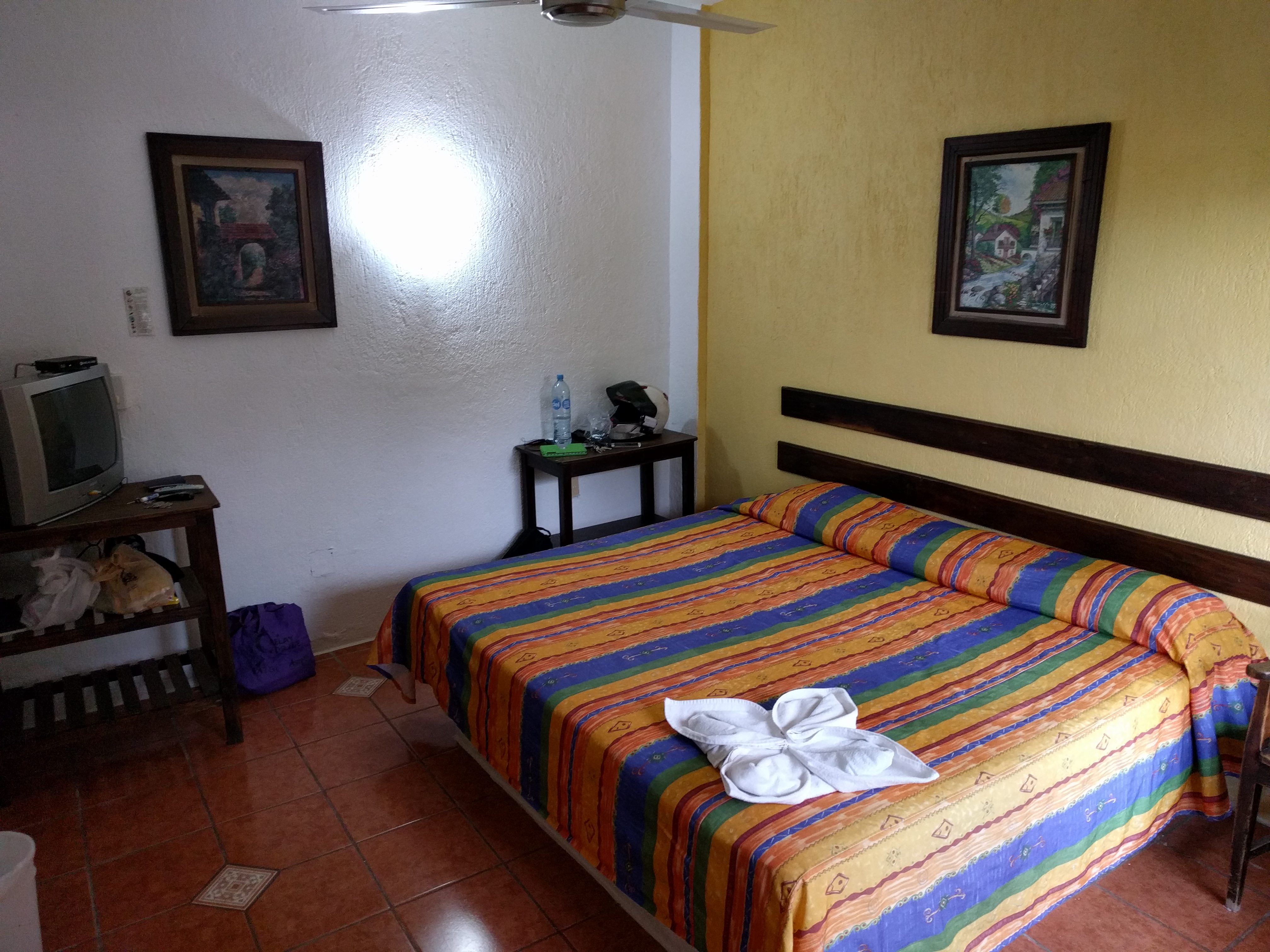 I don’t think I’ve ever slept in a bed that large before. It was very well landscaped. View out the window: 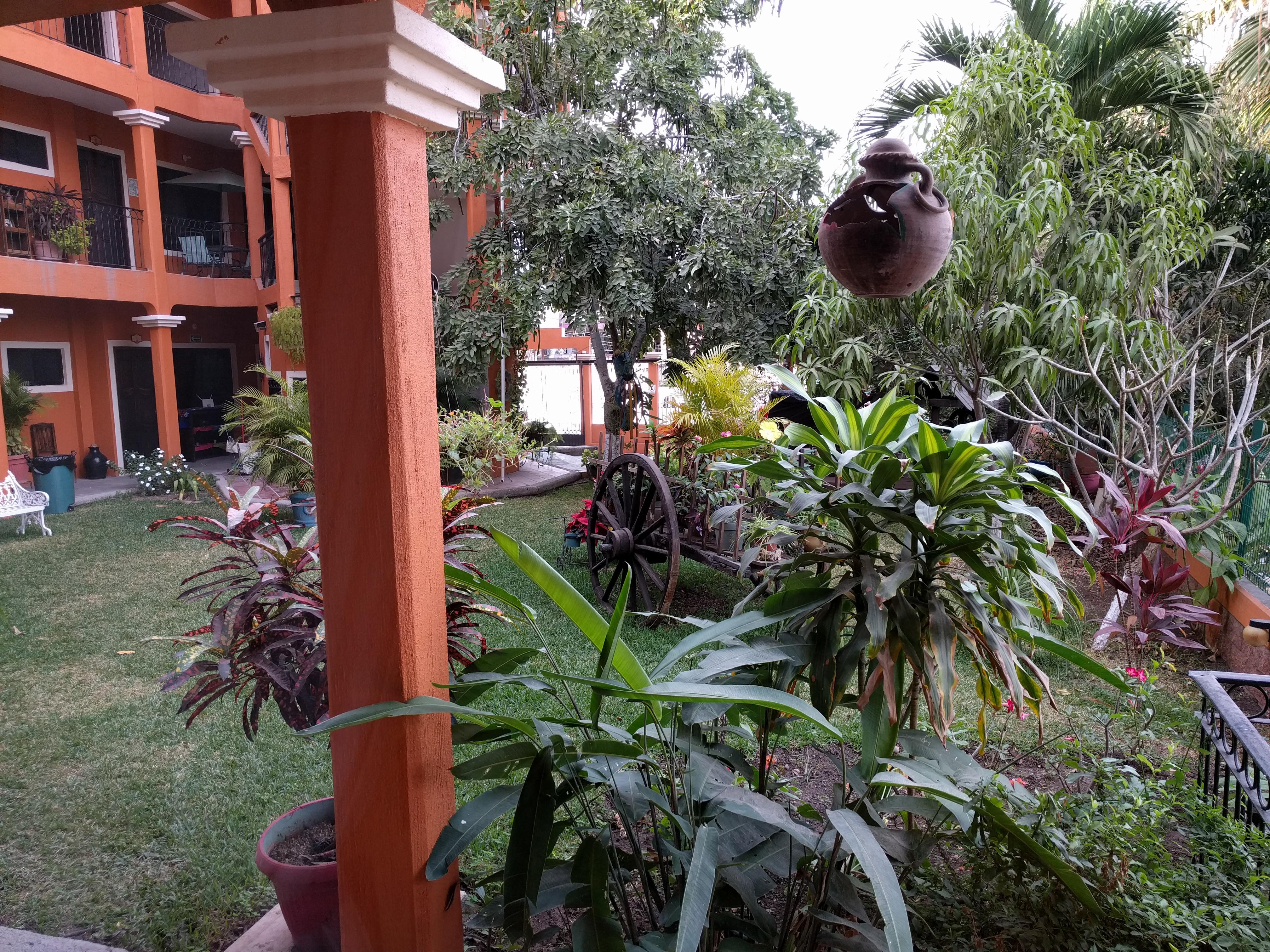 I walked to a grocery store called Bodega Aurrera. Here, I learned that it is actually possible to buy a motorcycle at the same place you buy your food. Ahhh….Mexico.

I turned in fairly early, but realized that the light switch was on the opposite side of the bed from me. I decided it was more expedient to get up and walk around the bed than to execute an arduous Army crawl all the way to the other side. Yes, I still have lots to learn.

Our lessons will continue in the next episode, when we visit the Sumidero Canyon and San Cristobal de las Casas. Thanks for reading!

Keep your motorcycle off of the sand, everybody.

Realtime update: Well…it had to happen sometime. My first real illness of the trip. I’ve been laid up in San Cristobal with some very unpleasant gastrointestinal issues. I think the worst of it has now passed, so I now just need to regain my strength. Ahhh…the joys of travel!

7 thoughts on “Beauty and the Beach”