Wait a second….Winter and Summer are reversed in the Southern Hemisphere? Why didn’t anyone tell me! In this episode, we continue to skirt alongside the Andes in Argentina and cross a lifetime milestone.

I could tell right away that it was cold when I woke up. The room in the shack in the field in the Argentina countryside was quite drafty. But when I got up to take a gander through the window, it was a surprise to see it: Snow.

My feelings were a mixture. I wasn’t real excited to get on the road in those conditions, but I had to appreciate the peaceful beauty of the falling flakes. 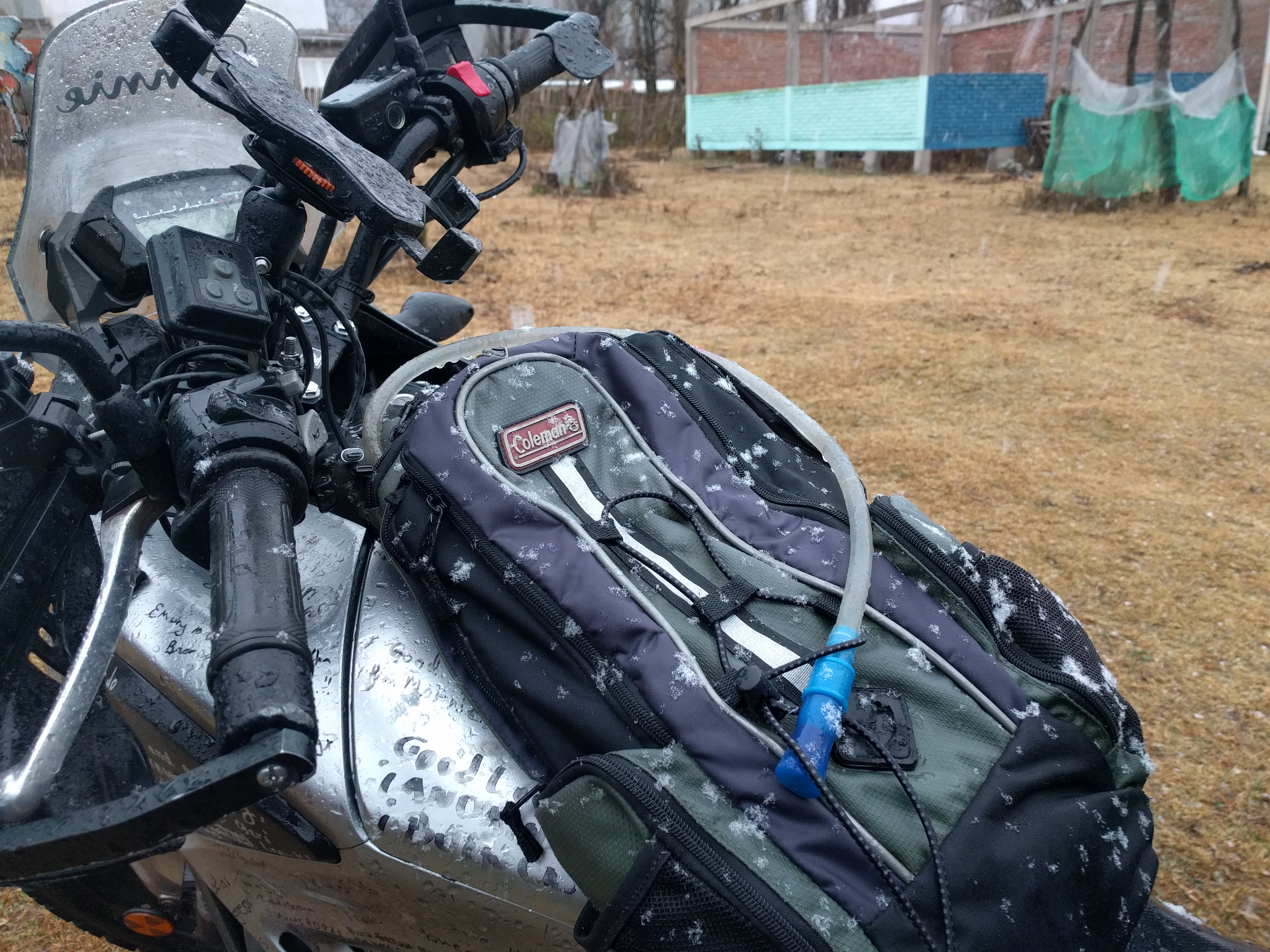 The last time I had seen falling snow was in June of last year as I made my up to Alaska:

By any measure, this has been a strange twelve months.

A quick glance at the forecast said that the low for this night was supposed to dip down to 23 F (-5 C). Waiting it out was not really an option. I ate some breakfast, got packed up and said goodbye to my host, Tina. I would still be going a bit south, but at least I would be going to lower elevations. I passed through El Mollar and by the big lake again. 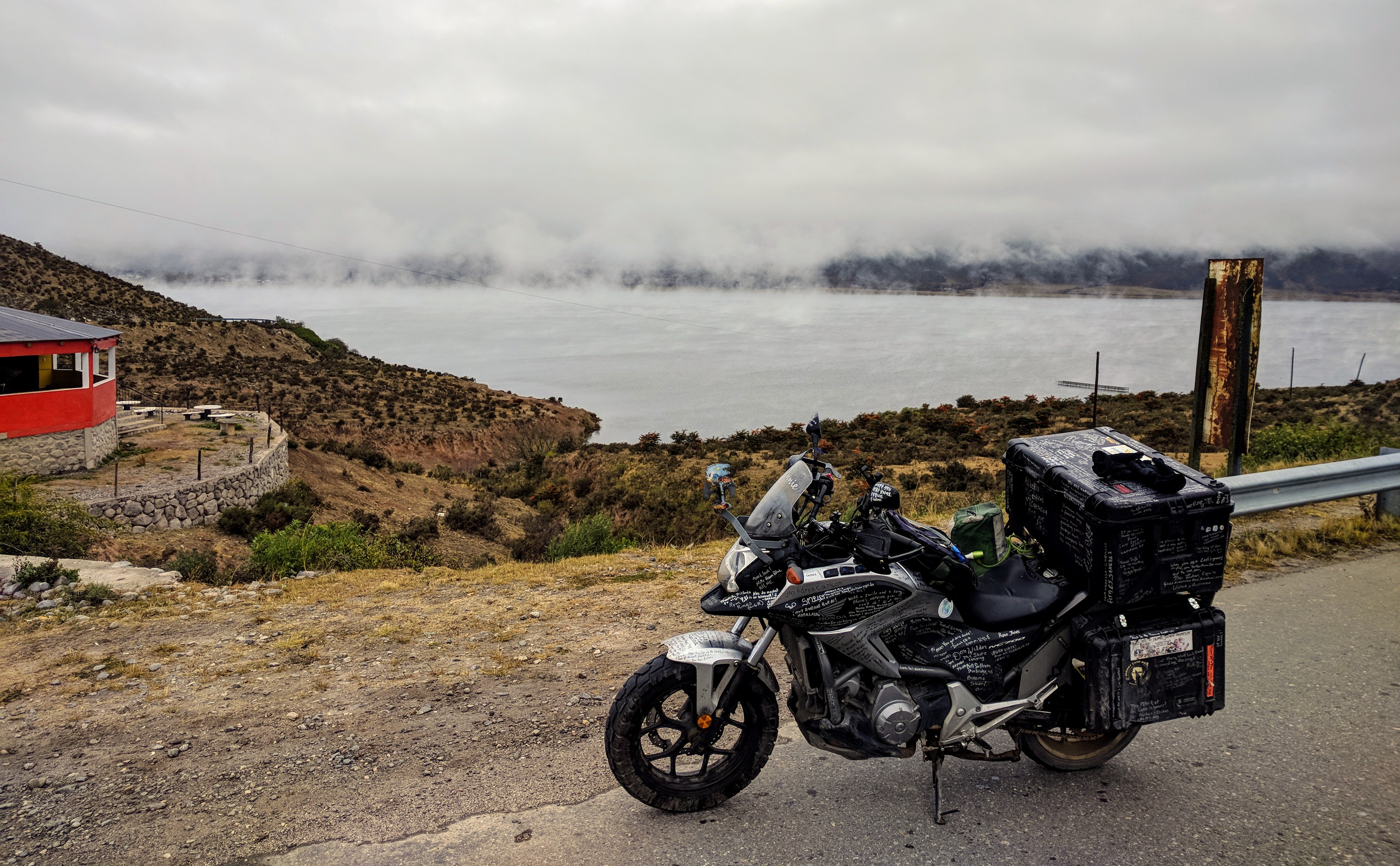 I was aiming for the city of Cordoba, but I decided to take a more scenic route since it was going to take two days whichever way I went.

The snow switched to freezing rain fairly early. I’m not sure that was much better. 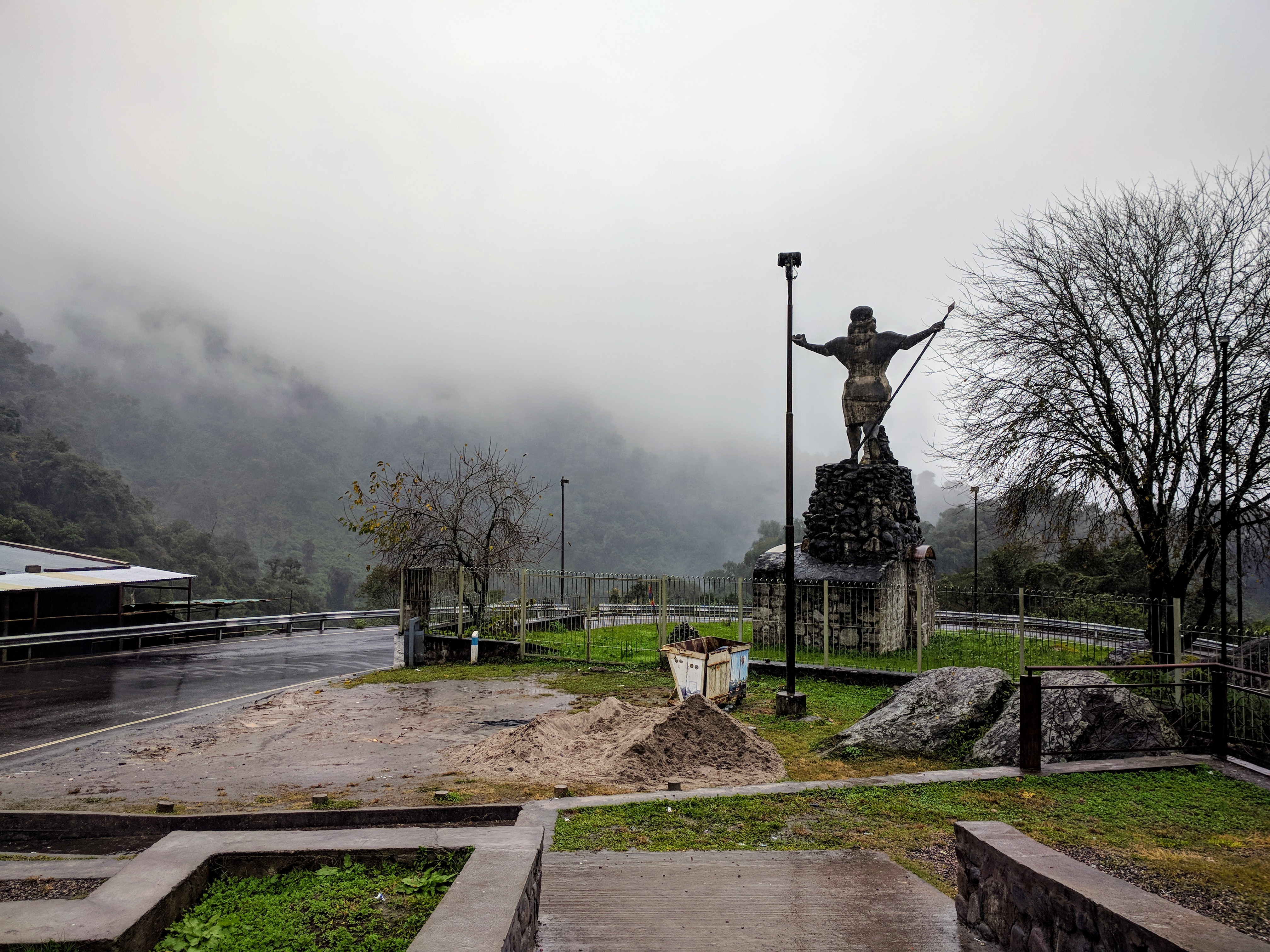 The road was really scenic and could have been a lot of fun if I wasn’t worried about slipping.

Thankfully, the conditions continued to improve as I lost altitude.

I reached my goal for the evening, the city of La Rioja. I eventually settled on a hostel called Wayra Hostel. It was $9/night. The gal at the desk invited me to bring Annie inside, but the doorway was just too narrow. She assured me that it would be fine to park on the sidewalk, as they had staff there 24 hours. It seemed safe enough. 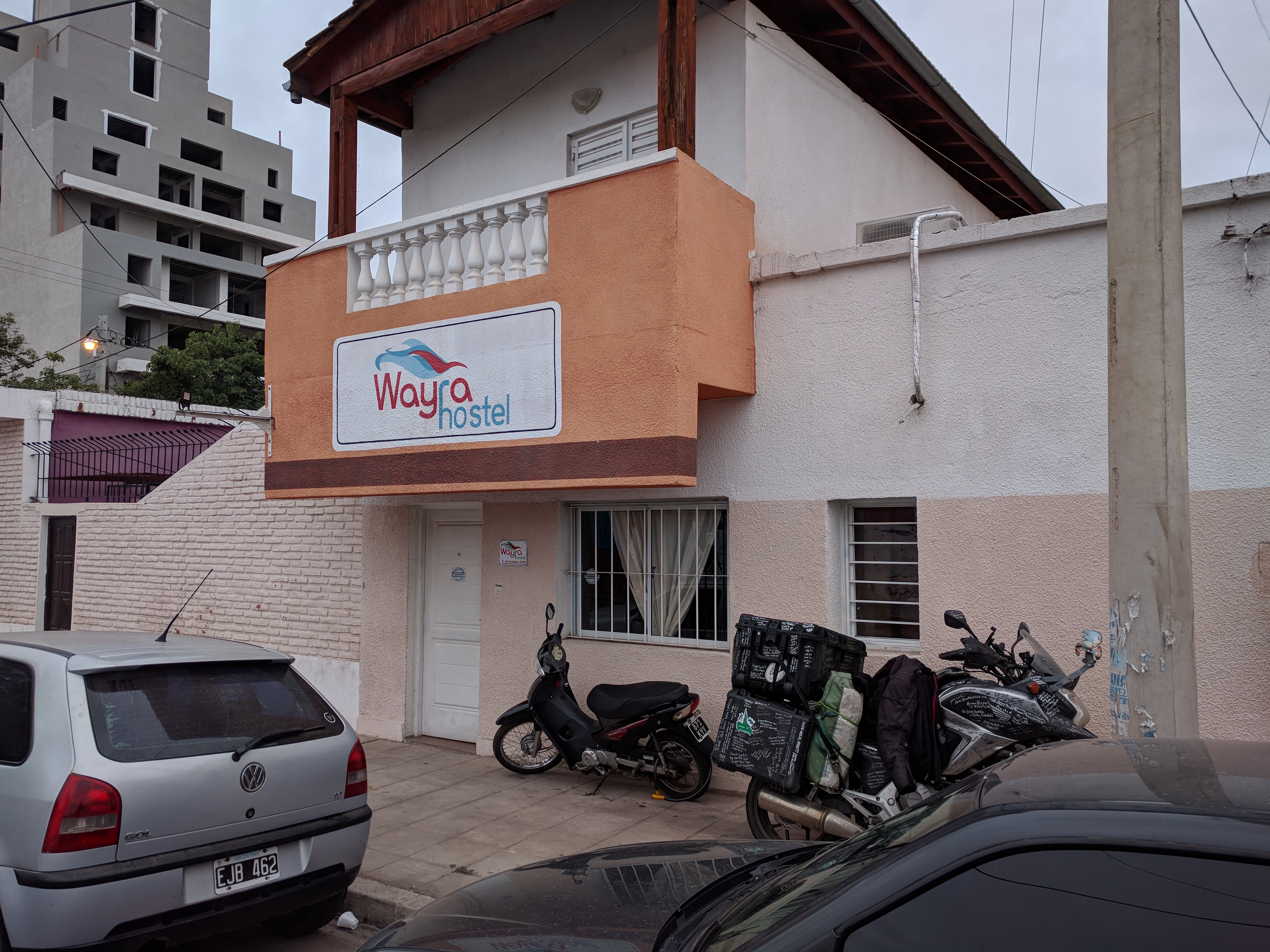 I took a stroll to the center to see the sights.

Probably the most interesting thing was an animitronic display of Pope Francis (He’s from Argentina). At the top of every hour, he rolls out from behind the curtain and delivers the speech that he gave at his election. 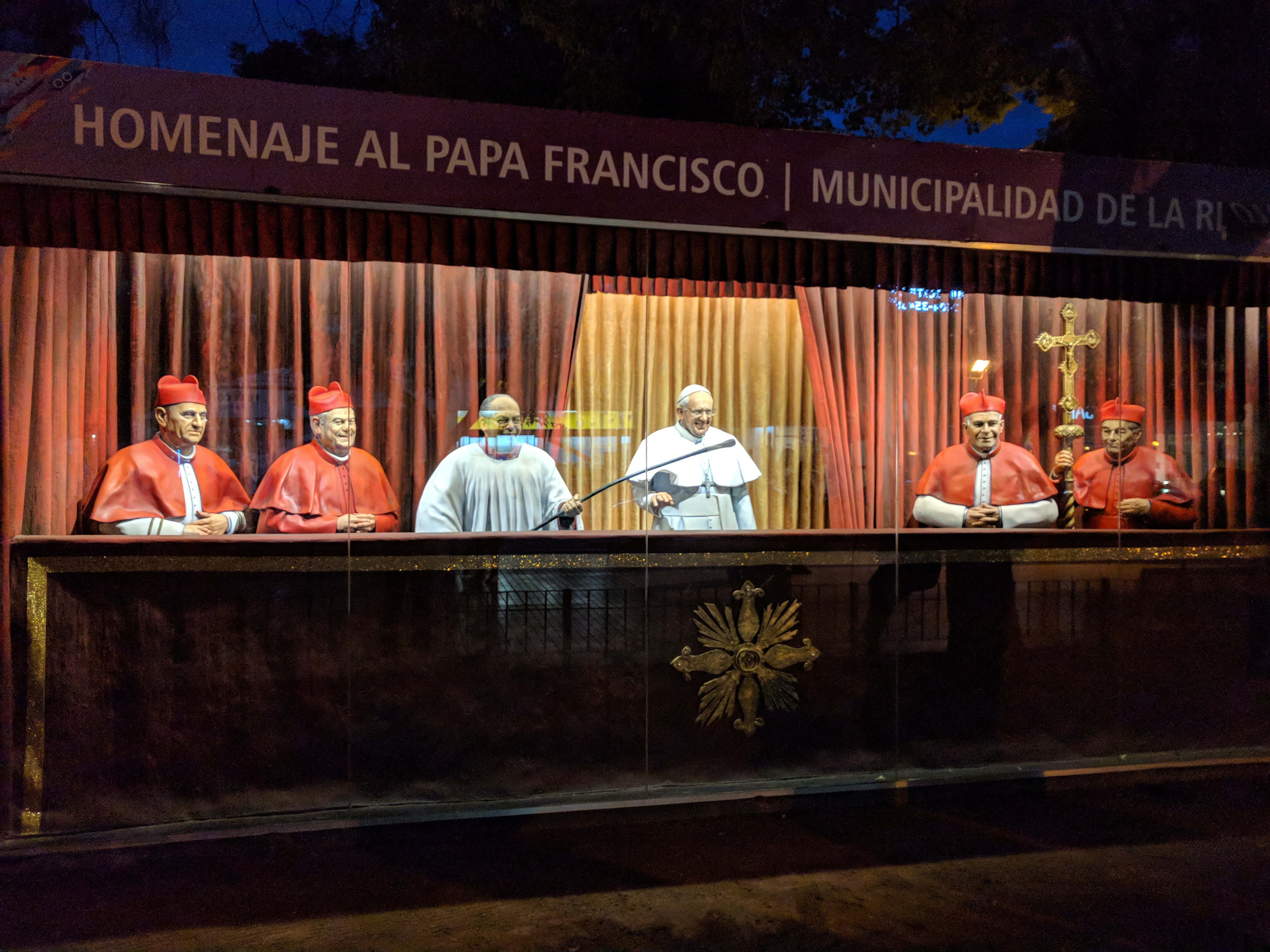 His head nods and he can move his hand. I don’t know why I found this so interesting.

I also began developing an addiction to “pralines,” little bags of candied peanuts that you can buy for about $1. I returned to this guys stand a couple of times. The only time he didn’t smile at me is when I asked to take his picture. 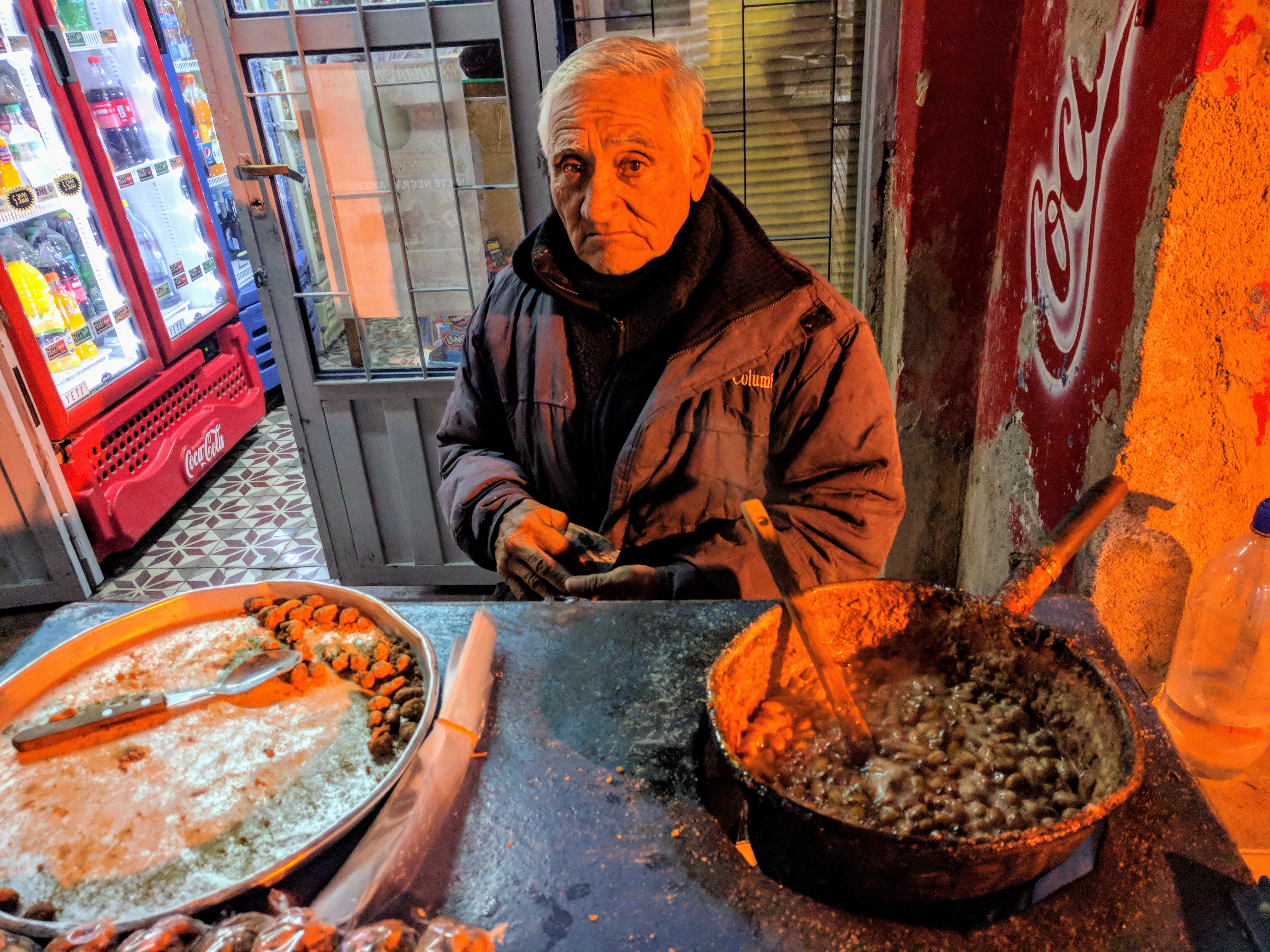 If anybody wants to learn Spanish, possibly the best thing to do is to never pass up a street vendor selling a food you haven’t tried. I rarely understand completely what I am told by these people, but they are usually fun conversations.

Tired from the chilling ride, I turned in early.

The layout of hostels is always interesting. Very few, if any, were built with the intention of housing a large number of people. Accordingly, they are usually an eclectic collection of ad-hoc solutions. This morning, I experienced the security of using a shower that had an emergency exit: 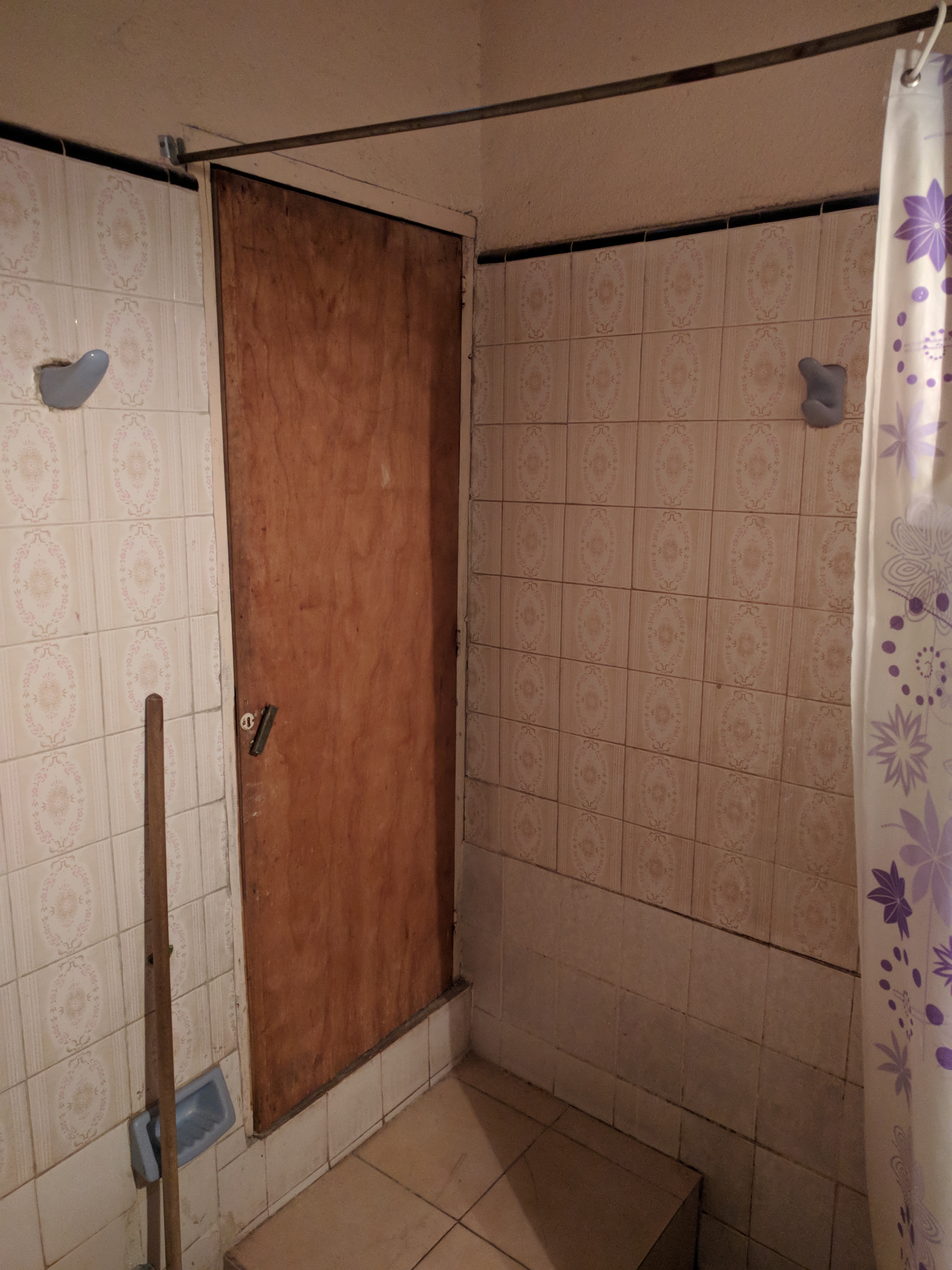 I was on the road at a decent hour.

Alright, you guys know how much I like milestones, right? Just minutes after leaving La Rioja, I crossed over a very important imaginary line.

On July 17, 2011, My parents, sister and I drove our rental Peugeot into Rome, Italy. This was the southernmost stop on our two month assault of the continent of Europe. Additionally, it would mark the furthest I had ever been from home, a distance of 5,219 miles. When you a draw a line at that distance on a map, it looks like this: 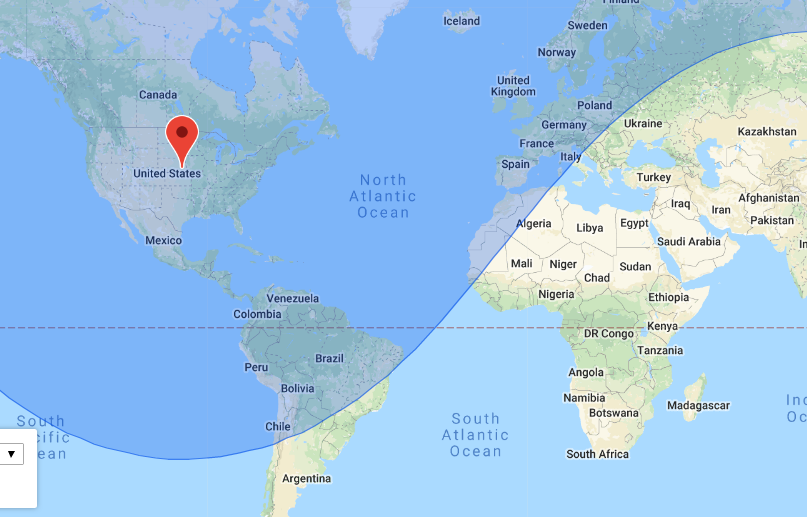 Today I would be eclipsing that distance, venturing the furthest that I ever had from home. It’s crazy to think that the majority of Europe is closer to home than I currently am. 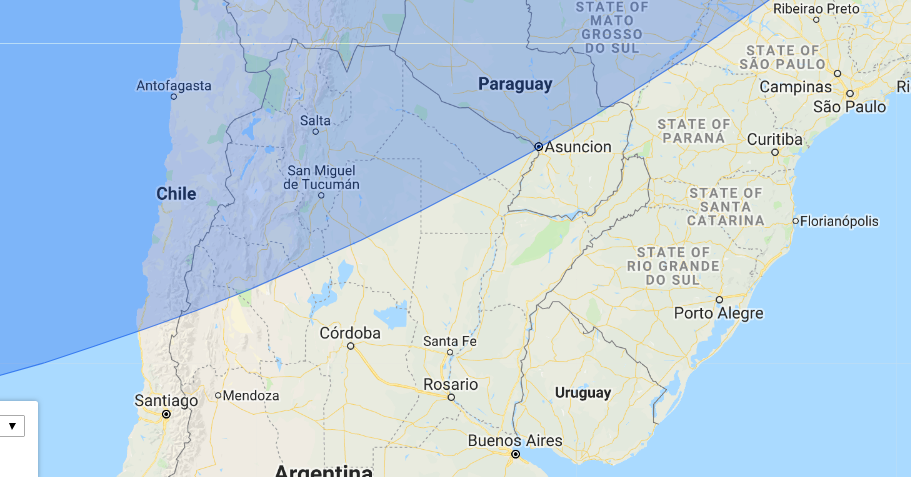 I had to be reminded of the following scene from Lord of the Rings.

Though in all honesty, Samwise probably needed to get out a bit more.

I would take aim at Cordoba for the day, but end up falling just short.

Can we talk about Argentina?

This might be a strange time to do this, but I kind of wanted to “zoom out” and provide some perspective of this country since I’m spending so much time here. 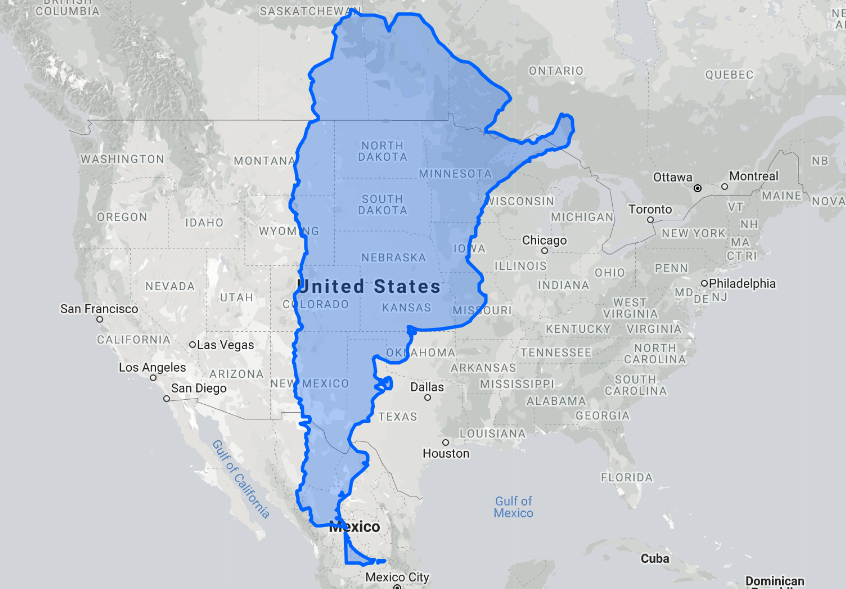 Additionally, it covers so much latitude and has such a range of elevations that the variety of landscapes is just astounding.

Argentina isn’t traditionally a cheap place to visit for tourists, but I am here at an absolutely wonderful time. Strength in the dollar coupled with weakness in the Argentine Peso means that my money goes really far. Nowadays, I can buy about 25 pesos with $1. Three years ago, $1 would only buy about 8 pesos. 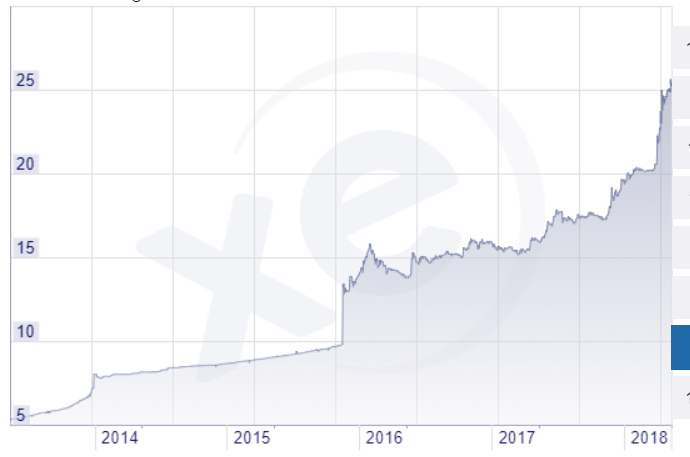 If you’re an American who has ever wanted to travel internationally, now is the time!

Though they are a fairly advanced society, the modern technology of coins (invented about 2,700 years ago) has not really been adopted. They use battered bills, some comprised mostly of tape all the way down to 2 pesos (about 10 cents US). 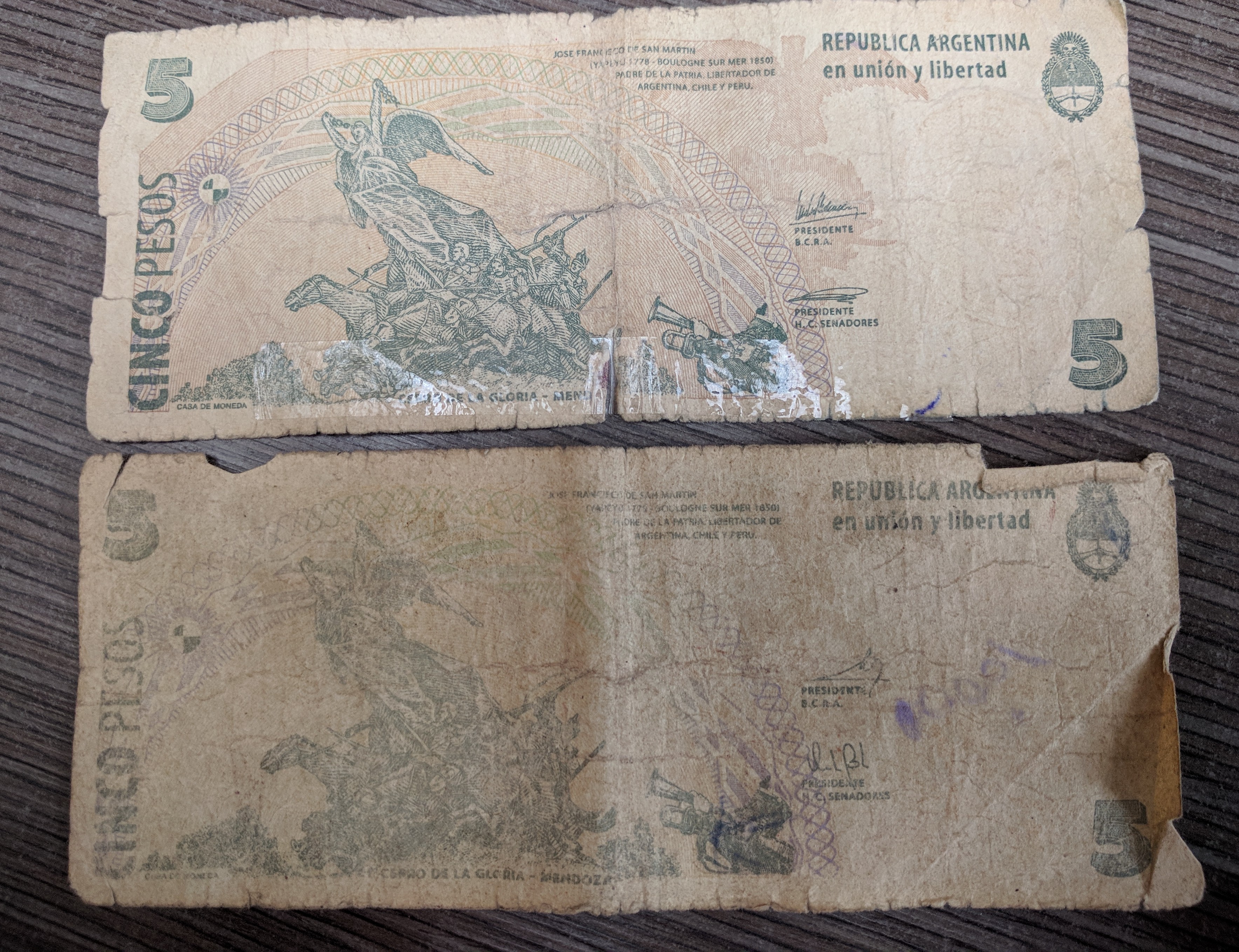 Probably the most significant difference of Argentine Spanish is their pronunciation of double “l” and “y sounds. In most countries, these are similar to an English “y.” Here in Argentina, it is said like the “s” in the word measure.

For example: When I roll up to a gas station and ask them to fill my tank I use the word “lleno” which means full. If I say “yay-no” like I do in most countries, they just stare at me. They wait until I say “zhay-no” before continuing.

They have coffee here, of course, but that’s not the warm beverage of choice. Yerba mate takes that title. 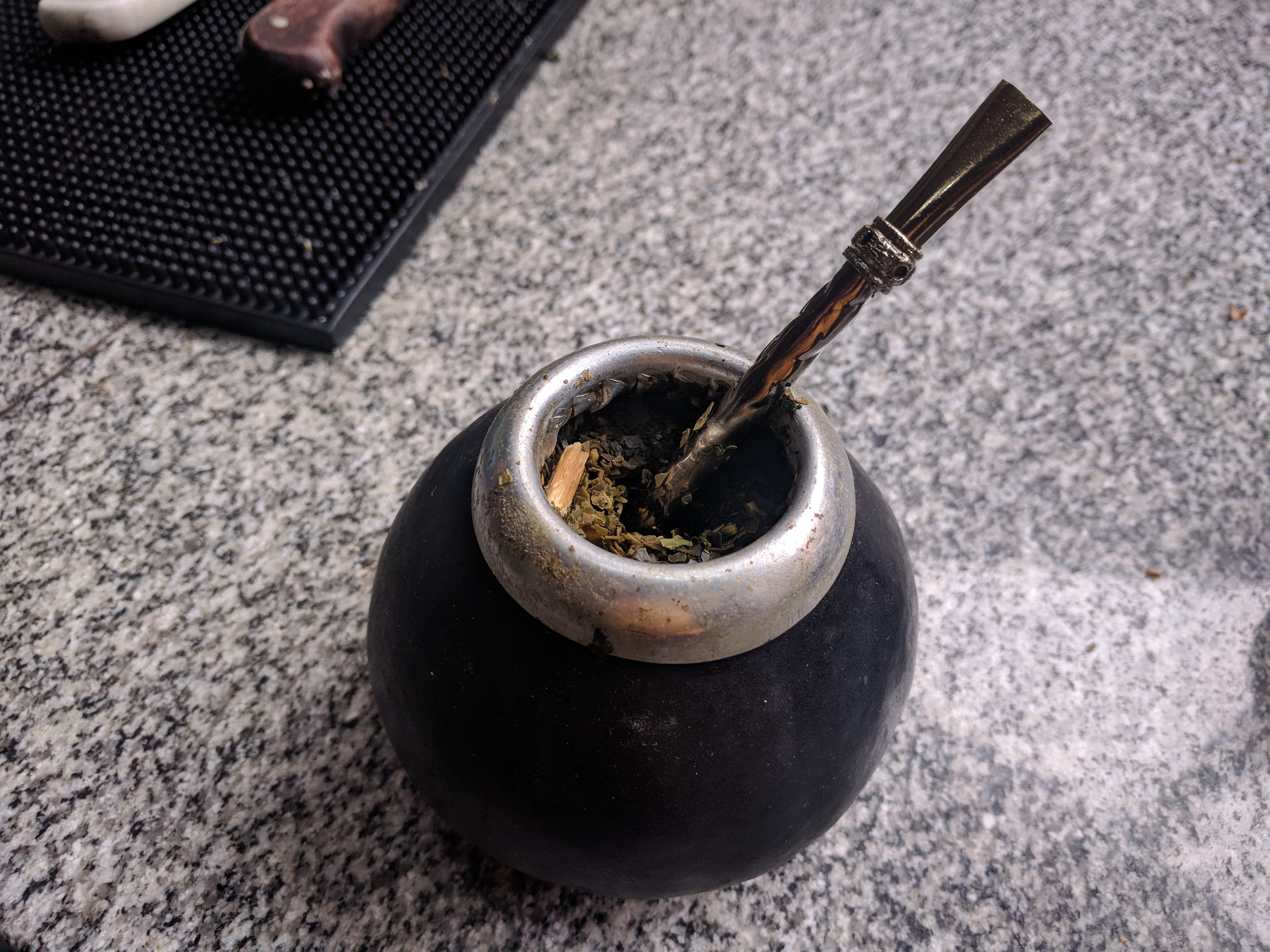 What is it? Let me see if I can explain: Say you got done mowing your lawn and you dumped the grass clippings out onto the ground. Then you let them sit in the sun for a few months until they were dry. Then you put them in a cup, poured boiling water onto it, then sipped it through a filtered straw. That’s mate. (Maybe I need to try it some more…) 🙂

Even at gas stations, there are dispensers were you put in about 20 cents to receive hot water for your mate. 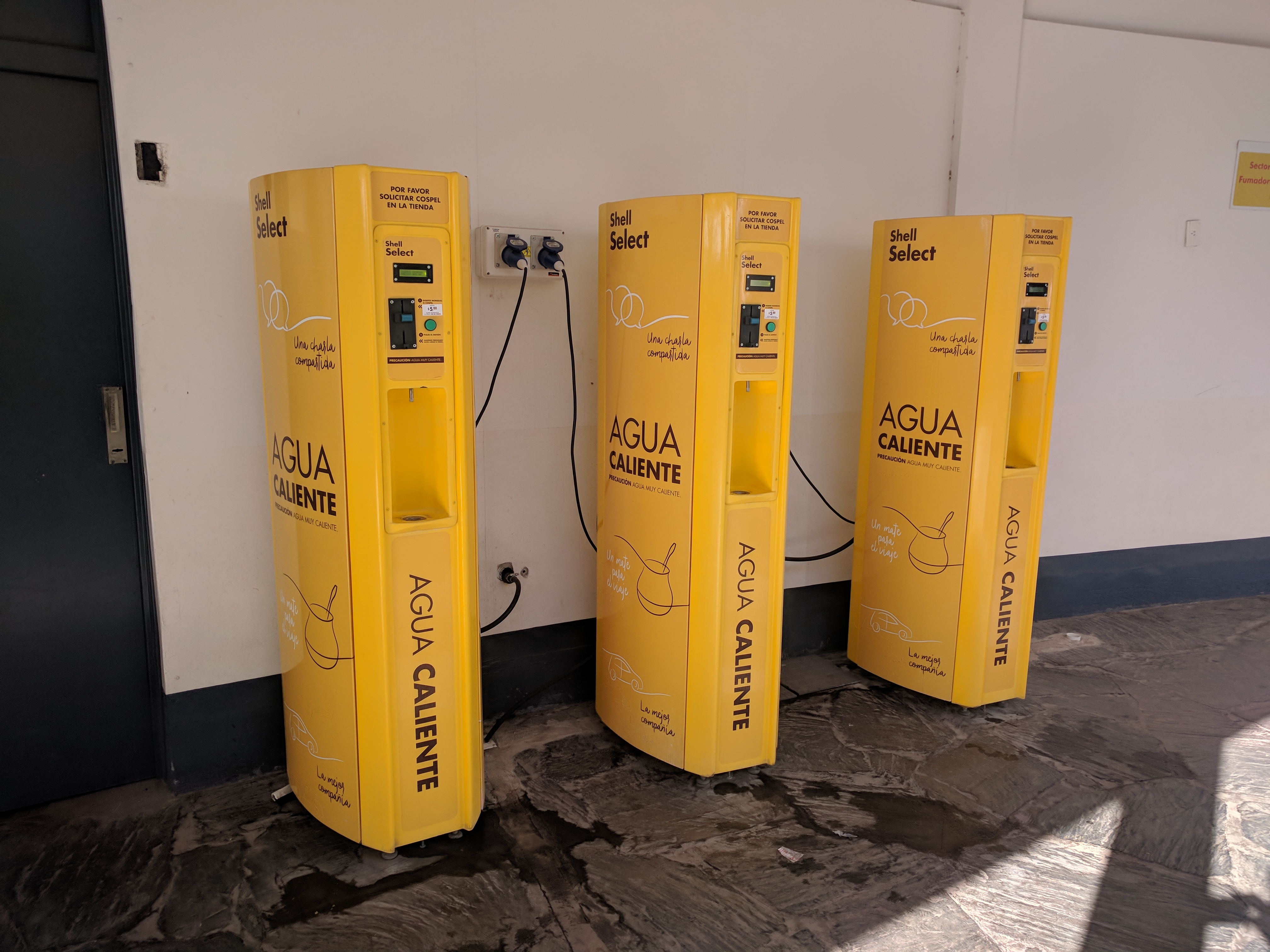 Catholicism is big, of course, but football is the true religion. Argentina were the World Cup runner-ups in 2014. As I type this, it is less than a week until Argentina’s first game in this World Cup. National team fever is at an all time high.

Argentine, Lionel Messi, is possibly the most well-known athlete in the world. I wish I had taken a picture of each advertisement featuring him while I’ve been here. He’s so famous, even half of his face suffices. 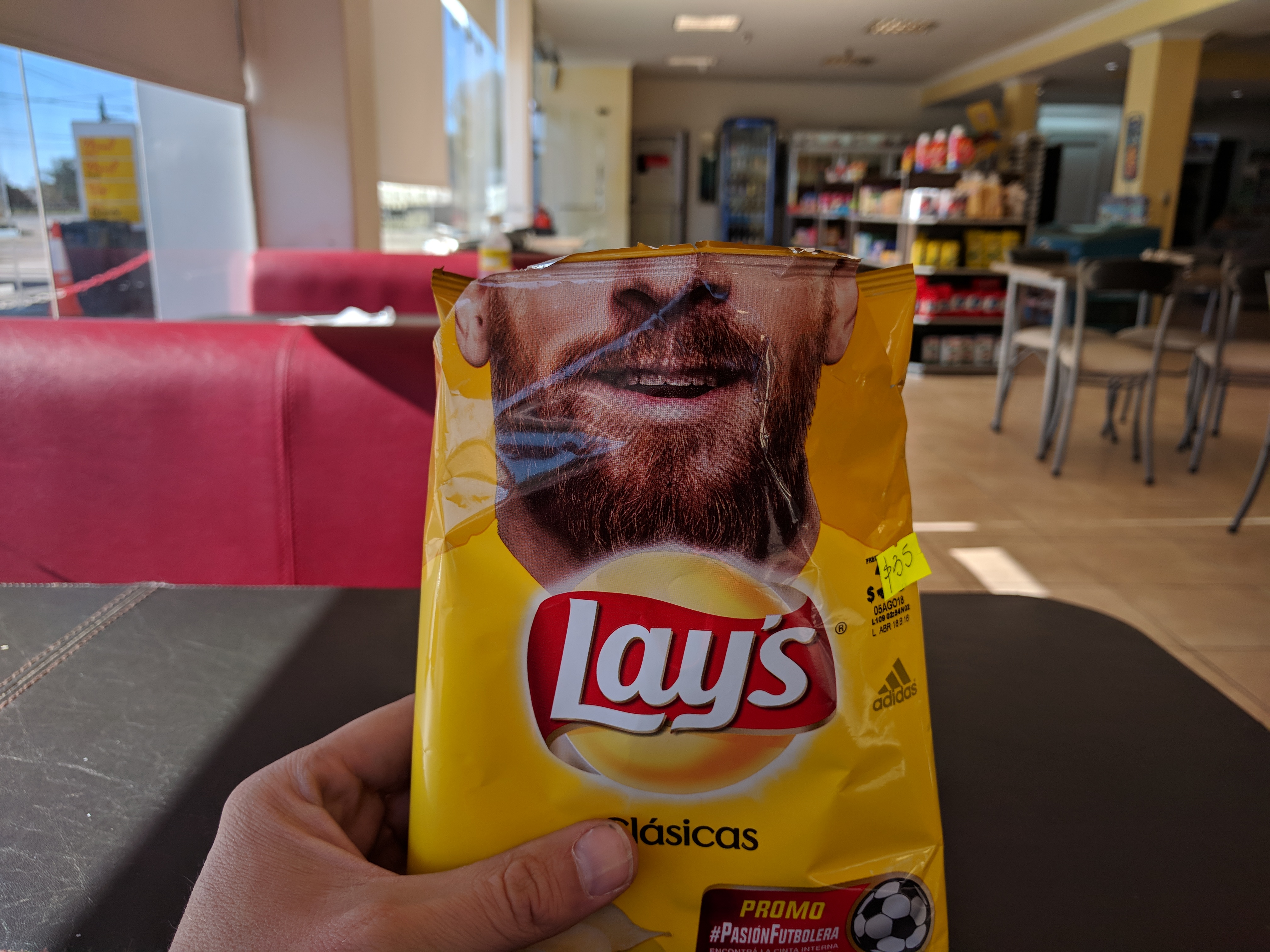 I saw some nice things, but the temperature made it hard for me to enjoy myself. It hovered right around 40 degrees F (4 C) pretty much the whole day. Along my route, I’d just happened to see that there was a motorcycle museum near the town of La Cumbre. Since it is the “off season” in terms of tourism, it is only open on the weekends. My good fortune continues!

The entrance fee was just about $4 and I soon met the owner Lisandro, who was excited to show me around and hear about my trip. 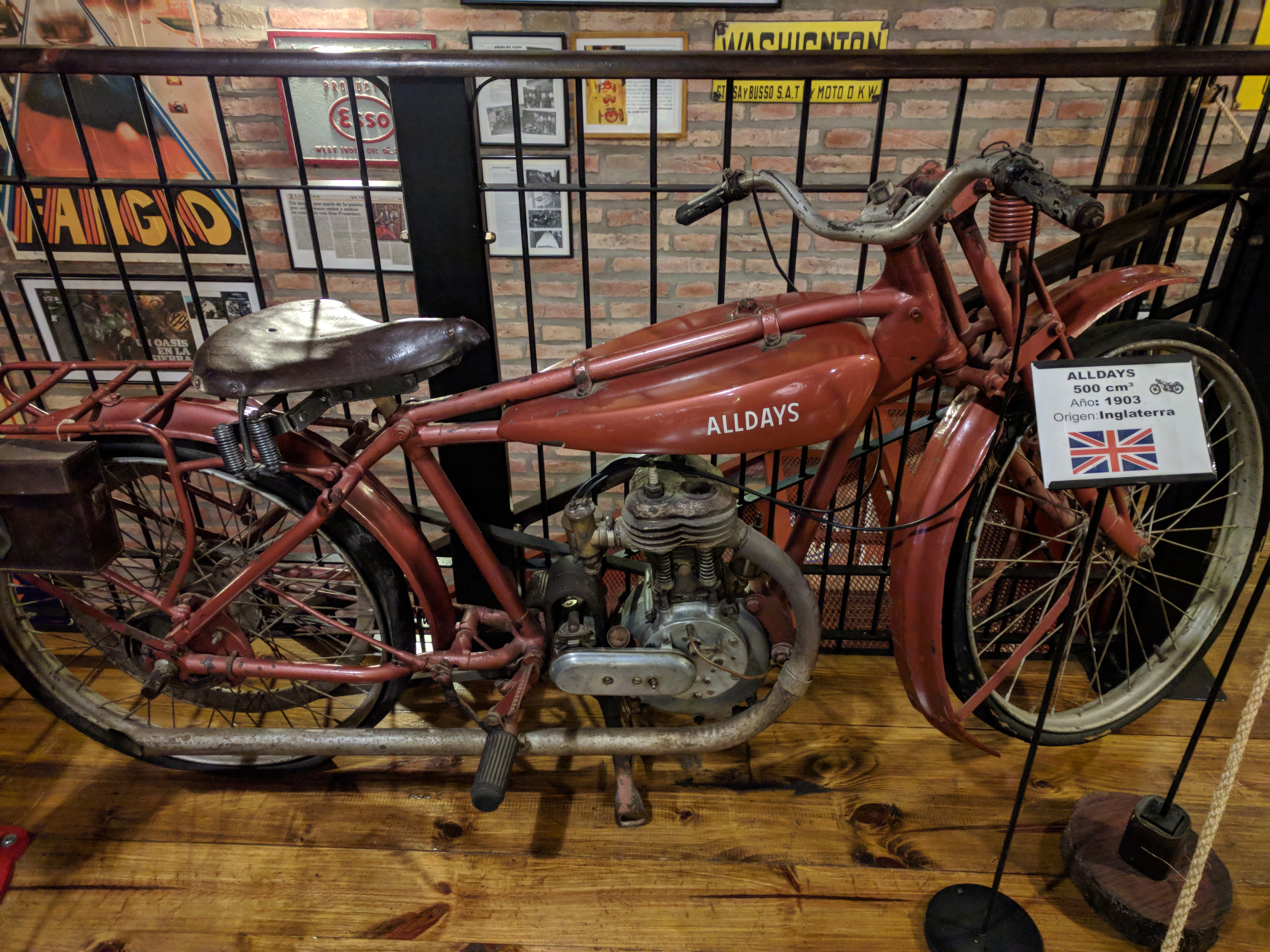 They had some foldable, parachute-dropped scooters (English military, I believe): 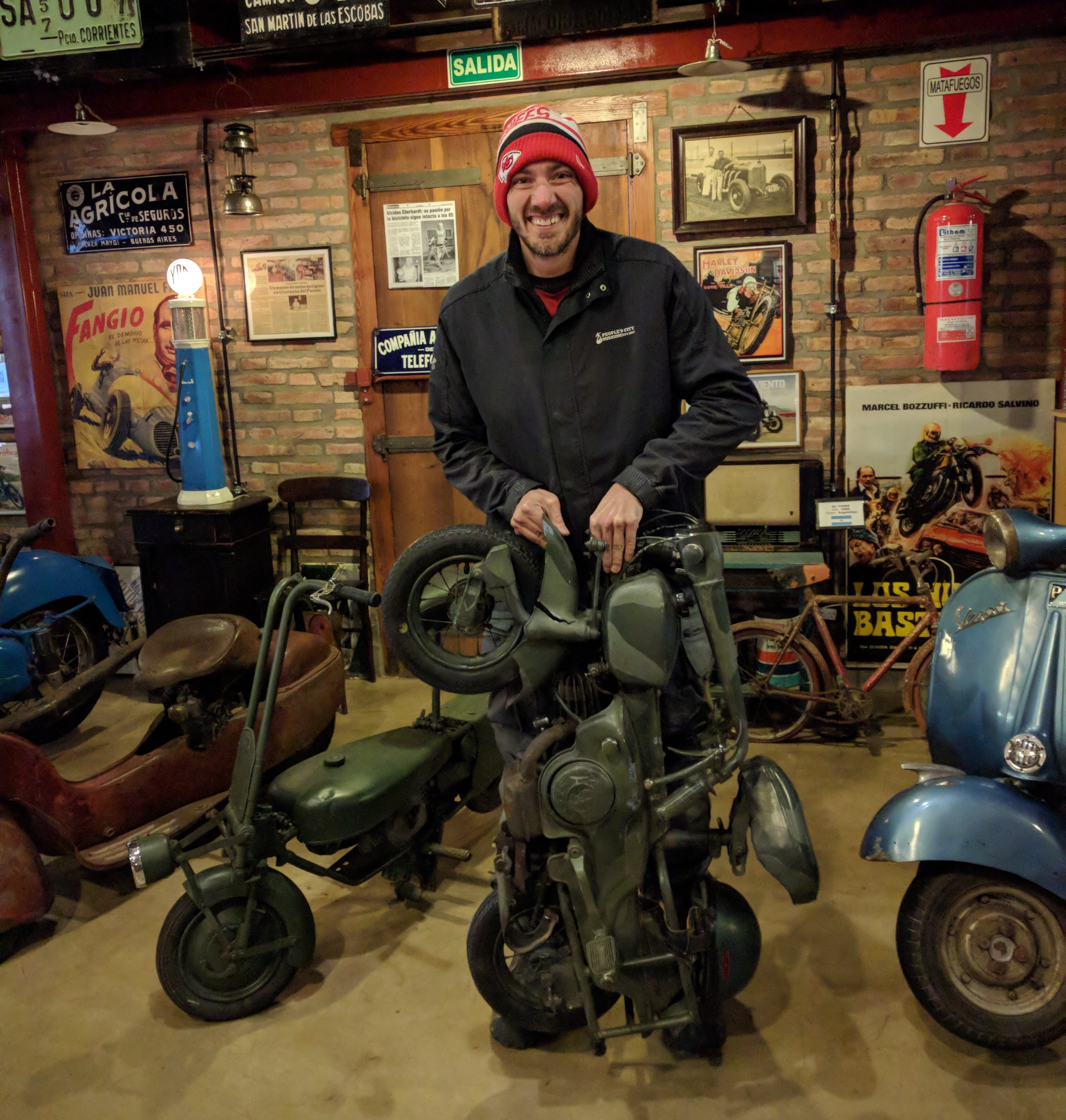 The American version, Cushmans, were made in Nebraska. 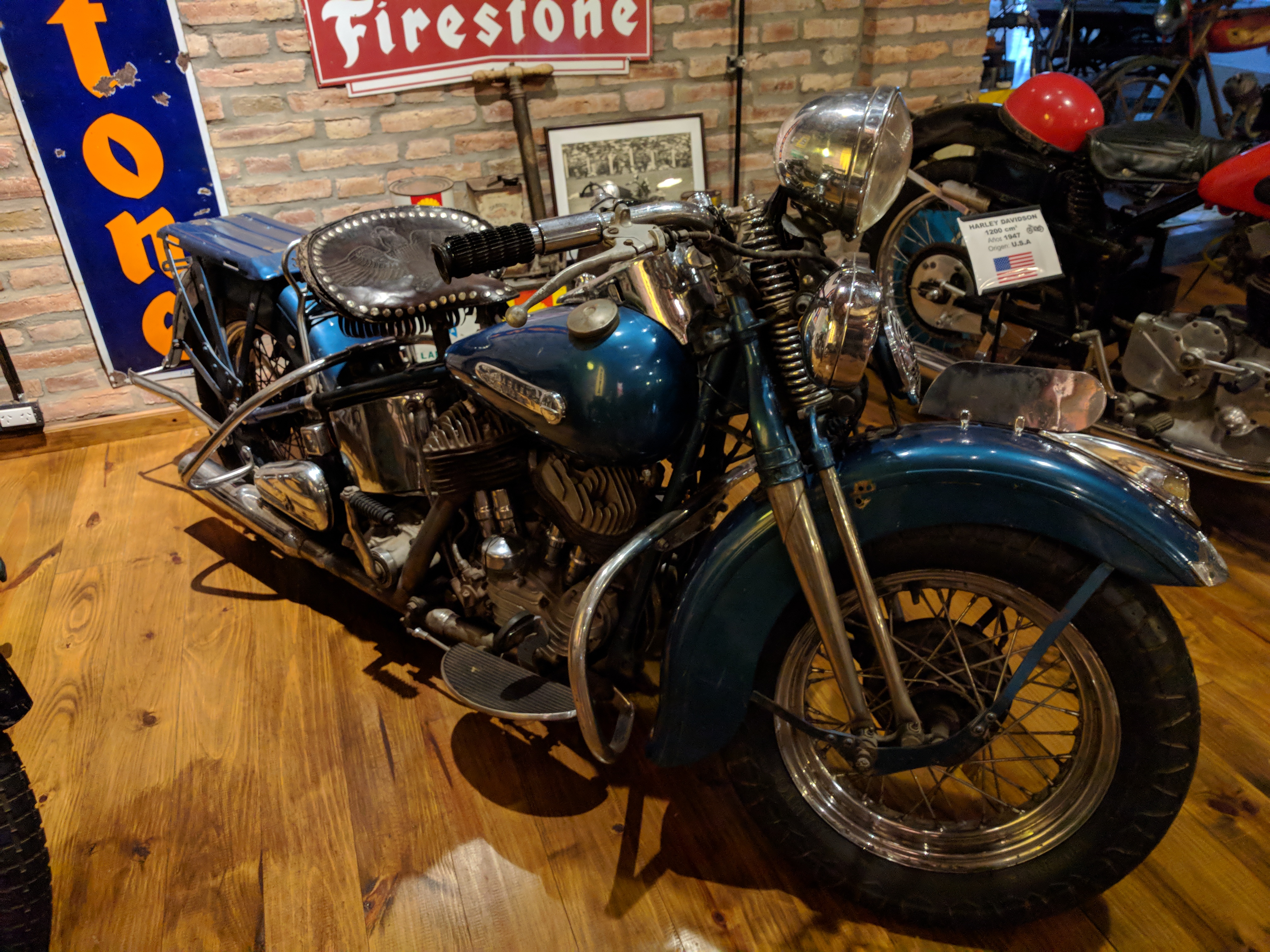 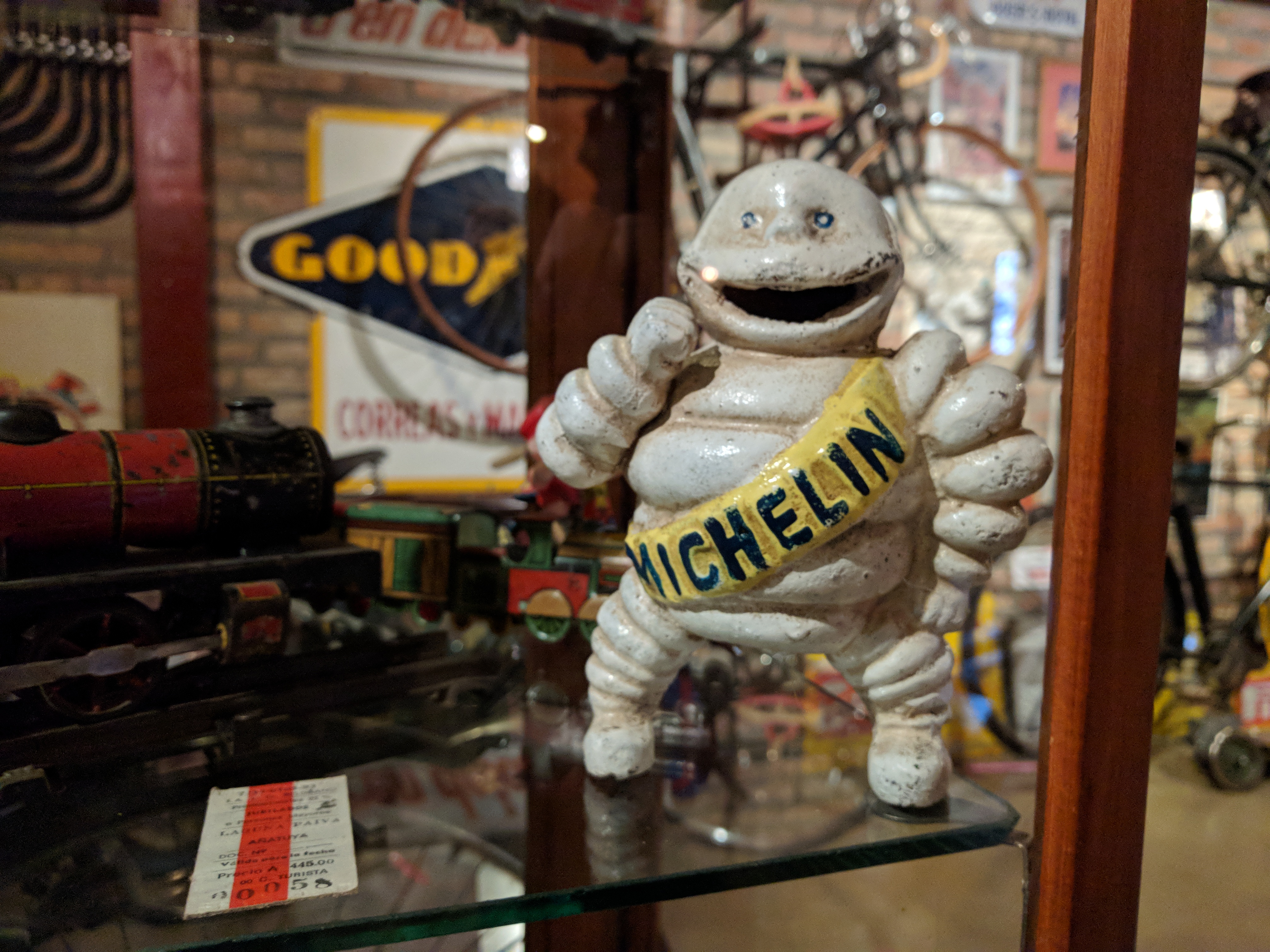 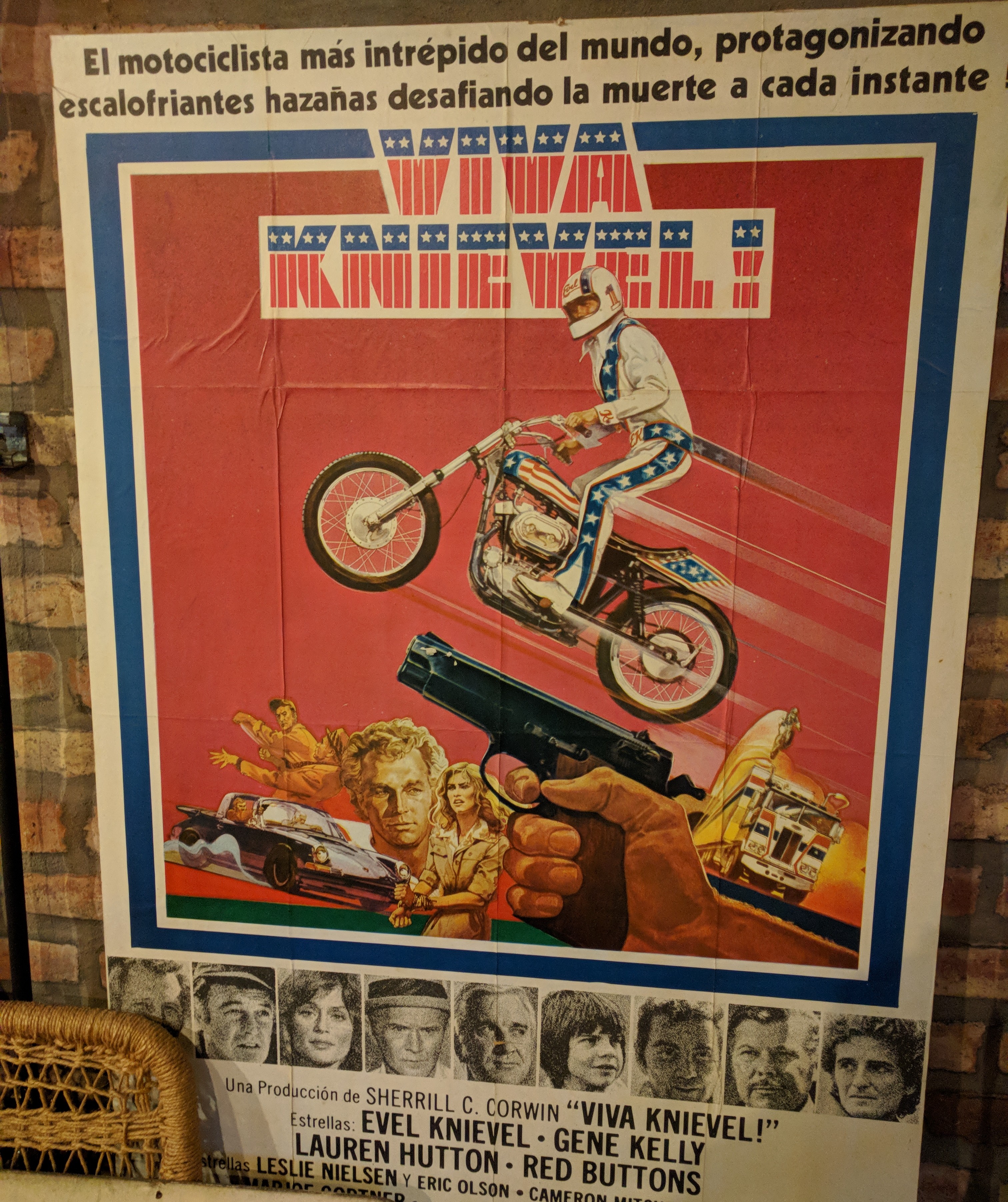 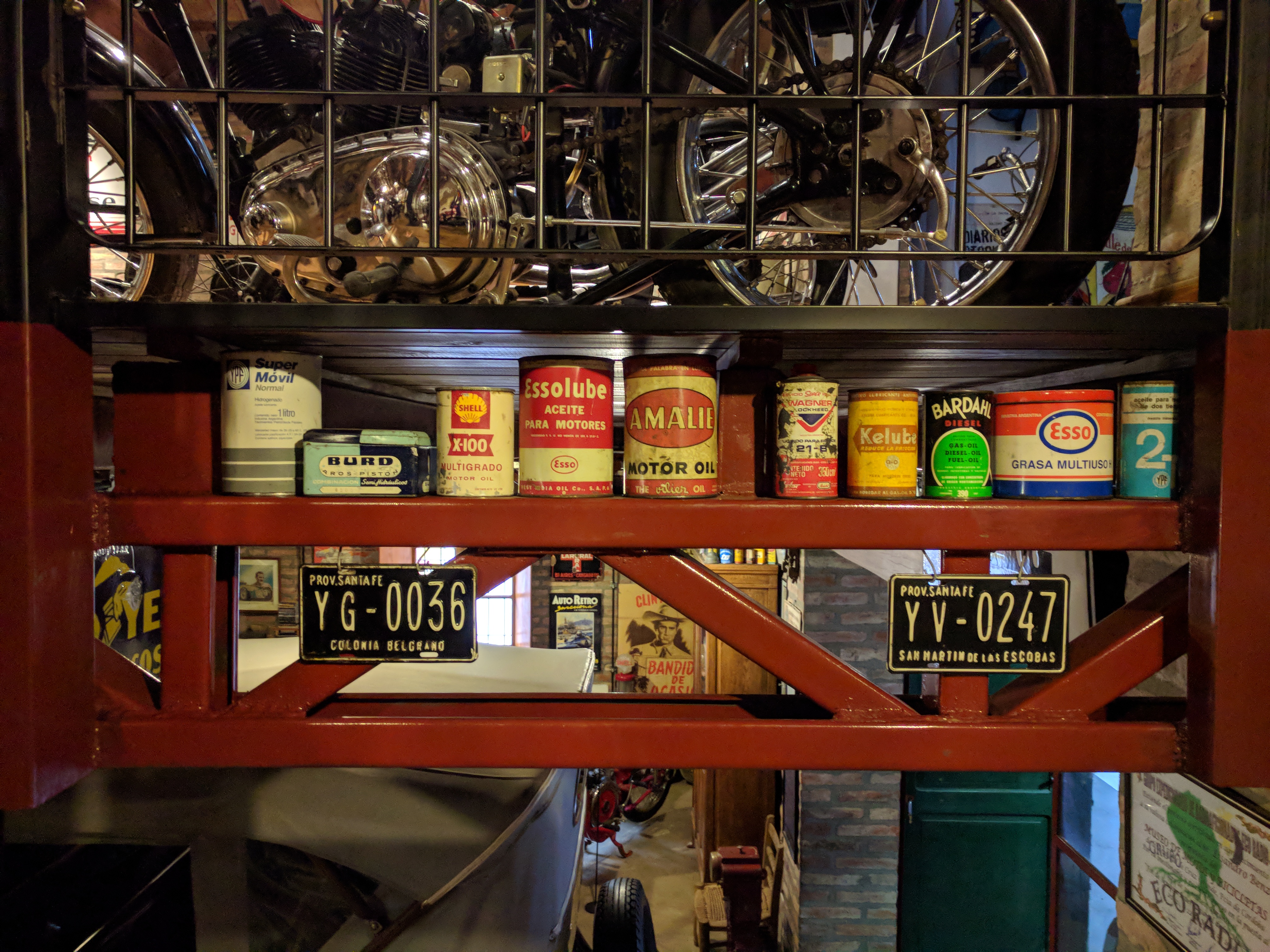 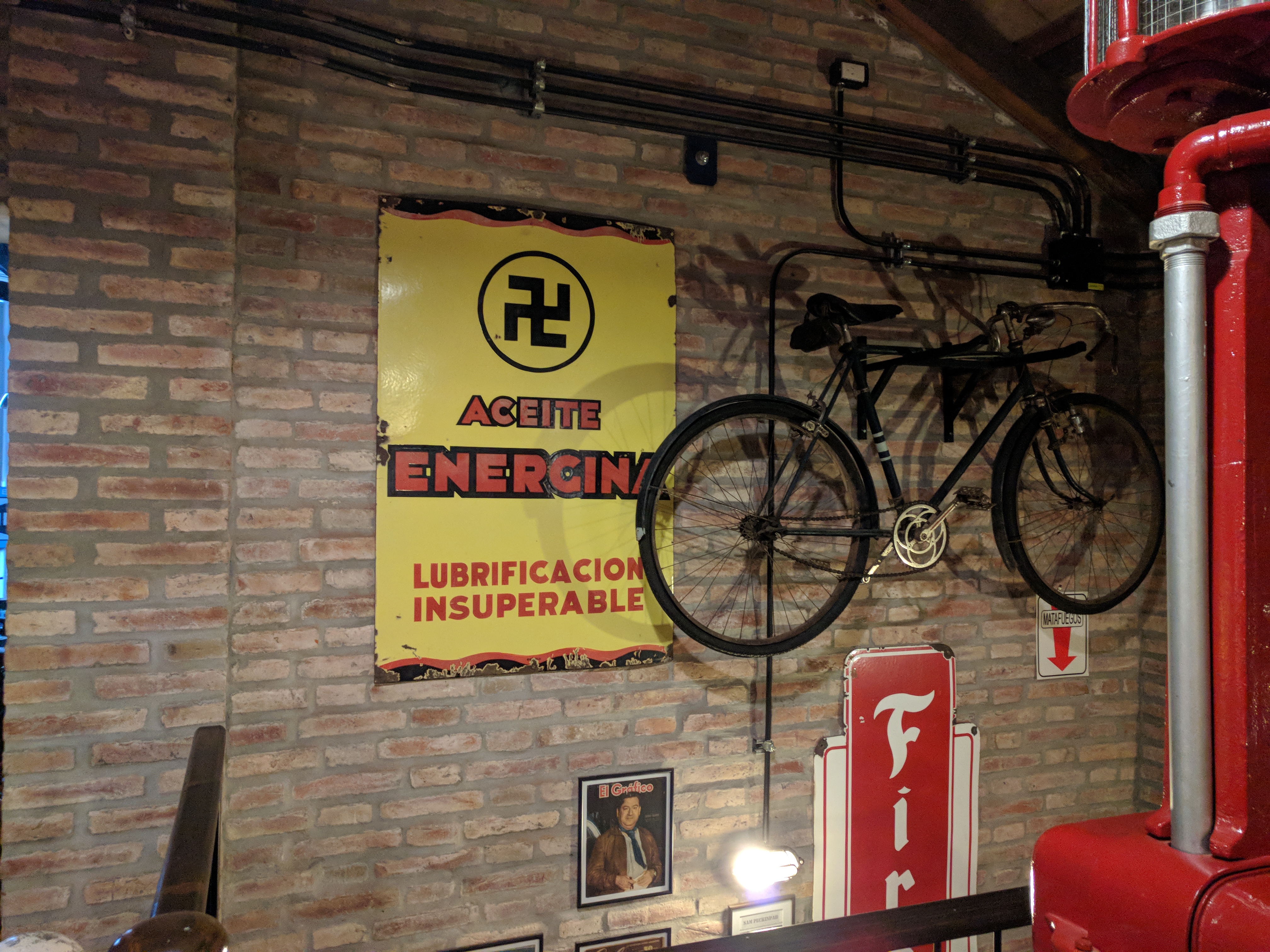 Lisandro even shared some mate with me: 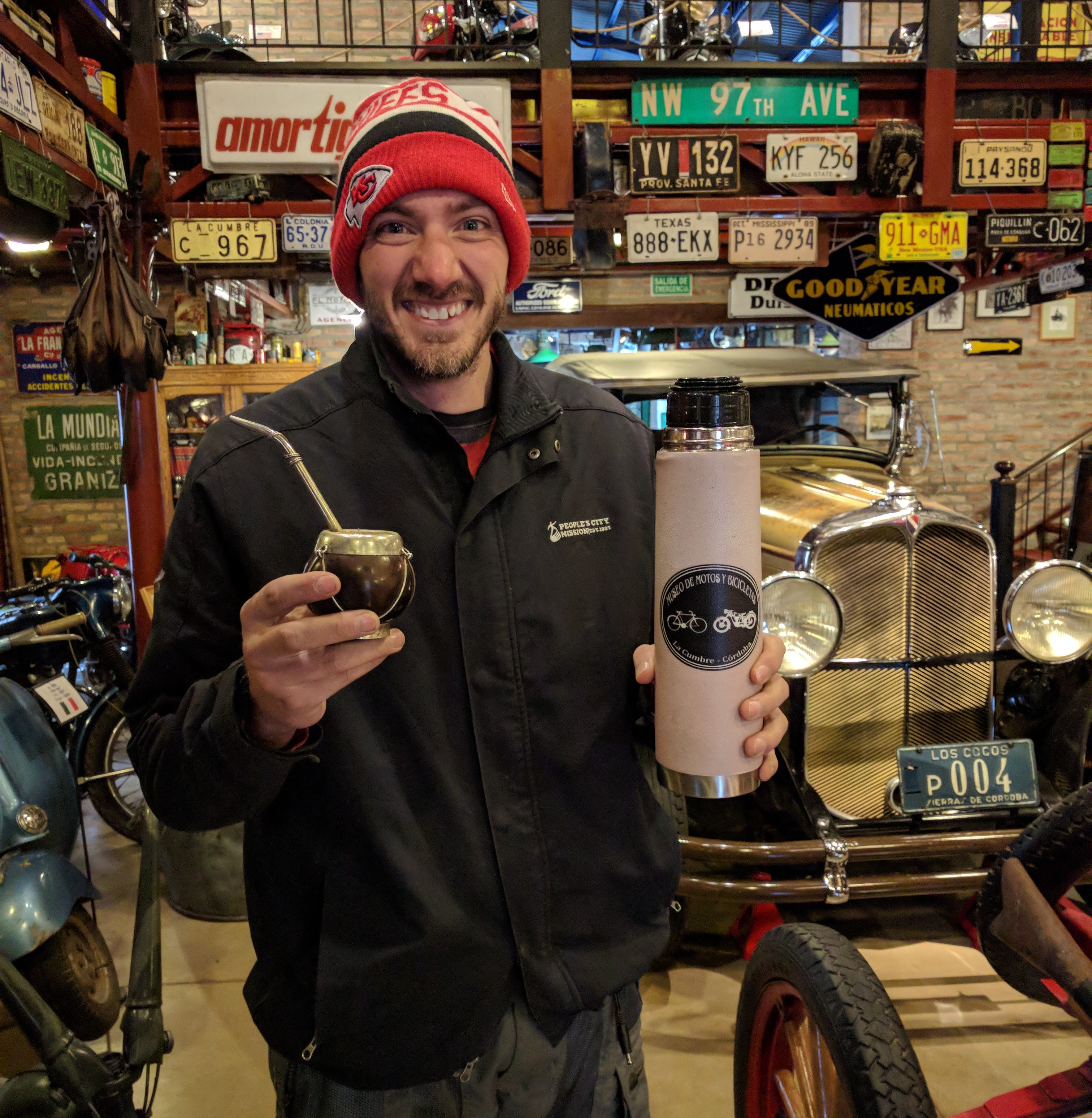 I had a great time there, of course staying longer than I should have. 🙂 If you’re passing through Argentina, make sure to stop in and tell Lisandro hi from me! He was lacking a Nebraska license plate in his collection. I’ll have to see how much that shipping costs when I get home… 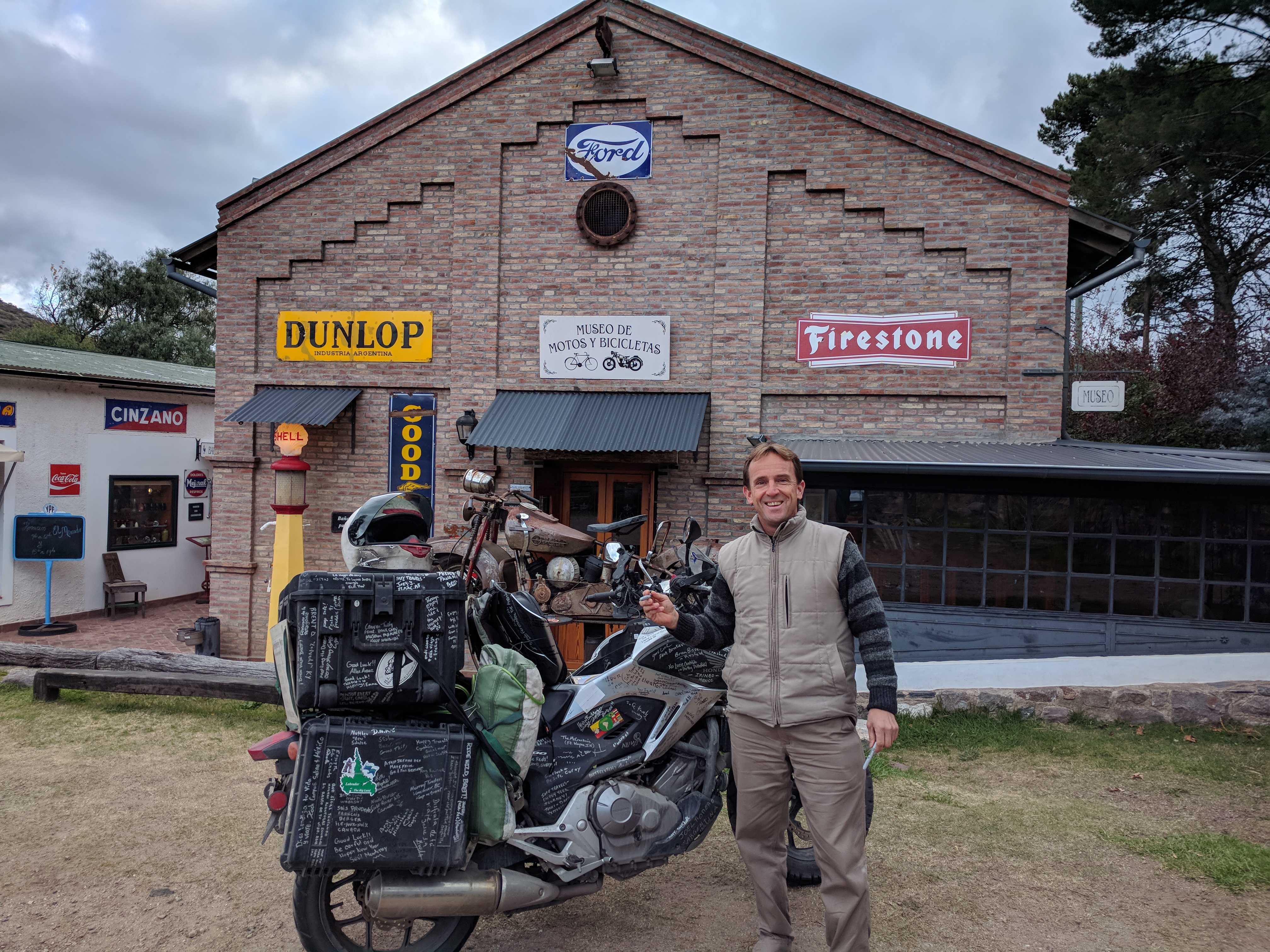 I’d used up too much daylight to reach Cordoba, so I headed towards the touristy town of Villa Carlos Paz instead. There were plenty of lodging options there, so I wasn’t too worried. I sped there in the last gleams of daylight.

I went by four hostels, all of which were closed, either permanently or for the season. I eventually decided to spend a bit more and book a hotel, but when I got there it was closed too. I spent way too much time wandering around this town.

I eventually decided that I was going to have to camp, even though it was going to be a really cold night. I bought some food and studied the satellite map while I was in the checkout line. There was a runaway truck ramp off of the freeway which appeared navigable. I didn’t love the spot, but I was well hidden. The ground was all rocks, so staking was really tough. I had to use any little patch of weeds to get them to stick. Photo from next morning: 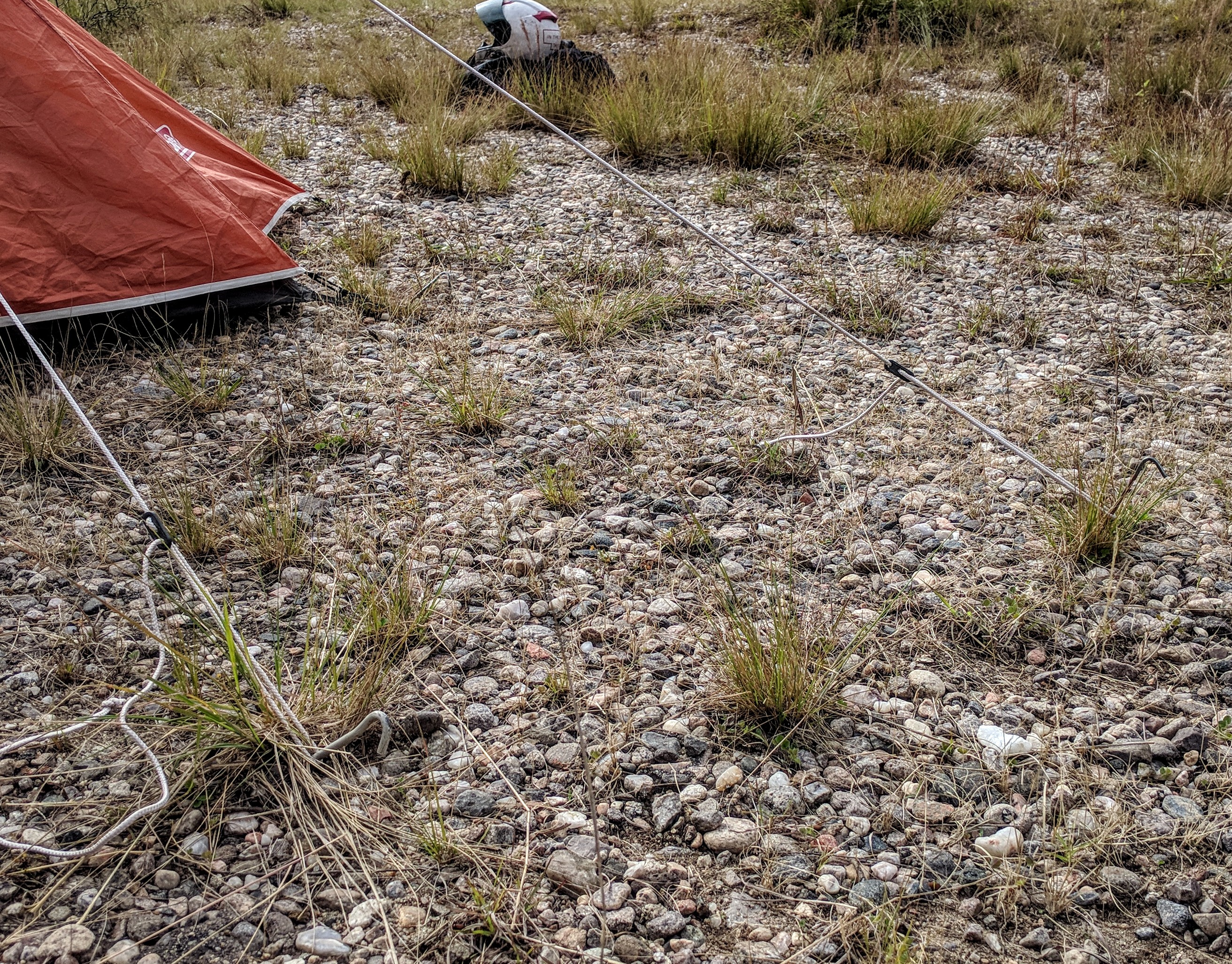 My maroon cocoon, a $50 Coleman tent, has served me well over the last year. However, I probably should have purchased a tent that was “free standing,” not needing to be staked to stay up. Oh well. Next trip….  🙂 I had a nice spaghetti supper and prepared for another chilly night. 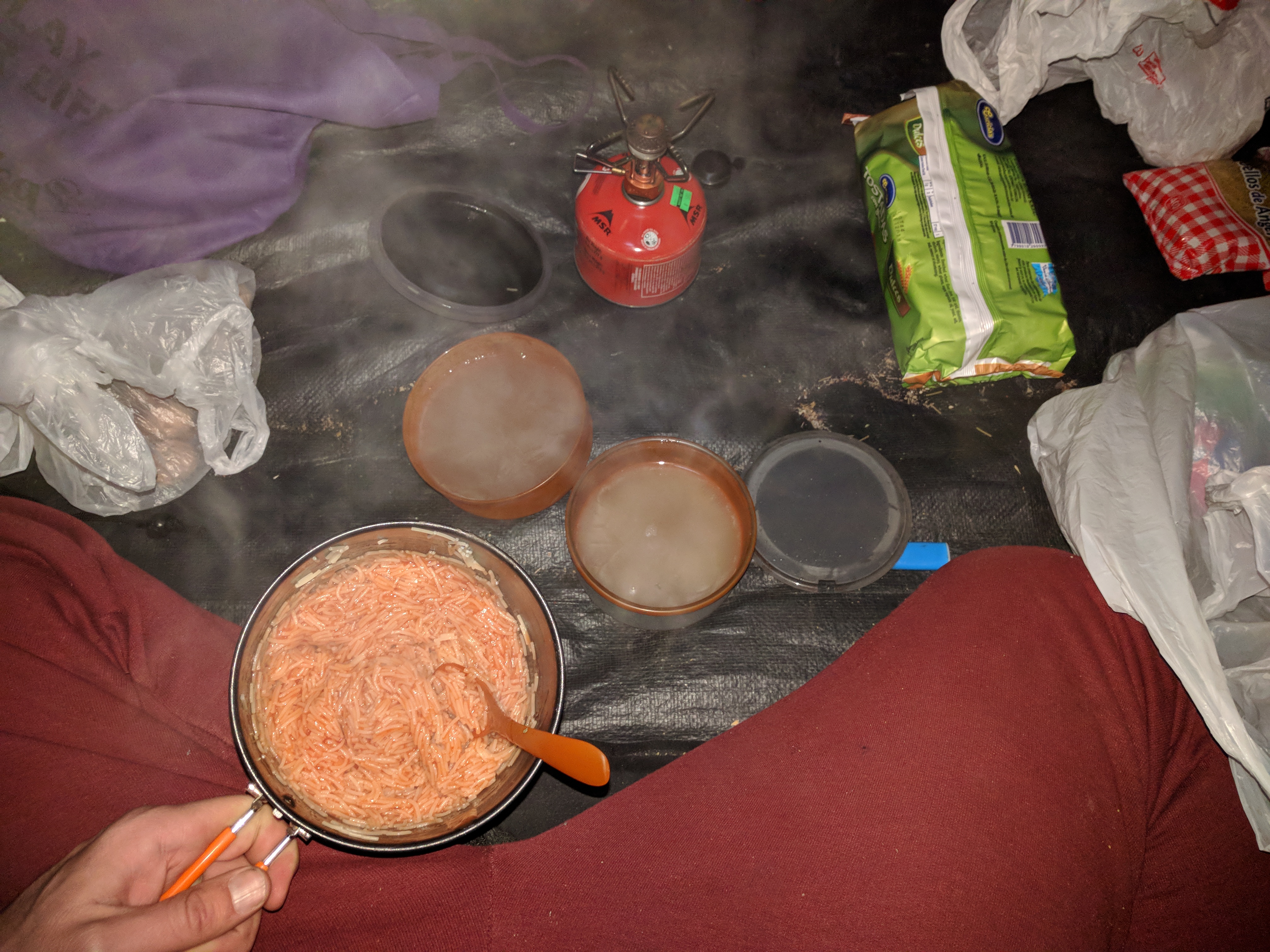 I woke up, rolled over and reached for my water bottle. To my relief, it was totally liquid. It hadn’t gotten below freezing. I actually stayed in this spot for awhile doing some writing. I knew I had a very short ride ahead. 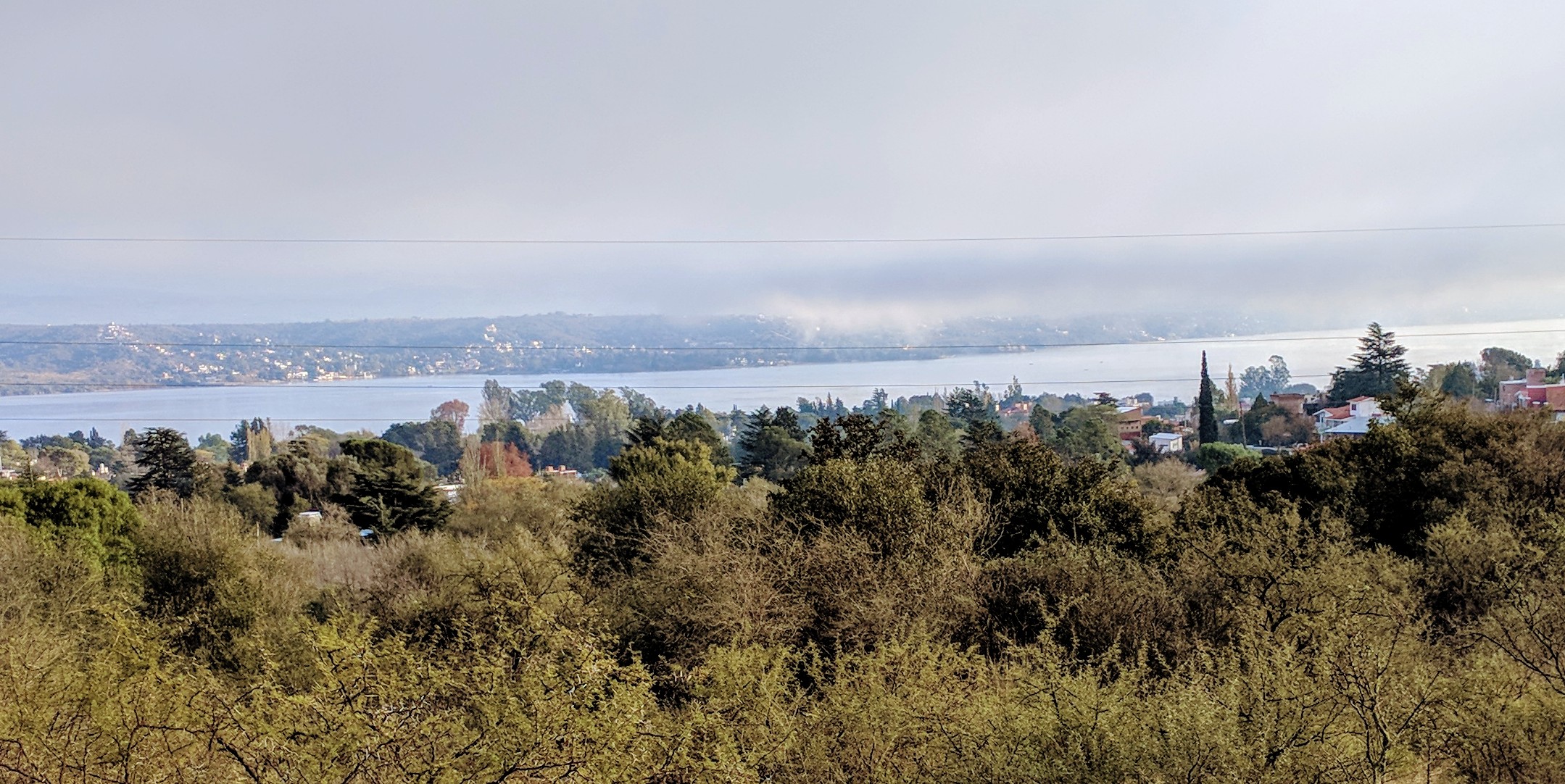 The height and length of this ramp was a bit unnecessary. By my rough calculations, a truck would have to be travelling at about twice the speed of sound to use the whole thing.

Rather thank continue, I think I’ll include Cordoba in my next update.

Other than the weather, Argentina continues to be very hospitable towards me. Despite being farther from home than I’ve ever been, things are almost starting to feel more familiar. I’ll expand on that next time.

Realtime update: I’m in Buenos Aires, enjoying this city. I may stay for a couple more days before heading to Uruguay.

14 thoughts on “Snow and Samwise”