My time on the plains of Argentina and the city of Cordoba was not very epic, but it was still special. In this episode, things start to get strangely familiar…

I had a very short ride to Córdoba. Somewhere along this stretch, Annie crossed 60,000 lifetime miles. She didn’t make a big deal about it, so I didn’t get a picture.

Something happened on the way which I don’t know if I can fully explain. As much as I’ve enjoyed the last five months, I have felt, almost perpetually, that I am somewhere unfamiliar. Many travelers before me have noted that the further south one goes in South America, the more it begins to resemble Europe or North America. I can definitely say this is true.

On this day I felt like the familiar began to outweigh the foreign.

It manifests itself in the little things that can easily go unnoticed:  Fewer stray dogs, homeless people with cell phones, people looking at watches while walking around,  tourism that is aimed at locals rather than foreigners, people fishing for fun rather than food, occasional use of turn signals….

As much as I’d like to deny it, I think the racial element contributed to this feeling as well. After months of sticking out like the proverbial sore thumb, I was now more akin to a pinky with a hangnail.

I made it to Córdoba and took up residence in the first hostel I came to, Aldea Hostel. It was $9/night. They didn’t have parking, per se, but Annie just fit in the entryway. 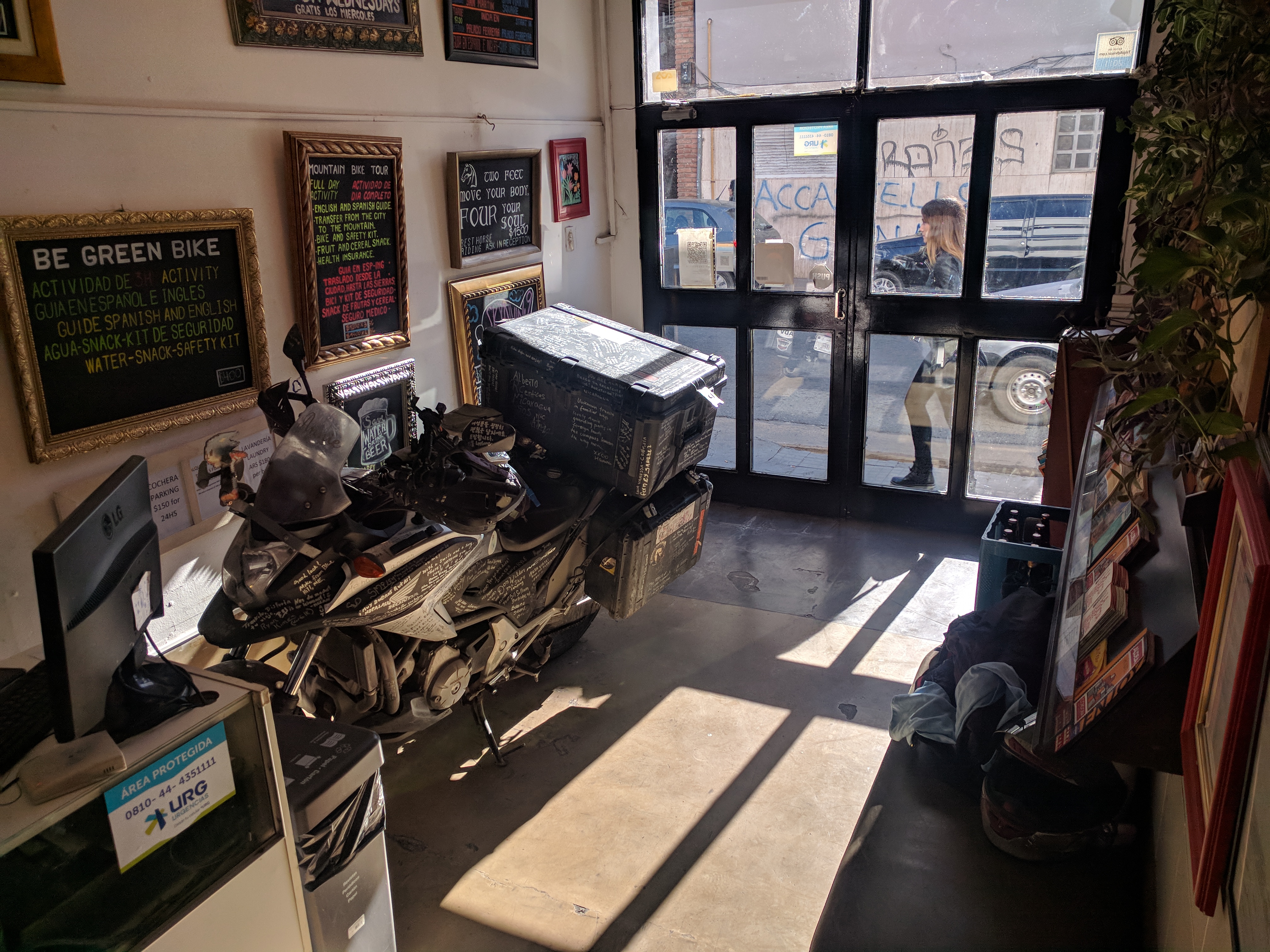 Córdoba is the second largest city in Argentina and it lies right in the middle of the vast country. It is a college town, both in the classical and traditional sense. The first university here was founded in 1613. The educational institutions attract people from all over the world, making Córdoba one of the most diverse cities in Latin America.

I didn’t get out too much my first day here. There was heater right next to my bed in the dormitory. It felt really good to be warm again. 🙂

One of my roommates was a nurse from Venezuela. It was hard to hear her story about having to leave the country and the profession that she loves. Without further certification, she is not able to work in her field in other countries. I have been constantly reminded of the crisis there as I’ve traveled South America.

I had a productive day, but didn’t really take any media. As such…I’ll just move on.

I rode around the city a little bit, dropped off my laundry and recorded the video for “Anniversary and Announcement” in one of the many parks.

The first time somebody suggested lane-splitting to me (Mitch, in New York), I think my response was something like, “I can’t do that! I’m a Christian!” By now, it’s just become second-nature. I may have a hard time not doing it once I return to the US.

One of my favorite sights in Córdoba was this skinny building. 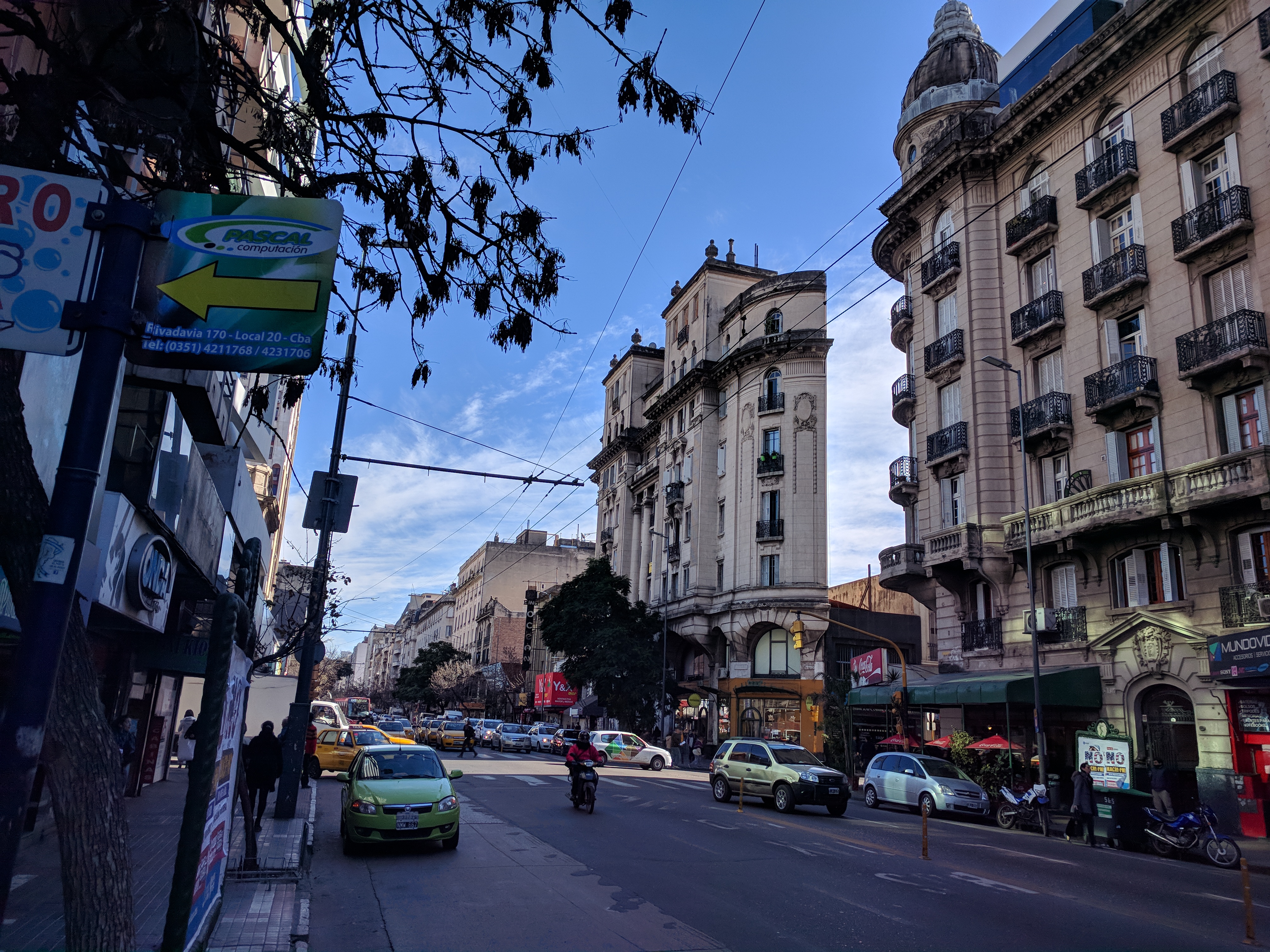 It originated as a feud between brothers, when one of them wouldn’t sell the adjacent lot to the other. He decided to construct the building anyway. It is only about 10 ft (3.2m) thick at its widest point. 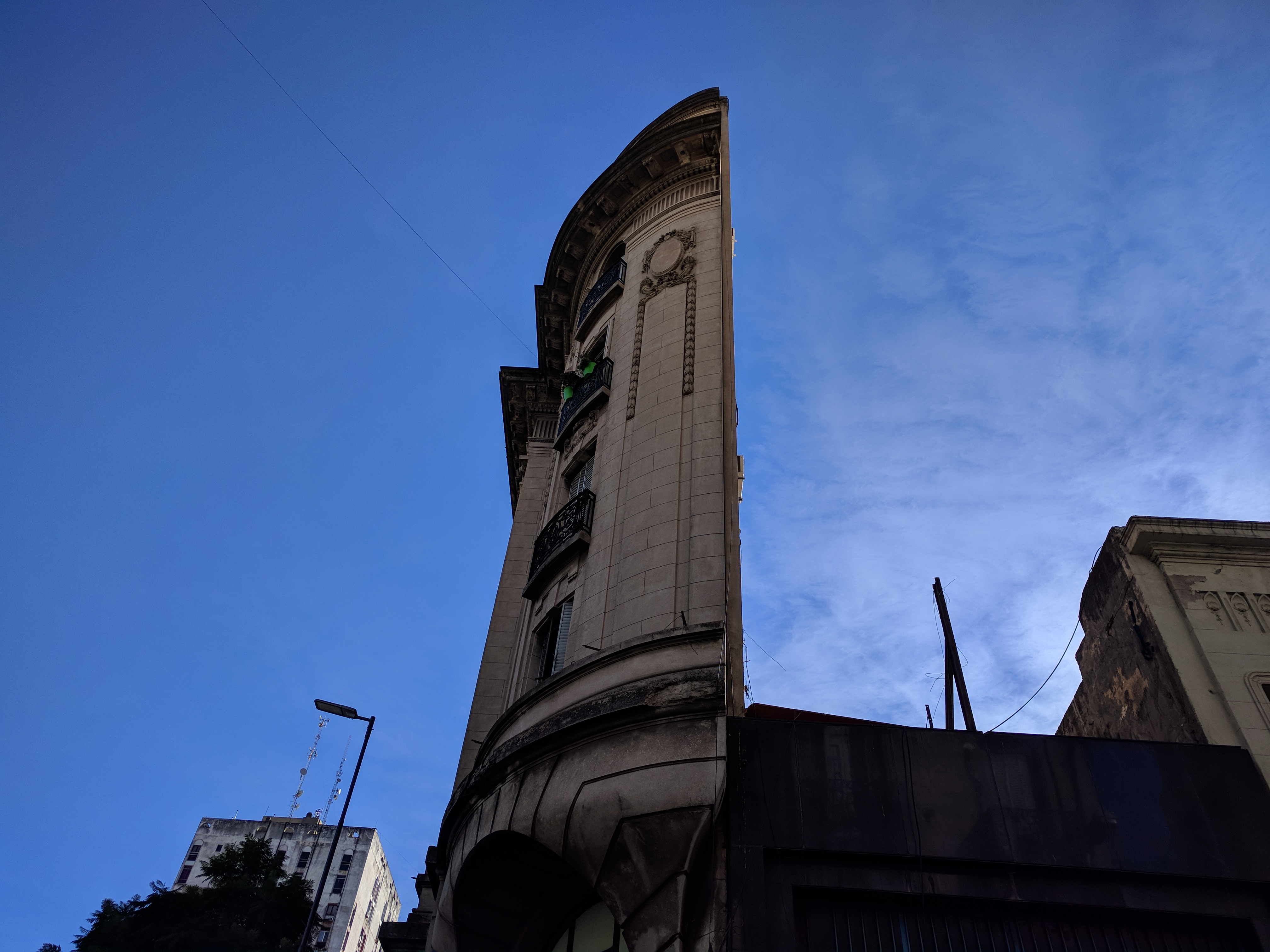 One thing that I’ve found interesting in my travels in Latin America, is how all of the hostels seem like they are trying to “out-English” each other….like the more English you have around, the cooler you are. 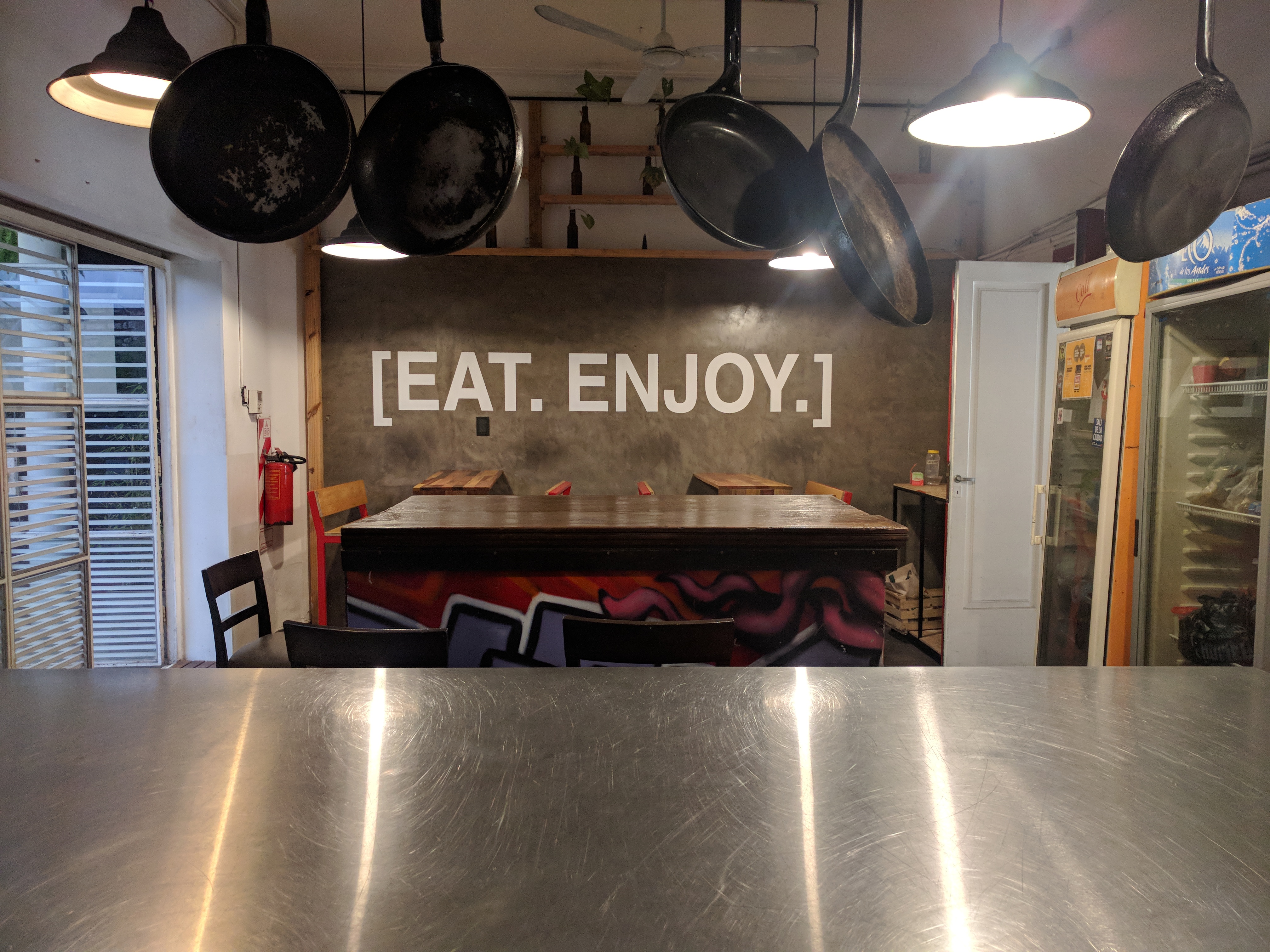 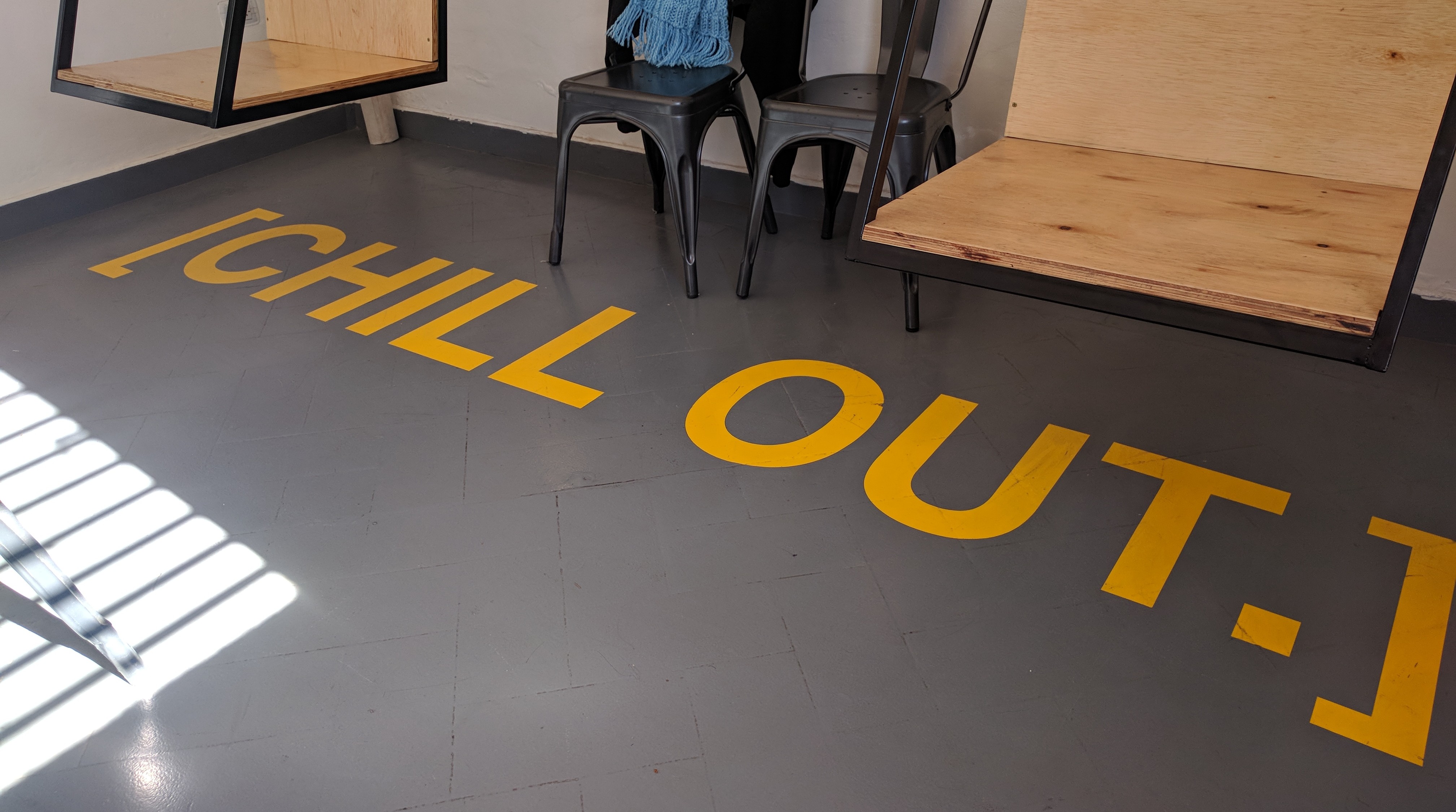 I was able to obtain a difficult to find supply this day: A new canister for my camping stove. 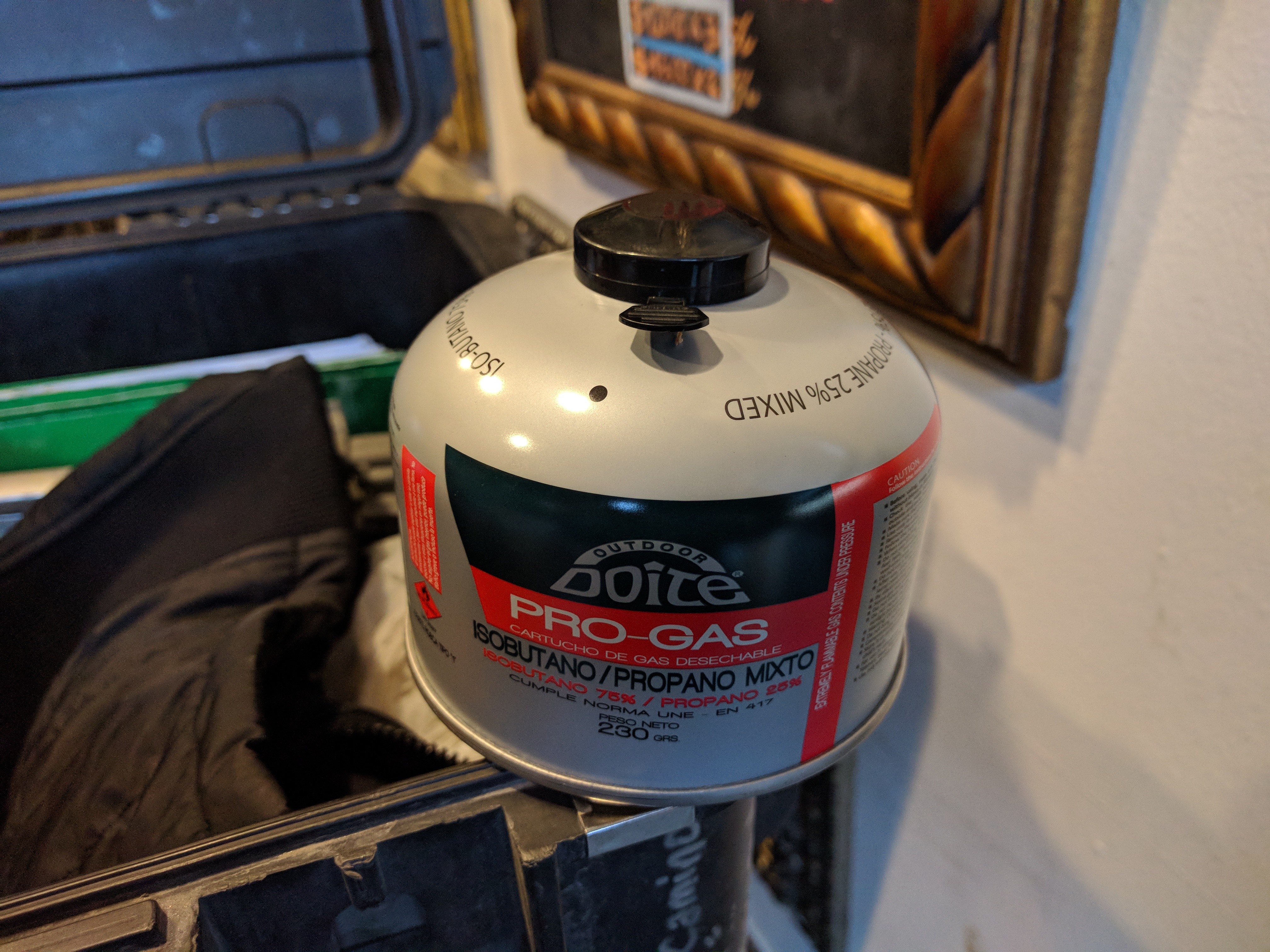 I’ve really gone easy on the one I brought from the US, so I’m glad I’ve been able to replace it here.

Having focused on business the previous days, I was ready to really see the city. I went on an English-spoken walking tour with a small group of others, mostly Europeans. This provided a great orientation of the town. 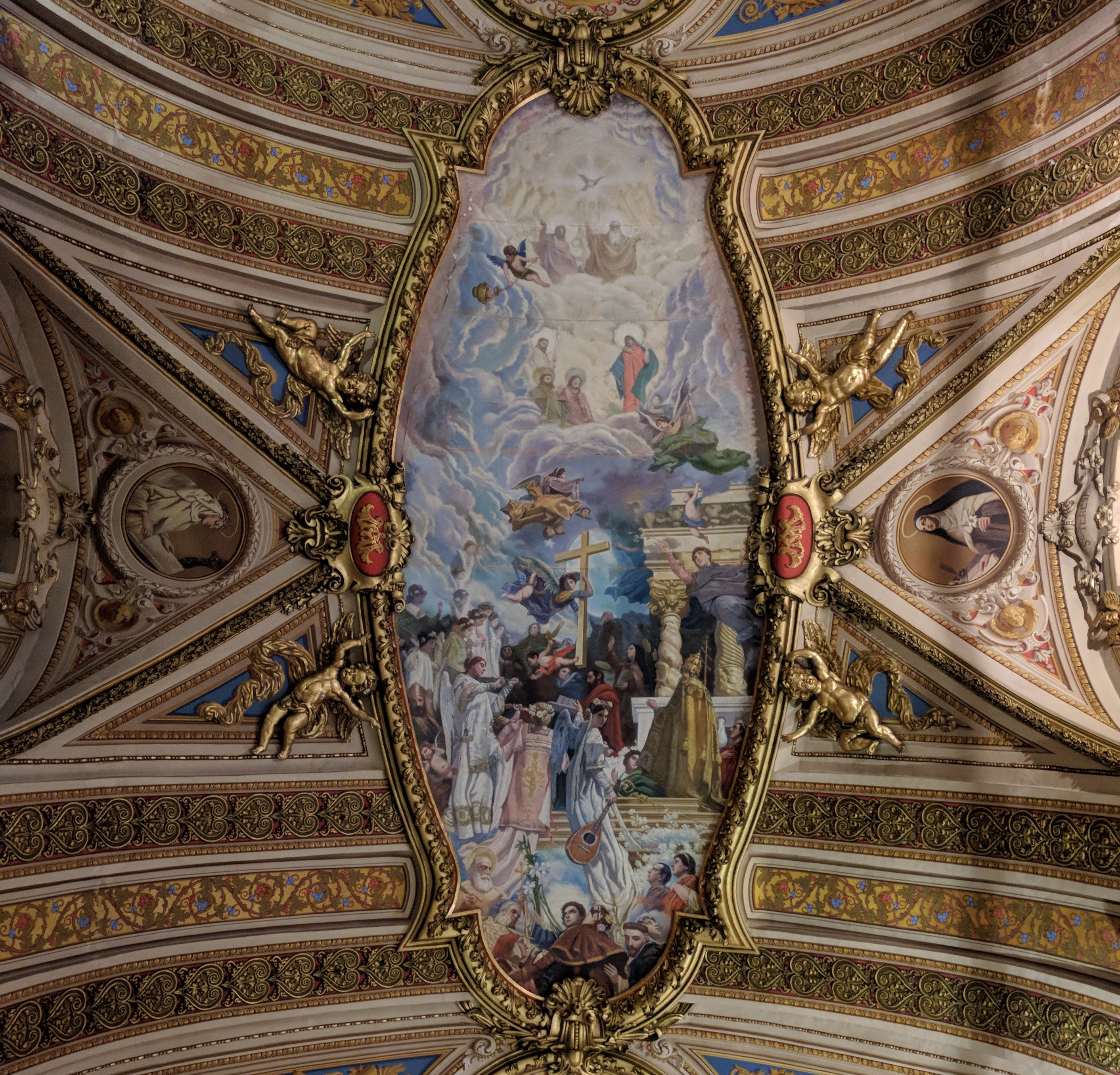 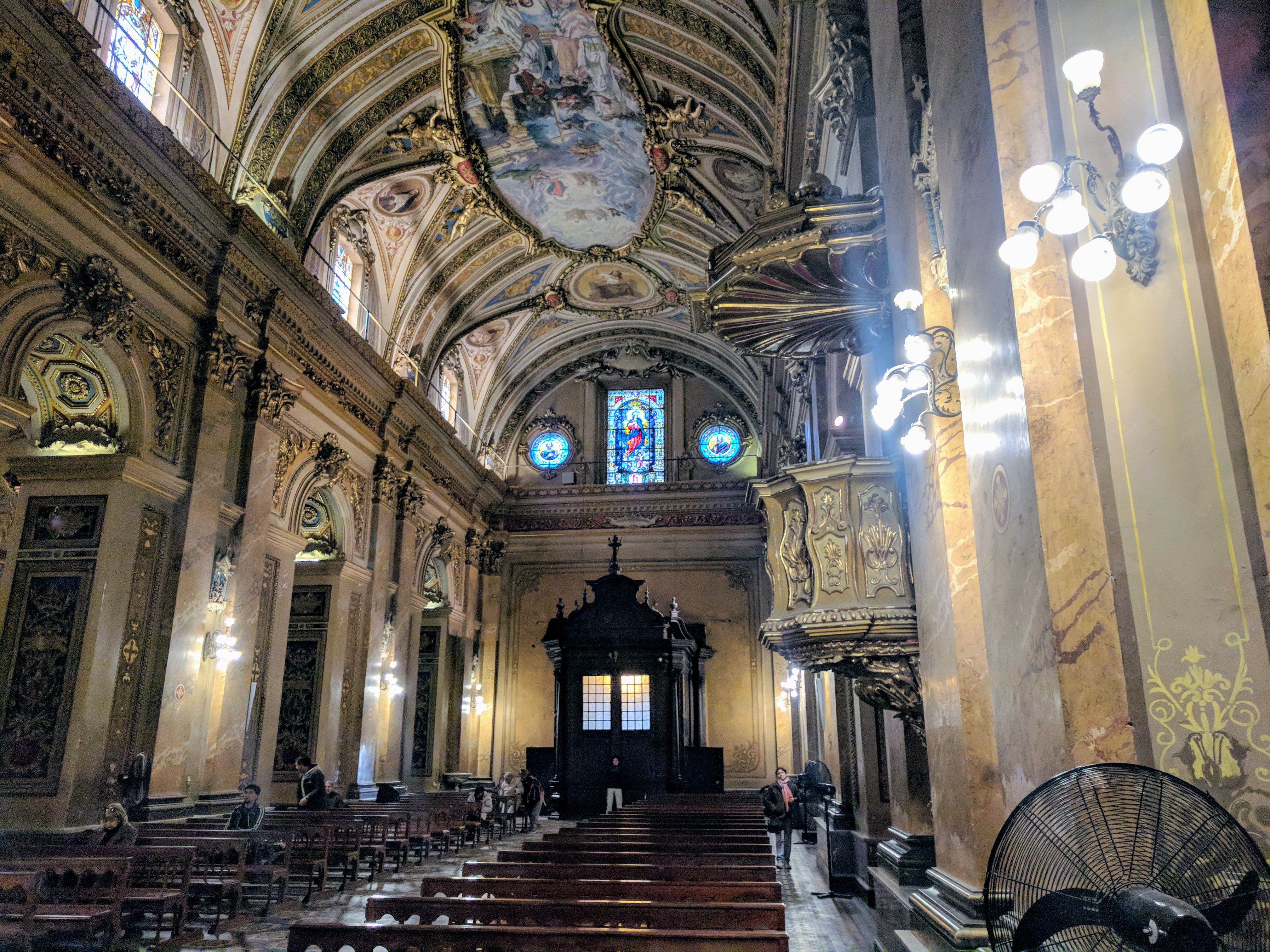 In the 1980s, a local artist became frustrated by watching all of the people walking around with their eyes down despite the incredible architecture that surrounded them. He began a project to create “reflections” of many of the notable buildings on the ground in white stone. 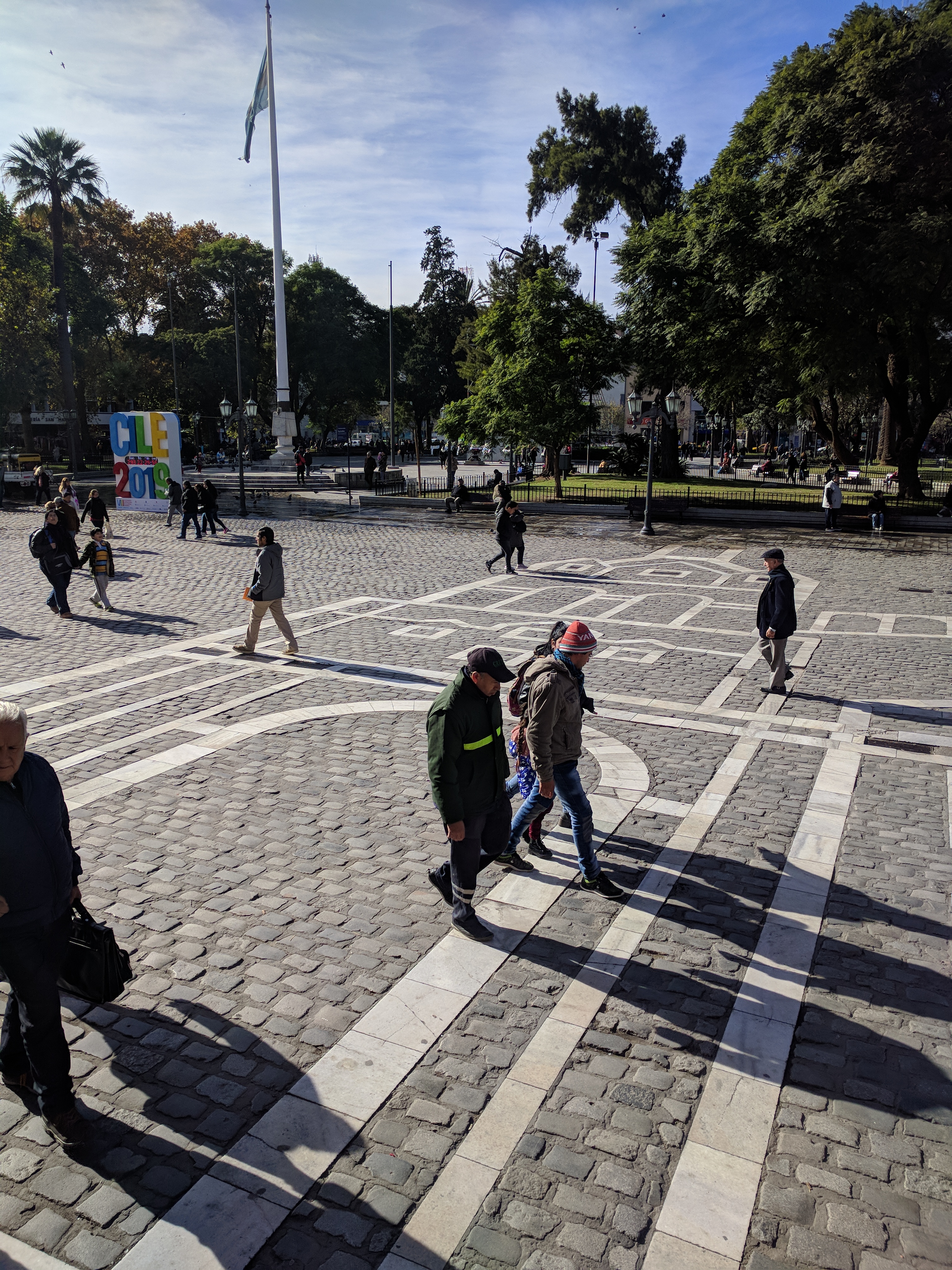 Inside the “Museum of Memories” which sheds light upon Argentina’s time under cruel dictatorship. (as recently as the early 80s). Portraits of the disappeared: 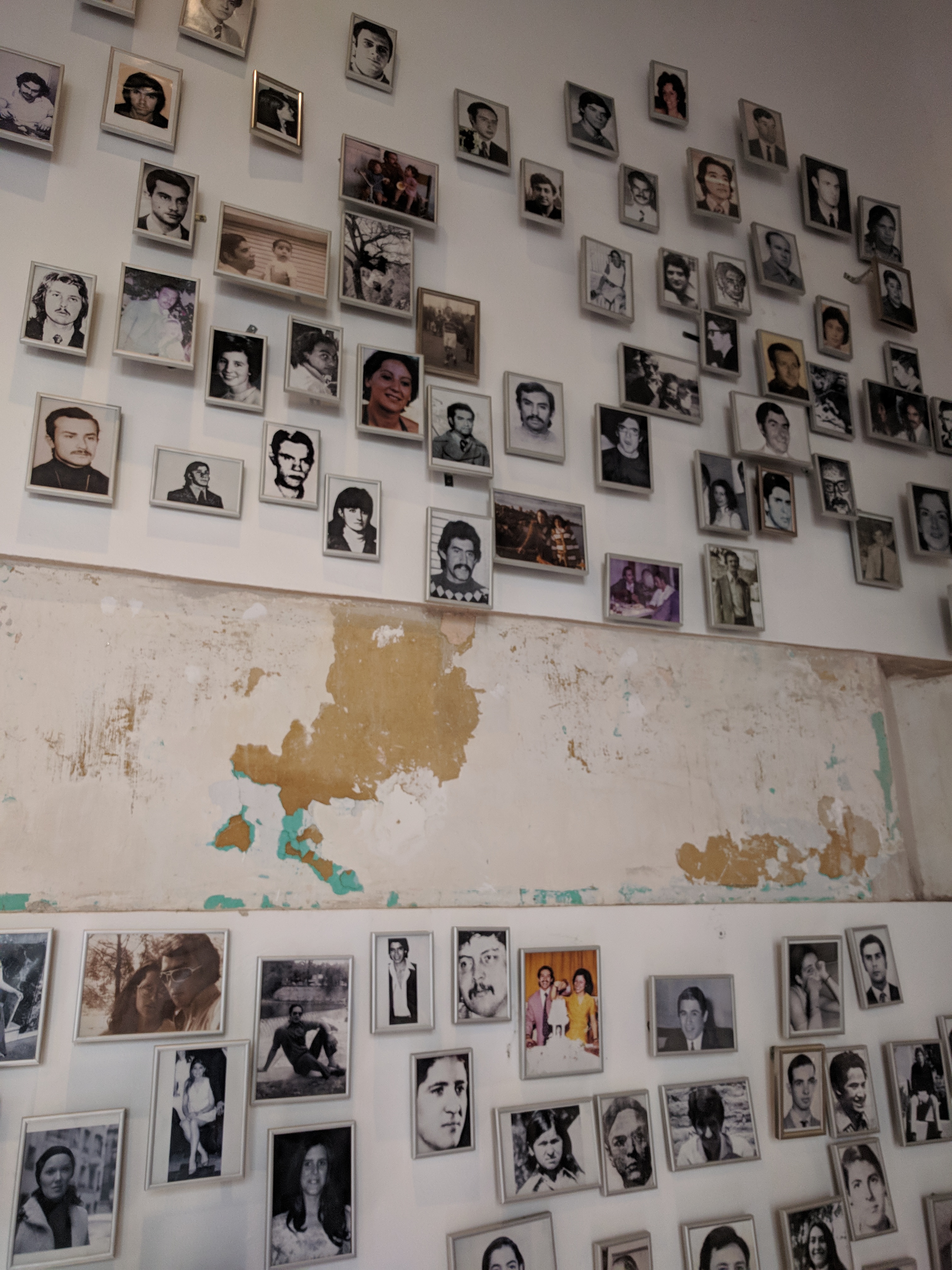 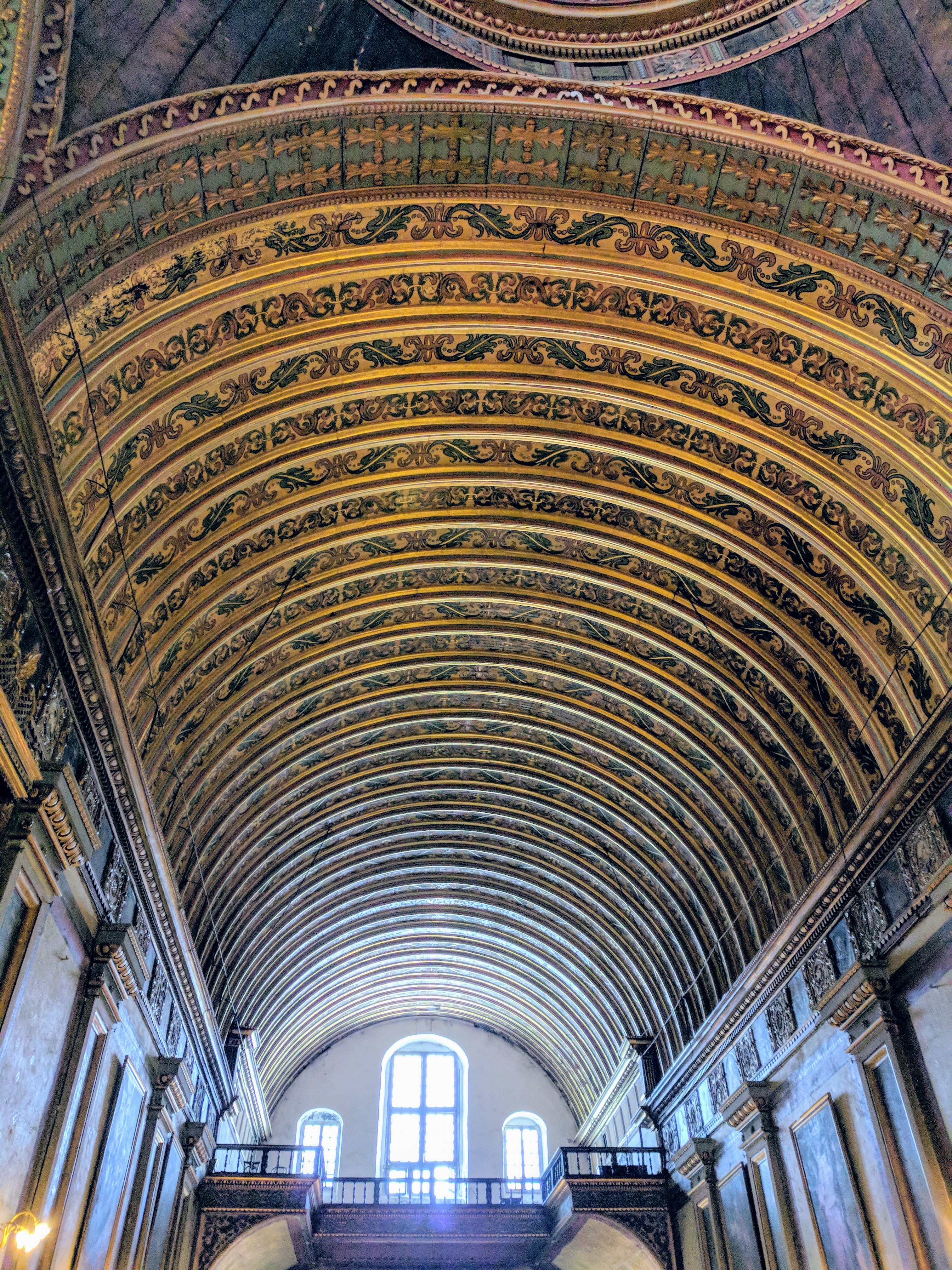 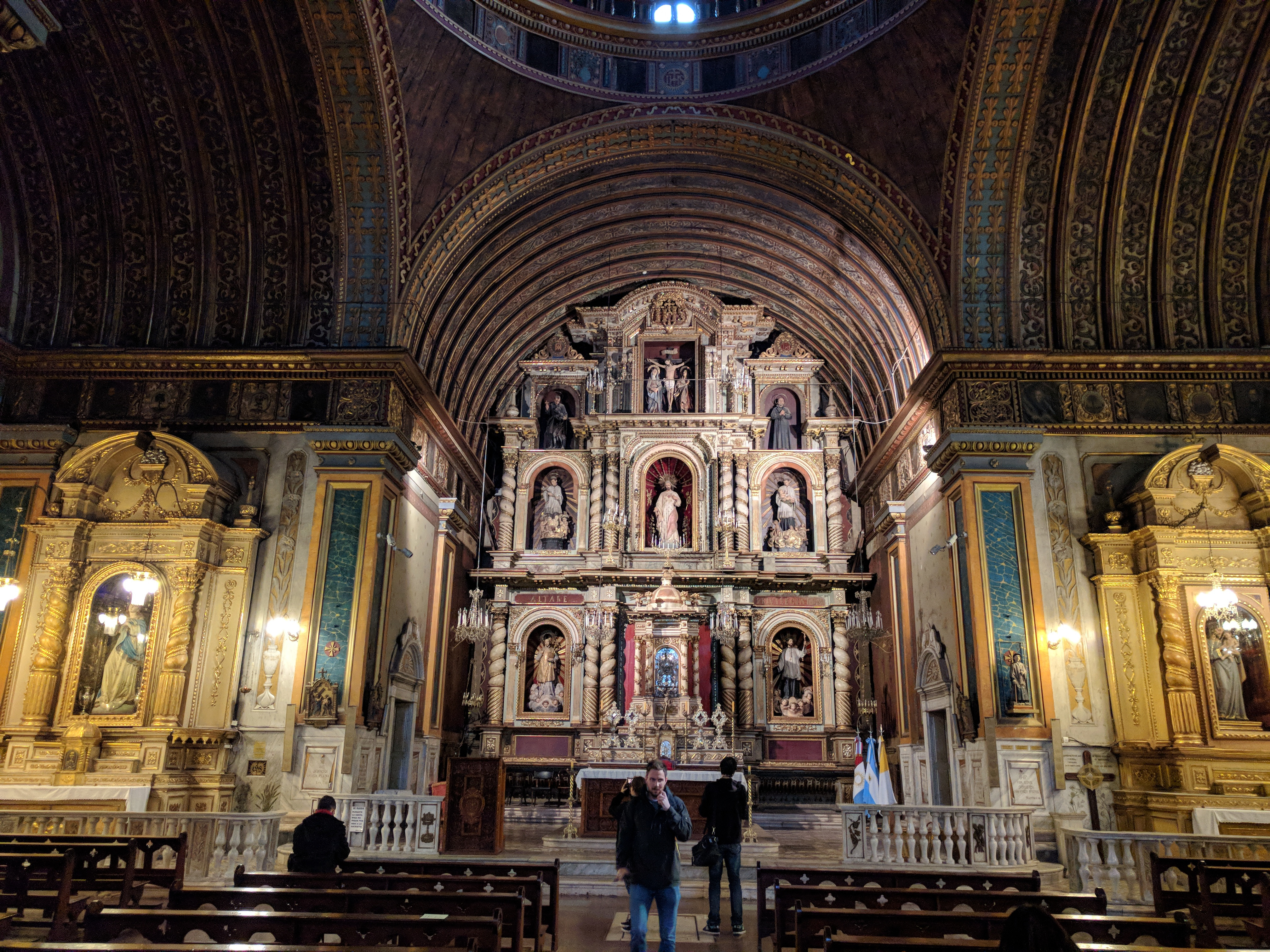 I ventured further south after the tour. I promise this is the last church picture in the post. The Capuchin Church: 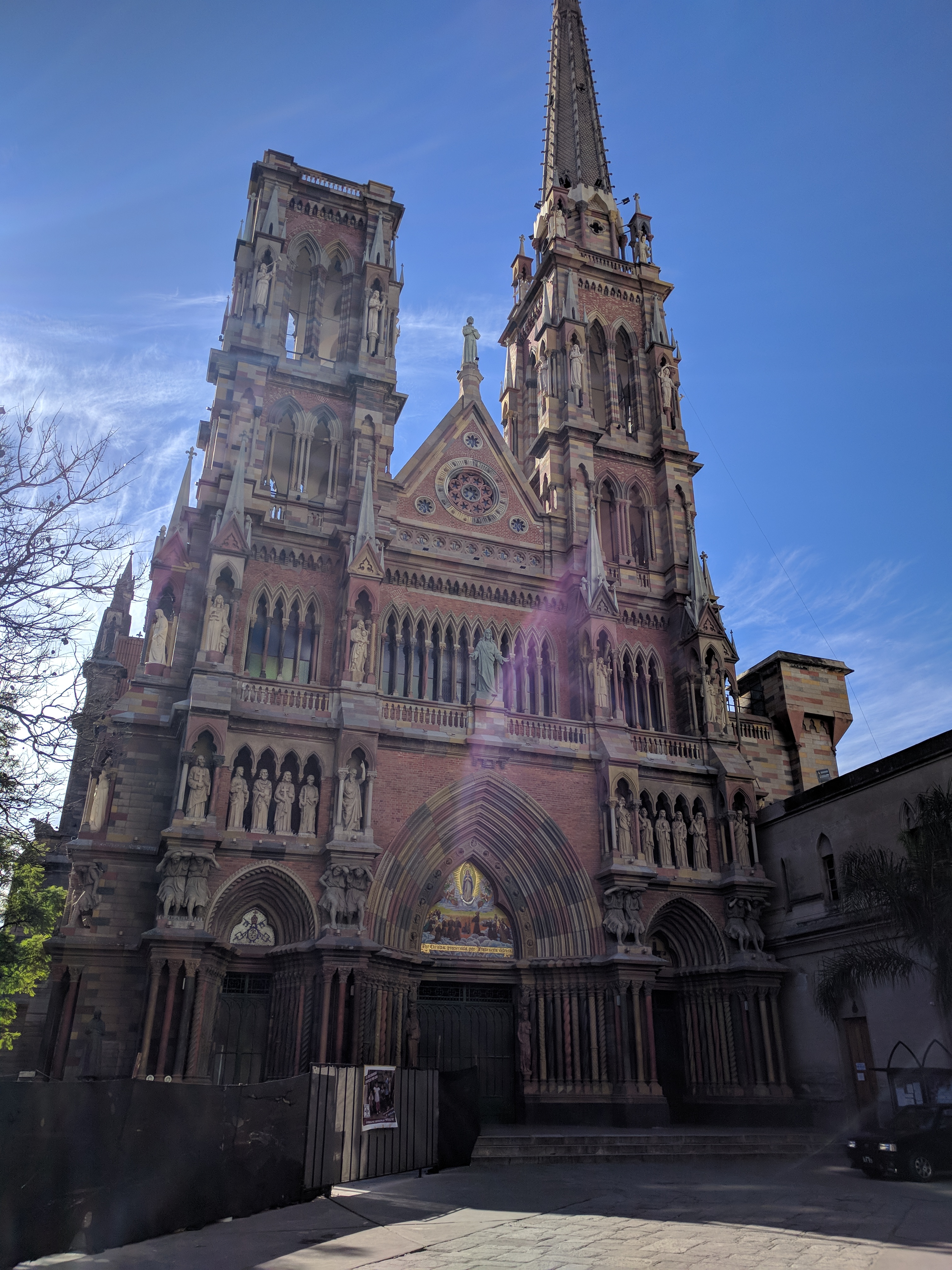 I decided to check out the museum of natural science. I was pretty proud of myself that I was coming on the day when the museums were free, but the entrance was only about 60 cents otherwise. It was a well done museum. 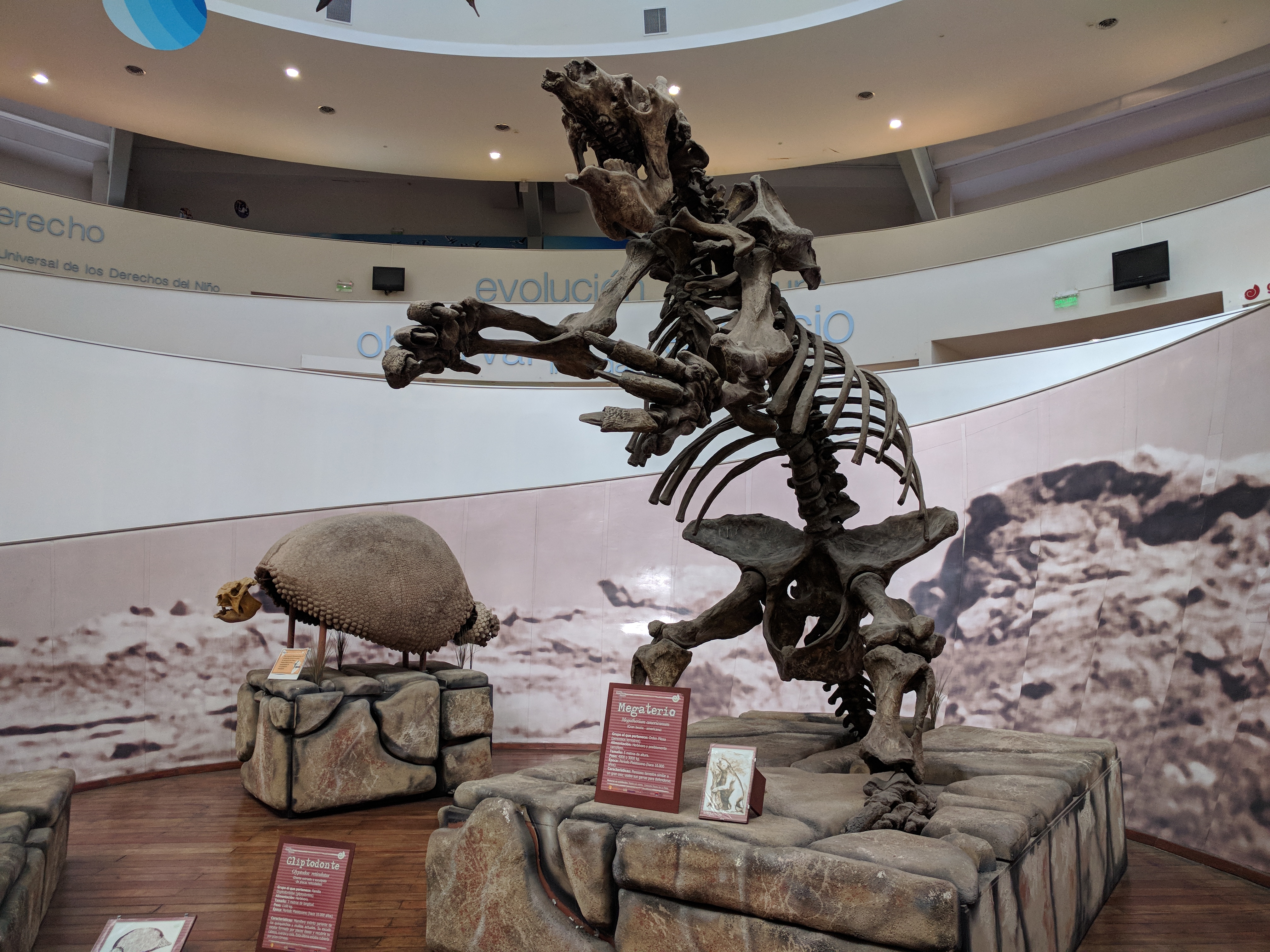 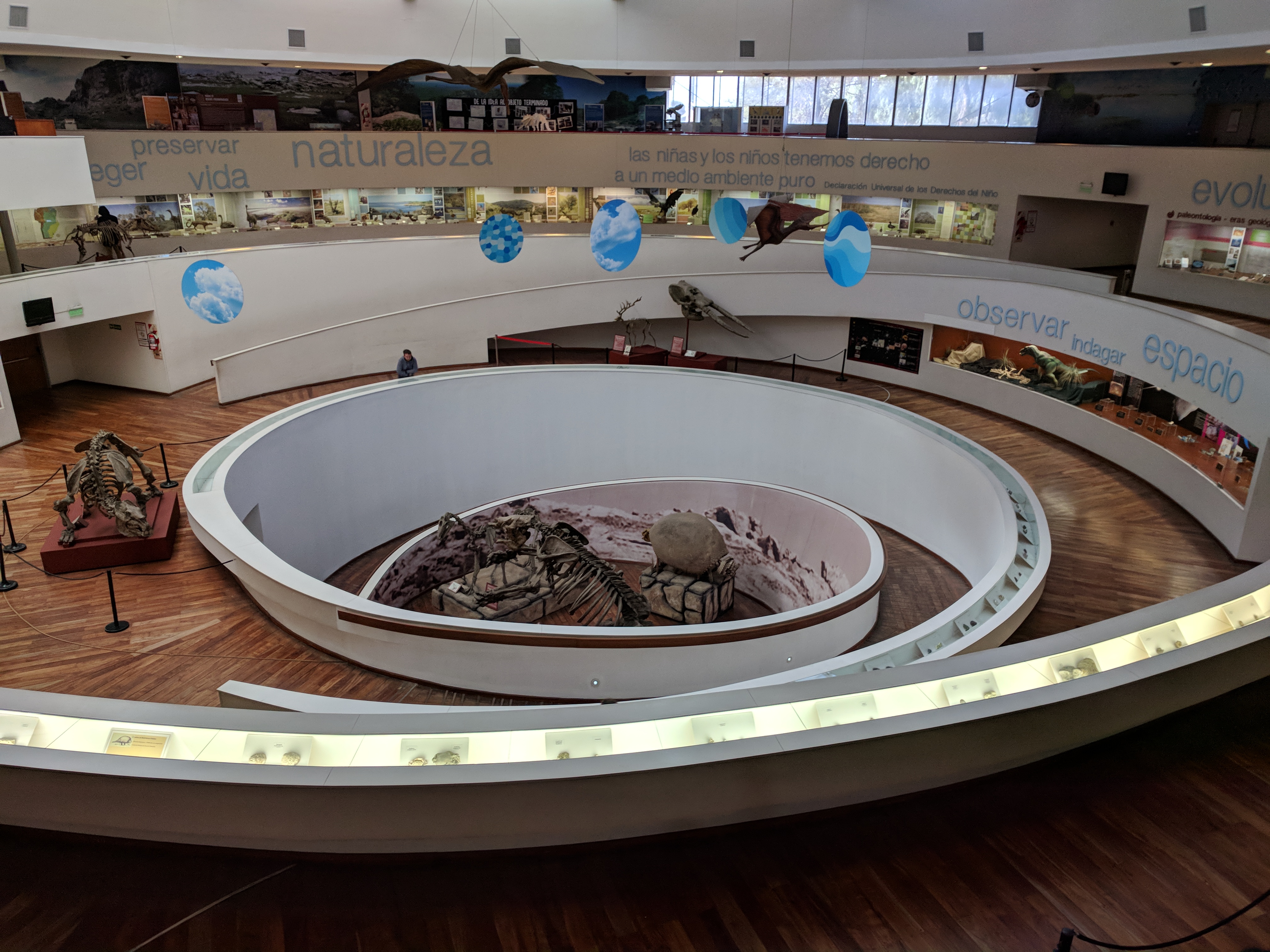 The fossils found in this part of the world weren’t reptilian dinosaurs, but rather mammalian “Megafauna”(which just sounds awesome) from a much more recent time period .

I spent most of the evening getting ready to depart the next day.

I had some more fun connections this morning. A guy named Gerardo had checked me in, but I hadn’t asked him where he was from. It turns out that he was from song place 54: Monterrey, Mexico. He was a fan of the soccer club Tigres and really excited to find out that I actually had a Tigres scarf with me. He went and put his jersey on so we could take some pictures. 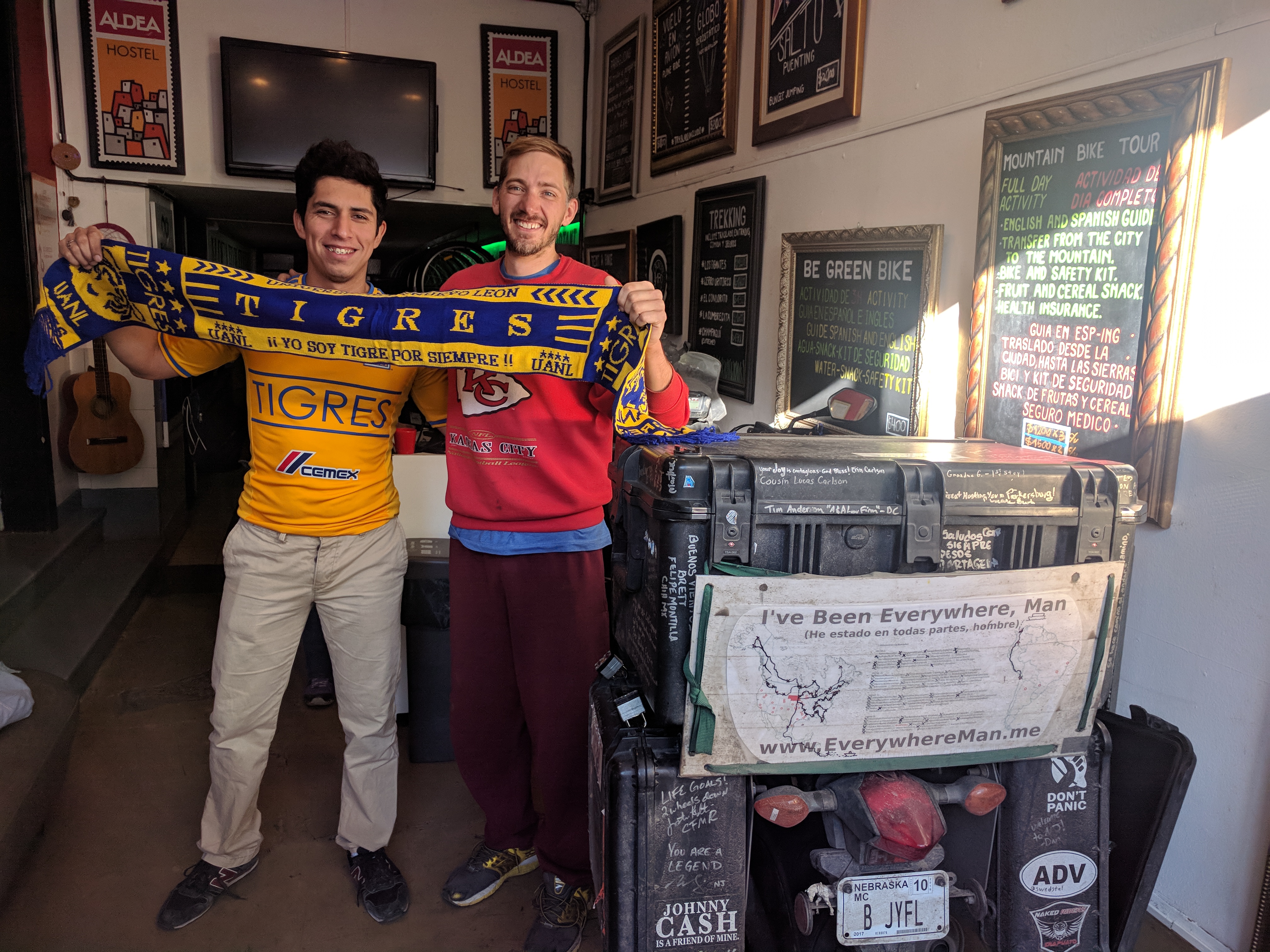 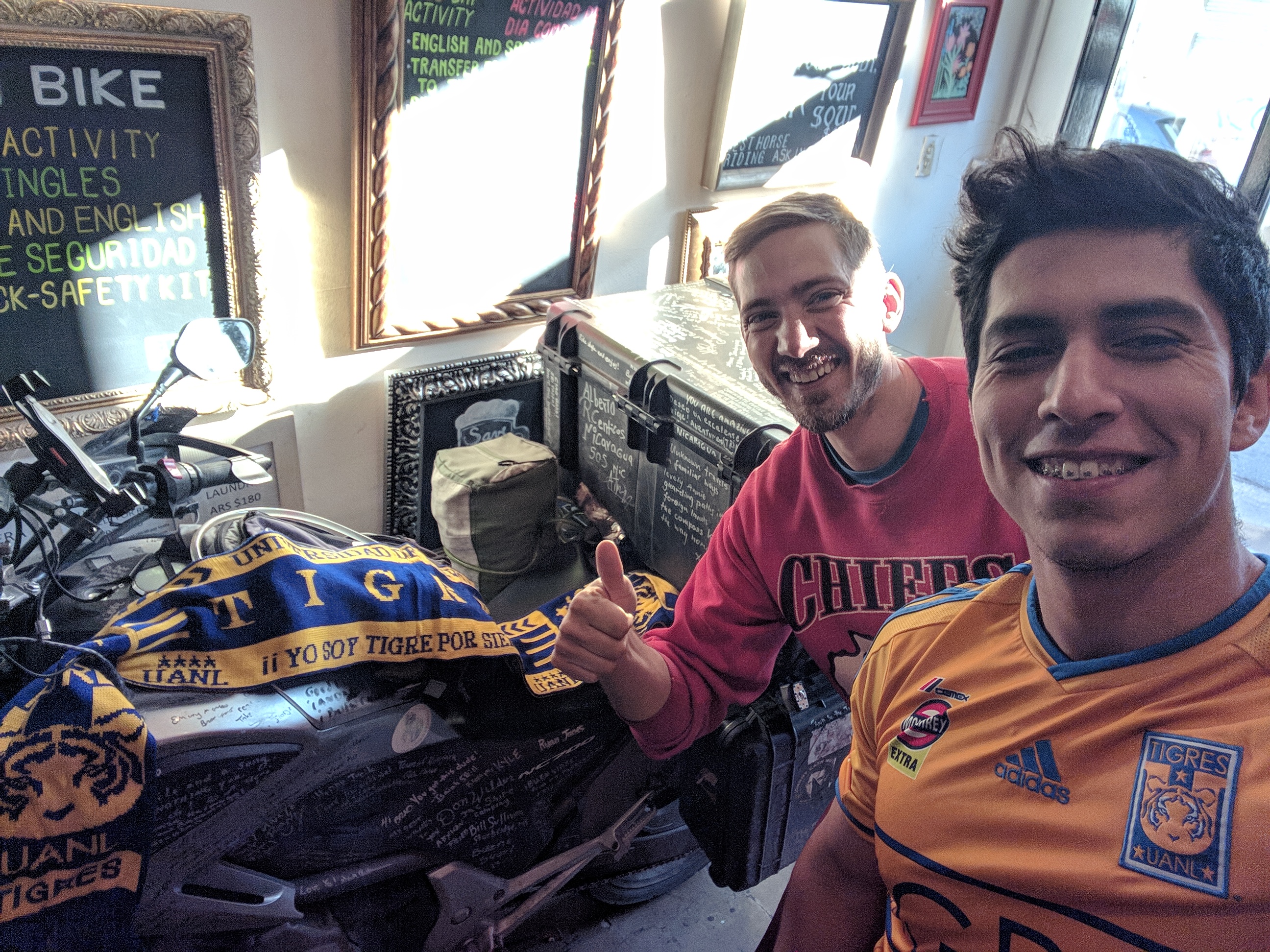 I also met a guy from France who was riding his bicycle around the continent. He had ridden through Venezuela and acted like it was no big deal. I have never claimed to be completely sane, but it’s always nice to meet someone who is unequivocally crazier than you. 🙂

My next stop would be Buenos Aires. I decided to take two days to reach there:

I tried hard to see if there was a scenic route, but the helpful lady at the hostel said it was just fields whichever way I went. That actually sounded kind of nice. 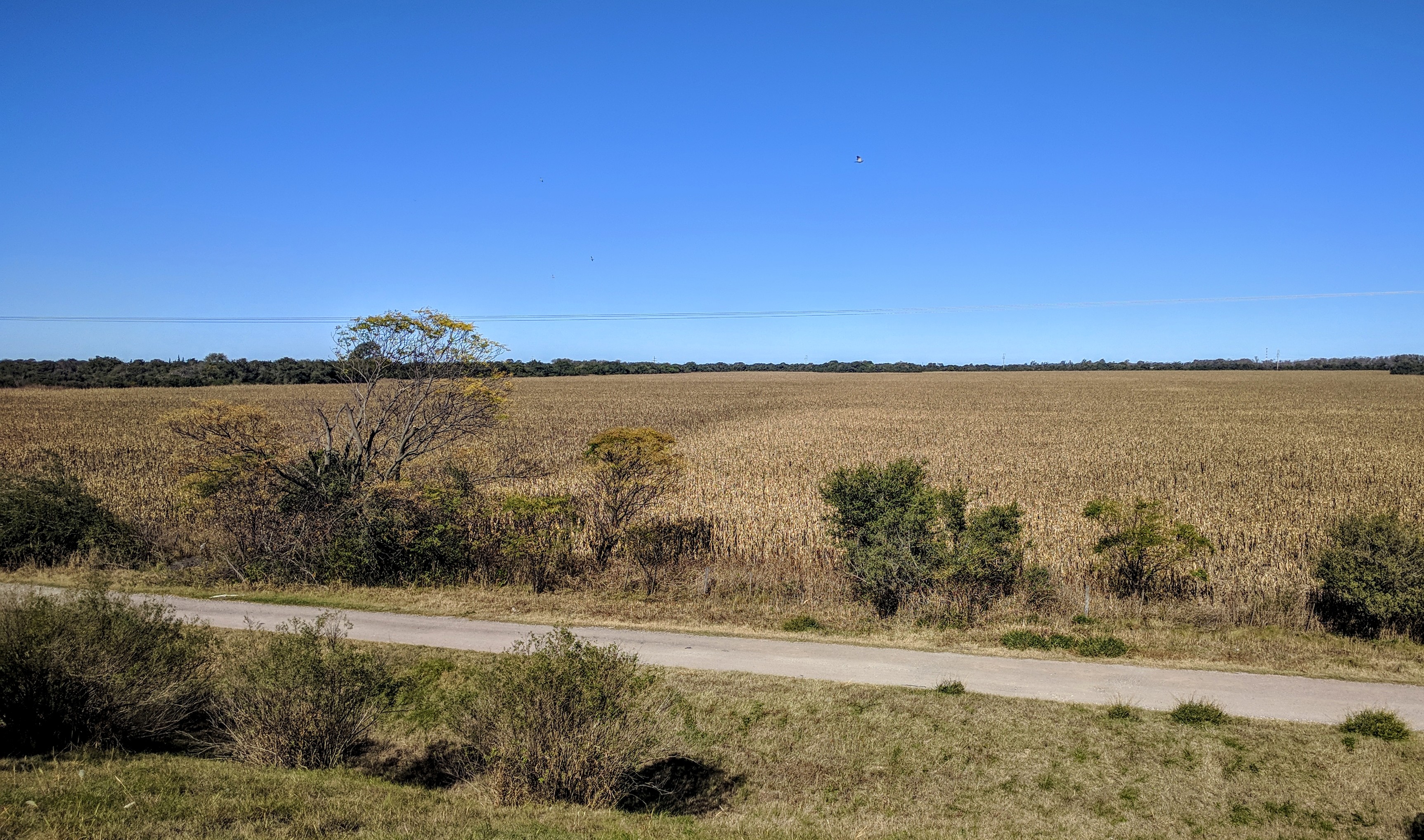 I had sort of a strange moment on this stretch of road, where I almost felt that I had been transported back home. Suddenly, I was westbound on I-80 in early November, with the lazy, late Autumn sun hanging low to my left. Half of the corn fields were harvested, half were just about ready. The flat, fertile countryside stretched as far as the eye could see. The air was right on the border between crisp and cold. It felt so familiar.

I think I kind of miss the plains. 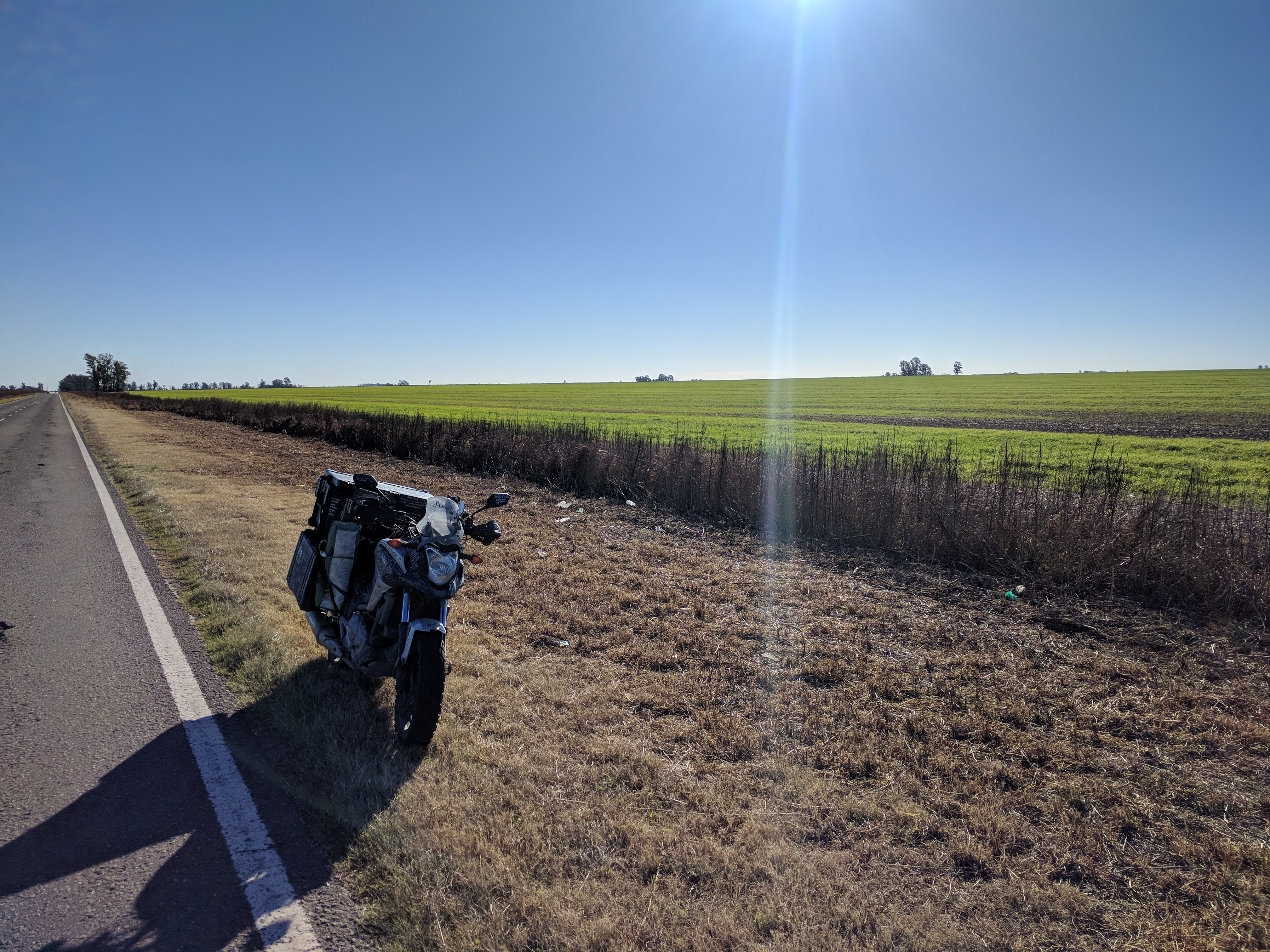 I had the opportunity to cross off a song place today, as I was fairly close to Santa Fe, Argentina. It could be argued that this location is more notable than the one in New Mexico, as it certainly is more populous. I decided to stick with the New Mexico location. 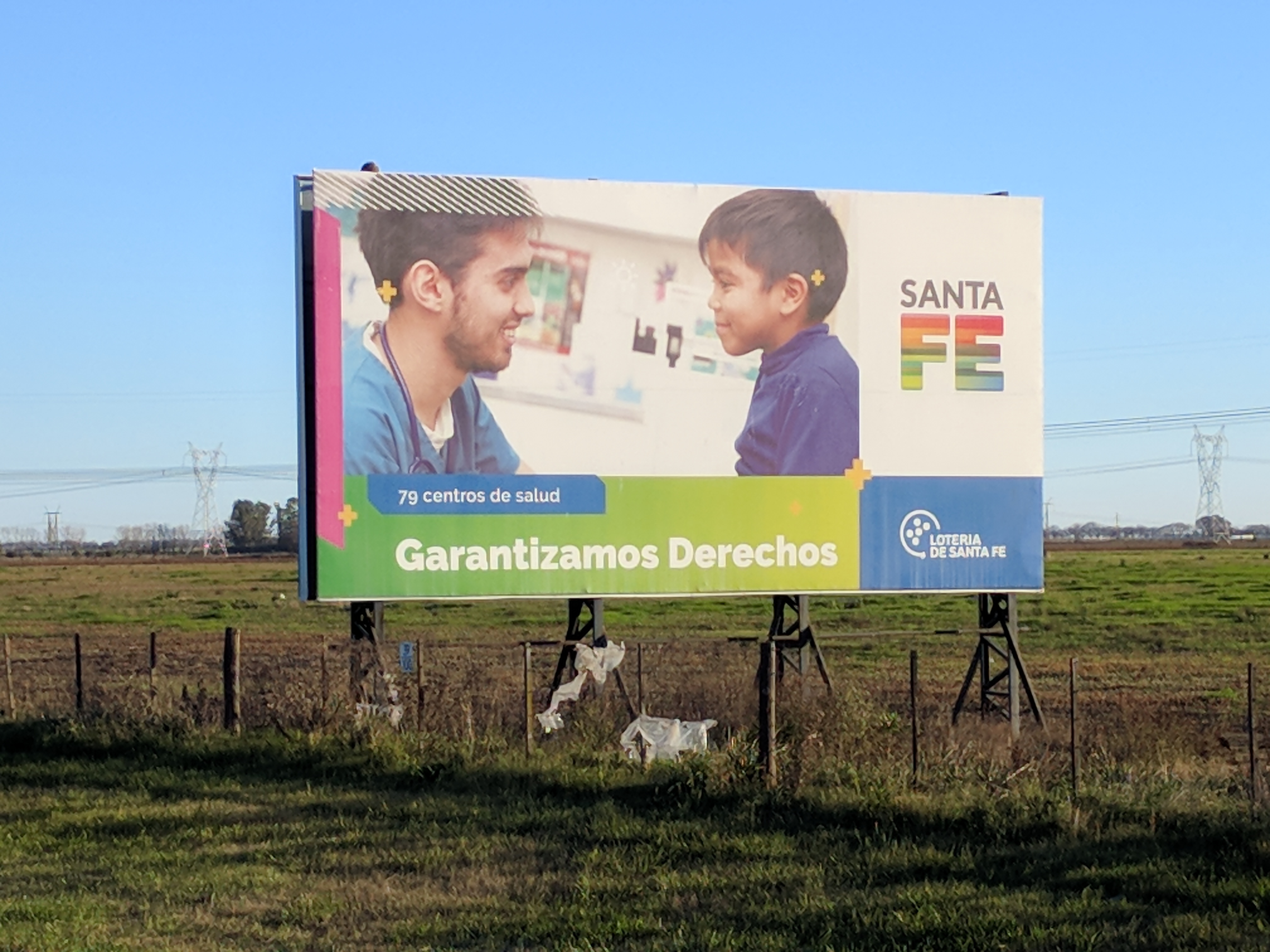 The sunset caught me a little off guard (usually happens when I’m traveling east). I settled on a less than ideal spot alongside some abandoned railroad tracks. I could tell that locals still used the route and a couple of bicycles went by as I was setting up. 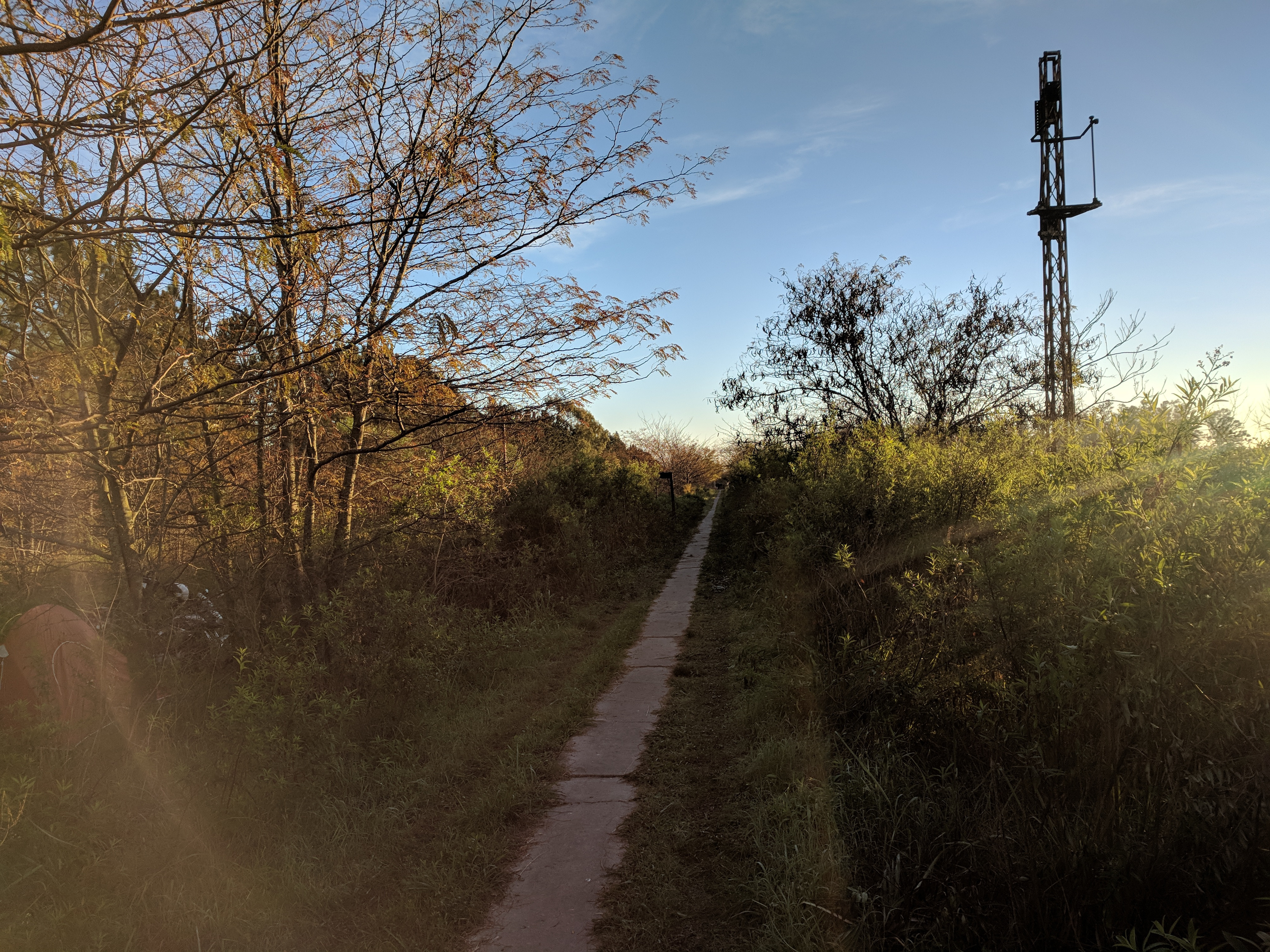 As I packed up in the morning, I was “discovered” by a couple of passerbys. They seemed a little surprised to see me and just asked if I was OK. 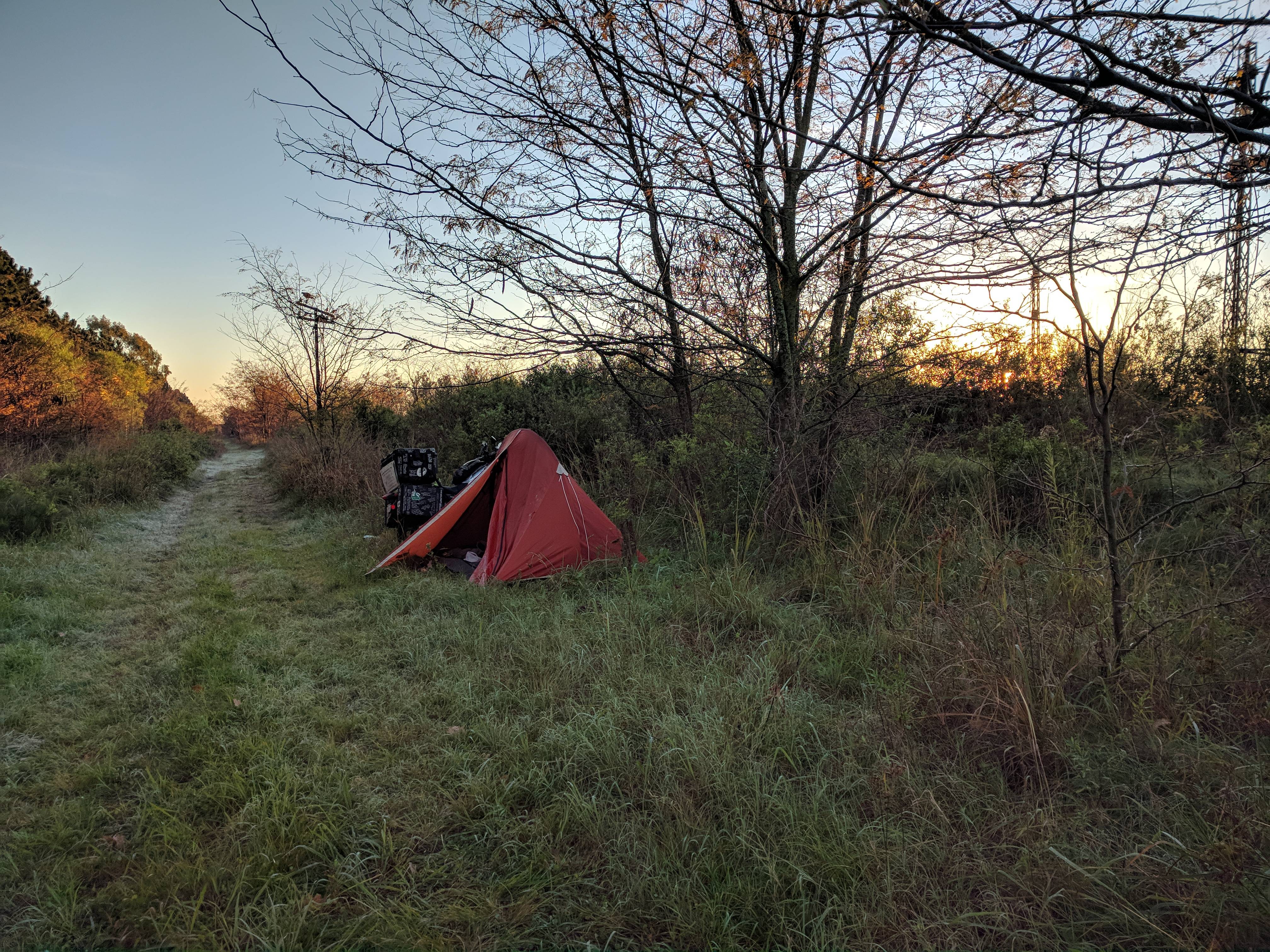 My ride into Buenos Aires was exciting in a few stretches. The traffic was dense, but the roads were sufficient.

I felt very satisfied to be in the city with the best initials in the world. 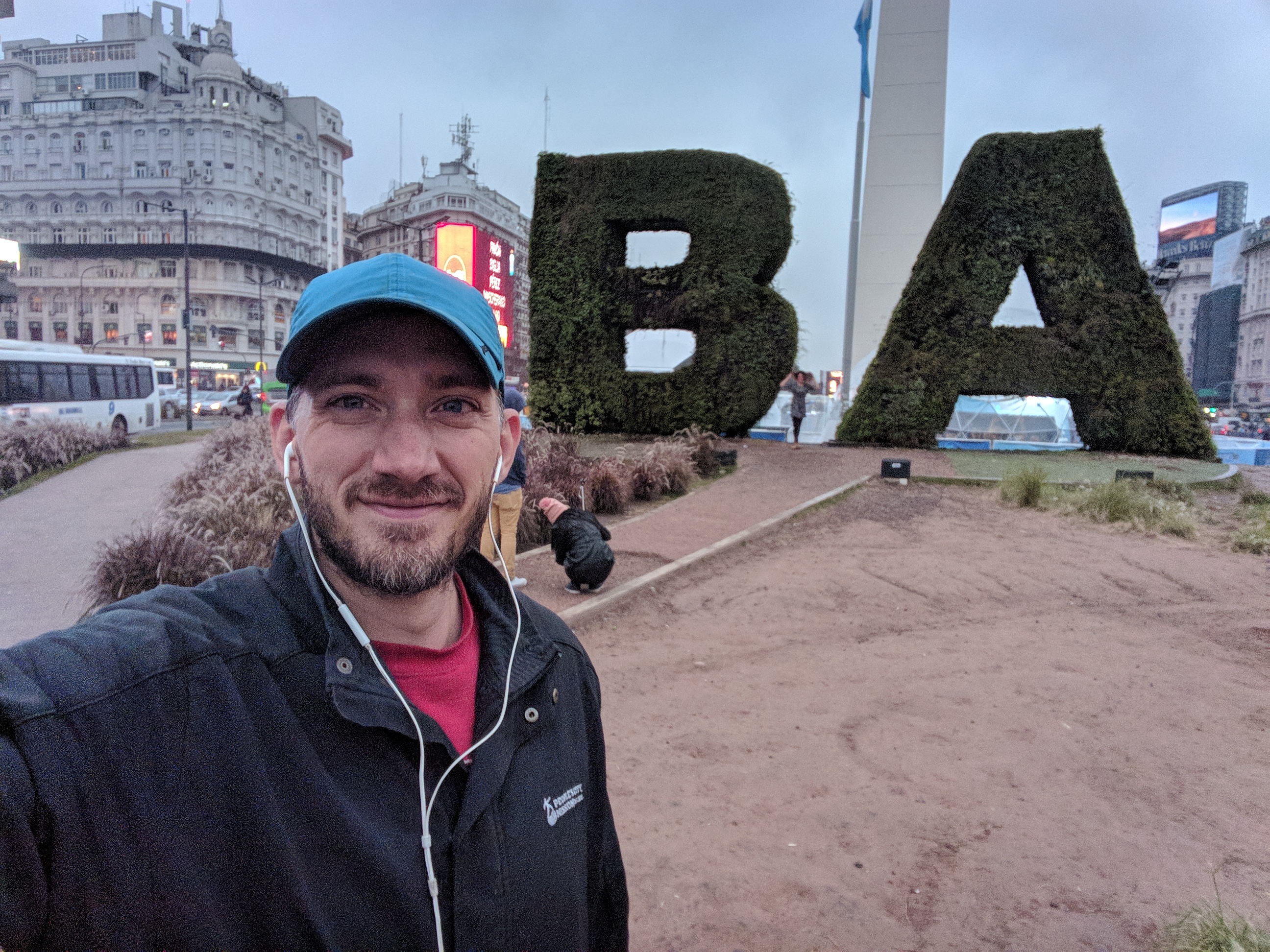 I think I’ll leave it there for now. I’ll write about my time in Buenos Aires in the next post.

Realtime update: Yeahh……so I kind of got into vacation mode, just hanging out and watching soccer. 🙂 I worked very little during my time in Buenos Aires so I’m a bit behind now. I currently find myself in Montevideo, Uruguay. I’ll stay one more night before getting to my next song place: La Paloma.

8 thoughts on “Peace on the Plains”